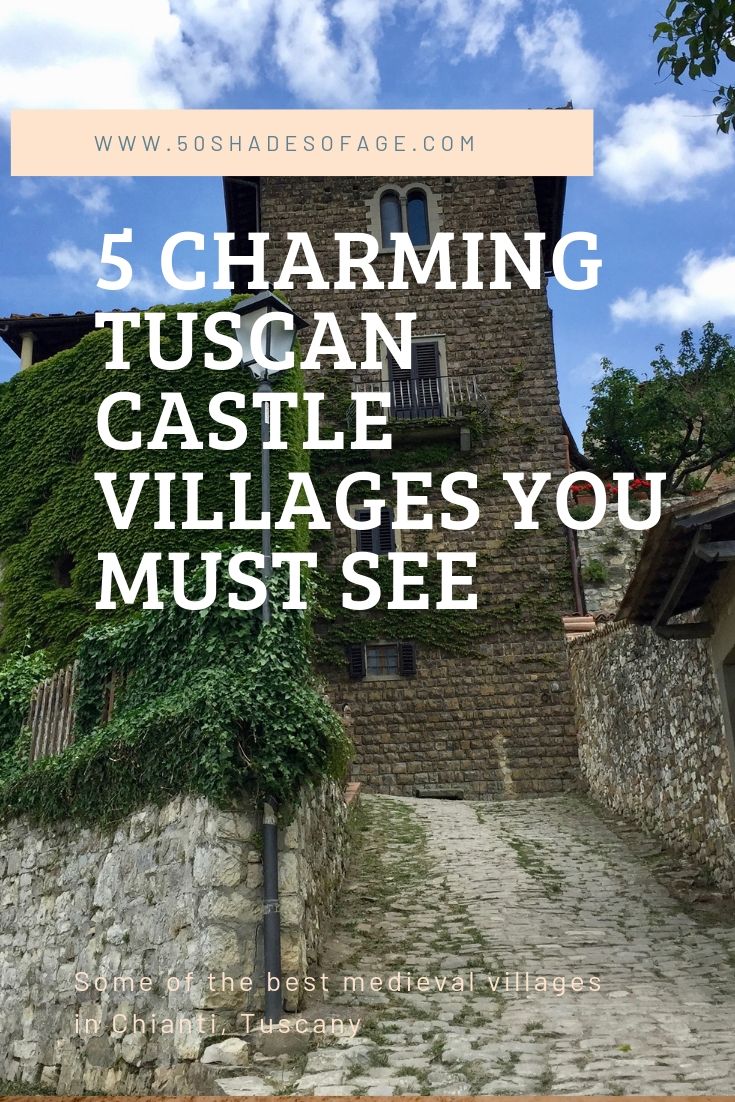 It’s a little over two years since we were travelling through Italy. It was without a doubt one of my most memorable overseas holidays and although there were many highlights our time in Tuscany was a standout. This region in central Italy boasts countless medieval villages, historical towns, castles and fortresses, country churches and beautiful abbeys. These are scattered all over the region set against the backdrop of rolling hills, vineyards and olive groves. I’ve selected the most 5 charming Tuscan castles villages you must see, but you should also take the time to see the bigger castle town of San Gimignano and the city of Lucca.

Our journey into Tuscany started with a quick visit to Pisa to check out that very famous landmark – the Leaning Tower of Pisa. After spending the morning here trying to re-enact the perfect picture pose that depicts you holding up the inclining ancient tower, we moved onto the city of Siena. Here we spent one night and one day strolling around the old walled city and visiting the numerous landmarks, including the very impressive Piazza del Campo and black and white striped Duomo of Siena. 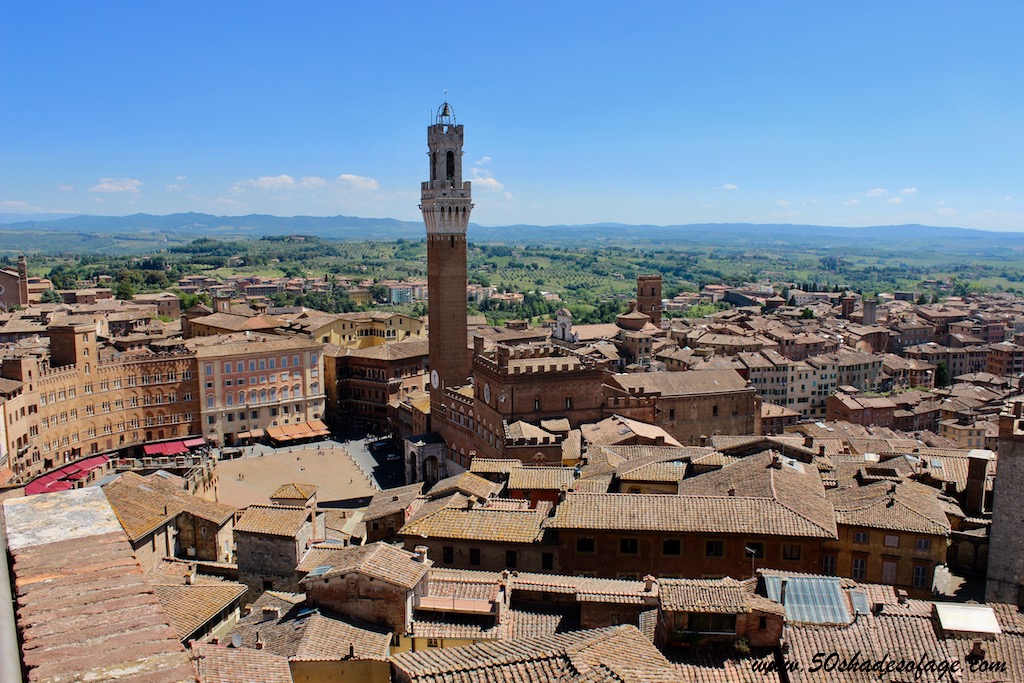 The following day we headed to the Chianti region of Tuscany and the beautiful village of Castellini in Chianti, a distance of only 26 kilometres. Immediately we were treated to spectacular scenery of green hills, vineyards that stretched forever, charming villas and tall castle turrets dominating the landscape.

Map of Chianti in Tuscany

Our choice for accommodation during our five day stay in Tuscany was the charming village of Castellini in Chianti. This 11th century village was once known as Salingolpe and was an important stronghold due to its strategic position between Florence and Siena. 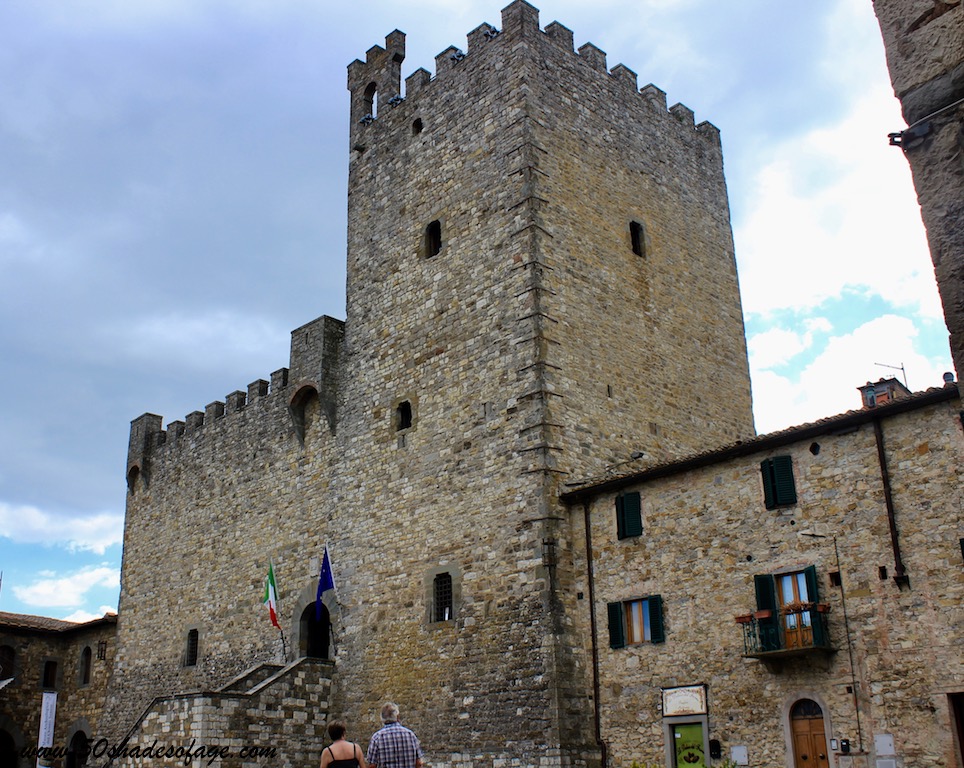 One of the towers in Castellini

The main fortification in the village, called the Rocca and its huge 14th-century tower, has a magnificent view over the town and the surrounding countryside. The main street of Via Ferruccio houses boutiques, workshops, cafes and historically significant buildings such as Palazzo Banciardi and Palazzo Squarcialupi. We were fortunate to stay in the Hotel Palazzo Squarcialupi for 5 nights and we weren’t disappointed with our choice. 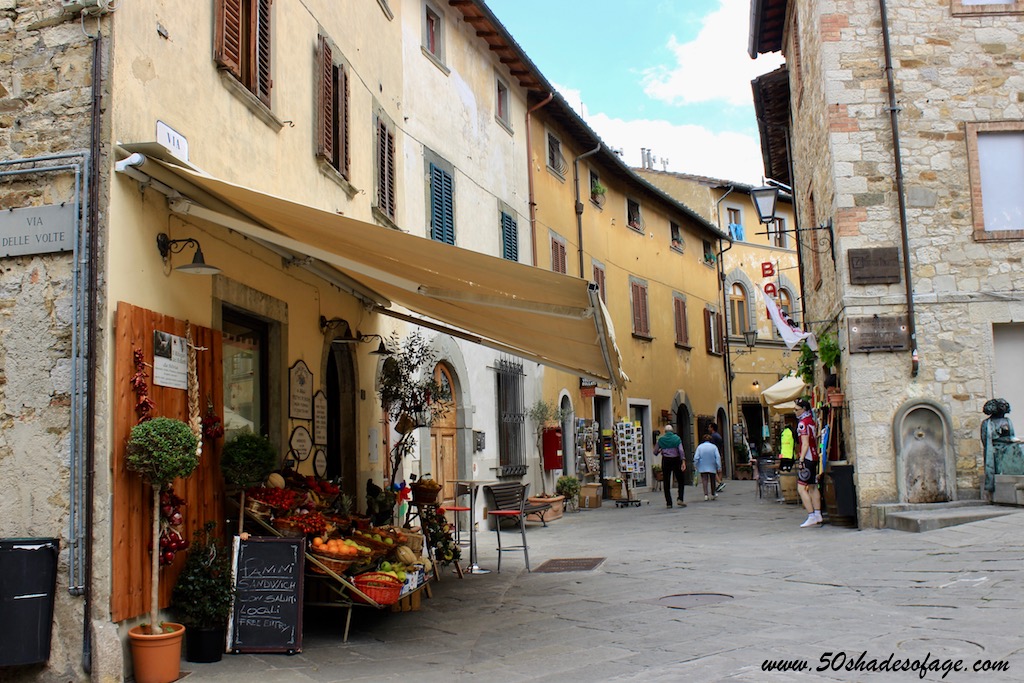 The main street of Castellini in Chianti

Just off Via Ferruccio there is the Church of San Salvatore that displays a valuable fresco by Lorenzo Bicci depicting the Virgin Mary with Child and a wooden statue from the Renaissance. Inside the Rocca is the headquarters for the local commune or Municipality and the Archeological Museum of Chianti, displaying important archeological findings from the surrounding area that testify to the ancient origins of the Chianti region. 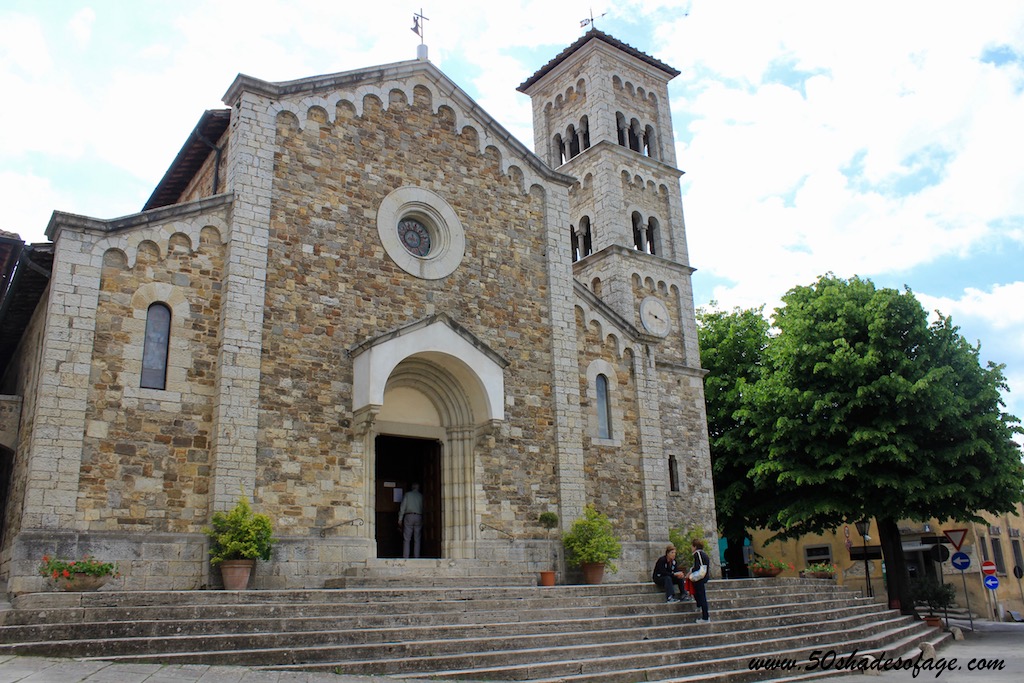 After settling into our hotel, on the following day we set off for the tiny hamlet of Monteriggioni, near Siena. It may be tiny, but this ancient Tuscan village packs a punch. The entire village is hidden inside a fortified citadel, whose walls and 14 towers conceal its existence entirely. Nowadays only a few of the buildings are lived in, the rest of the village gives way to an interesting museum housing Renaissance armour and artefacts, along with a few shops and restaurants. 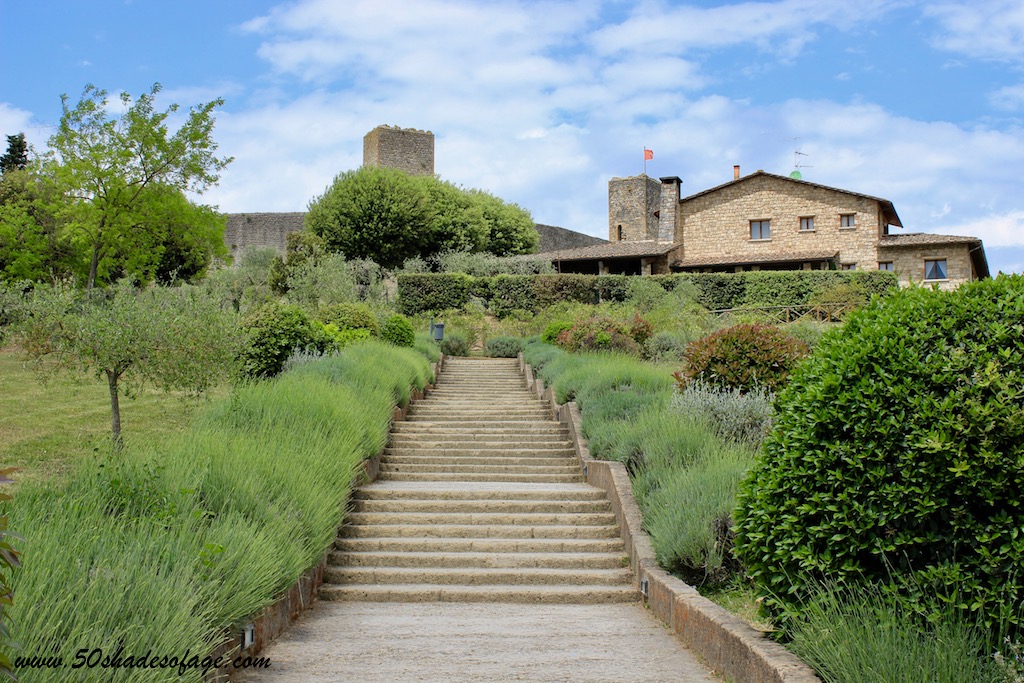 Stairs up to Monteriggioni Castle

The castle was built by the Sienese between 1213 and 1219 for defensive purposes with its strategic location atop a hill. There is a car park at the bottom of the hill and after a short stroll up some stairs you’re already in the heart of the village in the main Piazza di Roma onto which the Church of Santa Maria Assunta faces. Built at the same time as the rest of the castle, the church is in Romanesque and Gothic style. 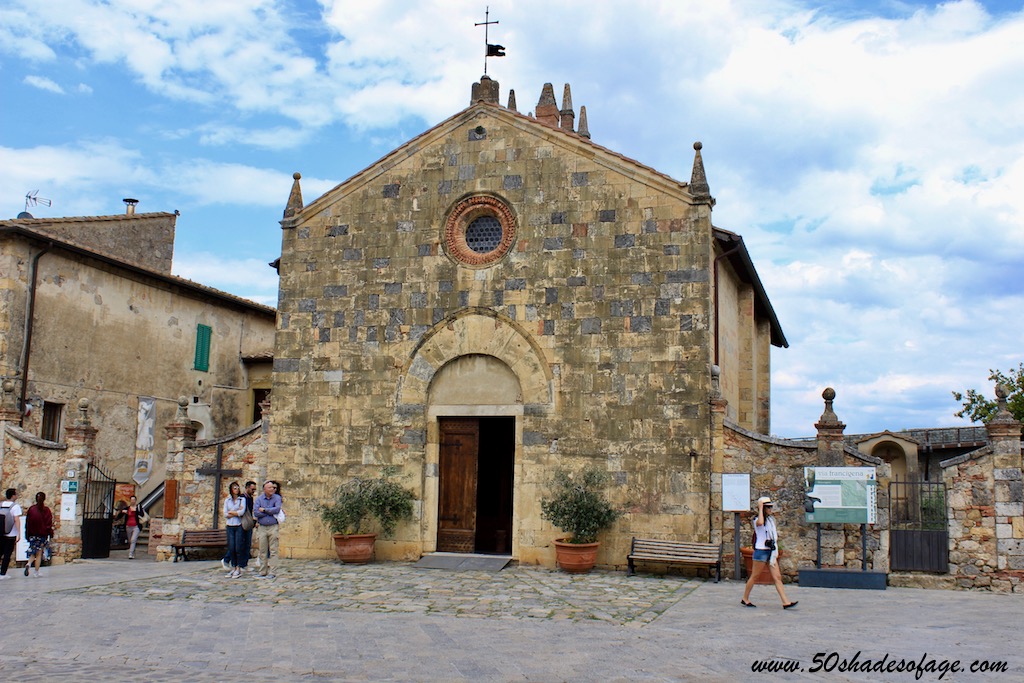 Every July within the fortified wall of the town a special event is celebrated: theMedieval Festival of Monteriggioni, one of the most popular medieval festivals in the region. 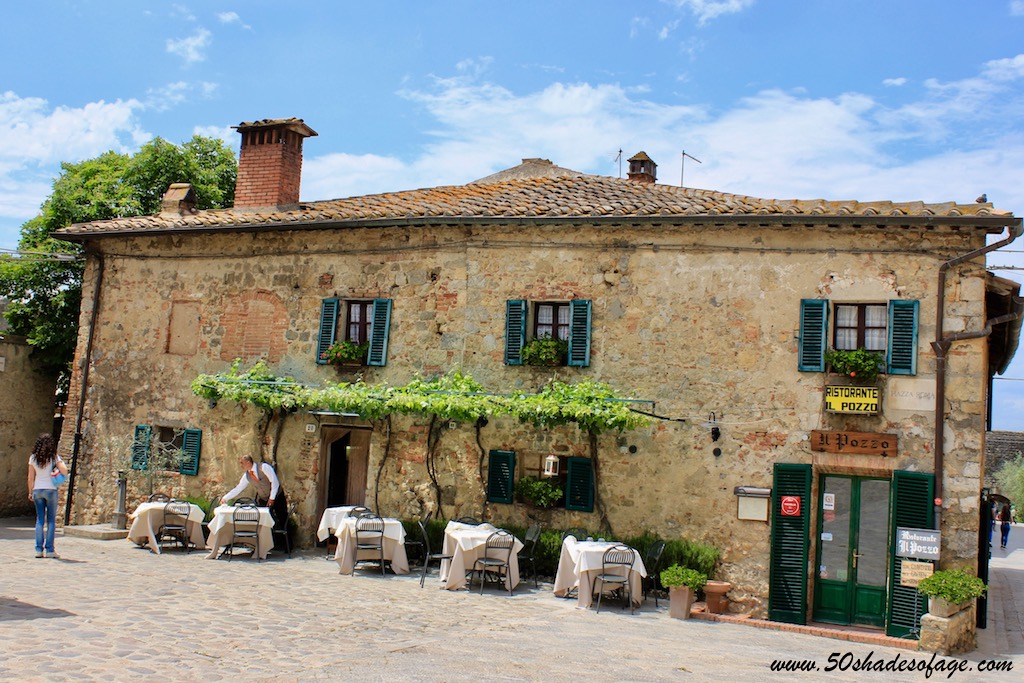 Ristorante in the Piazza of Monteriggioni

This small castle located near Gaiole in Chianti, preserves its original medieval look enclosed in massive walls dating back to 1013. Vertine is surrounded by vineyards and olive groves and it’s exquisite. The fact that it still houses residents within the citadel and does not have any shops or other tourist attractions, expect one cafè, gives it an authentic feel. 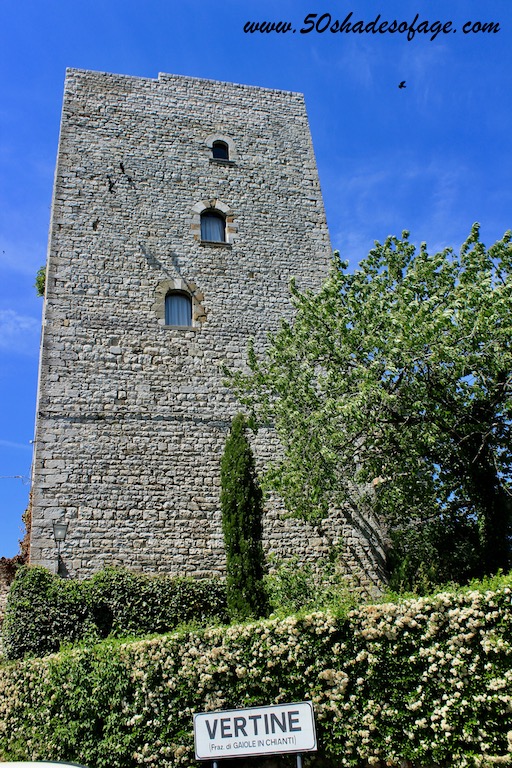 Inside the castle walls  there is the Church of San Bartolomeo a Vertine, dating back to 11th century whose facade was rebuilt during 20th century in a Neo-Romanesque style. Inside you can admire part of renaissance frescoes by the Florentine school. 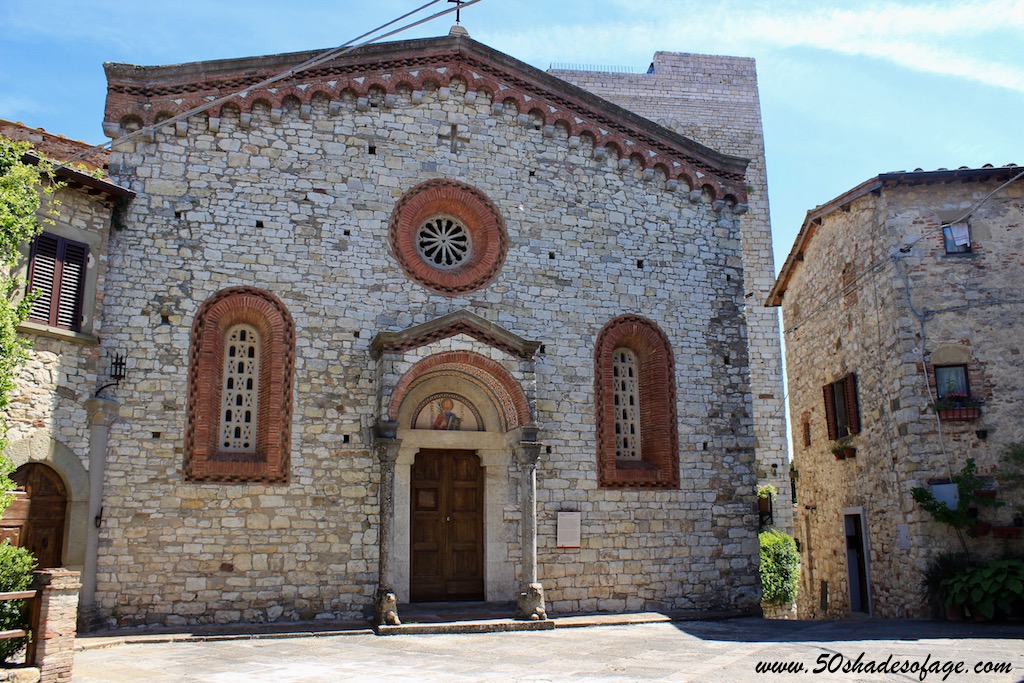 It’s wonderful just to stroll around the narrow cobblestoned laneways in the castle and soak in the quaintness of the village life. 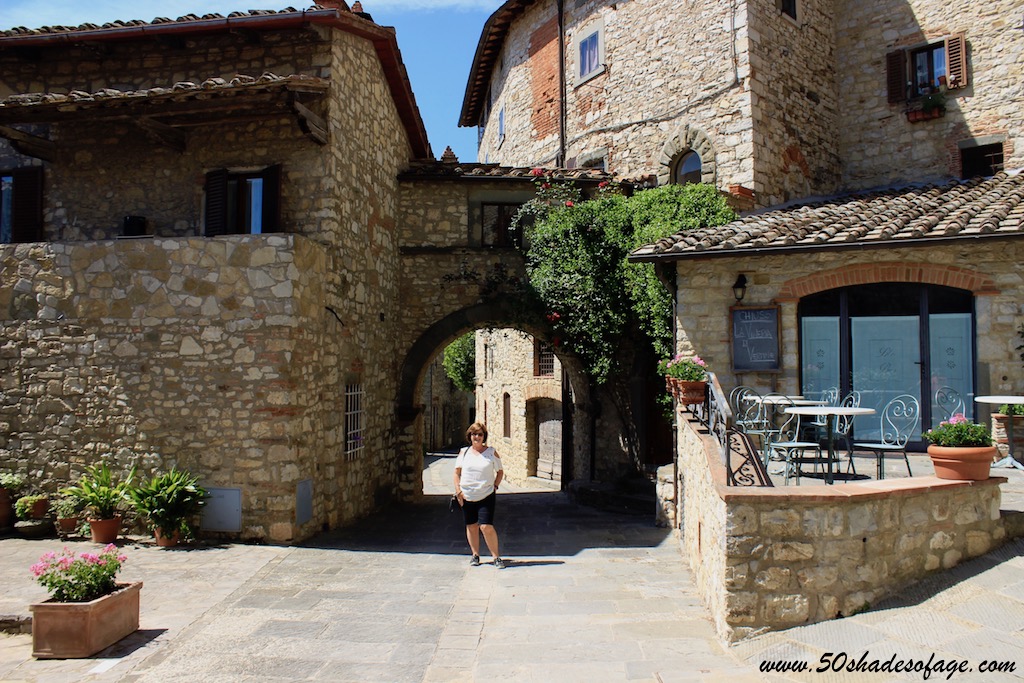 Inside the Walls of Vertine Castle

This small fortified Tuscan village was the home town of the della Volpaia family who were clock and instrument makers. The entire village retains a great deal of its original architecture and has been attractively restored. Although only part of the original protective walls and two of its six towers are still standing, the medieval layout and buildings within the village are still intact, making Volpaia one of the best-preserved villages of its period. 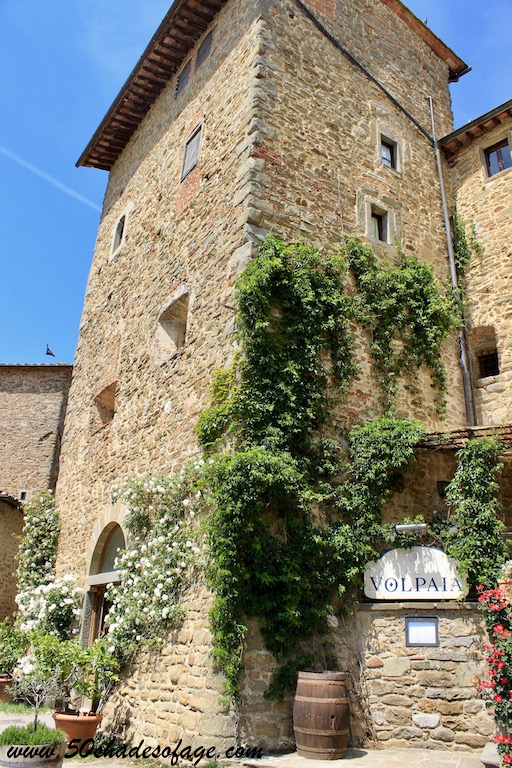 The village houses one of the highest-elevation wineries in the Chianti area, the Castello di Volpaia owns 46 hectares (114 acres) of vineyards. The winery is organically farmed for producing extra virgin olive oil, vinegar and wine, in particular Chianti Classico. 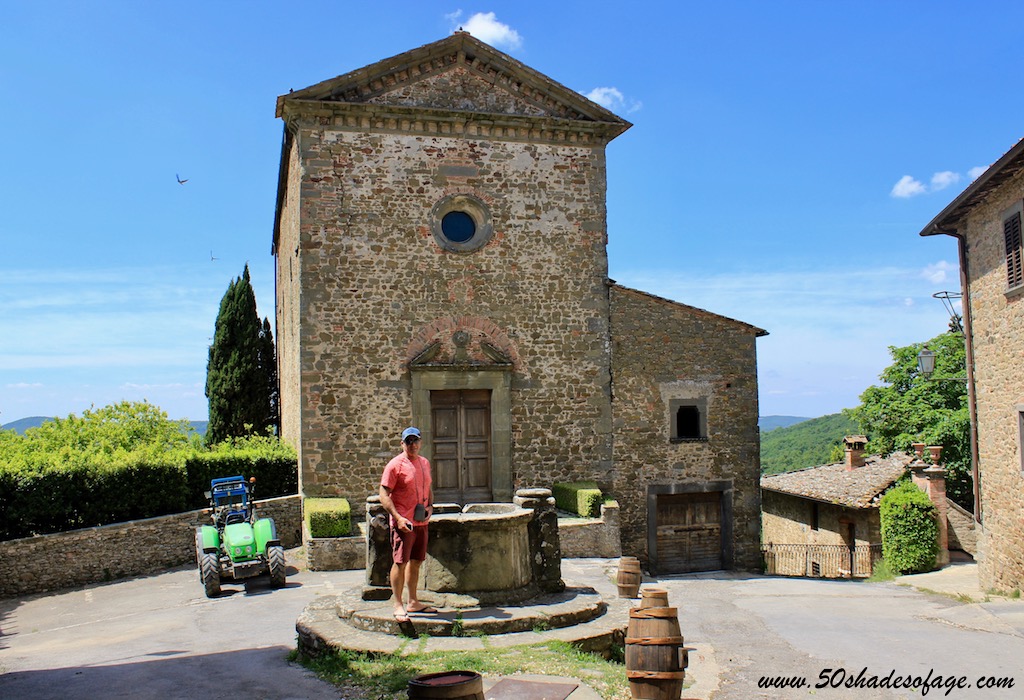 Volpaia offers three restaurants, one of which we stopped for a delicious lunch and a glass of prosecco, and has a number of vacation rental apartments. There is very little traffic within the village and with panoramic views over the surrounding vineyards and forests, together with its location in central Chianti, it’s a must see when visiting Tuscany. 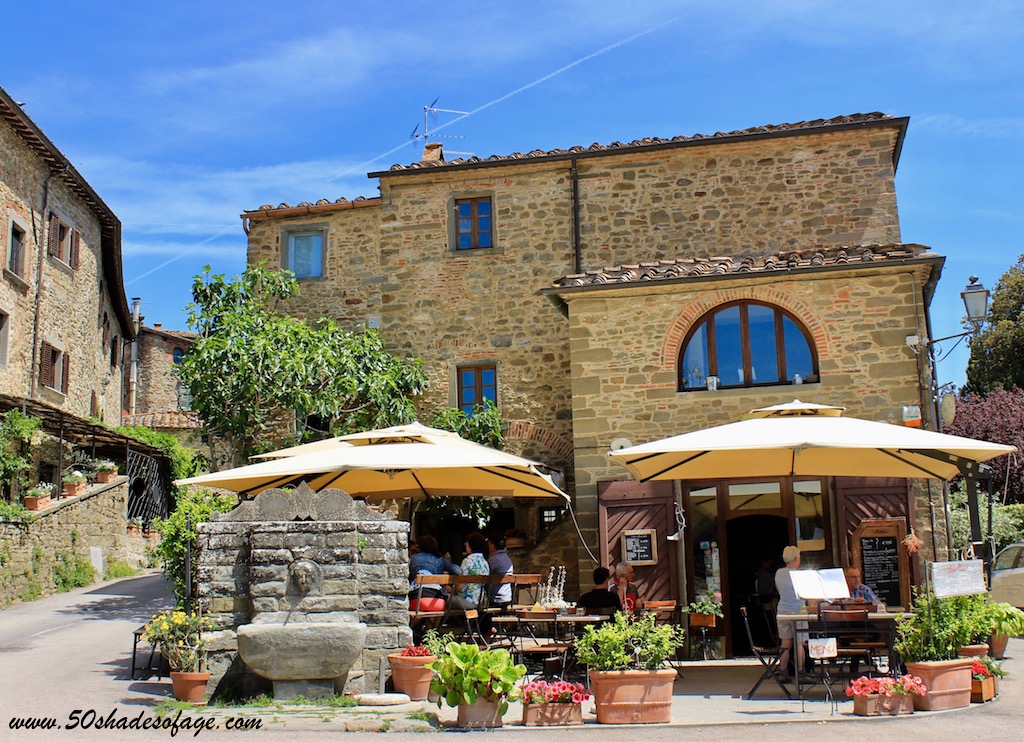 One of my favourite castles in Tuscany was Montefioralle which is one of the most ancient villages of the Chianti area and is also considered one of the most beautiful villages in Italy. The original name of this place was “Monteficalle,” referring to the fig trees that grow in the fields around the castle. 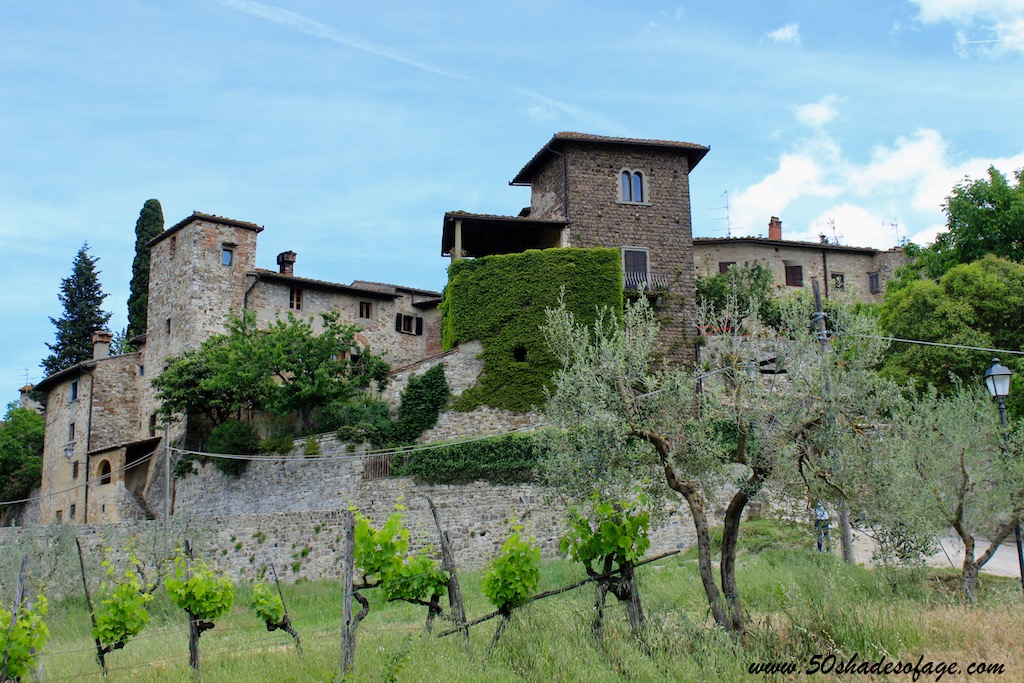 The Village of Montefioralle

The village is still enclosed in the original defensive walls of the fortress and dates back to 1085 during the Middle Ages. It was one of the greatest military and administrative centres in the Chianti area and there are still some of the original stone houses remaining. The cobblestoned ancient streets climb through the village, creating a charming atmosphere. 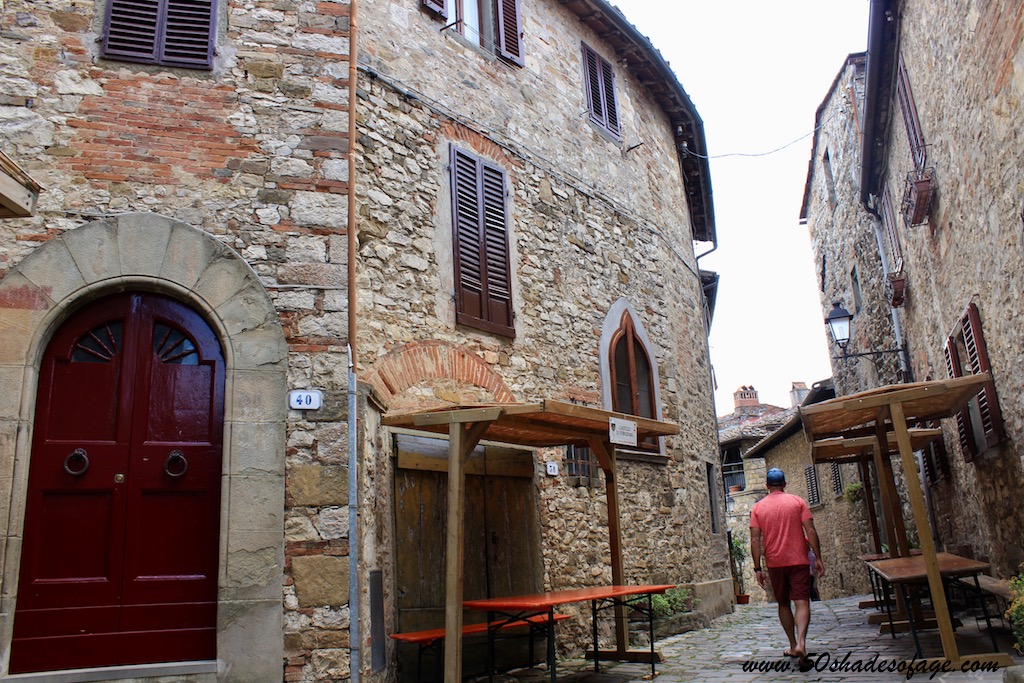 The narrow lanes of Montefioralle

The view from Montefioralle is stunning with vineyards, olive groves, old farms and green fields sprawling for kilometres. The village is car free and there is ample parking at the bottom where you can take the stairs uphill towards the gate into the citadel. 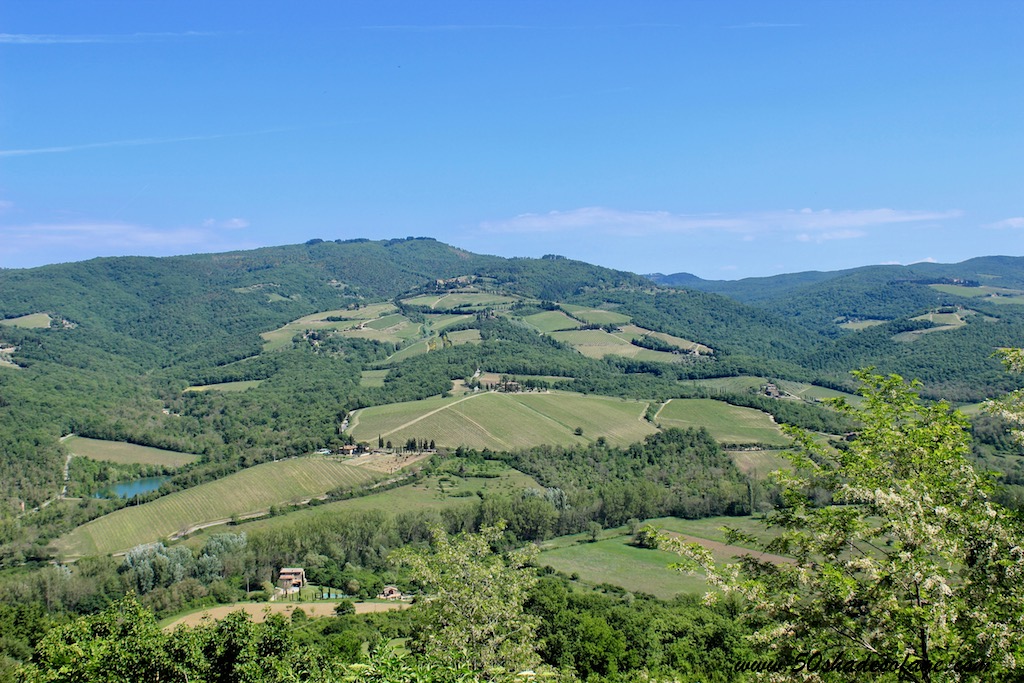 Tourists to Italy flock to the big cities like Rome, Florence, Naples and Venice, thinking that Tuscany is just a region full of grapes, olives and family owned vineyards. But it is so much more than this. The history and architecture of the region is extraordinary. I would say that this is one region that you should definitely put on your Italian holiday itinerary.

Spread the love
Italian HolidayItalyTuscan Castle VillagesTuscan Medieval TownsTuscan VillagesTuscany
By 50 Shades, June 12, 2019 Kathy was a 50 something year old when she started up this blog 6 years ago, but has since turned over another decade and is now in her early 60s. She is married with two adult children and lives on the Tweed Coast of New South Wales, Australia. Kathy enjoys living life to the fullest and loves to keep fit and active by maintaining a healthy diet and exercising regularly. Some of her interests include reading, photography, travelling, cooking and blogging! Kathy works part-time as a freelance writer but her real passion is travelling and photographing brilliant destinations both within Australia and overseas and writing about it.