A First Timer’s Guide to Gallipoli 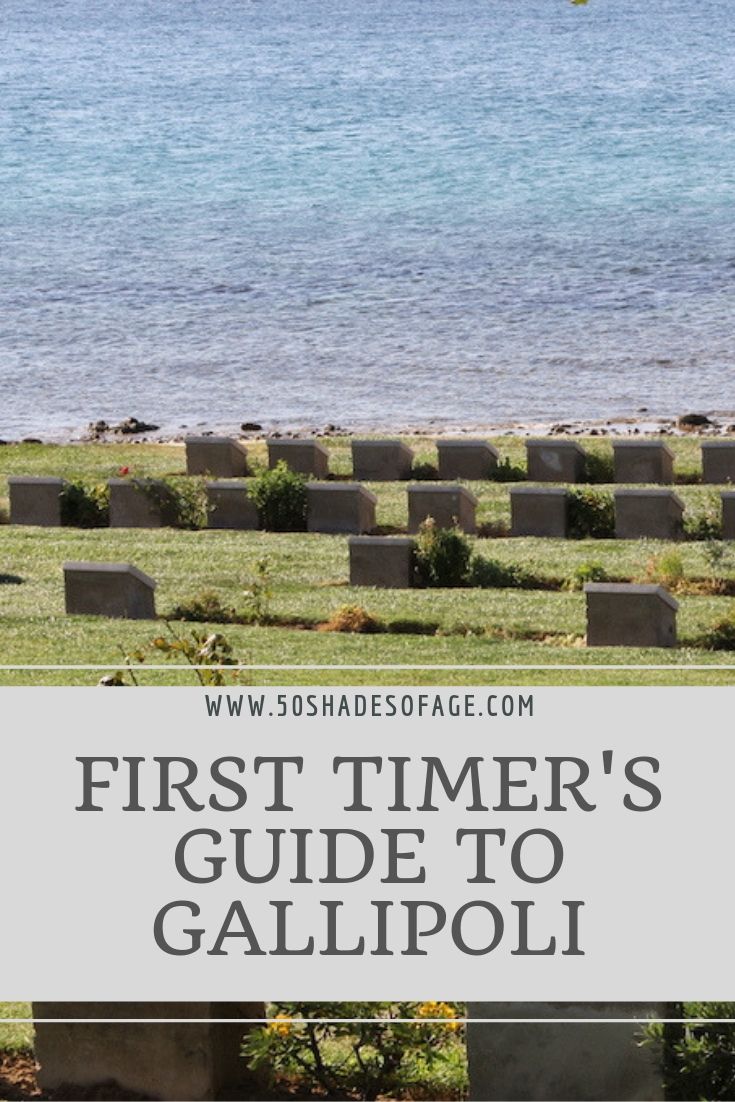 As a proud Australian the name Gallipoli has always held great significance in my life. It was not only drummed into me during my school years, but I remember my mother telling me she lost two great uncles, who were brothers, on the battlefields of Gallipoli in Turkey. In 2012 I was to join my son, who was travelling around Europe at that time in the country called Turkey where “the east meets the west”. Our holiday took in the Gallipoli peninsula that is located in the southern part of Turkey. It was an emotive and thoroughly educational visit that impelled me to write a first timer’s guide to Gallipoli.

The Gallipoli peninsula (Gelibolu peninsula) is located in the southern part of East Thrace, the European part of Turkey, with the Aegean Sea to the west and the Dardanelles strait to the east. 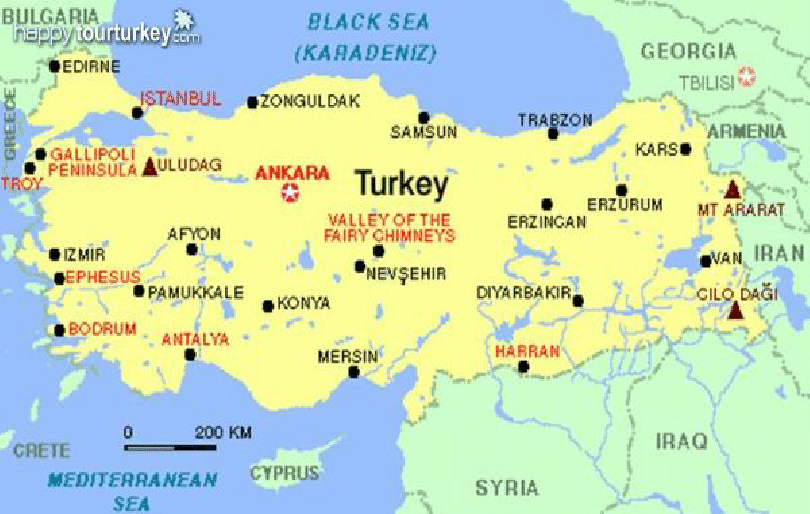 How to get to Gallipoli

From Istanbul it’s around 290 kilometres or 4.25 hours. There are several tour bus companies that take day trips out to Gallipoli returning on the same day. I would advise to do it as a two day trip, staying overnight in Canakkale, otherwise it’s lengthy hours of travelling on a bus over a one day period. 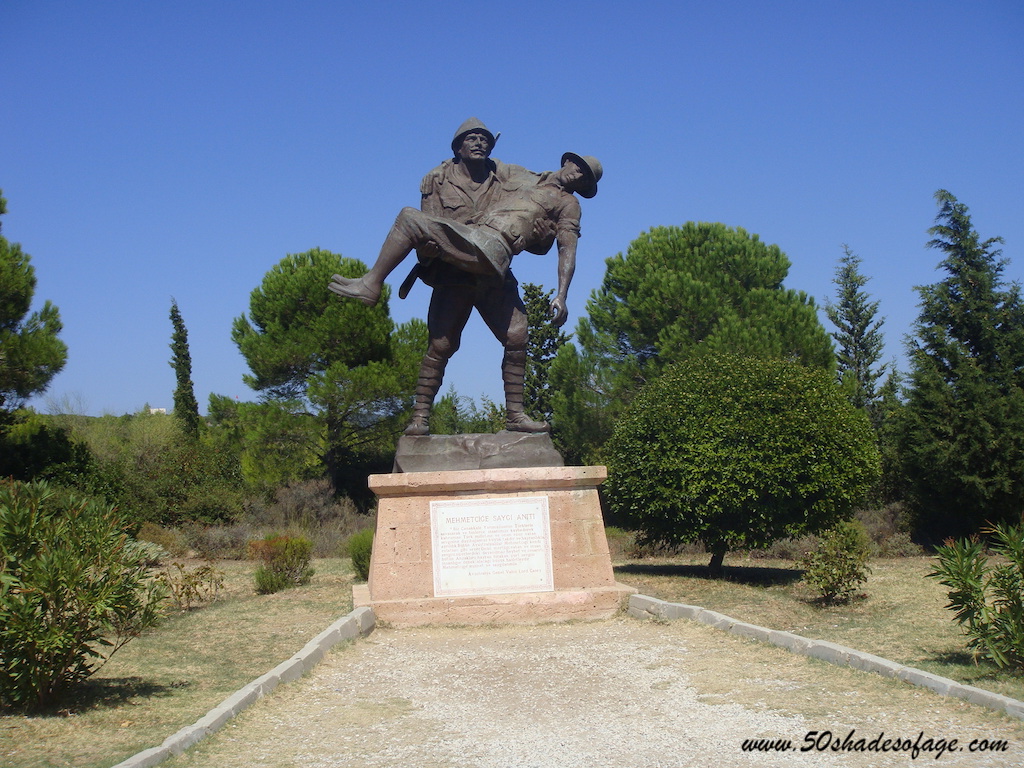 Why was Gallipoli Strategically Important

Attempting to seize a strategic advantage in World War I and open up a supply route to Russia, the British authorised an attack on the Gallipoli Peninsula in April 1915, to capture Istanbul (formerly Constantinople). The British and Anzacs both landed on the peninsula on 25 April 1915, which is know globally known as Anzac Day that is commemorated on this day every year in Australia and New Zealand.

I would recommend a fully guided tour of Gallipoli as the points of interest are spread wide apart. Attempting to see it on your own without a guide, it would be easy to get lost or misunderstand the significance of some of the important places on the battlefields of Gallipoli. For more information on available tours to Gallipoli visit Gallipoli Tours. 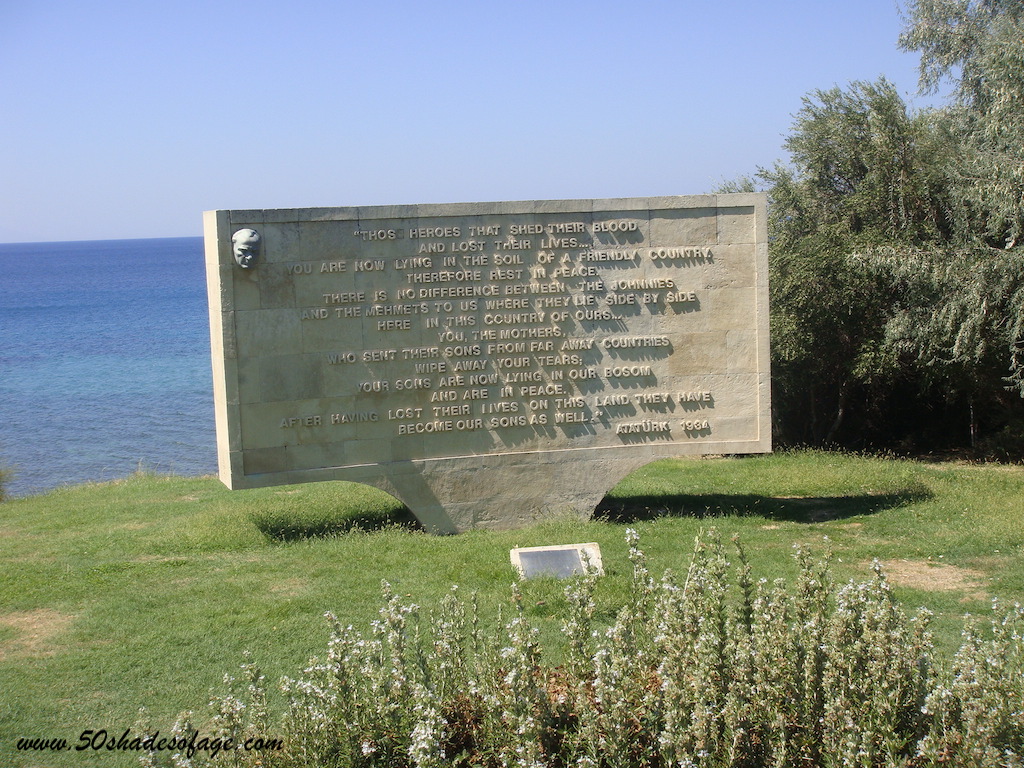 On the day of our tour we met our tour guide after a long but comfortable bus trip out to the Gallipoli peninsula from Istanbul. Fortunately our guide was an extremely knowledgeable Turkish Professor who had studied the Gallipoli invasion in depth. Initially after getting off the bus we got our first glimpse of the six kilometre coastline which was later on renamed Anzac Cove after the heroic soldiers of the allied forces of Australia and New Zealand. 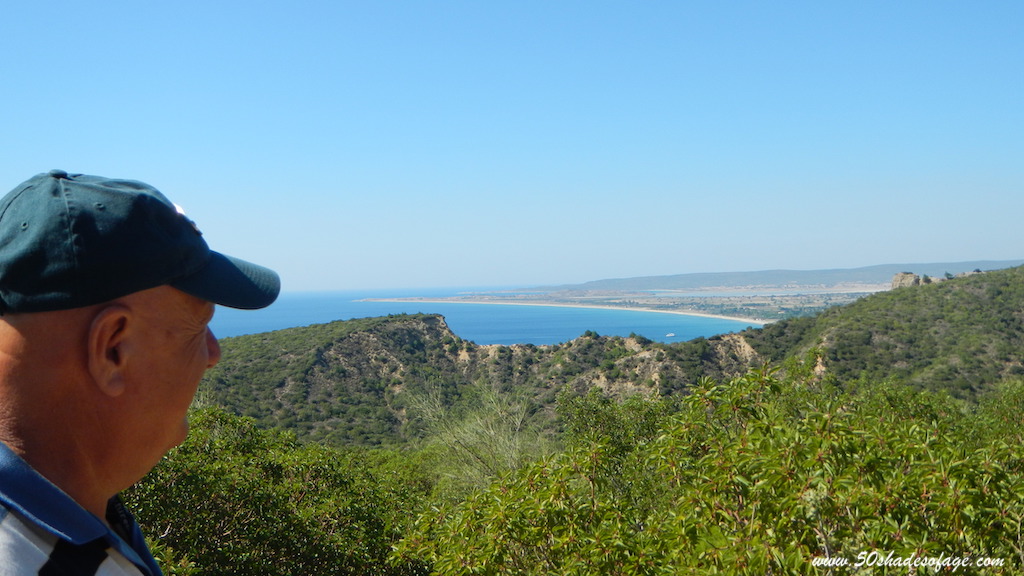 Our tour took in the following points of interest: 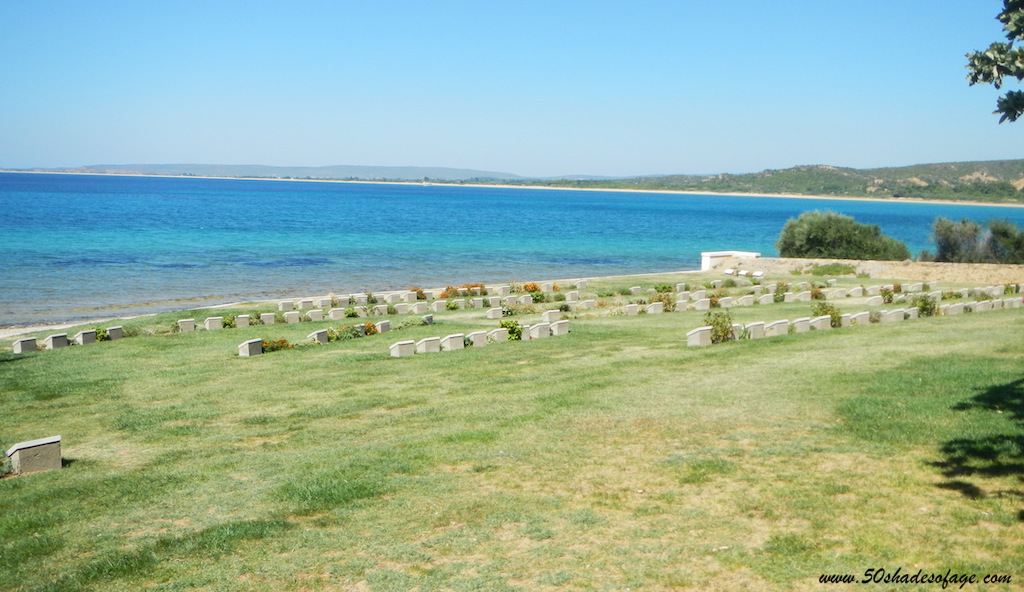 We visited many of the sites where battles occurred and lives were lost senselessly, including the Australian soldiers burial ground called Lone Pine. 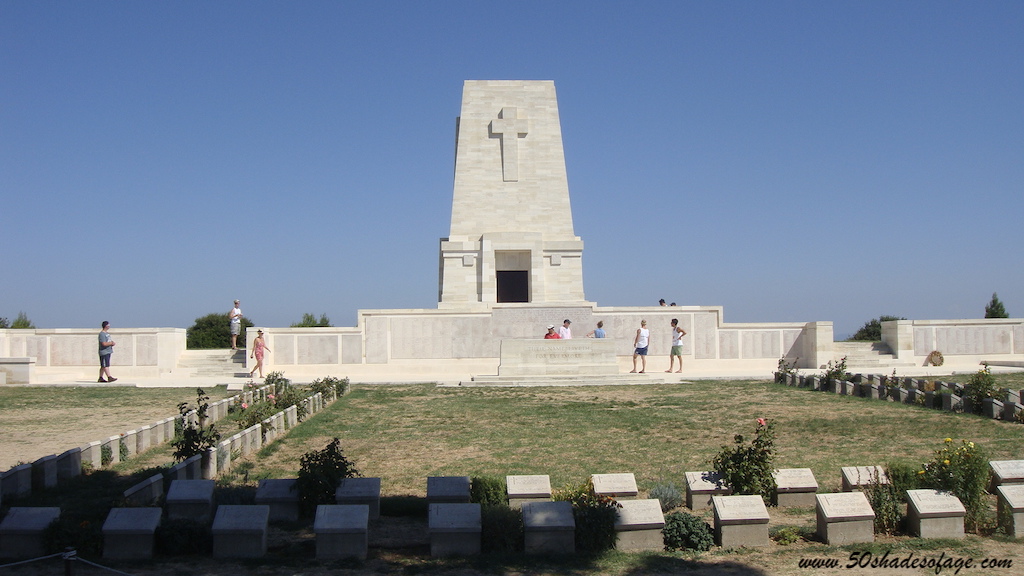 My Great Great Uncle Horace was killed as he disembarked off the boat at Anzac Cove and his body was never recovered. There is a commemorative plaque with his name on it at the memorial at Lone Pine. It was a very emotional moment for me thinking of how he died so young and innocent in a faraway land. Imagine how tough it was for his family, my great grandparents, having no remains to bury and never really knowing what had become of him? 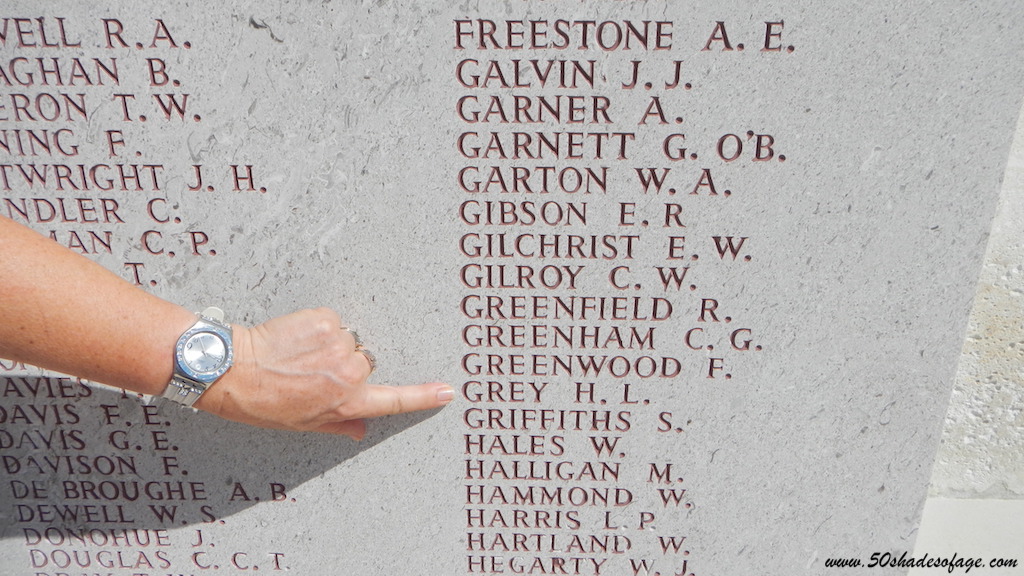 The casualties of the Gallipoli Campaign were alarming: 8,159 Australians and 2,721 New Zealanders were killed, whilst 41,148 British and Irish were killed. The Gallipoli campaign was a costly failure for the Allies and alongside The Ottoman Empire who paid a heavy price for their victory: an estimated 85,000 Turkish troops were killed defending Gallipoli. 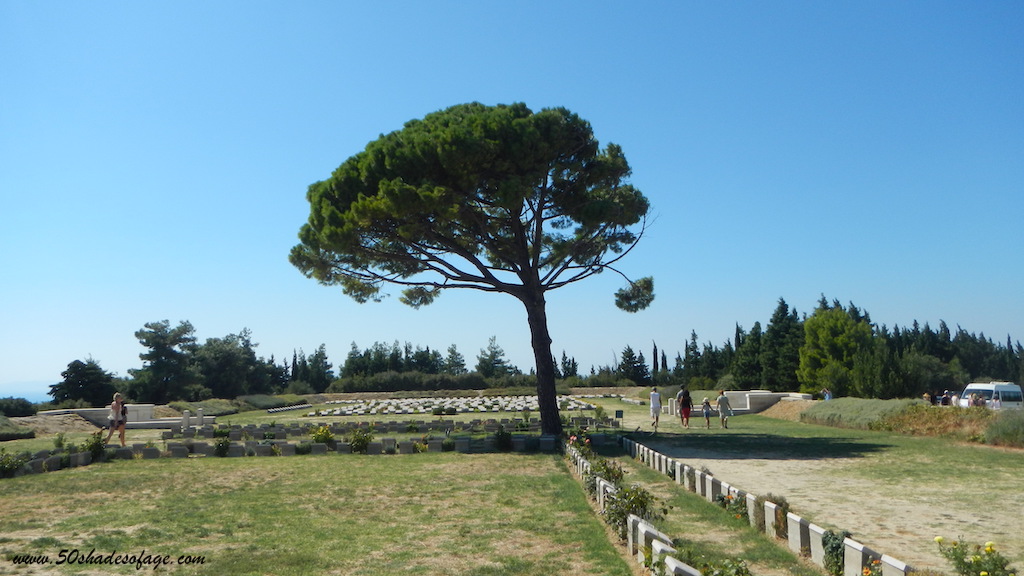 What I loved about our tour guide was not only his great knowledge of the Gallipoli campaign, but his unbiasedness towards the invaders of his country. His compassion towards both the allied forces and the Turks that lost their lives on the battlefields of Gallipoli was remarkable. 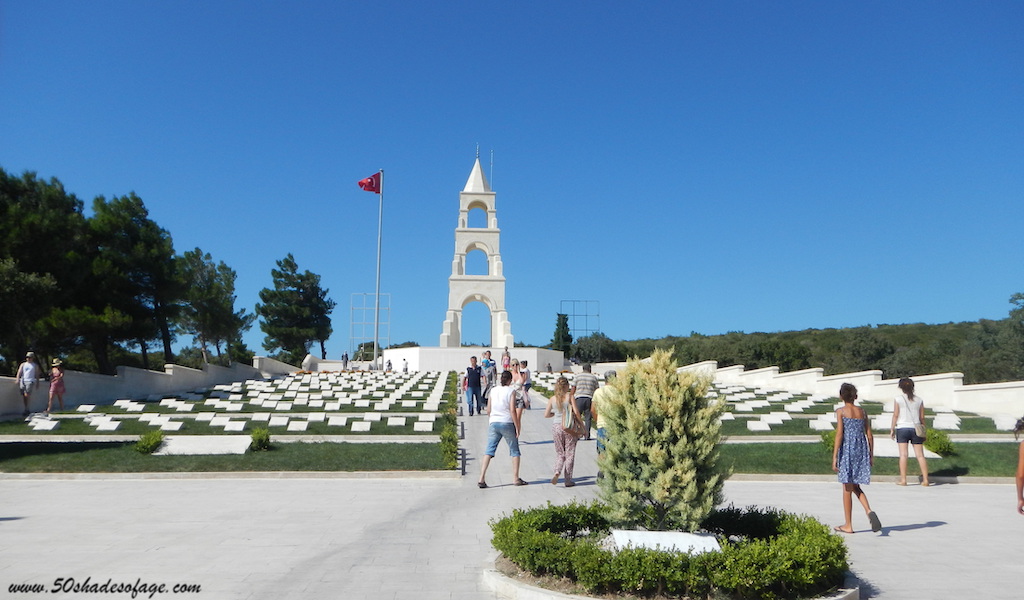 The Turkish Soldier Memorial at Gallipoli

While there is still much to see on the Gallipoli battlefields, there is also history beneath the waves, with many relics from 1915 below the water of the crystal clear Aegean Sea. During the summer, you can do anANZAC Snorkelling Tour, swimming over the wreck of the supply ship Milo, which lies just to the north of ANZAC Cove. The snorkelling tours are a great way to learn more about the campaign, swim off the same beaches the Australians and New Zealanders landed on and see the land as they saw it as they came ashore. Crowded House Tours out of Eceabat run these tours on a daily basis. 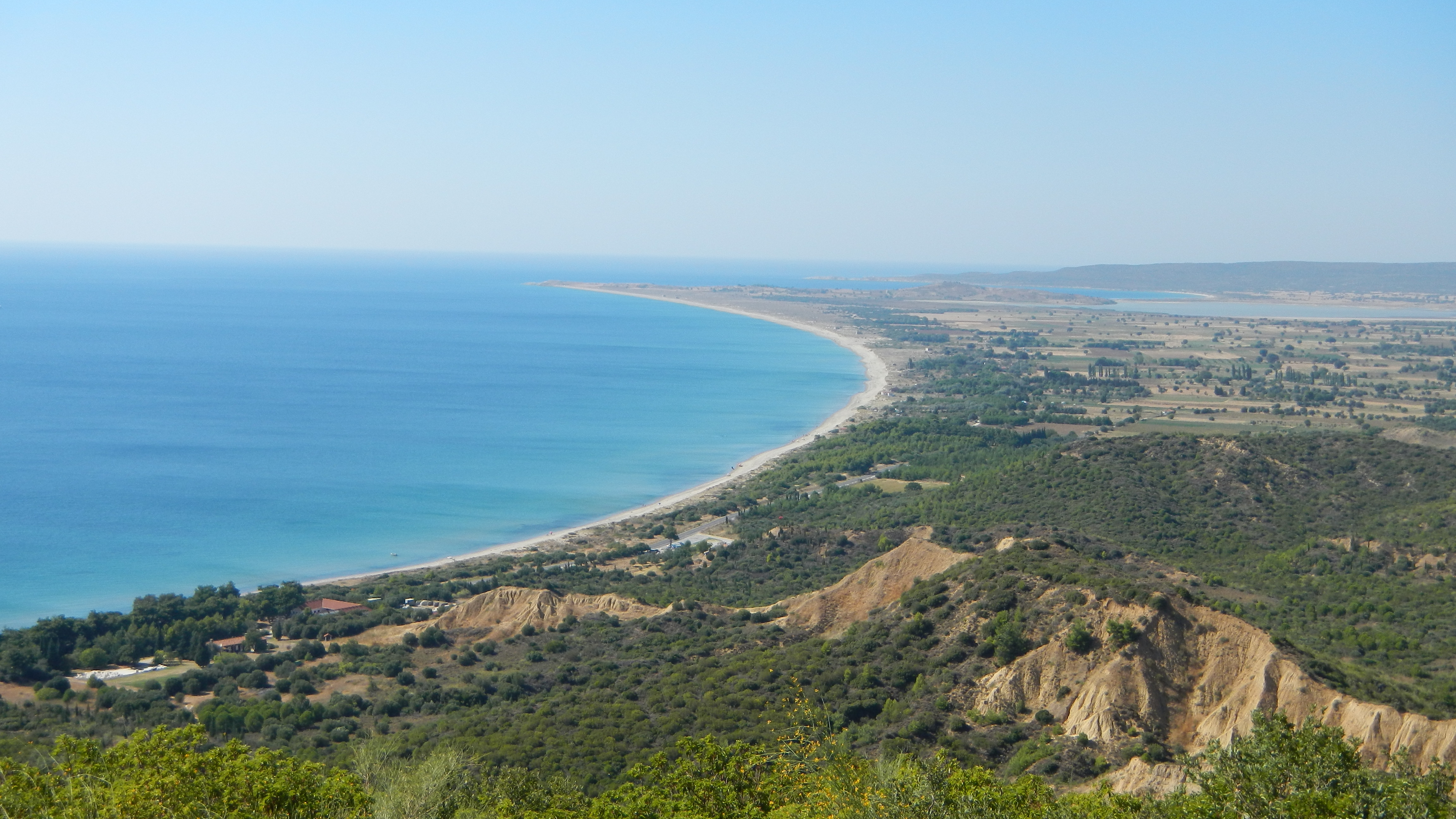 View over the shores of Anzac Cove

The nearest town to the World War I Gallipoli Campaign battlefields of 1915,  is located on the eastern shore of the Gallipoli Peninsula, on the Dardanelles Strait. The distance between Eceabat and Canakkale is only 6 kilometres and you can transfer between the two very cheaply by ferry or local bus. 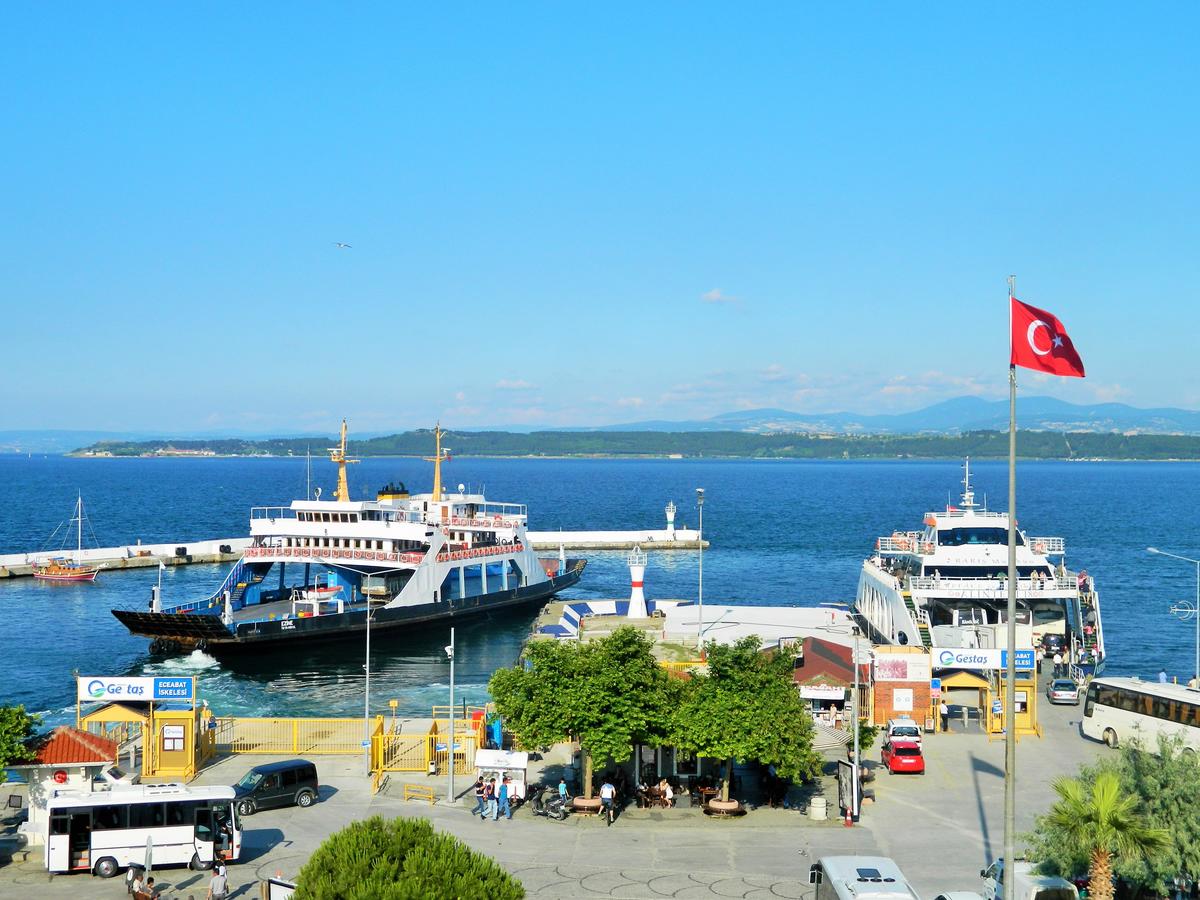 There are tours available to Gallipoli departing from Eceabat or Canakkale which is a very good alternative to getting on a tour from Istanbul. It’s a great idea to stay overnight or longer, either in hotels in Eceabat or across the Dardanelles Strait in Canakkale. 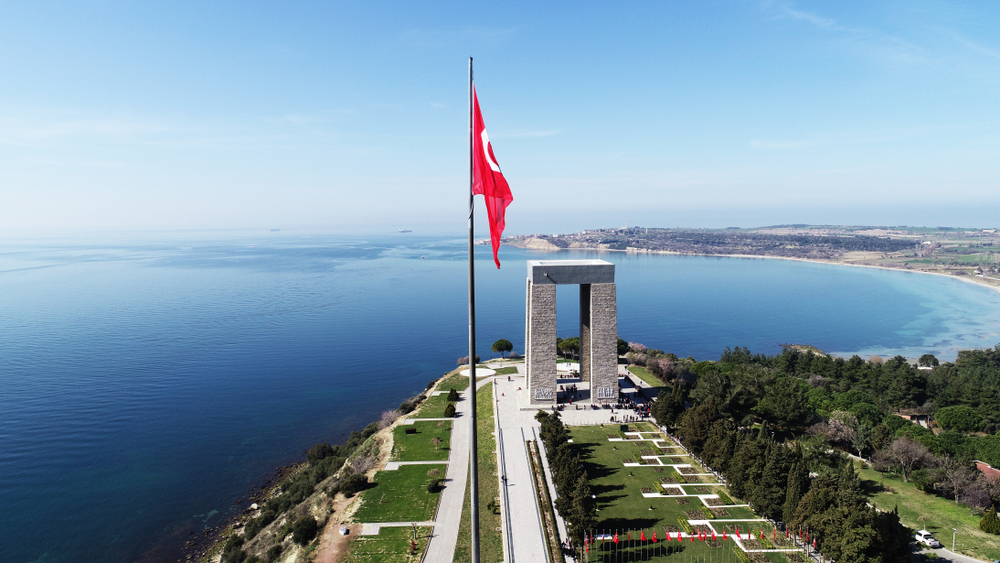 After we’d completed our tour of Gallipoli we headed across the Dardanelles by ferry, the narrow strait connecting the Aegean Sea to the Sea of Marmara, to the town of Canakkale, only 21 kilometres from the Gallipoli Peninsula. Our organised tour out of Istanbul included one night here and a day trip out to the Troy ruins prior to returning to Istanbul. However we opted to stay in Canakkale a second night before we continued on our trip down the Turquoise Coast of Turkey. 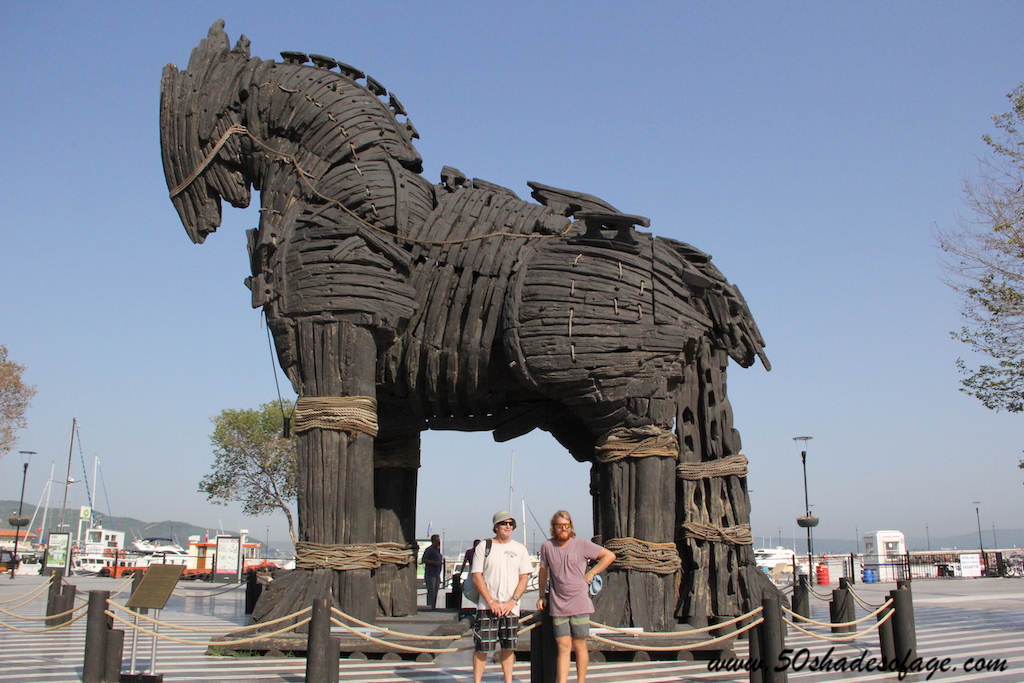 Canakkale is where most tourists to Gallipoli stay during their visit and is a thriving seaport with a large replica of the Trojan Horse used in the battle of Troy on the waterfront. The vibe in this town is very upbeat and there are many boats in the harbour and waterfront restaurants and cafes lining the promenade. 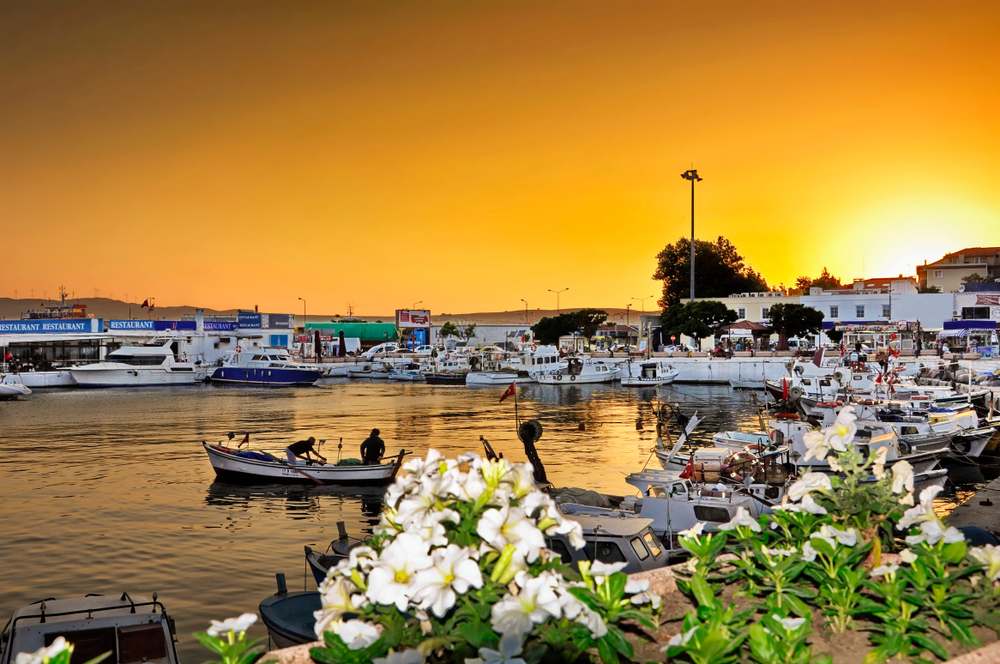 The Waterfront in Canakkale

My experience visiting Gallipoli, although an emotional one, brought home the hardships the soldiers suffered that were fighting this senseless battle. To actually witness the difficult steep terrain and highly vegetated dunes that surrounded the cove put it all into perspective. The Anzacs fighting alongside the British never really stood a chance under such circumstances with the Turks occupying the higher ground. This is possibly one journey that every young Australian should take in their lifetime to make them appreciate the full magnitude of war, heroism and human sacrifice.

Spread the love
CanakkaleGallipoliGallipoli TourTravel TurkeyTurkey
By 50 Shades, June 19, 2019 Kathy was a 50 something year old when she started up this blog 6 years ago, but has since turned over another decade and is now in her early 60s. She is married with two adult children and lives on the Tweed Coast of New South Wales, Australia. Kathy enjoys living life to the fullest and loves to keep fit and active by maintaining a healthy diet and exercising regularly. Some of her interests include reading, photography, travelling, cooking and blogging! Kathy works part-time as a freelance writer but her real passion is travelling and photographing brilliant destinations both within Australia and overseas and writing about it.