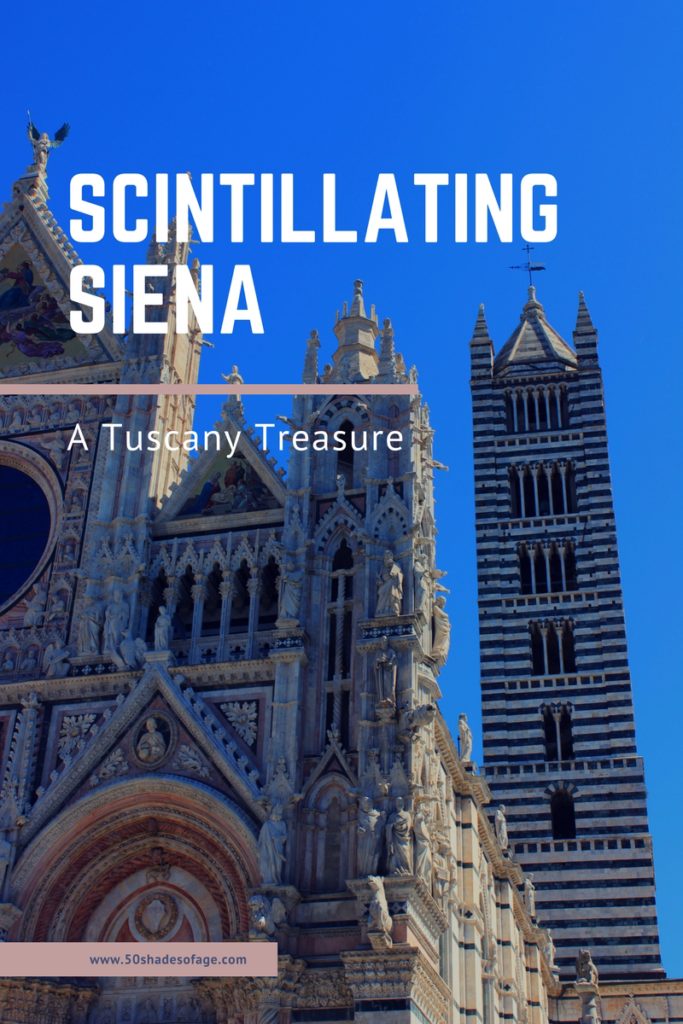 We continued our Italian Holiday by picking up our rental car from La Spezia and motored towards Pisa for a quick look at the infamous Leaning Tower of Pisa. Our final destination upon this beautiful day was scintillating Siena a Tuscany treasure, amidst rolling grapevine clad hills and medieval villages.

We were excited because we had four days under the Tuscan sun to explore this magnificent region and naturally to taste some of the wines that it is renowned for. We discovered it was a great contrast to the previous two places we had visited – Lake Como and Cinque Terre.

On arrival, both starving and in need of food and refreshment we wandered from our Airbnb apartment a few blocks away, to Siena Old Town. We learnt according to medieval legend, this ancient, isolated hill town was founded by Senio, the son of Remus (of Romulus and Remus fame); the legendary founders of Rome in the 8th century BC. 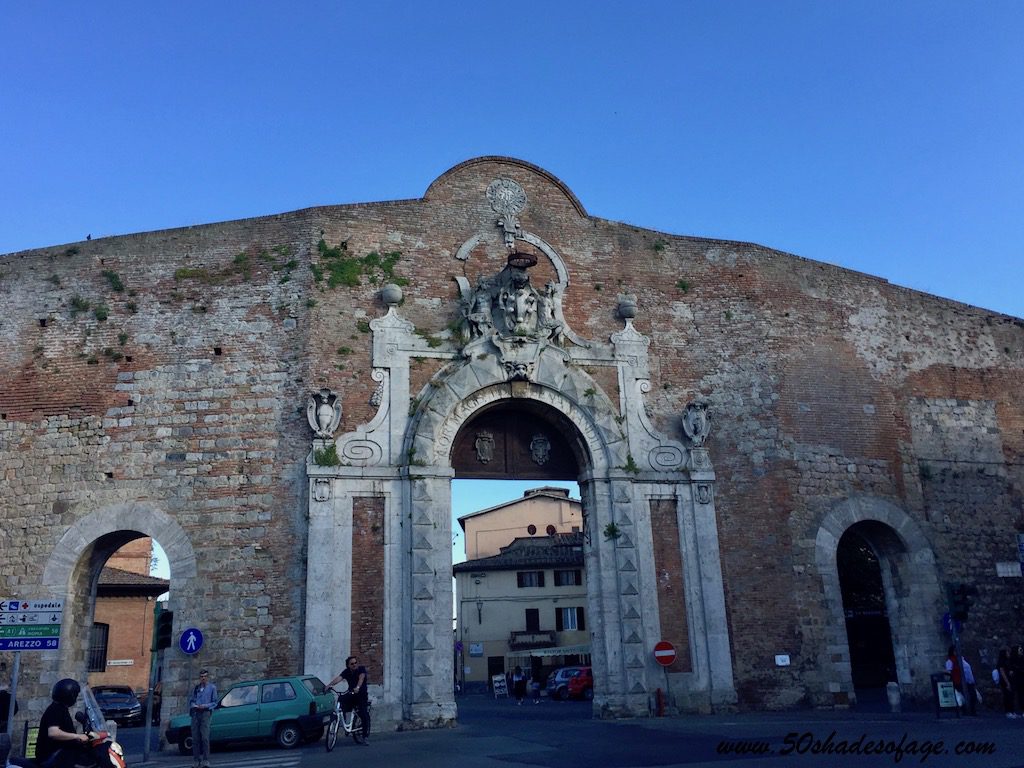 Gate to the Old Town of Siena

Roaming through the narrow paved streets, lined with houses, shops and cafes, we eventually reached the Piazza del Campo. 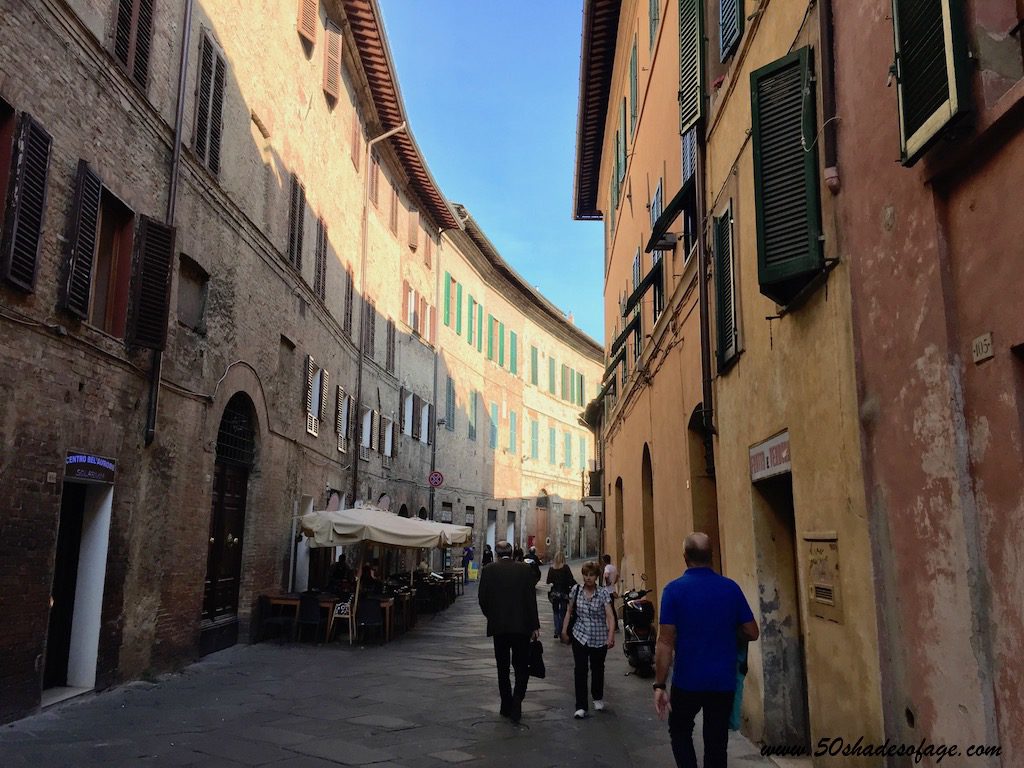 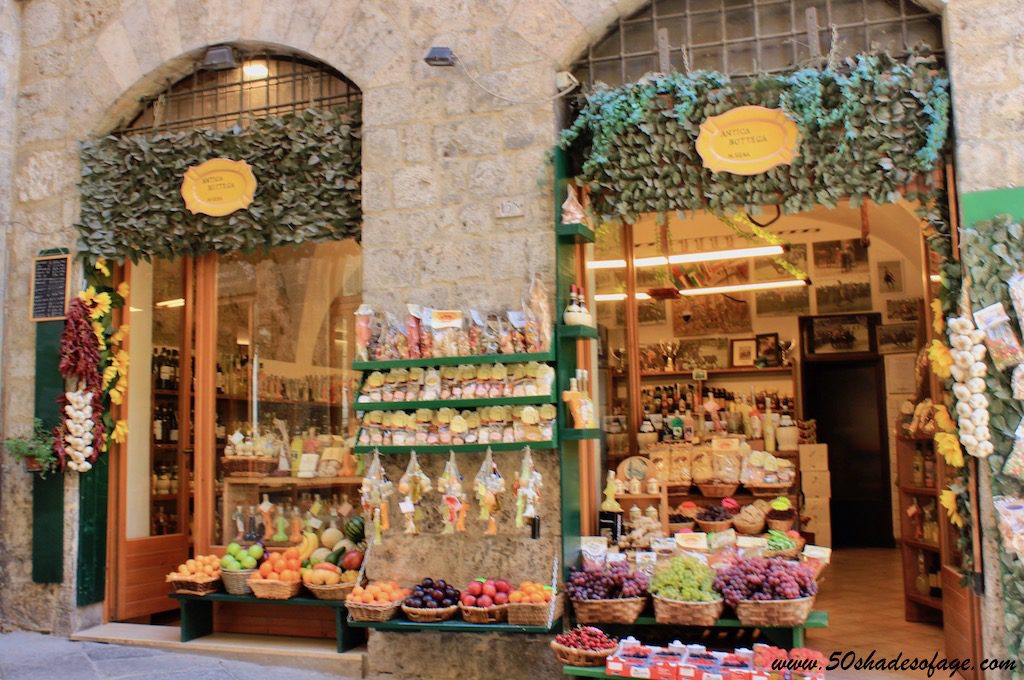 The large shell-shaped square is used for many events and is a unique area where tourists come to sit, after walking the romantic streets of Siena. We sat at one of the restaurants lining the square and soaked in the ambience of this public area as the sun dipped into the Tuscan countryside. 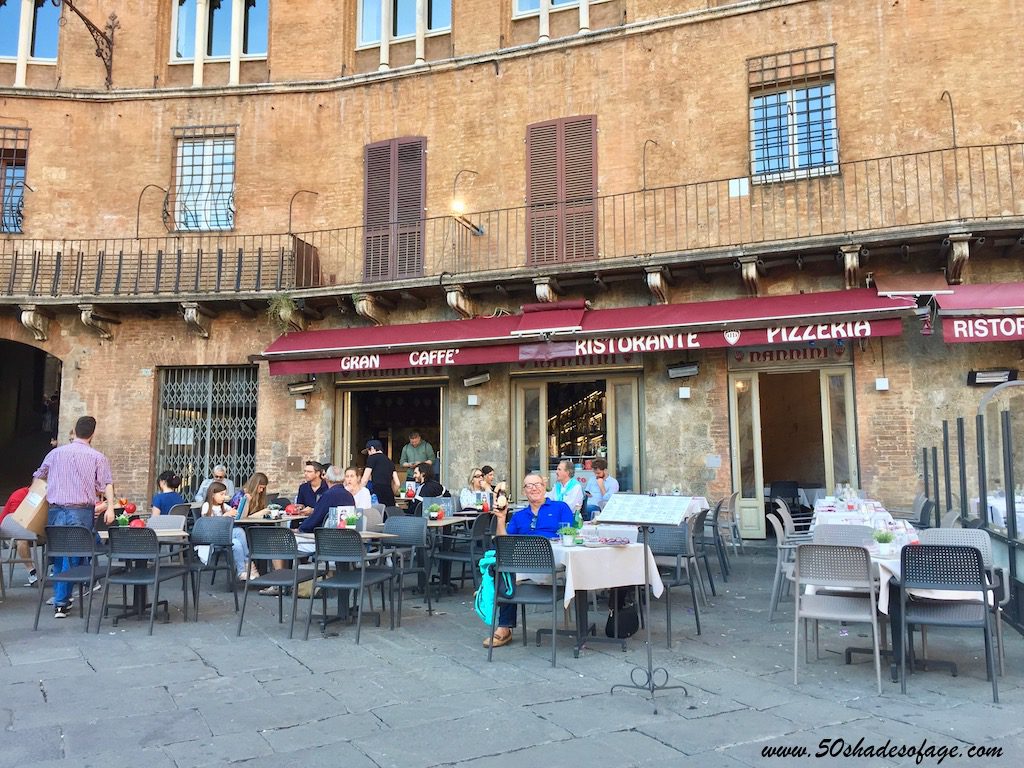 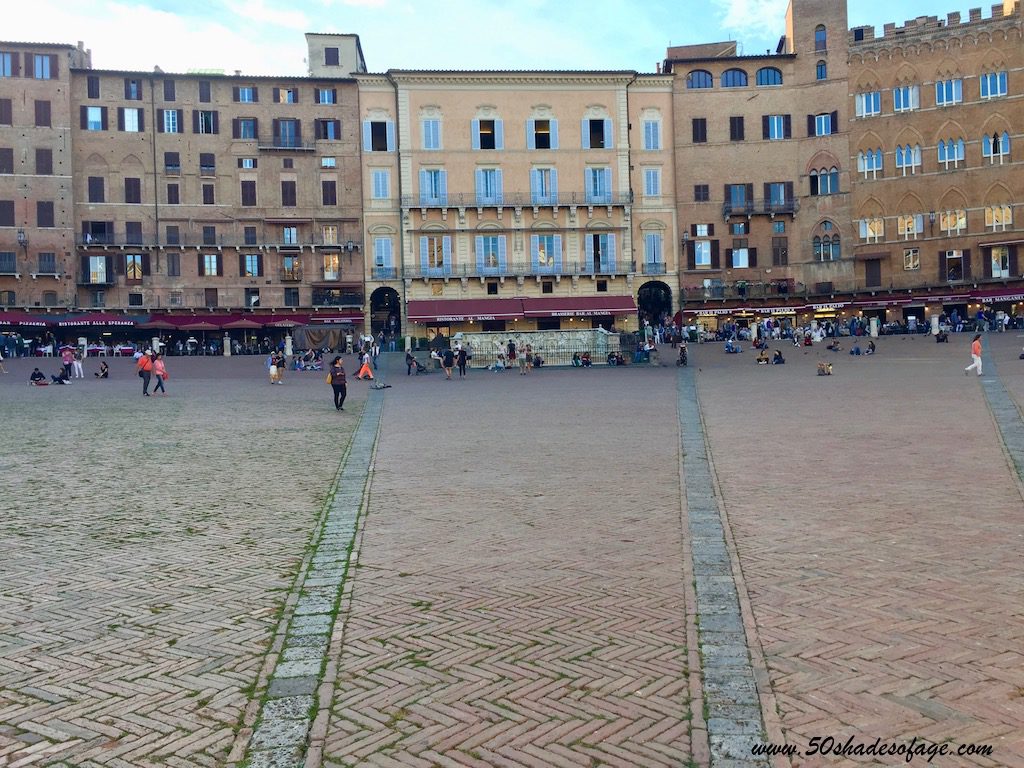 The distinct square, with a circumference of 333 metres, is paved with a fishtail design of red brick divided by 10 lines of white travertine stone creating a shell like appearance with 9 sections pointing directly to Palazzo Pubblico. 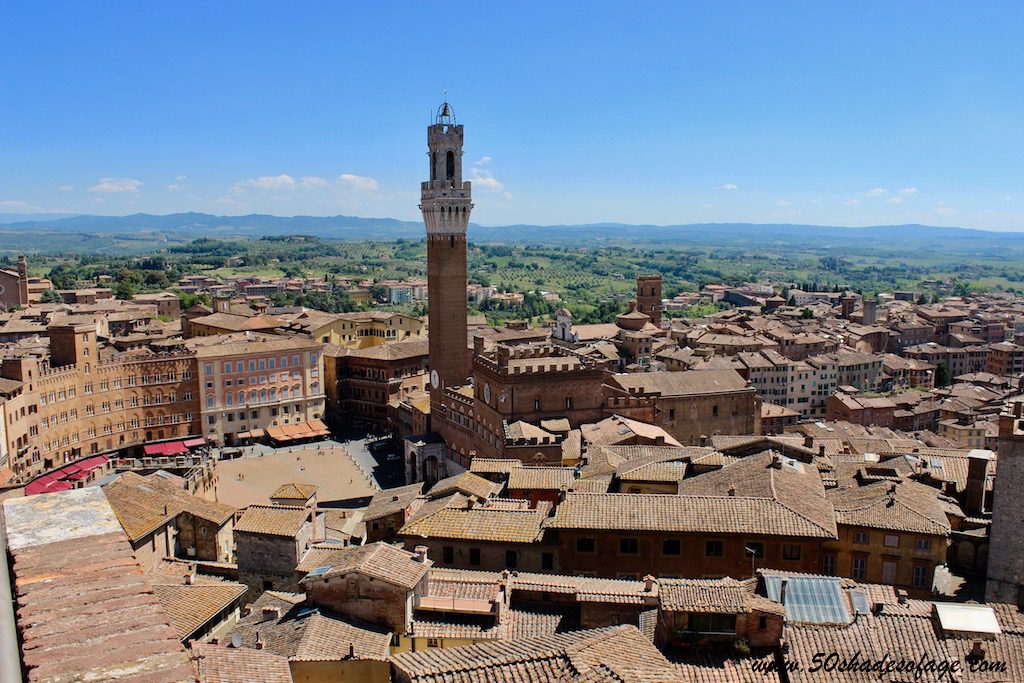 The Palazzo Pubblico faces Piazzo del Campo – where the entire medieval population would meet for civic and cultural affairs. These days it now houses the Civic Museum with its many famous masterpieces of Sienese art. 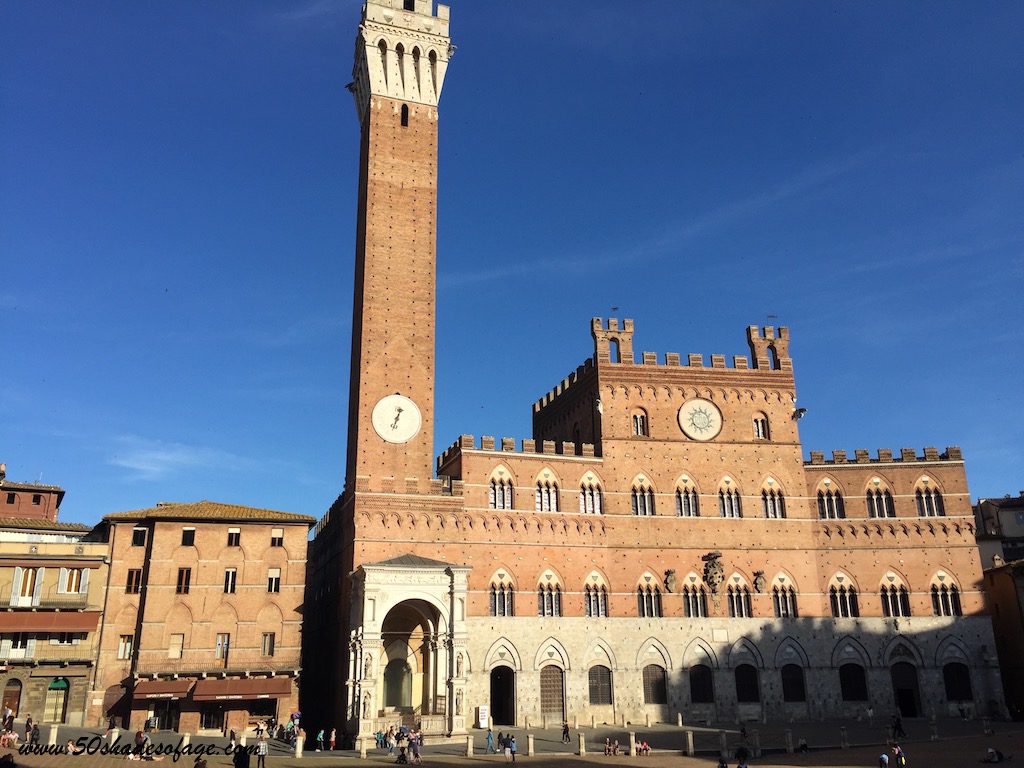 The imposing  Torre del Mangia is 102 metres tall to the tip of the lightning rod. Constructed between 1325 to 1348, it is built of the typical terracotta coloured brick and topped with white travertine. 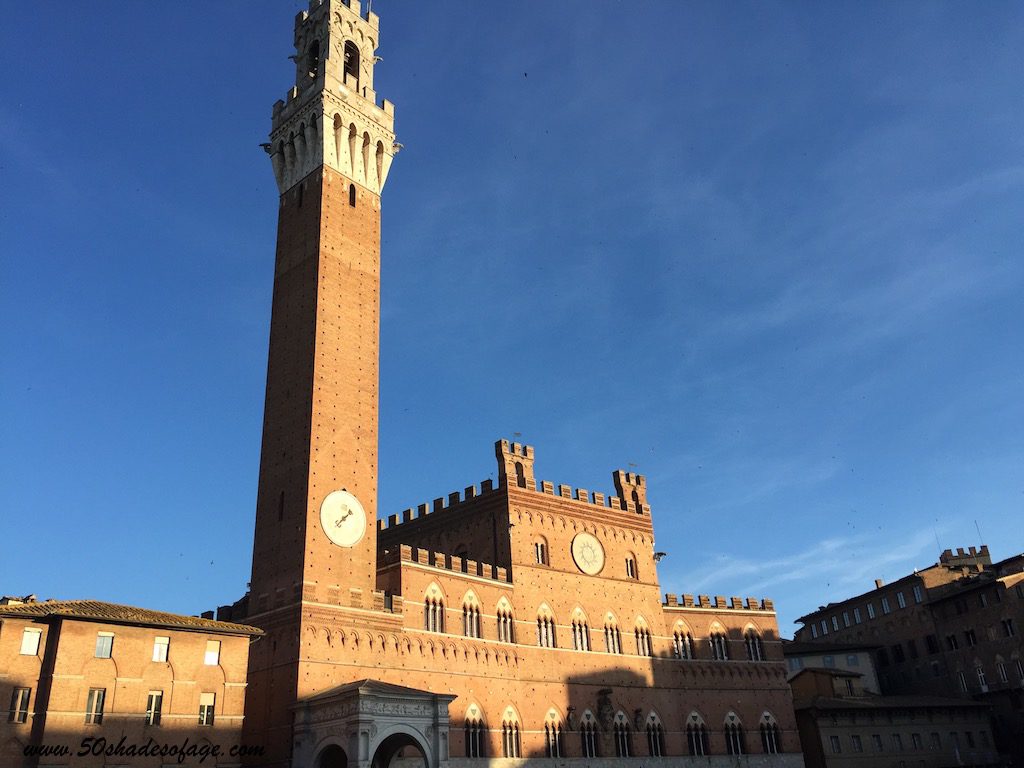 The Fonte Gaia or Gaia Fountain was the pride and joy of Siena built in 1346. These days the evocative marble carvings that we saw are in fact copies of the original, commissioned in 1409 by Jacopo della Quercia. 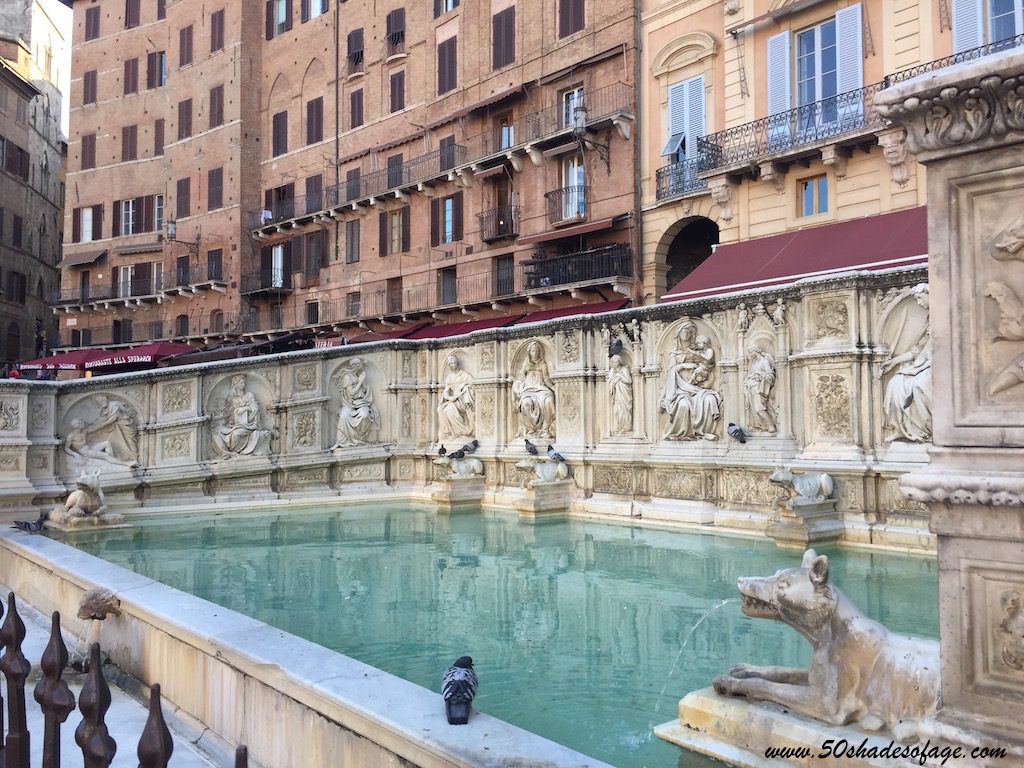 After dinner we strolled back to our apartment for an early night. Next morning we set off early to see the exquisite Siena Cathedral, built between 1215 and 1263. We’re not normally that into grand churches, because once you have seen one you have seen them all, or so we thought. However we were completely blown away by this Gothic style church and the artwork contained therein. 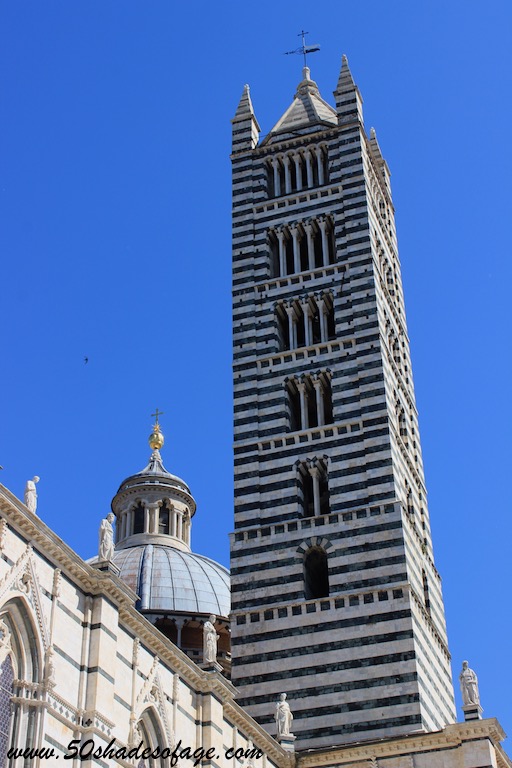 The exterior and interiors of this duomo or cathedral are decorated in white and greenish-black marble in alternating stripes, black and white being the symbolic colours of Siena. 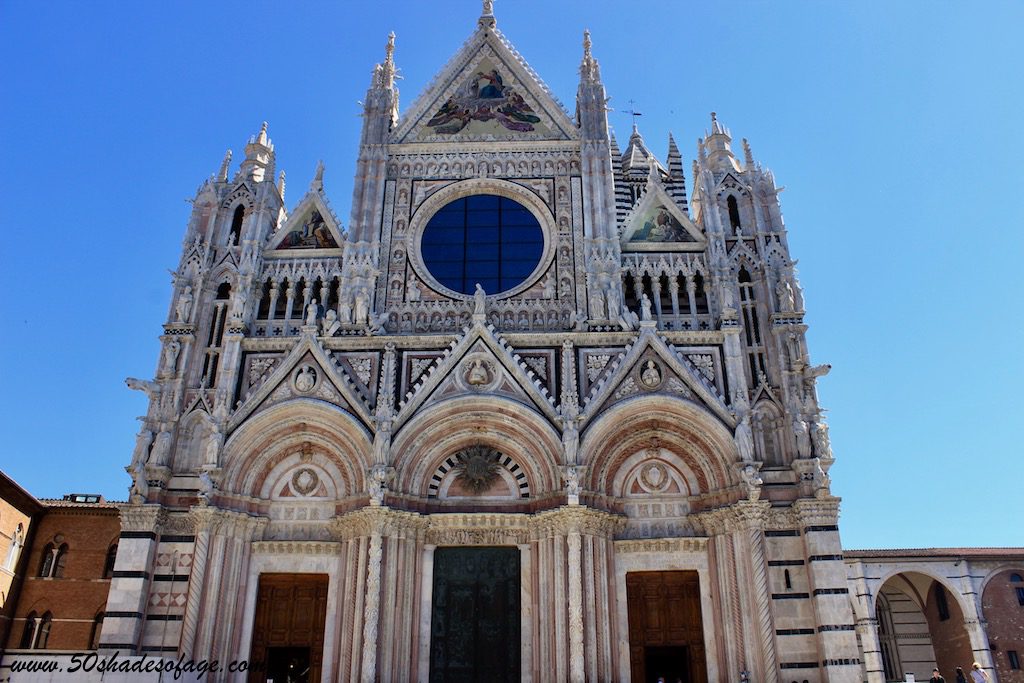 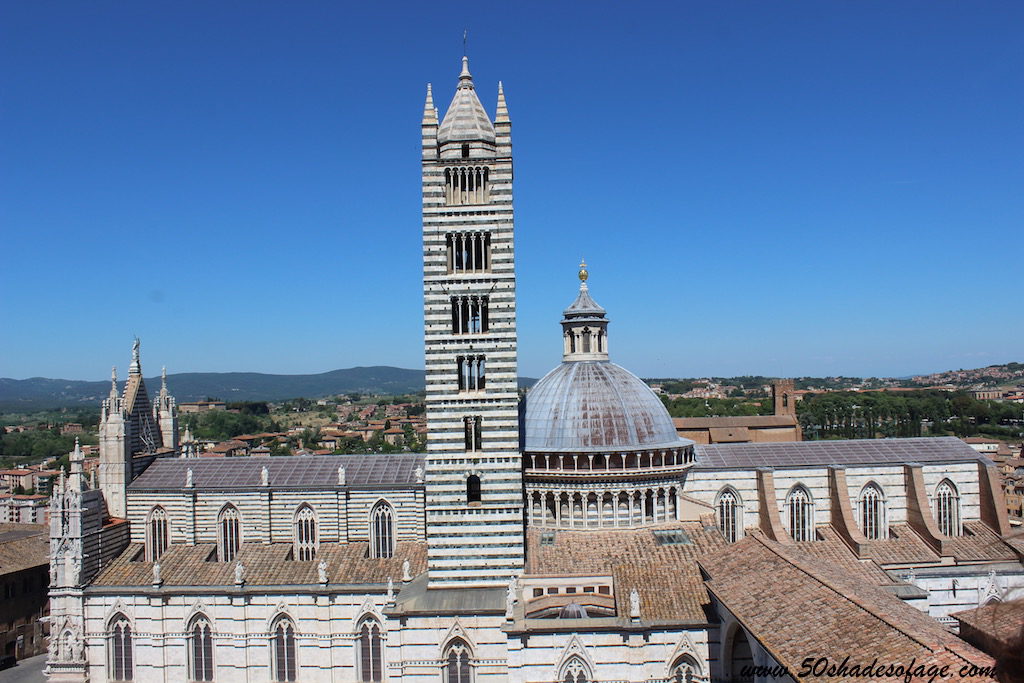 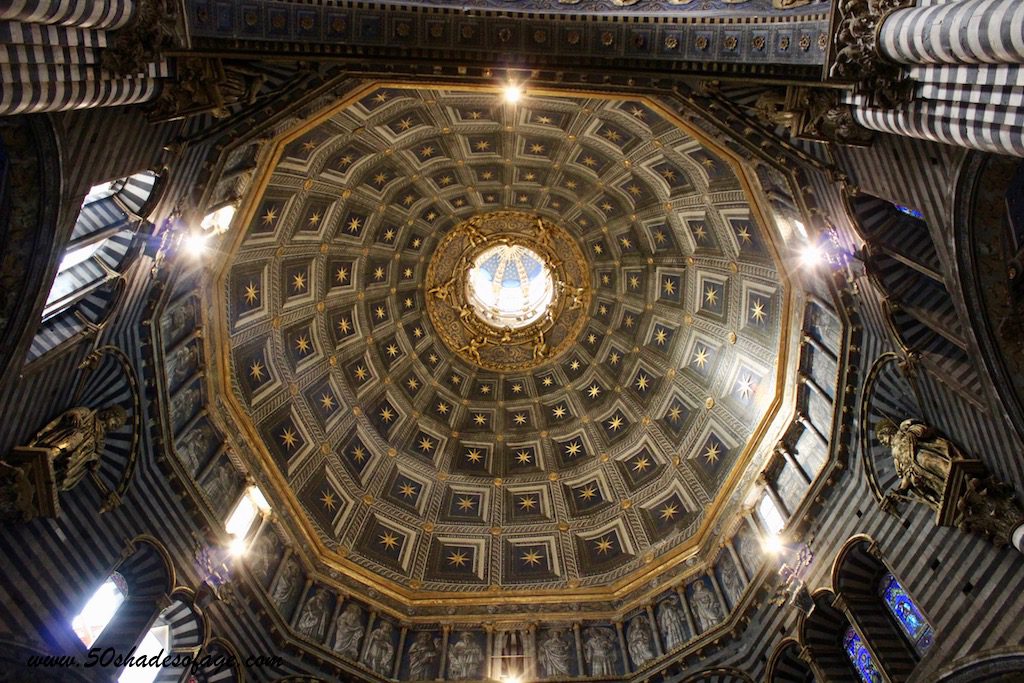 The Cathedral Dome from the inside

We purchased an Opa Si Pass for EUR 12 to visit the complex of Siena Cathedral, museum, tower, bapistry and crypt. These ancient buildings are filled with treasures by Pisano, Donatello and Michelangelo as well as frescoes by Pinturicchio. 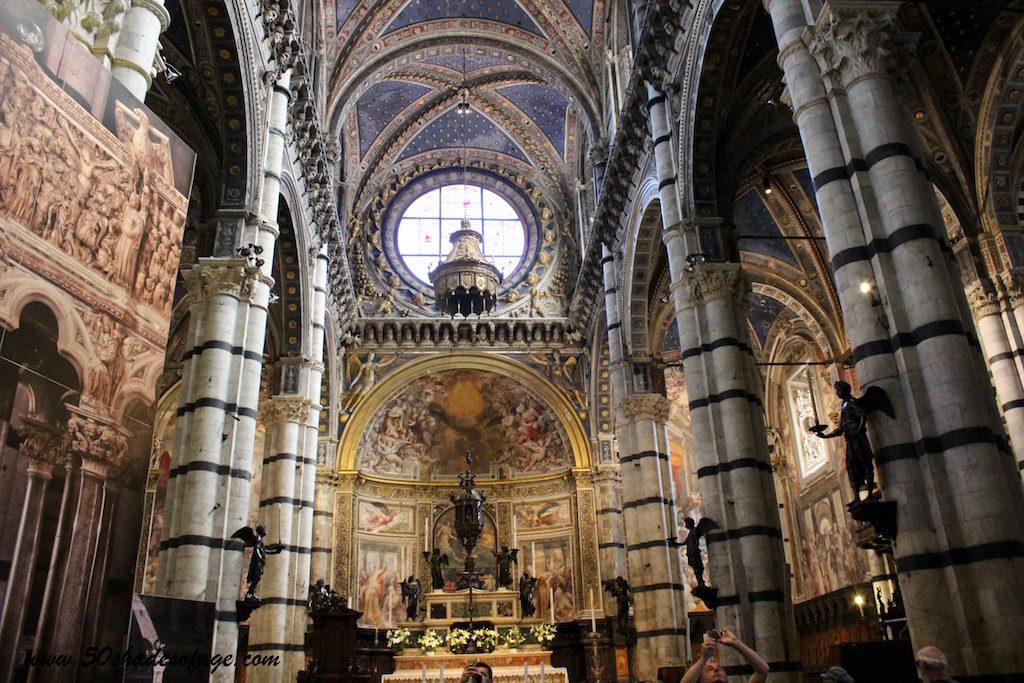 The interior of the Cathedral

The most impressive and beautiful of the treasures the cathedral holds are on the floor, where the pavement is decorated with the art of mosaics to create storytelling masterpieces. 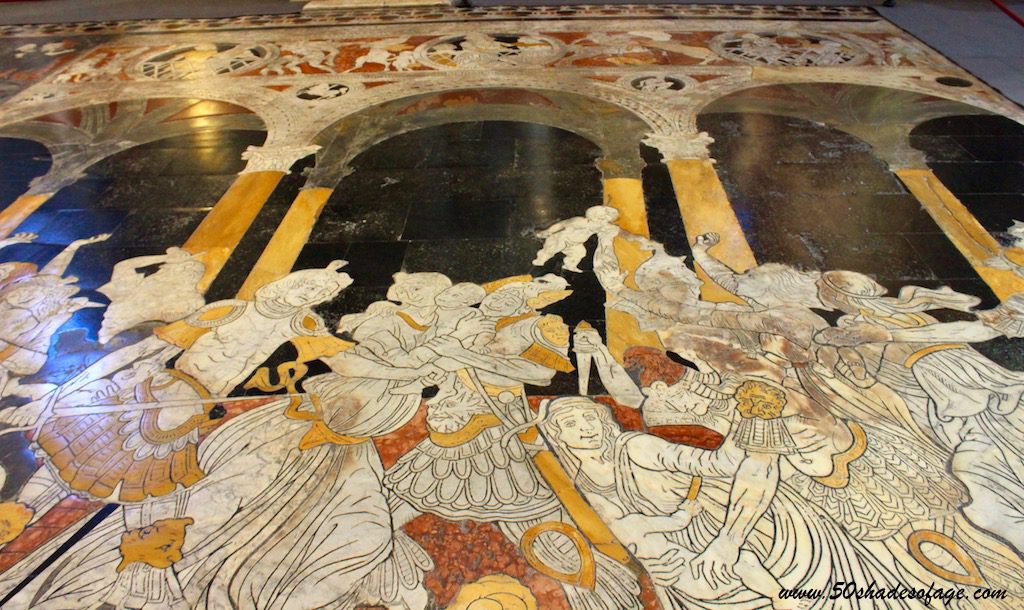 The mosaic floors in the Cathedral

After spending our time with mouths gaping in awe of the ornate interior of the cathedral, we stepped into the Piccolomini Library. It was built by Pope Pius II’s nephew, also a cardinal who also later became Pope Pius III, the library was in memory of his uncle and to conserve the rich collection of manuscripts he had lovingly collected. 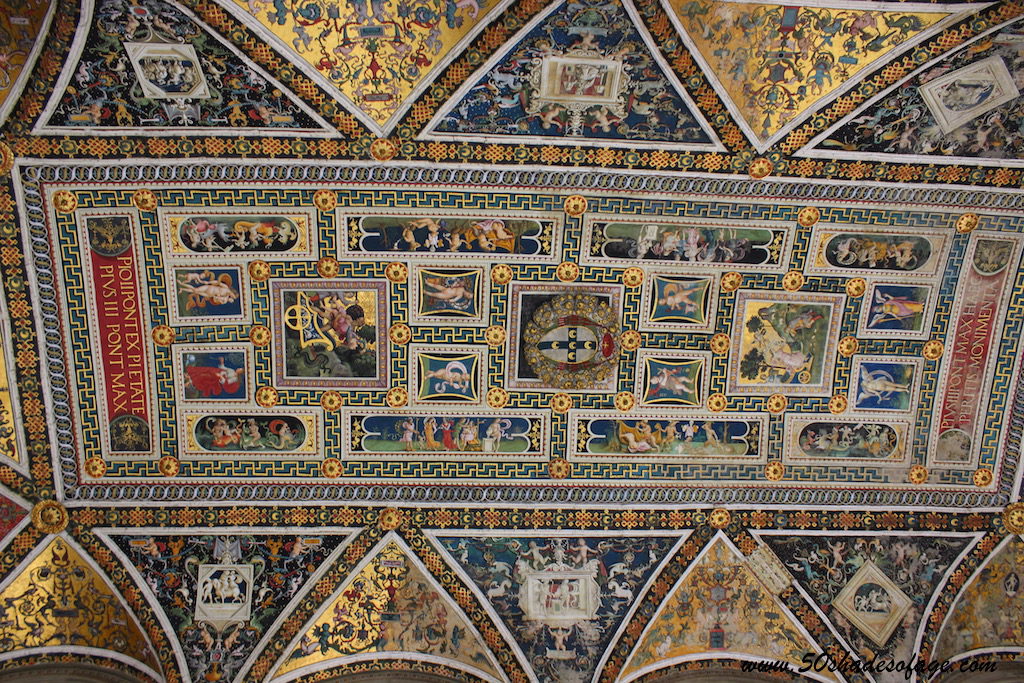 The ceiling of the library is ornately frescoed with its main rectangle and half voltas painted in blue, red and gold with grotesque designs.

Next we visited the Museum dell’Opera that contains many of the original art pieces from the Cathedral. 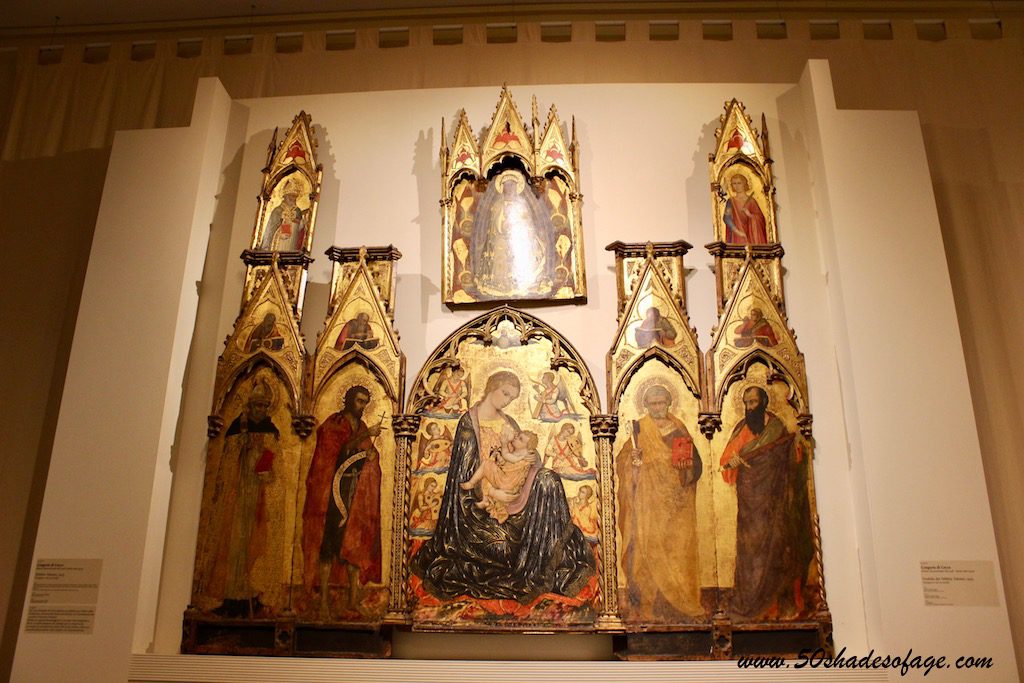 One of the fine pieces of art in the Museum 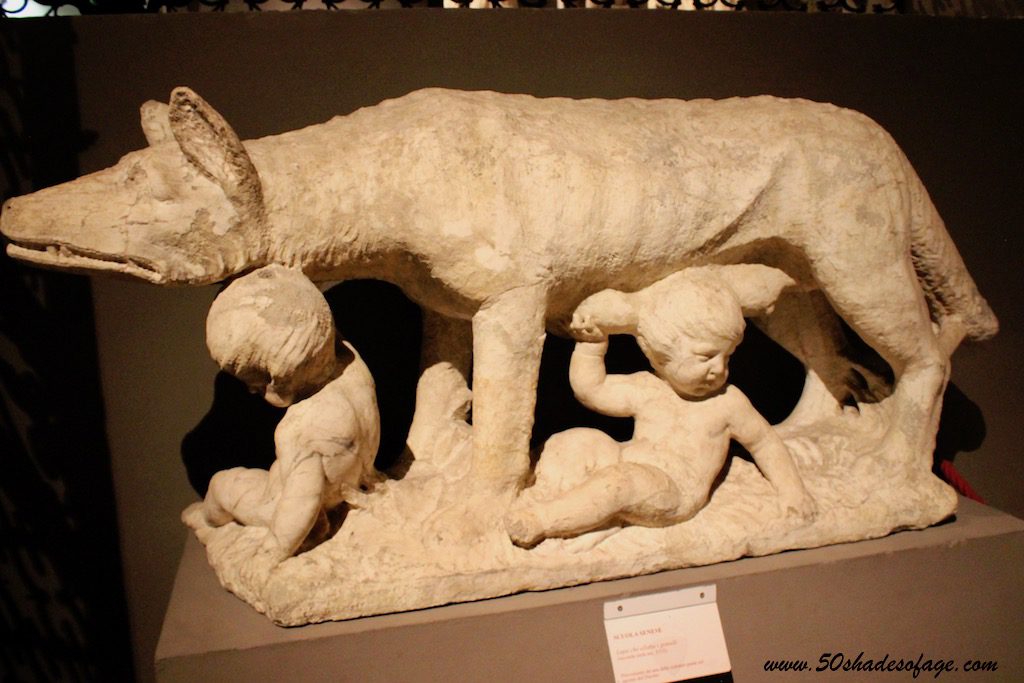 The most popular part of the museum is the panoramic view point at the top where you will have a magnificent view of the Cathedral as well as the rooftops of Siena and the Tuscan hills. We were fortunate because normally you need to wait in line for a while before starting the climb up the very narrow winding staircases, but we went straight up. Let me tell you it was worth the claustrophobic climb! 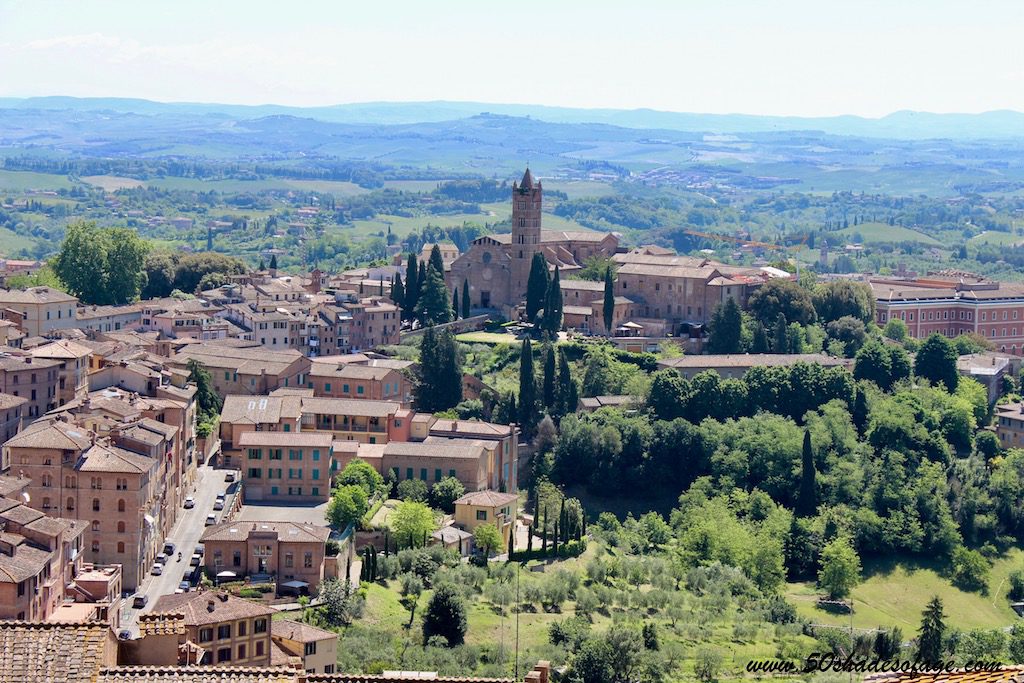 Although we had a little trouble fining the entrance to the Crypt of the Cathedral, we eventually found it around the rear. Discovered in 1999 and opened to the public in 2003, the Crypt is one of the most important newly discovered archaeological sites. It was constructed at the same time as the Cathedral in the 13th Century. Its walls are painted with very colourful frescoes from Jesus’ life just before his death until his burial. It was an ethereal experience being in the bowels of such an ancient site. 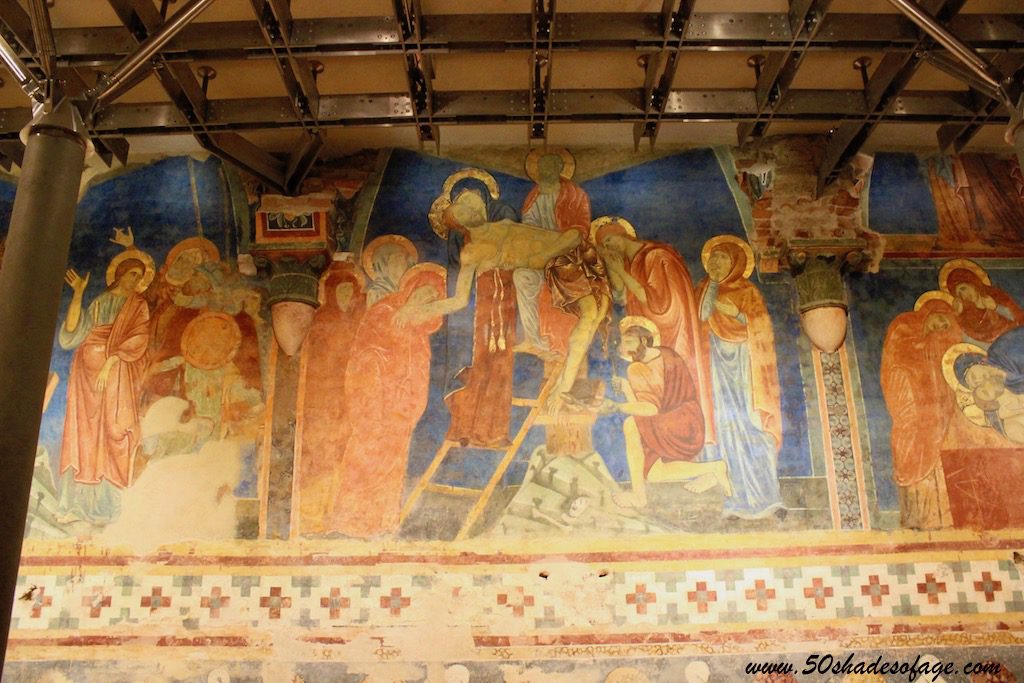 One of the delicate frescoes in the Crypt

After several hours of touring the Siena Cathedral we eventually surfaced into the square that surrounds the church. Located right in front of Siena’s majestic duomo, the Santa Maria della Scala is one of the oldest “hospitals” in Europe. The complex today is an important and huge museum displaying important artworks. It is quiet extensive, spread out over 3 floors, so you need several hours to see it all. 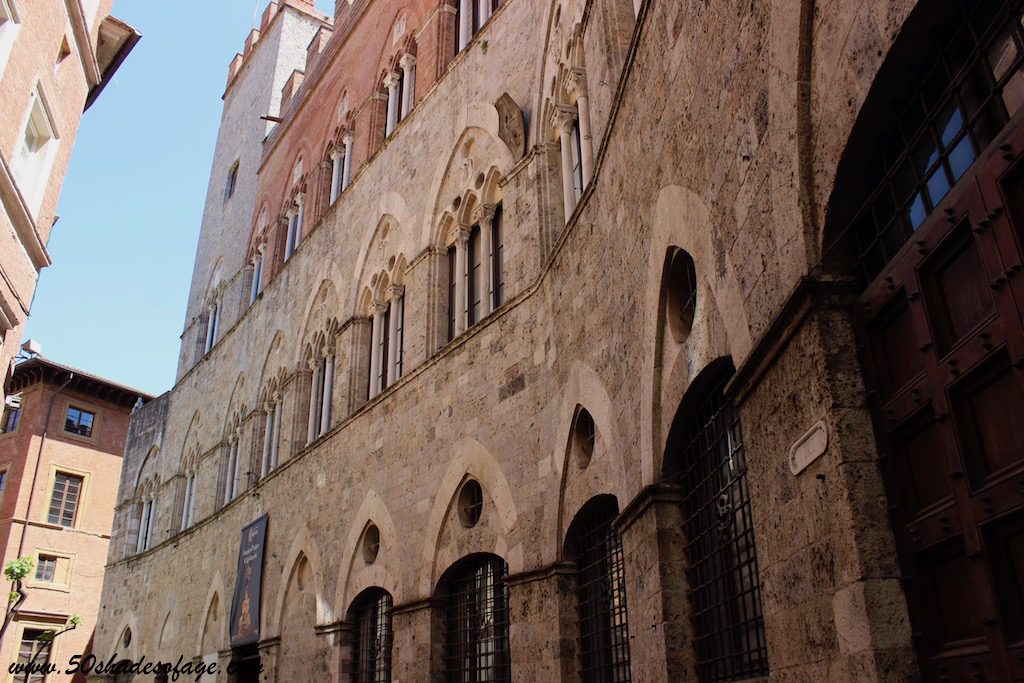 Once we wandered back into the maze of streets of Siena Old Town, we came across many other interesting buildings and museums. The 14th century Palazzo Chigi Saracini, once a palatial home of a famous Sienese family, currently houses the prestigious Accademia Musicale Chigiana founded in 1932. An impressive art collection and library is still kept within the Accademia. 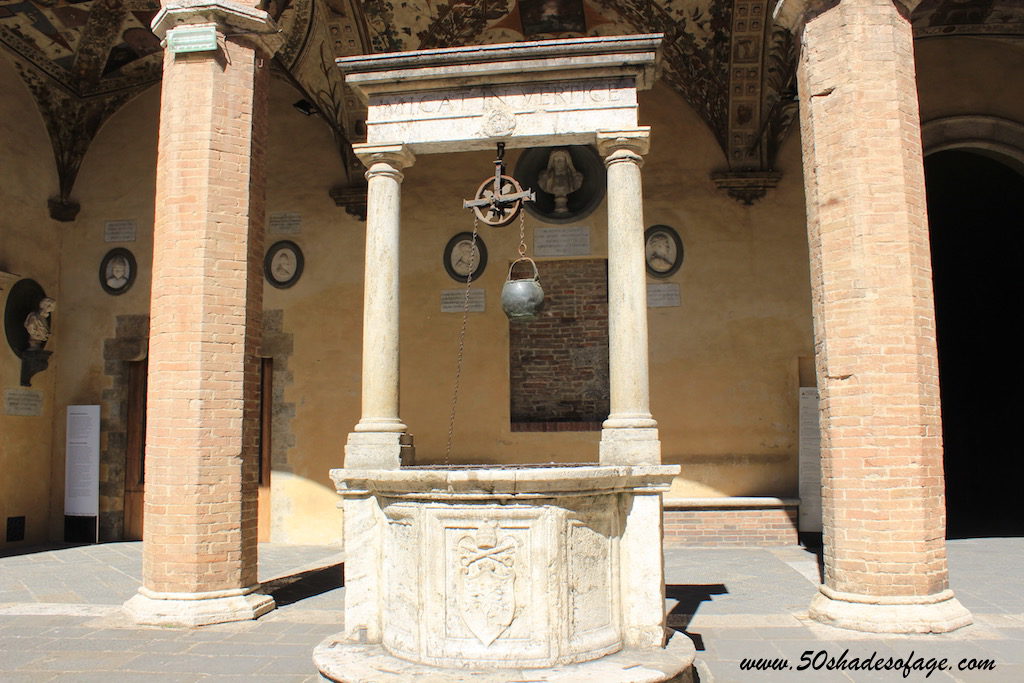 Wishing well in the courtyard of Palazzo Chigi Saracini

Further along we came to the Palazzo Salimbeni, one of the most beautiful examples of Italian architecture in Siena. Constructed in neo-gothic style the palace was used as a bank for centuries and has three floors. Inside is the historical archive of the bank and a picture gallery. 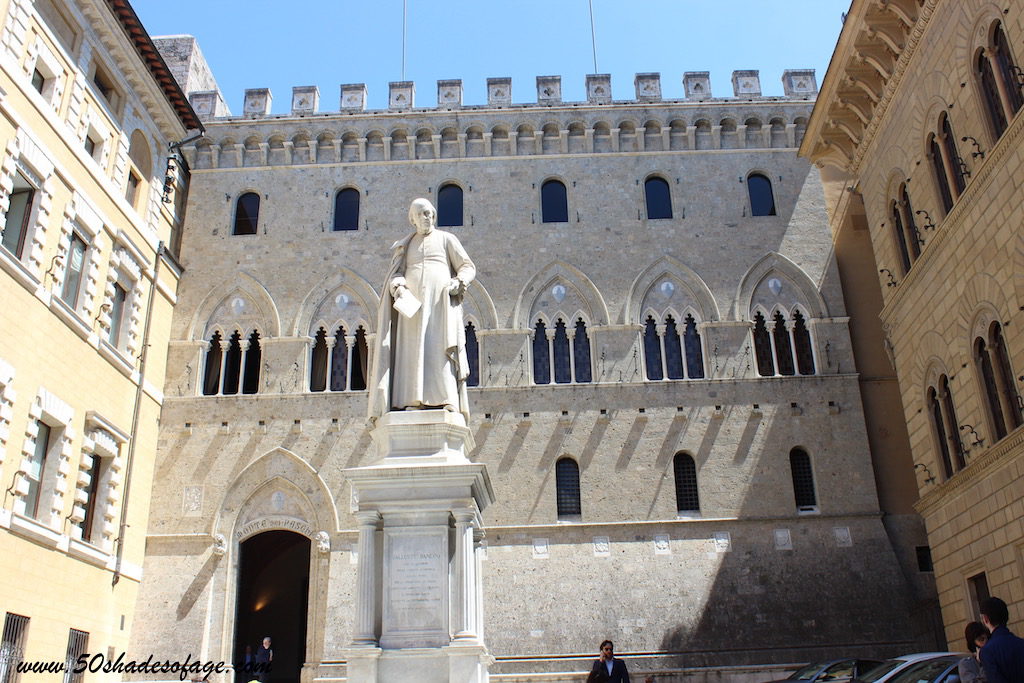 As we continued our stroll back through the streets of Siena there were many more extraordinary buildings, monuments, little churches and small squares that simply took our breath away. 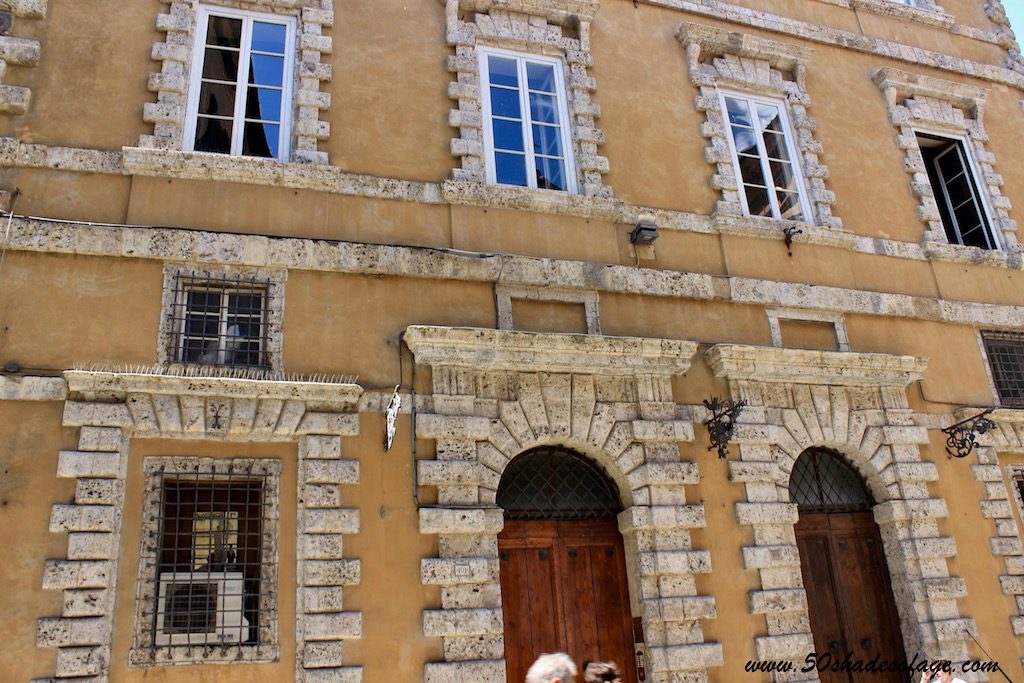 Another example of a Siena building

For our first taste of Tuscany it was a pretty good entree, or should I say aperitif? Siena certainly earned a place in my heart as one of the prettiest medieval towns in the region. It was a divine experience, in more ways than one, and I was so glad that we chose to stay one night here instead of Florence.

Spread the love
Italian HolidaySienaSiena ItalyTuscan Medieval TownsTuscany
By 50 Shades, September 13, 2017 Kathy was a 50 something year old when she started up this blog 6 years ago, but has since turned over another decade and is now in her early 60s. She is married with two adult children and lives on the Tweed Coast of New South Wales, Australia. Kathy enjoys living life to the fullest and loves to keep fit and active by maintaining a healthy diet and exercising regularly. Some of her interests include reading, photography, travelling, cooking and blogging! Kathy works part-time as a freelance writer but her real passion is travelling and photographing brilliant destinations both within Australia and overseas and writing about it.