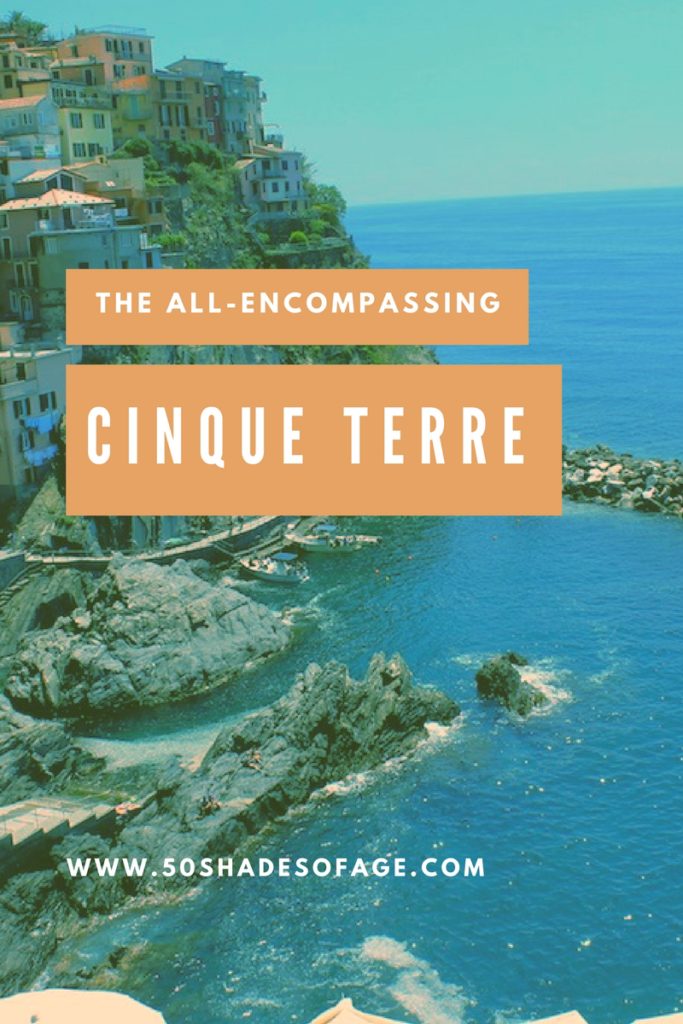 Reluctantly we departed Lake Como after four amazing days here and set off towards the town of Parma, where we said goodbye to our friends and boarded a rather ramshackle train to La Spezia. From here we boarded a shiny new train to the string of coastline on the Italian Riviera, know as the all-encompassing Cinque Terre.

Within minutes of departing La Spezia we started to get glimpses of the dramatic coastal scenery of Cinque Terre, that is actually made up of a string of five little fishing villages: Riomaggiore, Manarola, Corniglia, Vernazza and Monterosso. We couldn’t believe our luck because the weather was spectacular – nothing but blue skies and the temperature was in the mid 20s. 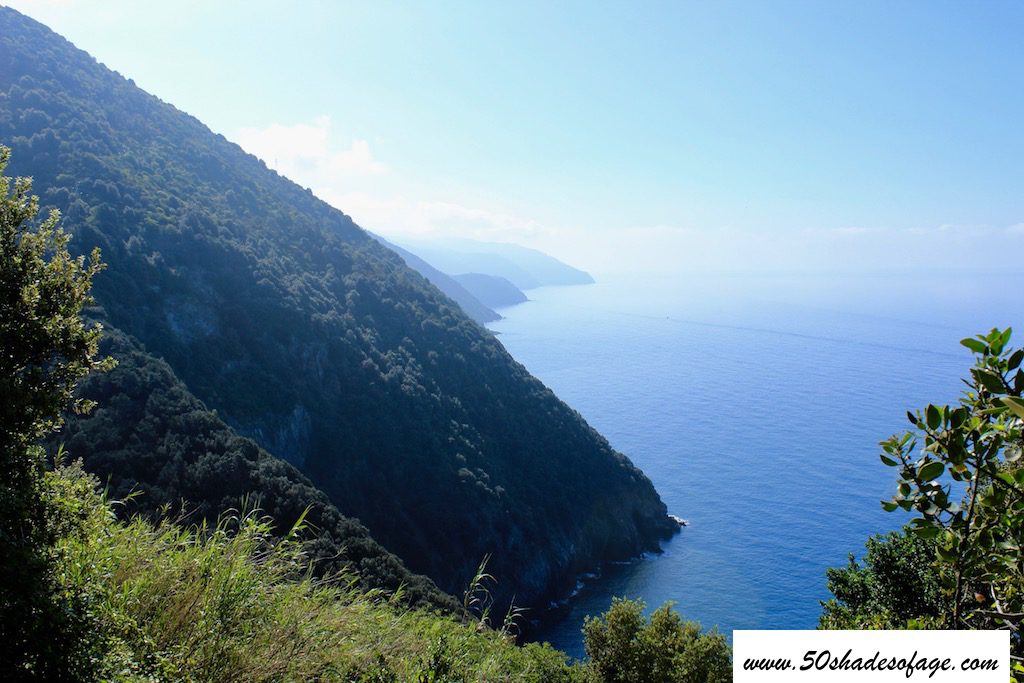 Our accommodation for two nights was in Monterosso al Mare at the Hotel Palme, that despite being listed as a four-star hotel, had very small dingy rooms that lacked air conditioning or any form of ventilation. But no matter, we weren’t planning on spending too much time in our room because we intended to do lots of exploring. 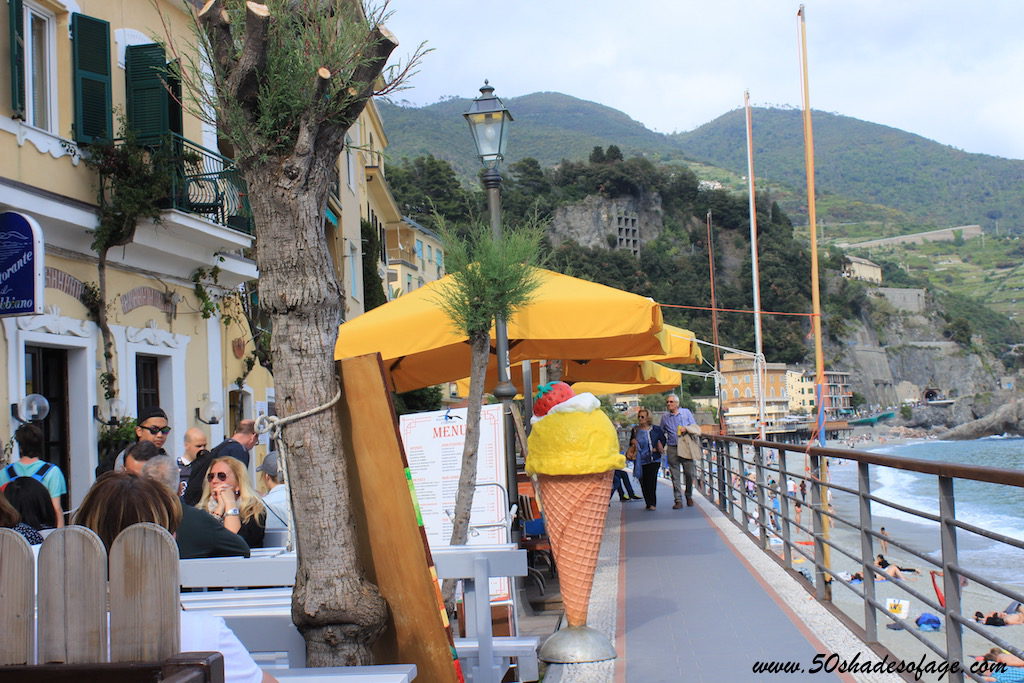 Monterosso al Mare is the furtherest north of the five and also boasts the longest sandy beach and flattest terrain of all of the villages. For this reason it is probably more suited to those who don’t want to negotiate too many stairs or steep inclines. 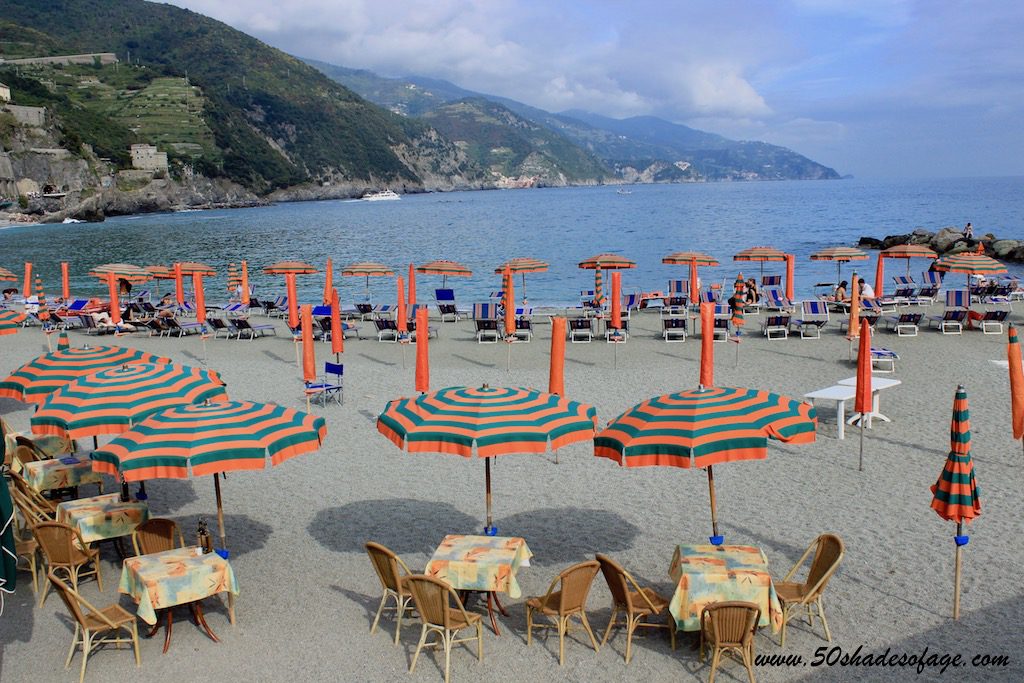 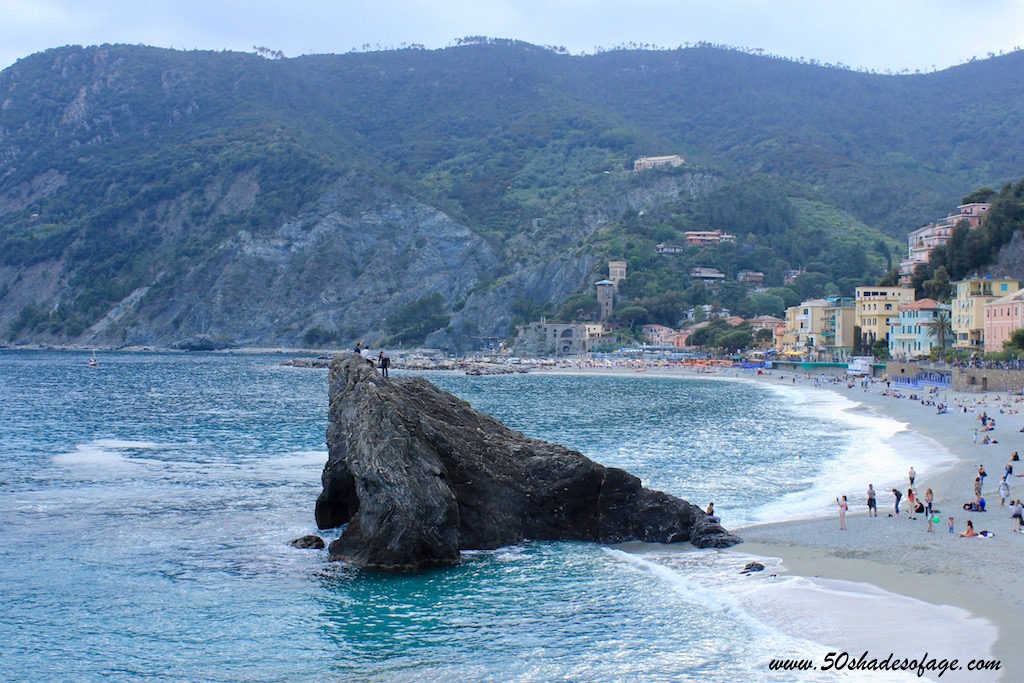 There are two parts to the village: the old town and the new town, separated by the San Cristoforo hill which are connected by a pedestrian tunnel. 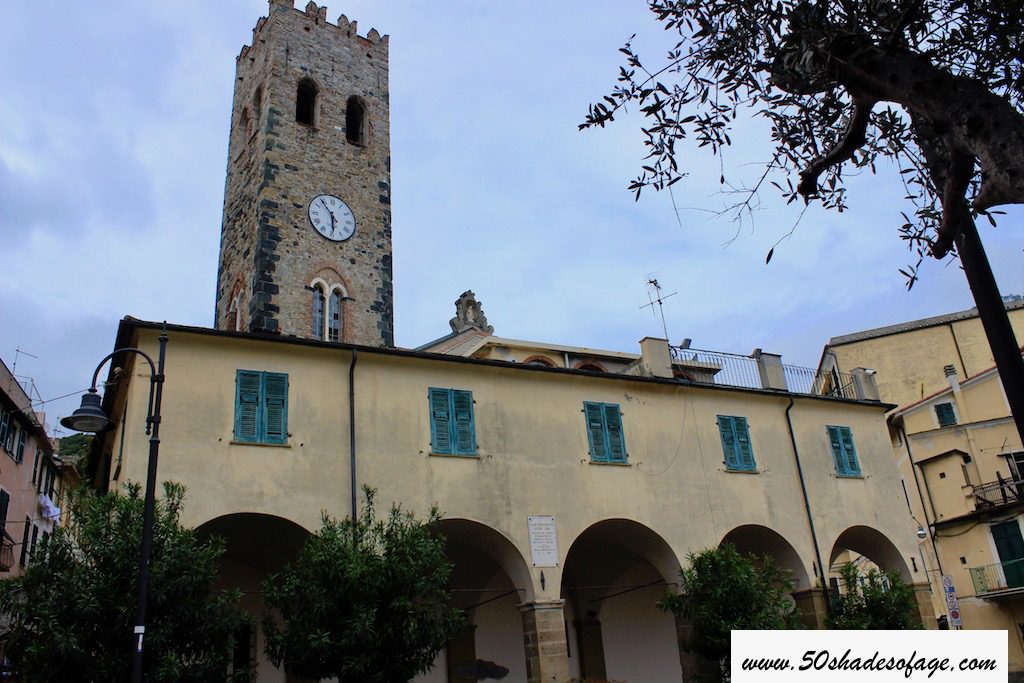 There is a pretty promenade lining the beachfront with a few bars and restaurants serving drinks and food. The beaches are adorned with colourful umbrellas and sun lounges (that you rent by the hour) and incredibly, peddlers selling sarongs, that looked like they were fresh from Thailand! 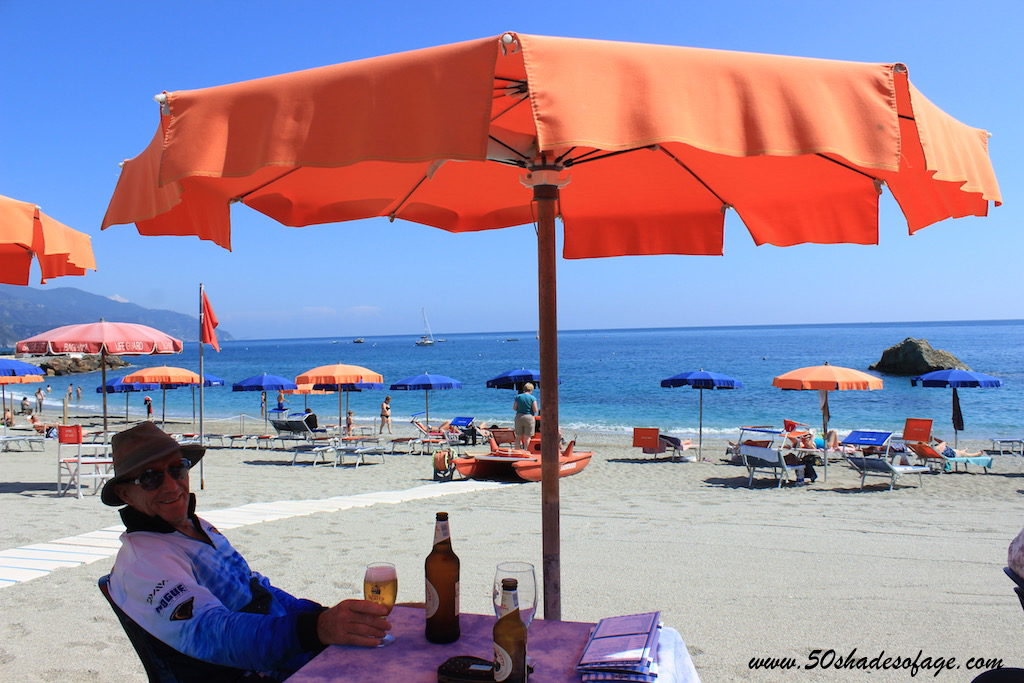 We discovered the best views by hiking up San Cristoforo hill, where we admired the entire Cinque Terre coastline. Once we got to the top, we spent some time here, visiting the Convent of Cappuccini, the Church of San Francesco and the cemetery. 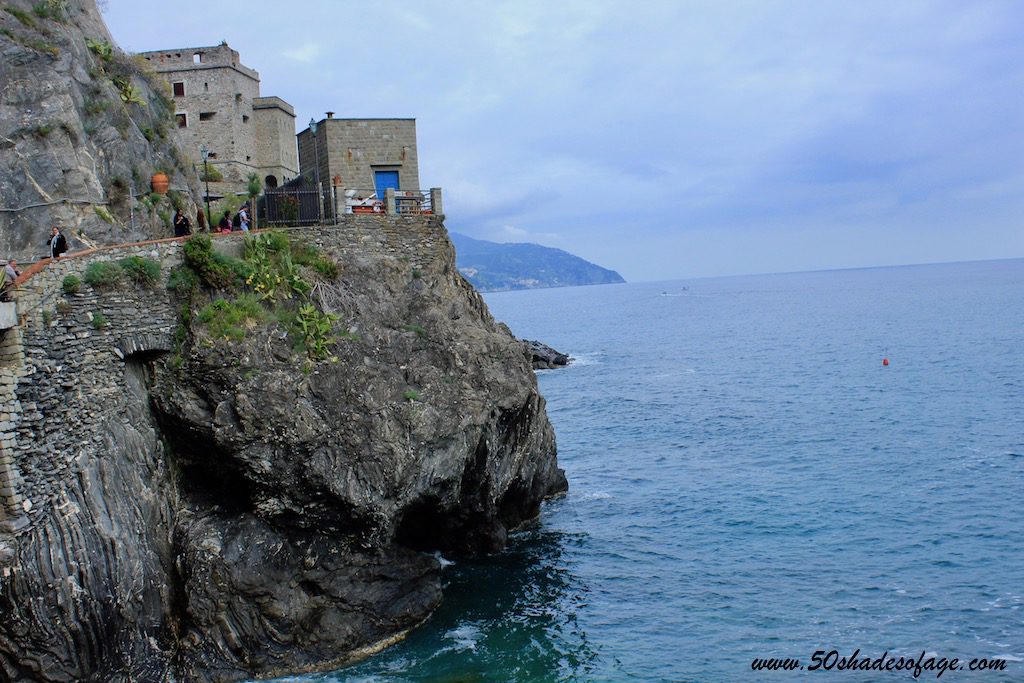 The statue of the Giant can be found between Fegina beach and the small harbour. The Giant is actually Neptune, the god of the sea and he is holding the terrace of an old villa on his shoulders. 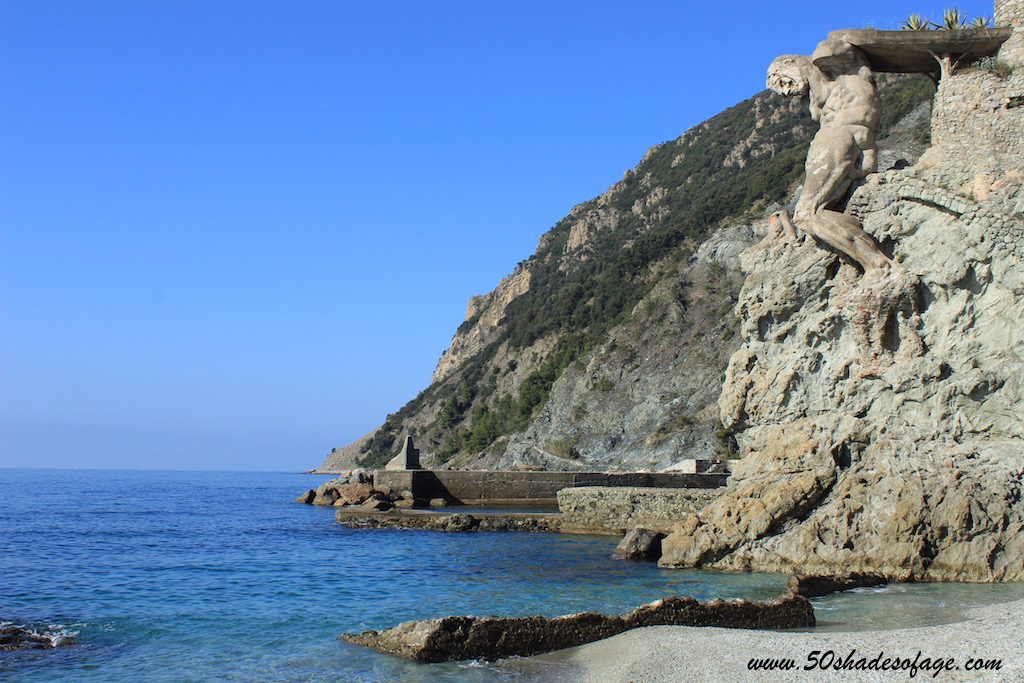 Giant Statue of Neptune at Monterosso

We left our hotel early to set off on the old mule tracks to hike towards Vernazza. The famous Sentiero no. 2  trail or Sentiero Azzurro connects the five villages of the Cinque Terre and is about 11 kilometres long and takes an estimated 5 hours to walk. 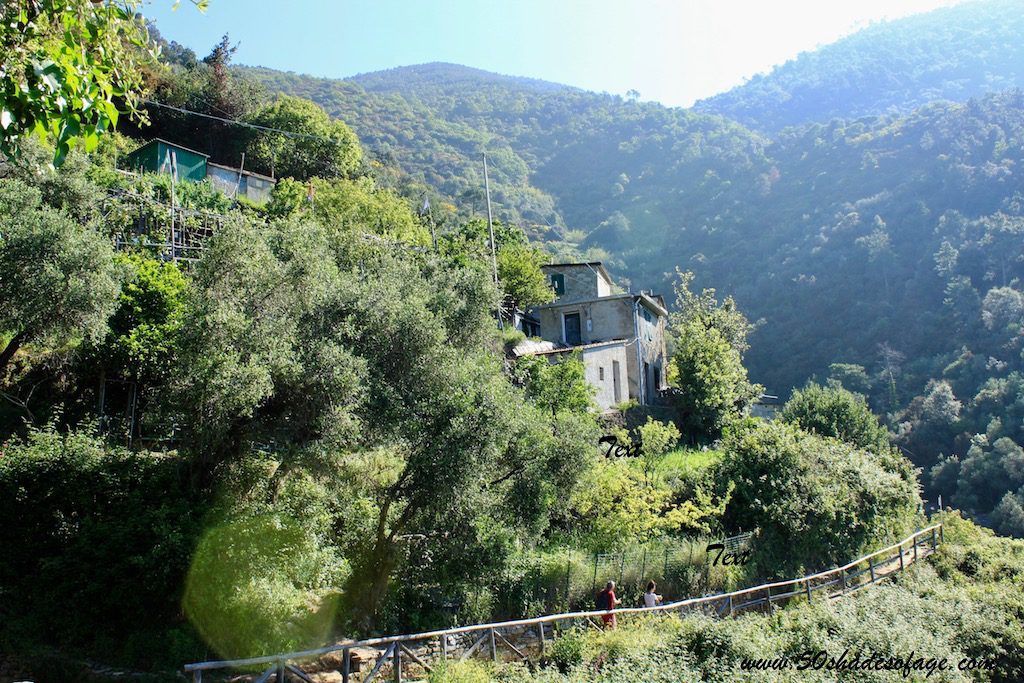 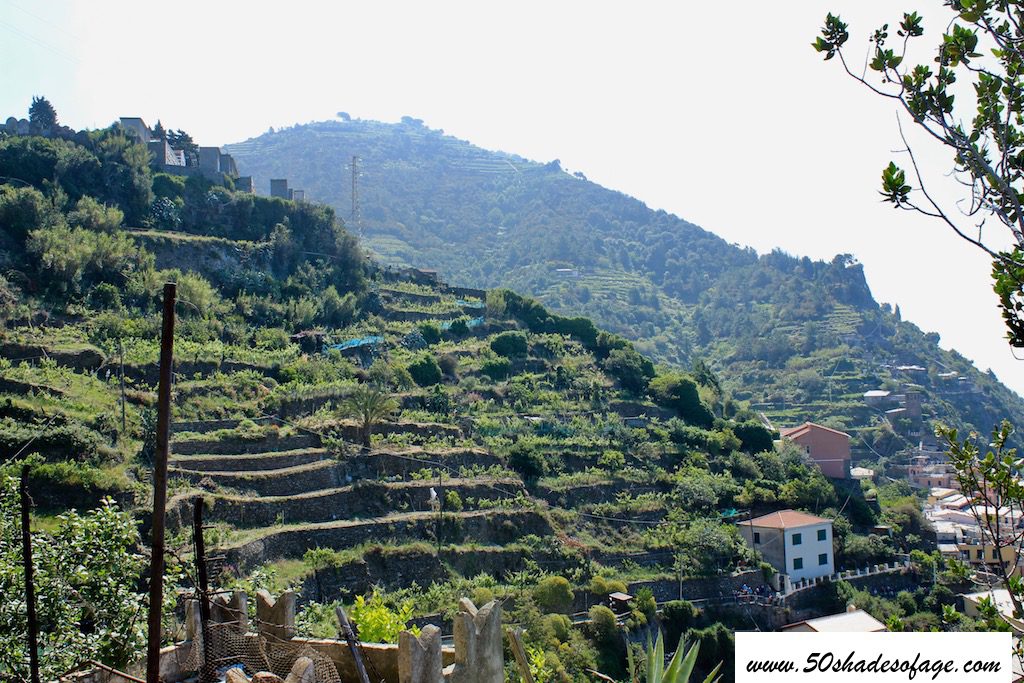 Terraced groves of the Cinque Terre

Once we scaled hundreds of stairs to the top of the hillside, the views back over Monterosso and the deep blue turquoise seas were amazing. We had to keep stopping to take in the panorama of the dramatic Cinque Terre coastline. 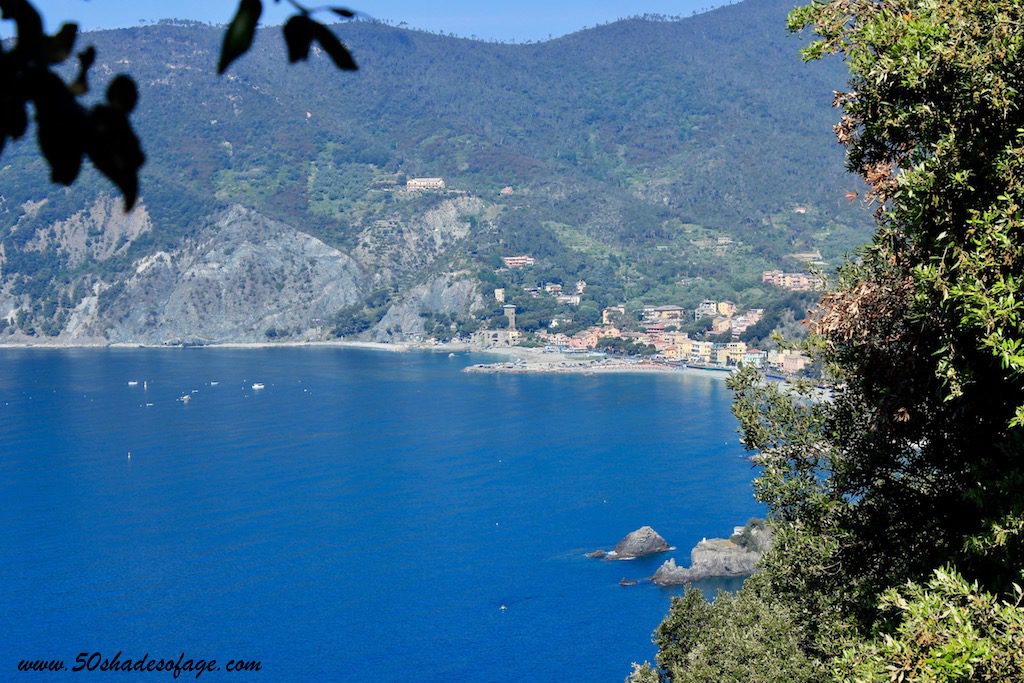 Views back over Monterosso from the walking trail 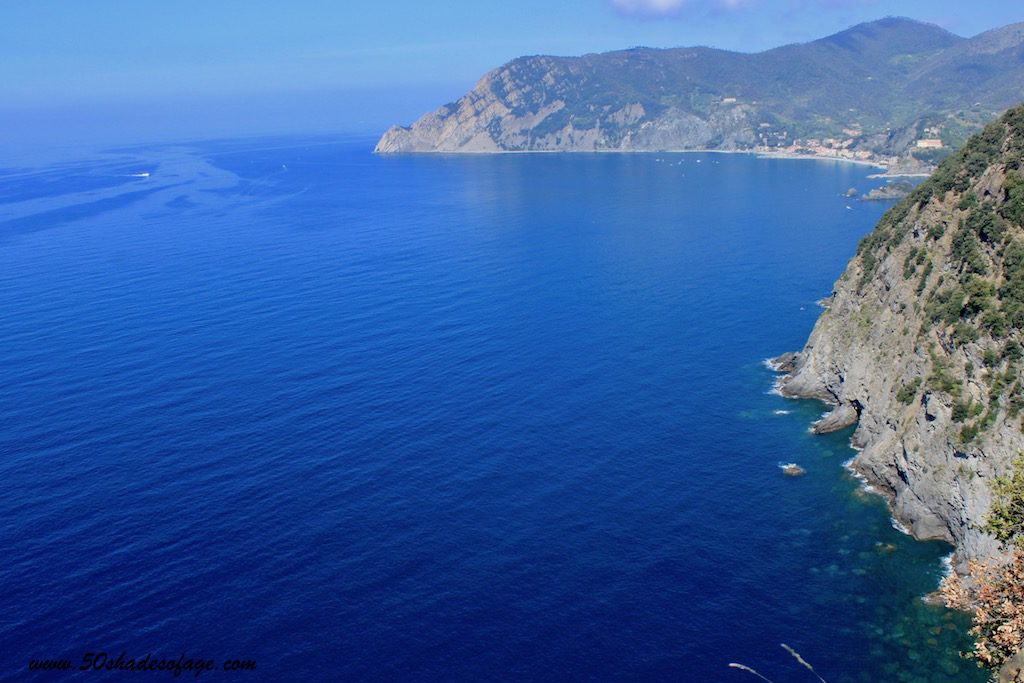 The panorama of Cinque Terre coastline from the walking trail

We got as far as Vernazza and we were spent! It was a warm day and after climbing hundreds of stairs, getting covered in dirt and dust, we needed to rest for a while. 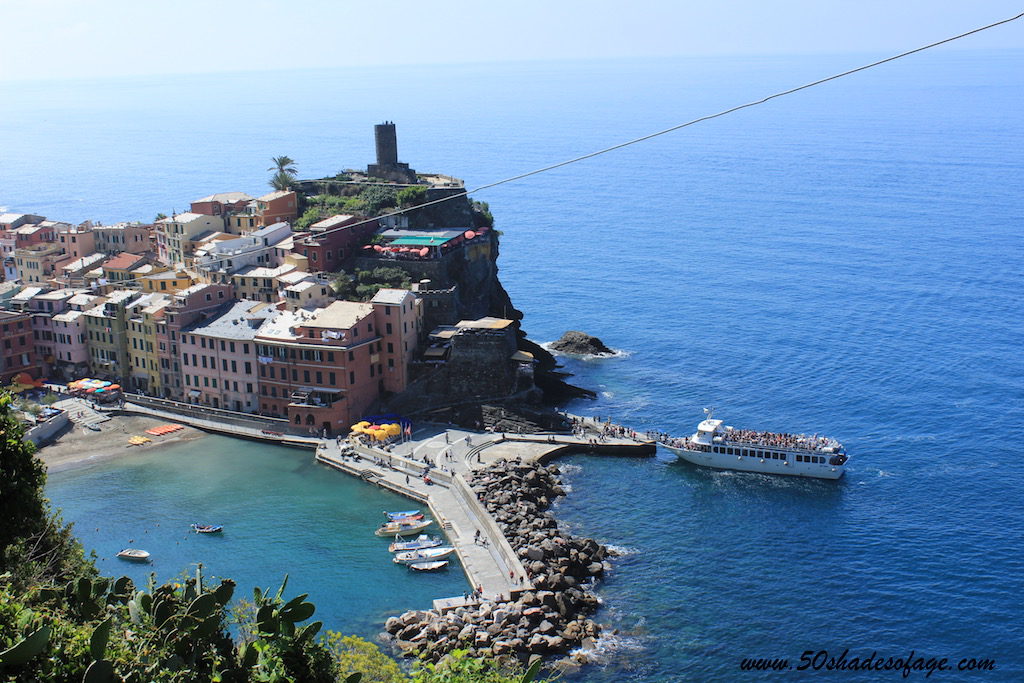 Views of Vernazza from the walking trail

Having just left the Lake Como village of Varenna, it was a little confusing for us at first to get our head around the name of this village – Vernazza. We had travelled through the city of Verona, stayed in Varenna and we were now hiking to a village called Vernazza! So you can understand our confusion. 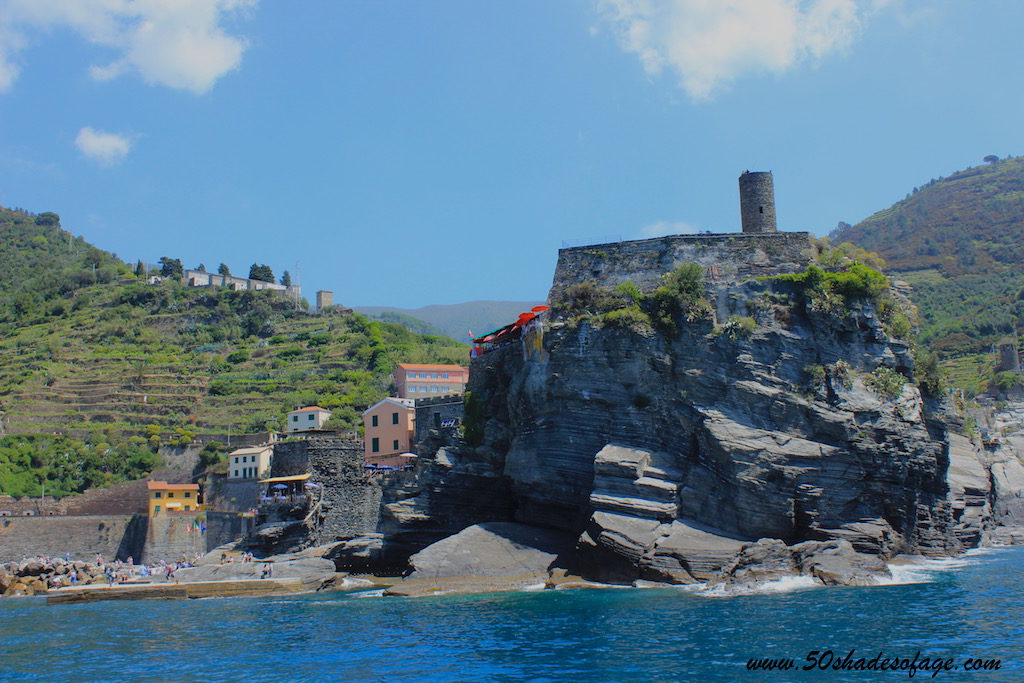 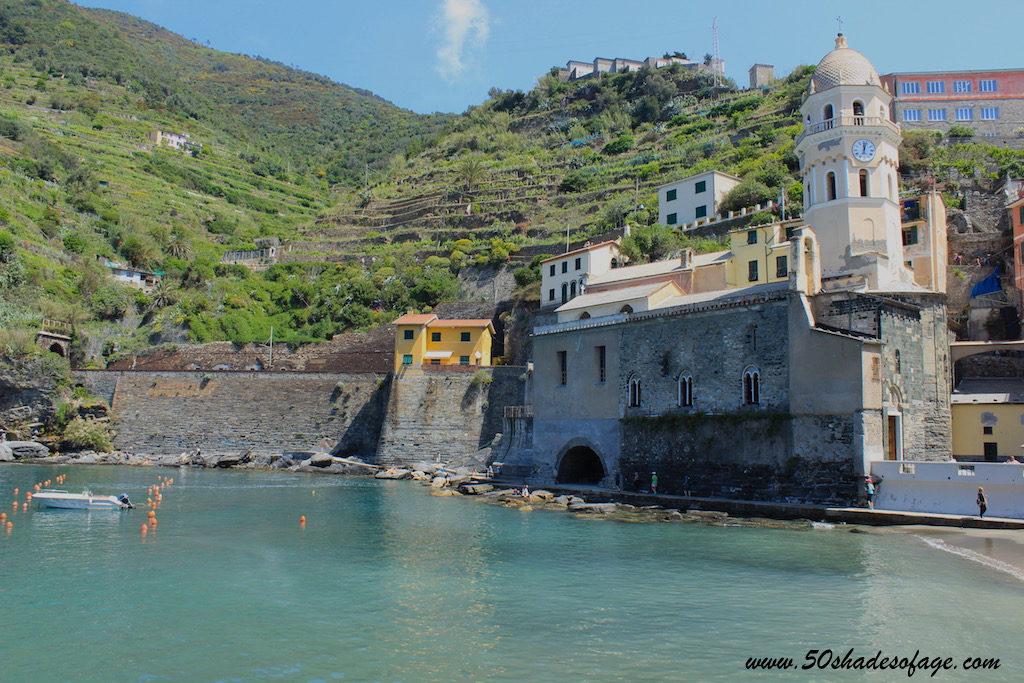 The village is surrounded by very steeply-terraced olive groves and once you start to descend down the steep mountainside the sight of Vernazza is breathtaking. I stopped many times to capture the beauty unfolding before my eyes. It was all-encompassing! 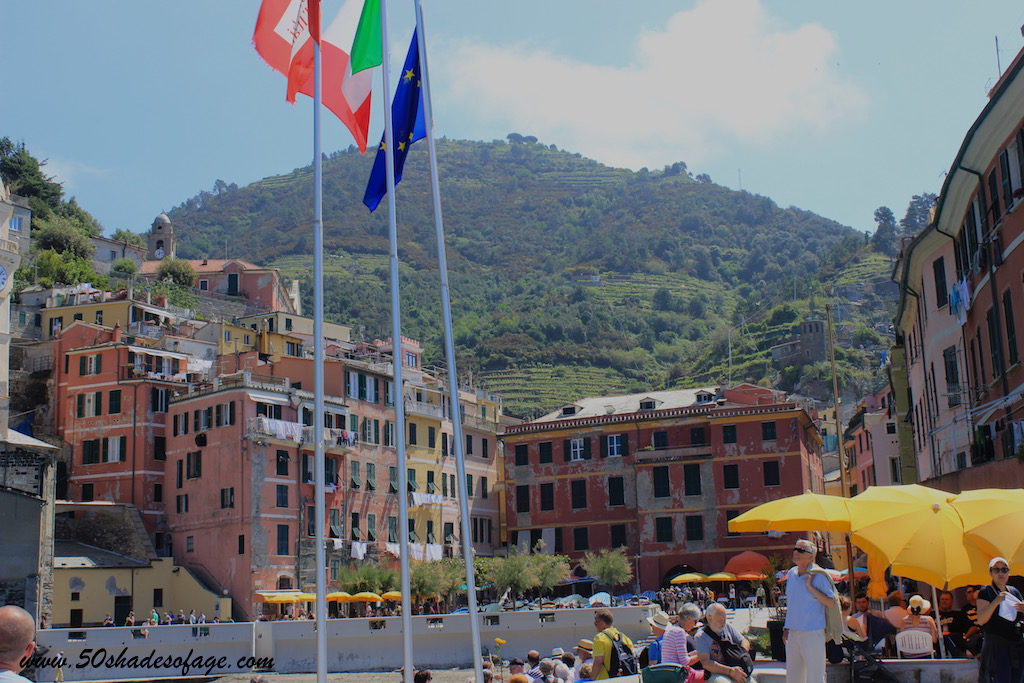 The village of Vernazza

Vernazza with its medieval castle and tiny port, is one of the prettiest villages along the Cinque Terre, because of its pastel coloured buildings. Here you will find narrow little laneways and a charming piazza lined with good restaurants, bars and shops. 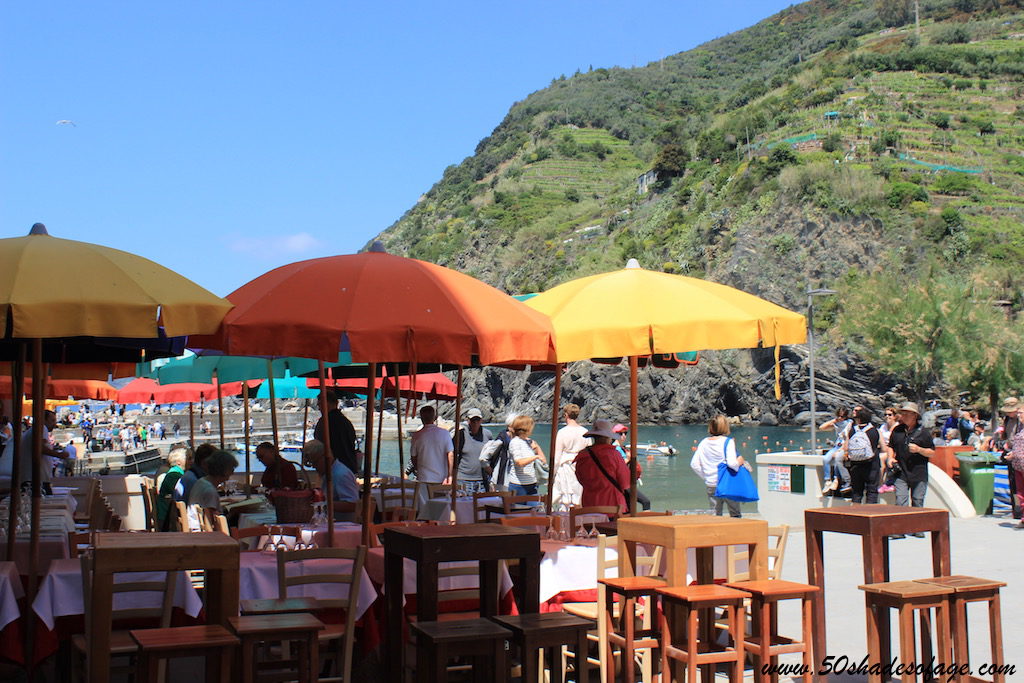 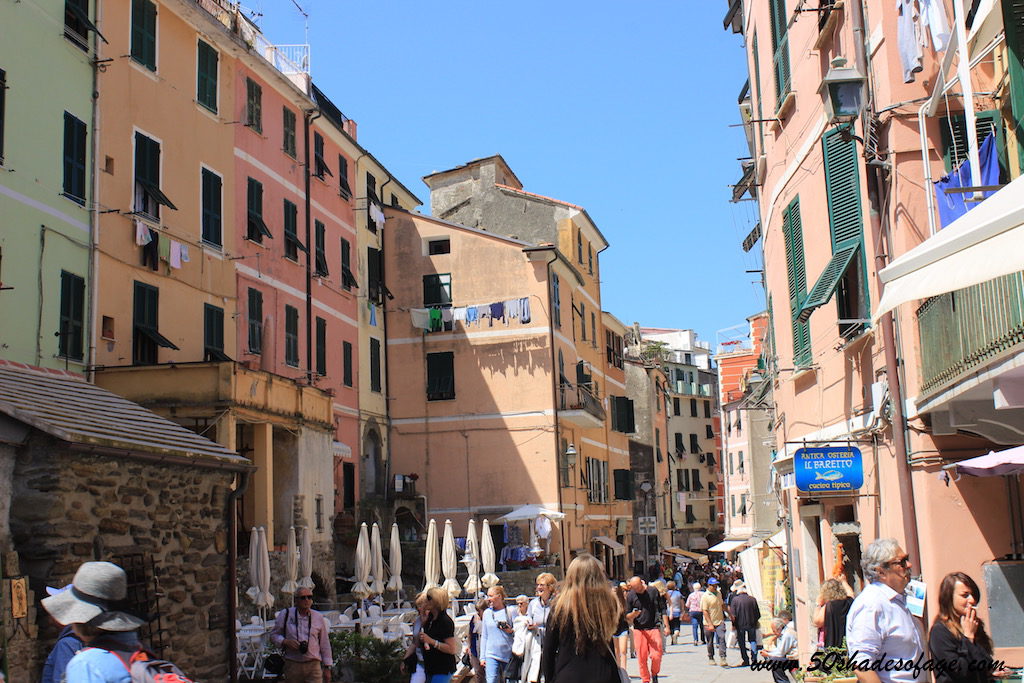 After catching our breath and having a quick bite to eat and drink, we decided to jump aboard the ferry from Vernazza to Manarola. We discovered that the next section of track between Vernazza and Corniglia village was closed due to a landslide, so we didn’t have much choice. 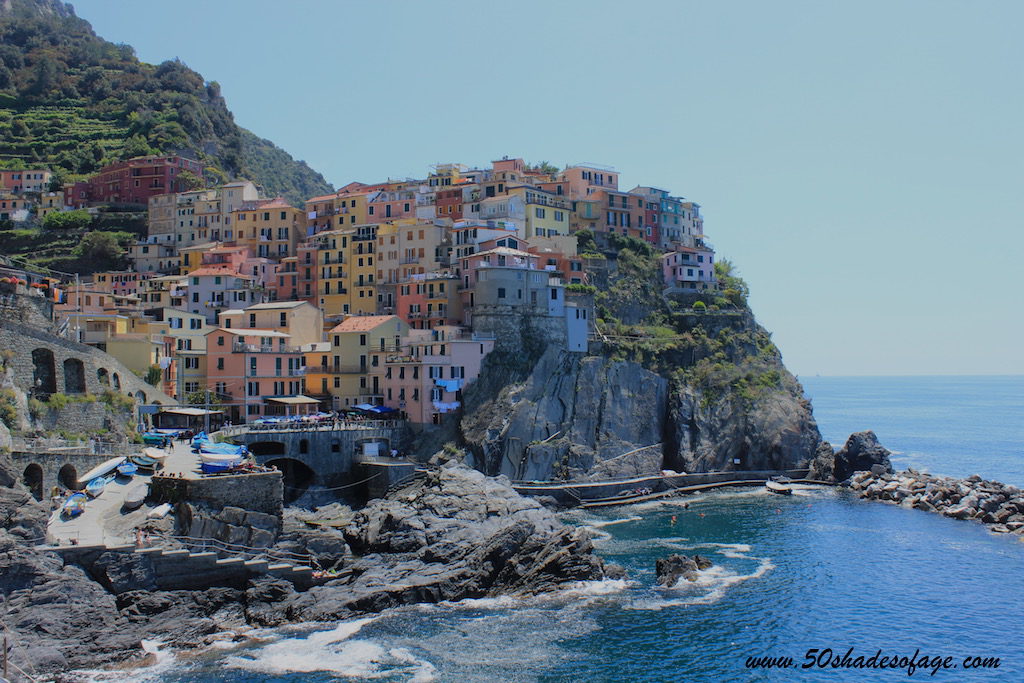 The Village of Manarola

However as it turned out it was the perfect day to be on a boat cruising along the coastline of the Cinque Terre. It was a stunning day and the views from the water were incredible. 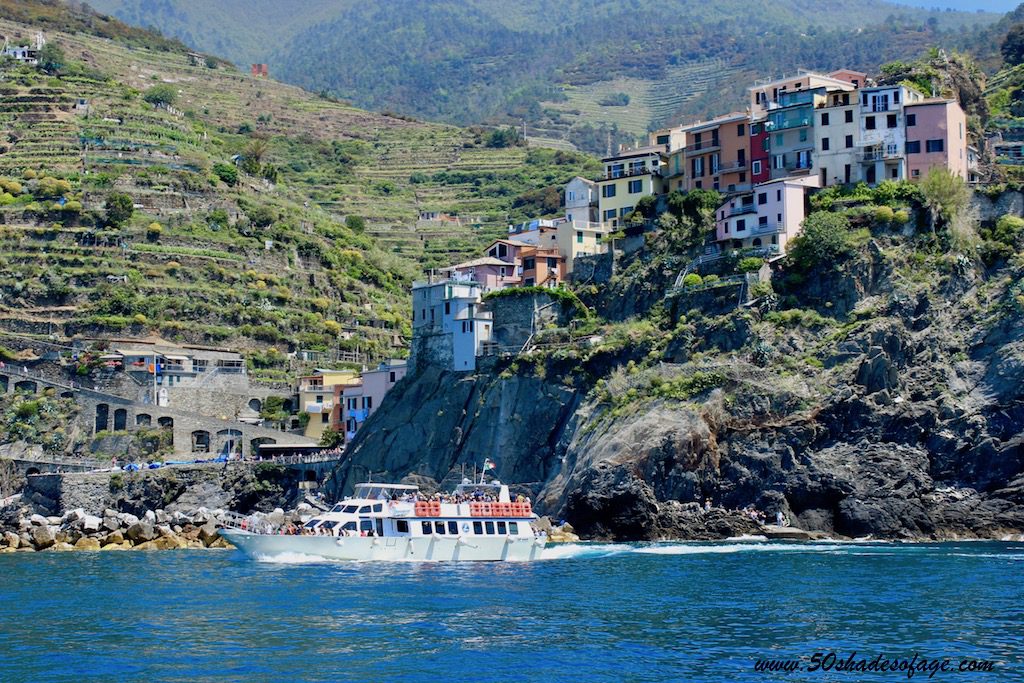 Built high on a high rock 70 metres above sea level, the charming village of Manarola is another spectacular sight approaching it from the sea. The village is very similar in appearance to Vernazza with its colourfully painted buildings and narrow steep laneways. 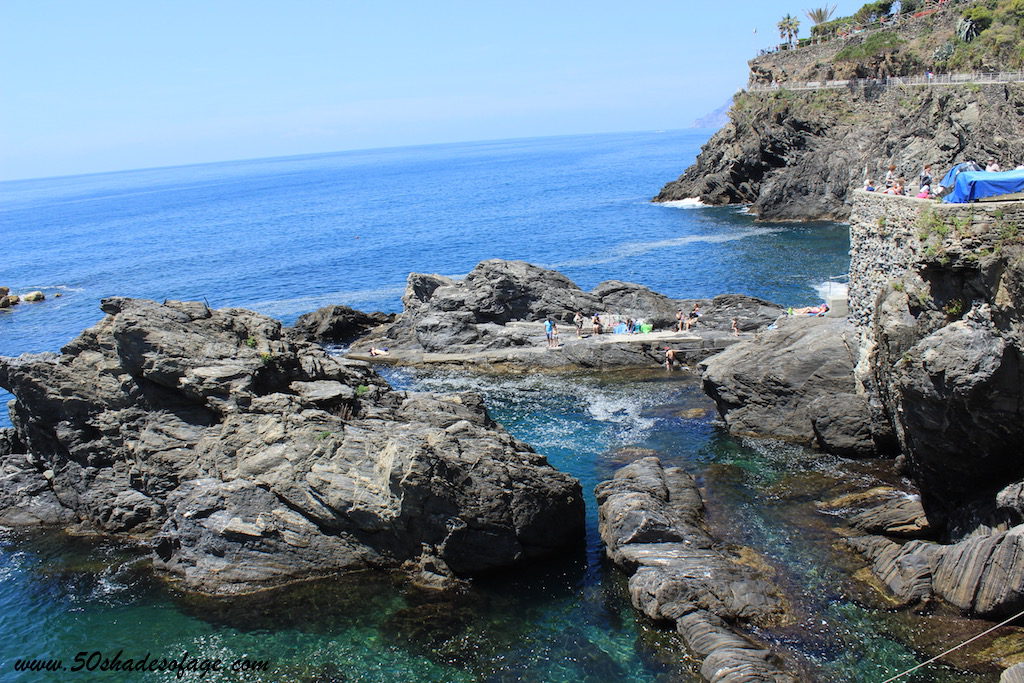 People swimming and sunbaking on the rocks at Manarola

There is no real beach here, but it has some of the best deep-water swimming around, from the rocks that protrude out of the sea. We noticed there were a few sun bathers and swimmers jumping off the rocks into the very inviting deep turquoise waters. 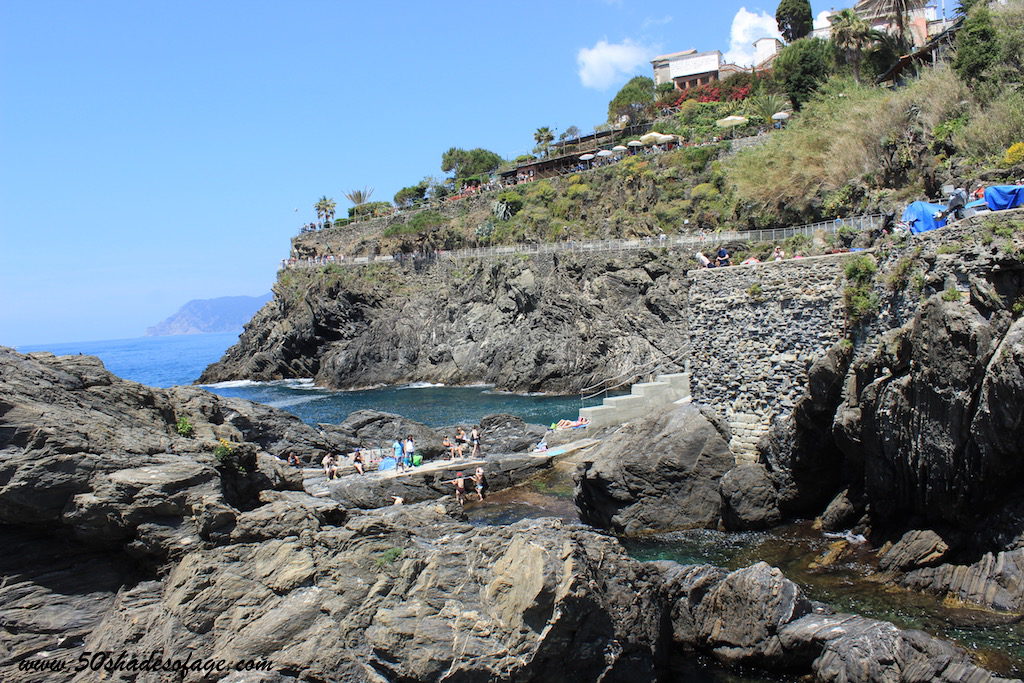 So far we had walked on the trail and caught a ferry along the coastline, so now it was time to catch a train back to Monterosso. We made the decision not to stop at the other village, Riomaggiore, as the day was almost over and we were keen to head back and have a swim on the beach and enjoy a cold beer afterwards at one of the beach bars. 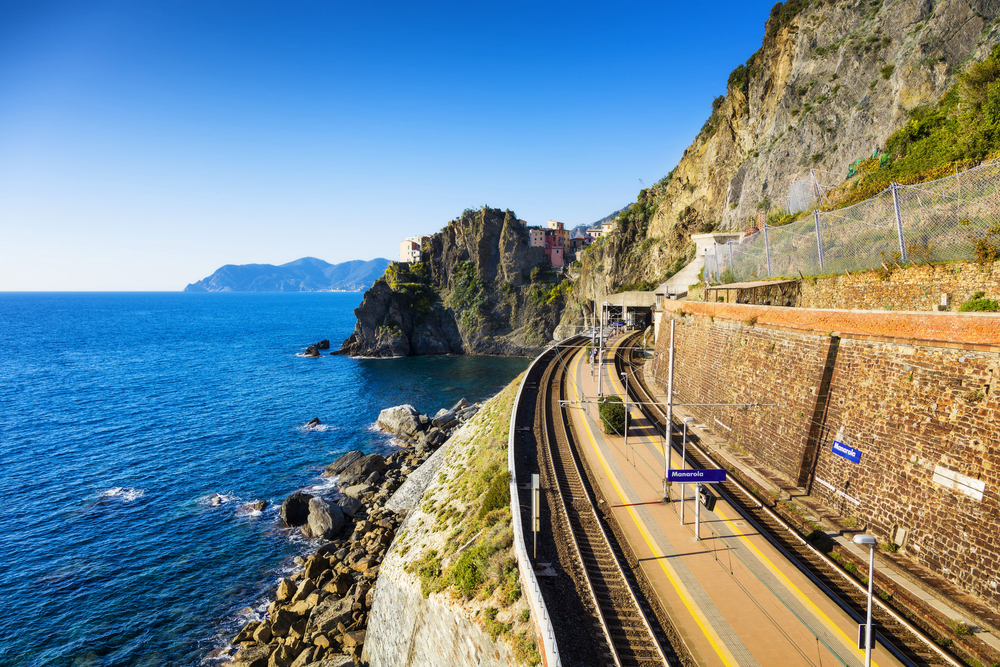 So if walking or cruising isn’t your thing, then the train is a very cheap and easy way to village hop along the Cinque Terre. The trains run every half hour. 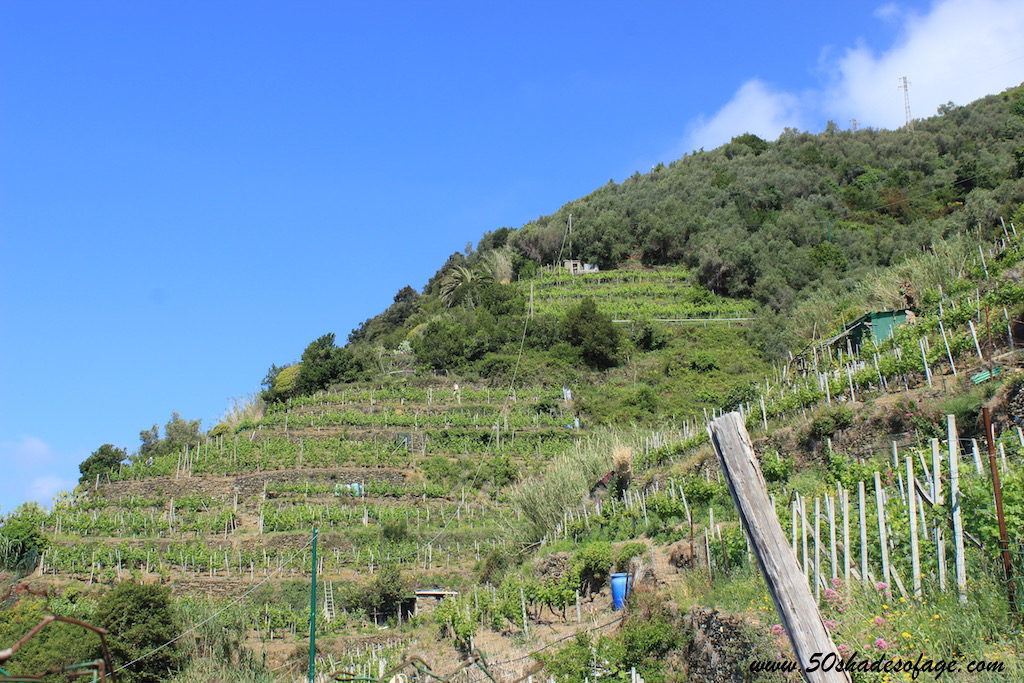 Grapevines on the terraced hills of Cinque Terre

Everywhere you look on the mountainsides of the Cinque Terre, they are heavily terraced and are used to cultivate grapes, olives and lemons. Anchovies of Monterosso are a local specialty. The area is also known for pesto, a sauce made from basil leaves, garlic, salt, olive oil, pine nuts and pecorino cheese. 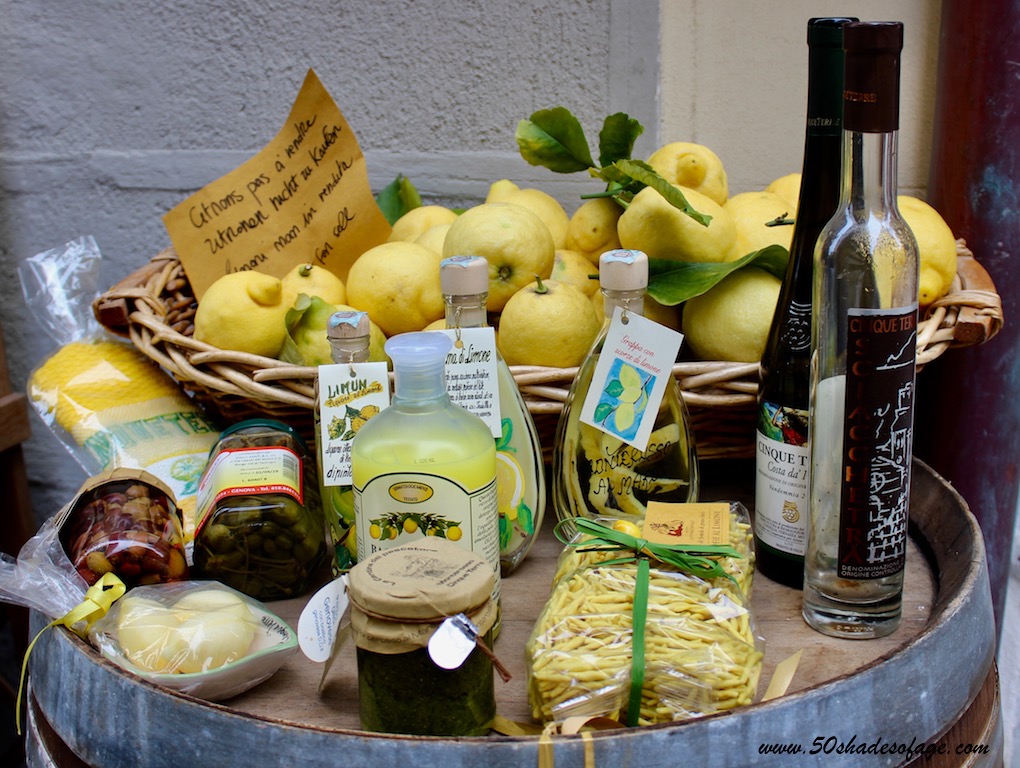 Some of the local produce of Cinque Terre

The Cinque Terre was as I expected – perfectly picturesque, scenic and charming. It was one place in Italy that I was aching to see for myself as its reputation had preceded itself. With such spectacular weather and dramatic scenery Cinque Terre was never going to disappoint.

Spread the love
Cinque TerreItalian HolidayItalyManarolaMonterossoVernazza
By 50 Shades, September 7, 2017 Kathy was a 50 something year old when she started up this blog 6 years ago, but has since turned over another decade and is now in her early 60s. She is married with two adult children and lives on the Tweed Coast of New South Wales, Australia. Kathy enjoys living life to the fullest and loves to keep fit and active by maintaining a healthy diet and exercising regularly. Some of her interests include reading, photography, travelling, cooking and blogging! Kathy works part-time as a freelance writer but her real passion is travelling and photographing brilliant destinations both within Australia and overseas and writing about it.