Tracing The Murray River from Yarrawonga to Echuca 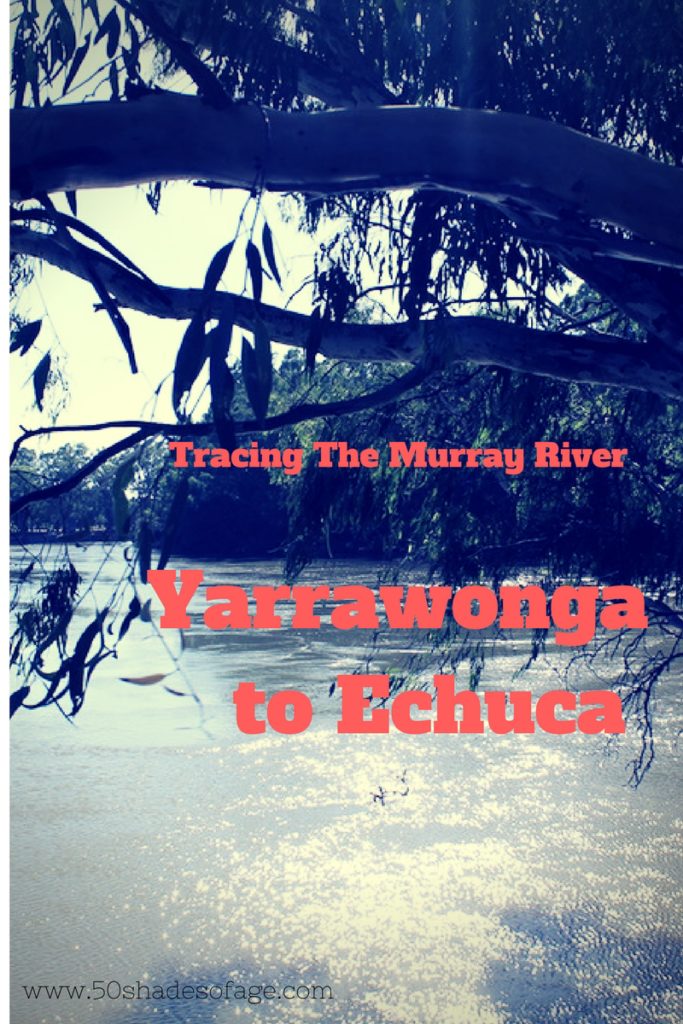 Departing Yarrawonga/Mulwala we drove along the Murray Valley Highway to Cobram/Barooga. These twin towns separated by the Murray are a golfer’s or bowler’s paradise with two 18 hole golf course and  bowls rinks.

Thompsons Beach at Cobram is a beautiful sandy beach that stretches around a river bend just downstream of the Cobram-Barooga bridge. This spot is extremely popular with families with excellent facilities in the adjoining park, including a cafe, toilets and BBQs. You will also find the loading dock for the Paddlesteamer ‘Cobba’ here. 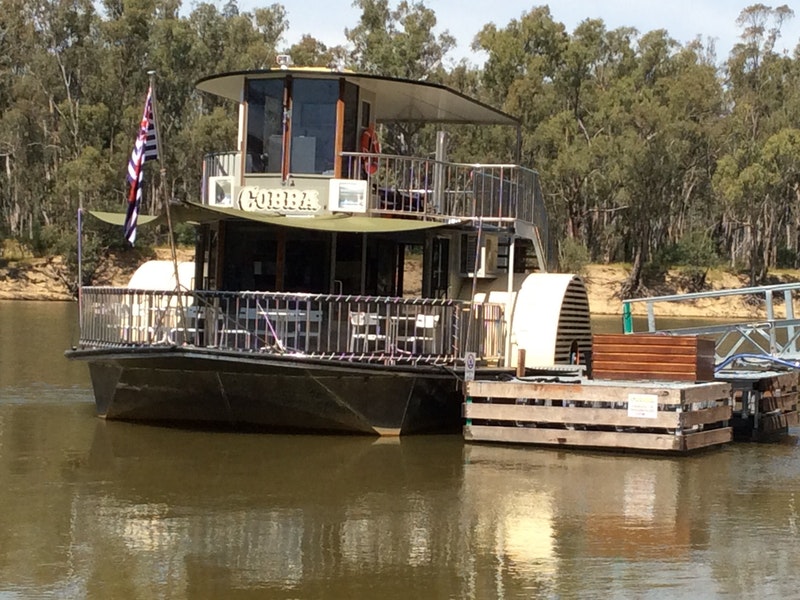 The Cobba Paddlesteam in Cobram

Quinn Island Wetlands Sanctuary at Cobram is an island formed by a bend in the Murray River and a small anabranch called Scotts Creek. The island is covered in river red gums and silver wattle trees with a billabong that is a haven for water birds. 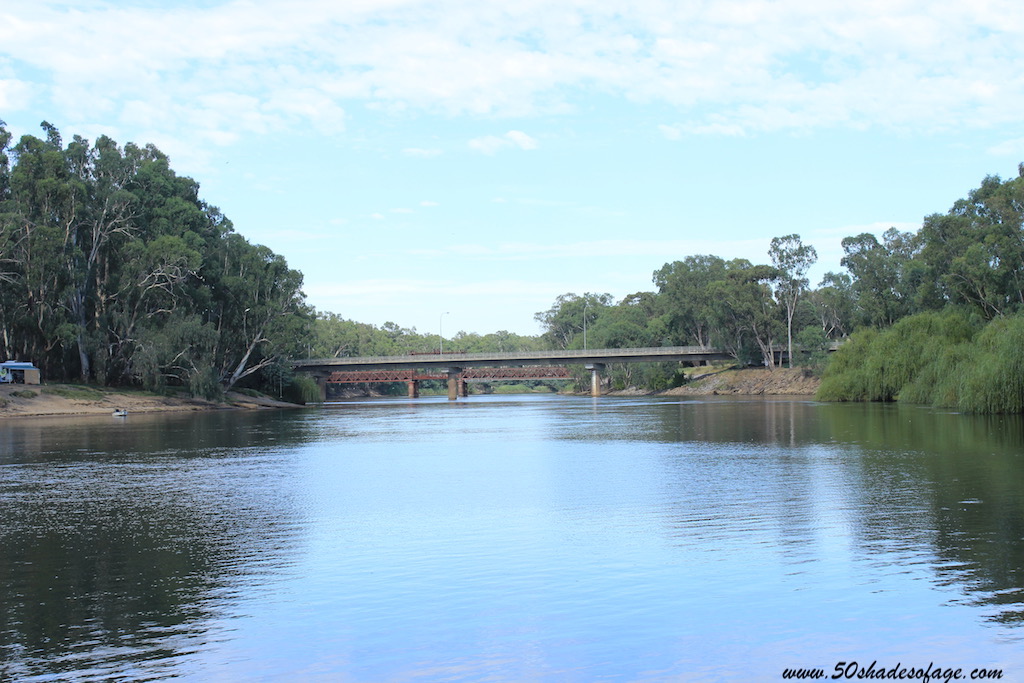 The Murray River at Tocumwal

Affectionately called “Toc” by the locals, Tocumwal’s main street is situated right along the Murray River. This pretty as a picture town has excellent facilities, including some chic boutiques, antique shops, trendy cafes and for the sports lovers there are two golf courses, bowls, fishing and boating on the river.

There is a lovely walk in Tocumwal from the Golf Club along the WAAF creek walk that follows a creek and is shaded by tall eucalytpus and weeping wattle trees. 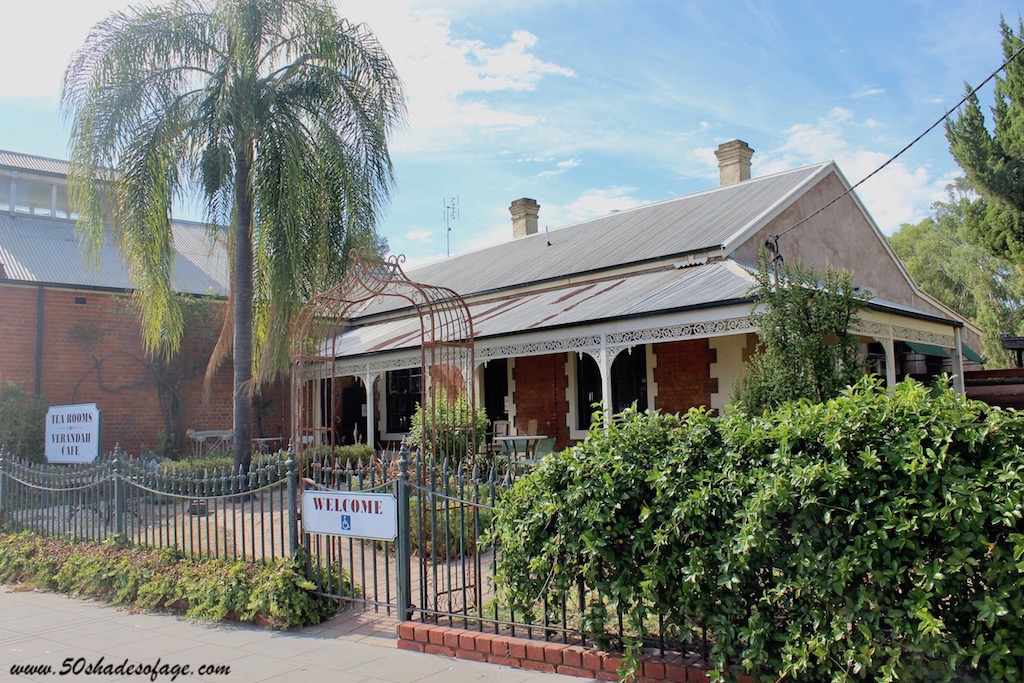 One of the gorgeous cafe/gift shops in Tocumwal

Chrysties Museum, set upon 4 acres, is a great place to see a lifetime collection of logging trucks, vintage cars and farming equipment.

Camping at Tocumwal
– Town Beach
– Pumps Beach Sonnerams Reserve
Water skiing and camping go hand in hand along the Murray River so there are plenty of places to launch your speedboat along the river. Otherwise launch a kayak and paddle peacefully down the river. 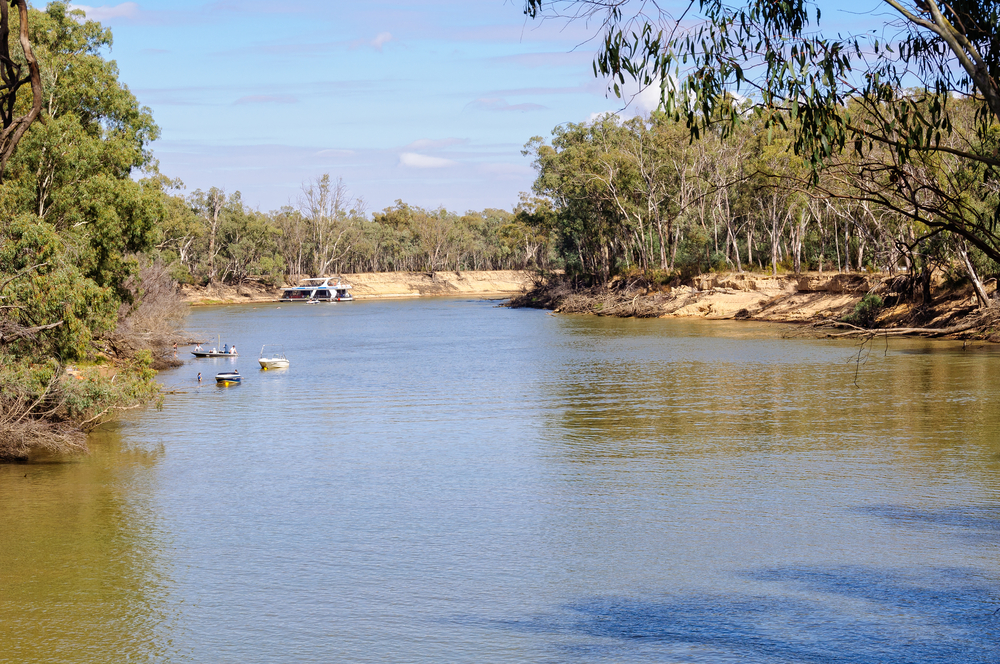 The sandy banks along the Murray at Barmah

After we left Tocumwal we travelled south for a while, leaving the Murray River, through some interesting territory and some towns with even more interesting names, like Koonoomoo, Yarroweah and Strathmerton, until we reached Nathalia. If you take a right hand turn here you can drive to the Barmah National Park on the Murray.

As a child I spent many family holidays camped at Barmah on a sandbar on the river and although my memories are a little faded, I remember this as being a fantastic place to camp. Because we had our dog onboard this prevented us from visiting this huge protected National Park and Forest. 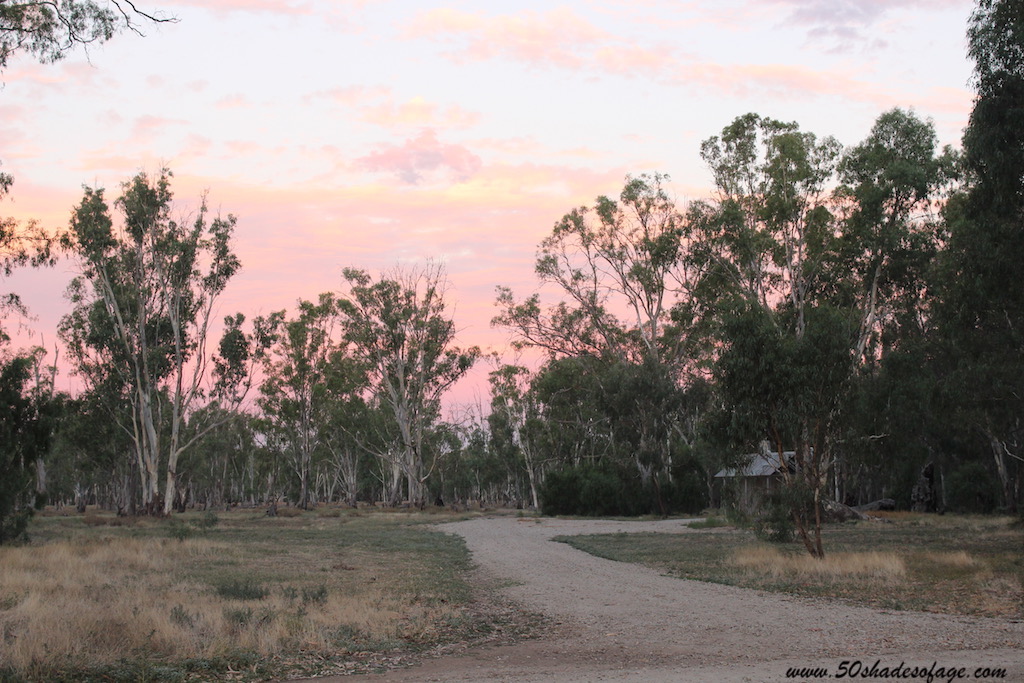 Sunset amongst the River Red Gums

There are over 260 species of birdlife in the National Park wetlands area and there are plenty of options to see them by either canoeing, bushwalking or boating along the river. There are also lots of great tracks suitable for 4WDs. This is bush camping at it’s very best. You can choose your own bush-camping site for 112 kms beside the Murray among the towering red gums here.

Possibly the piece de resistance in this region, are the twin towns of Echuca and Moama. Echuca was Australia’s largest inland port in the 1870s and has a rich cultural heritage and is known as the paddlesteamer capital of Australia. 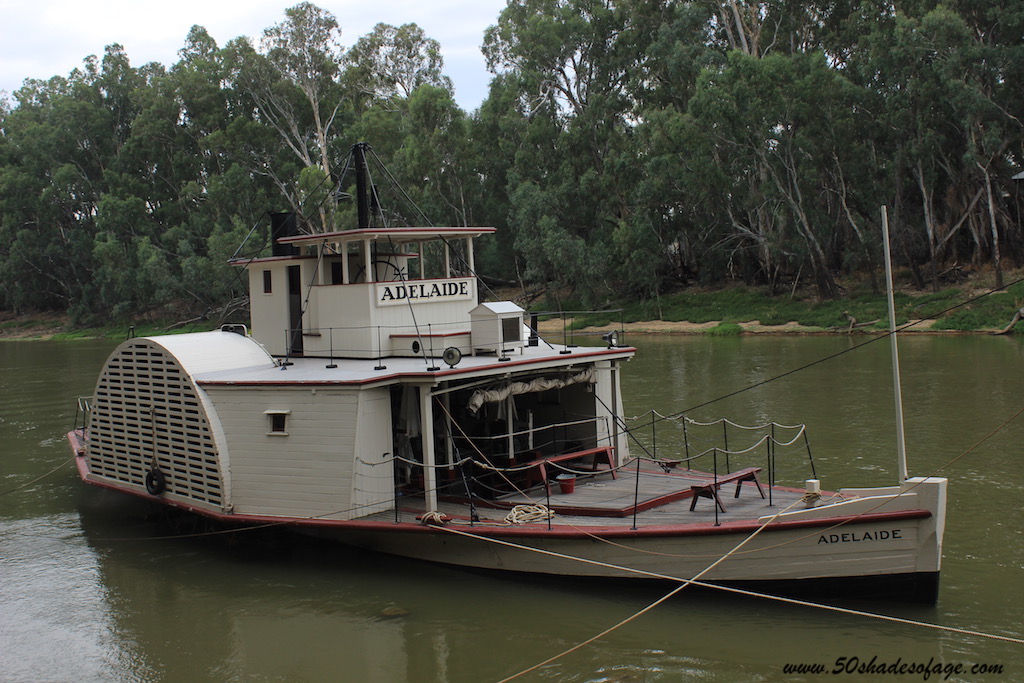 Paddlesteamer Adelaide on the Murray River at Echuca

We spent a good half day on a hot and sultry day exploring the Port of Echuca, with a re-created port village, restored wharf and the fabulous Echuca Discovery Centre. From the new red gum walkways we watched old nostalgic paddlesteamers departing the wharf, cruising down the Murray. We learnt that one paddlesteamer, the PS Pevensey, was the one used in the TV series “All The Rivers Run”. 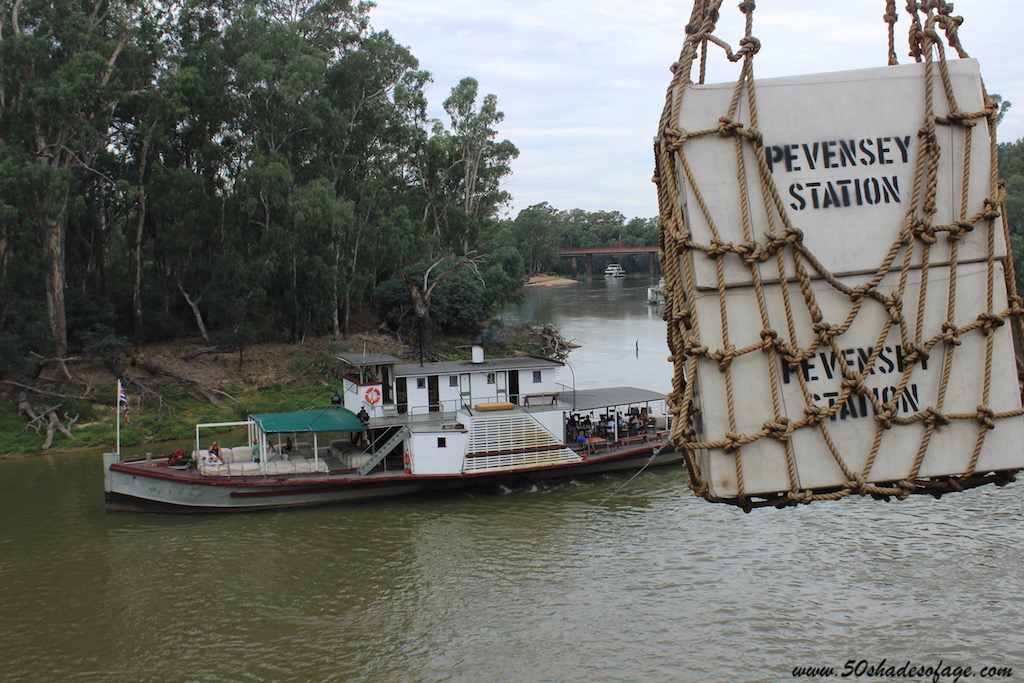 Paddlesteamer Pevensey at the Port of Echuca

After we had finished exploring the port, we sauntered into the adjoining park and the historic Henry’s Bridge Hotel, built by pioneer and ex-convict Henry Hopwood. We ended up strolling along the main thoroughfare of High Street through the town with plenty of interesting old buildings, shops and cafes. 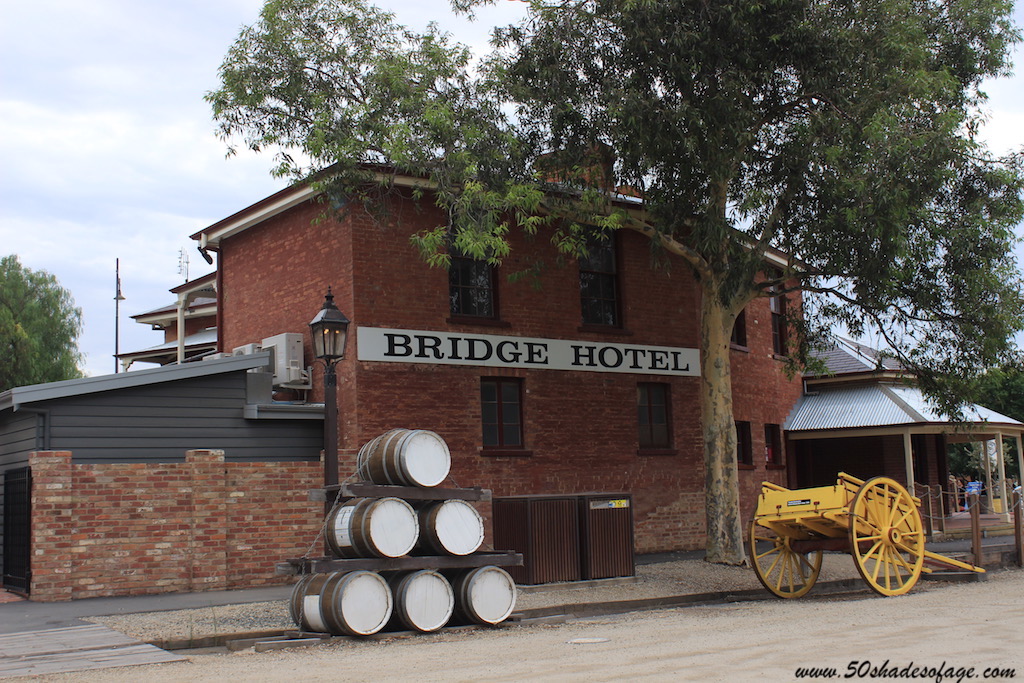 The Bridge Hotel in Echuca

The other must dos and sees in Echuca, are a cruise on a gracious, historic paddlesteamer, or visit some true Aussie icons at the National Holden Motor Museum and the Great Aussie Beer Shed.

We had arrived in Echuca amidst the excitement of one of Echuca’s iconic annual events – the Southern 80, the biggest ski race in the world. Opposite our caravan park at Moama the speedboats and the skiers were gathered pre-race day in a festival-type atmosphere. As we soon learnt, boating and skiing is extremely popular along the Murray River between Echuca and Torrumbarry. 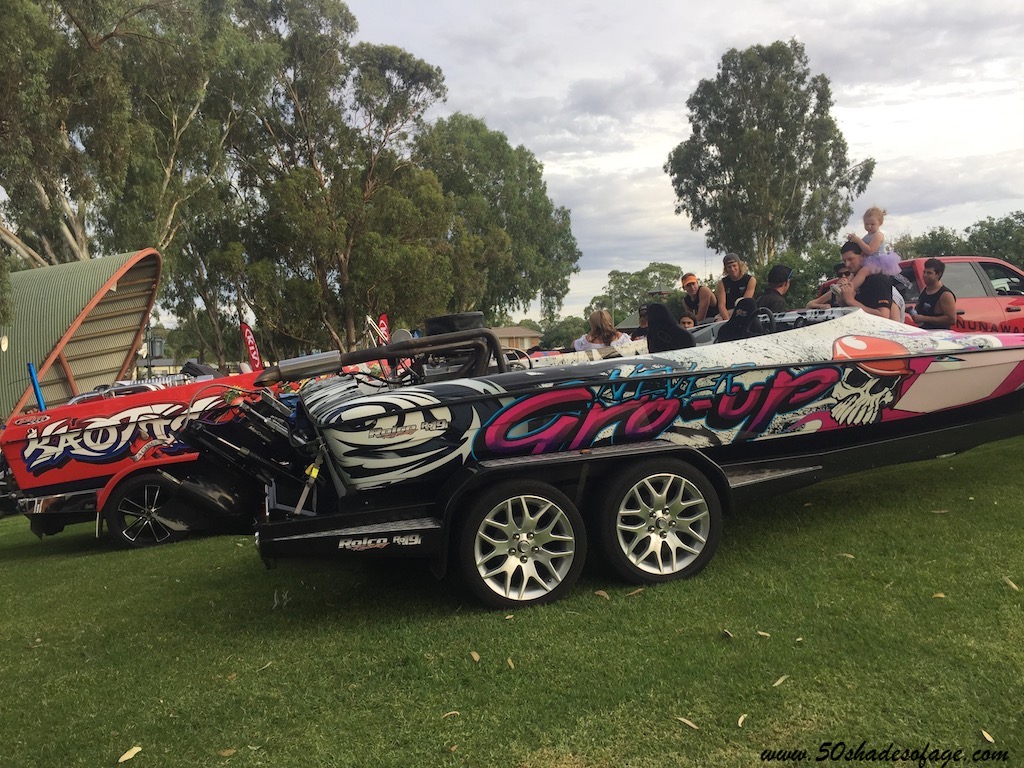 Camping in Echuca/Moama
We stayed at Moama Riverside Park near the bridge that separates Echuca and Moama, however there are plenty of other caravan parks in town. There are bush camping areas at:
– Christies Beach, Echuca
– Wills Bend, Echuca
– Echuca State Forest 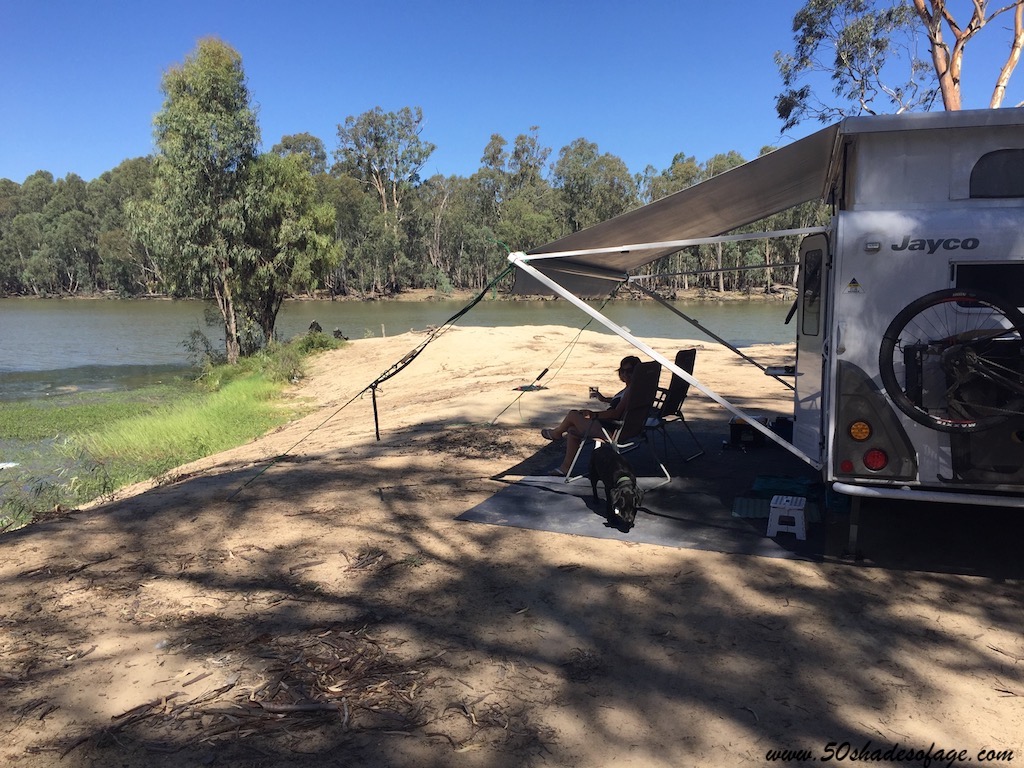 After a day in Echuca we headed west towards the small farming town of Torrumbarry. This place was of particular interest to me because I spent a few years as a child on a dairy farm here alongside the Murray River. It was a great opportunity to take a trip down memory lane and visit a childhood friend who still lives here. 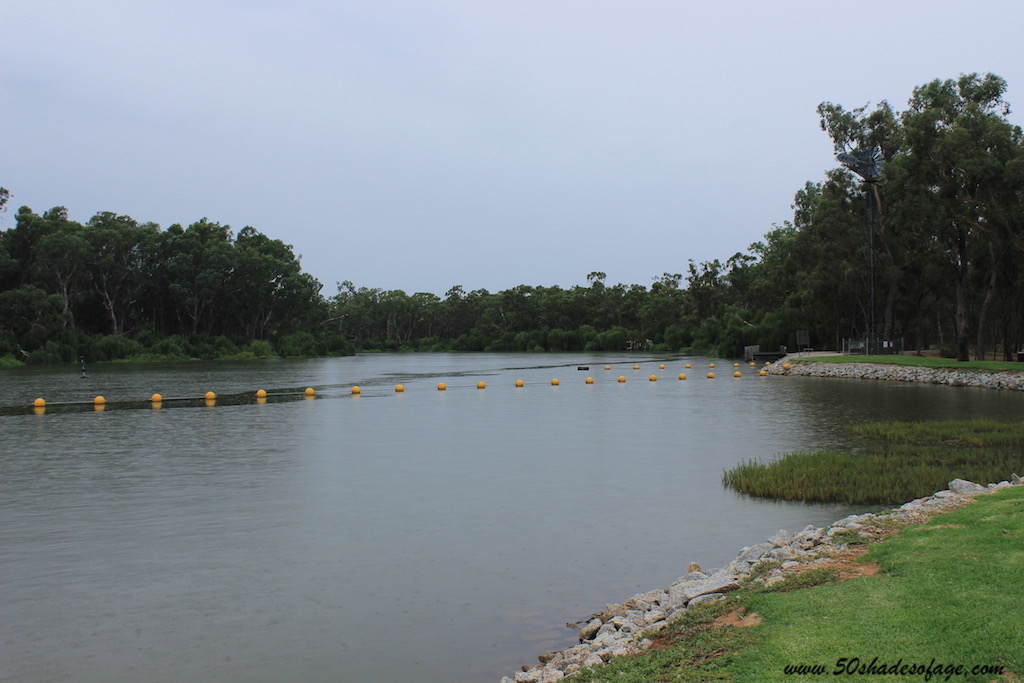 Torrumbarry is is home to one of the largest weir structures in Australia and has magnificent wetlands from Torrumbarry to Gunbower. There is a camping area available at Torrumbarry Weir.

As expected, the Murray was as mighty as I had remembered it in my youth. I got a thrill out of re-visiting some of the camping spots that I spent a bit of time at when I was a child. I had almost forgotten how wonderful the towns are that line the Murray and how it’s the lifeblood of the region.

Spread the love
CobramDiscover Murray RiverEchucaMurray RiverTocumwal
By 50 Shades, March 7, 2018 Kathy was a 50 something year old when she started up this blog 6 years ago, but has since turned over another decade and is now in her early 60s. She is married with two adult children and lives on the Tweed Coast of New South Wales, Australia. Kathy enjoys living life to the fullest and loves to keep fit and active by maintaining a healthy diet and exercising regularly. Some of her interests include reading, photography, travelling, cooking and blogging! Kathy works part-time as a freelance writer but her real passion is travelling and photographing brilliant destinations both within Australia and overseas and writing about it.