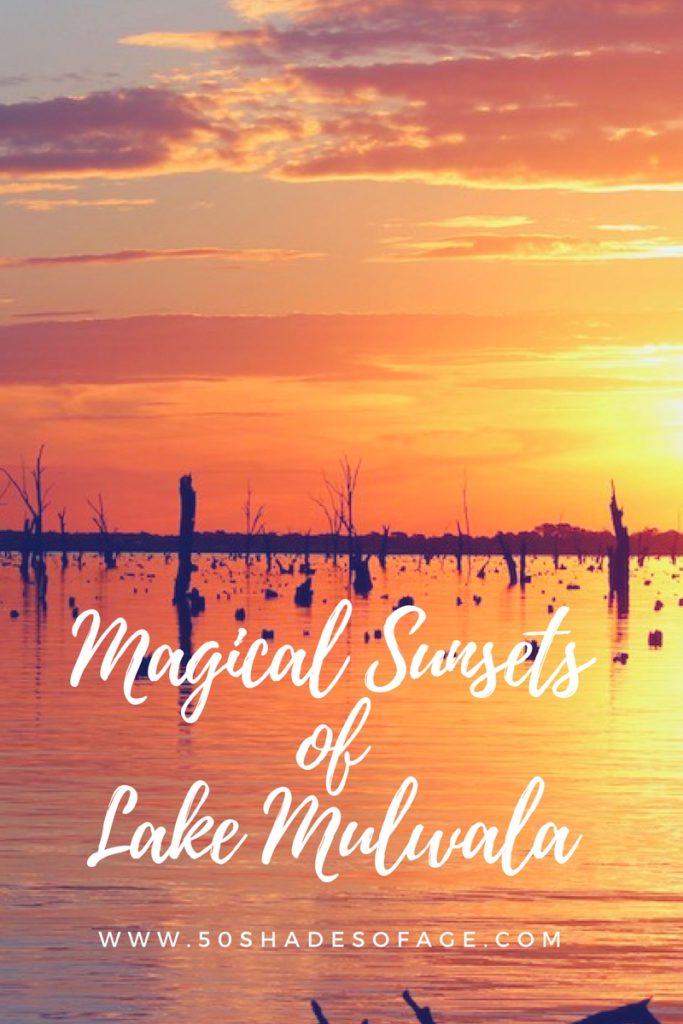 We had been travelling in our caravan making our way down to where the Murray River unofficially begins at Albury/Wodonga for 11 days. Once we reached Albury we stopped here to re-stock provisions, and then decided to keep driving until we ended up at Lake Mulwala at Yarrawonga. We were in for a treat, firstly because the weather was extremely hot and the lake provided a good place to swim and cool off, and secondly for the magical sunsets of Lake Mulwala.

Lake Mulwala was in fact a man-made lake due to the construction of the Yarrawonga Weir in 1939 and separates the towns of Mulwala, on the New South Wales side and Yarrawonga on the Victorian side of the Murray River. The lake is full of ghostly river red gums, abundant birdlife and freshwater fish and crayfish. 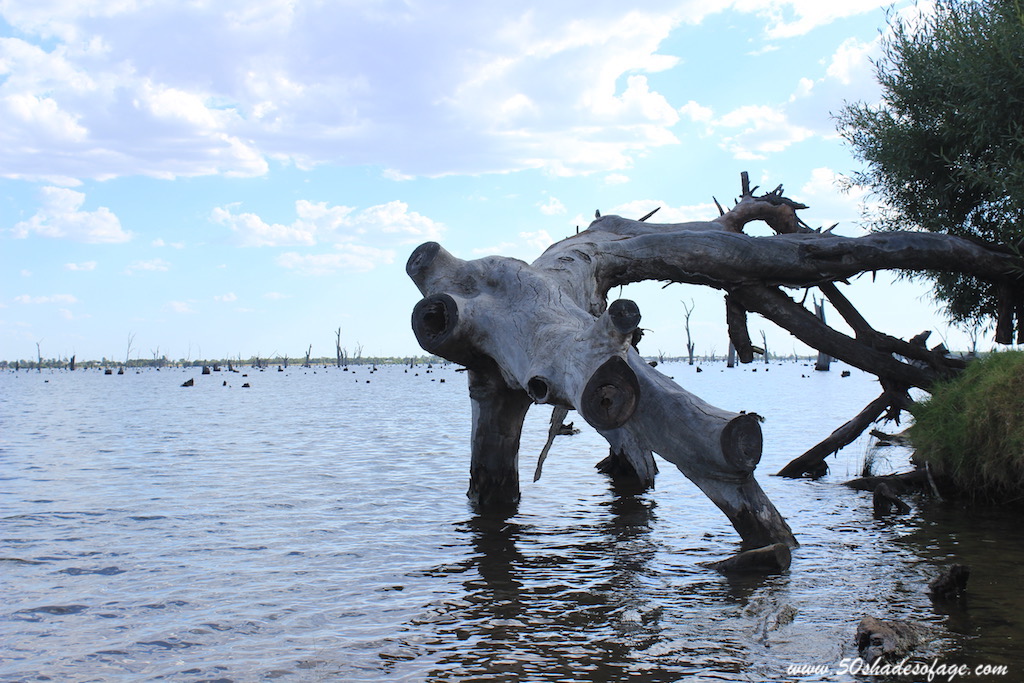 We did our research and decided to free camp at Kyffins Reserve, on the Mulwala side, that hugs the shoreline of the lake for approximately 1 kilometre. We chose a well-shaded and grassy area right on the banks of the lake near a boat ramp. As there are no facilities to speak of at Kyffins Reserve we had to rely on battery power and gas. We also erected our own porta-loo enclosed in a cubicle and set up a bush shower that required no heating as the temperature was around 40 degrees! 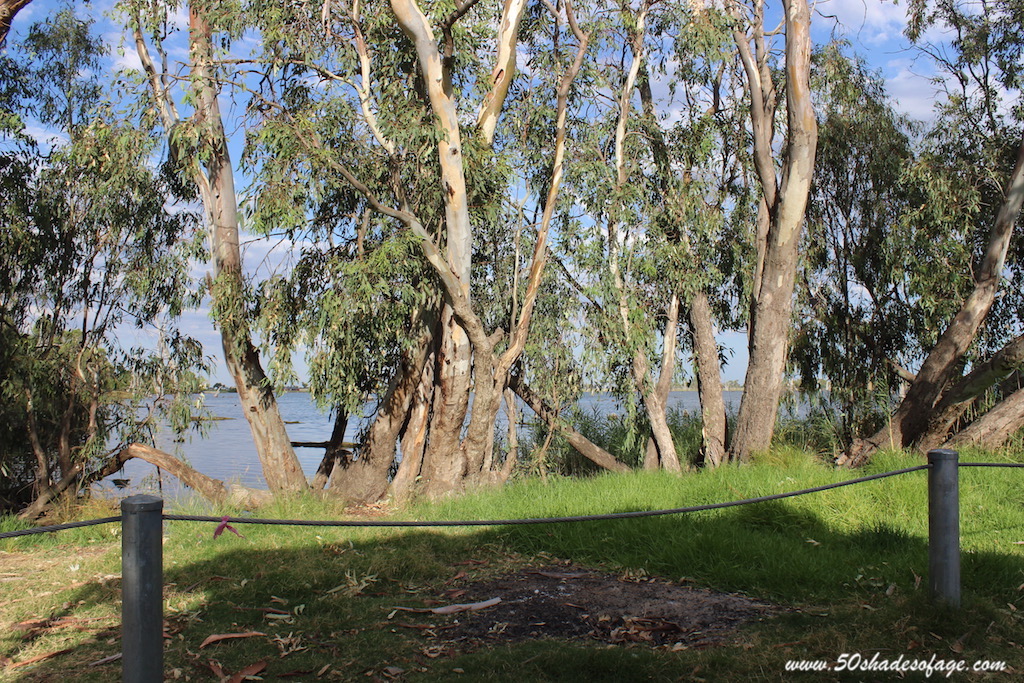 Our campsite on the banks on Lake Mulwala

Lake Mulwala is renowned as a great fishing spot and we observed many tinnies fishing the lake during our stay, particularly in the late afternoons. Fish species found in the area include Murray Cod, Trout Cod, Golden Perch (Yellow Belly), Silver Perch, and Murray Crayfish. 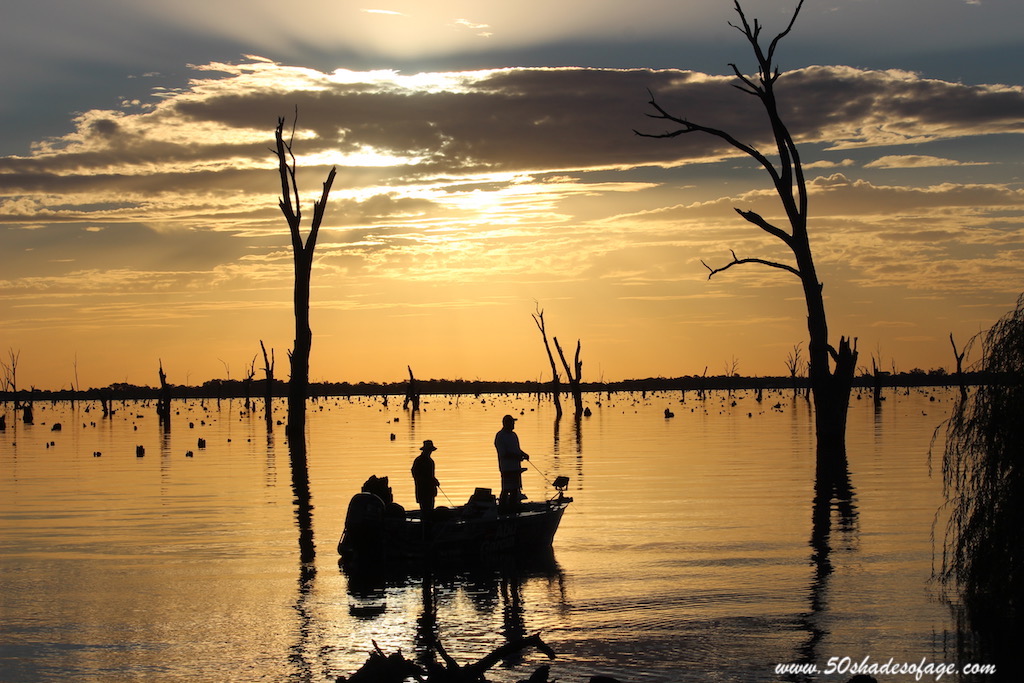 Fishing boat at sunset on the lake

The lake is used for water skiing, but not near where we were camped as there were too many trees jutting out of the water. Kayaking between the ghost gums and sailing is also popular.

If you’re into twitching, then Lake Mulwala is a bird watcher’s paradise! I could sit for hours and watch the waterbirds on the lake. There were a pair of elegant Black Swans nearby our campsite that did absolutely everything together in unison which fascinated me. There were also thousands of extremely raucous White Cockatoos that awoke us each morning at the crack of dawn! 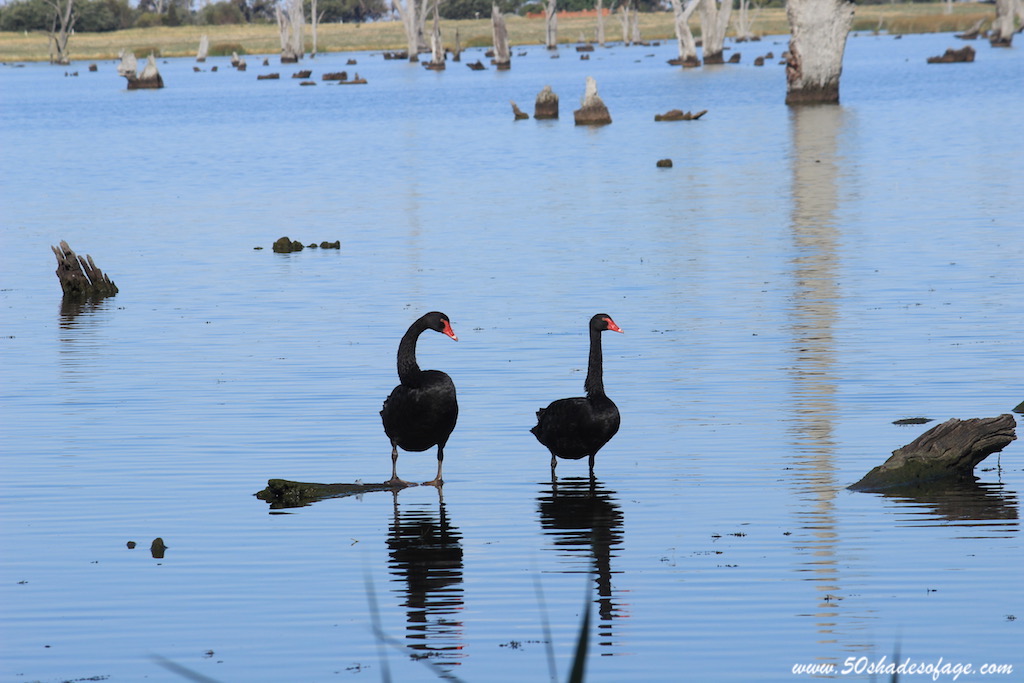 A pair of Black Swans on the lake

Other birdlife you will see on the lake include Pelicans, Ducks, Heron, Ibis, Cormorants, Swamp Hens and Kingfishers. 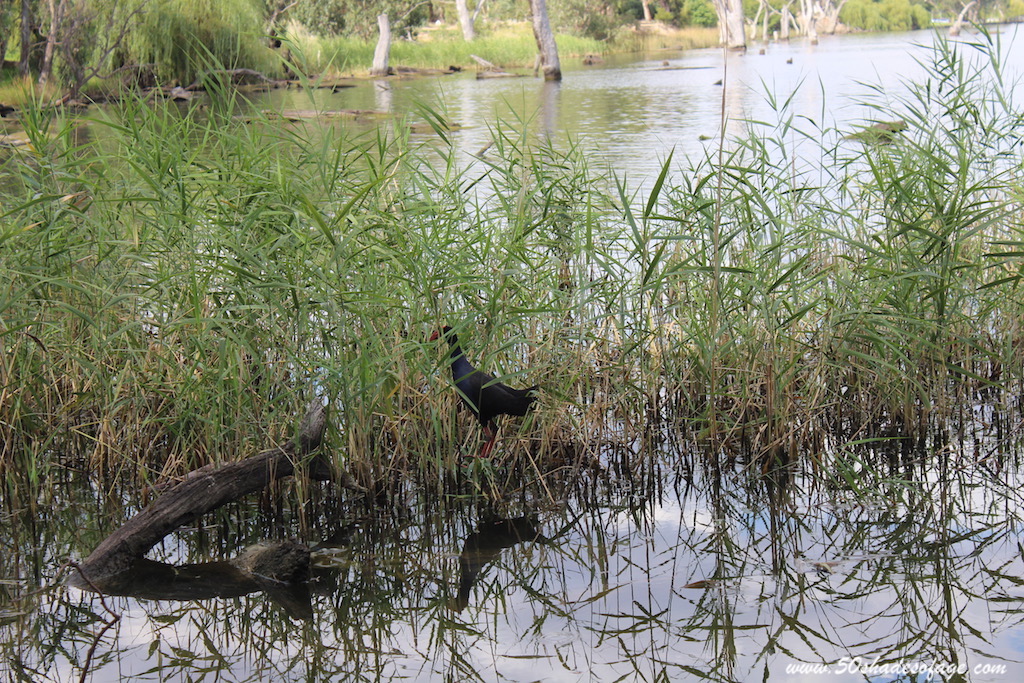 A Swamphen in the reeds

We made a point of strategically locating ourselves where we could watch the sun setting to the west over the lake as we had heard the sunsets were breathtaking. We weren’t disappointed! I’m sure you will agree that the sunsets are scintillating. 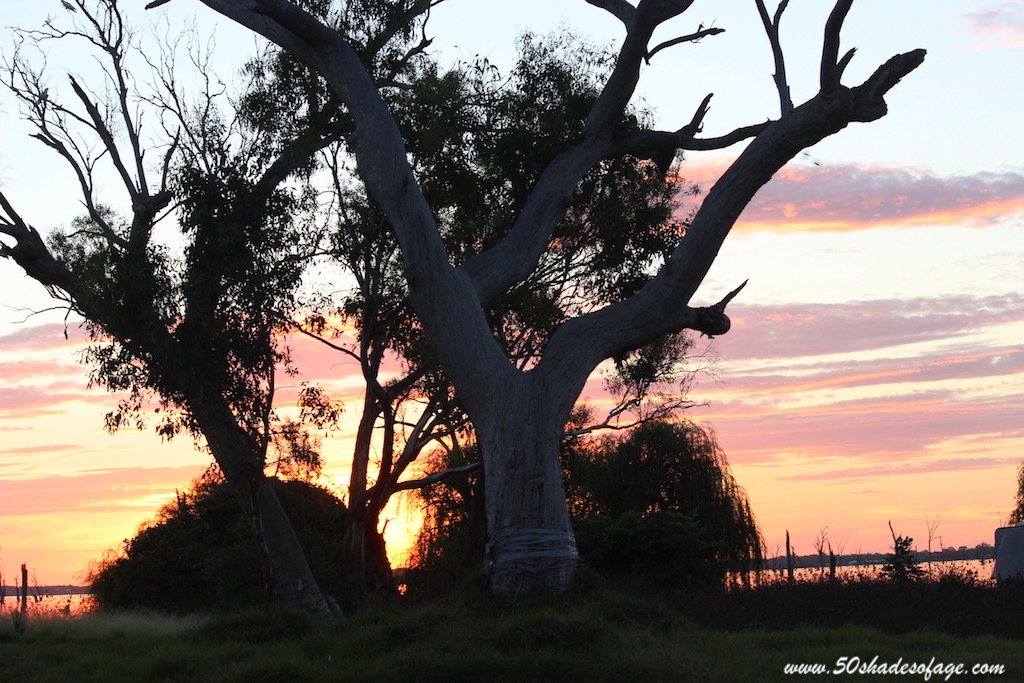 Colour between the trees on the shores of Lake Mulwala 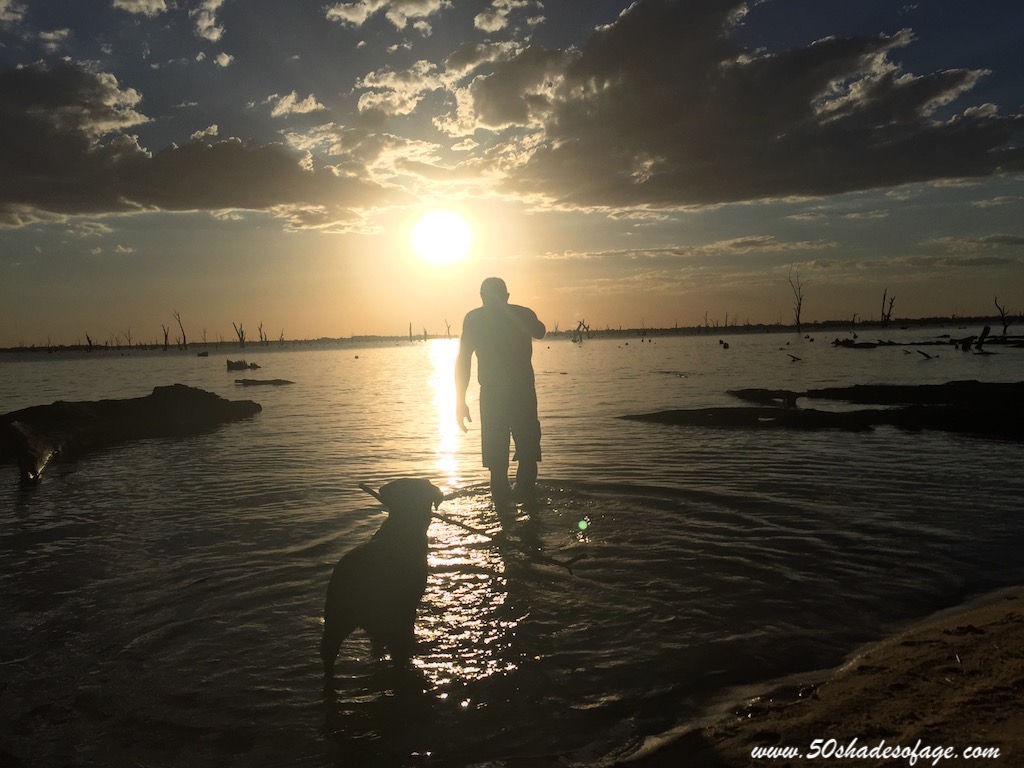 Last swim in the lake before sunset 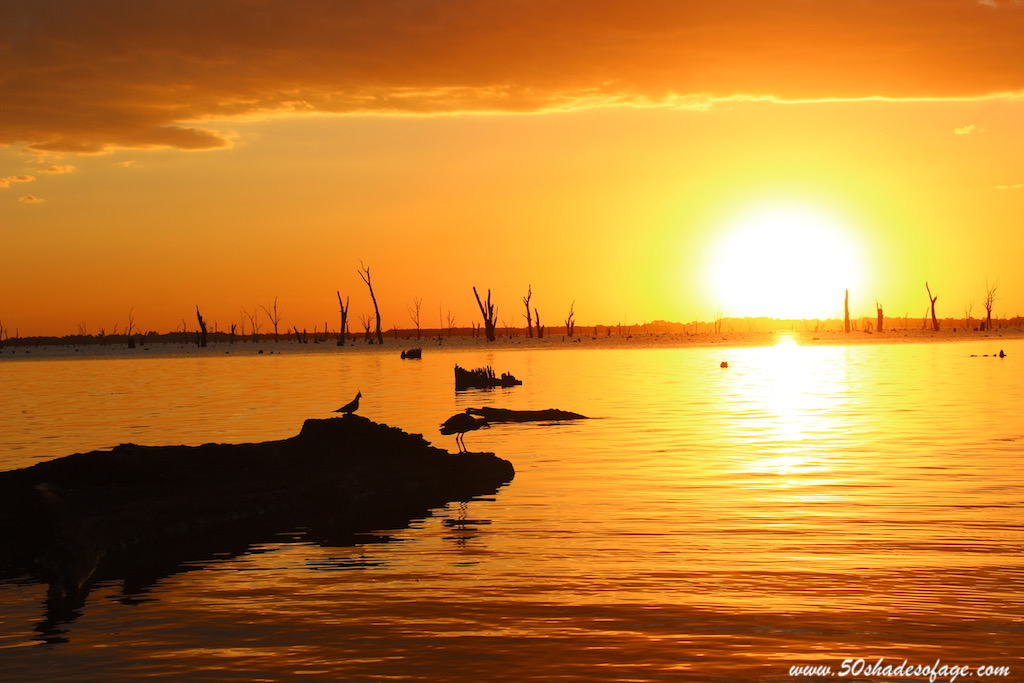 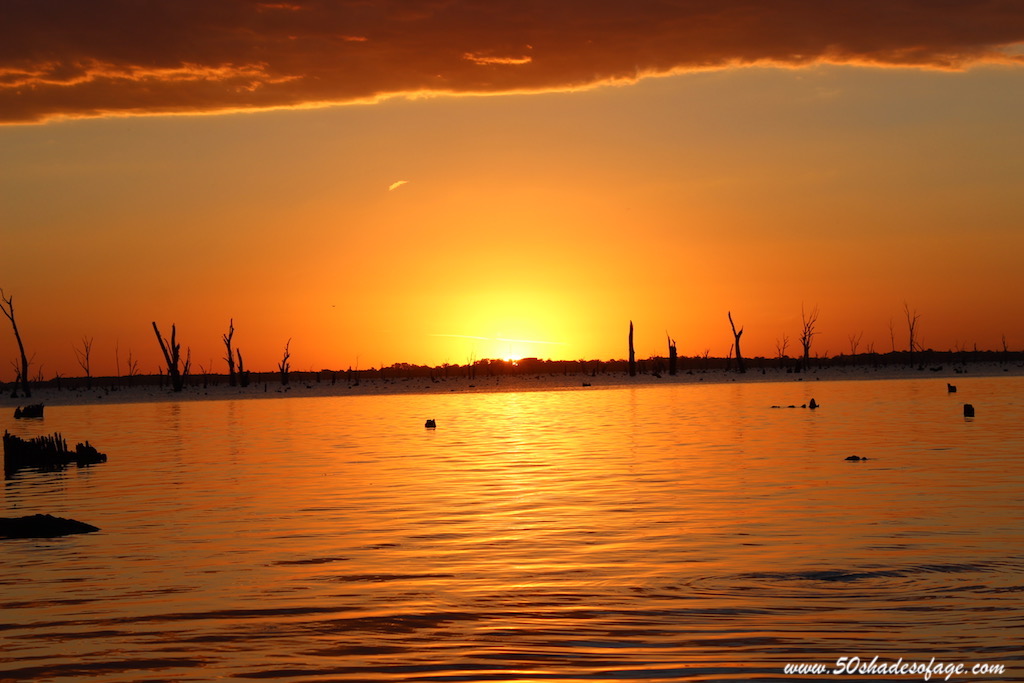 A semi-circle left of the sun 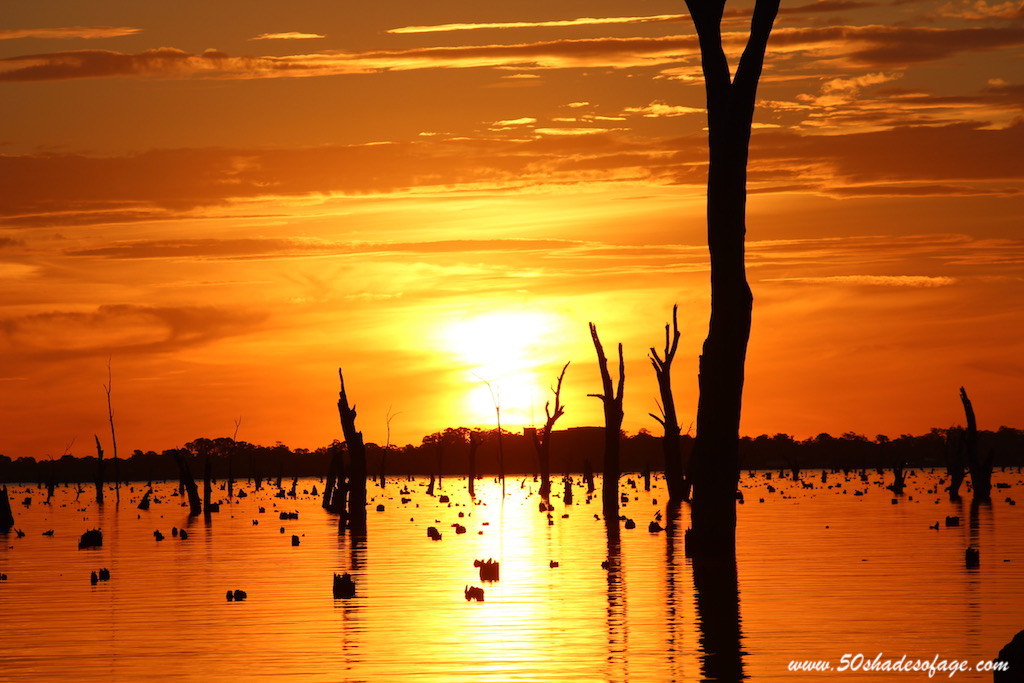 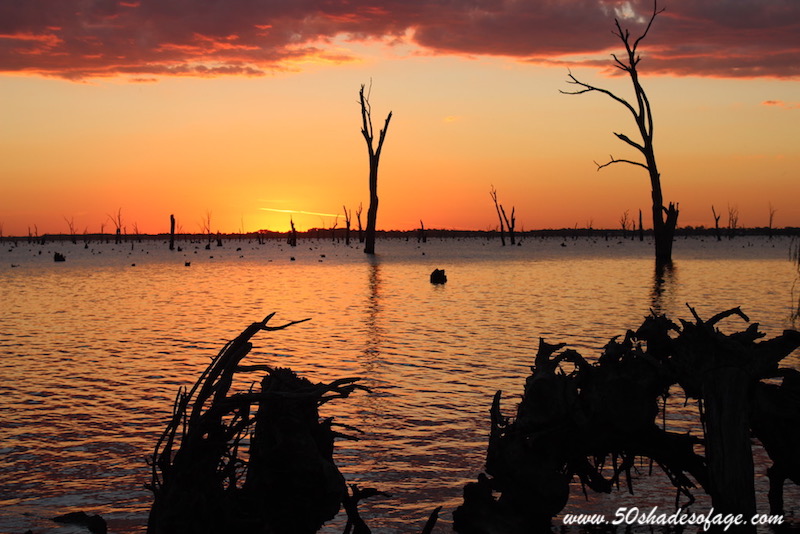 The sun has almost gone 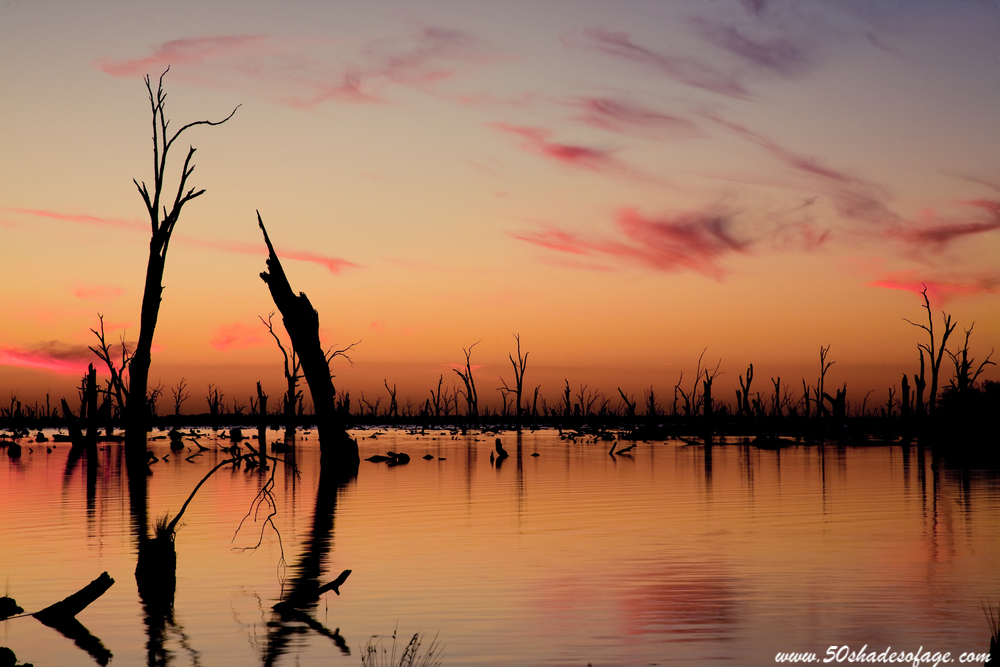 After the sun has gone completely 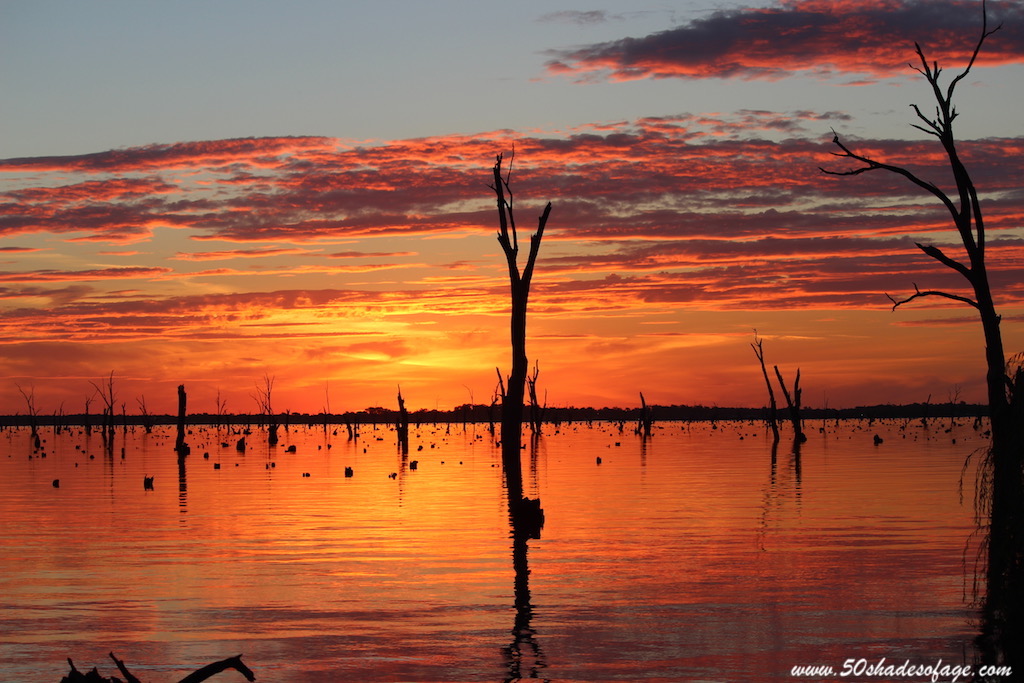 More colour after the sun has gone

So you can fully understand why a few days camped at this lake is worth it’s weight in gold. I don’t think I’ve ever photographed such spectacular sunsets, except maybe for Cable Beach in Broome.

Tip: If you want to capture these sunsets make sure that the lakefront is to the west of you so that you get the reflections of the sun on the lake.

On the southern side of Lake Mulwala is the town of Yarrawonga, a renowned holiday destination, well regarded for its warm and stable climate. For Golfers the towns boasts the largest public access 45 hole golf course in the Southern Hemisphere. In addition is the new 18 hole Links course. With its location on the Murray River and Lake Mulwala it’s popular for water skiing, boating, fishing and camping all year round. 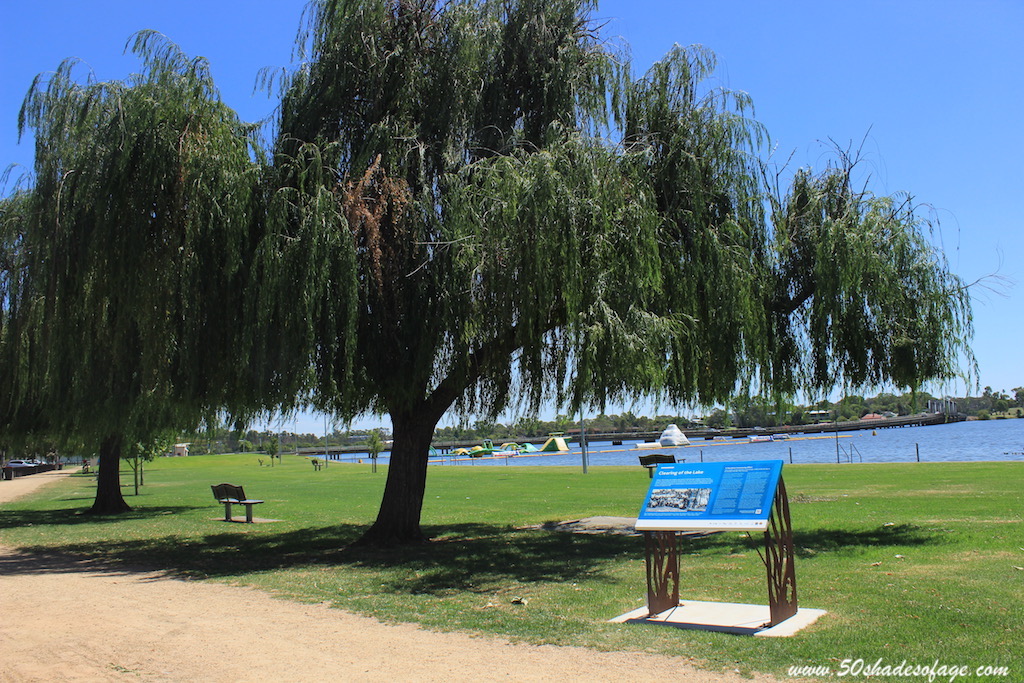 The Murray River at Yarrawonga

Check out the fascinating Yarrawonga Weir, where you learn about how Lake Mulwala was created. You can also jump aboard the old renovated paddlesteamer “P.S. Cumberoona” for a lunch or dinner cruise on the captivating Lake Mulwala and Murray River. 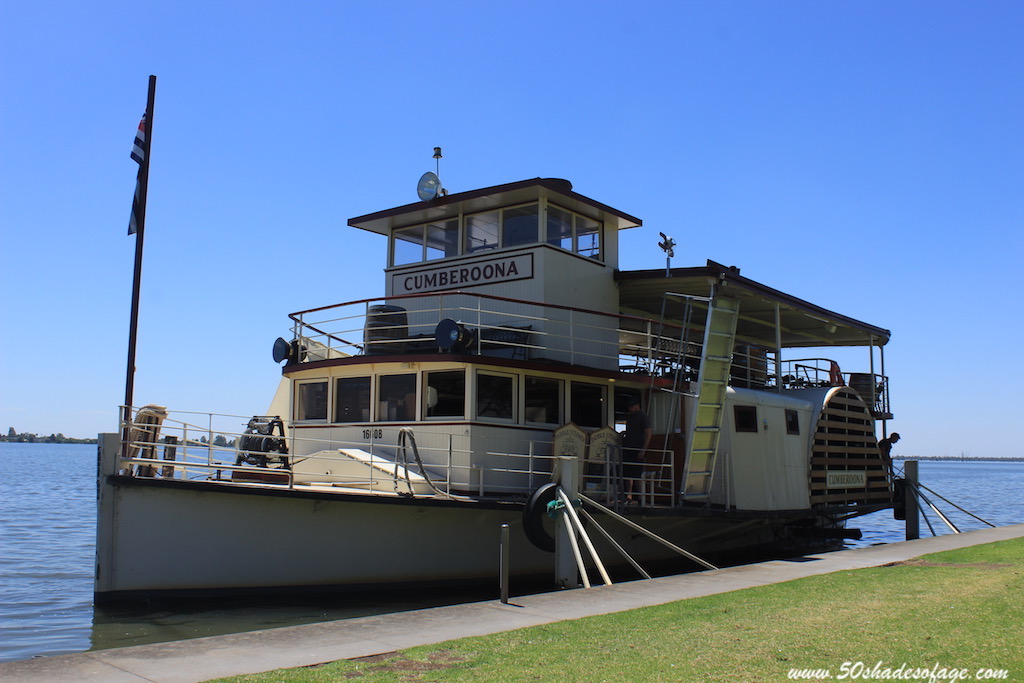 It goes without saying, from a photographer’s point of view, that Lake Mulwala was an absolute dream to photograph. The vistas of the lake are incredible and it was a thrill to perch myself lakeside to capture the beauty of this man-made paradise. This was only the start of our Murray River adventure so stay tuned for more amazing scenery as we make our way down to South Australia tracing this mighty river.

Spread the love
Discover Murray RiverLake MulwalaLake Mulwala SunsetsMurray RiverYarrawonga
By 50 Shades, February 26, 2018 Kathy was a 50 something year old when she started up this blog 6 years ago, but has since turned over another decade and is now in her early 60s. She is married with two adult children and lives on the Tweed Coast of New South Wales, Australia. Kathy enjoys living life to the fullest and loves to keep fit and active by maintaining a healthy diet and exercising regularly. Some of her interests include reading, photography, travelling, cooking and blogging! Kathy works part-time as a freelance writer but her real passion is travelling and photographing brilliant destinations both within Australia and overseas and writing about it.