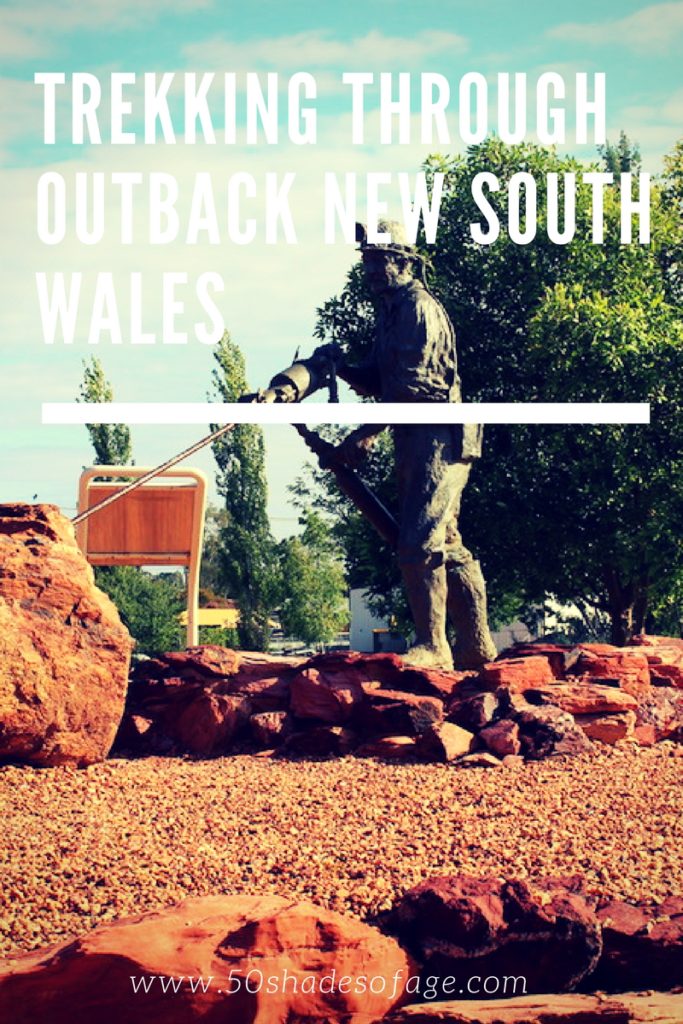 During our travels back and forth on the East Coast of Australia, we’ve generally stuck to the coastal regions, and very rarely ventured into the centre of the vastness of New South Wales. On our recent caravan trip down to South Australia we decided that trekking through Outback New South Wales was not only a more direct route, but it revealed a whole new world.

There are a network of highways that traverse the Outback region of New South Wales. Coming over the border from South Australia on the Barrier Highway, you can then select from the Silver City Highway, Kidman Way, Newell Highway or New England Highway. On this occasion we decided to take the Newell Highway that would bring us north to the Queensland border at Goondiwindi. 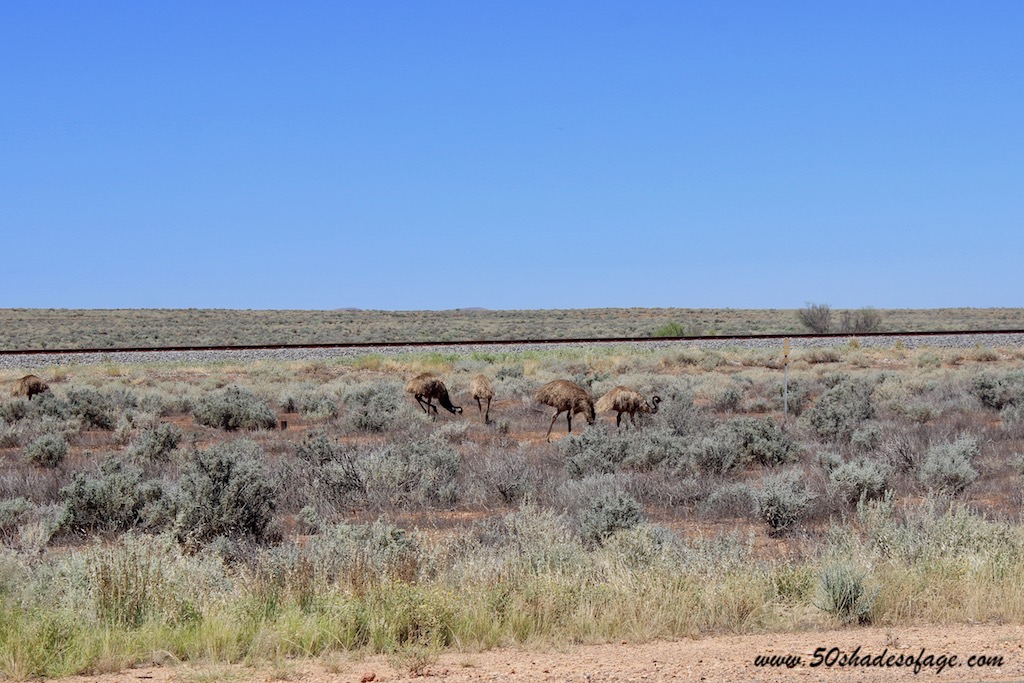 Emus in the outback of New South Wales

This iconic Outback New South Wales town, is just across the South Australian/New South Wales border, and is the birthplace of the “Big Australian” mining company – BHP. We arrived here after departing the Barossa Valley in South Australia and a 462km drive through kilometres and kilometres of stark barren countryside, until we reached the Barrier Ranges near Broken Hill. For me it was like discovering an oasis in the middle of the desert! 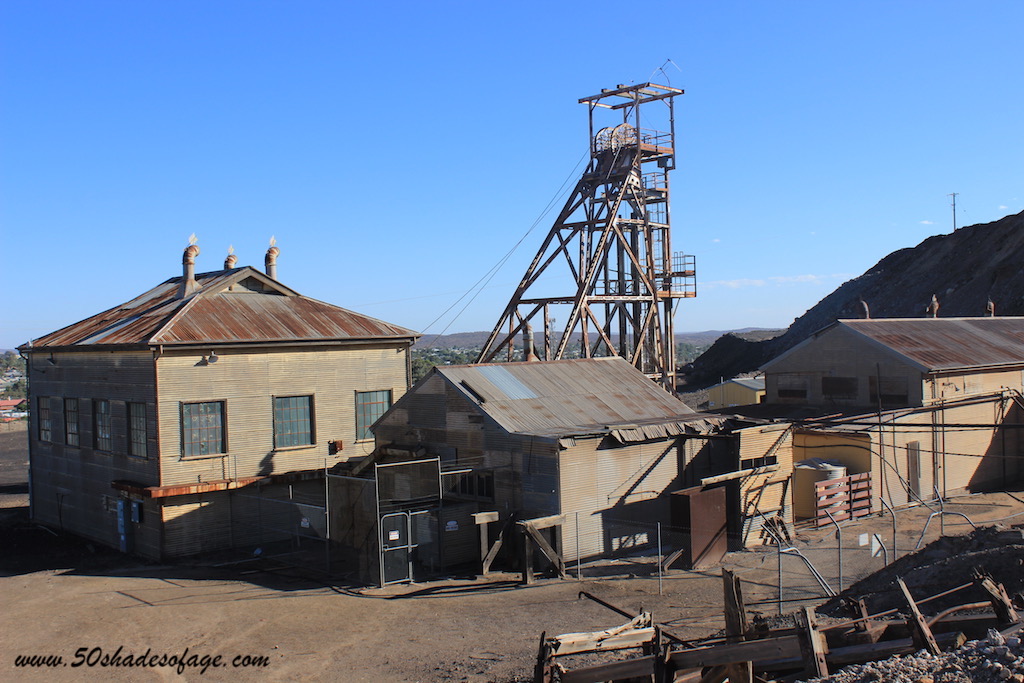 We immediately found our camping spot for the night at the Broken Hill Racecourse grounds. Our lovely green grassy campsite had power and we had access to toilets and hot showers in the Jockey’s rooms at the Turf Club. We discovered later on that night that the local kangaroos come in after dark to graze on the lovely green grass, and we had to be very careful where we trod the next morning, with kangaroo droppings everywhere. 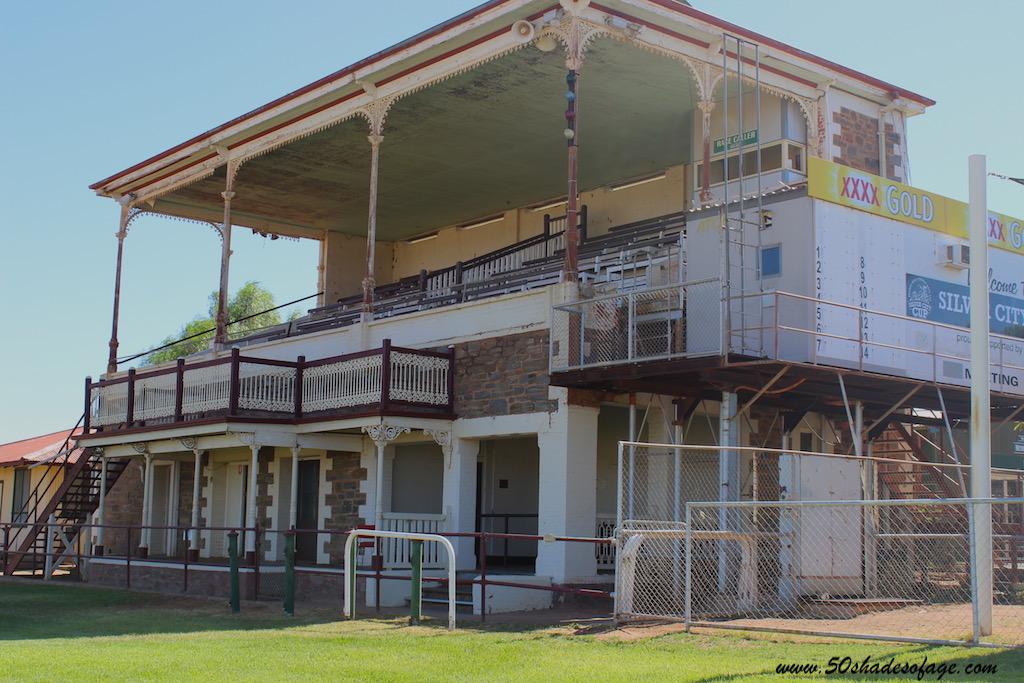 The Grandstand and Jockey’s Rooms at the Broken Hill Racecourse

Although our time was limited in Broken Hill, we did take a quick look around the town and drove up to Joe Keenan Lookout for a panoramic view of Broken Hill and the Line of Lode. Here we strolled through the Line of Lode Miner’s Memorial on the edge of the mullock heap that commemorates the 900 miners who lost their lives while working underground. It’s an emotive experience to say the least. 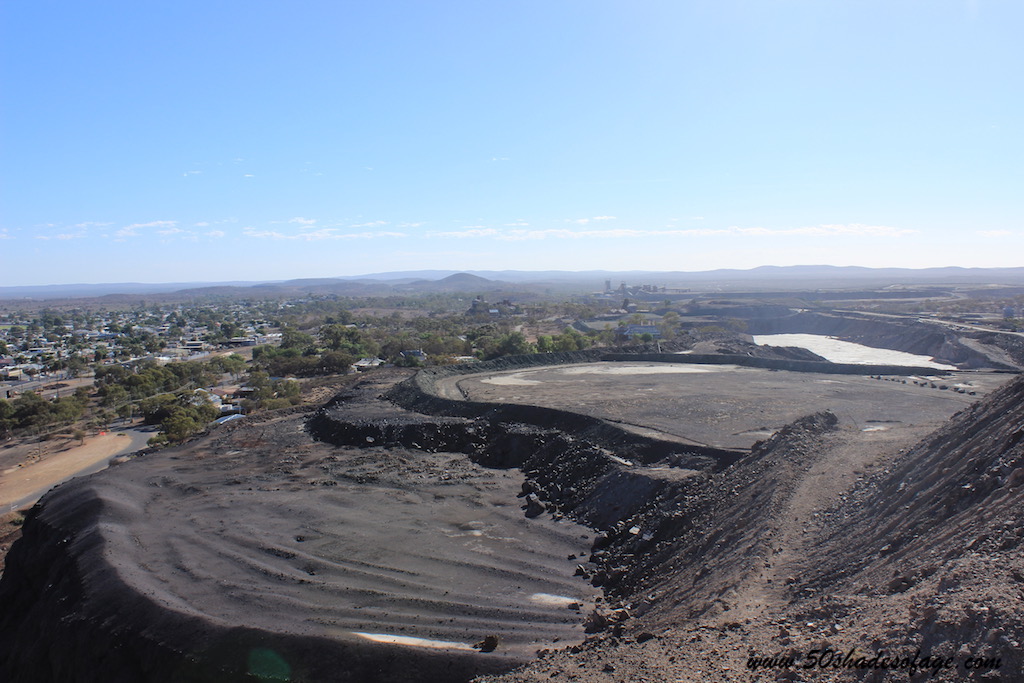 Views over Broken Hill from the Lookout

If we had more time here there are heaps more things to do and see in this interesting outback town, including visiting the Living Desert Sculptures at sunset, the educational GeoCentre, Broken Hill Regional Art Gallery, Pro Hart’s gallery, or a short drive to the historic mining town of Silverton and the Mundi Mundi Plains. 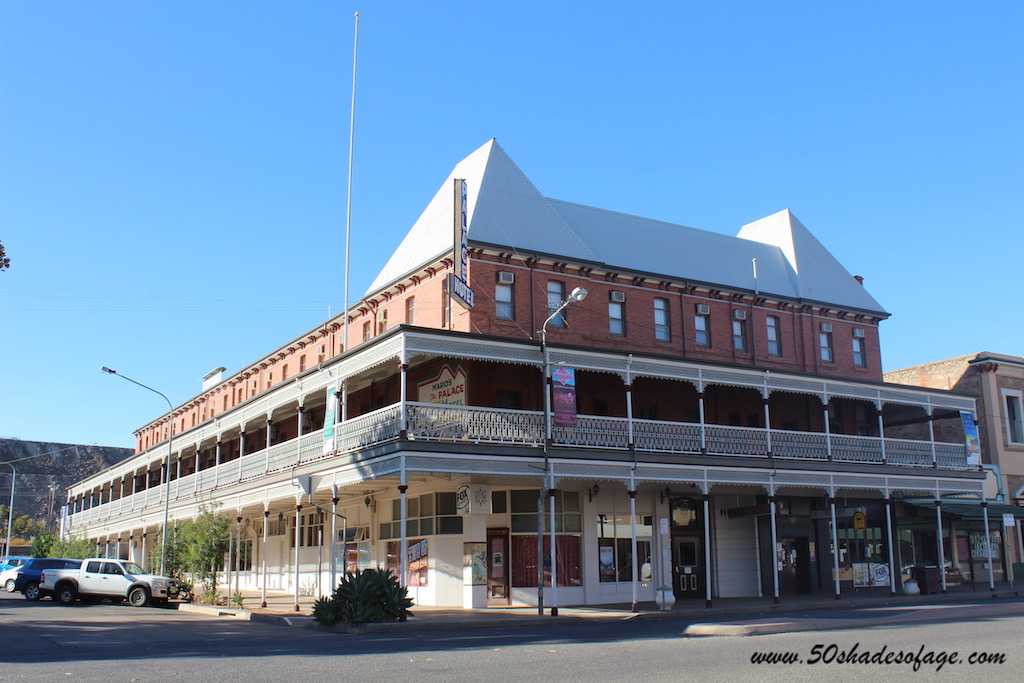 The Palace Hotel in Broken Hill

We had a another big day of driving ahead of us as we decided to head east towards another iconic mining town – Cobar. The 458km drive took us through Wilcannia and the across the Darling River, that was a mere trickle. It was once the third largest inland port in the country during the great river boat era of the mid-19th century. However these days it’s a little run down and neglected. We stopped here to get petrol and enjoyed a very nice cappuccino and homemade scone at the local cafe across the road from the river. 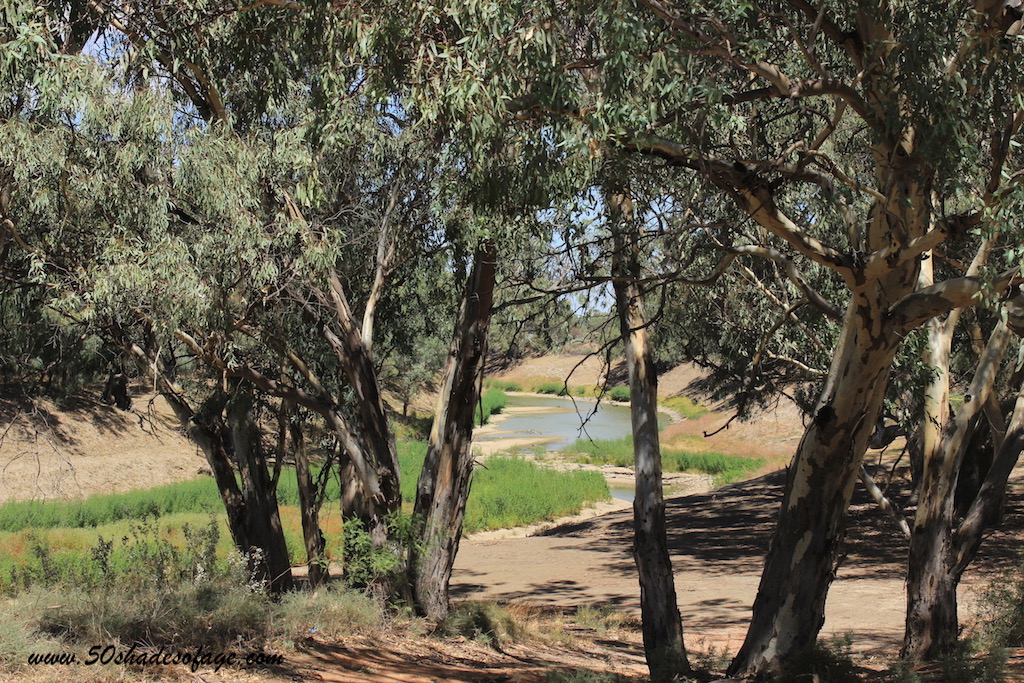 The Darling River at Wilcannia

I was looking forward to seeing Cobar as my brother owned and operated a motel here years ago. This rich mining town was as neat as a pin and we found it to be friendly and hospitable. 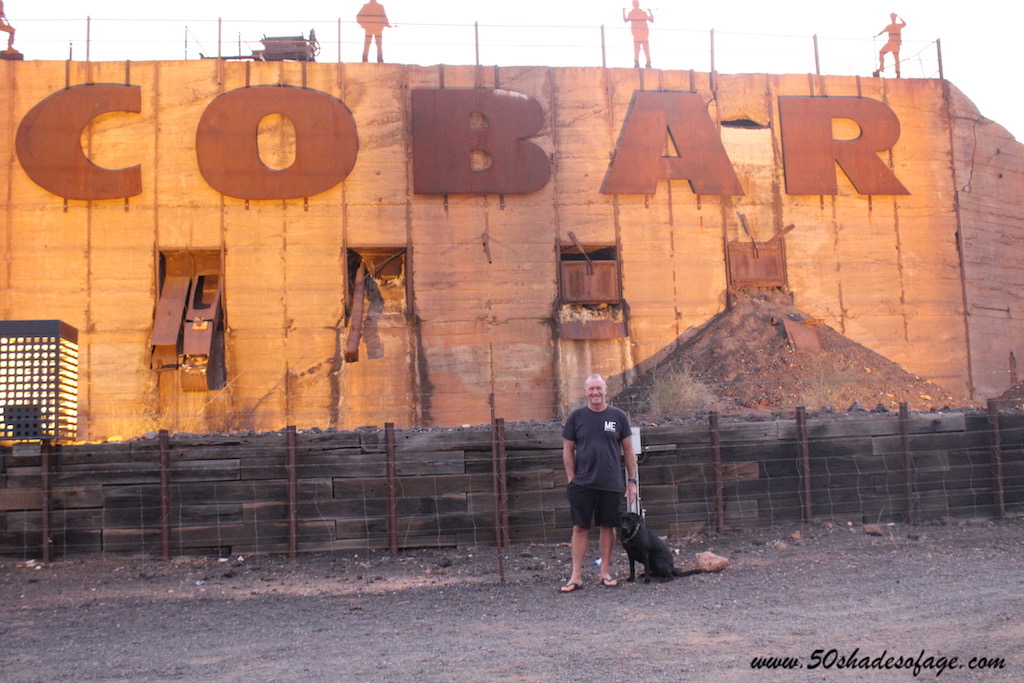 It’s main attraction is the drive up to Fort Bourke Lookout overlooking the awesome sight of the New Cobar Open Cut Gold Mine. Also a must see its the incredible Cobar town sign on the eastern side of town and the Cobar Mining Heritage Park. 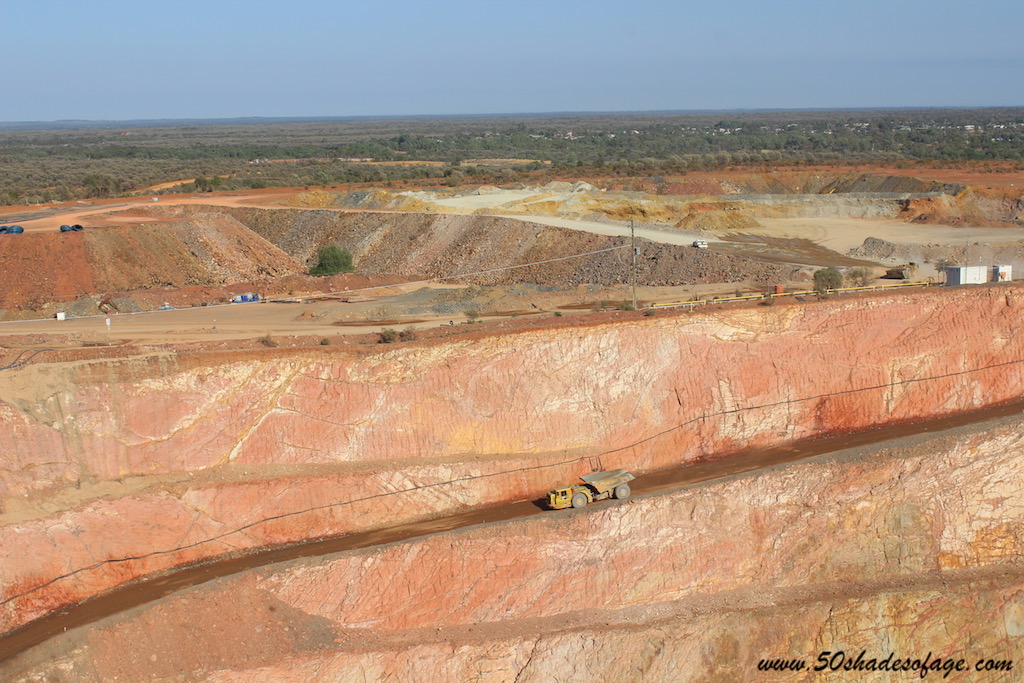 The open cut gold mine in Cobar

Cobar is the gateway to the Kidman Way and the real Dinky-Di Outback New South Wales towns of Tilpa, Louth, Nymagee, Candelego, Mount Hope, Euabalong, to the Back O’ Bourke and beyond.

The Mining Heritage Park in Cobar

Once we left Cobar we continued onto the town of Nyngan and took a couple of arterial roads via Warren and Gilgandra, where we joined the Newell Highway and drove onto the town of Coonabarabran. We stopped in Nyngan for morning tea and a short stroll around this interesting little town on the Bogan River, taking a photo alongside the ‘Big Bogan’ statue. 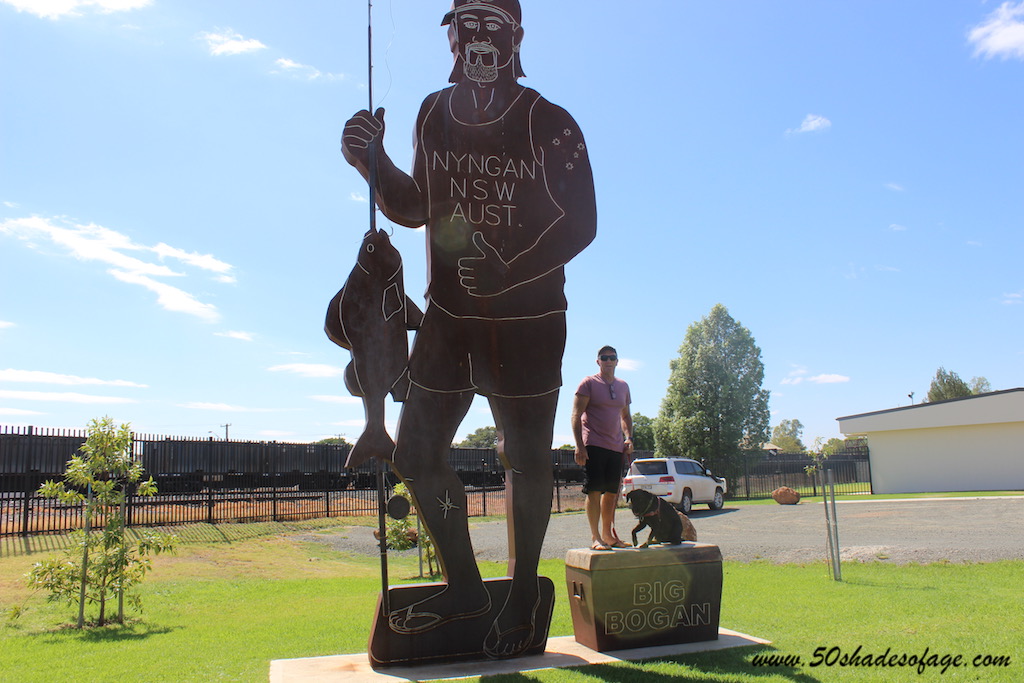 The Big Bogan in Nyngan

We reached the agricultural town of Gilgandra on the Castlereagh River, where we enjoyed lunch in the park on the banks of the river. This country town in the central west region of New South Wales, services the surrounding wheat growing area, together with other cereal crops, and sheep and beef cattle. 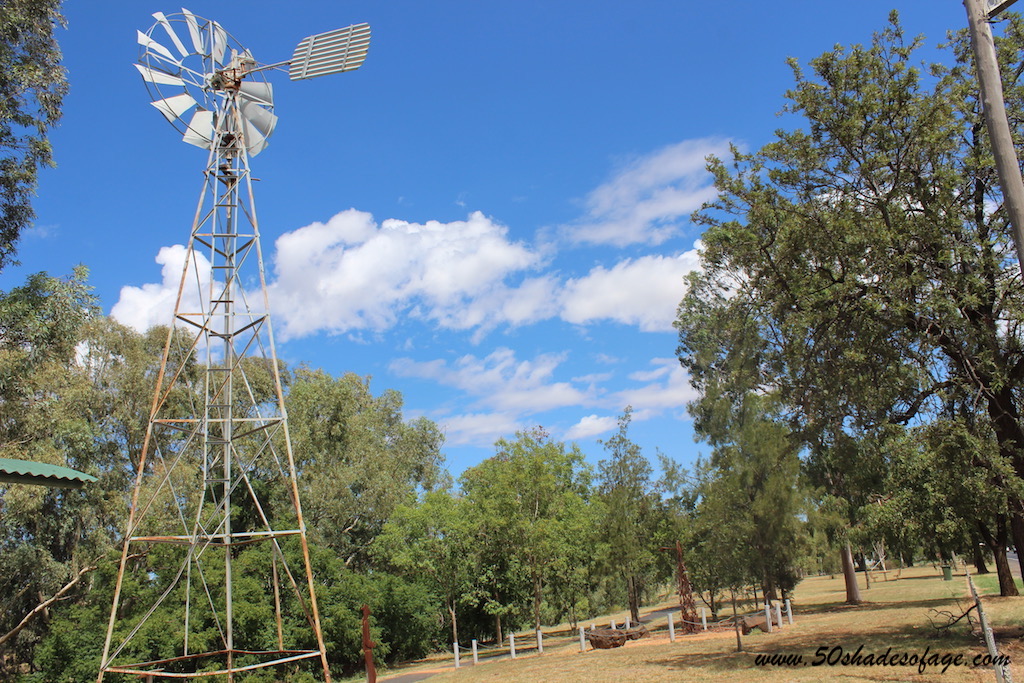 Gilgandra on the riverfront

The drive from Gilgandra to Coonabarabran came as a great surprise to us, as we wound our way up through the scenic Warrumbungle Mountain Range. The Warrumbungle National Park is Australia’s only Dark Sky Park, renowned for its crystal clear starry skies, perfect for star-gazing. The dramatic rocky spires, domes, forested ridges and deep gorges in the national park are also extremely popular for bushwalking and camping. 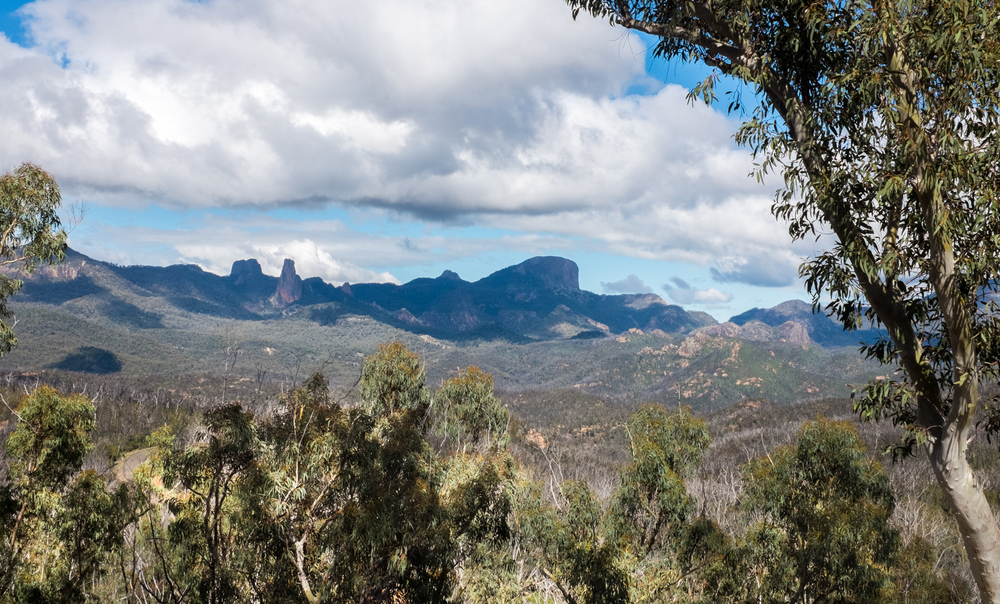 The rocky spires and domes of the Warrumbungles

Coonabarabran is the Astronomy Capital of Australia and hosts Australia’s largest optical astronomy research facility at Siding Spring Observatory. But there are more observatories at Milroy Observatory, Warrumbungle Observatory and at Coona Astro Ventures. 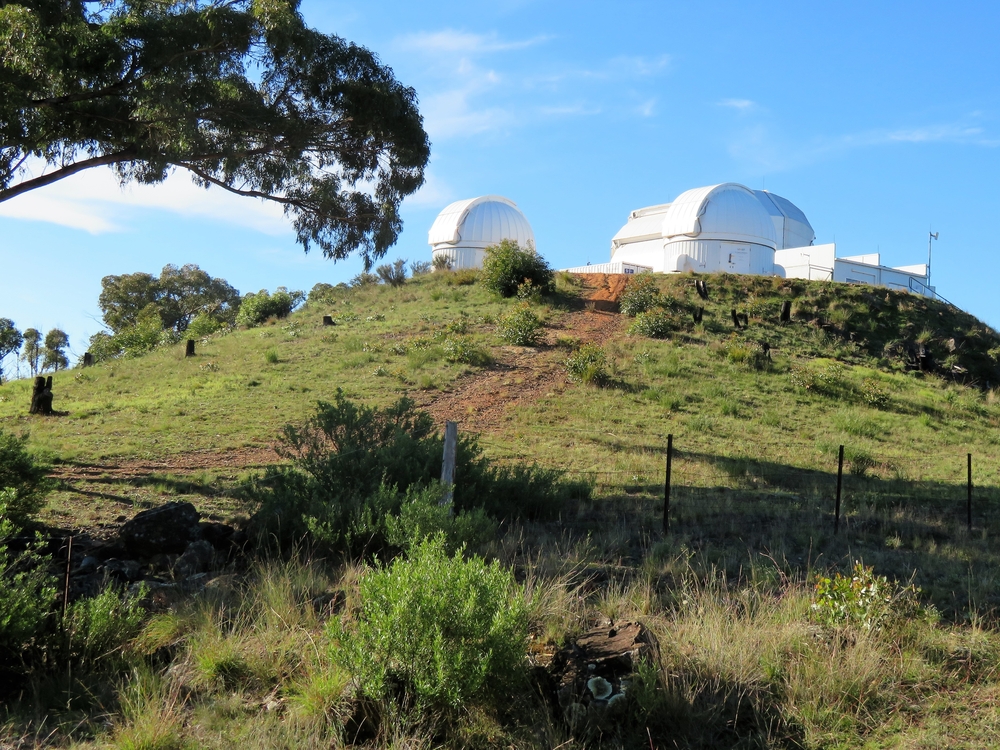 We spent the night on a spacious drive-through caravan site at the John Oxley Caravan Park amongst shady trees and acres of green grass. The caravan park is located on the northern end of town near the Castlereagh River and only a short stroll into town. 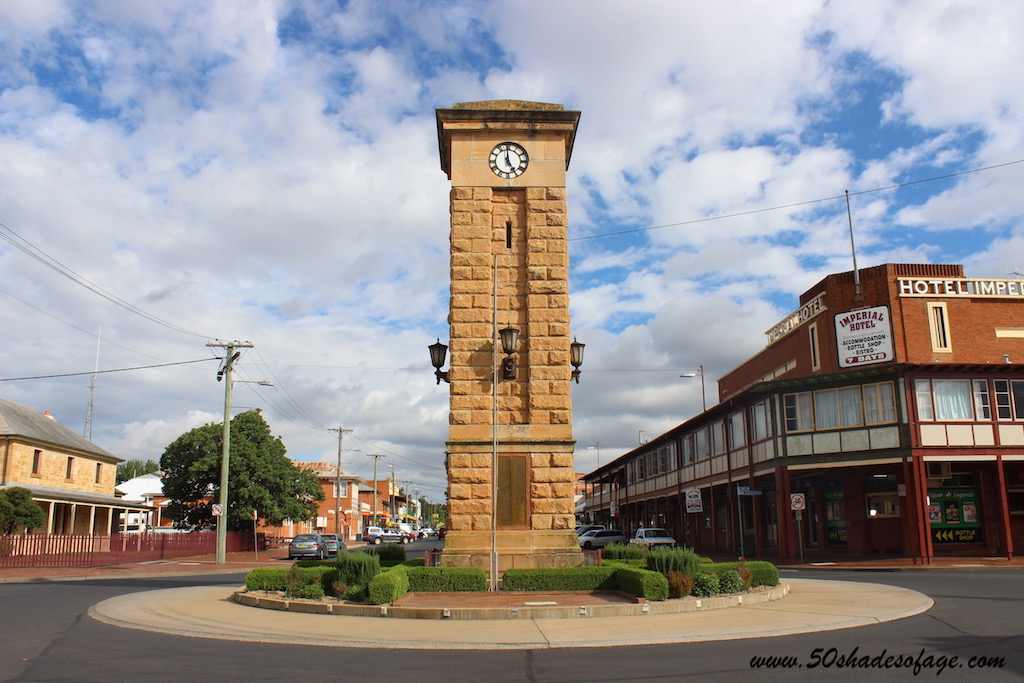 The Clock Tower in Coonabarabran

We reluctantly departed the Warrumbungle region the following morning, vowing that we would return to explore deeper and visit the national park and observatories on a future trip. We drove north via another vast stretch of bushland and forests, known as The Pilliga. The forest covers are area of 500,000 hectares and is a nature lover’s wonderland with prolific bird life, rolling hills, mighty sand dunes, sandstone caves, expansive heathlands, and towering ironbarks and white cypress trees. 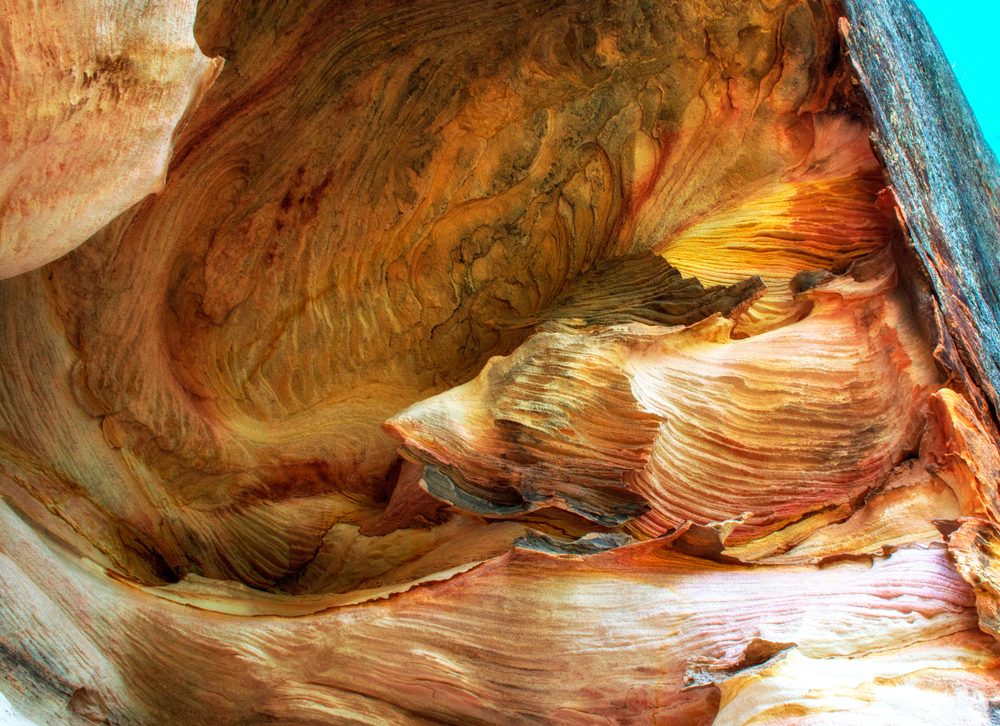 The Sandstone Caves in The Pilliga

The Pilliga also boasts Yarrie Lake and the mineral-rich Pilliga Bore Baths that have therapeutic benefits to those who soak in them.

Arriving in Narrabri for morning tea, we discovered this town is famous for being “Australia’s sportiest town”. The Sporting Wall of Fame in the centre of town honours the achievements of sportspeople who contributed to this claim to fame. 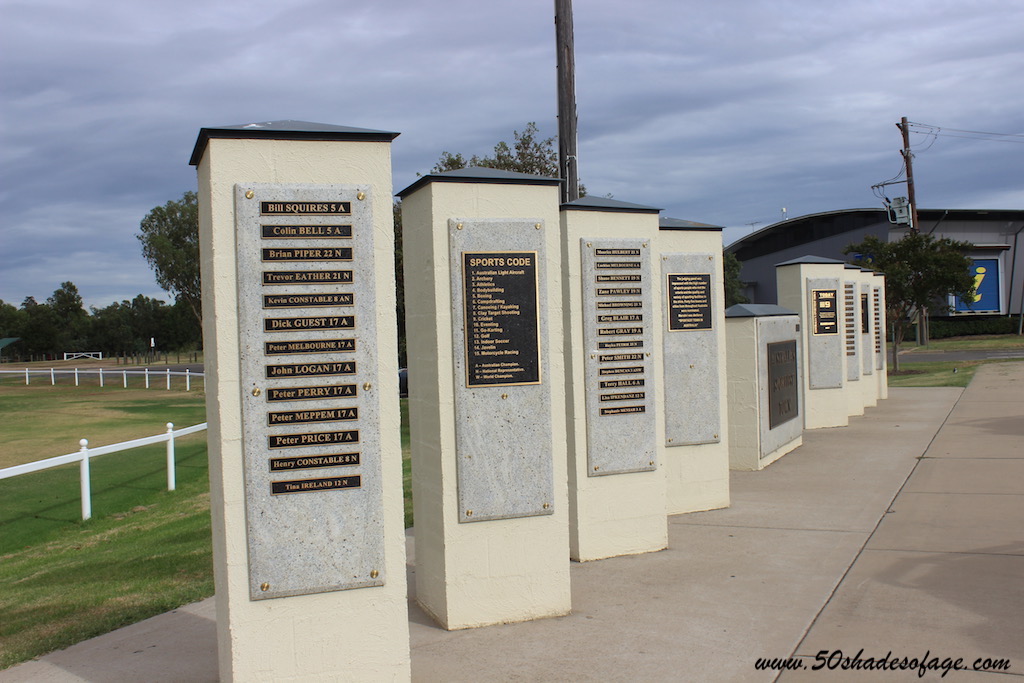 Sporting Hall of Fame in Narrabri

Narrabri is the gateway to Mt Kaputar National Park, 52 km east of town, where you can bushwalk or rock climb. There is also the awesome sight of the almighty wall of organ pipes at Sawn Rocks within the national park. 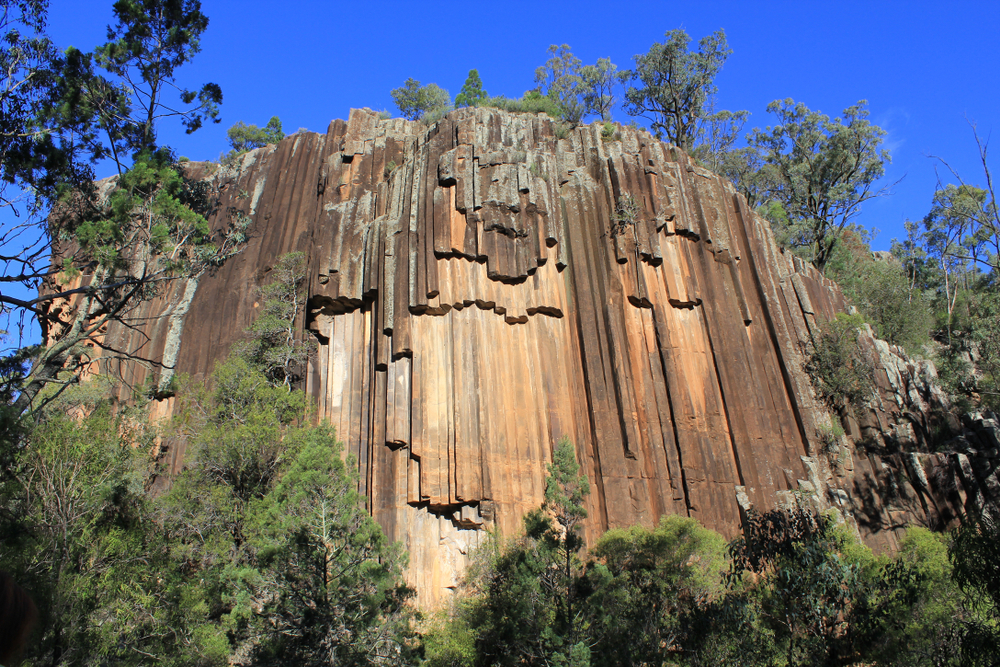 In keeping with the astronomy theme of the region, the CSIRO Australia Telescope is located a few kilometres west of Narrabri.

Once we got out of the town of Narrabri we drove through the Moree Plains, home of Artesian Water Country and northern wheat belt.  We reached the town of Moree at lunchtime and were on a quick mission to explore this country town that my husband’s grandfather was mayor of in the 1950s. 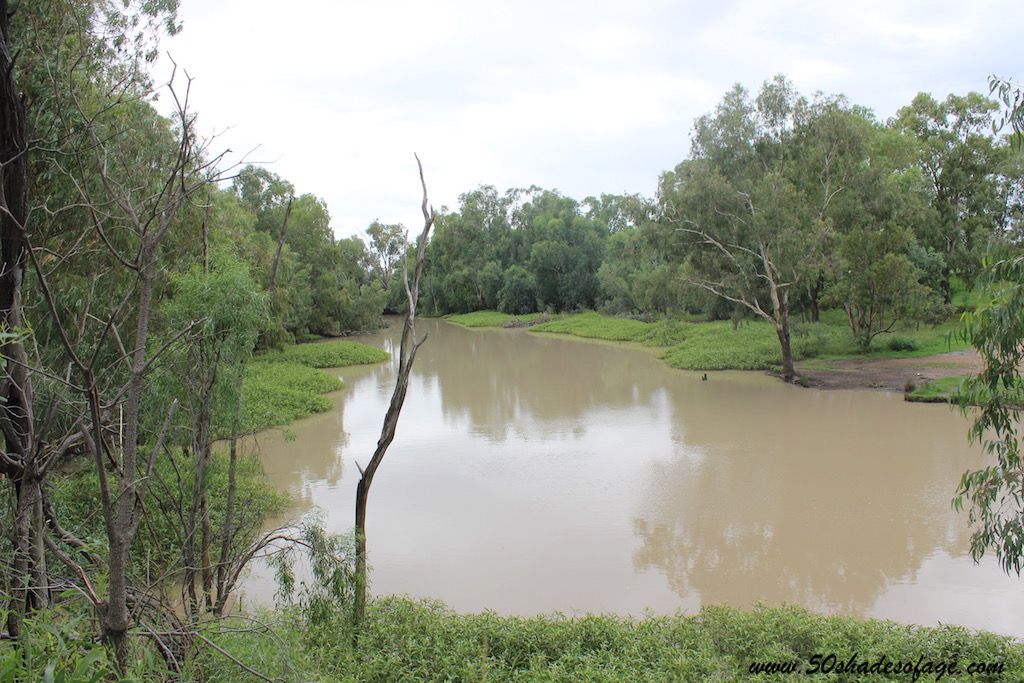 The town of Moree features the splendour of the bygone Art Deco era, as evidenced through its architecture and the many art deco buildings in the town. You can take a heritage walk through the town or take a refreshing dip in the mineral-laden Artesian waters of their pools. 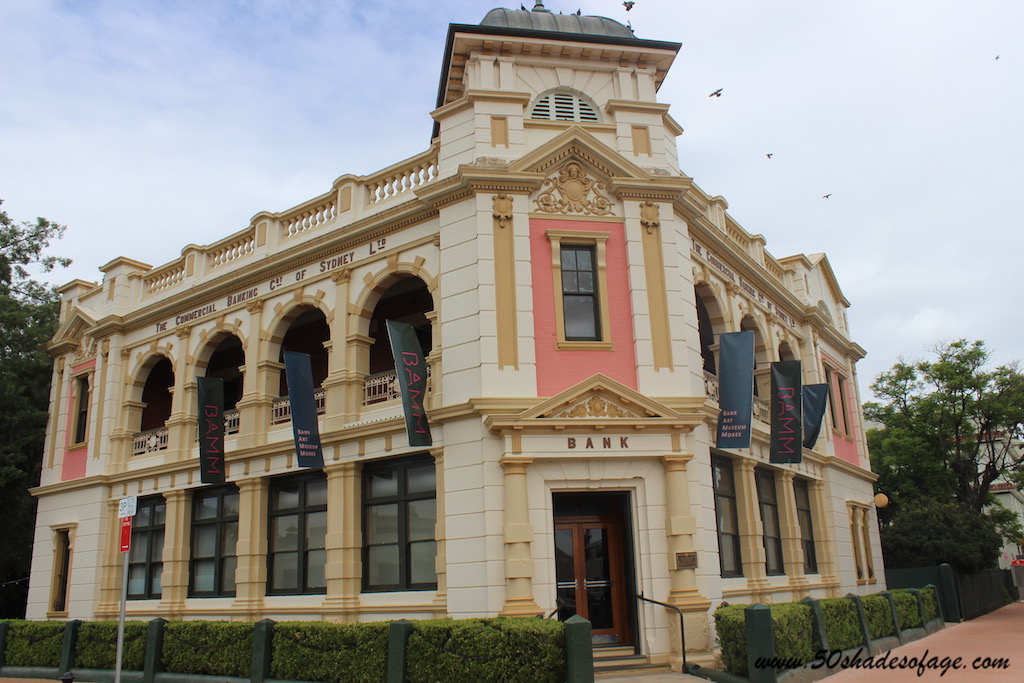 One of the art deco buildings in Moree

It was only a mere 126kms to Goondiwindi and the border to Queensland. The town is located on the Macintyre River at the junction of five major highways and is a very popular stop-over destination. But we were more interested in finding the iconic statue of the “Goondiwindi Grey” – Gunsynd, that stands proudly along the riverfront in town. 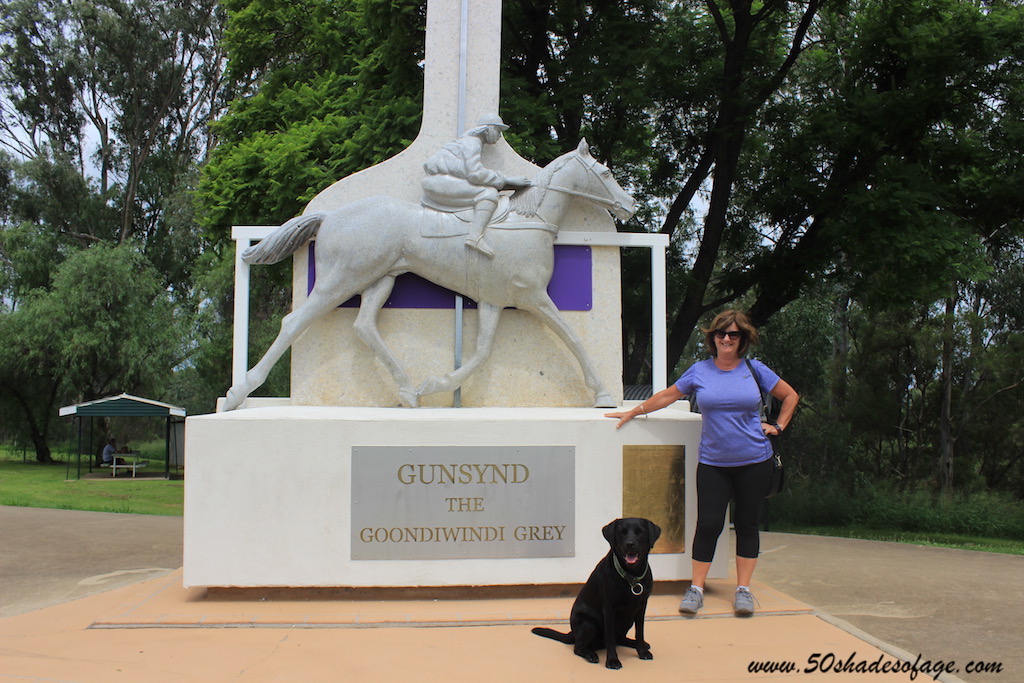 The Goondiwindi Grey statue of Gunsynd

There is a very pretty 4km walkway along the tree-lined Macintyre river featuring interpretive signs, the original historic Border Bridge connecting NSW and Qld, and the charming Customs House and Museum. 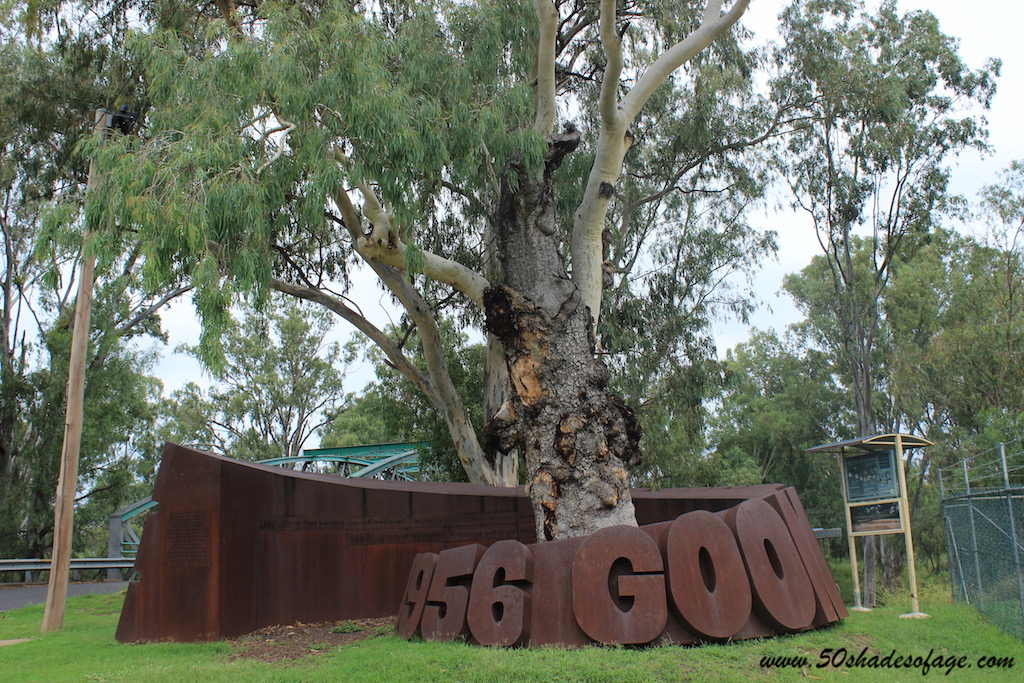 Our camping spot for the night was at the nearby country town of Inglewood, where we mingled with the friendly locals at the Bowls Club for afternoon drinks and then a counter meal at one of the local Pubs. We free camped on our last night in the picturesque setting of a park alongside the Dumaresq River. It was a fitting way to spend our last night of our trip before reaching our home the following day. 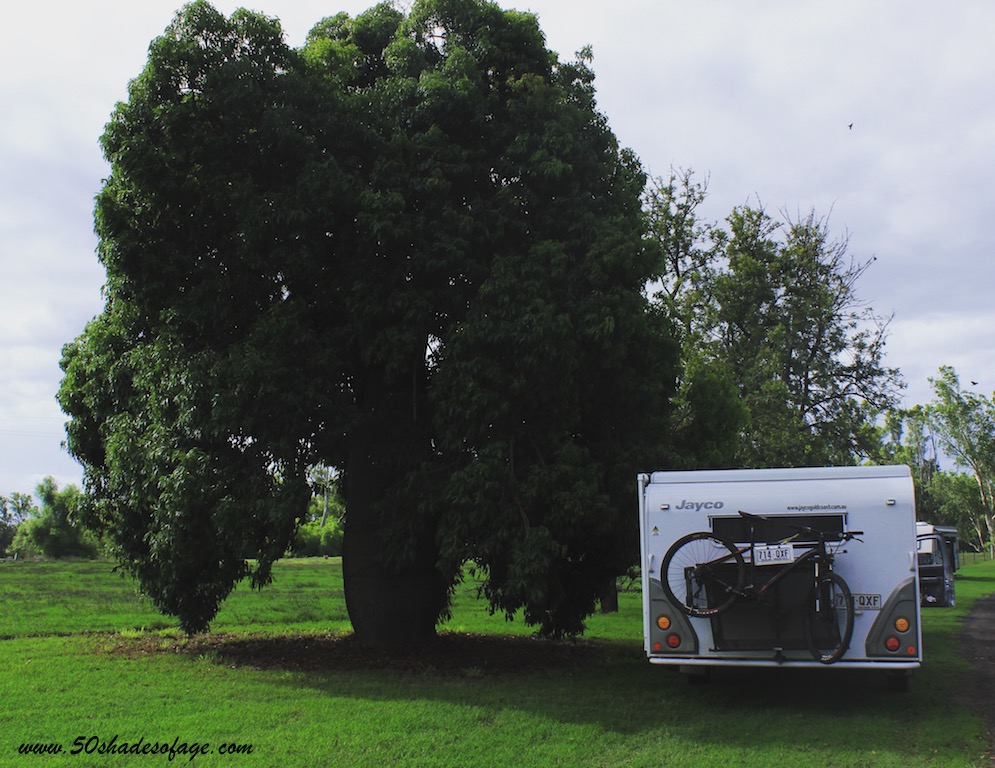 Our campsite at Inglewood

Outback New South Wales, the Barrier Highway and the Newell Highway, was an experience that I would recommend to all travellers to try at least once. The diversity of terrain is astounding and the country towns warm and welcoming. It is without a doubt what Australia is all about – good old country hospitality!

Spread the love
Broken HillCobarCoonabarabranGoondiwindiNarrabriNewell HighwayOutback New South WalesOutback NSWTravel NSW
By 50 Shades, May 7, 2018 Kathy was a 50 something year old when she started up this blog 6 years ago, but has since turned over another decade and is now in her early 60s. She is married with two adult children and lives on the Tweed Coast of New South Wales, Australia. Kathy enjoys living life to the fullest and loves to keep fit and active by maintaining a healthy diet and exercising regularly. Some of her interests include reading, photography, travelling, cooking and blogging! Kathy works part-time as a freelance writer but her real passion is travelling and photographing brilliant destinations both within Australia and overseas and writing about it.