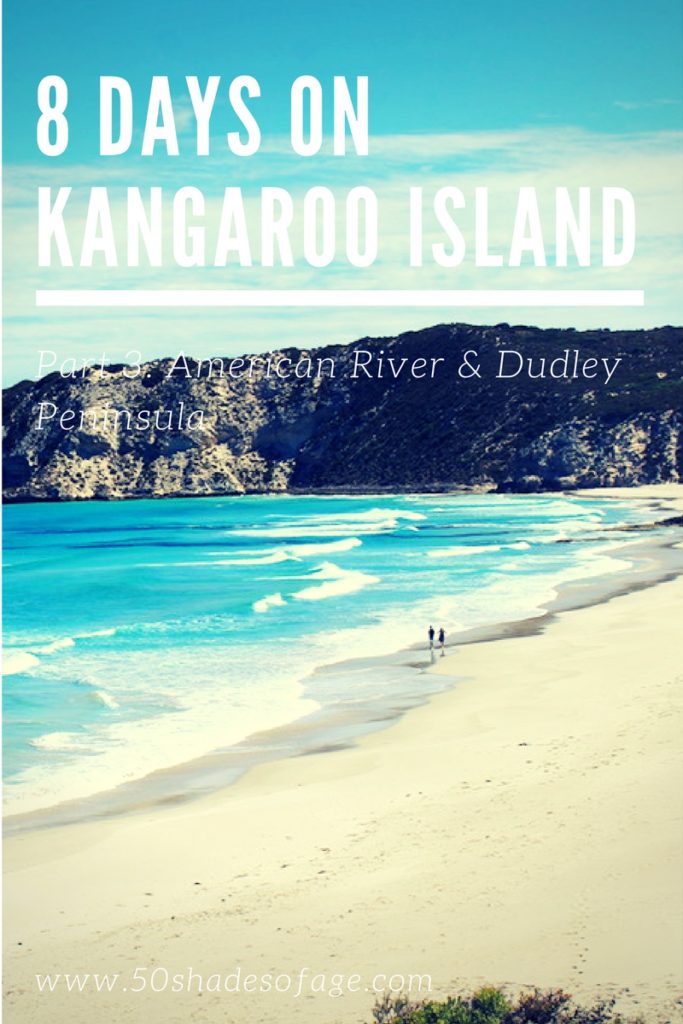 We were perplexed as to why an Australian tourist place would be called American River and soon discovered why. It was due to a group of American Sealers who landed in the region in 1803, camping alongside the narrow inlet from the sea, that they mistook to be a river. 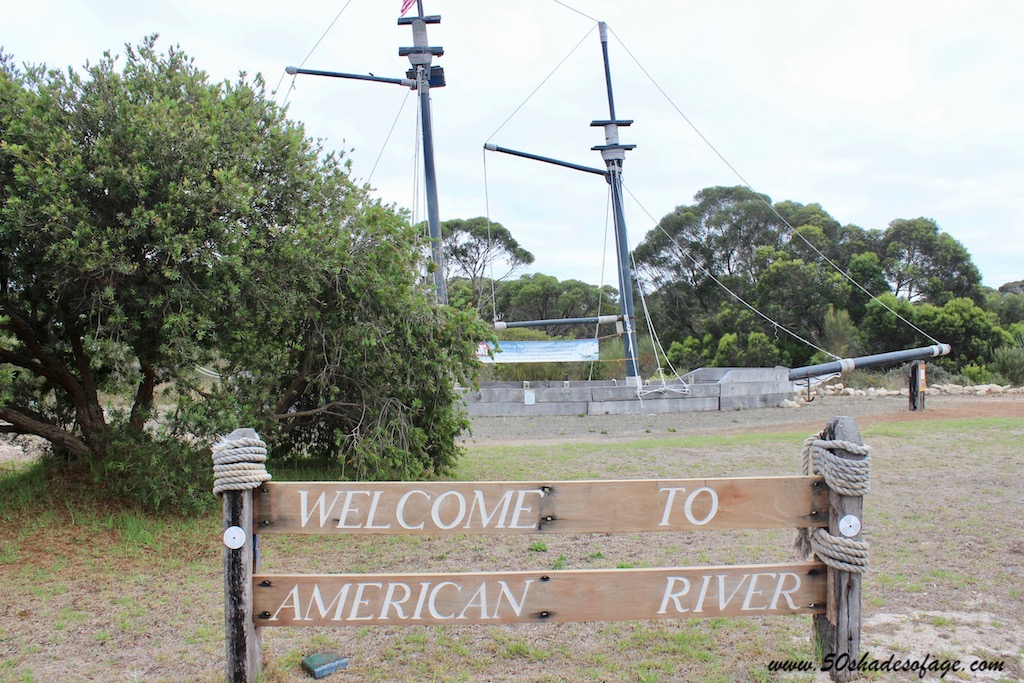 We discovered that the turn off into American River wasn’t hard to miss as it has a representation of the schooner called Independence, that the American Sealers built in 1804, located on the side of the road into town. 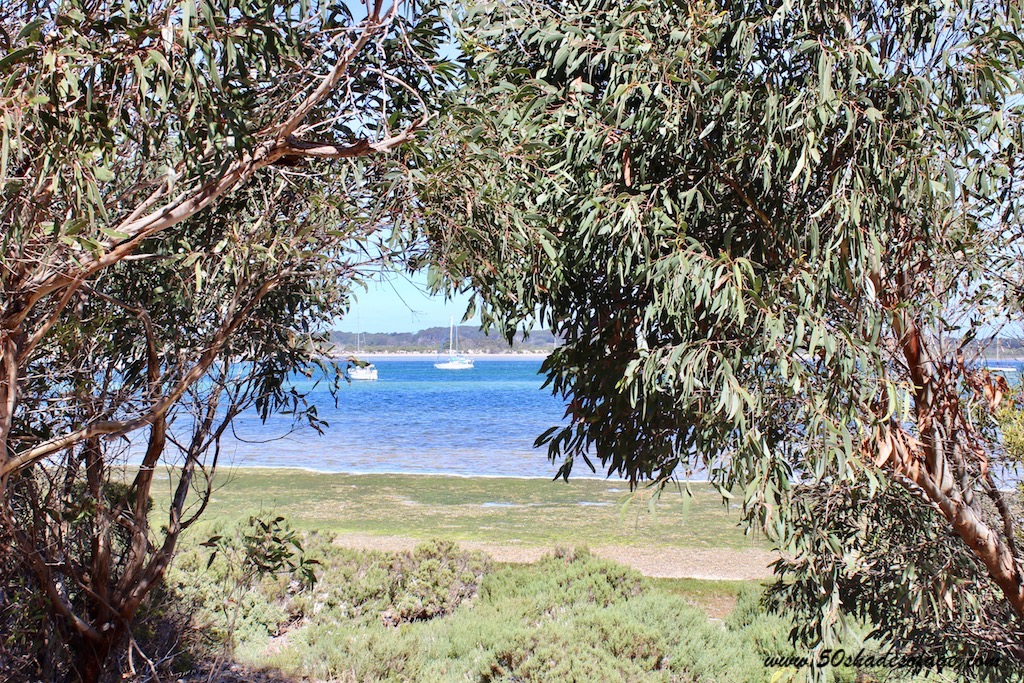 View from our campground over Pelican Lagoon

We pulled up at the Council Campground that was perfectly located on the American River inlet or Pelican Lagoon, with a camp kitchen, picnic tables, hot showers, flushing toilets and power. Right nearby was the jetty, The Deck Cafe and Independence Boathouse. We were set to spend two wonderful nights here overlooking the tranquility of the inlet, an abundance of waterbirds and beautiful yachts moored in the water. 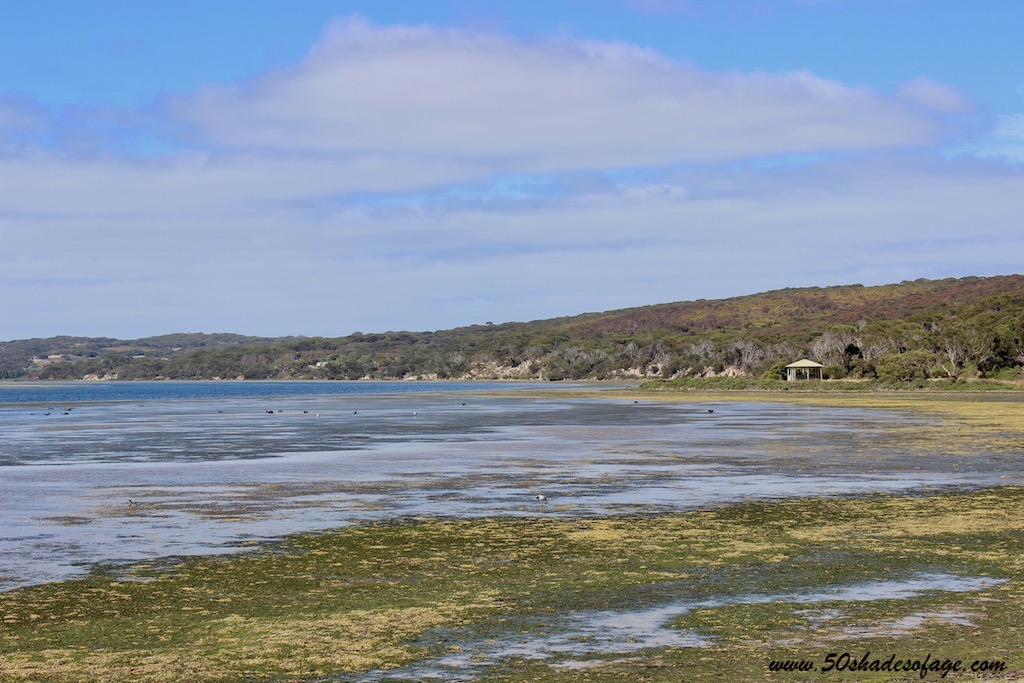 There is a little township at American River with a small supermarket, post office, restaurants, takeaways, bottle shop and service station. There are plenty of options for accommodation too with deluxe motel rooms, quality B&Bs, self contained cabins & units, plus the local camping ground, where we stayed. 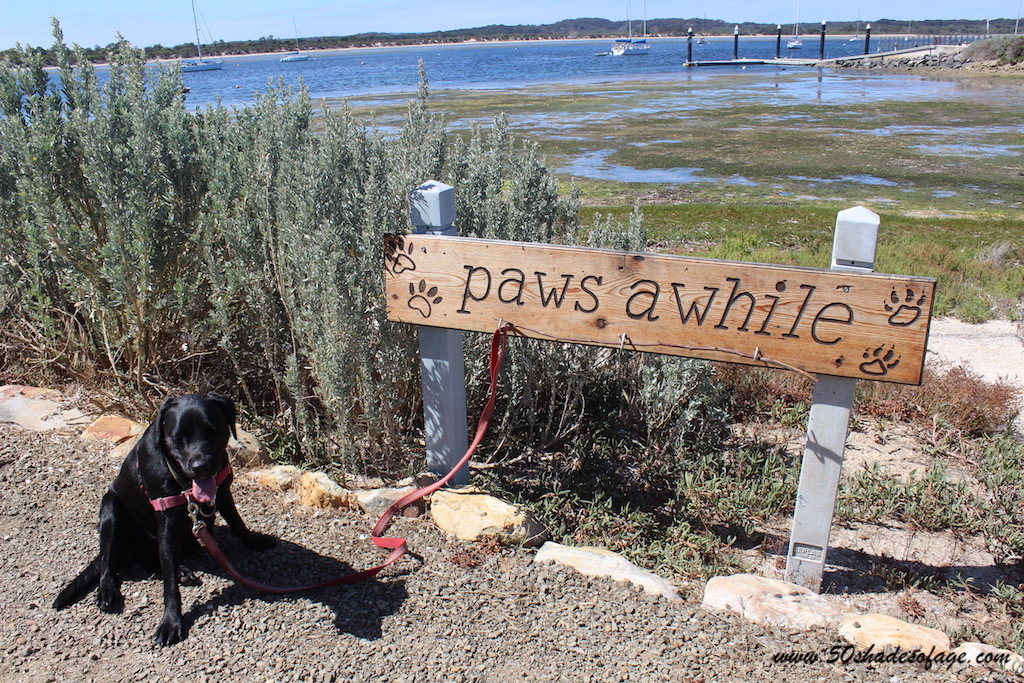 It has a strong oyster industry and oysters are available seasonally in restaurants along the harbour and in the town itself. There is a jetty and a large boathouse where the replica Independence schooner is undergoing construction. Next door to that is The Deck Cafe overlooking the jetty and Pelican Lagoon, where we visited every morning for our caffeine fix. 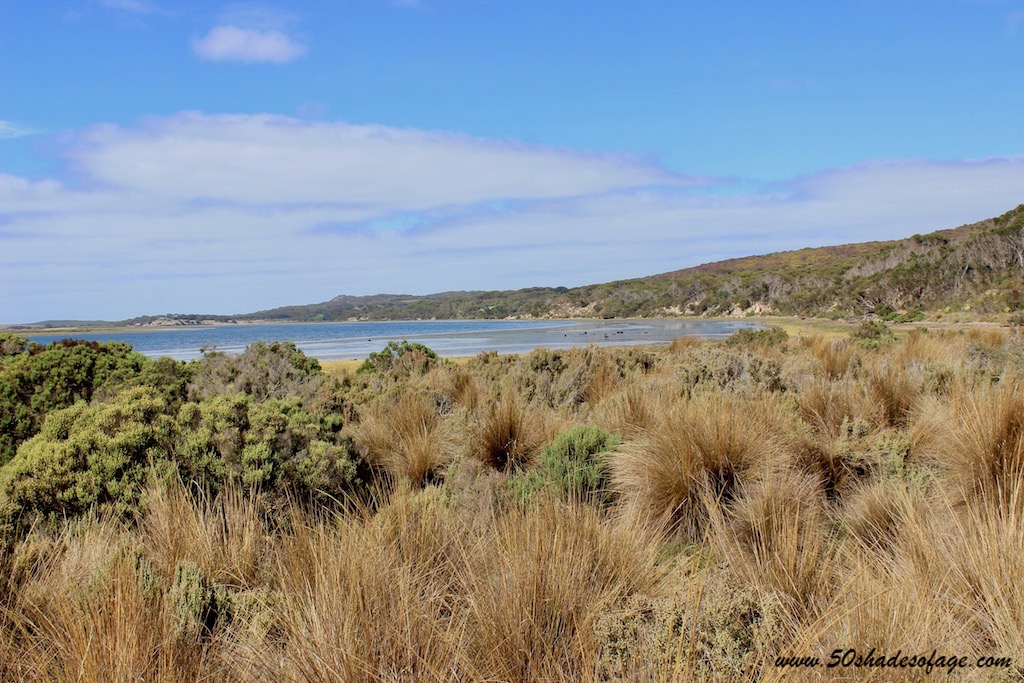 Vegetation on the shores of Pelican Lagoon

Pelican Lagoon, is a protected Aquatic Reserve thanks to its natural fish nursery. It is here where we found the Pelican Lagoon Conservation Park, a 397 hectare nature reserve just south of the region’s main town. The park is spread across the island and includes five small inlets that provide habitat for woodland and wetland birds. 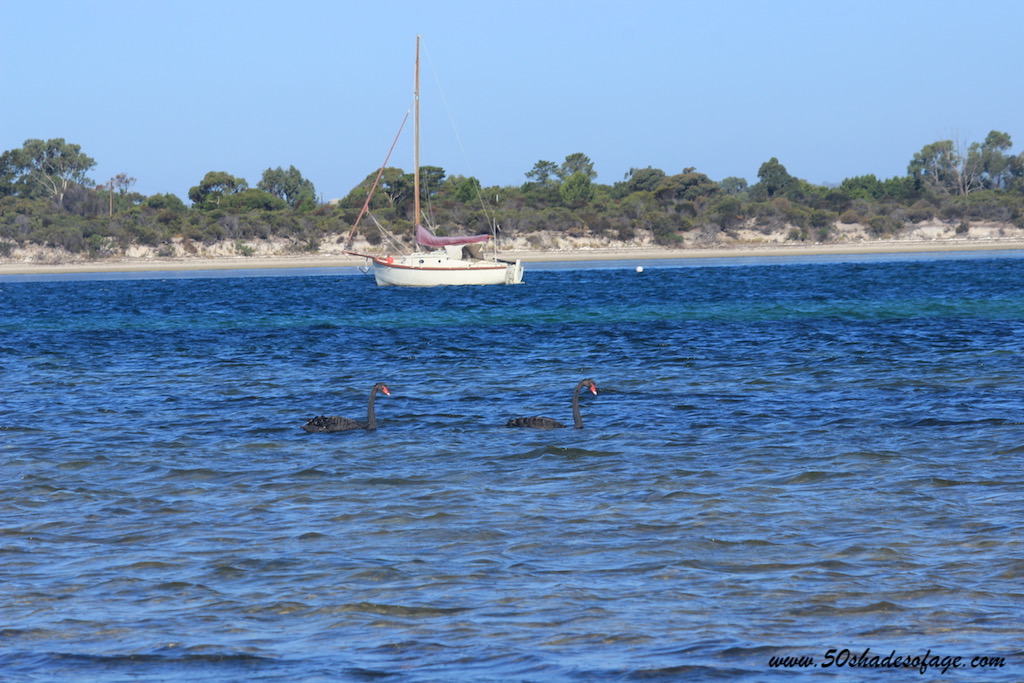 Some of the waterbirds on Pelican Lagoon

On our first day we set off on a hike on the Independence Trail that traces the foreshore of the lagoon between the campground and Independence Point. We saw all types of waterbirds and at one point got our feet stuck in the muddy swampy shores of the lagoon. 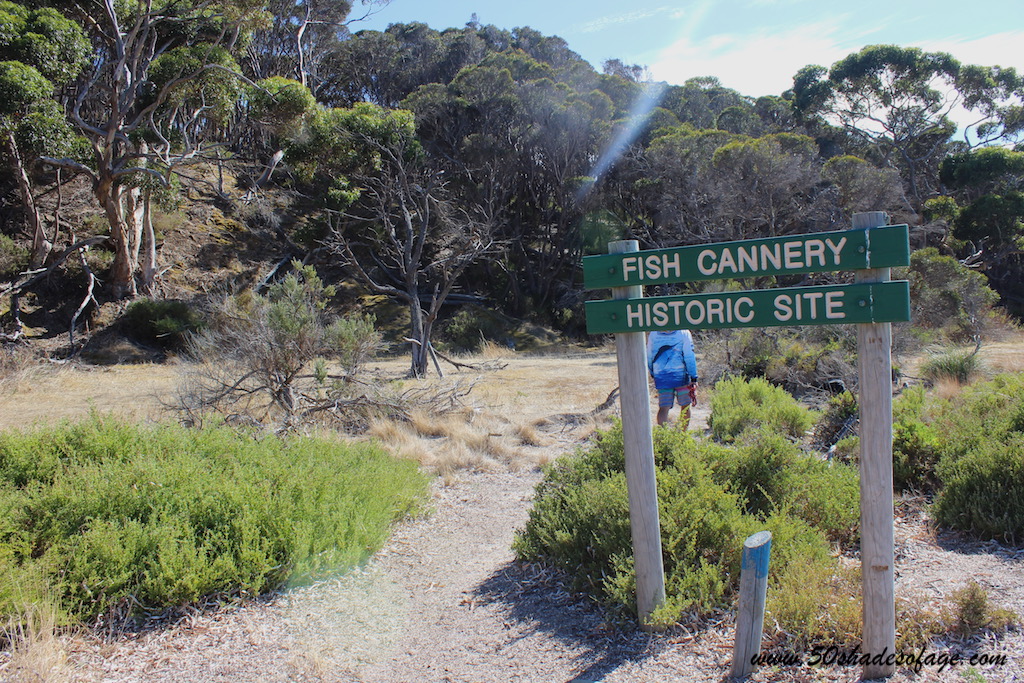 The following day we headed in the other direction at the northern end of the town on the Fish Cannery Walk, where we were hoping to catch a glimpse of Glossy-Black Cockatoos that can often be seen and heard feeding here.  However we were out of luck on this day, but we did see an abundance of other bird species and many wallabies. This path takes you along the coast, past oyster beds to the site of the Historic Fish Cannery. 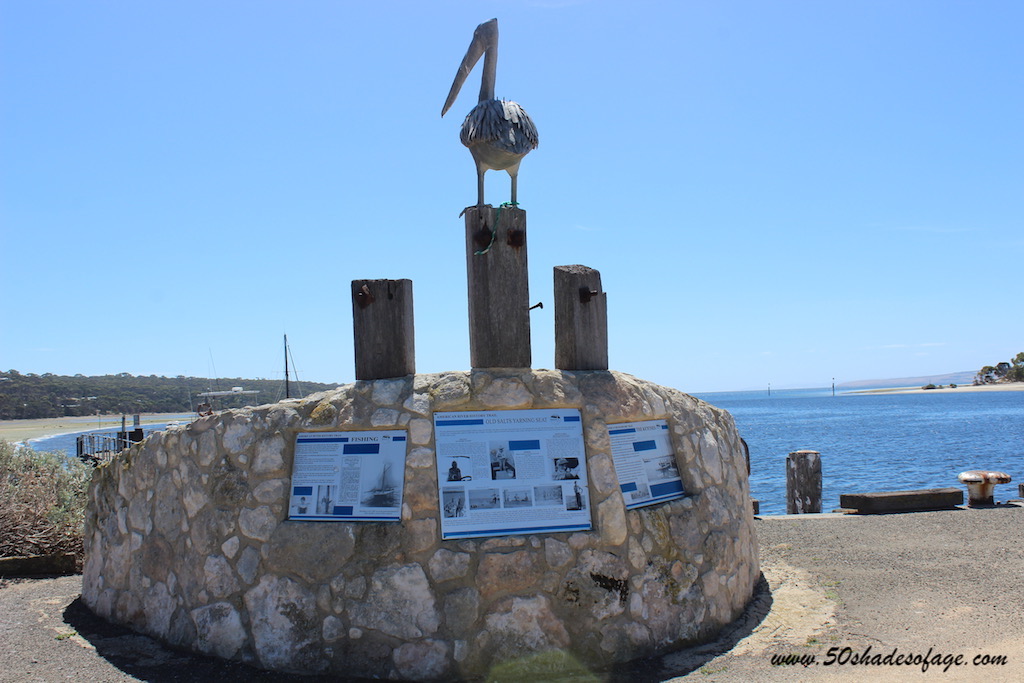 We noticed a small paragraph in our Kangaroo Island brochure written about an interesting stretch of coloured cliffs on a beach to the north of American River, so we decided to drive out and check these out. 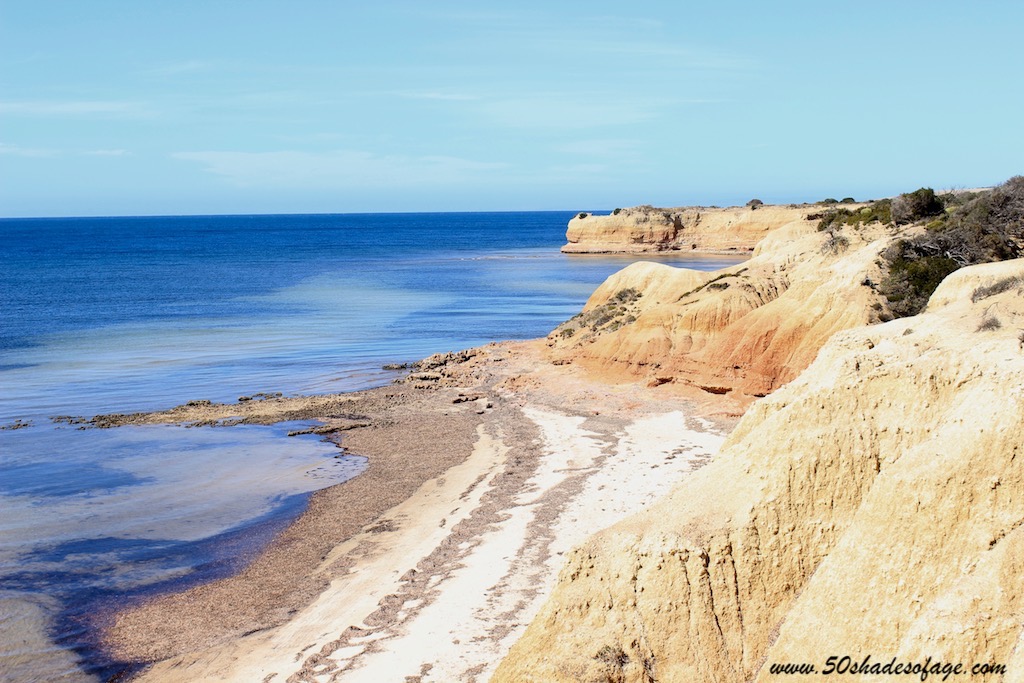 View from the top of the coastal cliffs

Although we had a rough mud map in hand, we got thoroughly lost on the narrow dirt roads that criss cross the island and through extensive farmlands. After what seemed hours we finally found this fascinating beach that is bordered by private property and not easy to access (or park your car). 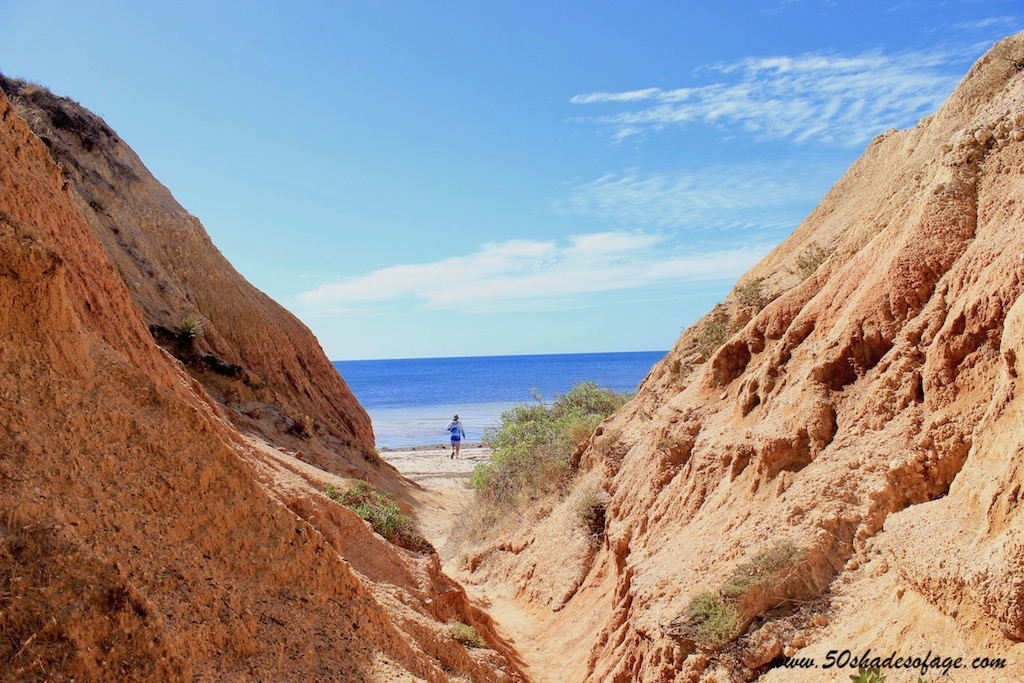 Path down to the beach at Red Banks

However we thought the colourful cliffs of Red Banks would have to rank among the island’s best-kept secrets. Once you view the amazing red and ochre cliffs from above there is kind of a rough path that leads through eroded gullies down to a narrow beach. Here you can walk along the beach, flanked by the red walls and a glassy mirror sea on the other. It was an exquisite sight. 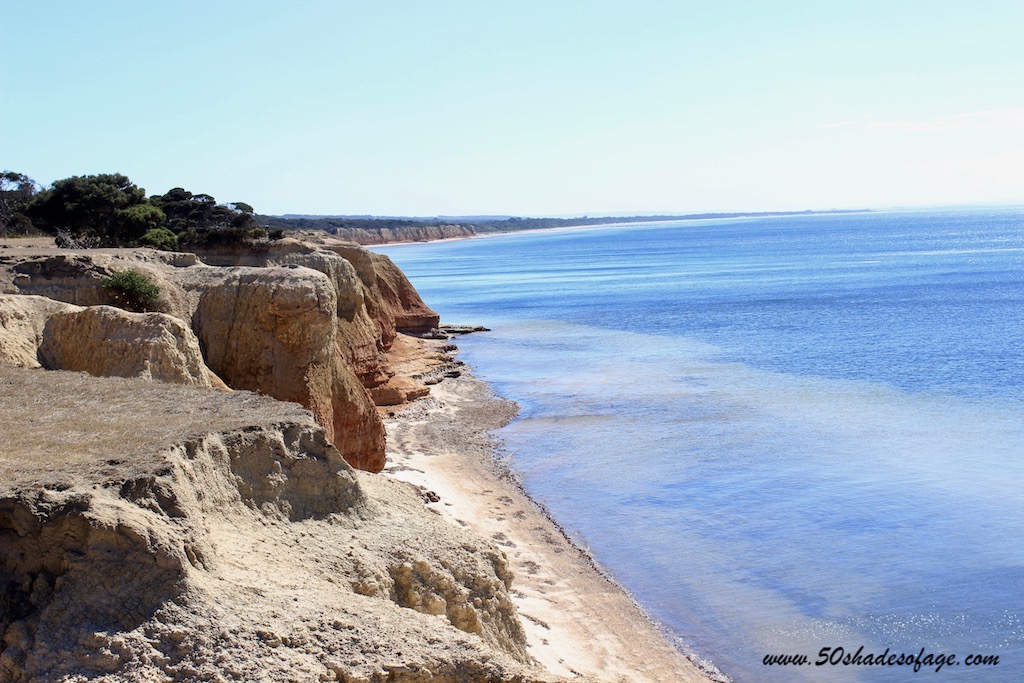 The mirror seas at Red Banks

On the east side of Kangaroo Island is the Dudley Peninsula. As we drove from American River we noticed the land narrowed into a neck, with Pelican Lagoon on one side and Pennington Bay on the other, creating almost a separate island.

Our first stop was to Pennington Bay, just 2 kms off the main road, consisting of a series of beaches that can be reached by sets of stairs from the high parking areas. The scenery of these beaches from our elevated position was breathtaking and we noticed that there was some good surfing waves crashing on the shores at the western end of the beach. 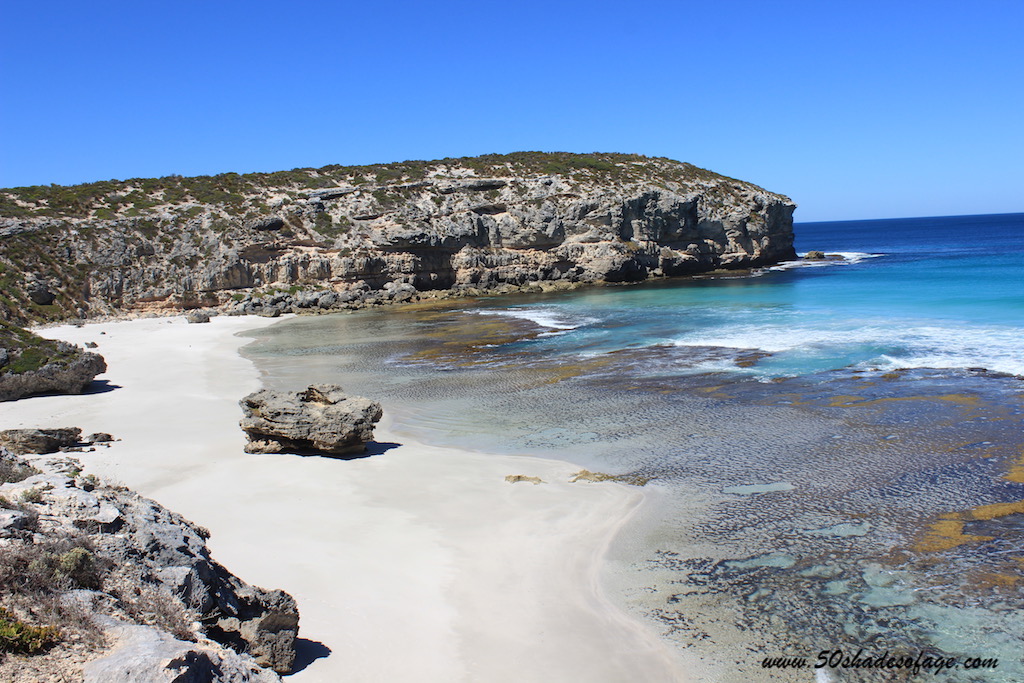 Views over Pennington Bay to the east

Although it’s not advisable we couldn’t help ourselves and quickly stripped off to have a swim in the beautiful turquoise waters and my husband had a great body surf. Fishing can be enjoyed here, but for many the main draw of the bay is surfing. Still, caution should be taken as the waves can be quite rough and large at times. 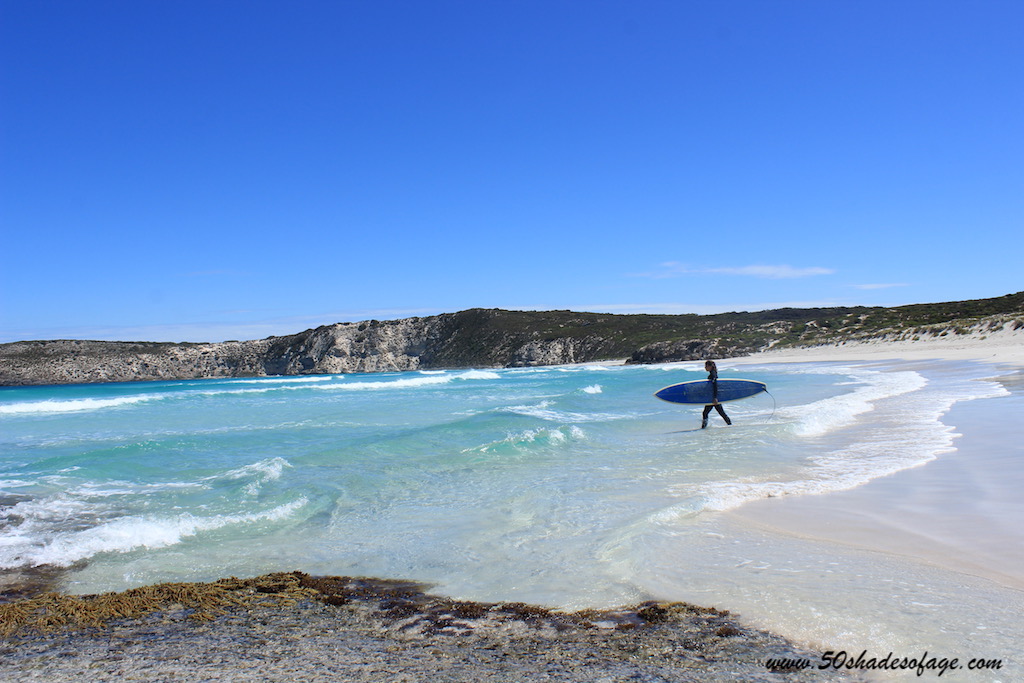 Down on the beautiful beach at Pennington Bay

There is one resort in Pennington Bay, which is actually a two bedroom house that can sleep up to six people. This secluded retreat is a great place for some privacy, while being surrounded by bush land and enjoying views of Pennington Bay. 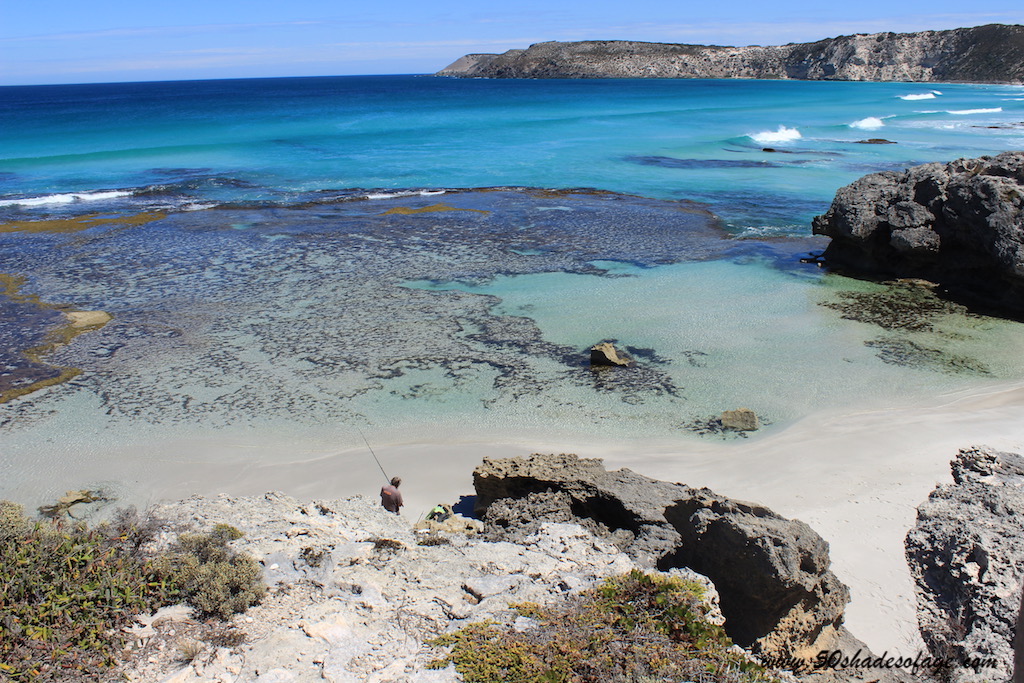 A fisherman tries his luck at Pennington Bay

I guess if Kangaroo Island was to have an upmarket or posh beach suburb, you would have to say that Island Beach is the Bondi Beach of Kangaroo Island. It’s lined with very modern stylish beach homes overlooking a long stretch of white sandy beach and protected cove. 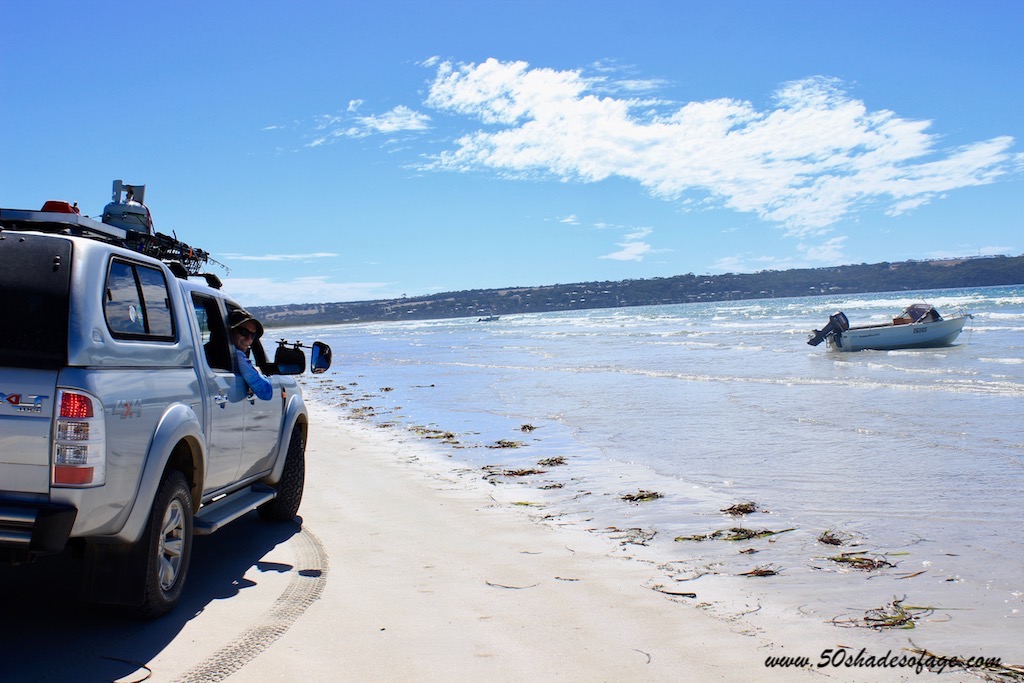 Driving onto the beach at Island Beach

Despite it’s posh label, it is still only accessed via dirt roads and the beach is fringed with dense bushland with heaps of wildlife bounding about. The sandy beach provides safe swimming and can be accessed by car to launch a boat for fishing or boating on the calm waters in the bay. 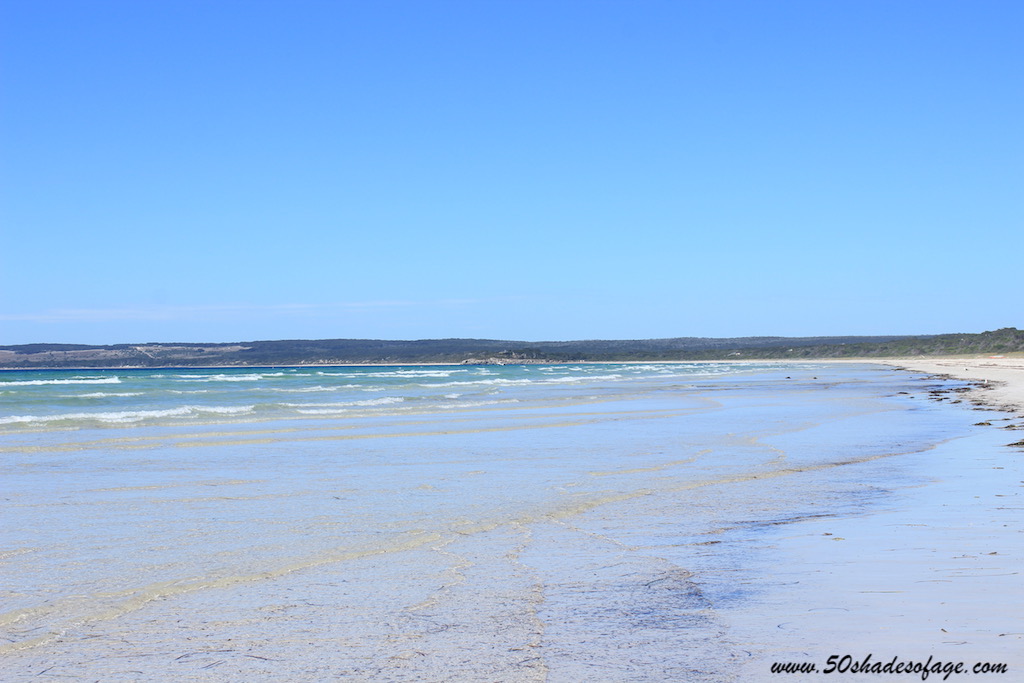 A very inviting beach for swimming

If you drive further west of Island Beach you come to the western end of Dudley Peninsula and a spit known as Strawbridge Point in the locality of Sapphiretown. The north-western extremity is bounded to the north by Eastern Cove in Nepean Bay and by the body of water of American River to the west. 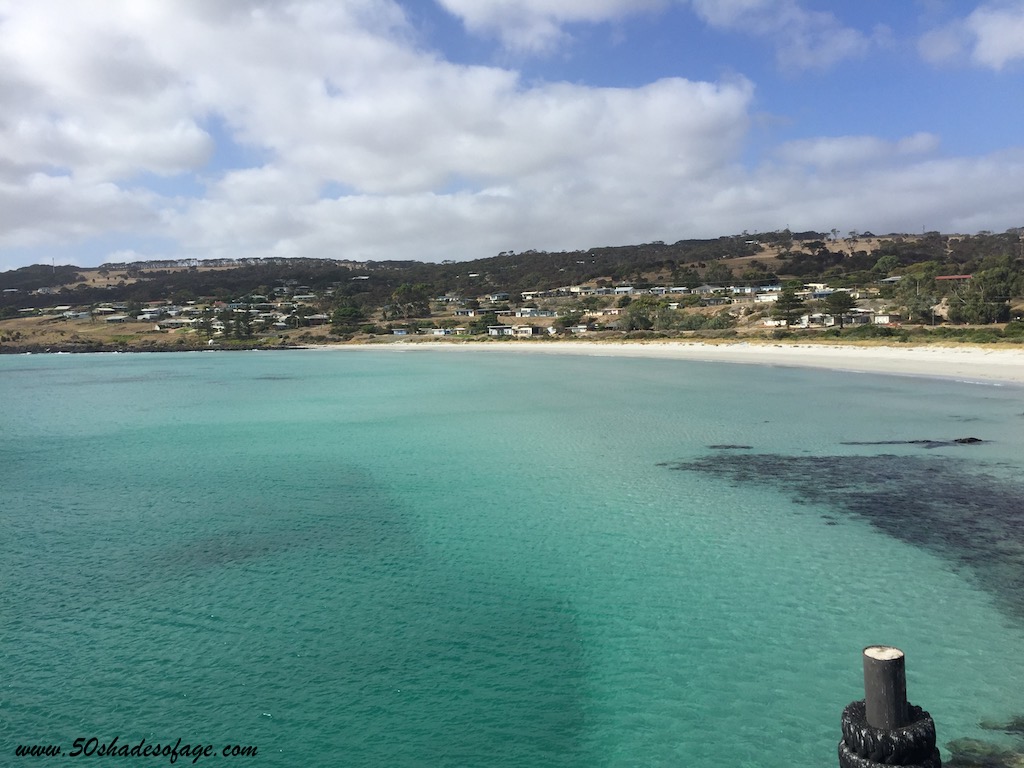 On the morning of our departure from Kangaroo Island back to the mainland, we arrived into the town of Penneshaw early so that we could have a look around. 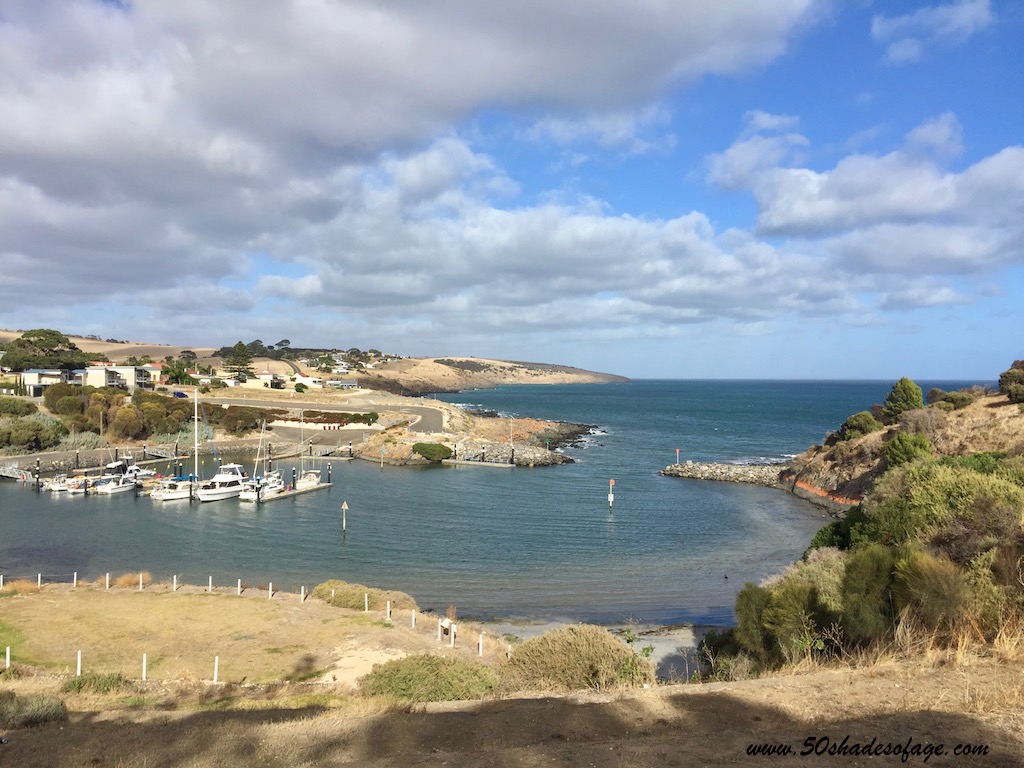 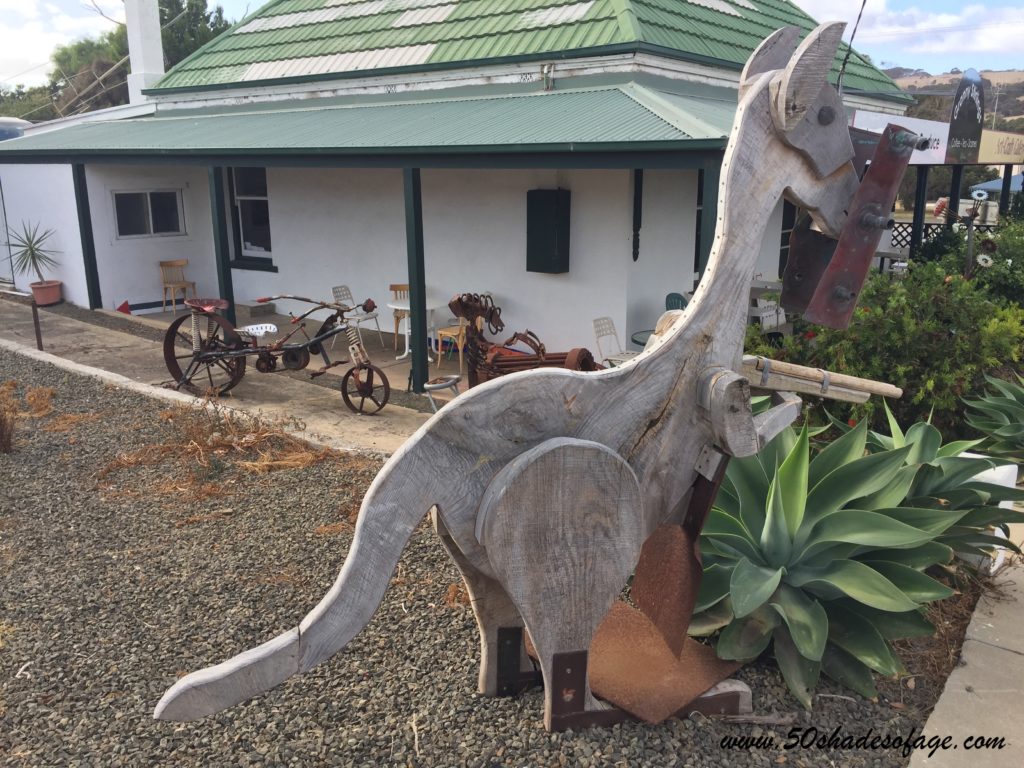 After a quick tour of Penneshaw, that didn’t take too long as the town is tiny, we boarded our ferry to return to the mainland. We were sad to leave this island paradise and what I would now call one of the world’s greatest nature-based destination. Do yourself a favour and put this place on your travel must-see list, before it becomes overrun with tourists, because it has to be seen to be believed.

Spread the love
American RiverCaravan AustraliaDudley PeninsulaKangaroo IslandPenneshawTravel South Australia
By 50 Shades, April 23, 2018 Kathy was a 50 something year old when she started up this blog 6 years ago, but has since turned over another decade and is now in her early 60s. She is married with two adult children and lives on the Tweed Coast of New South Wales, Australia. Kathy enjoys living life to the fullest and loves to keep fit and active by maintaining a healthy diet and exercising regularly. Some of her interests include reading, photography, travelling, cooking and blogging! Kathy works part-time as a freelance writer but her real passion is travelling and photographing brilliant destinations both within Australia and overseas and writing about it.