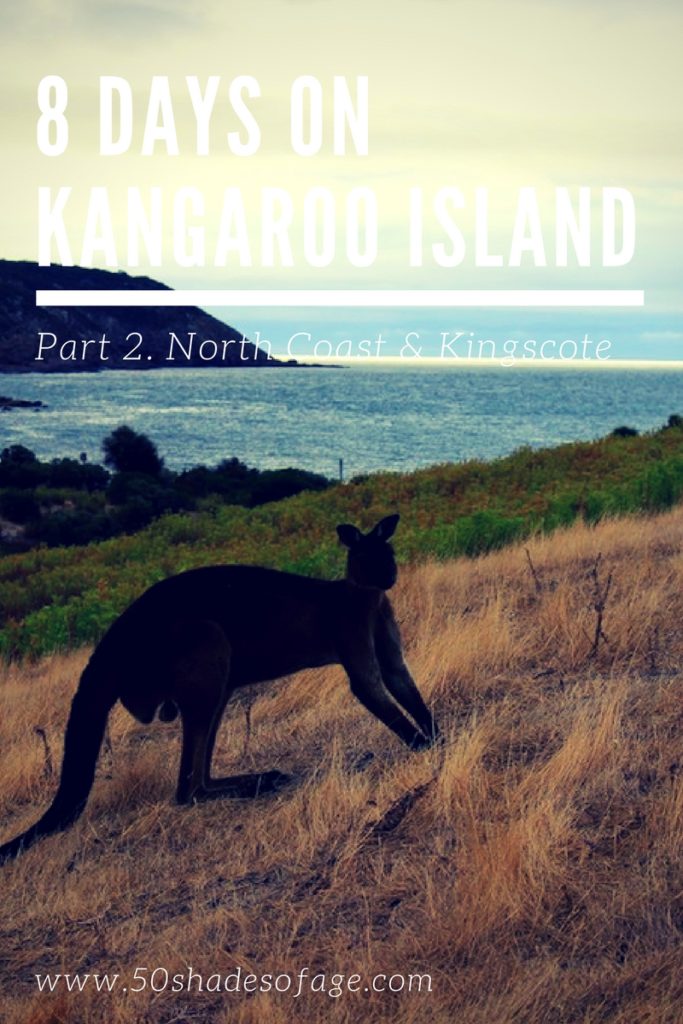 We awoke on our fourth day on Kangaroo Island to sunshine and blue skies, and after speaking with a couple of other travellers, we decided to drive over to the north side of the island to Stokes Bay. It was the perfect day to discover this gorgeous little beach located 24 kms from Parndana. We decided to take a short cut across the centre of the island on an unsealed road through vast farmlands. Our 8 days on Kangaroo Island: part 2 consisted of a day at Stokes Bay and then 2 nights in Kingscote.

Situated adjacent to Lathami Conservation Park in the middle of the north coast of Kangaroo Island, Stokes Bay is nothing more than a small cafe, boat ramp and picnic area. We had heard you could camp at the rear of the cafe for $5 a night each under some nice shady trees and within a short walking distance to the beach. Although there were no showers, there were flushing toilets, picnic tables, drinking water and the cafe. 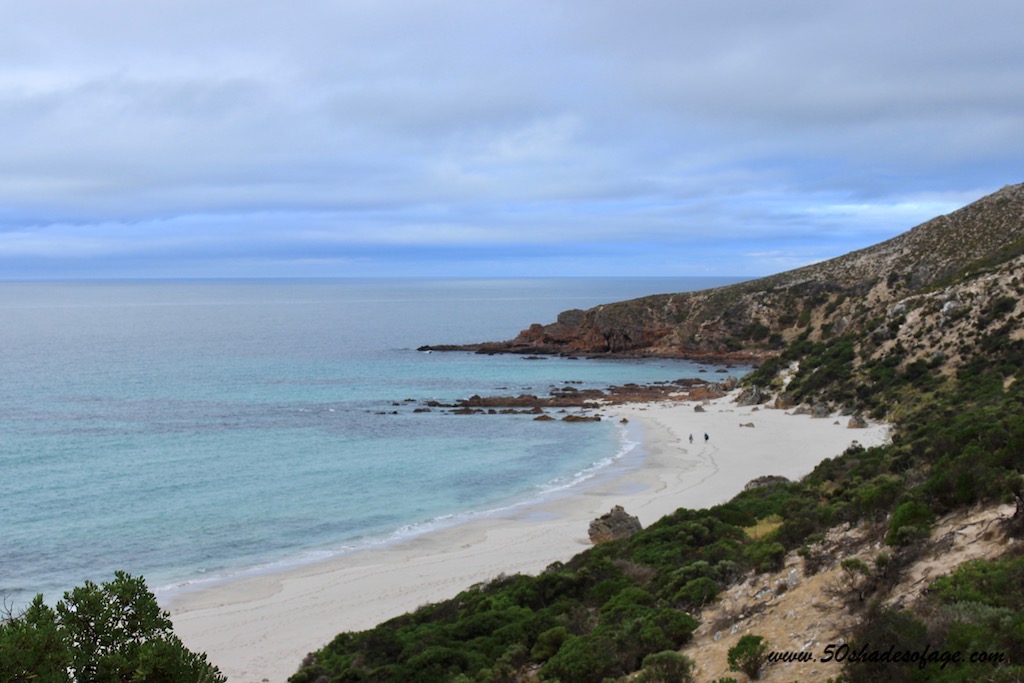 View of Stokes Bay from the headland.

When we arrived the cafe wasn’t yet open so we parked our car and caravan and took the path towards the beach, through the rock tunnel, into a secluded little bay with a rockpool that looked very inviting for a wallow. 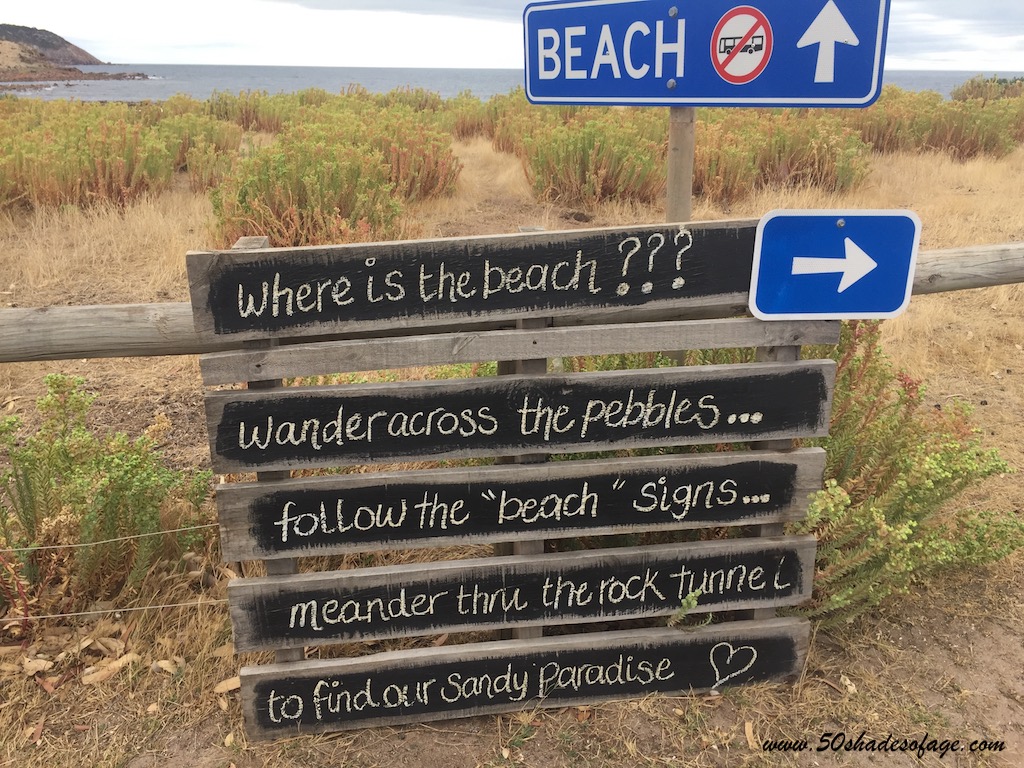 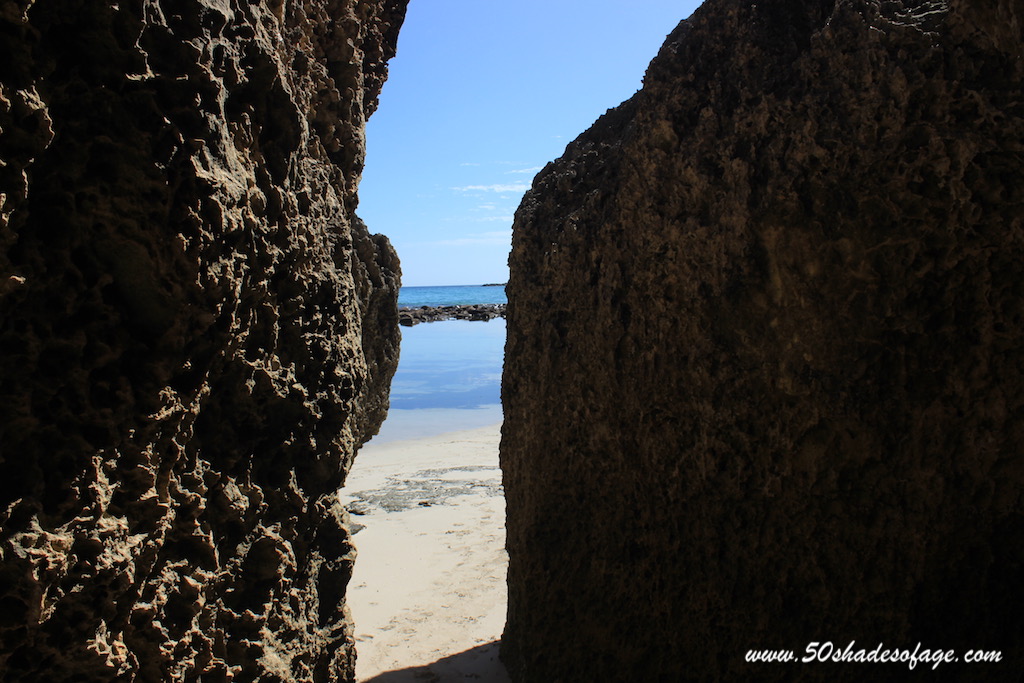 Rock tunnel to the beach at Stokes Bay

Once the Rockpool Cafe opened we had our first real cup of coffee in four days and paid for a night’s camping. We parked our caravan under a shady tree and immediately met our neighbours, a curious little wallaby and a cuddly koala in our tree! 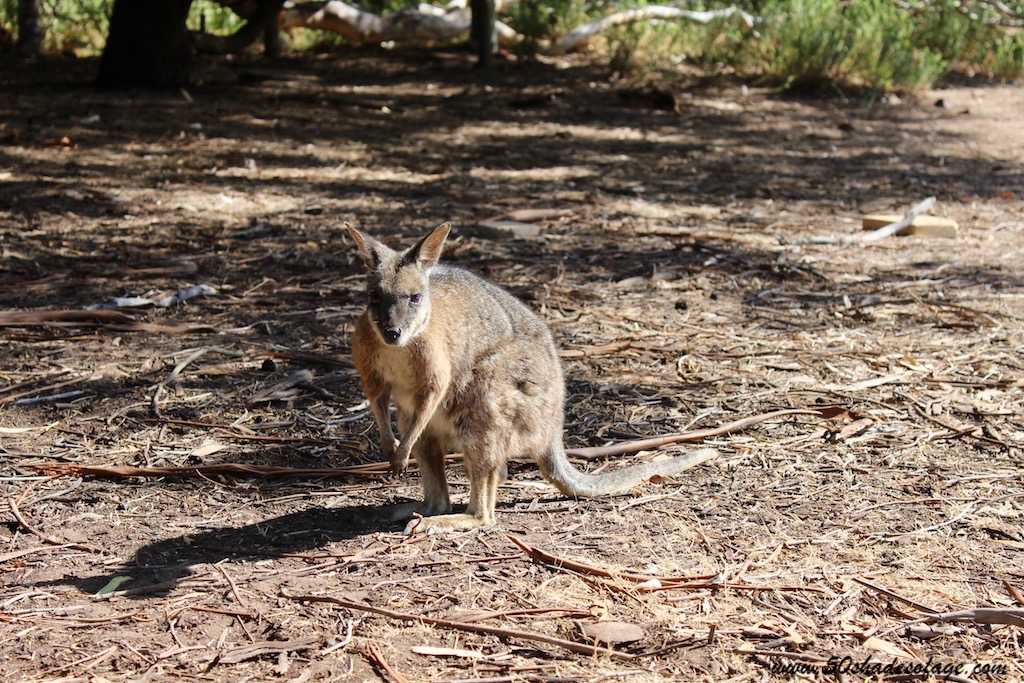 The day was perfect, and we wasted no time in changing into our bathers and heading for the beautiful little beach for a stroll and a swim. We walked as far as we could to the other end of the pretty bay where there were more rock formations and small rock pools. 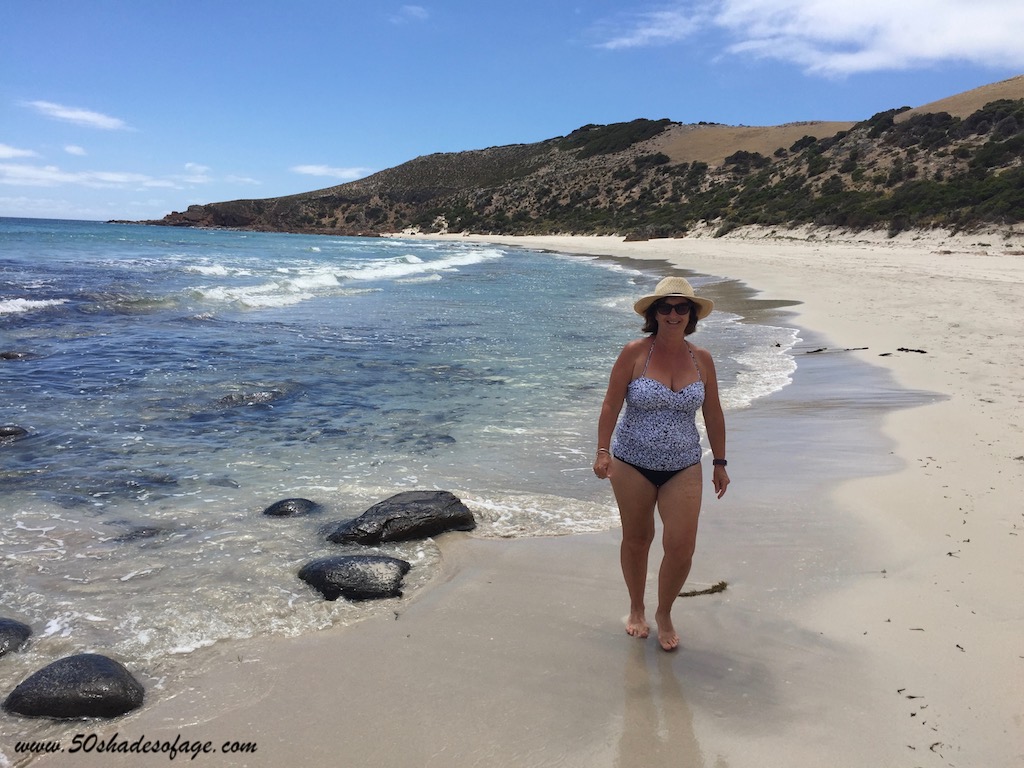 Strolling along the beach at Stokes Bay 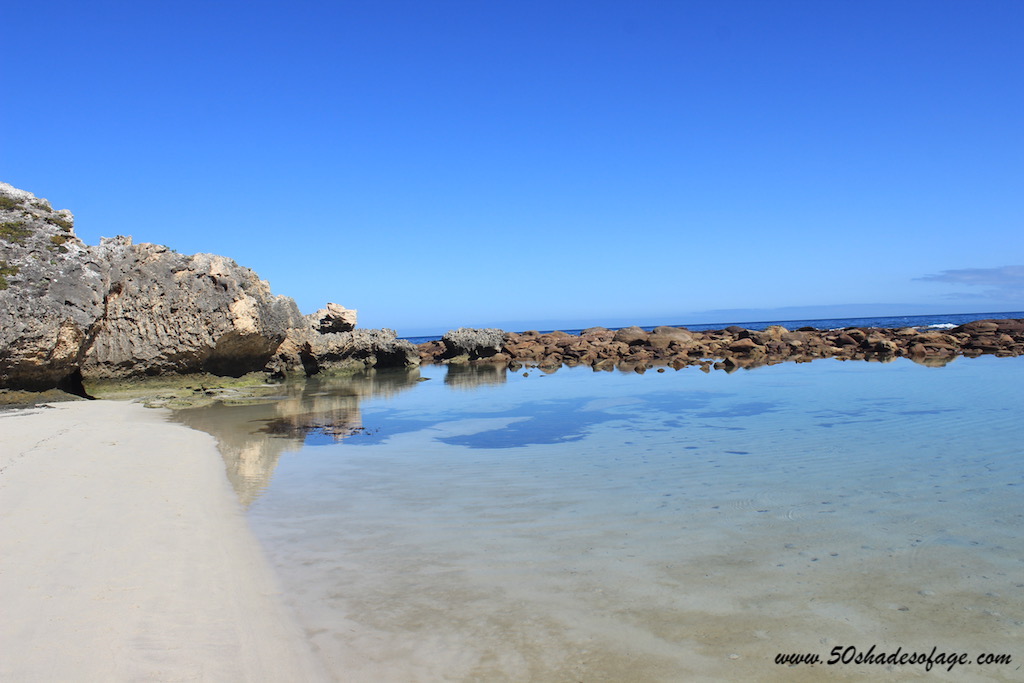 The Rockpool at Stokes Bay

Later that afternoon I decided to trek up to the headland to take some photos as the sun was beginning to dip in the sky and was amongst hundreds of kangaroos grazing on the long grass on the hillside. Once the sun set we noticed the kangaroos leapt through our campsite on their way to an adjacent grassy paddock on the other side of the bay. We’ve never seen so many roos! 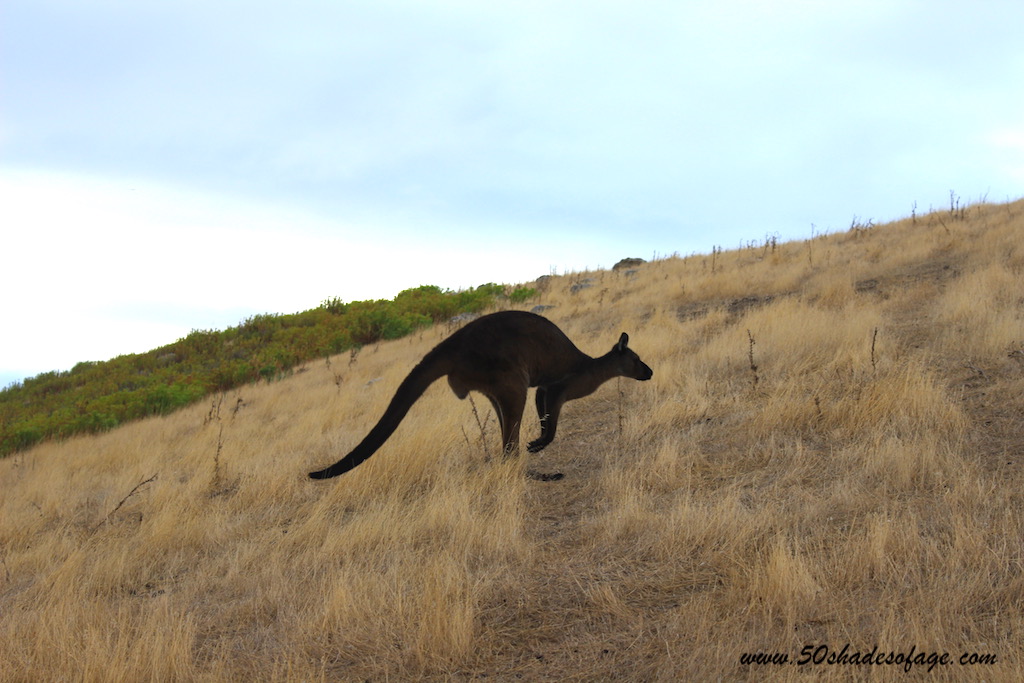 One of the hundreds of Kangaroos at Stokes Bay

Another beautiful beach, east of Stokes Bay, is Emu Bay. This 4 km, white-as-snow sandy beach is surrounded by sand dunes and you’re able to drive your 4WD right onto the sand. 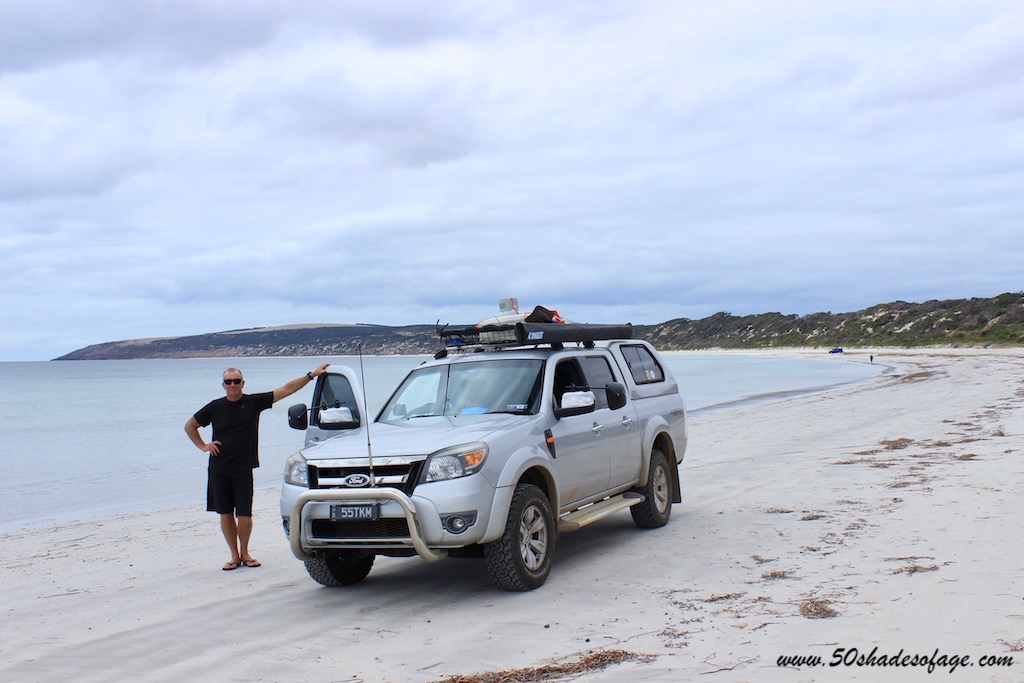 There is a picnic area and children’s playground located right near the beach with public toilets. On the western end of the beach is a boat ramp and long jetty, that is ideal for casting a line. 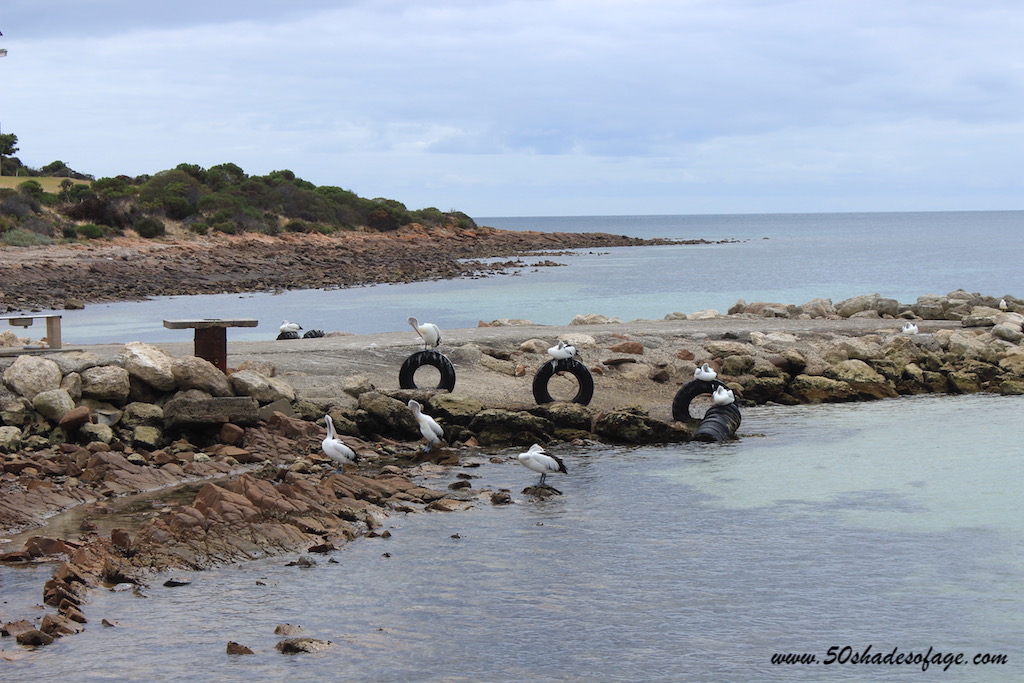 Pelicans near the Jetty at Emu Bay

After spending an hour exploring the small township of Emu Bay, we drove back towards Kingscote stopping at the Emu Bay Lavender Farm. Here we wandered through the rows of flowering lavender plants, visited the cafe where we tasted a lavender icecream and browsed the gift shop. 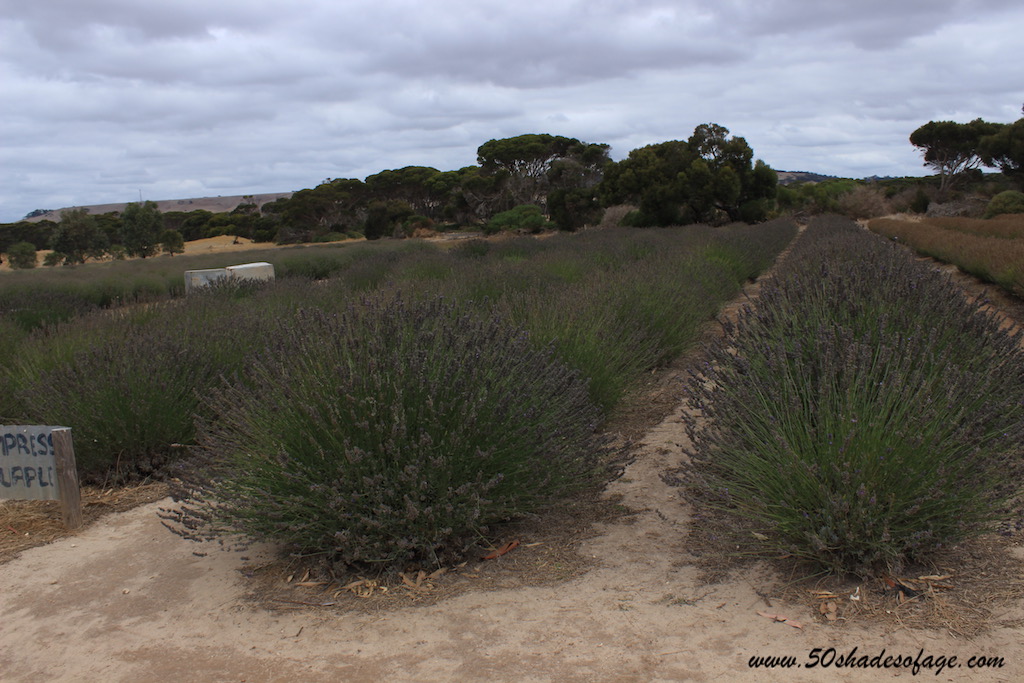 The next day we headed to Kingscote and the comfort of a caravan park at nearby Brownlow. We found the caravan park to be a blast from the past, with very old amenity blocks, but good large, shady and grassed caravan sites. The caravan park was also located adjacent to the beach at Brownlow, with a walking/cycling track that followed the coastline along into the town of Kingscote.

Views over Nepean Bay at Kingscote

Kingscote is regarded as Kangaroo Island’s commercial hub and has a good number and range of shops, a couple of pubs, restaurants and cafes, swimming pool, bowling club, fortnightly markets and a large jetty. It’s located on Nepean Bay and overlooks a harbour with yachts and fishing boats. 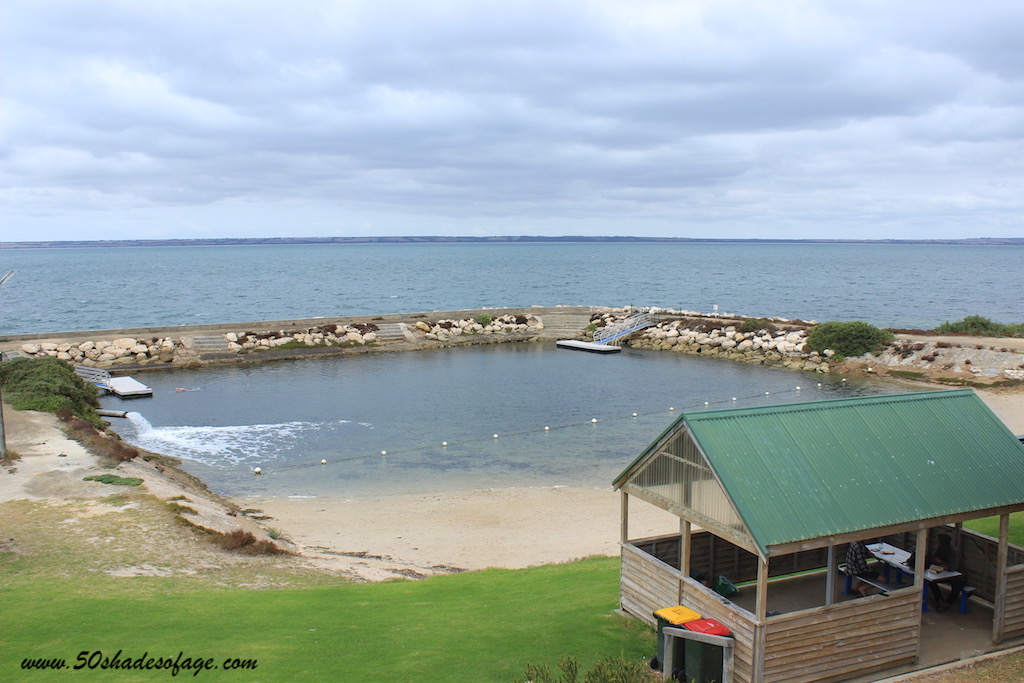 On our first day we drove around to Reeves Point Historic Site, where the first settlement in South Australia was established. The Mulberry Tree, Flagstaff Lookout and Pioneer Cemetery are all located at Reeves Point along with numerous historic points of interest. 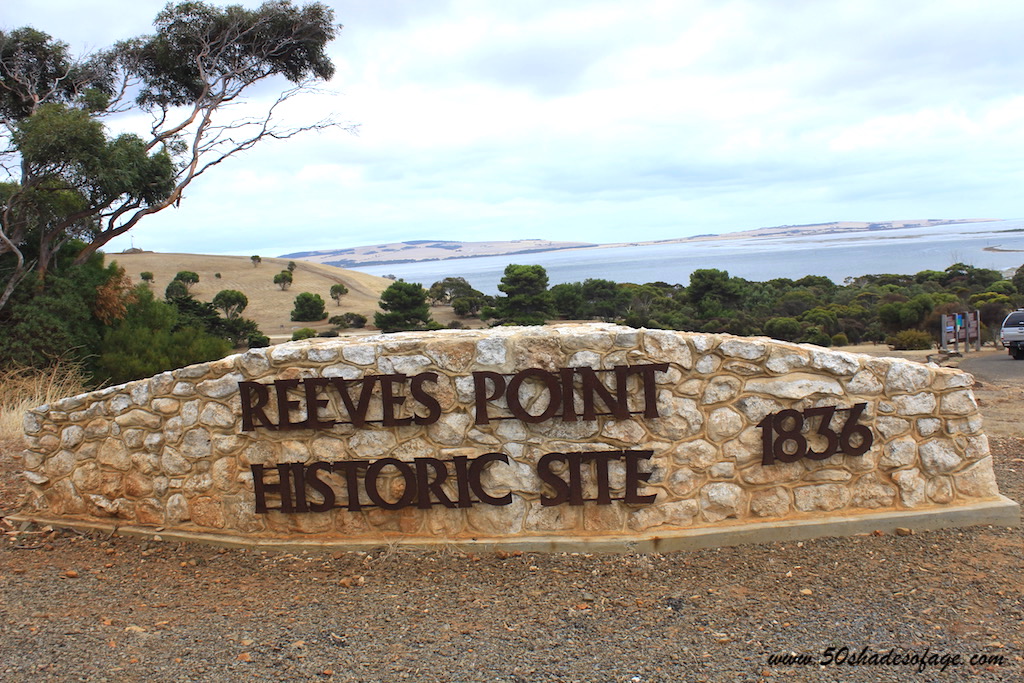 That night we treated ourselves a dinner of local fresh King George Whiting at the Ozone Hotel, situated opposite the jetty in Kingscote. Delicious!

Attractions in and around Kingscote include:

Other things to do are visiting the Bay of Shoals Winery, Kangaroo Island Ciders, Emu Ridge Eucalyptus Distillery, Kangaroo Island Gallery and Pelican feeding near the jetty. Kingscote it very much a foodie’s paradise with heaps of locally grown and freshly caught food to enjoy.

Kangaroo Island was continuing to deliver on all levels with beautiful beaches, friendly wildlife, interesting history, a wide array of fresh produce to select from and wineries, breweries, distilleries – need I go on!!! Next time we are visiting American River and the Dudley Peninsula.

Spread the love
Emu BayKangaroo IslandKingscoteStokes BayTravel South Australia
By 50 Shades, April 16, 2018 Kathy was a 50 something year old when she started up this blog 6 years ago, but has since turned over another decade and is now in her early 60s. She is married with two adult children and lives on the Tweed Coast of New South Wales, Australia. Kathy enjoys living life to the fullest and loves to keep fit and active by maintaining a healthy diet and exercising regularly. Some of her interests include reading, photography, travelling, cooking and blogging! Kathy works part-time as a freelance writer but her real passion is travelling and photographing brilliant destinations both within Australia and overseas and writing about it.