Lake Como to St Moritz in a Day 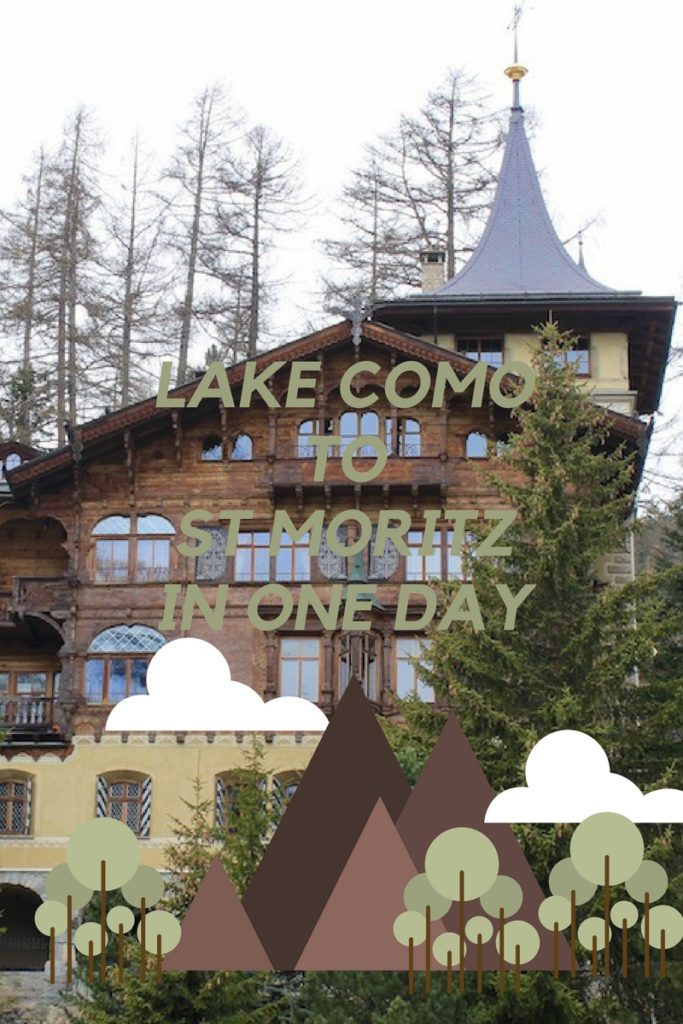 Living on an island continent like Australia and being so isolated from so many countries is one of the downsides of being so remote. If you live in a continent like Europe it is common to be bordered by several other countries, so you can easily hop from one country to another in the matter of a day. During our stay in Northern Italy we were able to drive from Lake Como to St Moritz in a day high into The Alps of Switzerland. Easy peasy!

Our day started off with a hearty breakfast at our hotel and then we set off north of Lake Como. We caught our last glimpse of the lake at Bellano and then snaked our way up the mountain towards the autostrade. 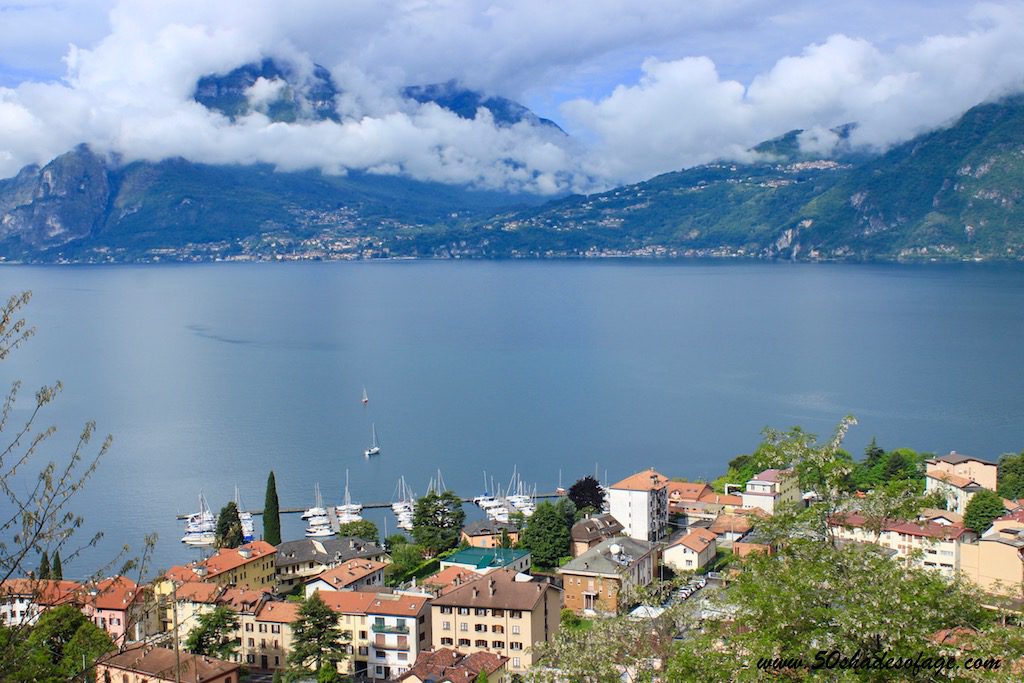 Once we got on the autostrade it was an easy half hours drive to Chiavenna, lying at the foot of Maloja Pass, connecting Italy with Switzerland, Germany and beyond. 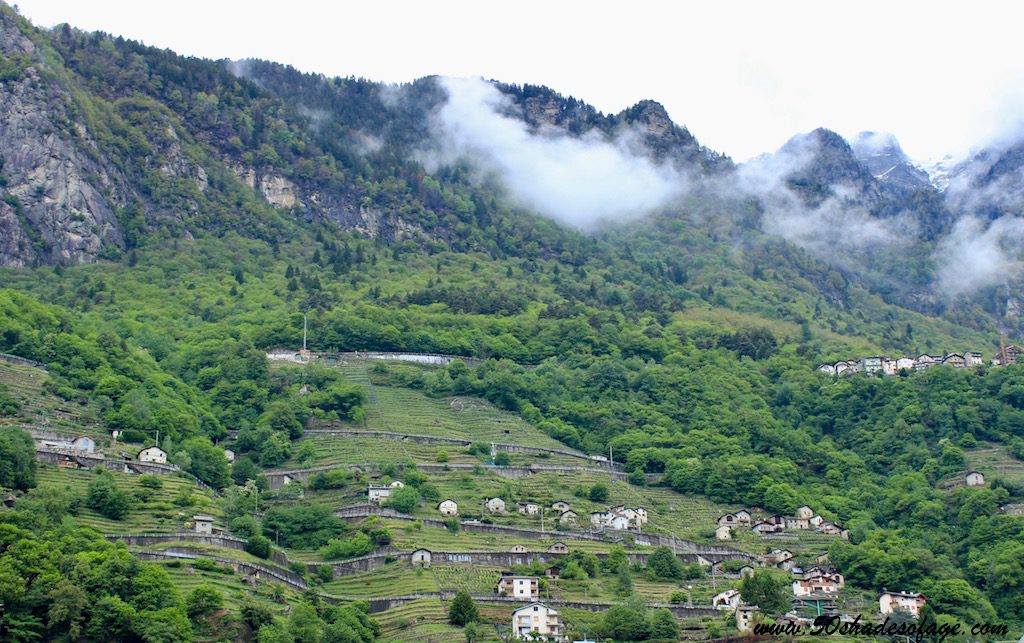 We stopped at this pretty town called Chiavenna, located on the river Mera, for coffee and to take a couple of photos. The bridge over the river Mera afforded us the most stunning views along the river murmuring among the rocks. The word picture-postcard definitely came to mind. 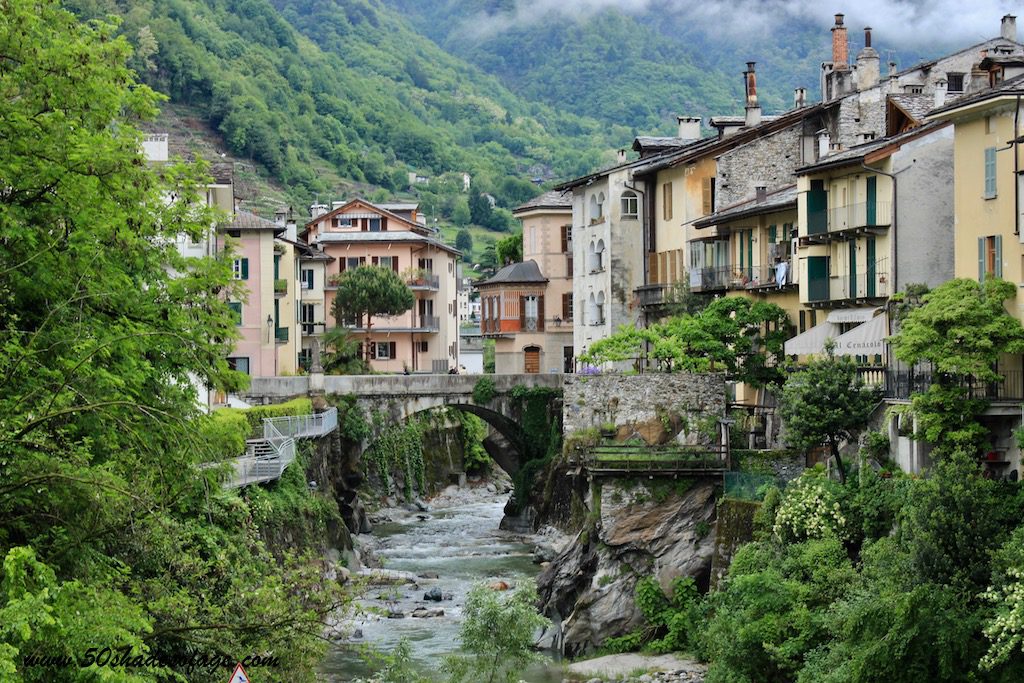 When we returned to our car we discovered that a very inconsiderate driver had parked so close to our car, we were unable to open our doors to get back into it! After a bit of a kerfuffle and a lot of rude hand gestures from both parties, we were back underway through the picturesque countryside across the border into Switzerland.

Chiavenna to the Swiss Border

We drove through the Valchiavenna through ancient stone house villages, like Prosto and Ponteggia, through green pastures of dairy farms with herds of brown cows grazing and terraces carved into the mountains covered in vineyards. We stopped to photograph a waterfall cascading down one of the mountainsides. 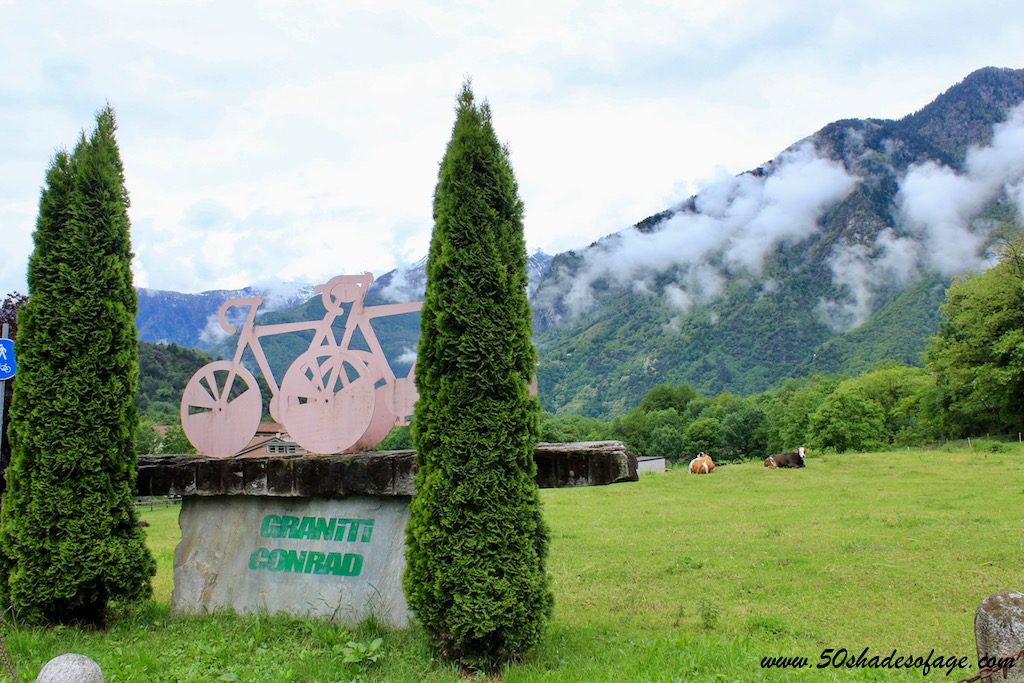 Some of the Farmland in Valchiavenna

Once we reached the Italy/Swiss border we drove straight through the toll booth into Switzerland without a hitch. We had heard we would need our passports to cross the border but we were just waved through. Our drive entailed a fairly lengthy climb up into The Alps with countless switchbacks. The Maloja Pass took us through some extraordinary countryside and it wasn’t long before we were surrounded by snow capped mountains on all sides. 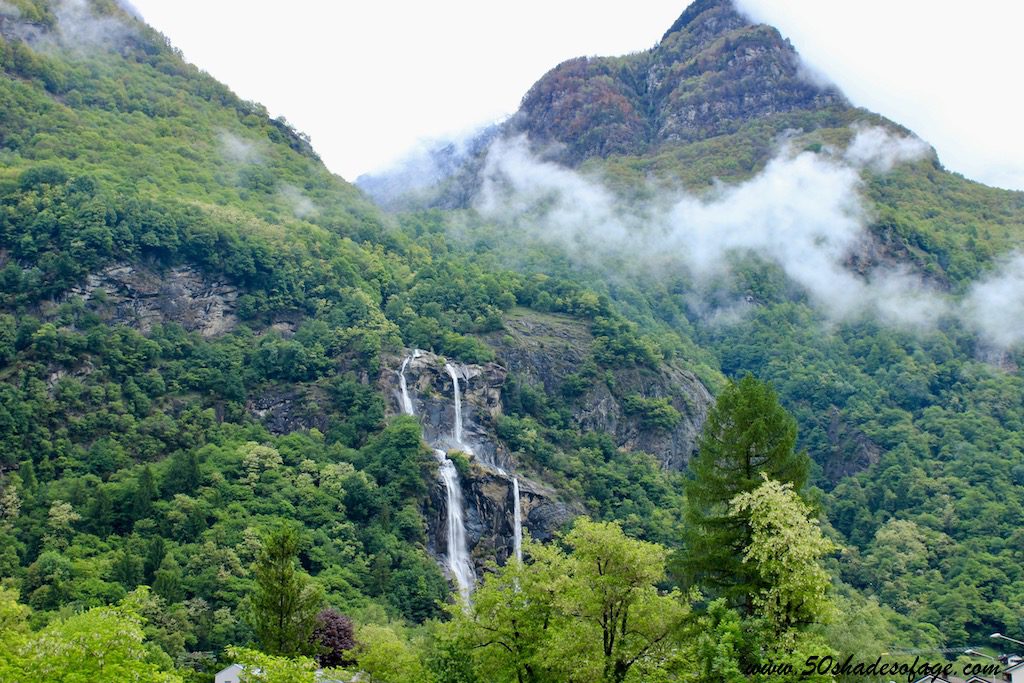 Waterfall in the Majola Pass

After about one hour driving through breathtaking countryside we arrived at a large lake in the town of Silvaplana. It is described as being a lively, trend-setting holiday resort set amongst the lakes of the Engadin. During summer Silvaplana is a magnet for outdoor activity fans, but it is also a paradise for snowkiting during the winter months. 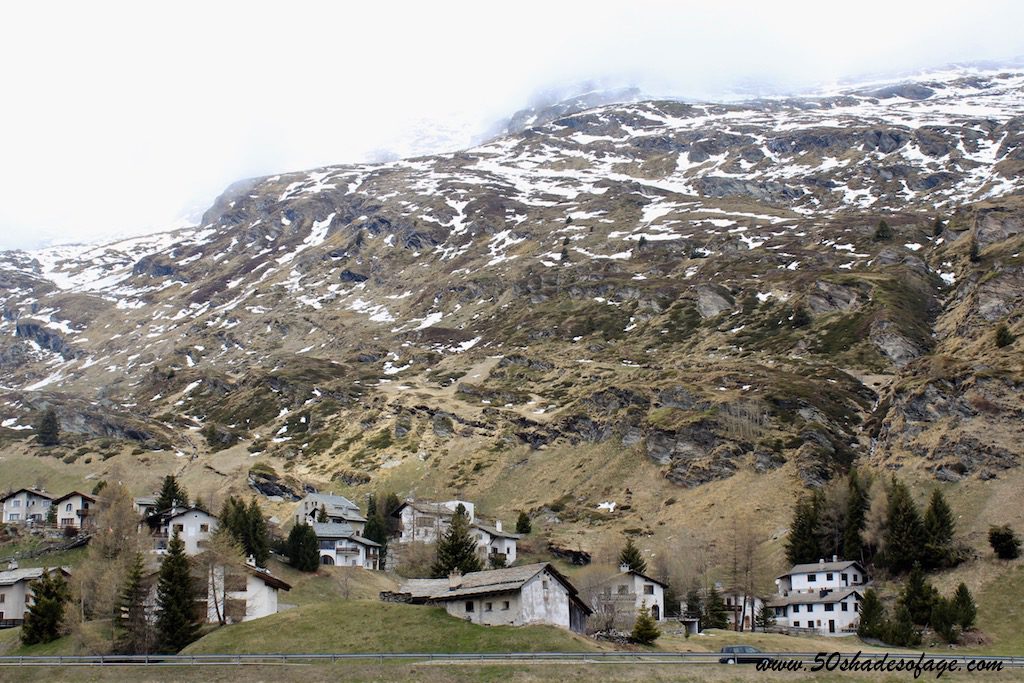 We stopped to take in the serenity and beauty of the lakes. There was still a lot of snow on the mountains surrounding the lake, even though it was May when we were here. It was very peaceful and quiet around the town, so maybe a little early for the summer holidaymakers. 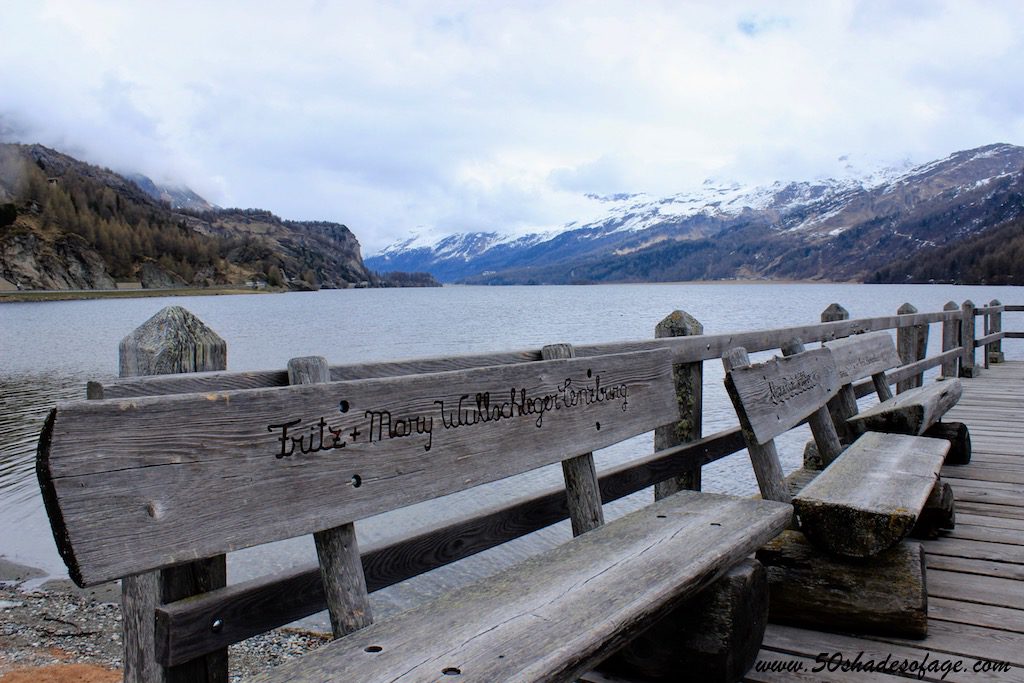 We arrived at one of the world’s most famous ski resorts, St Moritz, and immediately wondered where all the people were. The place was deserted apart from the odd person walking around the town. 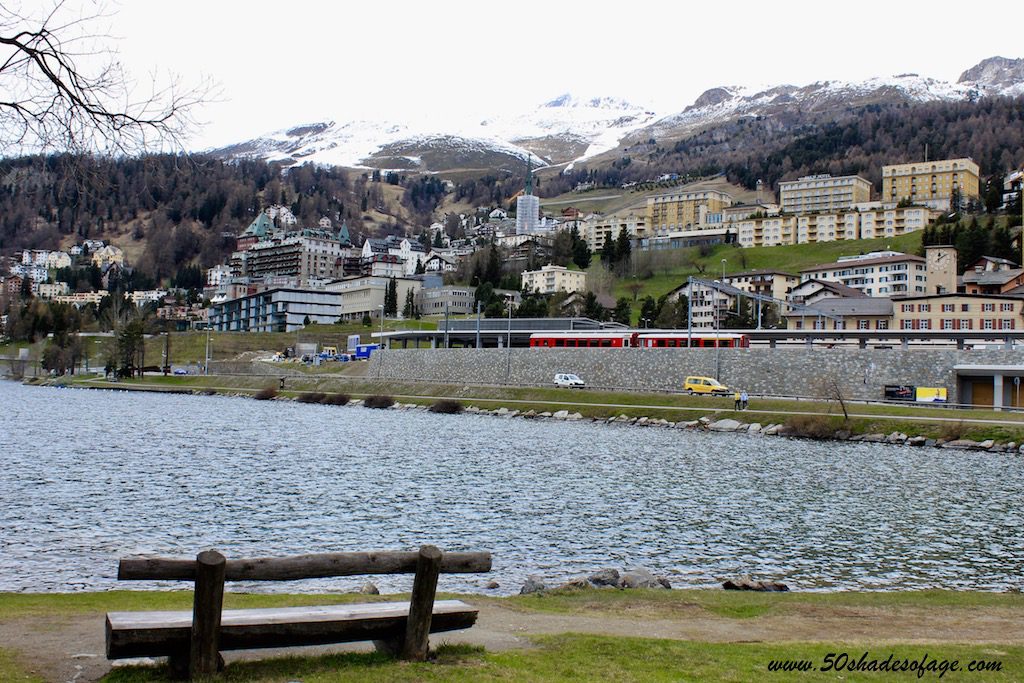 The Alpine resort town located in Engadin in Switzerland, has hosted the Olympic Games twice and its ski and snowboard areas include Corviglia, Diavolezza and Corvatsch. Its frozen lake hosts polo, cricket and even horse racing on ice. However, the day we visited the ice had long gone on the lake and the ski slopes were closed. 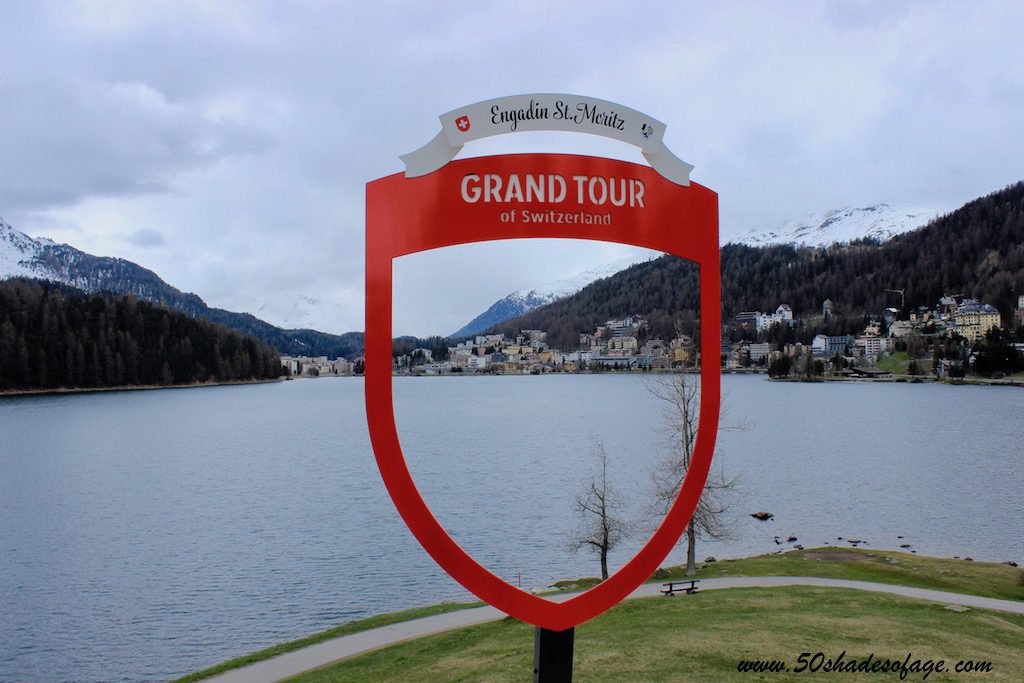 We took a quick stroll around Lake St Moritz, checking out St Charles church and the 33-metre-high leaning tower. Perched on the mountainside there are many grand hotels, such as the Badrutt’s Palace Hotel and the Kulm Hotel. 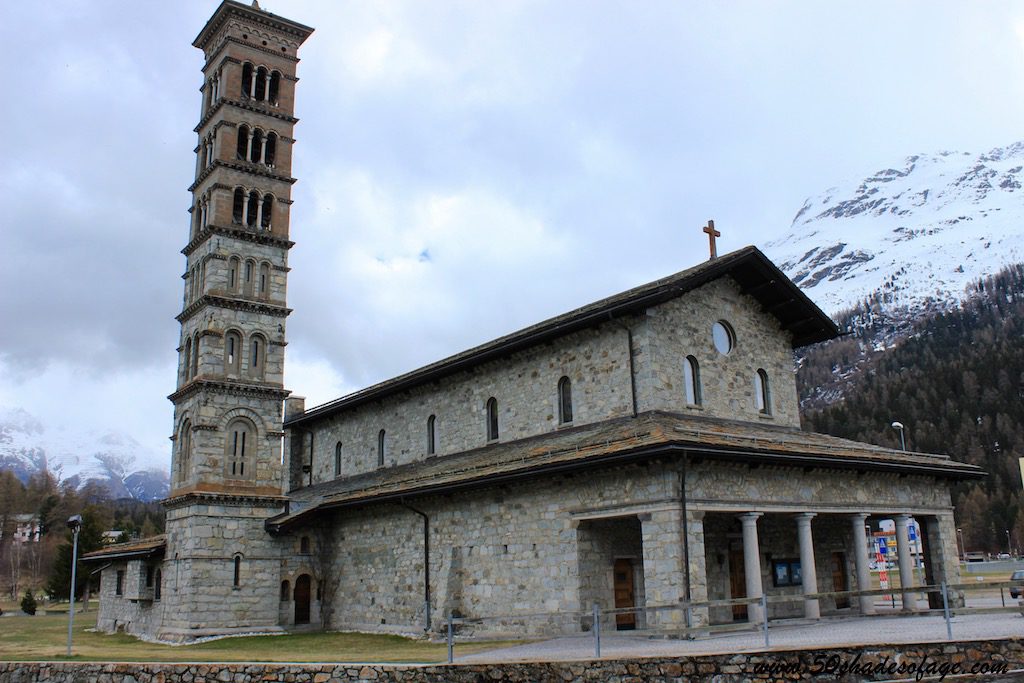 The Leaning Tower of St Moritz and St Charles Church

We eventually found a place to have lunch in the town, as most places seemingly had closed down after the winter ski season had lapsed. Bellies full, we headed towards Bernina Pass, the world’s highest pass through The Swiss Alps. 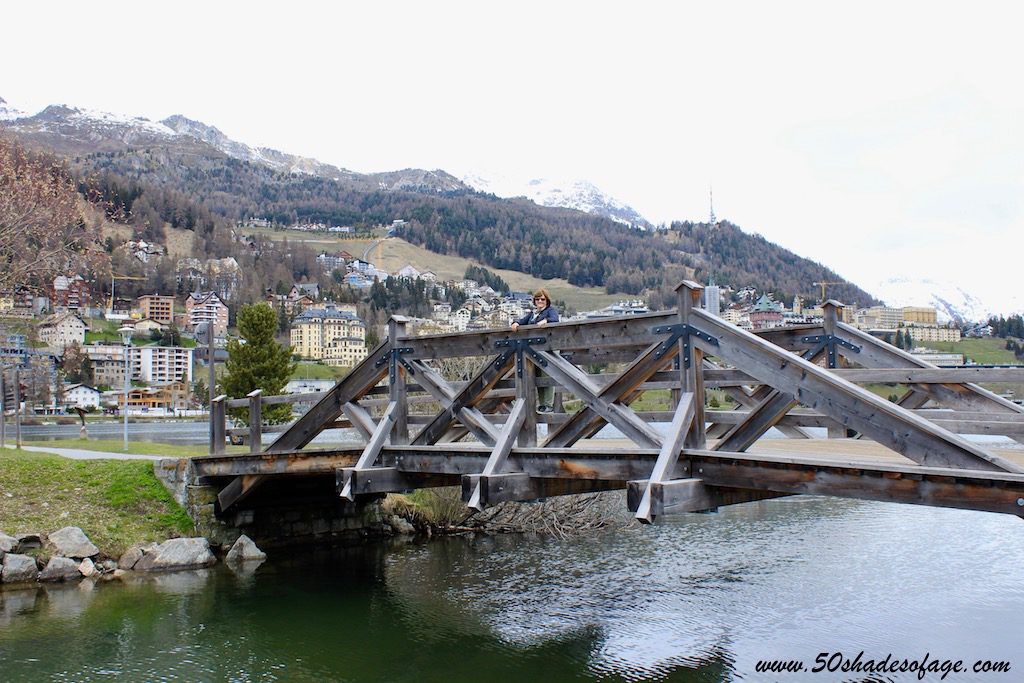 The winding highway of the Bernina Pass winds through 2,328 metre mountain peaks and apparently can be lined with snow as late as June. We immediately noticed a drop in the outside air temperature to 2 degrees C and were astonished as to how much snow was alongside the road and covering the peaks surrounding us. 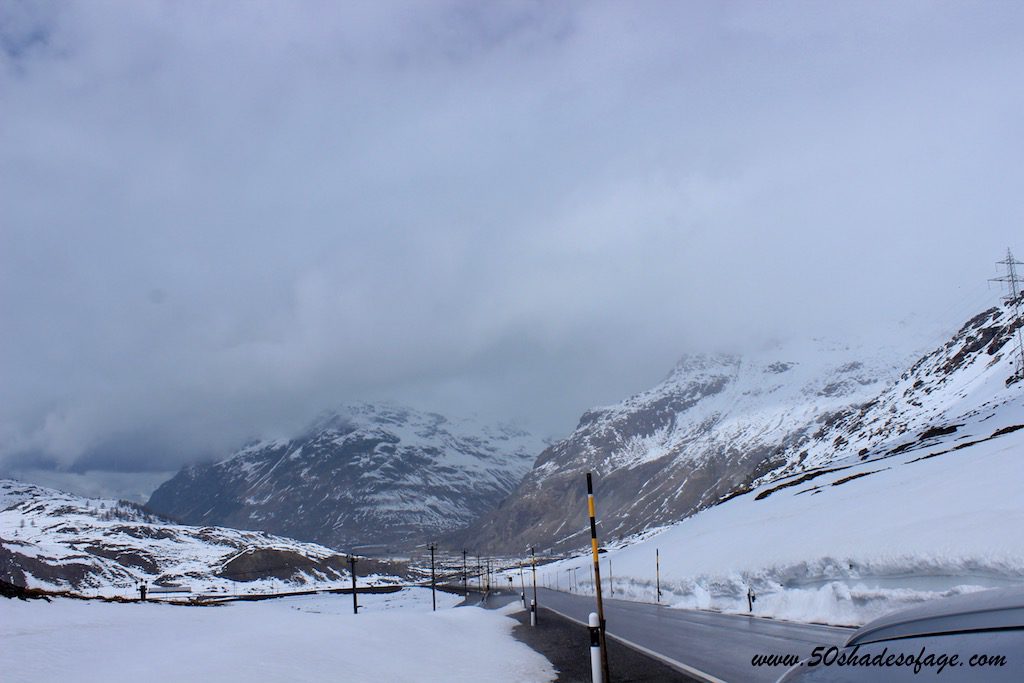 There are aerial tram cable cars that rise to the mountain peaks all year at the Diavolezza Nordic Park where skiing is a short train ride from St. Moritz on the tracks of the Rhaetian rail line. 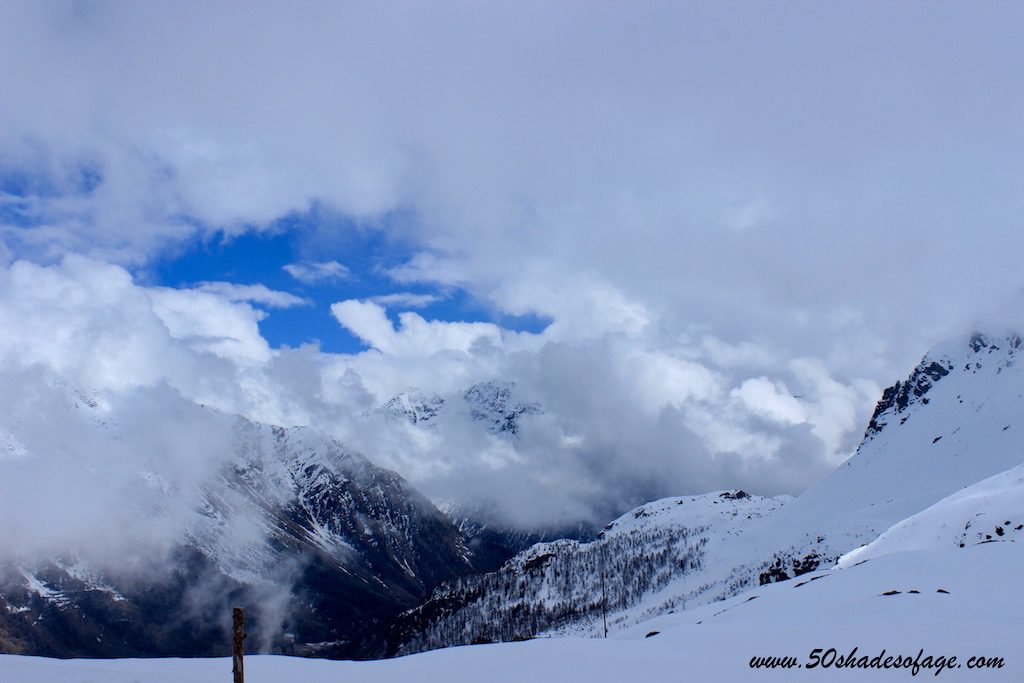 I could see why the Bernina Pass between Switzerland and Italy is regarded as one of the most beautiful routes in Europe. As we started to descend down from the mountains, we were then rewarded with verdant green valleys, mountain streams, little villages with A-frame roofed houses and some of the freshest air I have ever inhaled. 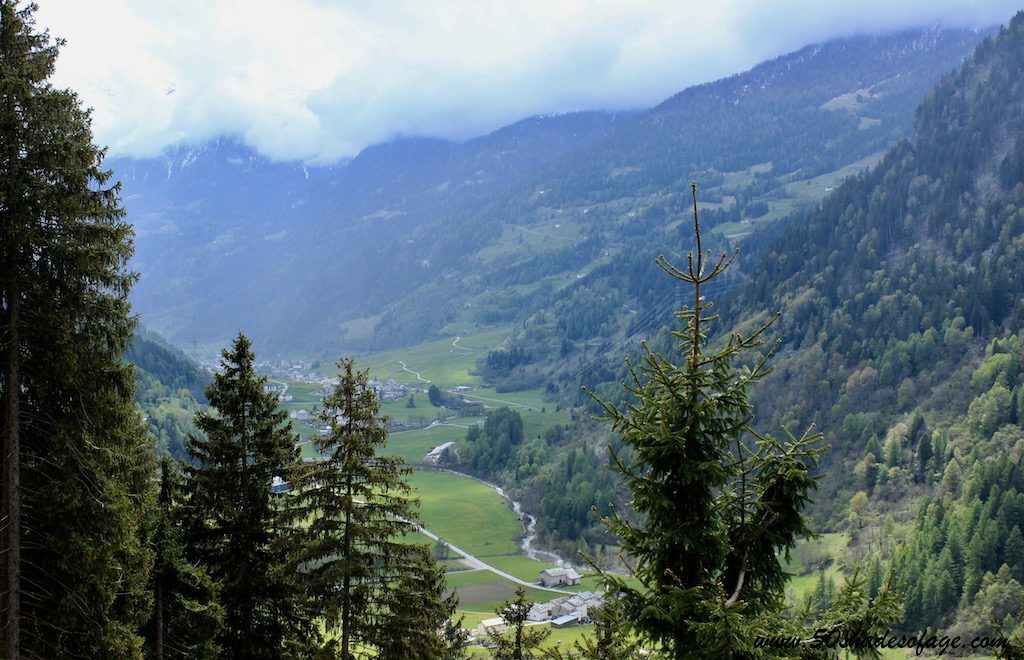 Now if you don’t have a car and would like to see the stunning Swiss Alpine region, then there is a tourist train called the Bernina Express that departs from Tirano, Italy and ends at charming Chur in Switzerland. 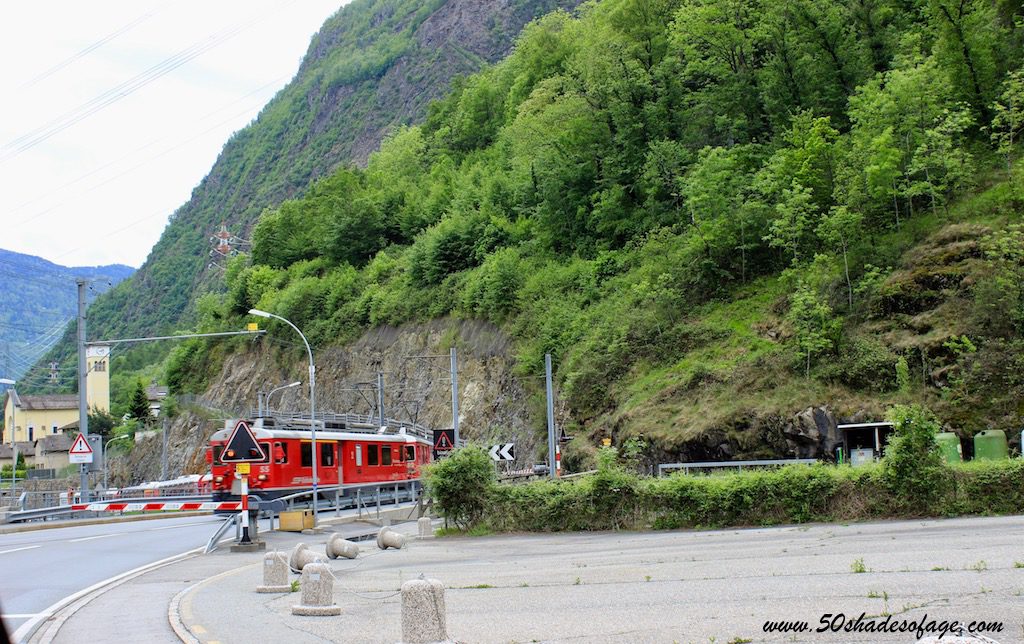 The Bernina Express at Tirano 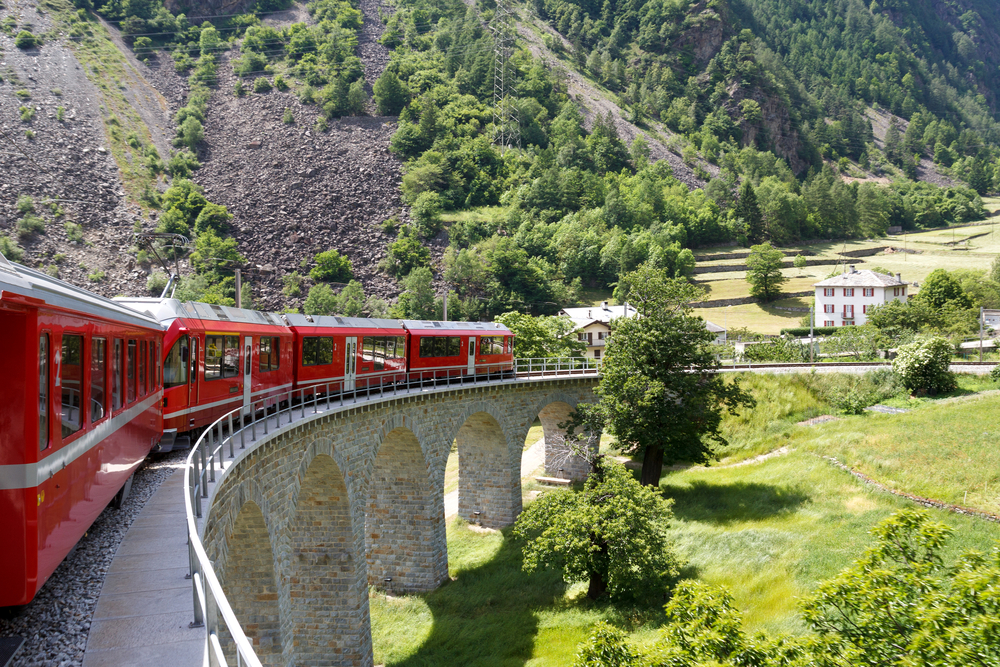 Bernina Express train travelling over a viaduct in the Swiss countryside

From Lake Como you can organise a private transfer, catch a train or bus tour to Tirano (about 1 hour and 45 minutes driving), where you can jump aboard the Bernina Express train.

We made it back over the border into Italy and the town of Tirano. As we drove through this beautiful town and crossed the Adda River, we noticed the Bernina Express train was just leaving the station. 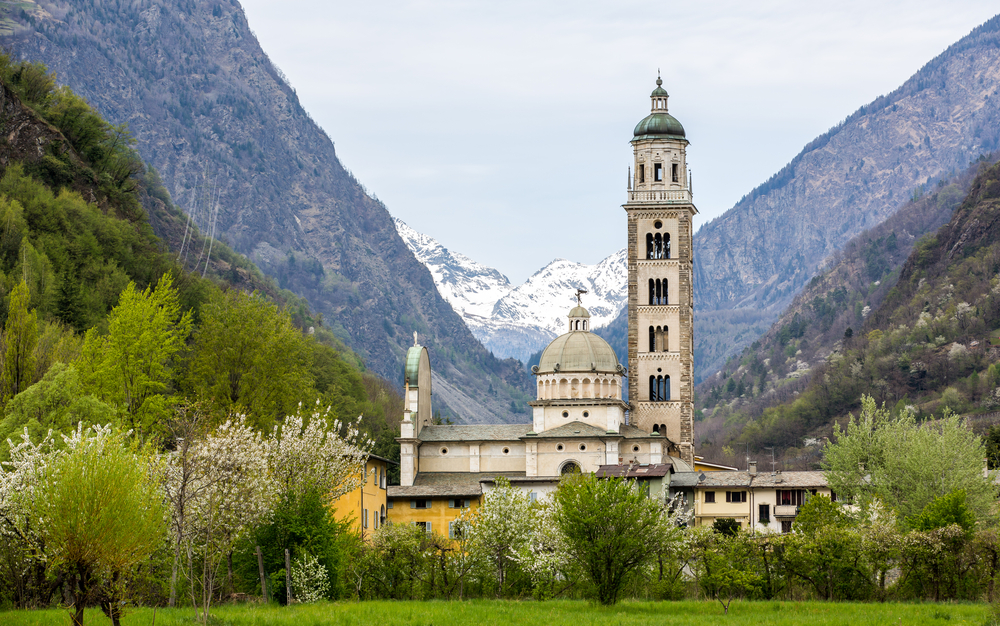 The Duomo in Tirano, Italy

The drive back to Varenna, of about 96 kilometres, took in the picturesque Valtellina Valley, via the little town of Morbegno, following the left side of the Adda river. It wasn’t long before we caught sight of the northern arm of Lake Como and were back in Varenna. 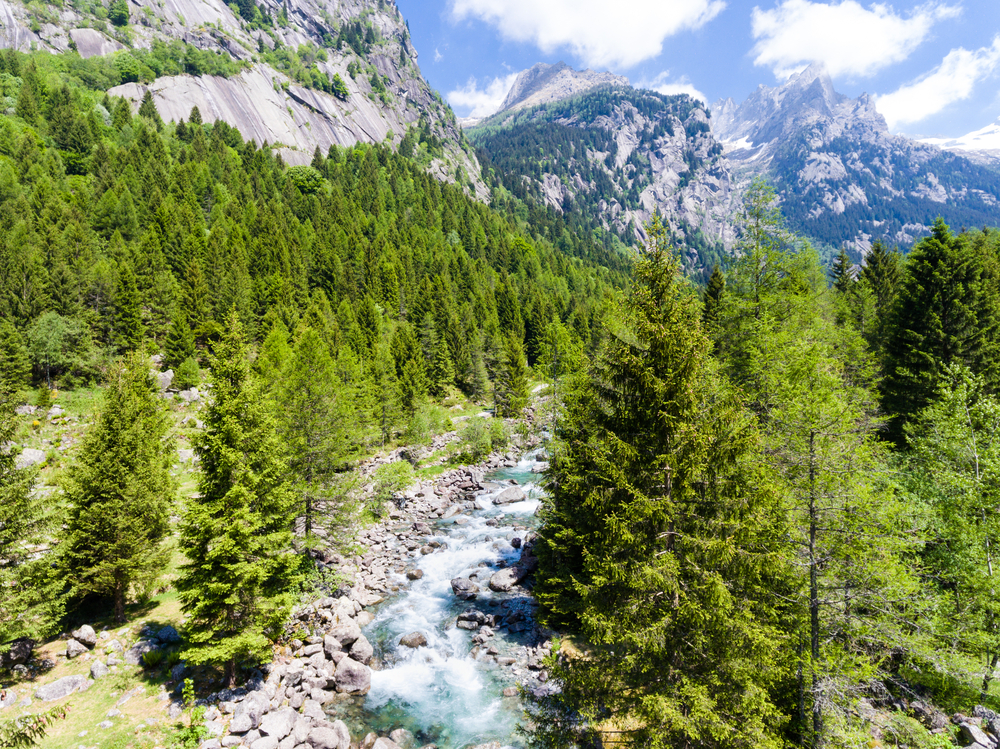 The Valtellina Valley in Northern Italy

What an experience this day was! When I came to Italy I never imagined that I would also be venturing into the Swiss Alps. I certainly got my intake of fresh mountain air, and to see the upmarket ski resort town of St Moritz was a big thrill. It almost made me feel like yodelling from the hilltops!

Spread the love
Bernina ExpressBernina PassChiavennaItalian HolidayLake Como Day TripSt MoritzSwiss AlpsSwitzerlandTarino
By 50 Shades, August 28, 2017 Kathy was a 50 something year old when she started up this blog 6 years ago, but has since turned over another decade and is now in her early 60s. She is married with two adult children and lives on the Tweed Coast of New South Wales, Australia. Kathy enjoys living life to the fullest and loves to keep fit and active by maintaining a healthy diet and exercising regularly. Some of her interests include reading, photography, travelling, cooking and blogging! Kathy works part-time as a freelance writer but her real passion is travelling and photographing brilliant destinations both within Australia and overseas and writing about it.