Hoi An Old Town and An Bang Beach 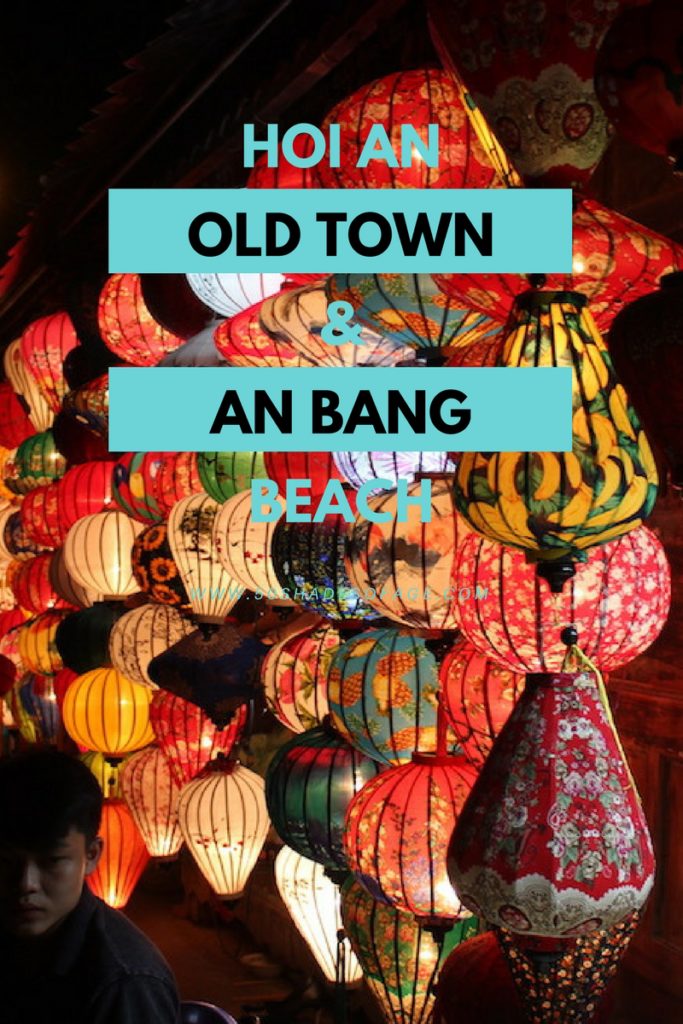 Out of all of the South East Asian cities or towns that I have visited, there is nowhere prettier than Hoi An Old Town and An Bang Beach. Although the town and beach are a mere 6 kilometres away from each other, if you stay at one or the other you get the best of both worlds – a beautiful stretch of white sandy beach and a world heritage-listed ancient town that exudes charm and grace.

So this post is not about telling you about Hoi An’s geography or history, but about showing you some pretty pictures of this coastal town, located in Central Vietnam on the South China Sea.

Strolling around Hoi An Old Town is an absolute delight. The streets are blocked off to cars and motorbikes, but you do need to watch out for cyclists and rickshaws. There are striking bougainvillea vines draped off historical buildings and ferny leafed trees that provide a little shade as you walk along the streets. 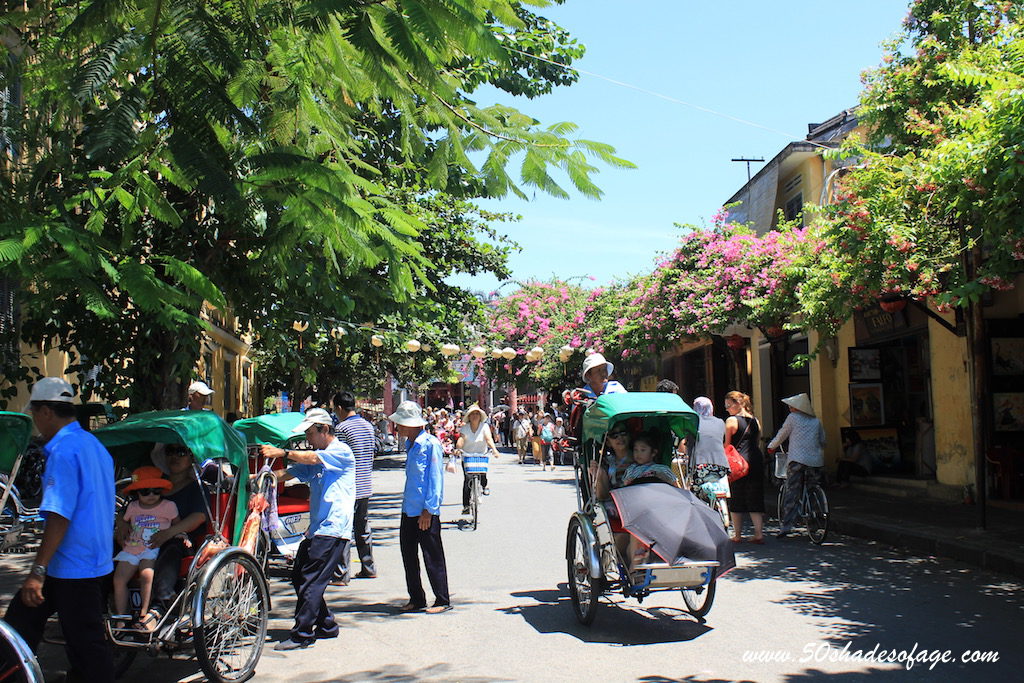 The leafy streets of Hoi An Old Town

Once the sun sets the streets of Hoi An take on a whole different look. Paper lanterns light up the streets and reflect off the river transforming the town into a shimmering wonderland, like you’re in some sort of fairytale. 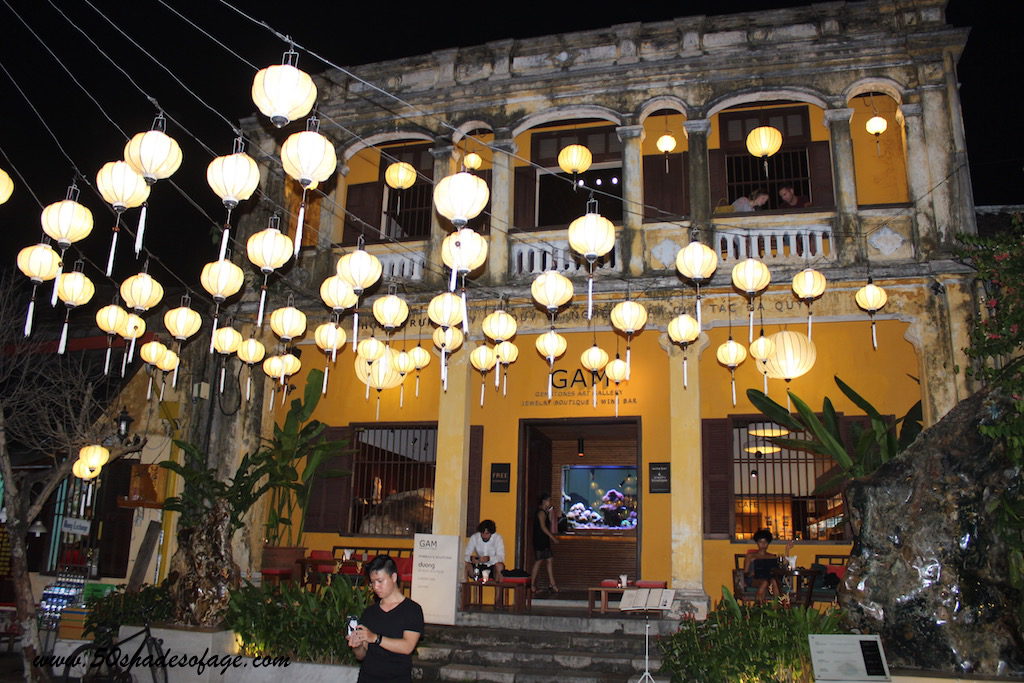 There are many shops selling colourful paper lanterns. 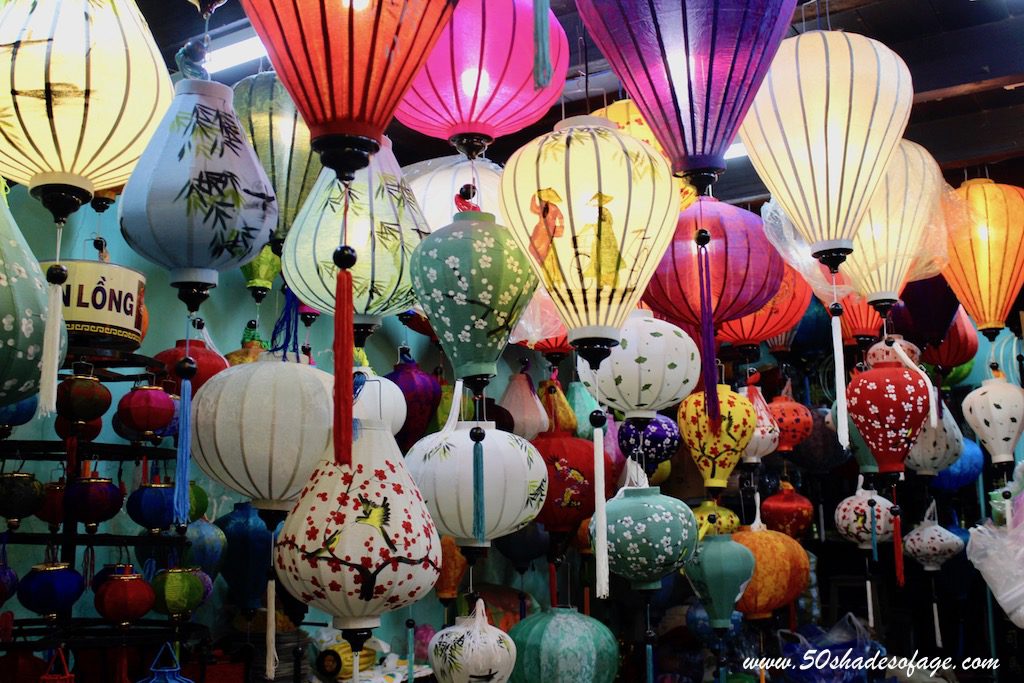 Pretty paper lanterns in a shop in Hoi An

The Thu Bon River is also ablaze with lights reflecting off the water and many long tail boats line the shores selling wares and offering boat rides. 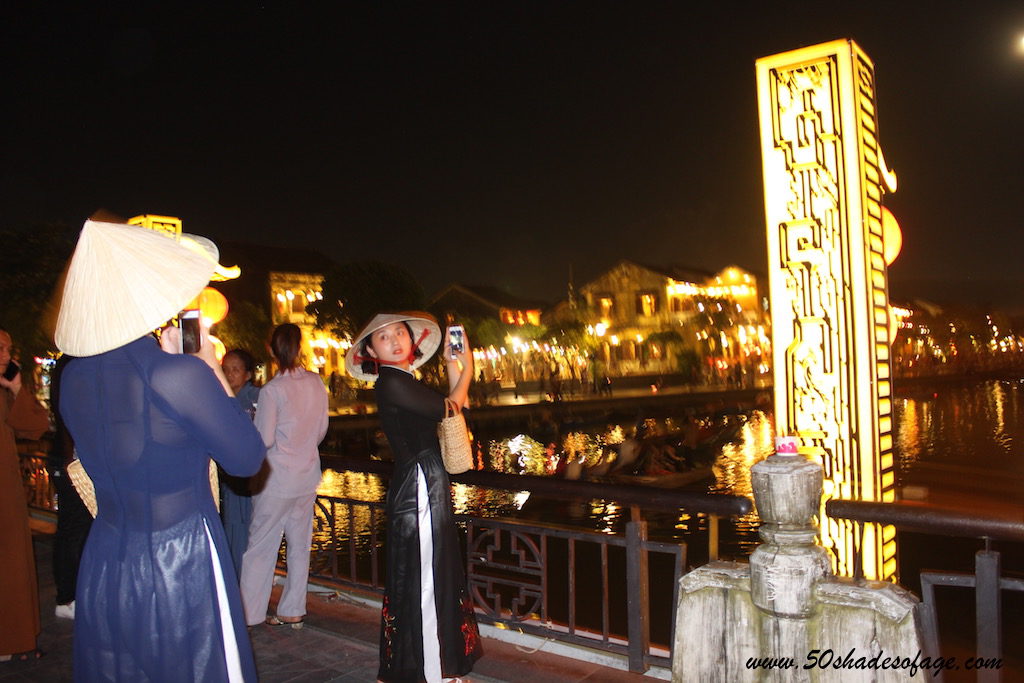 Views from the bridge over the Thu Bon River at night

The town’s buildings reflect a fusion of indigenous and foreign cultures (principally Chinese and Japanese with later European influences). There are several ancient Chinese houses in the old town that charge a small admission price to enter. 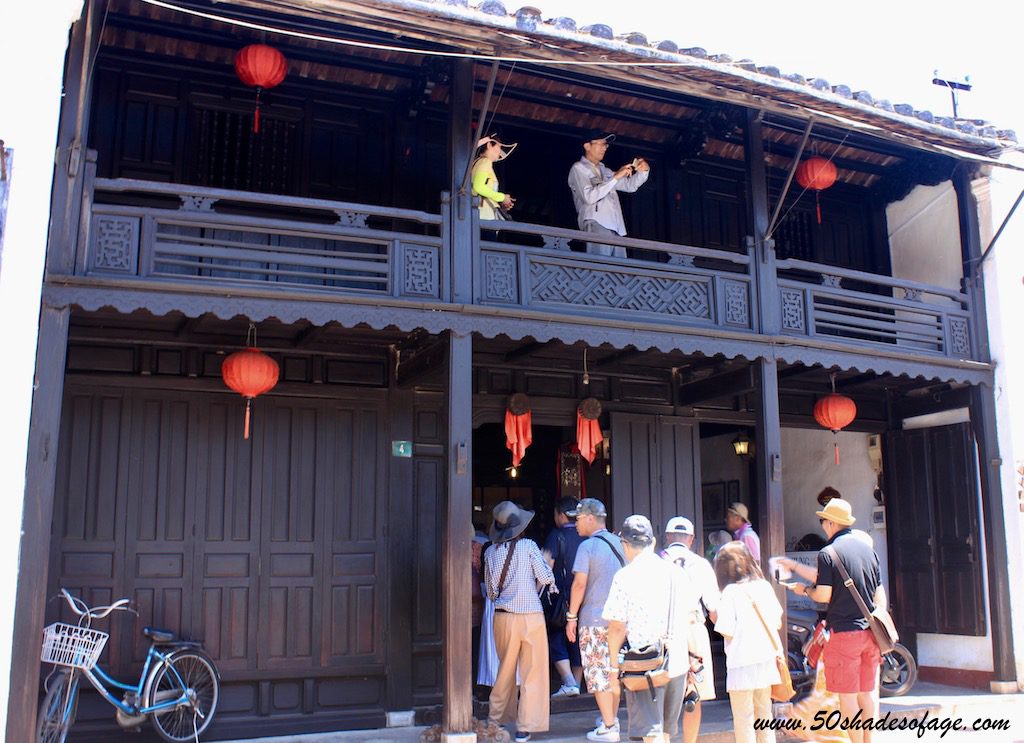 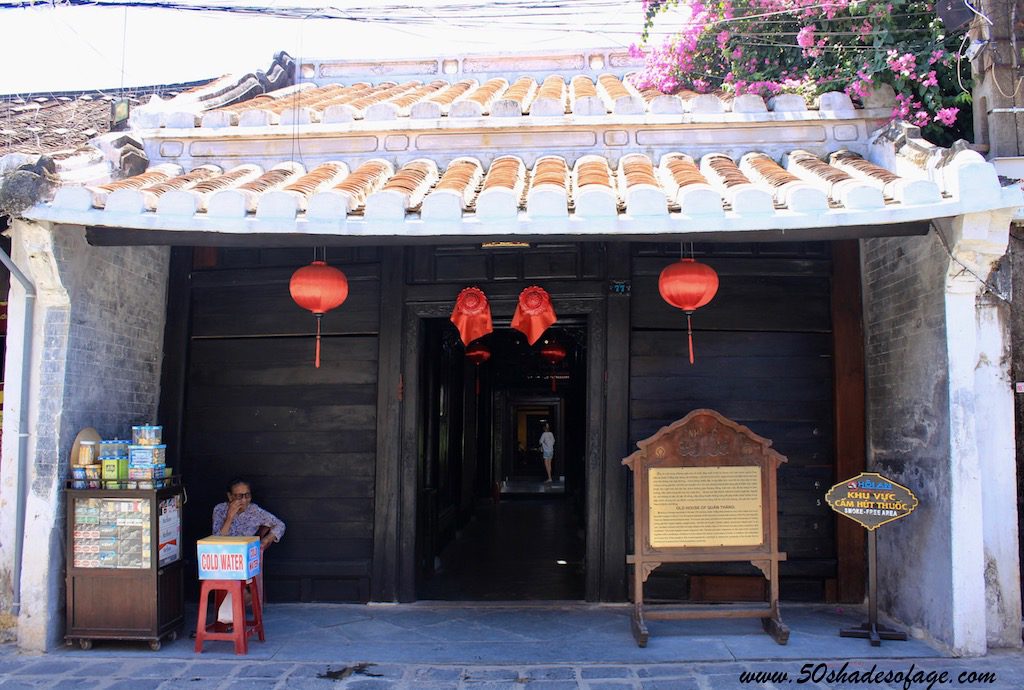 Then there are some beautiful examples of French colonial architecture buildings. 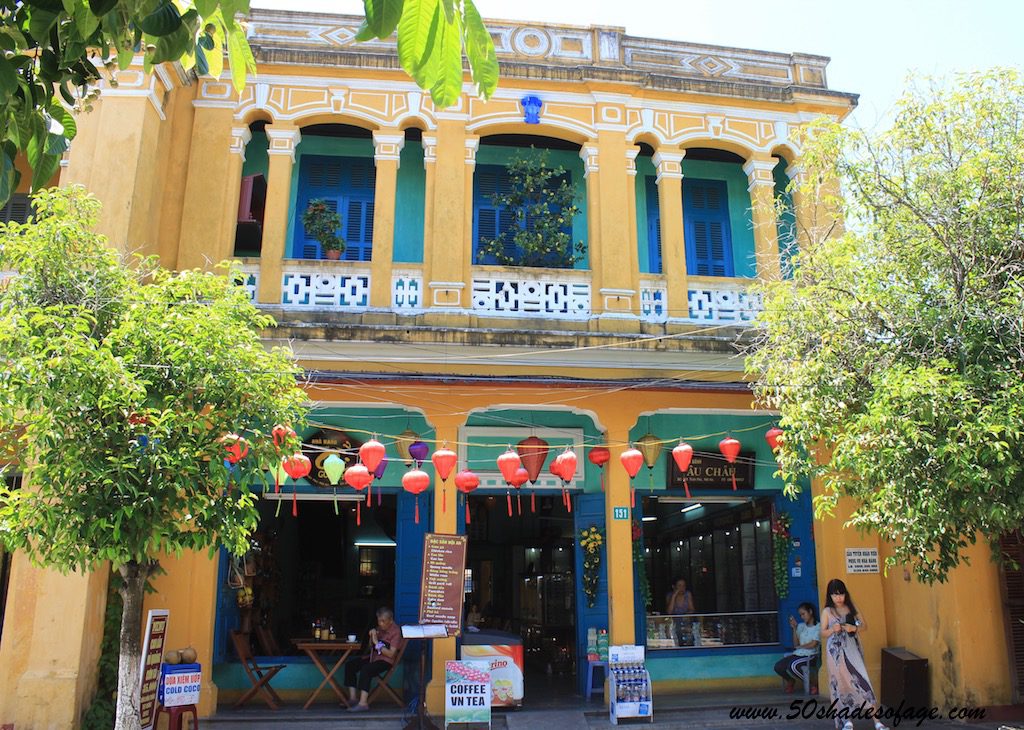 A French Colonial building in Hoi An Old Town

This Chinese building now houses the Hoi An Art Gallery 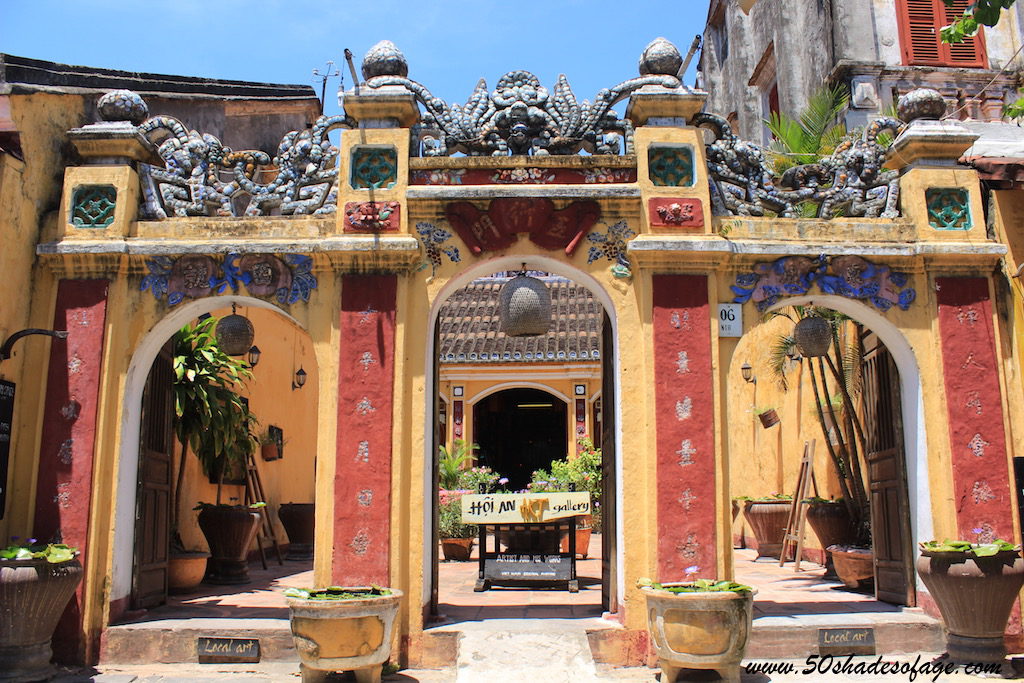 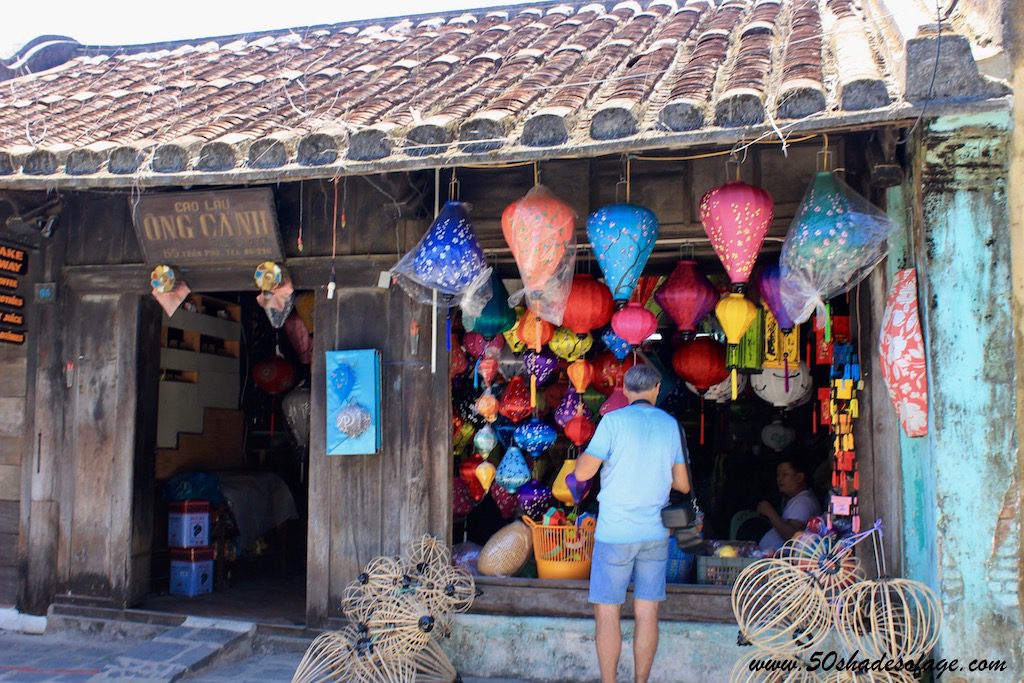 An old wooden building converted into a shop

One of the biggest tourist attractions is the Japanese Covered Bridge that crosses a canal off the Thu Bon River and connects the old town from one side to the other. There is an annexed pagoda on one side of the bridge’s interior, that requires a small admission fee to enter. 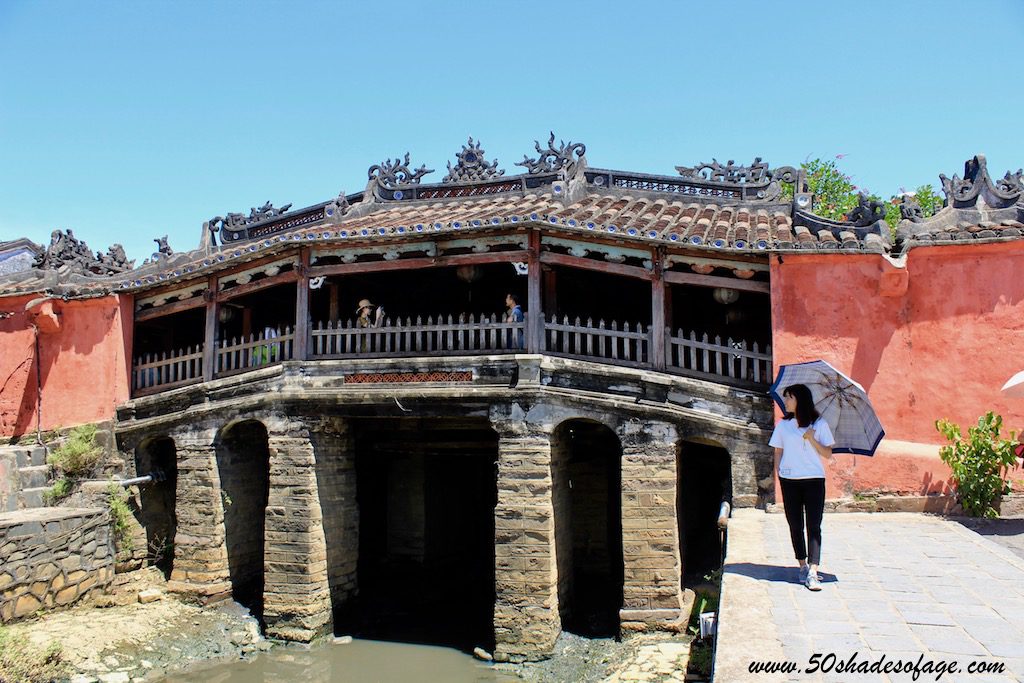 The bridge was constructed in the early 1600’s by the Japanese community, and renovated in 1986. Today, it’s the symbol of Hoi An. 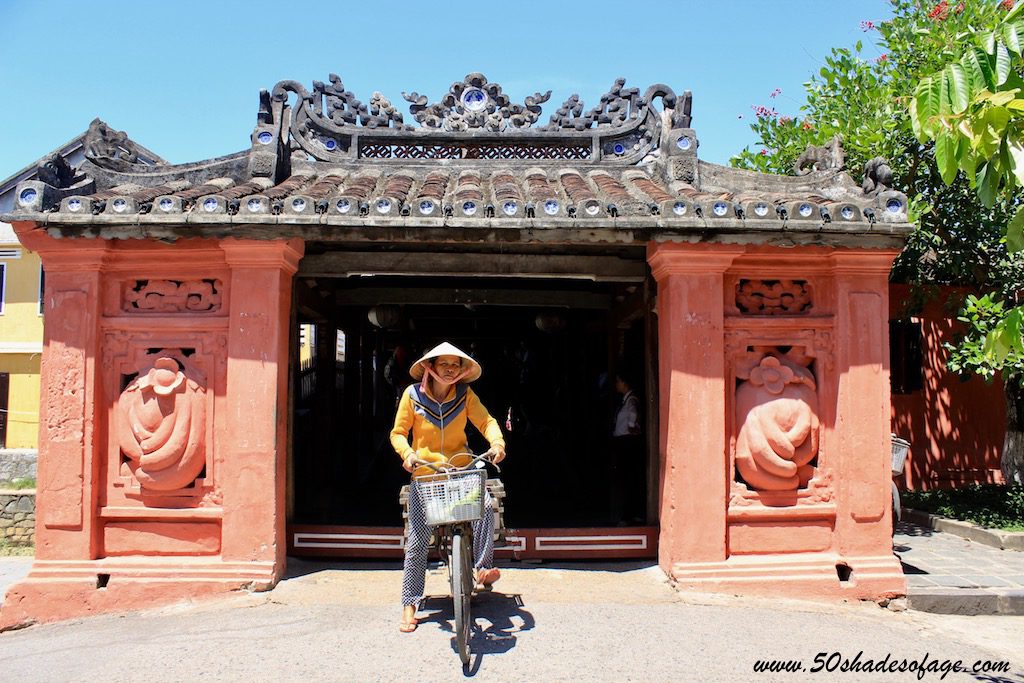 Entrance to the Japanese Covered Bridge

The low-height main bridge across the Thu Bon River is a favourite spot for selfies and modelling photo shoots. If you’re lucky enough to find a space that is! It does get very congested, particularly of a night time. 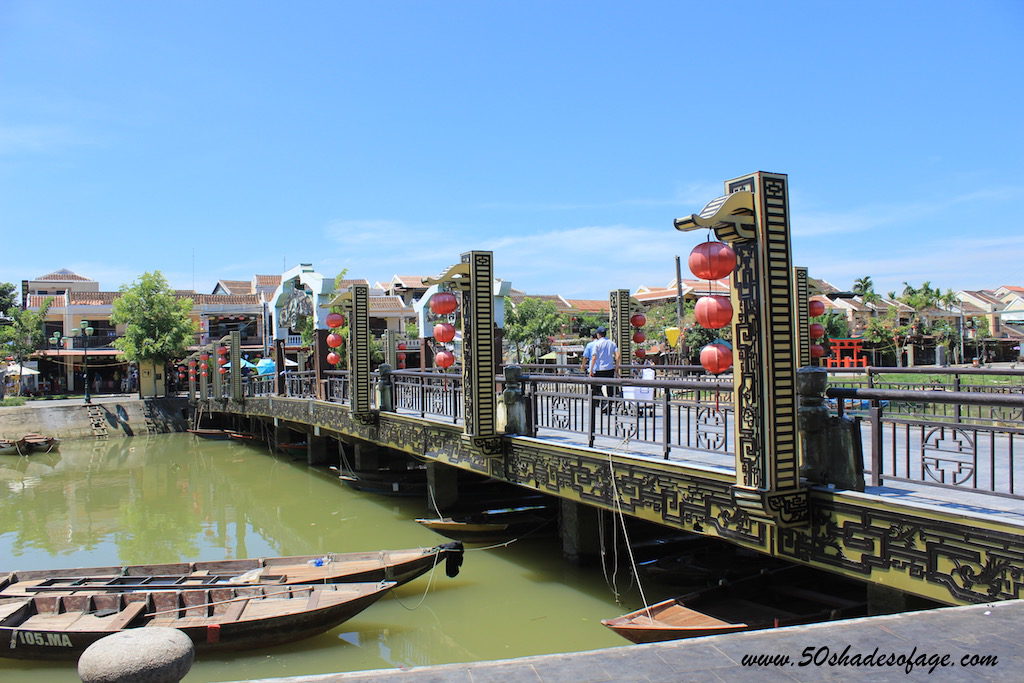 The bridge across the Thu Bon River by day 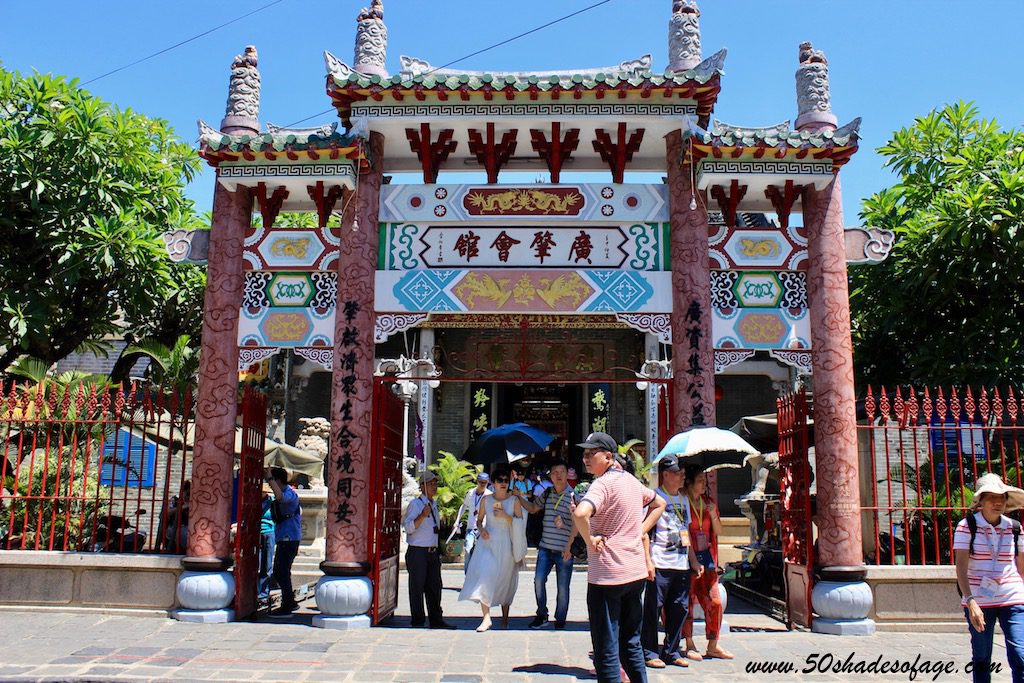 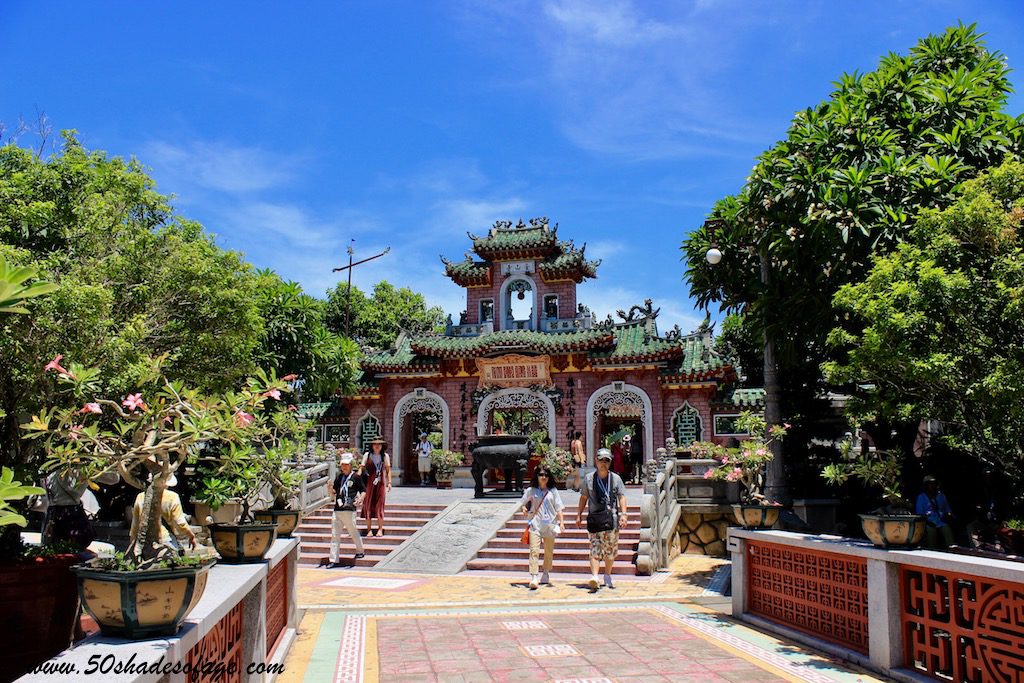 We found Hoi An Old Town to be extremely crowded and stinking hot, so it was a refreshing change to reach the stretch of white sandy beach at An Bang Beach. Surprisingly we found the beach to be relatively uninhabited and although you need to pay (or eat), to sit on a sunbed under a shady umbrella, it was a small price to pay to get out of the hot sun. 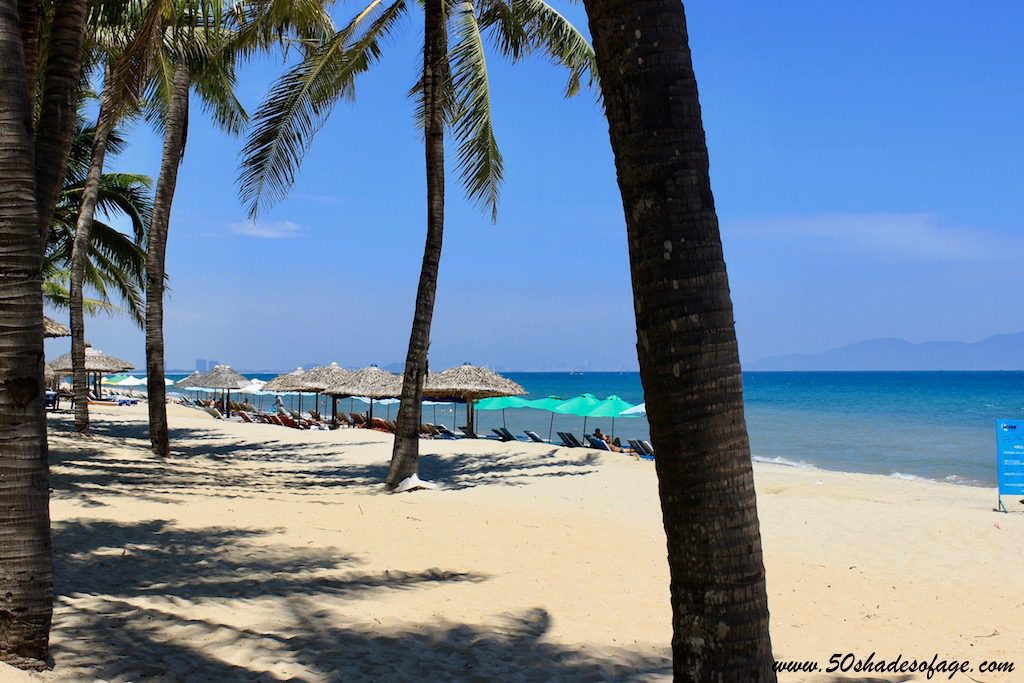 There are a number of casual bohemian beach joints serving up Western food or local seafood. They also offer showers, toilets and comfy spots to hang out – tables, huts, lounges, hammocks, sun beds – all available for the price of a meal. 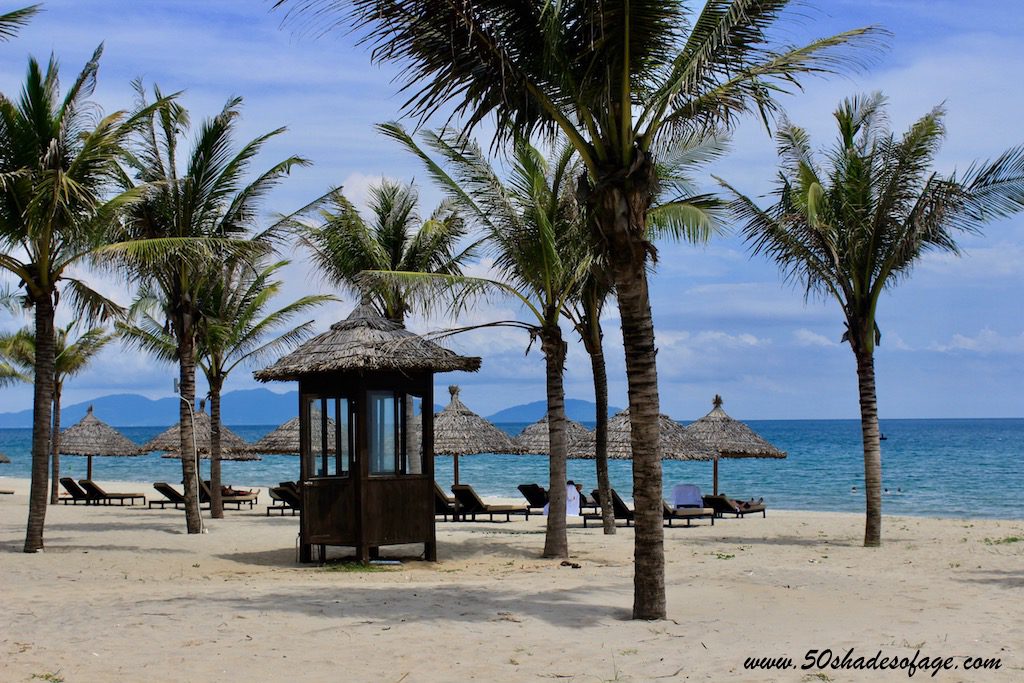 If you want to avoid the eateries and bars travel further north along the beach and purchase a sun lounge and umbrella to rent for a few hundred dong. 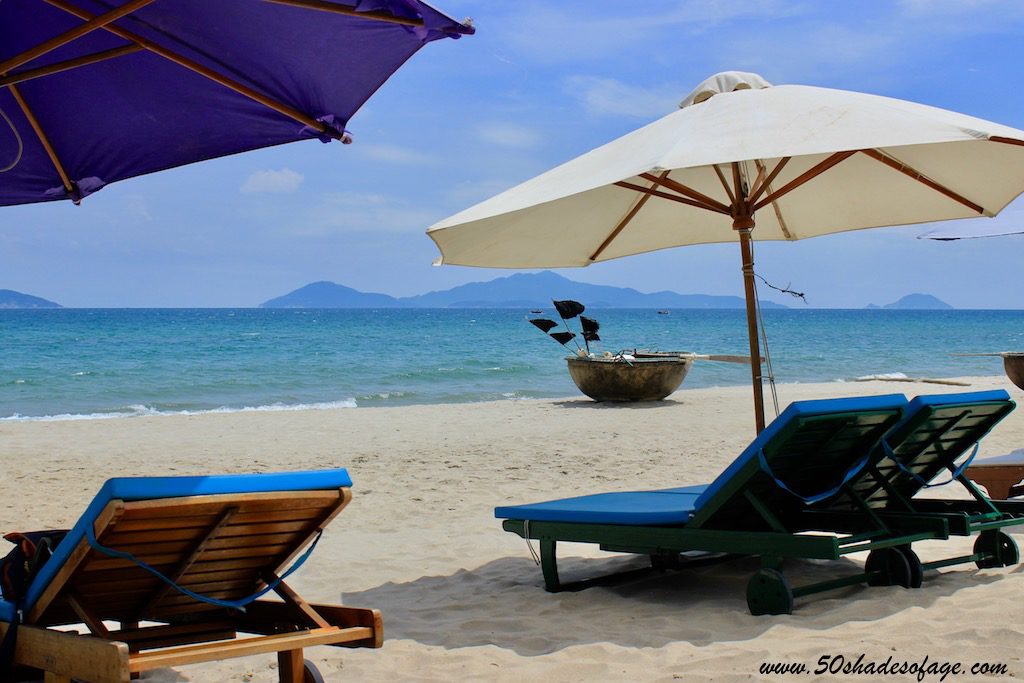 There are a few places that hire out jet skis, paddle boards and even surf boards. Believe it or not, there has been known to be a wave on at An Bang Beach during the wet season from October to February. 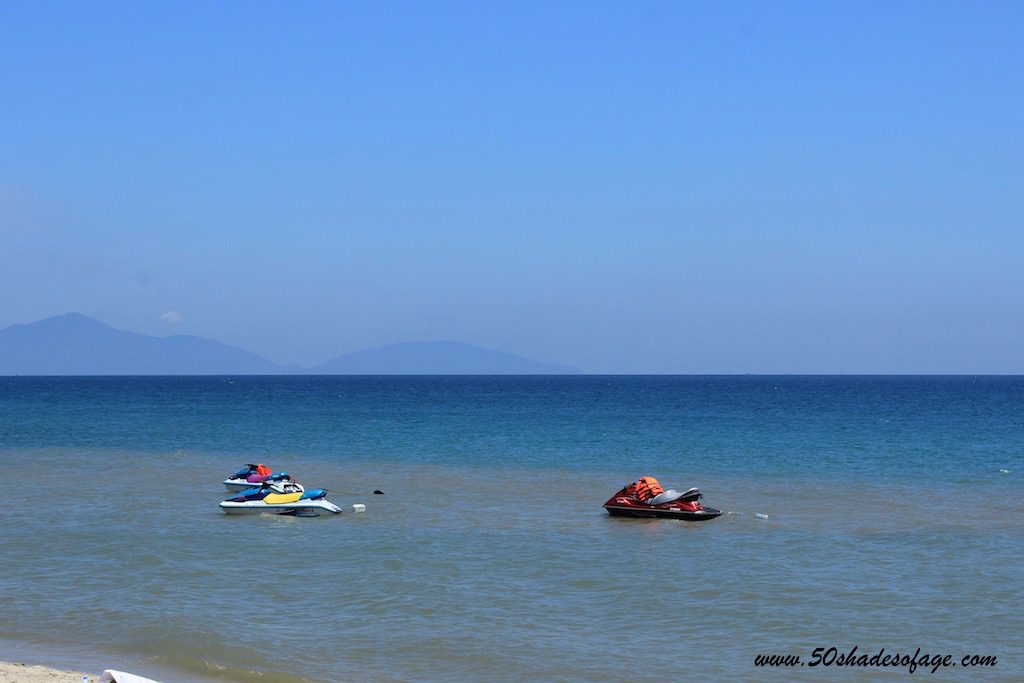 If you want more, and yes there is more! The Thu Bon River that runs through Hoi An is also worthy of spending a few hours on a boat cruise or in a coconut boat. 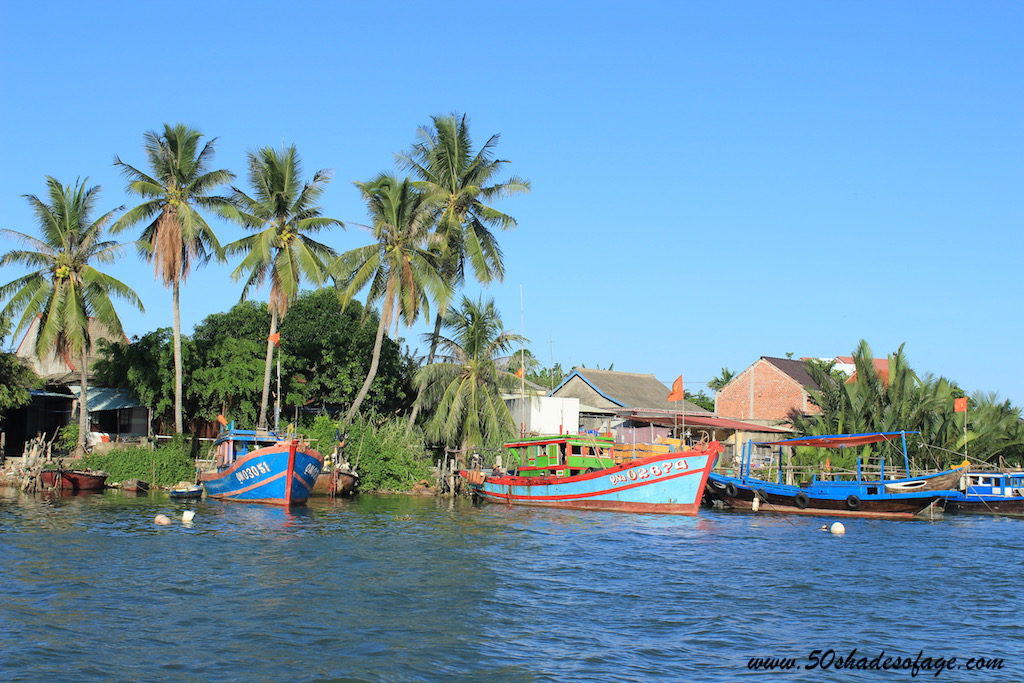 Village and fishing boats on the shores of the river

Hoi An, pretty much wouldn’t exist if it wasn’t for the river, as it was an important trading port from the 16th to the 18th century. The Thu Bon River flows into the East China Sea and trade in the town via the river thrived with the Chinese. 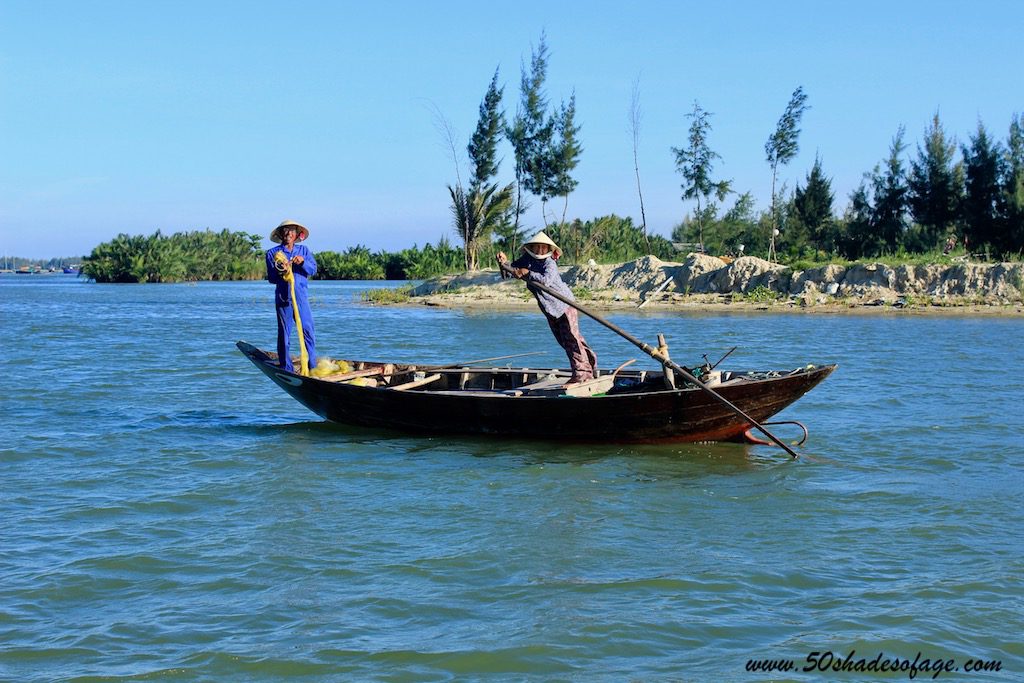 Fishing boat on the river

We hired bikes from our resort and rode them out to the river mouth and then through some of the small fishing villages fringing the river. It was a special experience seeing how the locals live. 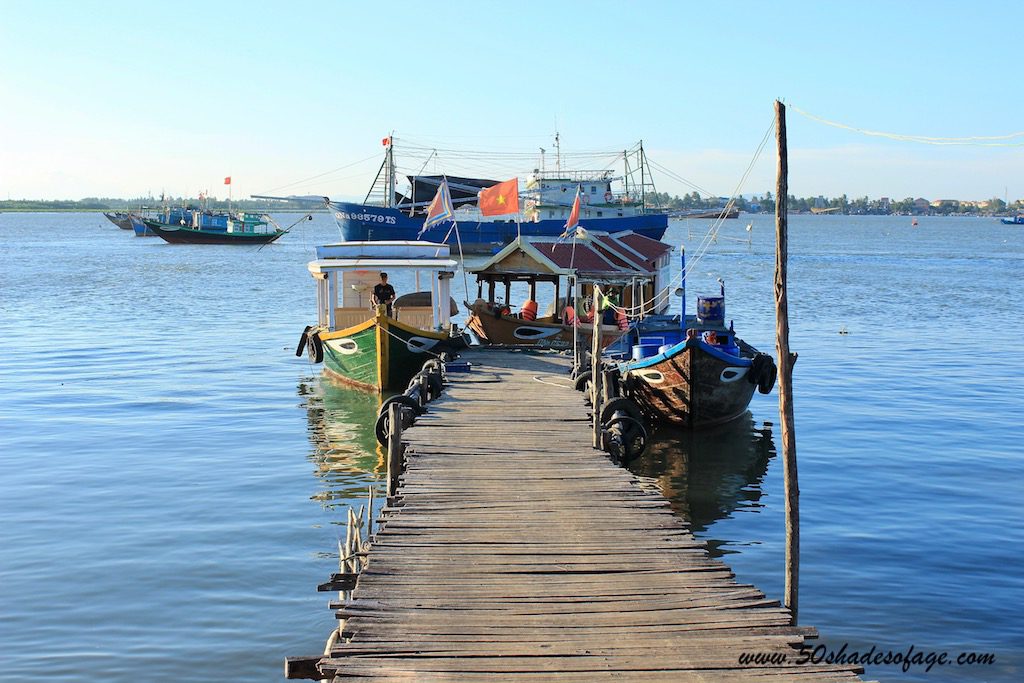 A rickety old jetty on the river

We decided upon a sunset cruise out onto the river, that included a commentary educating us about the history of the river, a stop at the fish markets, a ride in a coconut boat through the palm forests and dinner at the completion of the cruise. Unfortunately, although I had my camera at the ready, the sunset was a big disappointment. The sun disappeared behind clouds without ceremony with a touch of pale pink hue in the sky. 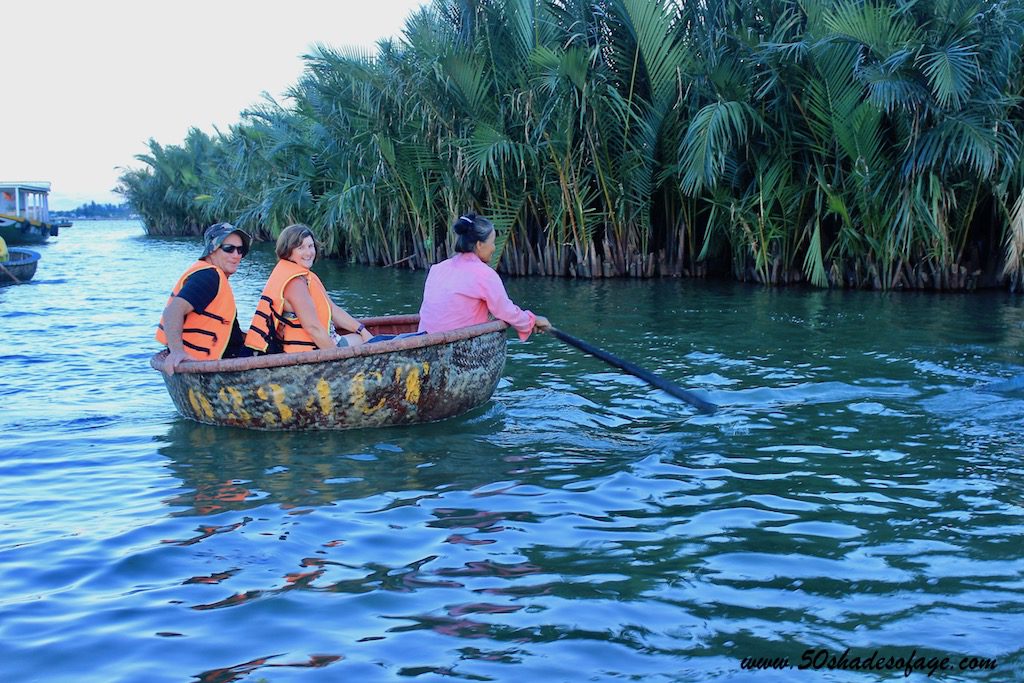 A ride in a coconut boat through the palm forests

Hoi An is an absolute must see on your Vietnam itinerary. There is plenty here to see and do for at least a week’s holiday. As it was our second time here, I would not hesitate in returning for a third time!

Deb from DebbishDotCom
Min from Write of the Middle.
Leanne from Deep Fried Fruit
Jo from Joanne Tracey
and of course me, Kathy from 50 Shades of Age
An InLinkz Linkup

Spread the love
An Bang BeachHoi AnTravel-VietnamVietnamVietnam Holiday
By 50 Shades, December 7, 2017 Kathy was a 50 something year old when she started up this blog 6 years ago, but has since turned over another decade and is now in her early 60s. She is married with two adult children and lives on the Tweed Coast of New South Wales, Australia. Kathy enjoys living life to the fullest and loves to keep fit and active by maintaining a healthy diet and exercising regularly. Some of her interests include reading, photography, travelling, cooking and blogging! Kathy works part-time as a freelance writer but her real passion is travelling and photographing brilliant destinations both within Australia and overseas and writing about it.