Travel Itinerary for Vietnam and Laos 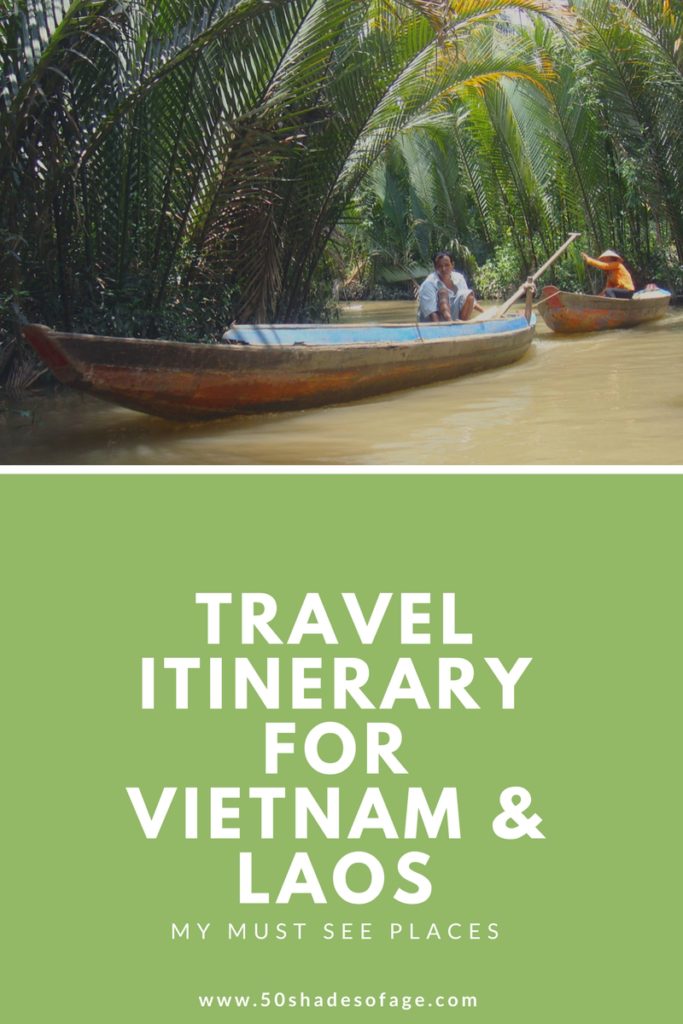 I normally have a rule about travel destinations and that is I don’t visit the same place more than once. So rules are meant to be broken – right? That is why when my husband suggested we return to Vietnam and also take in Laos, on a Luxury Escapes travel deal, this was too good to resist, so I said yes! Our travel itinerary for Vietnam and Laos includes Ho Chi Minh City (Saigon), Hoi An, Hanoi and Sapa in Vietnam and then four days in Luang Prabang in Laos.

If you’ve never been to Vietnam then I can highly recommend it as an interesting and cheap holiday destination. We travelled here in 2012 and again last year on our South East Asian cruise that took in Nha Trang and Vung Tau. There were a couple of places in Vietnam that we vowed we would return to see and they were the War Museum in Ho Chi Minh City, Hue and Da Nang (not far from Hoi An), more of Hanoi sights and the mountainous area of Sapa.

Our travel itinerary for Vietnam and Laos will be as follows: 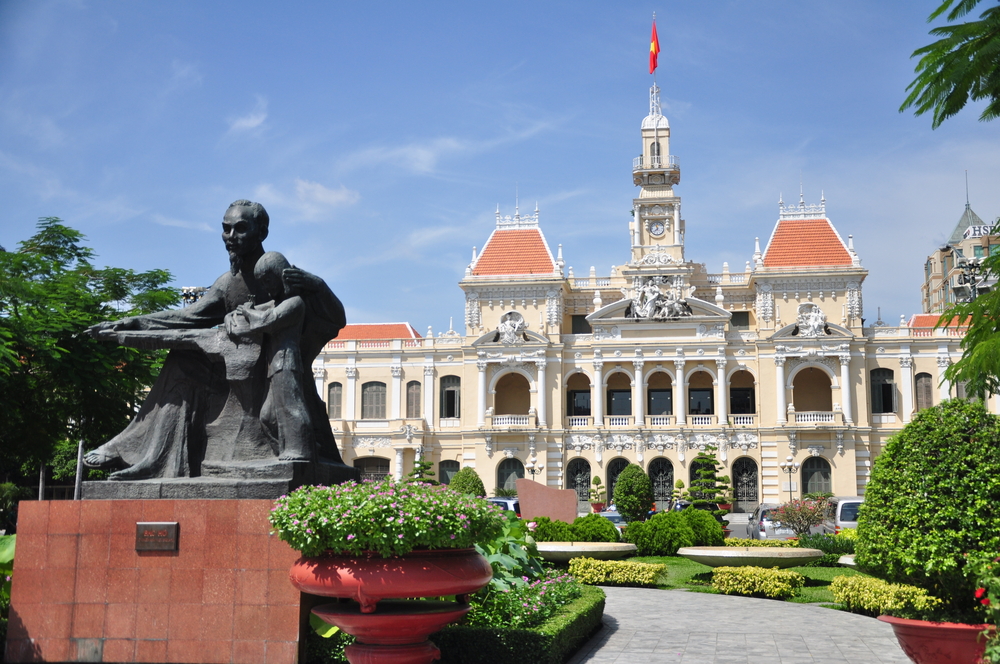 Ho Chi Minh Statue in the city named after him

We only have two nights in this dizzying city in the south of Vietnam so we intend to spend our time wisely. Due to a mini-cyclone (torrential downpour) last time we were here, we missed out on seeing the War Museum, which is largely located outdoors. But I would also like to see some of the charming French colonial buildings that the city is famous for, including including Notre-Dame Cathedral and the 19th-century Central Post Office.

We are staying at the very swish Equatorial Ho Chi Minh City a five-star hotel located right in the heart of the city. Our deal includes an afternoon tea experience, a foot massage, airport transfer, poolside drinks and a half day guided tour of the city. 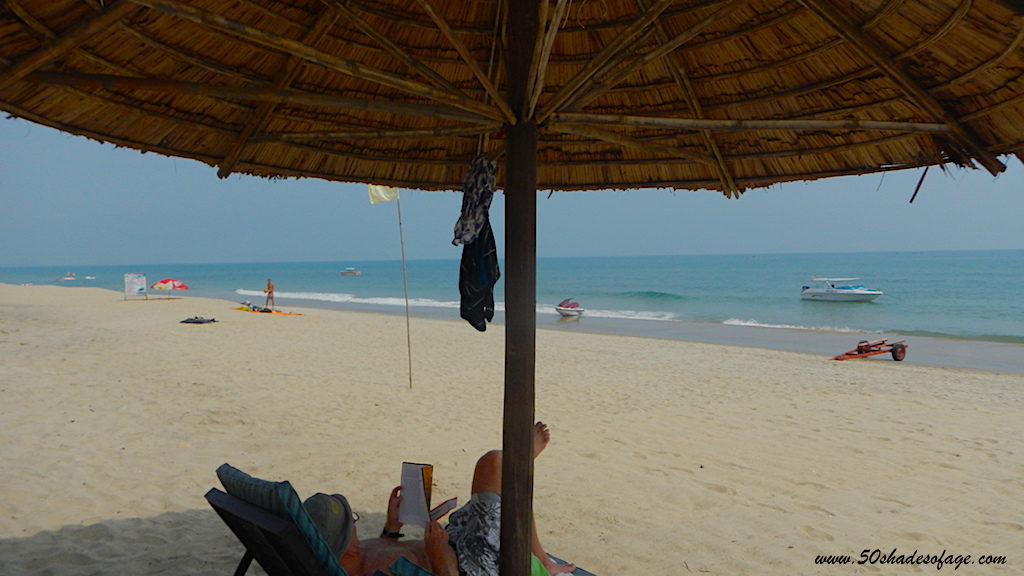 Relaxing on the beach at Hoi An

We have six heavenly nights booked at the Sunrise Hoi An Beach Resort, described as an oasis of tranquility located directly on Cua Dai Beach. If I can extract myself from my beach sunlounge, there are many little extras that we have included with our deal. Luxuries like: an afternoon tea experience, two free daily meals, a daily spa treatment, shuttle service to Da Nang Airport, daily shuttle bus into Hoi An and a Vietnamese cooking class. Do I need to go on!!

With its location on the Thu Bồn river and the seaside, the charming old town of Hội An is a delightful place to stroll around as there are no vehicles allowed. There are many sights in town including temples, ancient houses, chapels and the famous covered Japanese bridge.

If you head south over the central footbridge to An Hội islet, the riverfront is lined with bars and restaurants which are perfect for sipping a cold beverage at the end of the day. At night the riverfront is ablaze with colourful paper lanterns that reflect light onto the river. 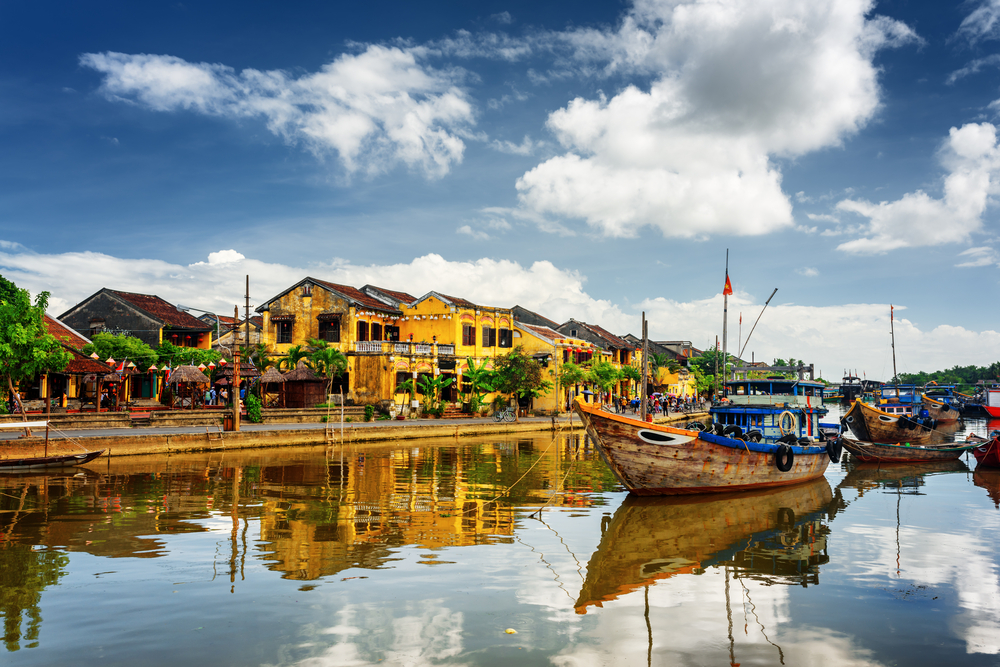 The colourful river in Hoi An

My wish this time around is to take a day trip to Vietnam’s former imperial capital Huế, that has sights including temples, tombs and the Purple Forbidden City. We would also like to check out China Beach, a long, sandy beach that stretches 30 kilometres south from Da Nang, that was used as a destination for American soldiers for R&R during the Vietnam War. 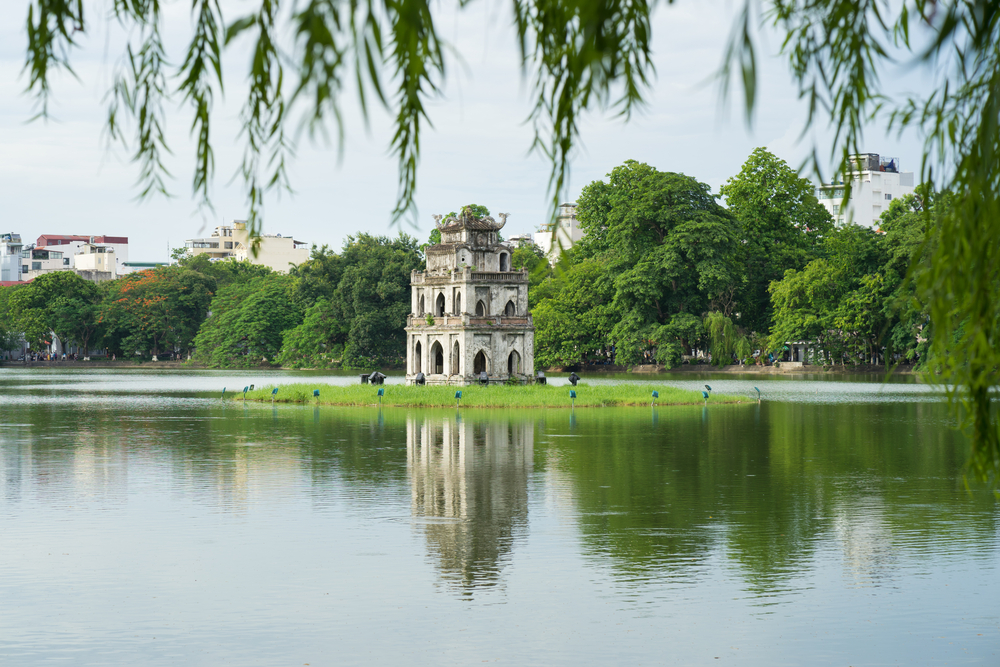 During our last visit to Hanoi we used it as a transition point to access Halong Bay, so we never really got to sightsee in this thriving city in the north of Vietnam. This time around we are doing a similar thing because we intend heading off to Sapa on a tour the following day after our arrival. However we will get an afternoon and evening here to do some sightseeing.

There are many historical sights in this 1,000 year old city including the Imperial Citadel, Ho Chi Minh Mausoleum, the Perfume Pagoda, Hanoi Opera House, Temple of Literature, Hanoi Old Quarter and Hoan Kiem Lake, to name a few.

Our accommodation in Hanoi is located in the Old Quarter at the Hanoi Elite Hotel which is just a few minutes from Hoan Kiem Lake, Hanoi’s heart. 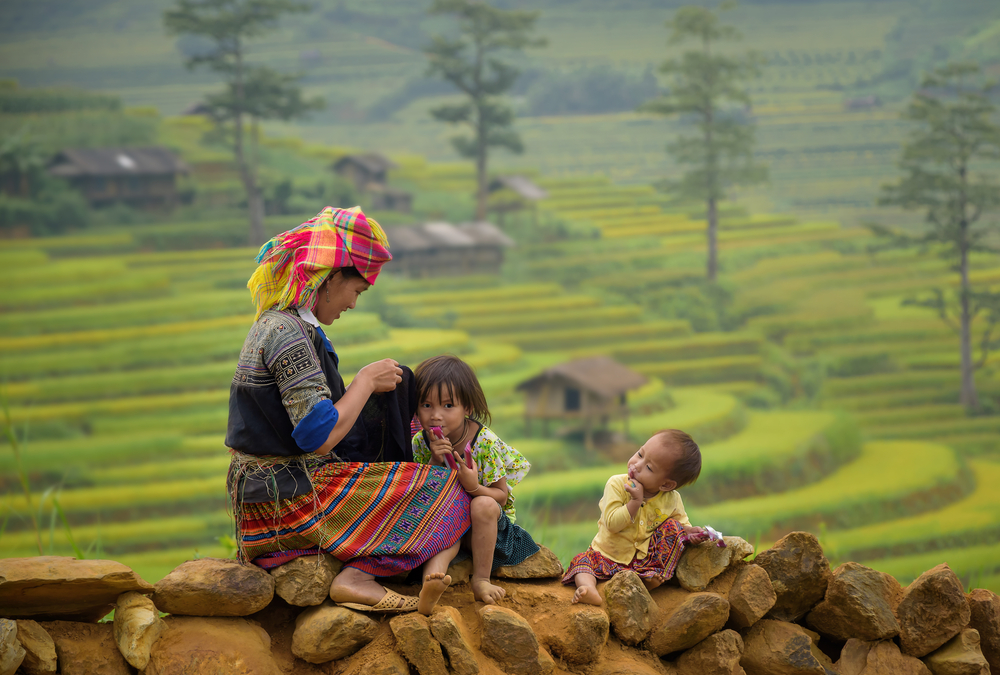 From Hanoi we are heading off on 3 day tour of the Sapa region in the Hoàng Liên Son Mountains of northwestern Vietnam. We’re travelling by bus to Sapa and doing a short trek to Cat Cat village the first day; a Sapa discovery tour and a long trek to Y Linh Ho, Lao Chai and T Van village on the second day; and lastly a visit to Bac Ha Market in Sapa and returning to Hanoi via Lao Cai in the afternoon on the third day.

The mountain countryside is verdant and lush with terraced rice fields into the hillsides and tiny little rural villages that haven’t changed much in over a hundred years. Sapa itself is a colourful town thanks to the H’mong and Dzao people in their unique ethnic dress, who come from the local hill tribes and head into the town’s market every day to trade their produce.

We’re very much looking forward to this part of Vietnam for the spectacular scenery that abounds in the region and meeting the colourfully dressed hill tribe people. 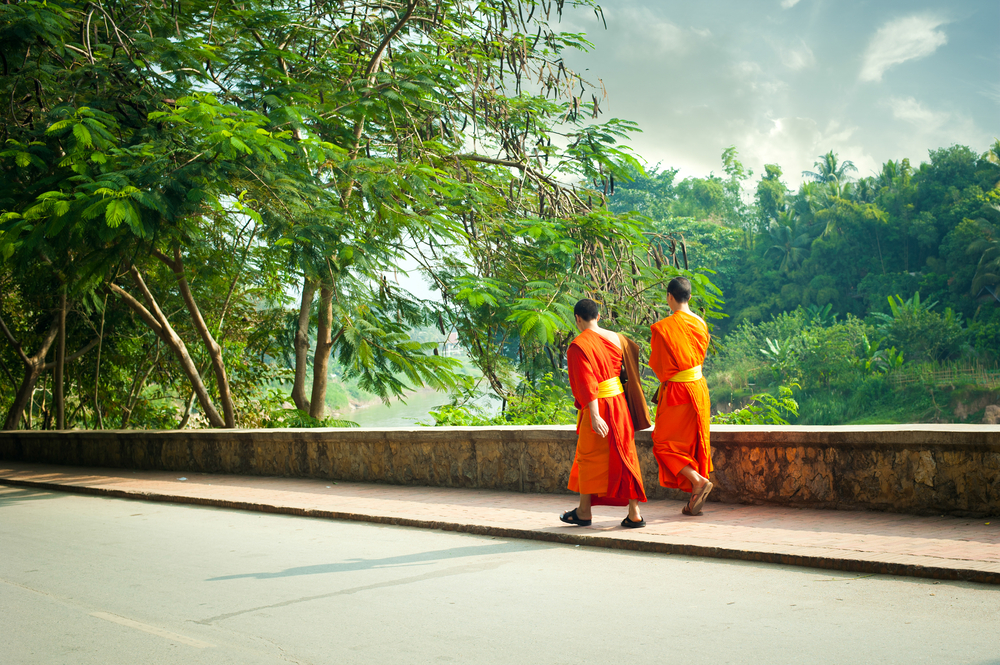 Monks walking along the Mekong River in Luang Prabang

After returning to Hanoi for one night, and more than likely being exhausted after trekking in Sapa for a few days, we fly out to Luang Prabang in Laos. Only an hour’s flight away, Luang Prabang was once the heart and soul of the ancient Lao Kingdom and is a designated World Heritage site. It apparently is endowed with a rich legacy of historic red-roofed temples and French-Indochinese architecture, and some amazing cuisine.

Our Luxury Escapes hotel is at the Sofitel Luang Prabang for four nights, a former old colonial mansion surrounded by lush botanical gardens. Built in the 1900’s as the governor’s residence, the property boasts fortified walls and watchtowers, and was eventually transformed into a luxury all-suite hotel. We are once again getting a few luxuries included like: daily buffet breakfast, multi-course dinner, interactive cooking class, 90 minute Lao wisdom massage, afternoon tea, bike hire and airport transfers. 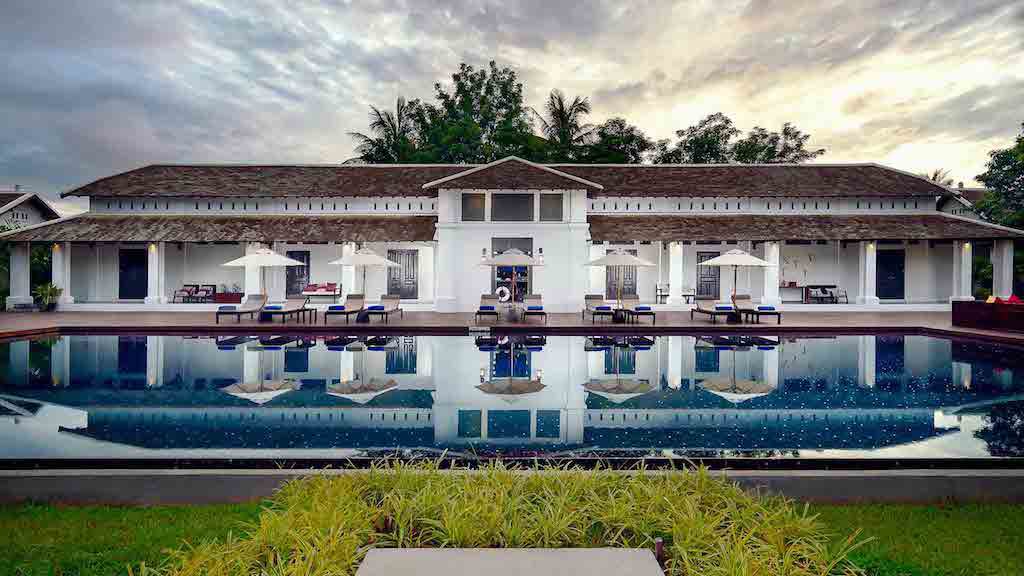 The Sofitel Hotel at Luang Prabang

Other things to do and see around Luang Prabang include Kuang Si Falls and Butterfly Park, The Living Land Company, Elephant Village, Wat Xieng Thong, Ban Xang Hai village, Pak Ou Caves and Mount Phu Si. If we’re willing to get up early one morning we can see the amazing procession of saffron-robed monks on their daily outing. I can’t wait to see this!

Don’t you think our 18 day holiday to Vietnam will be amazing? I can barely wait to get there! Naturally I will be capturing some stunning images during our travels and I will bring it all to you when we return.

If you are interested in holiday packages like this one that includes 5-star accommodation and lots of added extras then click on the Luxury Escapes logo on the sidebar of my blog.

Remember to get your Vietnam Visa before you go and beware of Visa Scams.

Have you been to Vietnam or Laos? I would love to hear what you think of these places as a holiday destination.

Spread the love
HanoiHo Chi Minh CityHoi AnLaosLuang PrabangSapaTravel-VietnamVietnam Itinerary
By 50 Shades, August 24, 2017 Kathy was a 50 something year old when she started up this blog 6 years ago, but has since turned over another decade and is now in her early 60s. She is married with two adult children and lives on the Tweed Coast of New South Wales, Australia. Kathy enjoys living life to the fullest and loves to keep fit and active by maintaining a healthy diet and exercising regularly. Some of her interests include reading, photography, travelling, cooking and blogging! Kathy works part-time as a freelance writer but her real passion is travelling and photographing brilliant destinations both within Australia and overseas and writing about it.