The Islands of Venice of Murano, Burano & Torcello 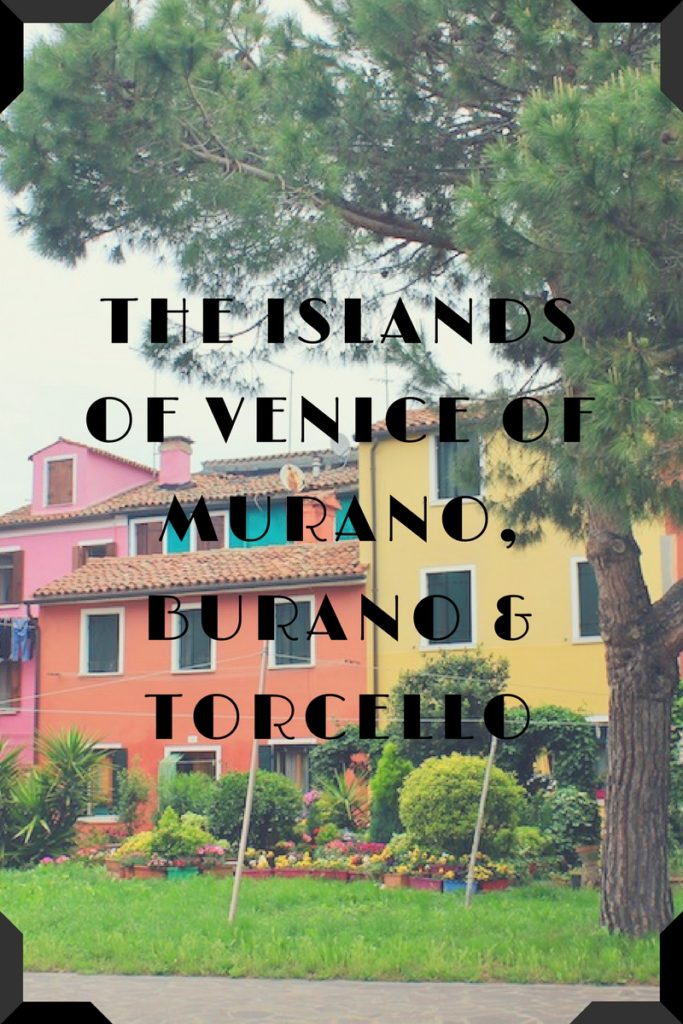 With our cruise done and dusted, we disembarked from the Westerdam and booked into a hotel in Venice for a couple of nights. Once we dropped our luggage off we set off to St Marks Square where we jumped aboard another boat, a tad smaller, to cruise around the islands of Venice of Murano, Burano & Torcello. What a day we had in store for us!

The islands of Venice aren’t far from the historic centre of Venice and comprise of a series of islands scattered in the lagoon like pebbles, each with its own personality and charms. Collectively, they offer a glimpse into a Venice most visitors rarely take the time to find. We set off to explore three of these little gems on what was a hazy day with very poor visibility across the lagoon. 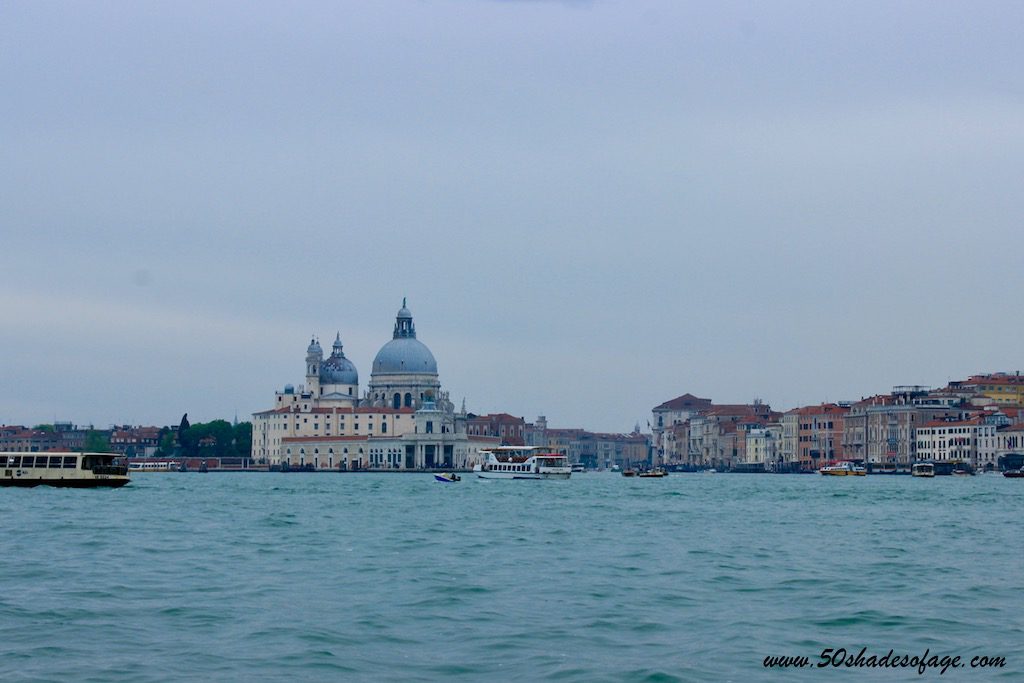 I’m sure everyone has heard of Murano Glass and has at some stage purchased a piece of jewellery or glassware with the Murano insignia on it. My good friend brought me back a pair of Murano earrings as a gift years ago when she was holidaying in Italy. So I was looking forward to actually visiting the island called Murano, renowned for it’s beautiful glassware, for this fact alone. 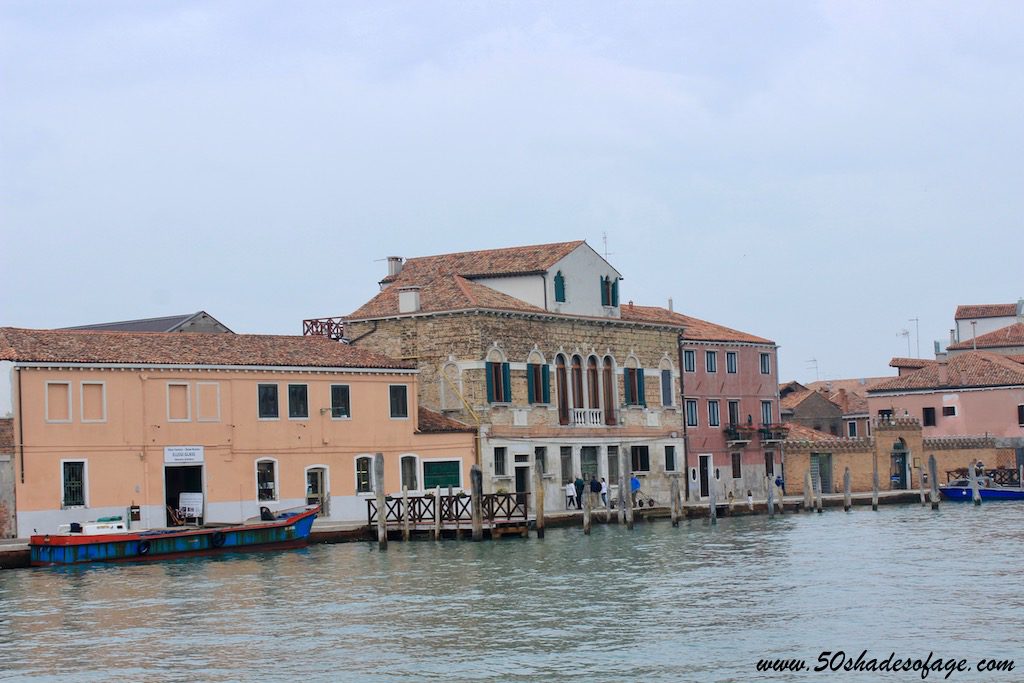 The Venetian Island of Murano

Murano is a series of islands linked by bridges in the Venetian Lagoon, and was a commercial port as far back as the 7th Century. In 1291, the Venetian Republic ordered glassmakers to move their foundries to Murano because the glassworks represented a fire danger in Venice, whose buildings were mostly wooden at the time. So Murano became known as the Glass Island. 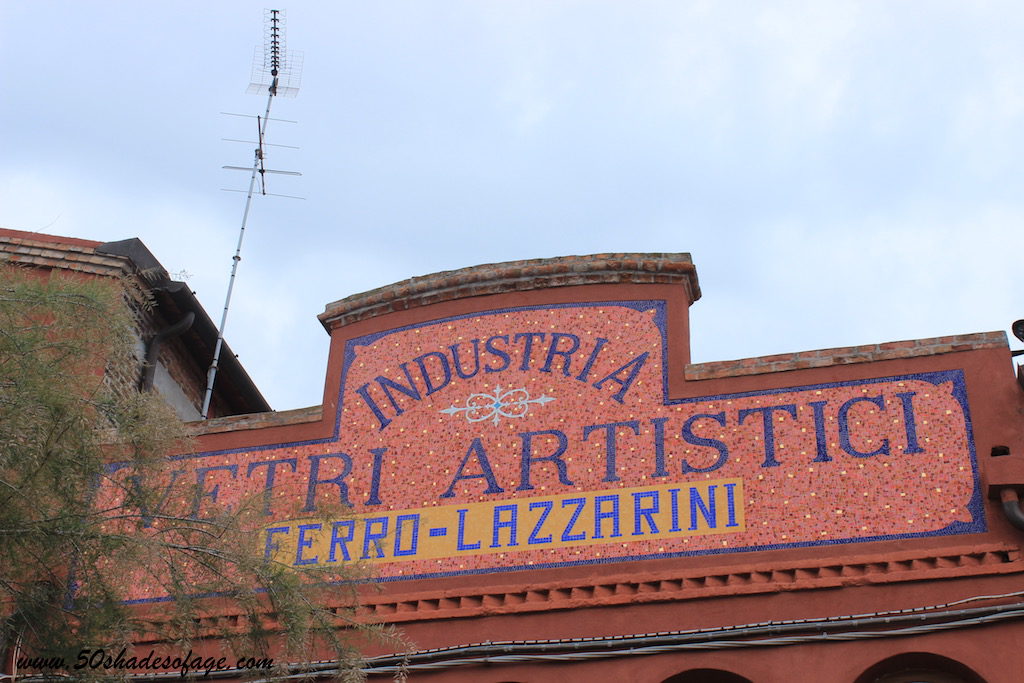 A Factory Facade in Murano

We got off the boat and made our way into one of the Murano Glass Factories to watch the artisans at work at the ancient art of glassblowing. Once we watched the glassblowing demonstration we were led into the showroom, of course! Here we were able to look but not touch, beautiful pieces of glassware, including glass vases, plates, figurines and jewellery. A word of warning, these pieces of glassware do come at a hefty price tag if you are tempted to buy. 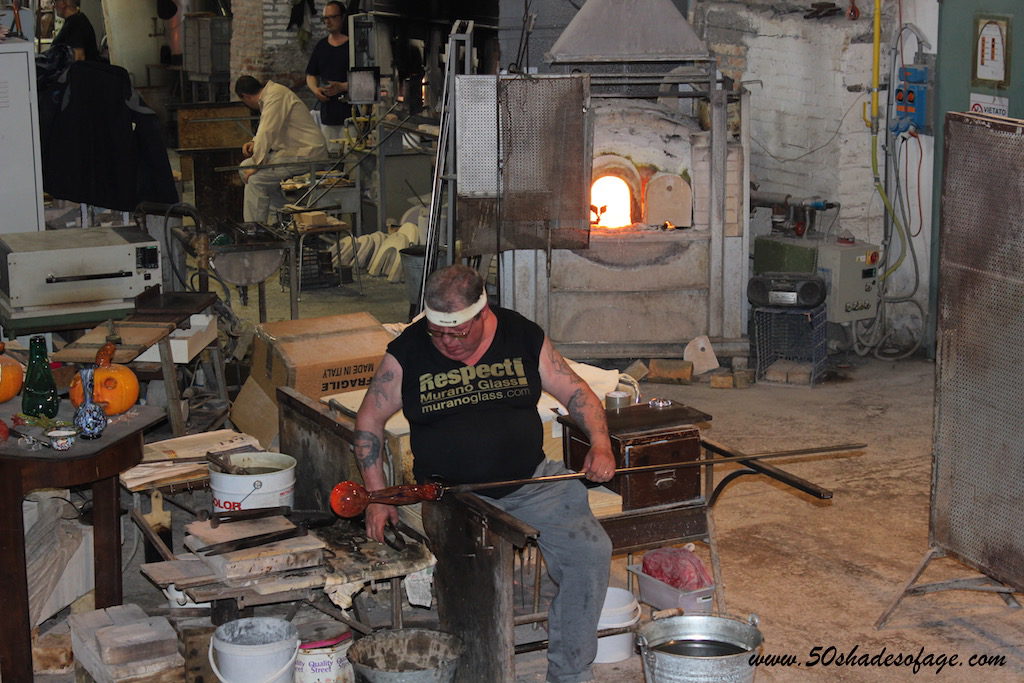 Although time only permitted our Glass Factory tour before we were dragged out of the shop and whisked back onto the boat, there are many more beautiful galleries displaying pieces of glass art on the island. Also, don’t miss the island’s glass museums and leading churches.

You may have seen photos of Venice that show brightly-painted buildings and flowerpots? Well we discovered that these aren’t from the main island of Venice, but from the island of Burano. Apparently families used to paint their homes in bright colours to designate where their family’s quarters ended and a neighbour’s began, as well as to make their homes more visible from the sea. 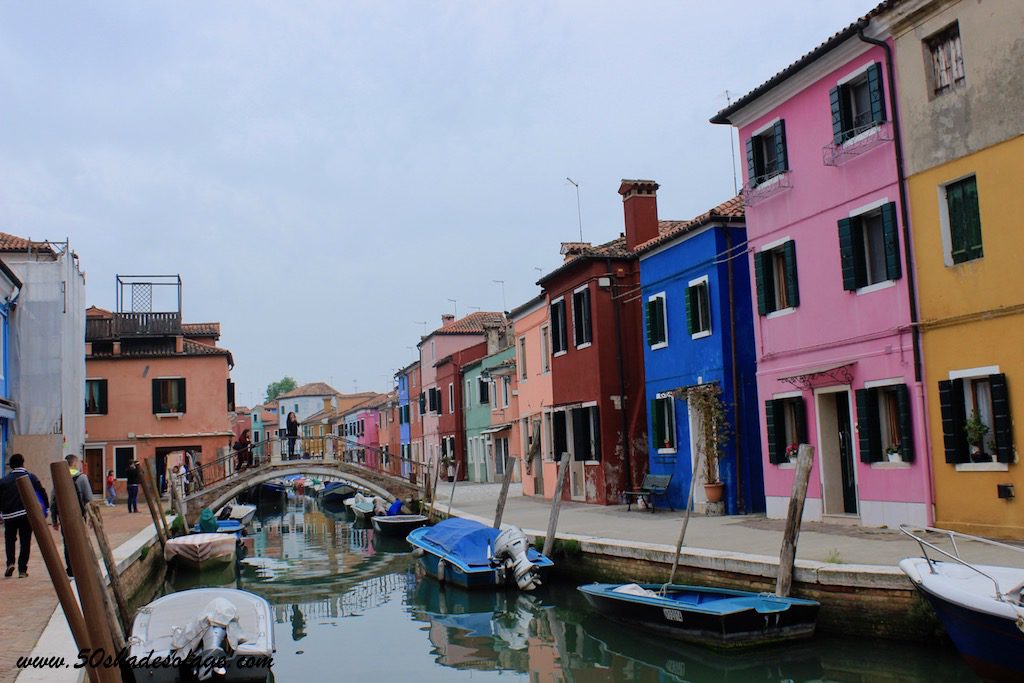 The brightly coloured houses of Burano

On our second stop on our tour we explored the multi-coloured masterpiece of Burano. It’s like a real-life canvas of brightly coloured buildings with small canals and pretty arch bridges running through the island. The town is full of interesting shops with lots of them selling trademark lace the island is famous for. The art of lacemaking has been handed down generation after generation to the womenfolk of Burano. 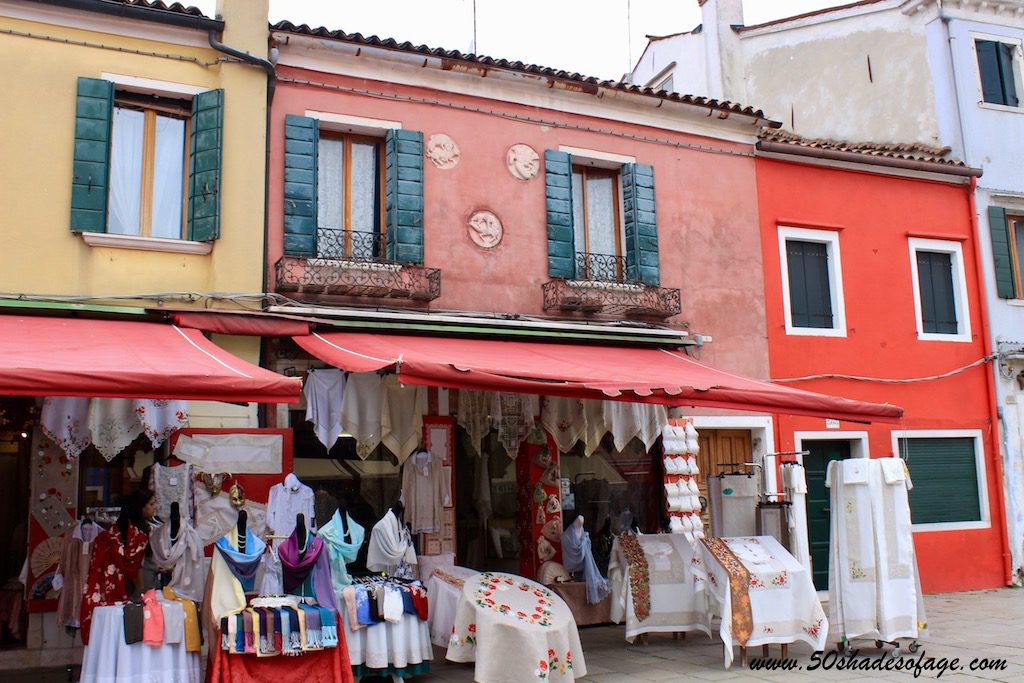 Although there is a are touristy section of Burano, the rest of it still has the working-island feel that you wouldn’t find in Venice. Fishing boats come in at the end of the day with their catch; local women peer over their flower boxes at the tourists wandering below. It was all so uniquely charming and beguiling. 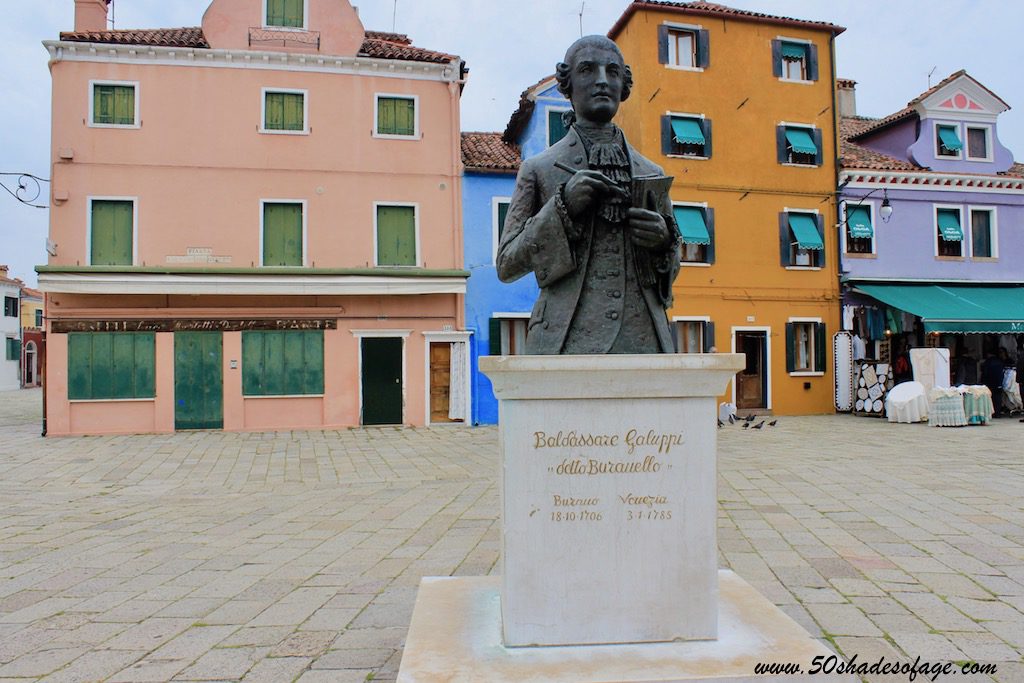 We wandered down Via Galuppi, the island’s main street, that is lined with pastry and souvenir shops, stores, bars, and restaurants. 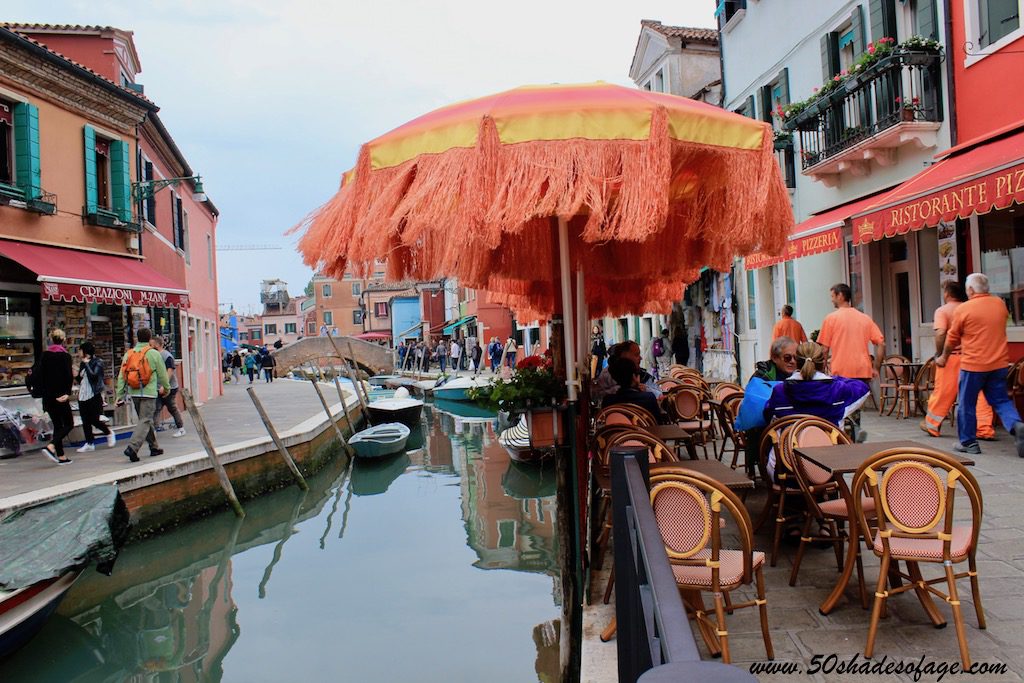 The streets in Burano

Burano even has a leaning tower, a former bell tower of the 15th century San Martino Church that is a great spot for pictures. Sadly we had leave this colourful island, so it was back on the boat to continue our three island tour. 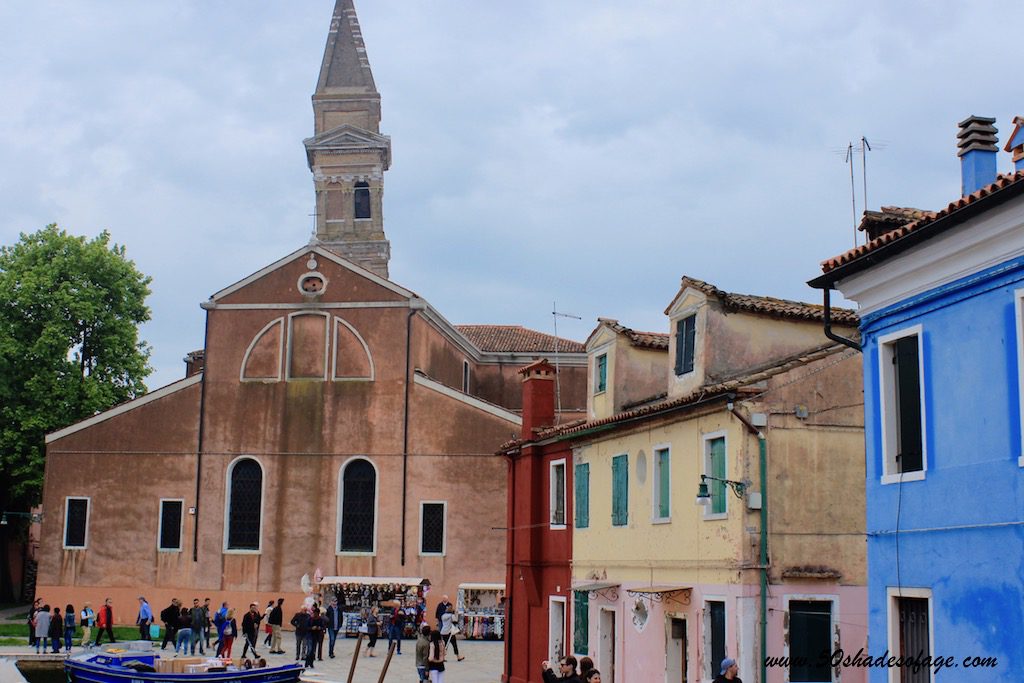 You might say that we saved the best for last. Torcello, the most northerly island of the Venetian Lagoon, was the largest and most important settlement of all the islands nearly 1,500 years ago. Once we got off the boat we strolled beside a canal down a long lane for around 10 minutes, crossed an old stone arched bridge until we reached the main square of Torcello. 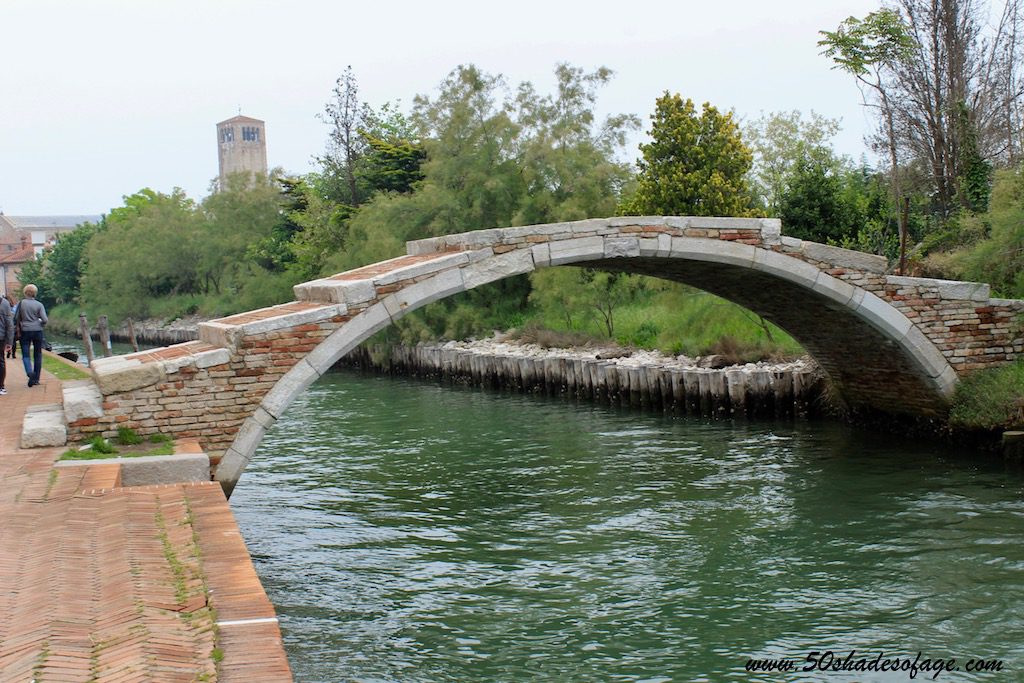 One of the Bridges over the canal in Torcello

We were immediately drawn to a marble throne at the centre of the square, the so-called “Attila’s Throne”, erroneously attributed to the famous leader of the Huns. A magnificent Byzantine-Italian cathedral dating back to 639 A.D., the Basilica of Santa Maria Assunta, looms over the square with the Bell Tower and Church of Santa Fosca alongside. 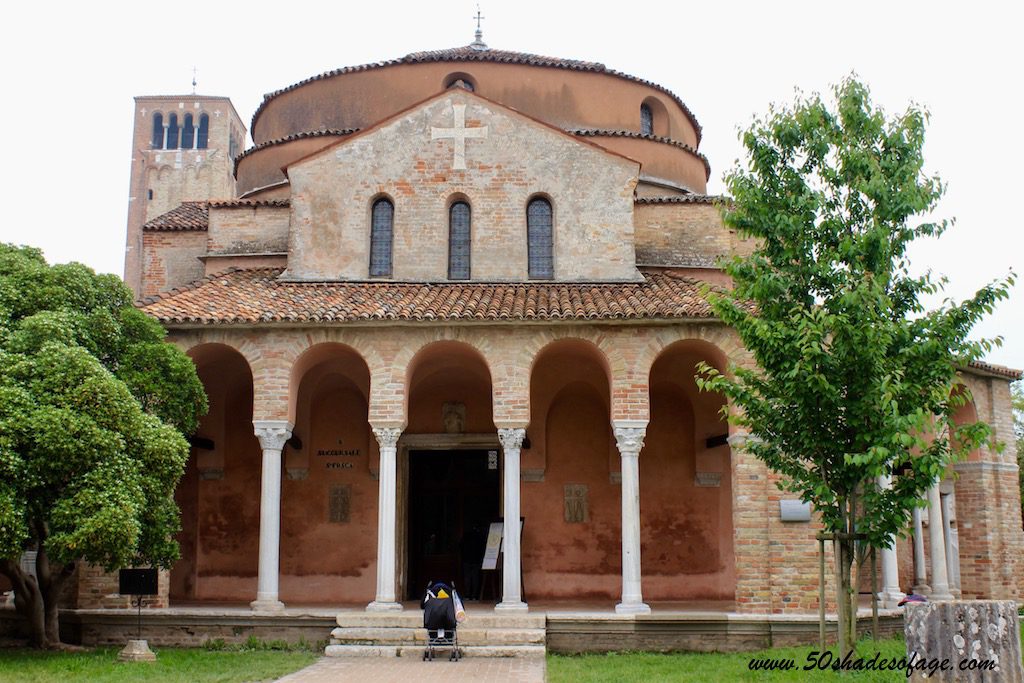 The cathedral is a remarkable piece of architecture featuring some amazing mosaics, that you can observe inside or you can scale up the Bell Tower for a small charge. 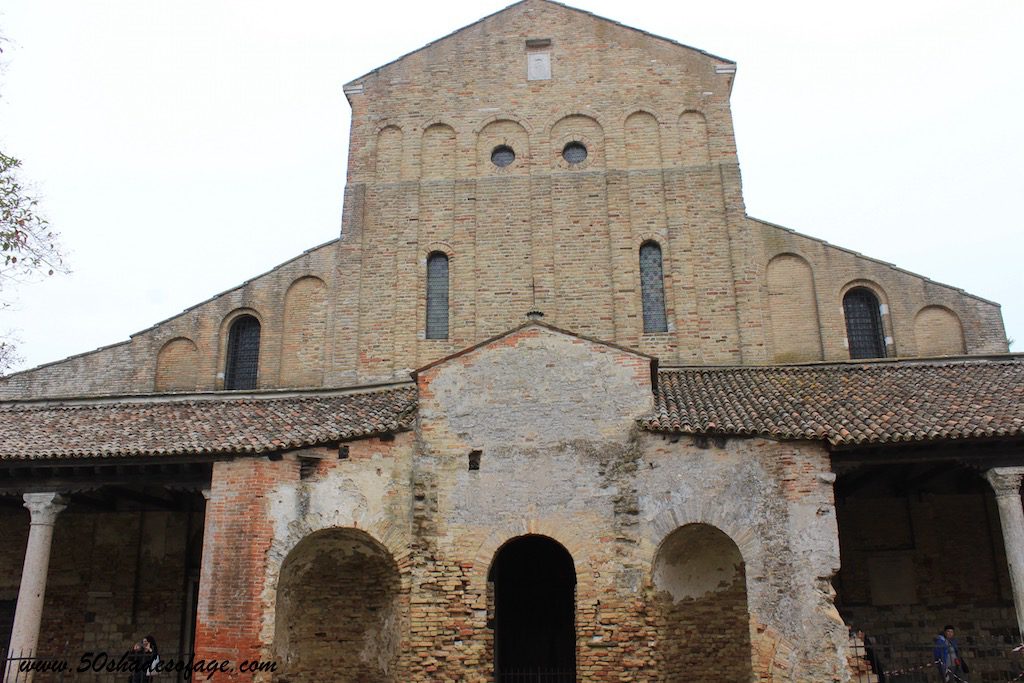 There is also a small Archaeological Museum that is located in the Palazzo del Consiglio, built in 400 in Gothic style as the seat of government of the island. On the far side there are rows of grapevines as far as the eye can see and some marble statues adorning the vineyard. 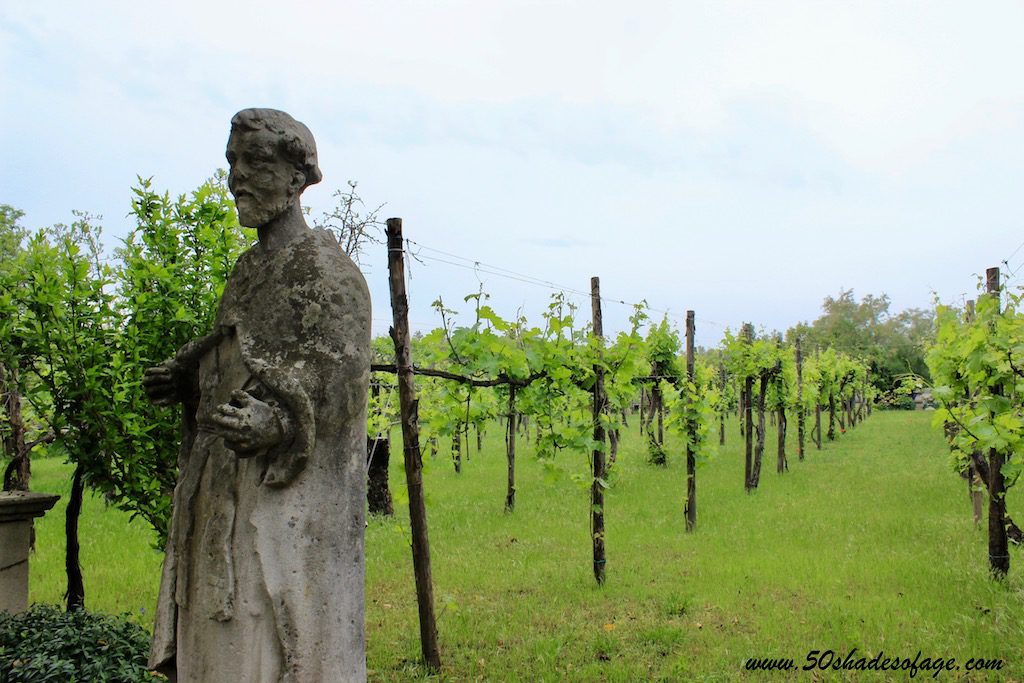 Rows of Grapevines and Ancient Statues

We had arrived at lunch time so we were all ravenous and headed towards one of the indoor-outdoor restaurants back along the path to the boat dock. There are a few to select from on the island, from a large restaurant set in a villa with glorious gardens called Cipriani to smaller pizzerias lining the canal. 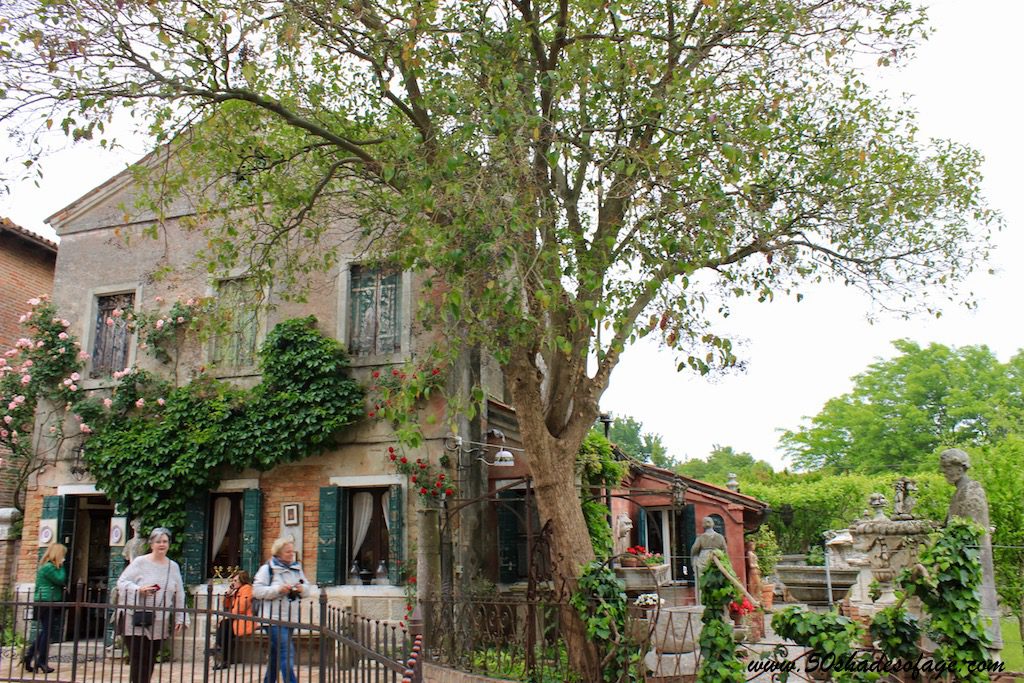 A quaint little cafe in Torcello

This green and grassy, semi-deserted island is pretty much a delightful Sunday stroll, but I found it to be the most charming out of the three islands that we visited. On our cruise back to Venice we noticed that the haze was finally lifting allowing us to capture a few clearer shots of this incredible Italian city. 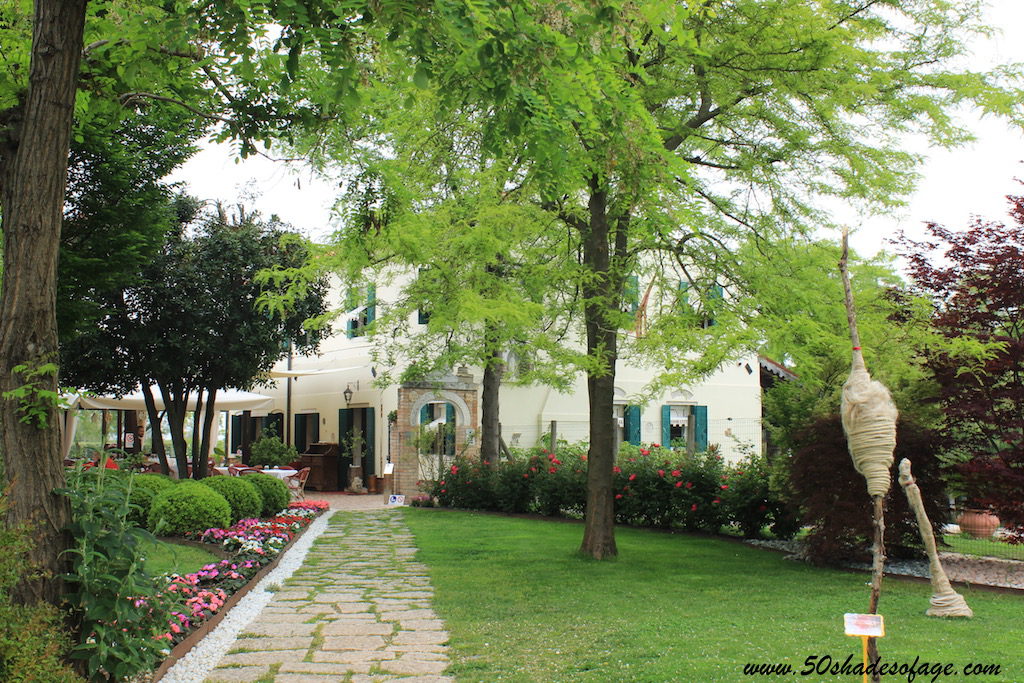 Murano, Burano and Torcello Half-Day Sightseeing Tours are available from St Mark’s Square and cost around 20 euros per person. I would highly recommend putting this tour on your Venice sightseeing itinerary.

Spread the love
BuranoIslands of VeniceItalian HolidayMuranoTorcelloVenetian IslandsVenice
By 50 Shades, August 7, 2017 Kathy was a 50 something year old when she started up this blog 6 years ago, but has since turned over another decade and is now in her early 60s. She is married with two adult children and lives on the Tweed Coast of New South Wales, Australia. Kathy enjoys living life to the fullest and loves to keep fit and active by maintaining a healthy diet and exercising regularly. Some of her interests include reading, photography, travelling, cooking and blogging! Kathy works part-time as a freelance writer but her real passion is travelling and photographing brilliant destinations both within Australia and overseas and writing about it.