The Romance of Venice 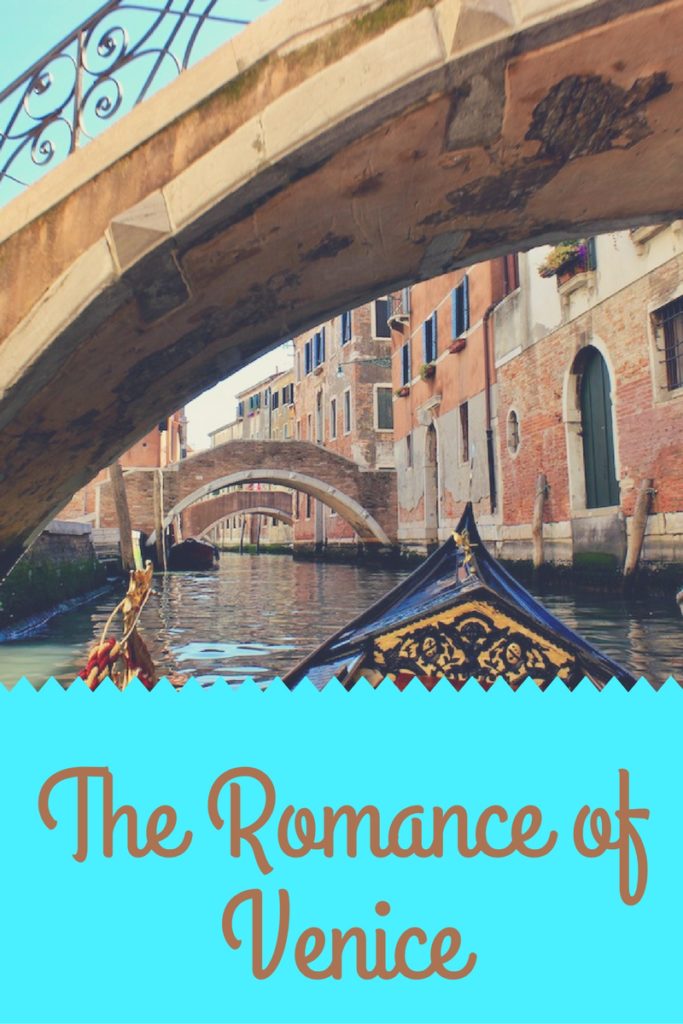 As I was being gondoliered down the canals of Venice my thoughts were certainly about romance and the beauty surrounding me. The romance of Venice overwhelmed me and for a few moments I imagined a younger version of myself being wooed and serenaded and fed oysters and champagne as I glided down the canals. It was just a silly daydream I know! But as far as Italian cities goes, Venice would be hard to beat for romance. 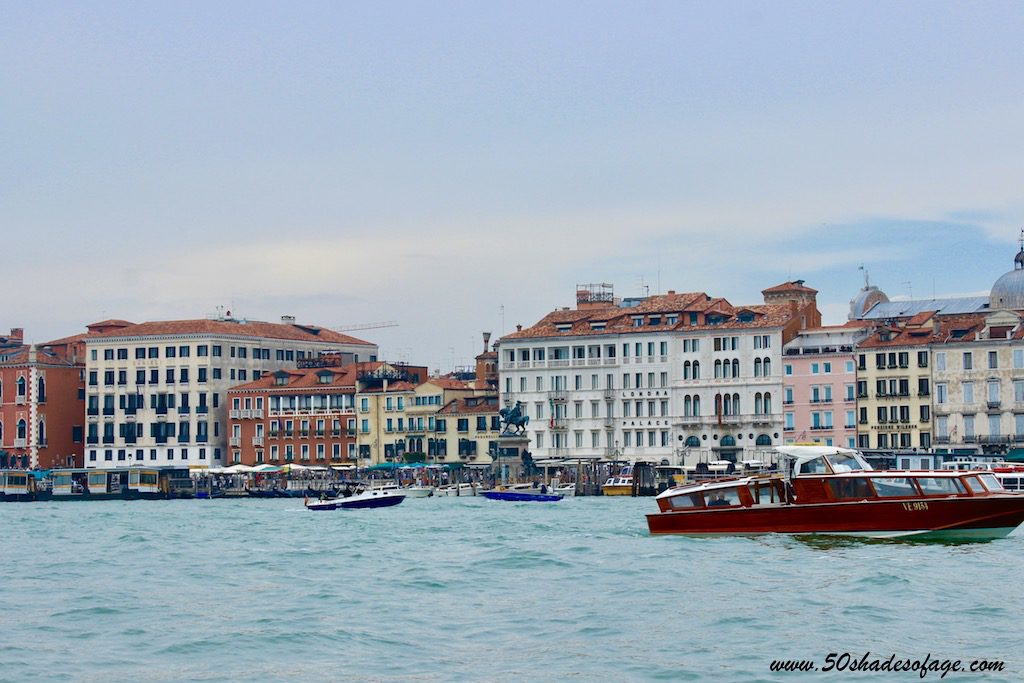 Arriving into Venice on a Water-Bus

We had spent the previous day checking out the stunning islands of Murano, Burano and Torcello and were impressed with the treasures that they revealed. On our second day in Venice we made a quick plan that involved seeing as much of the city as possible, so we set off early in the morning.

We wound our way through the narrow laneways, criss-crossed with arched bridges, and occasionally encountered a square or piazza with a cafe and always a church. 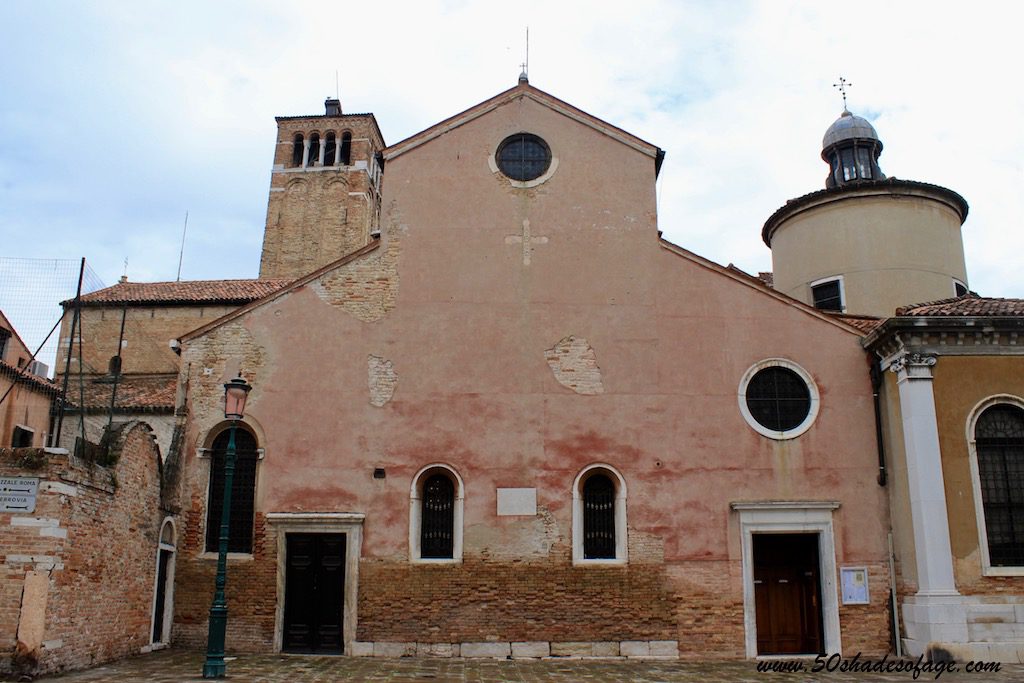 One of the many churches in a square in Venice

After what seemed a long time, we came to another open square where the smell of fish was rife. We had reached the Rialto fresh food markets and paused to take a browse. 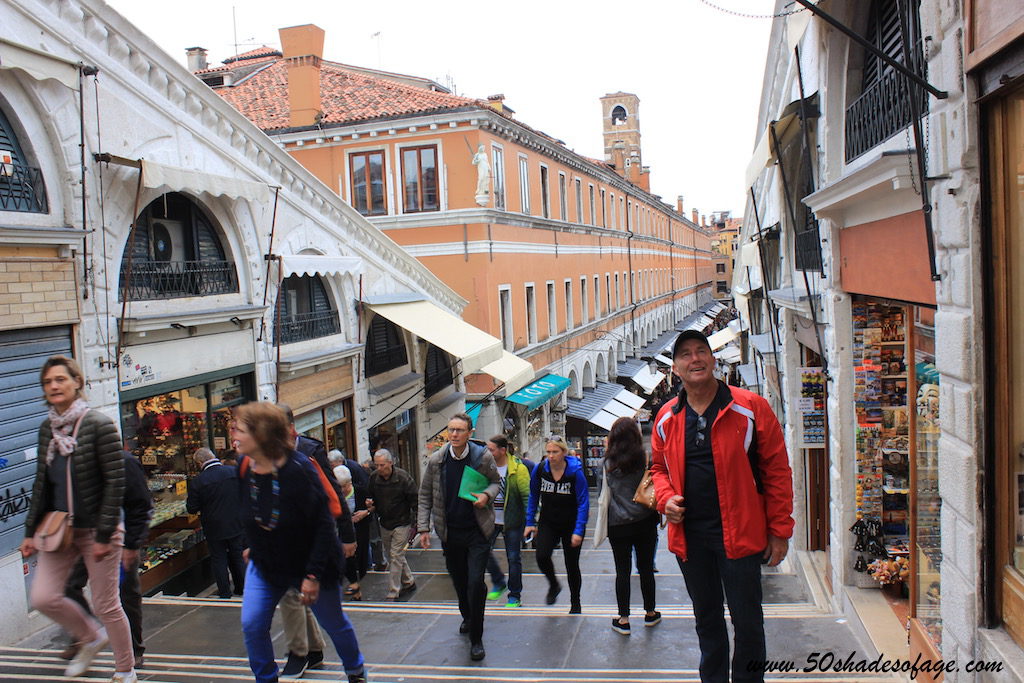 Once we hit Rialto Bridge and the Grand Canal the crowds were starting to form. This area is full of souvenir shops, leather wares, boutiques and shops selling Venetian masks. You can easily wile away a few hours here checking out the shops. 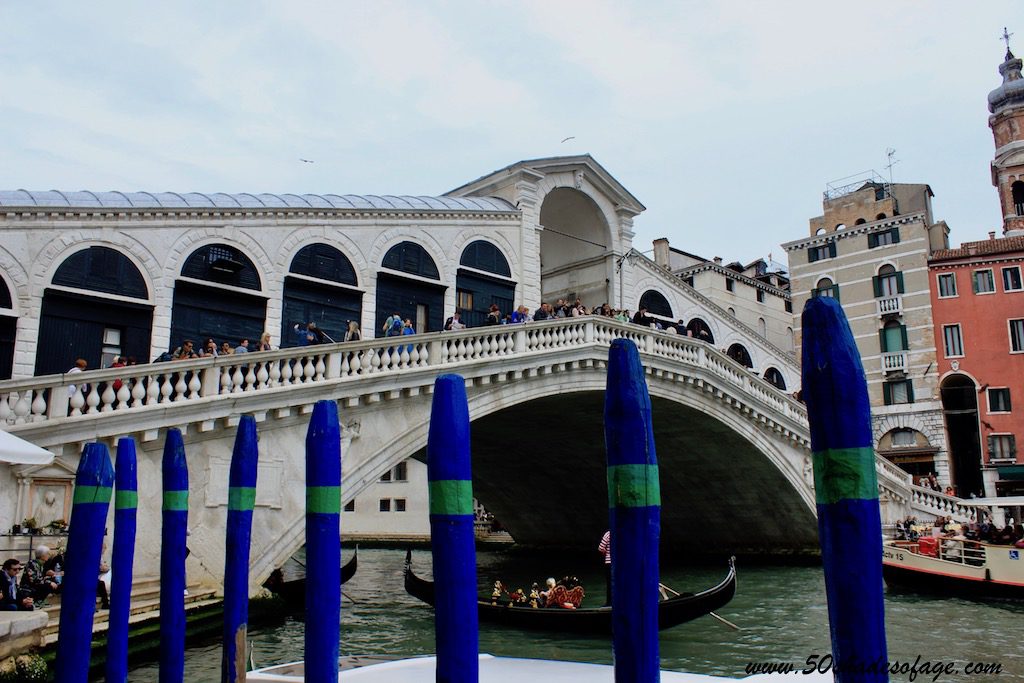 The famous Rialto Bridge in Venice

We had worked up a thirst so decided to sit for a while on the Grand Canal and have a coffee. Already the Grand Canal was a hive of activity with wooden speedboats, tourist boats, ferries and gondolas all cruising on the chopped up waters.

By the time we reached St Mark’s Square the place was jam-packed with tourists. Already the line was a mile long to enter St Mark’s Basilica and tourists were taking selfies everywhere on the piazza. We found it difficult to take photos without someone photo-bombing us and eventually gave up! 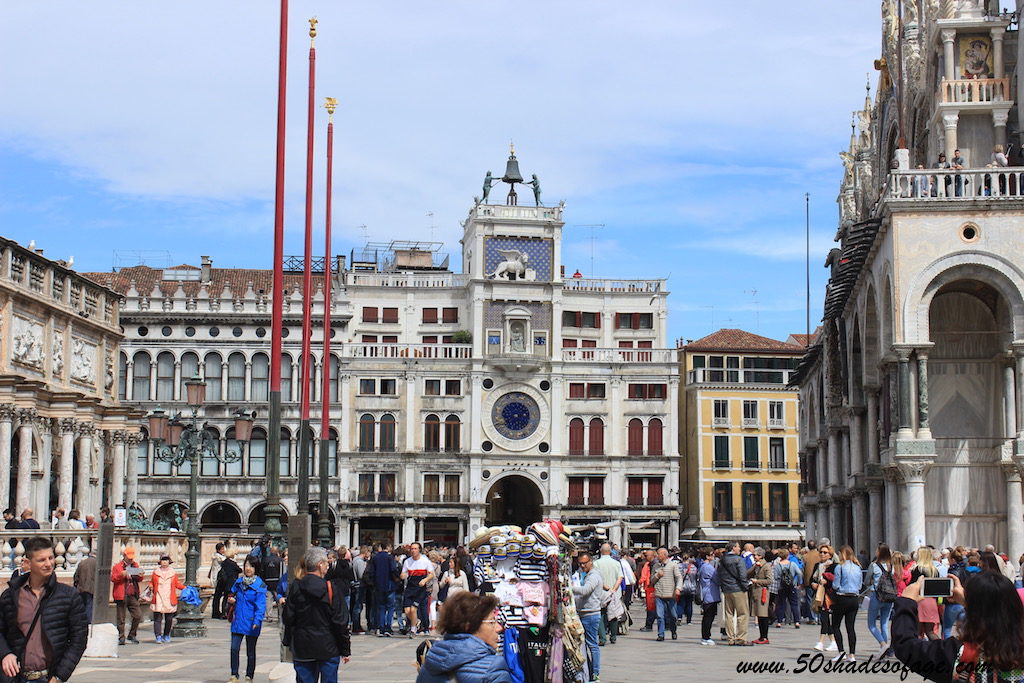 Napoleon referred to St Marks’ Square, Piazza San Marco as the ‘drawing room of Europe’ as it holds three of Venice’s most popular tourist attractions. St Mark’s basilica (Basilica di San Marco), often seen as the living testimony of Venice’s links with Byzantium; Doge’s Palace, once Venice’s political and judicial hub; and Torre dell’Orologio, a clock tower built between 1496 and 1506, that are, not just the square’s, but some of the city’s main attractions. 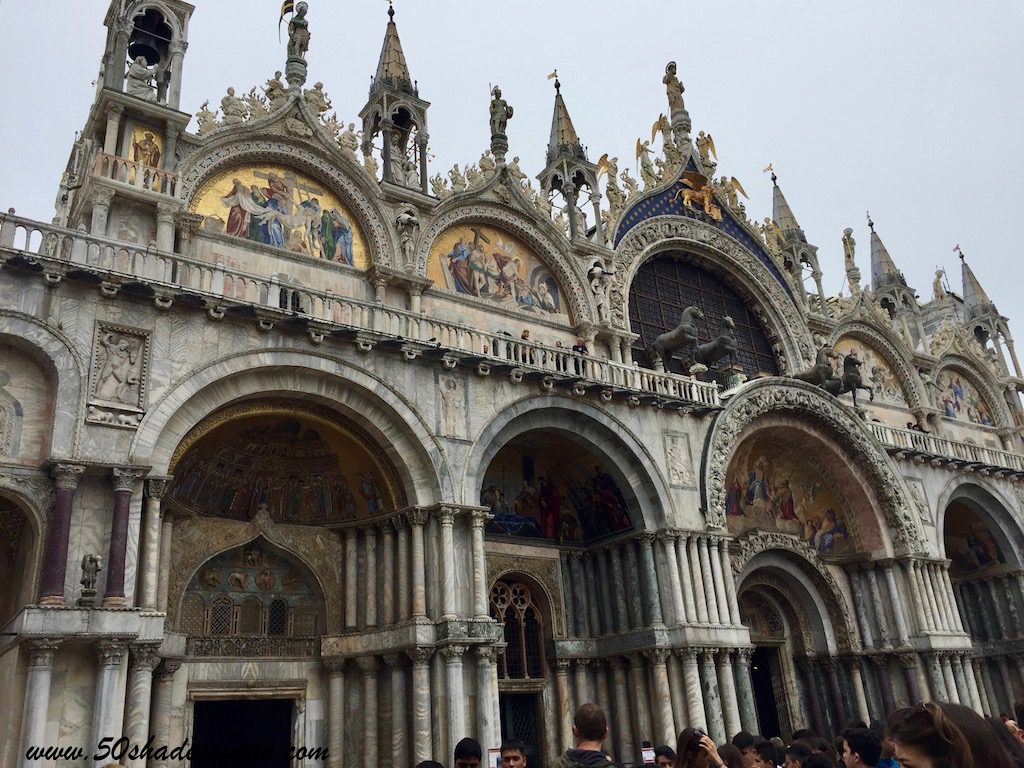 The facade of St Mark’s Basilica 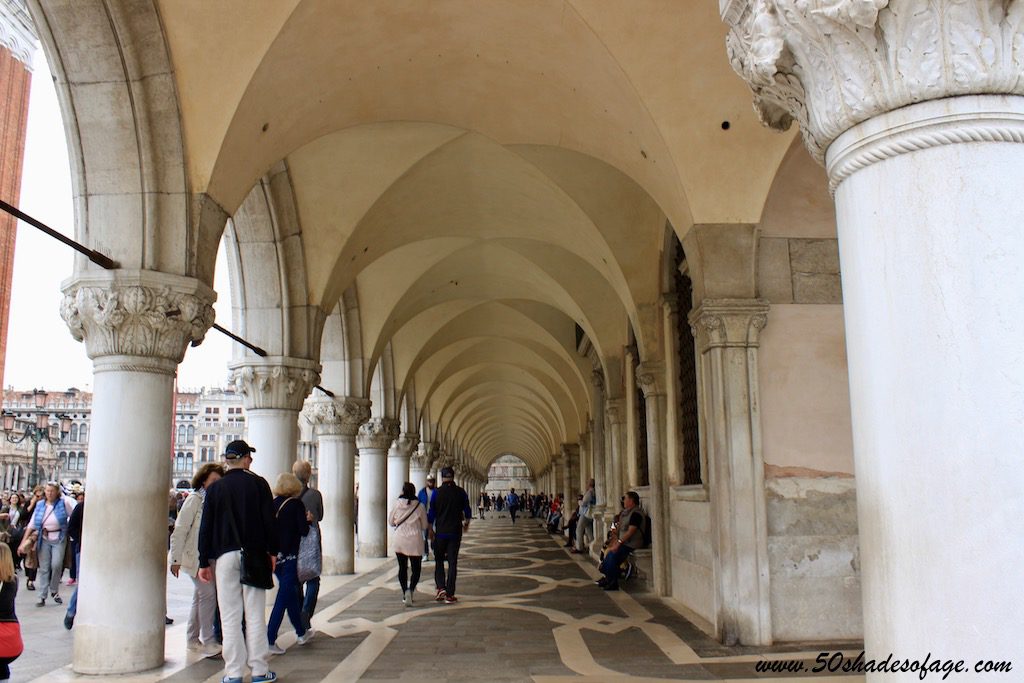 The colonnade of Doges Palace

My wish was to see Doge’s Palace, a palace built in Venetian Gothic style, which is now a museum. The line into the palace didn’t appear to be too long so I joined the queue. During the prosperous centuries of the Venetian Republic, the city’s magistrates, or doges, ruled the city like royalty. The Palazzo Ducale or Doge’s Palace was not only the residence of the doge but the city’s centre of power and its administrative hub. 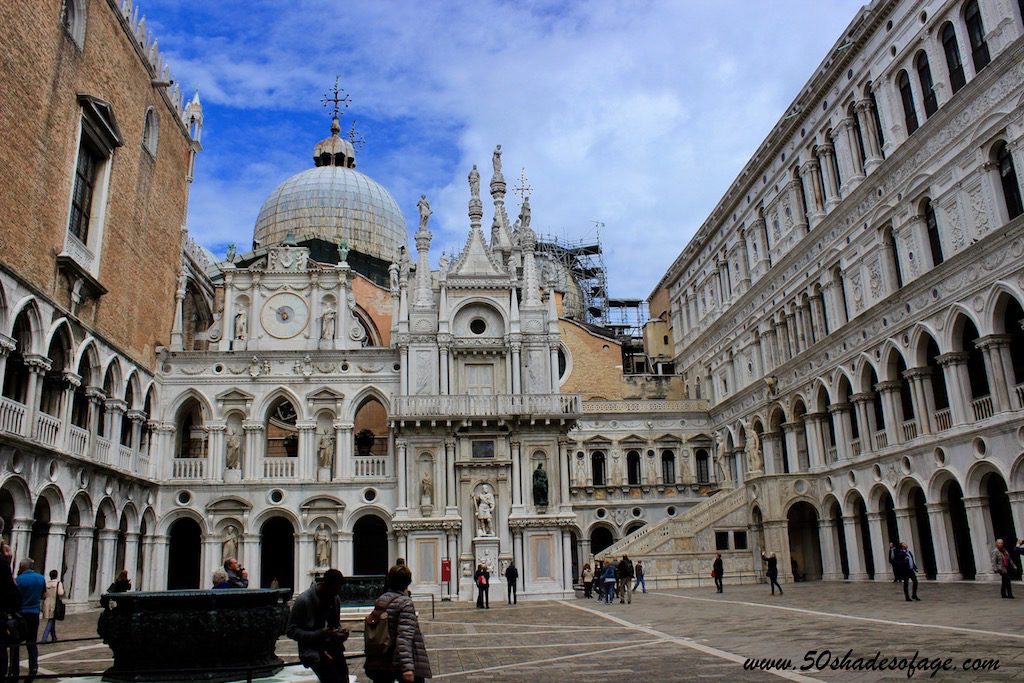 The Courtyard in Doges Palace

The building was constructed in two phases. The eastern wing, which faces the Rio di Palazzo, was built between 1301 and 1340. The western wing, facing the Piazetta San Marco, took an additional 110 years to build and was completed in 1450. 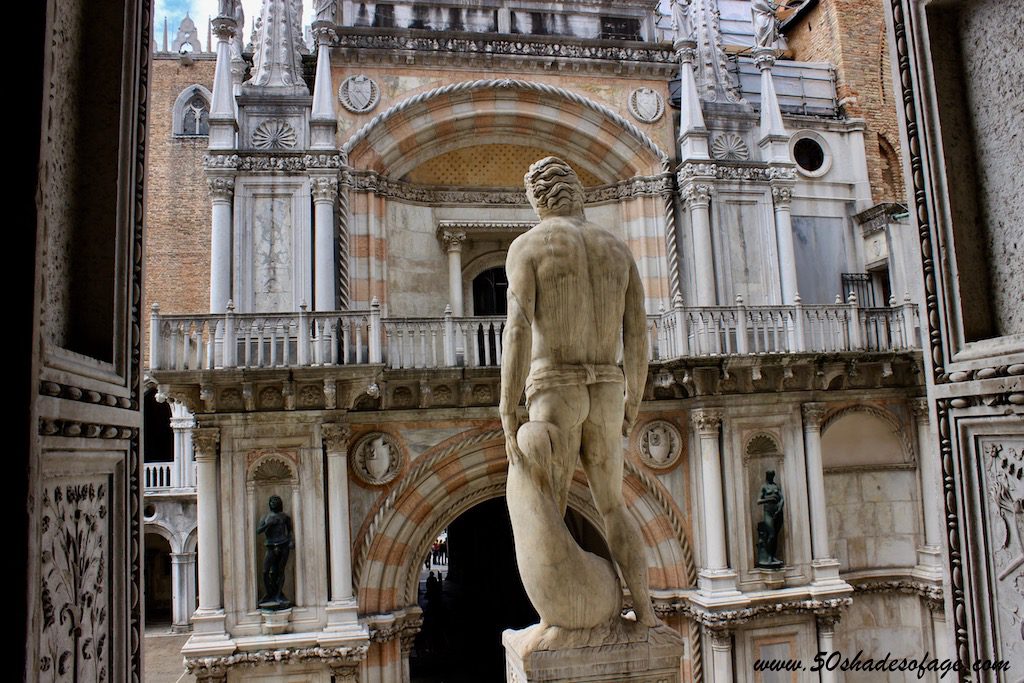 I wandered through the palace with my head permanently tilted back gazing above at the ornate frescoed ceilings and then as I entered each chamber there were huge masterpieces on canvas dating back centuries ago. 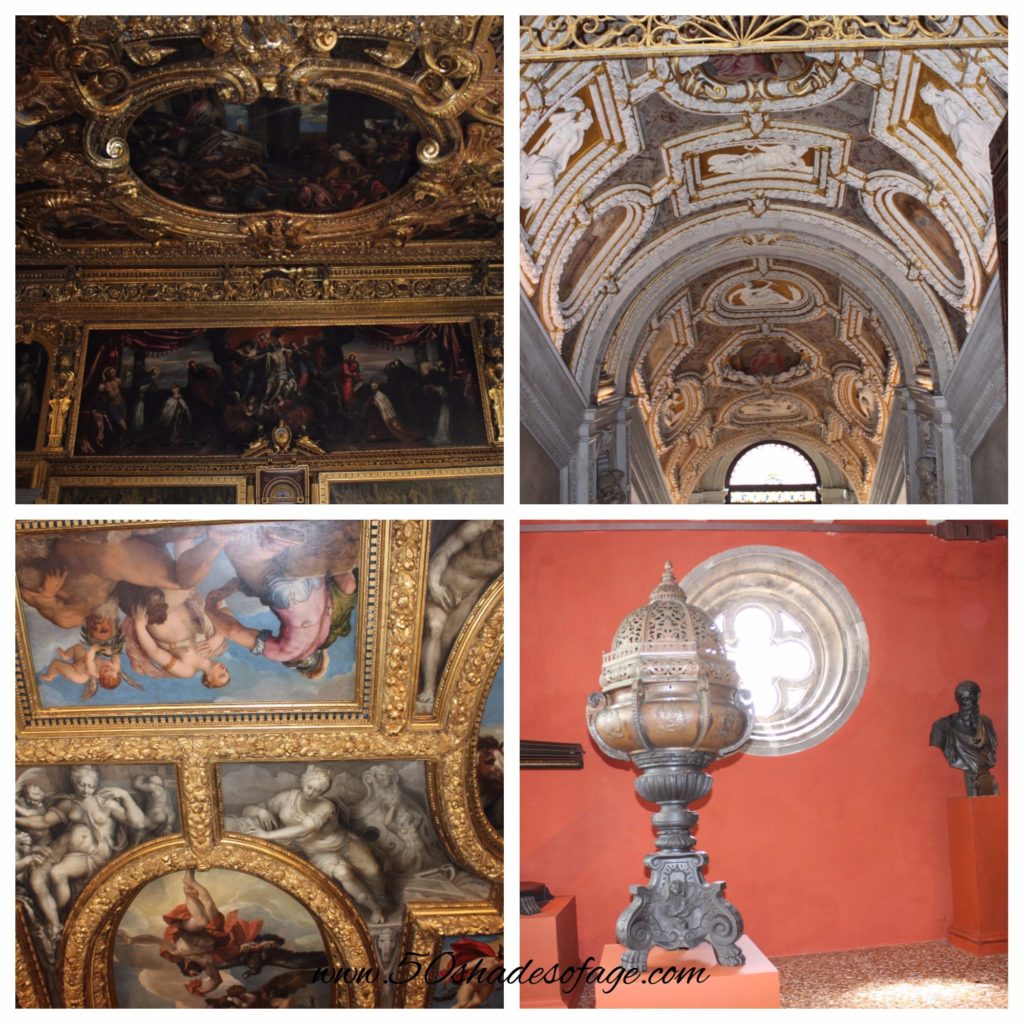 Some of the artwork in Doges Palace

Once I’d had my fill of art and opulence I entered a narrow passage that led me to the Ponte dei Sospiri – the Bridge of Sighs. The beautiful enclosed Baroque arch bridge connects Doge’s Palace with the first floor of the prison that belies a grim past. 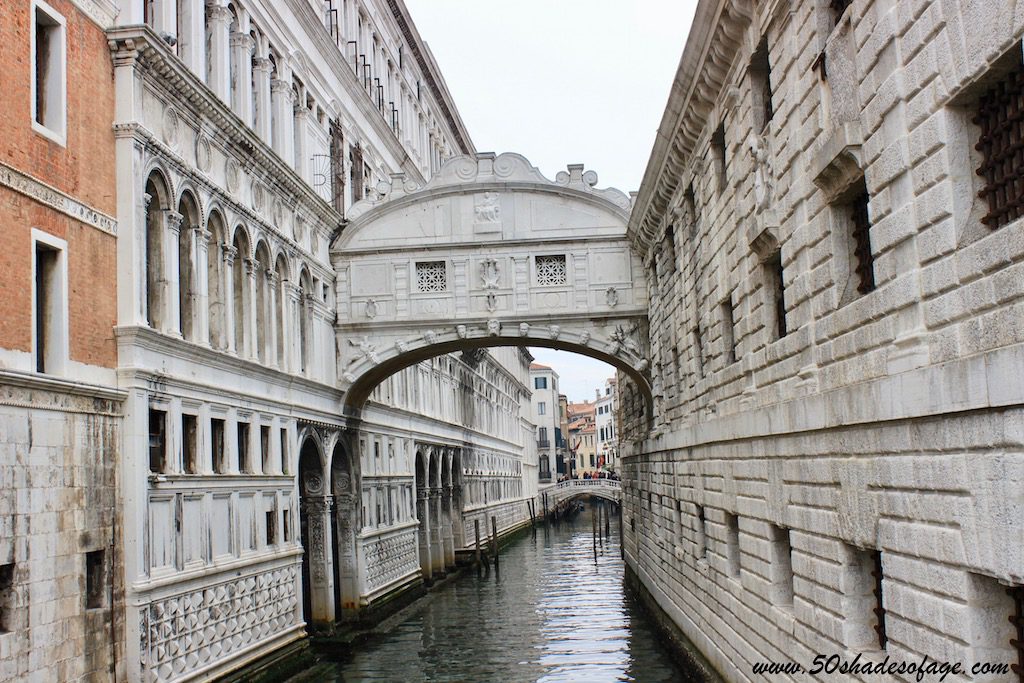 Bridge of Sighs at Dogues Palace

It was through the stone grillwork of this bridge that prisoners caught their last glimpse of Venice as they were taken before the judges for sentencing, then to prison or worse. 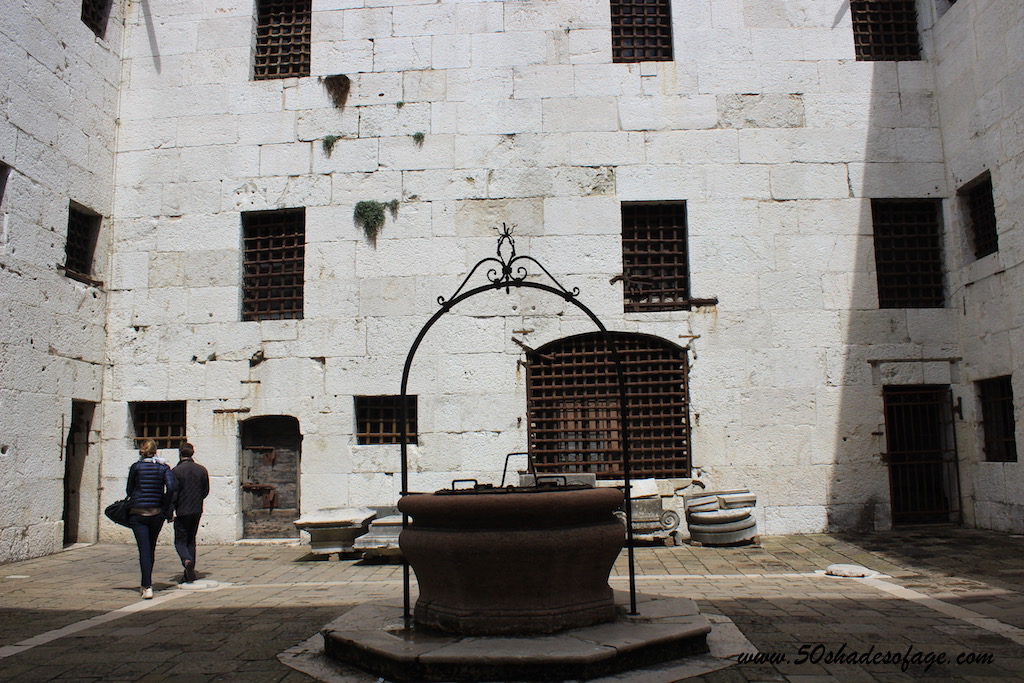 These attic prison cells are also renowned for the Venetian lover-boy Giacomo Casanova, who once made a famous escape from within.

After I re-surfaced from Doge’s Palace, with an extremely impatient husband waiting, we set off back through the maze of canals and streets looking for somewhere to eat lunch. We ended up at scenic cafe along the Grand Canal, not far from Rialto Bridge. 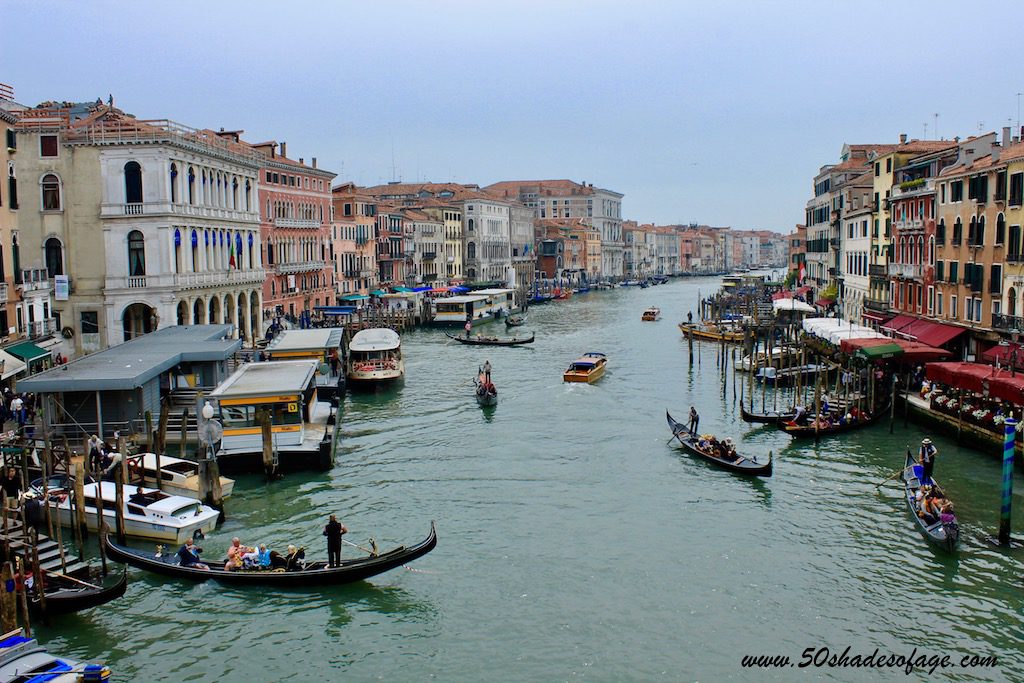 The Grand Canal in Venice

Lined with the palazzos of the Venetian ruling classes, many of them now hotels, the lagoon city’s watery main street is one of the highlights of any visit. The fairytale atmosphere of the Grand Canal is simply breathtaking. Sipping on a apertif of an Aperol Spritzer and sharing an anti pasta platter of Italian delicacies, we wiled away an hour or two, resting our weary legs. 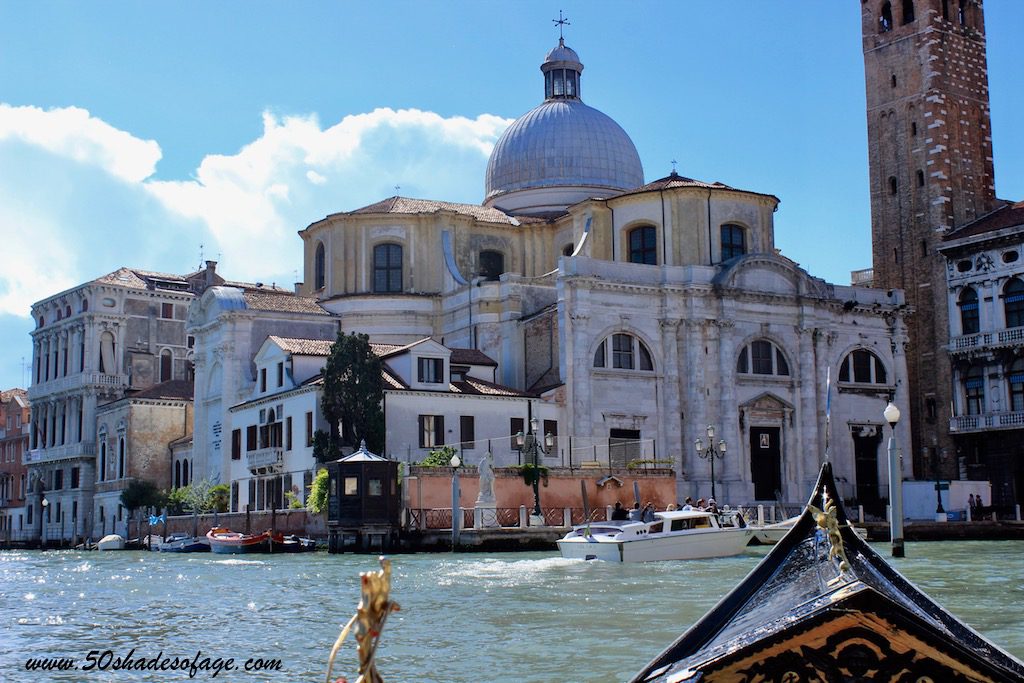 Some of the sights on the Grand Canal

One of the best ways of seeing Venice, apart from walking, is to jump aboard a Vaporetto or Water-Bus that runs the length of the Grand Canal and is the ideal equivalent to a city bus tour. 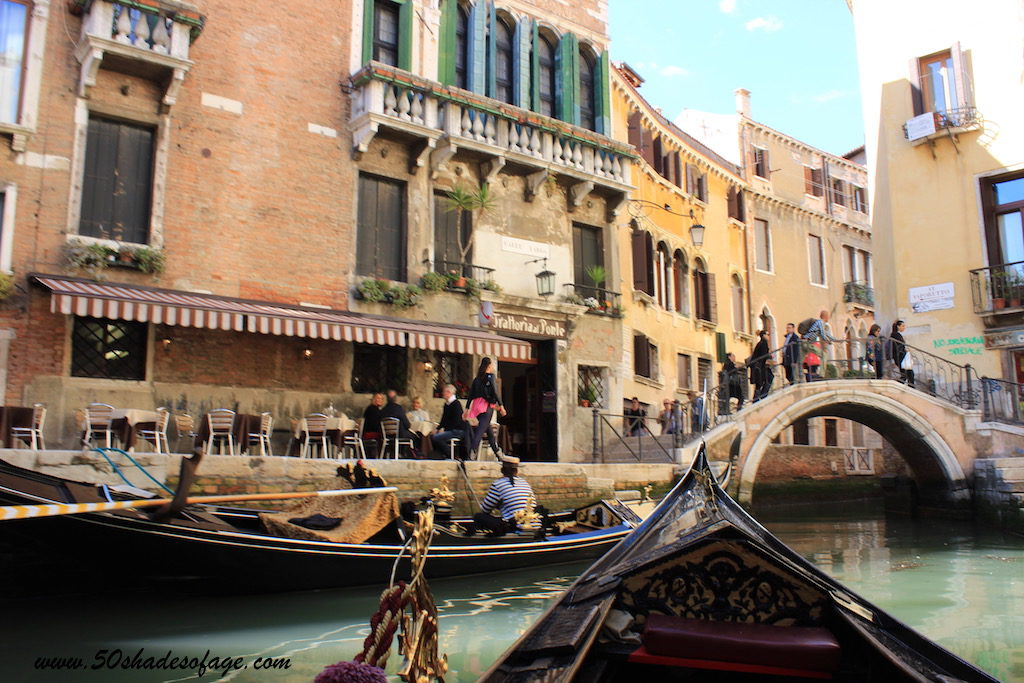 Cruising the canals of Venice in a Gondola

The throng of boats going every which way, mixed with gondolas all seems to work in harmony, incredibly! After some refreshment and food we decided we would join in with the on-water activities and found ourselves a gondola boat. Although an expensive indulgence at 80 euros a pop, we thoroughly enjoyed this experience, that if truth be told, is just something you have do whilst in Venice! 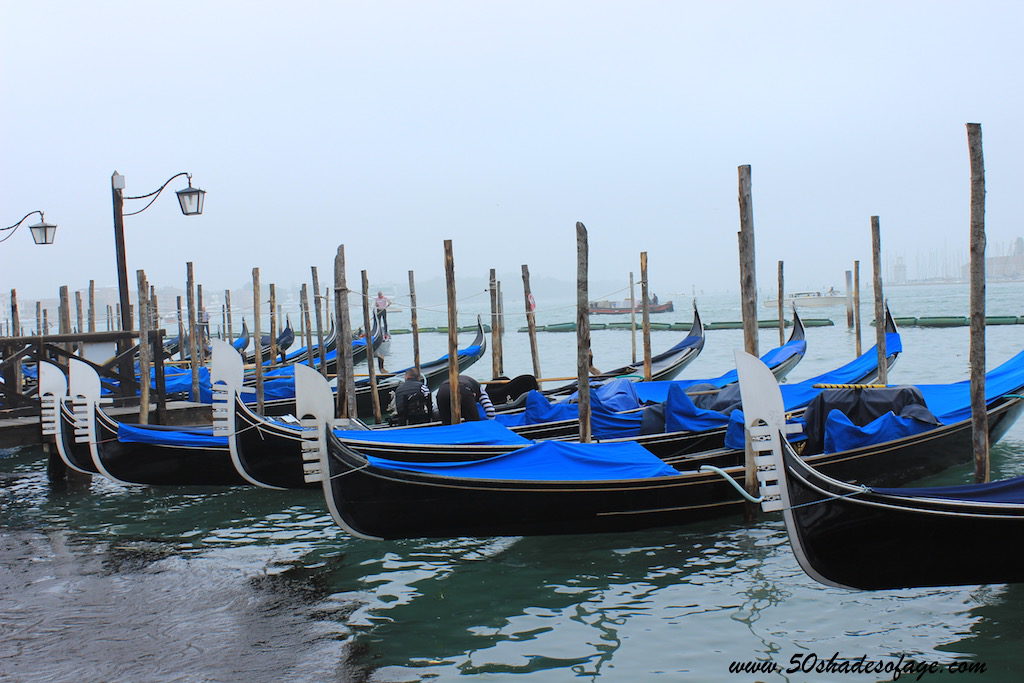 Get Lost in Venice

We found one of the most enjoyable things to do in Venice was hands down just wandering aimlessly through its streets and alleys and getting lost. If you only have a day in the city, like we did I’d recommend that you do this before you set foot inside a single museum or attraction. 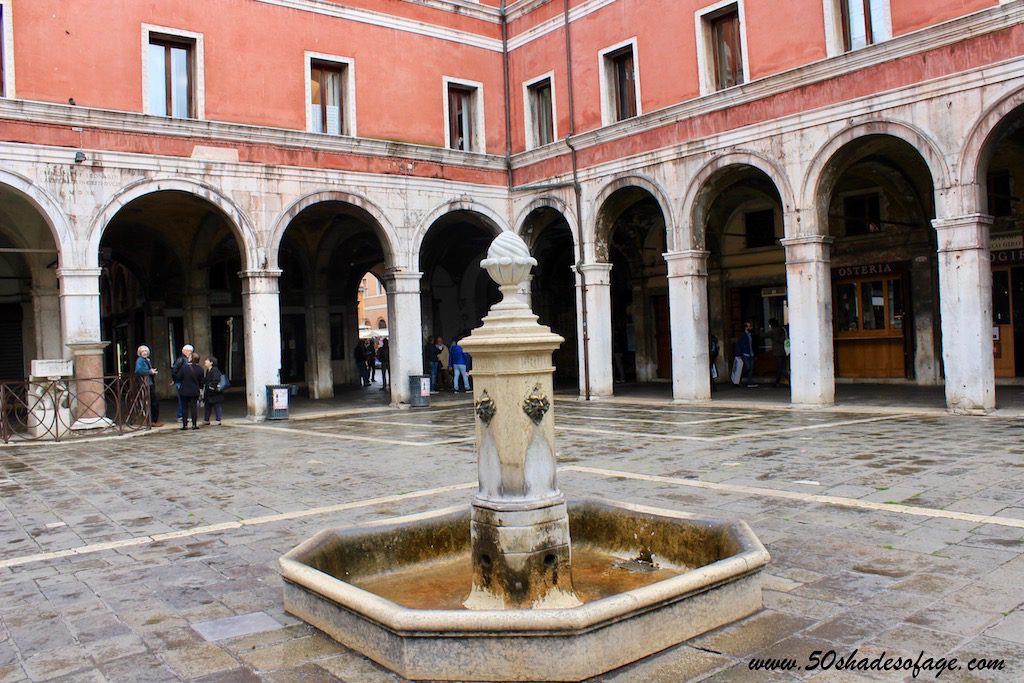 One of the piazzas in Venice

By wandering (especially if you point yourself in the exact opposite of the direction where the herd is going) you can find Venice’s many charming and often-empty squares and streets, which goes a long way toward helping you appreciate the city. 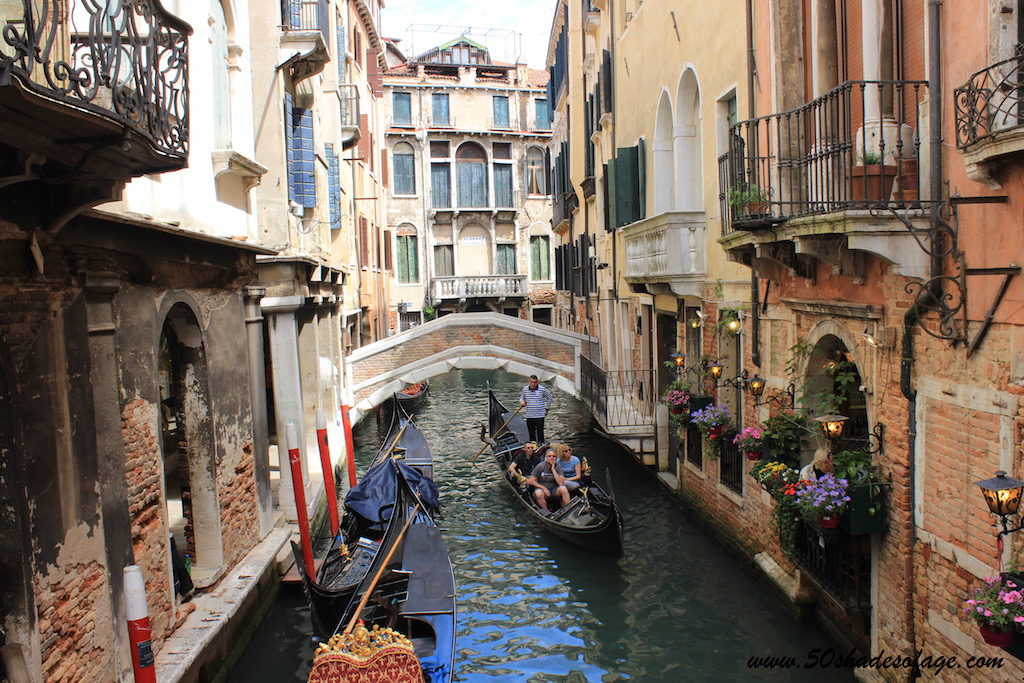 The Canals of Venice

Check out the many shops that make and sell exquisitely crafted Venetian masks. These mysterious, disturbing Venetian masks, eyeing you from the city’s alleyways are part of what I imagine the Venetian world would have been like 300 years ago. Thousands of tourists flock to Venice annually to see and take part in its magnificent Carnival; walking round in fancy dress and masks in this city’s magical scenery. 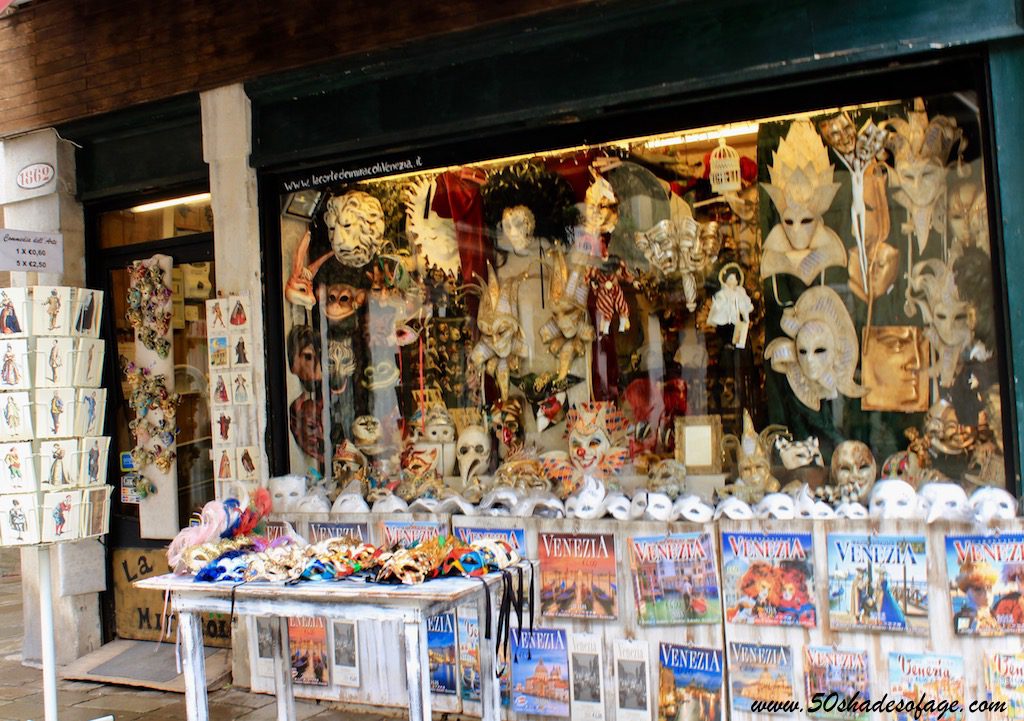 One of the many shops in Venice selling masks

Where we stayed in Venice

Our accommodation for our two nights in Venice was at the Hotel Abbazia, a bed and breakfast offering newly renovated rooms created from the former monastery of the Frati Carmelitani Scalzi (barefoot Carmelite friars) of Venice. The B&B was well located near the Train Station and the Grand Canal, Ponte degli Scalzi, shops, cafes and restaurants. It also had a beautiful courtyard and garden at the back of the hotel where you could sit and enjoy the peaceful garden and sunshine. 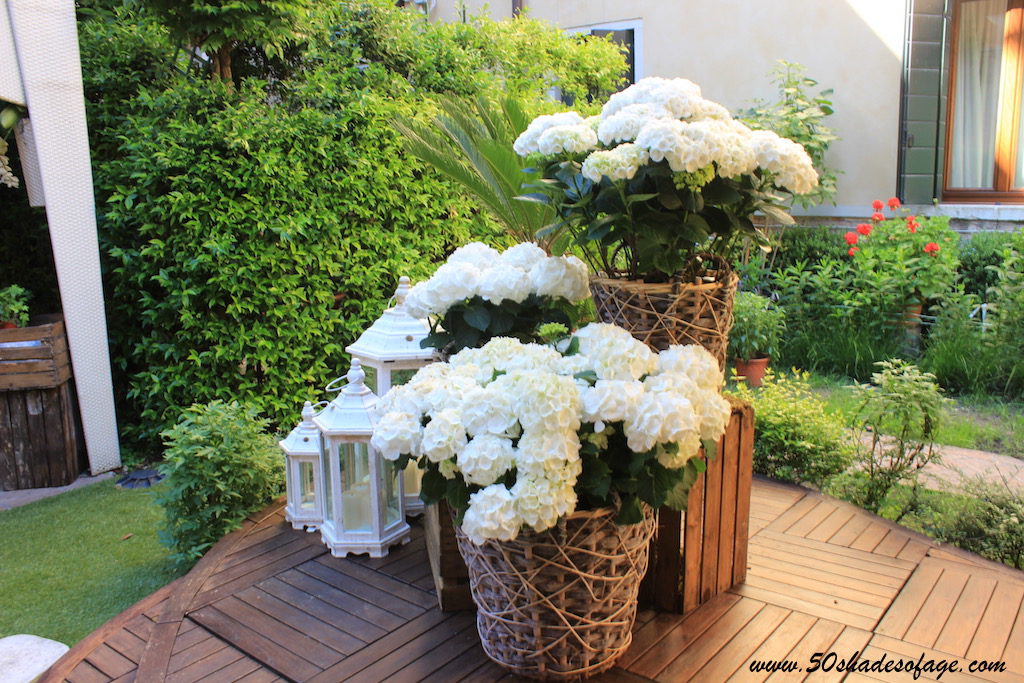 The pretty potted flowers in the courtyard of the Hotel Abbazia

We only touched the surface of this picture postcard city of stunning architecture and classic artwork.  I could have easily lost myself here for a few more days. The romance of Venice is one Italian experience that will stay with me for the rest of my days.

Spread the love
Grand Canal VeniceItalian HolidayRomantic VeniceSt Mark's SquareVeniceVenice CanalsVenice Gondola
By 50 Shades, August 14, 2017 Kathy was a 50 something year old when she started up this blog 6 years ago, but has since turned over another decade and is now in her early 60s. She is married with two adult children and lives on the Tweed Coast of New South Wales, Australia. Kathy enjoys living life to the fullest and loves to keep fit and active by maintaining a healthy diet and exercising regularly. Some of her interests include reading, photography, travelling, cooking and blogging! Kathy works part-time as a freelance writer but her real passion is travelling and photographing brilliant destinations both within Australia and overseas and writing about it.