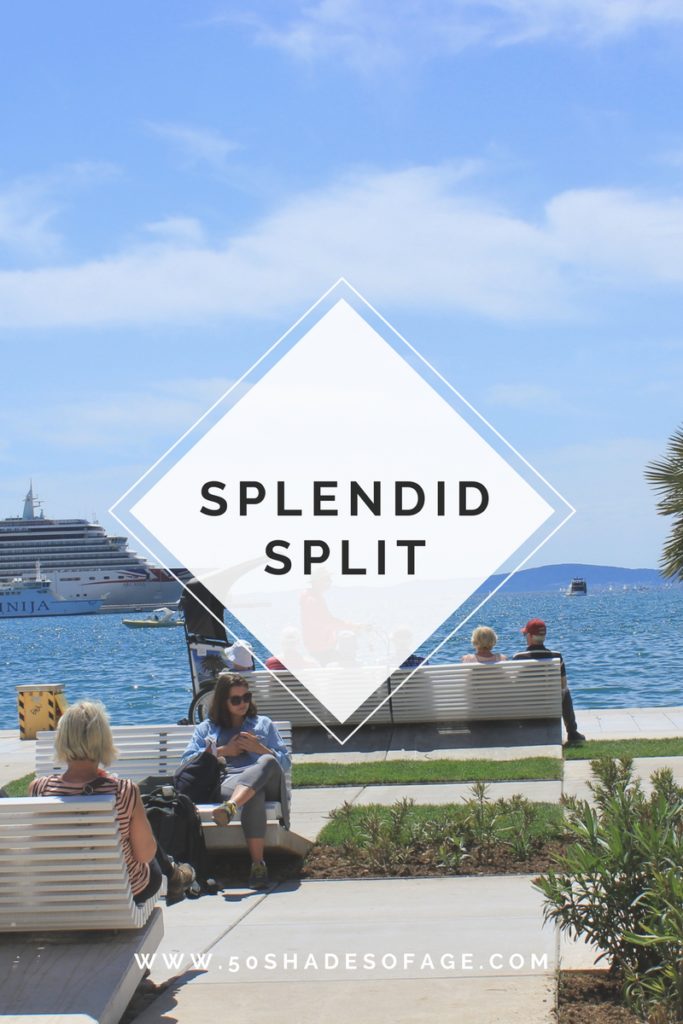 It was a very special day when we sailed into the port of Split in Croatia. My husband was celebrating his birthday so we all gathered for a champagne breakfast on the ship prior to disembarking for the day in Split. We presented the captain’s hats that the three men had to wear for the day to mark the occasion and set off on our merry way. Splendid Split was a sight to behold from the waterfront and was only a short walking distance away from the cruise port. 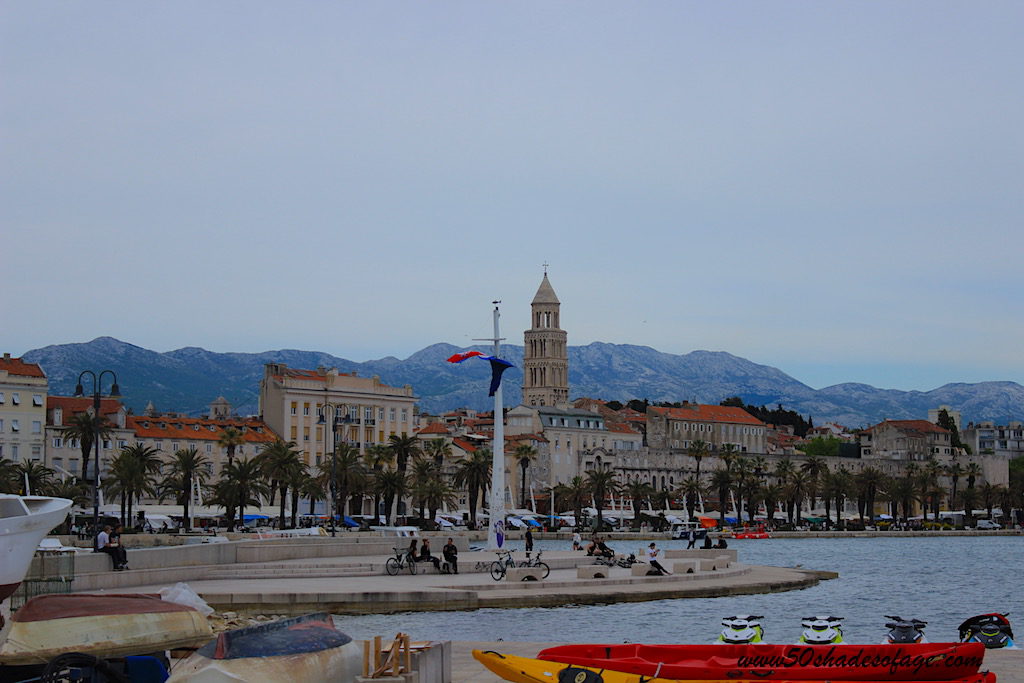 Split is located on Croatia’s Dalmatian Coast and is renowned for its beaches, numerous shops, bars and cafes. The centrepiece of this waterfront town consists of the remains of the 4th century Roman Diocletian’s Palace, with more than 200 buildings. 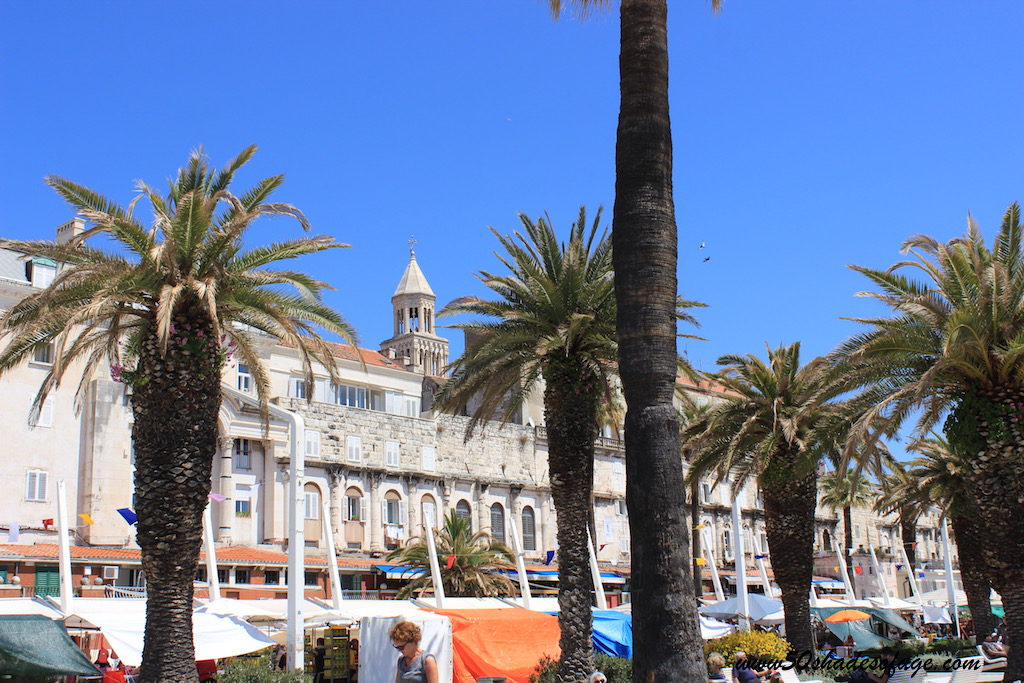 Dicocletian Palace and the Promenade in Split

Whilst one couple set off to do a walking tour, the remaining four of us decided that we would like to find a beach and maybe have a swim. We headed to Bacvice beach where there were cafes and bars lining the beachfront and the deck chairs were lined up in rows.  At 10 euros a pop we quickly decided we would sit on the gravelly sand on the shores of the beach, whilst the boys had a dip. 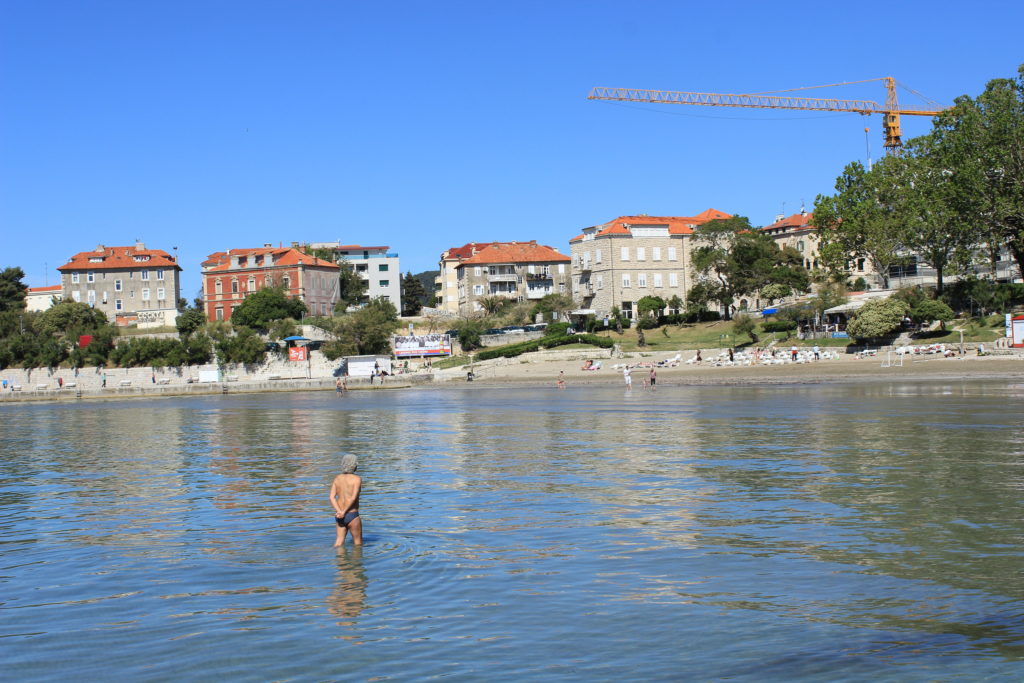 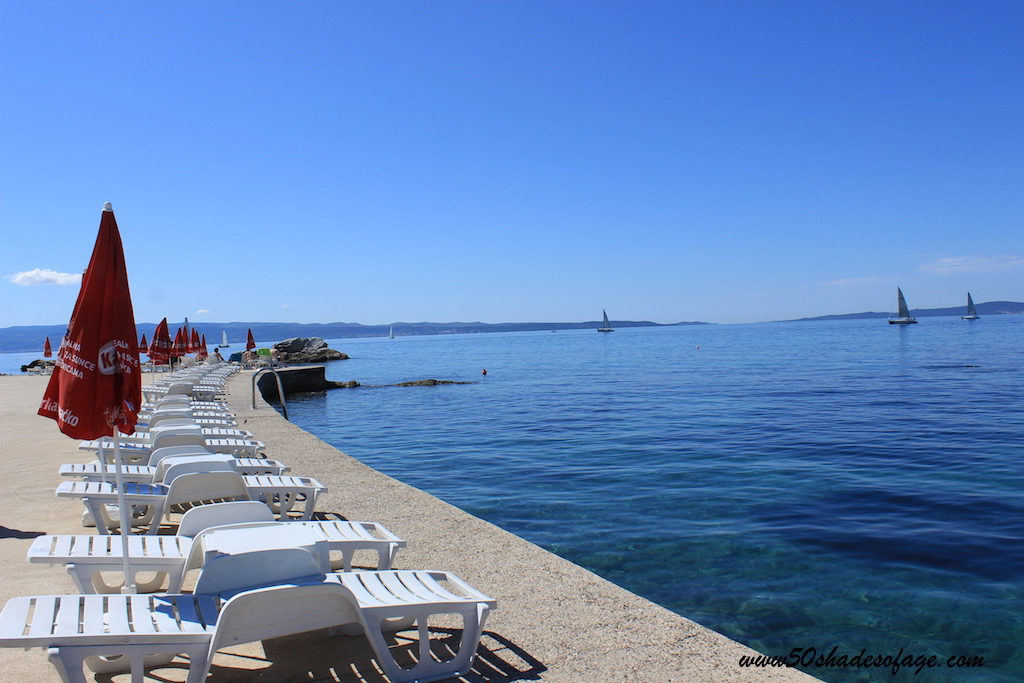 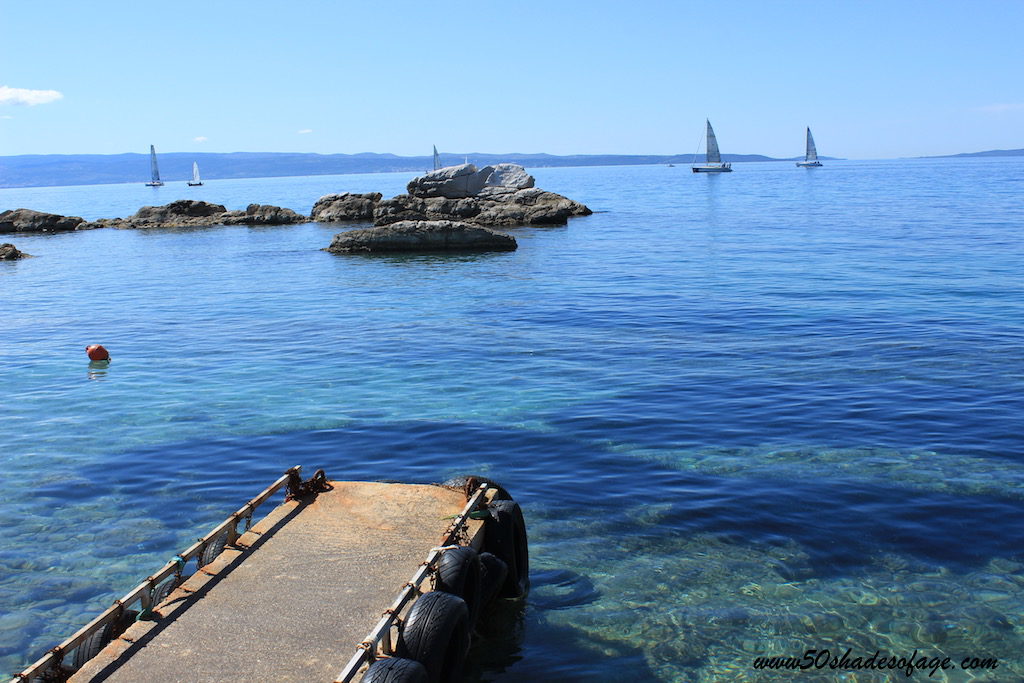 A small pier at Bacvice Beach

After the boys had dried off a little in the warm Dalmatian sunshine we strolled back towards the centre of the city. Being a Sunday, the promenade along the waterfront was abuzz with colourful markets, cafes and bars bursting with patrons and visitors enjoying the warm sunshine on the seating along the waterfront. 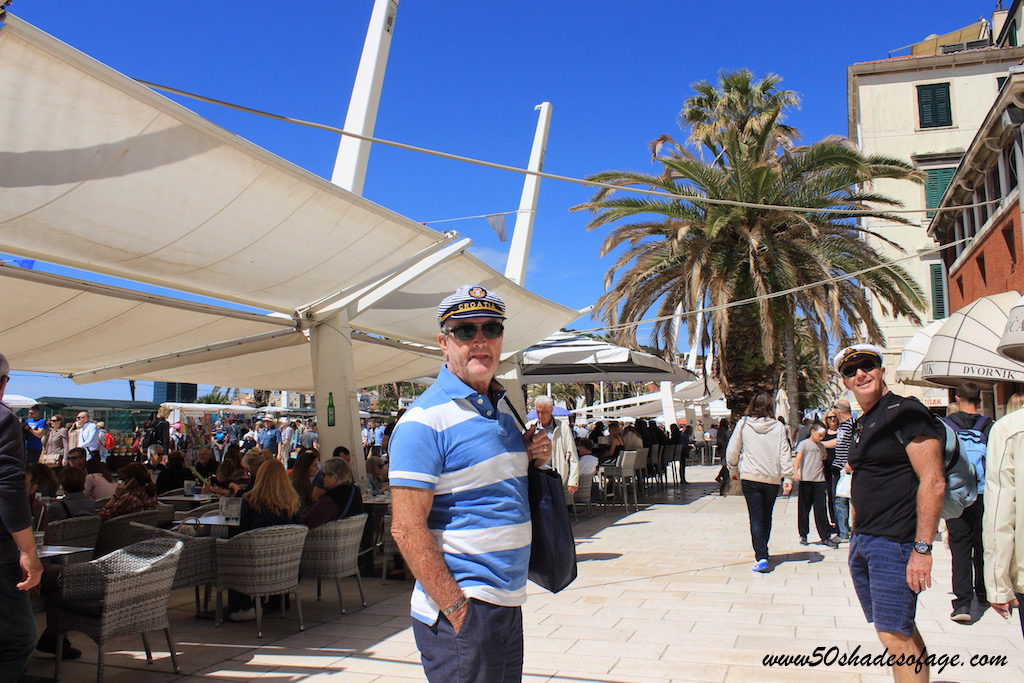 The Riva (Promenade) in Split 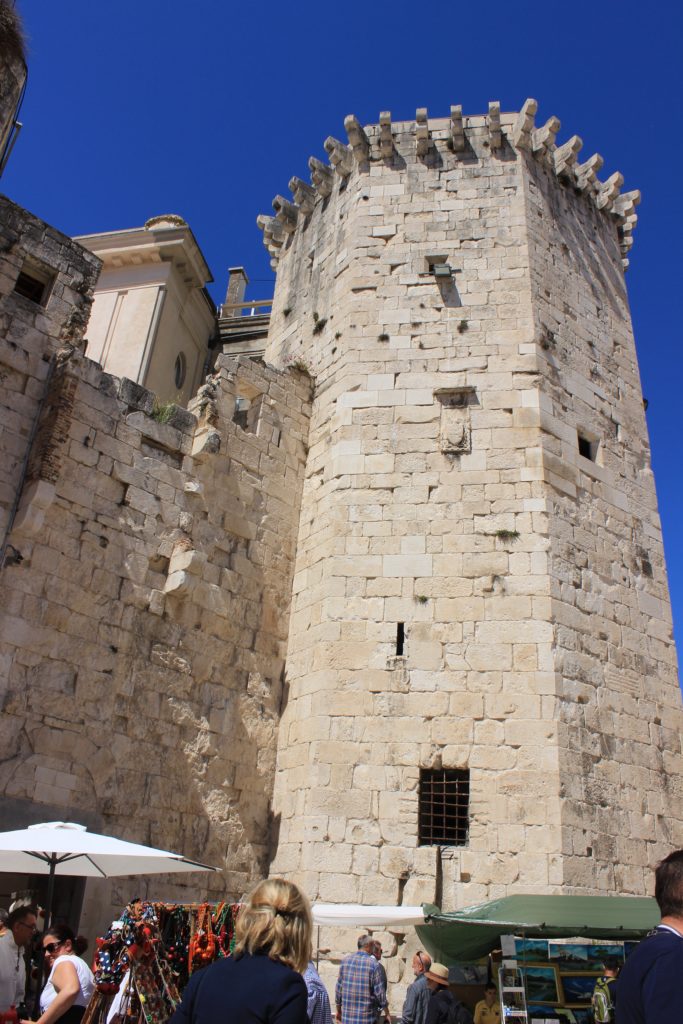 One of the towers of the Old Fortress/Palace

After a stroll down the promenade we entered the walls of the so-called Diocletian Palace ruins that lie in the heart of the city of Split. This palace is a massive structure built from local limestone and white marble. The complex contained not only the palace itself but also buildings, intended for housing military garrison and occupies around 30,000 square metres. 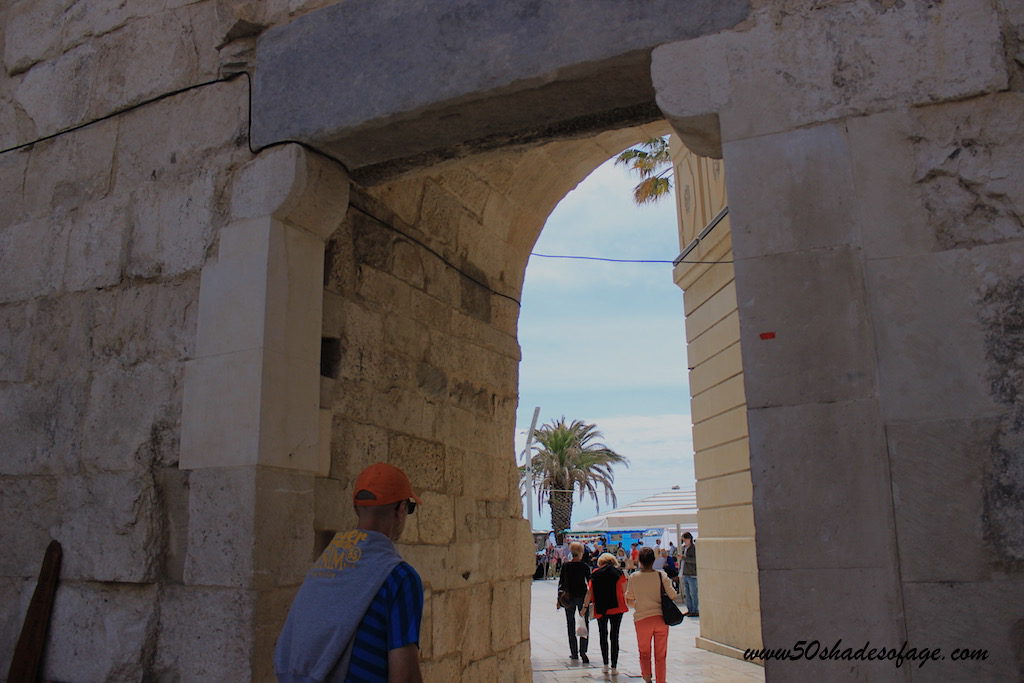 One of the Palace entrances 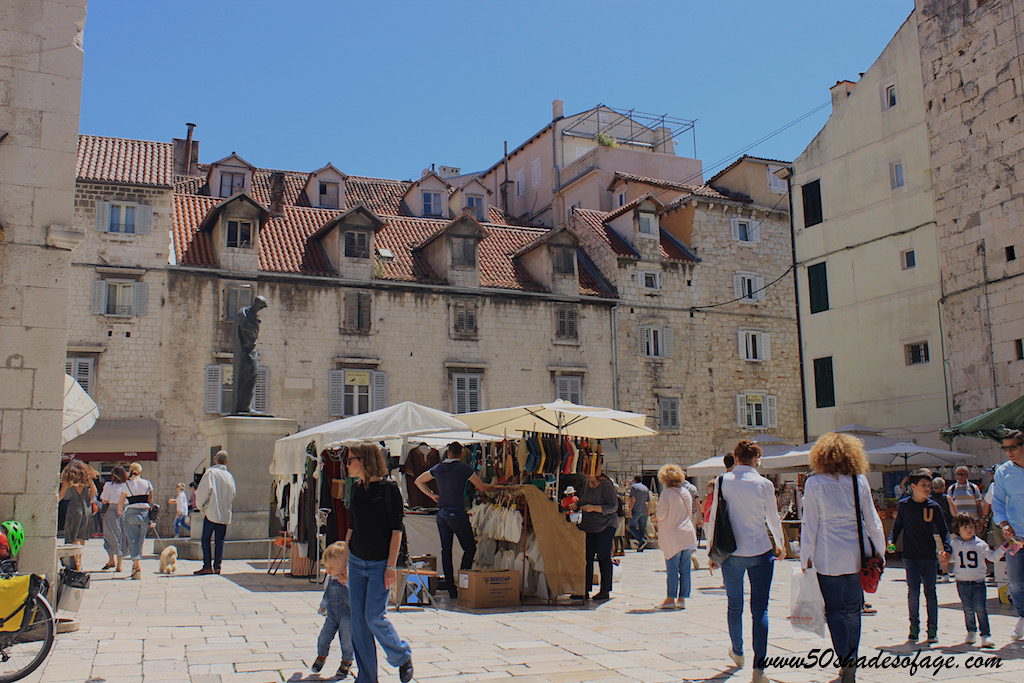 Inside the Palace Walls

The ancient fortress has become the old town of Split, with numerous shops, cafes, restaurants and also apartments, located in the old buildings on narrow streets of the palace/fortress. There is a large model outside the palace that shows the original layout of the fortress city. 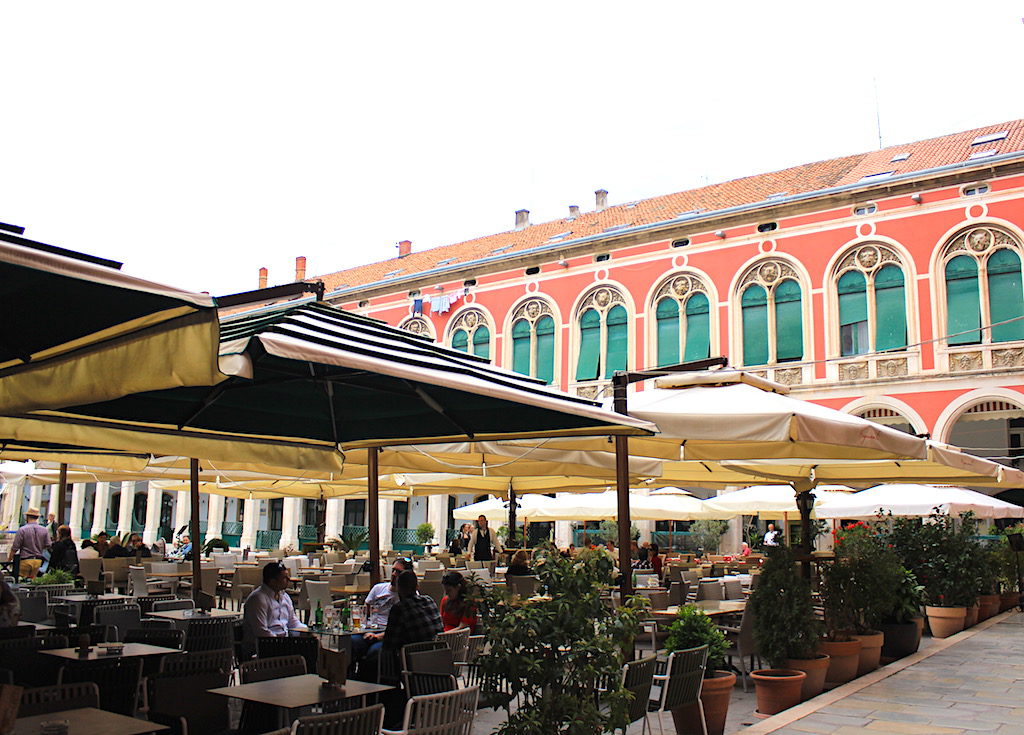 Restaurant inside the Palace walls

While the boys were sampling some local ales at a brewery in the old palace grounds, we girls enjoyed the Sunday markets. The markets were in full swing along the paved area outside the palace, along with some more stalls setup within the palace walls. The markets sold local craft such as lace, jewellery, leather goods and wooden toys. 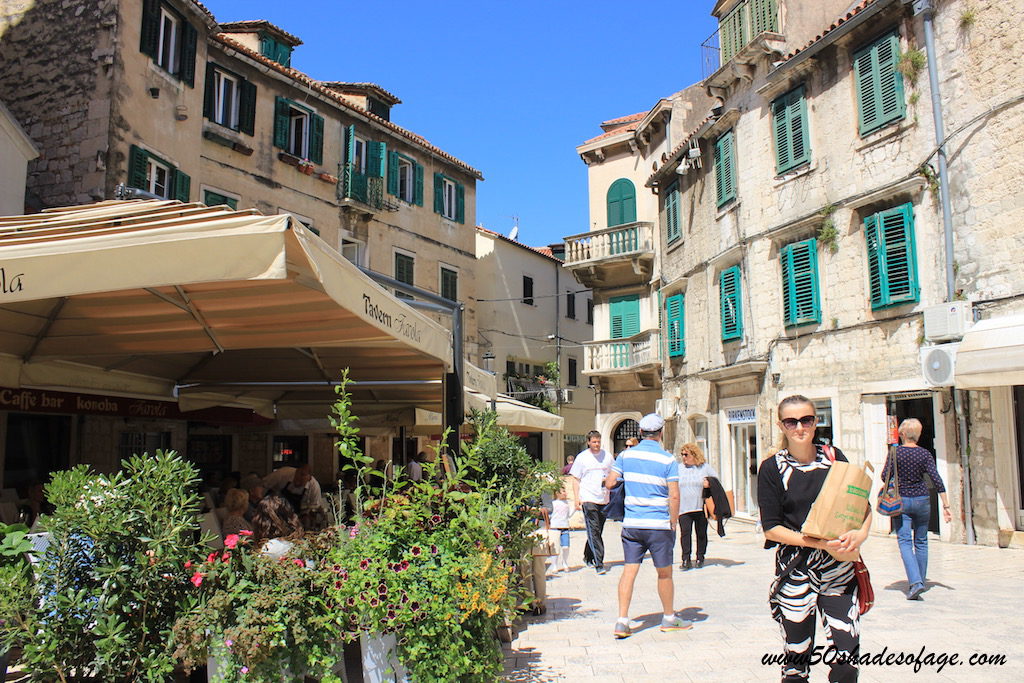 On the west side of the riva (promenade) there is Republic square, church of St. Francis and a lovely fountain. The rest of the old city is covered with white stone buildings of different periods and styles. 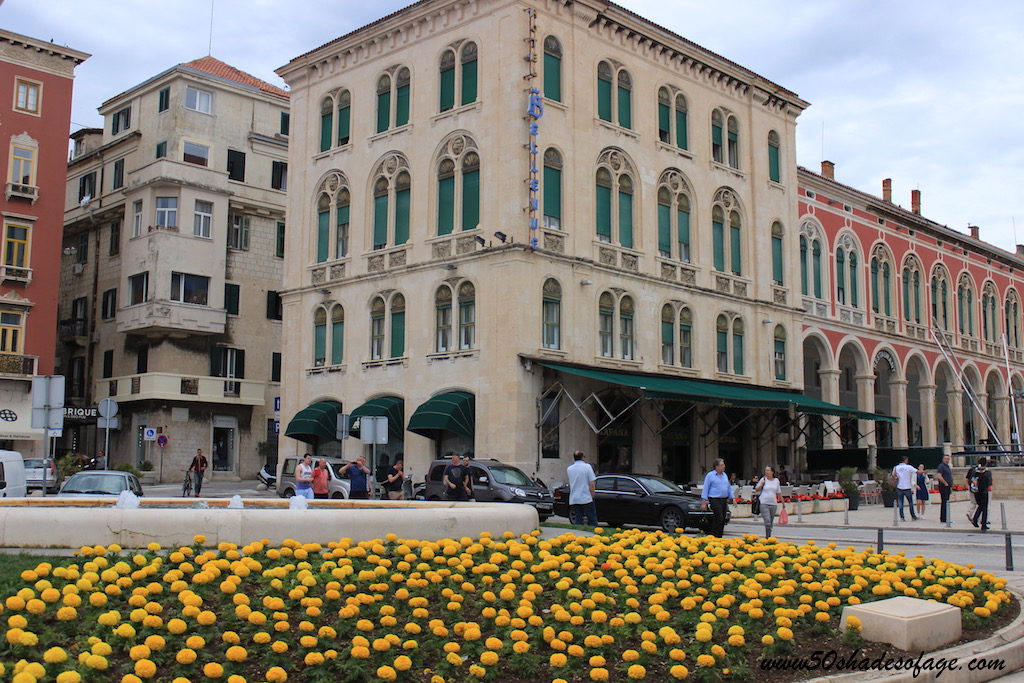 Fountain and gardens in Split

After we met up with the boys for a tasty lunch of Cevapcici (Croatian spiced sausages) at one of the restaurants on the riva, we left them to their birthday drinks and set off towards a shopping street where we browsed some of the upmarket stores. 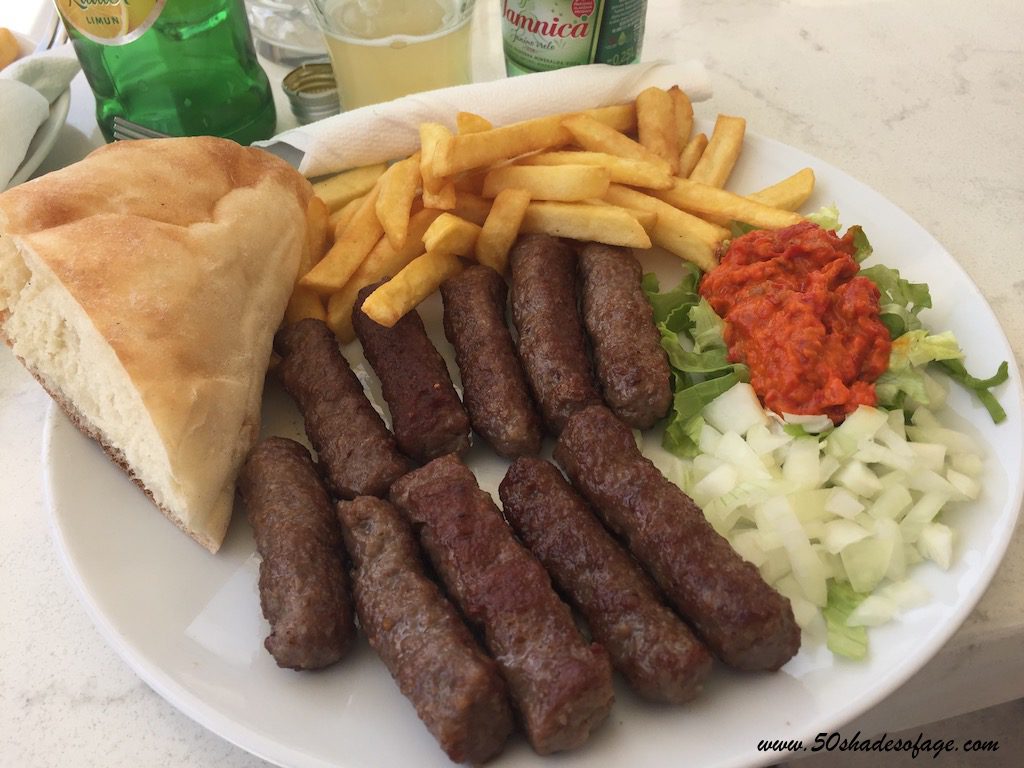 Our lunch of Croatian Spicy Sausages 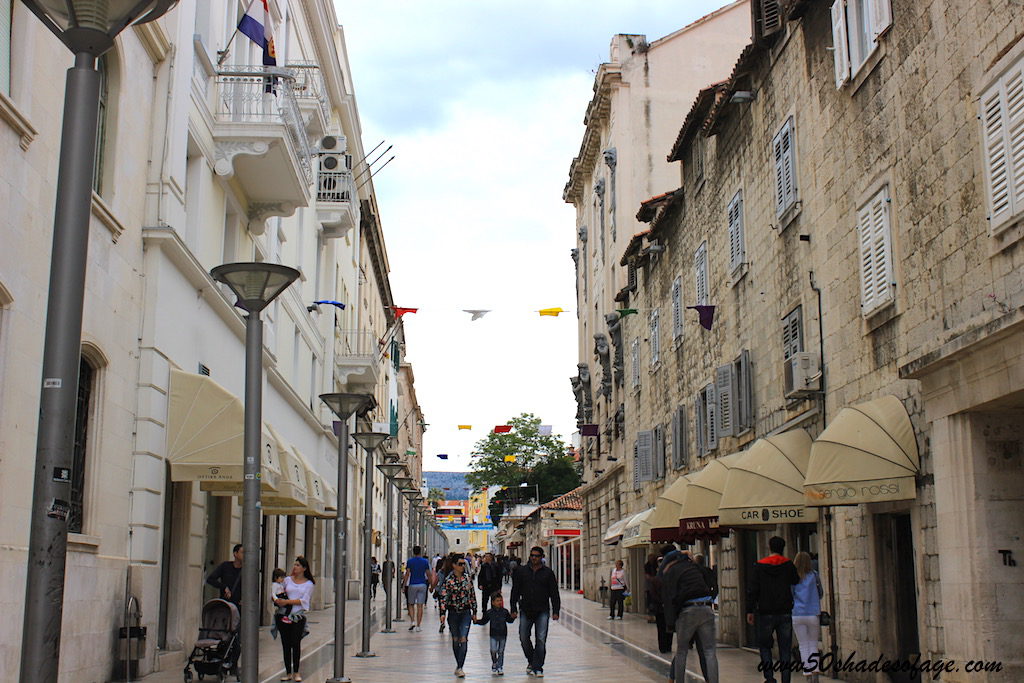 We all agreed that Split was a vibrant and charming city. There are a ton of things to do in this place and if we’d had a few more days we could have explored the many attractions that it has to offer. For more information on what there is to do in Split visit Frankaboutcroatia. 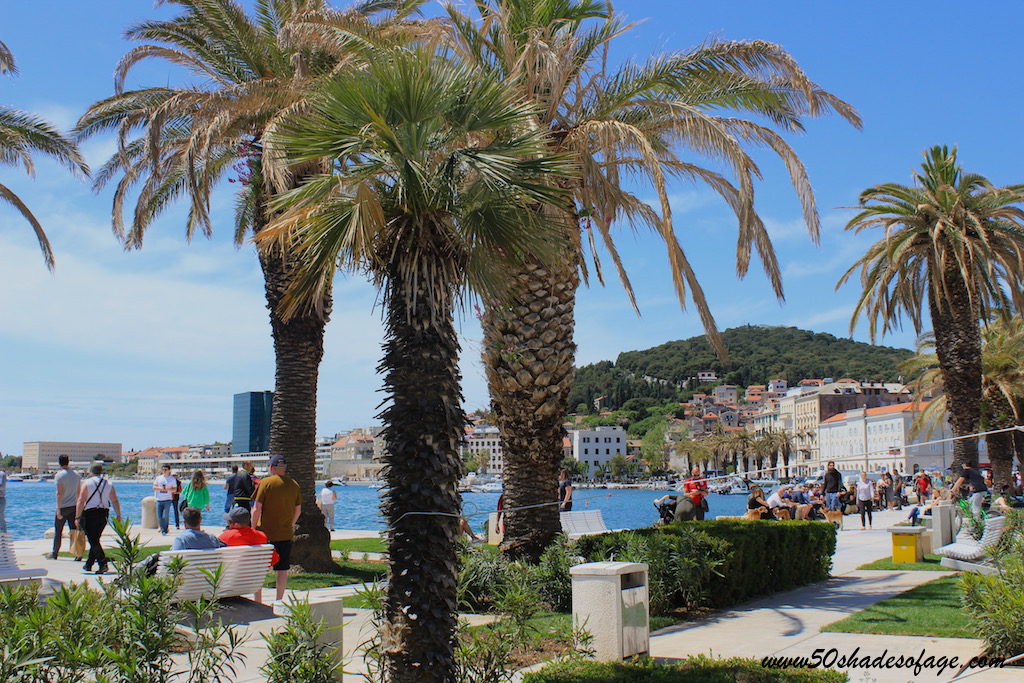 Our day in Split was a rest day for us all after spending our previous seven days jumping on tours and walking countless kilometres at various port stops. Plus it was a special birthday celebratory day for my husband, who enjoyed taking it easy and partaking in a few beers. Rest assured we all relished the opportunity to just chillout in what was a splendid day in Split. 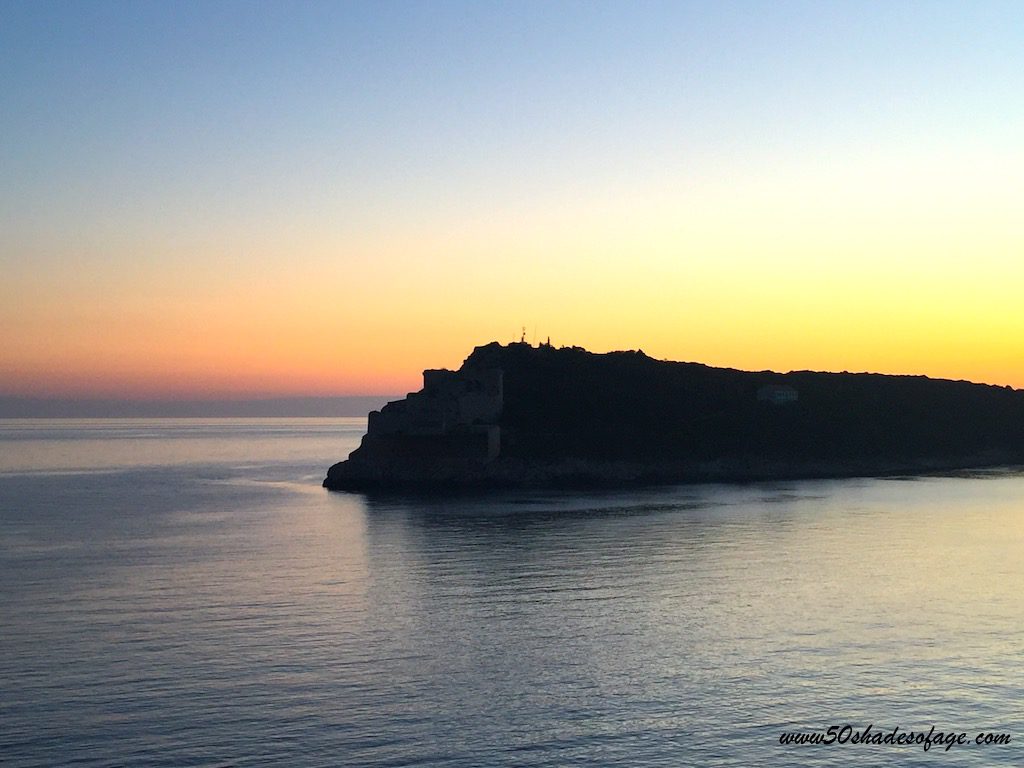 Spread the love
CroatiaCroatian BeachesCroatian CitiesDiocletian PalaceSplit
By 50 Shades, July 24, 2017 Kathy was a 50 something year old when she started up this blog 6 years ago, but has since turned over another decade and is now in her early 60s. She is married with two adult children and lives on the Tweed Coast of New South Wales, Australia. Kathy enjoys living life to the fullest and loves to keep fit and active by maintaining a healthy diet and exercising regularly. Some of her interests include reading, photography, travelling, cooking and blogging! Kathy works part-time as a freelance writer but her real passion is travelling and photographing brilliant destinations both within Australia and overseas and writing about it.