The Croatian Island of Korčula 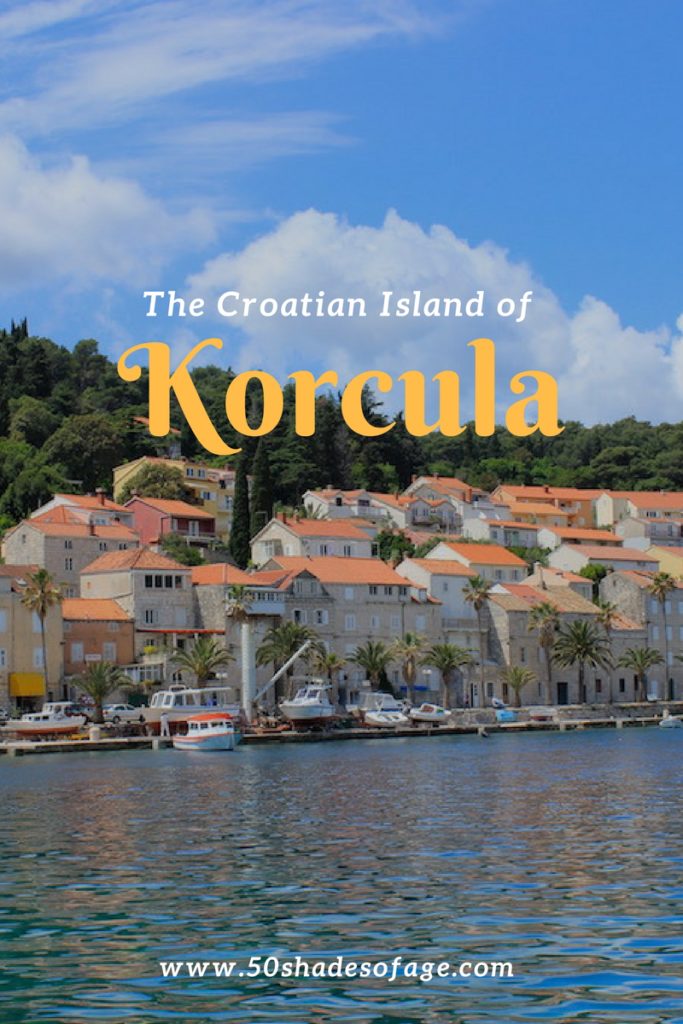 We knew very little about our next port of call on our Mediterranean Cruise. In fact I’d never heard of the Croatian Island of Korčula. Probably because the Croatian islands of Viz and Hvar are more well known and popular with the Croatian sailing boats that cruise around the Adriatic Sea off the coastline of Croatia. All we knew was that Korčula is sometimes referred to as “mini Dubrovnik” and that it claims to be the birthplace of Marco Polo.

So with those two impressive facts in my mind I was looking forward to seeing this less frequented island. Korčula is the sixth largest Croatian Island and is known for its greenery and dense forest. The main town Korčula Town, where we disembarked from our cruise ship, has an Old Town with medieval squares, churches, palaces and houses. There’s also smaller towns and villages dotted around on the island that are worth exploring. 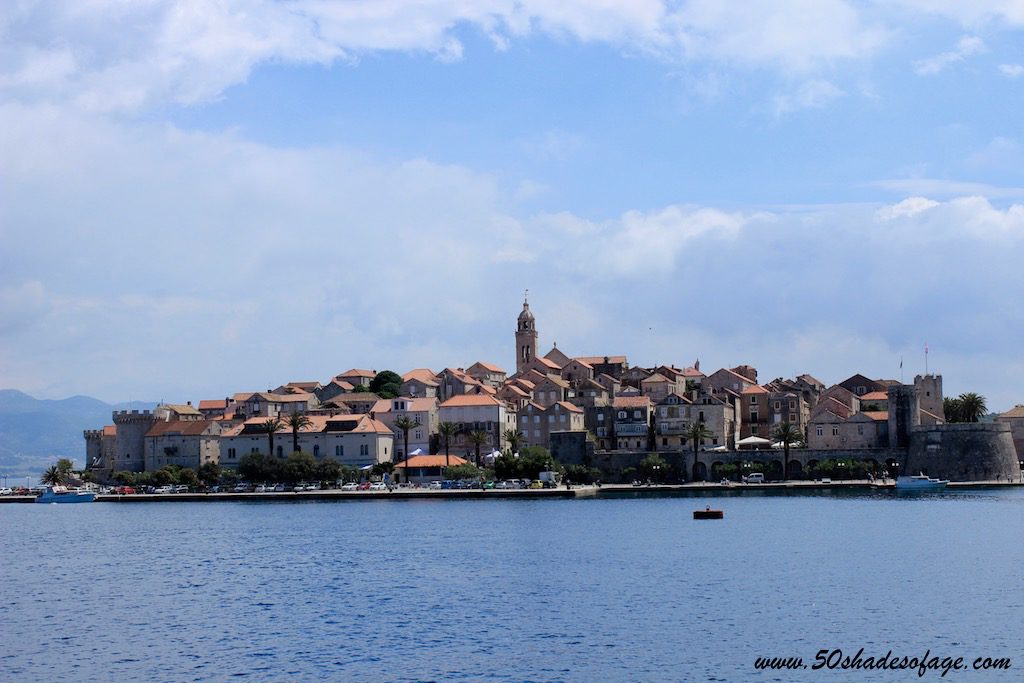 Our ship was moored a little way out from Korčula Harbour and as we boarded the tender boat there were dark clouds looming on the horizon. It looked as though it was going to pour down rain at any moment, so donning raincoats and carrying brollies, we quickly scampered for cover. 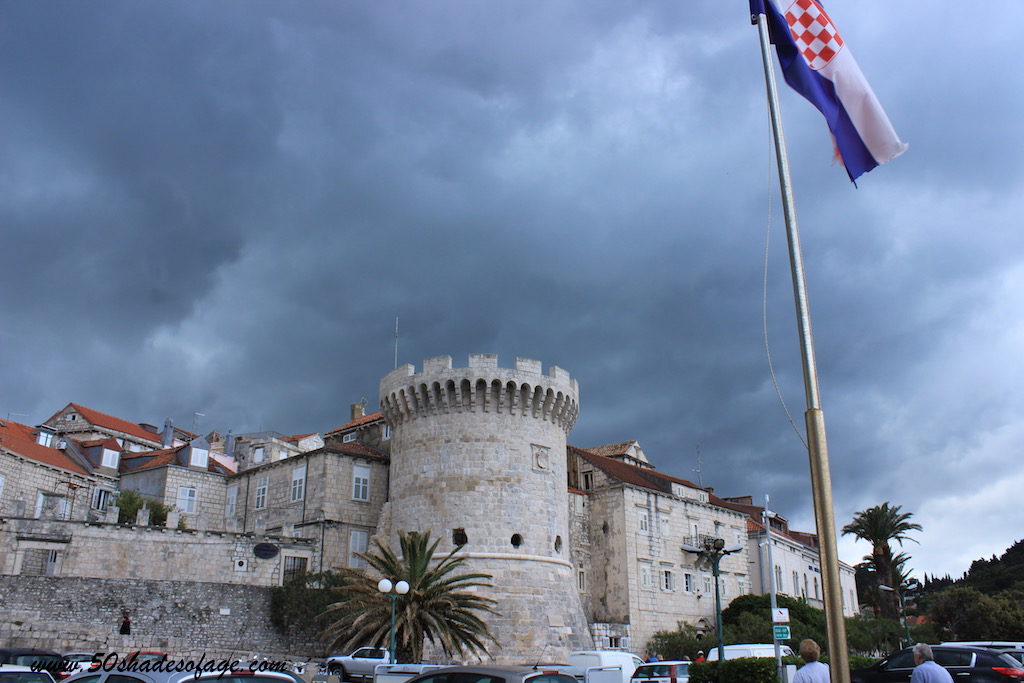 The Old Town itself is set on a small peninsula surrounded by sea on three sides. There were plenty of brightly coloured fishing boats and magnificent yachts moored in the bays and the marinas. It was such a pretty town from the sea, even with grey skies above. 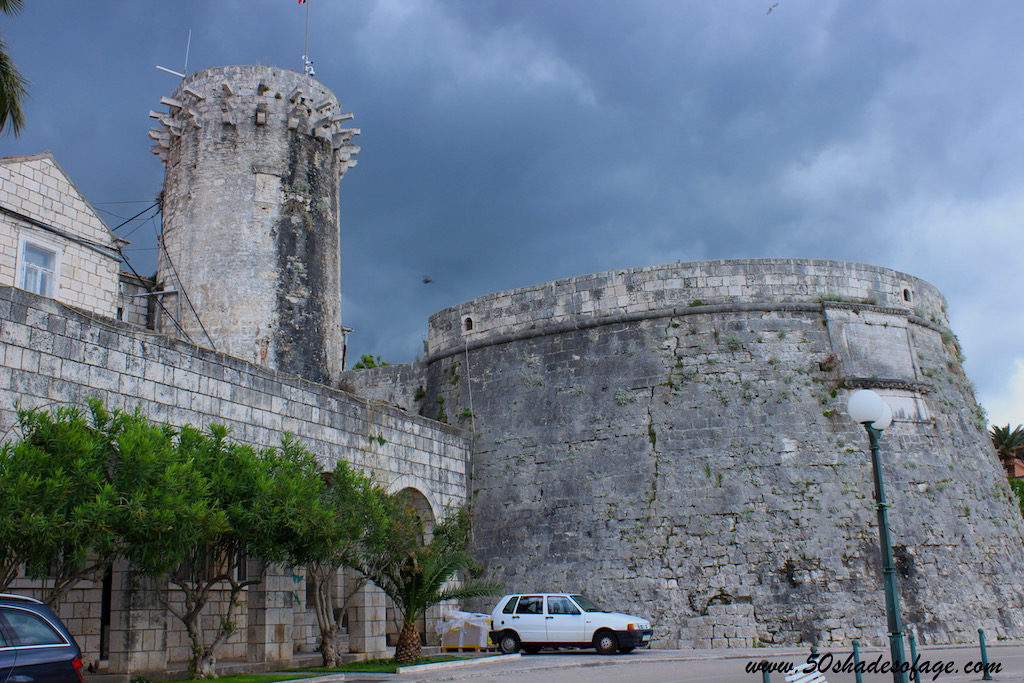 After we realised the threat of rain had dispersed we walked through the narrow streets of the town around to another bay and marina, ogling the many beautiful yachts. 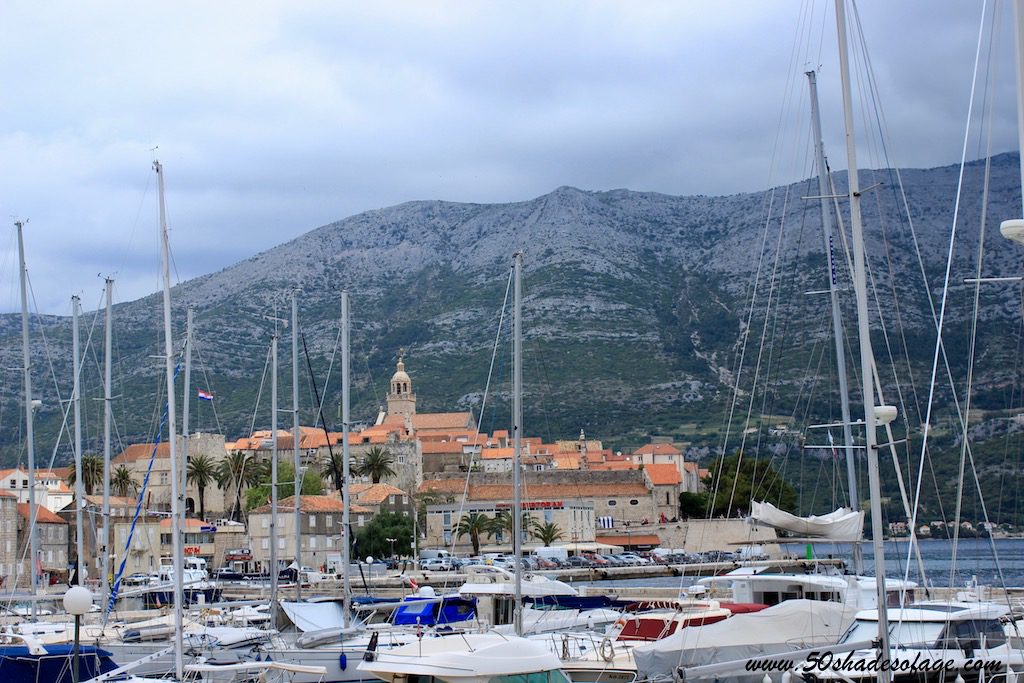 A marina full of beautiful yachts in Korcula Town

We then followed the bay around past a few restaurants and a big resort to a second bay. With our morning exercise out of the way, we turned around and walked back the other direction past the old town to a convent and church located by the water. 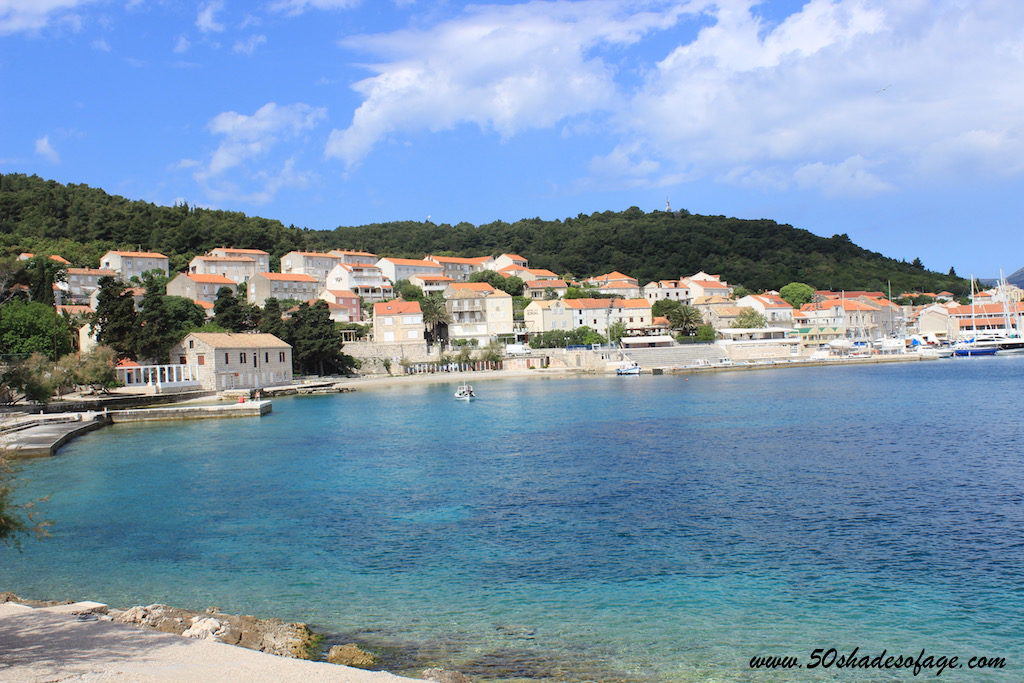 One of the pretty bays of Korcula Town 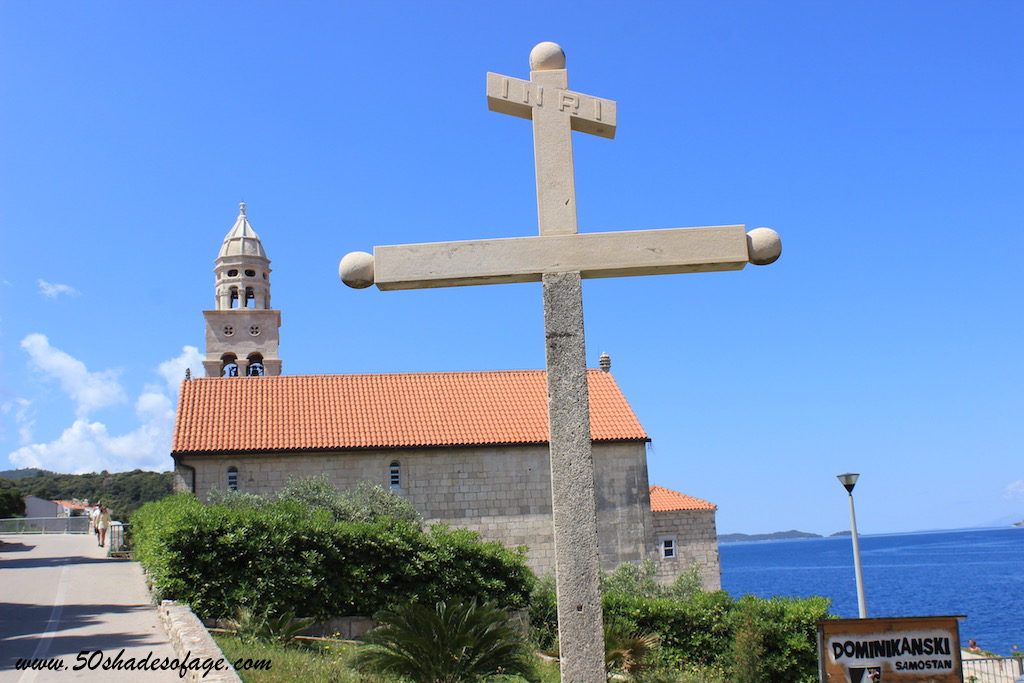 A church with waterfront views

Market stalls had been setup around the exterior of the Old Town walls and being the shopping tragic that I am, I browsed these for a while. My two female travel companions and I were on a mission to purchase a couple of Captain’s caps that we were making the boys wear for my husband’s birthday the next day in Split. It’s a long story, but this has been a tradition of ours since travelling with the same friends on two previous occasions. Whoever has the birthday, must wear the hat that the wives have chosen for the occasion! 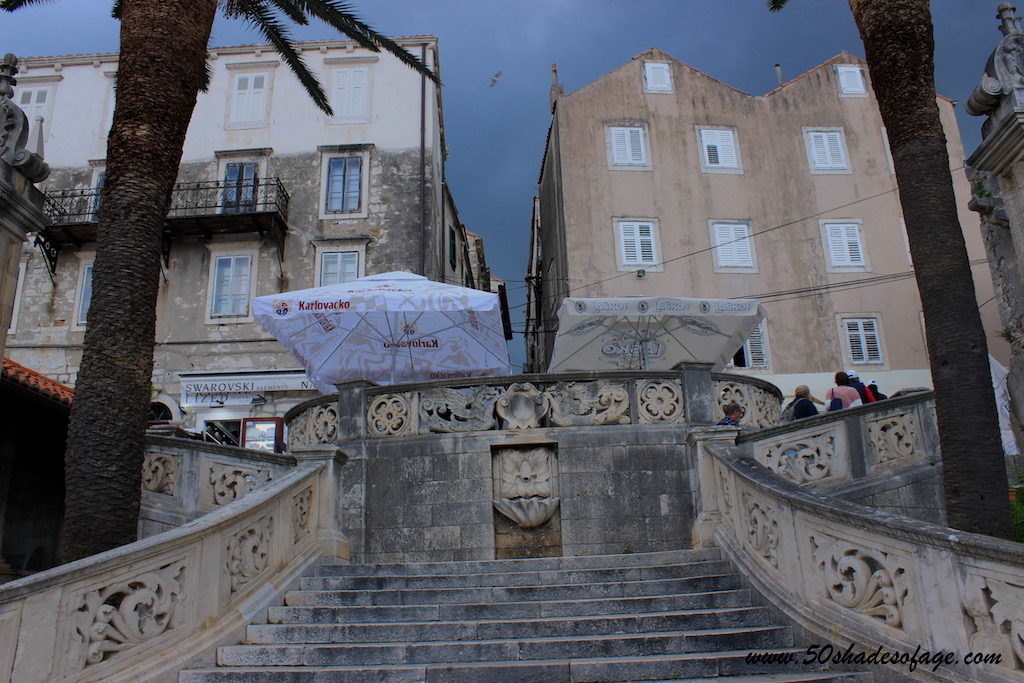 Staircase into the Old Town

We entered the Old Town via the staircase through the land gate with Revelin Tower hovering above. 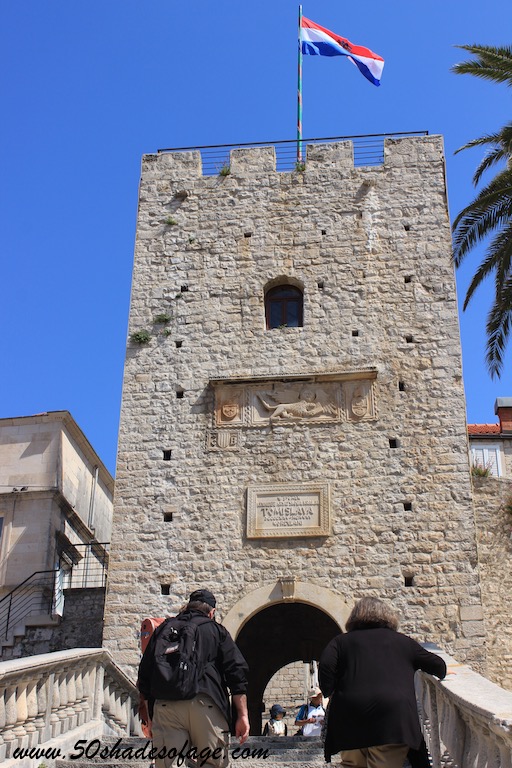 Revelin Tower at the land gate entry into the Old Town

Although this 13th century fortress is a lot smaller than Dubrovnik, it is very well preserved and has many remarkable medieval buildings. 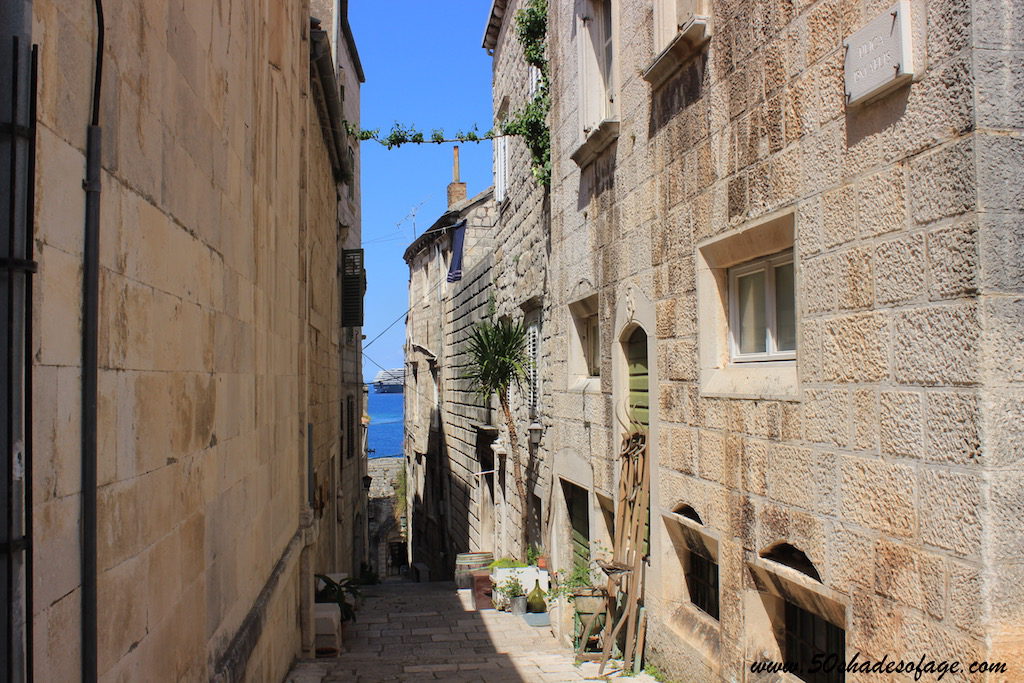 One of the narrow laneways in the Old Town

The narrow streets are arranged in a herringbone pattern allowing free circulation of air but protecting against strong winds. 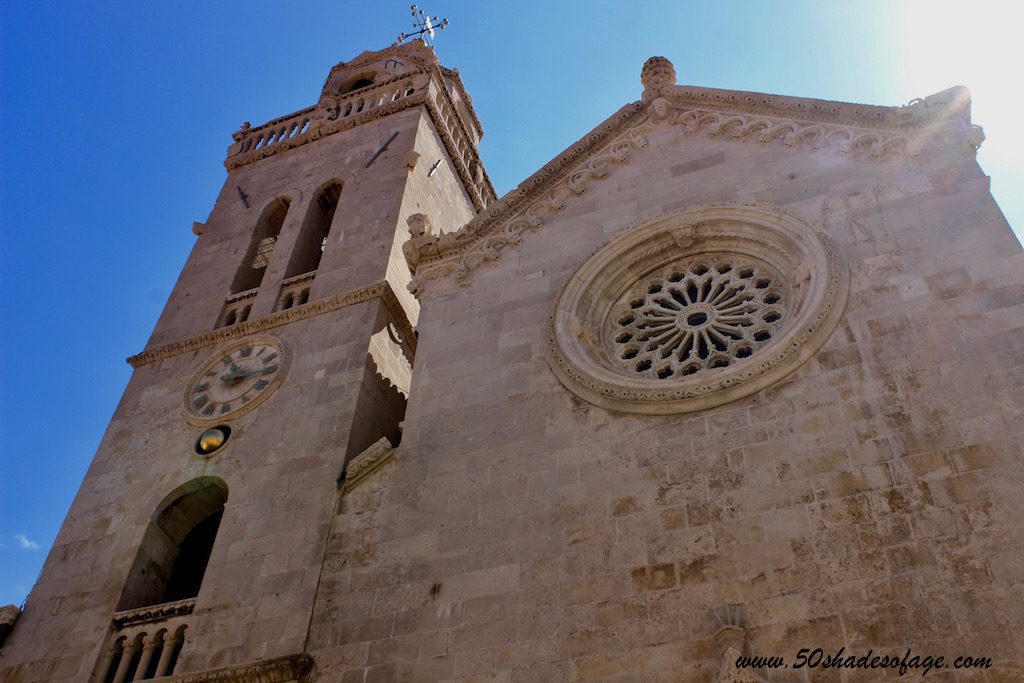 The town’s historic sites include the central Gothic and Renaissance Cathedral of St Mark, the Town Hall and the massive city fortifications. Located in the Gabrielis Palace, is the Town Museum which is an outstanding example of 15th and 16th century residential architecture in the centre of the old town. 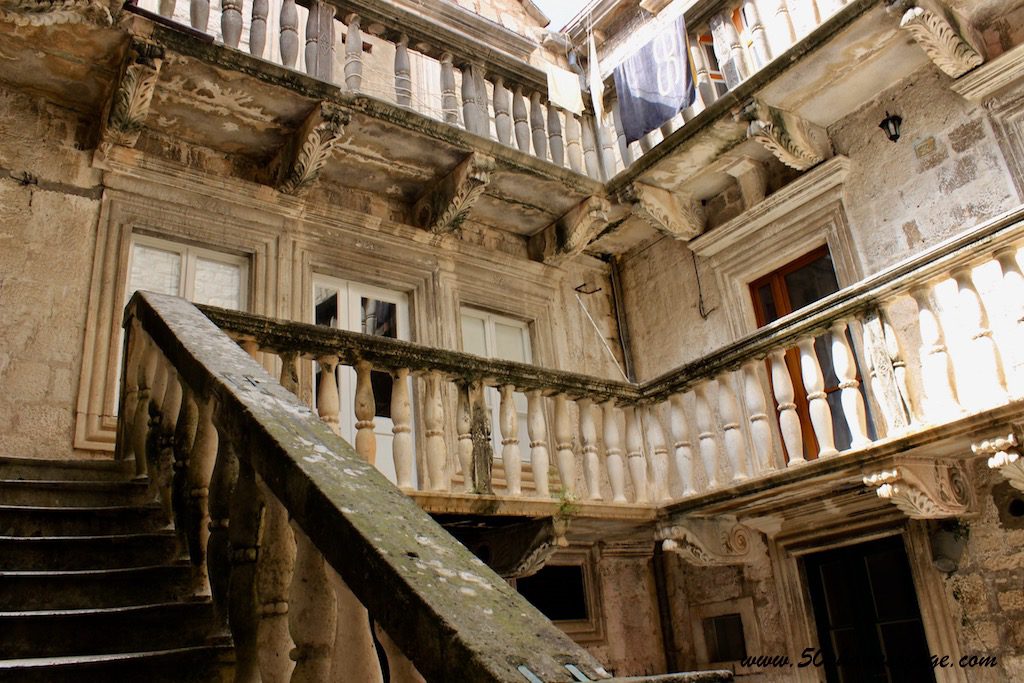 The detailing on an old renaissance building in the Old town 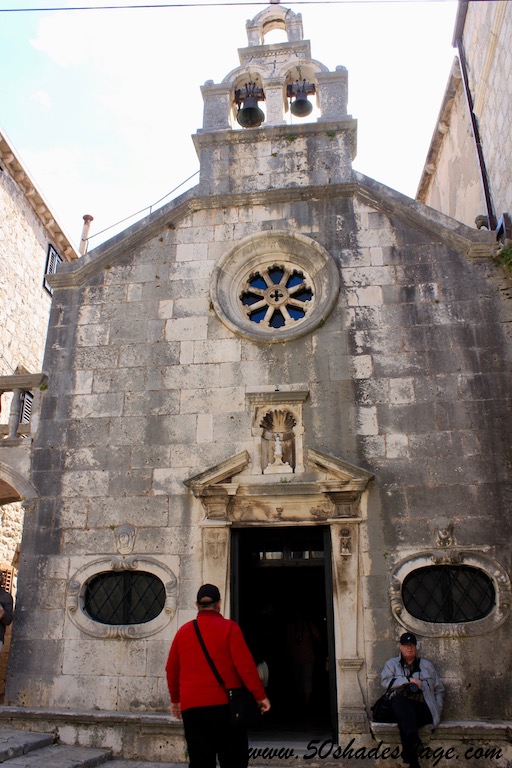 Medieval Church in the Old Town

But by far the biggest attraction in Korčula Old Town is the supposed house that the famous Venetian explorer, Marco Polo was born in. The actual house does not originate from the times of Marco Polo (but was built in the 17th century). However we found it is still worth a poke around – at least to go up its watchtower for some great views. 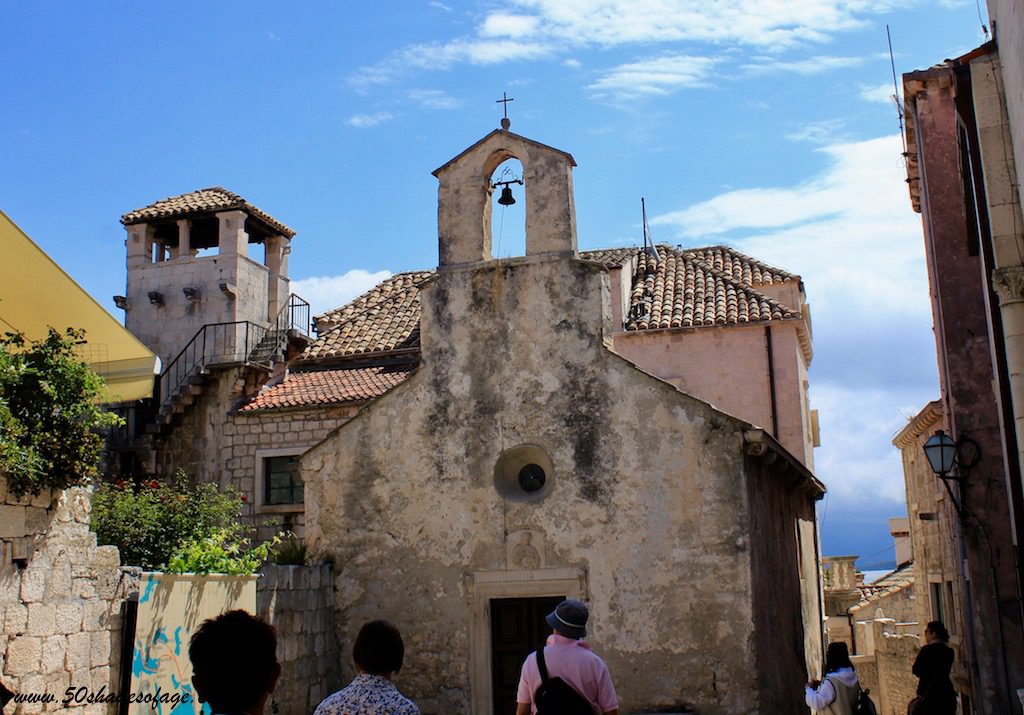 Around the Old Town we discovered numerous places and things named after him, like shops and souvenirs. Given the fact that Marco Polo was a seafarer and adventurer he certainly was prominent in the local area and the Adriatic Sea. So maybe there is an iota of truth in the claim. 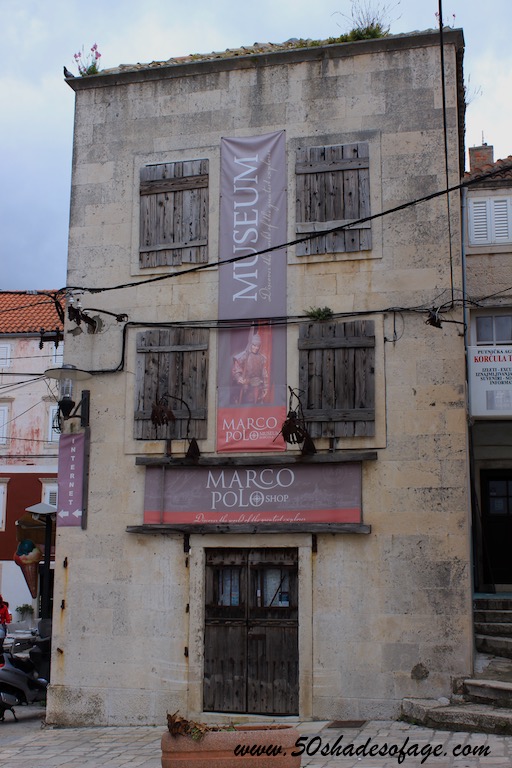 We stopped for a coffee at a bar with brightly printed vinyl chairs on the promenade overlooking the bay. The cafe/bar was the perfect place to perch oneself to people-watch and enjoy the sun that had finally emerged from the dark cloudy skies of earlier on in the day. 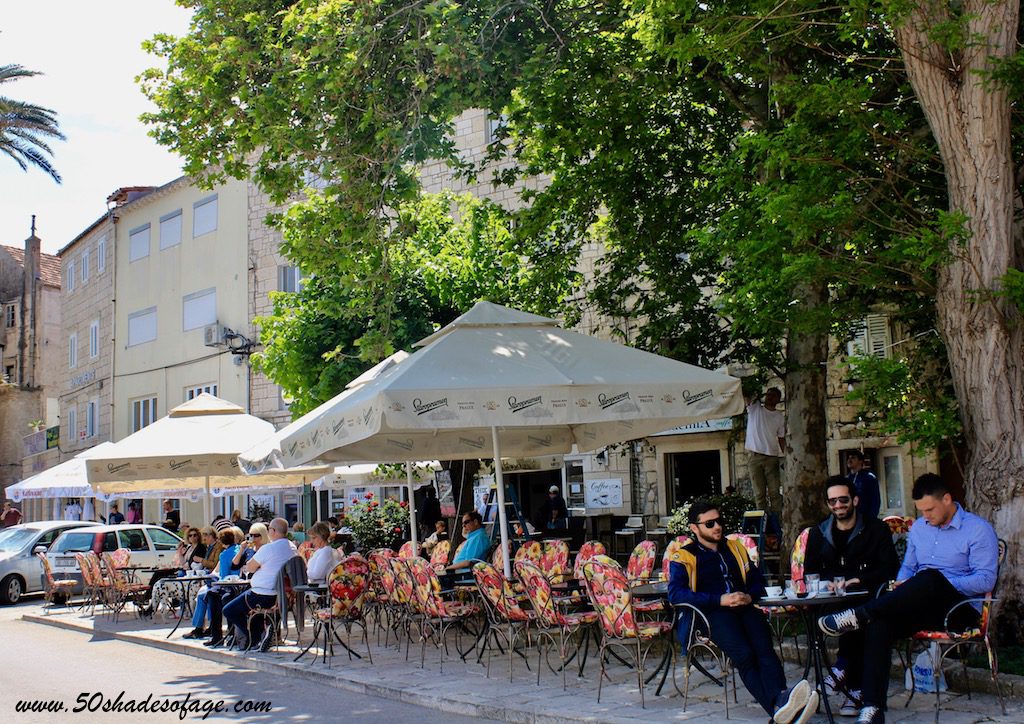 On the other side of the peninsula of the Old Town and outside the walls there are many waterfront restaurants all in a row. We strolled around a few times before we could decide on a place to eat lunch. Although the day was sunny, the breeze was decidedly brisk coming straight off the water. 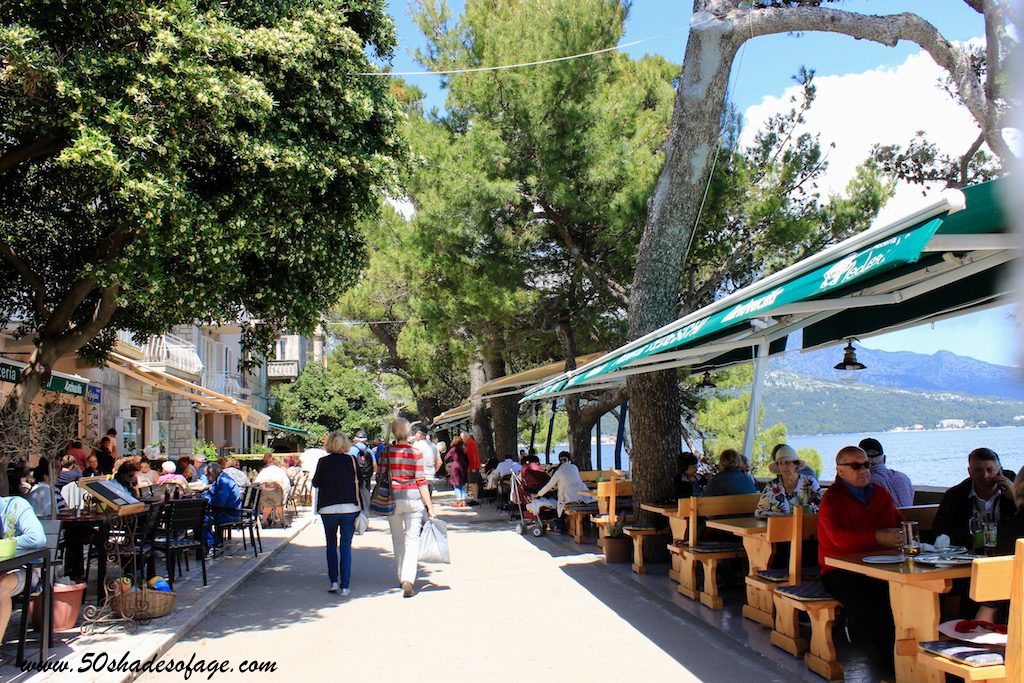 Strolling around the Waterfront Restaurants just outside the Old Town walls

We finally chose a table in the sun and all agreed that the special of the day – homemade vegetable soup and sour dough bread, sounded appetising. This was all washed down nicely with a pint of the local Croatian beer called Karlovacko. 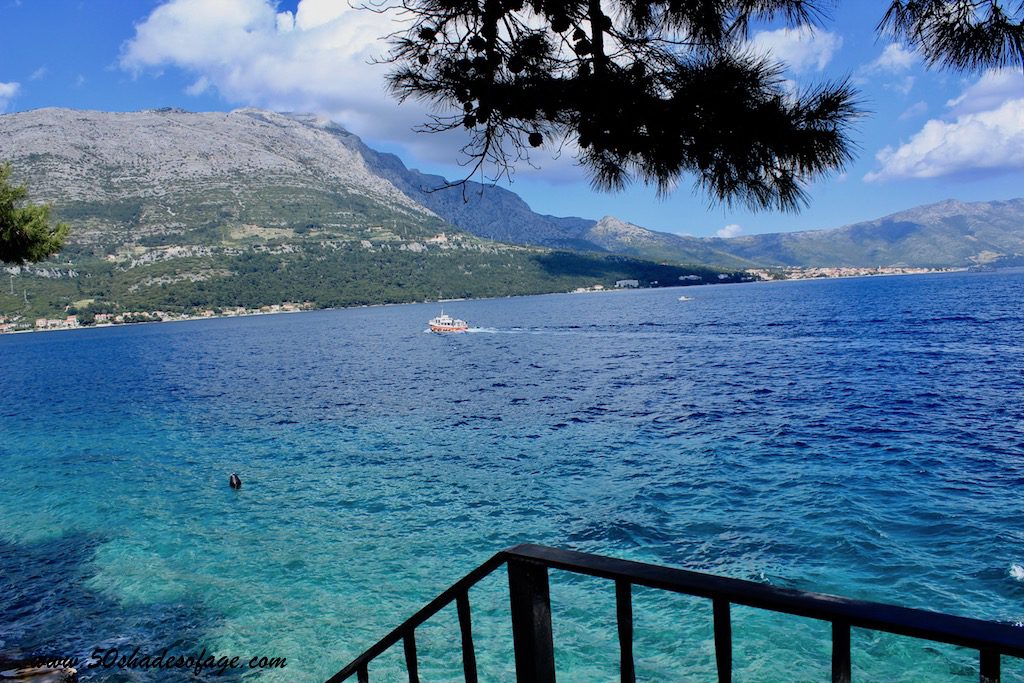 Our views over the Korcula Bay from our restaurant

Spending some time strolling around Korčula Town was a special day for me. I enjoyed the local vibe of the place and the relatively sleepy uncrowded streets. I finally found a place a little off the beaten path. A refreshing escape from the hordes of tourists that frequent the other Croatian hotspots. Korčula was divine!

Spread the love
CroatiaCroatian IslandsKorculaKorcula IslandKorcula TownMediterranean Cruise
By 50 Shades, July 17, 2017 Kathy was a 50 something year old when she started up this blog 6 years ago, but has since turned over another decade and is now in her early 60s. She is married with two adult children and lives on the Tweed Coast of New South Wales, Australia. Kathy enjoys living life to the fullest and loves to keep fit and active by maintaining a healthy diet and exercising regularly. Some of her interests include reading, photography, travelling, cooking and blogging! Kathy works part-time as a freelance writer but her real passion is travelling and photographing brilliant destinations both within Australia and overseas and writing about it.