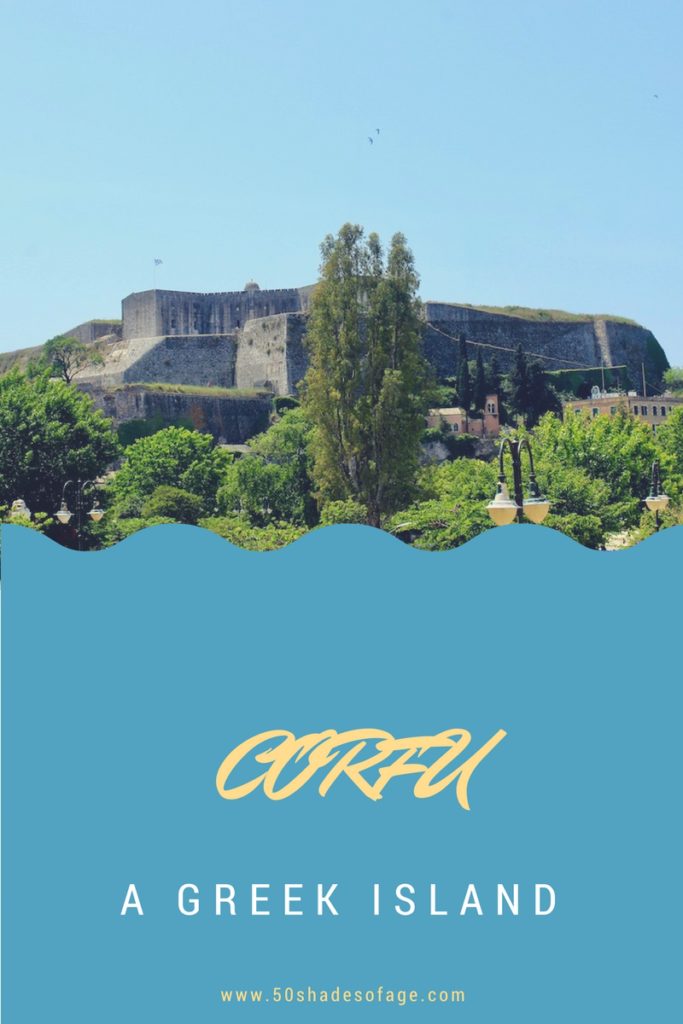 My husband always told me he would take me to the Greek Islands one day, so he came good on his promise when we sailed into the port of Kerkyra or Corfu. The Greek Islands have always conjured up images of white-washed walled and blue roofed buildings, set high into steep cliff faces and overlooking the impossibly azure blue waters of the sea. Corfu – a Greek island is one of the many spectacular islands that are dotted off the coastline of Greece in the Ionian Sea.

However, the majority of the Greek Island group are in the Aegean Sea between Greece and Turkey and that is why when I first glimpsed Corfu on the other side of Greece in the Ionian Sea, it was not what I expected. No white-washed buildings or blue roofs, but a castle city with Venetian water-coloured buildings and ancient fortresses that once protected this city.

The Greek name Kerkyra, is related to two powerful water deities: Poseidon, god of the sea, and Asopos, an important Greek mainland river. Whereas the name Corfu means “city of the peaks”, denoting the two peaks on the island of Palaio Frourio. Names from two entirely different sources. 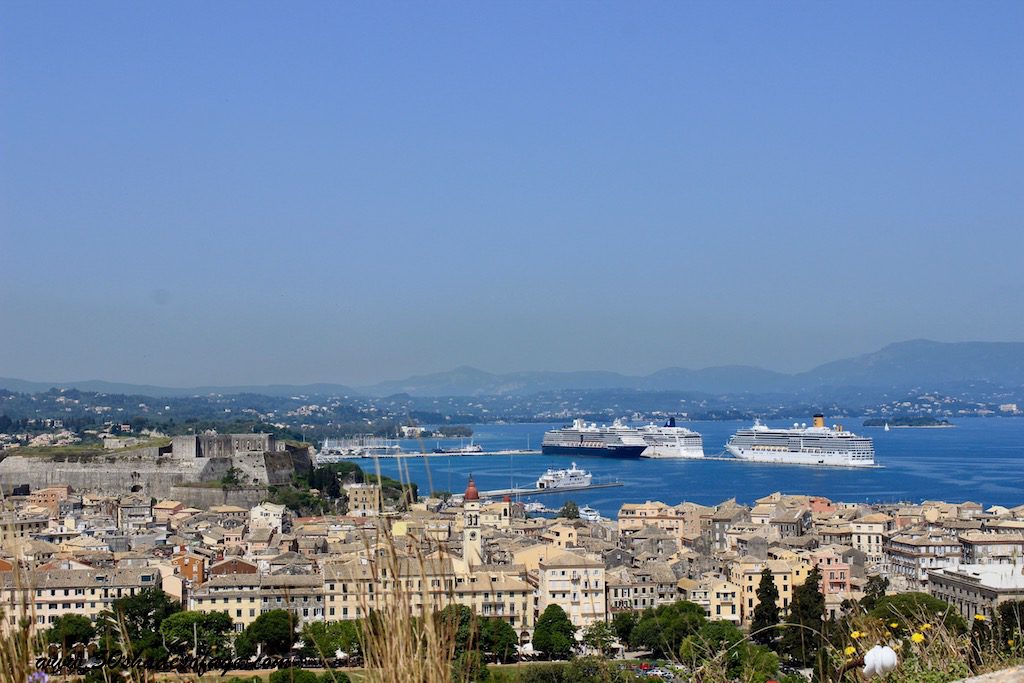 Views of Corfu Old Town and Port from the Fortress

On our arrival into the port we weren’t alone, there were two other huge cruise ships docked and there were tourists everywhere with tour buses, taxi driver and hop on hop off buses all waiting for the onslaught. Amongst the chaos we managed to work out a plan for the day and that involved getting aboard one of the top decker buses and setting off on a tour around a small part of the island. 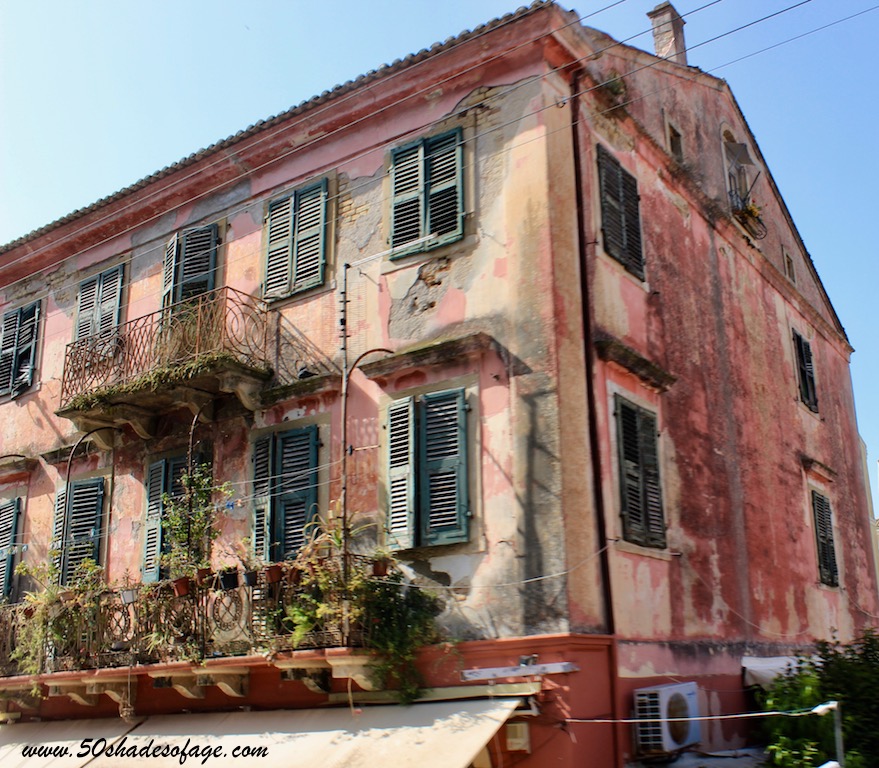 One of the Venetian buildings in Corfu Old Town

So it might sound like we’re obsessed with hop on hop off buses, but we discovered that they really are a great way of getting around and they also provide you with a commentary, via ear phones, of the history of the places you are seeing. The other alternatives are group tours, private tours or grabbing your own taxi driver and hoping he has some sort of knowledge of the place. But for those on a budget, like us, we found the double deckers to be an affordable option. 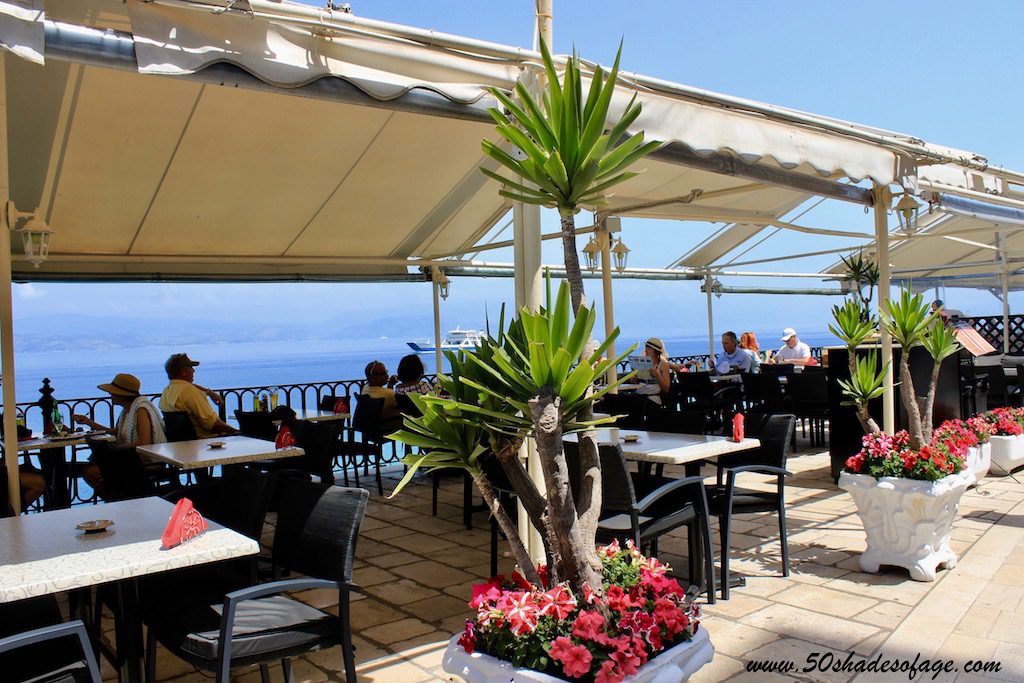 A Waterfront Restaurant in Corfu

Cruising around, on a beautiful fine day with the most magnificent views, with the sea on one side and the Old Town on the other, was very enjoyable. But I’m not sure how this would go on a cloudy rainy day! 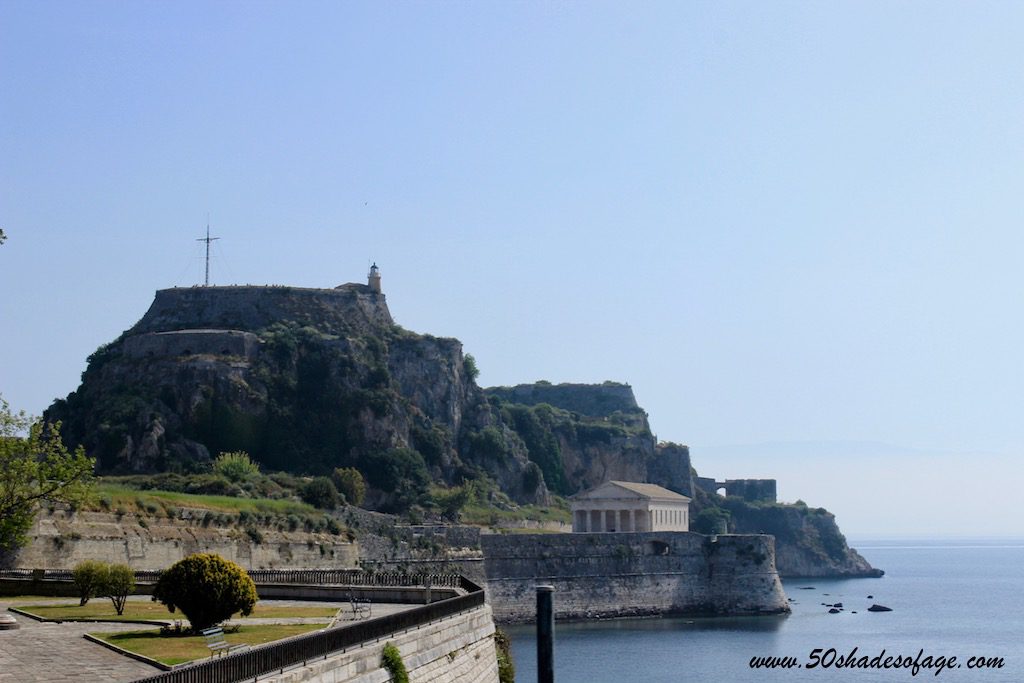 We wound our way through the Old Town taking in the sights, smells and sounds of the 8th century BC fortress town. The Venetian Fort dominates the skyline. It was used for four centuries to defend the island. A lot of the housing that remains is partly from the Venetian period and partly from the 19th century. We passed the open air public markets that were just starting up for the day with stalls being set up in a large open square.

After we got out of the Old Town we followed the shoreline around to Ormos Garitsas, a wide open bay with the Naok Sailing Club and Marina and many yachts moored in the bay. There is extensive parklands adjoining the bay and a few restaurants with lovely views over this pretty bay. 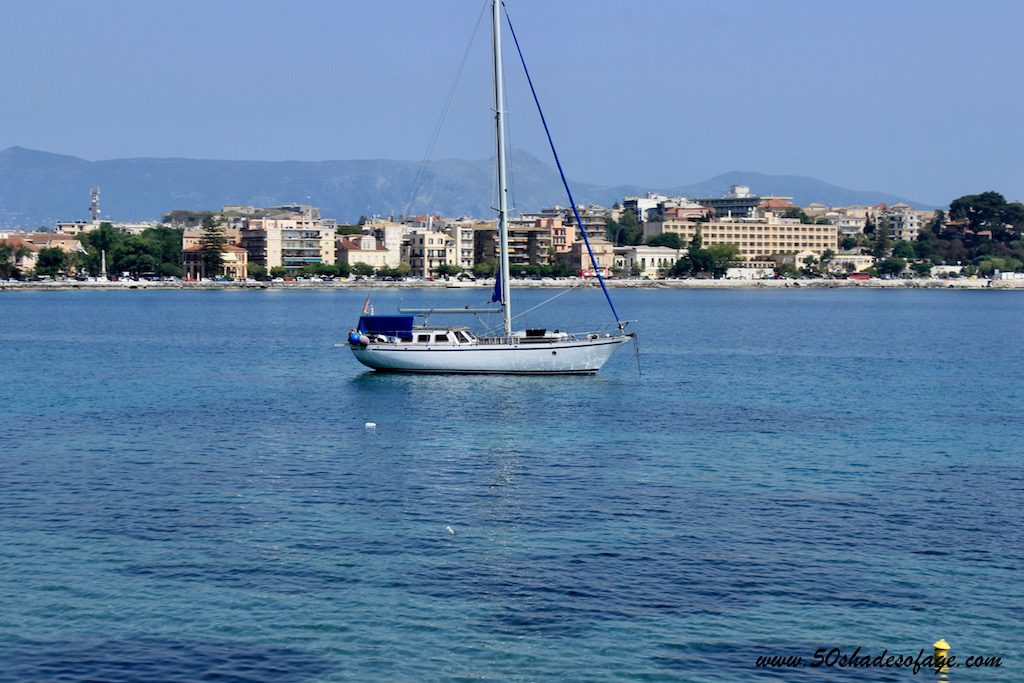 We discovered some old ruins of an early christian church and Paleopolis Archeological Site. Paleopolis is the ancient city of Corfu founded in the 8th century B.C. You can stroll around the site to the the old watchtower that leads you past the temple of Athena, and joins the road to Mon Repos Palace. Just outside the palace can be seen extensive archaeological works, and inside the grounds a temple has been excavated. 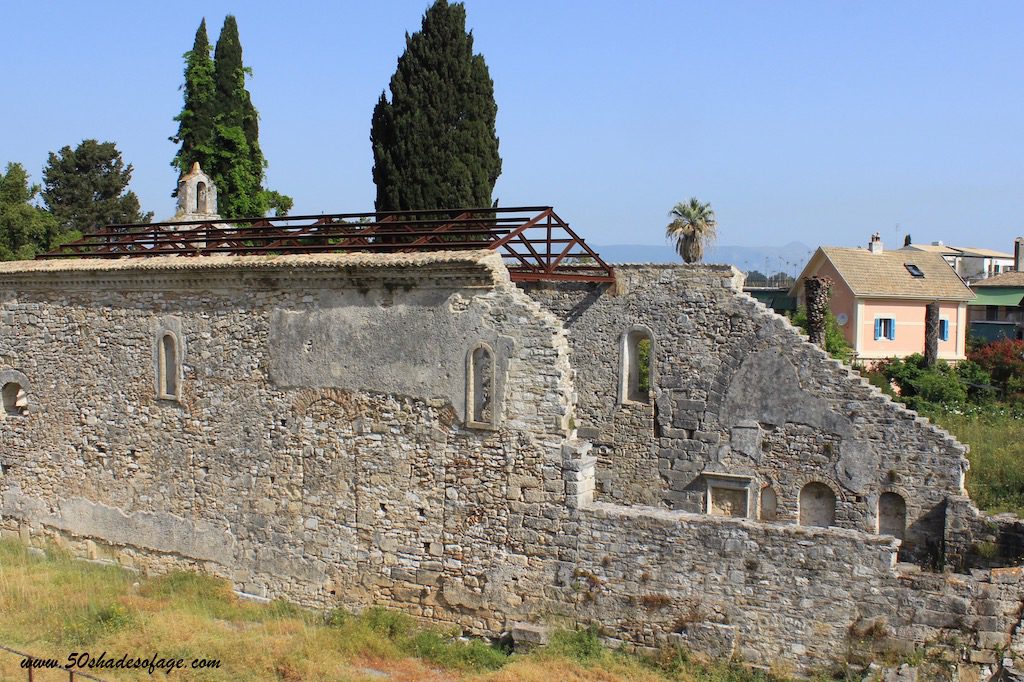 The ancient city was an important trading post, and it is easy to imagine the ships of many tribes bringing their colourful wares, and bartering on the quayside.

We headed in a southerly direction from Corfu town to the Kanoni Peninsula. The name Kanoni (canon) is derived from the canons that were protecting the city at the entrance of the lagoon, once the main port of the island, one still standing as a reminder of its turbulent history. 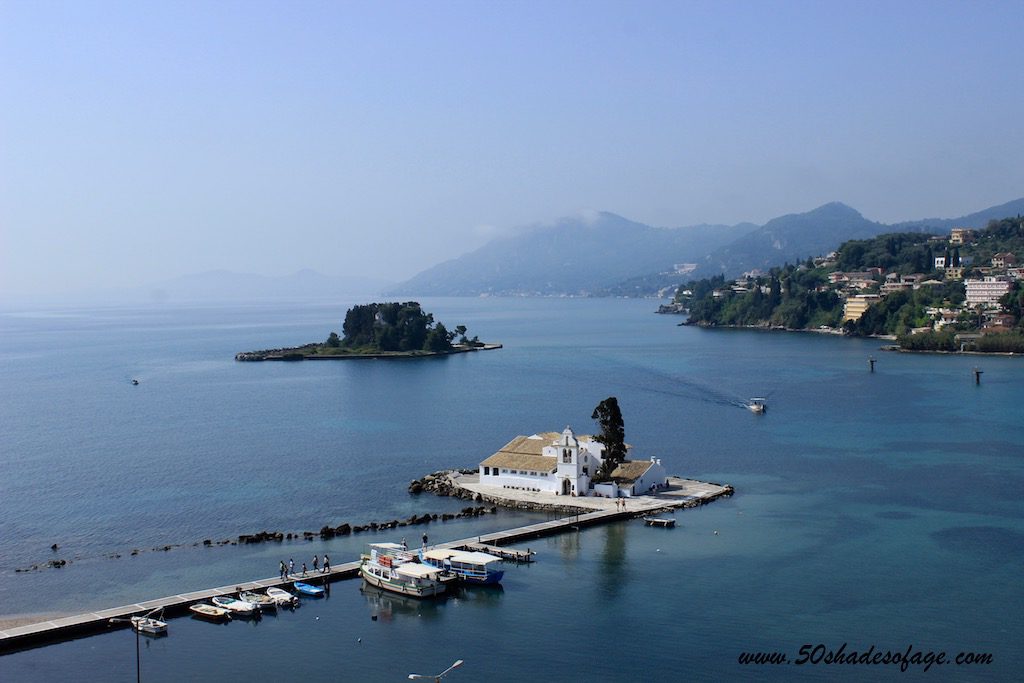 Kanoni has lovely pebble beaches and also offers the most magnificent views of Mouse Island (Pontikonisi) with the monastery of the Panagia Vlacherna which is joined via a small bridge. 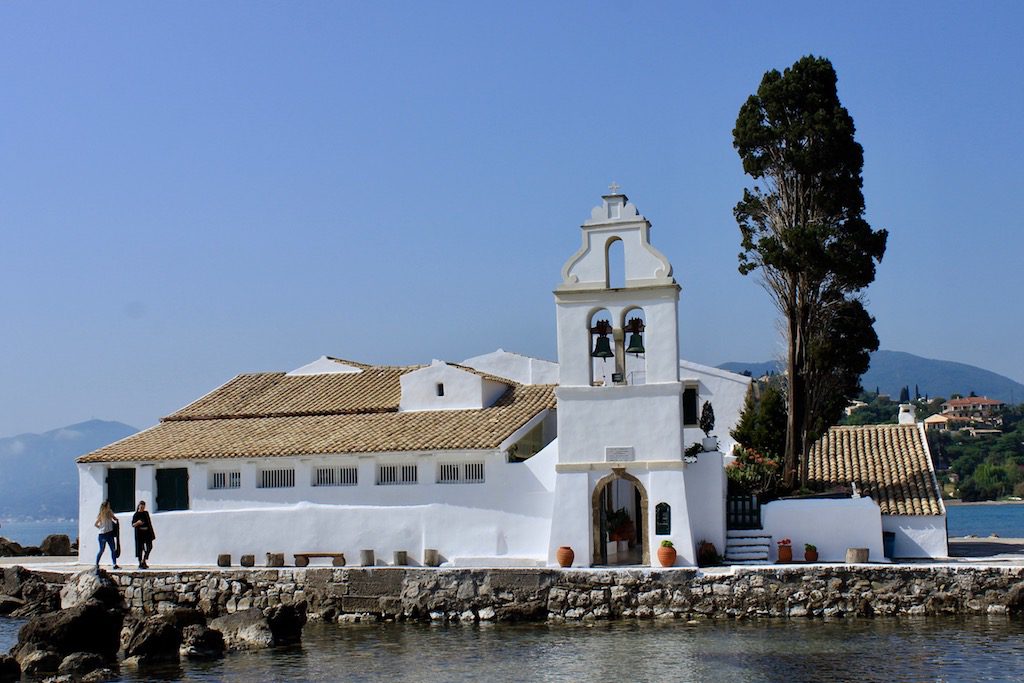 The area has many large hotels, restaurants, clubs and other shops that make Kanoni a thriving tourist destination, there is also the Corfu Casino housed in a hotel of the area. 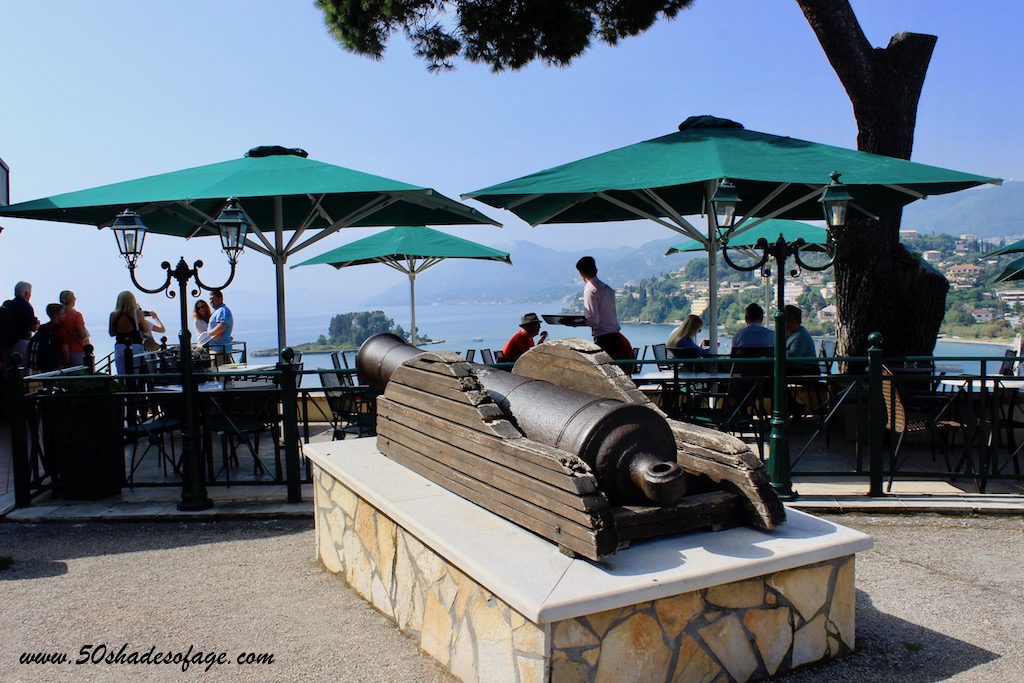 We spent hours exploring the extensive grounds, buildings and museums of the Old Fortress, that is surrounded on three sides by sea. Strolling around the grounds it was hard to picture the Byzantines of the 12th century A.D. living within the walls of this fortress city. Later on during the 15th to 16th century the Venetians made modifications to the fortress before the British arrived. 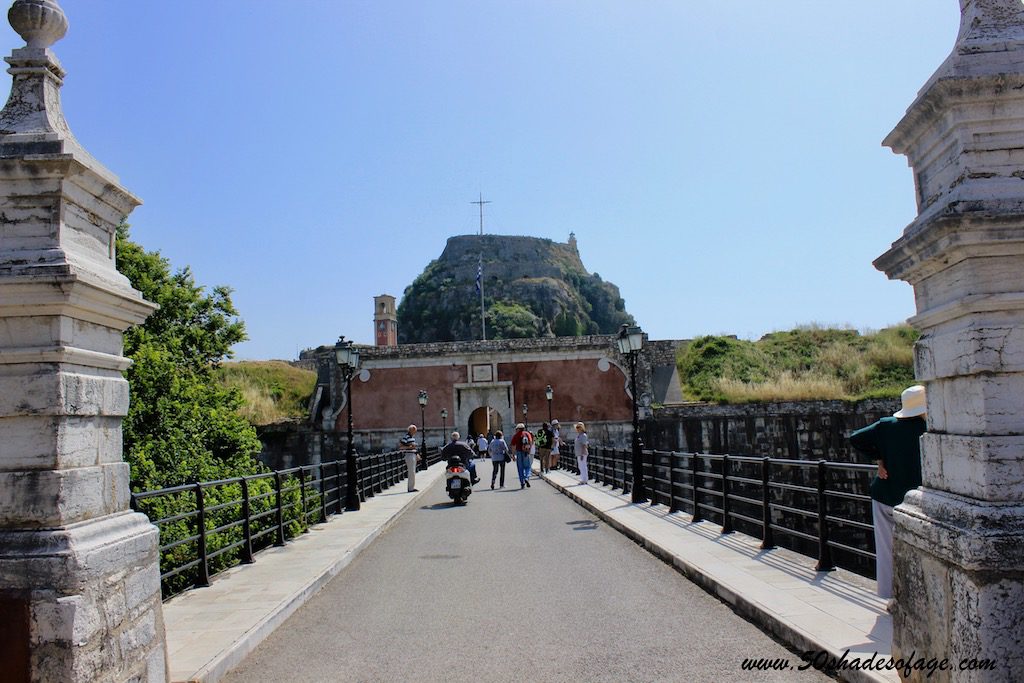 The entrance across the moat to the Old Fortress 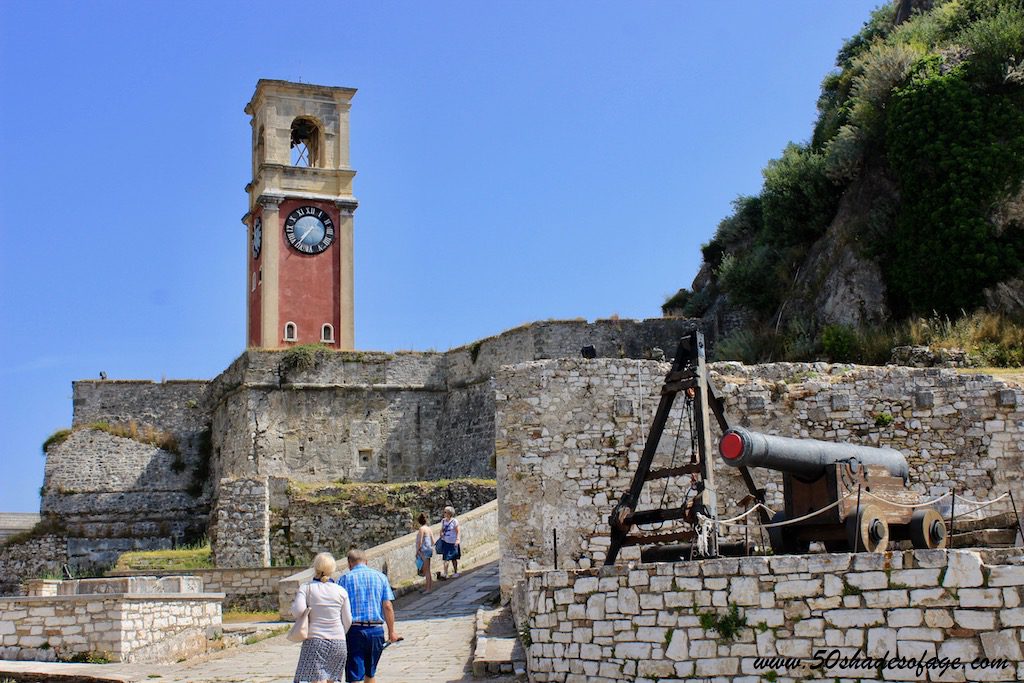 Inside the walls of the Old Fort

At the top of the fortress at Castel a Terra, where a cross marks the spot, there are panoramic views of the town and also of the opposite mainland coast. Or take the many stairs up to the old lighthouse that offers more stunning views. 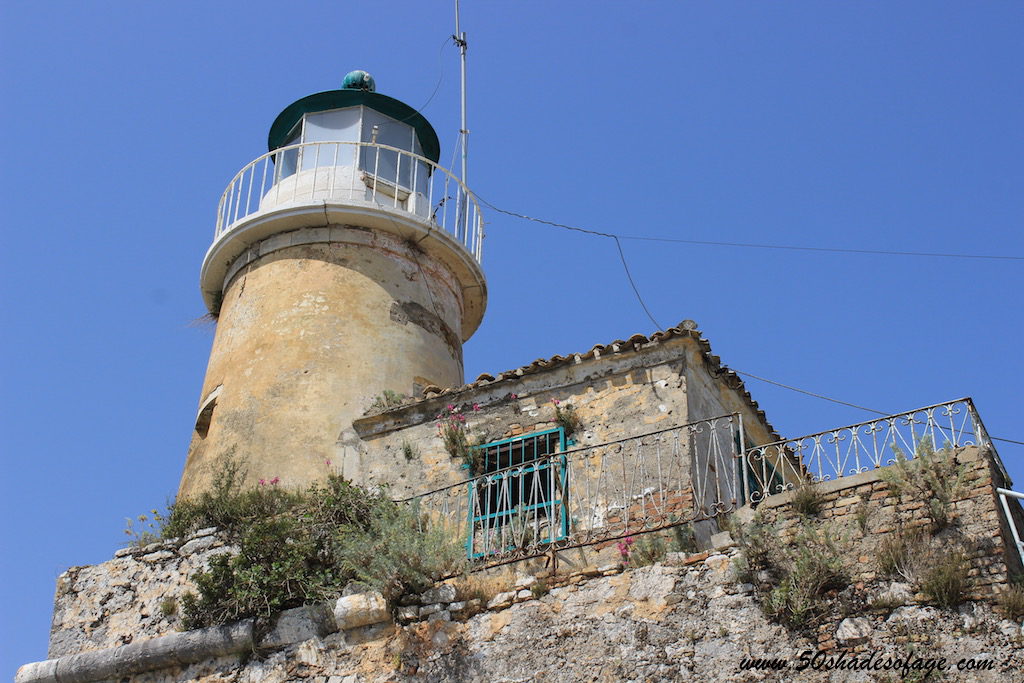 An old lighthouse at the top of the fort 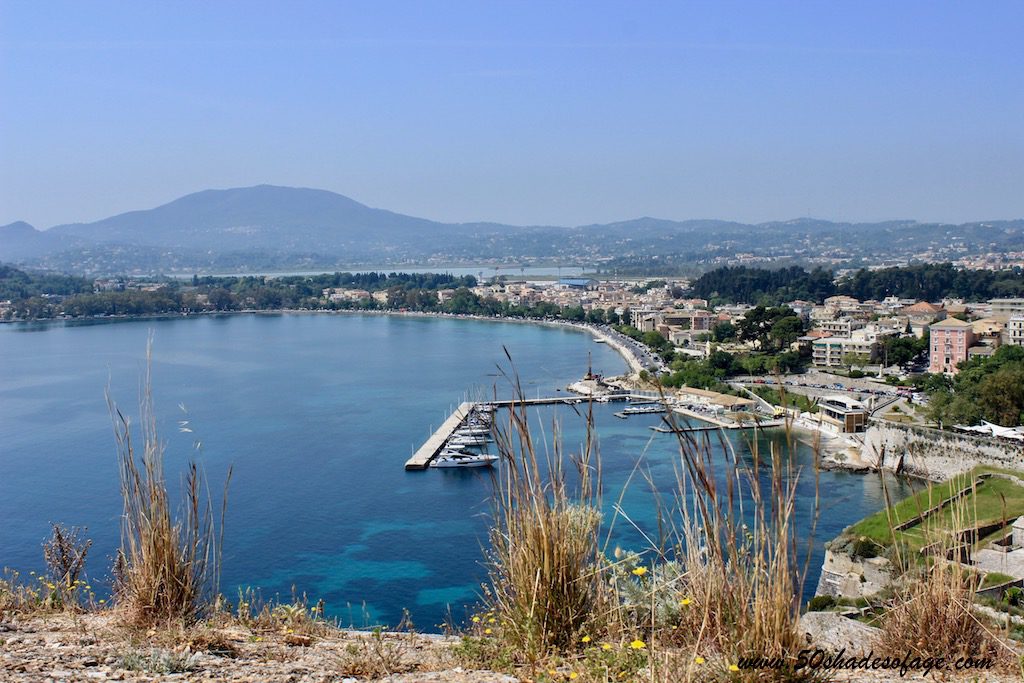 Views from the Old Fort Lighthouse

If the Old Fortress isn’t enough and you are hungry for more history, stories of battles and sieges, then there is a New Fortress opposite the old, separated by Old Corfu Town, overlooking the old port area. The New Fortress was constructed in 1576 by the Venetians with underground cisterns, powder magazines, artillery positions and underground halls. 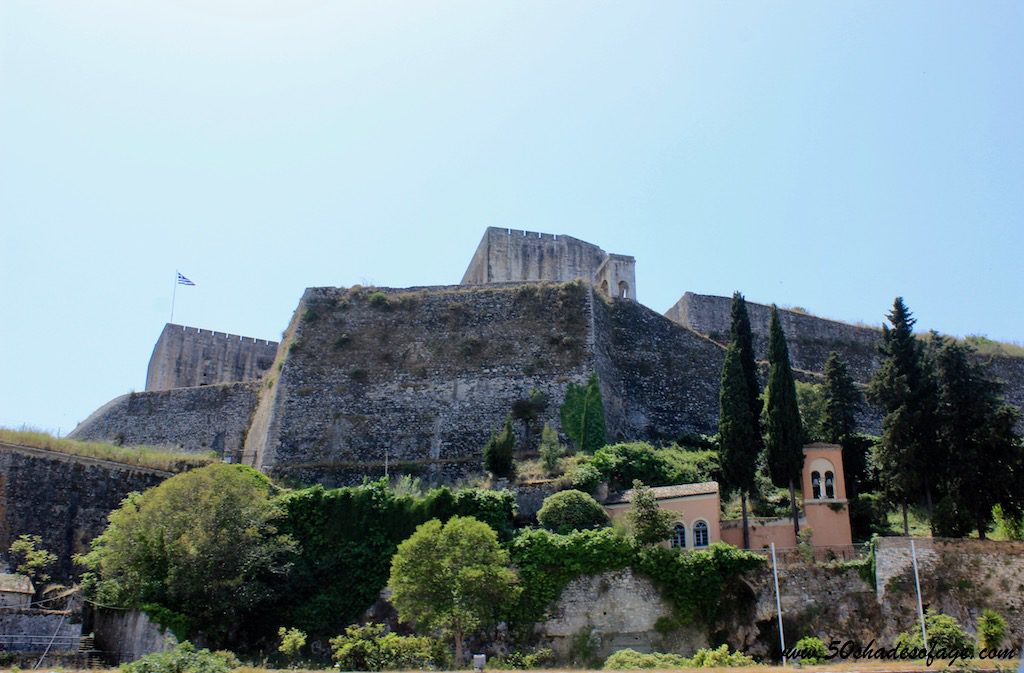 Once we left the Old Fortress we wandered through the extensive gardens adjacent to the esplanade to The Liston with arcaded terraces, Venetian lanterns and fashionable cafes, where you can sit and enjoy a coffee and people-watch. 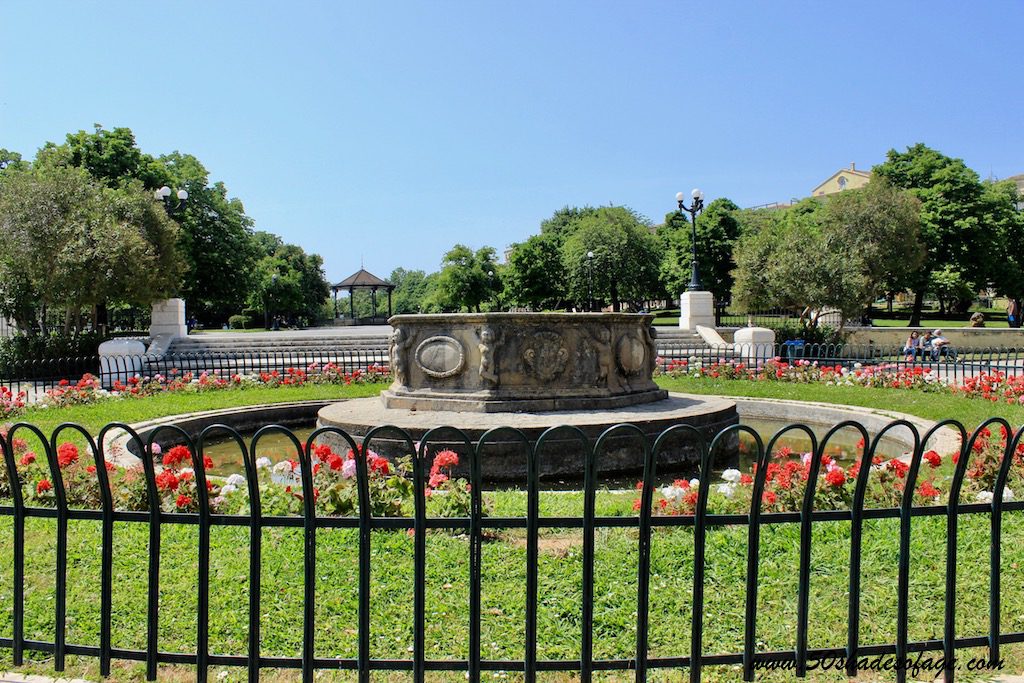 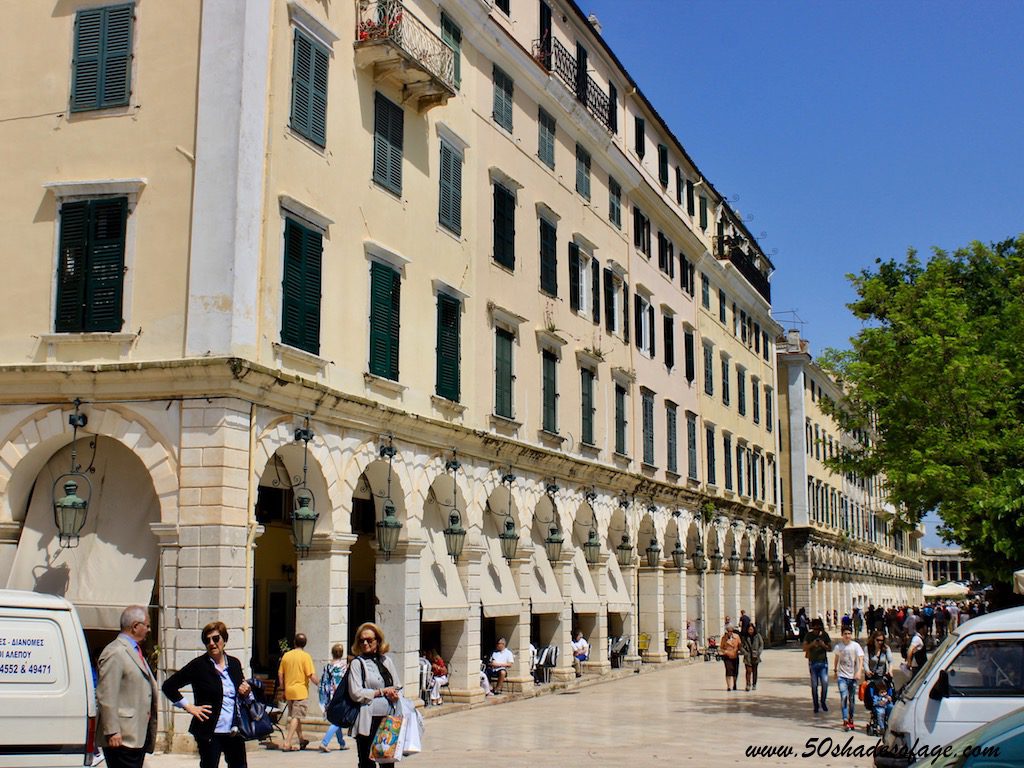 The Liston in Corfu Old Town

The Palace of Saints Michael and George, which now houses the Corfu Museum of Asian Art and the Municipal Art Gallery, is at the far end of The Liston. 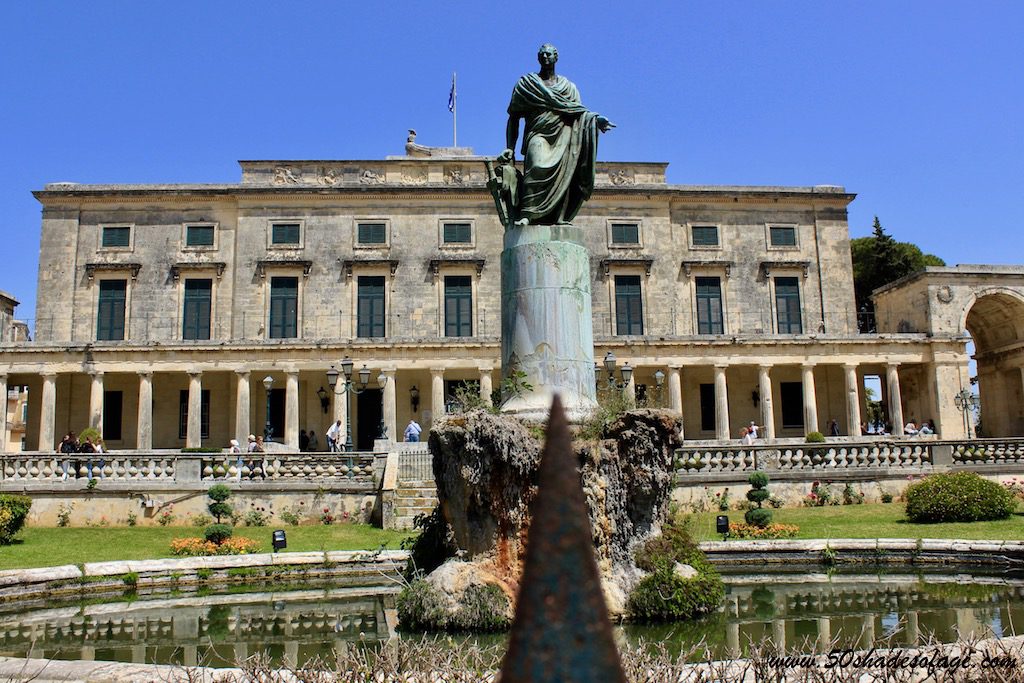 I could feel the lure of the hundreds of narrow alleyways and little streets branching off The Liston, brimming with gorgeous shops, and sauntered off into the maze! 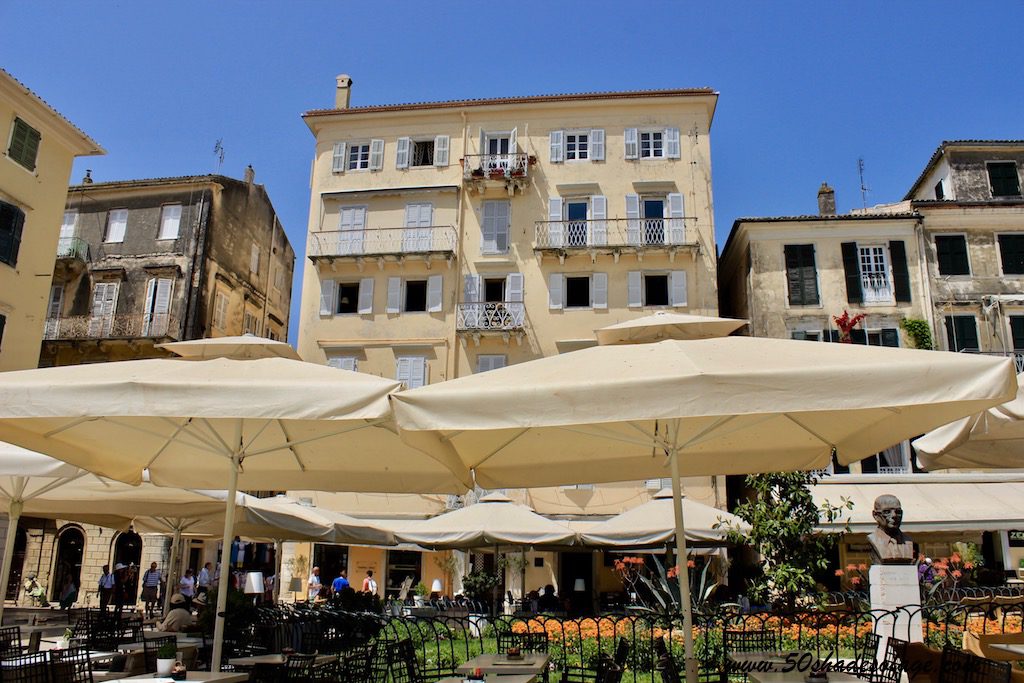 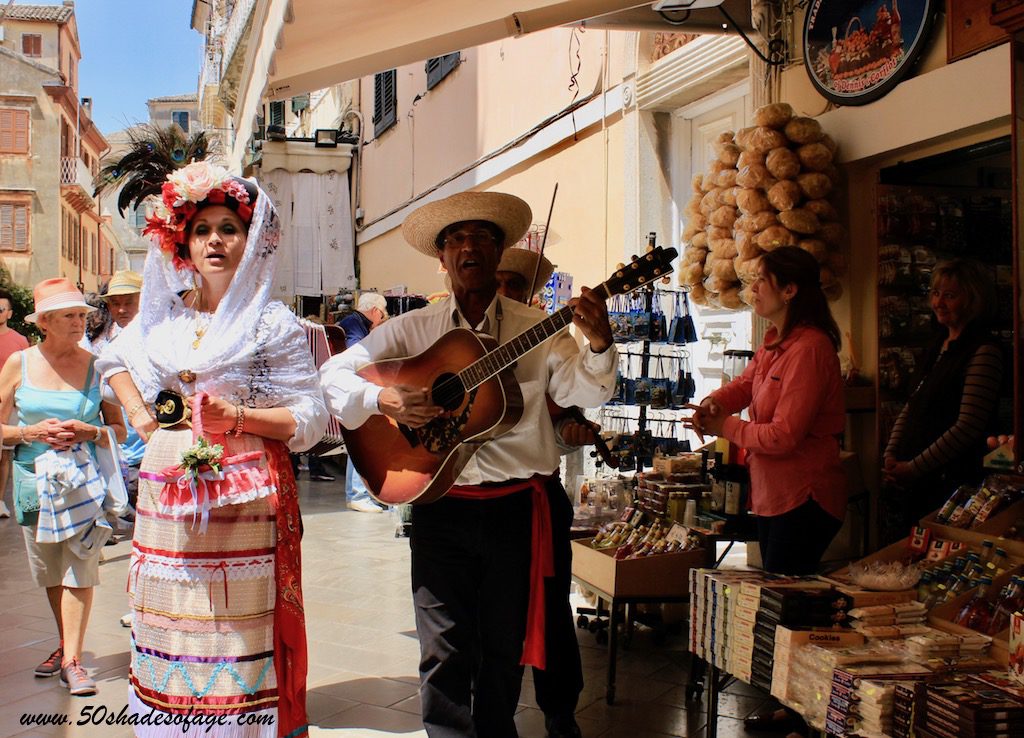 I re-appeared many hours later with my loot, comprising of silver jewellery, lavender soaps, lava stone earrings and a small leather handbag. 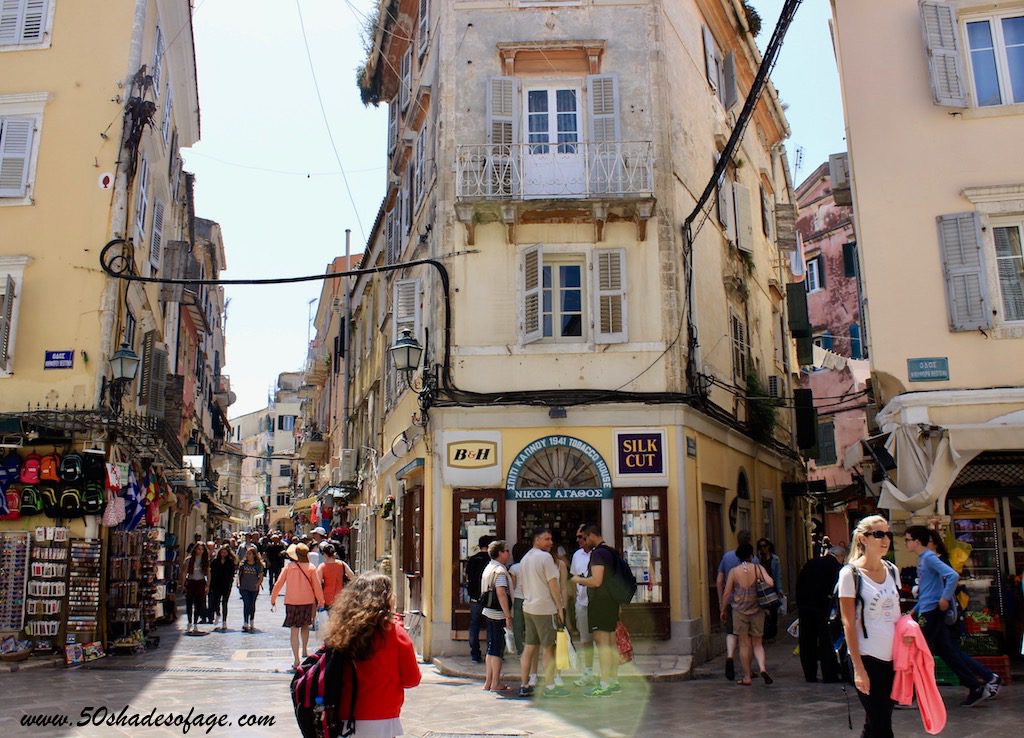 What to see on the rest of Corfu Island

Time simply did not permit for us to see some of the other wonderful parts of this island, however if you were staying for a few days you would certainly explore more of the island. 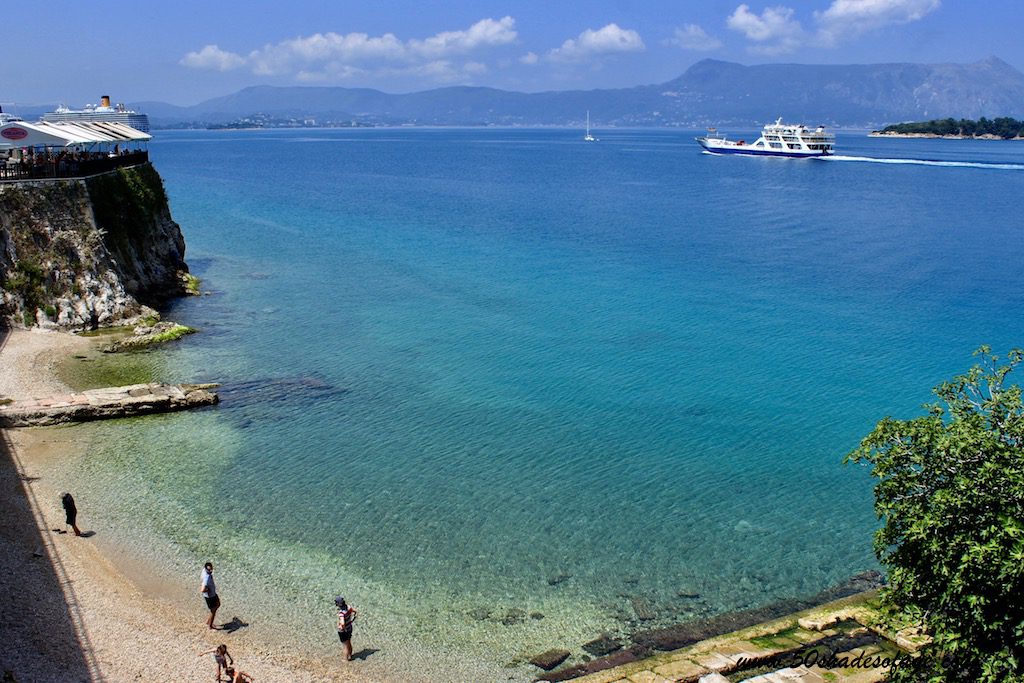 One of the Beaches in Corfu 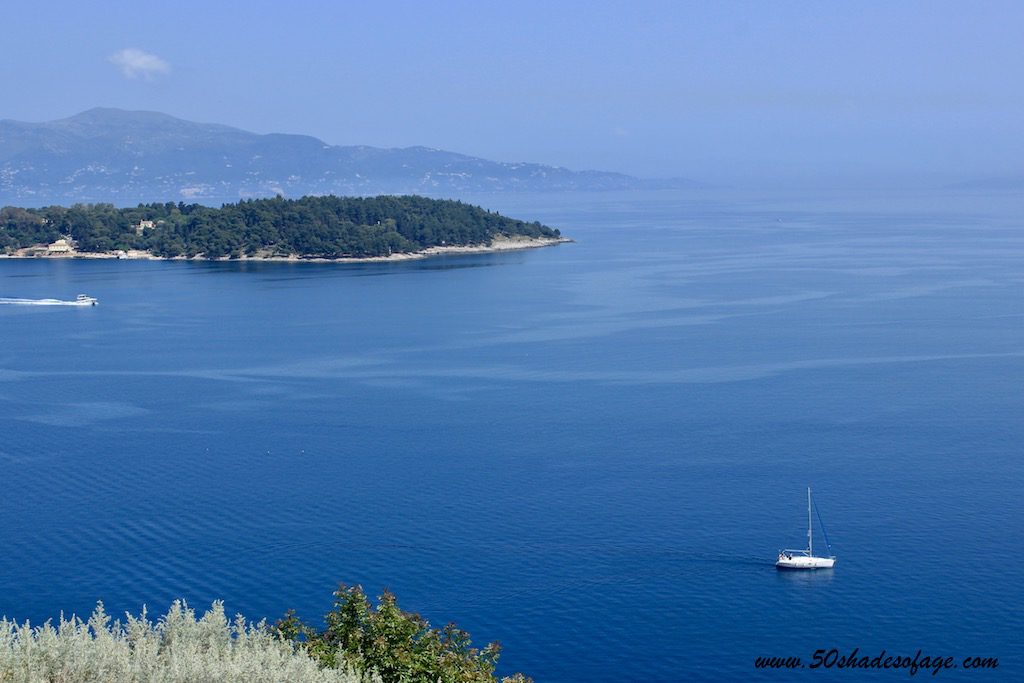 More views from the island of Corfu

Our friends we were travelling with, remarked that they could easily see themselves dropping out of the rat race and sailing on a yacht cruising the Greek Isles. Corfu was just a small sample of the richness and diversity of the Ionian and Aegean group of Greek Islands. It truly fulfilled my dream of a Greek Island escape and made me think I will need to return to see more.

Spread the love
CorfuGreeceGreek IslandsIonian IslandsKerkyraMediterranean Cruise
By 50 Shades, June 26, 2017 Kathy was a 50 something year old when she started up this blog 6 years ago, but has since turned over another decade and is now in her early 60s. She is married with two adult children and lives on the Tweed Coast of New South Wales, Australia. Kathy enjoys living life to the fullest and loves to keep fit and active by maintaining a healthy diet and exercising regularly. Some of her interests include reading, photography, travelling, cooking and blogging! Kathy works part-time as a freelance writer but her real passion is travelling and photographing brilliant destinations both within Australia and overseas and writing about it.