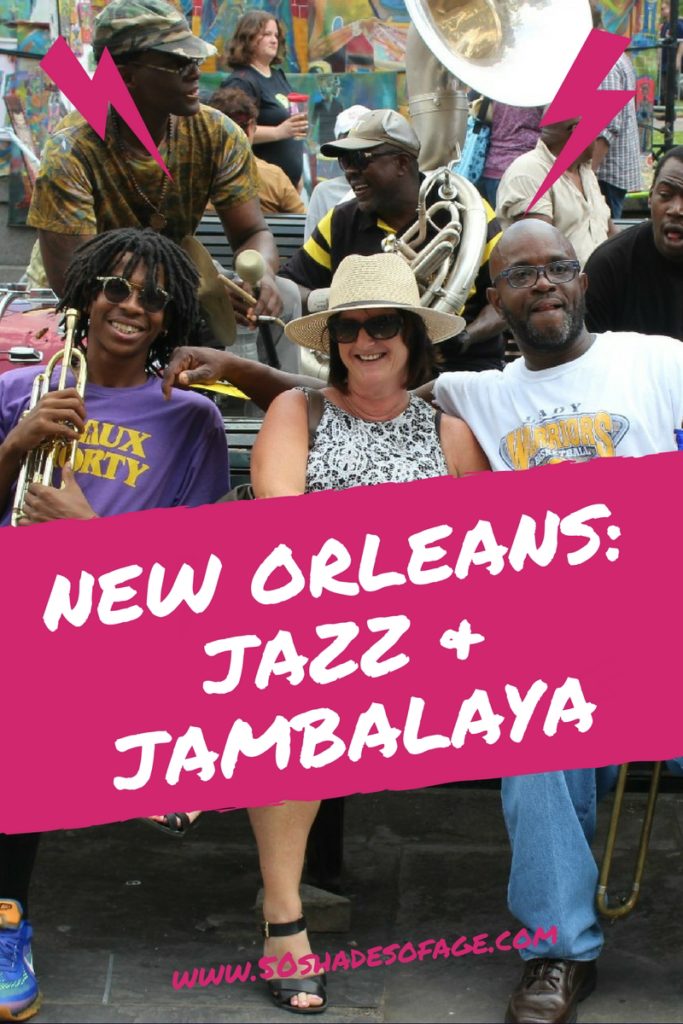 In the deep south of Louisiana USA, is the Jazz capital of the world, New Orleans, that is not only famous for its Jazz and Blues music but for its cuisine. It’s such a colourful vibrant city with the historic French Quarter with scores of Jazz & Blues Clubs and a variety of street musicians, artists, fortune-tellers and mimes. This is why I would refer to New Orleans: Jazz & Jambalaya.

Geographically it is located on the Mississippi River, near the Gulf of Mexico and the Port of New Orleans which is the fifth largest port in the United States. The city is named after the Duke of Orleans, who reigned as Regent for Louis XV from 1715 to 1723, as it was established by French colonists and strongly influenced by their European culture. Hence the French architecture in the historic French Quarter of the city. 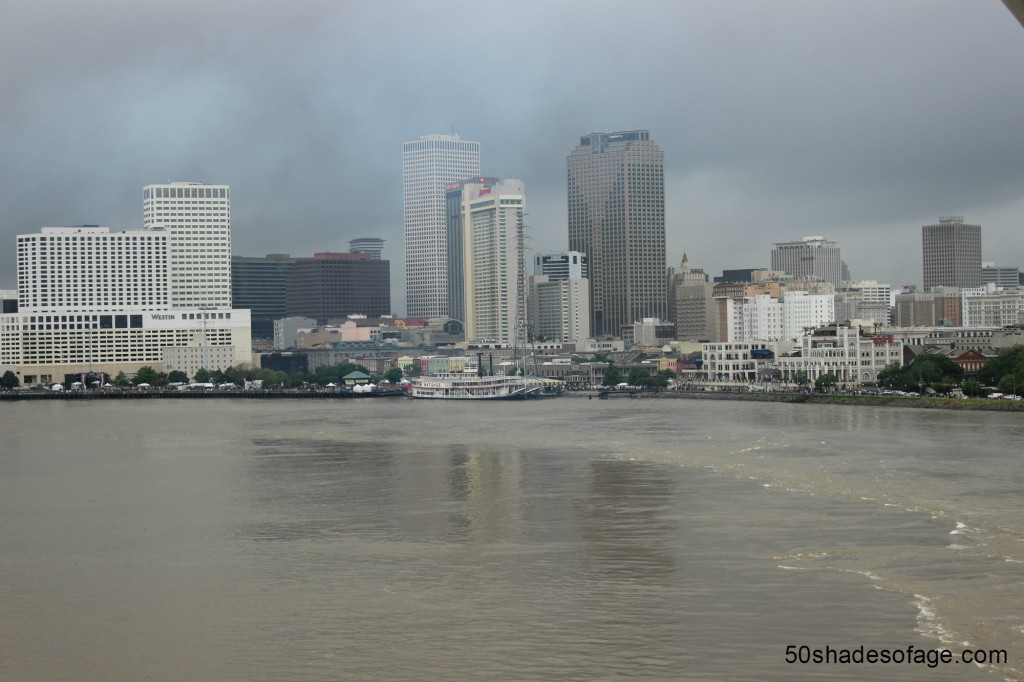 Like Darwin, in the Northern Territory of Australia, it has survived being almost completely destroyed by several natural disasters.  In 1965, flooding from Hurricane Betsy killed dozens of residents, although the majority of the city remained dry. Then in 2005 more than 1,500 people were recorded as having died during Hurricane Katrina, when the Federal Levee System failed to protect the city. 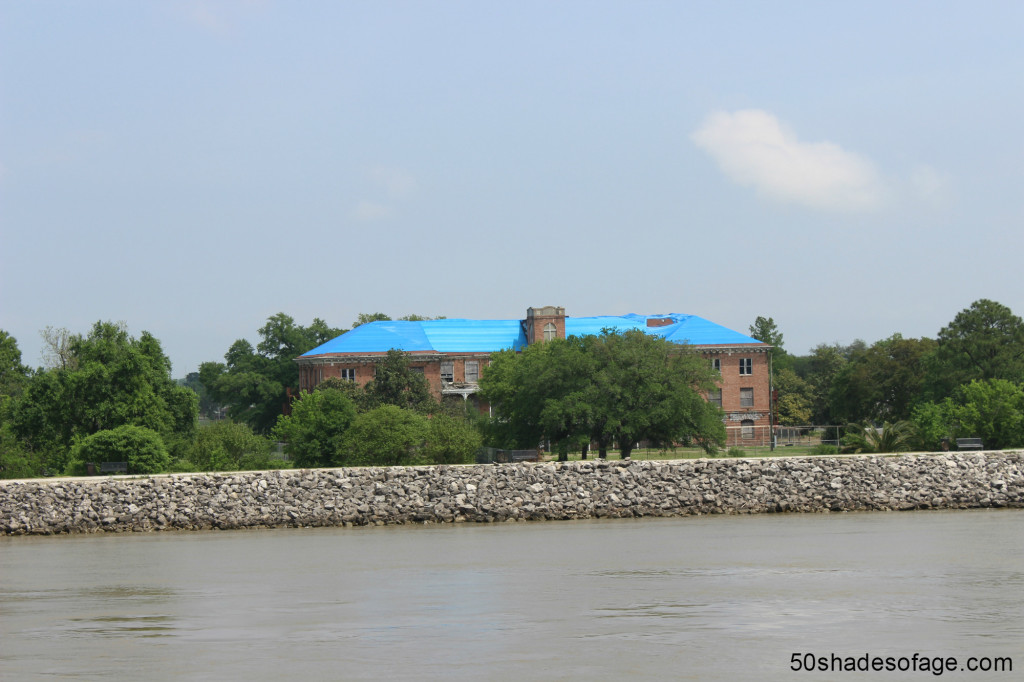 Hurricanes pose a severe threat to the area, and the city is particularly at risk because of its low elevation, and because it is surrounded by water from the north, east, and south, and Louisiana’s sinking coast. This is evidenced during the flight into the city where all you can see is wetlands and the huge expanse of the Lower Mississippi River.

The Mississippi ranks as the fourth longest and tenth largest river in the world. The river either borders or passes through the states of Minnesota, Wisconsin, Iowa, Illinois, Missouri, Kentucky, Tennessee, Arkansas, Mississippi, and Louisiana. The Mississippi Valley is one of the most fertile agricultural regions of the country, which resulted in the river’s storied steamboat era. The steamboats are still in existence today and are a major tourist attraction to the area. 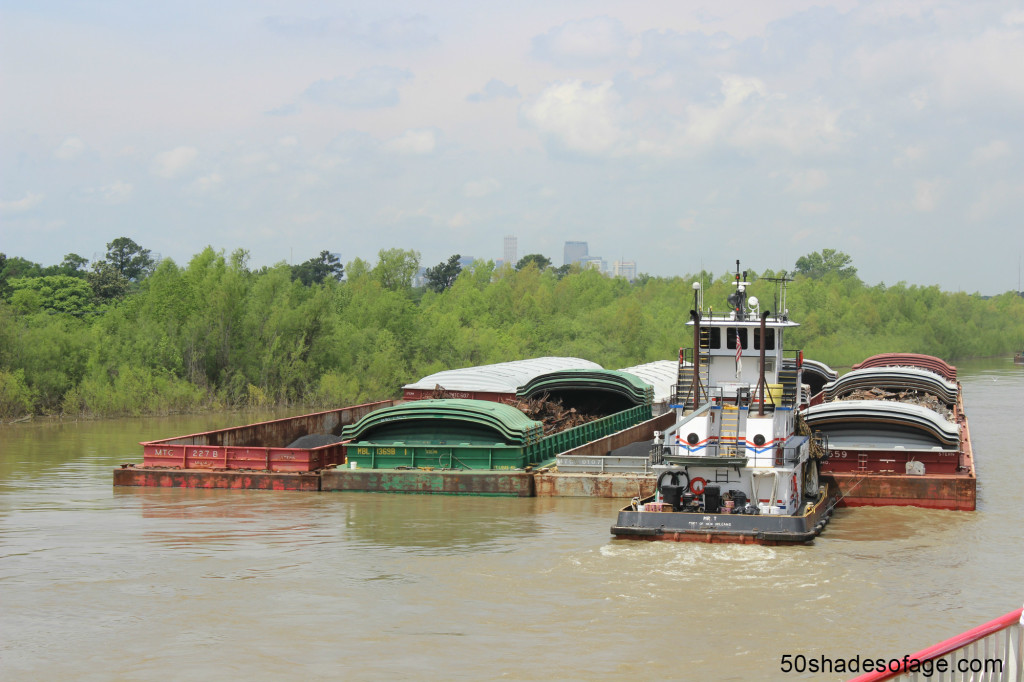 Barge on the Mississippi River

Our three days in New Orleans was a whirlwind affair of taking in the sights of this upbeat vivacious city. We had timed it perfectly as the French Quarter Jazz Festival was in full swing and the city was alive with entertainment. This is the largest free music festival in the South with a special focus on New Orleans’ music and food. The festival offers 20 performance stages and more than 90 food and beverage booths set among one of the countries most historic neighbourhoods. It was like a non-stop street party that started in the morning and continued late into the night. 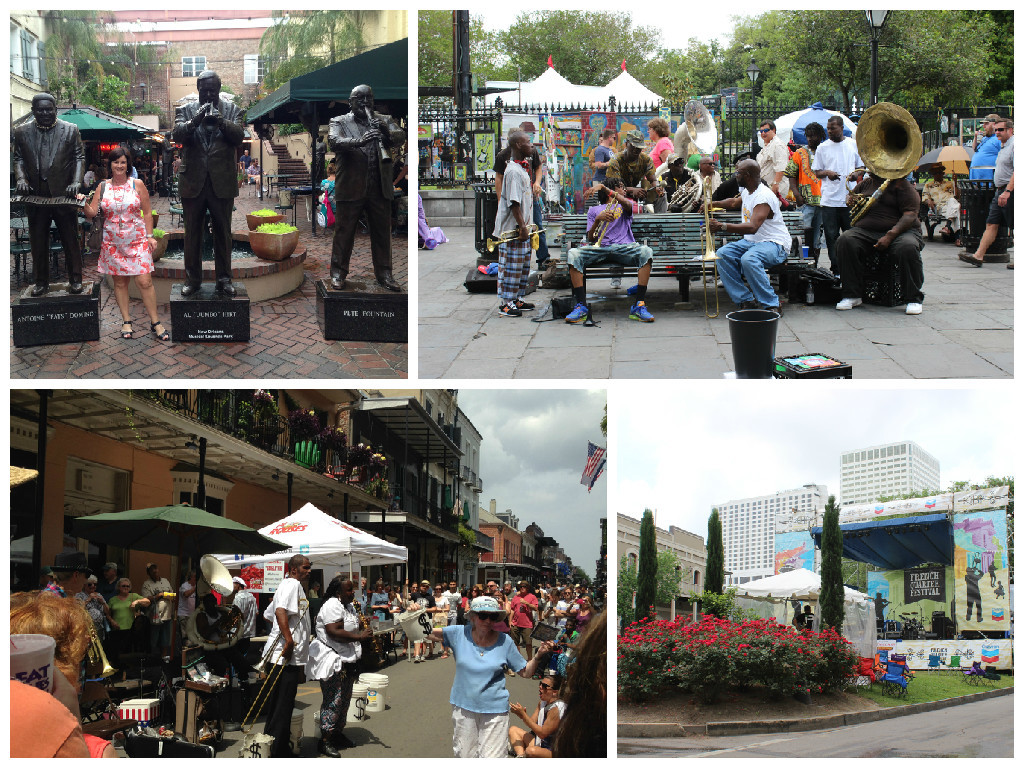 But just as interesting was strolling through the cobbled streets of the original settlement of New Orleans, called Vieux Carré, French Quarter or simply The Quarter. This is the oldest neighbourhood in the city and was established by the French in 1718, as New Orleans was a valuable site for trade due to its strategic position along the Mississippi River. 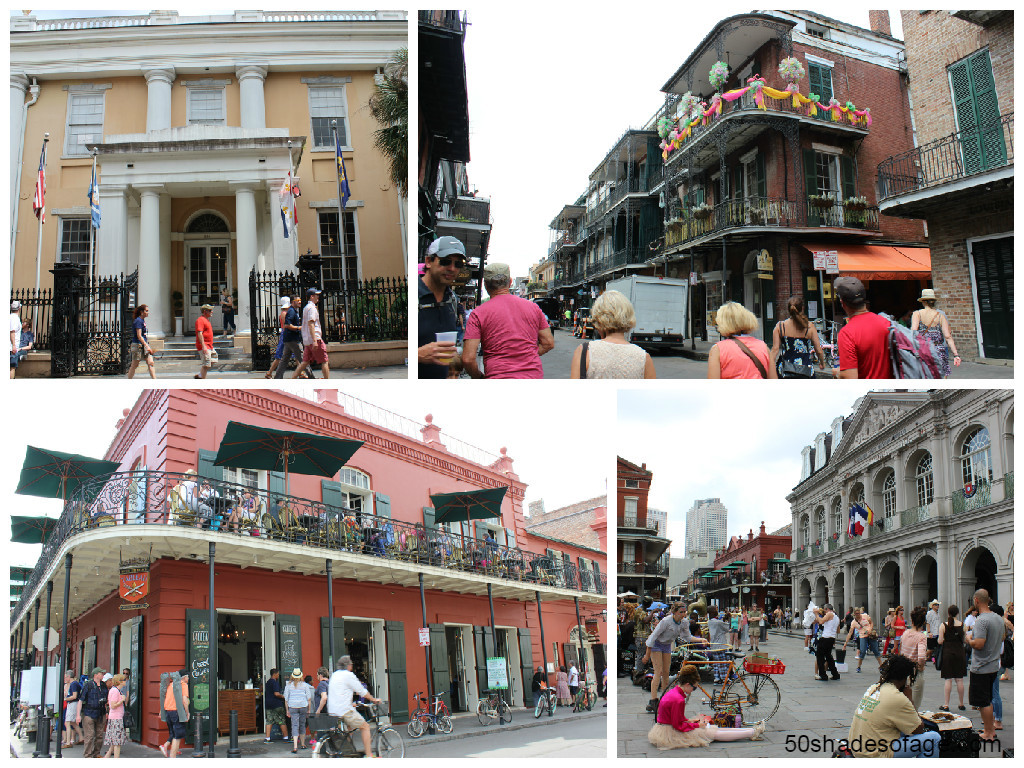 The French and Spanish inspired architecture of the buildings was amazing in The Quarter. Balconies are adorned with intricate ironwork, courtyards filled with lush greenery and beautiful fountains. Life in the Quarter centres around New Orleans’ most famous landmark, Jackson Square. Originally known as the Place d’Armes, the square was renamed to honour Andrew Jackson, the hero of the Battle of New Orleans. Overshadowing the Square is St Louis Cathedral. 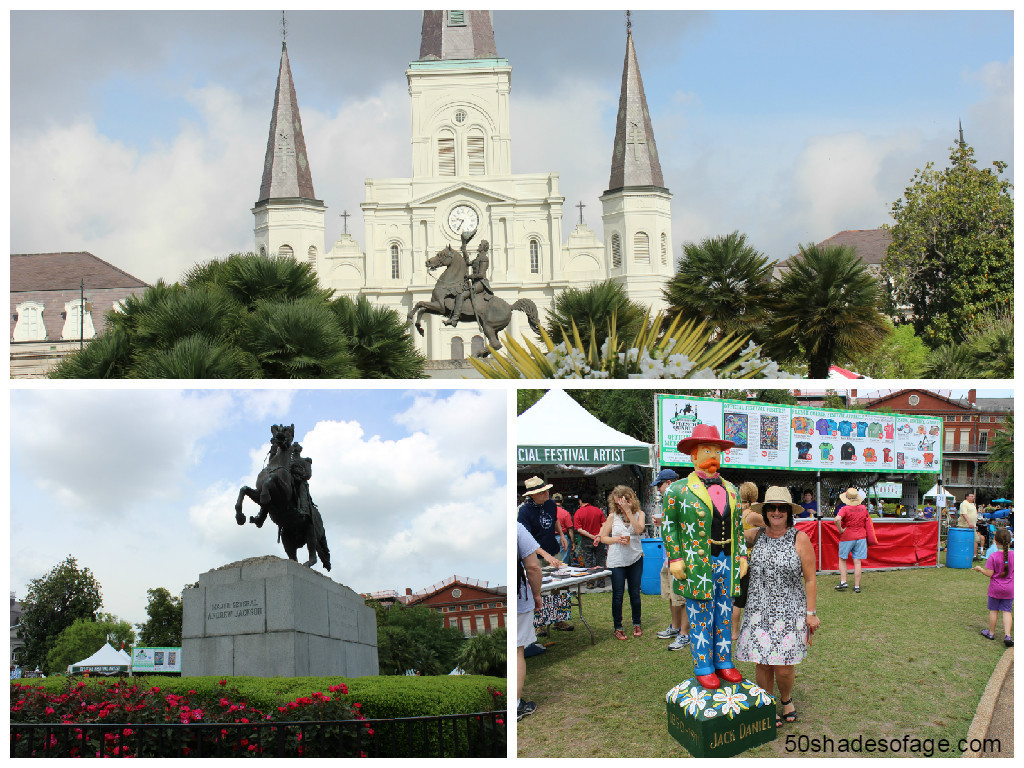 Bourbon Street is the nightlife precinct of The Quarter and is bursting with bars, restaurants and nightclubs. You can order an alcoholic drink to go as it’s legal to drink on the streets in New Orleans, put on your beads, (a tradition on Bourbon Street for women to bare their breasts to the crowd for beads!), and take a stroll down New Orleans’ most famous party street. There are many clubs that have different attractions like: riding a mechanical bull, taking in a sexy burlesque performance or jamming to the sounds of traditional jazz. 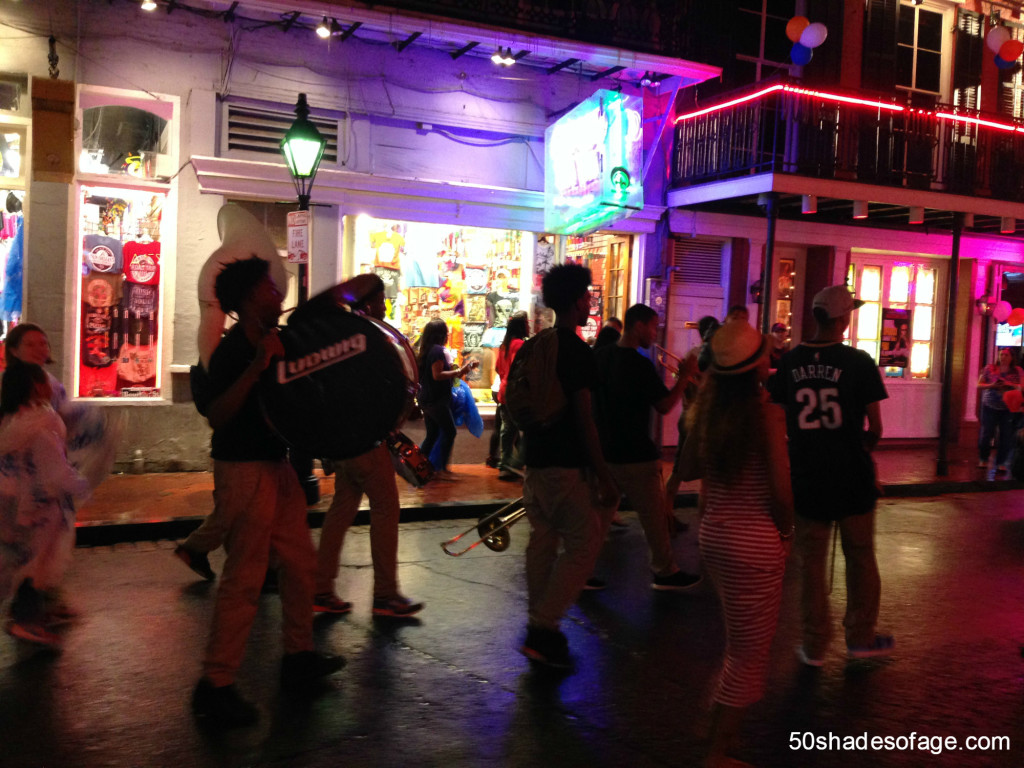 Now if the architecture of the French Quarter isn’t enough to impress you, then a streetcar ride away is the Garden District, with its well-preserved collection of antebellum mansions, pristine gardens and southern charm. You can stroll around this district for hours taking in the tradition, opulence and beauty. 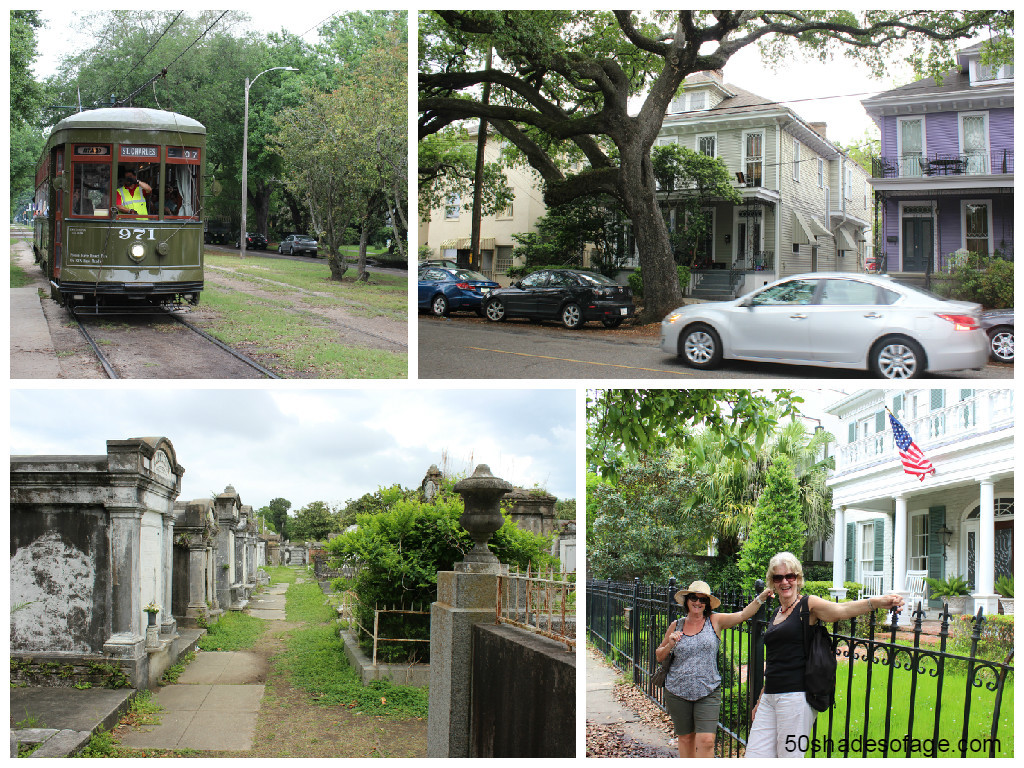 Also while you are there you must see the Lafayette Cemetery, the oldest of the seven cemeteries in New Orleans, where the deceased are interred above ground, a situation forced on the area because of the city’s high water table and below sea-level elevation.

On first sight it is a little macabre seeing these family-built tombs capable of interring as many as a dozen deceased, jutting above ground like small marble or granite houses. We took a guided tour through the cemetery and learnt a lot about the interment process and the famous people that were interred here.

Rollin’ on The River

We took a cruise aboard Steamboat Natchez, the last authentic steamboat on the Mississippi River, and coasted down the river with live narration which gave us an interesting overview and history of the city, the port and the river. There are several cruises to choose from: an evening jazz cruise with dinner, harbour jazz cruise or the Sunday brunch cruise.

It was a great way to see the city of New Orleans from another angle and also learn about the history of the steamboats and how they were paramount to the practical large-scale transport of passengers and freight both up and down river.

Whilst you are in New Orleans you must try some of their local cuisine. Try dishes such as Gumbo (a spicy meat, chicken or seafood stew with okra), Crawfish Etoufee (a Cajun seasoned Crawfish stew), Jambalaya (a spicy chicken, sausage or seafood stew), Red Beans & Rice, Muffalettas (a massive sandwich) and Beignets (doughnuts). We also tried some of the locally caught seafood from the Mississippi, Redfish and Shrimps (Prawns). 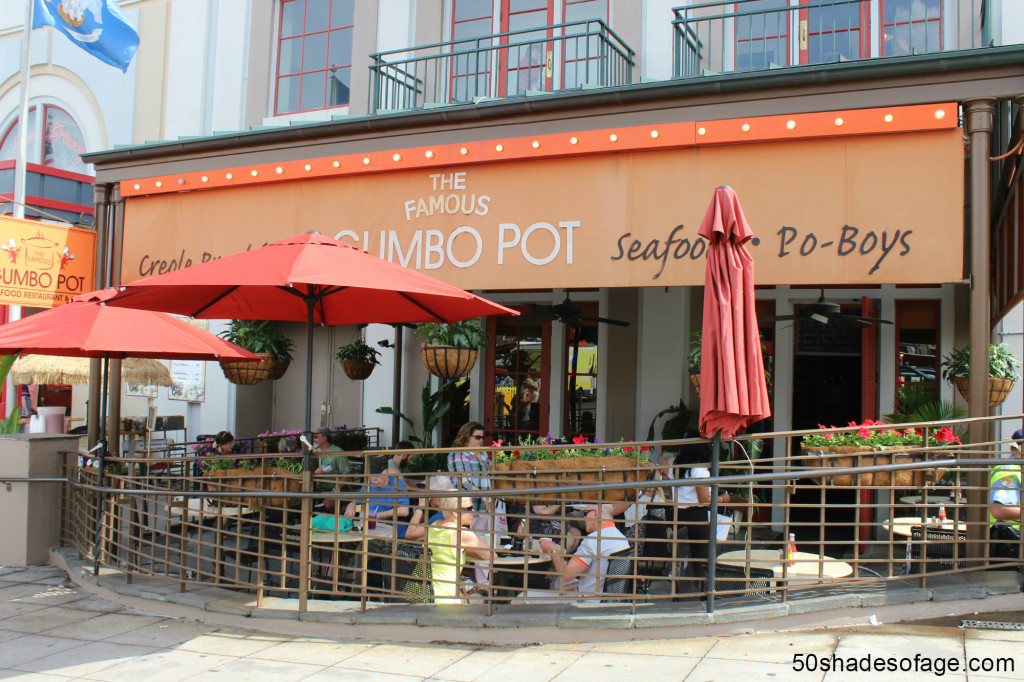 Other Points of Interest

Our three days in New Orleans really wasn’t enough to do all there is to do and see in this wonderful city. Other points of interest are:

With a city that prides itself on Southern hospitality and with a motto of “laisser les bon temps rouler,” or “let the good times roll”, it is little wonder that New Orleans was both captivating and exciting. We could not have asked for a better entree to our cruise holiday!

N.B: I promise I did not flash my breasts for beads whilst I was walking down Bourbon Street. (I think New Orleans have had enough natural disasters, without adding to the tally!)

Spread the love
LouisianaMississippi RiverNew OrleansTravel USA
By 50 Shades, May 2, 2017 Kathy was a 50 something year old when she started up this blog 6 years ago, but has since turned over another decade and is now in her early 60s. She is married with two adult children and lives on the Tweed Coast of New South Wales, Australia. Kathy enjoys living life to the fullest and loves to keep fit and active by maintaining a healthy diet and exercising regularly. Some of her interests include reading, photography, travelling, cooking and blogging! Kathy works part-time as a freelance writer but her real passion is travelling and photographing brilliant destinations both within Australia and overseas and writing about it.