Gorgeous Geikie Gorge in The Kimberley 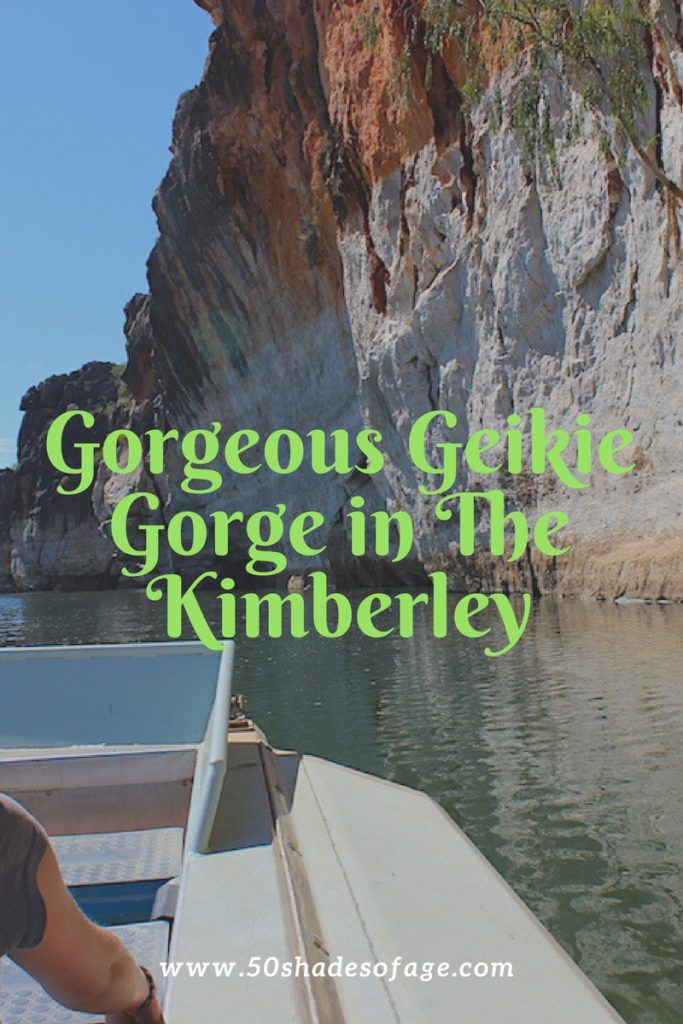 The vast region of the Kimberley in North Western Australia is one place where you can gorge yourself on gorgeous gorges, if you are into that type of thing. The trouble is that the majority of gorges are only accessible by 4WD with sturdy offroad camper trailers. However we discovered one near the town of Fitzroy Crossing, the gorgeous Geikie Gorge in the Kimberley, known by the indigenous people by its Aboriginal name, Darngku.

We headed 420 kms east from Broome across the vast savannah land, with mostly dried up creeks and river crossings and hundreds of ancient Boab trees, to Fitzroy Crossing. The small town is set on the banks of the Fitzroy River and is a great base to explore Tunnel Creek, Windjana Gorge and nearby Geikie Gorge. 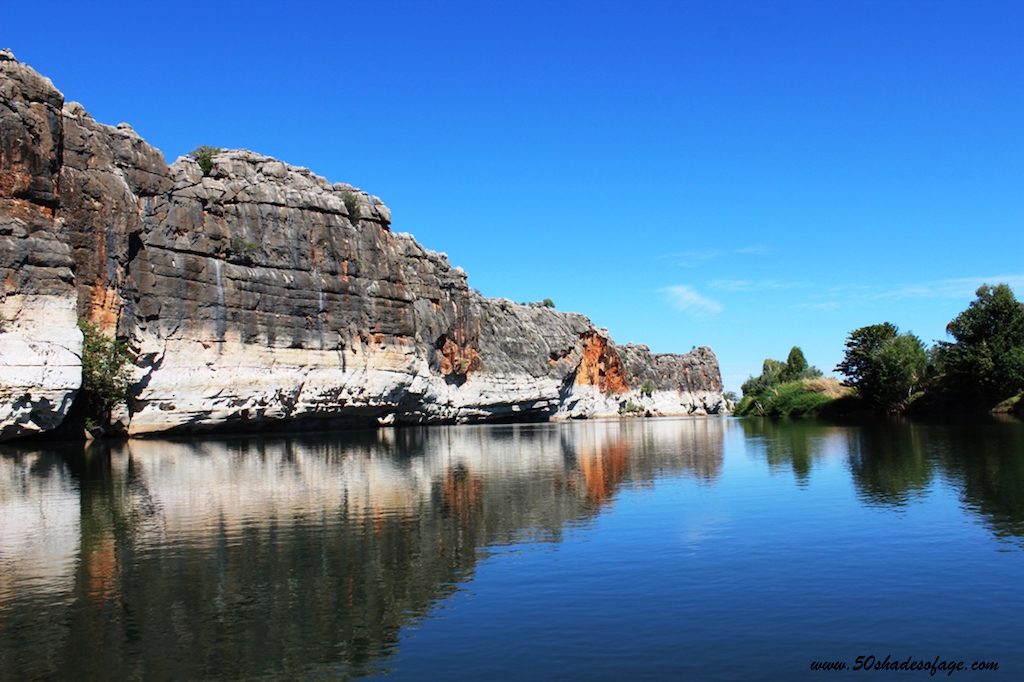 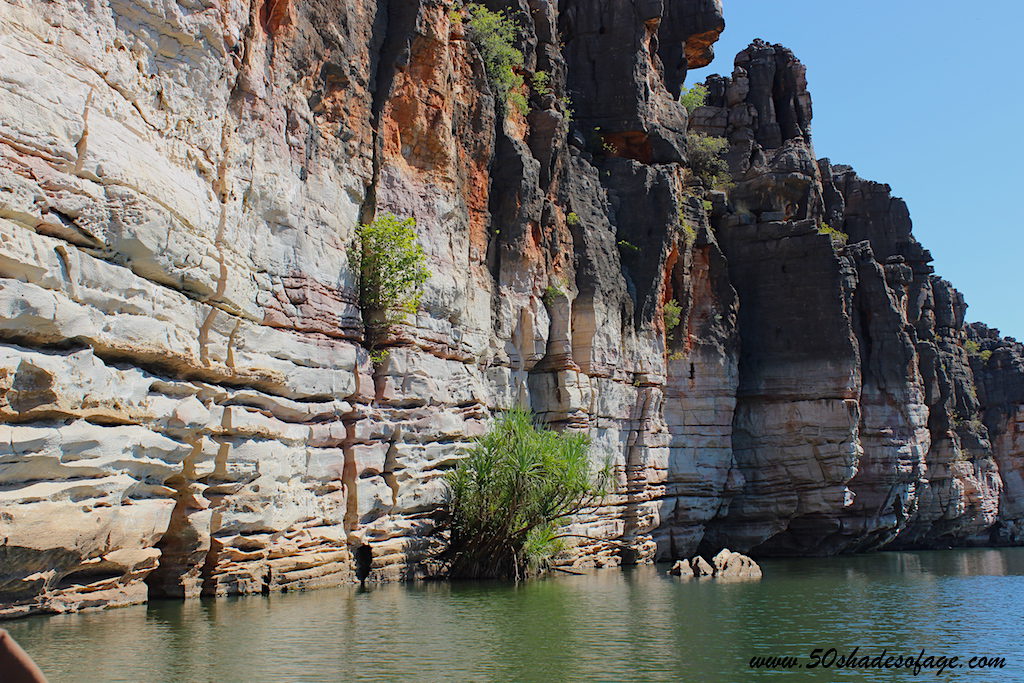 The bleached and eroded limestone walls of the gorge 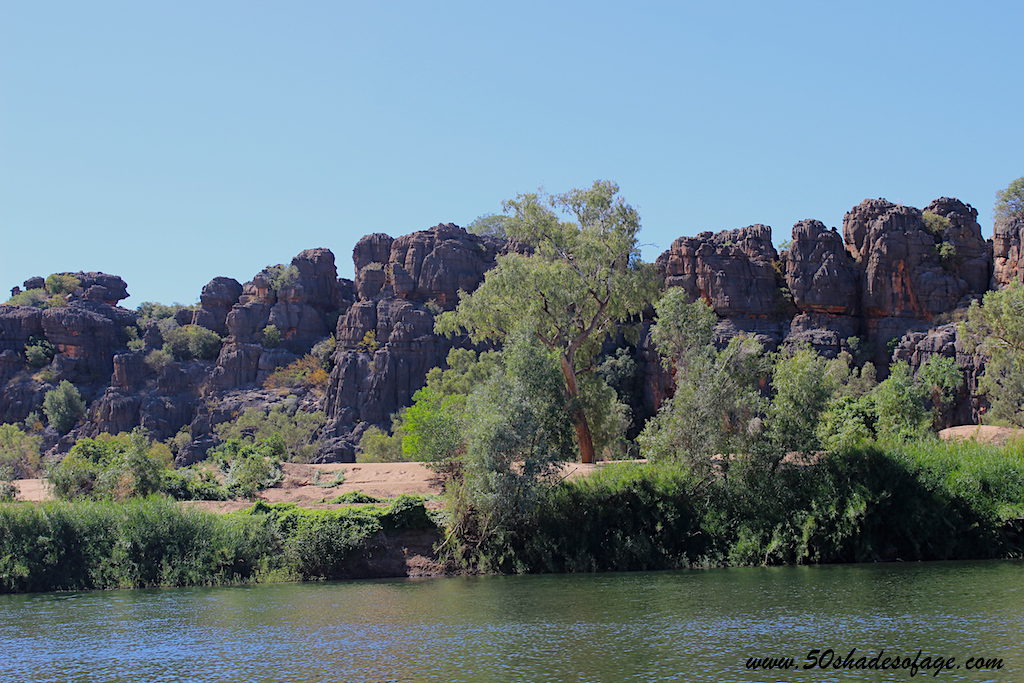 On arrival to the information hut at Geikie Gorge National Park we booked a boat tour and read the interpretive signage. We learnt that the Geikie Gorge had been carved by the Fitzroy River through part of an ancient limestone barrier reef that snakes across the west Kimberley. It was laid down in an ancient sea that covered a large part of the Kimberley in Devonian times, some 350 million years ago. It’s amazing to think that this region was once an ocean! 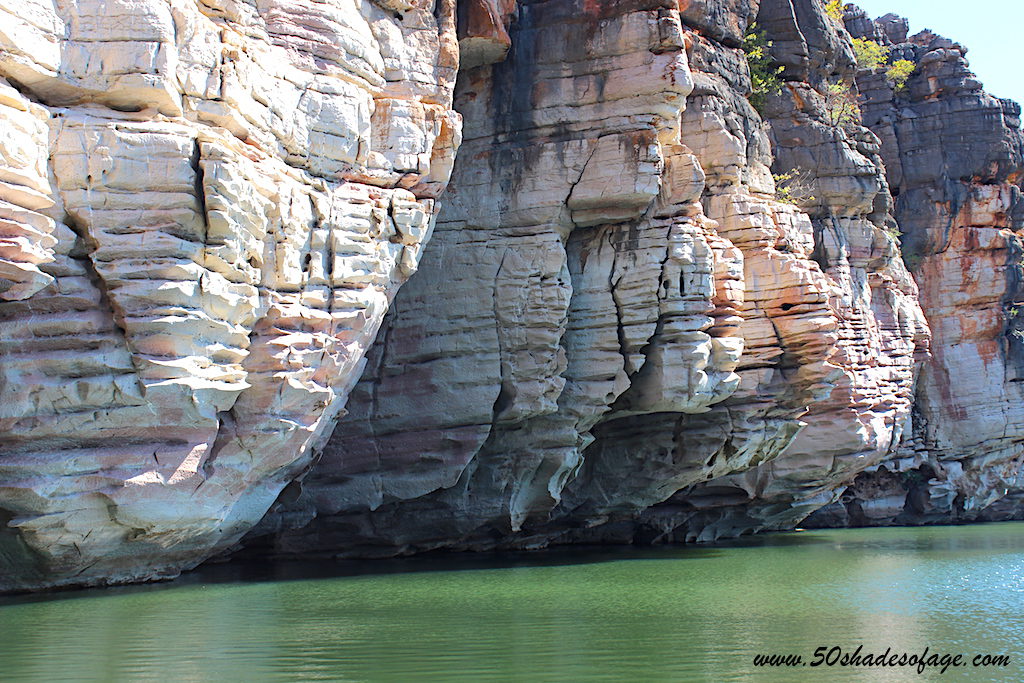 The limestone rocks have turned the water an emerald green colour

The best way to see the gorge is on a boat tour so we jumped aboard a leisurely morning boat cruise on the Fitzroy River, operated by CALM (Department of Conservation and Land Management). We meandered through the 30 metre deep carved gorge that is interestingly the limestone junction of the Oscar and Geikie Ranges. 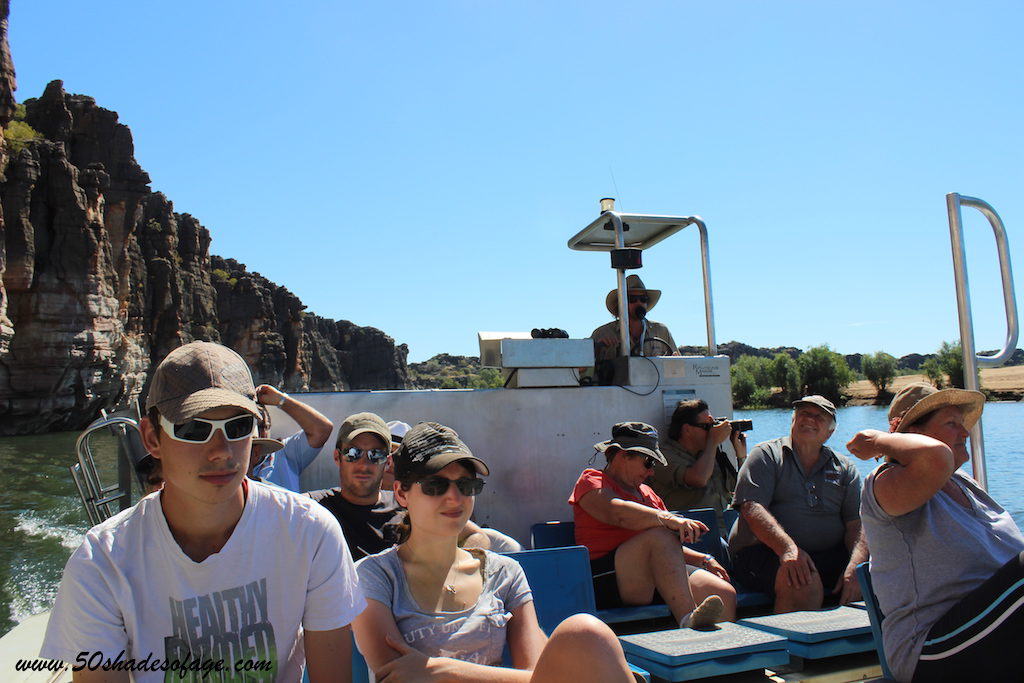 Boat tour down the gorge

We saw many freshwater crocodiles sunning themselves on the rocks or along the muddy shoreline of the river. We learned that it is also the habitat for the rare Leichhardt’s sawfish and coach whip stingray. You may also see birds such as sea eagles and rare purple-crowned fairy wrens. 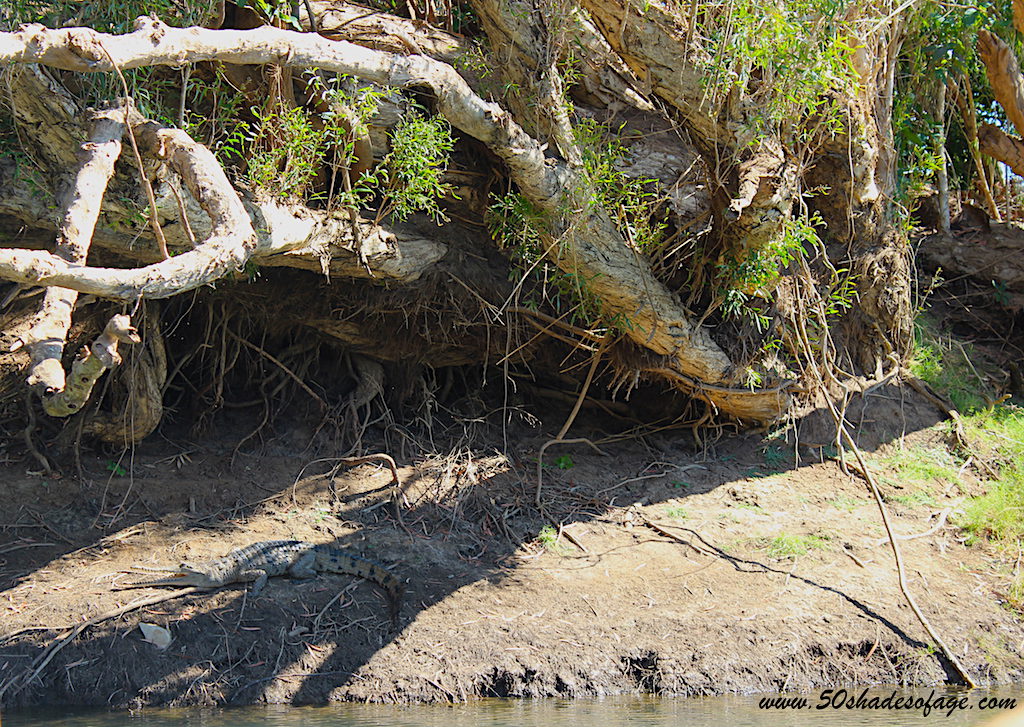 A Freshwater Crocodile sunbaking on the muddy banks

These wonderfully educational Geikie Gorge boat tours take place from May to October (Dry Season) and give an insight into the wildlife and geology of the gorge. They depart once or twice a day and are guided by one of the knowledgeable rangers. The tours last for about an hour and tickets can only be bought at the gorge prior to the tour. 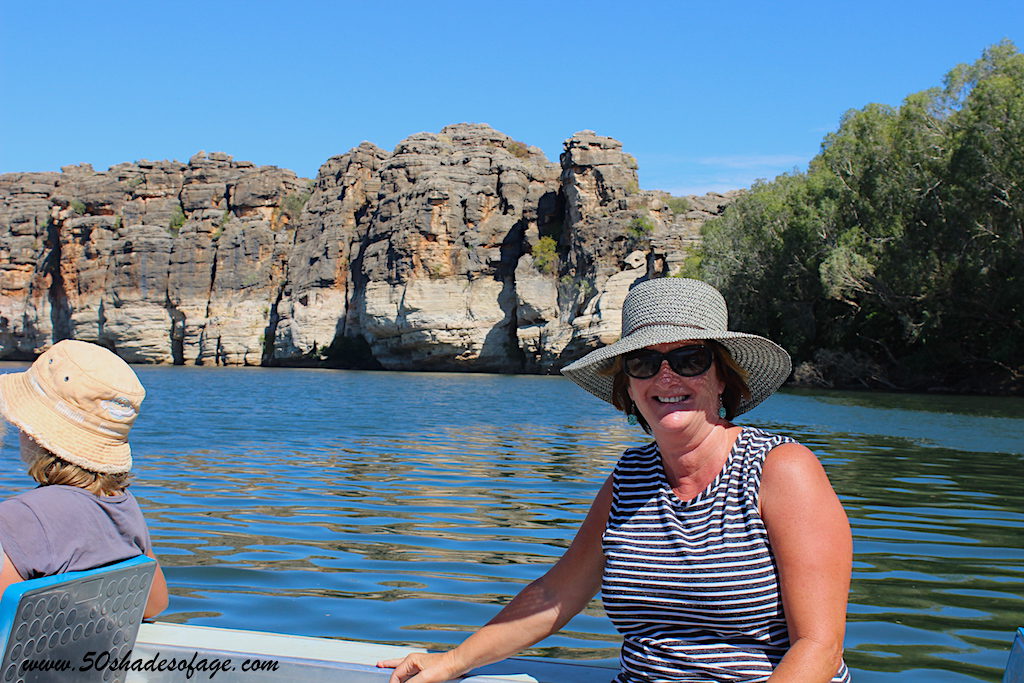 A Boat Tour is the best way to see the gorge

Cultural boat tours are guided by Bunuba Aboriginal people, whose connection to this land goes back to the Dreamtime. The guides have been authorised by their people to take visitors to places that you wouldn’t usually have access to, and they will share with you their knowledge of the flora and fauna, tell stories from their 30,000 year old culture, show you how to find bush foods and more. 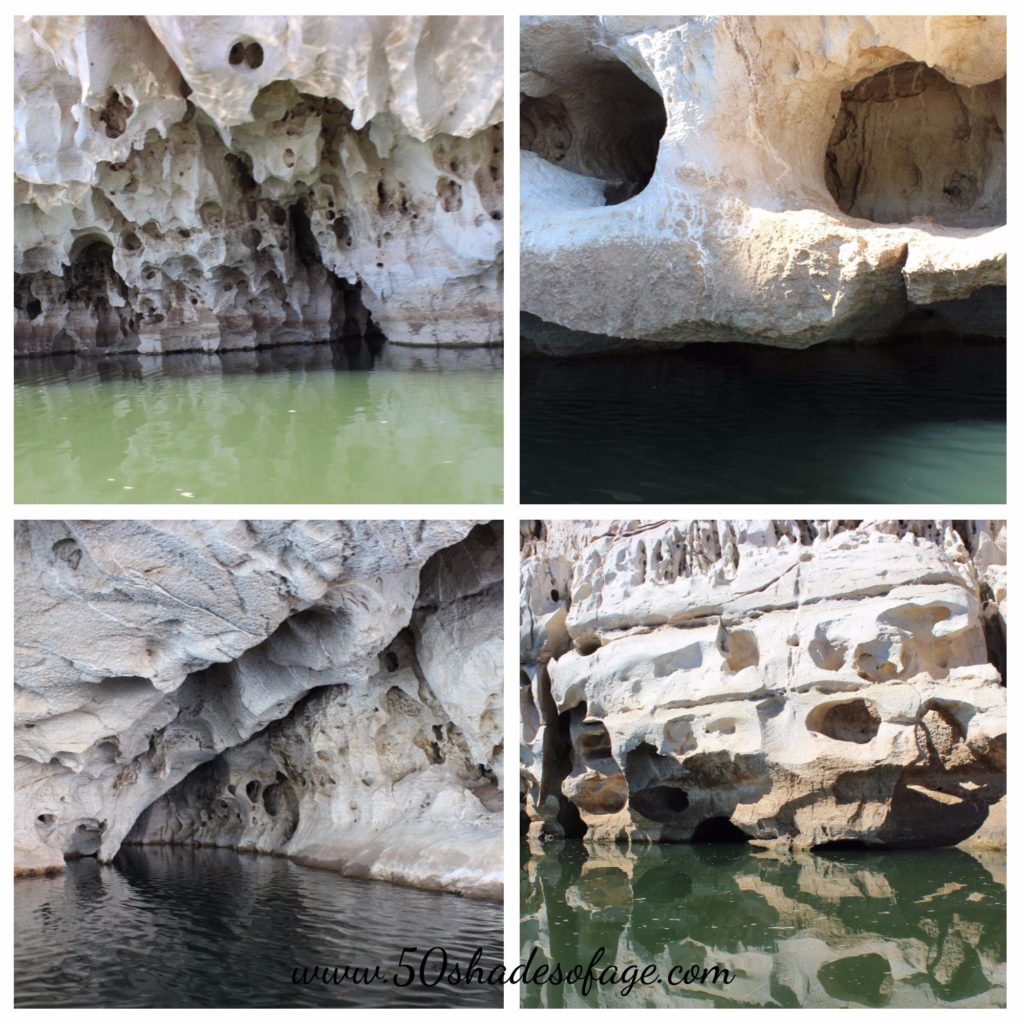 Close up shots of the limestone rocks in the gorge

This is an ideal tour for people who are keen to learn more about the rich Aboriginal history of the Kimberley region.

A pleasant and moderate degree of difficulty walk along the base of the west wall of the Gorge (3 kms return). It will take you about 1.5 hours to follow the trail across the floodplains to the point where the western gorge wall meets the river, and to return along the river bank. It’s the only walk that allows you good views of the bleached eastern gorge walls. 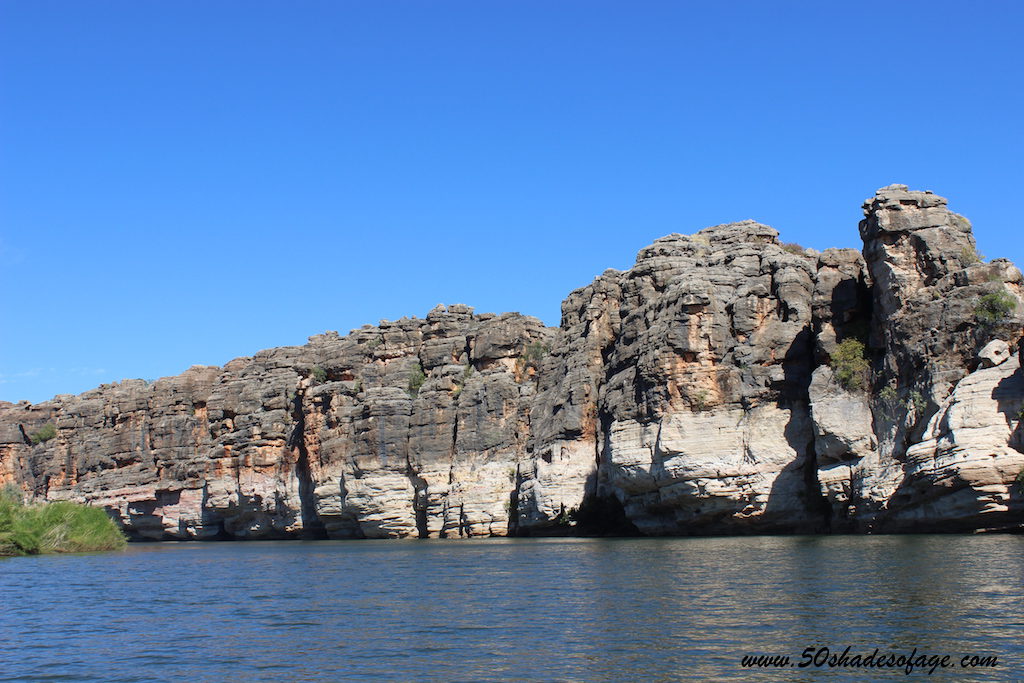 The colours of the rocks in the gorge are extraordinary

Prior to the boat tour we took an easy 20 minute return walk along the banks of the Fitzroy River to the sandbar, a popular fishing and swimming place. If you’re brave you can even go for a swim here, but beware of the crocs! 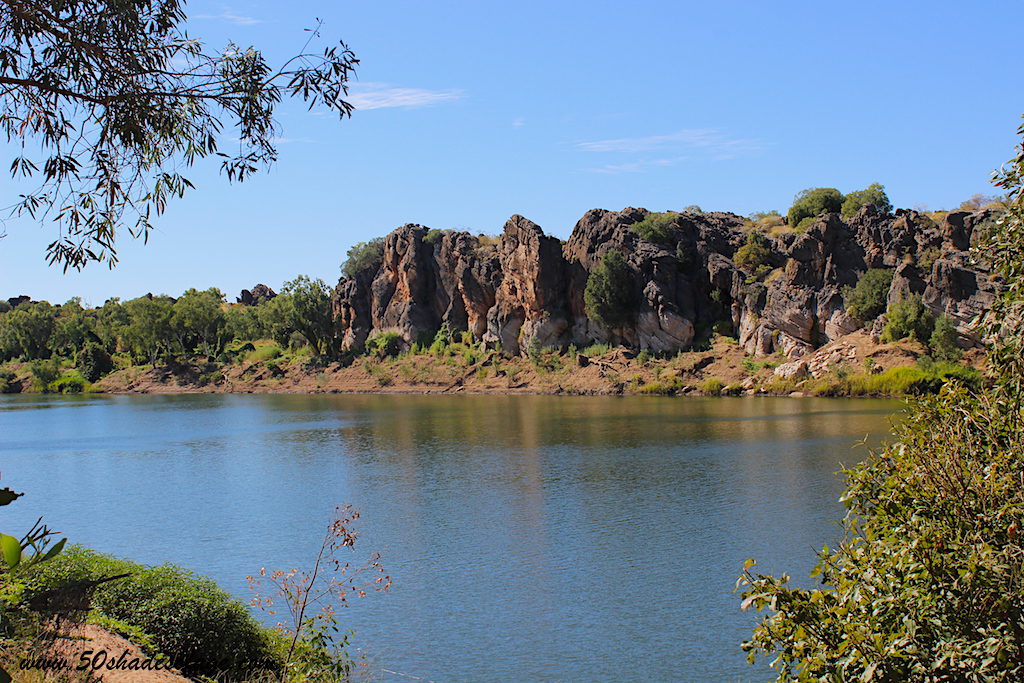 So if you’re travelling across the Kimberley and thinking that you are missing out on some of the spectacular gorges that the area has to offer, then this is your best option. Geikie Gorge with it’s bleached limestone and pitted rock walls were remarkable. It was yet another highlight of the dramatic landscapes of the Kimberley region.

Spread the love
Fitzroy CrossingFitzroy RiverGeikie GorgeGeikie Gorge National ParkNorth Western AustraliaThe Kimberley
By 50 Shades, May 5, 2017 Kathy was a 50 something year old when she started up this blog 6 years ago, but has since turned over another decade and is now in her early 60s. She is married with two adult children and lives on the Tweed Coast of New South Wales, Australia. Kathy enjoys living life to the fullest and loves to keep fit and active by maintaining a healthy diet and exercising regularly. Some of her interests include reading, photography, travelling, cooking and blogging! Kathy works part-time as a freelance writer but her real passion is travelling and photographing brilliant destinations both within Australia and overseas and writing about it.