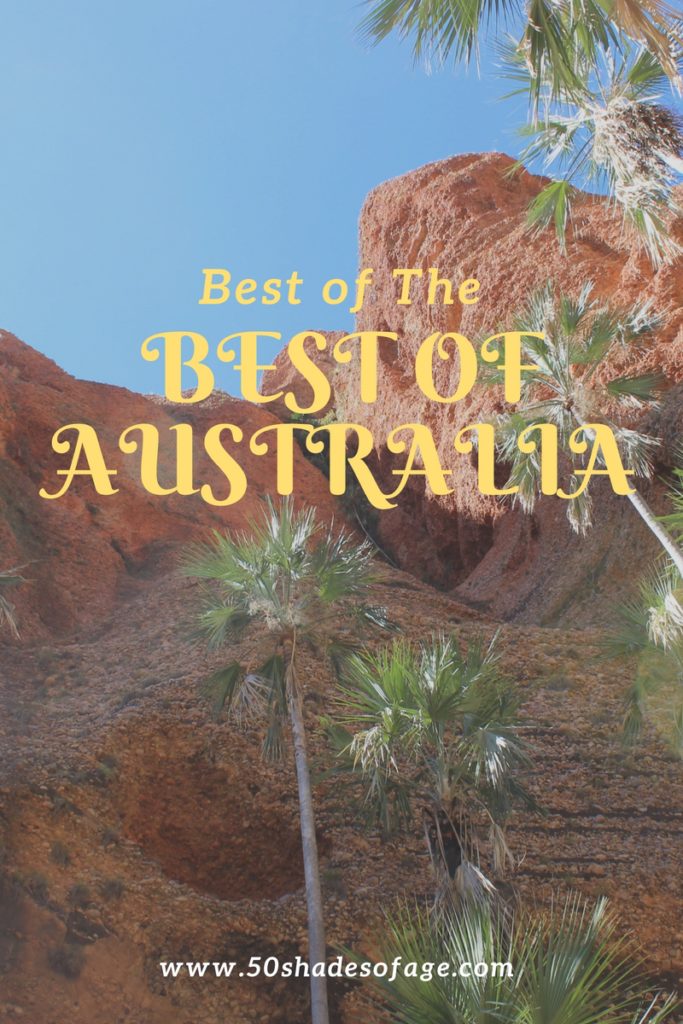 Beauty is in the eye of the beholder and when it comes to judging stunning landscapes captured through the lens of a camera it is a tough choice. Throughout my travels around Australia I was fortunate to witness and capture some of the most extraordinary beauty that compels me to present a photographic study of the best of the best of Australia.

Where does one start to describe the beauty of Australian landscapes from the jewel seas, to the white sanded beaches, to rugged outback terrain, to dense tropical rainforests, to untamed wilderness areas and barren desert plains? Like I said – it’s a tough choice. State by state and region by region, here are some of the most stunning landscapes that I have photographed during my travels: 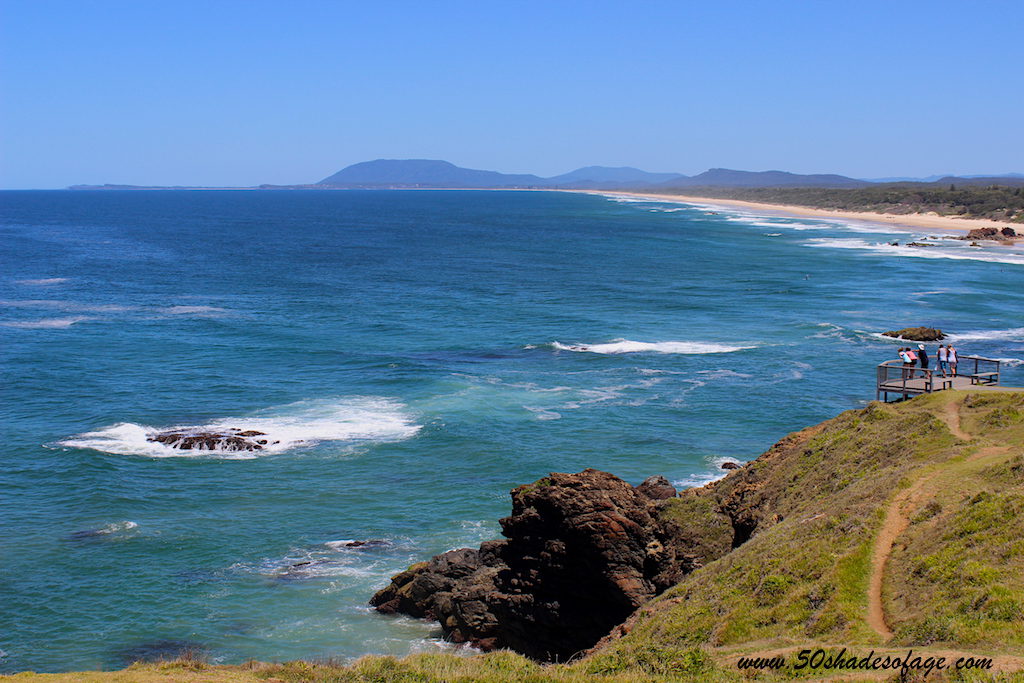 When you get a blue sky day like this one it makes the sea bluer, the grass greener and everything look clearer. The photo was taken from the Tacking Point Lighthouse, Australia’s third oldest lighthouse, at Port Macquarie. The lookout gives unobstructed panoramic views over the rocky outcrop of Tacking Point and Lighthouse Beach to the south that stretches for 7 kms. The city of Port Macquarie is located on the Mid North Coast of New South Wales, about 390 km north of Sydney and is a popular coastal holiday spot. 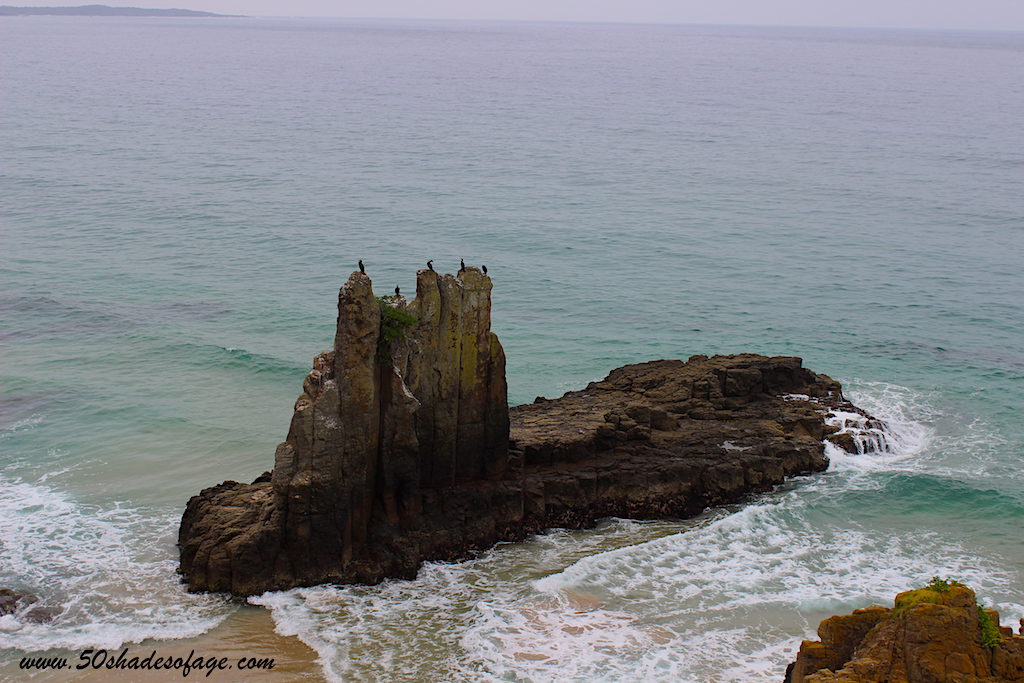 For obvious reasons this rock is called Cathedral Rock and is perched just off the beach at the southern end of Jones Beach, 3 kms north of Kiama in NSW. We came across this monolith and many other mysterious rock formations on the Kiama Coastal Walk, which is an 11 km walk commencing at Werri Beach to the north of Kiama and finishing at Kiama Blowhole Point. This is absolutely the best way to experience the coastal magnificence of the Kiama area, a township 120 kilometres south of Sydney in the Illawarra region. 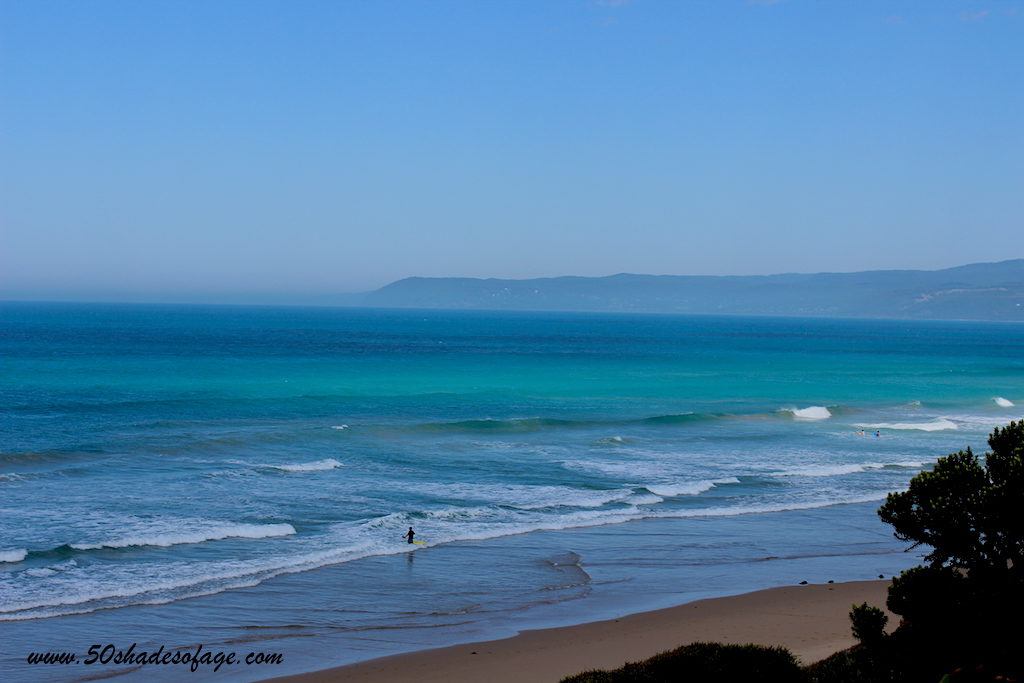 Can you believe the palette of blues and aquas in the colour of the water and the sky in this photo taken at Fairhaven Beach? The sea almost blends with the sky in the distance and the headland of Cape Otway also takes on a blue hue. We came across this quiet stretch of beach on the Great Ocean Road situated between Aireys Inlet and Lorne. Fairhaven is a popular surfing and swimming beach and the small village is frequented by holidaymakers during the warmer months. 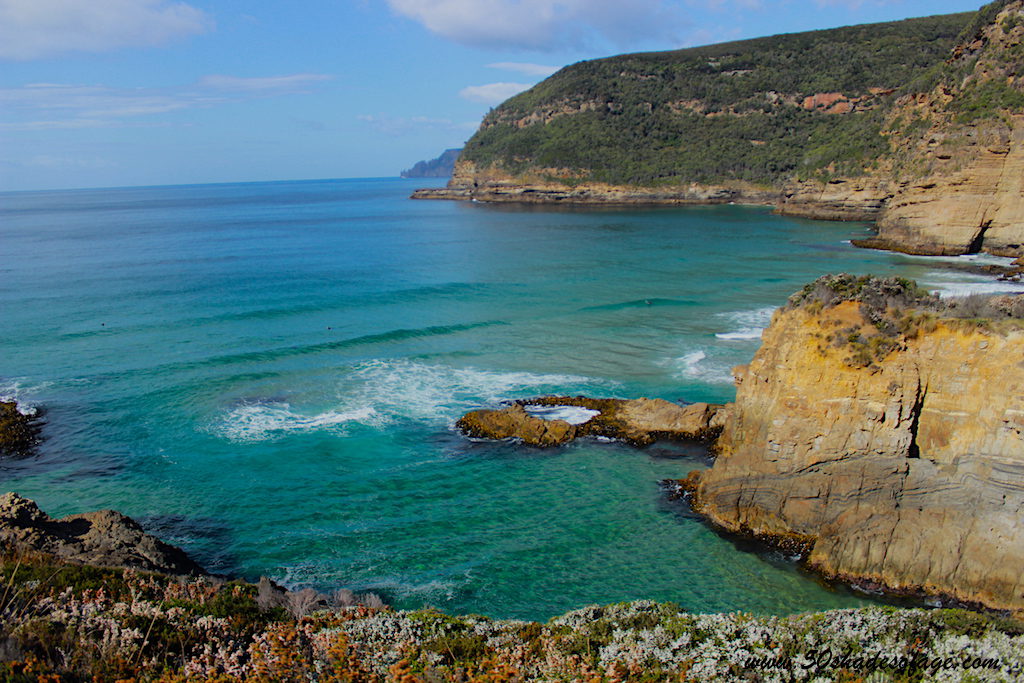 Remarkable Cave on the Tasman Peninsula

There were many “wow” moments in Tasmania as we travelled around this island state and although I thought Freycinet National Park and the Bay of Fires were absolutely breathtaking, strangely I chose this as my favourite photo. It’s about the colours: the turquoise crystal clear sea, the ochre coloured cliffs and the oranges and greens of the coastal vegetation. This remarkable cave is accessible by walking down a number of stairs into the cave where you get a framed view of the ocean. Remarkable Rocks is on the bottom of the Tasman Peninsula in Tasmania. 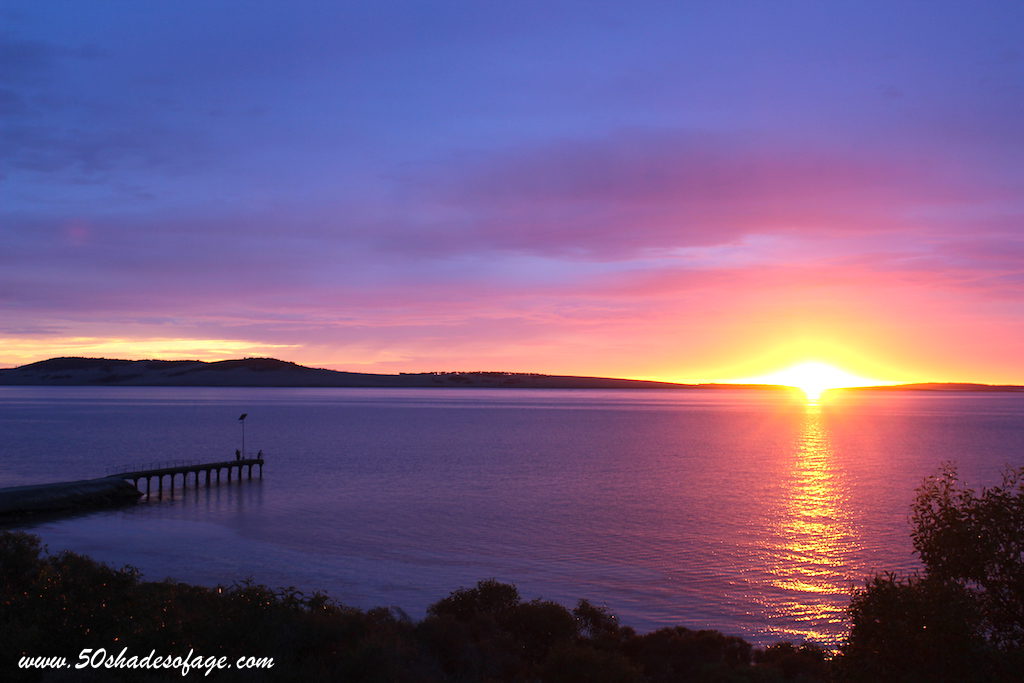 A gorgeous vibrant sunrise over Boston Bay in Port Lincoln

I must have had a sixth sense about this stunningly beautiful sunrise, because I awoke at dawn one morning and saw the vibrant colours forming over the bay from the window of our caravan and quickly jumped out of bed to capture this incredible scene. We were camped at the Port Lincoln Tourist Park on Boston Bay in Port Lincoln on the magnificent Eyre Peninsula for a week of seafood indulgence. The “Seafood Capital of Australia” is located on the lower East Eyre Peninsula on the Spencer Gulf, 646 kms from Adelaide in South Australia. 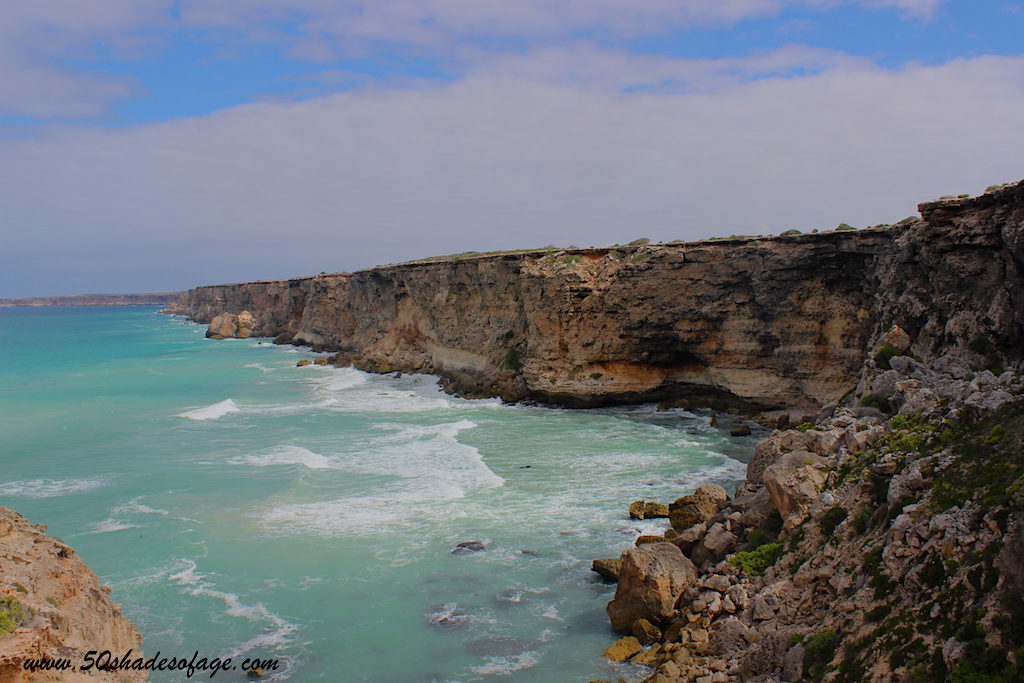 This dramatic display on the edge of the Australian continent are the towering Bunda Cliffs that spread from the western part of South Australia across to the south eastern corner of Western Australia. The cliffs extend for approximately 100km on the drive across the Nullarbor Plain from Border Village to the east of Head of Bight. Over an 85km stretch of the Eyre Highway, there are signed, gravel access roads leading to each of the five main lookouts. This is one of the many reasons why a drive across the Nullarbor Plain is a must do! 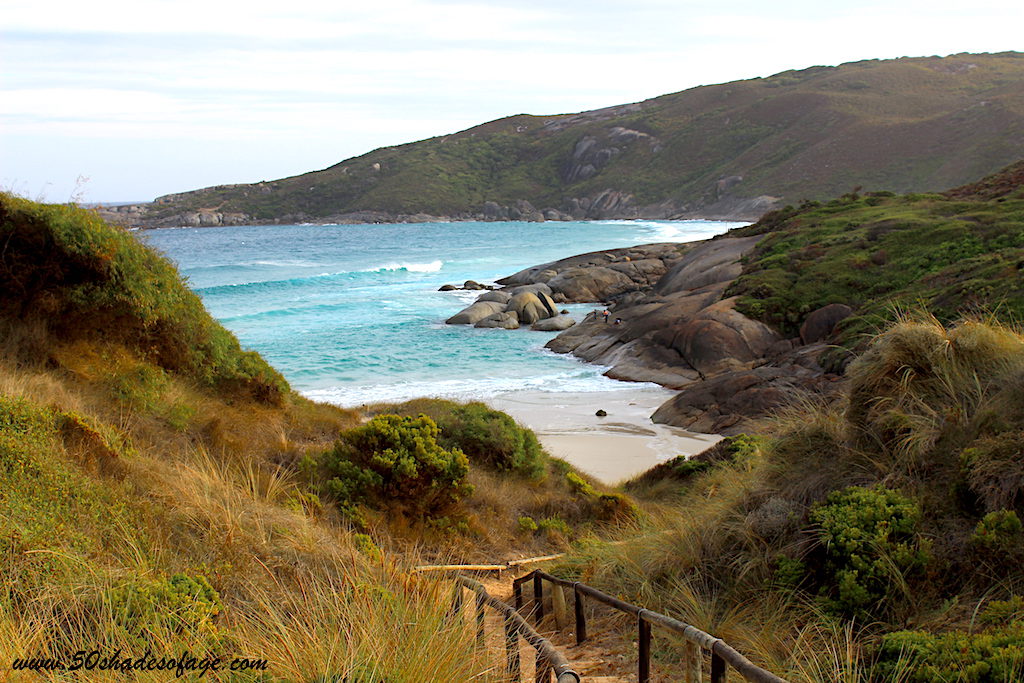 We spent around 5 days free camped at a beach called Cosy Corner, that lies just north of West Cape Howe National Park, 30 kms west of Albany. My husband was cycling on the Bibbulmun Track which is one of the world’s long distance walking tracks, going from Albany to Perth, Western Australia and came across this pretty little beach, so we drove back here late one afternoon. I was not disappointed, as I could not get over the yellows and greens of the grass and shrubs that contrasted perfectly with the lichen covered grey granite boulders and the aqua blue waters of the sea in this secluded little bay. 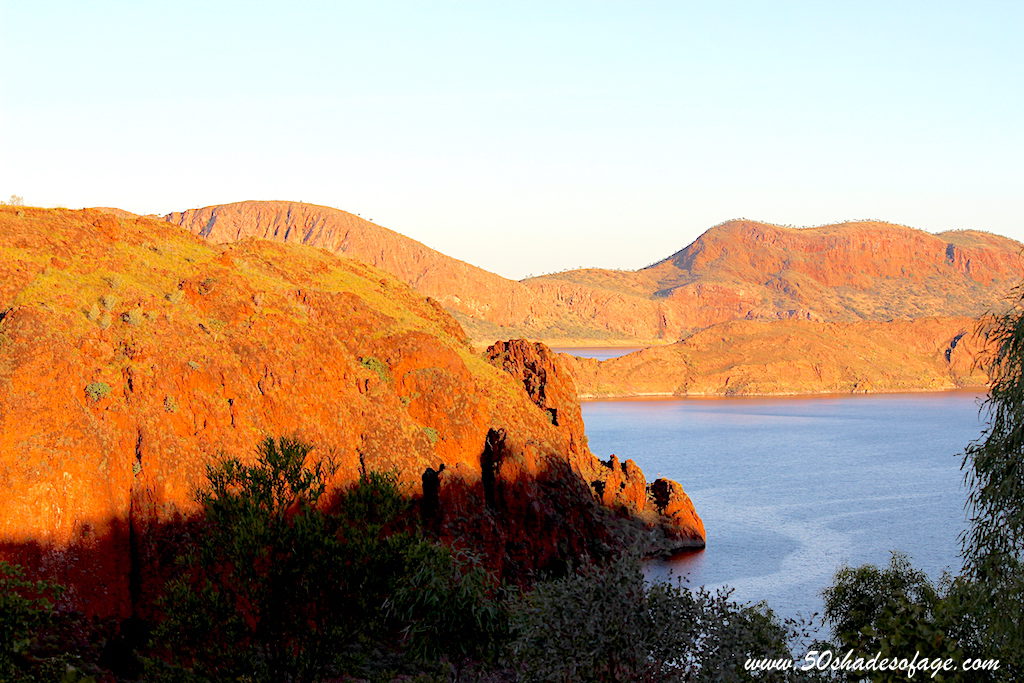 As we travelled north along the extensive Western Australian coastline, we met many fellow caravanners and grey nomads who where a world of knowledge. This is how we found out about Lake Argyle in the East Kimberley, 60 kms east of Kununurra. This manmade lake was formed to dam the Ord River and covers an area 18 times the size of Sydney harbour, 1000 km2. At full flood level that area increases to 2100 km2. There is a large caravan park located on the shores of the massive lake with views like these. As the light changes throughout the day, so does the colours of the rocky escarpments surrounding the lake, from russet browns, to reds, oranges and a rich golden colour. 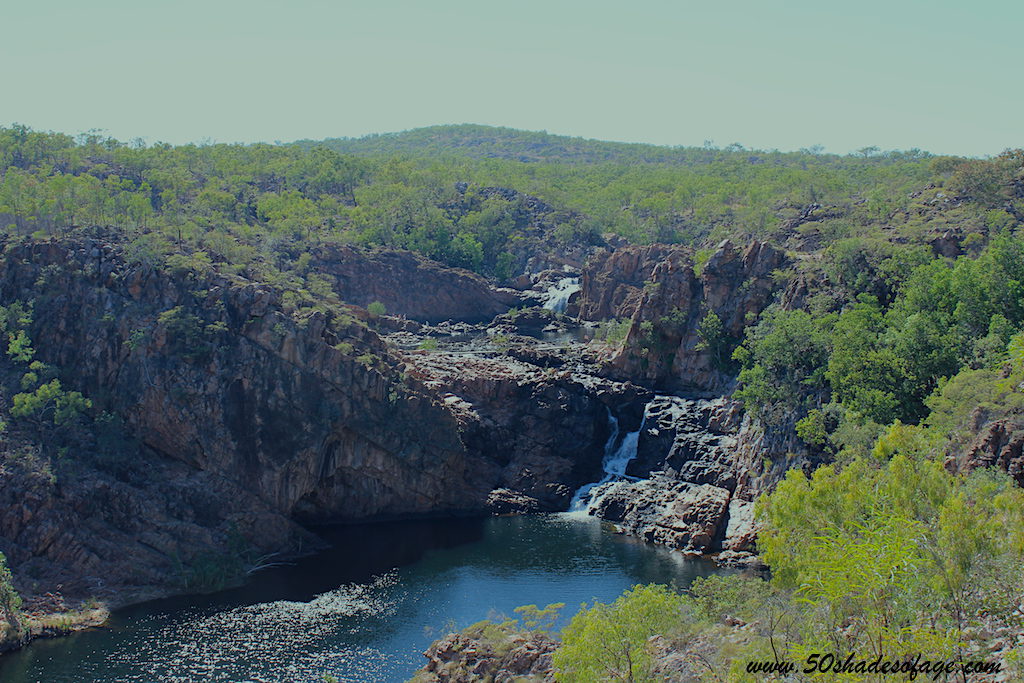 Having previously undertaken a cruise and hike through the Katherine Gorge in Nitmiluk National Park, we decided to head 60 km north of Katherine to Leliyn or Edith Falls. Once you arrive here via a sealed road you can embark on a 2 hour walk around the Leliyn walk (Edith Falls loop walk) where you come across the two waterfalls. You can either swim at the lower or upper falls, but the rock pool at the upper falls is the most popular with visitors, where you swim right under the cascading water. Such a cooling reward after a hot walk! 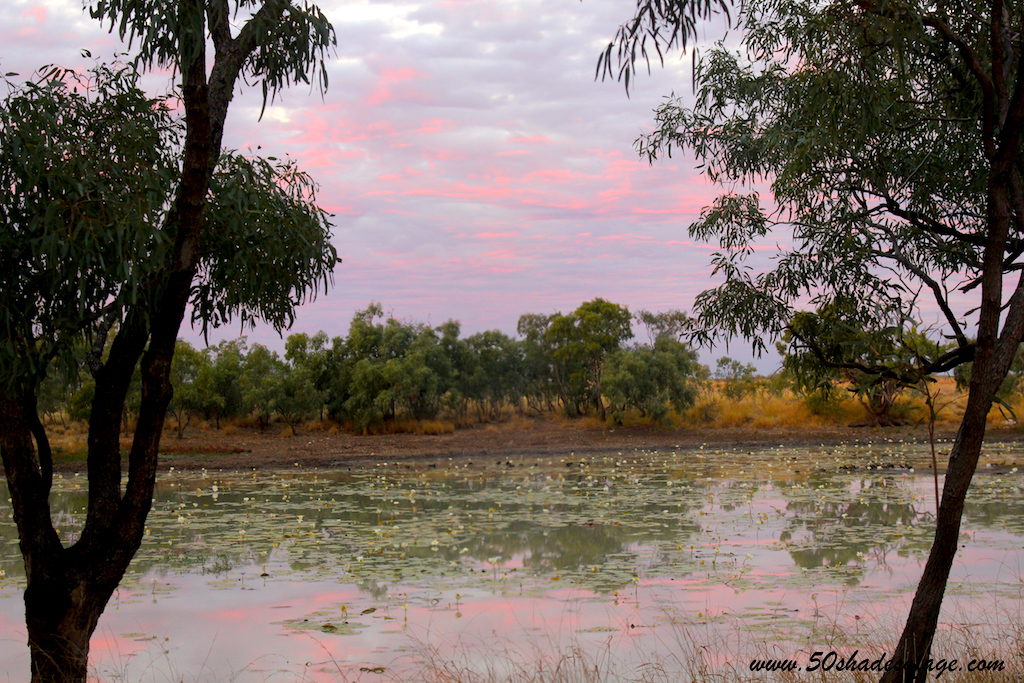 Sunset over Georgina Billabong at Camooweal

I can never resist a pink sunset amongst fluffy grey clouds reflecting on the water. The Georgina Billabong was like an oasis in the desert after we had travelled through arid sunburnt terrain over the border from the Northern Territory into Queensland. Lake Francis on the Georgina River just west of Camooweal is a lily clad billabong with prolific water birdlife swimming on the waters. You can free camp on the western bank of the billabong and setup a campfire, a billy of tea, birdwatch and maybe watch out for a “jolly swagman camped by the billabong” and capture this stunning sunset. 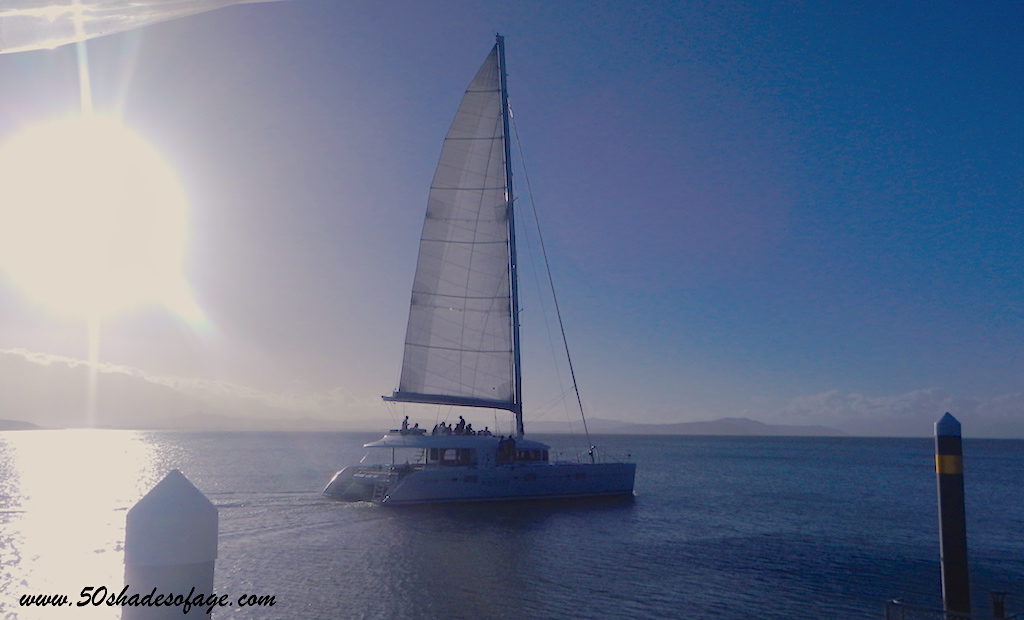 I can’t think of a better place to sit with a cool drink in hand and watch the yachts sail into the marina at Port Douglas, than the deck at the Port Douglas Yacht Club.  This photo was taken just as the sun was dipping in the sky and about to disappear beyond the hills behind Port Douglas, a yachtsmen’s paradise in Far North Queensland. Most visitors jump aboard a day cruise, either on a catamaran or power boat for a day out on the reef, exploring the Great Barrier Reef from above and below the water. 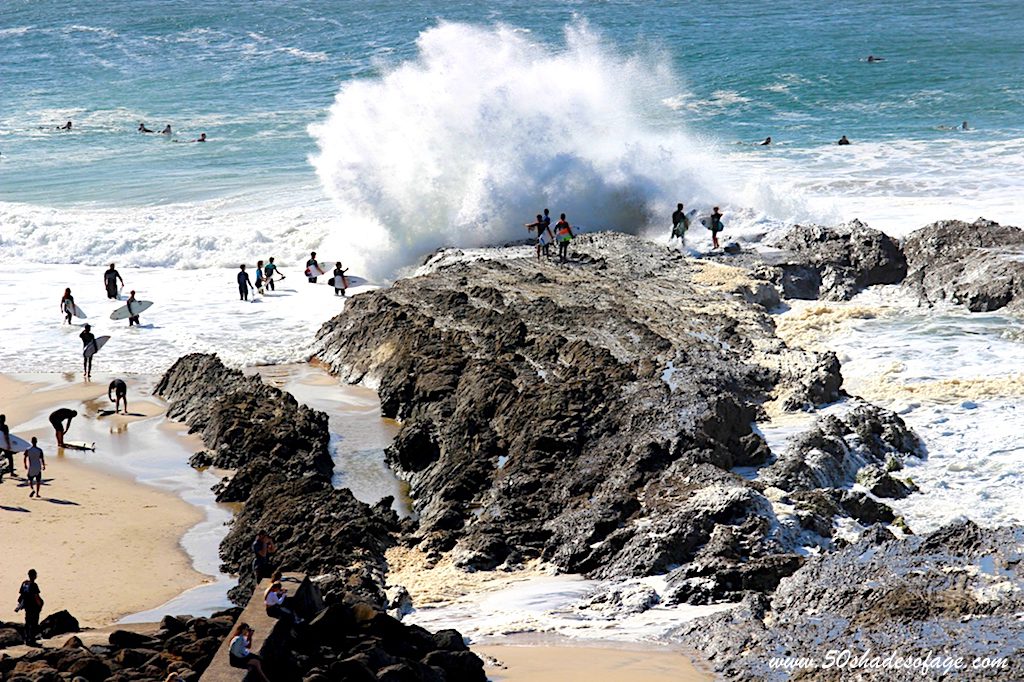 When the cyclone season hits the Queensland coast, the surf can be thundering, particularly here at “Surfing Central” at Snapper Rocks in Coolangatta, the home to the Quicksilver Pro, Round 1 on the World Series of Surfing. This photo shows the surfers, like ants on a rock, waiting for a lapse in the breaking waves so that they can launch themselves into the frothy white water to paddle out to catch a perfect wave. Snapper Rocks is located at Coolangatta on the southern end of the Gold Coast near the Queensland/NSW border.

Australia is an incredible country! Now it’s time for you to choose. Which one of the best of the best Australian places featured would you like to see and why?

Spread the love
Australian BeachesAustralian LandscapesBest of AustraliaNew South WalesNorthern TerritoryQueenslandSouth AustraliaTasmaniaTravel AustraliaVictoriaWestern Australia
By 50 Shades, February 21, 2017 Kathy was a 50 something year old when she started up this blog 6 years ago, but has since turned over another decade and is now in her early 60s. She is married with two adult children and lives on the Tweed Coast of New South Wales, Australia. Kathy enjoys living life to the fullest and loves to keep fit and active by maintaining a healthy diet and exercising regularly. Some of her interests include reading, photography, travelling, cooking and blogging! Kathy works part-time as a freelance writer but her real passion is travelling and photographing brilliant destinations both within Australia and overseas and writing about it.