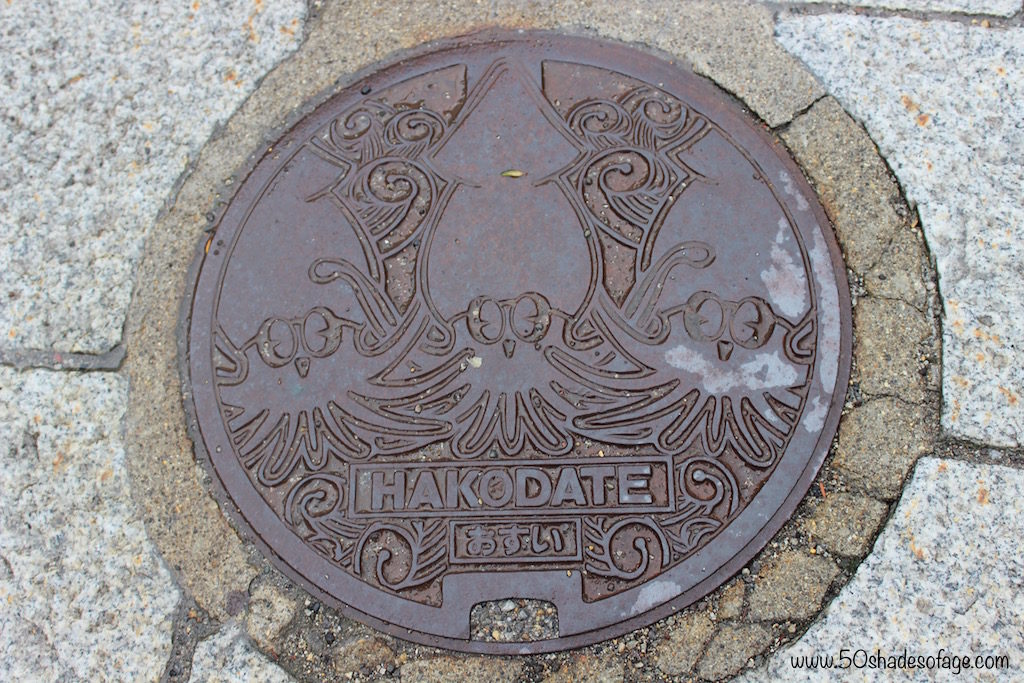 It was with great excitement that we stood on the train platform at Shin-Aomori waiting for the futuristic bullet-shaped, high-speed train or Shinkansen to arrive. We were about to board the bullet train to Hakodate on Hokkaido, Japan. I think it would be on everyone’s “to do list” when visiting Japan to experience a fast ride on one of these modern marvels. 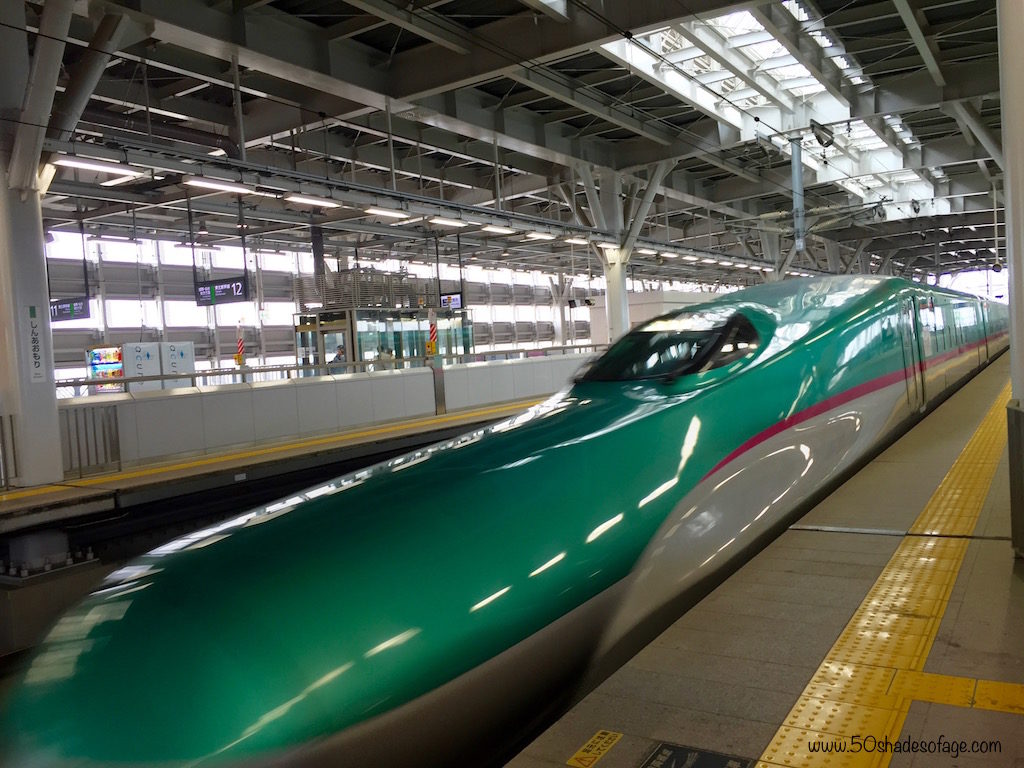 Our hosts and tour guides had informed our small group of four the previous day, that we were to get aboard one of Japan’s bullet trains and travel from Aomori City on Honshu island to the northernmost island of Japan – Hokkaido.

With a maximum operating speed of 320 km/h our Shinkansen sped through the undersea Seikan Tunnel for a distance of almost 54Kms, with a 23.3Km portion being under the seabed. It was an incredible experience on an extremely comfortable, modern and well appointed train service. 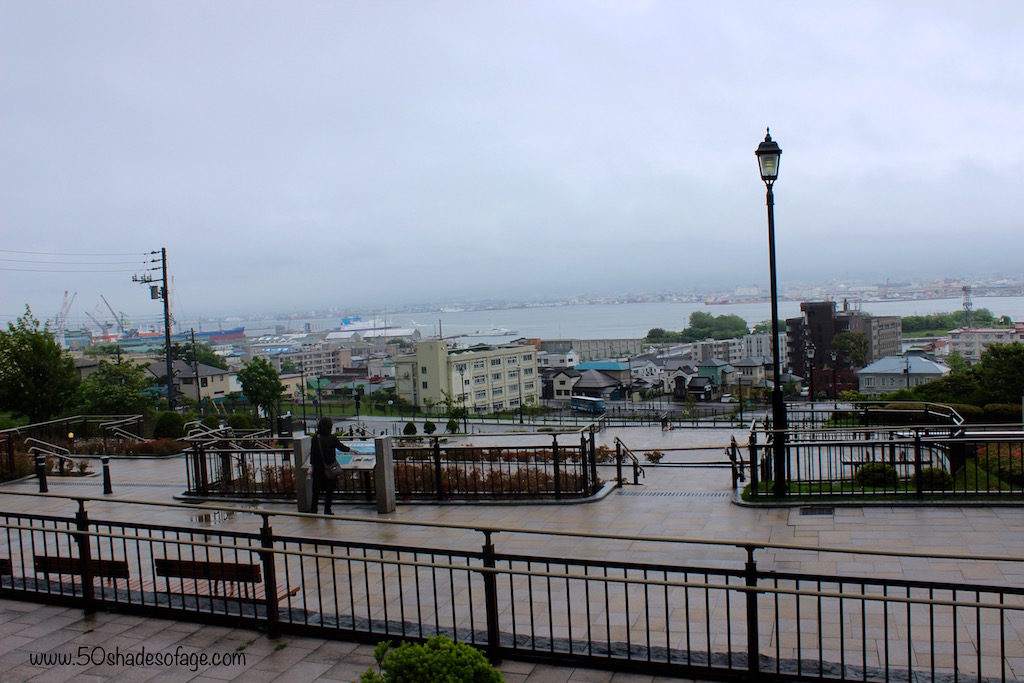 Views over Hakodate City and Port

Hokadate, our destination, is an ancient port and is known as the southern gateway city to Hokkaido Island. Immediately we were hit by the smell of fresh sea air, the sound of seagulls and the sight of a bustling refurbished warehouse precinct around the port. 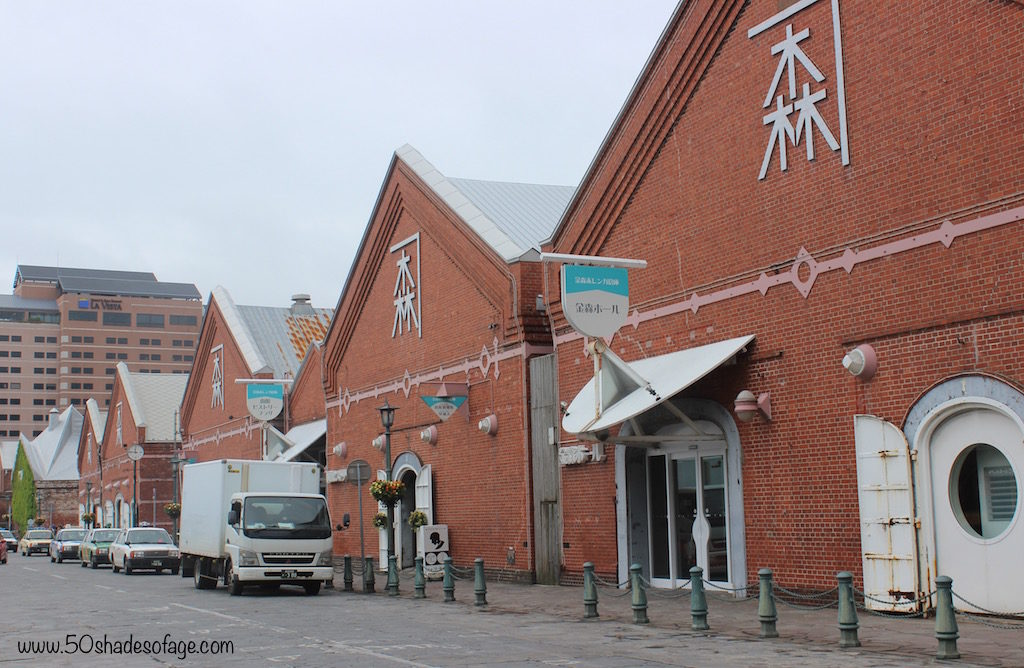 Red-Brick Warehouses in the Port Area

Our accommodation was located between Hakodate and Nanae in the Onuma Quasi National Park at the Prince Hotel Hakodate-Onuma, which was about 15 minutes drive from the Shin Hakodate Hokuto Station. This hotel featured some of the most gorgeous views from their very comfortable rooms and the main restaurant. 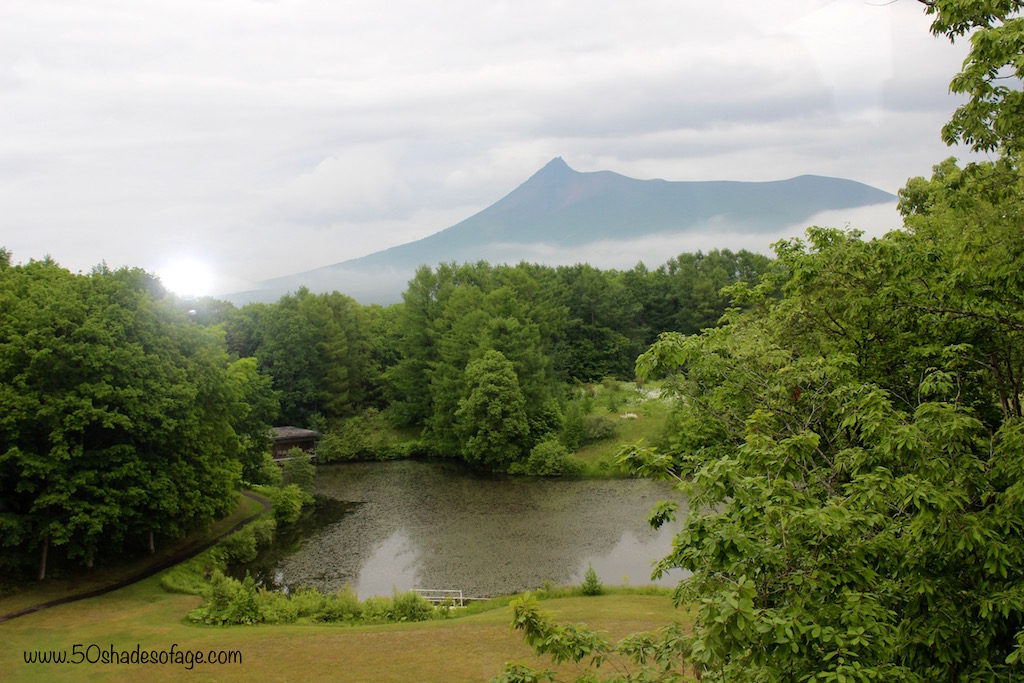 Views from the Restaurant at the Prince Hotel Hakodate-Onuma

The beauty of this region during the summertime is breathtaking. Everywhere you look are mountains and within the Onuma Park there are three scenic lakes; Onuma which is the largest, Konuma and Junsainuma. 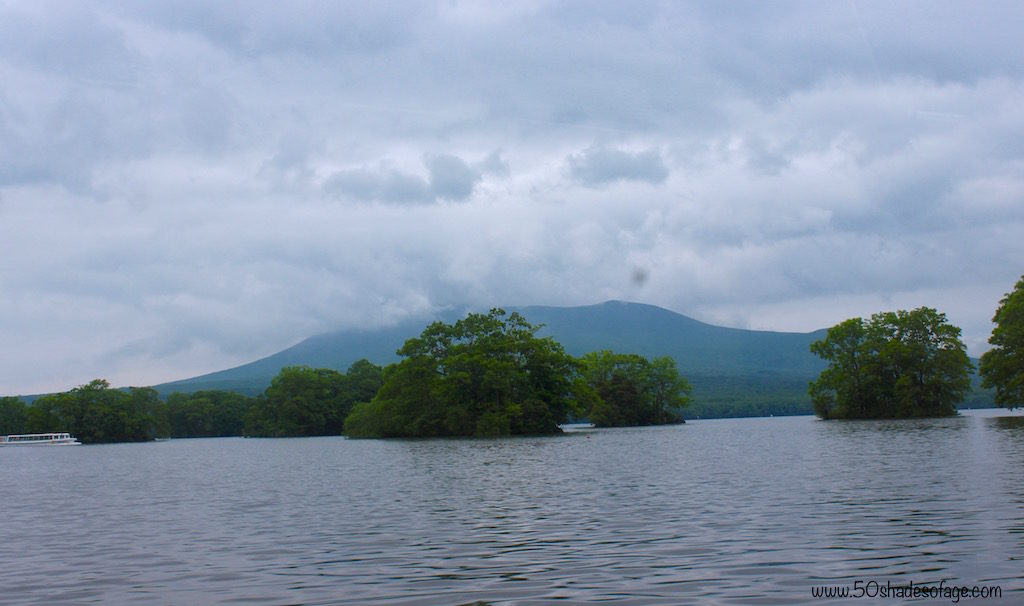 Onuma Lake with Mt Komagatake in the background

The broad expanse of Onuma Lake is dotted with small islands and as we were soon to find out, was great fun to dart around the lake and little islands in a retro-style speedboat. The distinctive silhouette of Mt Komagatake looms over the lake and makes for a picture-postcard photo shot. 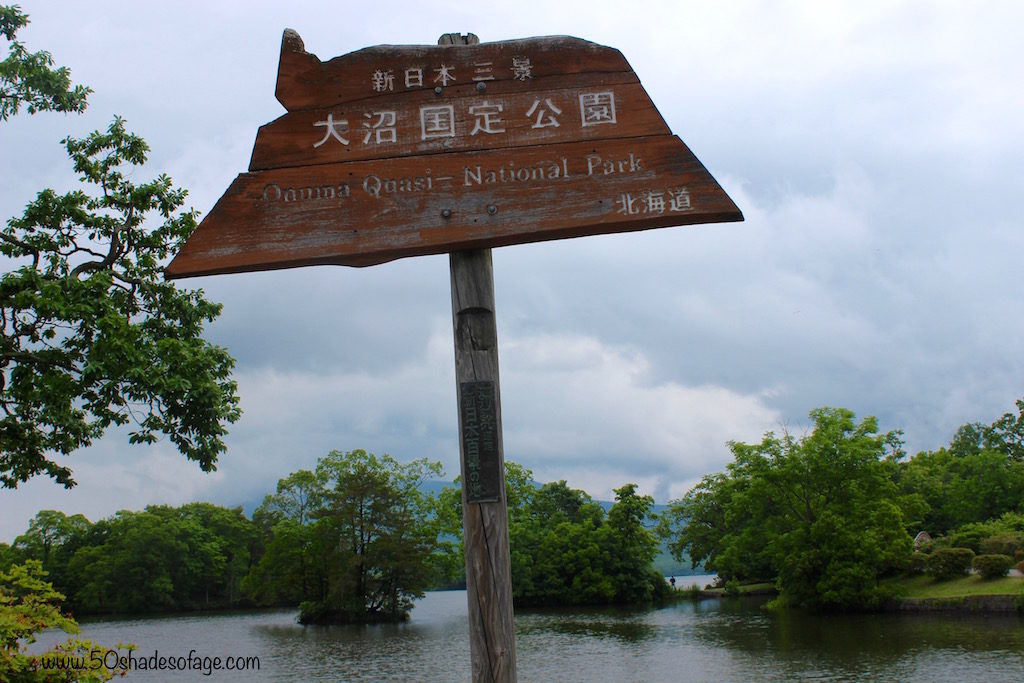 Onuma Lake of a thousand islands

With the change of season from the harsh cold winter, the lakes transform into a water activity playground with fishing, canoeing or kayaking and boating all very popular with tourists. The region is also renowned for mountain climbing and hiking, cycling and golf. 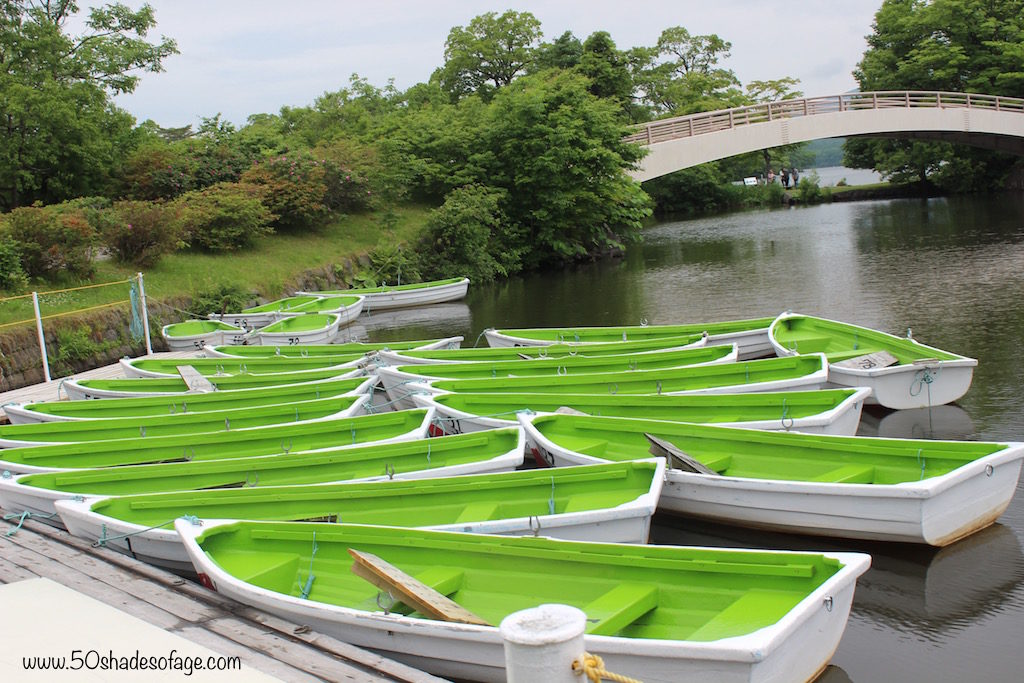 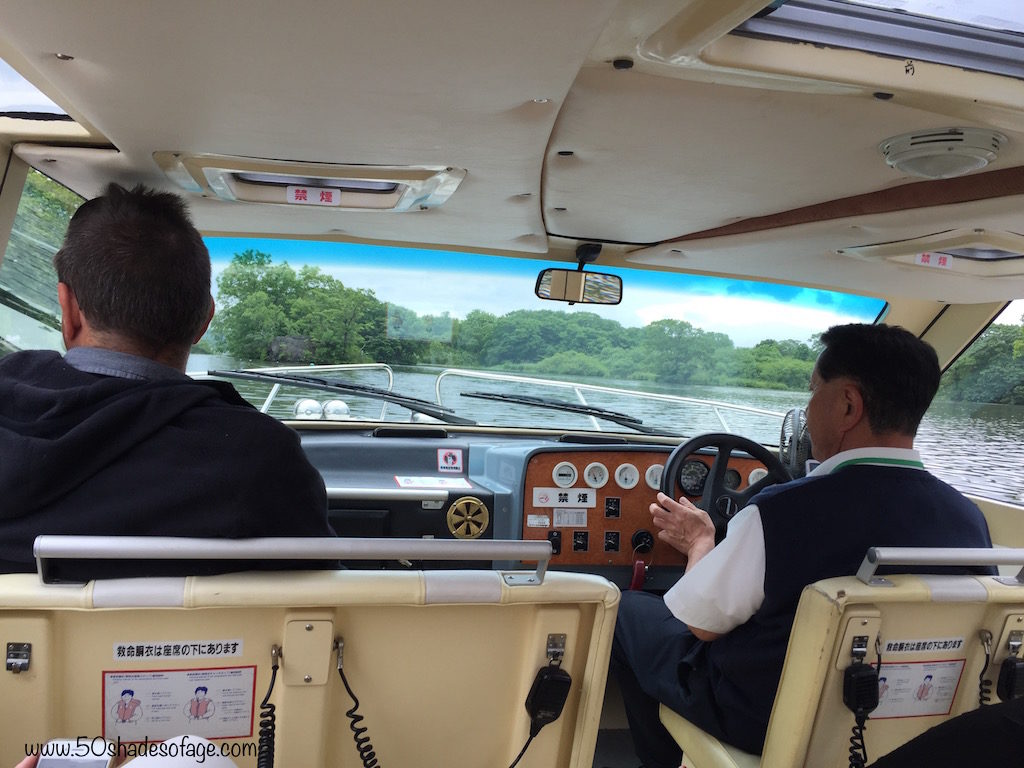 The Prince Hotel Hakodate-Onuma boasts an 18 hole golf course on a rolling landscape and currently a new clubhouse is under construction, due to open in spring 2017. 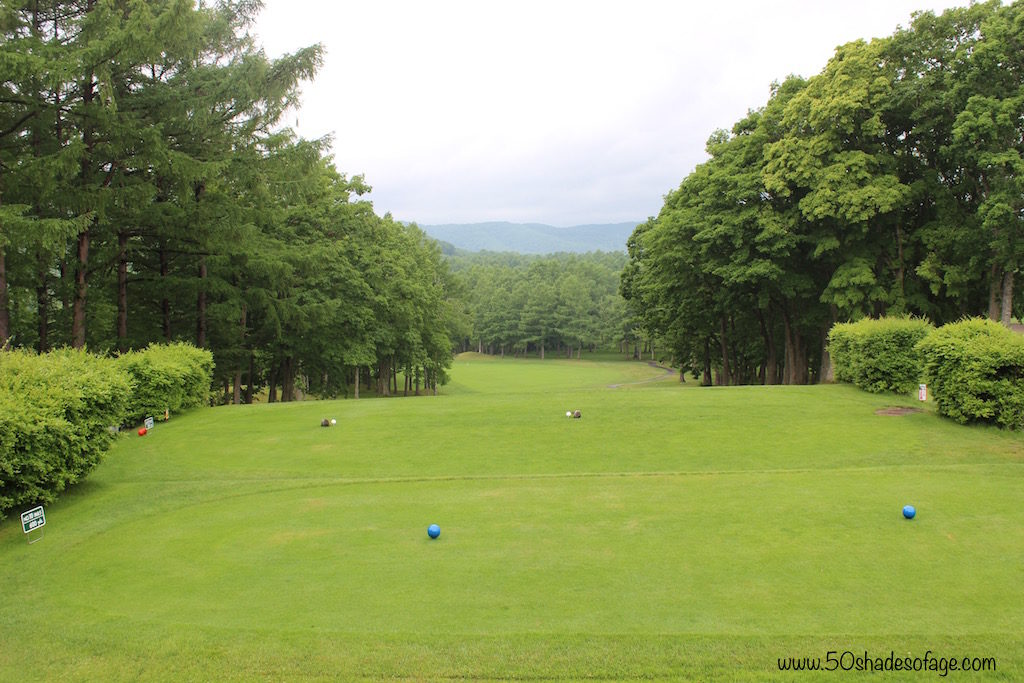 A stroll around Hakodate city is definitely worthwhile. We ventured to Motomachi, a neighbourhood of steep streets with Western-style, early-20th-century buildings. Here we saw the grand, circa-1910 Old Public Hall of Hakodate Ward. 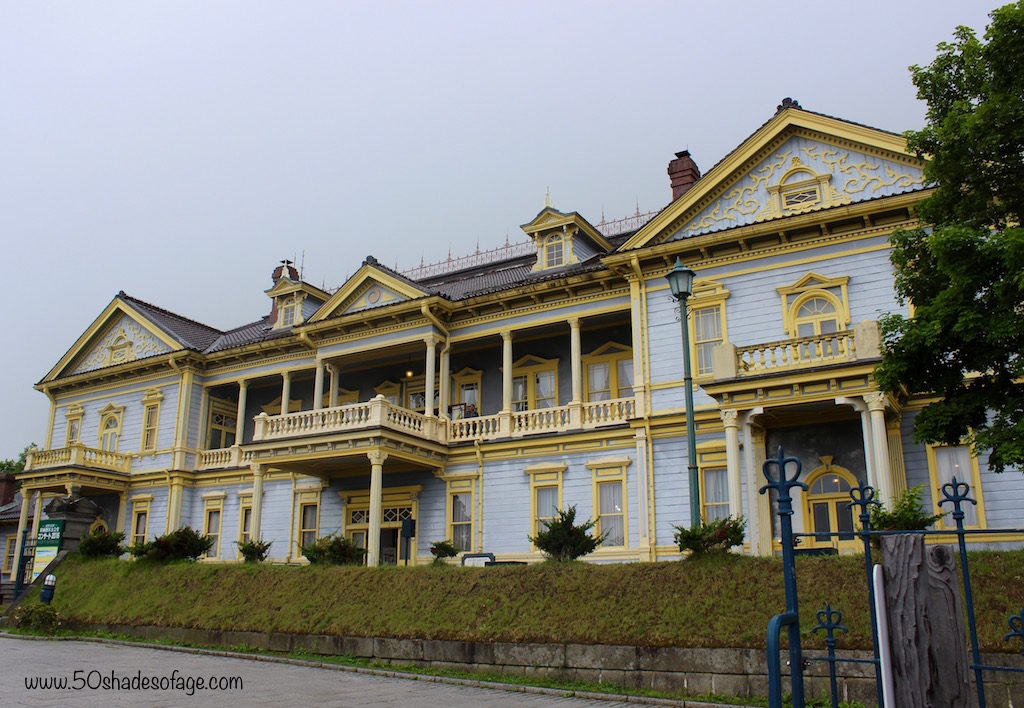 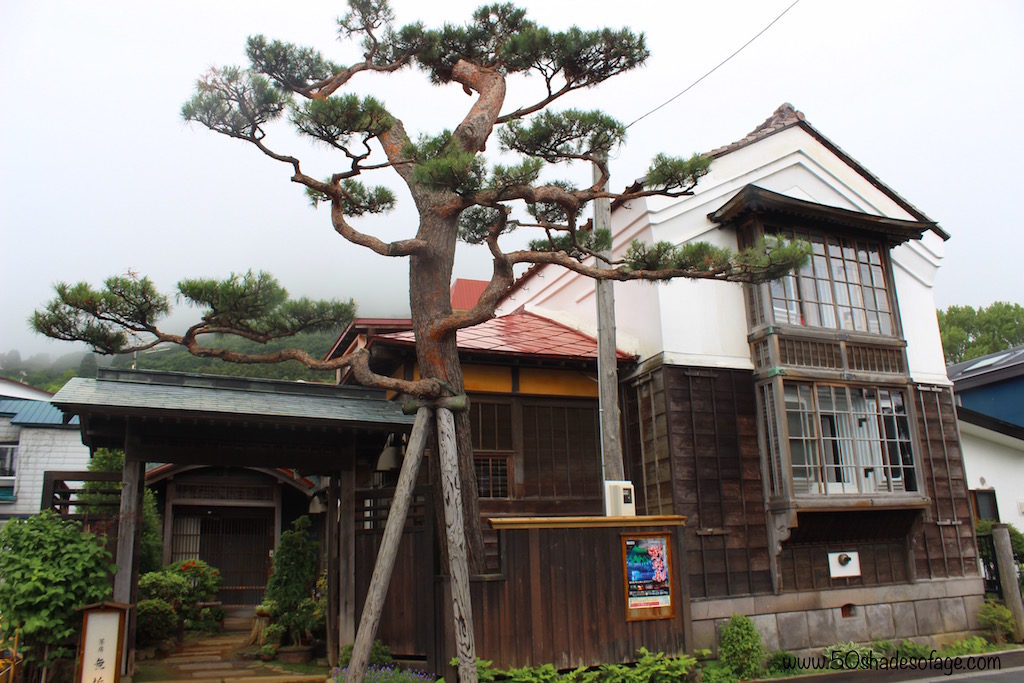 The port area is full of renovated red brick warehouses that have been converted into trendy market-type shops and eateries. Being a seaside city there is also plenty of delicious fresh seafood available, as was evidenced by a stroll around the seafood markets. 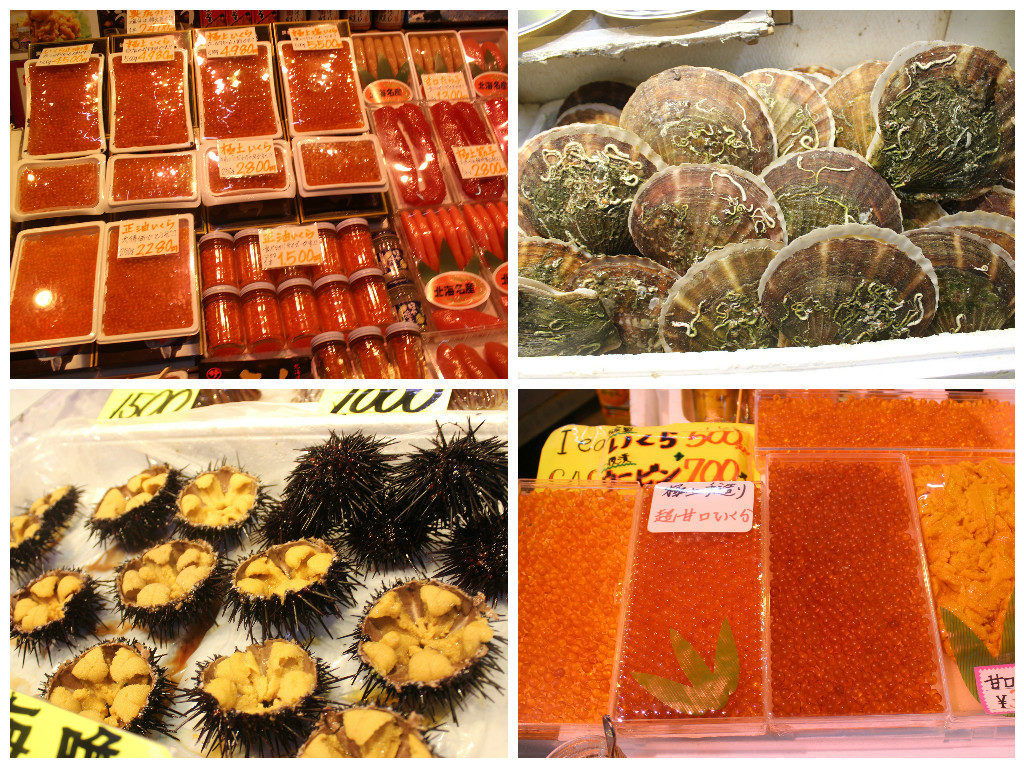 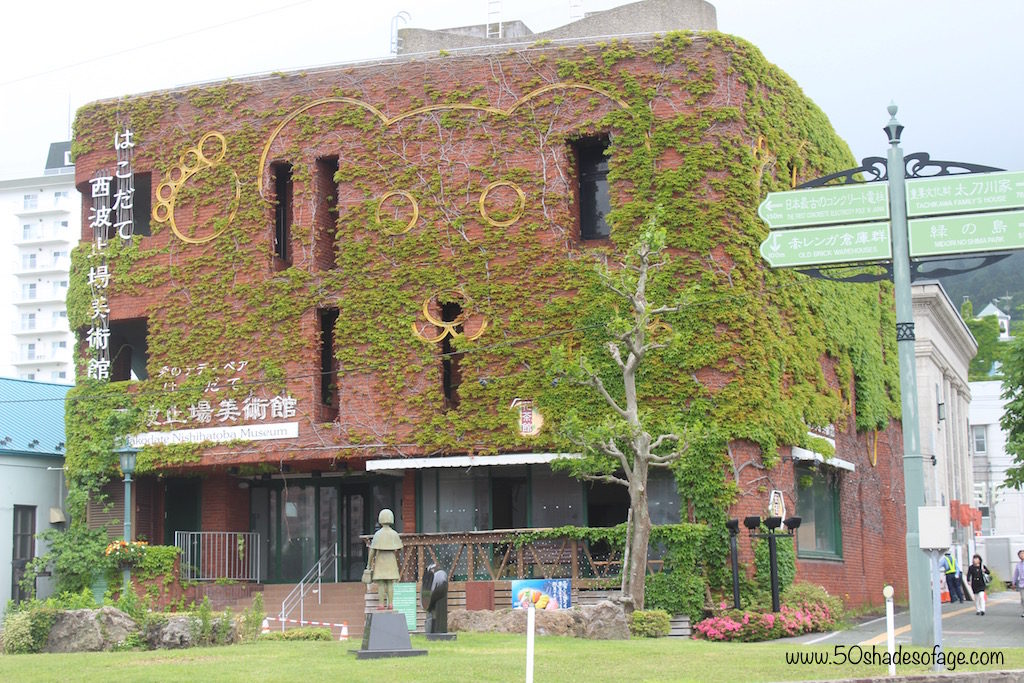 Downtown we also visited the Hakodate City Museum of Northern Peoples where we learnt about history and culture of the Ainu. The indigenous peoples that lived in the harsh conditions of the north developed their own unique cultures, language, dances, clothing, crafts and tools. The Museum exhibits valuable ethnological materials related to Northern Peoples. 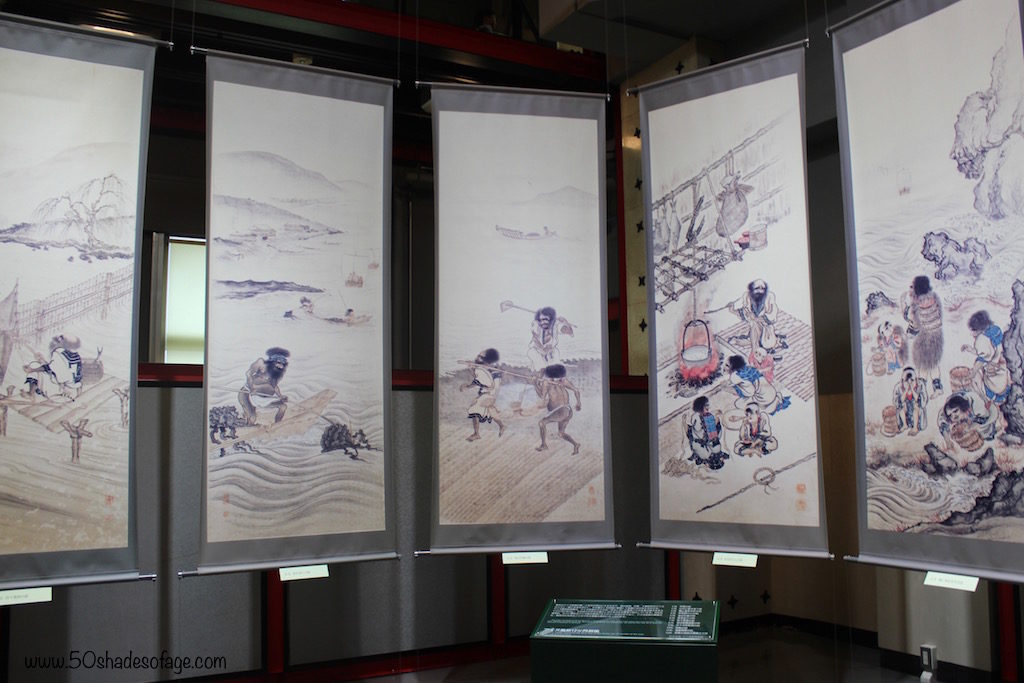 Screen Prints in the Hakodate Museum of Northern Peoples

The city is overshadowed by the presence of 334m-high Mt Hakodate which offers majestic views of Hakodate city and surrounding Nanae district. You can catch a cable car up Mt Hakodate to get a bird’s eye view of the city. 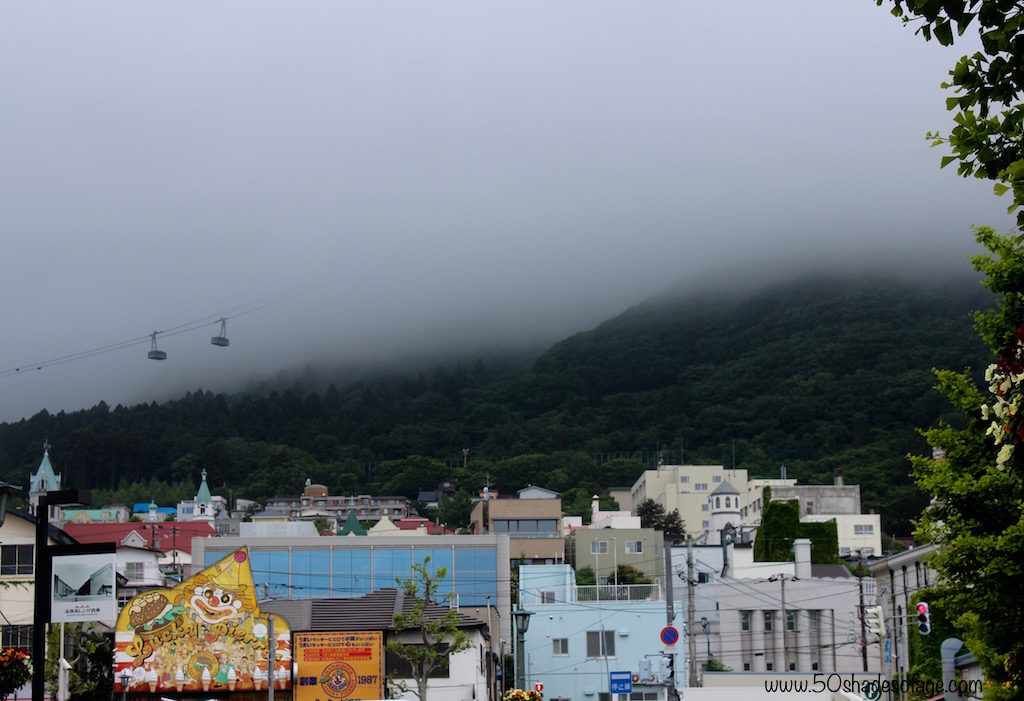 Cable Car up to Mt Hakodate

The mountain’s summit offers a dramatic nightscape which has been honoured as one of Japan’s three great night view sites. On the particular day we were in Hakodate the mountain was engulfed in cloud and it was raining so the cable car was not operating. 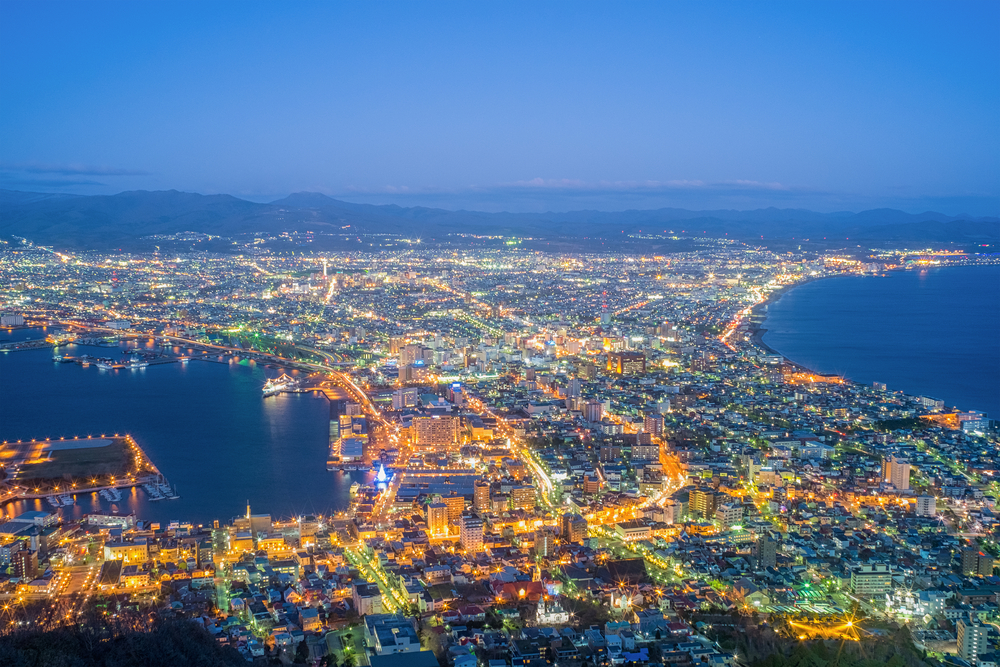 Views from Mt Hakodate over the city at night

A star-shaped fort called Fort Goryokaku, which was the final ground of the Battle of Hokadate can be observed from Goryokaka Tower, which is particularly spectacular in spring when it becomes blanketed in pink cherry blossoms. 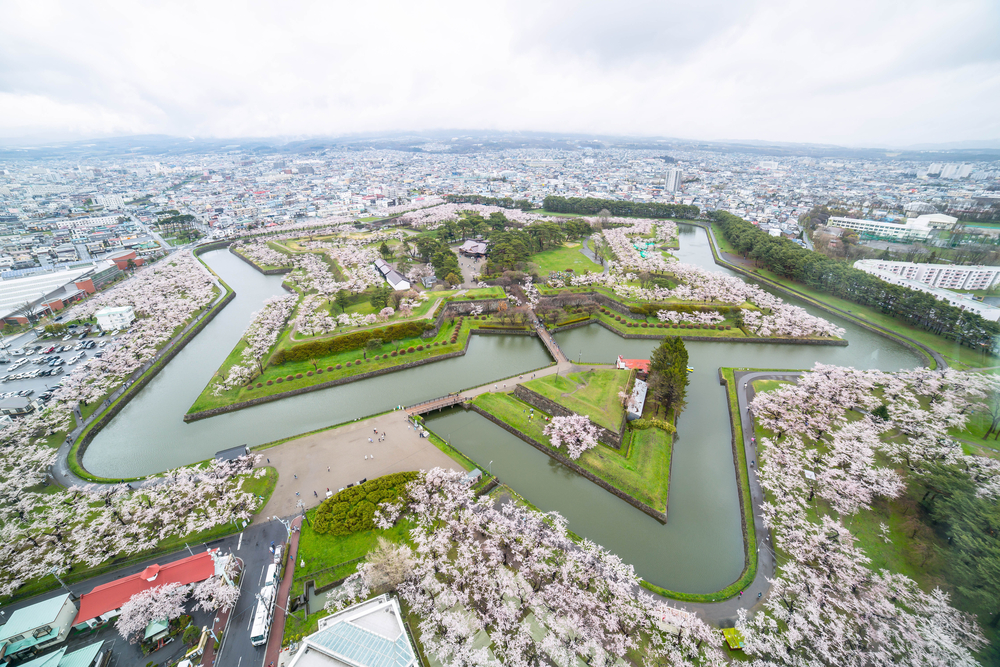 The Yonokawa Hot Spring area has a history dating back 350 year and the Onsen was once a retreat for injured soldiers during the Battle of Hakodate. The Hakodate City Tropical Gardens located in this area is home to some 100 Japanese macaques (or snow monkeys). They can be seen taking a leisurely dip in the hot springs in the colder months. 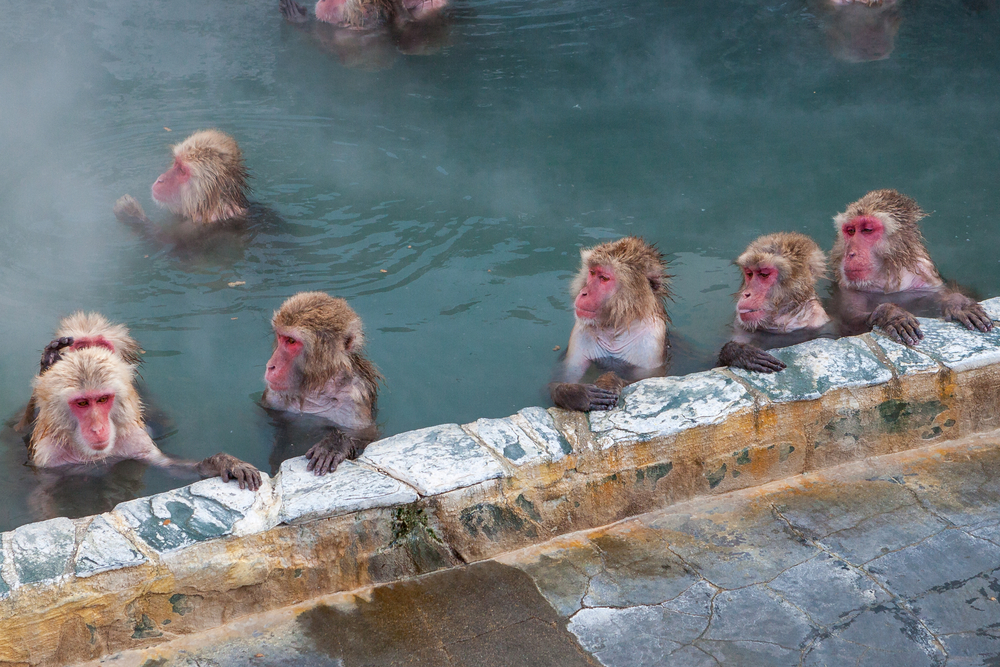 The great thing about Hakodate City from a tourist point of view, is that you can see all the sights by jumping on a tram that runs constantly around Motomachi, the Bay Area, Yunokawa and Goryokaku. 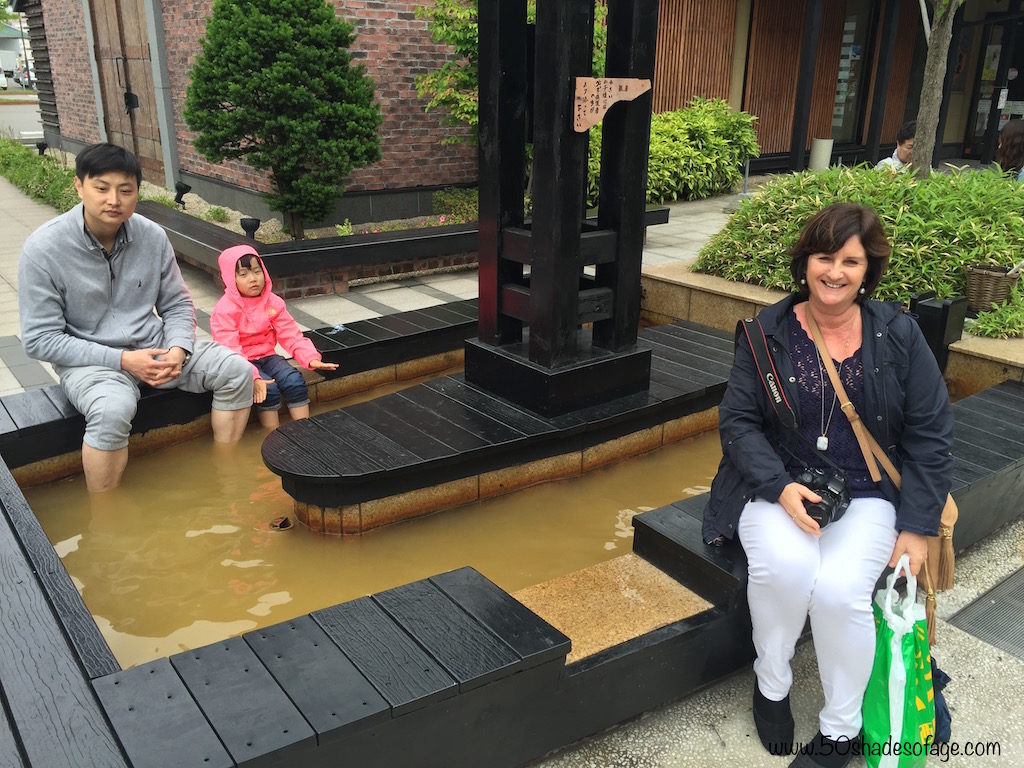 During the winter months the area transforms into a snowpark with Hakodate-Nanae being one of the most popular in the region. This resort is about 50 minutes by car from central Hakodate in Nanae town.

Our summer experience in Hakodate-Onuma was far too short to really appreciate what this beautiful region has to offer. It left me with a great desire to see more of Hokkaido and the northern regions of Japan.

Where is Hakodate? Located on the southern tip of the island of Hokkaido in the Oshima Subprefecture, Northern Japan.

How to Get to Hakodate: You can travel all the way from Tokyo by bullet train or Shinkansen. You can also fly from Tokyo to Hakodate with All Nippon Airways (ANA).

Where we Stayed: Prince Hotel Hakodate-Onuma, which was about 15 minutes drive from the Shin Hakodate Hokuto Station between Hakodate and Nanae in the Onuma Quasi National Park.

Spread the love
HakodateHokkaidoNorthern JapanOnuma
By 50 Shades, July 5, 2016 Kathy was a 50 something year old when she started up this blog 6 years ago, but has since turned over another decade and is now in her early 60s. She is married with two adult children and lives on the Tweed Coast of New South Wales, Australia. Kathy enjoys living life to the fullest and loves to keep fit and active by maintaining a healthy diet and exercising regularly. Some of her interests include reading, photography, travelling, cooking and blogging! Kathy works part-time as a freelance writer but her real passion is travelling and photographing brilliant destinations both within Australia and overseas and writing about it.