Boabs of The Kimberley 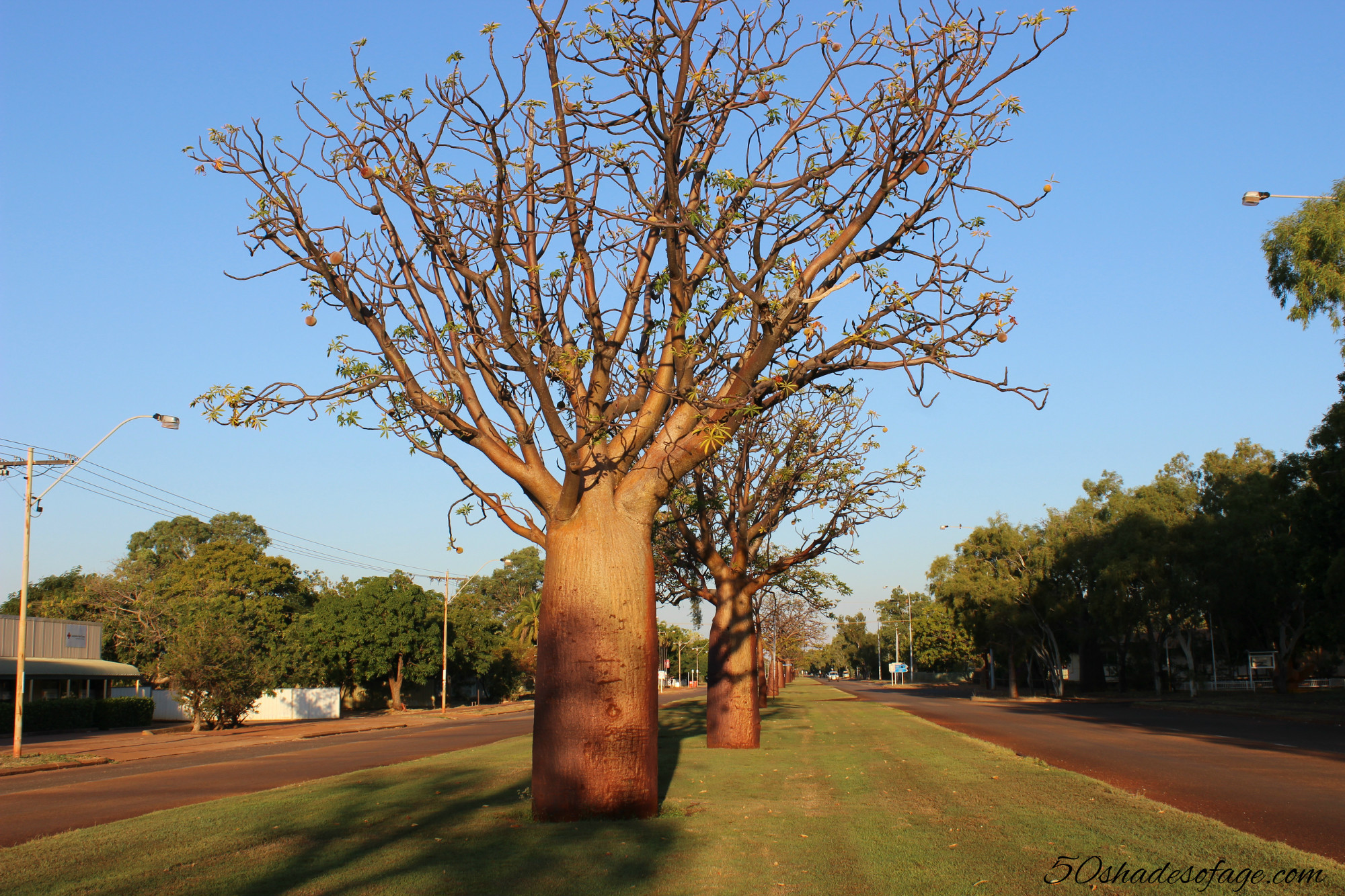 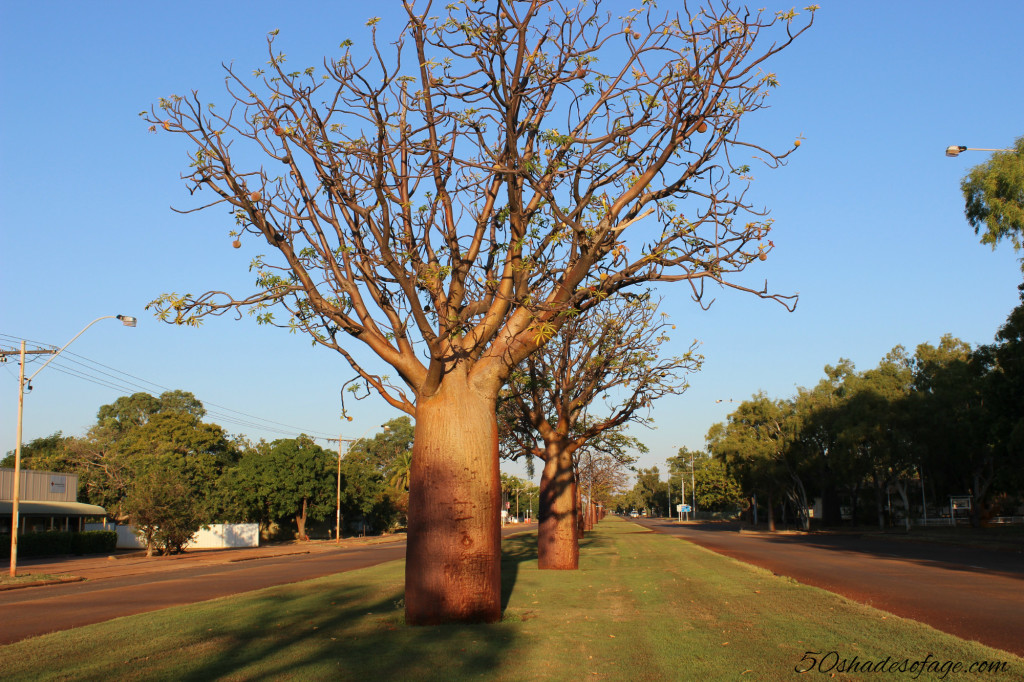 Boabs in the main street of Derby, WA

One of the things I loved about North Western Australia and The Kimberley was the boab trees. For some reason they exemplified The Kimberley region and had this mysterious quality about them.

You see every boab tree is unique. They have character and personality as you would expect of such an ancient creature. Some individual boab trees are 1500 years old and older, which makes them the oldest living beings in Australia, and puts them amongst the oldest in the world. 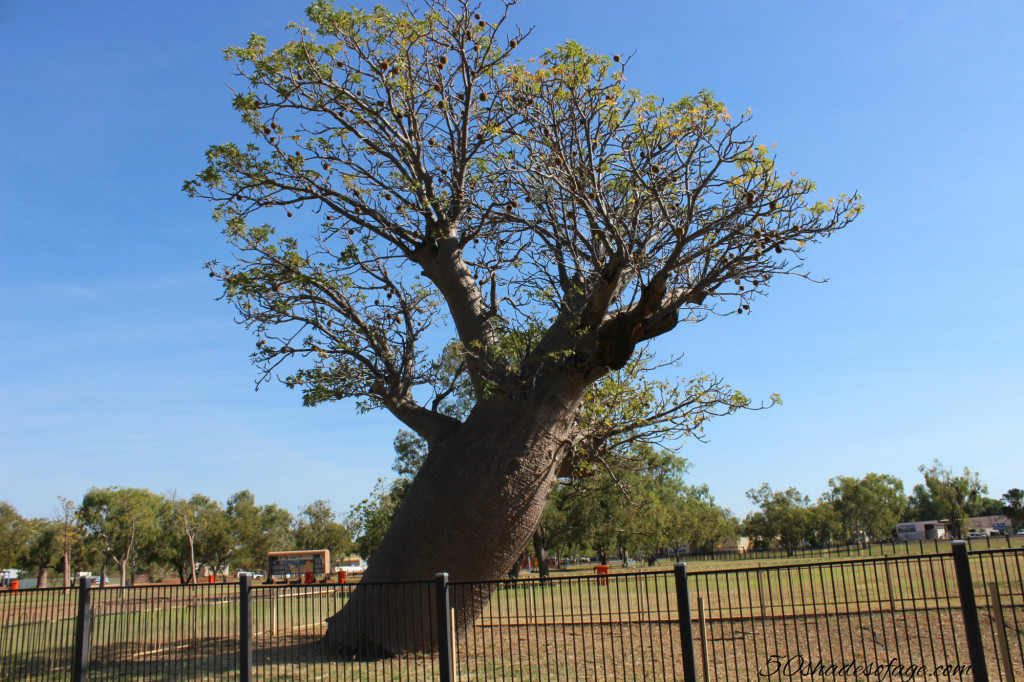 Boab on the lean in Wyndham Park, WA

Aboriginals used the giant boabs as shelter, food and medicine. For the white settlers they served as easily recognisable land marks and meeting points, and not to forget as impromptu prison cells.

The Australian boab tree (Adansonia gregorii) is related to the Madagascan and African Adansonia species known as baobabs. Like its relatives it is sometimes called a “Bottle Tree”, due to their bottle shape, but in Australia we like to call them boabs. 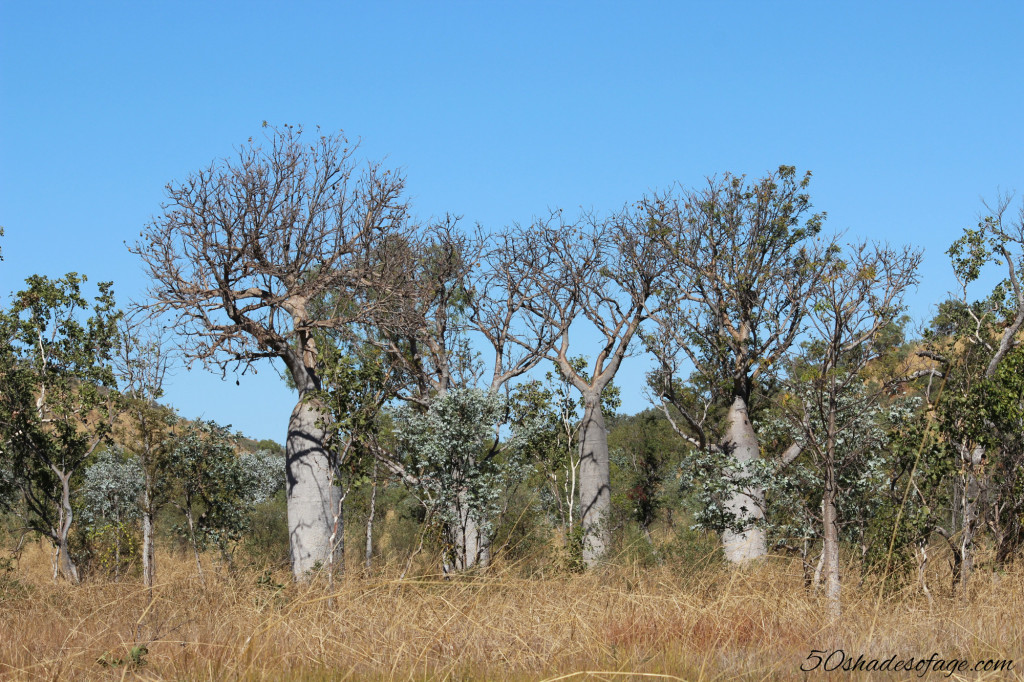 Boabs in the wild in The Kimberley

They are extremely slow growing and it takes hundreds if not thousands of years to grow into an impressive specimen. At most they reach 15 metres high, but their trunks can better that with a circumference of up to 20 metres.

My first sighting of a boab tree was actually in The Pilbara at a ghost town called Cossack near the mining town of Wickham. 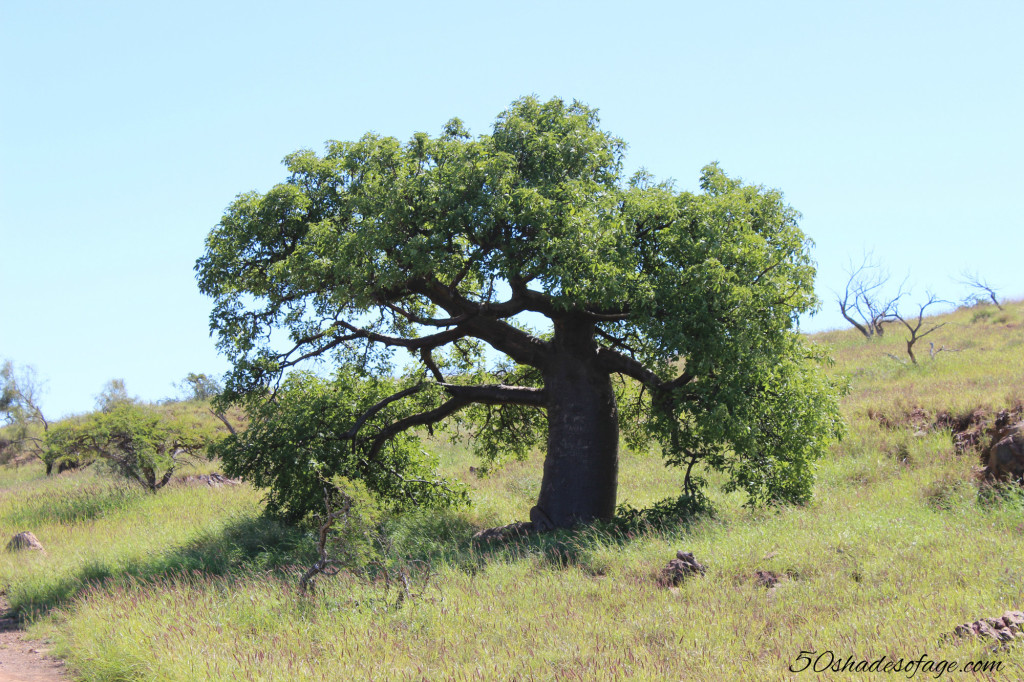 Boab at Cossack, The Pilbara

The coastal, pearling and tourist town in The Kimberley region of Western Australia, Broome has hundreds of boab trees lining its streets and the historic Broome Courthouse has some magnificent specimens. 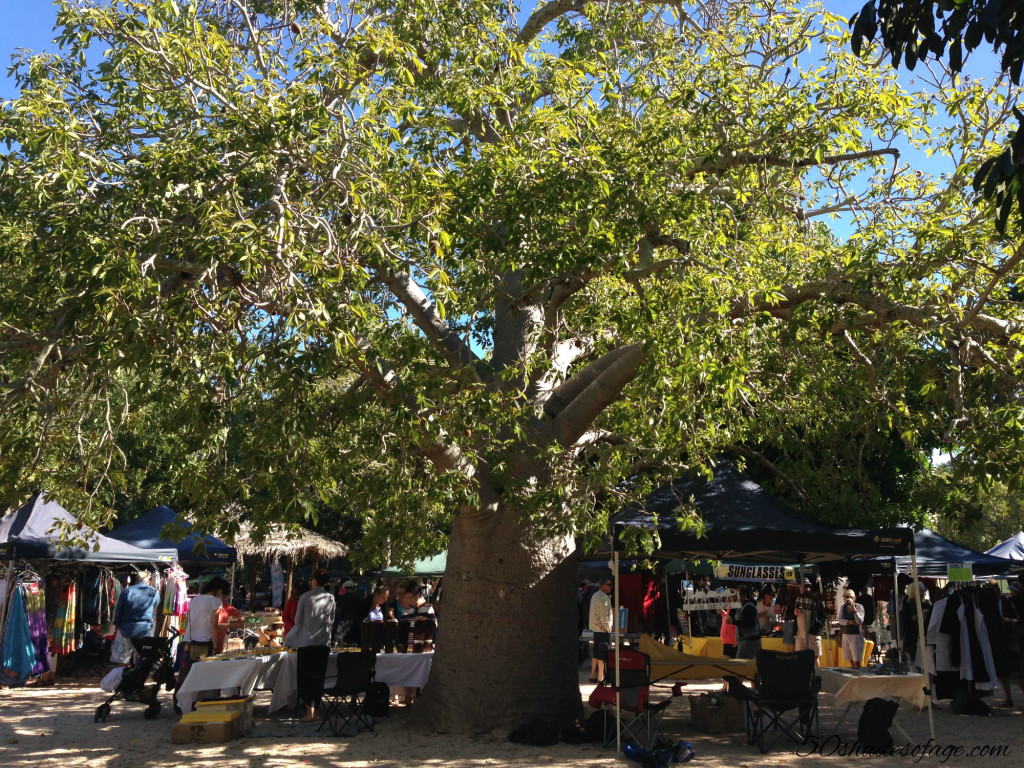 Boab at the Broome Courthouse Markets

The famous Prison Boab near Derby WA has a hollow tree trunk which is over 14 metres in circumference and the opening is a 1 metre wide and 2 metres high. It was used as a “prison cell” in the 1890s by the local police to lock up Aboriginal prisoners overnight, on their way to Derby for sentencing. 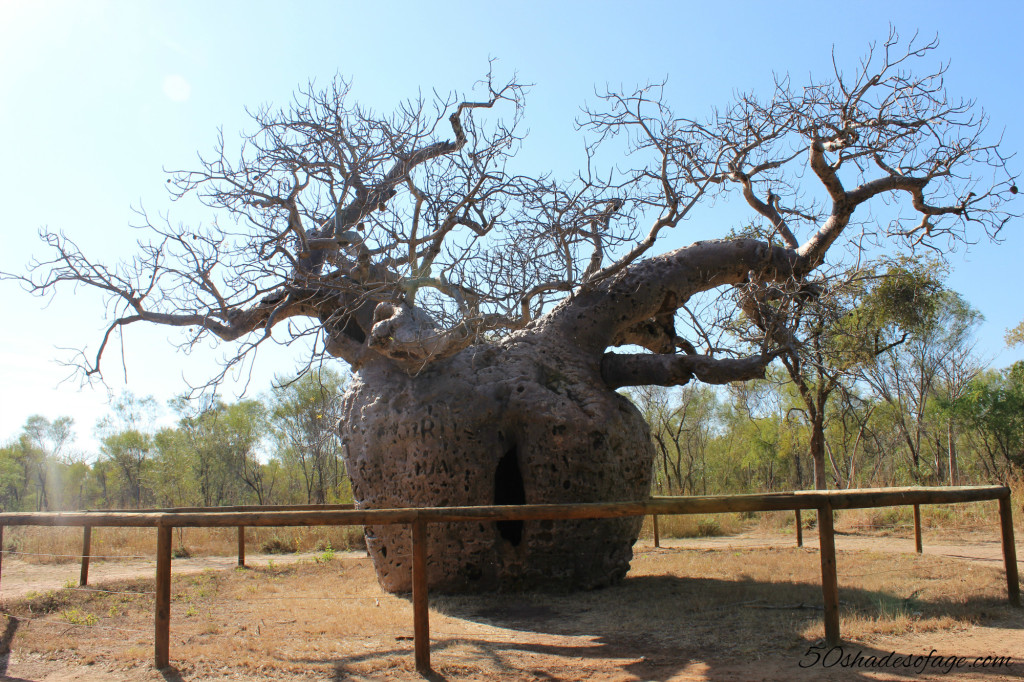 Whilst we were in Derby we watched the local Aborigines use boab tree nuts for carvings and paintings. When the dark surface of the boab nut is scratched away it reveals a light colour underneath so a pattern or image can be etched into the oval shaped nut. 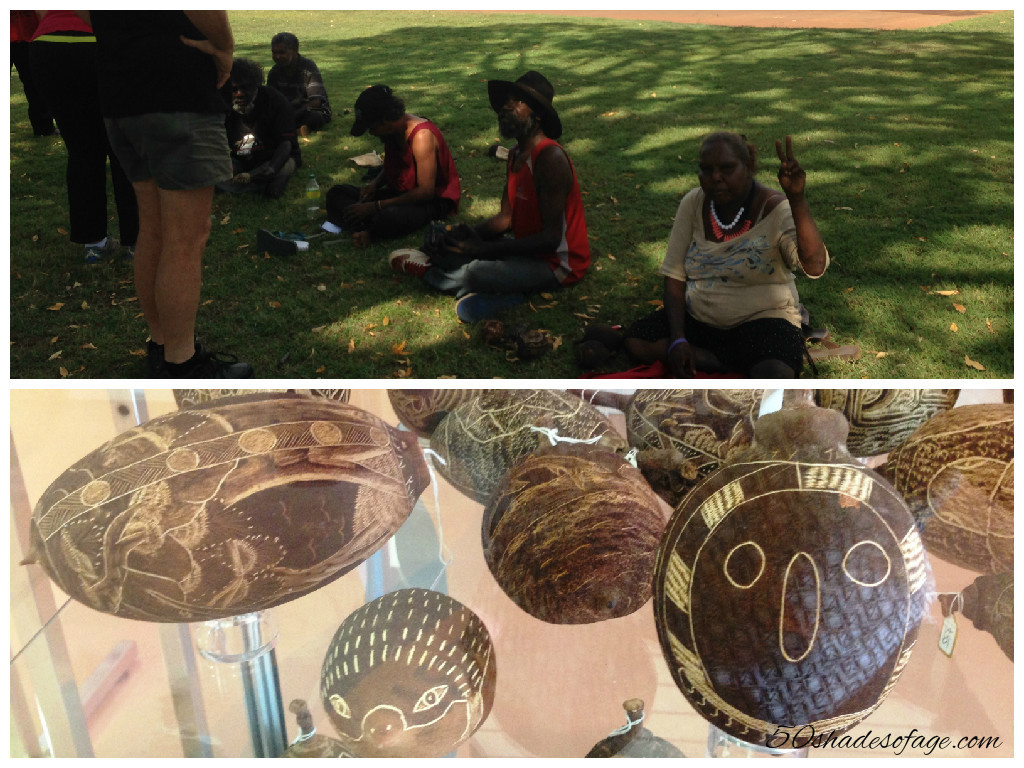 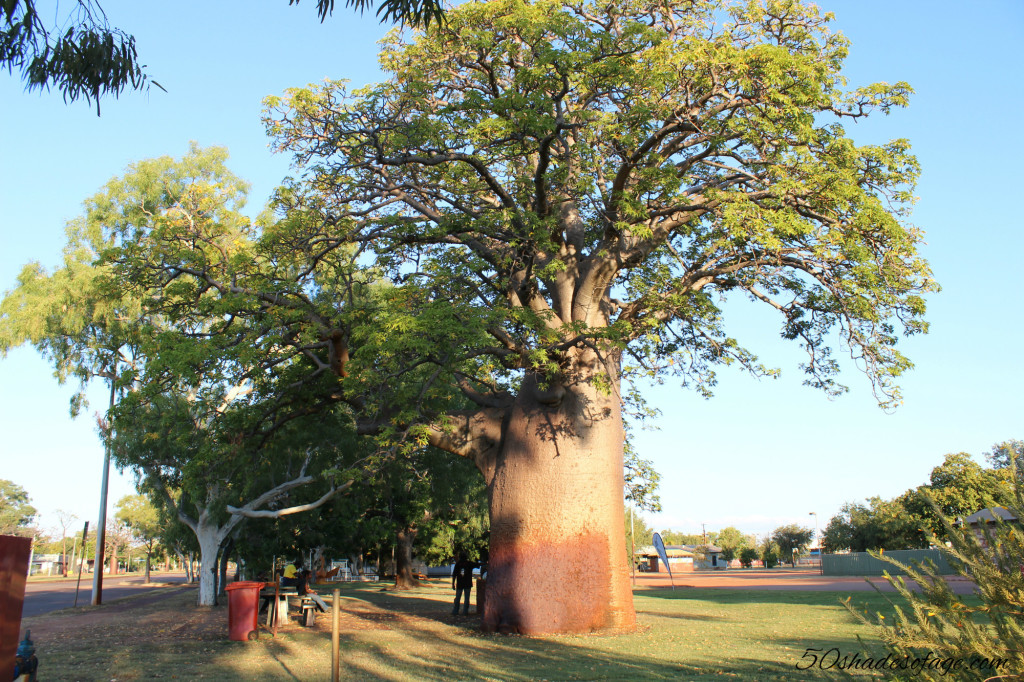 Departing Derby for the long trek across The Kimberley on the Great Northern Highway we saw many fine specimens along the roadside. Including one of the biggest boab trees I saw on my travels at a rest stop along the way. We stopped here and enjoyed morning tea and a chat with fellow-travellers. 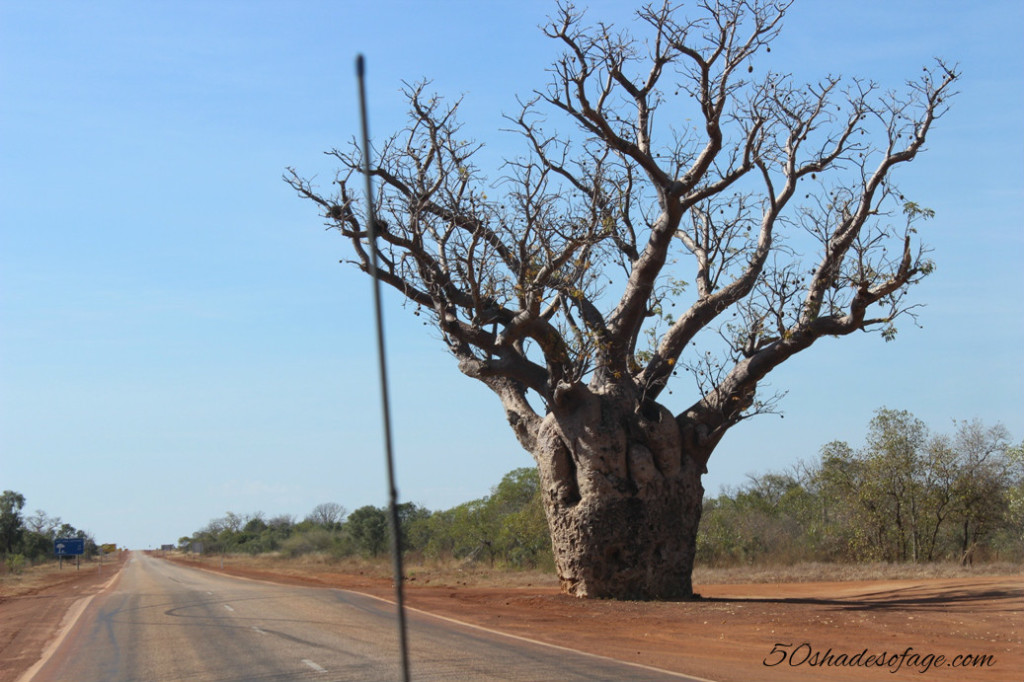 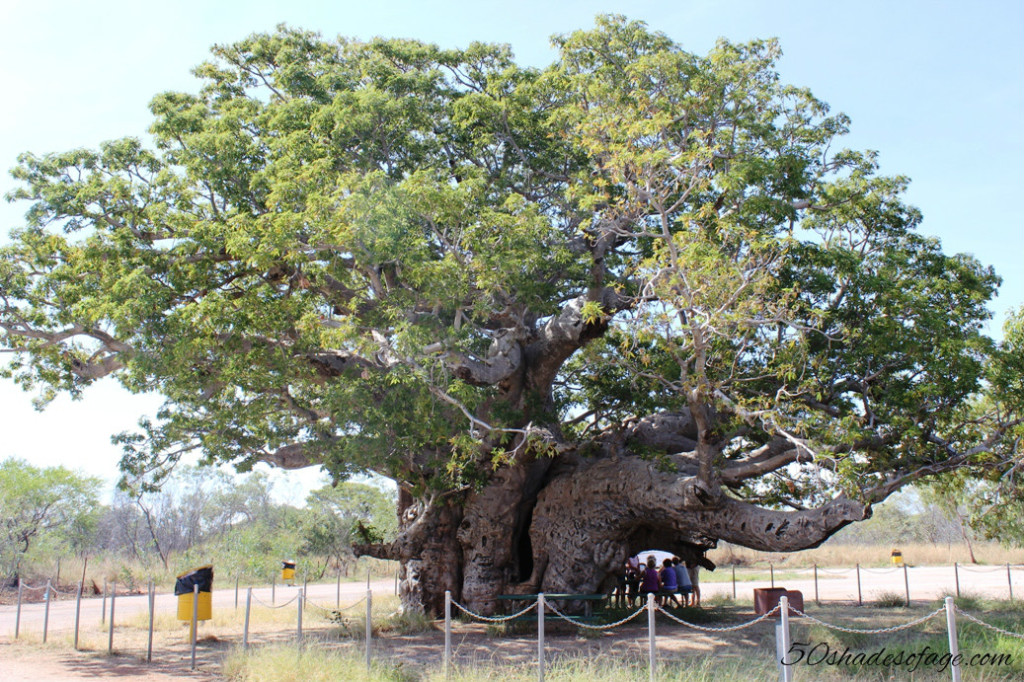 We ventured off the Great Northern Highway onto a gravel road, the Leopold Downs Road which connects the Great Northern Highway with the Gibb River Road. You can use it to cut across from one to the other and visit Tunnel Creek and Windjana Gorge on the way. We however were looking for a camping spot we heard about at an abandoned RAAF Quarry. We were not disappointed as it had fresh water in the disused quarry where we enjoyed a refreshing swim and the quarry was dotted with beautiful boabs. 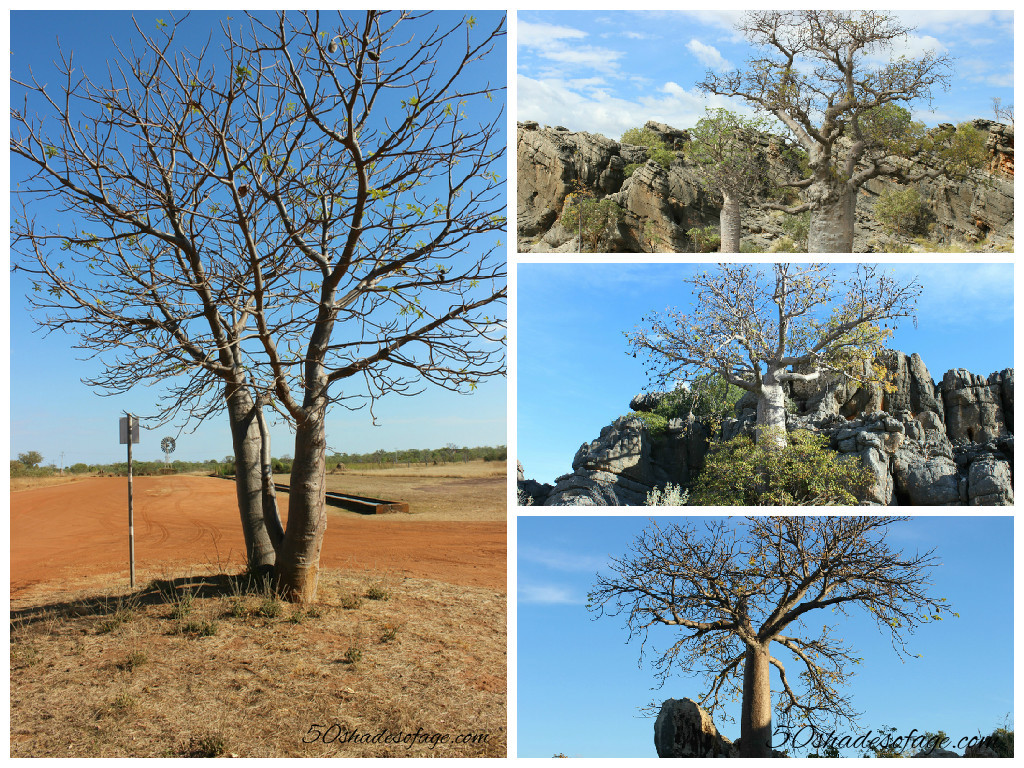 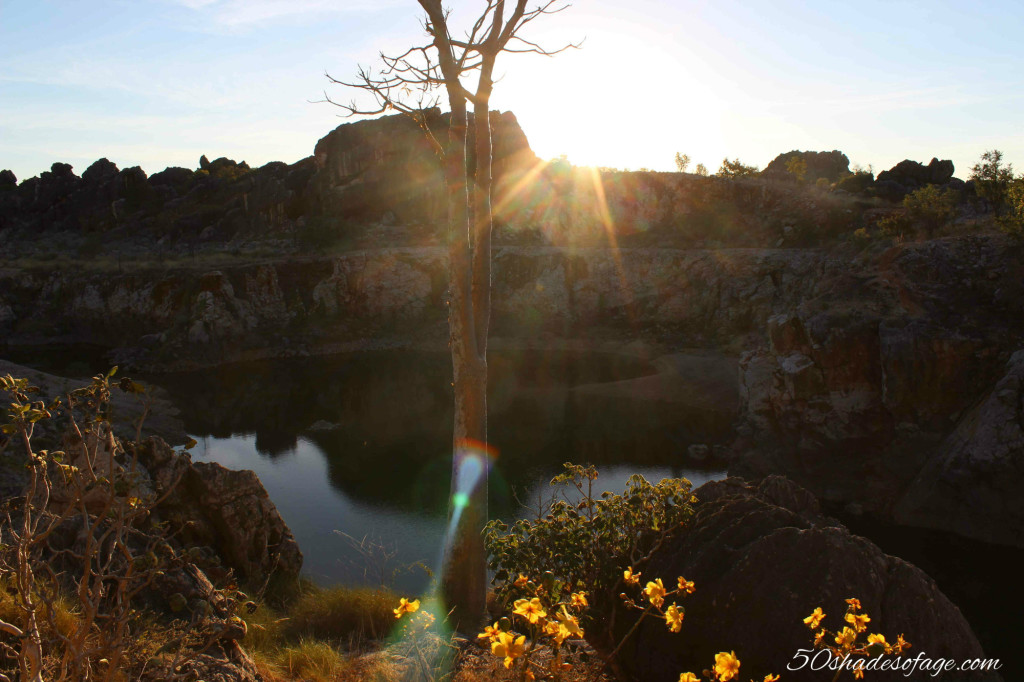 Small Boab at Sunset at RAAF Quarry near Fitzroy Crossing

Once we had driven the 900 kms through the Kimberley on the Great Northern Highway we reached Wyndham. Here we camped at Parry Creek Farm around 20kms outside of Wyndham. We saw many more boabs in and around Wyndham including the largest boab in captivity at the Caravan Park. 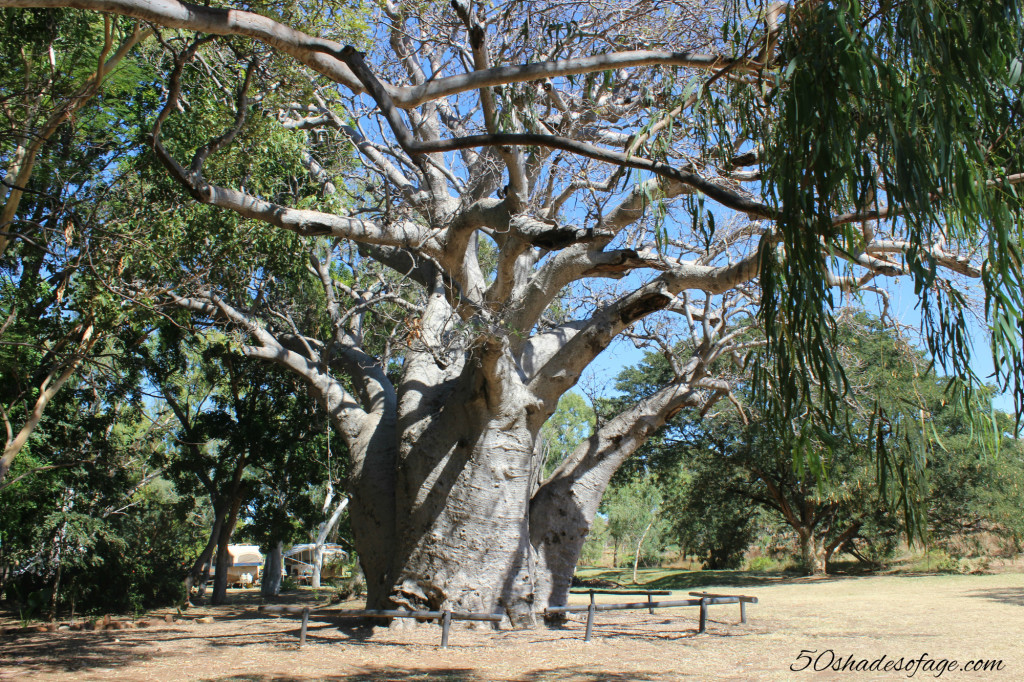 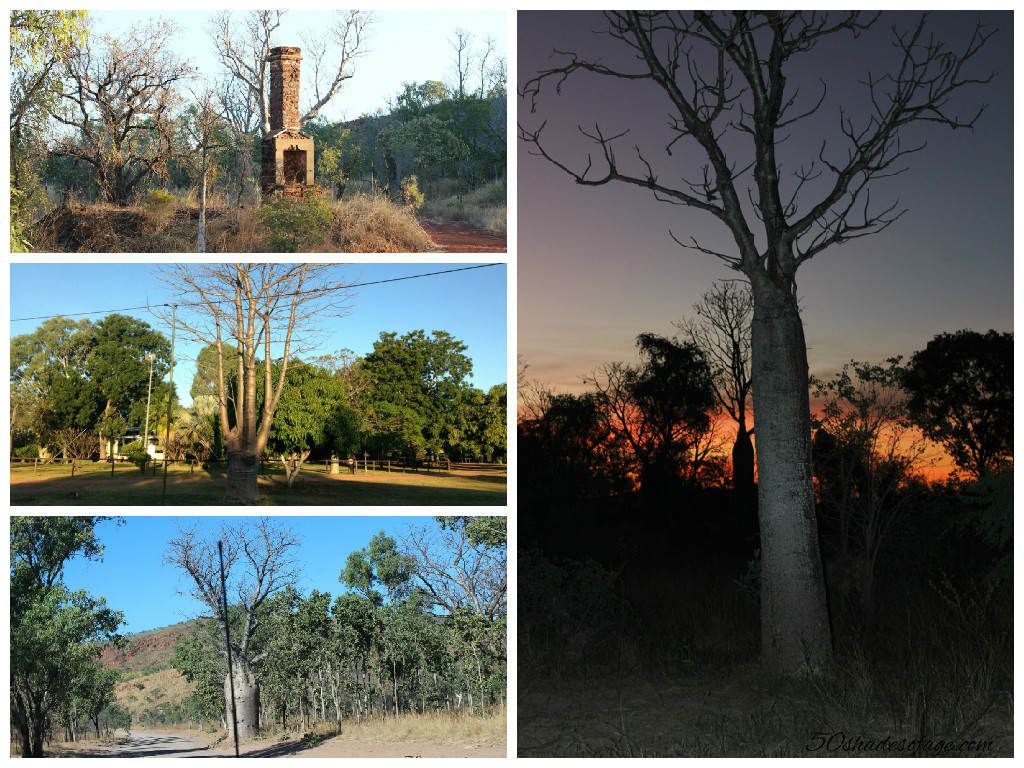 Lastly, but not by any means least, we visited Kununurra and the magical Lake Arygle, which is a massive man-made lake that dammed the Ord River system. Here we stayed lakeside at the Lake Argyle Caravan Park and took in the beauty of this awesome place. 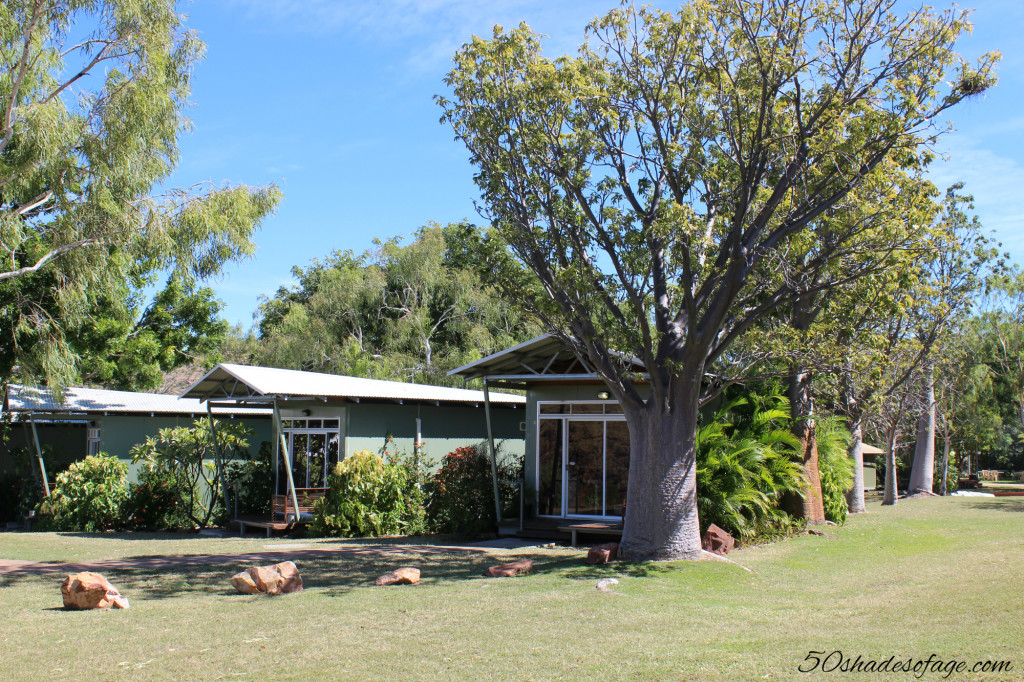 I will leave you with this captivating image of Lake Argyle, the last stop before leaving the Kimberley region for the Northern Territory. Breathtaking! 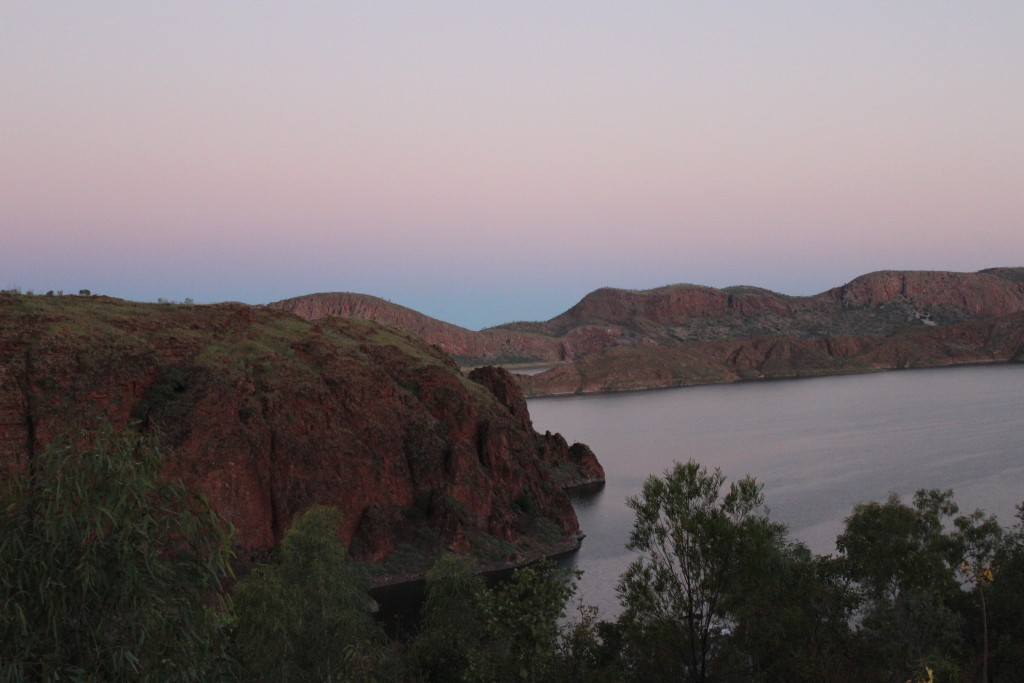 For more posts on The Kimberley region see Swept away by Broome, Kimberley Dreaming and East Kimberley

Spread the love
Australian BoabsBroomeNorth Western AustraliaThe Kimberley
By 50 Shades, August 14, 2015 Kathy was a 50 something year old when she started up this blog 6 years ago, but has since turned over another decade and is now in her early 60s. She is married with two adult children and lives on the Tweed Coast of New South Wales, Australia. Kathy enjoys living life to the fullest and loves to keep fit and active by maintaining a healthy diet and exercising regularly. Some of her interests include reading, photography, travelling, cooking and blogging! Kathy works part-time as a freelance writer but her real passion is travelling and photographing brilliant destinations both within Australia and overseas and writing about it.