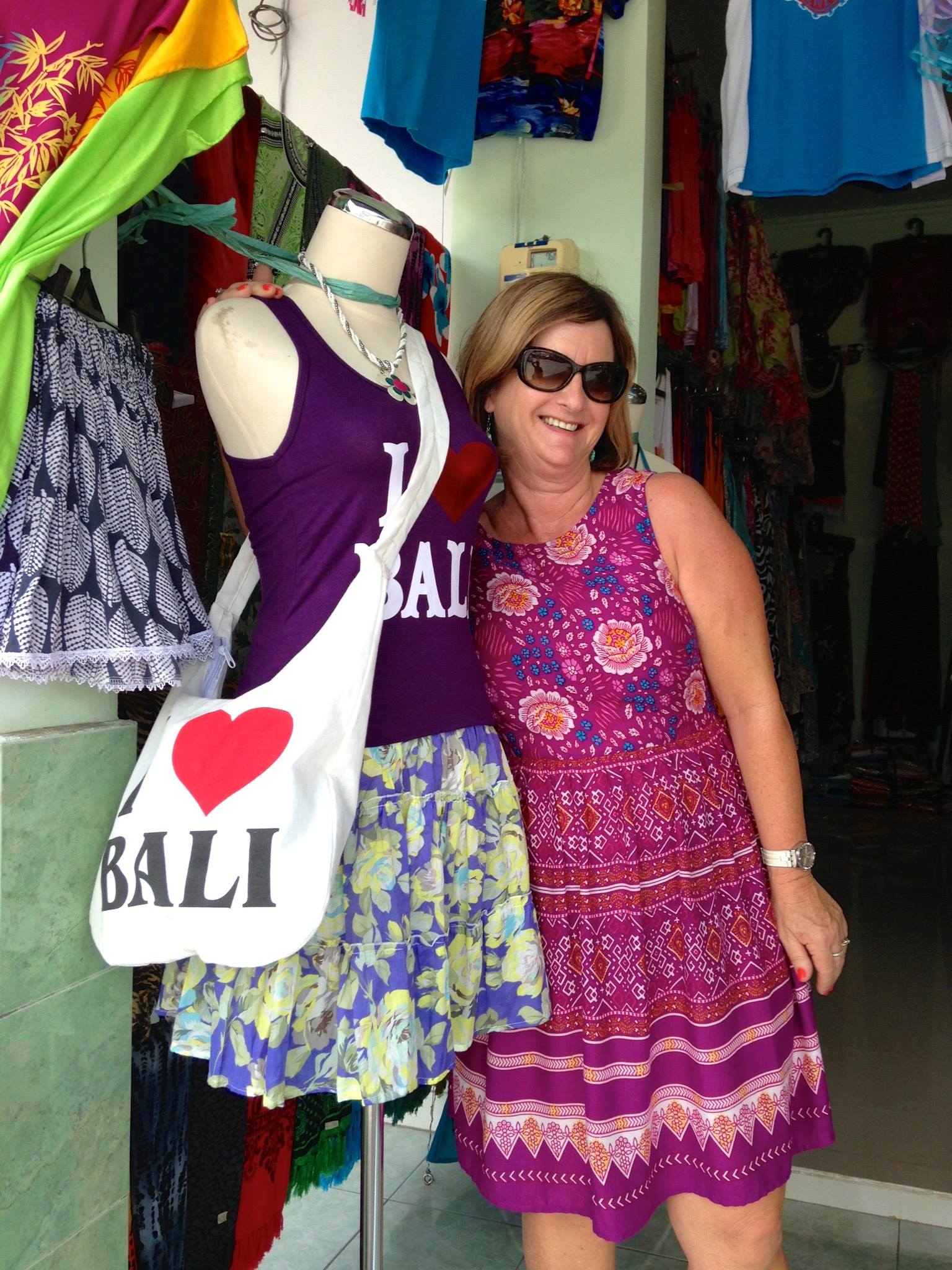 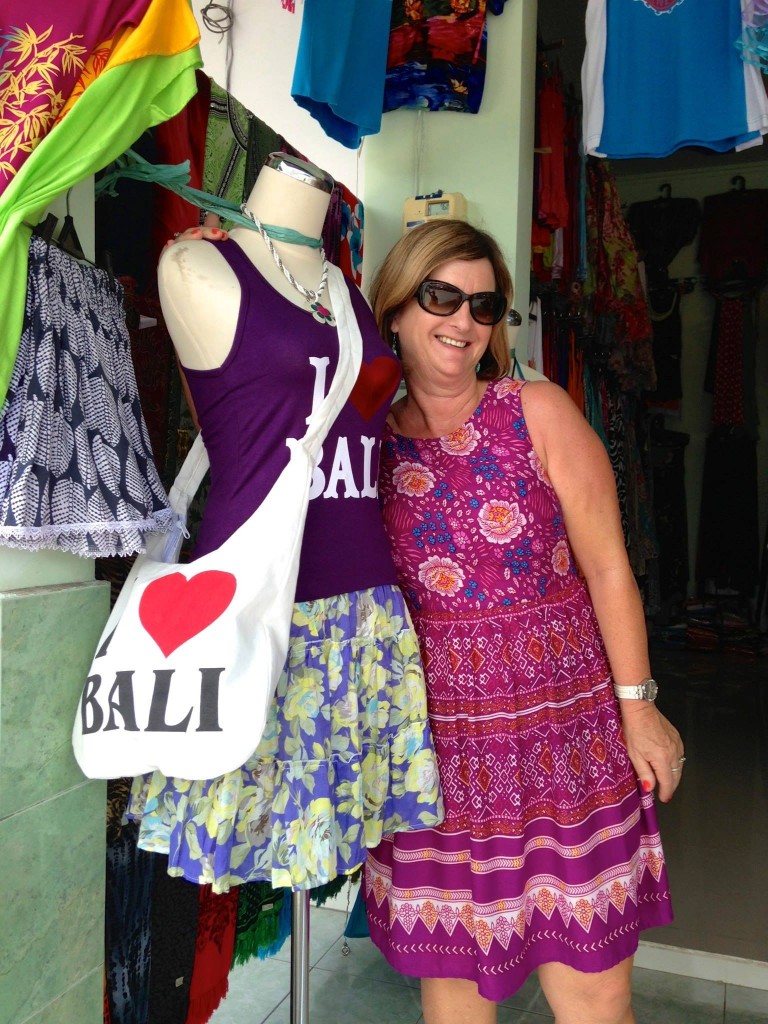 My daughter and I spent a wonderful week in Bali a while ago. We had the loveliest time together doing the ‘girlie stuff’ such as indulging in a manicure/pedicure, treating ourselves to massages and body exfoliations, baking in the sun, drinking cocktails at sunset on the beach, stuffing ourselves with exquisite food and shopping in trendy Seminyak.  It was great to have time out together and fall under the spell of this gentle, hassle-free place.

Bali, Island of the Gods, has a varied landscape of hills and mountains, rugged coastlines and sandy beaches, lush rice terraces and barren volcanic hillsides. With world-class surfing and diving, a large number of cultural, historical and archaeological attractions, and an enormous range of accommodation, it is a very popular travel destination for Australians. Bali has something to offer a very broad market of visitors from young back-packers right through to the super-rich. 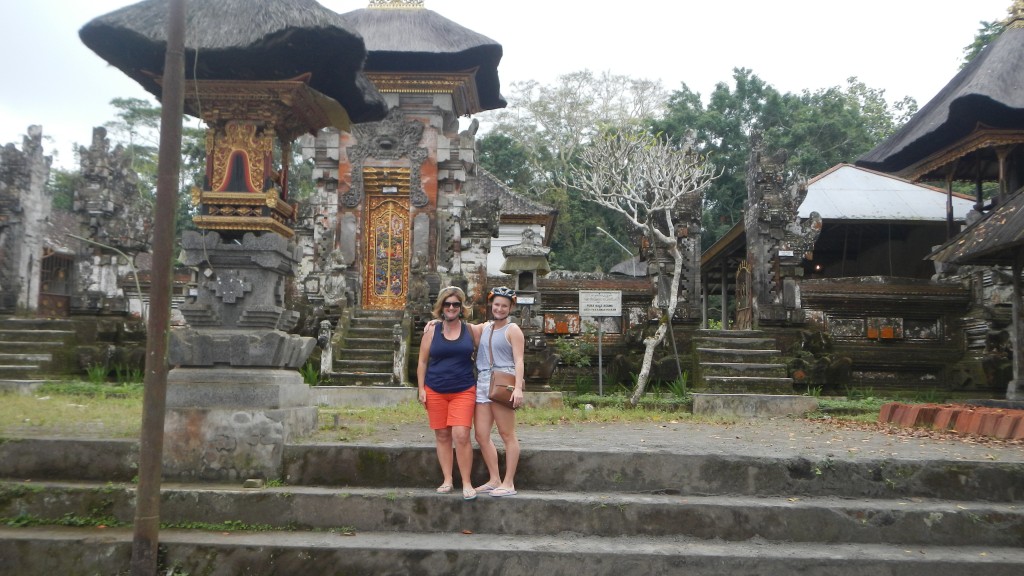 If you have travelled to Asia before you would know what I am talking about when I say that Bali is a complete cultural shock. The traffic is a nightmare, the footpaths almost unnegotiable and there is rubbish littering the streets, but there is no agro and almost everyone one is smiling. There is a feeling of tranquillity.

Bali is probably most famous for the place where Elizabeth Gilbert found love, as the character in the book and subsequent movie, titled Eat, Pray, Love. 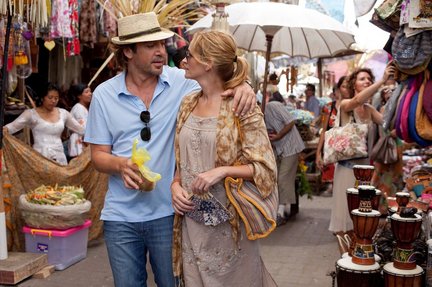 But it’s also famous for another more sinister reason – the Bali Bombings in 2005, where 202 innocent tourists, (including 88 Australians), were killed. I have to admit that this was one of the darkest days for me, particularly because I had friends holidaying there when it occurred and they recounted the horrors of that night in Kuta Beach. For years afterwards I said I would never go there as it wasn’t safe. 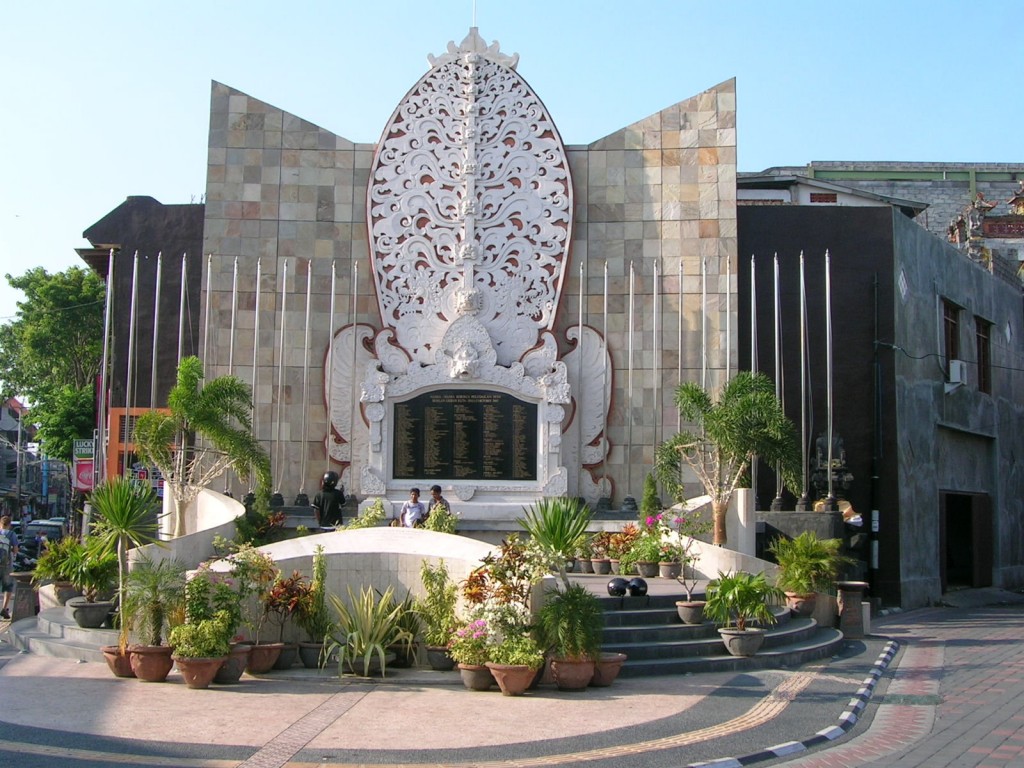 But, even though stringent security measures remain in place, the sense of returning confidence is palpable. In the main tourist area, the three-mile strip of coast that stretches from Kuta to Seminyak, the streets are overflowing with life. Flash modern hotels adjoin traditional Hindu temples and up-market restaurants compete with makeshift stalls selling satays.  Swish fashion boutiques sell the latest fashions and the markets are bursting with ‘knock-off’ Gucci handbags and Rip Curl T Shirts.

We stayed at a new resort called Amadea Resort & Villas, in the middle of Seminyak, smack bang in the ‘Eat Street’ area where there was a huge selection of fine dining to choose from. The beach was a short walk of about 500 metres away, however we were mainly happy to lounge around the beautiful pool area at our resort. 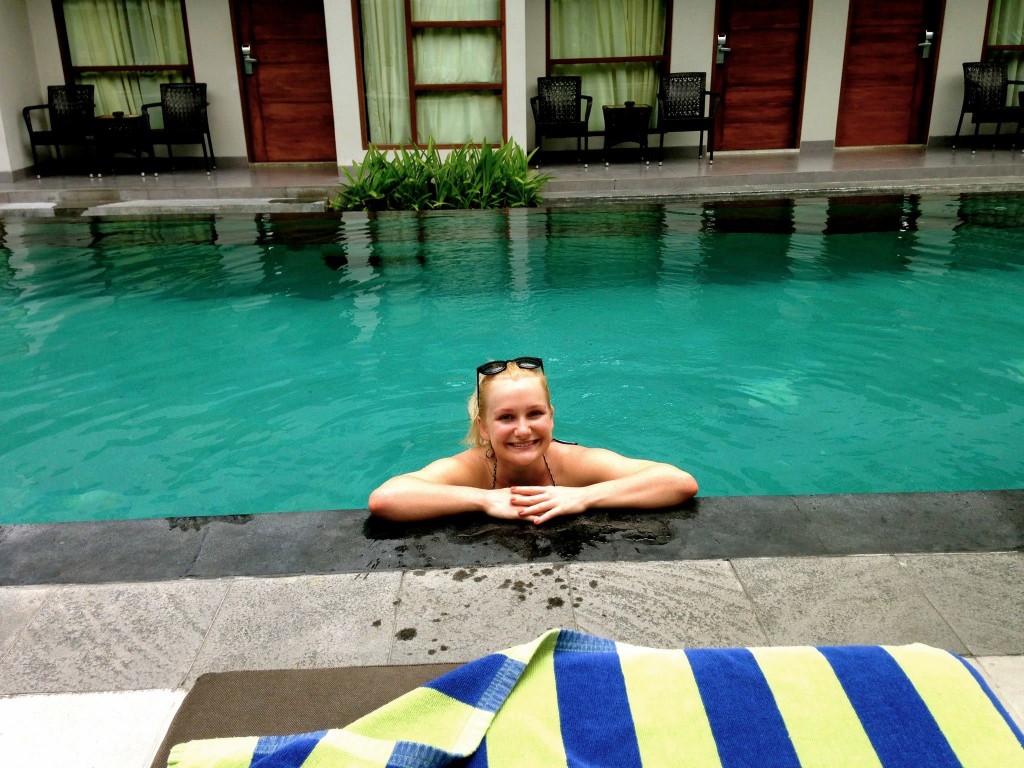 During our stay we did two day trips; the first was to the centre of the island to a place called Kintamani which is overshadowed by the active volcano Mount Batur. After a morning tea of banana fritters and a cup of coffee we set off on some rather dodgy bicycles on a 40 kilometre downhill bike ride through the countryside, stopping to rest and enjoy the sights of Hindu temples in the many small villages dotted along the way, verdant rice paddies and a typical rural household. Once we raced down the steep incline for four or so hours we stopped for a very welcome lunch of local Balinese food and a beverage or two. It was a very worthwhile tour, even though my backside was bruised and sore for days afterwards! 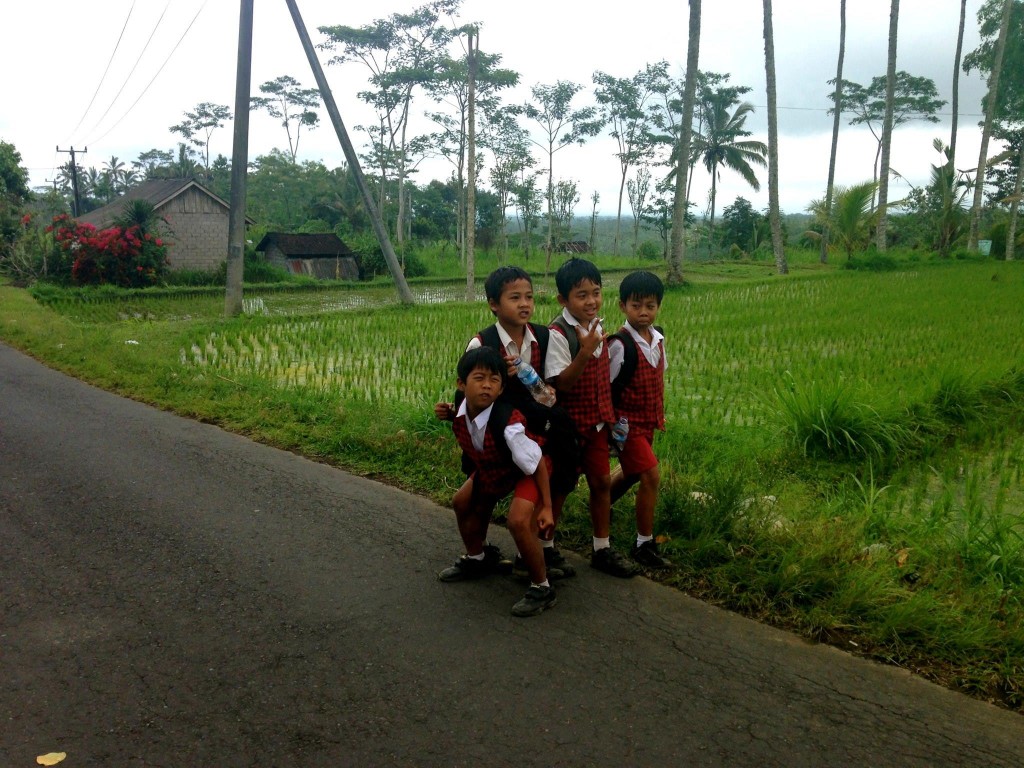 Balinese school boys walking to school through the rice paddies

Our second day trip was out to Uluwatu on the Bukit Peninsula to the beautiful Padang-Padang Beach which is accessed down a hundred or so stairs through a cave. The aquamarine water and the limestone rock formations were spectacular. The surf was pumping out the back and we watched surfer after surfer take off on these massive waves. We enjoyed a lovely swim in the clear aqua water – very refreshing! 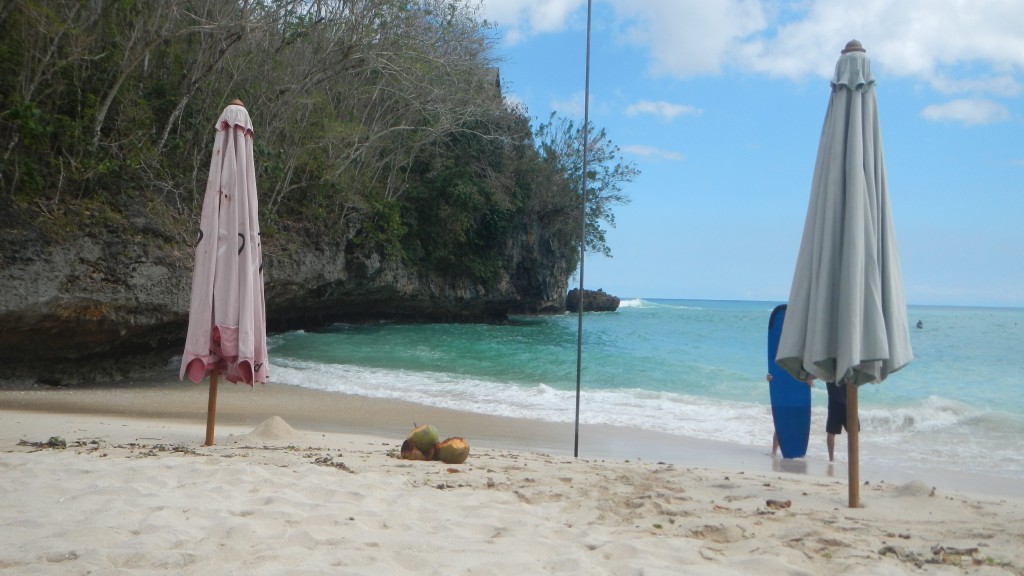 A few kilometres further we visited the Uluwatu Temple which is perched high on a cliff at the end of the peninsula. It dates back to the 11th century. The temple is inhabited by large numbers of monkeys, who are extremely adept at snatching visitors’ belongings, including bags, cameras and sunglasses. We left all but our cameras in the taxi and walked around the footpath on the edge of the 70 metre cliff in our purple sarongs (which were mandatory) with a bunch of bananas to feed the monkeys. The scenes were breathtakingly beautiful. 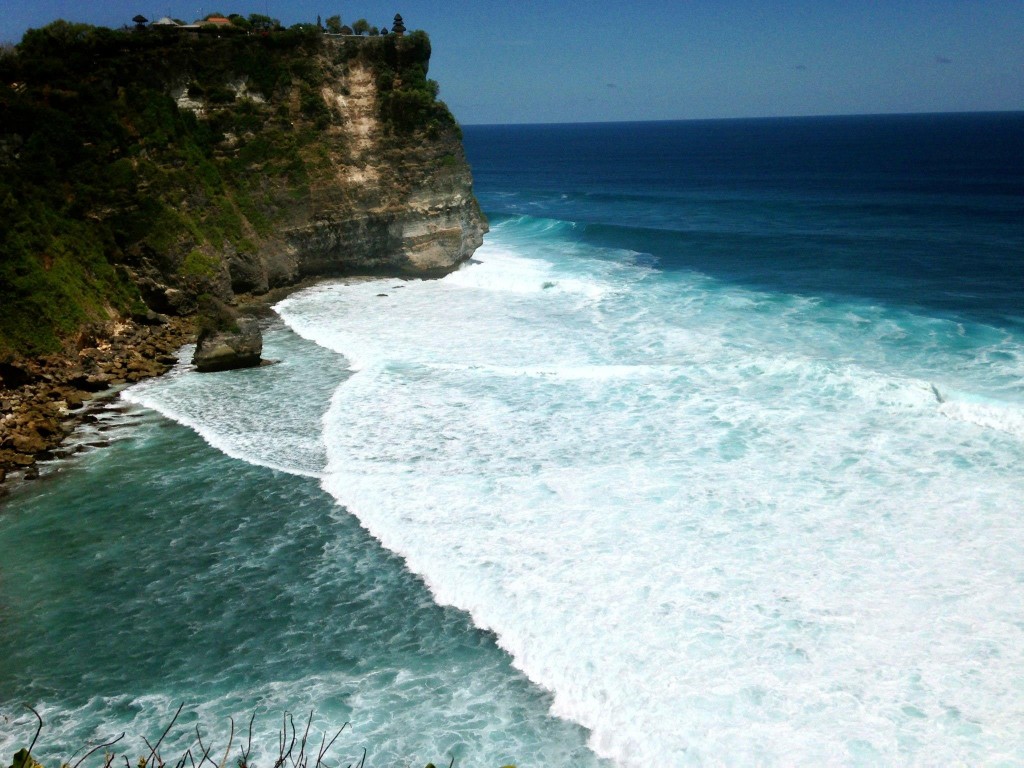 Uluwatu Temple on the Bukit Peninsula

A trip to Bali would not be complete without partaking in a cocktail and watching the sunset at the very famous Potato Head Beach Club which is located on Seminyak Beach. This is the place where all the beautiful people like to be seen donning their very brief g-string bikinis and Raybans! A great place to ‘people watch’ and take some photos of the magnificent sunset over the Indian Ocean. 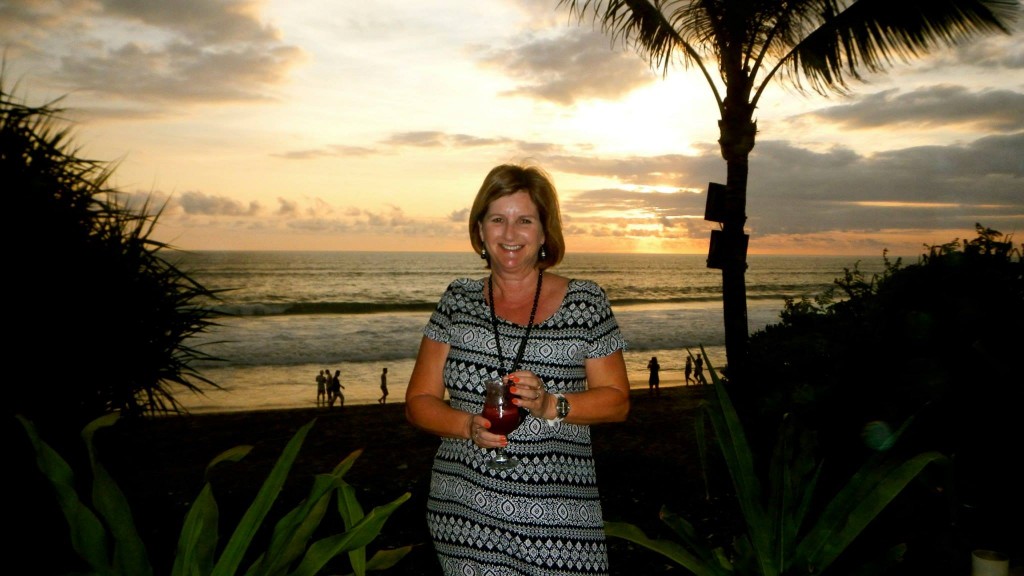 As for the food, where do I start!  There are so many great cheap places to eat. Luckily we met a fellow Aussie on one of our tours who gave us an extensive list of ‘where to eat’ around Seminyak. We enjoyed beautiful freshly made salads at Grocer & Grind and Zucchini, great coffee at Sea Circus, nice pastries at the Bali Bakery, extremely good Japanese food at Dehana, Indonesian fare at Biku, a taste of Moroccan and local cuisine at Khaima. We ventured into nearby Legian for a seafood feast at Tekor on the beach front – very reasonably priced. It never cost more than $50 for two for a main meal, a couple of drinks and dessert – amazing! 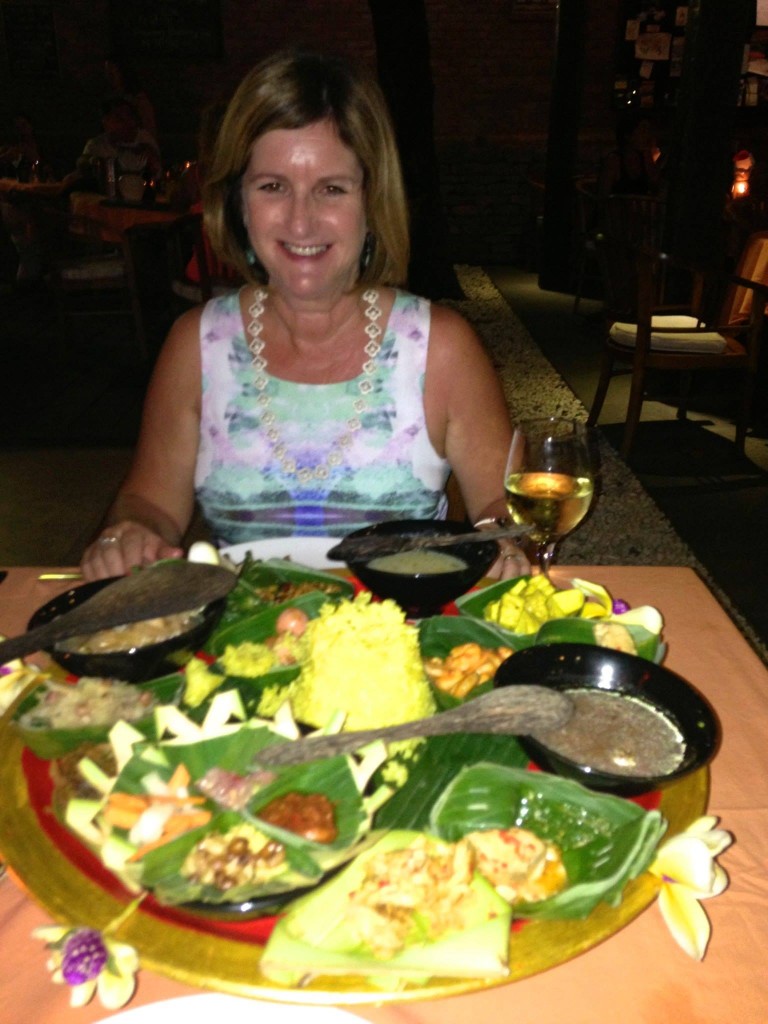 We were very decadent and treated ourselves to a two hour full body massage and exfoliation for around $40 at the nearby Bodyworks Spa. We also had another exquisite hour long massage at Wellbeing Spa for $15. We had manicures and pedicures with gel nail polish applied in a place in Legian for $22. A small price to pay for such indulgence! 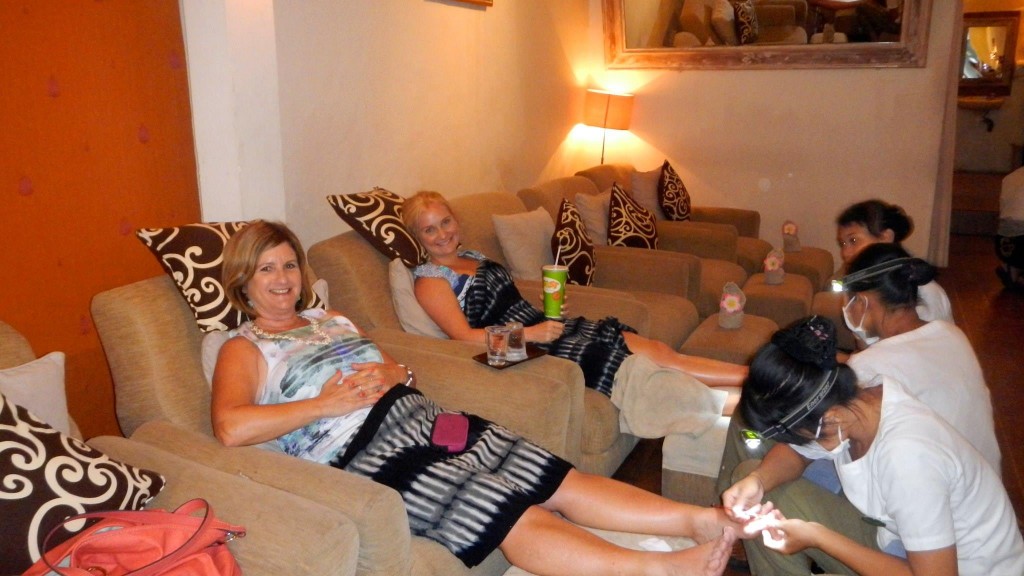 Our week flew by very quickly, but we certainly returned home with happy memories of this Indonesian island paradise and a promise to return again soon. What I loved the most was the Balinese people and their happy dispositions and laid back attitudes. They live so simply and always have a big smile on their faces. Bali you have earned a place in my heart!

Linking up with Wanderlust Wednesday

Spread the love
Bali holidayGirlie HolidayTravel BaliTropical holiday
By 50 Shades, April 29, 2015 Kathy was a 50 something year old when she started up this blog 6 years ago, but has since turned over another decade and is now in her early 60s. She is married with two adult children and lives on the Tweed Coast of New South Wales, Australia. Kathy enjoys living life to the fullest and loves to keep fit and active by maintaining a healthy diet and exercising regularly. Some of her interests include reading, photography, travelling, cooking and blogging! Kathy works part-time as a freelance writer but her real passion is travelling and photographing brilliant destinations both within Australia and overseas and writing about it.