From active volcanoes to island sanctuaries, secluded bays, harbours bulging with yachts, and rich Maori culture, the North Island of New Zealand is jam packed with interesting sights and landscapes. And the good news is that it’s only a 3 hour flight from Australia. Check out the latest fabulous flights and prices.

The North Island or Te Ika-a-Maui is one of the two main islands of New Zealand, separated from the slightly larger but much less populous South Island by Cook Strait. It has the country’s largest city, Auckland as well as the capital, Wellington at either ends of the island. 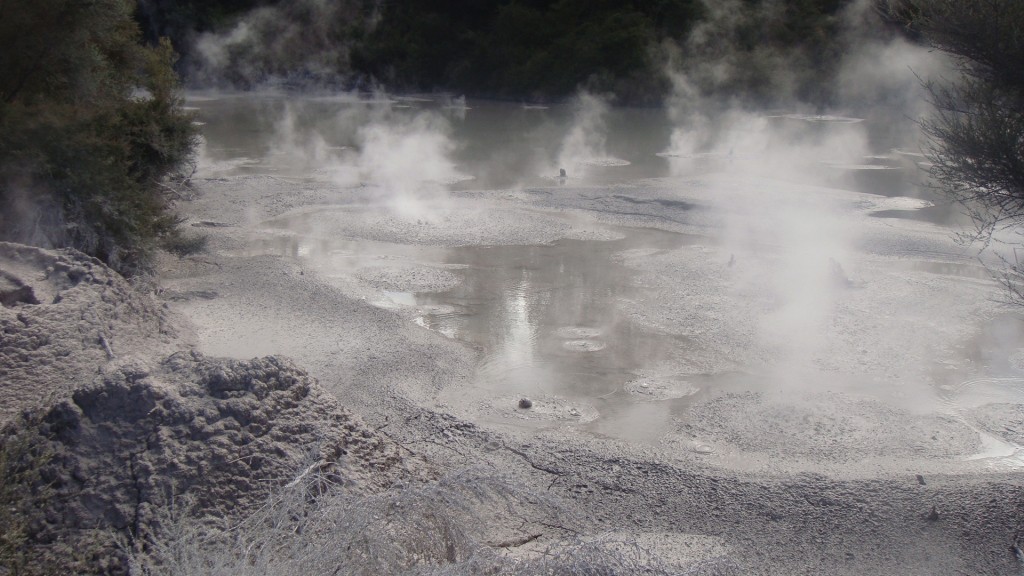 The best way to see this fascinating country is by hiring a car and doing a self-drive tour or by one of the many bus tours. As you meander through the ever-changing terrain there is a blend of magnificent coast, sprawling farmlands and geothermal wonders.

My 7 day itinerary started and finished from the largest Polynesian city in the world, Auckland. Sometimes called the ‘city of sails’ because of its huge sailing fraternity. This map shows where our road trip took us. 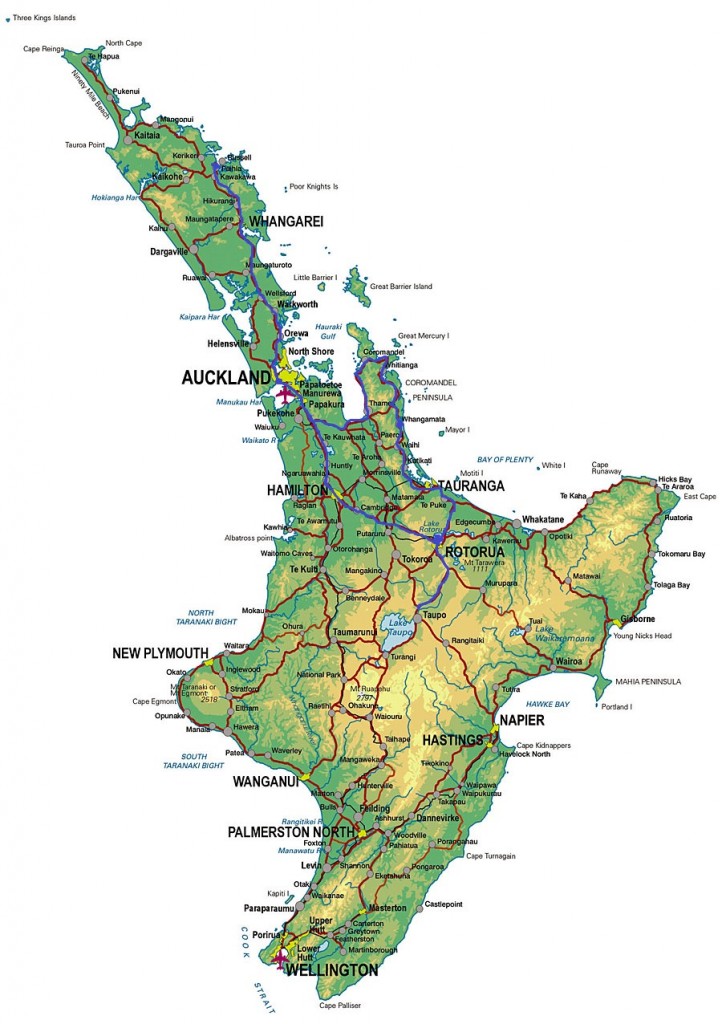 We arrived into the city of Auckland that lies on and around an isthmus, less than two kilometres wide at its narrowest point, between Mangere Inlet and the Tamaki River. There are two harbours in the Auckland urban area surrounding this isthmus: Waitemata Harbour to the north, which opens east to the Hauraki Gulf, and Manukau Harbour to the south, which opens west to the Tasman Sea.

It is an extremely picturesque city with this ‘city of sails’ boasting 135,000 registered yachts and launches and renowned in yachting circles for hosting two America’s Cup challenges (2000 Cup and 2003 Cup). 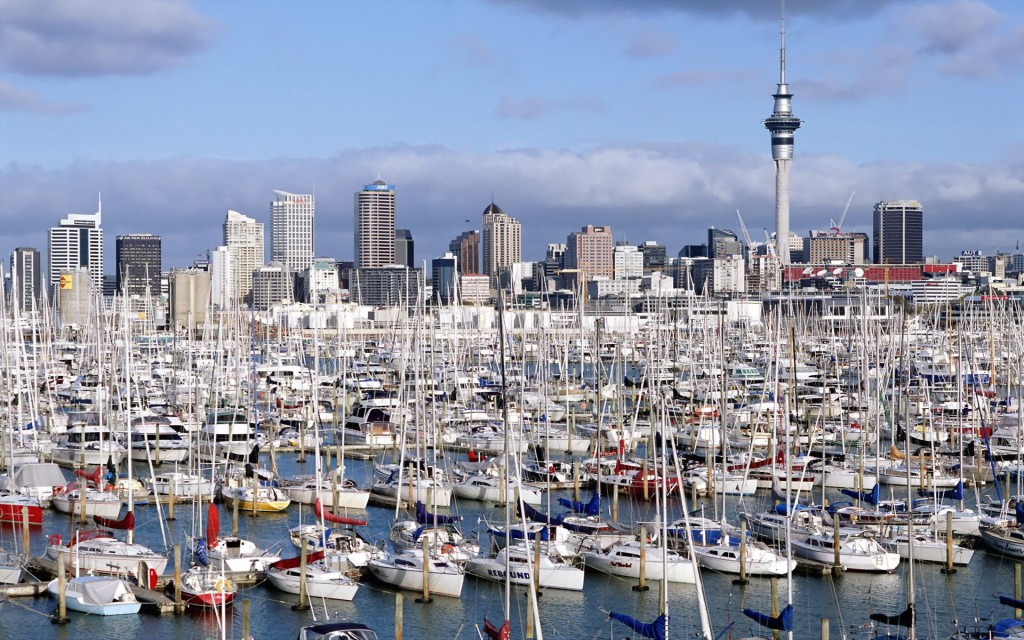 Our short one night stay in Auckland only allowed enough time for a quick stroll through the city taking in the magical sight of the 328 metre high Sky Tower which predominates the skyline. For an unforgettable experience you can do a sky jump or a sky walk from the tower. For the ‘not so brave’ there is an observation deck called sky deck and a cafe and bar with views to die for over Auckland city and harbour.

Our wanderings bought us to the Auckland’s Waitemata Harbour where you can board a harbour cruise or sailing adventure or visit the New Zealand National Maritime Museum. The harbourside is crowded with some of Auckland’s finest restaurants where you can sample some freshly prepared New Zealand produce or just sit back and relax with a glass of crisp Sauvignon Blanc. 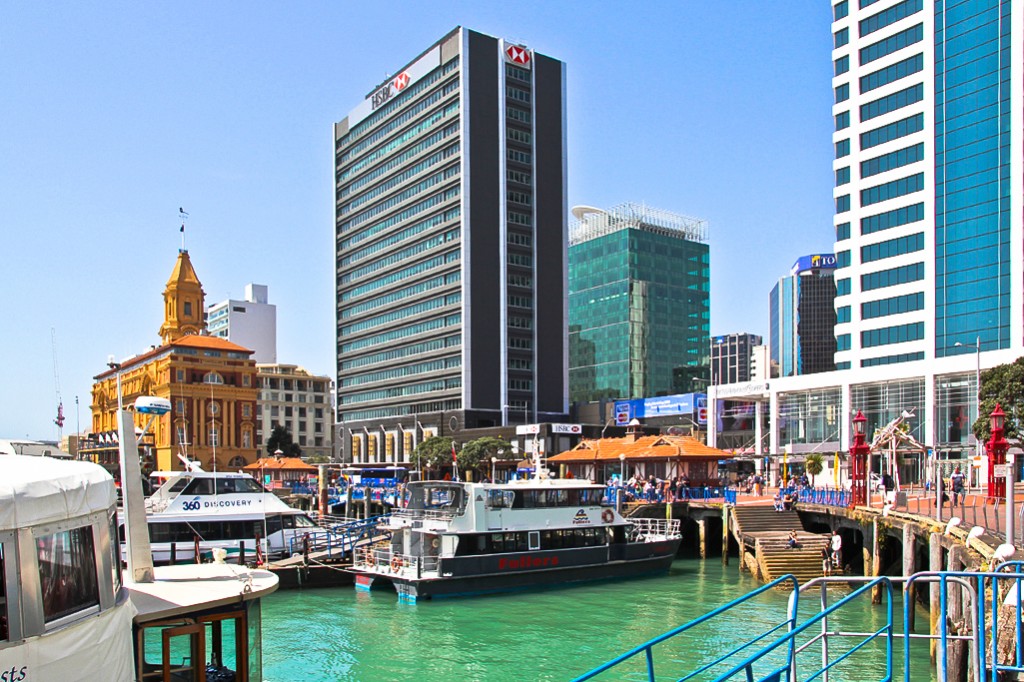 We set off in our hire car northwards to the Bay of Islands. The scenery was hilly, lush and green with a few vineyards along the way. We stopped at Ransom Winery about one hour out of Auckland and tasted some nice white wines. 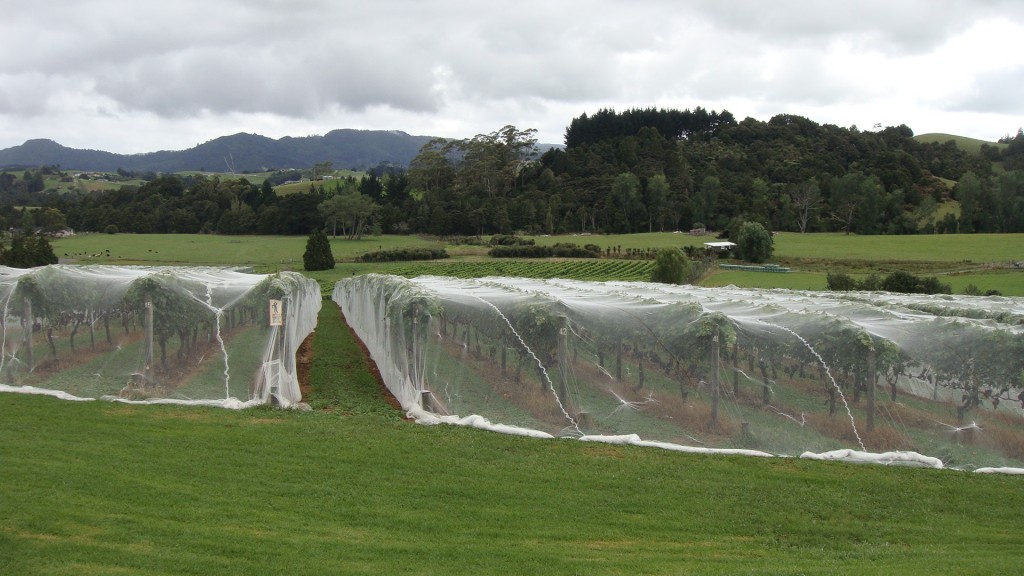 We continued another two hours to our destination, the Bay of Islands, encompassing 144 islands between Cape Brett and the Purerua Peninsula and includes the boutique towns of Opua, Paihia, Russell and Kerikeri. 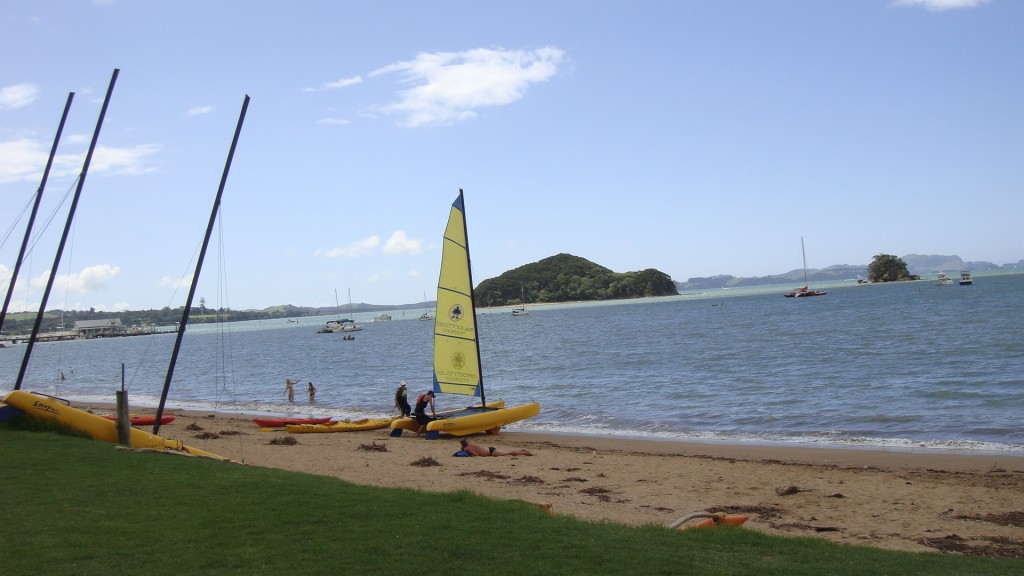 The Bay of Islands is a subtropical micro-region known for its stunning beauty & history. For those that love beaches and water activities, it’s paradise. Our accommodation was at a hotel which had stunning views out to these group of islands. 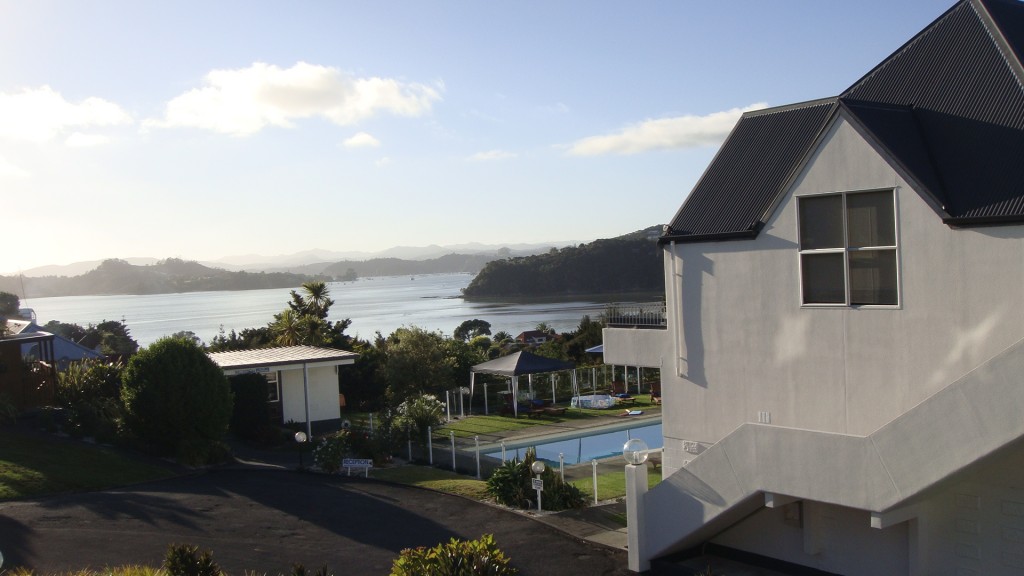 View from our Hotel at Paihia

During a walk around the wharf area, where most of the charter boats operate out of and ferry service to nearby Russell, we were treated with a fishing charter boat returning with a massive prize – a Blue Marlin. 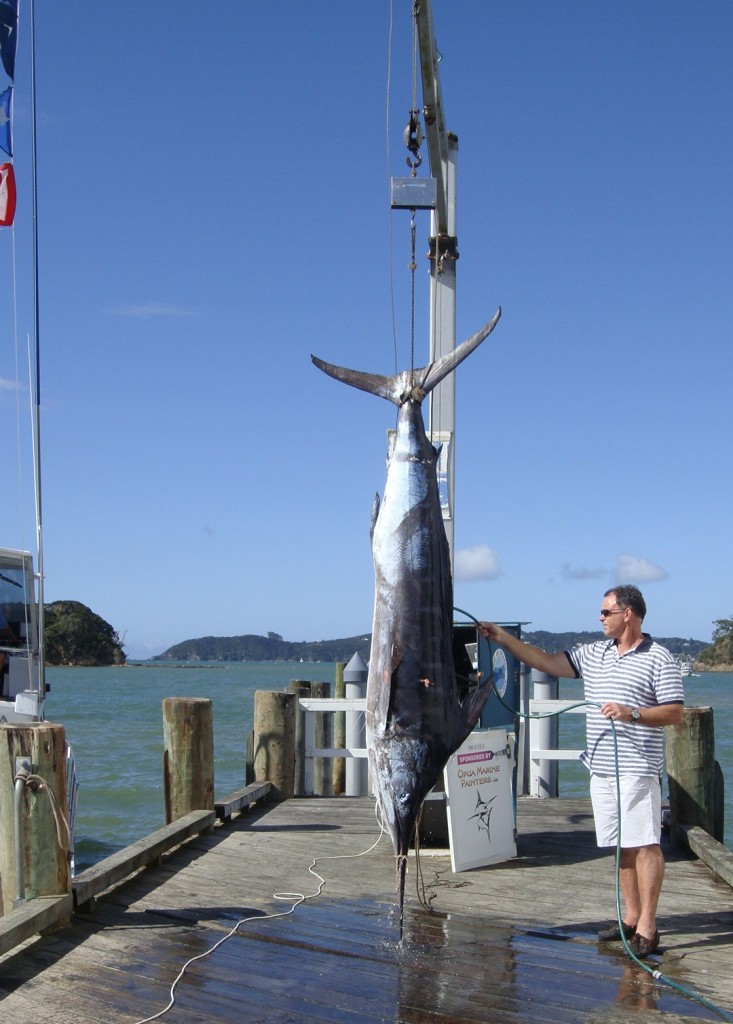 Catch of the Day

The following morning began with a ferry ride over the bay to the old whaling village of Russell, which was the country’s first sea port. It still retains its charm with historic buildings and a seaside setting full of cafes, restaurants and art galleries. 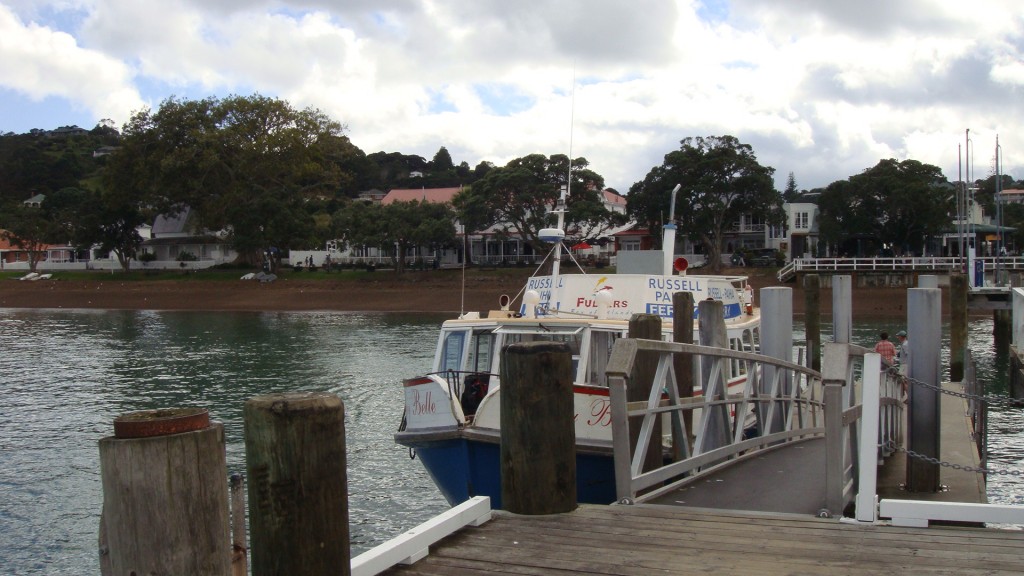 A stroll around the streets will lead you to the Catholic Mission ‘Pompallier’, which is New Zealand’s oldest surviving Roman Catholic building and the Christ Church, the oldest existing church in New Zealand, which still carries musket ball holes from the New Zealand Land Wars. 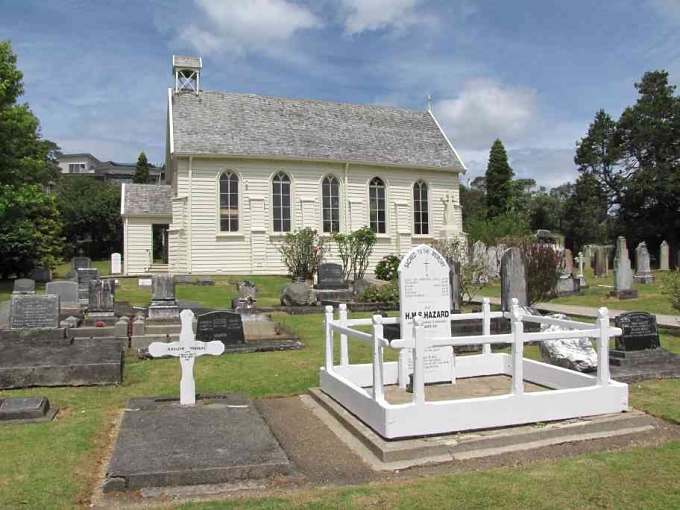 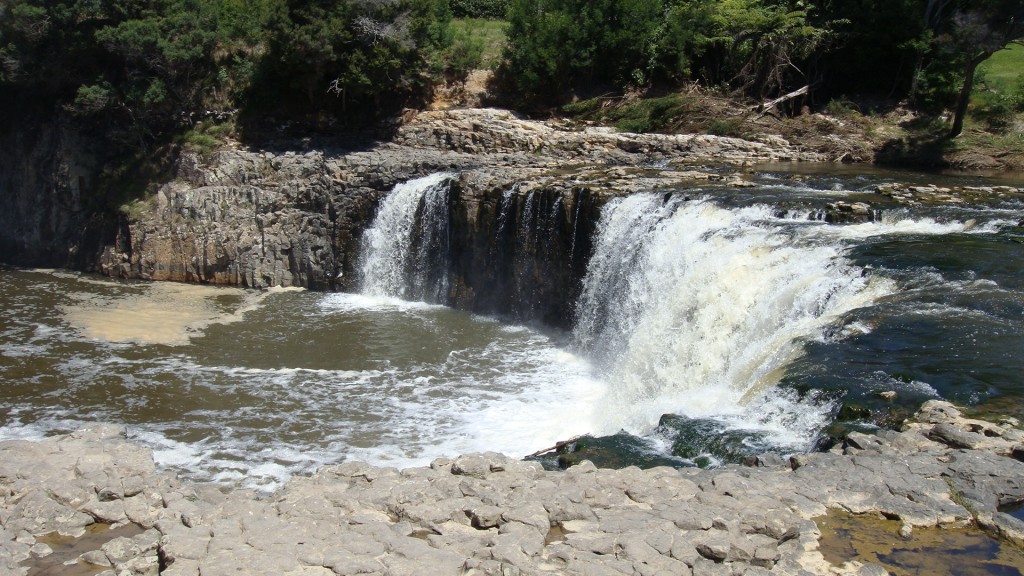 A further 20 Kms through orchards with roadside stalls, we came to the northland town of Kerikeri. The town itself is full of galleries, cafés and gourmet food shops. For nature lovers, the 10 minute walk to Rainbow Falls offers the chance for a picnic amid native bush and birdsong.

There are two historical buildings of significance – Kemp House, New Zealand’s oldest standing European building and the Stone Store, which dates back to 1832. 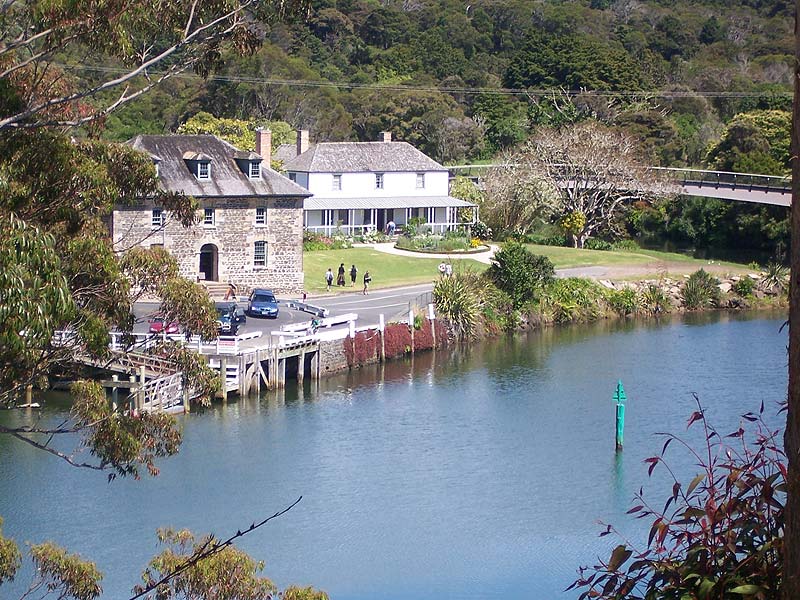 After two wonderful days in the Bay of Islands region we headed southwards back towards Auckland and then west for 55 Km onto the Coromandel Peninsula.

The Coromandel Peninsula extends 85 kilometres north from the western end of the Bay of Plenty, forming a natural barrier to protect the Hauraki Gulf and the Firth of Thames in the west from the Pacific Ocean to the east. 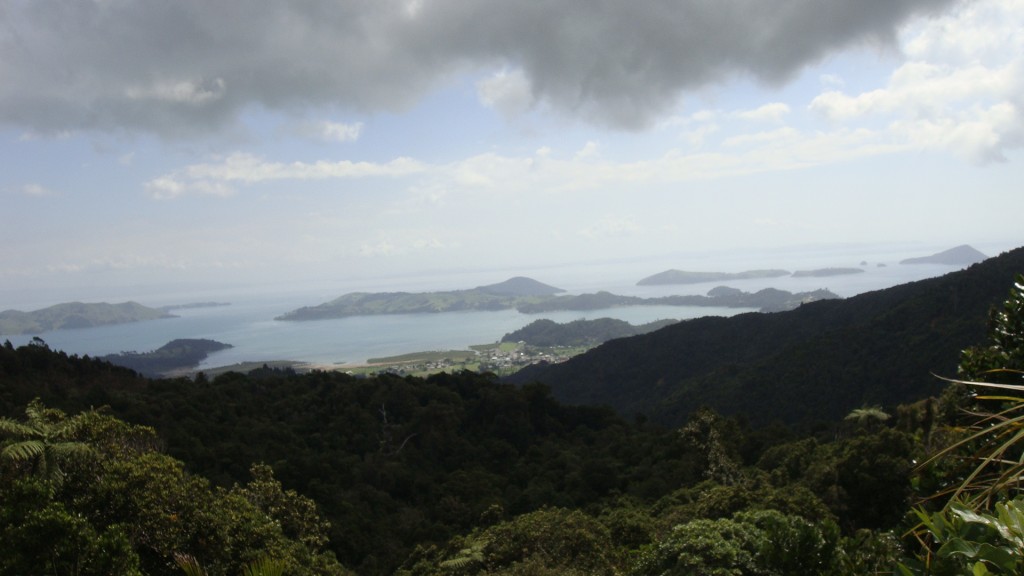 Views from the Coromandel Ranges

We discovered that the peninsula is steep and hilly, and is largely covered in temperate rainforest. The Coromandel Range forms a spine for the peninsula rising to nearly 900 metres, with the large island of Great Barrier lying beyond the northern tip. 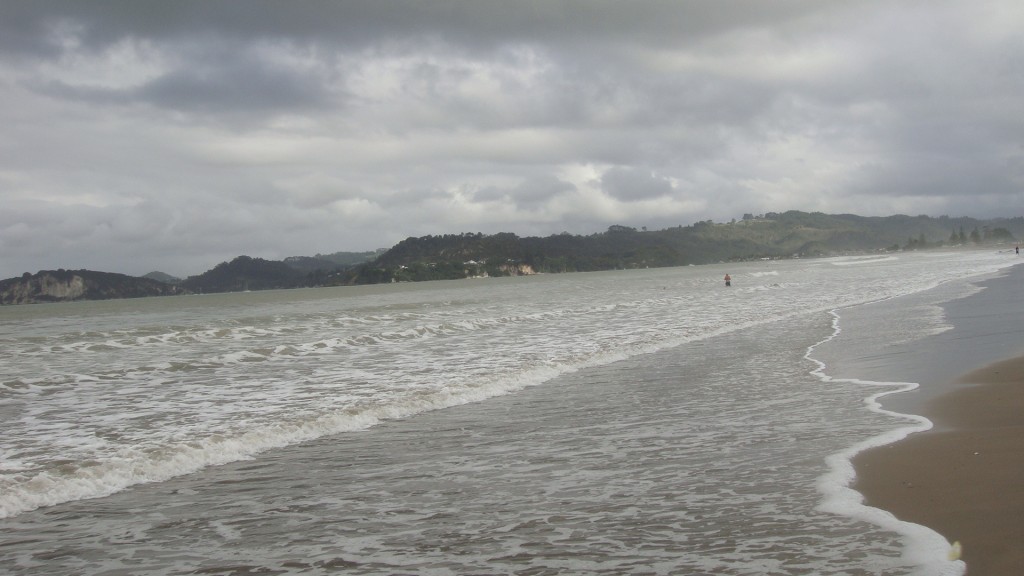 Renowned for its natural beauty – rural farmland, misty rainforests and pristine golden beaches, the Coromandel is blessed with hundreds of natural hideaways. After a quick tour of the town of Coromandel our hideaway of choice was at the seaside town of Whitianga. It is the home of the world renowned Cathedral Cove, Hot Water Beach and Mercury Bay, known for its endless marine experiences both on and under the water. 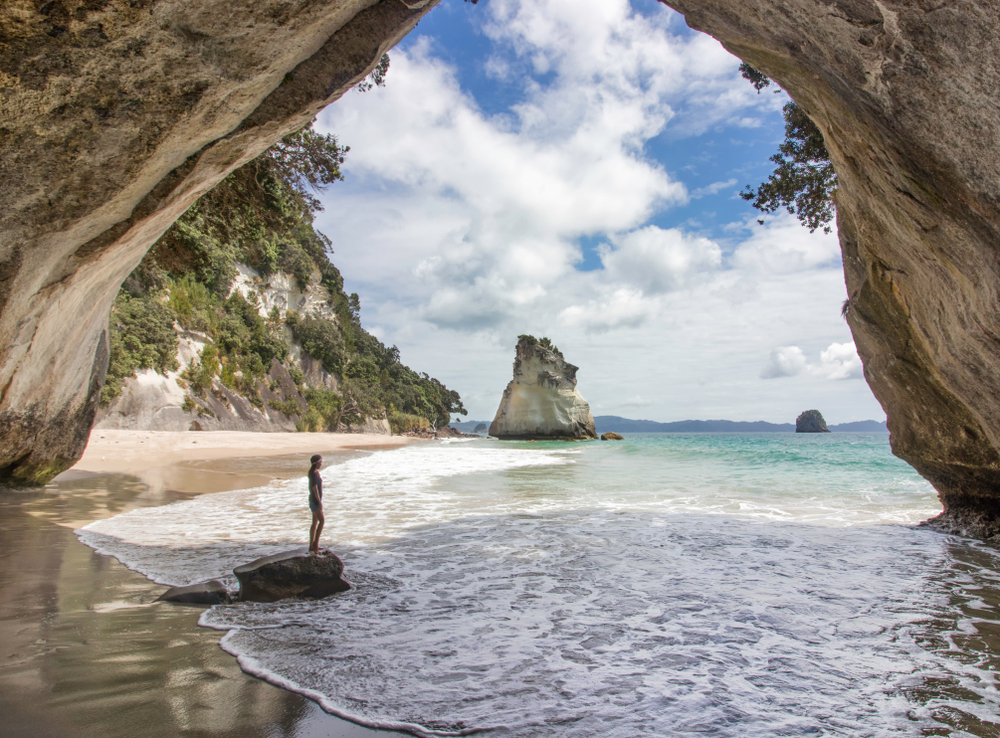 We departed the Coromandel Peninsula, via Tauranga and drove inland to the city of Rotorua which is located on the southern shores of the lake of the same name, in the Bay of Plenty Region of New Zealand. 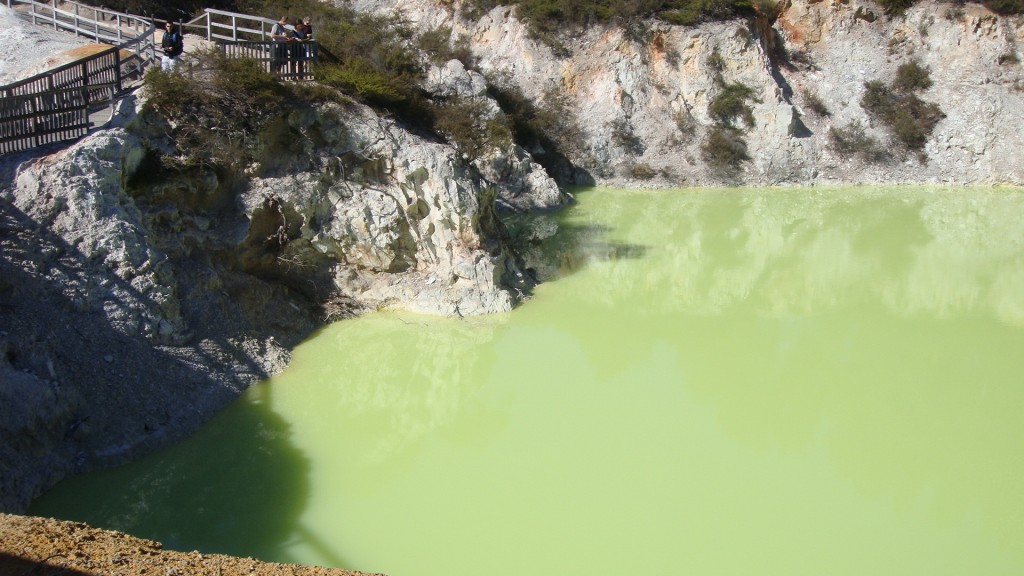 Our first task was to indulge ourselves at the Polynesian Spa where we partook in a soak in the varying temperatures of the hot thermal baths, followed by a relaxing mud bath and water therapy/massage. Very therapeutic.

Walking around Rotorua Lake waterfront, we watched the elegant black swans and ducks swimming on the lake. You can cruise Lake Rotorua on a traditional paddle steamer or hop on board an amphibious WWII landing craft and experience the lakes with Rotorua Duck Tours. 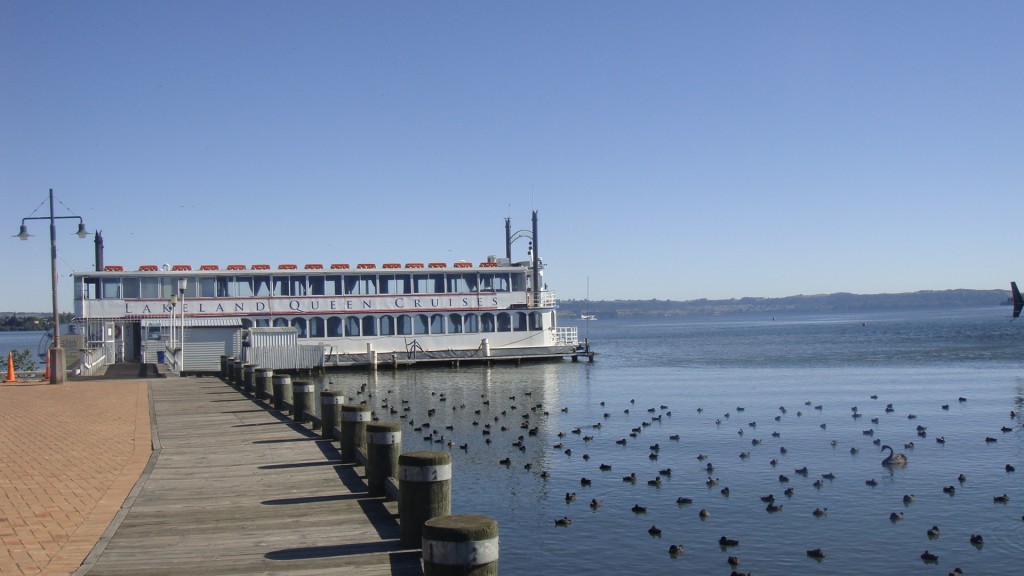 We visited the Waiotapu Thermal Wonderland where we witnessed the erupting geyser, burbling mud pools and thermal pools in various colours. 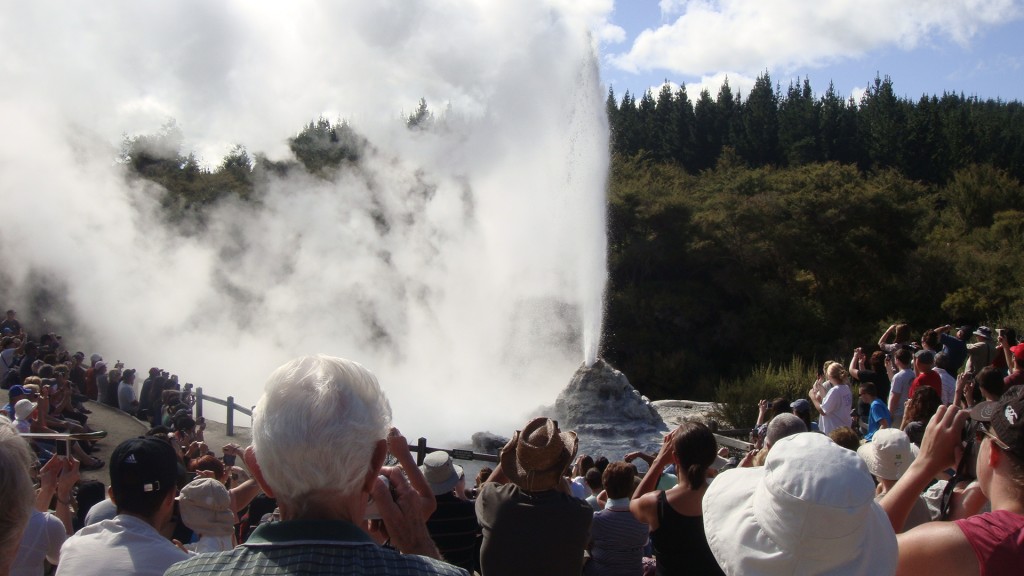 Next stop was at the picturesque Haku Falls and at the Haku River where the jet boats thunder down the river performing manoeuvres. Further south we took in the splendour of the great Lake Taupo, which is the largest lake in New Zealand.  It is a noted trout fishery with stocks of introduced brown trout and rainbow trout. 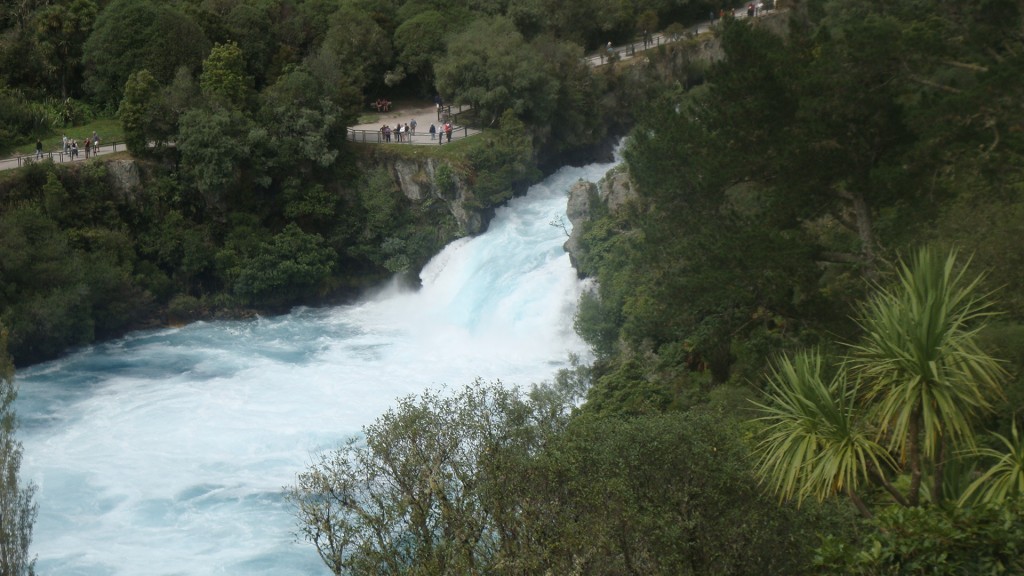 The town of Taupo is a tourist hot spot with its incredible lake and mountain vistas and exhilarating activities on offer. 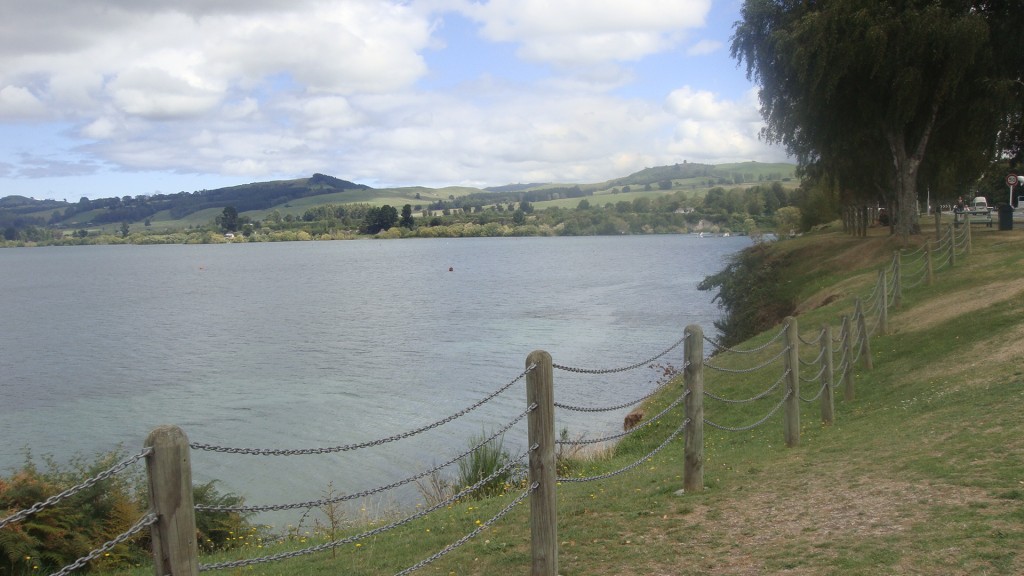 On the last day of our North Island tour, we drove back towards Auckland to catch our flight later on that day. We stopped at Cambridge, a town of racehorse stud fame, producing some of the winners of the Melbourne Cup, such as Van Der Hum, Ethereal and Might & Power. 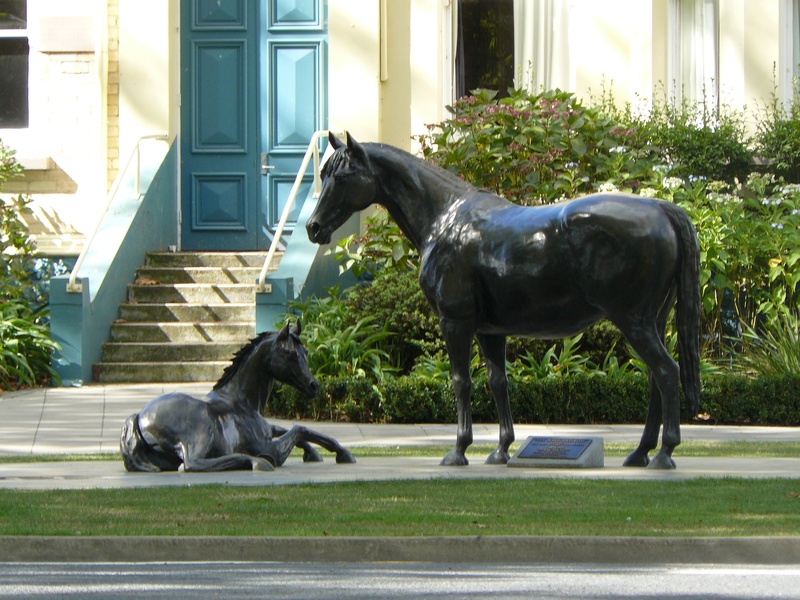 We drove onto the city of Hamilton in the Hamilton-Waikato region; a land of lush pastures and fertile soils that was chosen to play The Shire in The Lord of the Rings and The Hobbit films.

We strolled through the famous Hamilton Gardens which feature themed gardens from all around the world. 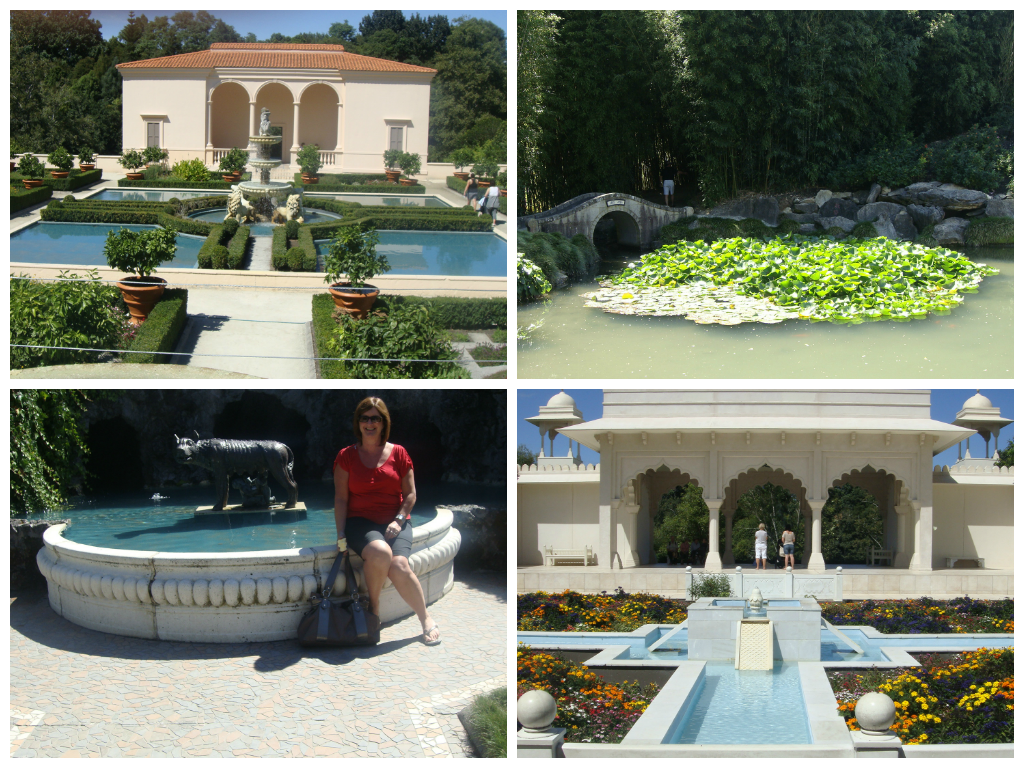 For those of you who have never considered travelling to New Zealand, think again. It really is a country of natural wonders, lush green vistas and pristine coastlines. The Land of the Long White Cloud doesn’t fall short when it comes to heart-stopping, jaw-dropping, eyeball-popping travel experiences.

Spread the love
AucklandBay of IslandsCoromandel PeninsulaNorth IslandRotoruaTravel New Zealand
By 50 Shades, October 13, 2014 Kathy was a 50 something year old when she started up this blog 6 years ago, but has since turned over another decade and is now in her early 60s. She is married with two adult children and lives on the Tweed Coast of New South Wales, Australia. Kathy enjoys living life to the fullest and loves to keep fit and active by maintaining a healthy diet and exercising regularly. Some of her interests include reading, photography, travelling, cooking and blogging! Kathy works part-time as a freelance writer but her real passion is travelling and photographing brilliant destinations both within Australia and overseas and writing about it.