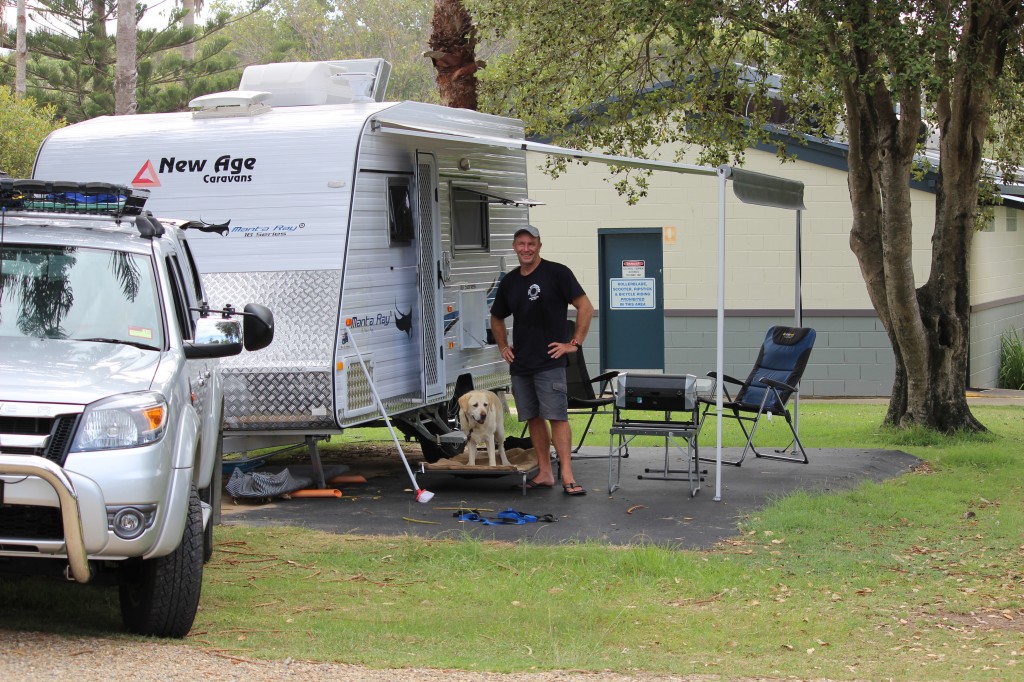 Since we have been on the road for four weeks now, I have observed the habits of the male of the species and their behaviour when it comes to camping. It’s comparable to watching a David Attenborough wildlife documentary really!

The alpha males tend to revert back to ‘cavemen-like’ behaviour by turning into a hunter and gatherer and attempts to provide food sources for his family. This includes lots of fishing (either with rod or spear), harvesting oysters off the rocks and wandering off into the meat aisle at the supermarket in search of the meat special of the day! 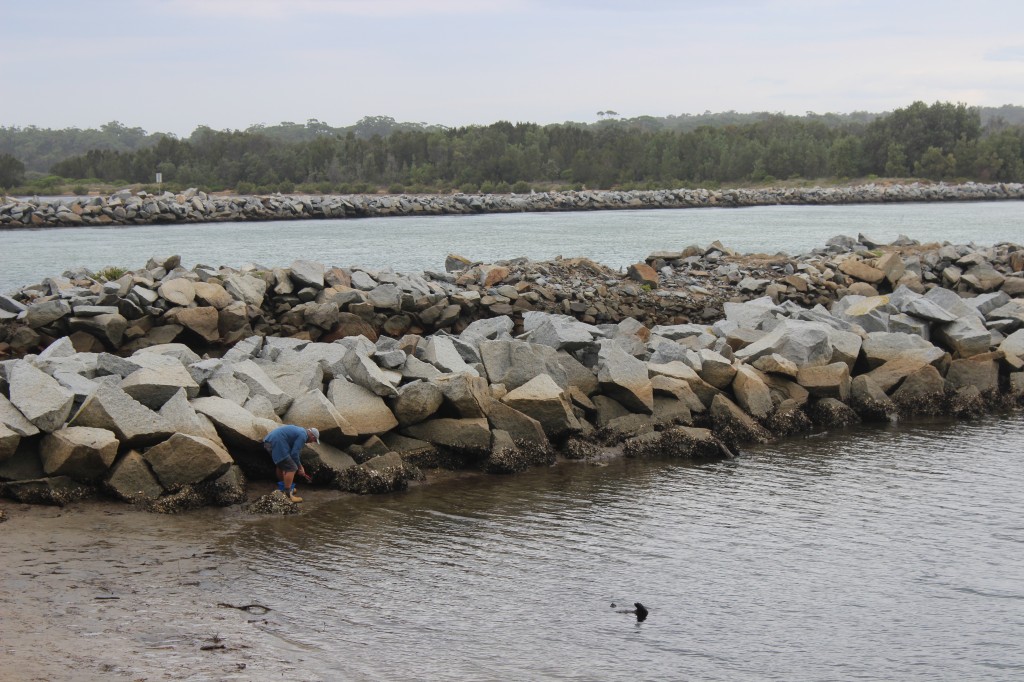 Open fires are very popular amongst the cave-men, (oops I mean alpha males!). They spend hours collecting firewood during the daylight hours and then once night falls they light their fires. Then they shove a side of beef or similar, on a spit over the fire and stand around with a stubby of beer in hand in a trance-like state watching the fire burn, (and sometimes the meat!)

Security and protection becomes paramount in their lives and they constantly ensure that everything is battened down by using a series of ropes and pegs. These ropes are checked and small adjustments are made numerous times during the day and night – just to make doubly sure! 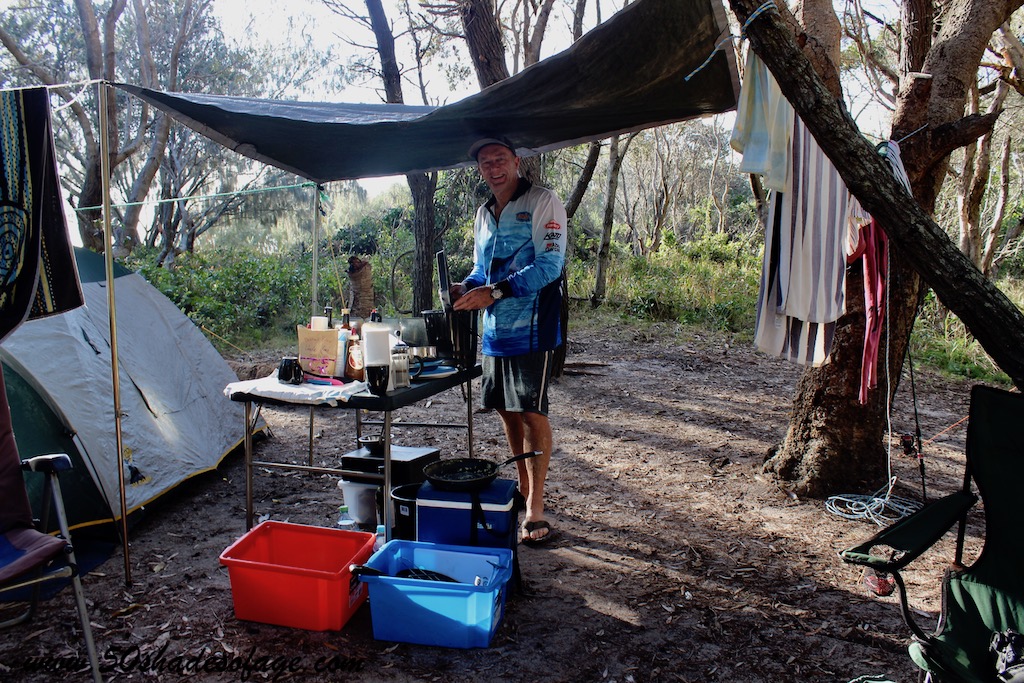 They also have a tarp (tarpaulin) for every application – one to be used as floor covering over the dirt area outside the caravan, one used as a screen for the afternoon sun or from sticky beak neighbours (there are masses of them!), and one huge tarp to provide extra protection from the elements covering the entire caravan and annex.

The alpha males love to congregate of an afternoon, with a beer stubby in hand, to discuss their days hunting adventures and what bait they used, the pros and cons of their four wheel drives and what fuel economy they get and most importantly how much they paid in camping fees. There are many know-it-alls amongst the fraternity that love to impart their vast knowledge of ‘grey nomading’ and get off on expressing an opinion on everything camping and caravanning related!

Meanwhile the female of the species generally lounge around on their reclining camp chairs in their comfy elasticized waisted pants, with a glass of ‘chardy’ in one hand and a Mills & Boon in the other. We like to keep a clean caravan (in case guests drop in for a sticky beak), which takes all of 10 minutes per day. We whip up gourmet one-dish dinners on our gas cooktops and organize the alpha males to whop a steak on the barbie, (“and don’t burn it love”!) 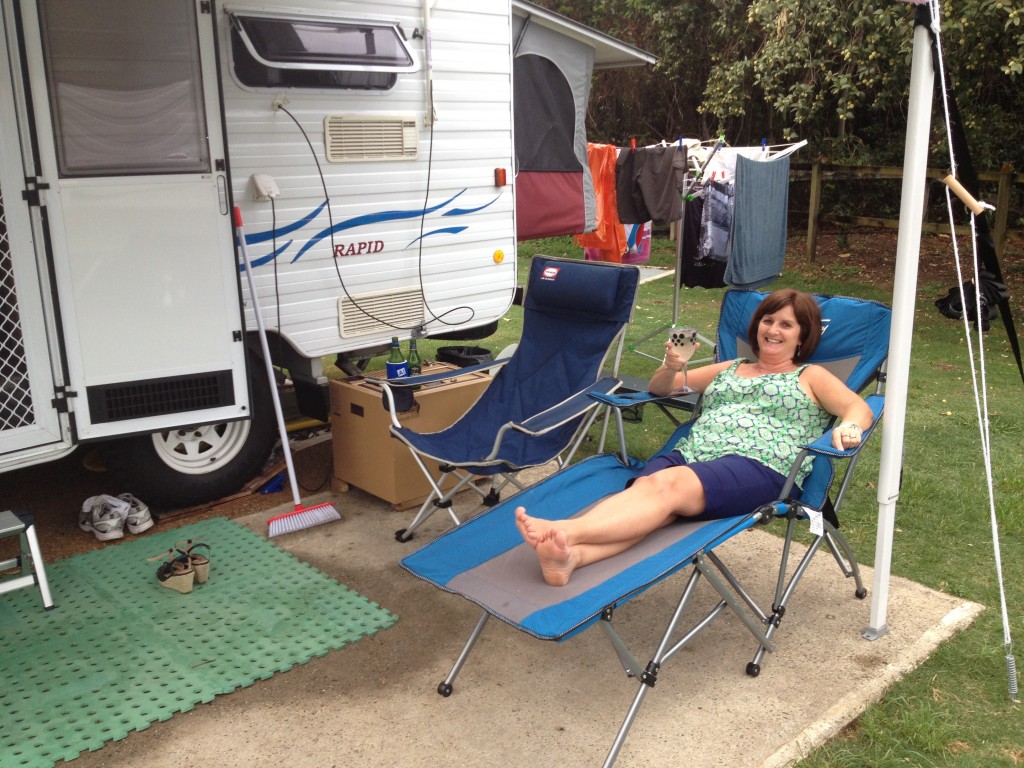 Occasionally we socialize with other females and compare features of our caravans and give one another handy tips on things like how to conserve water, where to buy that snazzy new caravan gadget and how to do the laundry whilst travelling. Riveting stuff really!

Water conservation is of the utmost importance when free camping, so the alpha males constantly monitors how much water you use while you are showering or washing up. He looks at the water tank gauge and shouts “we have only got a third of a tank left so go easy”. Same goes for the conservation of battery power!

Amongst the caravan fraternity there is a lingo and here are some of the commonly used expressions:

Oh the joys of camping and getting back to nature! I wouldn’t trade it for a million dollars….. Mmm maybe I would!

Spread the love
Campingcamping cavemencaravanningGrey Nomads
By 50 Shades, February 24, 2014 Kathy was a 50 something year old when she started up this blog 6 years ago, but has since turned over another decade and is now in her early 60s. She is married with two adult children and lives on the Tweed Coast of New South Wales, Australia. Kathy enjoys living life to the fullest and loves to keep fit and active by maintaining a healthy diet and exercising regularly. Some of her interests include reading, photography, travelling, cooking and blogging! Kathy works part-time as a freelance writer but her real passion is travelling and photographing brilliant destinations both within Australia and overseas and writing about it.