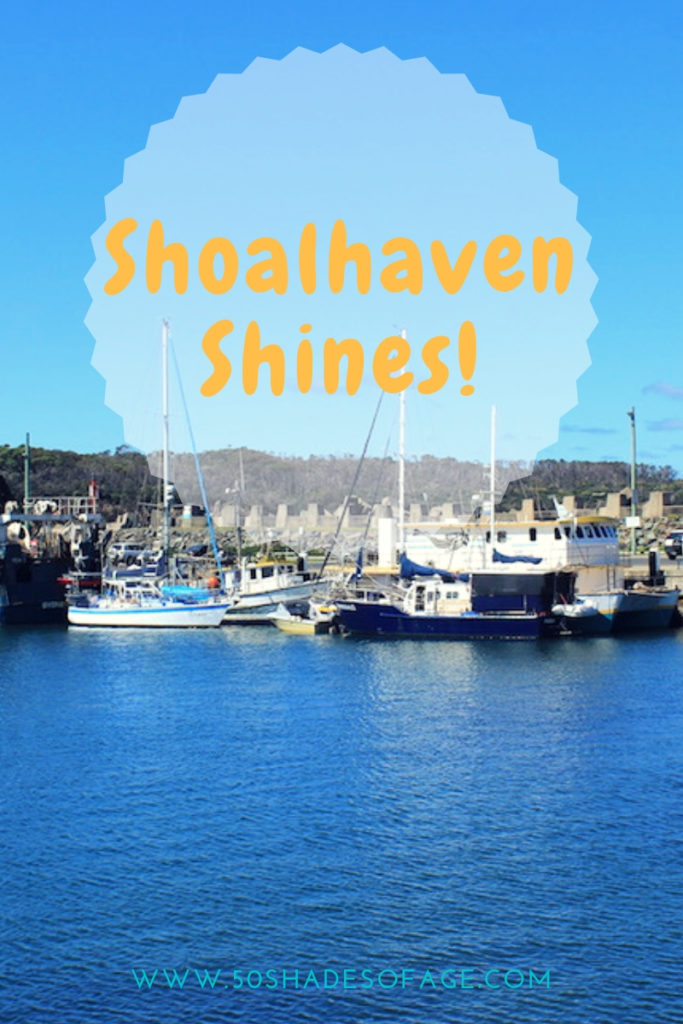 Amongst the many things to do in New South Wales, the magnificent Shoalhaven on the South Coast of NSW is a standout.  The region stretches from the town of Berry to the north and North Durras to the south, a distance of approximately 130 Kms. To say that the Shoalhaven Shines is an understatement!

It boasts a wide range of stunning natural attractions. As well as its magnificent beaches and waterways, the Shoalhaven is home to the famous and beautiful areas of Jervis Bay, the Kangaroo Valley, Ettrema Wilderness, Budawang Ranges and Morton National Park. Nowra is the largest coastal town on the NSW South Coast and the business and administrative ‘capital’ of the Shoalhaven.

Historic Berry, is nestled among rolling hills, and as we discovered one of those places where the drive is as pretty as the town. The country town exudes a lot of warmth and charm with many buildings with National Trust classification. 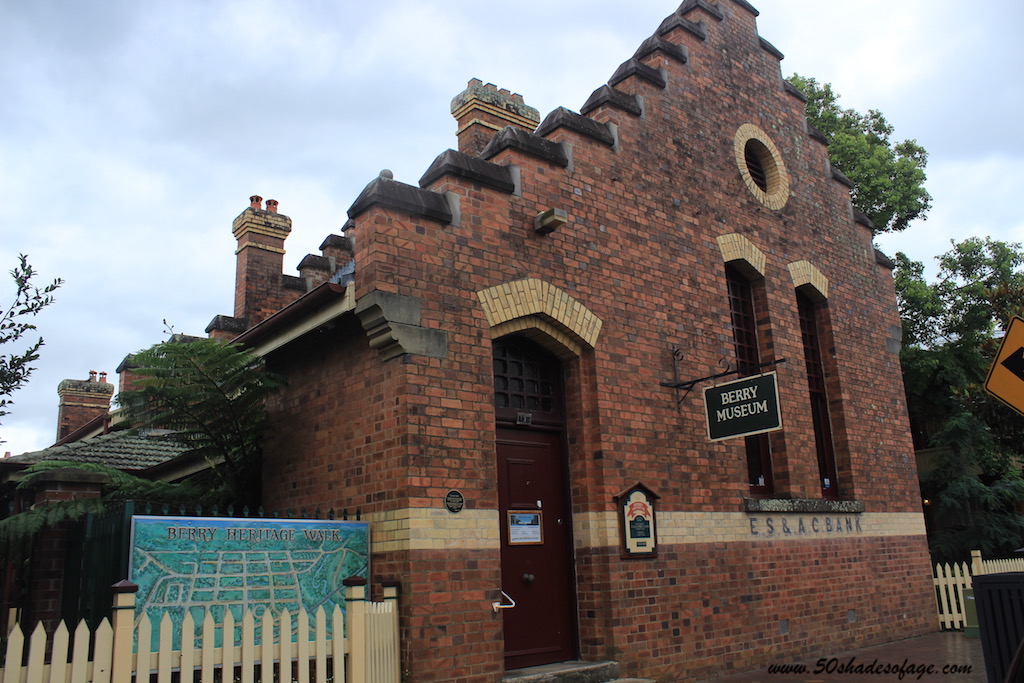 It is often described as the perfect country getaway and I can see why with a Pub that is adorned with Surf Boats on its roof, a black and white cow statue outside the general store, friendly locals and a veritable food bowl of fresh produce. 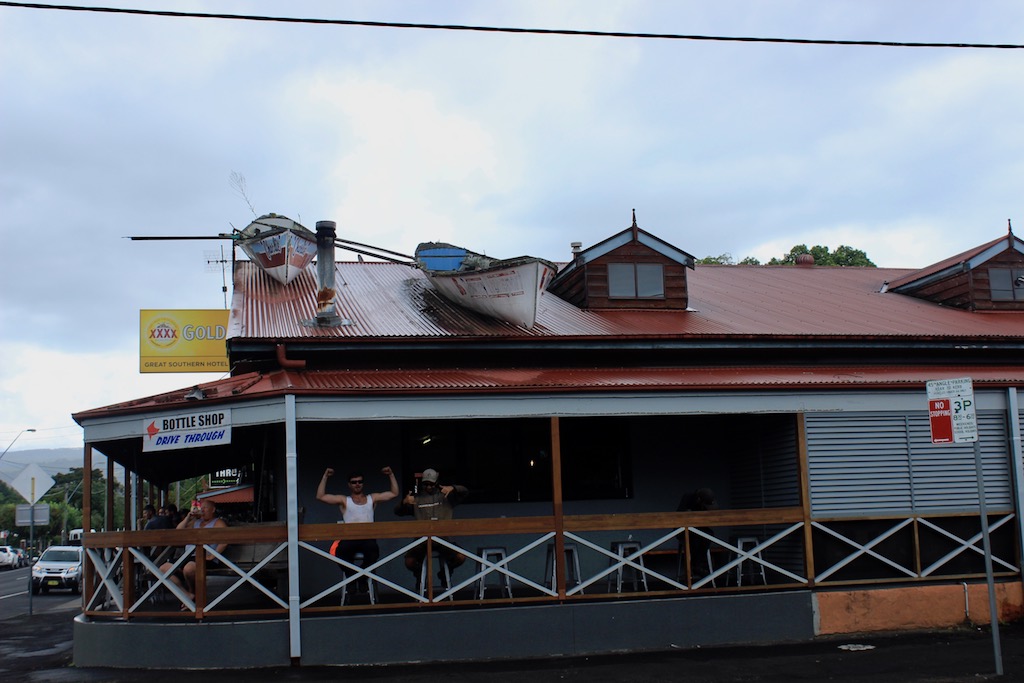 Inland from Berry, we took the drive to Kangaroo Valley via the narrow roads of the Berry Mountain pass, through lush green rainforests and glimpses of views into the valley beneath.

The village of Kangaroo Valley is right by the Kangaroo River with the famous Hampden Bridge, the oldest suspension bridge in Australia. After a stroll across the bridge and down along the river gorge, we gorged ourselves with Devonshire tea at one of the charming tea rooms in town. 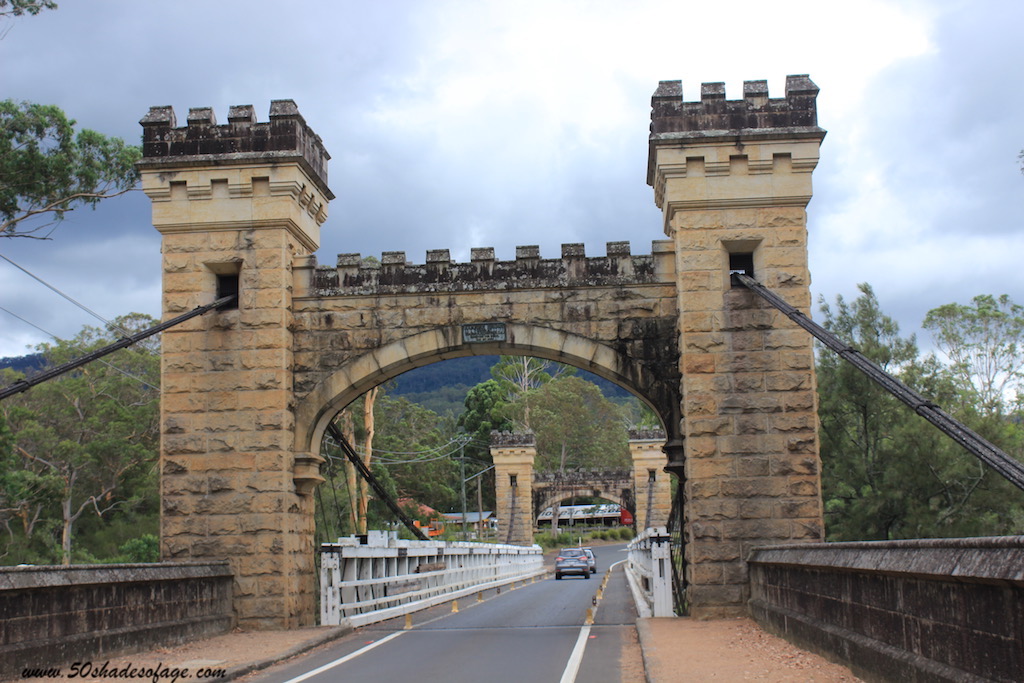 The region is a great place to kayak along the Kangaroo River, explore waterfalls, go bushwalking, see a variety of wildlife, taste delicious wines, visit the welcoming town pub and discover the colonial history at the Pioneer Village Museum. 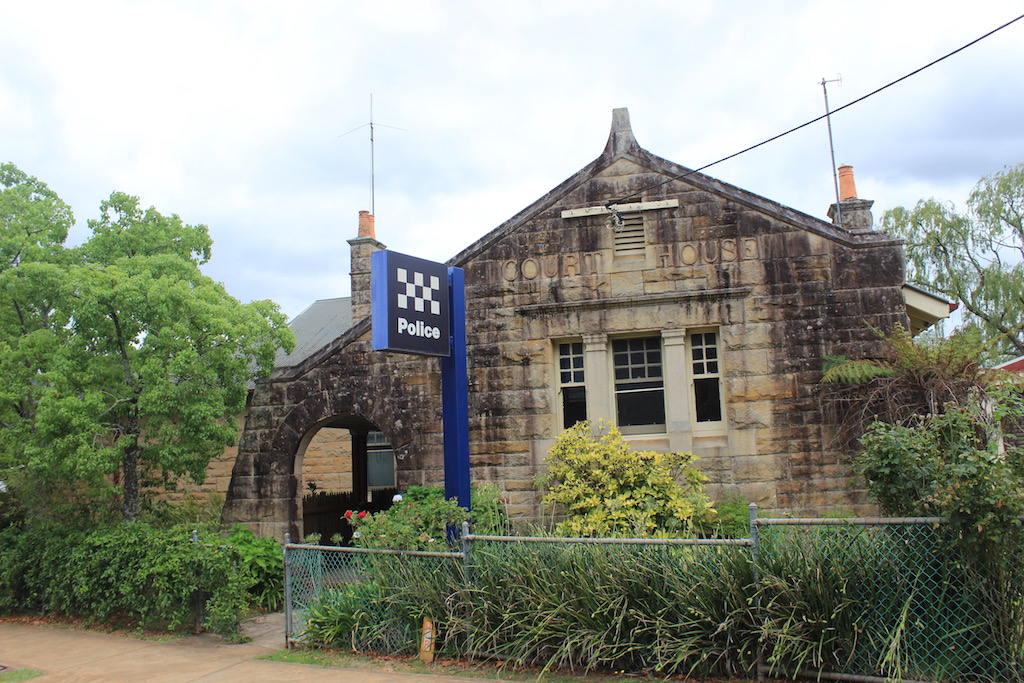 On the drive back from Kangaroo Valley we took a short detour to the Cambewarra Lookout where we witnessed the magnificent panorama of Shoalhaven City, stretching from Coolangatta Mountain in the north, way down to Pigeon House Mountain just inland from Ulladulla, in the south. The view also includes Point Perpendicular and the beautiful Jervis Bay National Park. 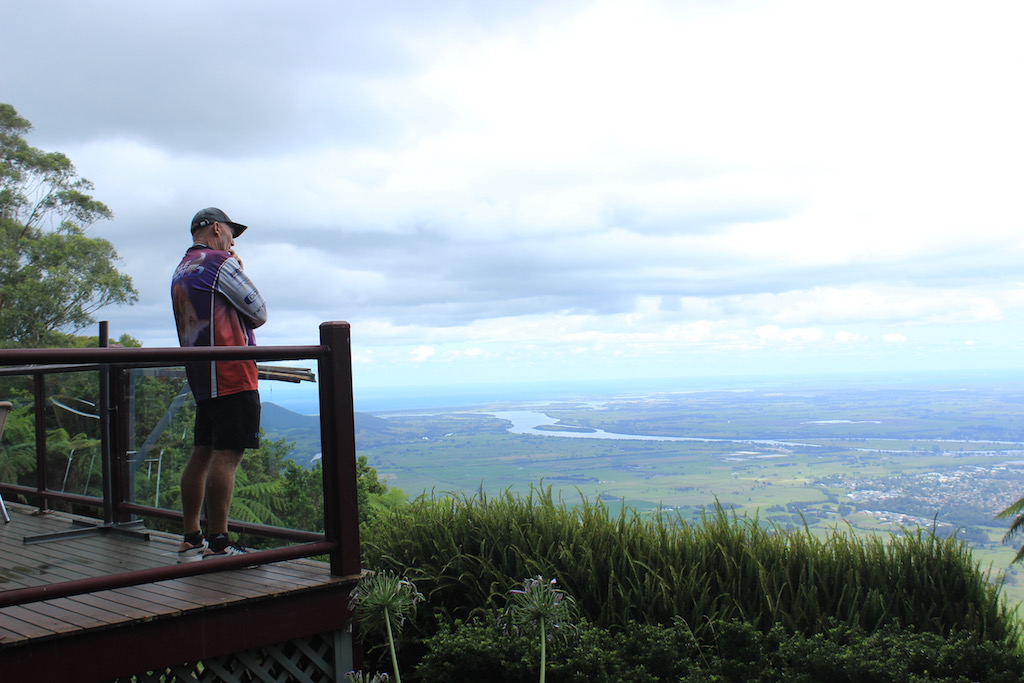 In the central Shoalhaven, Jervis Bay takes centre stage with a marine park full of dolphins, seals and little penguins.  During the winter months the humpback whales come to visit and frolic in the bay. There are gorgeous beaches with lovely protected swimming spots and rock pools, ideal for snorkelling, and bushwalking in the Booderee National Park. As far as natural attributes go, Jervis Bay really does have it all. 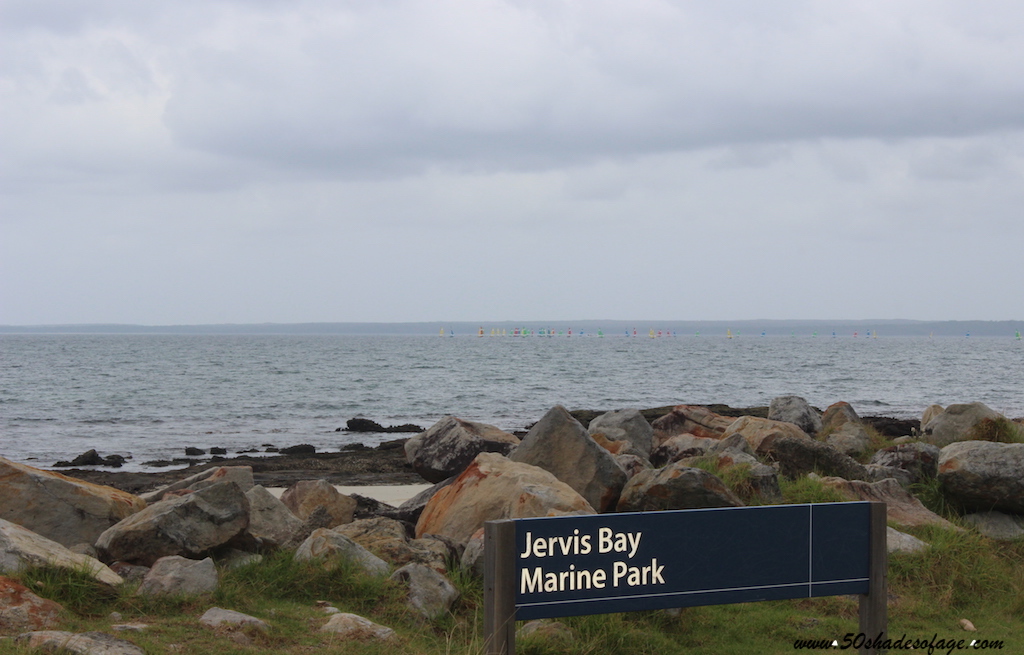 We camped at Jervis Bay Cabins & Camping campground on the Currambene Creek, just outside the town of Huskisson. 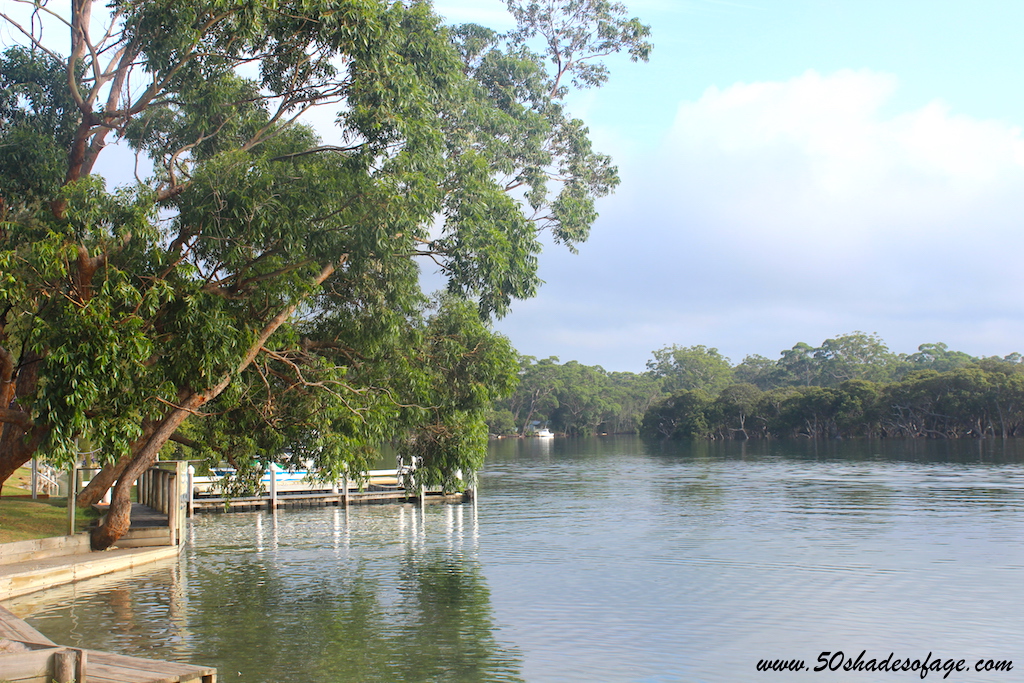 During our two night stay we visited the Jervis Bay Maritime Museum in Huskisson that consists of a number of buildings housing the Lady Denman Ferry, interesting maritime exhibitions and is surrounded by a boardwalk, ponds and gardens. 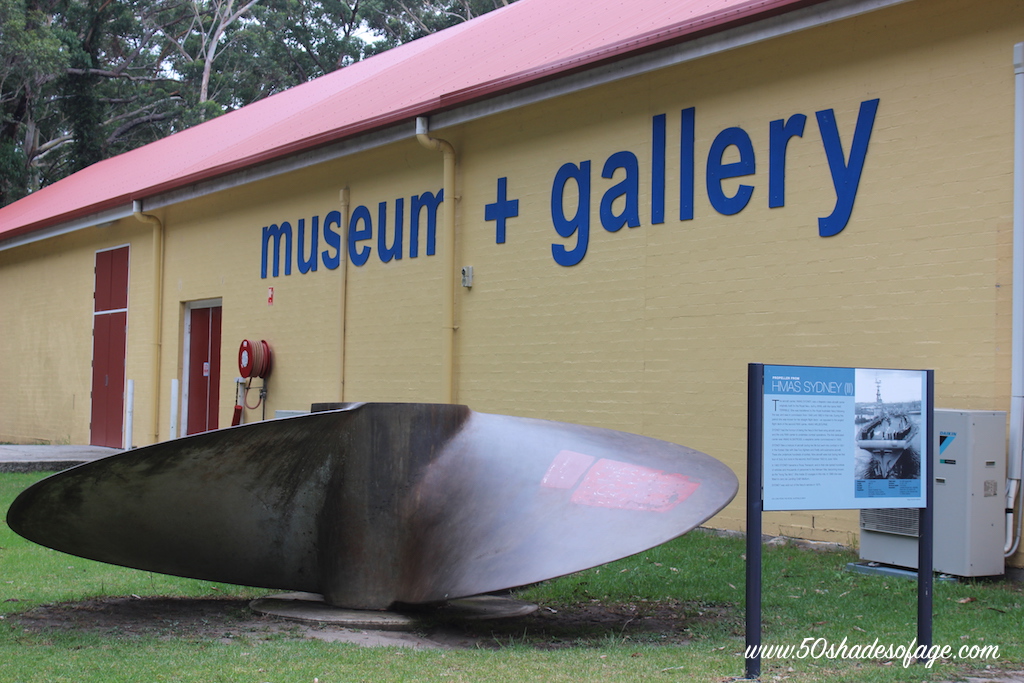 We noticed that the Hobie 16 World Championships were being conducted in the Bay, hosted by the Jervis Bay Yacht Club. Quiet a spectacle with their colourful sails out to sea. 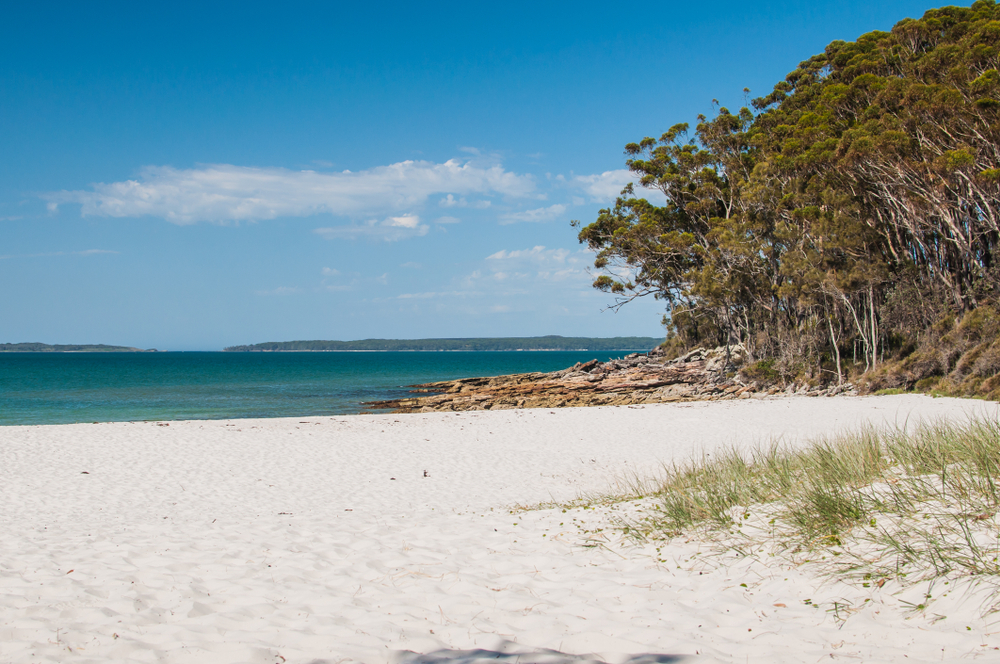 On the second day of our stay we drove further around the Bay to the pretty little village of Vincentia that is home to some of the best, and most accessible, beaches in Jervis Bay. Including Blenheim, Greenfields, Collingwood and Orion beaches, that fill the 6.5 Km strip along the Vincentia foreshore. 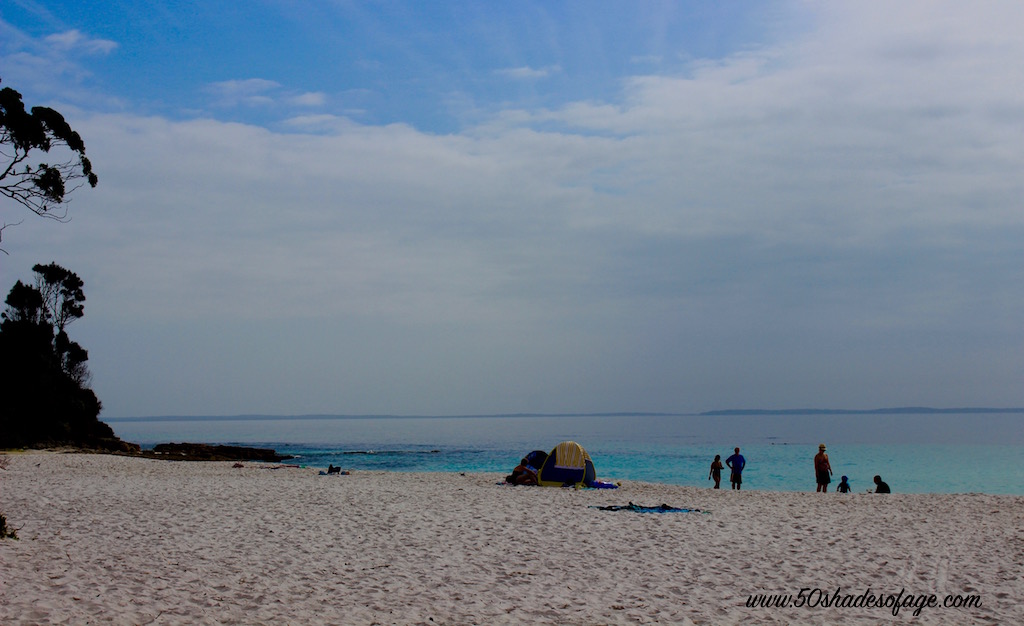 Further south on the Bay is the must see Hyams Beach. There are plenty of ways to enjoy this pristine beach that claims to have some of the whitest sand beaches in the world. Diving and snorkelling are very popular with Jervis Bay dive sites, widely regarded as being second only to the Great Barrier Reef. Surfing, sailing, windsurfing and sea kayaking are also popular in this idyllic marine park. 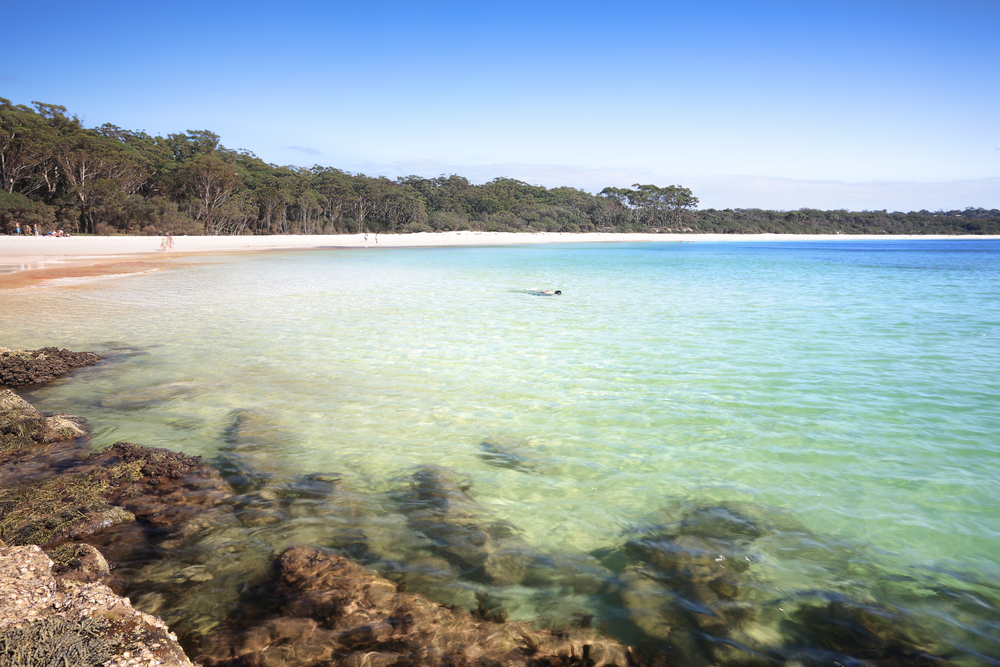 Snorkelling off the beach in Jervis Bay

On our departure day we visited St Georges Basin, a large shallow lagoon and one of the largest villages around the basin, just south of Jervis Bay. It is an ideal location for water activities such as boating, fishing and swimming. 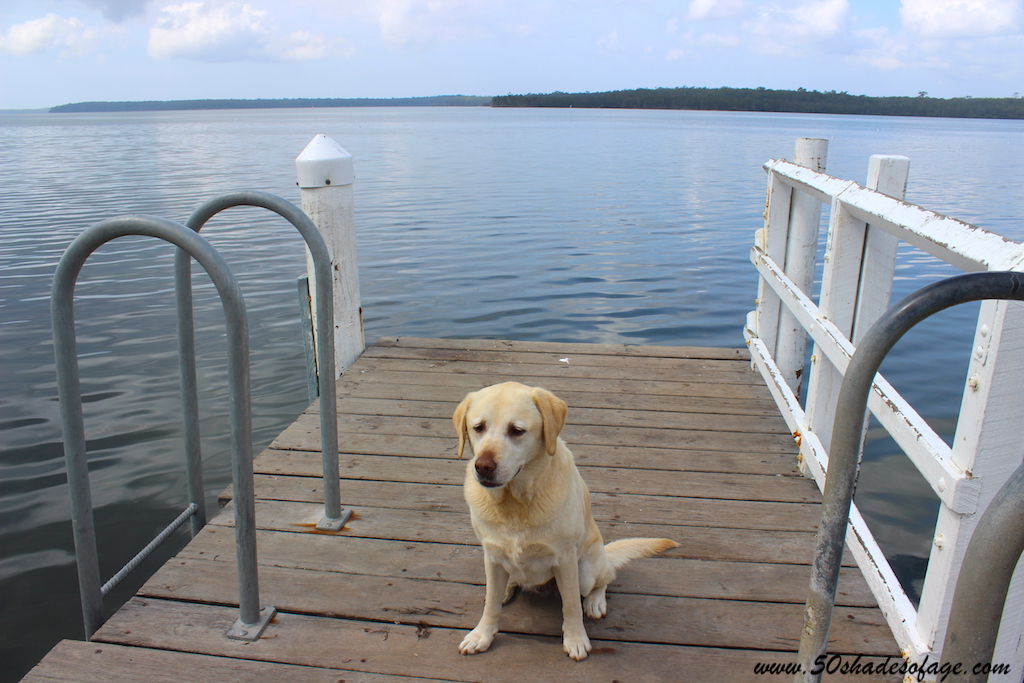 The southern Shoalhaven embraces lush farming lands around Milton and numerous beautiful beaches ranging from Bendalong down to Durras North. There are also four lakes in the area to explore: Conjola, Burrill, Tabourie and Durras South. 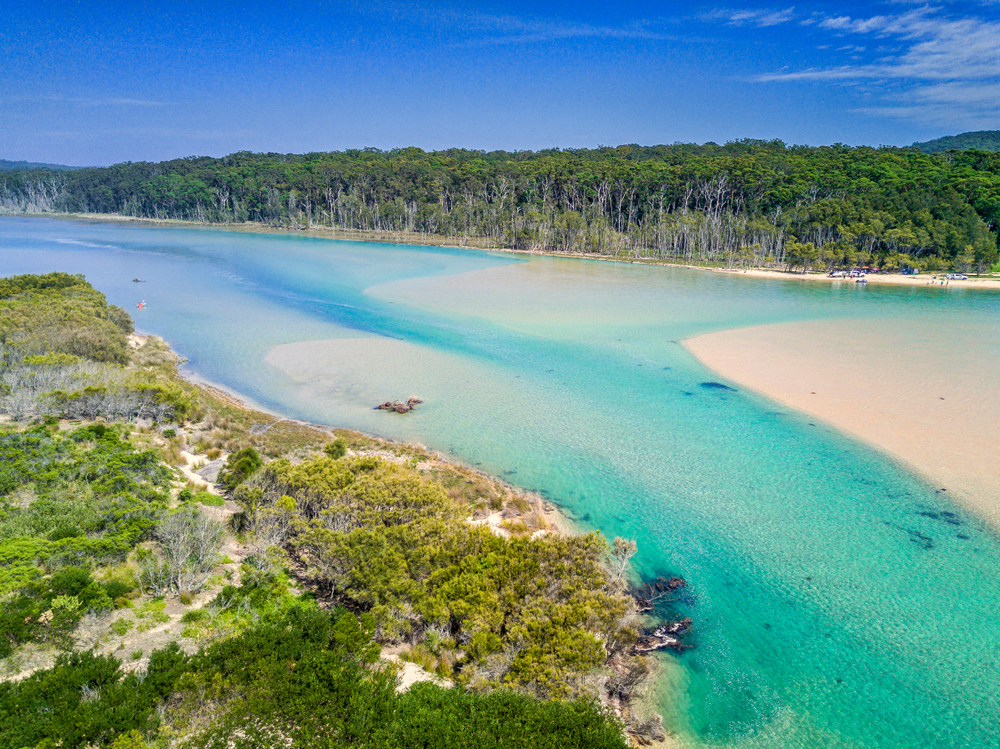 Pebbly Beach at Bawley Point is known widely as the home of the ‘surfing kangaroos’. Although they most probably won’t be surfing when you visit, you will find a large resident kangaroo population at Pebbly Beach quite happy to be patted or to pose for a photograph. 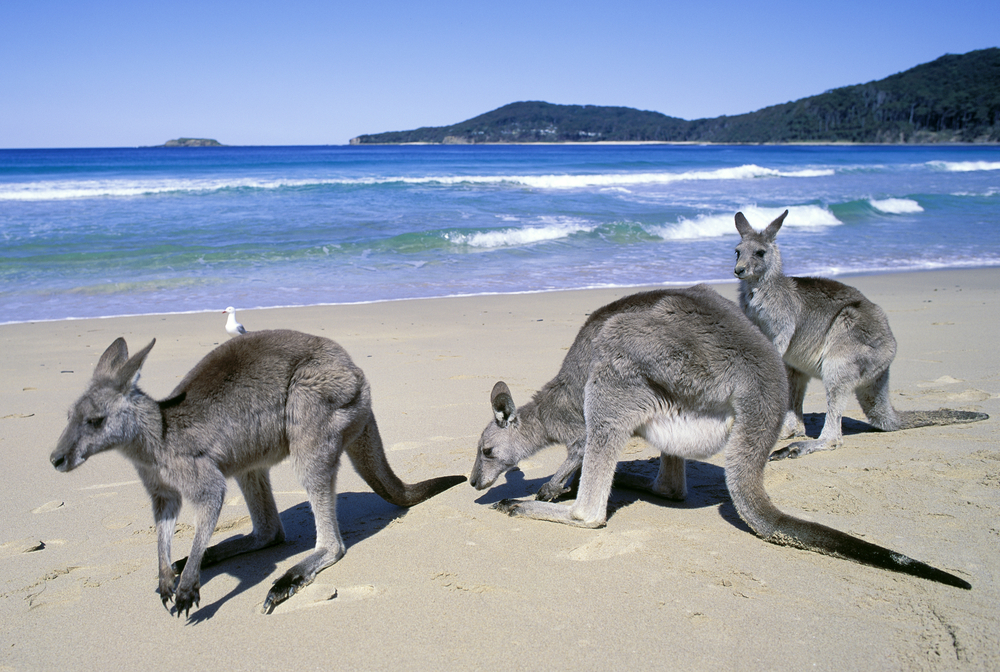 From our accommodation in Ulladulla we found it was a great central location to explore the surrounding lakes of Lake Conjola to the north and Lake Burrill to the south. 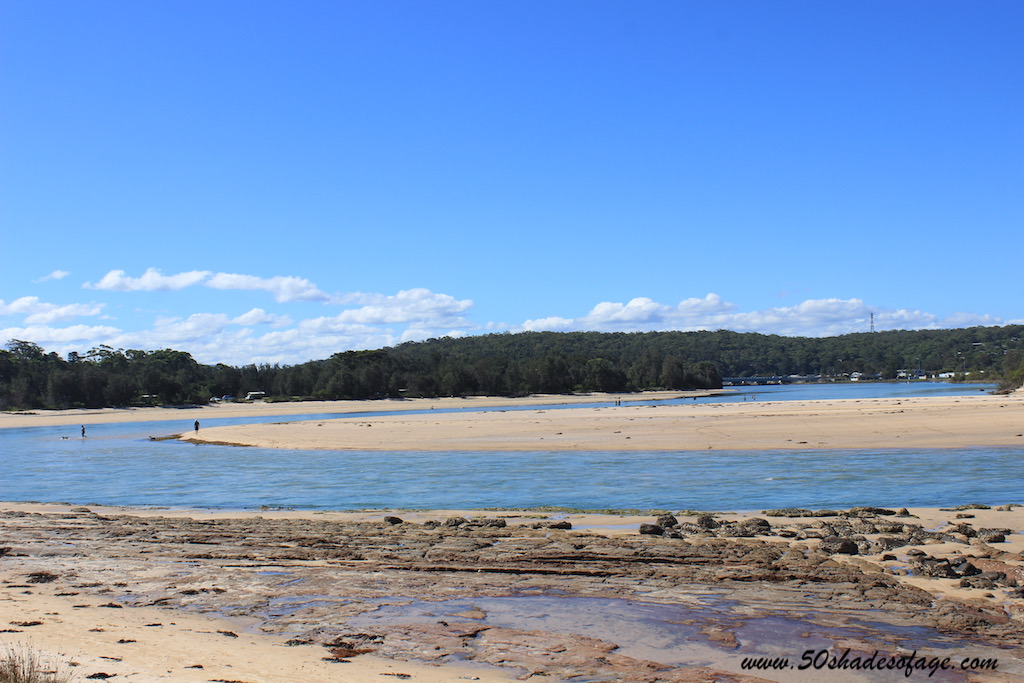 Adjacent to Ulladulla is the coastal village of Mollymook with it’s fabulous 2 Km stretch of golden sanded beach between Bannister Point and the southern headland where Mollymook Golf Club is located. 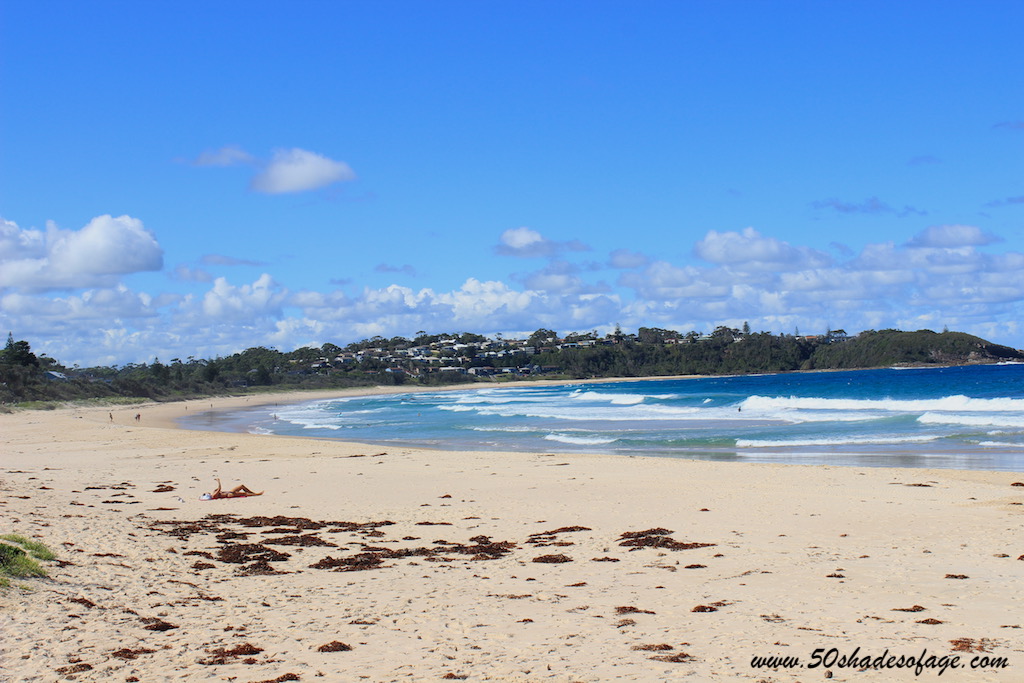 It’s a fabulous walk along the beachfront and afterwards you can cool off with a swim in front of the Mollymook Surf Club and enjoy a coffee at the cafe. 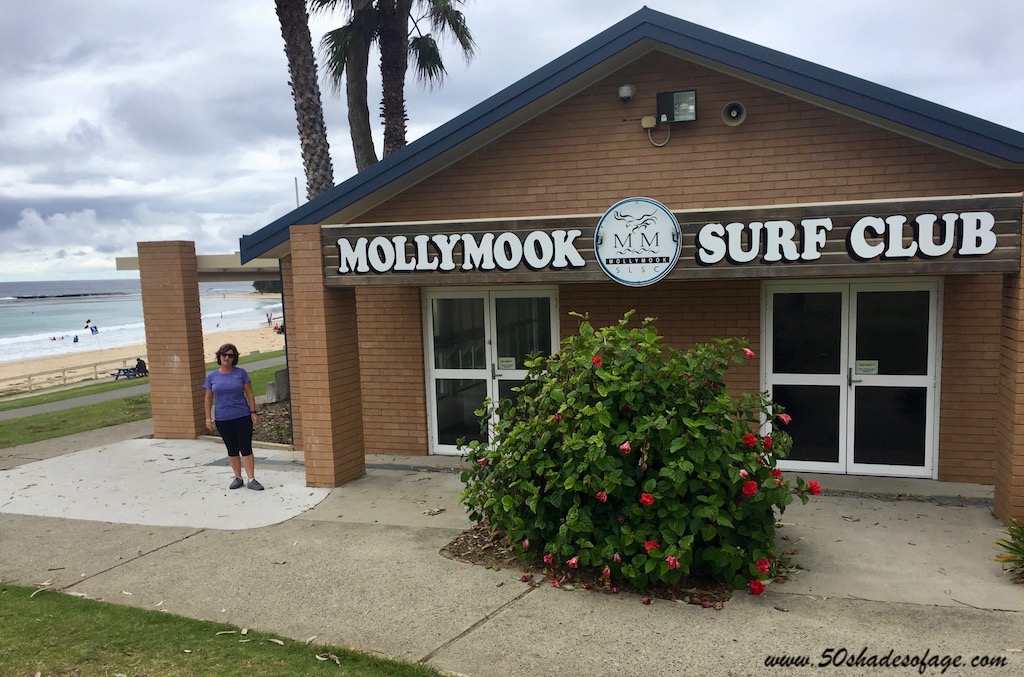 There are also a couple of other beaches worth checking out in Ulladulla: Rennies Beach near Warden Head and Racecourse Beach a little further south. 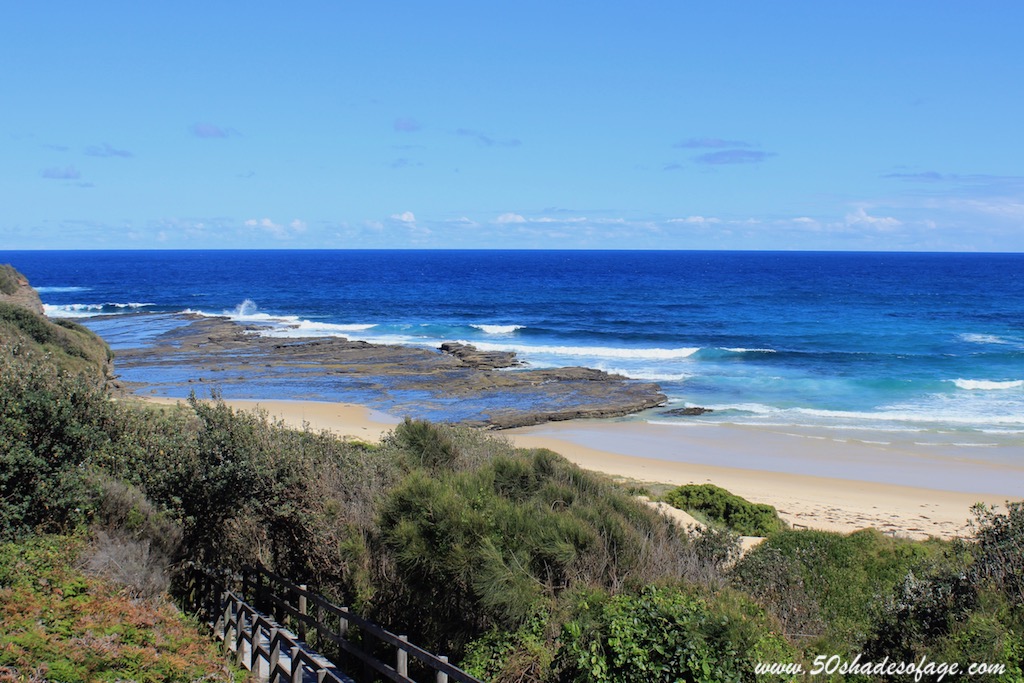 For food and wine lovers, Cupitt’s Winery located in the hills just west of town, is incredible with views to die for. We treated ourselves to a lunch feast of 3 courses all accompanied with the Estate’s own wines. It was my birthday so I deserved to be spoiled! 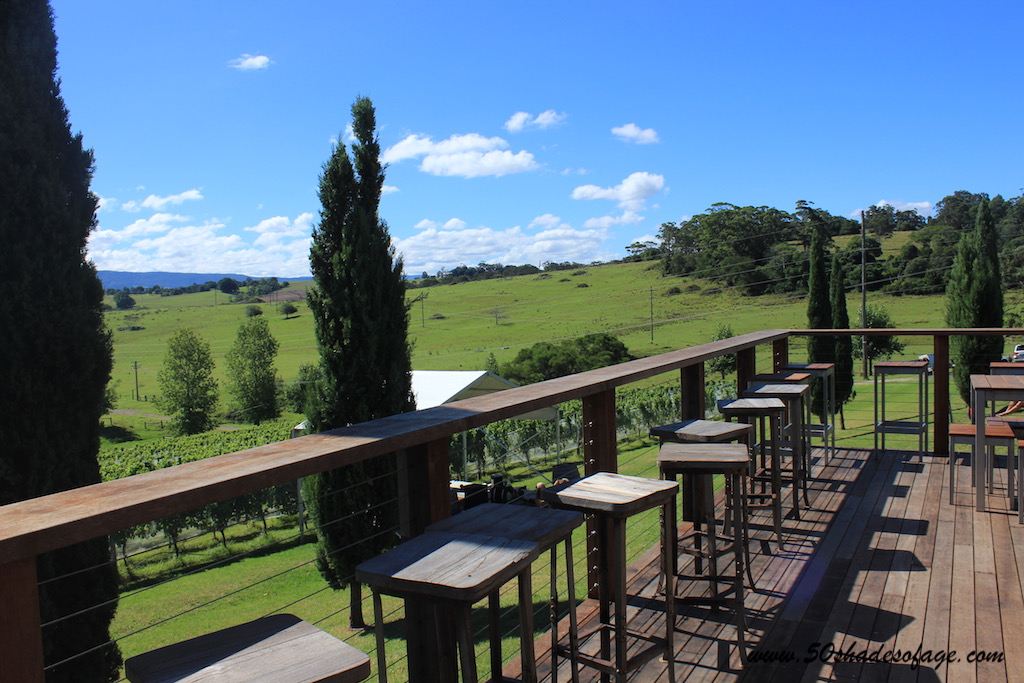 The view from Cupitt’s Winery

We also visited Warden Head Lighthouse at Ulladulla to take in the sensational views. There are extensive rock pools at the bottom of the lighthouse where my husband tried his hand at snorkelling and spearfishing. However he had no luck so we had to settle for eating fish and chips fresh from the Fishermen’s Co-op on the wharf at Ulladulla Harbour! 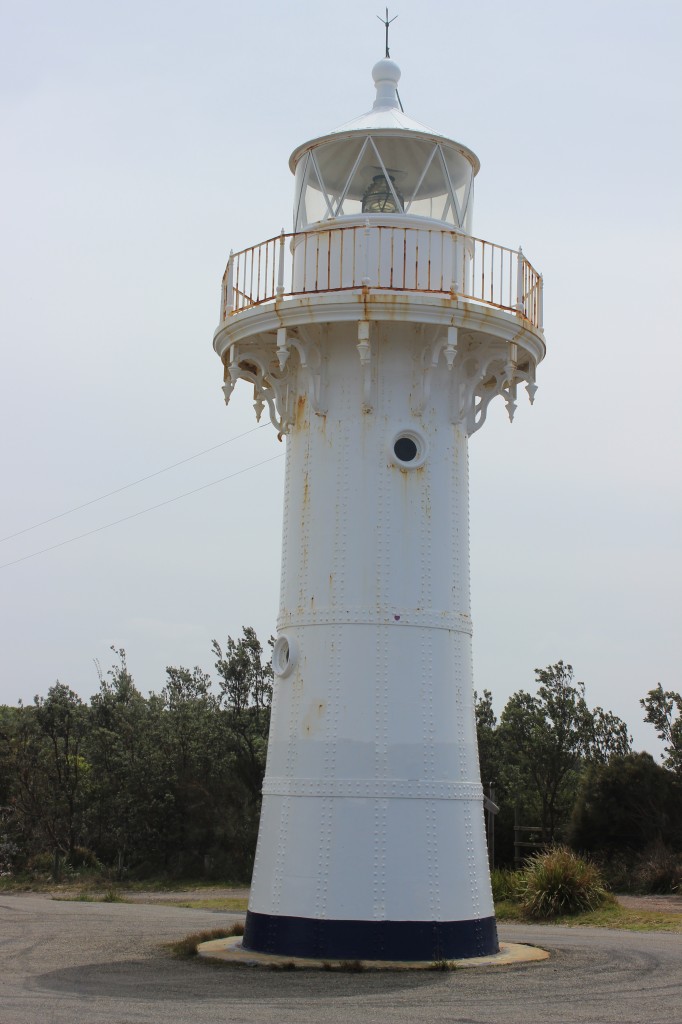 A short distance away is the National Trust listed town of Milton set on a ridge between green valleys and the Great Dividing Range. To the west, the landscape is dominated by the rock spire of Pigeon House Mountain, one of the most striking features of Morton National Park. 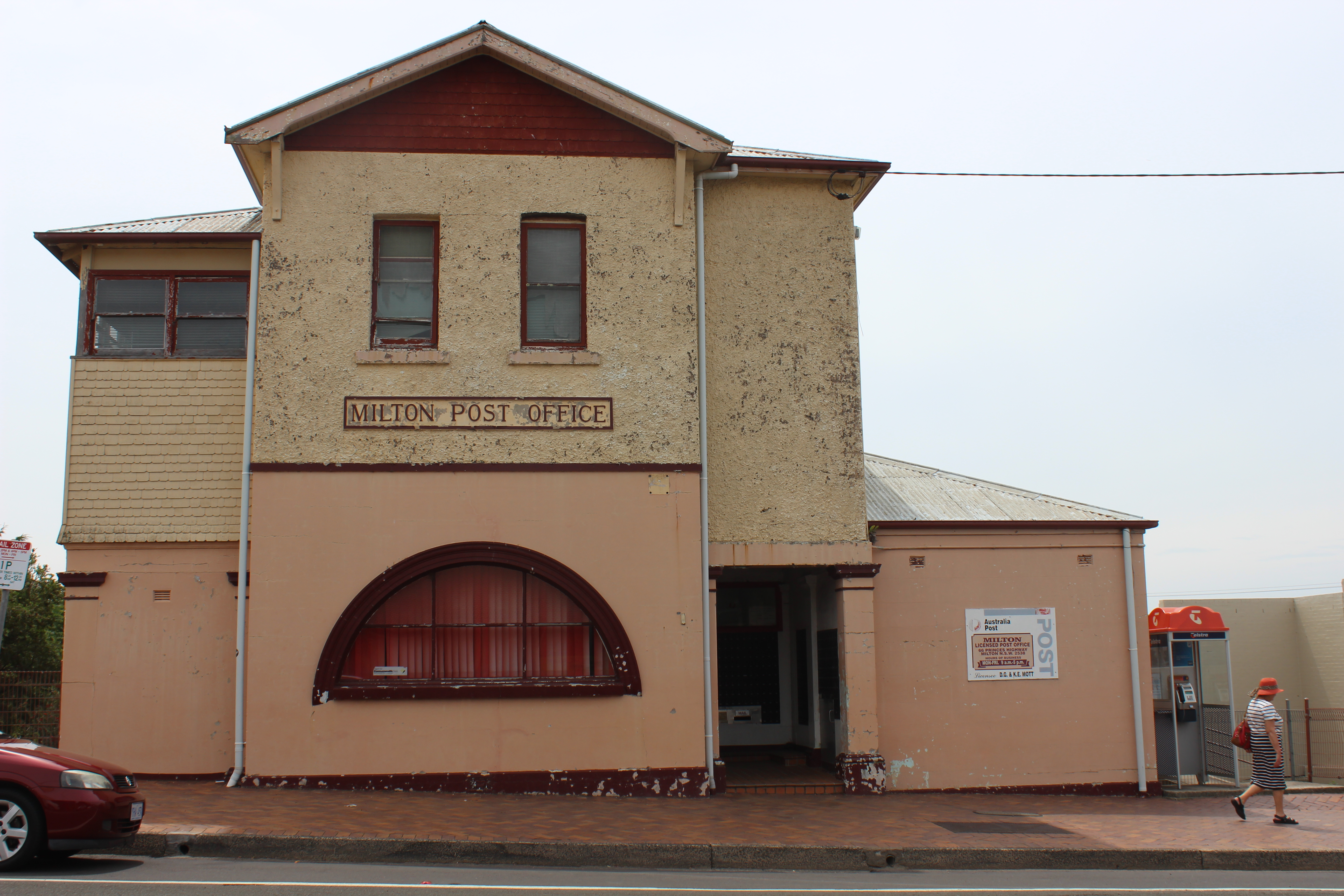 Milton historic town is worth a visit with a delightful range of colourful shops, old buildings, fascinating galleries and lively food places. 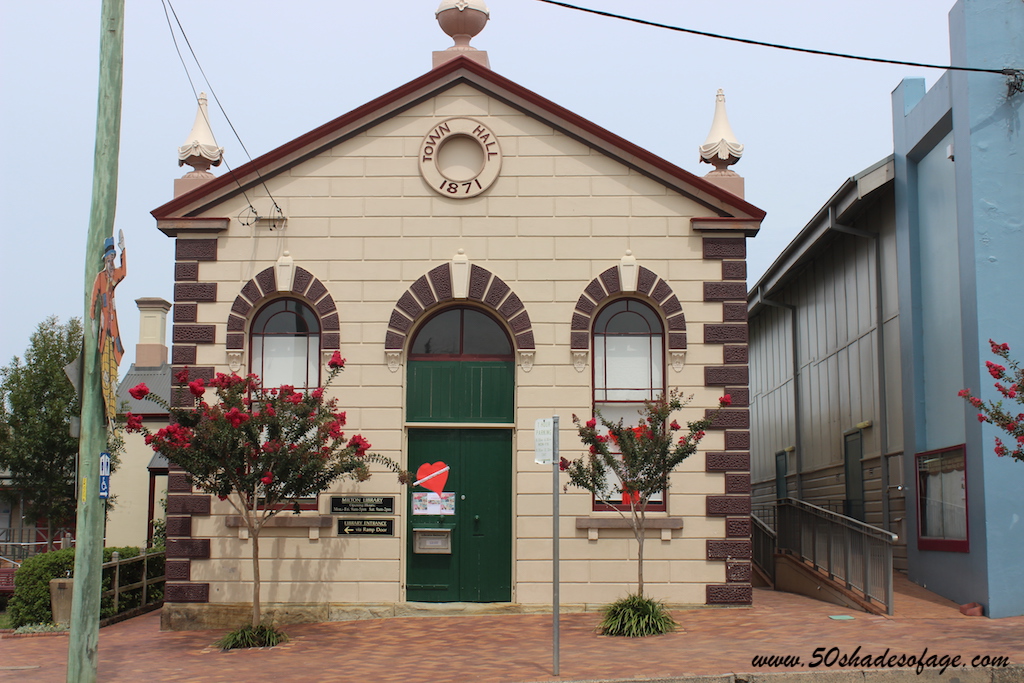 As one of the locals said to me, when I remarked on the beauty of the Shoalhaven, “Shush, don’t tell anyone about this place, we like to keep it all to ourselves”. As if this is going to happen!

Spread the love
Jervis BayShoalhavenSouth Coast NSWTravel South CoastUlladulla
By 50 Shades, October 15, 2018 Kathy was a 50 something year old when she started up this blog 6 years ago, but has since turned over another decade and is now in her early 60s. She is married with two adult children and lives on the Tweed Coast of New South Wales, Australia. Kathy enjoys living life to the fullest and loves to keep fit and active by maintaining a healthy diet and exercising regularly. Some of her interests include reading, photography, travelling, cooking and blogging! Kathy works part-time as a freelance writer but her real passion is travelling and photographing brilliant destinations both within Australia and overseas and writing about it.