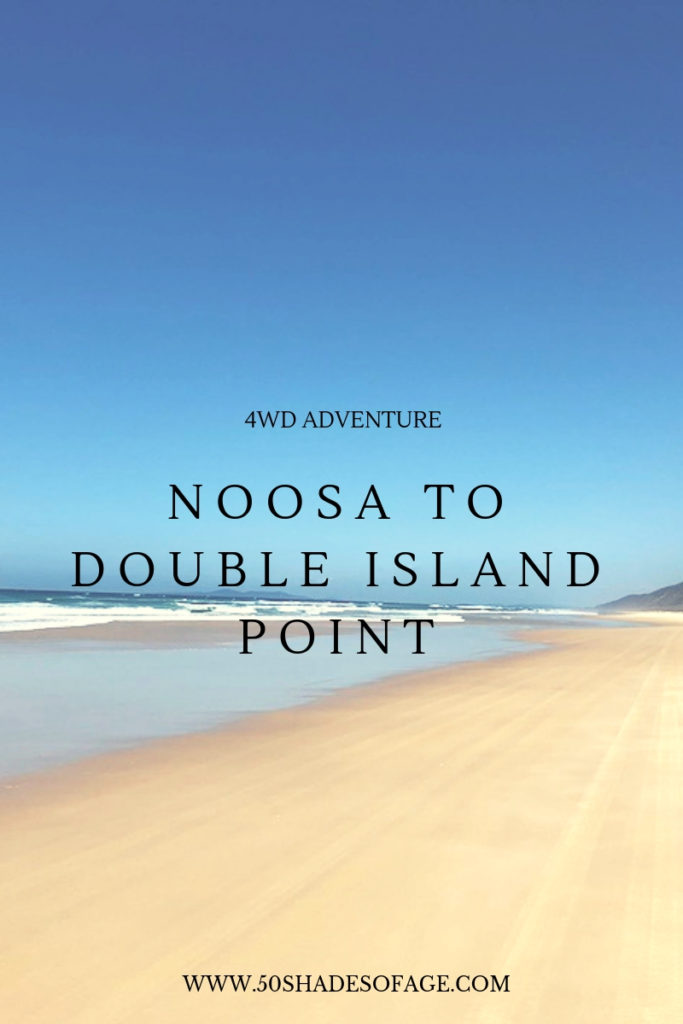 I’ve been to the popular Sunshine Coast resort town of Noosa Heads on numerous occasions, but never ventured to the North Shore of Noosa or on the beach drive from Noosa to Double Island Point. So I was excited when friends of ours invited us along on a 4WD adventure camping in the Cooloola Recreation Park right on the beautiful and pristine Teewah Beach.

Cooloola Recreation Park, or Great Sandy National Park, is located north of Noosa and covers the region right up to Rainbow Beach. It’s known as the “Great Beach Drive” and is a distance of 65 kms to Double Island Point, and a further 13kms to Rainbow Beach. 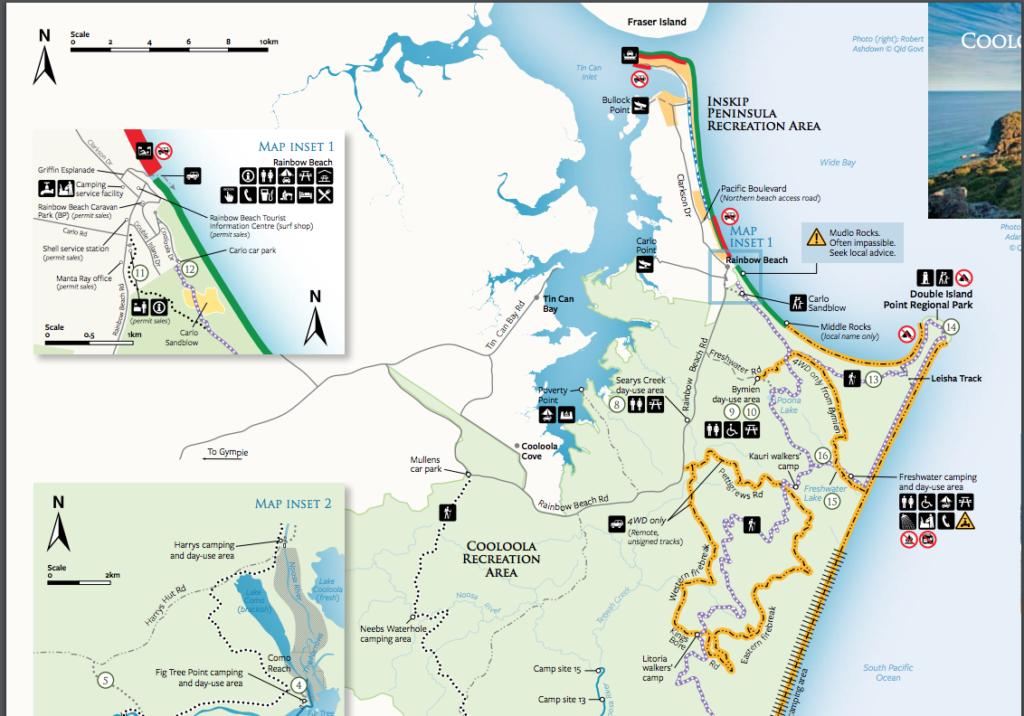 However if the beach highway gets a little busy, you can always head inland to a series of four-wheel drive tracks across 61,750 ha of variety—beaches, sandblows, rivers, open heath plains and forests.

How to get to Cooloola Recreation Park 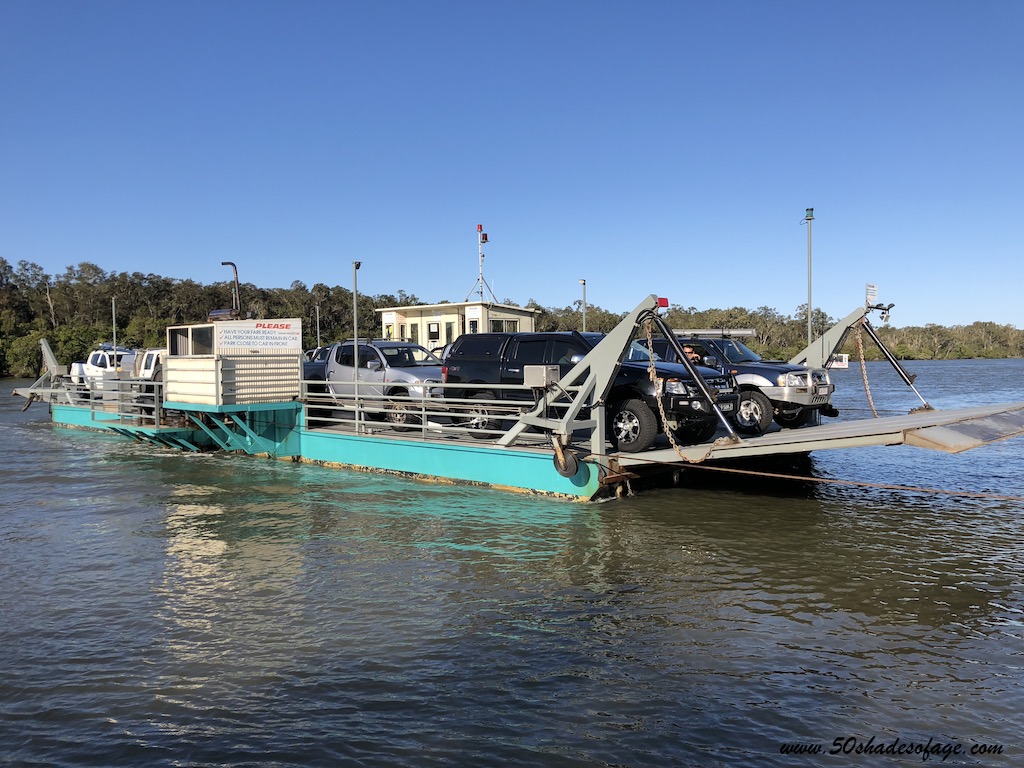 The Great Beach Drive begins with a short vehicular ferry crossing over the Noosa River at Tewantin. However before you proceed to the ferry there are few things you need to do first:

Once you have your permits you can board the ferry that goes back and forwards across the river, where you pay $7 per vehicle to cross.

After you’ve crossed the Noosa River you reach the North Shore of Noosa and soon after you’ll drive through the small township of Teewah, where you can stock up on supplies at the general store or even enjoy a drink or meal at the pub. 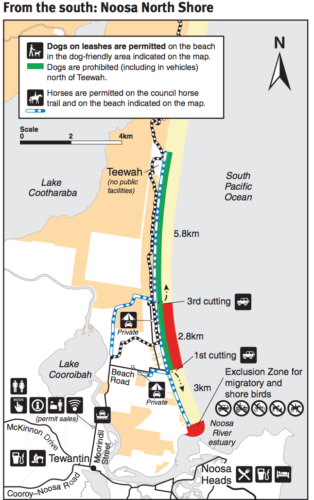 At the 1st cutting you’re able to access Noosa North Shore and River Estuary, which is worth checking out. Then backtrack to the sealed road for a distance of 2.8km to the 3rd cutting. 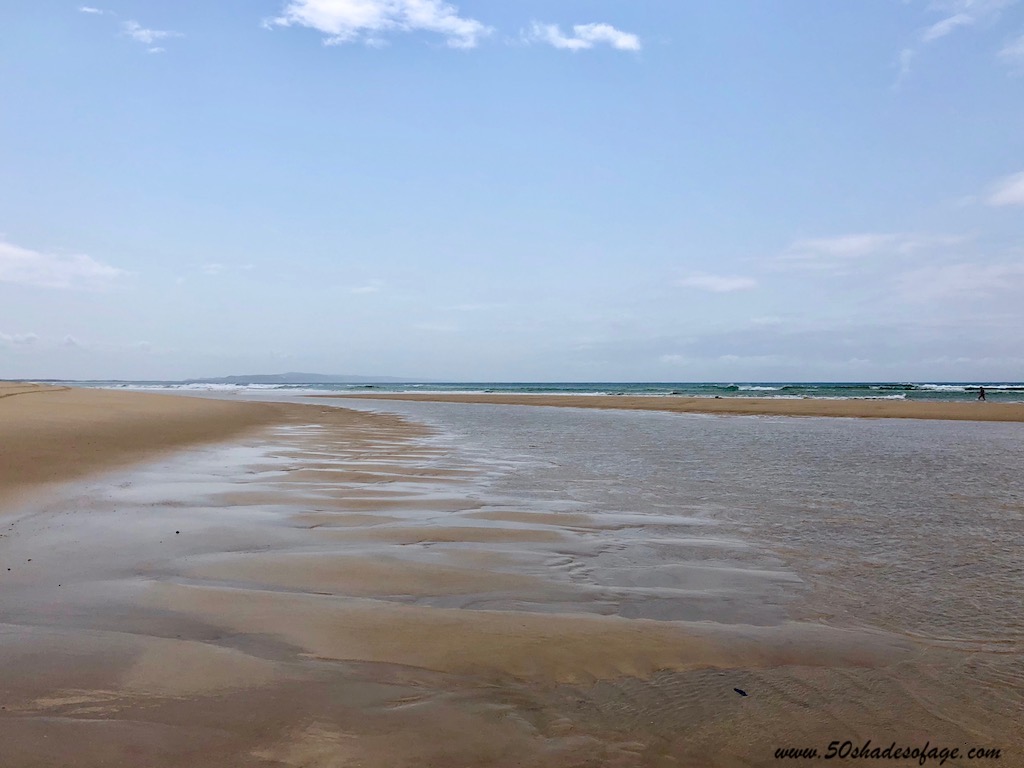 Tip: Make sure you let the tyre pressure down on your tyres before entering the soft sand on the beach. Refer to your vehicle’s manual for tyre pressures. 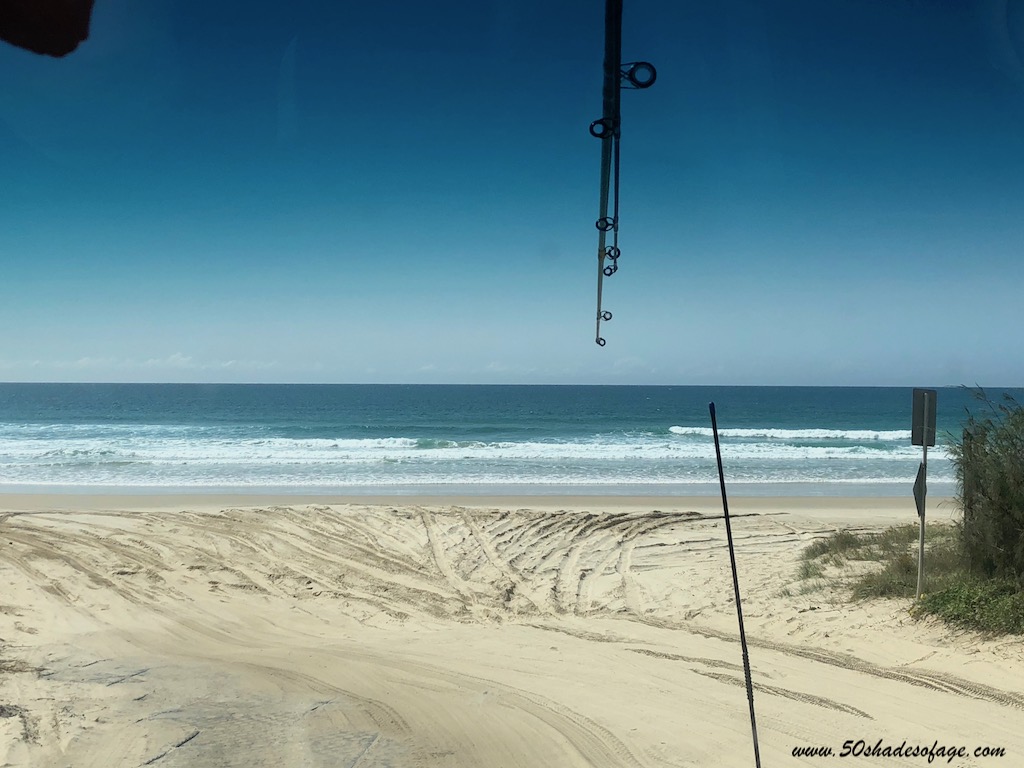 Once you access Teewah Beach the fun begins! Initially you will be blown away by the large flat stretch of sandy beach before your eyes and then as you proceed further along the beach you will drive past towering coastal sand cliffs and coloured sands. 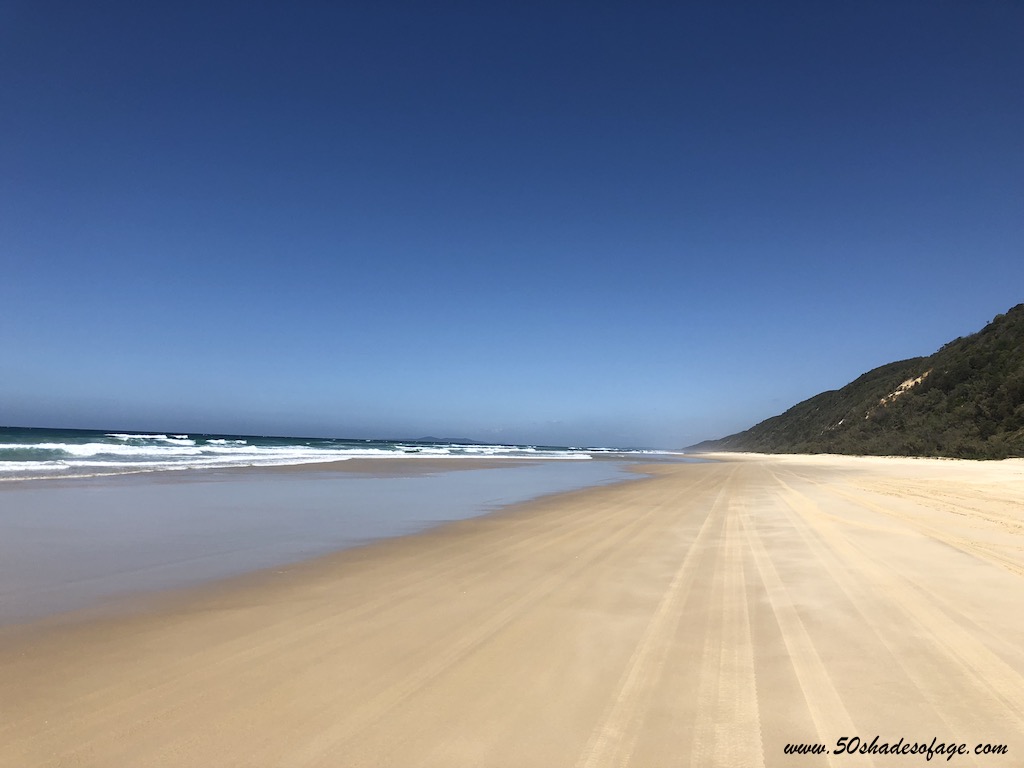 As we drove along the beach we saw many campsites set up amongst the protection of the sand dunes. There were even caravans and camper trailers set up with families and friends camping together. Fishing straight off the beach is also a very popular past-time and we saw loads of fisherman with their long surf poles casting into the open ocean. 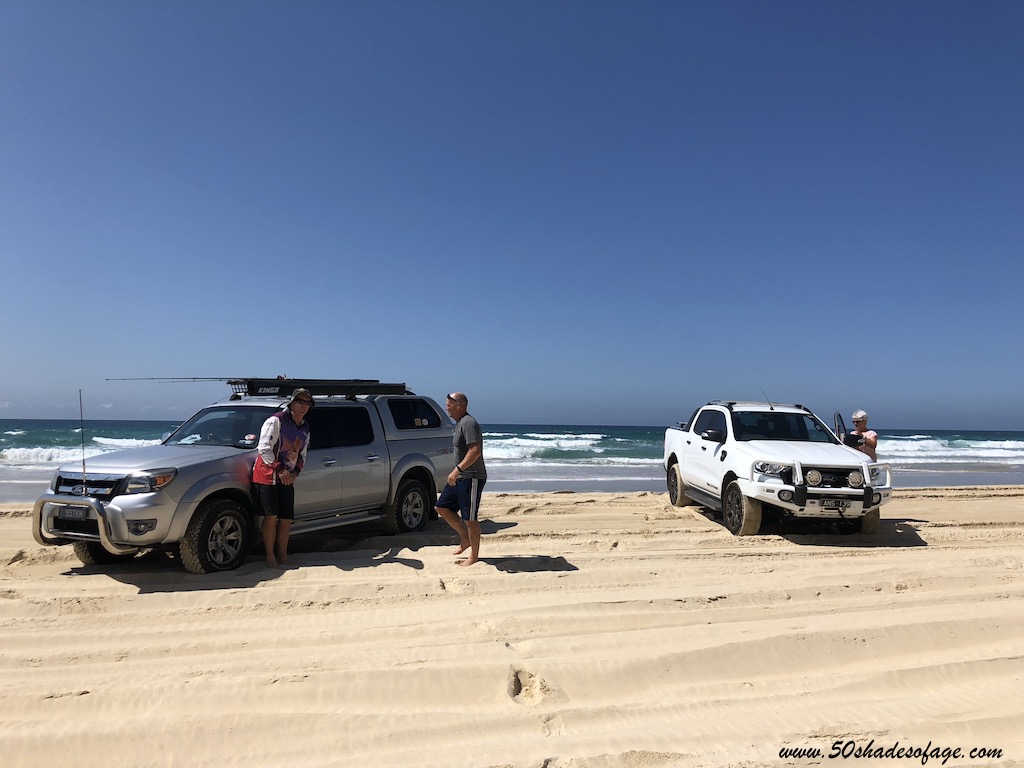 After we’d driven around 10 kms we stopped and hiked into a sandy gorge, just off the beach, where we experienced firsthand the magnificence of the coastal sand cliffs and the variations of the colours of the sand – ranging from red, orange, ochre to white. 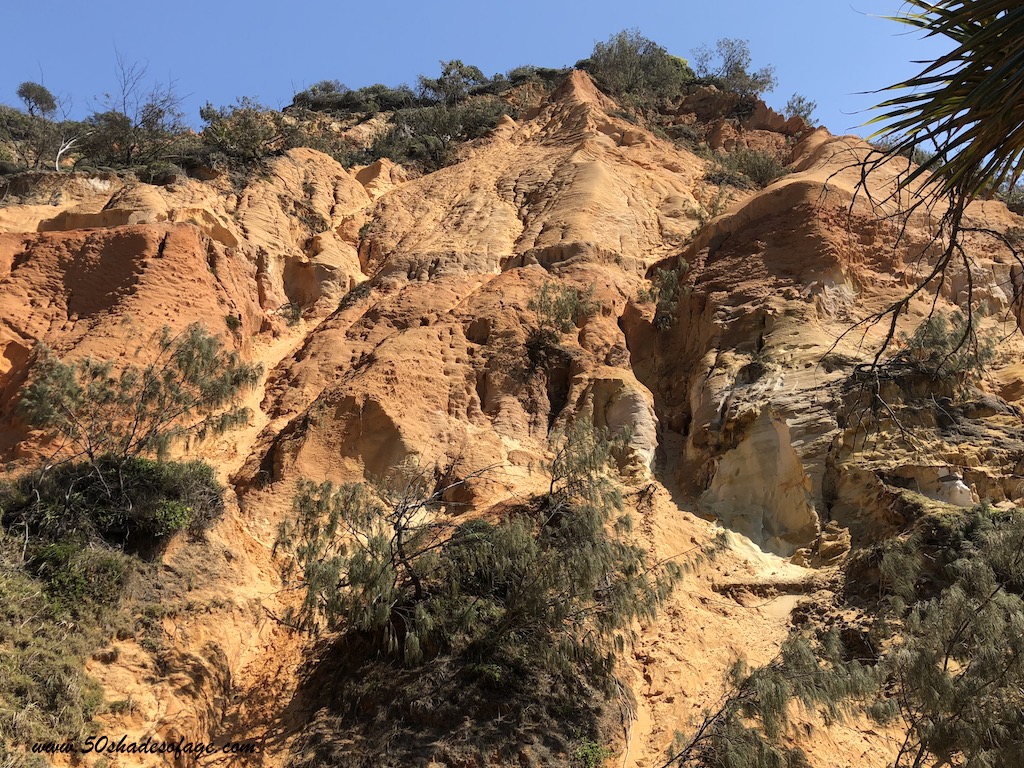 Colourful Coastal Cliffs in the Gorge

Prior to reaching Double Island Point, we veered inland on the Freshwater Lake road into a park, picnic area, toilets and camping area. We initially were going to set up camp in here, but made the decision that we’d prefer to camp alongside Teewah Beach. However, whilst we were here we decided to take the Freshwater Lake loop hike, a distance of around 5km return. 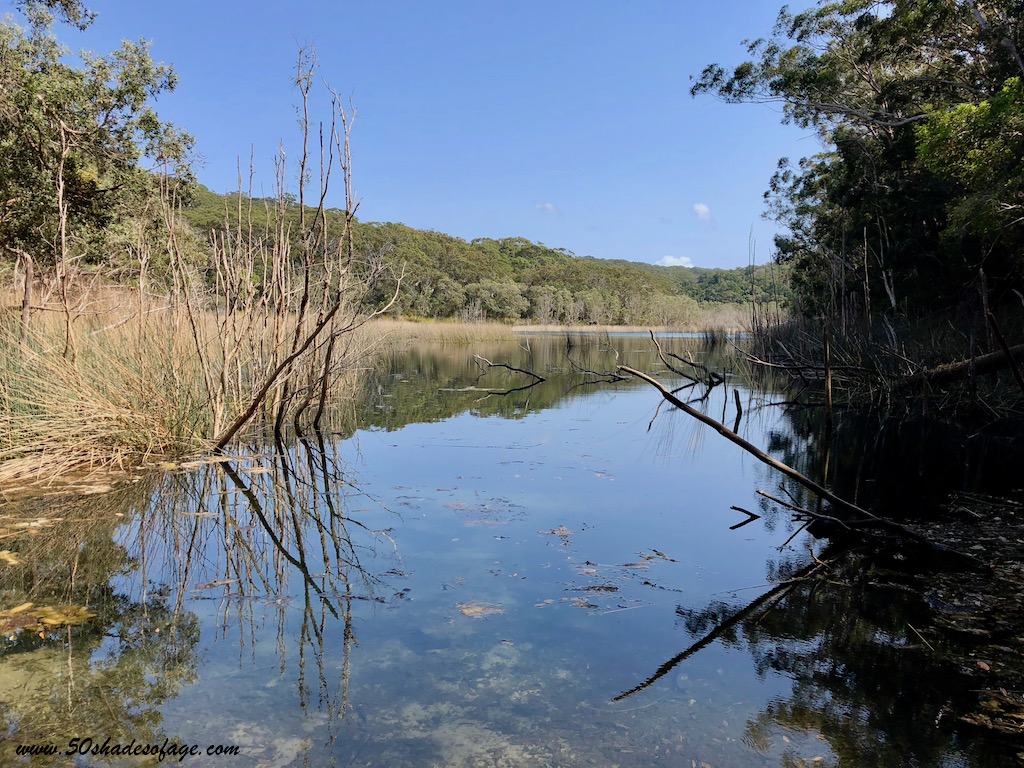 We arrived at our destination of Double Island Point for a well earned cuppa and bickie for morning tea. The coastal headland offers mesmerising views along the beach and out to sea and has a historical lighthouse that sits at the highest point. The illusion of two islands prompted Captain Cook to name the sand spit Double Island Point when he passed by in 1770. 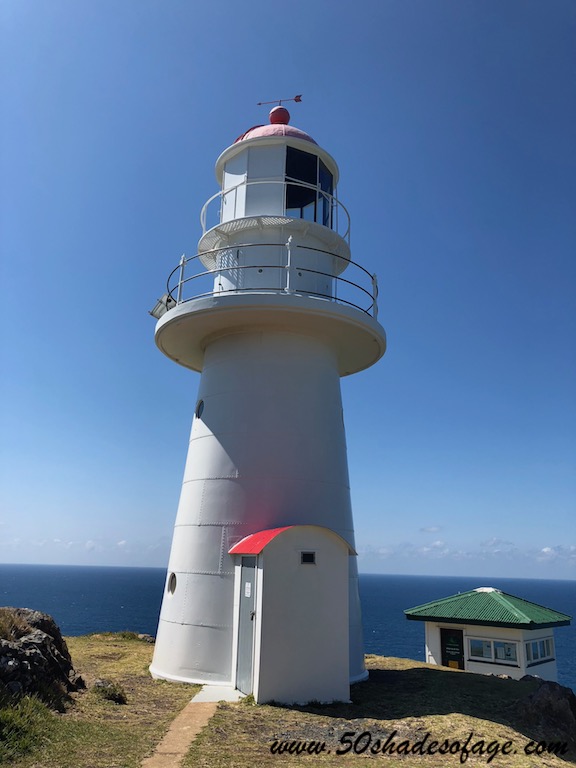 The hike up to the top of the headland took us around 15-20 minutes. During our walk up we saw a pod of dolphins playing just offshore and out to sea a few whale spouts. The lighthouse was built in 1884 and is now operated on solar power. On a clear day, like the one we had, the views are incredible looking south to Noosa, north to Rainbow Beach and Fraser Island. 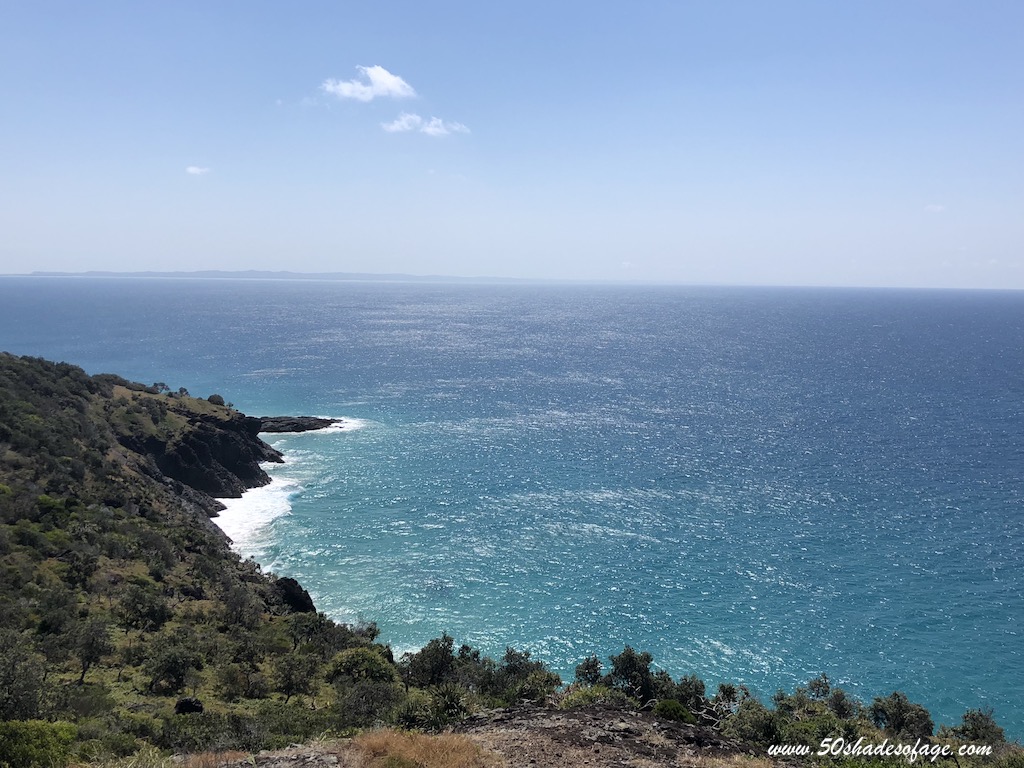 Views to the north from Double Island Point 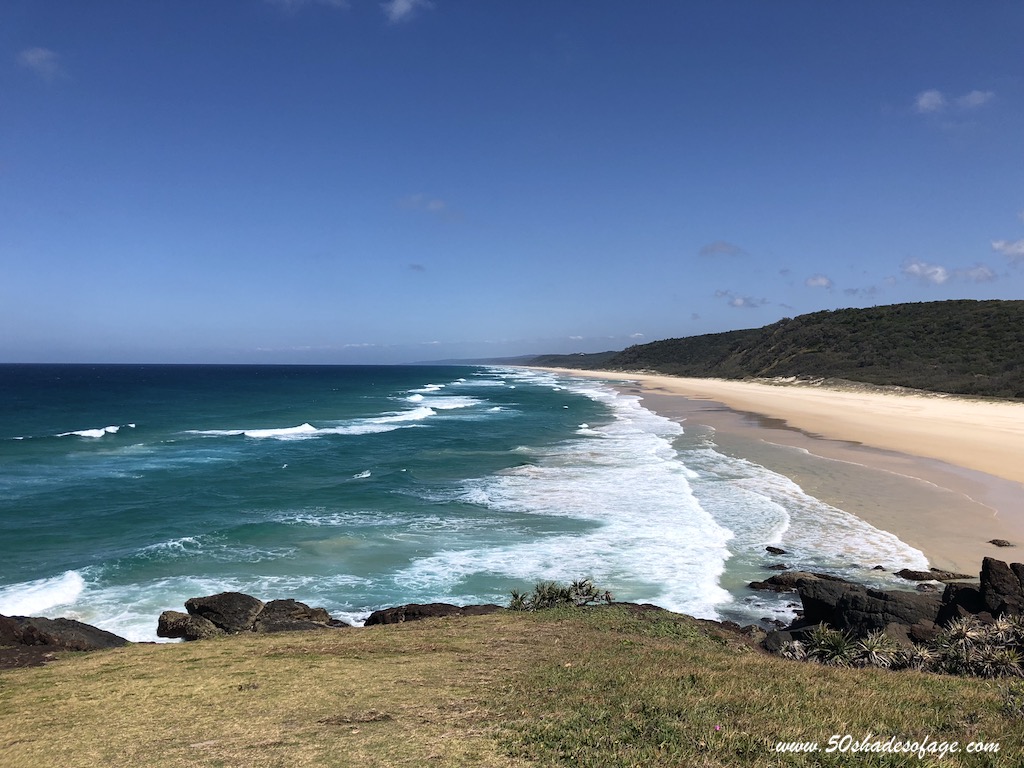 Views to the south from Double Island Point

After our short hike we got back into our cars and made the brief drive to the north side of Double Island Point, where we were immediately sheltered from the blustering southerly wind. This was our lunch stop and an opportunity to try out a great beach game called “Finska” – kind of like skittles, but much more fun! 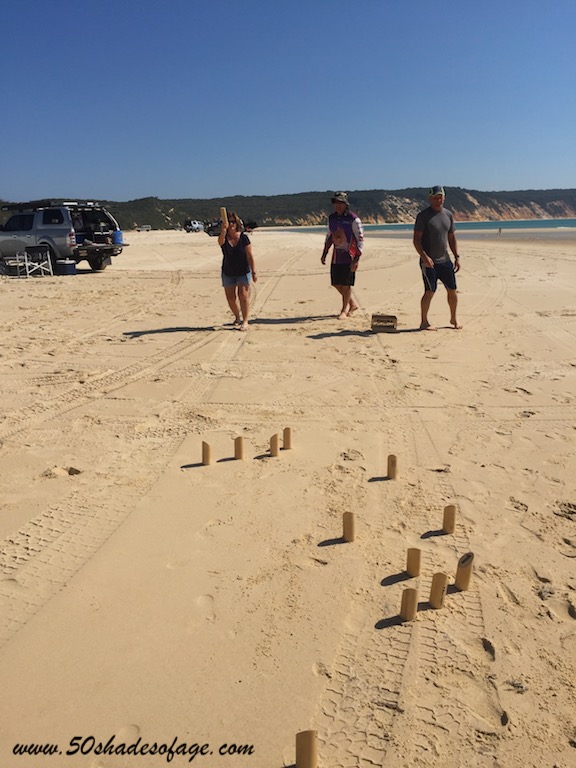 Once we returned to our vehicles the plan was to drive along the beach to Rainbow Beach, however we noticed the tide was swiftly coming in and were worried that we wouldn’t get back. So we made the decision to head back to Teewah Beach and set up camp for the night. 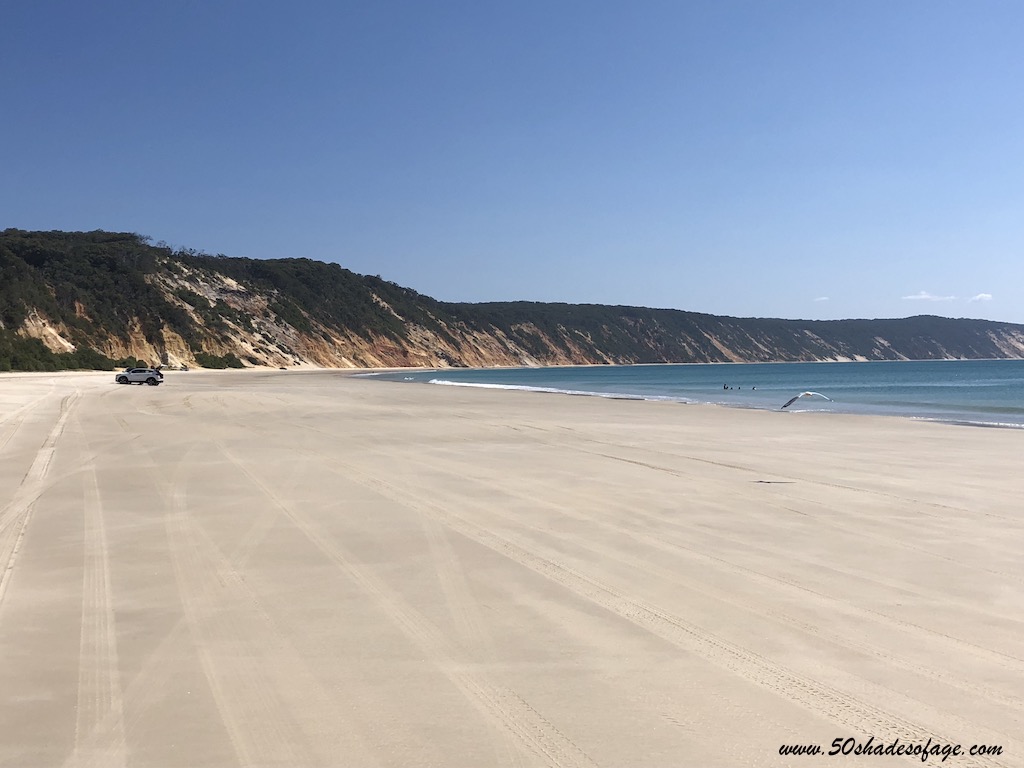 You can pretty much camp anywhere along this long stretch of beach in the sand dunes alongside the coastal cliffs. There are no facilities here such as toilets or showers, but there are some large skip bins where you can dispose of your rubbish. We were dismayed to see toilet paper strewn through the bushes adjoining the camping areas. This is something that needs to be addressed by the National Parks as it’s absolutely disgusting! 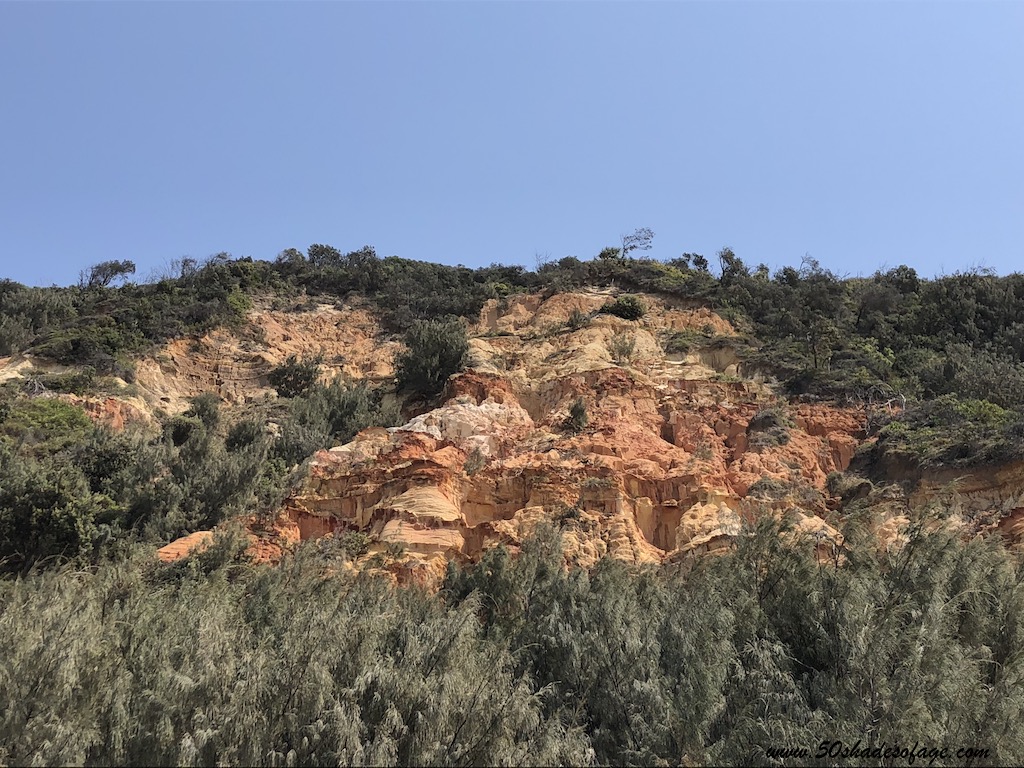 Our camping area allowed us to light a campfire so that we could keep warm from the cold southerly winds that were blustering. After we’d erected our tents we all set off to find some firewood prior to nightfall. Afterwards we sat on top of the sand dunes overlooking the beach and soaked up the serenity and scenery of our surroundings. 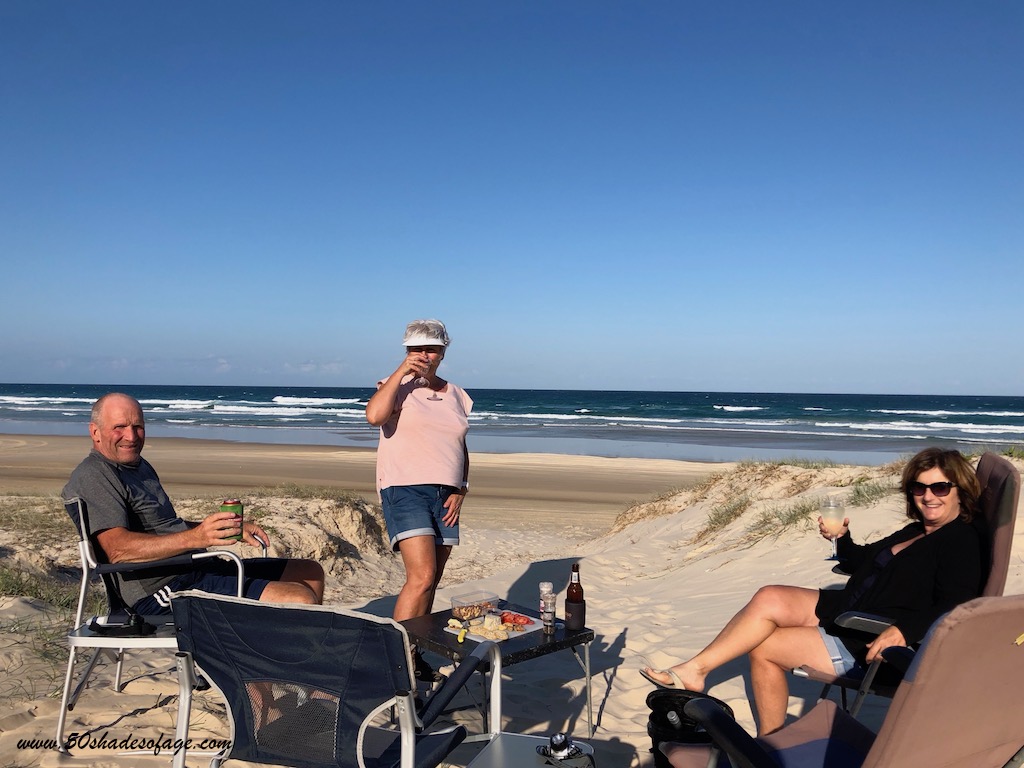 Happy Hour at our Campsite at Teewah Beach

If you prefer you can camp further inland within the Great Sandy National Park, where you can canoe on tranquil waterways, hike through rainforest remnants and across vast sandmass.

The Great Beach Drive continues north along Rainbow Beach to Inskip Point, where you can catch the barge across to Fraser Island. But exploring Fraser Island is probably best to be left to another day, or maybe several days. 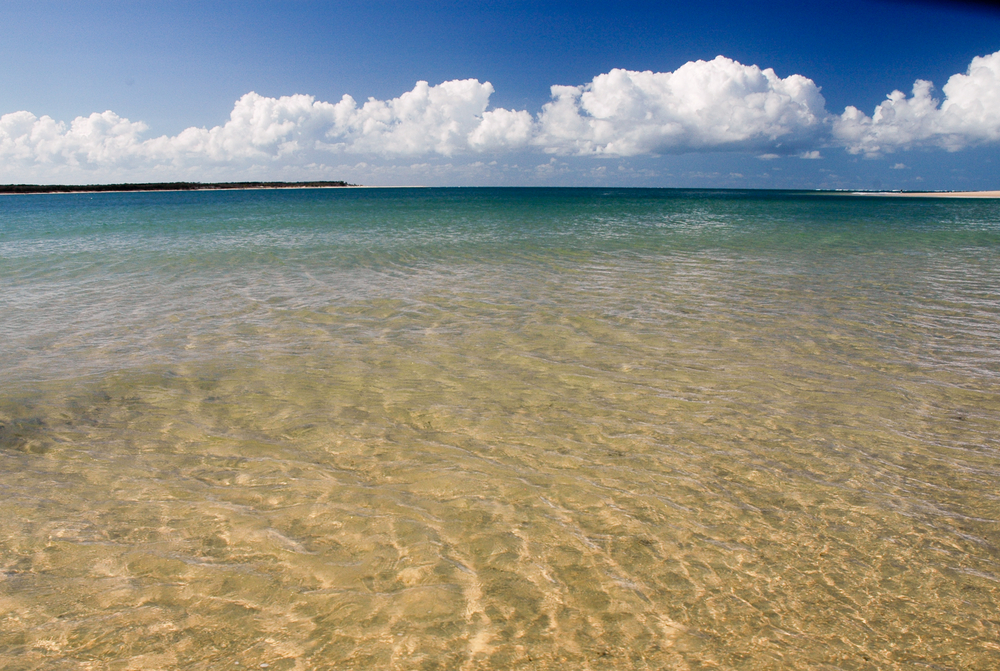 The narrow channel between Inskip Point and Fraser Island

Our two day/one night 4WD and camping adventure in the Cooloola Recreation Park was amazing. Fortunately we chose to explore this area on a weekday, as we had heard that the area gets very busy on weekends and holidays. No wonder it’s such a popular holiday destination and a vital refuge for coastal wildlife. Make sure you put this on your itinerary next time you visit Noosa.

Spread the love
Cooloola CoastCooloola Recreation ParkDouble Island PointGreat Sandy National ParkNoosa HeadsSunshine CoastTeewahTravel Queensland
By 50 Shades, October 1, 2018 Kathy was a 50 something year old when she started up this blog 6 years ago, but has since turned over another decade and is now in her early 60s. She is married with two adult children and lives on the Tweed Coast of New South Wales, Australia. Kathy enjoys living life to the fullest and loves to keep fit and active by maintaining a healthy diet and exercising regularly. Some of her interests include reading, photography, travelling, cooking and blogging! Kathy works part-time as a freelance writer but her real passion is travelling and photographing brilliant destinations both within Australia and overseas and writing about it.