The Ancient Ruins of Pompeii 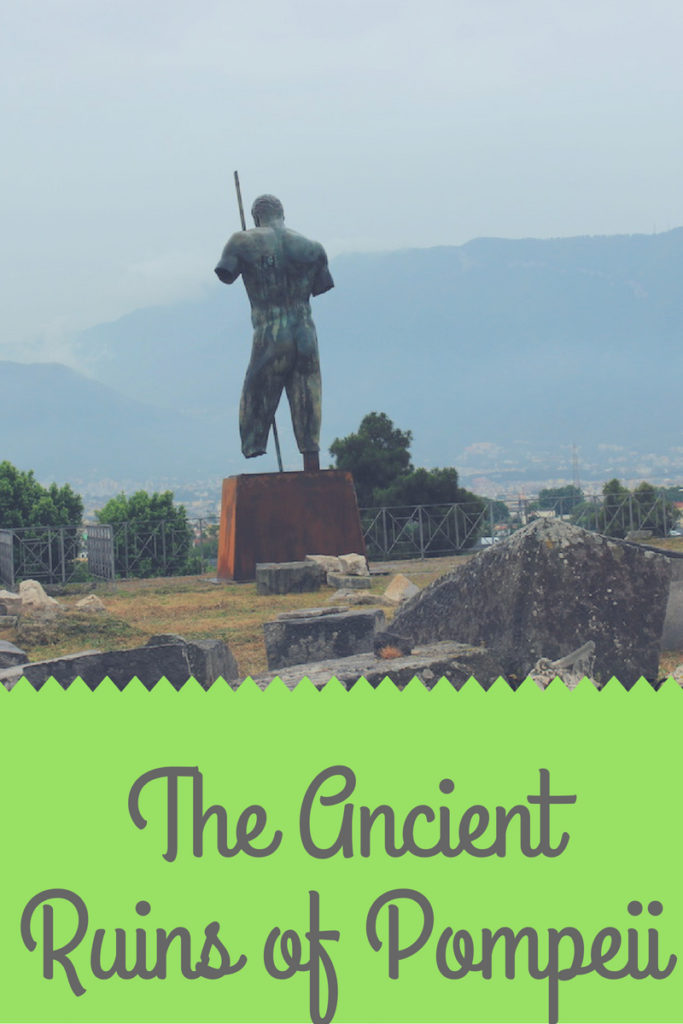 I have seen numerous ancient ruins throughout Europe, such as Ephesus in Turkey and The Forum in Rome, but nothing really prepared me for my visit to the ancient ruins of Pompeii in Naples. The magnitude of this buried city that dates back to 79 A.D. is astonishing and to think that I only had a couple of hours to see it sent me into a panic.

We were on our way back to Rome after spending 5 idyllic days in Positano on the Amalfi Coast of Italy, when our driver suggested we take in the remarkable ruins of Pompeii prior to catching our early afternoon train. In hindsight, I don’t know why we didn’t include this incredible place in our travel itinerary because it was extraordinary! 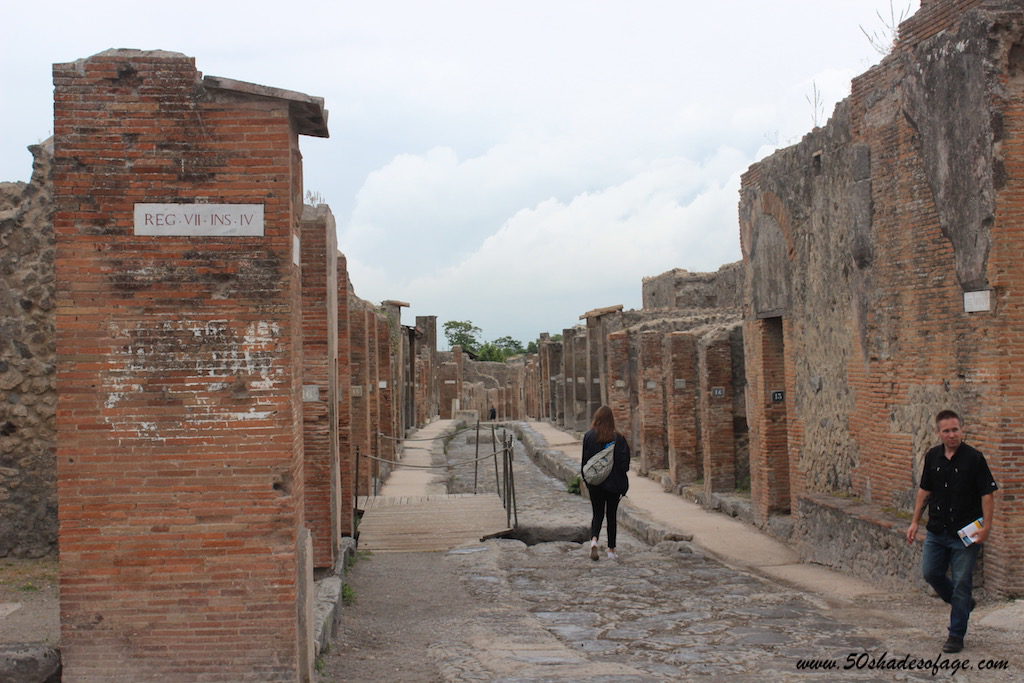 The cobblestone streets of ancient Pompeii 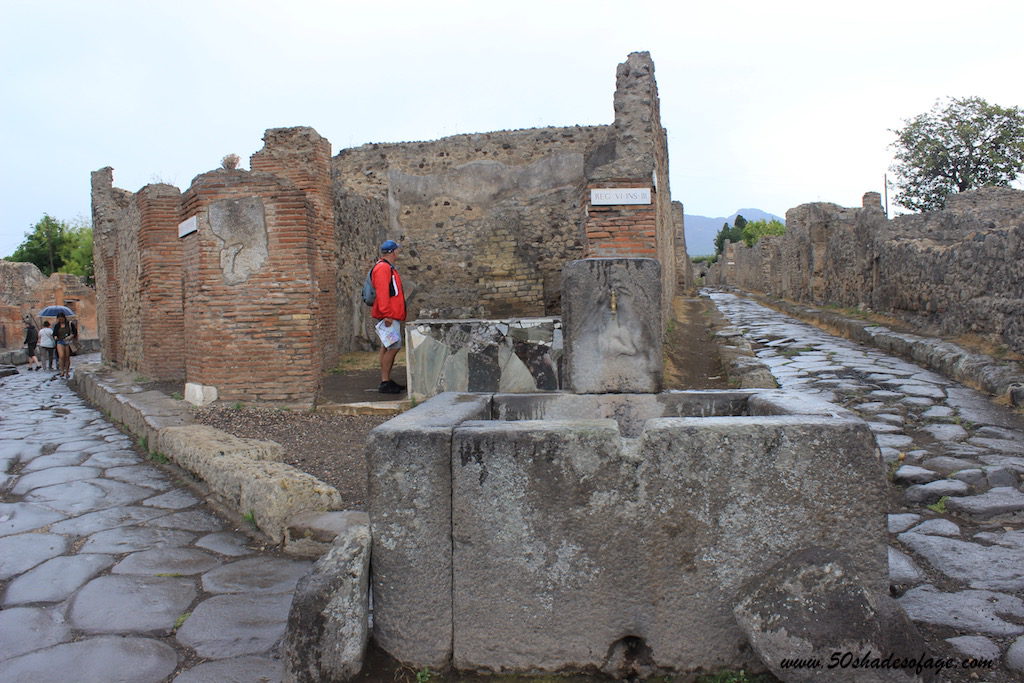 Pompeii – What to See

If you want to make sense of what you are viewing you really do need a tour guide, an audio guide or a very good guide book. In our case we only had a map and once we got inside the gates there was little in the way of information or even signage. 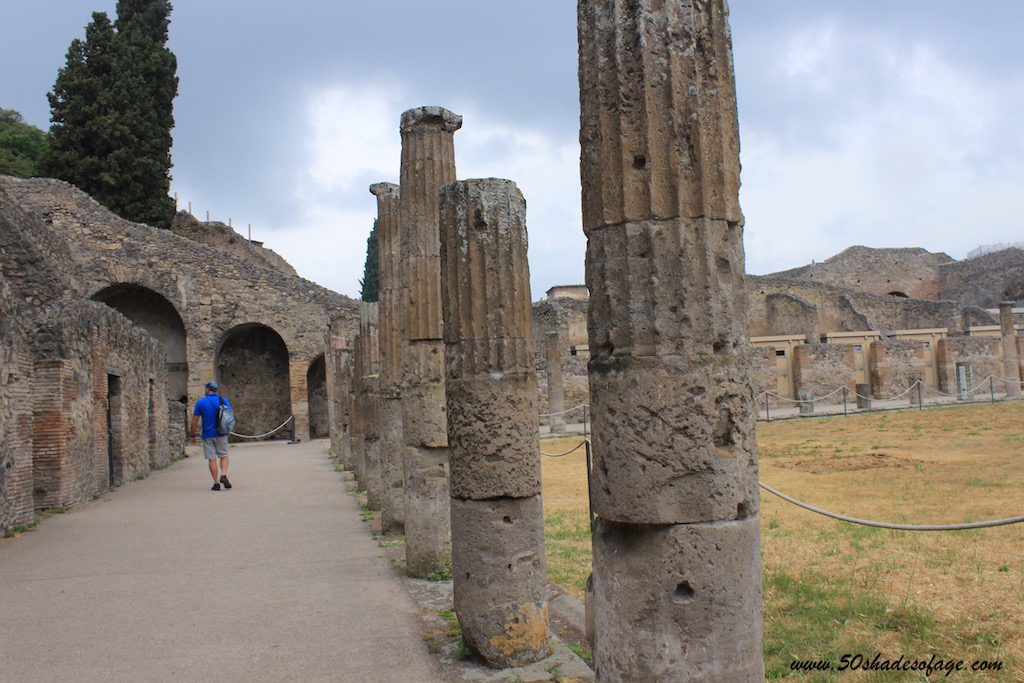 The map they give you is divided into sectors, so we started in the first sector and strolled down cobbled street upon street of residences. Thankfully the map also indicates number by number through the not-to-miss sights at Pompeii. Otherwise you can also download a great guide right on your iPhone with the Pompeii app. 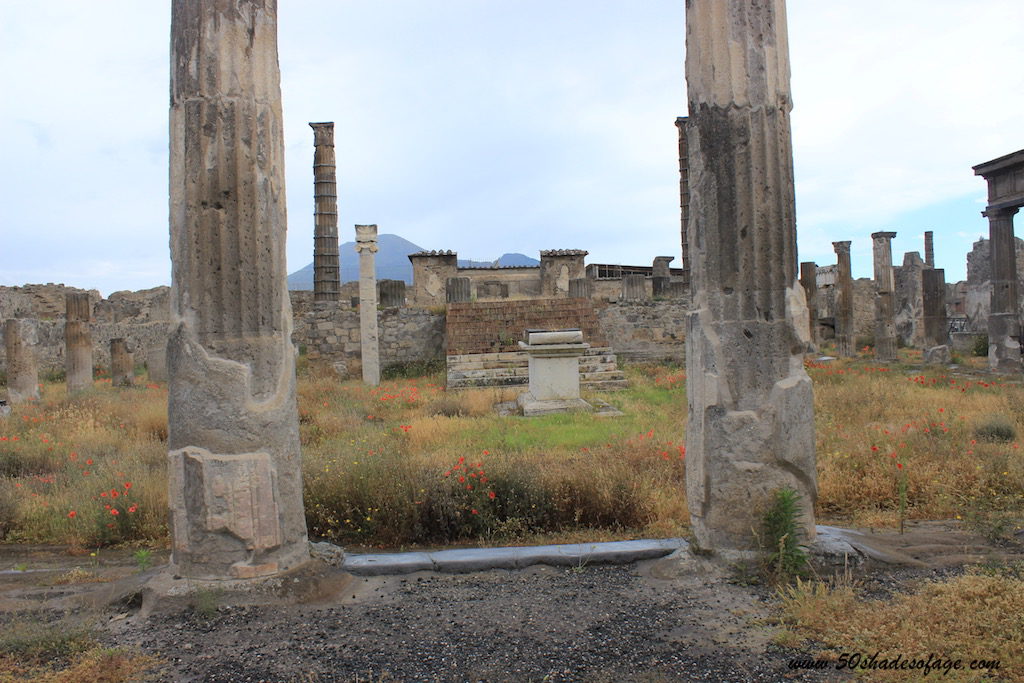 We finally came across a large villa with attached stables and decided to have a look inside. There was a room with beautifully frescoed walls and ceilings that was sealed off to the public, that you could view through a window. I stood patiently awaiting my turn to photograph this amazing room whilst one tourist decided she was going to take a hundred photos before allowing anyone else to have a turn! 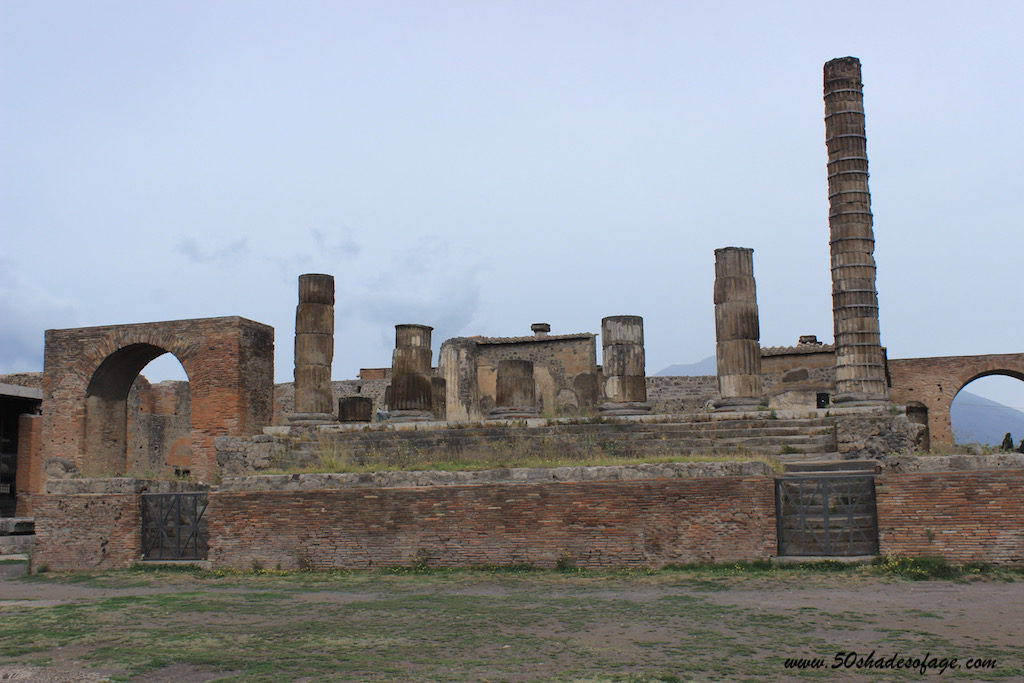 This was the most frustrating part of visiting Pompeii. The crowds and the tour groups gather together in the more popular spots of the ancient ruins that makes it extremely difficult for anyone else to take photos or even get a glimpse of some of the points of interest. 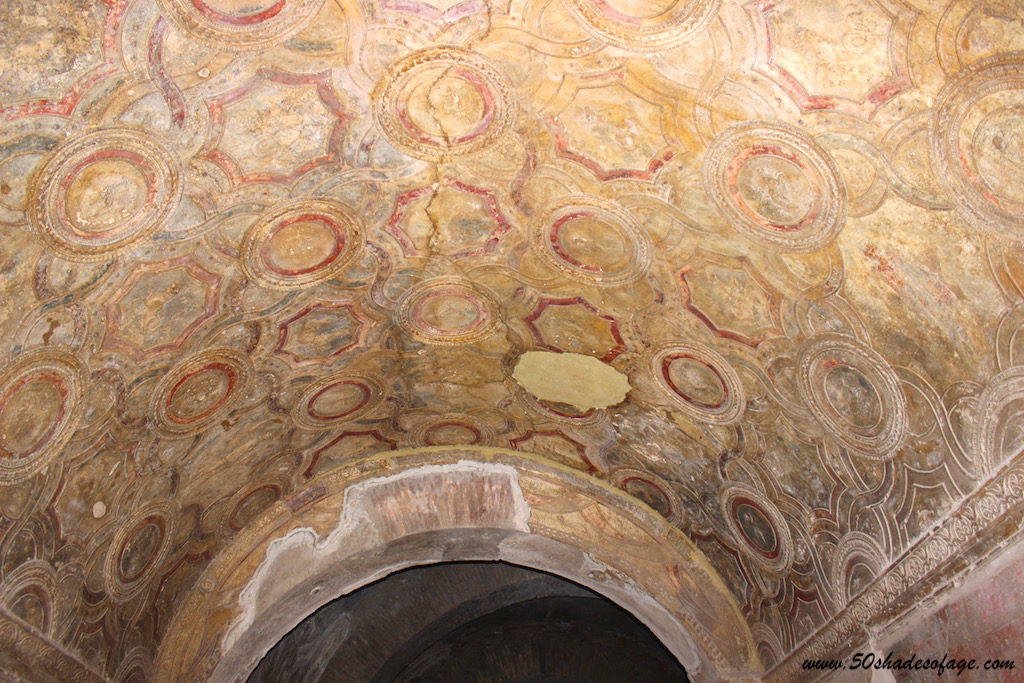 We continued on our way trying to see as much as we could in the short time we had allocated and managed to see some of these highlights: 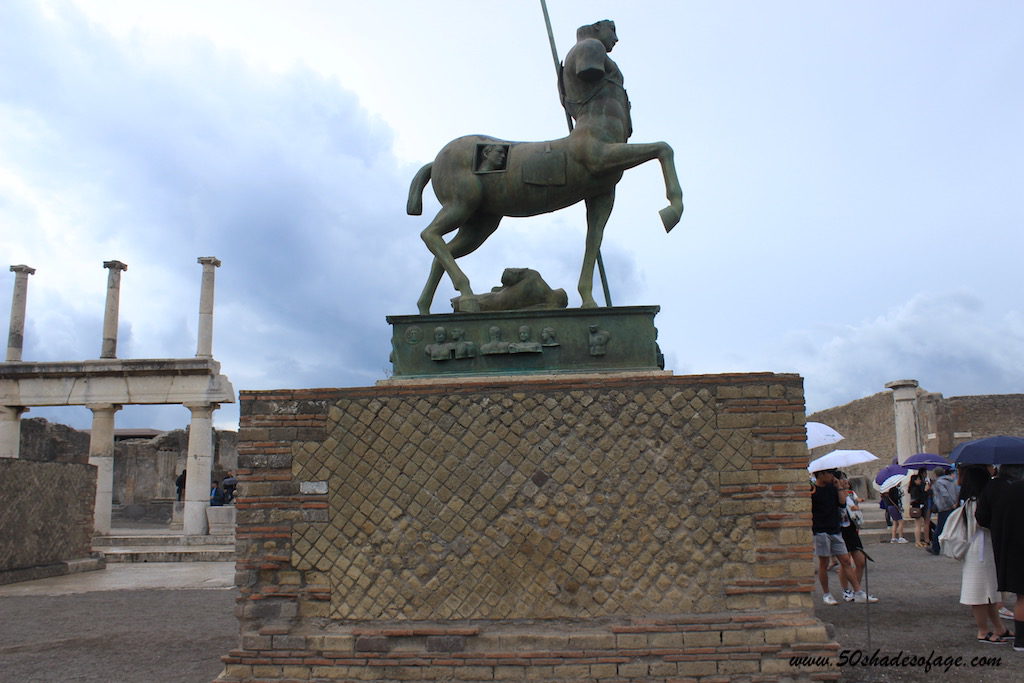 Statue in the Pompeii Forum 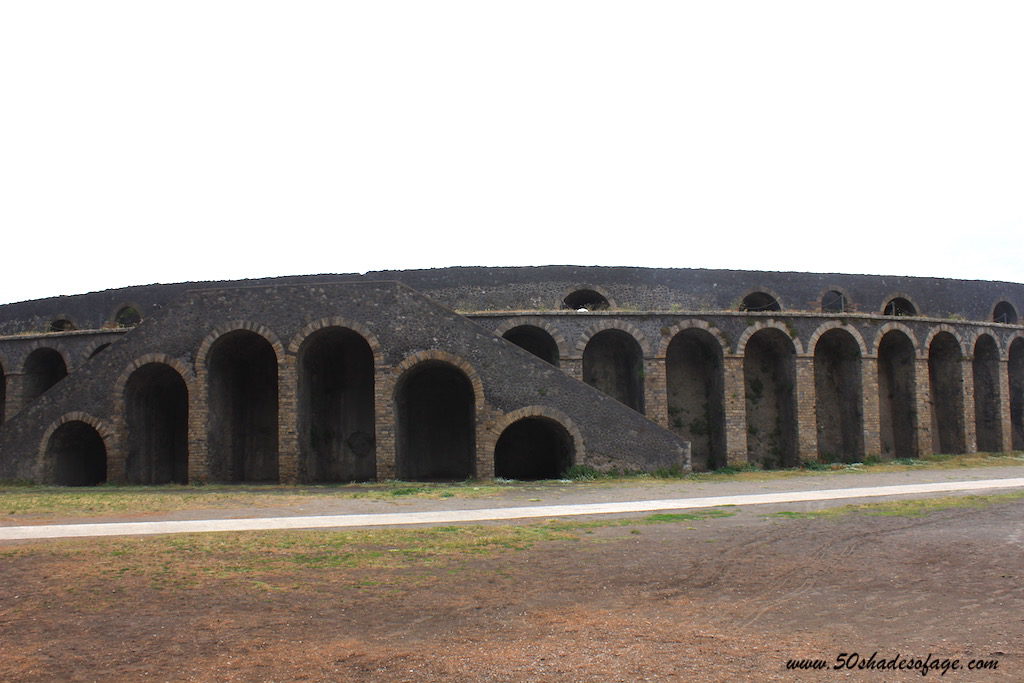 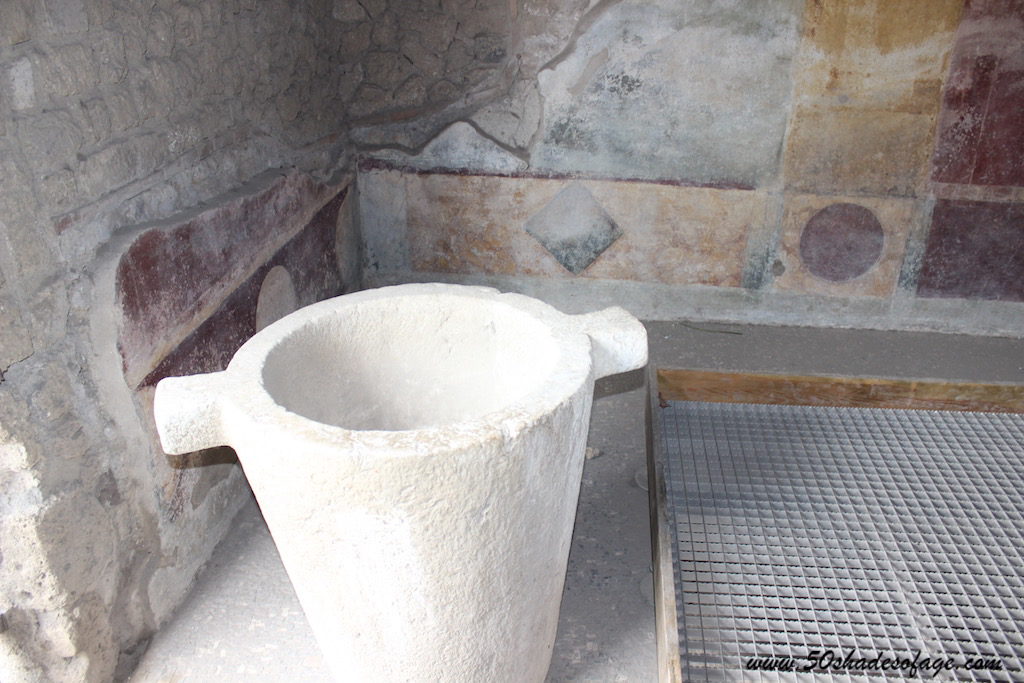 4. The Grain Stores where you can see many of the plaster casts of Vesuvius victims and household effects taken out of the residences. 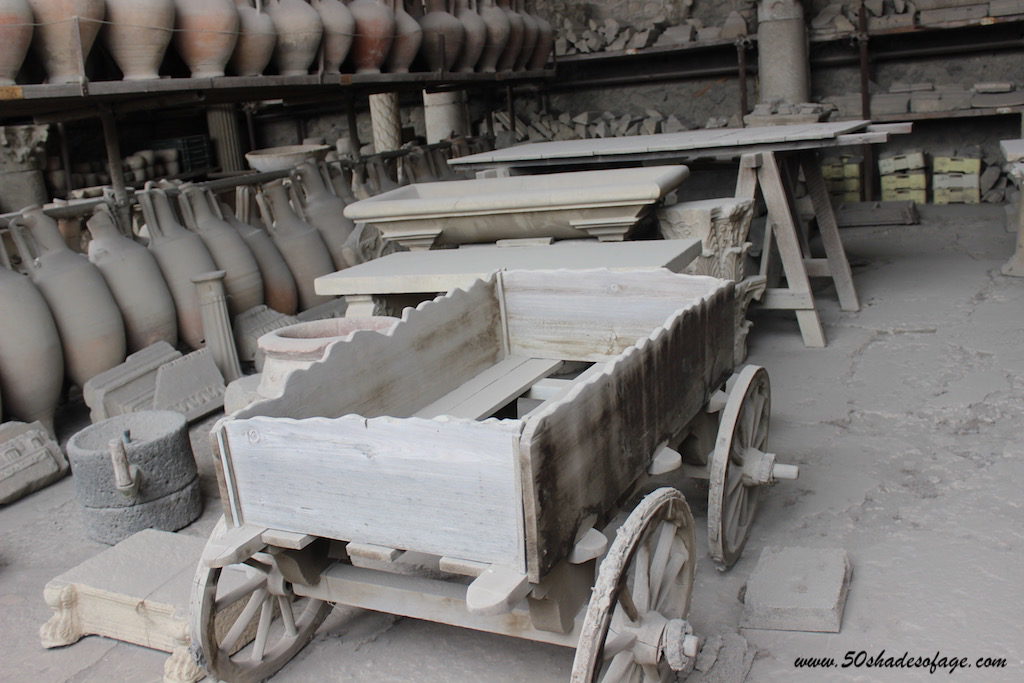 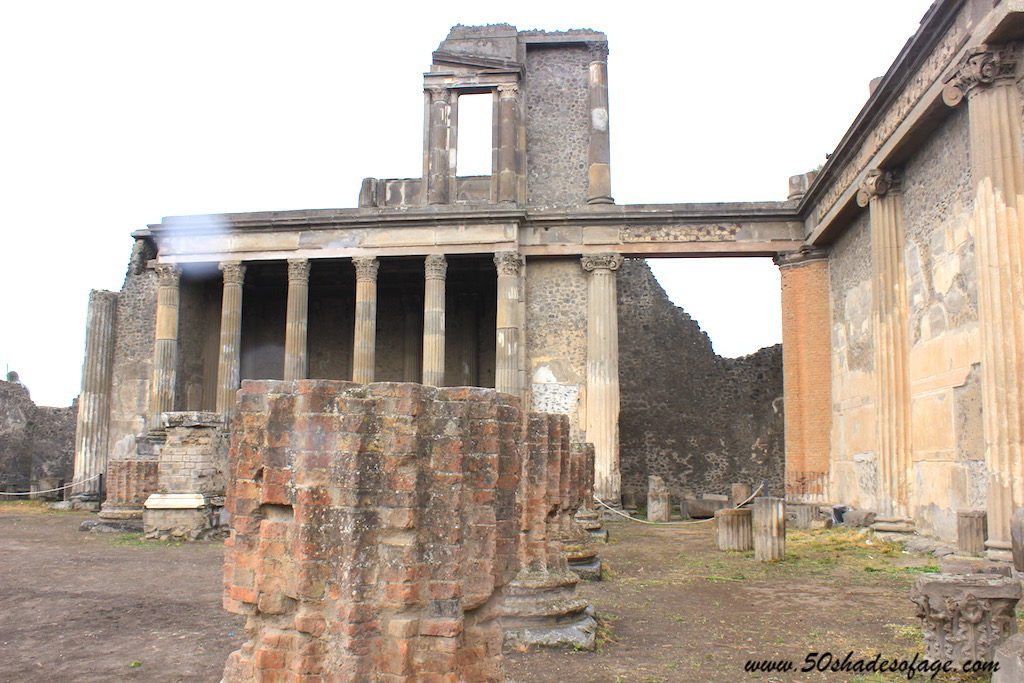 The houses and villas in the ancient city of Pompeii vary from modest dwellings to large and magnificent villas with sumptuous decorations; from simple workmen’s houses to the elegant residences of the noble class; from the homes of merchants which were built around their workshops; to those with their own vegetable garden and plots of land used for agricultural purposes. 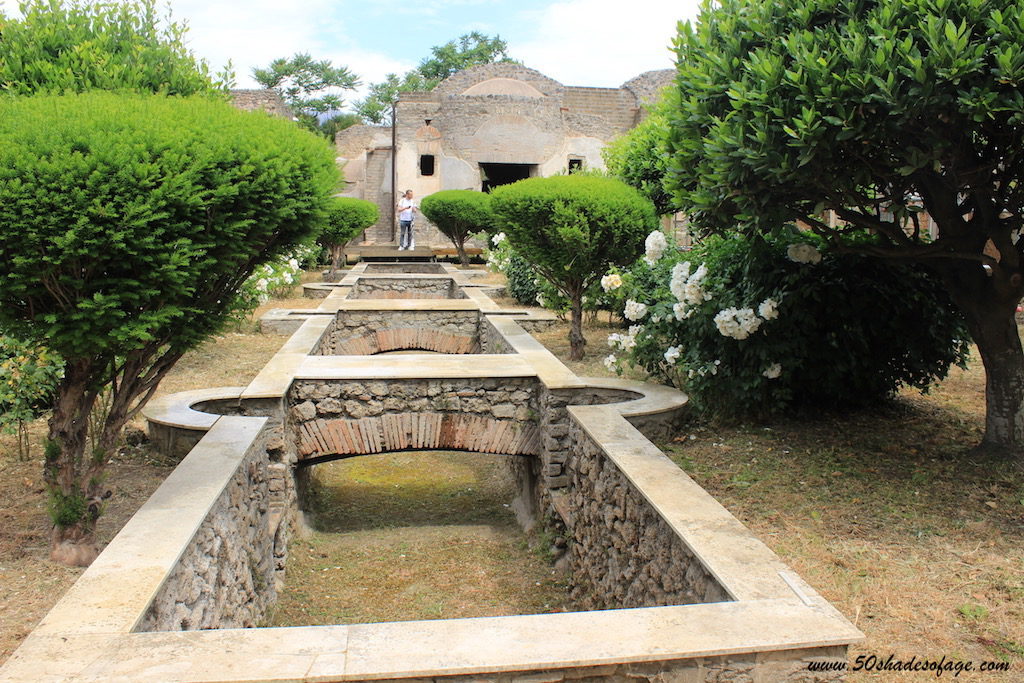 Gardens in one of the villas in Pompeii

Some of the houses contain the remains of some very interesting mosaics depicting different scenes or geometric designs, frescoes, painted walls and some feature elegant marble flooring. There was even graffiti written upon the walls of the buildings in Pompeii! 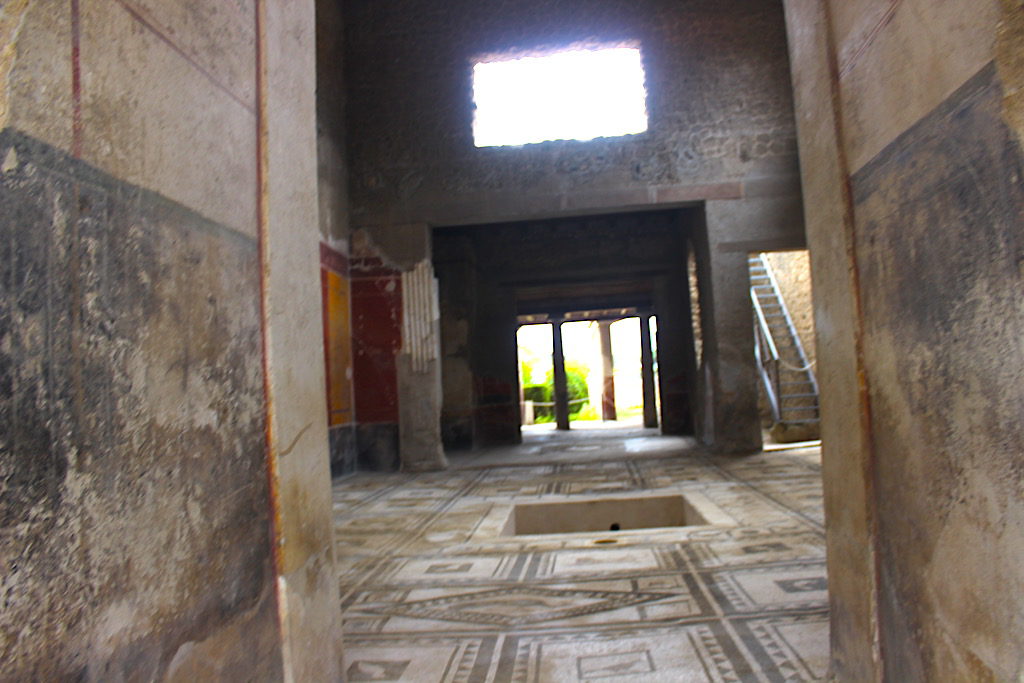 Mosaic floor in one of the houses 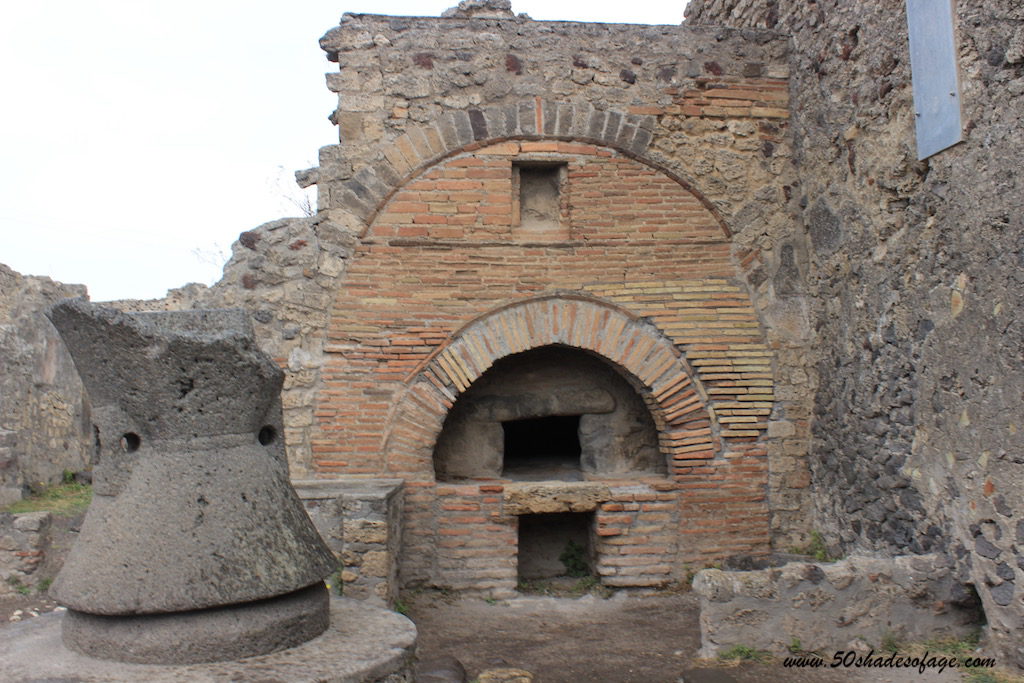 A kiln and grain mill

There were also bakeries, taverns, shops, workshops, hotels and restaurants to serve the inhabitants of this busy port city. 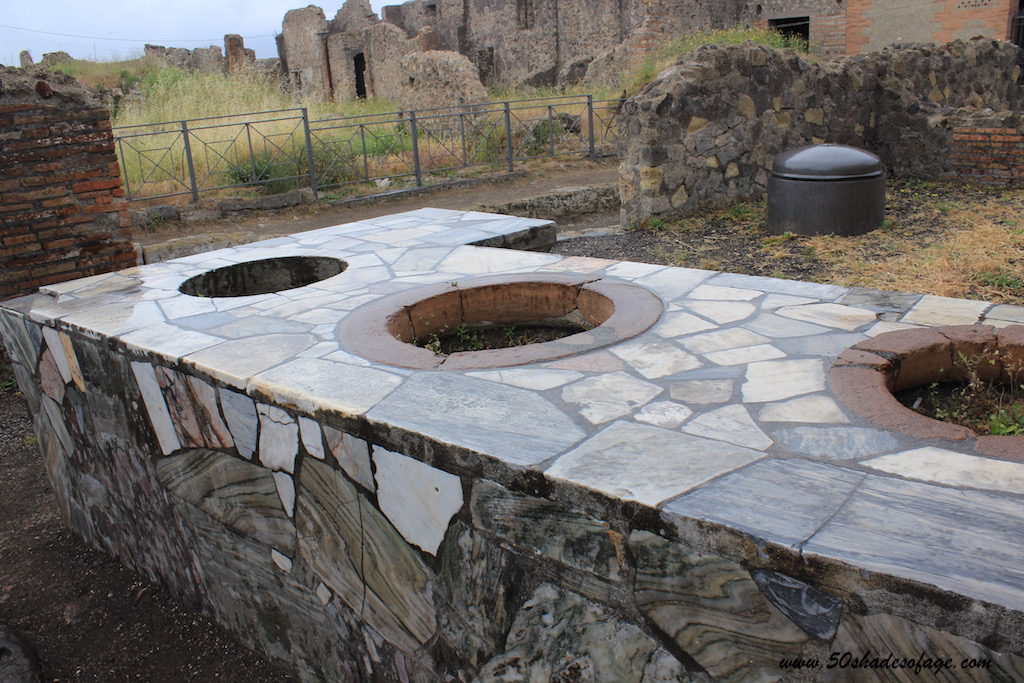 I guess the most intriguing part of the Pompeii ruins is the fact that most of the residents were evacuated to safety in the aftermath of the volcano, however about 2,000 remained and were buried in hot ash. As the ash hardened, it moulded itself to those who had died. The bodies deteriorated, leaving a cavity inside the hardened ash. 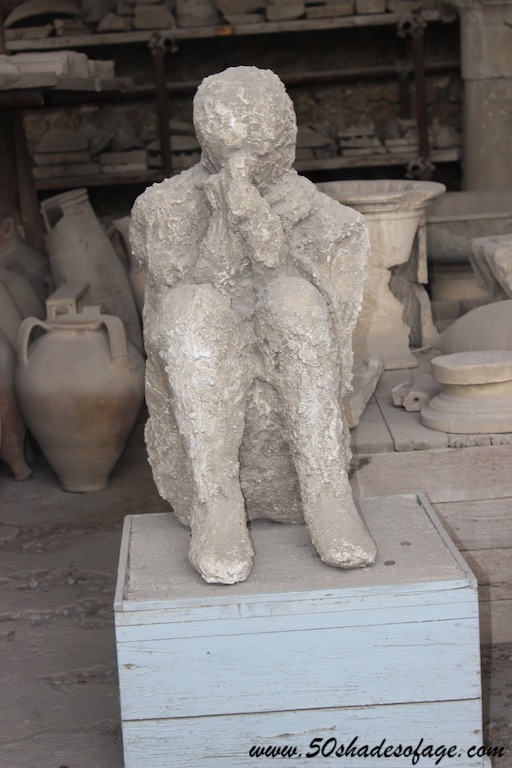 Plaster cast of a Pompeii person

Scientists poured plaster of paris into the open spaces in the hardened ash. The plaster replicas now tell a chilling tale of the final moments of these poor people. Whether they were huddled together, with family or alone, the story is the same – they died a horrific death. 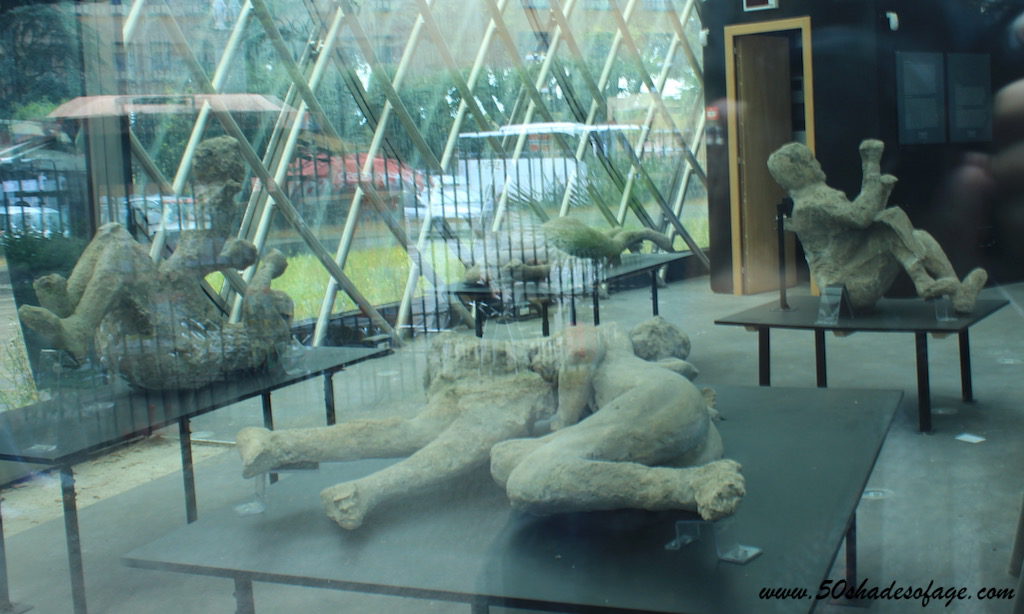 There are displays of these plaster-cast people throughout the ancient city in the Grain Stores, The Garden of The Fugitives and in a few houses. It’s a poignant reminder of this natural disaster.

Pompeii is one of the most significant proofs of Roman civilization and, like an open book, provides outstanding information on the art, customs, trades and everyday life of ancient Rome. It really is the most astounding tourist attraction that I have ever witnessed and I’m so glad that I battled the crowds to see it.

Spread the love
Ancient Ruins ItalyNaplesPompeiiTravel Italy
By 50 Shades, June 11, 2018 Kathy was a 50 something year old when she started up this blog 6 years ago, but has since turned over another decade and is now in her early 60s. She is married with two adult children and lives on the Tweed Coast of New South Wales, Australia. Kathy enjoys living life to the fullest and loves to keep fit and active by maintaining a healthy diet and exercising regularly. Some of her interests include reading, photography, travelling, cooking and blogging! Kathy works part-time as a freelance writer but her real passion is travelling and photographing brilliant destinations both within Australia and overseas and writing about it.