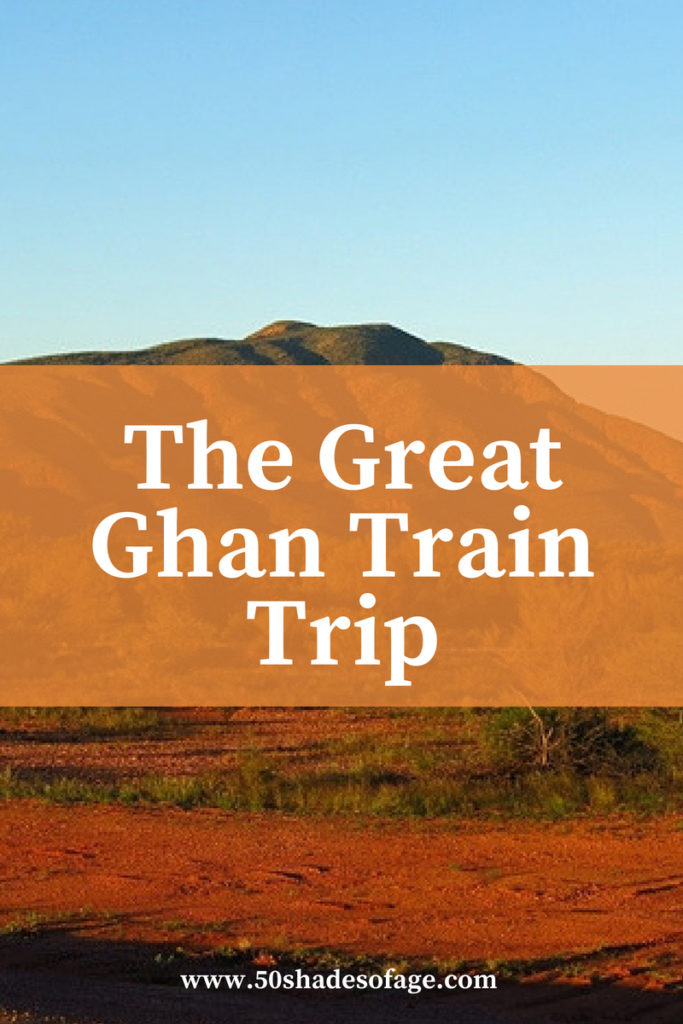 The great Ghan train trip departs from Adelaide, South Australia and heads northwards through the dead centre of Australia to Darwin in the Northern Territory. It’s a two night/three day train trip taking in the many varied and wonderful sights of the heart of this continent. We were fortunate enough to take this epic train journey 11 years ago.

It is a ‘must do’ on most travellers bucket lists, unless you want to jump in a 4WD vehicle and drive all the way yourself.  It’s 2,979 kilometres (1846 miles) in distance and although we found the scenery unfolding before our eyes to be fascinating, there’s not a lot between the two cities of Adelaide and Darwin. 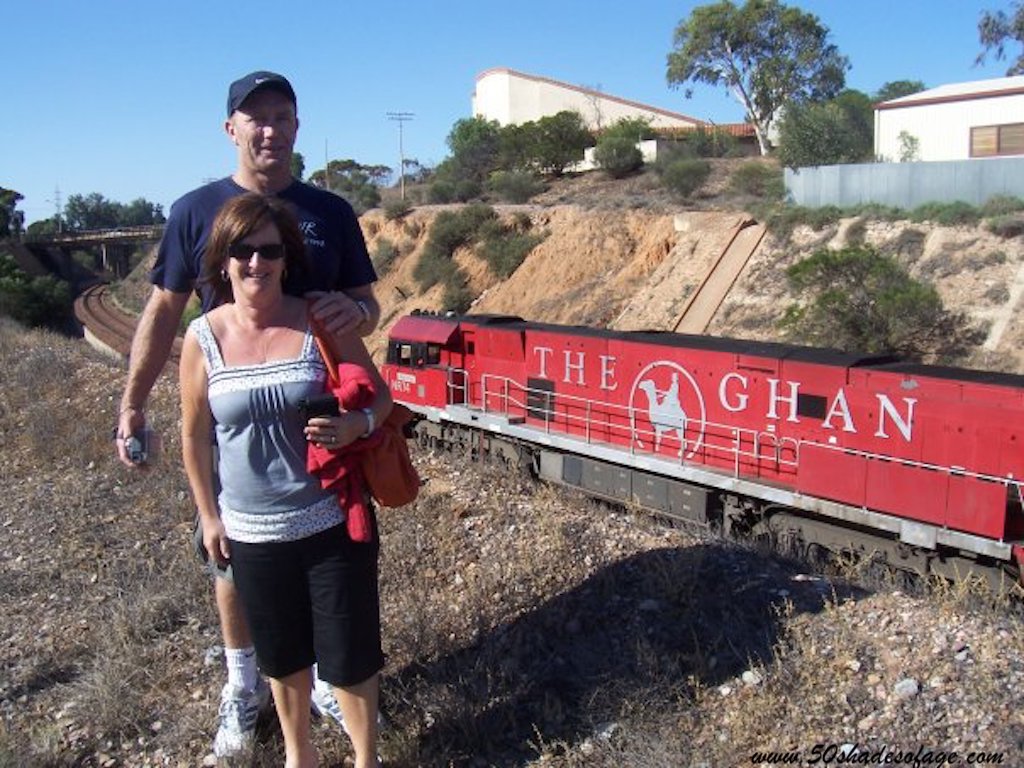 The train has two levels of accommodation –  Gold or Red service. Gold service includes a cabin with a double or single beds with meals being served in the Gold dining car. The Red service is a day/nighter reclining seat with basic meals available in the Red dining car. 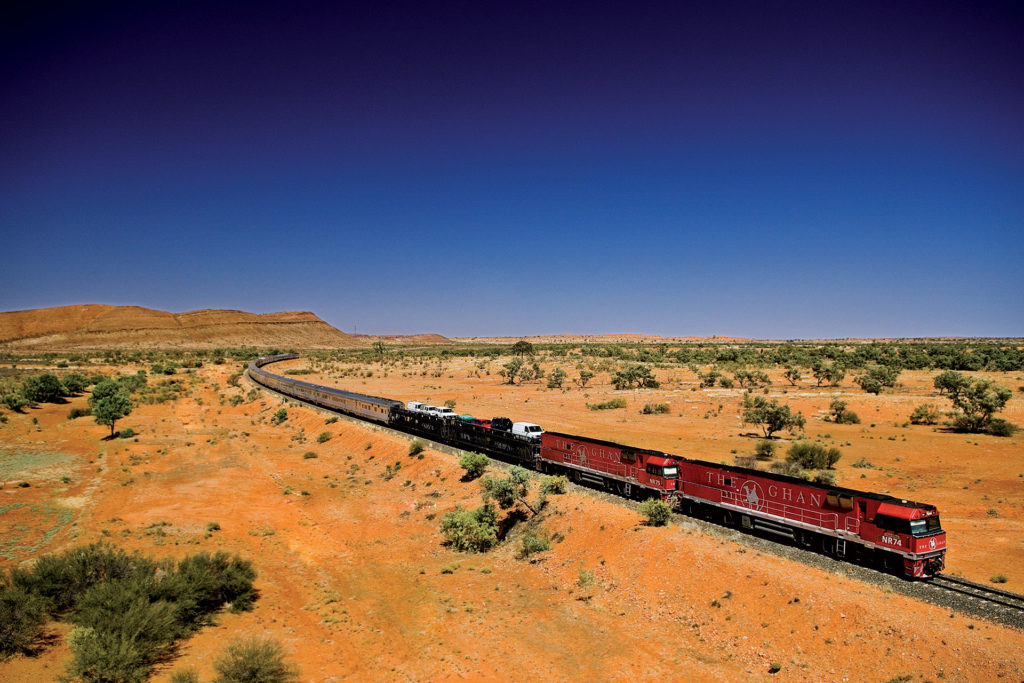 The Ghan Train with the Flinders Ranges in the background Image Credit: www.southaustralia.com

Depending on your budget and desired level of comfort and privacy, then I would recommend the Gold service, however in this instance we decided to rough it and go with the Red service. Although we were more than comfortable on our recliners, had access to a hot shower and were able to have snacks, drinks and meals in the dining car, we didn’t have much privacy. If I had my time over I would have splashed out for a sleeper cabin. 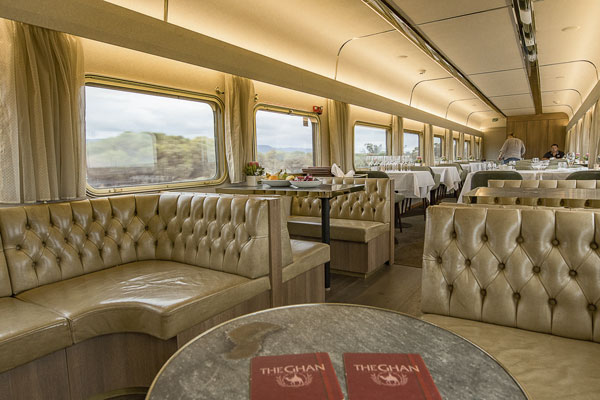 Along the rail journey The Ghan train stops at Port Augusta, Alice Springs and Katherine until its final destination of Darwin.

The seaport city Port Augusta is located at the tip of the Spencer Gulf in South Australia. It is described as the ‘crossroads to Australia’ and is close to the spectacular Flinders Ranges. We had only a short whistle-stop here for around an hour, so we took a stroll around the city. 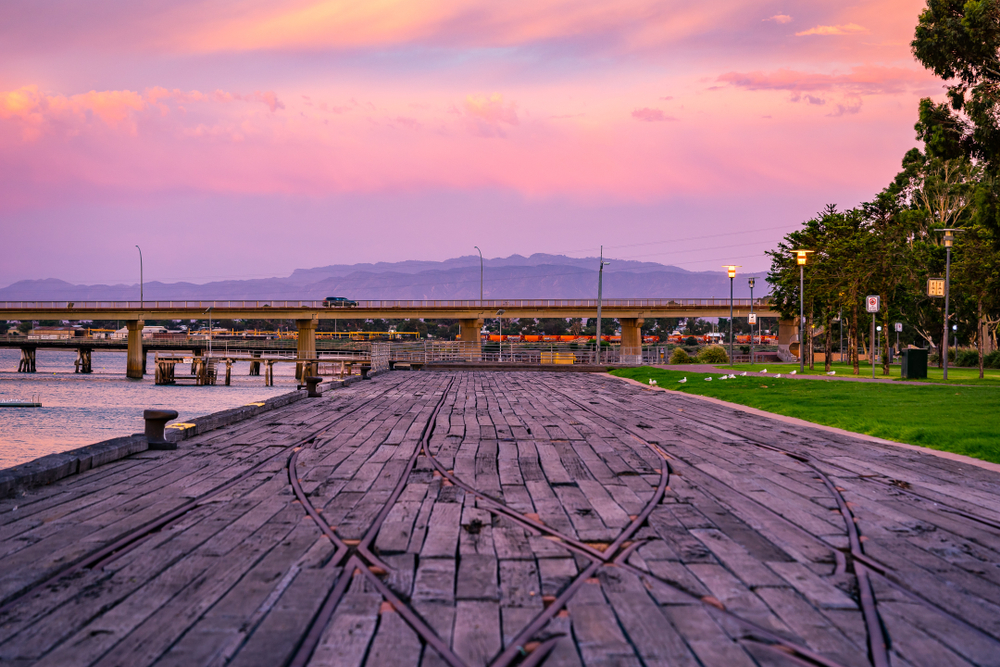 Port Augusta on the Spencer Gulf

After an hours stop in this thriving city, where the desert meets the sea, it was back on the train for the rest of the day and night.

After the first night on the Ghan we crossed the border into the Northern Territory into the town of Alice Springs which is the gateway for visiting Uluru or Ayers Rock, the MacDonnell Ranges, Rainbow Valley and the Finke Gorge. Alice is geographically located in the dead centre of Australia. 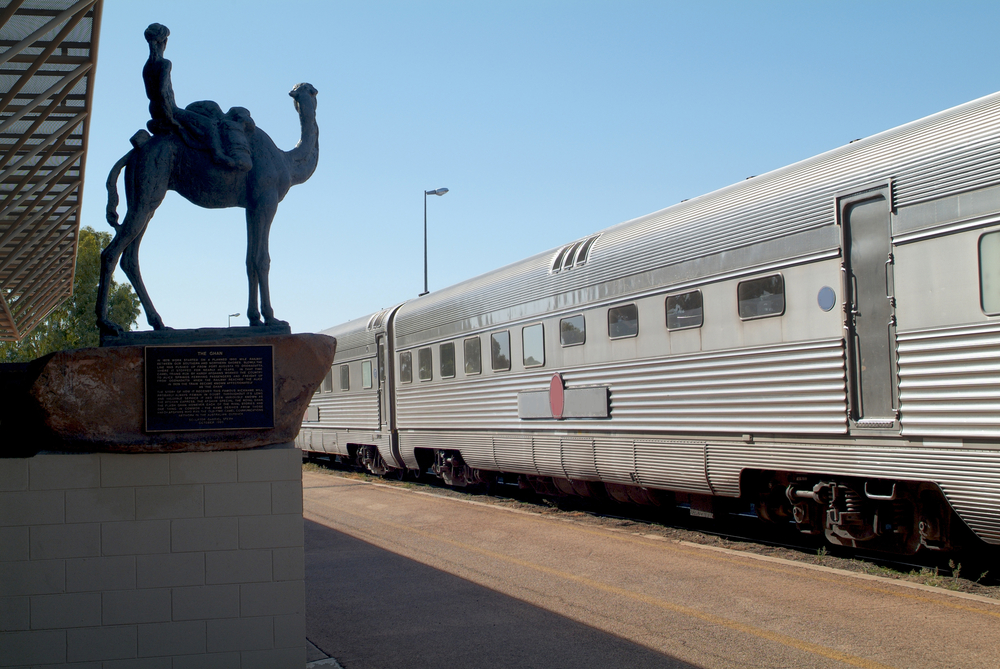 You can board the Alice Wanderer bus for a hop on hop off tour that includes stories of the early Afghan cameleers, Flying Doctors and Alice Springs School of the Air. You can also visit many of the Aboriginal Art galleries. 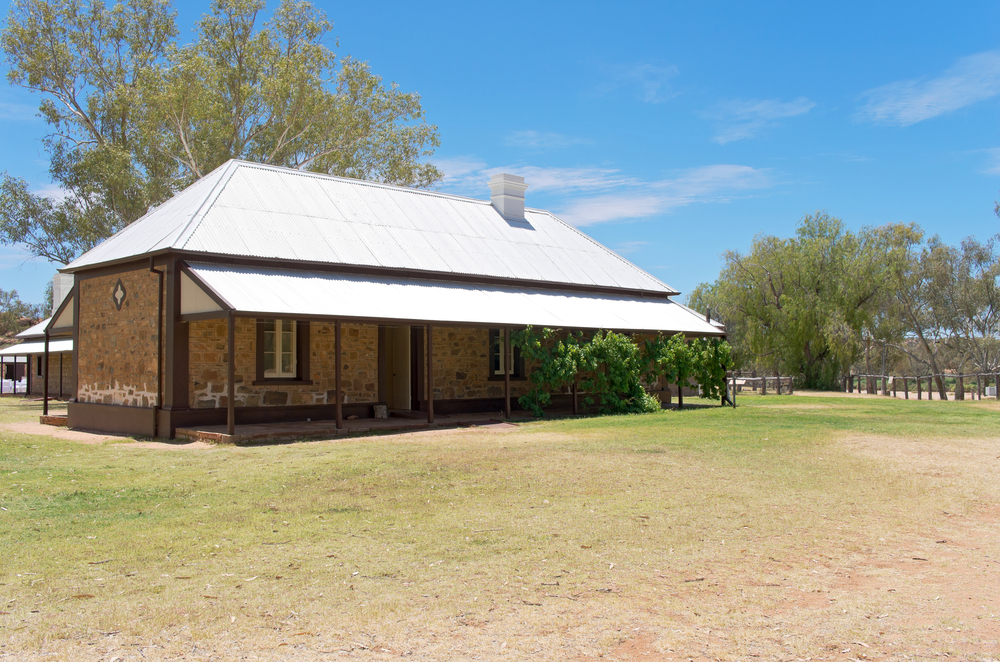 Alice is famous for hosting the Henley-on-Todd an annual sailing and rowing regatta held on a dry river bed. It is one of the great Australian traditions! 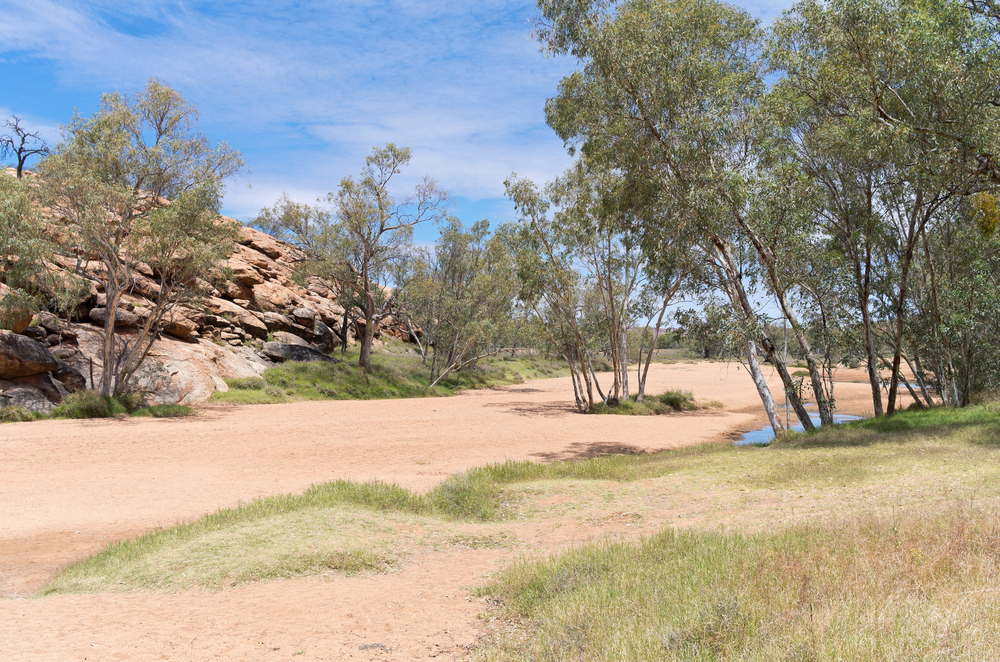 Following another night sleeping aboard The Ghan we reached the town of Katherine which is aptly described as being the ‘Adventure Centre’ of the vast area that surrounds it. 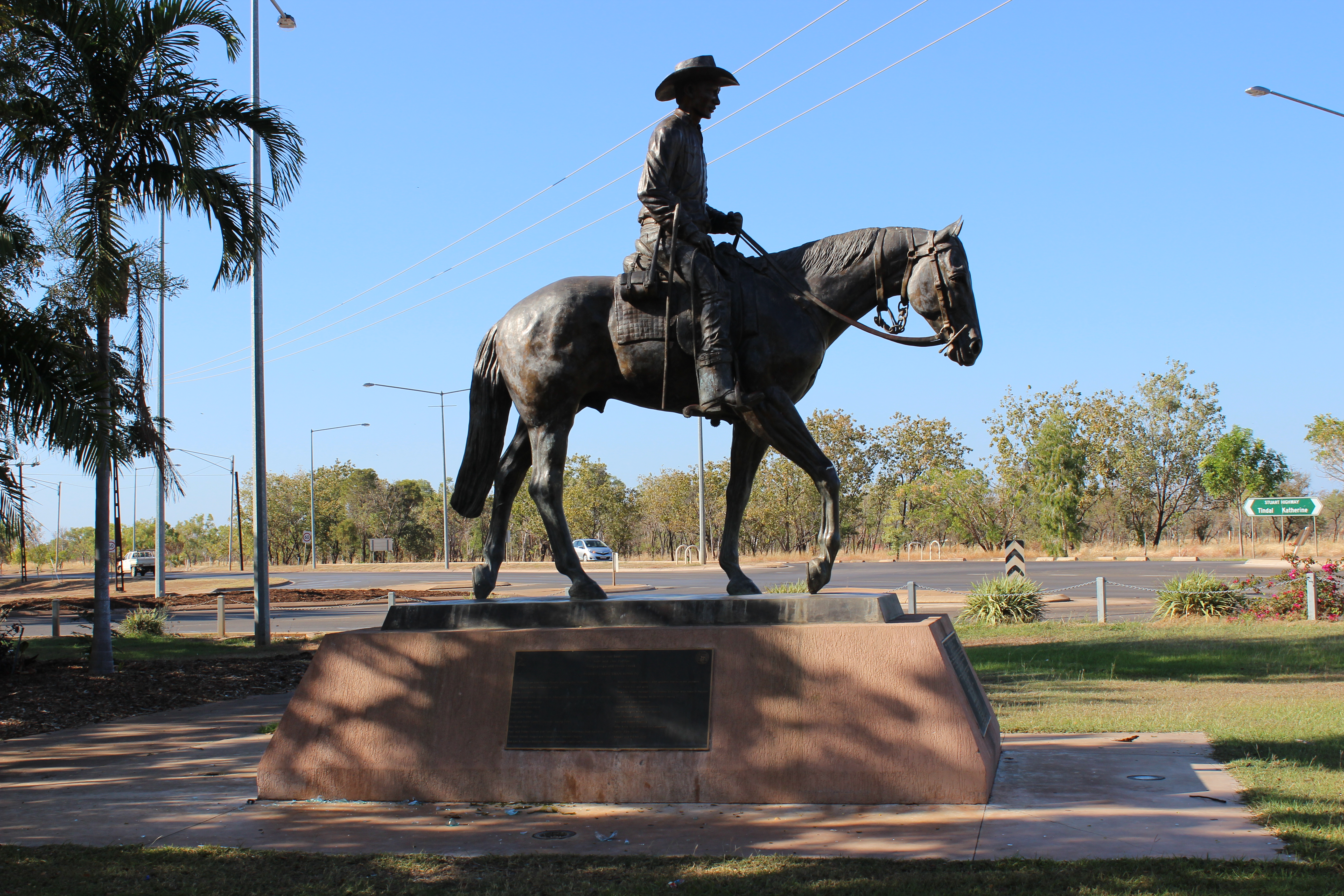 Only a short few kilometres away is the majestic Katherine Gorge or Nitmiluk National Park where we decided to get on a tour to explore the gorge on a cruise boat. 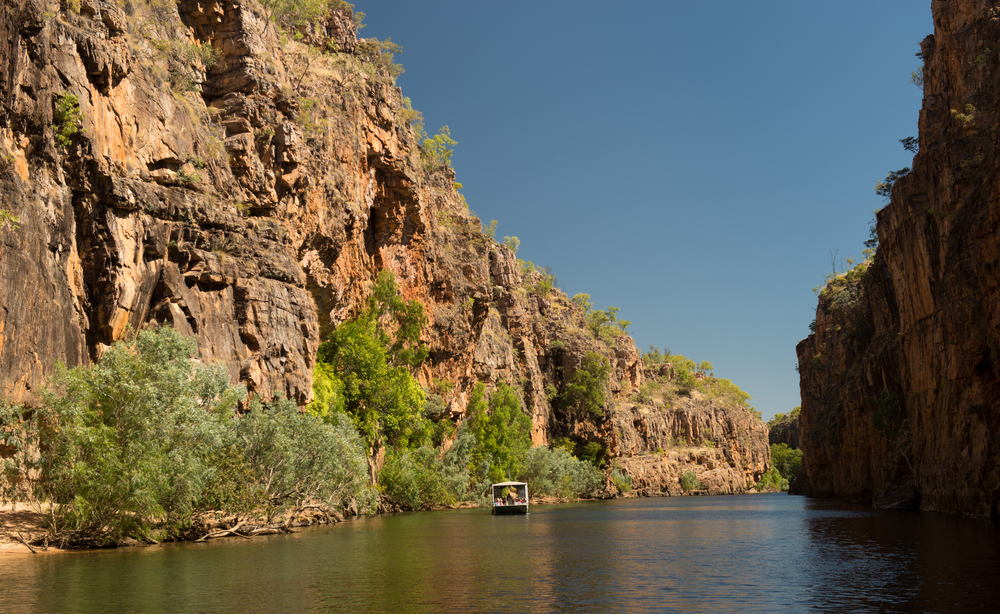 Our first stop was at the Park’s Nitmiluk Visitor Centre to find out about the cultural and spiritual significance of the gorge from its traditional owners, the Jawoyn and Dagomen people. There are many Aboriginal rock art paintings on sandstone walls throughout the gorge system, some of which are thousands of years old. You may even see a crocodile or two in the cool waters, but there are some safe water holes to swim in! 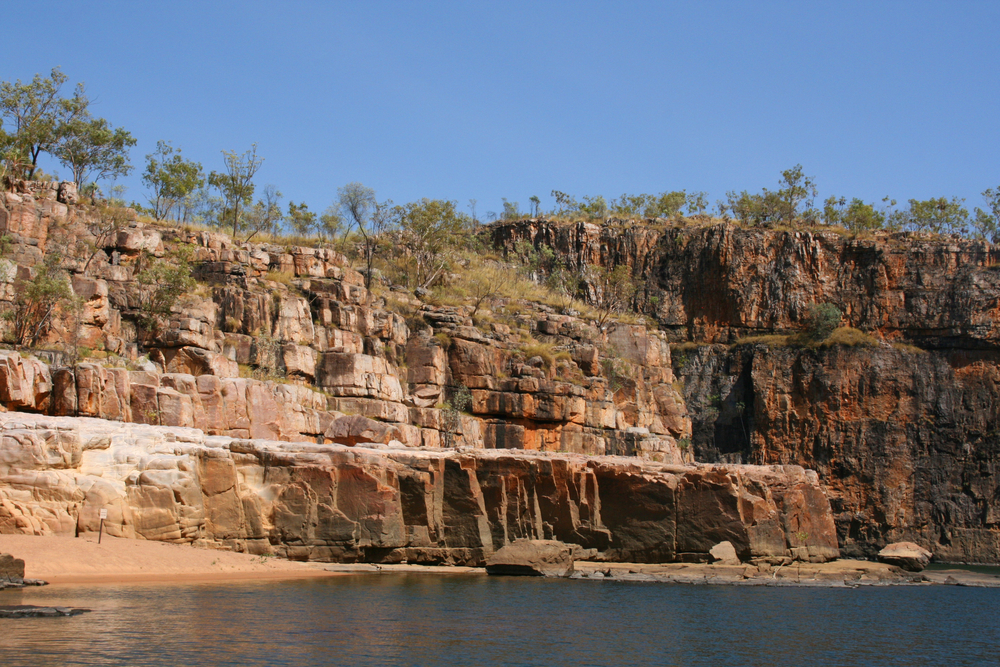 The Sandstone Escarpments of Katherine Gorge

After a very interesting four hours exploring Katherine Gorge we boarded the train for the last leg of our trip to Darwin. We arrived in Darwin early evening and deboarded the train, for the luxury of a hotel room for the night.

After a lovely nights sleep in a comfortable bed in a hotel we set off very early the next morning on a tour to Adelaide River and Litchfield National Park. En route to Adelaide River we stopped at a crocodile farm where I got to hold one of these little ‘snappers’. Thankfully his jaw was taped shut securely! I found his skin was quiet soft to touch. 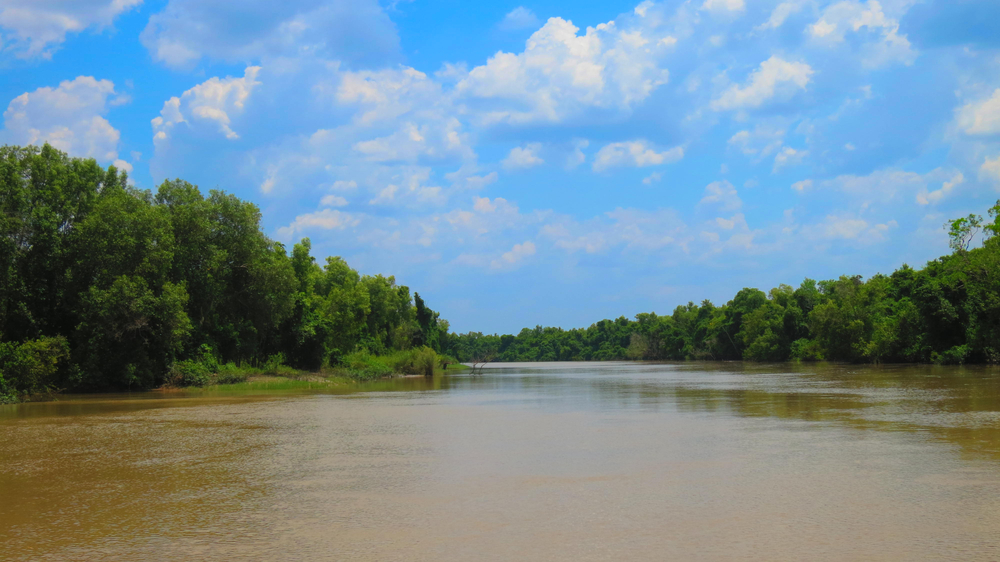 The Croc infested waters of the Adelaide River

We got aboard an aluminium boat at Adelaide River and cruised down the river trying to spot some crocs in the murky waters. The tour leader used a pole with a piece of meat for bait on the end of it to lure a crocodile towards the boat. Before we knew it a huge saltwater crocodile, that have been spotted as big as 5.5 metres in length, leapt out of the water and took the bait. It was not only a thrilling sight but quiet frightening to see these pre-historic beasts in the flesh! 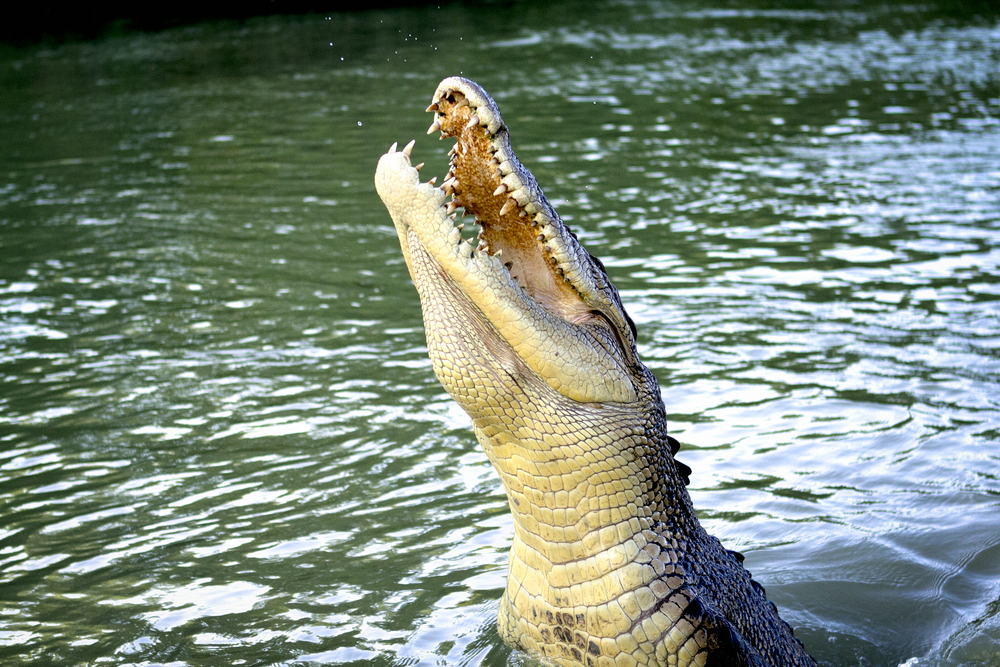 A Jumping Croc in the Adelaide River

Onwards to Litchfield National Park where we explored the thundering waterfalls, the pandanus-lined pools, the walking tracks, rainforests, historic sites and the huge termite mounds. The waterfalls at Wangi, Tolmer and Florence Falls are amazing. Here we enjoyed a swim right under the waterfalls in the cool refreshing water and later on a wallow in the cascading waters and rock pools at Buley Rockhole. 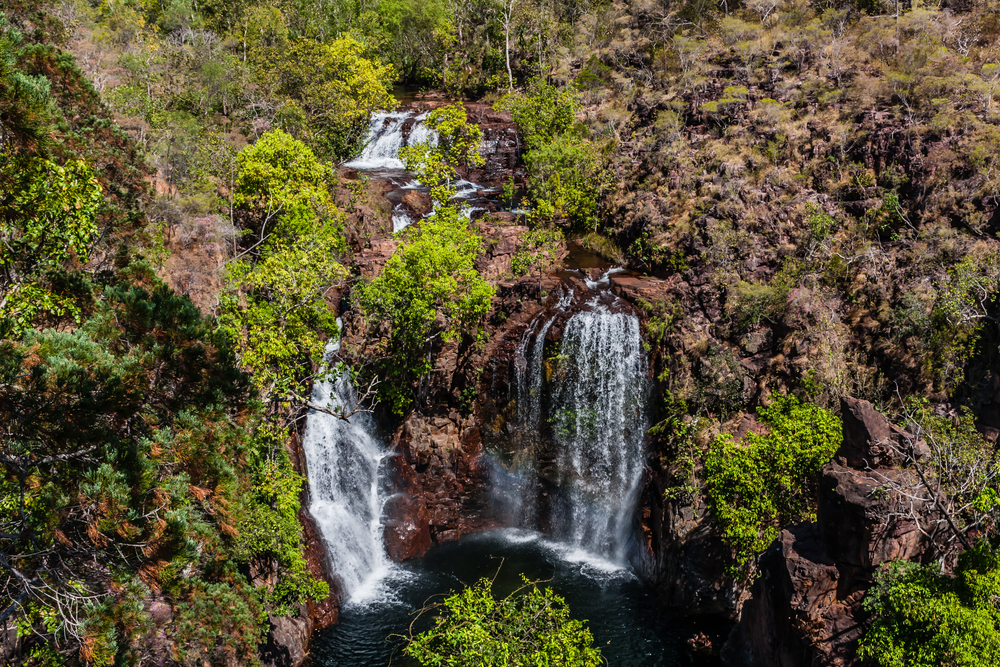 We learned about the intriguing lives of the termites and how they build these huge termite mounds. There was so much to do and see in the national park that half a day did not even make a small impression of what’s available. 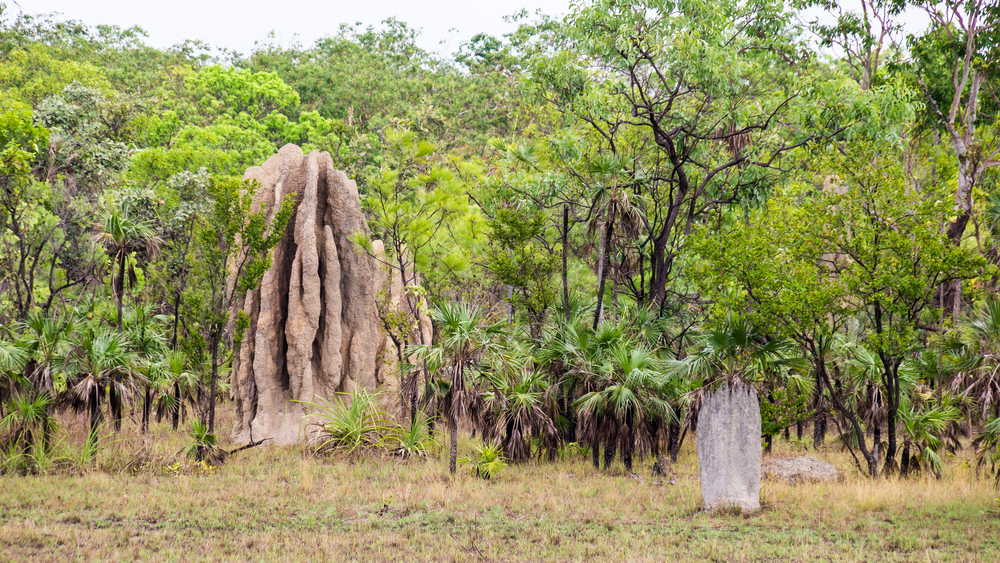 And so our day tour ended in Darwin at a beachside park with a lovely glass of champagne and a delicious feast of fresh prawns. I couldn’t think of a better way to end the day than watching the spectacular sunset over the sea. 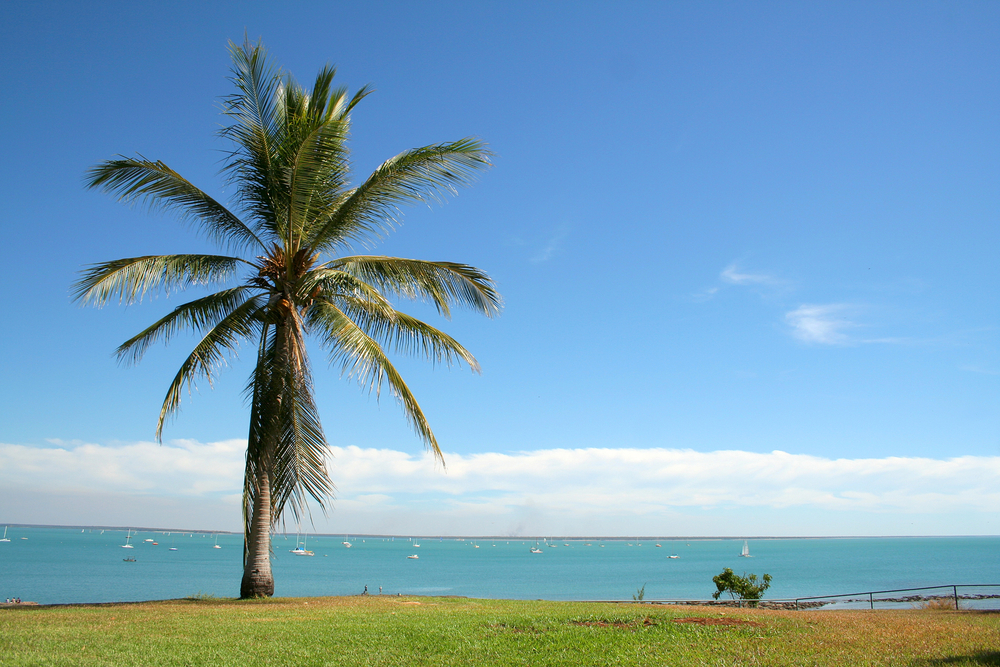 Darwin I would describe as a very modern and vibrant city with great accommodation, restaurants and shopping. Amongst the many things to do in Darwin you can go to a crocodile farm, visit the Museum and Art Gallery of the NT, Fannie Bay Gaol, Aviation Heritage Centre, East Point Military Museum and the WWII Oil Storage Tunnels. It is a city that played a very significant part in the defence of our country amid Japan’s invasion during World War II. 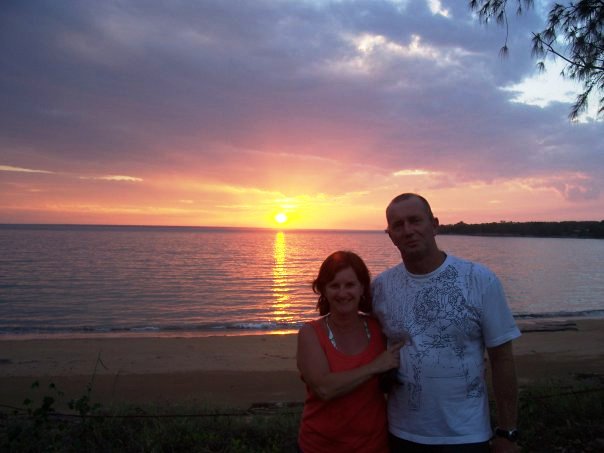 The areas around the harbour are beautiful and there are many marinas with great shops and restaurants that you can visit. The waterfront of Darwin is breathtaking of an evening – you can do a sunset yacht cruise in the harbour if you wish. 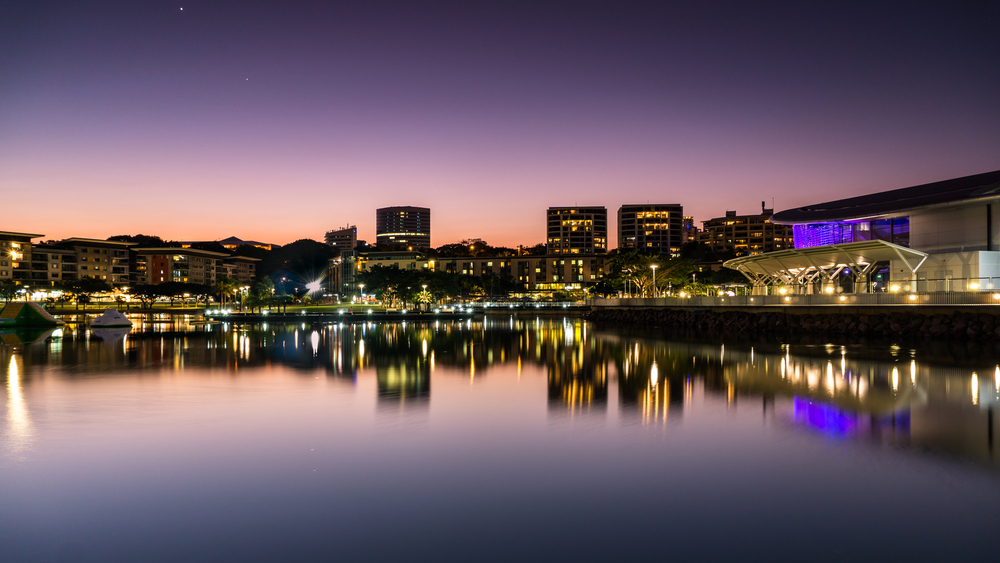 From Darwin you can wind through the Adelaide and Mary River wetlands to world heritage-listed Kakadu National Park. Here you can bushwalk through rugged escarpments and lush rainforest and discover a treasure trove of Aboriginal rock art. 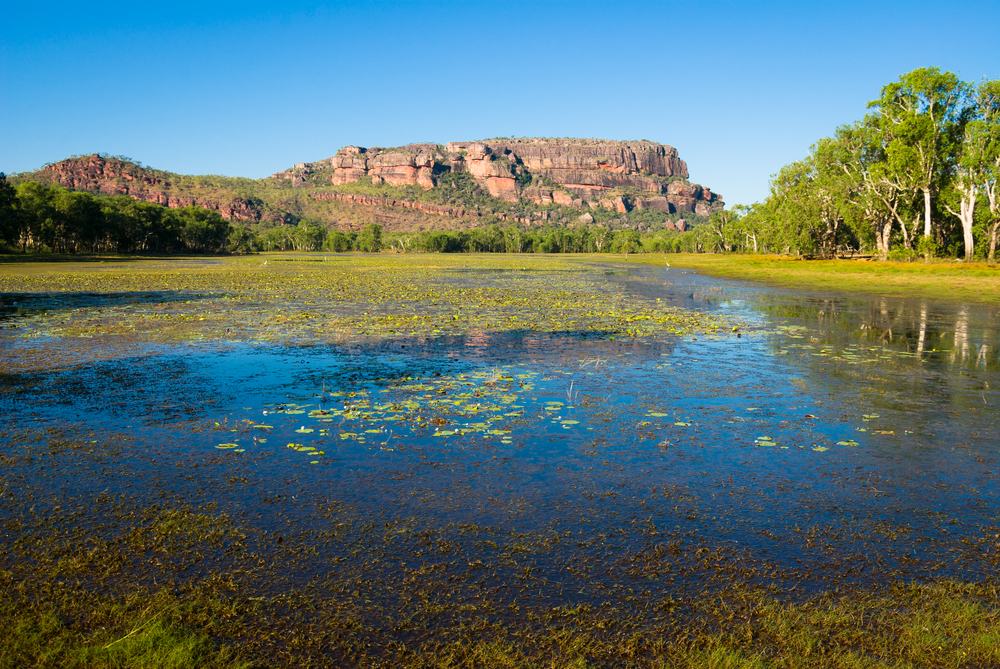 A Billabong in Kakadu National Park

Sadly our stay in Darwin was too short, but we vowed to return for a longer stay next time. We didn’t do our return trip by The Ghan train, but took a flight back home. However I would highly recommend The Ghan for a glimpse of what the centre of Australia has to offer.

Note: Since our trip on The Ghan 11 years ago we still haven’t returned to Darwin, even though we travelled to Katherine and through the Northern Territory on our around Australia caravan trip in 2014.

Spread the love
Alice SpringsAustralian outbackCentral-AustraliaDarwinKatherineNorthern TerritoryThe Ghan
By 50 Shades, May 15, 2018 Kathy was a 50 something year old when she started up this blog 6 years ago, but has since turned over another decade and is now in her early 60s. She is married with two adult children and lives on the Tweed Coast of New South Wales, Australia. Kathy enjoys living life to the fullest and loves to keep fit and active by maintaining a healthy diet and exercising regularly. Some of her interests include reading, photography, travelling, cooking and blogging! Kathy works part-time as a freelance writer but her real passion is travelling and photographing brilliant destinations both within Australia and overseas and writing about it.