Tracing The Murray River: The Sunraysia 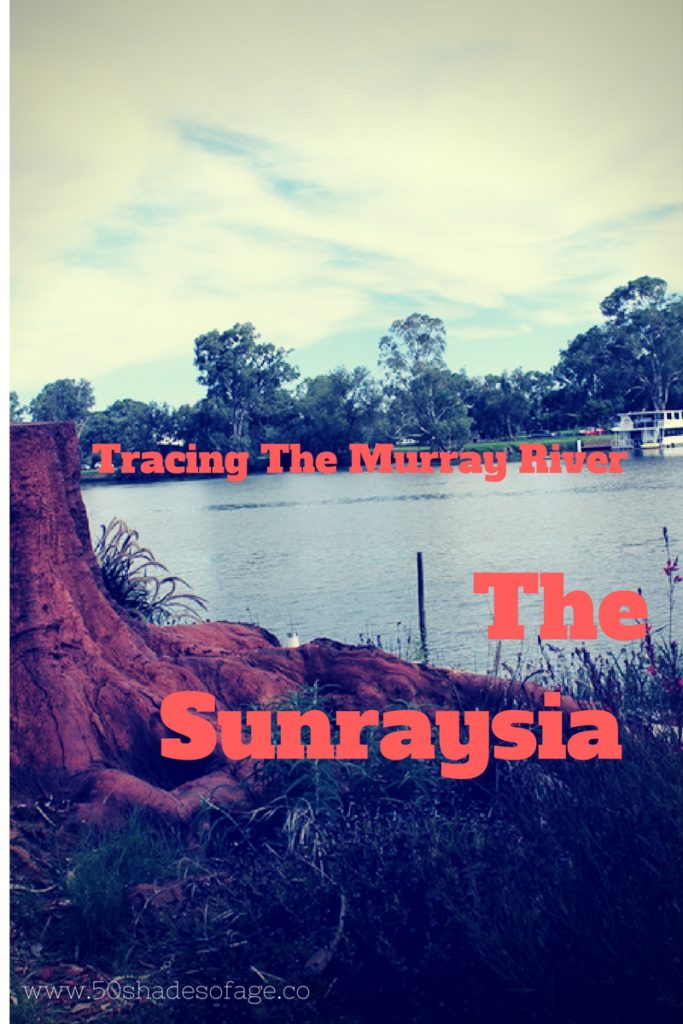 We left our camp spot right on the Murray River at Robinvale and meandered through vast areas of vineyards and the town of Robinvale before crossing the Murray River into Euston, New South Wales and onto the Sturt Highway. It was only a driving distance of 90 kilometres tracing the Murray River to the Sunraysia region, extending from Robinvale to Wentworth, with the main centre being the city of Mildura and our next destination.

The Murray River reaches one of it’s widest stretches for many kilometres at Robinvale/Euston. This means it is ideal for all sorts of water activities, such as fishing, boating, swimming, jet skiing and water skiing. 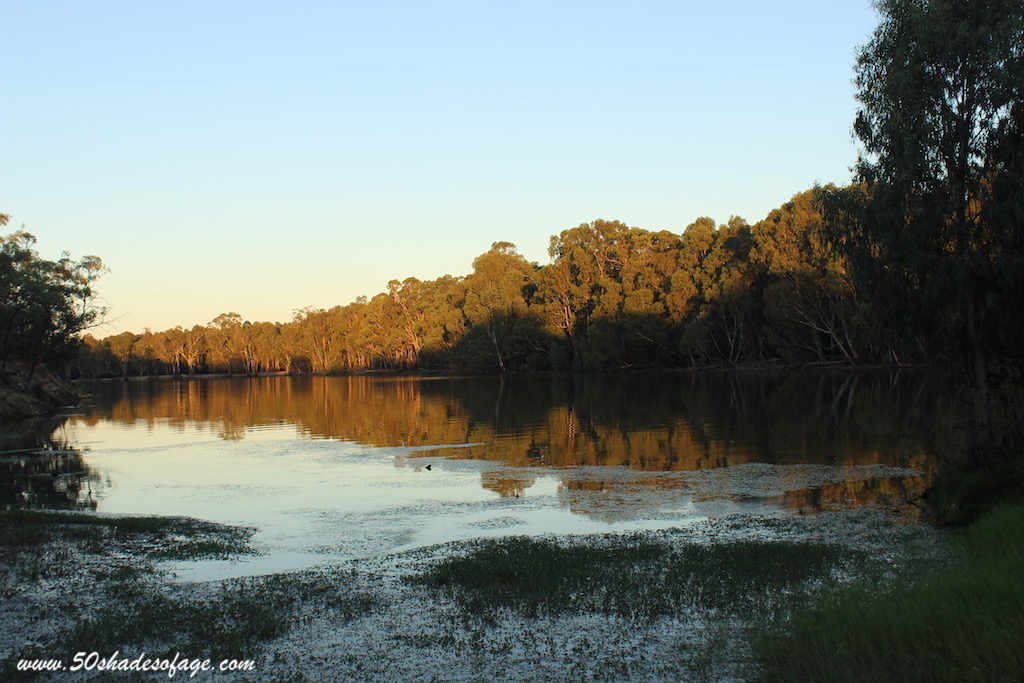 The Murray River at Robinvale

The thing that struck me the most driving through this region, was the vast amount of land utilised for farming fresh produce. There are plantings of olive groves, almond and pistachio trees, various grape varieties, avocado trees, citrus fruit and vegetables that all thrive in the rich Mallee soil of the region. We discovered that for farm gate sales sourced from the region, the Robinvale Estate offered a wide range of locally grown produce. 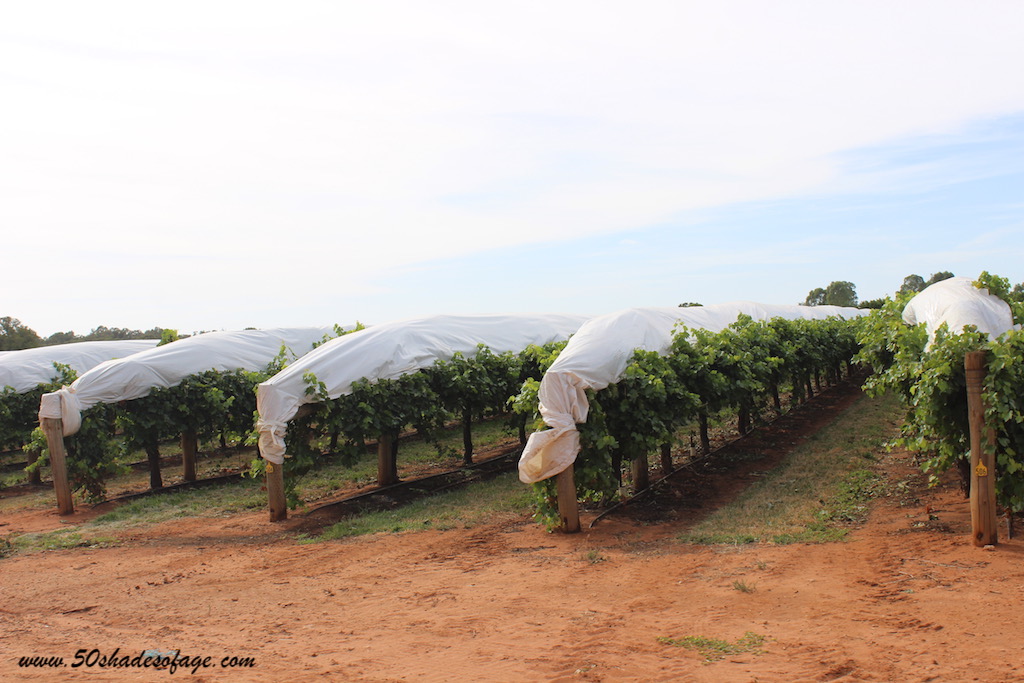 Rows of grapevines in Robinvale

From a historical point of view the must sees in the twin towns of Robinvale/Euston are the Robinswood Historical Homestead, the Villers-Bretonneux Archway, the Rural Life Museum and the old Courthouse of Euston housing the Euston-Robinvale Histoircal Society. 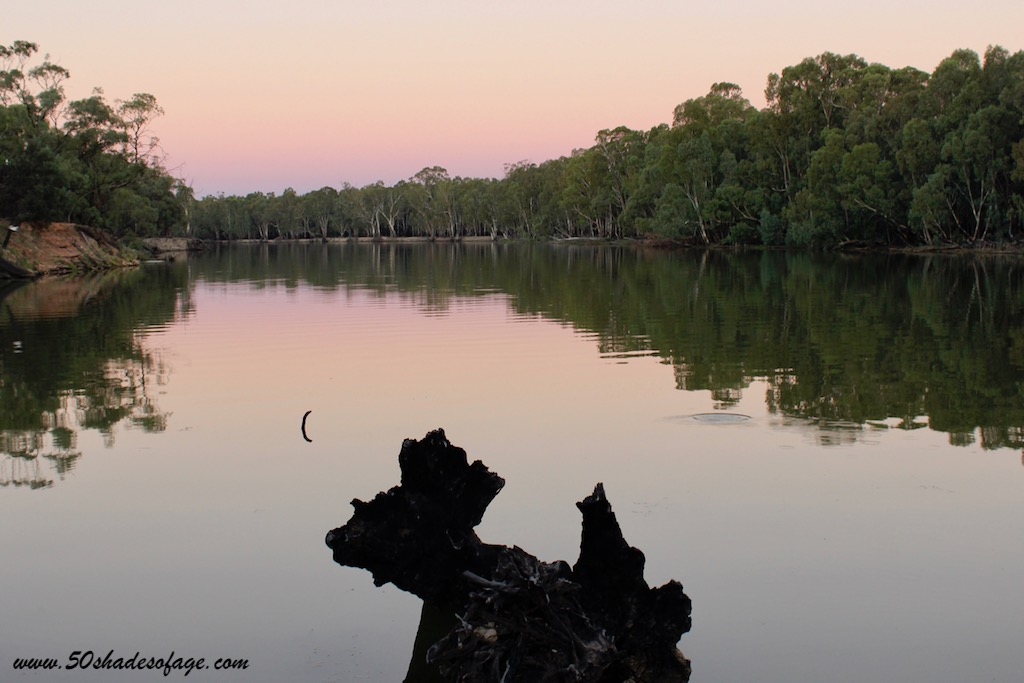 Sunset on the Murray River at Robinvale campsite

A short driving distance of 36kms east of Robinvale is the sweeping bend of the Murray River known as Boundary Bend. It is an extremely popular camping and boat launching spot and a great place to stop for the views or even a night or two. 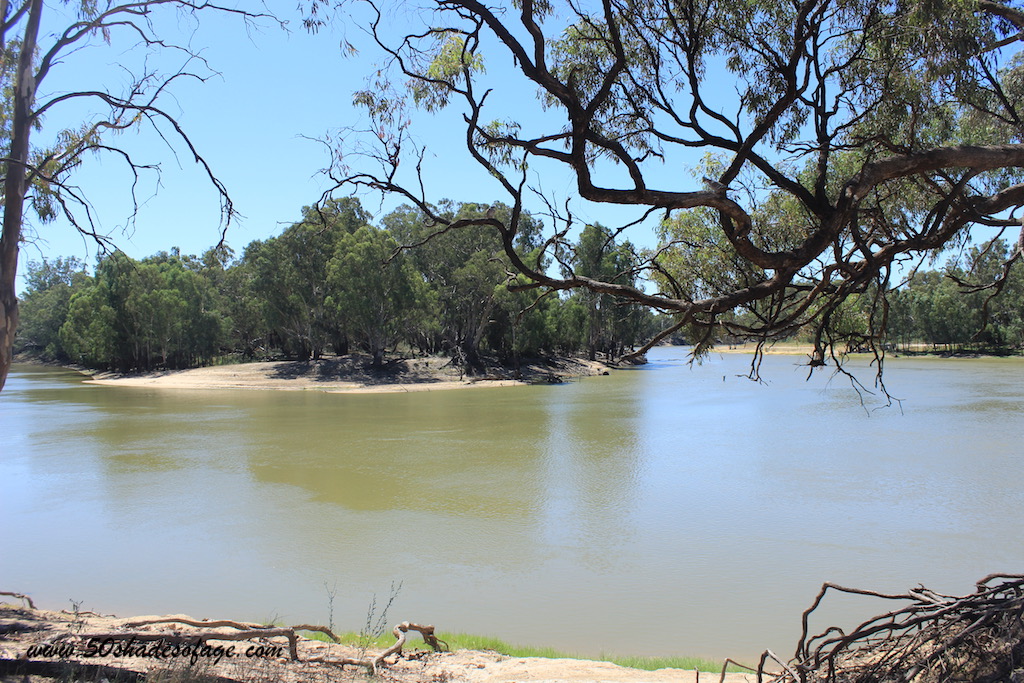 The sweeping bend of the Murray River at Boundary Bend

During the Second World War, my Grandfather lived in Mildura and grew vegetables for the Australian Defence Services. My Dad, who is now 87 years old, attended school in Nichols Point and still keeps in contact with his mate that he went to school with. Growing up I spent a lot of my holidays in Mildura and have very fond memories of the place, for very good reasons, because the city of Mildura is extraordinary. 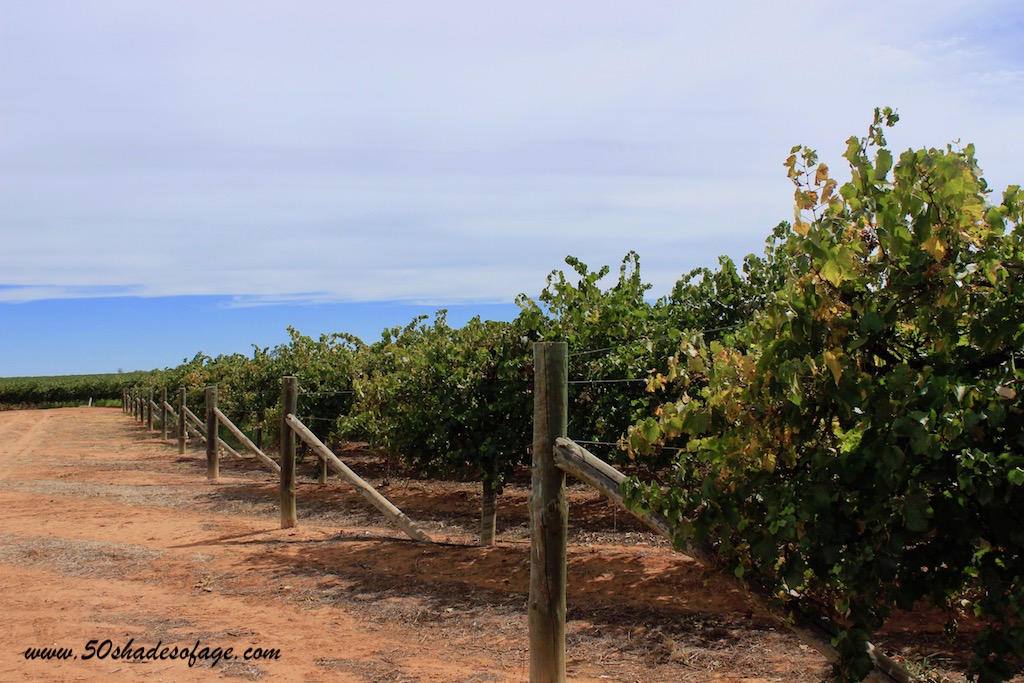 Grapevines that go forever and red soil at Red Cliffs

Mildura was always like reaching the oasis in the middle of the desert for me, during our long drives from Bendigo in Central Victoria, because the drive was predominately through flat and boring terrain. However once you hit the outskirts of Mildura at Red Cliffs, it was like entering Tuscany in Italy with numerous vineyards, orchards and fields of vegetables forming a green patchwork on rich red soil throughout the region. 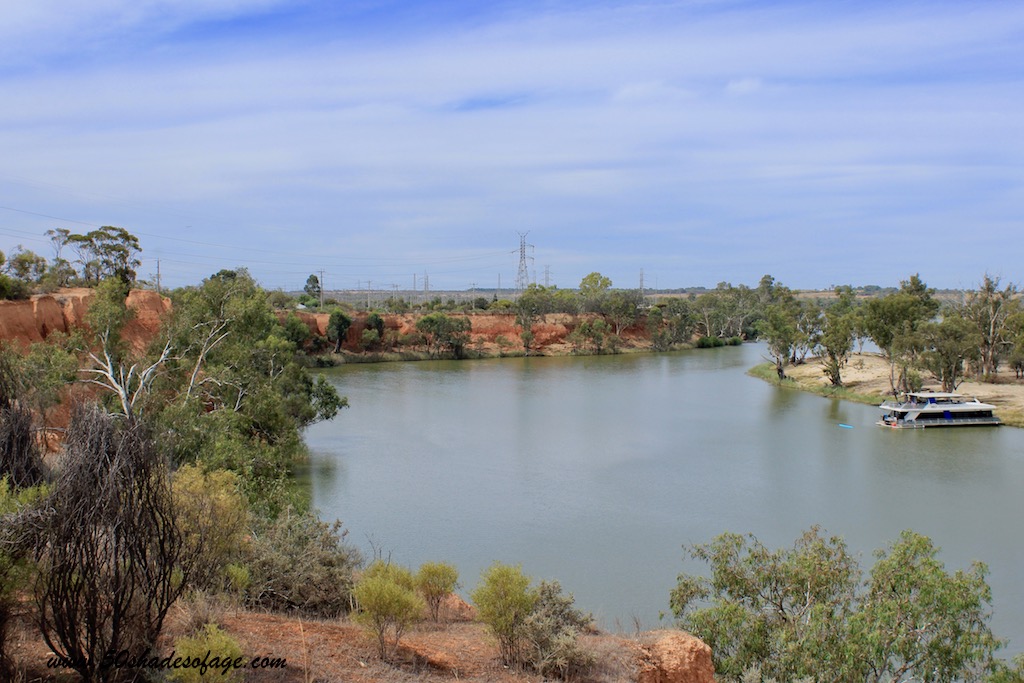 The red cliffs of the Murray River at Red Cliffs

But not only this, this Sunraysia capital sits upon the mighty Murray River and is teeming with houseboats and other forms of watercraft. Plus it has a thriving modern CBD, not far from the riverfront that is sophisticated and cosmopolitan in every way. The banks of the Murray River have been transformed into beautiful parklands, sporting facilities, trendy cafes, a marina and walkways that would rival South Bank in Brisbane. 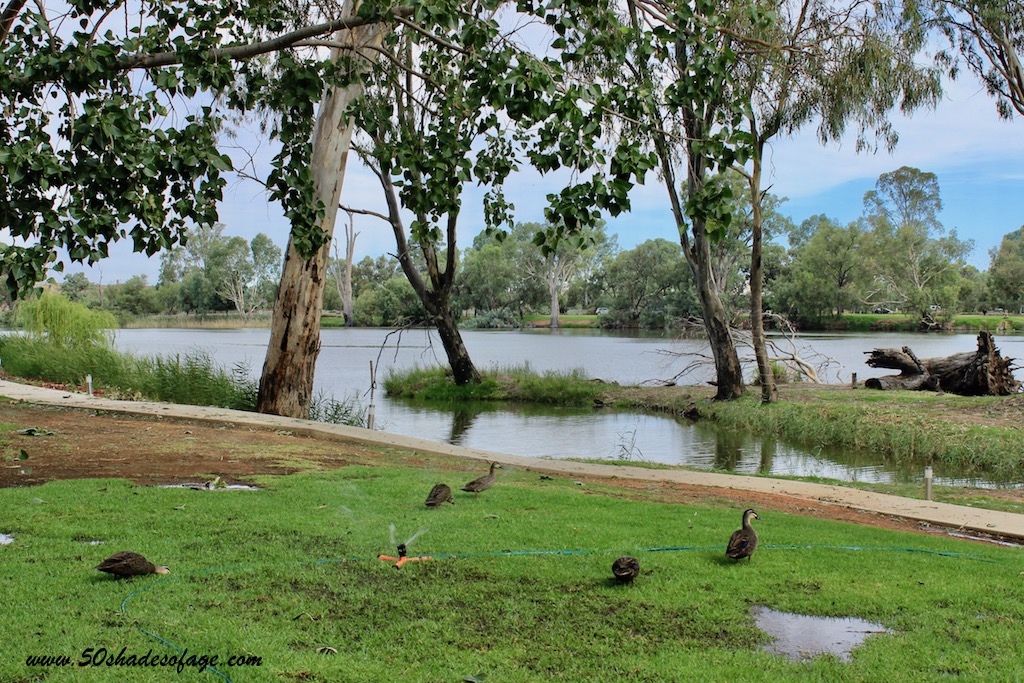 River views from our caravan park at Buronga 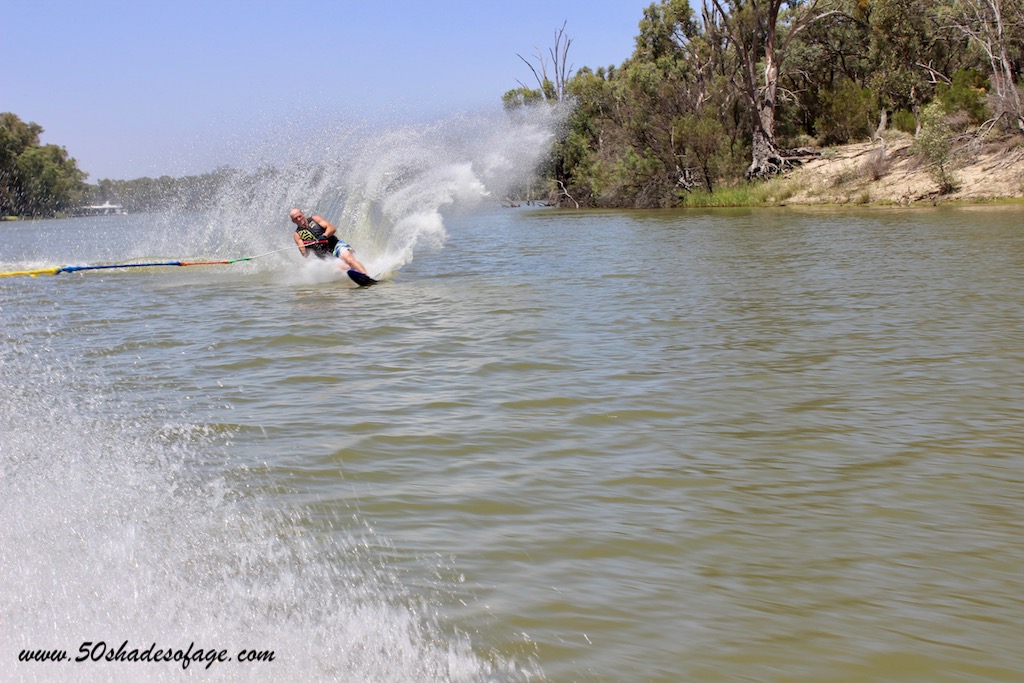 A water skiier on the Murray River at Mildura

We based ourselves at Buronga Riverside Caravan Park for three days so that we could take in all that this fantastic city and region has to offer. Here’s what we covered during our stay:

One of the highlights of our stay in Mildura was a catchup with a high school friend who I hadn’t seen in 27 years at her property in Irymple. We were treated to a gourmet meal, some fine wine and a gift bag of local goodies to take away with us. It was such a special and memorable night.

We reluctantly departed Mildura to continue our trip tracing the Murray River, to the historical town of Wentworth, located at the confluence of the Murray and Darling Rivers. The township retains a rich history, being a bustling inland river port in the late 1880s. 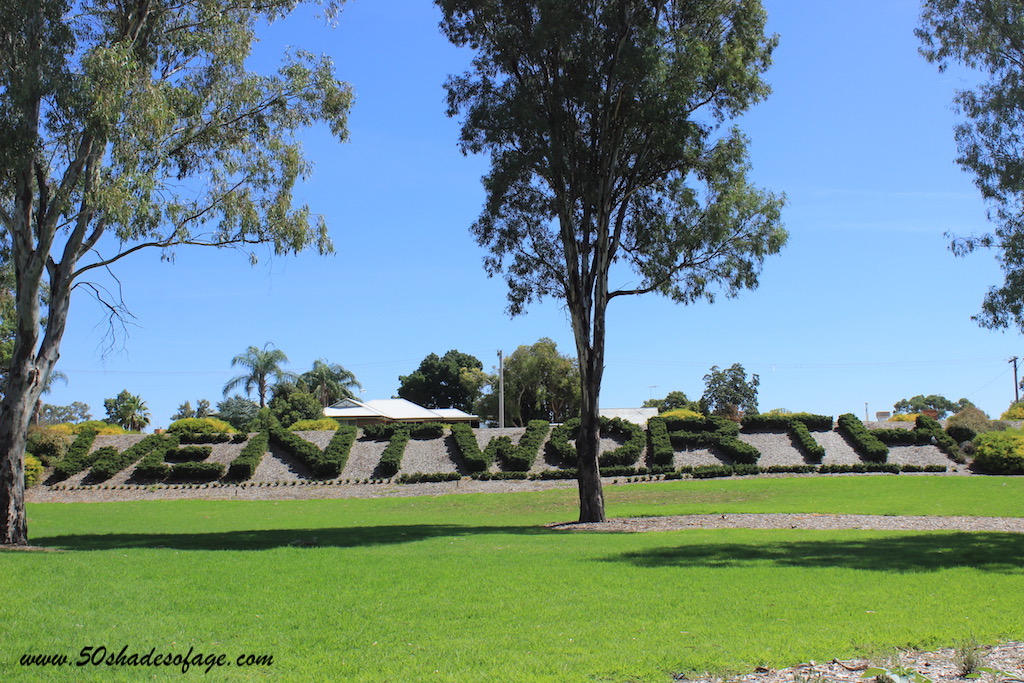 We immediately visited the point where the two rivers merge – the Darling and Murray Rivers, where there is an observation tower you can scale for a better look at the merging rivers. The area around is landscaped in lovely parklands with an interesting “Wentworth” sign made out of green hedging plants. 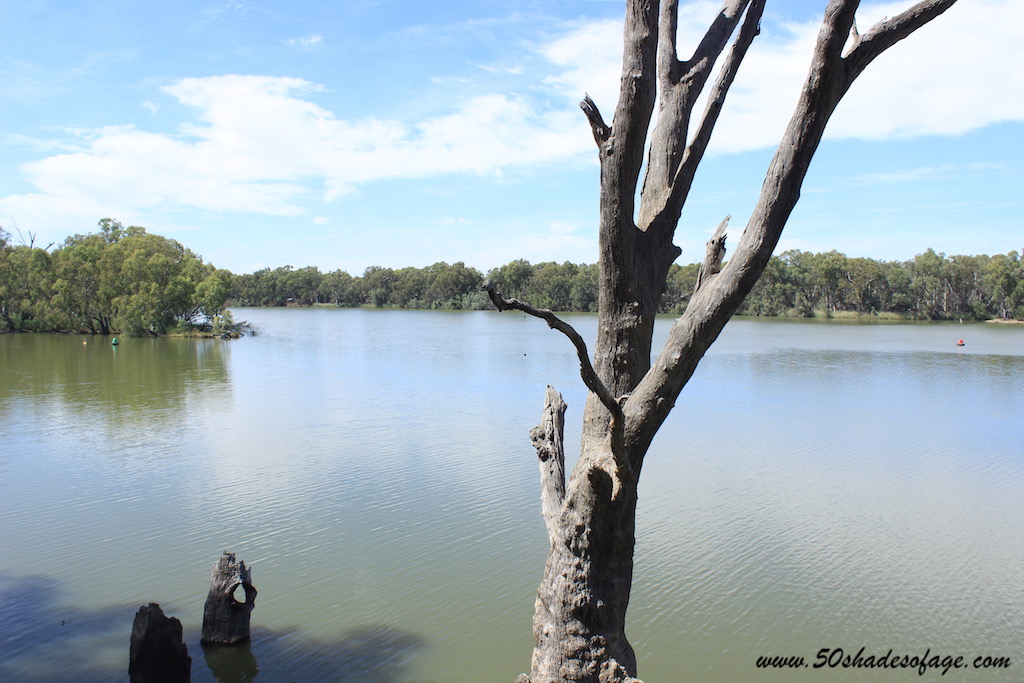 The confluence of the Murray and Darling Rivers

Near the bridge that crosses the Darling River there is the old wharf with the Captain John Egge Memorial statue. Across the river is Fotherby Park that houses a range of pioneer heritage items, including a log homestead, steam powered machinery and the iconic “grey Fergie” tractor. The old P.S. Ruby paddle steamer is also moored here – Wentworth’s original flagship. 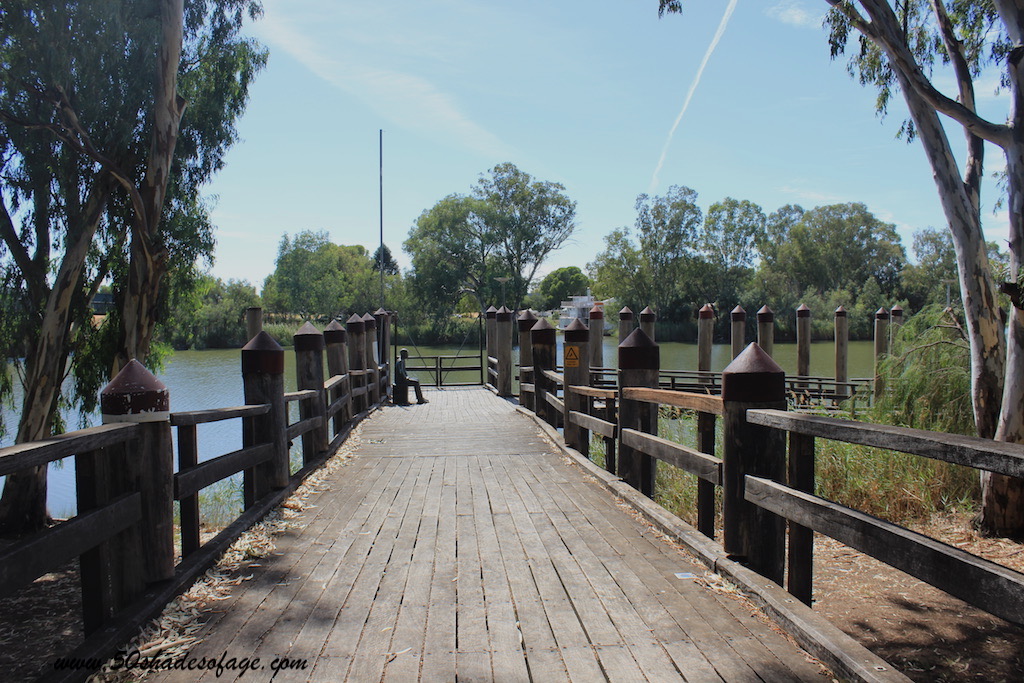 The old Wentworth Wharf on the Darling River

Last but not least, we visited the old Wentworth Gaol, the most well-known building in Wentworth that dates back to 1881. We toured through the gaol and adjoining prison warden’s quarters that is now a museum full of interesting historical artefacts. The gaol gave us a good insight into the hardships and struggles of early colonial times in Australia. 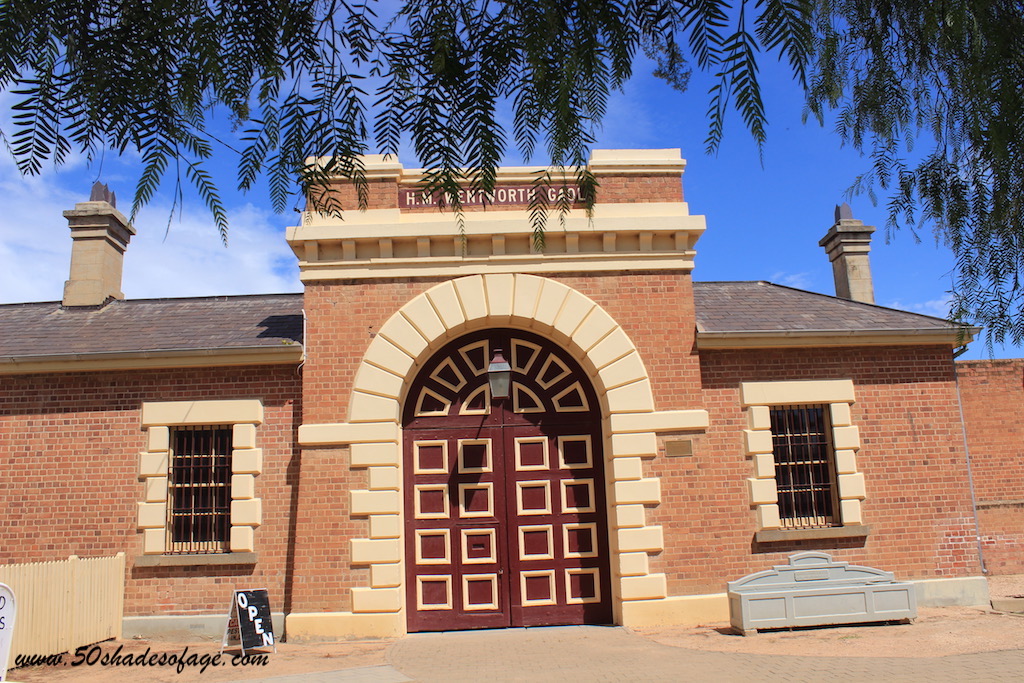 From drifting aboard a Murray houseboat, to enjoying local wines and farm fresh produce, taking in the river vistas or exploring the historical buildings and natural wonders, the Sunraysia region has something for all. From my point of view it brought back pleasant childhood memories of visiting this region and from my husband’s point of view, being a first time visitor, he gave it a ten out of ten. We both agreed that it had been an extraordinary four days. Maybe even the biggest highlight of our trip down the Murray!

Spread the love
Discover Murray RiverMilduraMurray RiverRobinvaleThe SunraysiaWentworth
By 50 Shades, March 19, 2018 Kathy was a 50 something year old when she started up this blog 6 years ago, but has since turned over another decade and is now in her early 60s. She is married with two adult children and lives on the Tweed Coast of New South Wales, Australia. Kathy enjoys living life to the fullest and loves to keep fit and active by maintaining a healthy diet and exercising regularly. Some of her interests include reading, photography, travelling, cooking and blogging! Kathy works part-time as a freelance writer but her real passion is travelling and photographing brilliant destinations both within Australia and overseas and writing about it.