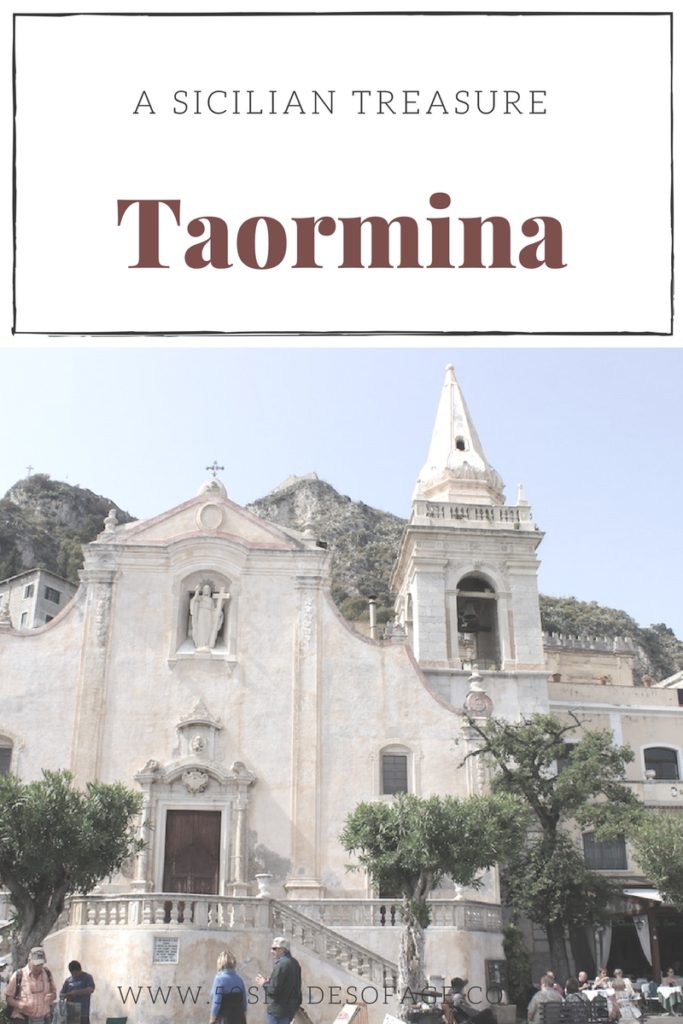 After three very busy days of seeing the sights of Rome, we caught a train to the port of Rome at Civitavecchia to embark on our 12 day Mediterranean Cruise. It was all aboard at noon and we set sail that evening only to wake up the next morning cruising past the island of Stromboli with smoke rising from its active volcano, and then to our first port of call, Messina in Sicily. Once we got off the ship we jumped aboard a guided mini-bus tour to the tourist village of Taormina: a Sicilian treasure.

The interesting fact about Messina is that the city was almost entirely destroyed by an earthquake and associated tsunami in 1908, killing about 100,000 people and destroying most of the ancient architecture. So there wasn’t much use in sticking around this city, and not because it wasn’t interesting, but we wanted to see the “real” Sicily. 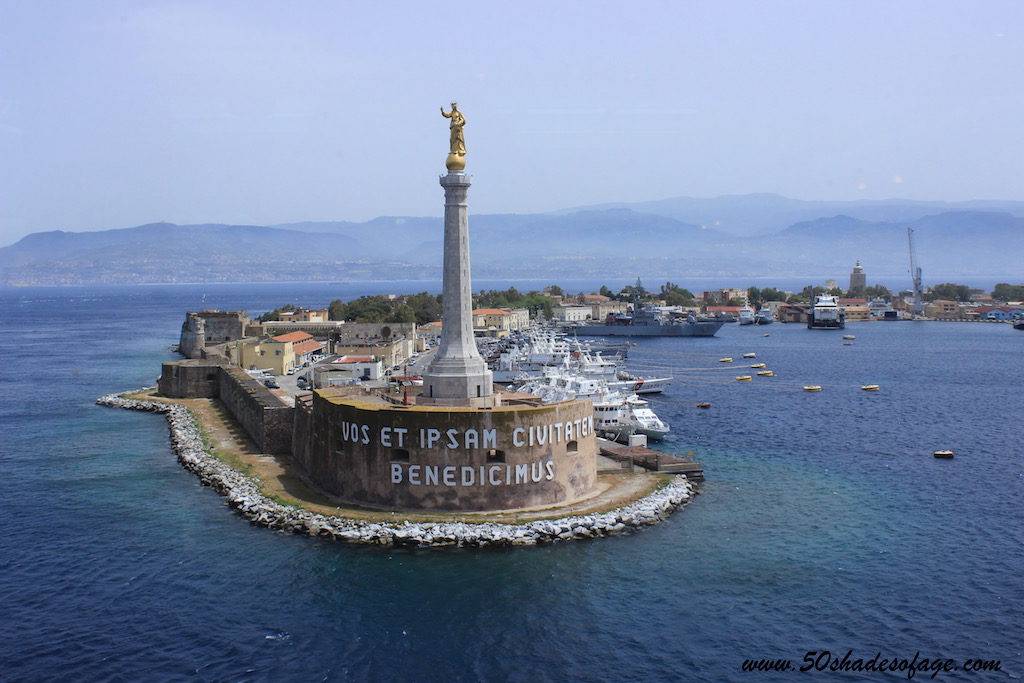 Entrance to the port of Messina

Taormina is 53 kms from Messina across hilly terrain and through road tunnels that have been forged into the mountains. Eventually we came out of the tunnels, which seemed to go on forever, to catch glimpses of the rugged coastline, azure blue sea and coastal villages. We then climbed up a steep, narrow winding road up Monte Tauro and to the tourist village of Taormina. Now if this name sounds familiar, Taormina recently hosted the G7 Summit and as we approached the village you could see they were getting ready for this event which took place in late May. 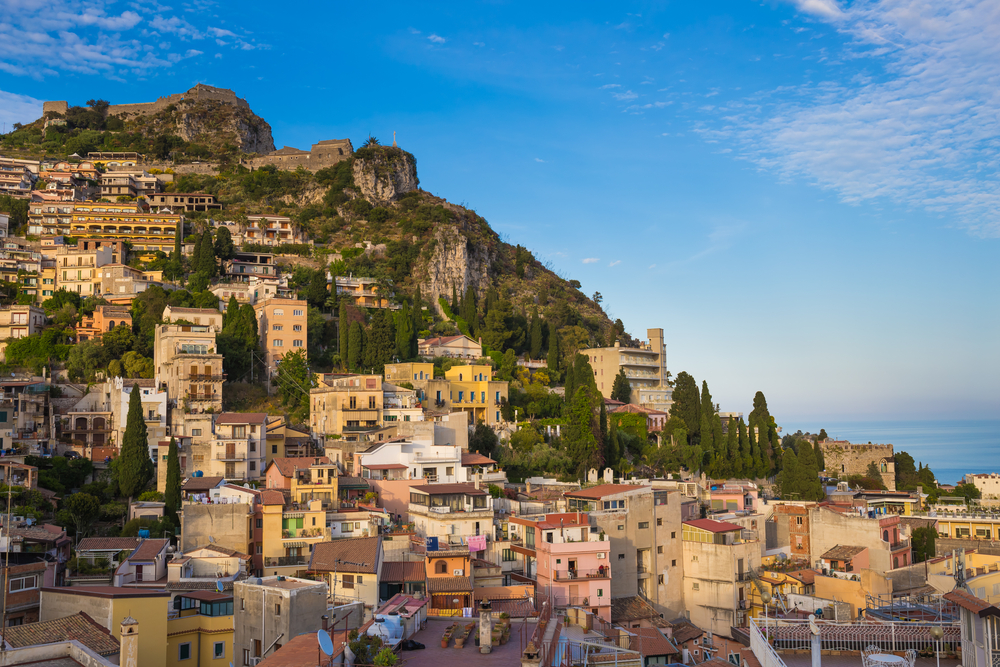 Settled on a hill,  Taormina overlooks two grand, sweeping bays below and on the southern side, the top of Mount Etna, Europe’s highest active volcano. From the village you are afforded the most breathtaking, dramatic and memorable views over the Mediterranean Sea. 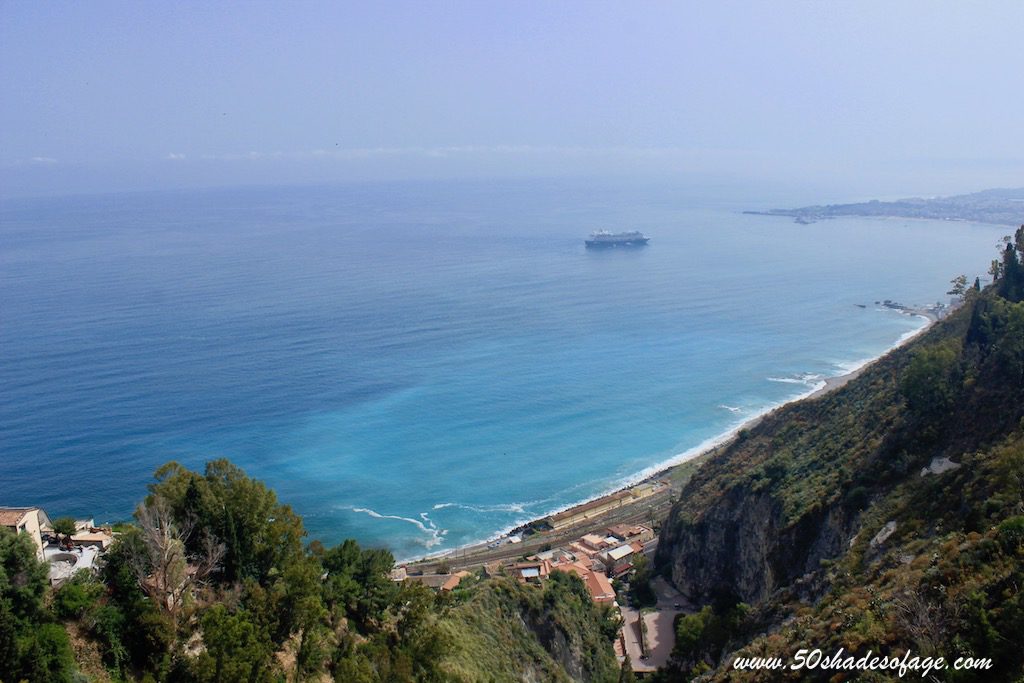 Views over the sea from Taormina

Everywhere you go in Sicily you will notice the symbol of Sicily known as the Trinacria or Triseklion. It is said to be derived from a myth about three nymphs, who danced all around the world gathering the best fruit, stones and soil, who then threw all of it into the sea and created Sicily. I found this symbol, that also appears on the Sicilian flag to be rather mystical! 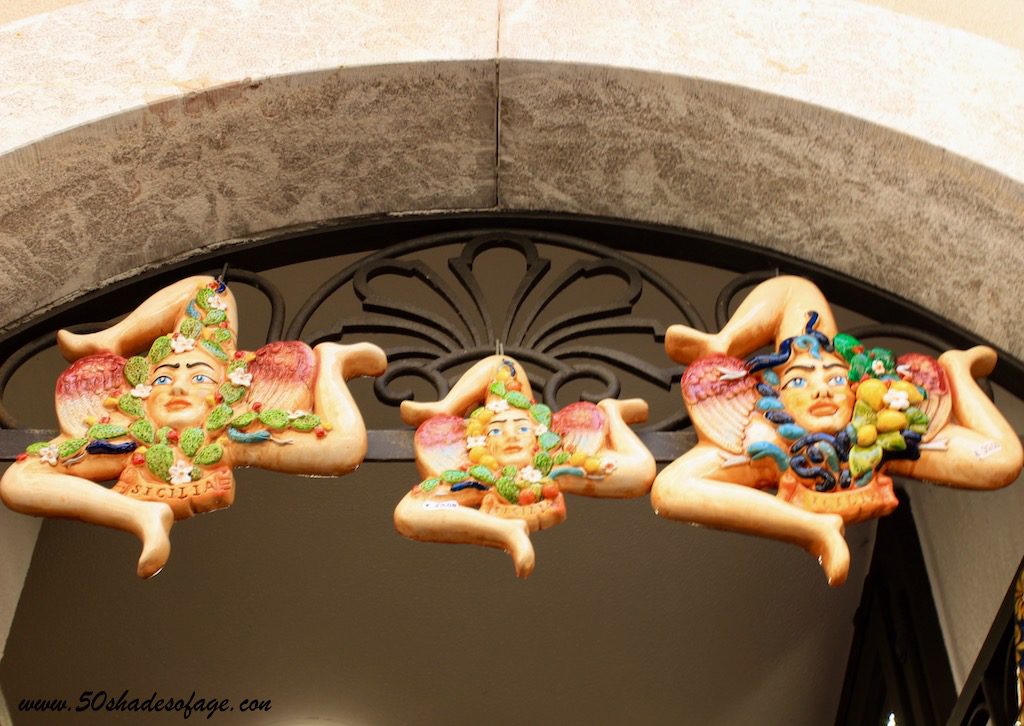 Trinacria – the symbol of Sicily

Going way back in time, Taormina was a thriving Greek and then Roman town. By the end of the 19th century this picturesque and ancient town became a popular tourist destination in Sicily. Famous visitors including Oscar Wilde, Richard Wagner and Tsar Nicholas II, all came to this medieval town for the views, the ancient ruins, the seaside, the town’s film festival, the outdoor theatre season, the fine hotels and restaurants. 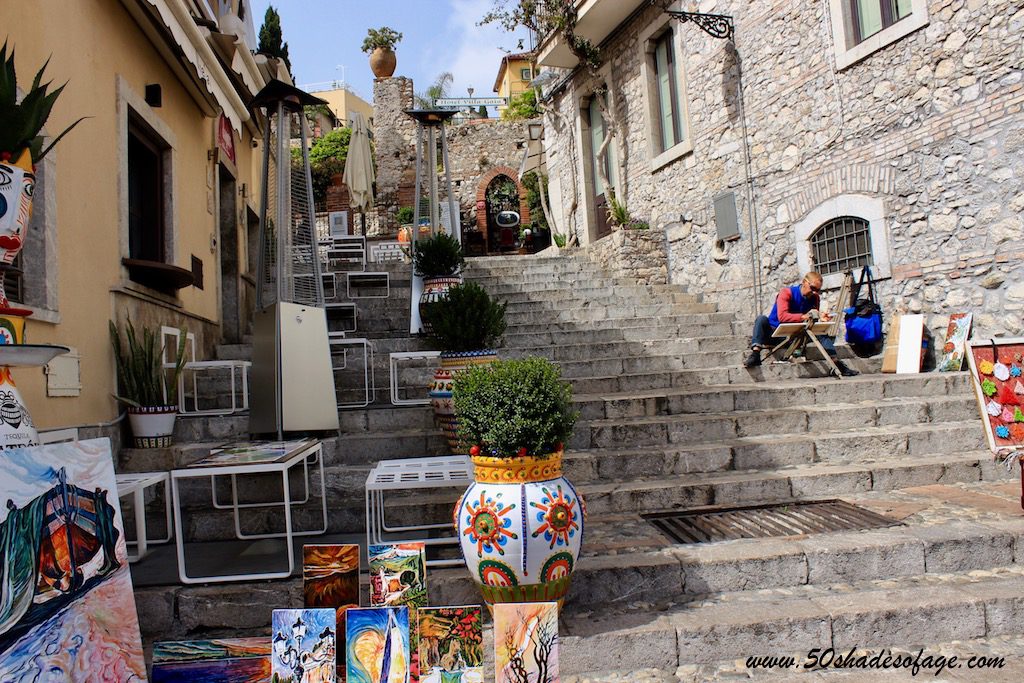 Wandering down the main thoroughfare, Corso Umberto I, you will notice its architecture is a hotchpotch of Arab, Norman and Gothic styles and includes towers, piazzas, churches, baroque fountains, mullioned windowed buildings and shady courtyards. All remnants of when ancient races like the Sicels, Greeks, Romans, Byzantines, Saracens, Arabs, Normans and Spaniards chose Taormina as a perfect place to reside thanks to its favourable position and mild climate. 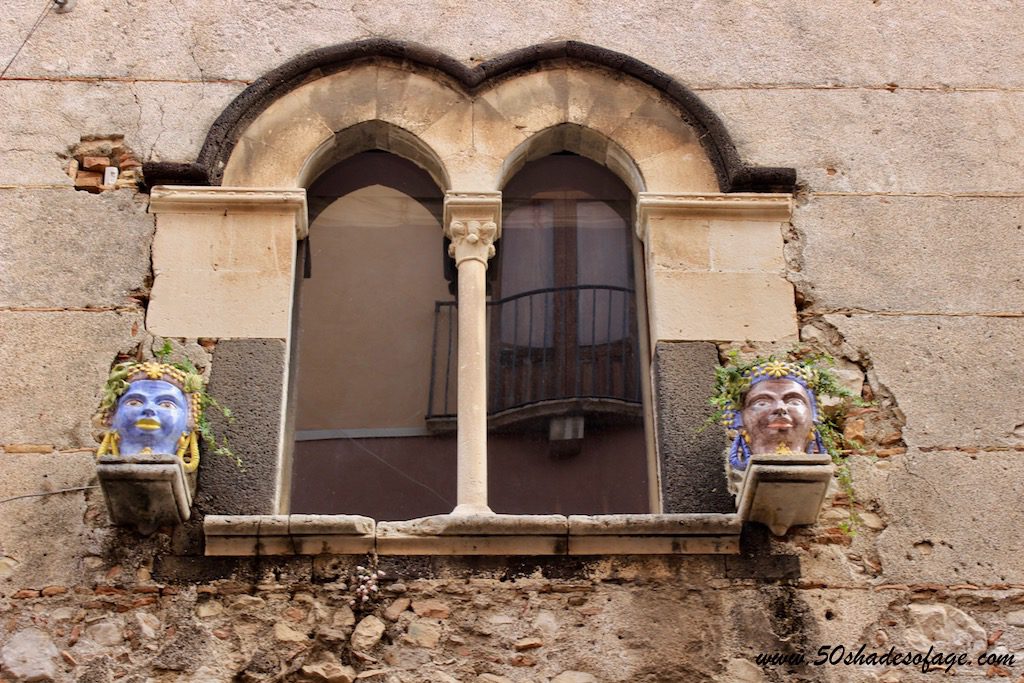 Gorgeous architecture in the ancient village of Taormina

Greek Theatre – with views to die for toward the Calabrian coast, the Ionian coast of Sicily and the imposing Mt Etna volcano, this Greek Theatre is probably the main tourist attraction of Taormina. Today it still hosts various forms of entertainment like theatre, concerts, the award ceremonies of the David di Donatell, symphonies, operas and ballets. 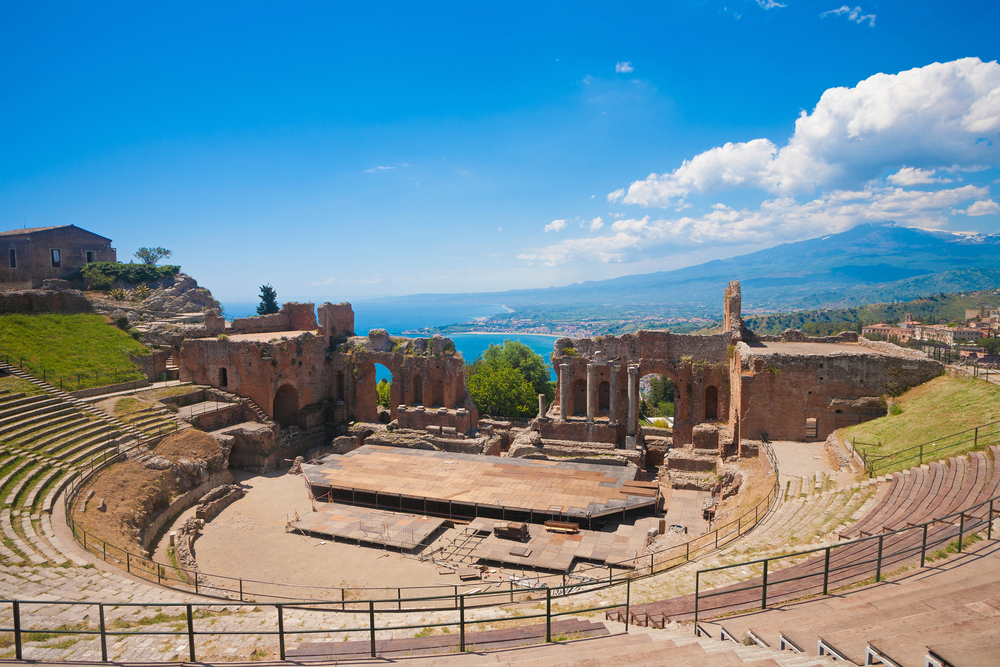 The Greek Theatre in Taormina 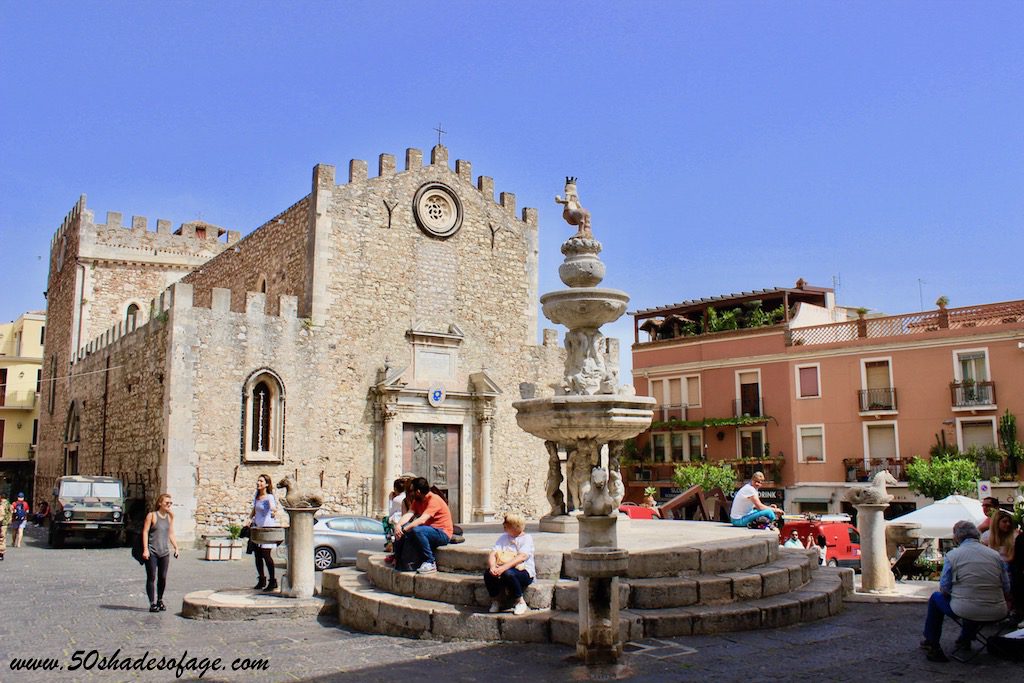 Palazzo Corvaja – This medieval palace dates back to the 10th century and was built by the Arabs (Saracens) who then ruled Taormina. From the 13th through to the 15th century it was added to with a various mix of architectural styles.  Today, the Corvaja Palace houses the tourist office and the Museo di Arte e Tradizioni Popolari, which has a collection of Sicilian puppets and folk art and crafts. 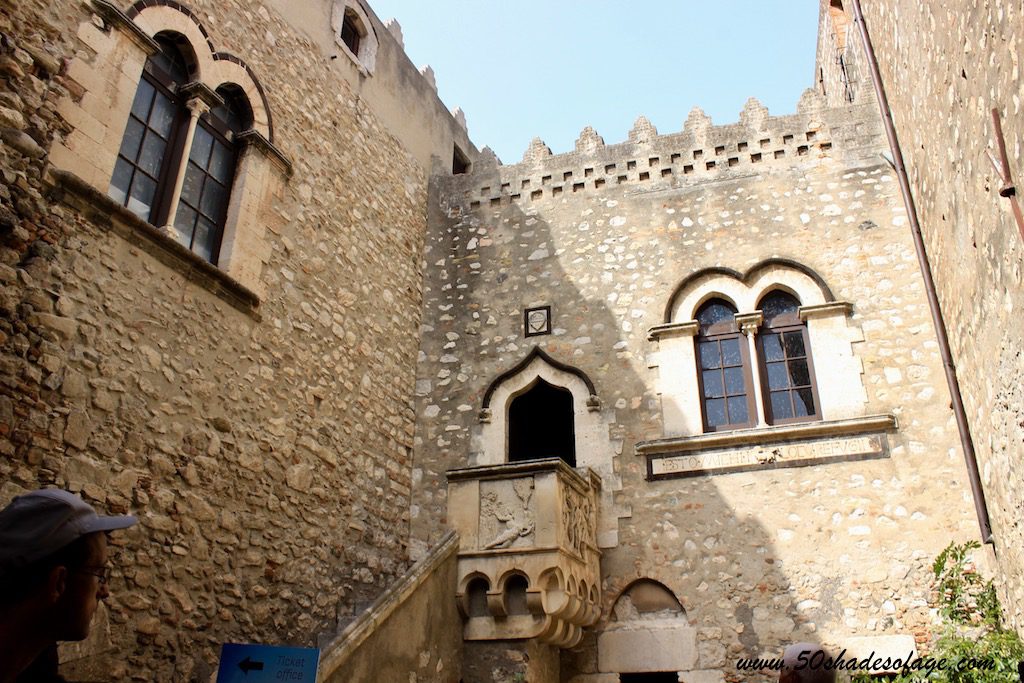 St Catherine’s Church – sitting adjacent to Palazzo Corjava, this church was built on the ruins of the Odeon, the remains of which can be seen behind the church. It was thought to date back to the 16th century consecrated to St. Catherine of Alexandria in Egypt. 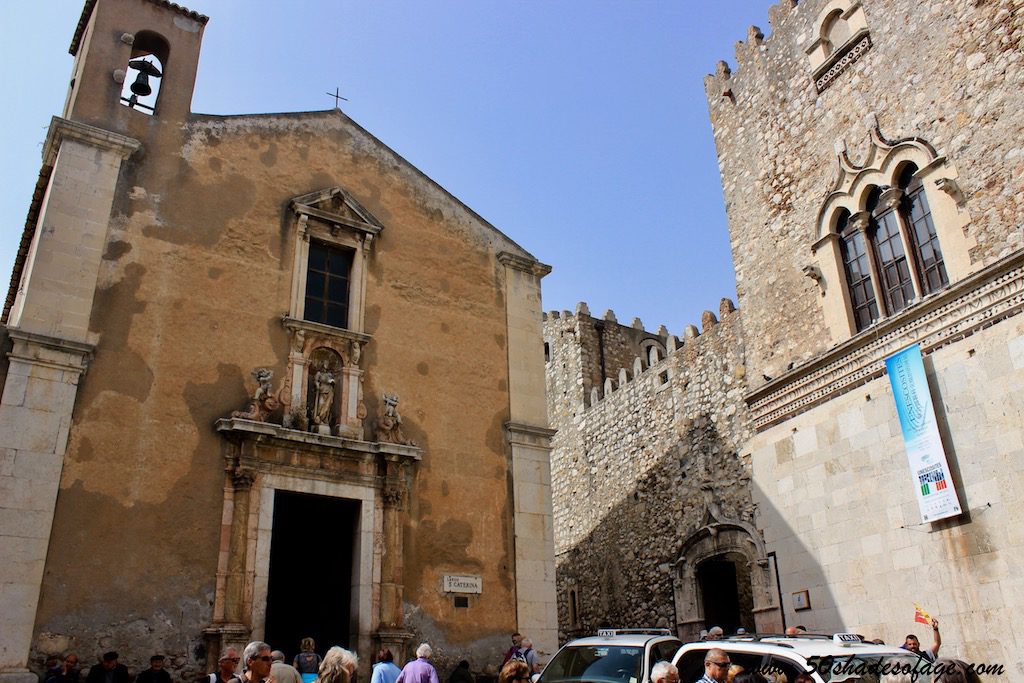 A little way down the steep road from the village of Taormina is a cable car that ferries tourists to and from the seaside resorts down along the coast. There are extensive beaches, rocky coves, tiny islands (such as Isola Bella) and sea stacks abound, making this a place a popular seaside resort town. 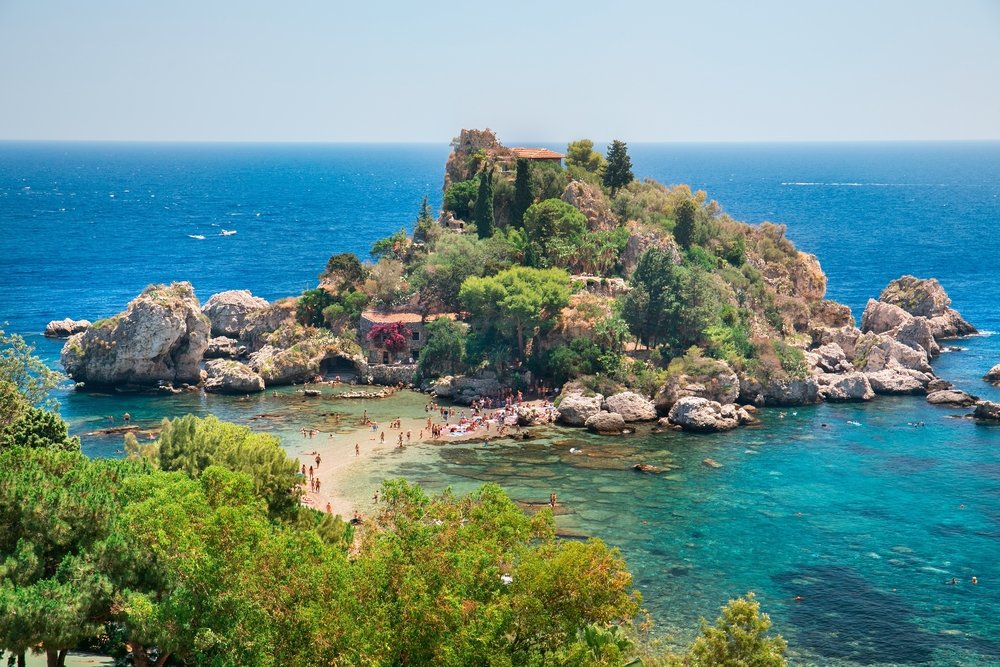 Isola Bella – a small island off the coast of Taormina

Wandering the Streets of Taormina

We spent hours strolling down the main cobblestoned street of Taormina or down narrow little laneways brimming with treasures, taking in the sights, the pretty shops and the vibrant atmosphere. The shops that line its main streets sell similar things – brightly coloured pottery, embroidered aprons and string puppets. But there are more upmarket shops selling hand-made leather goods and leading Italian fashion brands. 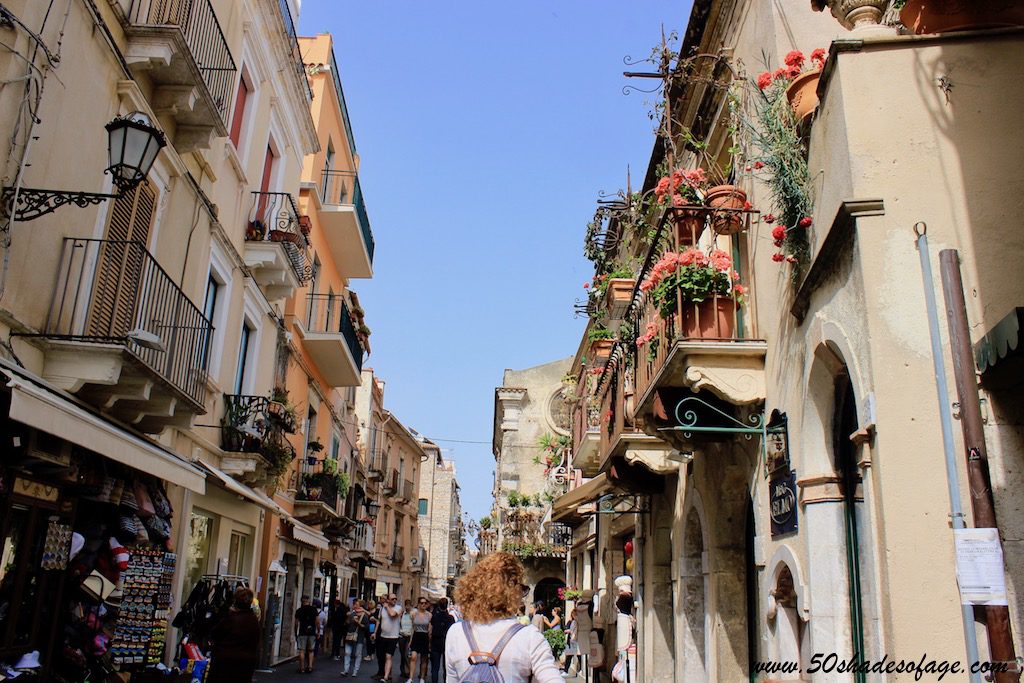 The main street of Taormina

Of course there are the al fresco dining establishments all trying to tempt you into their ristorantes and pizzerias. Shops and stalls are all selling distinctive foods that Sicily is renowned for – fresh citrus fruits, limoncello, olive oil, local Sicilian wines and the most delicious cannoli. 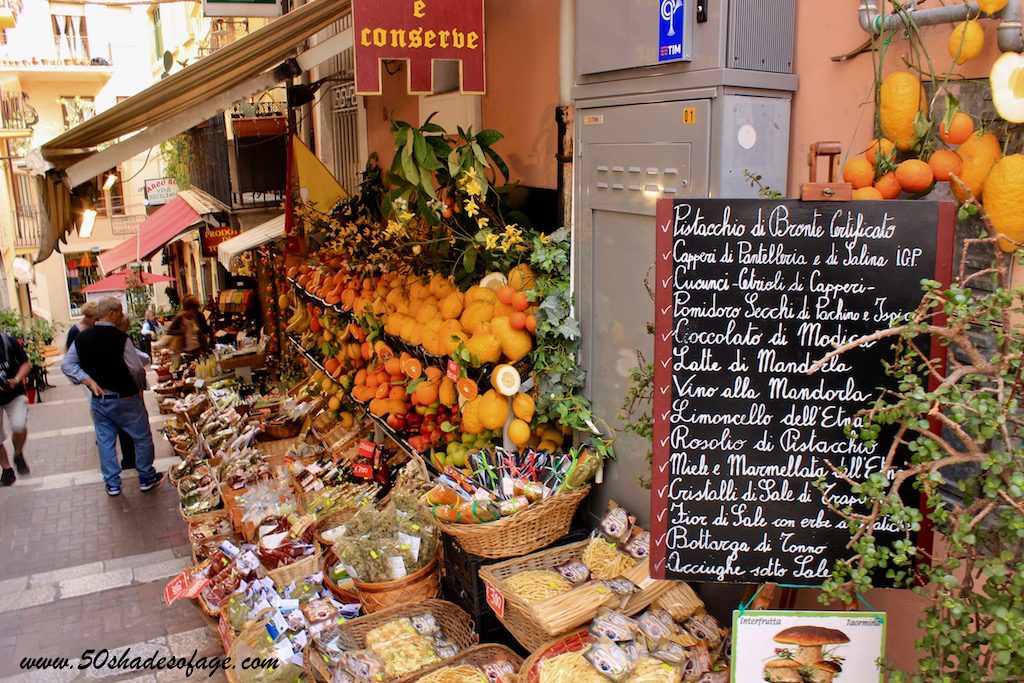 A selection of local fresh foods

In the main square of the village, where you get the most divine views over the coastline, there are crowds everywhere, artists sketching, puppeteers performing and authentic Italian musicians belting out their rendition of “Ole Sole Mio”. 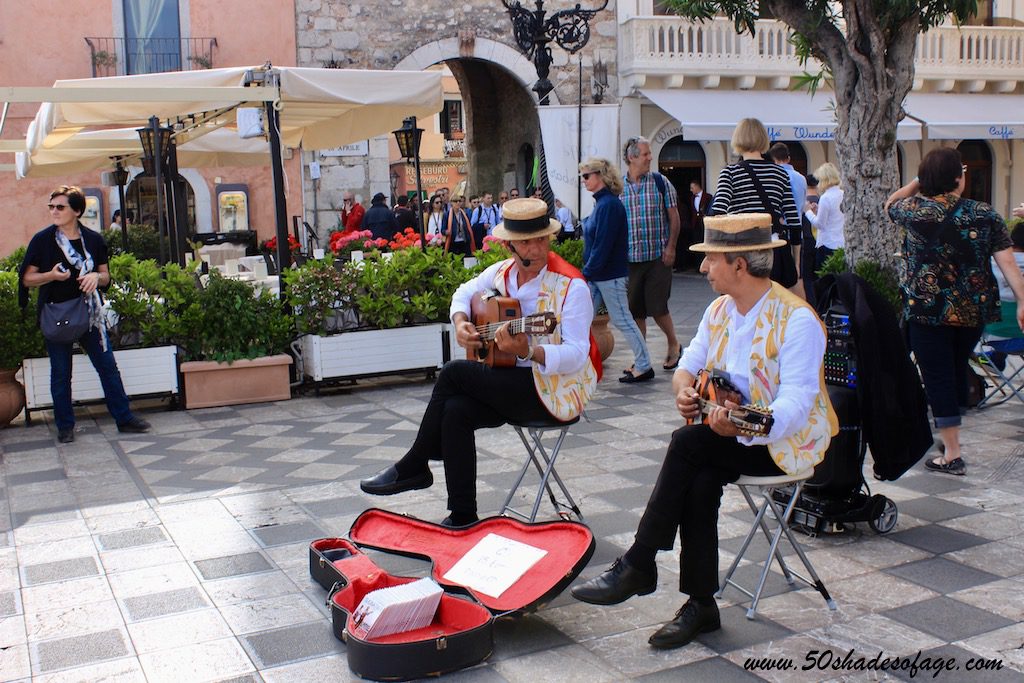 Musicians performing in the Main Square of the village

Outside St Catherine’s Church the local men have perched themselves to discuss the latest happenings in the village and maybe to watch the throngs of tourists that come to this place. 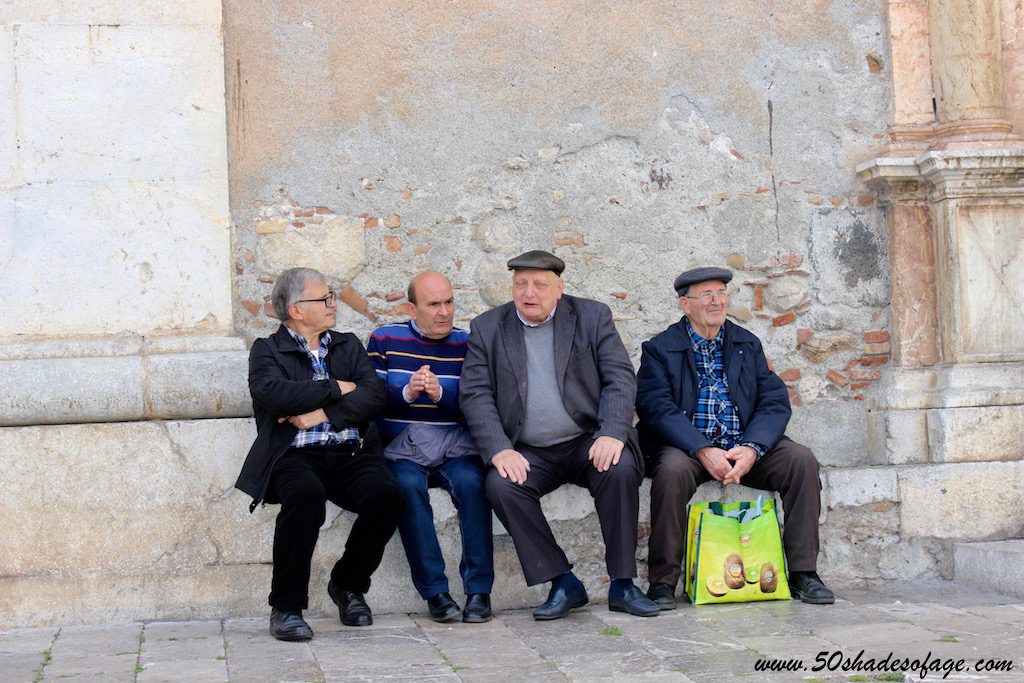 The locals watching the world go by.

When it was time to leave this enchanting ancient village we all felt sad. It was the very first of many spectacular places on our cruise itinerary, but it certainly left an imprint on our brains. We vowed that we would return to this treasure of Sicily and spend more time delving into its fascinating culture.

Have you been to Sicily? Do you agree that it is the “real Italy”?

Spread the love
Italian HolidayMediterranean CruiseMessinaSicilyTaormina
By 50 Shades, June 12, 2017 Kathy was a 50 something year old when she started up this blog 6 years ago, but has since turned over another decade and is now in her early 60s. She is married with two adult children and lives on the Tweed Coast of New South Wales, Australia. Kathy enjoys living life to the fullest and loves to keep fit and active by maintaining a healthy diet and exercising regularly. Some of her interests include reading, photography, travelling, cooking and blogging! Kathy works part-time as a freelance writer but her real passion is travelling and photographing brilliant destinations both within Australia and overseas and writing about it.