Getting Ruined in Turkey 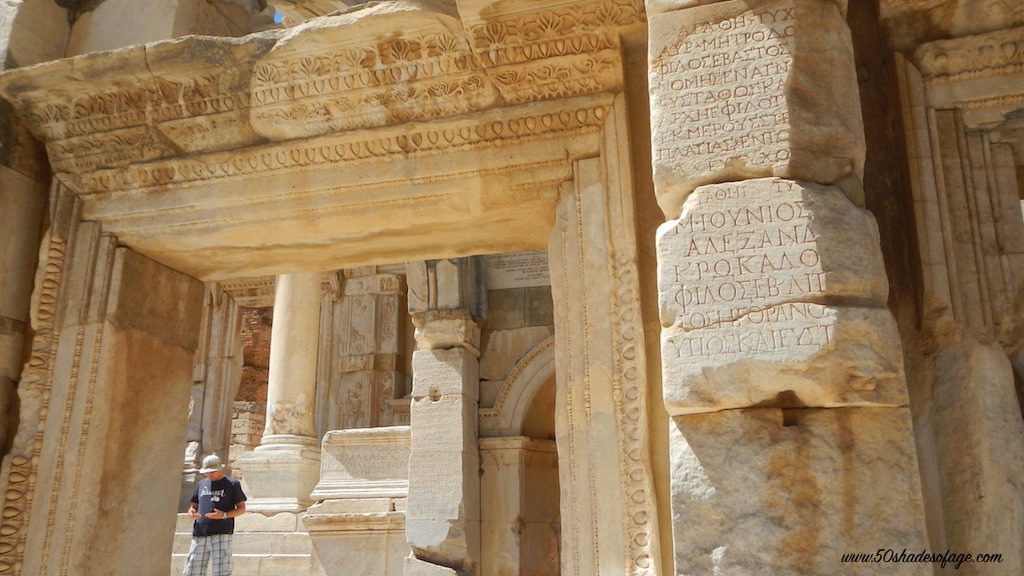 Forget Athens in Greece and Rome in Italy! Turkey is undeniably one of the best countries in Europe for visiting ancient ruins. Basically wherever you roam throughout Turkey you will glimpse an acropolis perched high atop a hill and well-preserved Roman or Greek ruins are aplenty. 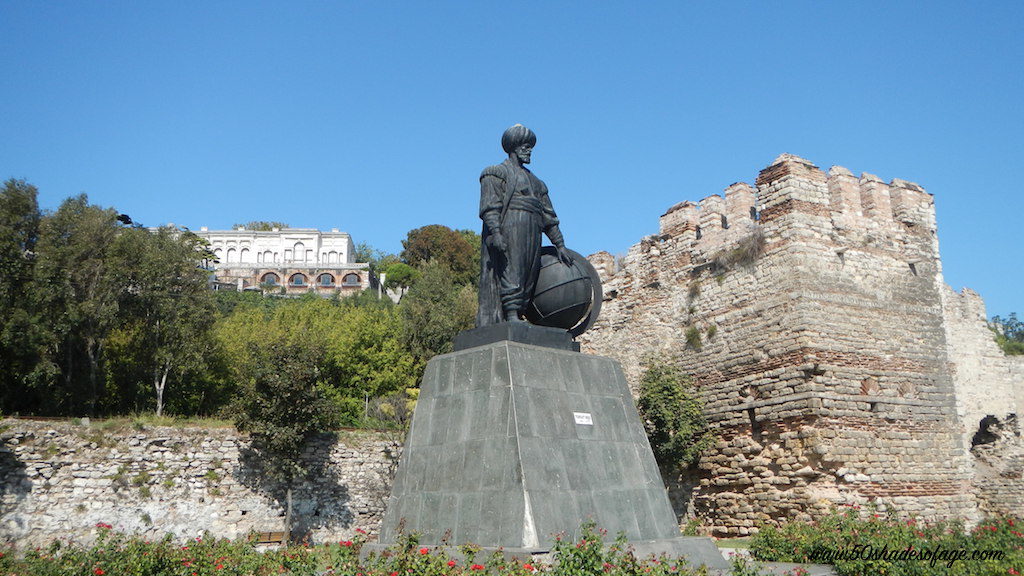 Once you have seen the some of the magnificent historical sites in the capital of Istanbul, like Hagia Sophia Museum – where you can observe both Ottoman and Byzantium effects under one great dome; Topkapi Palace – which served as the home of the Ottoman sultans and their court until the middle of the 19th century; Hipperdome – built for chariot races by the Emperor in the 3rd century; Anatolian Fortress – a 14th century castle from the Ottoman’s first attempt to capture Istanbul. 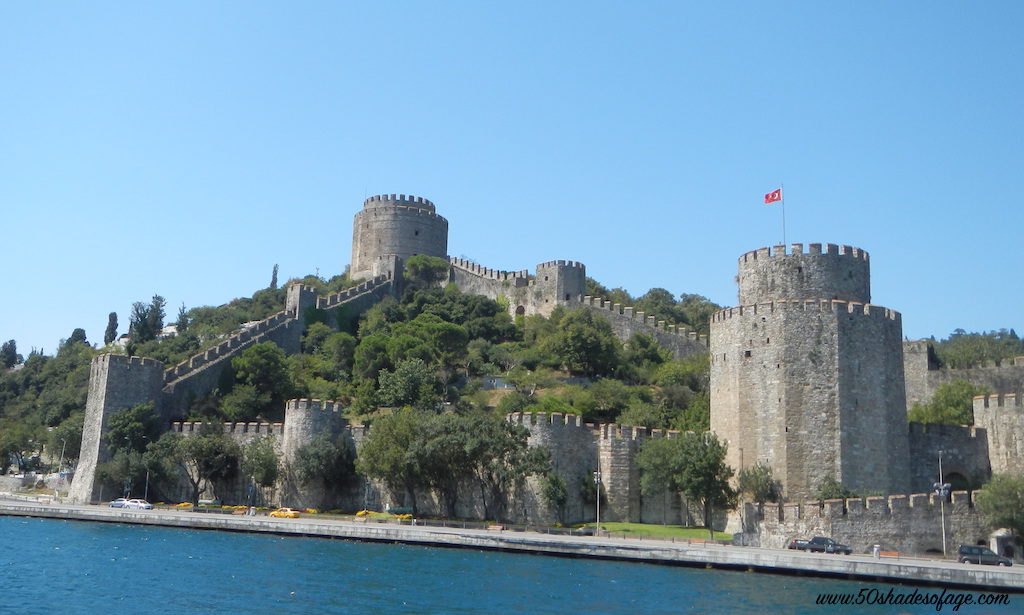 Fortress on the Bosphorous River, Istanbul

You head west towards the Lycian Way and Aegean coastline where there are some of the best preserved ruins in the modern world today, some of which date back as far back as the second century of BC. 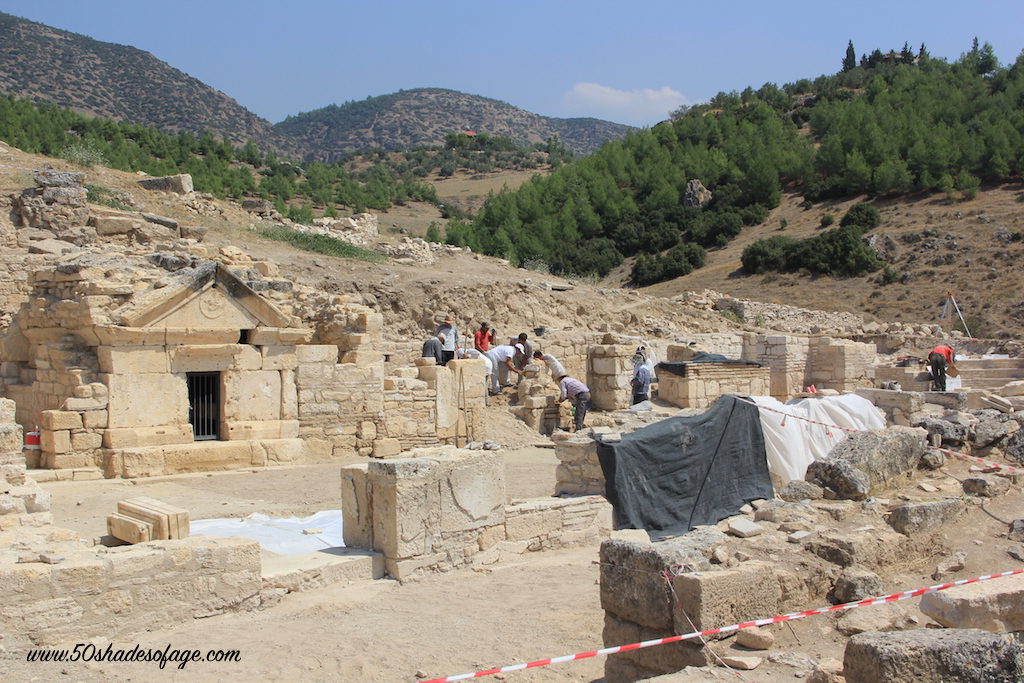 Troy with its 4,000 years of history, is one of the most famous archaeological sites in the world. It marks the meeting place of Anatolia, the Aegean and the Balkans, making it a vitally important source of information about the historic relationships between these regions. 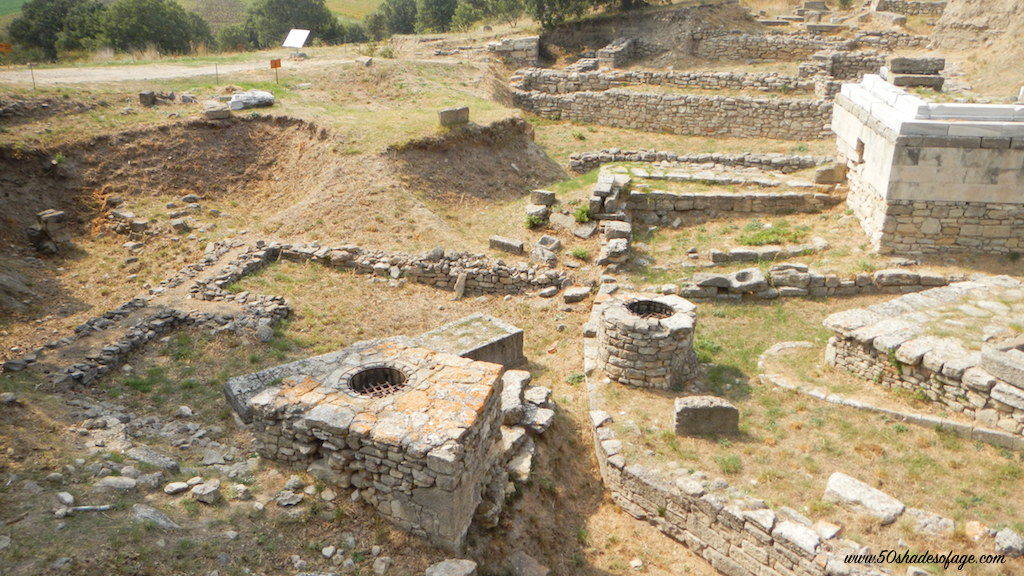 Troy is located on the mound of Hisarlık, which overlooks the plain along the Turkish Aegean coast, 4.8 km from the southern entrance to the Dardanelles.

Troy’s fame mainly derives from being the fabled location of the Trojan War. There are several ancient accounts of this conflict, mainly fiction, the most famous of which was written by Homer in The Iliad. 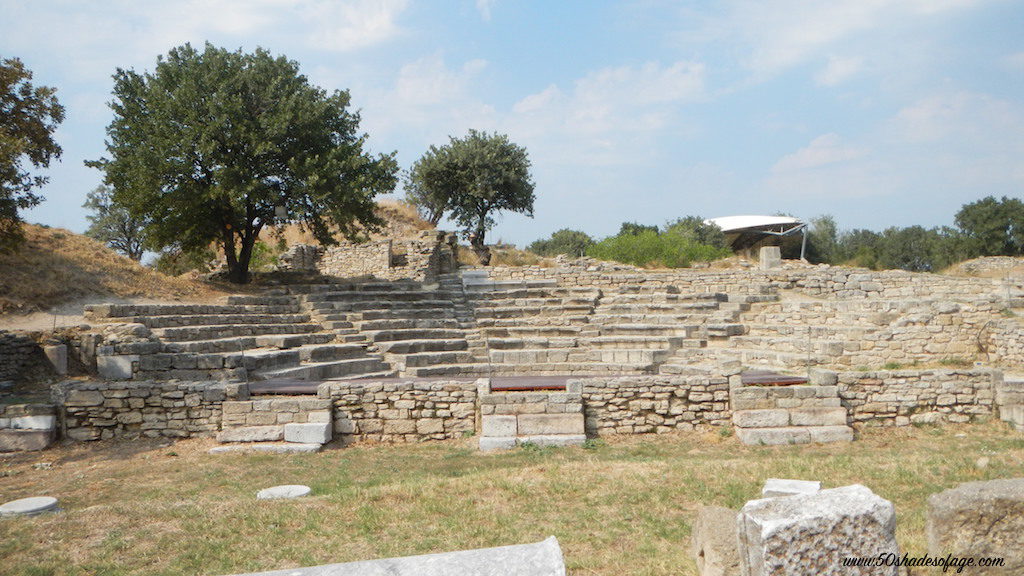 Troy historical site has a mix of Greek and Roman monuments, many built by prominent figures such as Alexander the Great and the Roman Emperor Augustus. Plus there are the famous walls of Troy, which played such an important role in the Trojan War, some of which remain, can be seen at the site.

Pergamum (or Pergamon) was an important kingdom during the second century BC, having grown from a city-state captured by Alexander The Great. The ruins lie to the north and west of the modern city of Bergama. 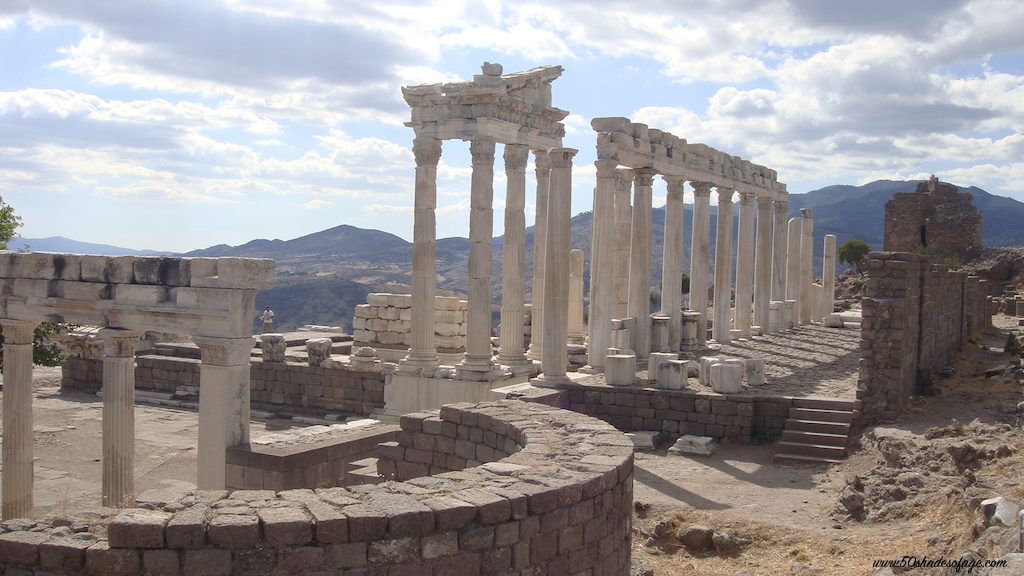 In 129 BC, Pergamum became part of the Roman Empire, accounting for the presence of Roman artwork and temples, and later became part of the Byzantine Empire. Roman Pergamum is believed to have sustained a population of approximately 150,000 at its height in the 1st century AD. 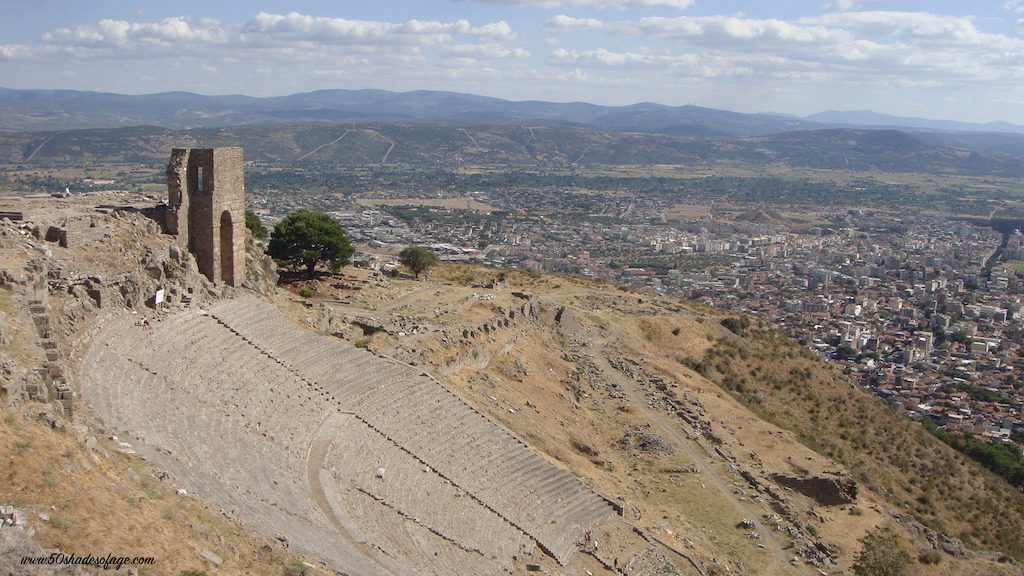 The historic ruins of Pergamum are split into three main areas. In the Acropolis, you can find sites such as its library, gymnasium, very steep theatre and arsenal as well as the Roman Temple of Trajan. 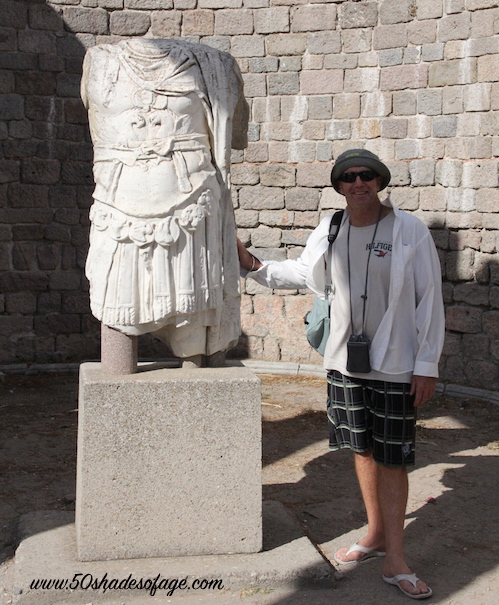 In the city of Bergama also of note is the the cathedral-sized Red Hall, sometimes called the Red Basilica, which was originally built as a giant temple to the Egyptian gods Serapis and Isis in the 2nd century AD. It’s still an imposing-looking place, though rather scattered and battered. 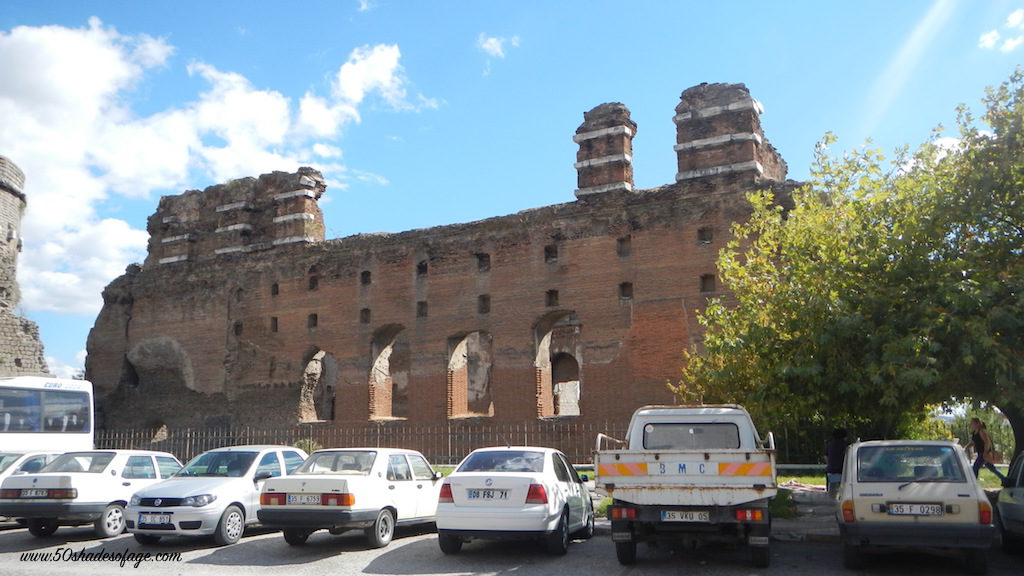 Ephesus, probably the most renowned and visited ruins in Turkey, is an ancient city in Turkey’s Central Aegean region, near modern-day Selçuk. Its excavated remains reflect centuries of history, from classical Greece to the Roman Empire. 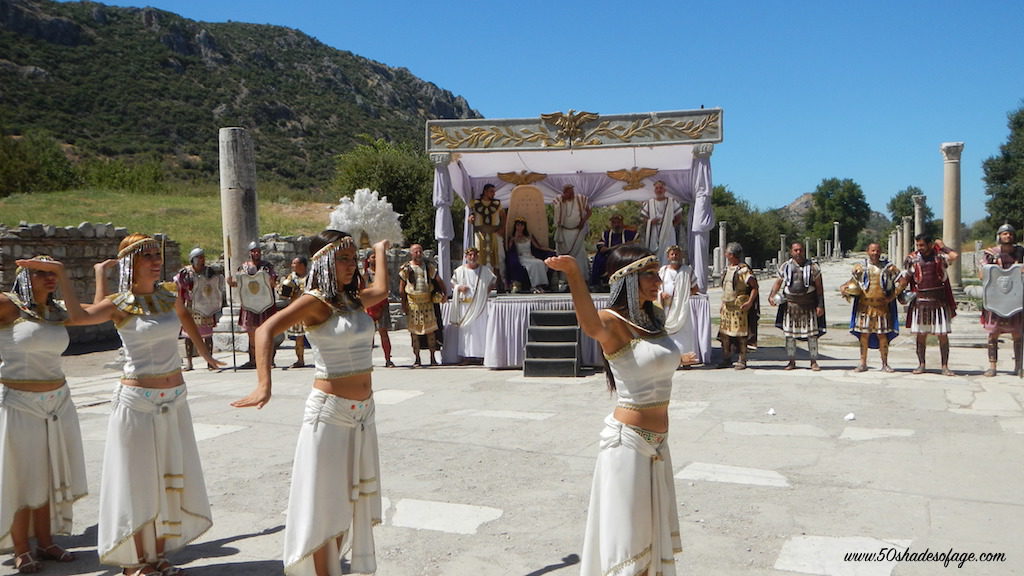 Thought to have been founded in the 10th century BC by an Athenian prince named Androklos, Ephesus grew into a thriving city until 650BC when it was attacked and damaged by the Cimmerians. 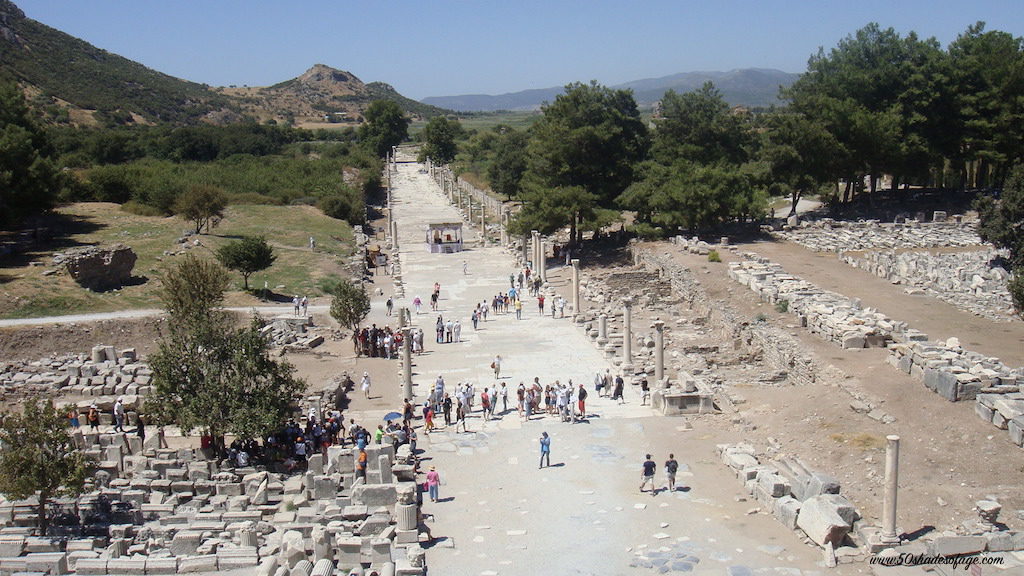 Ephesus is a treasure trove for enthusiasts of Ancient Roman and Greek history, allowing them to walk through its streets and view its magnificent houses, community buildings, temples and stadiums. 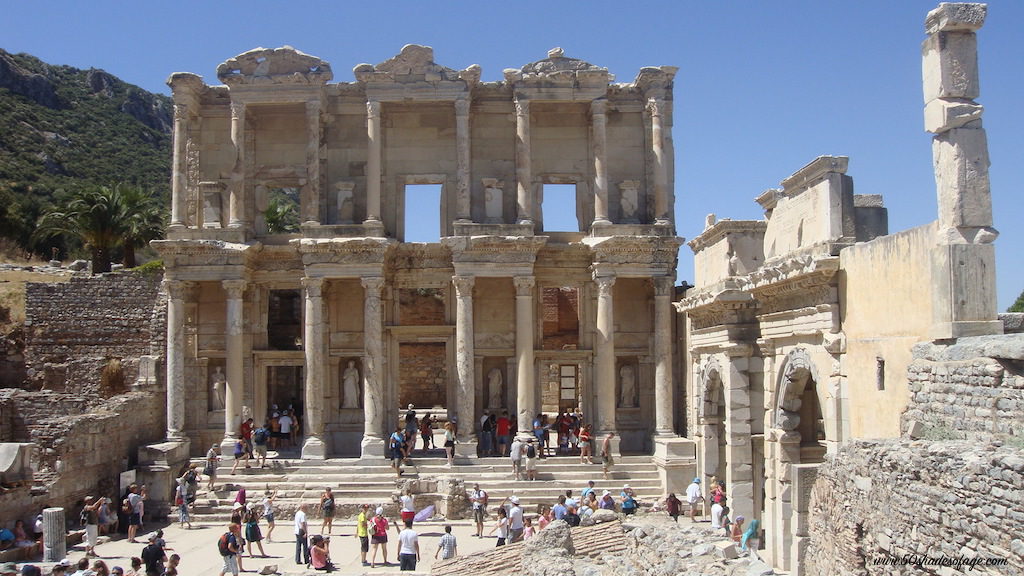 Some of the most impressive sites at Ephesus include the Library of Celsus, the ruins of which stand two storeys high, the Temple of Hadrian which was built in 118 AD, the classical theatre where it is believed Saint Paul preached to the Pagans and the Cave of the Seven Sleepers. 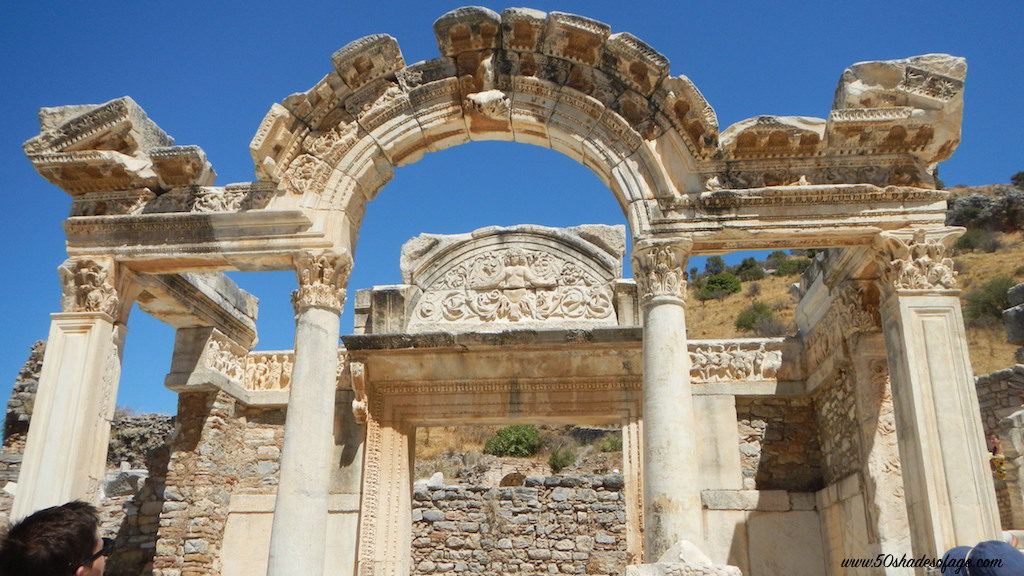 Hierapolis was an ancient city located on hot springs in classical Phrygia in southwestern Anatolia. Its ruins are adjacent to modern Pamukkale in Turkey and currently comprise an archaeological museum designated as a UNESCO World Heritage Site. 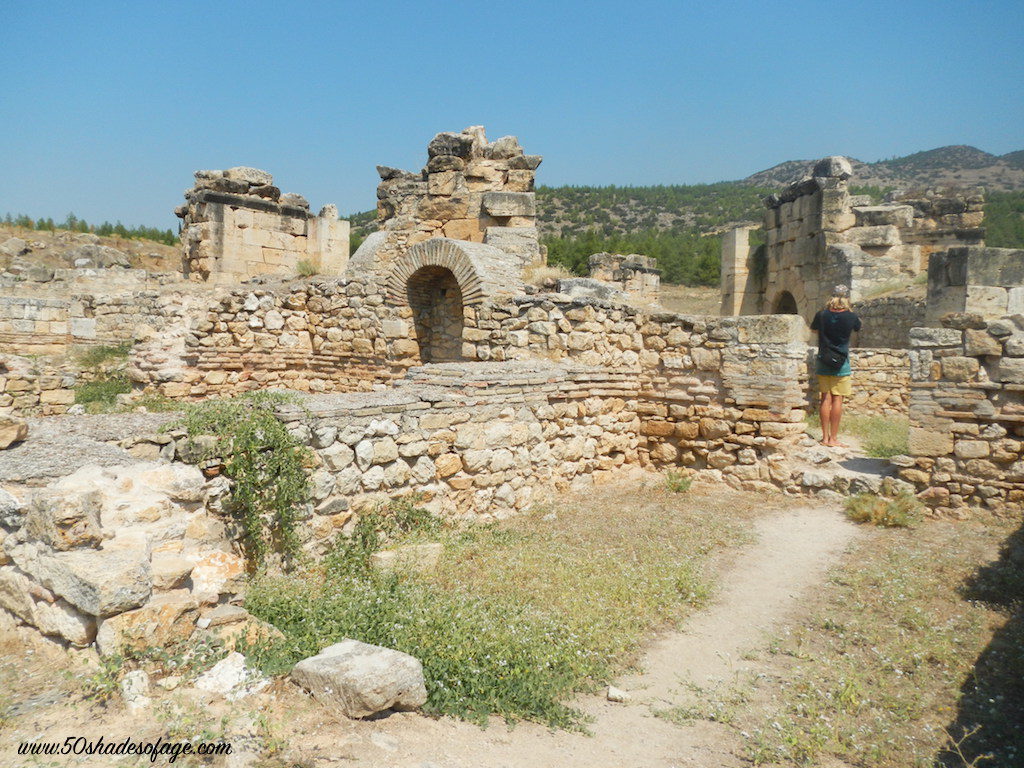 It is said to have been founded by the rulers of Pergamum, the Attalid Dynasty, and is usually attributed to their King Eumenes II (197BC-159BC). 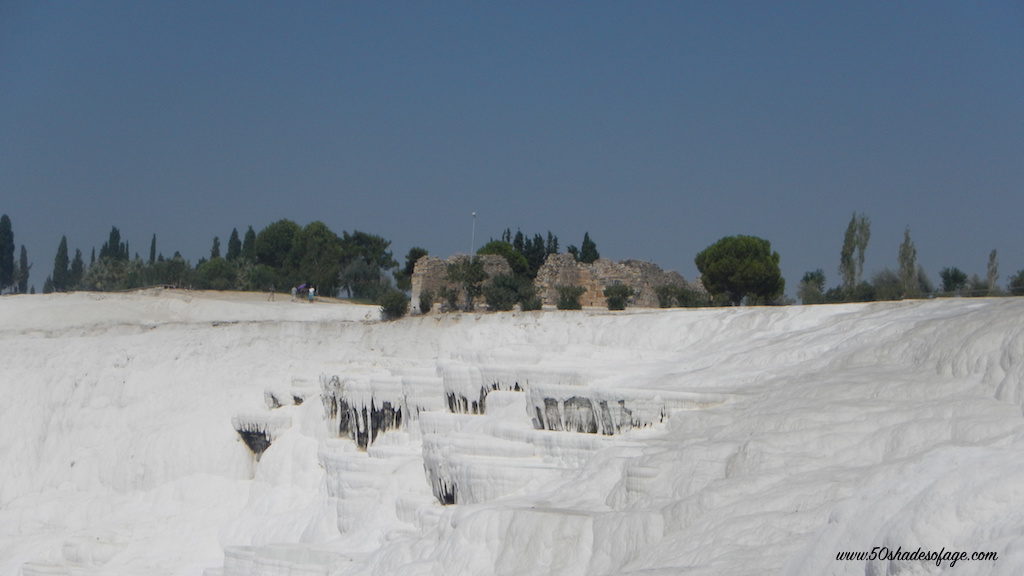 The Travertine Cascades of Pamukkale and Ruins of Hierapolis

Most of the ruins at Hierapolis date from the Roman period. The Romans occupied Hierapolis in 129AD and the city grew into something of a multicultural haven, with Romans, Jews, Greco-Macedonians and others living there side by side. 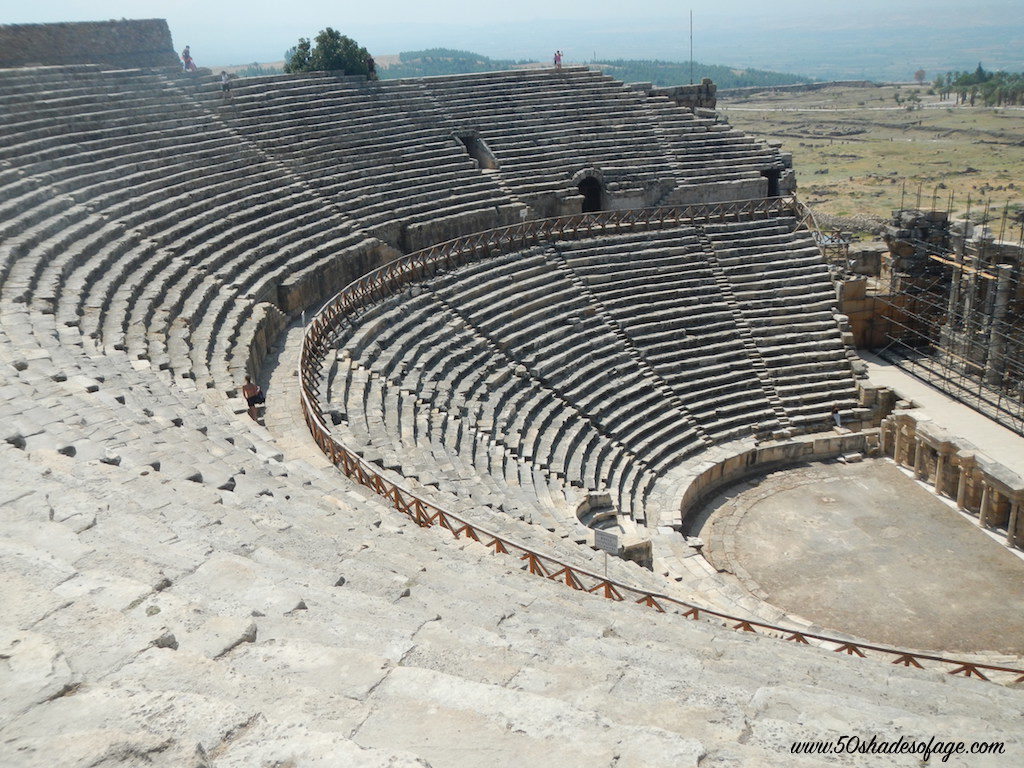 There’s plenty to see at Hierapolis, including its theatre, Hellenistic layout and streets, many standing columns, the nymphaeum and a large necropolis to name a few sites. Visitors can also take a dip in the hot springs, a unique experience. 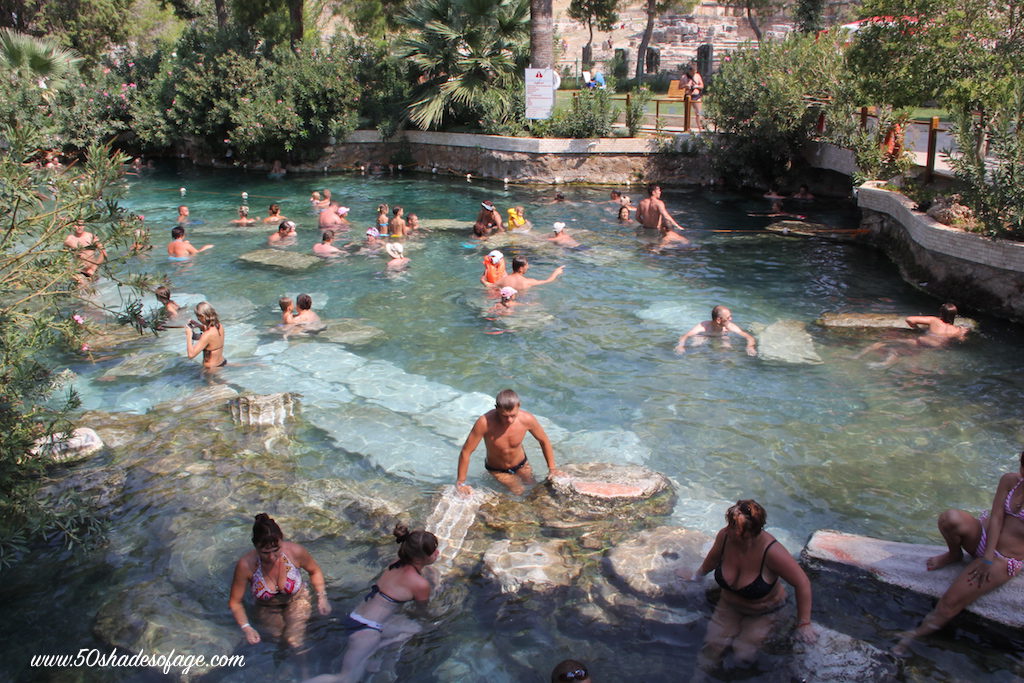 For those of you who love to get “ruined” in Europe and lost amongst ancient European civilizations, I would highly recommend a trip to Turkey. Not only does it offer some of the best restored ruins but most of the historical sites are a lot less crowded than the sites in Rome and Athens. I would happily get ruined here again and again!

Spread the love
Ancient Ruins TurkeyEphesusIstanbulTravel TurkeyTroyTurkey Ruins
By 50 Shades, June 14, 2016 Kathy was a 50 something year old when she started up this blog 6 years ago, but has since turned over another decade and is now in her early 60s. She is married with two adult children and lives on the Tweed Coast of New South Wales, Australia. Kathy enjoys living life to the fullest and loves to keep fit and active by maintaining a healthy diet and exercising regularly. Some of her interests include reading, photography, travelling, cooking and blogging! Kathy works part-time as a freelance writer but her real passion is travelling and photographing brilliant destinations both within Australia and overseas and writing about it.