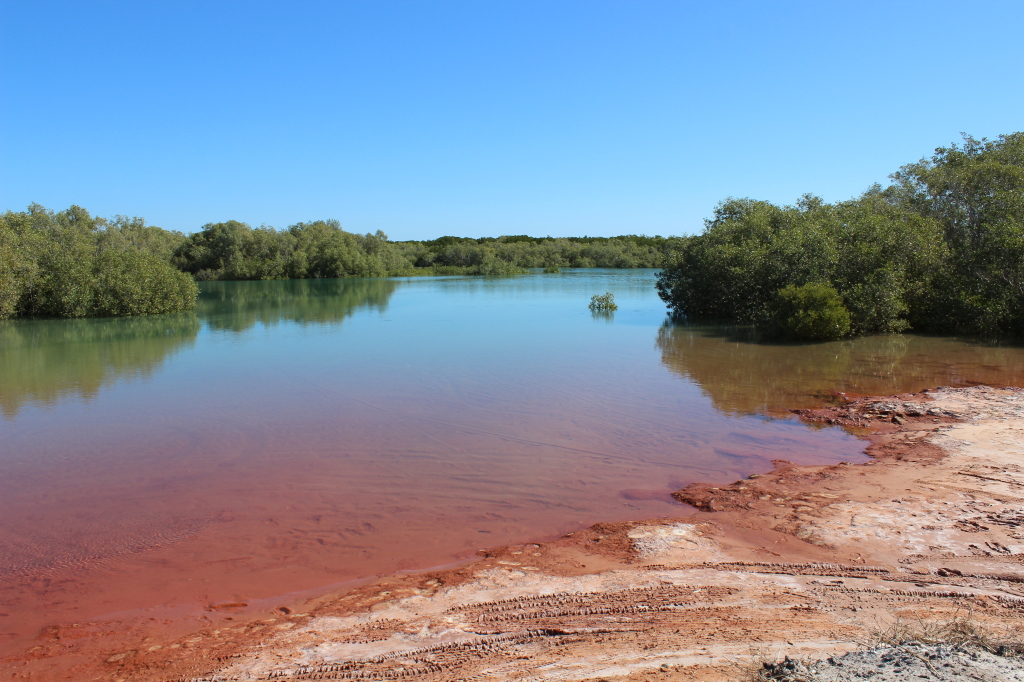 Some of the most remarkable places that I visited on my travels around Australia were also some of the most remote. In some cases it involved trekking down a a rough dirt road for many kilometres and in other cases hiking on foot. I have to admit that these places were very special and I would like to share them with you.

21 kilometres south of Penong on the Nullarbor Plain in South Australia is the famous surfing beach called Cactus Beach. The corrugated dirt road takes you via Lake McDonnell and vast sand dunes with coastal vegetation bursting with birdlife and Australian native animals. 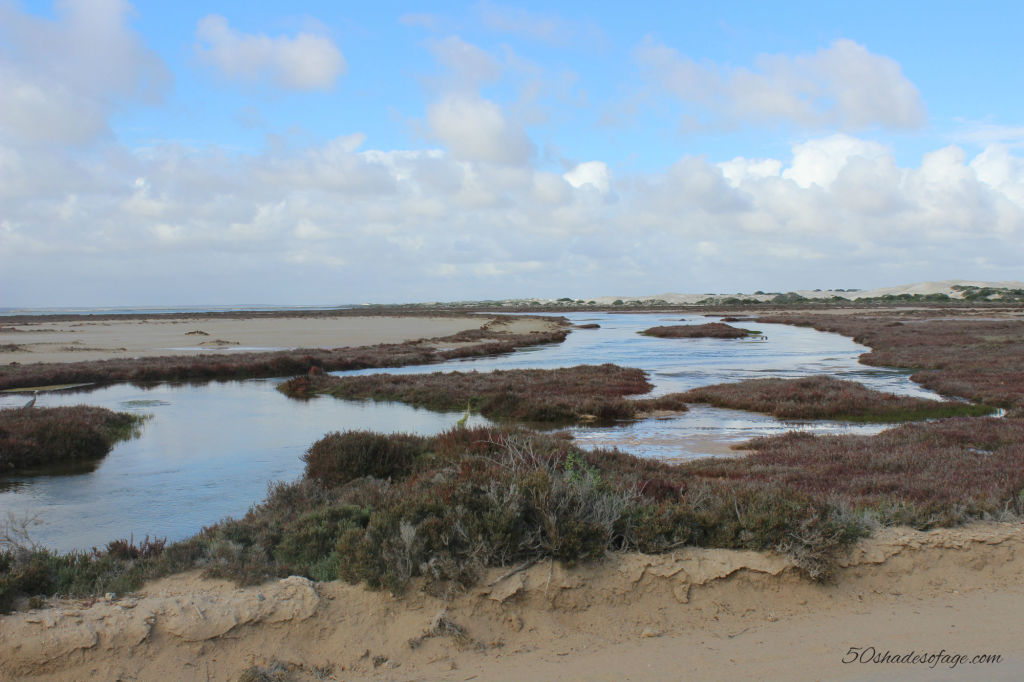 The lake is very high in salt concentration which gives the impression of being salmon pink on clear days. Lake McDonnell can look blue in one direction and pink in the other and also often reflects the white sand dunes. 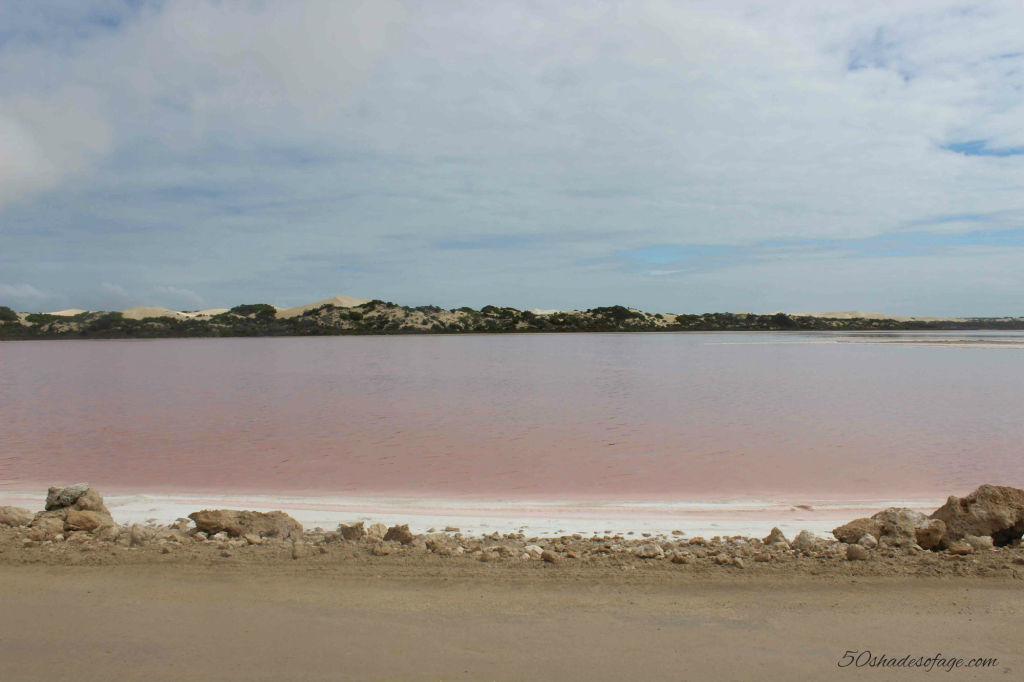 Cactus Beach is an iconic surfing mecca.  Surfers from all over the world converge on Cactus Beach to test their skills on two left-hand breaks ‘Castles’ and ‘Cactus’ and one powerful right-hander ‘Caves’. 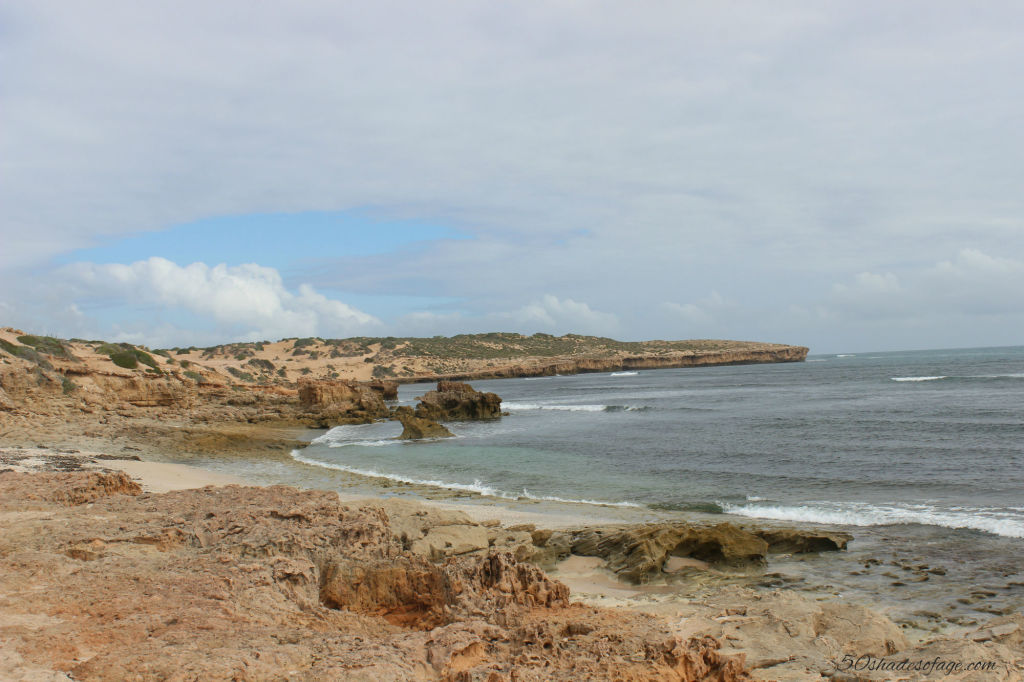 Nearby is the idyllic little cove of Point Sinclair with a jetty and shark enclosure for swimming. The enclosure was erected after the tragic death of an eleven year old boy taken by a White Pointer Shark in 1975. 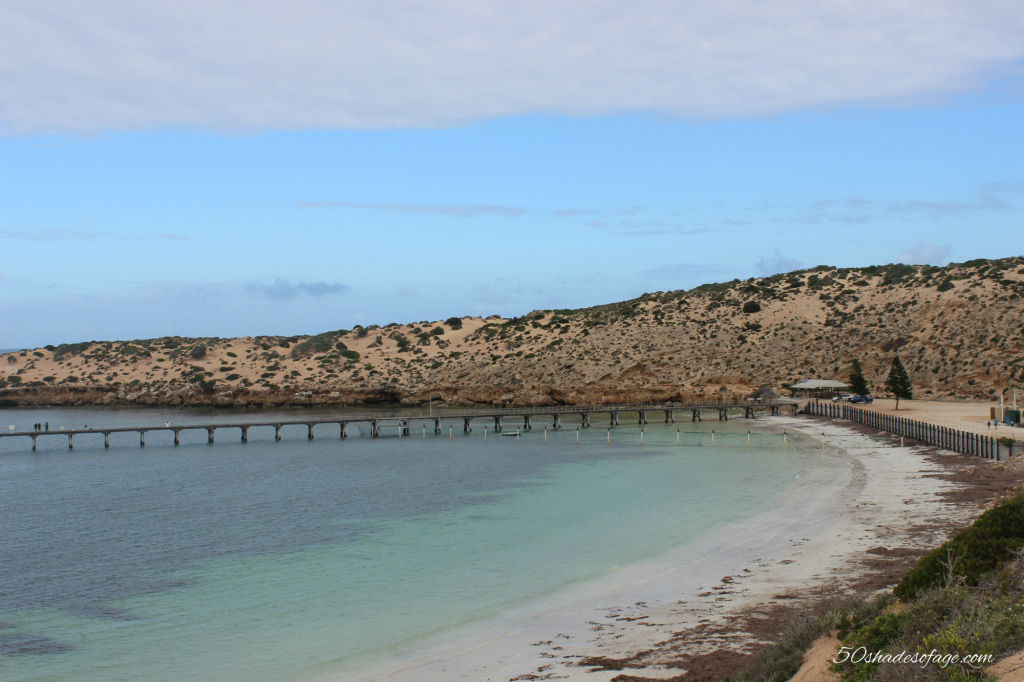 Located on a promontory 32km to the south west of the town of Port Lincoln, Whaler’s Way is a series of unsealed tracks which pass through private property along its 14km length, giving access to one of the most dramatic sections of coastline on the Australian mainland. The coast is inundated with a series of natural crevasses, giant fissures, caves and steep cliffs. 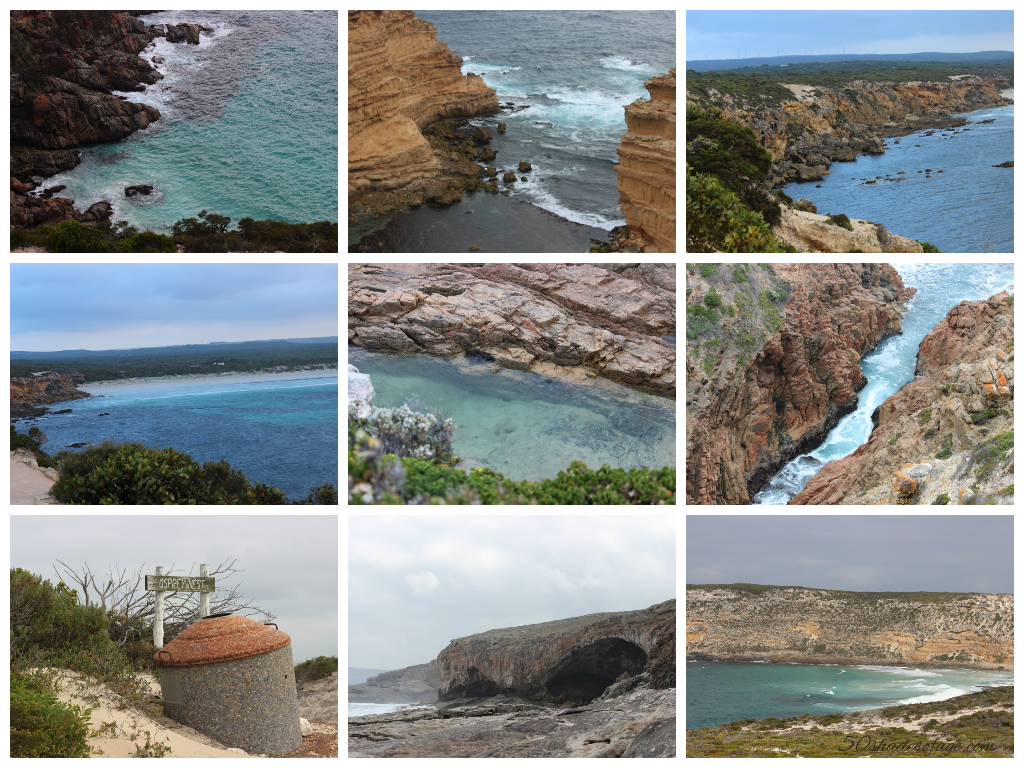 As the name suggests Whalers Way was once a whaling station and the nearby Fishery Bay still reveals some evidence of the whaler’s presence. Fishery Bay is now a magnificent snow white sandy beach that is popular for free-camping, swimming, surfing and fishing. 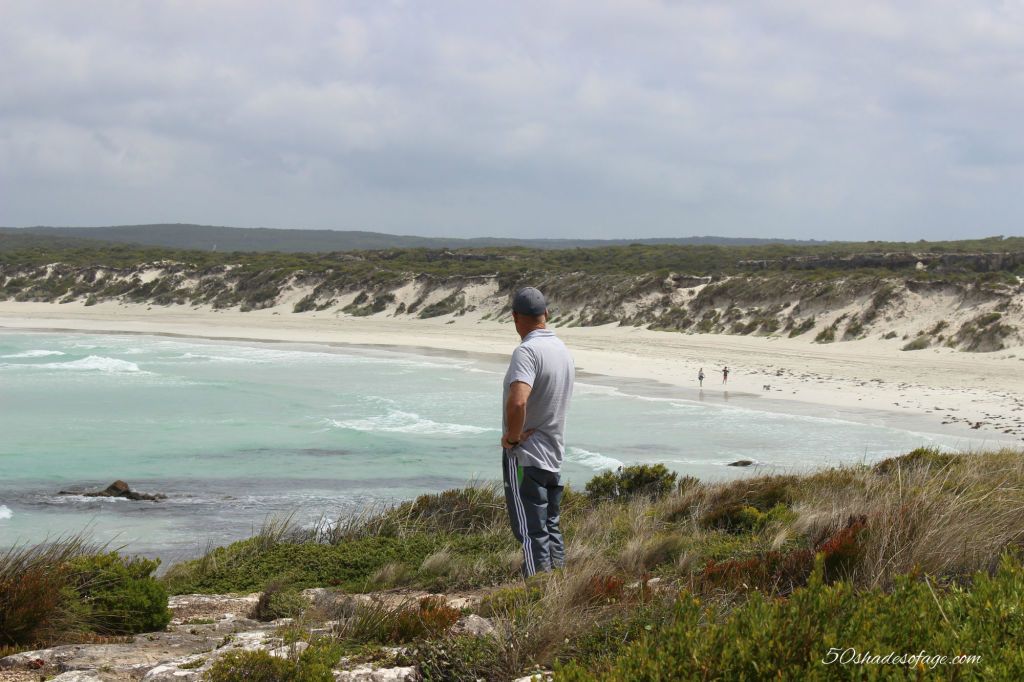 56 kilometres east of Esperance in the south west of West Australia is Cape le Grand National Park. This grand park features sweeping heathlands, rugged coastal peaks and white sandy beaches voted the best in Australia. Where else do you see kangaroos on the beach and an Aboriginal Barista serving coffee from a caravan on the pristine beach called Lucky Bay? 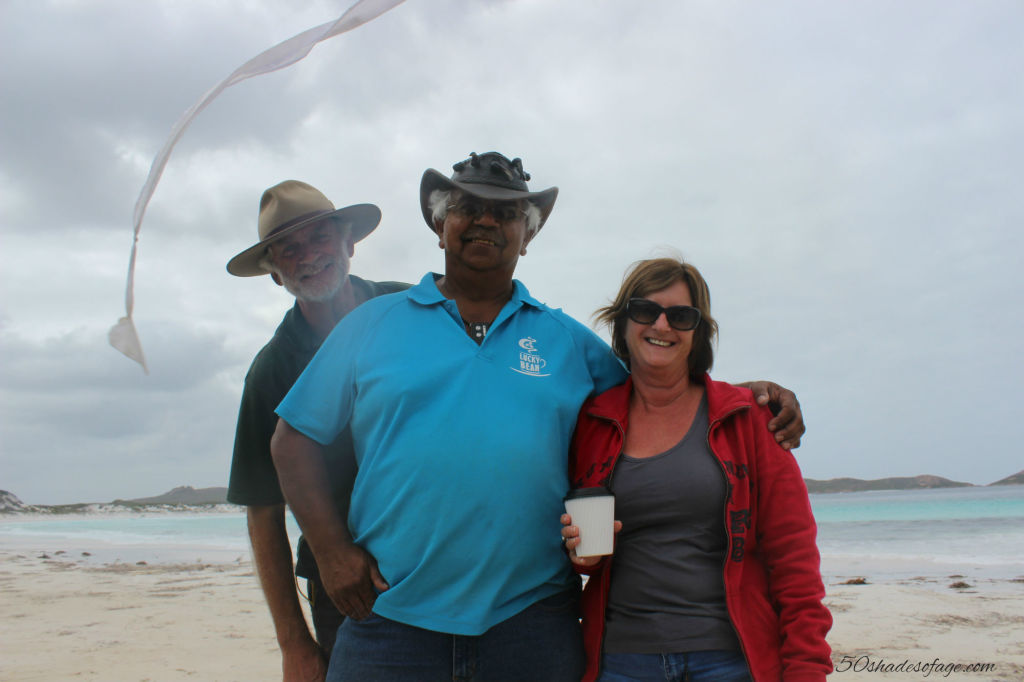 Explore the park’s wild reaches on the Le Grand Coastal Trail, that links many of the parks most spectacular coastal sections between Cape Le Grand Beach and Rossiter Bay. If you still have energy to burn then a hike up Frenchman Peak (262m) will reward you with panoramic views of the park and islands of the Recherche Archipelago. 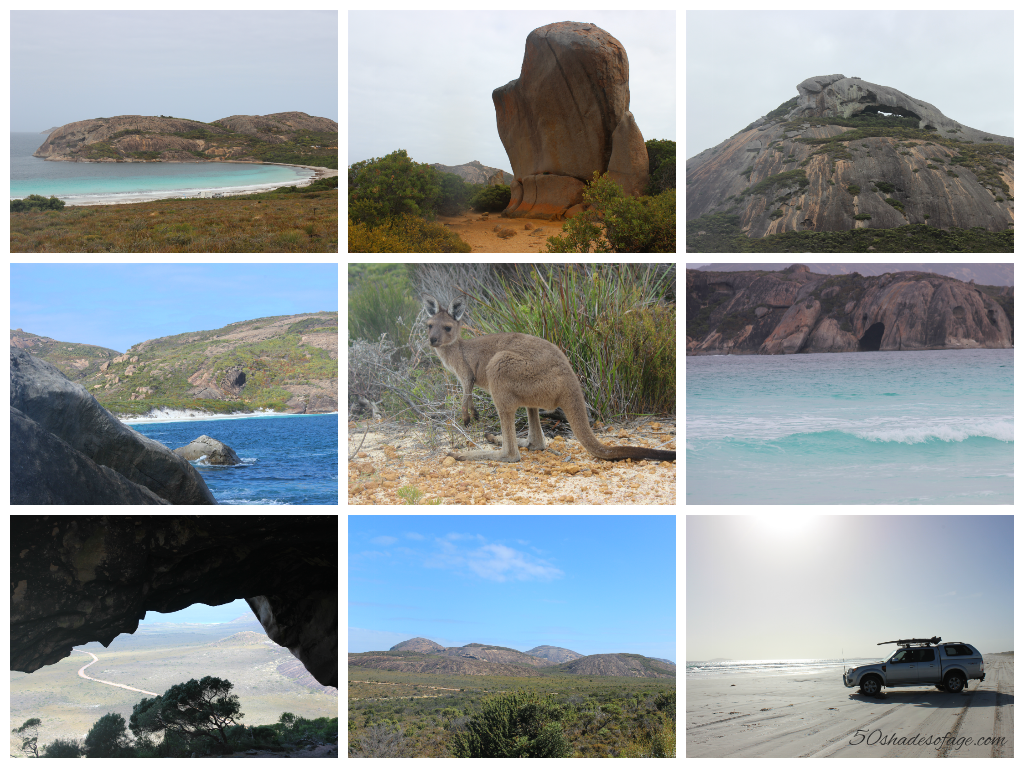 A short drive on Indian Ocean Drive, heading north 13 kilometres from Jurien Bay, and 225 kilometres north of Perth in West Australia, is the 4WD Sandy Cape recreational area. It is part of the Jurien Marine Park that is a protected area for the local Sea Lions that breed in and around the area. 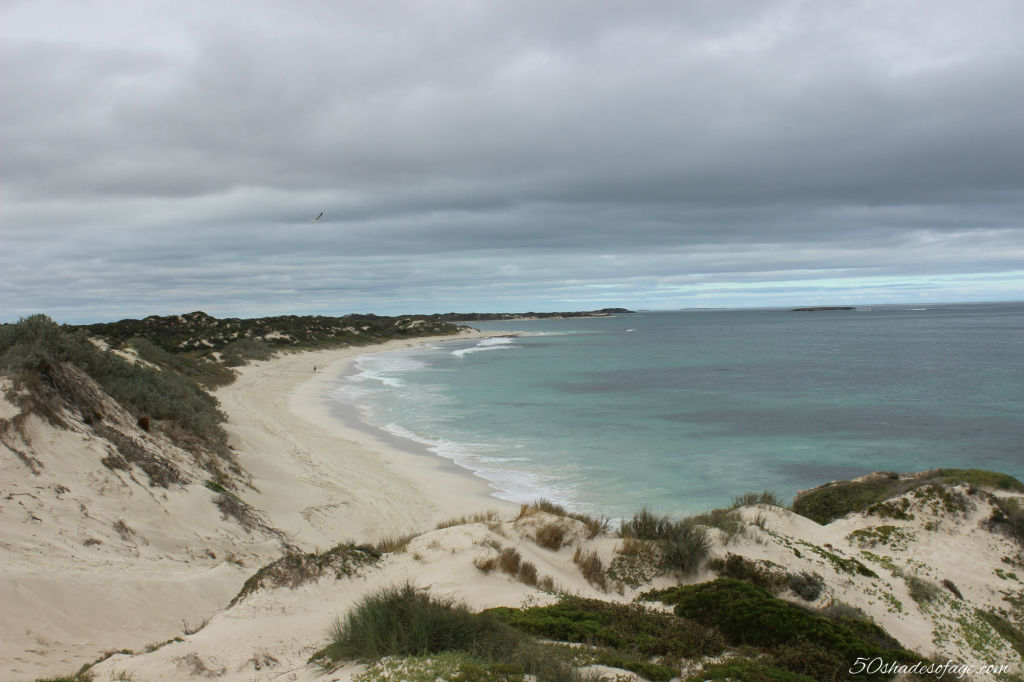 The white sandy beaches offer a magnificent beachfront campsite with many activities to enjoy such as swimming, snorkelling, beach fishing or bush walking along the tracks provided through the native vegetation. It is also popular for a spot of sand dune tobogganing down the tall sand dunes of the cape. 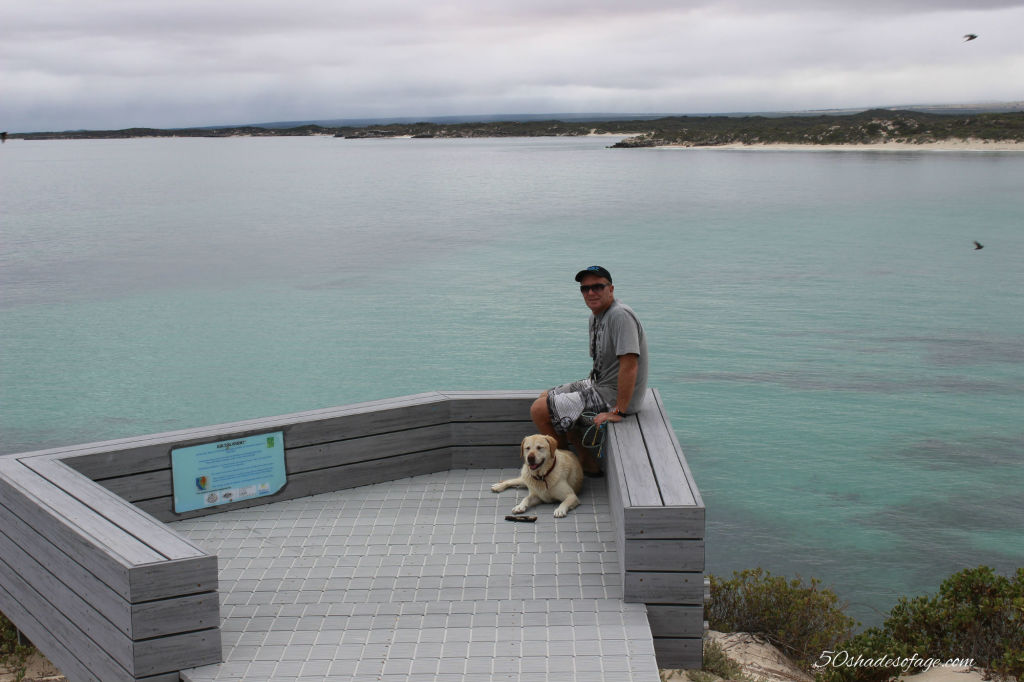 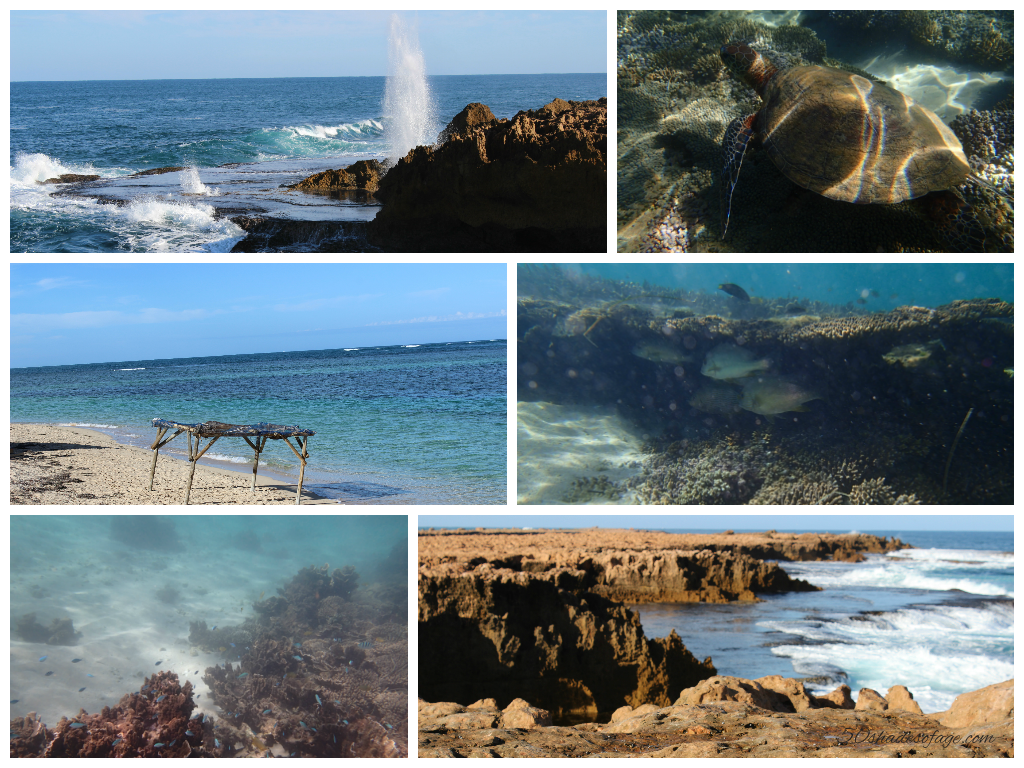 The virtually unexplored and unspoilt Red Bluff and Gnaraloo are popular areas for nature-based camping, secluded eco-friendly ocean-view retreats and seascape bungalows. However it is a further drive of 70 kilometres north of Point Quobba on a rough dirt road, but fully worthwhile. 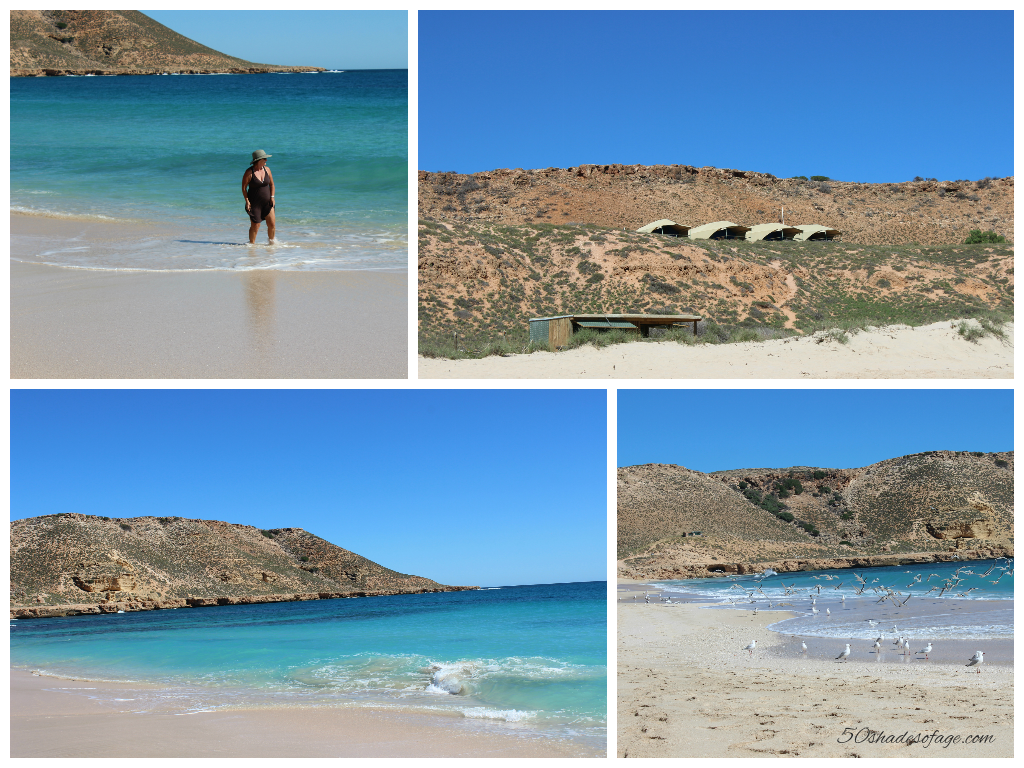 Located 128 kilometres south of Broome, in North Western Australia, and 9 kilometres off the Great Northern Highway ,is a unique beachside station stay called Barn Hill. It is actually a caravan park with full amenities, lovely shady trees and even a lawn bowling green. 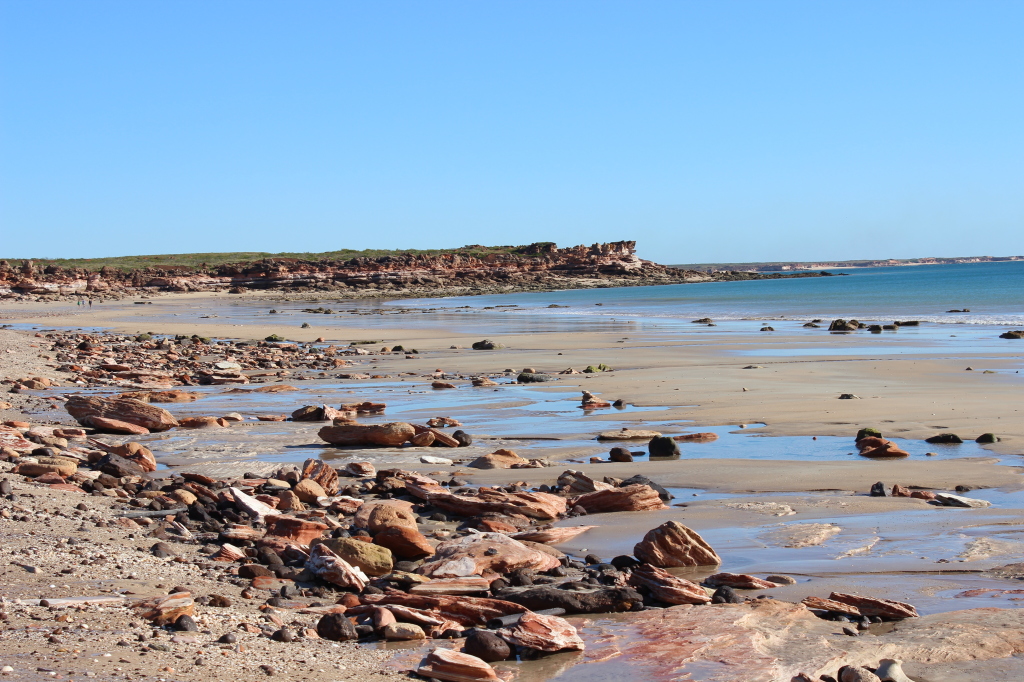 Fishing right off the beach is great or you can launch your boat from the boat ramp. There is a huge of expanse of beautiful untouched beach known as Eighty Mile Beach with the most vibrant coloured rock formations and fabulous sea shells. Swimming is enjoyable in the turquoise blue waters, and there are plenty of walking areas or you can take your 4WD on to the beach and drive in either direction. 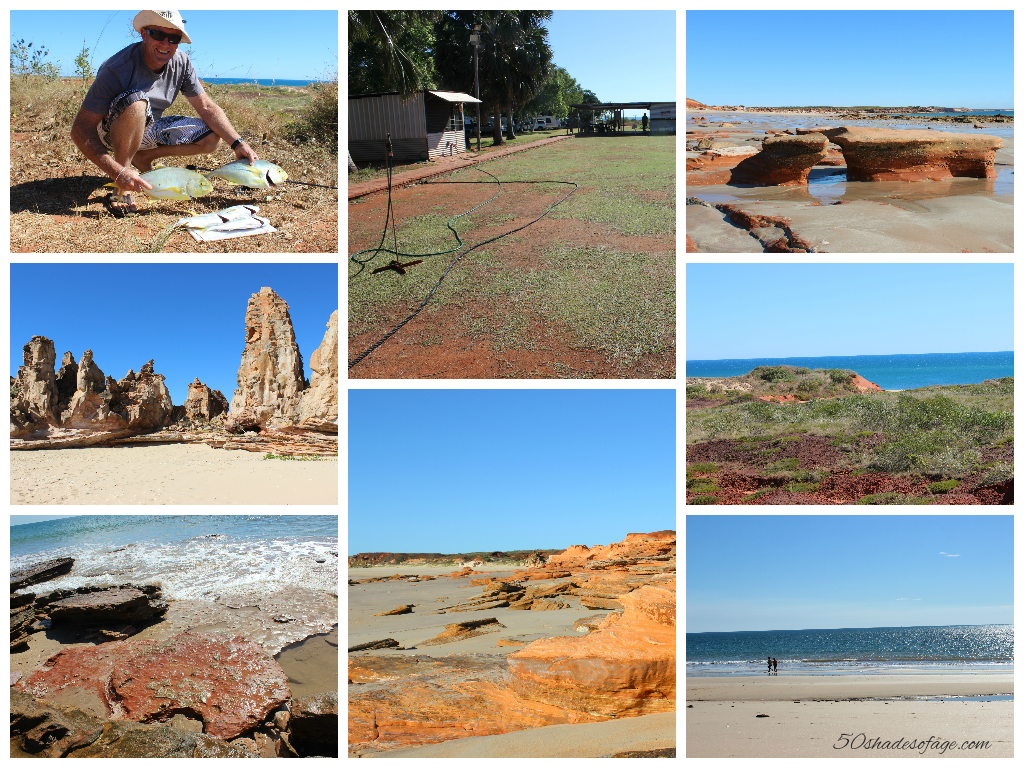 Heading 45 kilometres north from Broome in West Australia, is Quondong Point on Cape Leveque on the Dampier Peninsula. It is a spectacular coastline with a free camping area and although heralded as crocodile country, it is reasonably safe to swim in the sea. 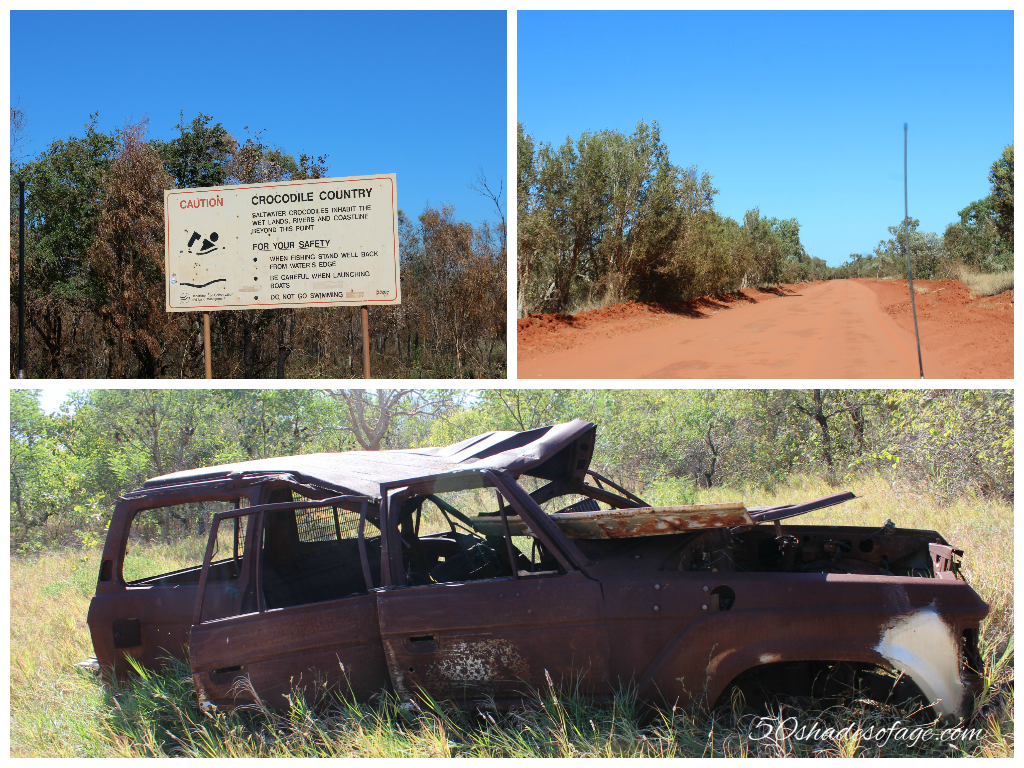 Here in this remote paradise you can fish off the shores or launch your boat, explore the tidal pools for octopus or fresh oysters off the rocks. It is also a great place to whale watch during the whale migration season. You won’t get much more remote than this. 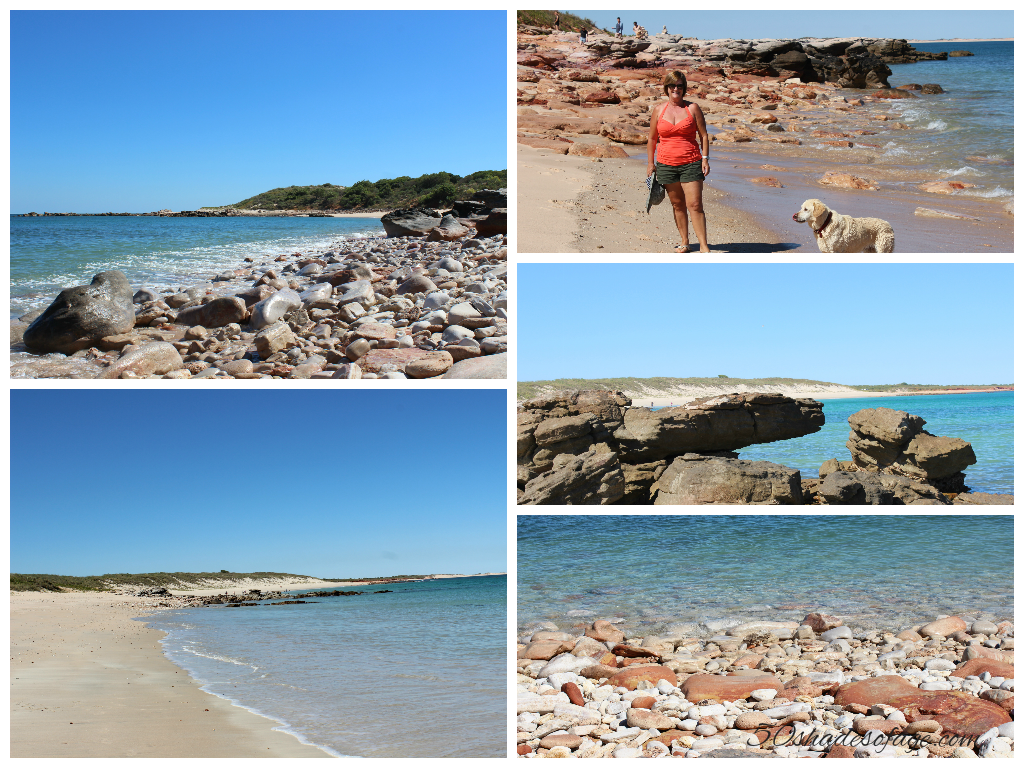 Where in the world have you travelled to that could be described as being wild and remote?

Spread the love
Cape le GrandCape LevequeEyre PeninsulaNorth West AustraliaNullarborSouth West AustraliaTravel Australia
By 50 Shades, November 3, 2014 Kathy was a 50 something year old when she started up this blog 6 years ago, but has since turned over another decade and is now in her early 60s. She is married with two adult children and lives on the Tweed Coast of New South Wales, Australia. Kathy enjoys living life to the fullest and loves to keep fit and active by maintaining a healthy diet and exercising regularly. Some of her interests include reading, photography, travelling, cooking and blogging! Kathy works part-time as a freelance writer but her real passion is travelling and photographing brilliant destinations both within Australia and overseas and writing about it.