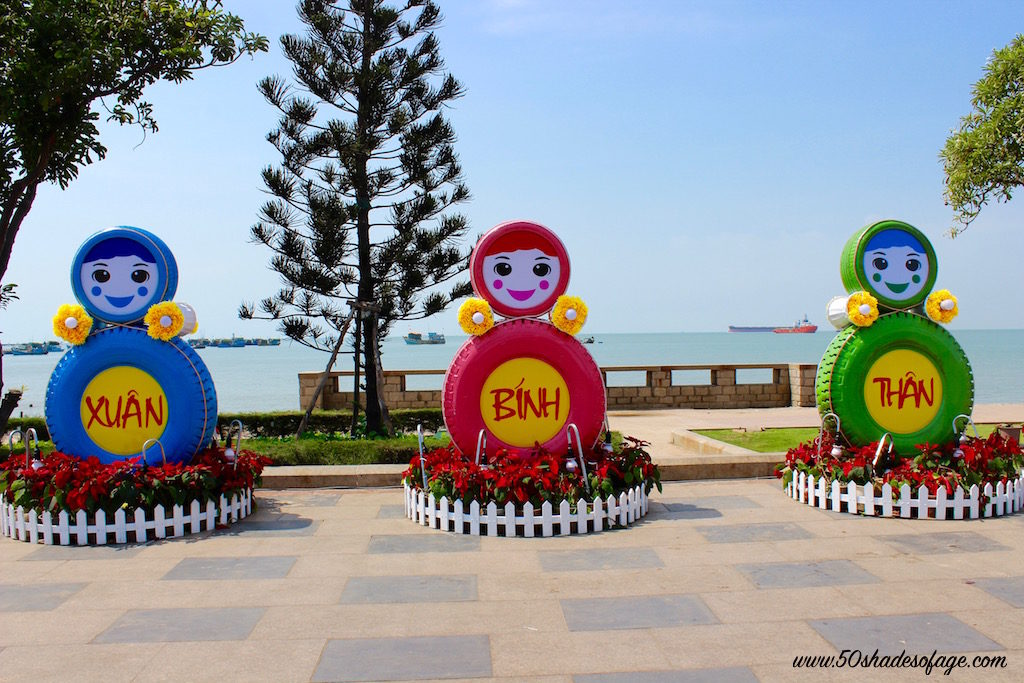 Our second port of call in Vietnam brought us to the port of Phu My (pronounced Foo Me), which was advertised as being the stop for Ho Chi Minh City (Saigon). After doing our homework we found out that it was around two hours drive so we decided to head to the Vietnam War soldier’s R&R destination, Vung Tau.

As it turned out Vung Tau was only about a 40 minute drive from the port which gave us more time to explore this peaceful town in the Bà Rịa–Vũng Tàu Province, on the southern peninsula of Vietnam. 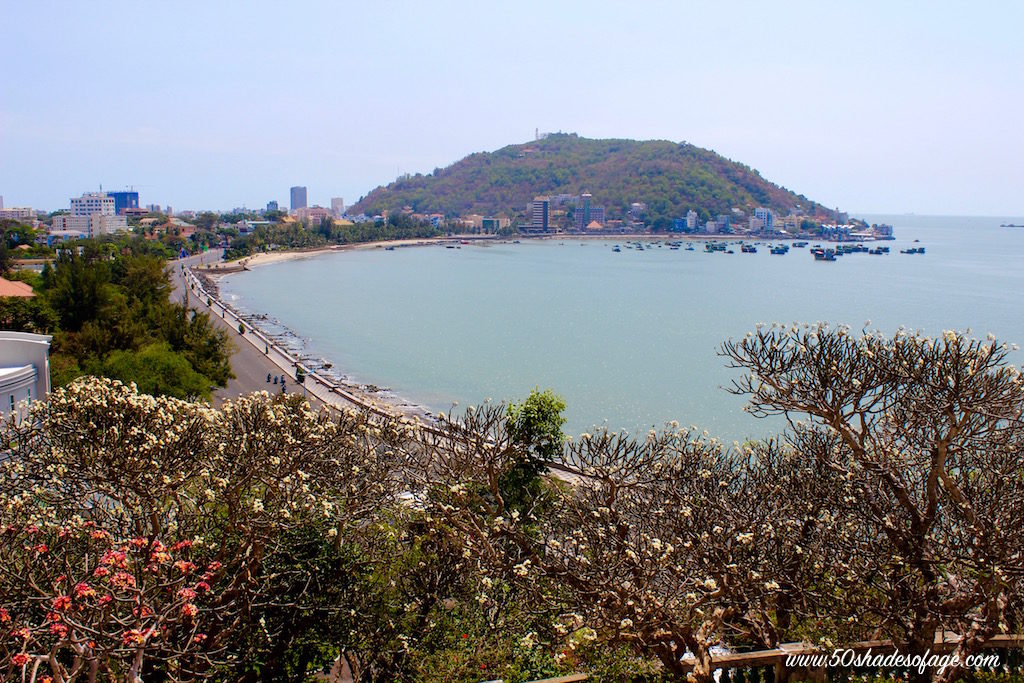 It has traditionally been a significant port, particularly during Vietnam’s period of French rule. Today, the city’s importance as a shipping port has diminished, but it still plays a significant role in Vietnam’s offshore oil industry. 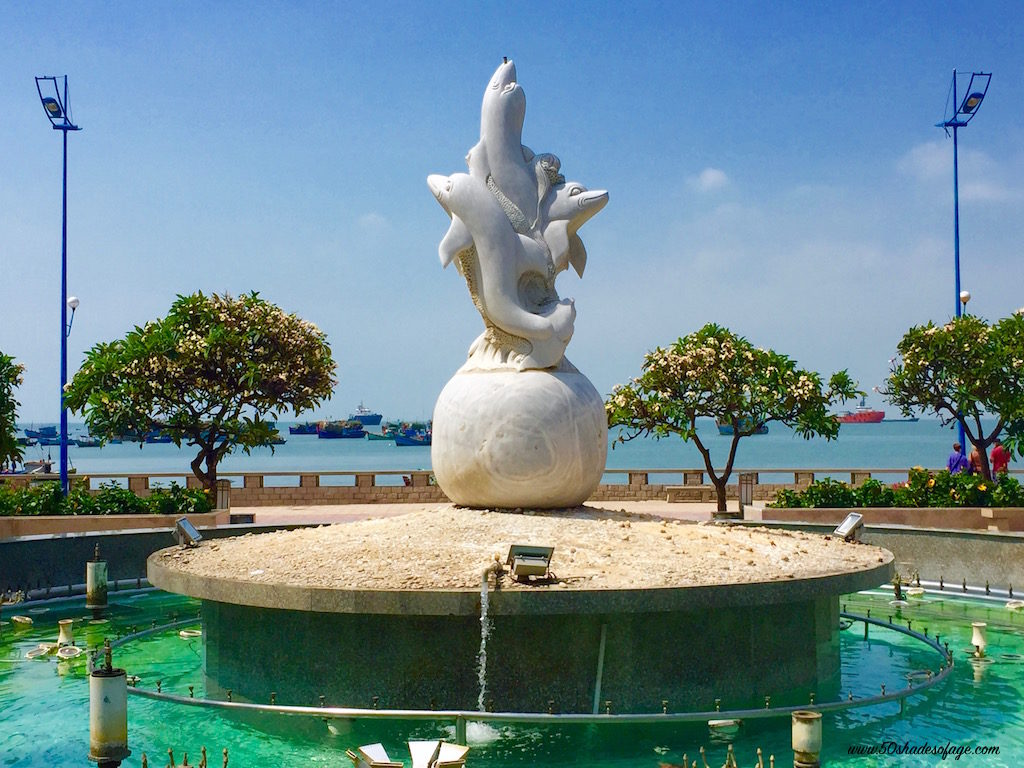 Nowadays it is used as a seaside holiday resort for people wishing to escape the hustle and bustle of Ho Chi Minh City. It is easy to see why with its beautifully landscaped beachfront gardens and picturesque bay with a long stretch of sandy beach. 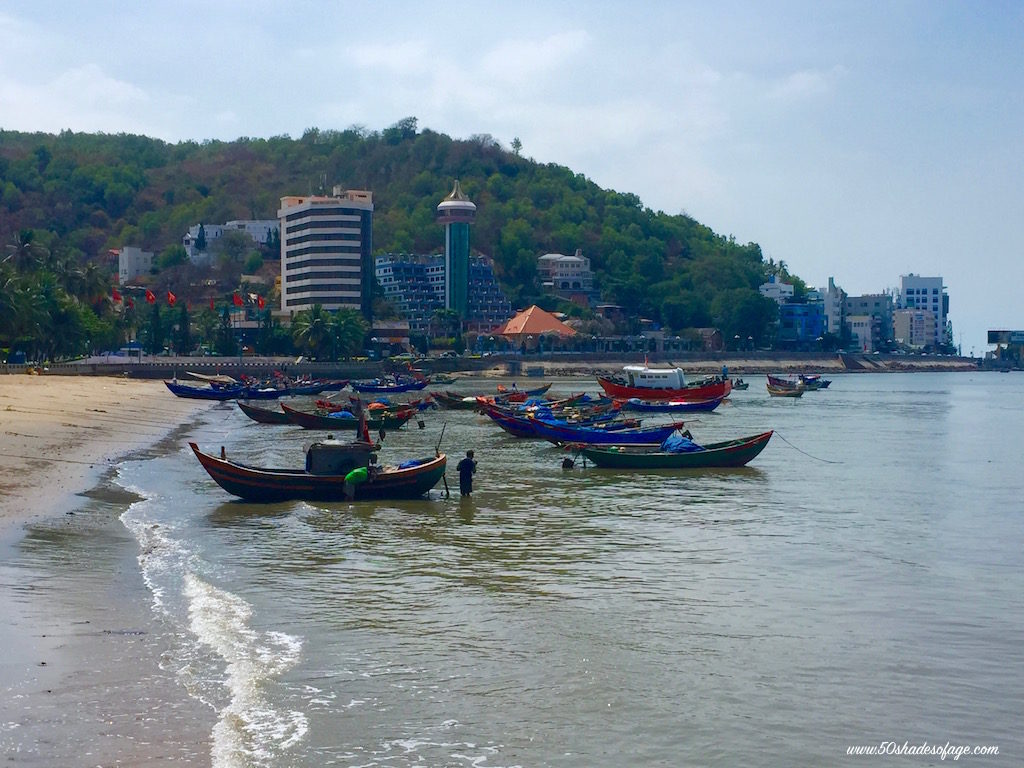 Our arrival in the city coincided with the preparations for the Vietnamese Lunar Year celebrations and we were aghast at the money being spent on decorating the park where the celebrations were to take place. It looked as if no expense was spared with hundreds of potted plants, colourful flower towers and automated monkeys. 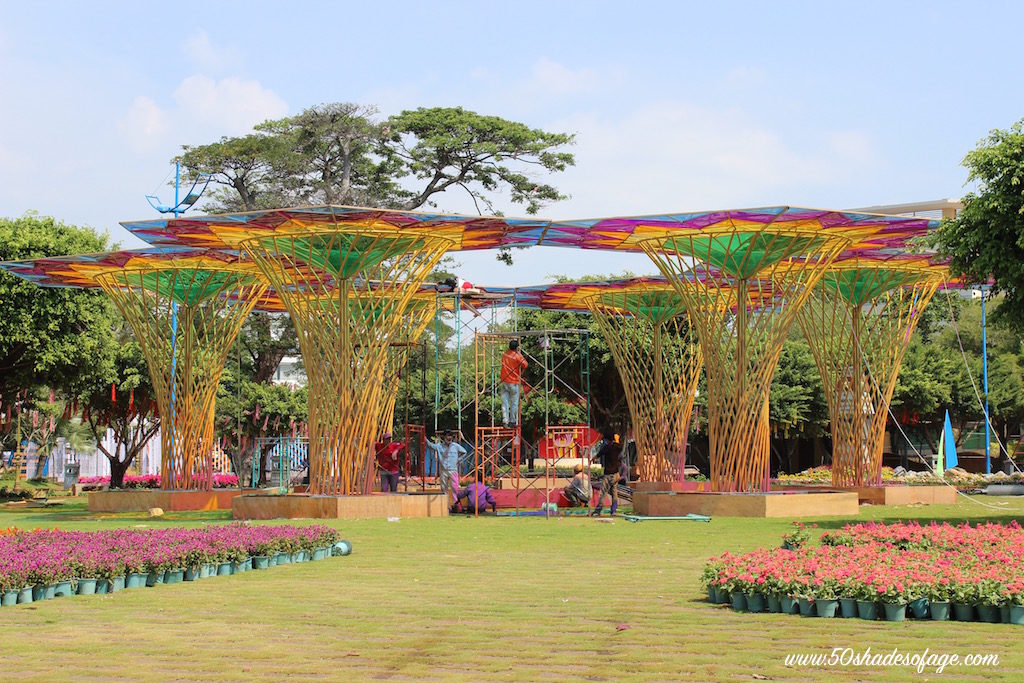 Directly across the road from the park we were set upon by an elderly Vietnamese man with his hands outreached begging for money. Such is the paradox of South East Asia – wealth versus poverty!

After a stroll along the beachfront we set off to Thang Tam Temple and the Statue of Jesus with outstretched arms on top of Small Mountain. 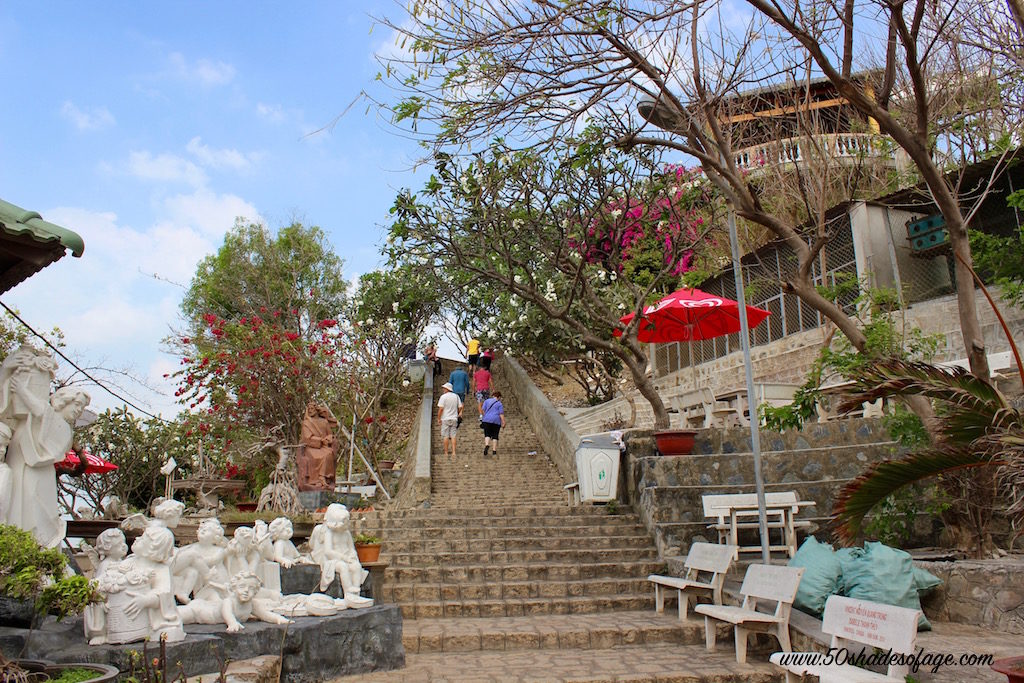 We scaled over 800 steps in the heat and humidity to the top of Small Mountain to view the enormous 28m figure of Jesus gazing across the East Sea. By the time we reached the penultimate flight of stairs we were all gasping for breath and sweating profusely. Along the way we saw many other smaller statues of Mary, baby Jesus and angels. 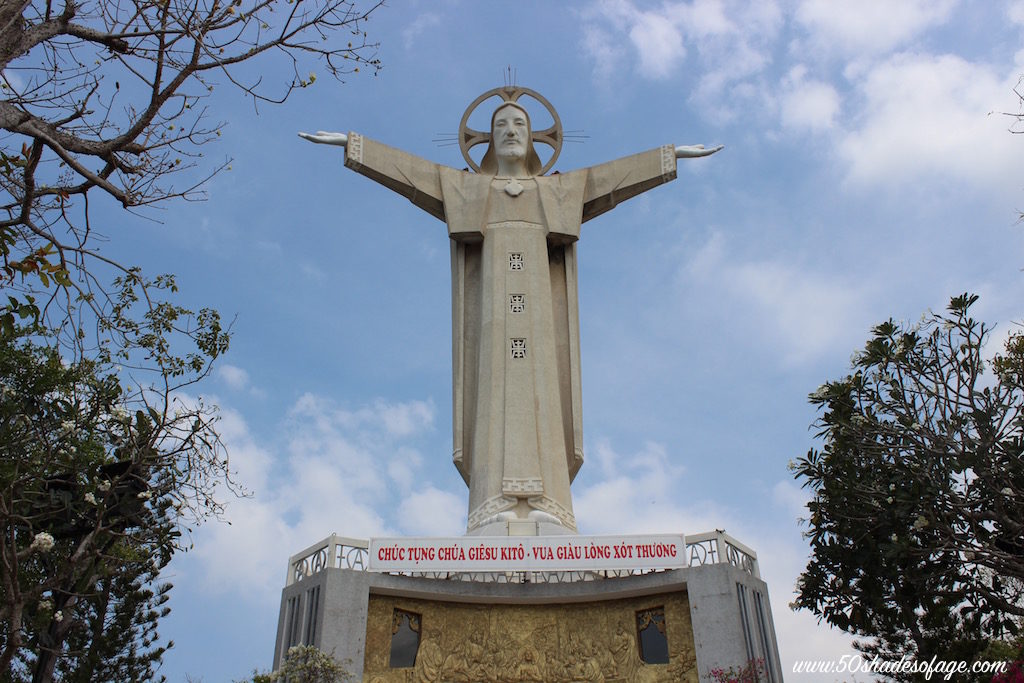 From the top of Small Mountain you are rewarded with 360 degree panoramic views over the sea and cityscape. You may also climb inside the statue which contains a spiral staircase of 129 steps, ascending from the foot of the statue to its neck. After struggling up 800 odd steps on a hot humid day we passed on this! 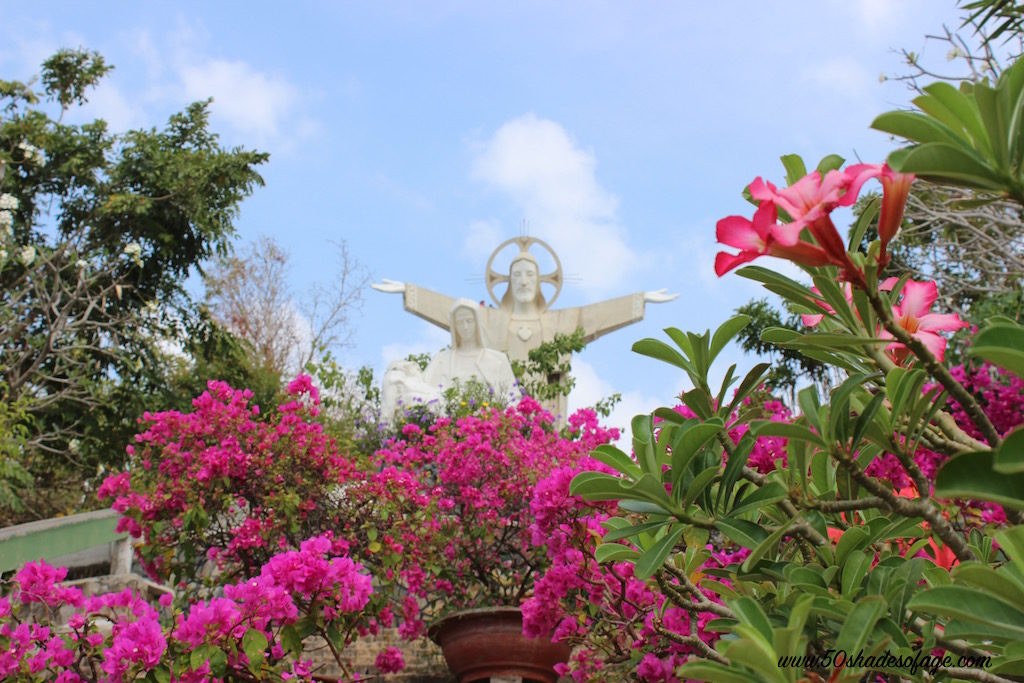 Next point of interest was Bach Dinh (Villa Blanche) a colonial mansion built by the French (1898-1916) as a summer holiday house of French Governor General Paul Doumer. With shuttered windows allowing a cool breeze to waft through the residence, it was a refreshing change from Small Mountain and those endless stairs! 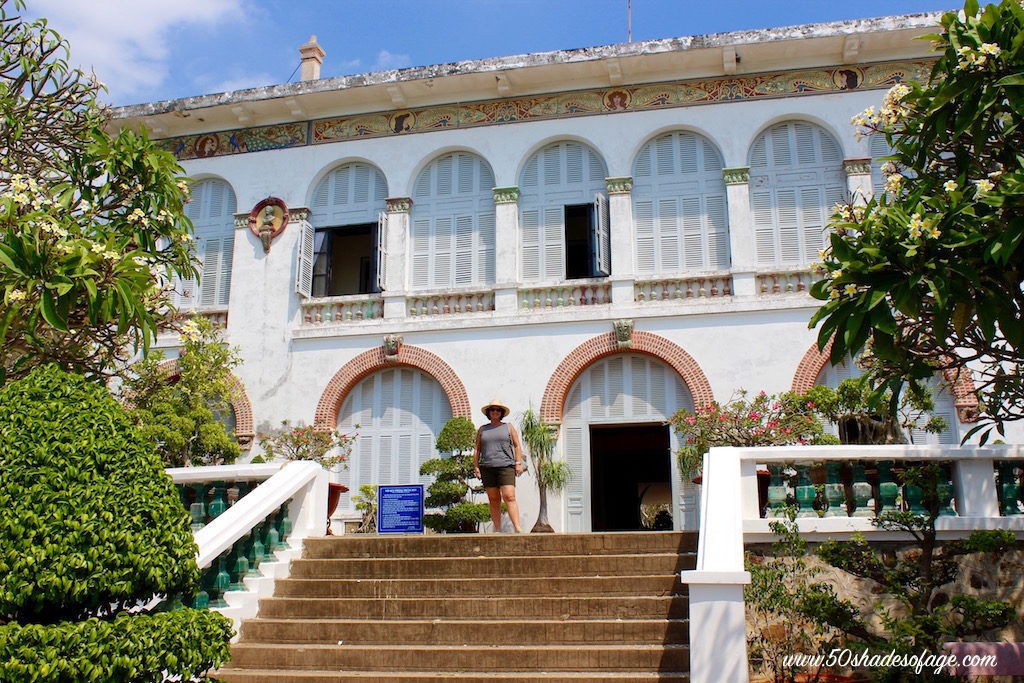 The location on the slope of Big Mountain gives lovely views of Front Beach. The mansion is protected by French canons all around and beautiful fragrant Frangipani trees surround the building. Inside Villa Blanche there are exhibits of hundreds of artefacts and antiques collected from Cau Islet-Con Dao. 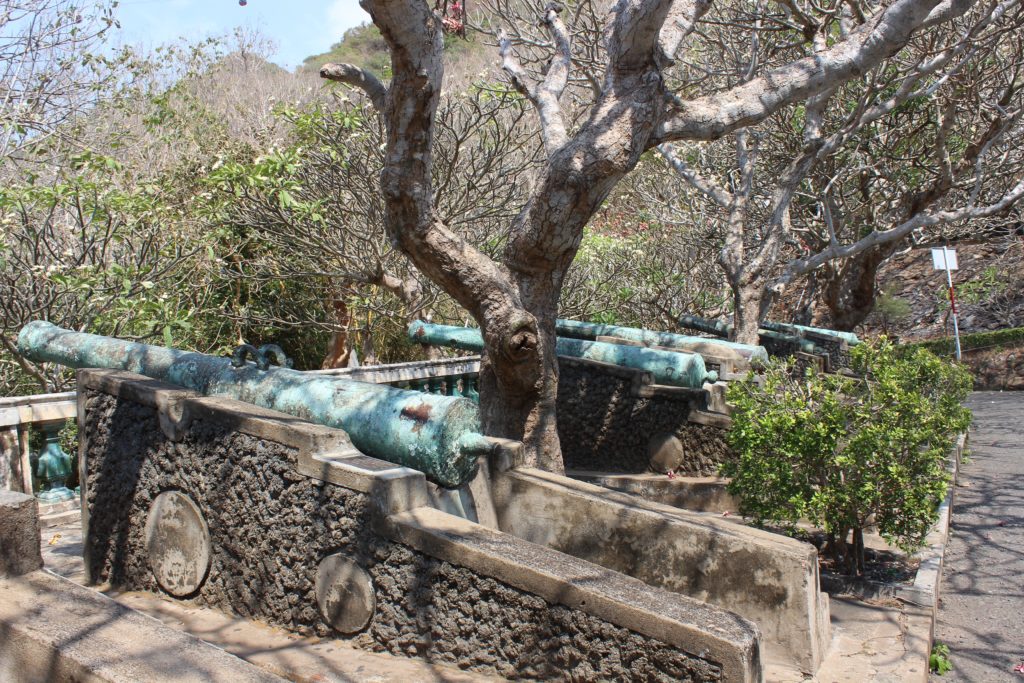 Not far off the promenade is the Tran Hung Dao monument which sits here as a tribute to this brilliant military strategist who defeated two Mongol invasions during the Tran Dynasty (1225 to 1440) and became a cultural hero among modern Vietnamese. 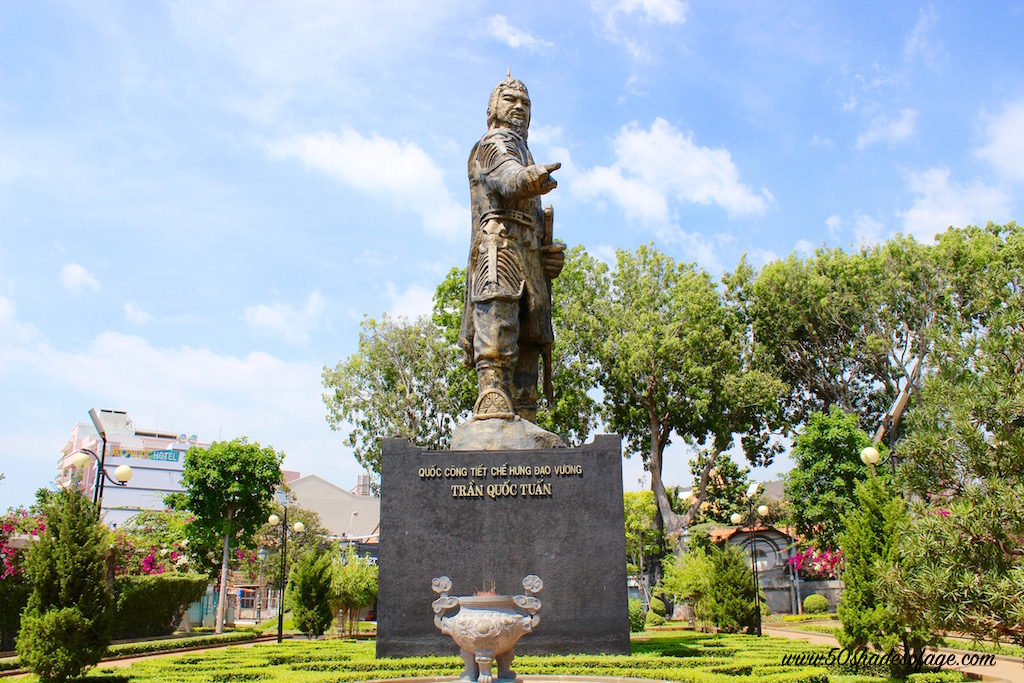 After an interesting and difficult lunch ordering process (due to language barrier) we enjoyed a long leisurely seafood lunch and a couple of Singha beers at one of the restaurants in town. Like a lot of restaurants in Asia, there were fish tanks at the entrance to the restaurant where you could select your own fresh live seafood and have it cooked to your taste. 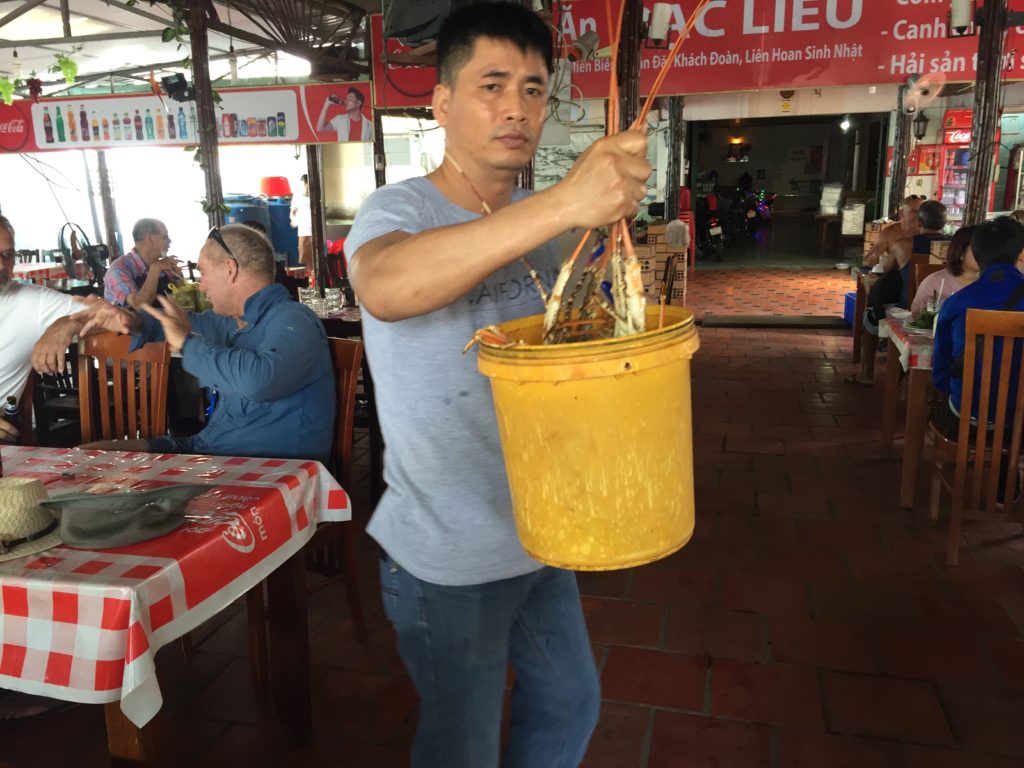 After a day of seeing the sights of Vung Tau our cab driver for the day transported us back to the port and to our ship the Sapphire Princess. Vung Tau gave us another side to Vietnam which we found educational and interesting. We were all very happy to visit here instead of Ho Chi Minh City.

Spread the love
Travel-VietnamVietnamVietnam WarVung Tau
By 50 Shades, May 6, 2016 Kathy was a 50 something year old when she started up this blog 6 years ago, but has since turned over another decade and is now in her early 60s. She is married with two adult children and lives on the Tweed Coast of New South Wales, Australia. Kathy enjoys living life to the fullest and loves to keep fit and active by maintaining a healthy diet and exercising regularly. Some of her interests include reading, photography, travelling, cooking and blogging! Kathy works part-time as a freelance writer but her real passion is travelling and photographing brilliant destinations both within Australia and overseas and writing about it.