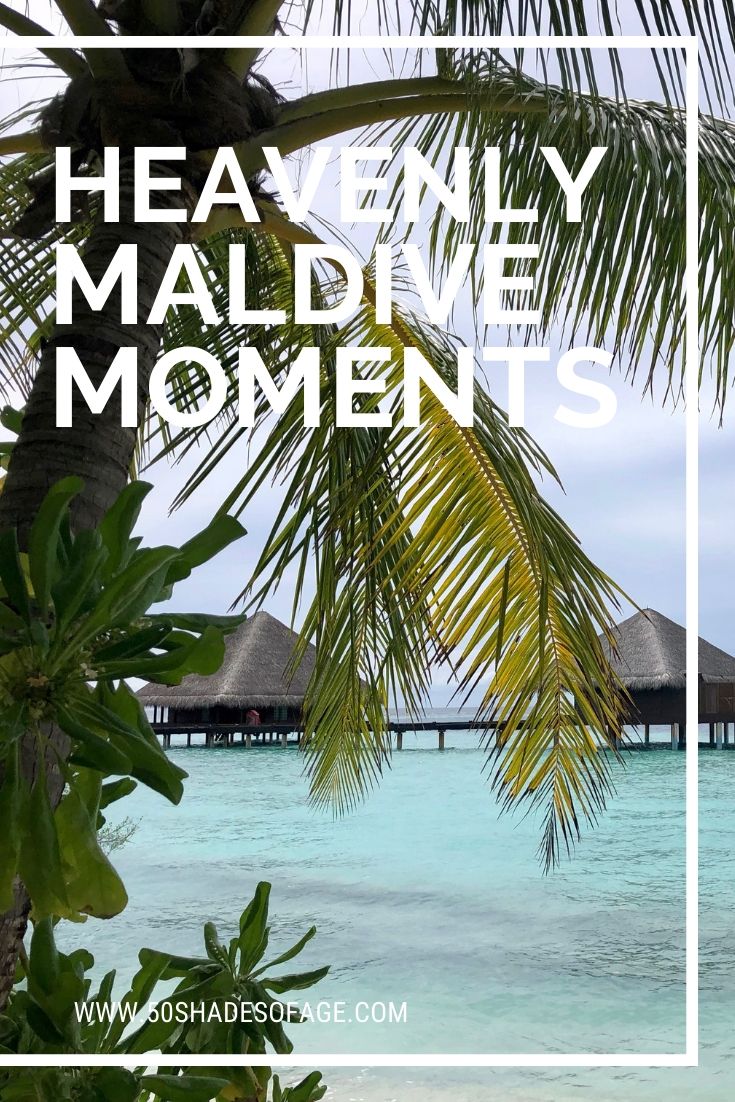 After a week touring Sri Lanka we were in for a big treat. We caught a short flight from Colombo to Malé, the capital of Republic of Maldives, then boarded a boat to the island of Rannalhi. Here we were to be indulged in many heavenly Maldive moments as we had 5 blissful days in this tropical paradise.

Although the sea conditions were extremely rough that particular day, and we barely kept our lunch down on the boat transfer to Rinnalhi Island, once we arrived we were all in awe. Thoughts of throwing up over the side of the boat soon disappeared as we pulled into the long jetty to our island paradise. 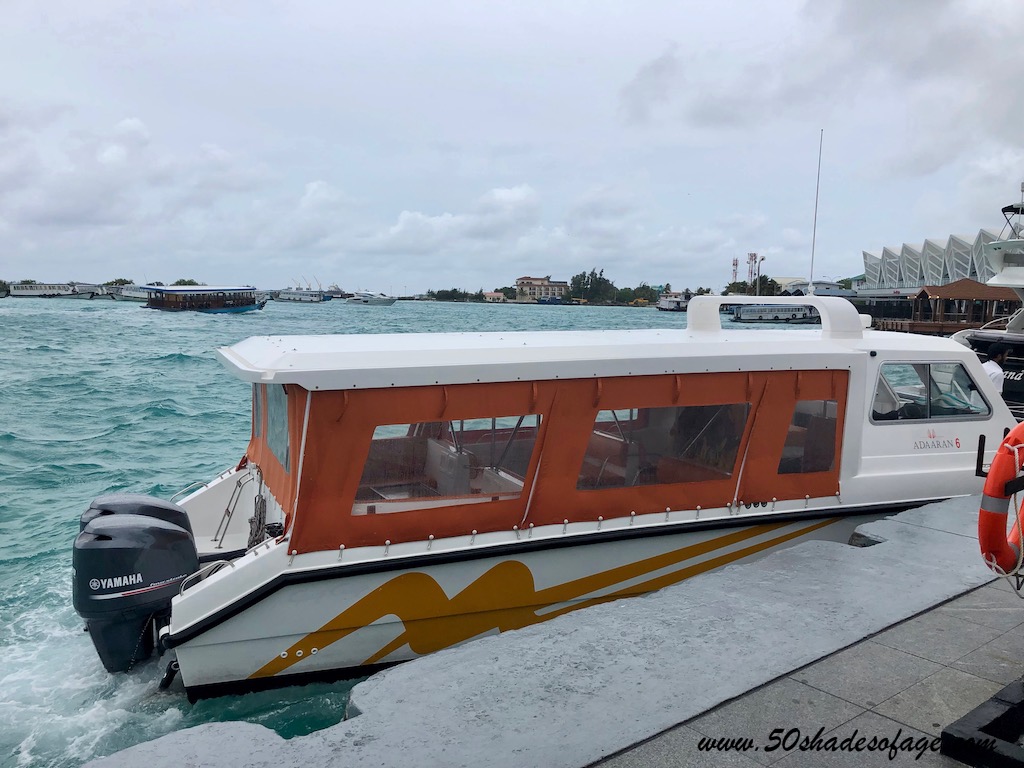 Our boat from Male Airport to the island

But first, a little background on the Maldive Islands. Located in the Indian Ocean in South Asia, The Maldives are composed of 26 ring-shaped atolls, which are made up of more than 1,000 coral islands. Comprising a territory spanning roughly 298 square kilometres and only having a population of 427,756 inhabitants. 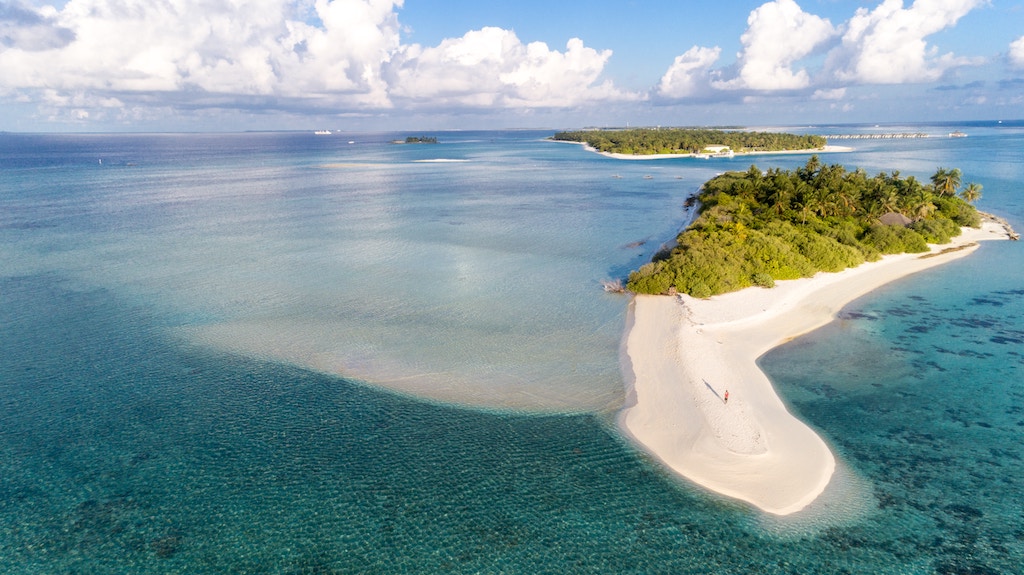 The Maldives is the lowest country in the world, with natural ground levels between only 2.4 metres and 1.5 metres above sea level. More than 80 per cent of the country’s land is composed of coral islands which rise less than one metre above sea level and it has a tropical monsoon climate.

It became a republic in 1968 after being under British rule and at present Islam is the official religion of the entire population, as adherence to it is required for citizenship. 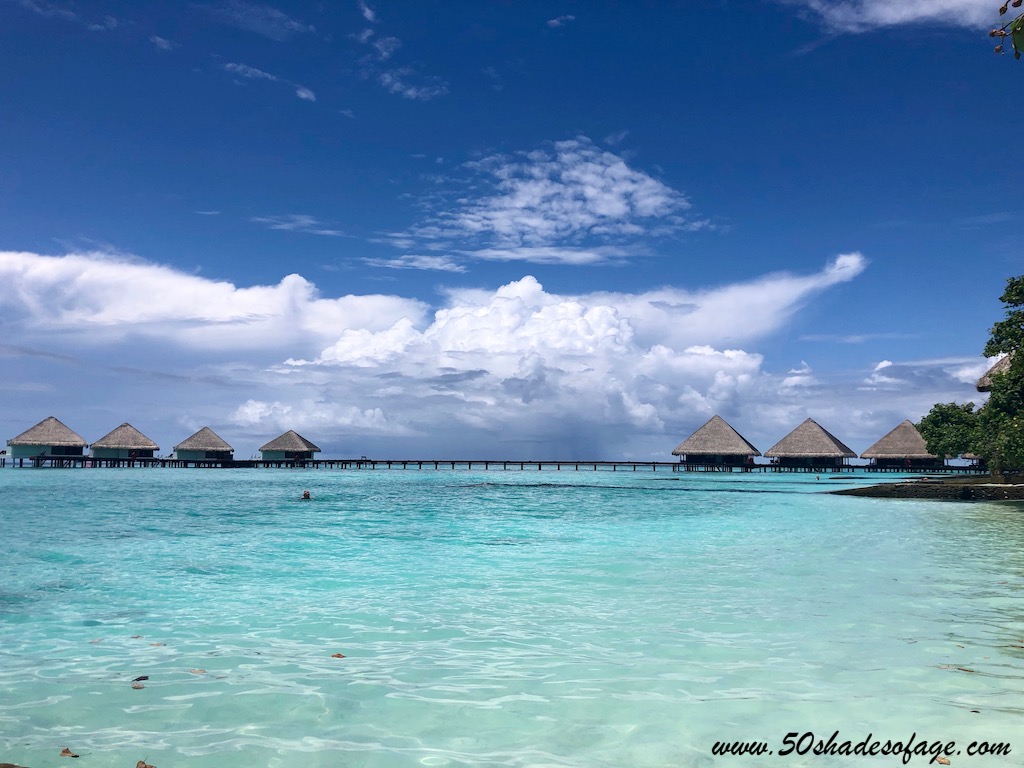 Most islands feature over the water bungalow accommodation

Fishing has historically been the dominant economic activity, and remains the largest sector by far, followed by the rapidly growing tourism industry. 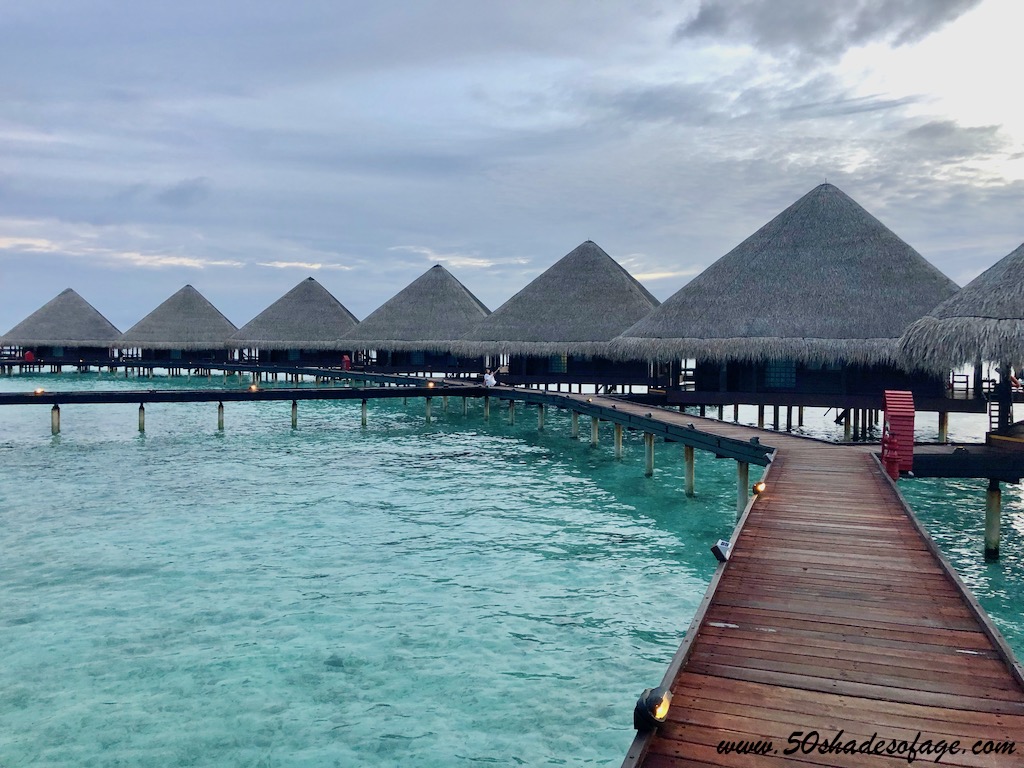 Over Water Bungalows on Rinnalhi Island

Rannalhi Island sits exclusively at the tip of the South Male atoll with access to pristine beaches, excellent scuba diving and snorkelling opportunities and a relaxed environment. 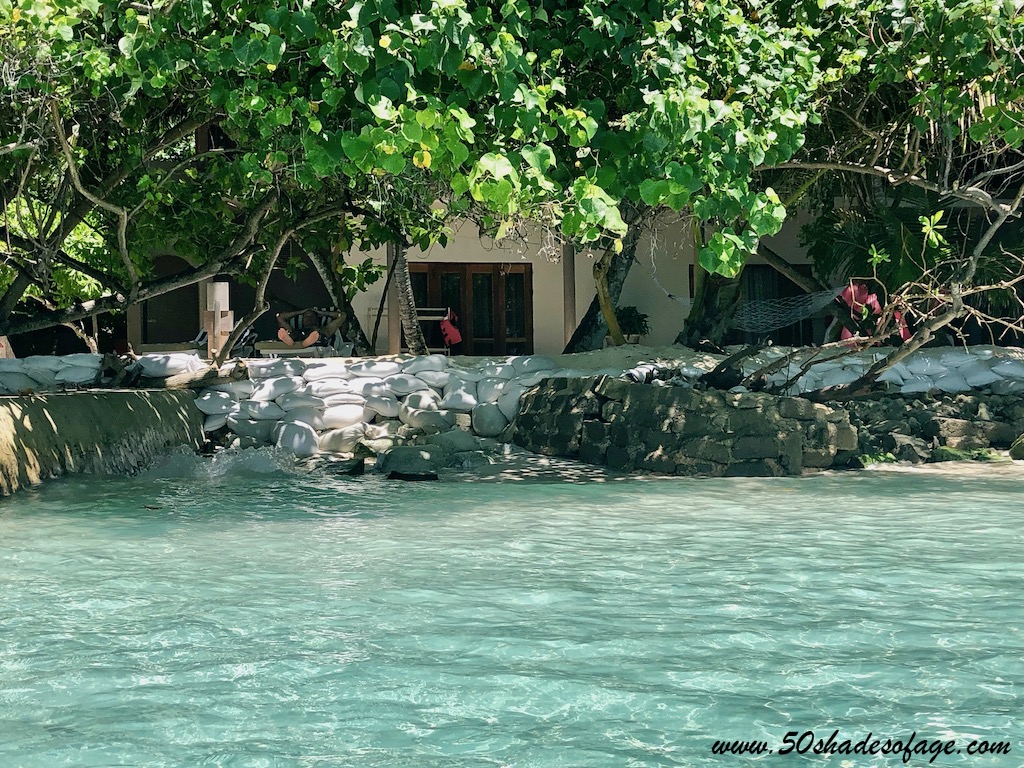 Our room behind the trees

There are also 14 elegant over-the-water bungalows that are accessed by long jetties over the clear turquoise waters. These bungalows allow unrestricted access to the ocean waters via a wooden ladder and feature private sun decks. All bungalows are elegantly appointed and are equipped with the latest modern amenities.

Arriving at Rinnalhi Island by boat

The resort features a large open-air restaurant that serves up buffet style food for breakfast, lunch and dinner. There are two beach bars on the island, with one having a large deck out over the water. The bar on the northern tip of the island is particularly good for sunset drinks with the sun dipping between the bungalows over the water. 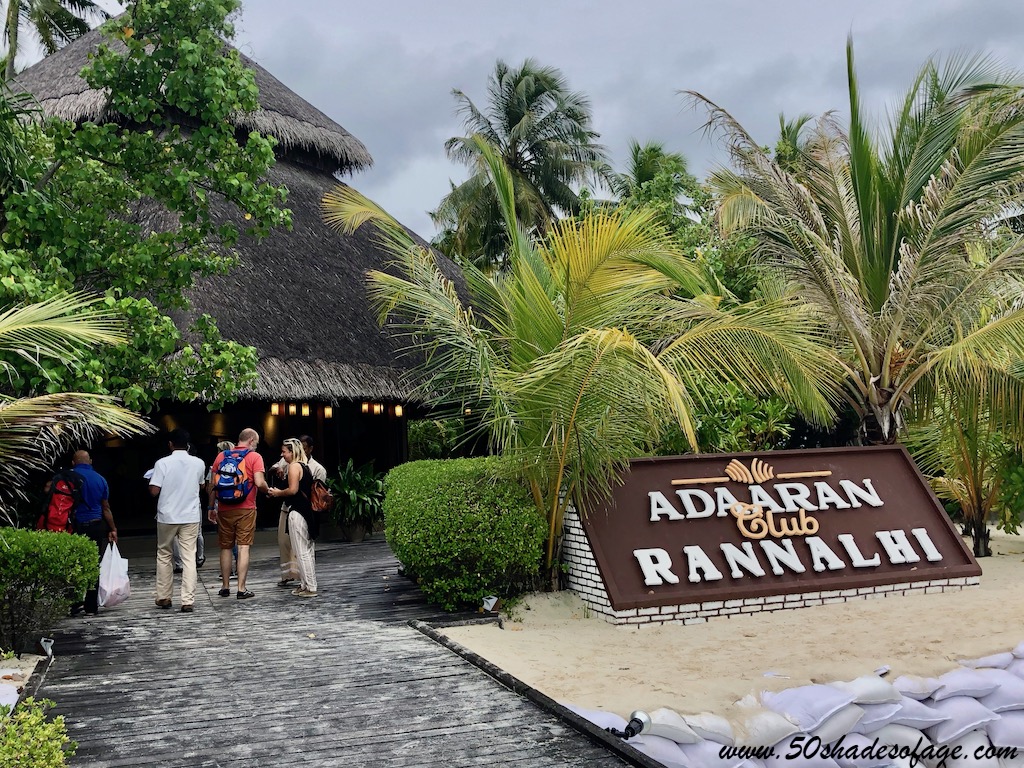 Jetty to the reception area at Rannalhi Island 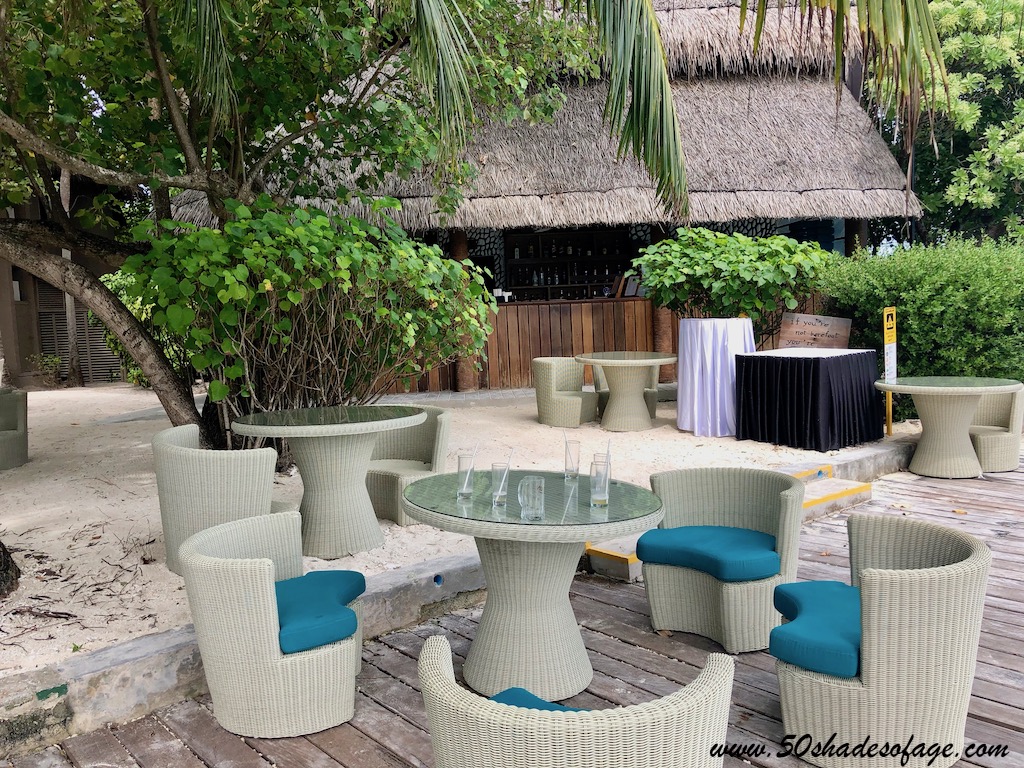 One of the bars at the Adaaran Rinnalhi

Things to do on Rinnalhi Island

There are a few excursions available from the resort, plus you can partake in exciting activities such as windsurfing, kayaking, standup paddle boarding and fishing. You can also hire snorkel gear and snorkel in the water just off the island. 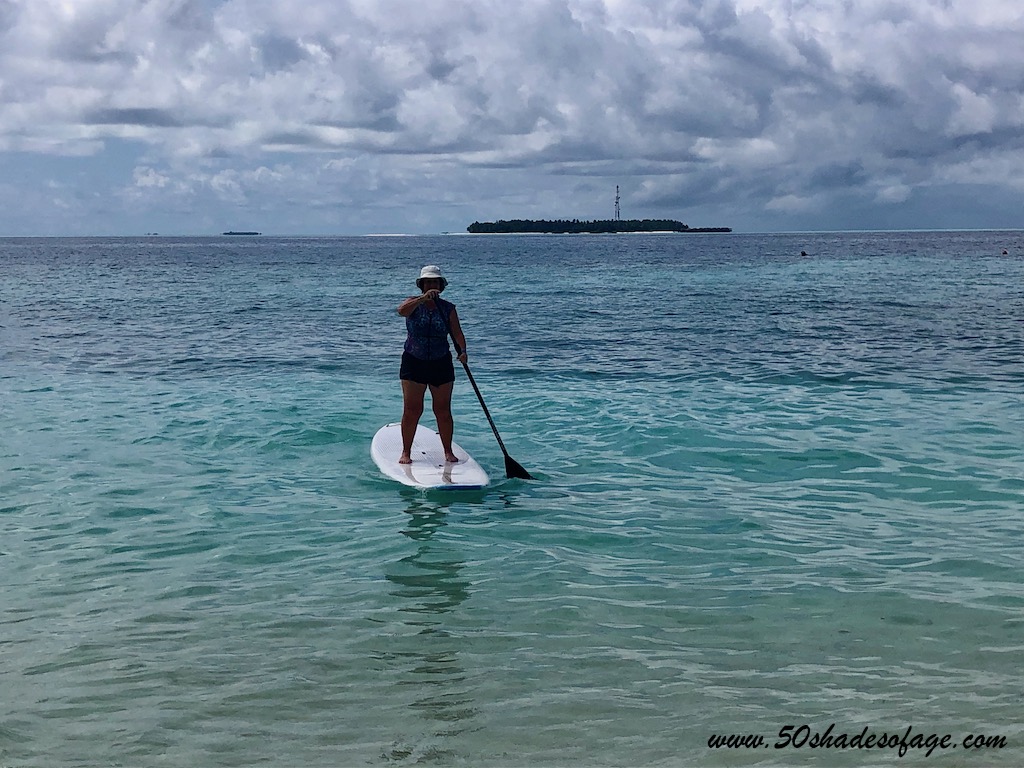 Stand up paddleboarding at Rinnalhi Island

We took a snorkel boat trip to two different reefs around 10 minutes off the island. The coral reefs were amazing and we saw an abundance of sea life, colourful reef fish, sea turtles and pretty corals. My husband also did a couple of scuba dives that are available from the dive centre at the island. You can even have an introductory dive free of charge. 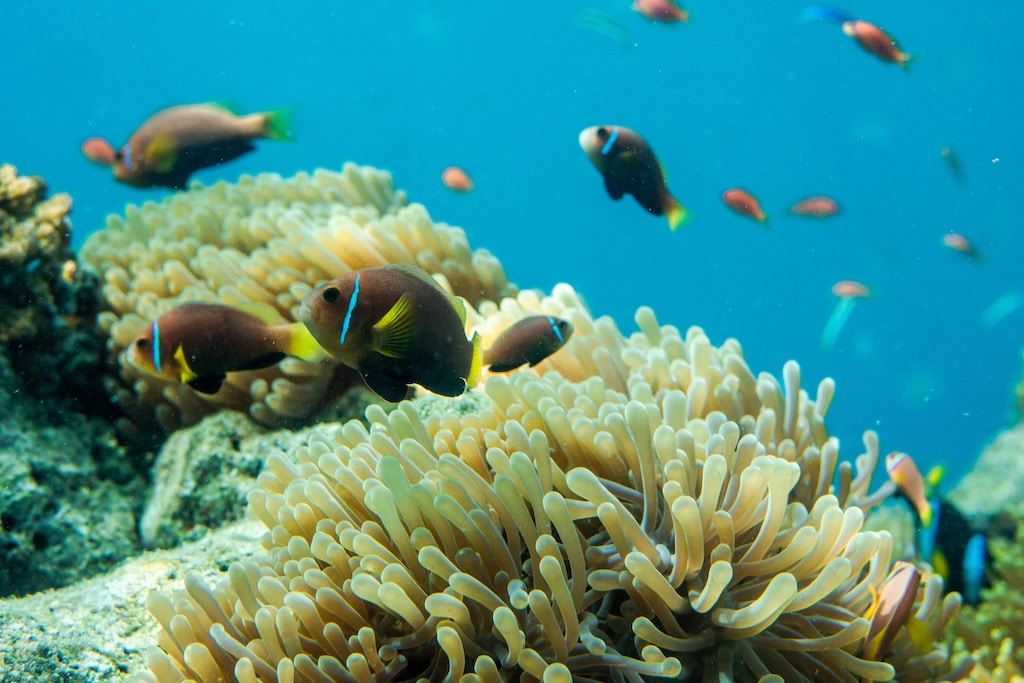 My husband did a scuba dive refresher course and then went out on another scuba dive a few days later. He reported that he saw a remarkable quantity and variety of marine life and coral. He also went out on a late afternoon fishing trip in the deeper waters off the island but unfortunately returned empty handed. If you’re lucky enough to catch a fish the restaurant will cook it up for you for your dinner. 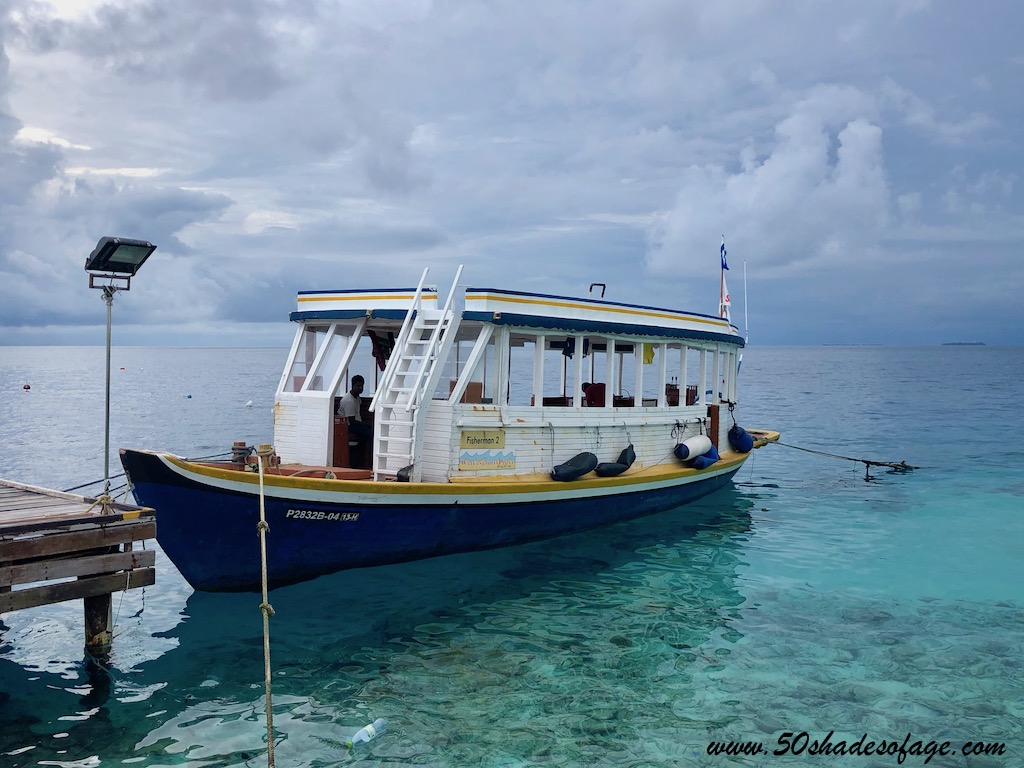 Early on our third morning on the island we went shark feeding on one of the boats. The tawny nurse sharks were attracted to the boat by scraps of fish thrown overboard and fish heads attached to hooks. There were at least 30 of these marine creatures circling the boat at one time and they ranged in size up to 2 metres in length. 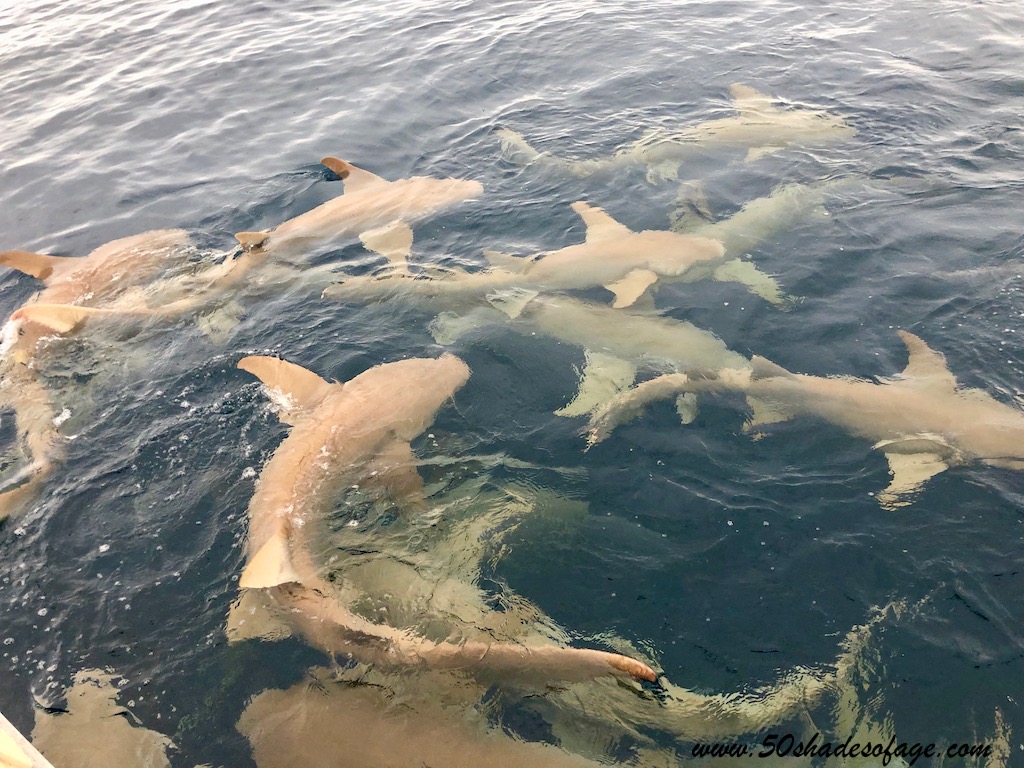 Whilst my husband was scuba diving I took myself off to the day spa where I indulged myself in a total body scrub and exfoliation (great for getting rid of dry skin), and a pedicure. The Chavana Spa attendants were all Balinese and we know how good they are at massaging and beauty treatments. It was a luxurious and super-relaxing experience. 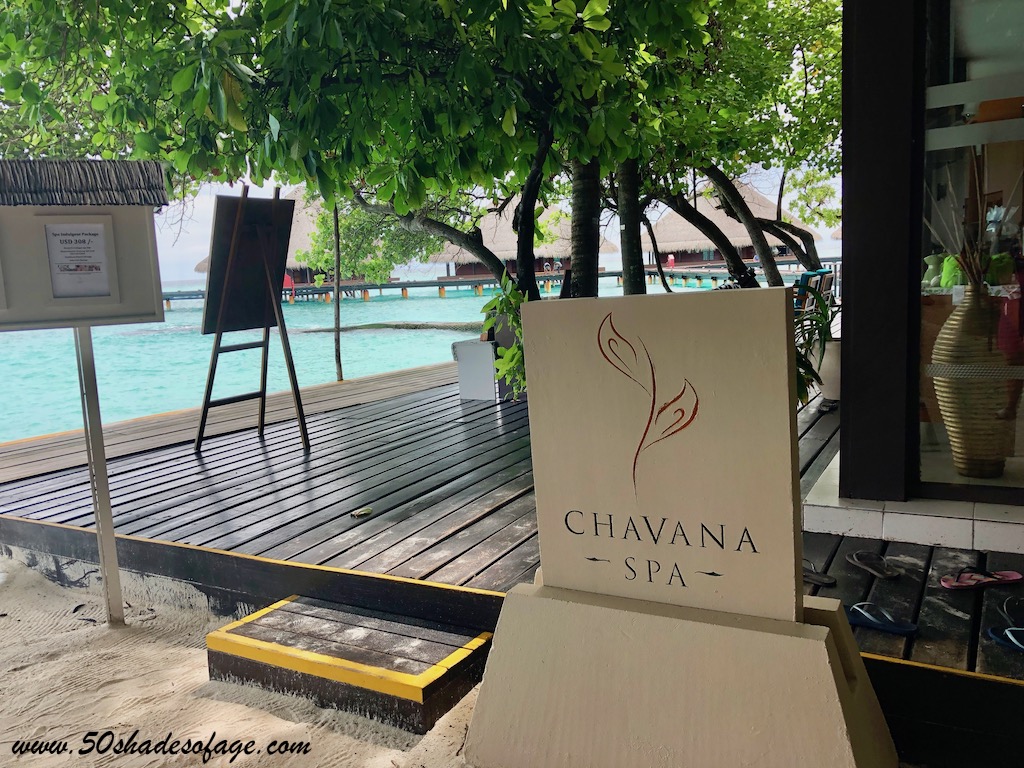 The Day Spa at Rannalhi Island

Amongst other things to do on the island are table tennis, beach volleyball, beach football, swimming and water skiiing. Or simply sit back and relax on your own sun lounge or hammock on the sandy beach, swinging between two palms. But one of the best things to do is taste some of the cocktails on the bar deck over the water – there are even non-alcoholic ones! 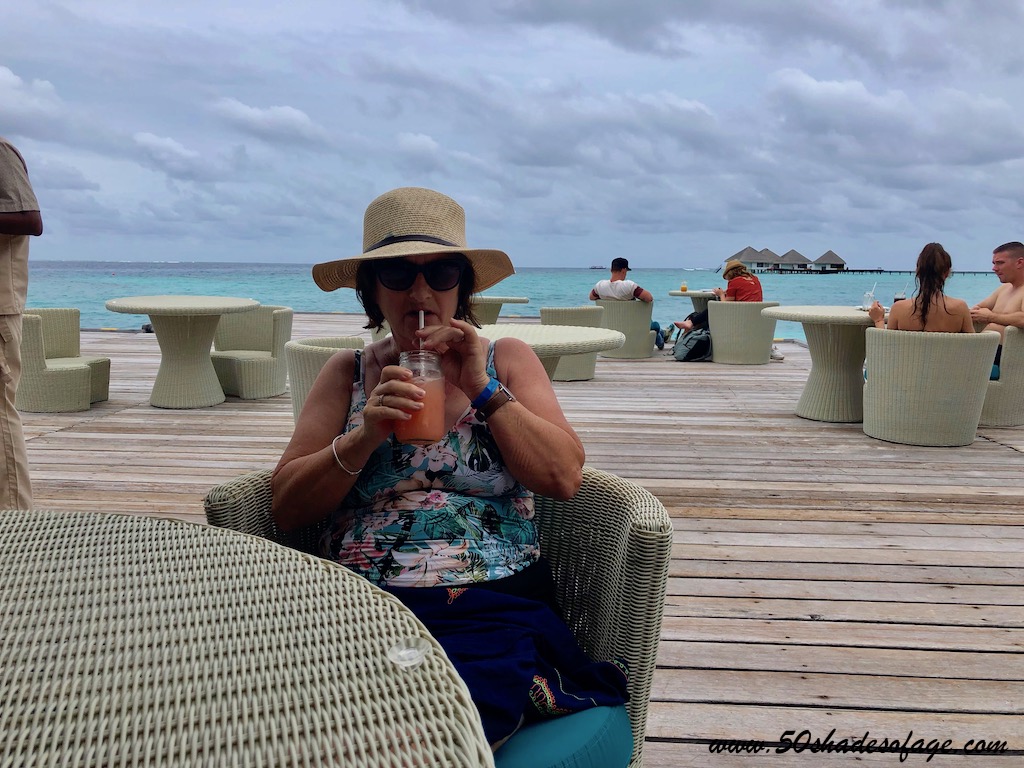 Trying one of the cocktails on the deck at the bar

If you really feel the need to leave the island for the day (but why bother?), there are a couple of day excursions on offer: 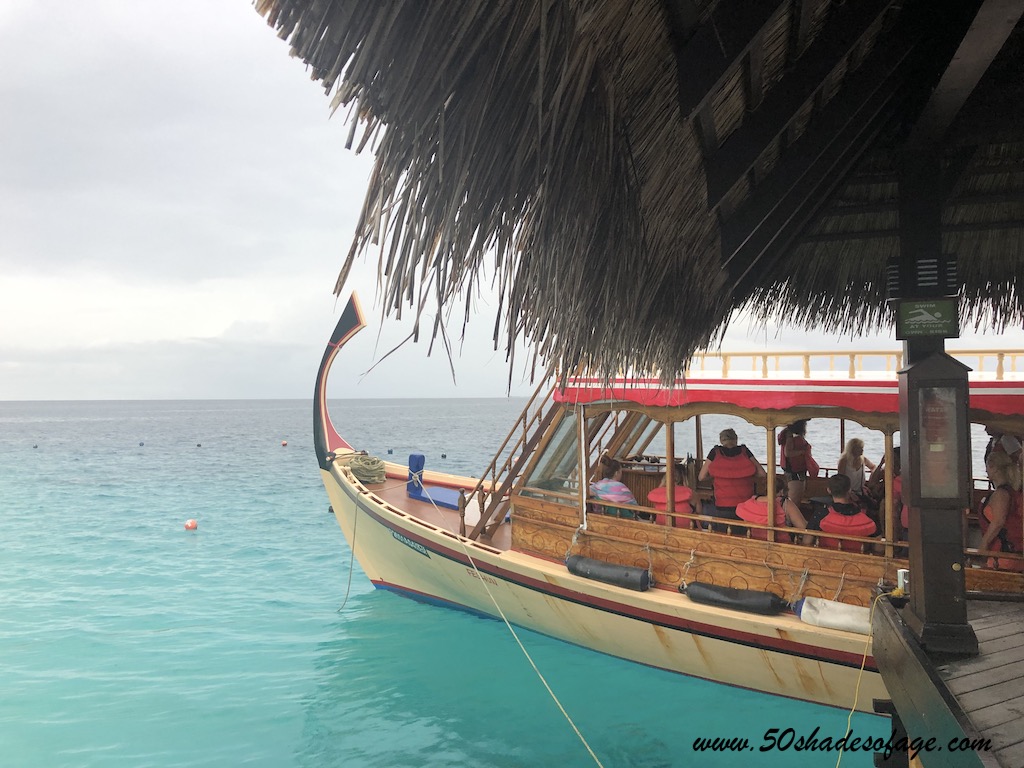 Off on a day excursion

The resort’s main restaurant had an open air layout with a traditional Maldivian thatched roofing. The daily buffets offered a lavish spread featuring a diverse array of cuisine. The changing theme nights highlighted cuisines from around the world ranging from Asian to Western fare plus delicious seafood fresh from the local fishing boats. 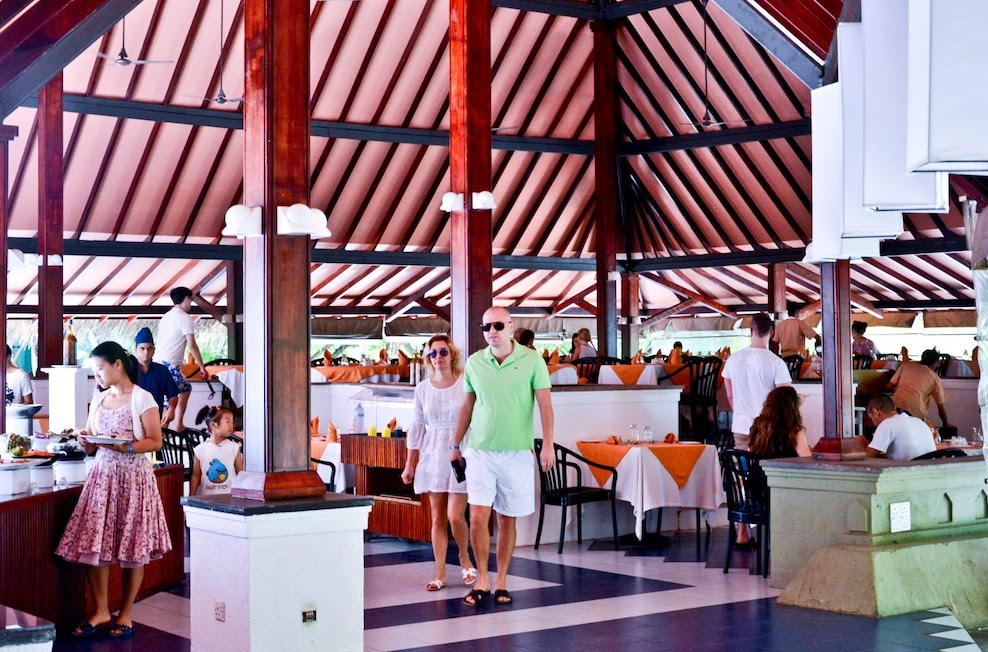 The Buffet Restaurant at Adaaran Rannalhi

I particularly enjoyed some of the local dishes like samosas, roshi or chapati (flatbreads), vegetable curry and fish curry made with a strong coconut and lemon flavour.

You can request in room dining for those intimate moments under the dazzling night sky or a private candlelit dinner on the beach is also available upon request.

Without a doubt, one of the most enjoyable experiences on Rinnalhi Island is cocktail hour at Nika Bar at the northern end of the island, witnessing the most beautiful sunsets. Here are a couple of photos: 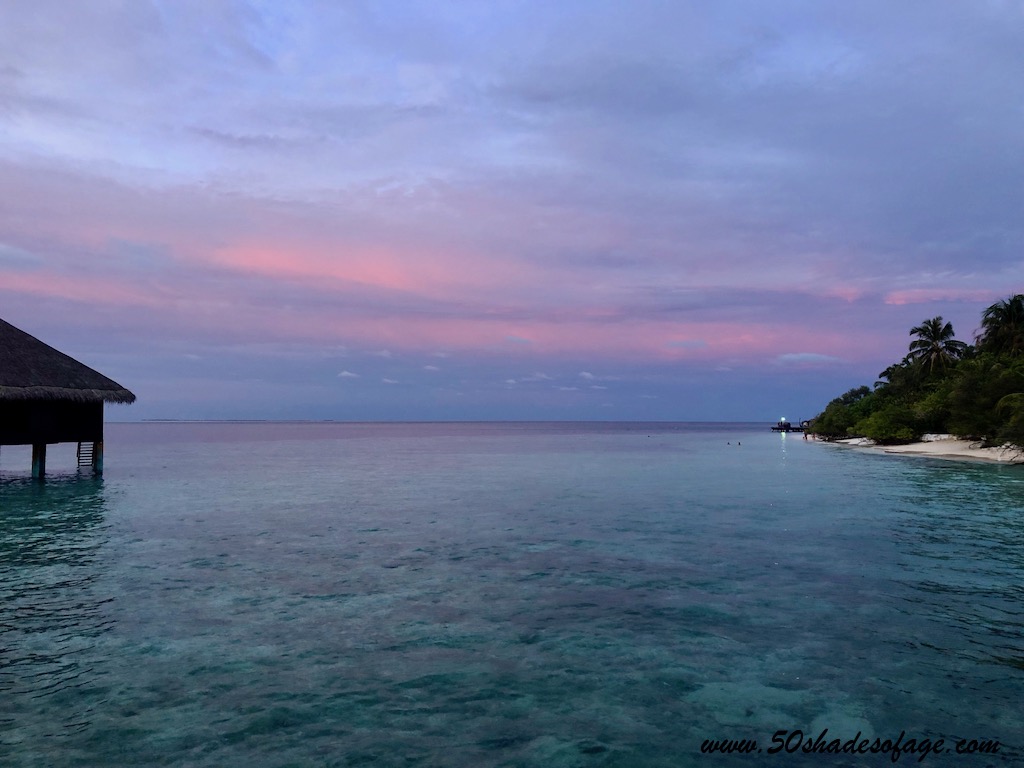 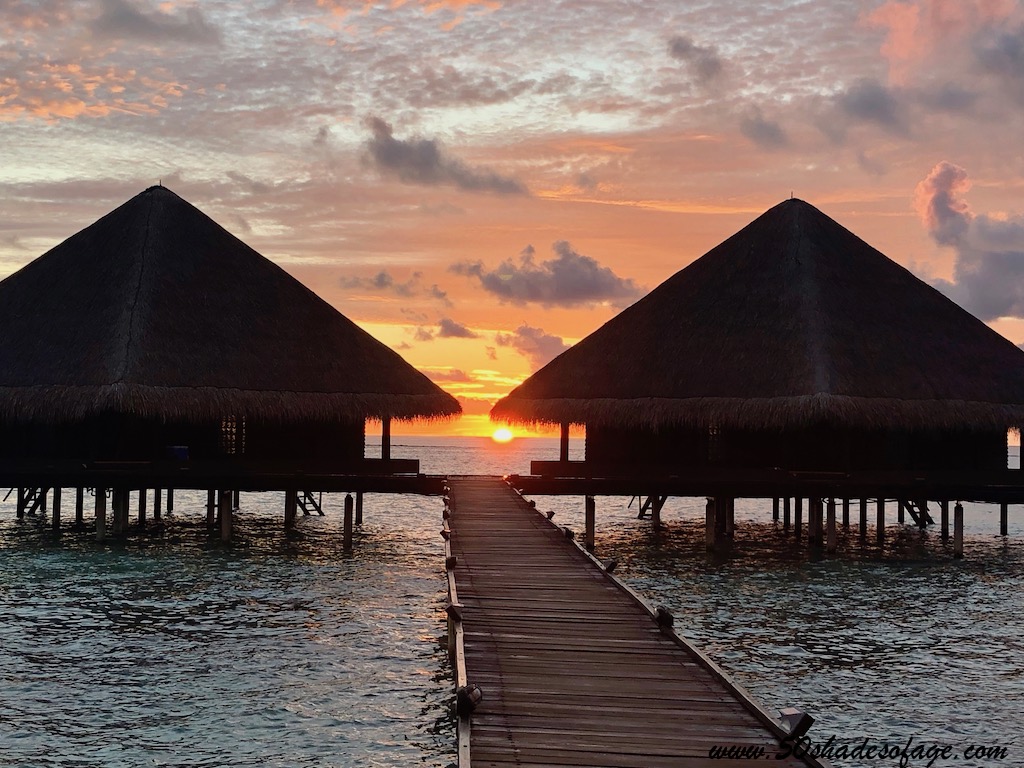 The sun dipping between the bungalows 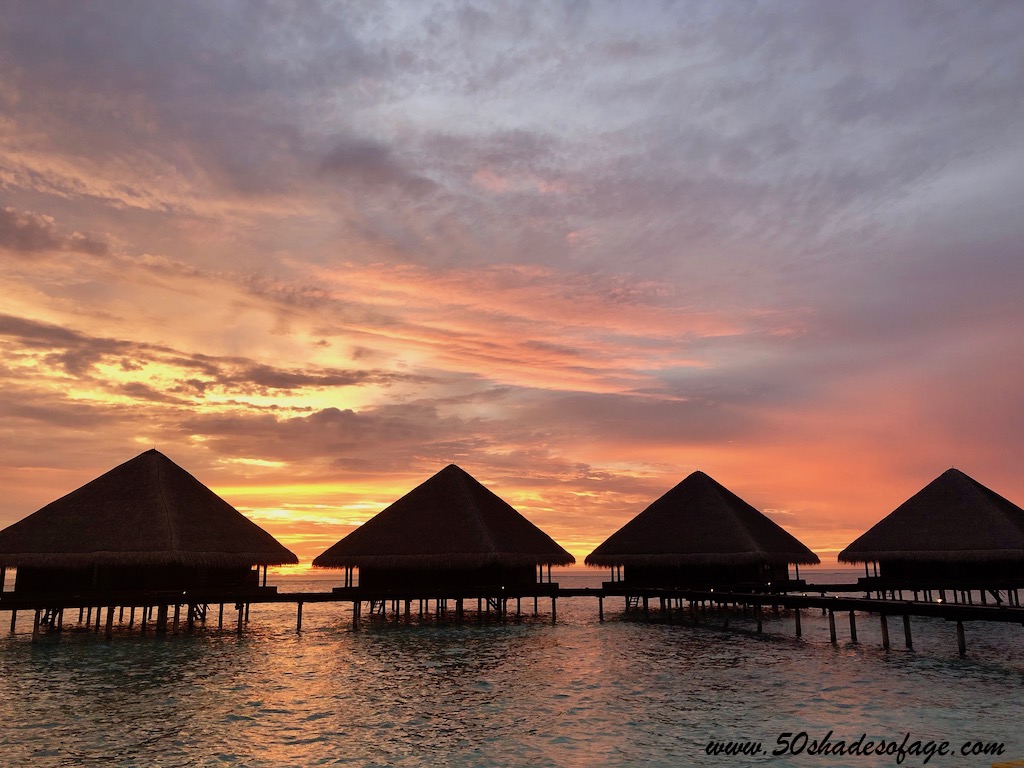 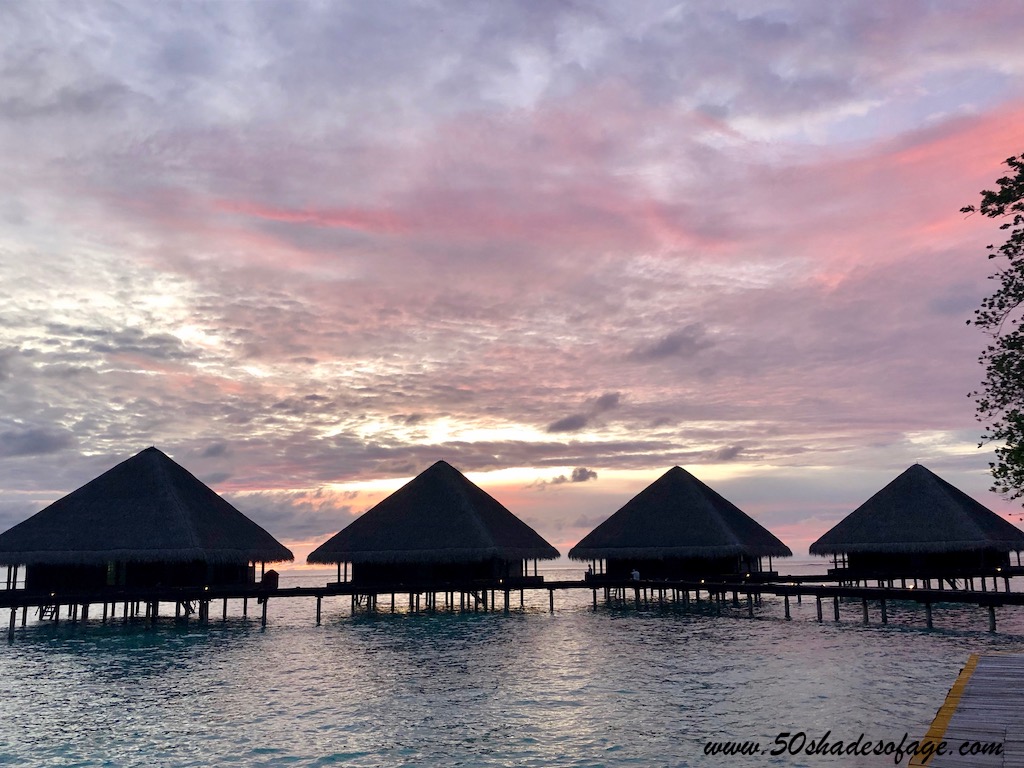 Getting to The Maldives

We flew from Colombo in Sri Lanka via Sri Lankan Airlines but you can also fly from Australia with Singapore Airlines, Garuda Indonesia, Cathay Pacific, China Southern, Etihad, Emirates, Qatar and Air Asia. Flights involve at least one connection, with Singapore a popular stopover point. Once landed at Male Airport there are seaplanes such as Trans Maldivian Airways or Maldivian Air Taxi to the island resorts or resort boats. 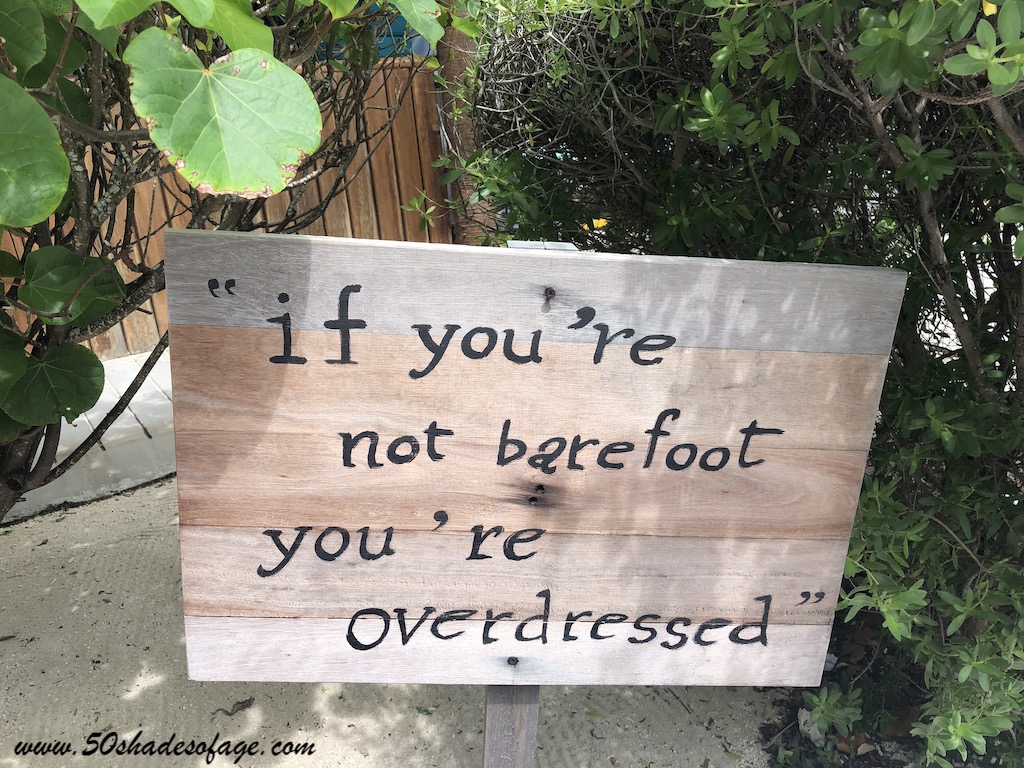 The Maldives are truly captivating and heavenly. They are the ultimate romantic getaway and would be perfect for honeymooners or for couples wanting to reignite their relationship. Although we didn’t have the best weather during our five day stay we totally relaxed and recharged our batteries.

Spread the love
Maldive IslandsRinnalhi IslandThe MaldivesTravel AsiaTropical Paradise
By 50 Shades, October 23, 2019 Kathy was a 50 something year old when she started up this blog 6 years ago, but has since turned over another decade and is now in her early 60s. She is married with two adult children and lives on the Tweed Coast of New South Wales, Australia. Kathy enjoys living life to the fullest and loves to keep fit and active by maintaining a healthy diet and exercising regularly. Some of her interests include reading, photography, travelling, cooking and blogging! Kathy works part-time as a freelance writer but her real passion is travelling and photographing brilliant destinations both within Australia and overseas and writing about it.