A Swim With The Gentle Giants 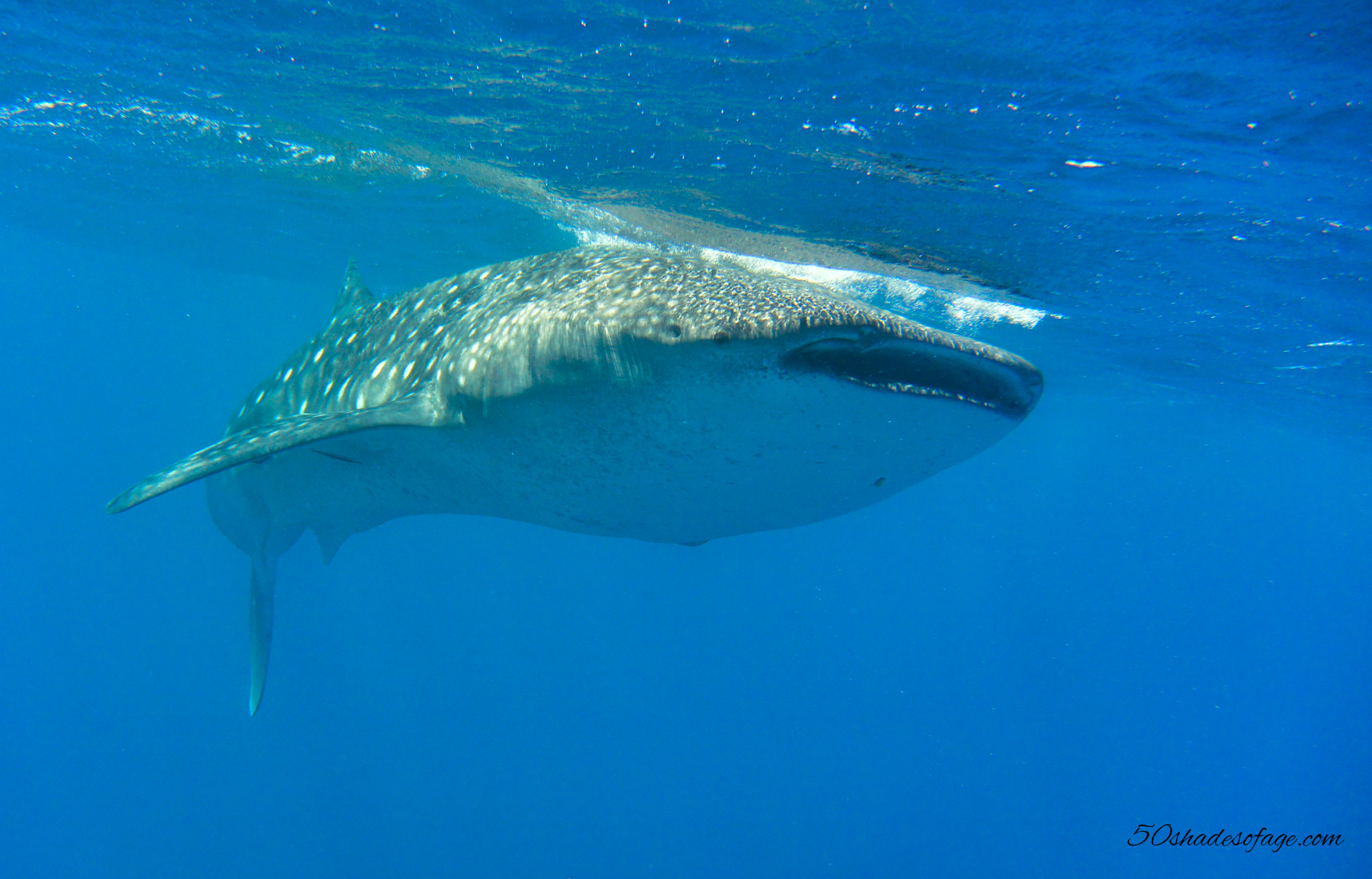 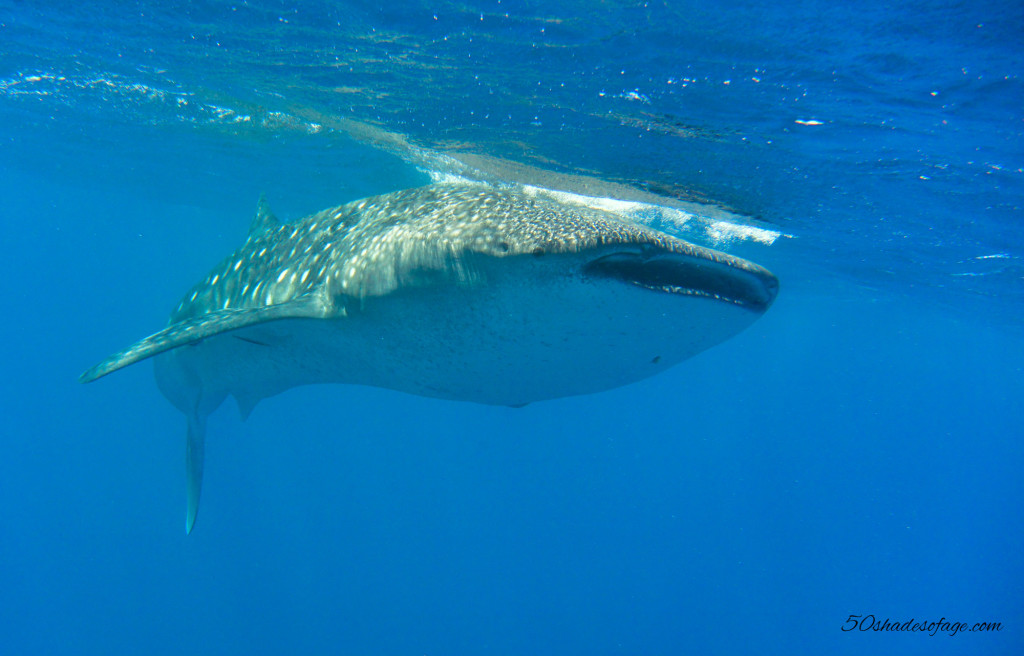 People often ask me what was the highlight of our trip around Australia and I generally reply that “everywhere was special”. However there was an experience that probably stands out in my mind and that was a swim with the ‘Gentle Giants’, the Whale Sharks of the Ningaloo Reef.

Firstly a bit about the Ningaloo Reef. The World Heritage listed Ningaloo Reef begins at Amherst Point south of Coral Bay and stretches 260 Kilometres to Bundegi Reef near the town of Exmouth, West Australia. It reaches 20 kilometres seaward, encompassing a massive 5,000 square kilometres of ocean with 500 species of tropical fish and 220 species of coral. Very impressive to say the least! 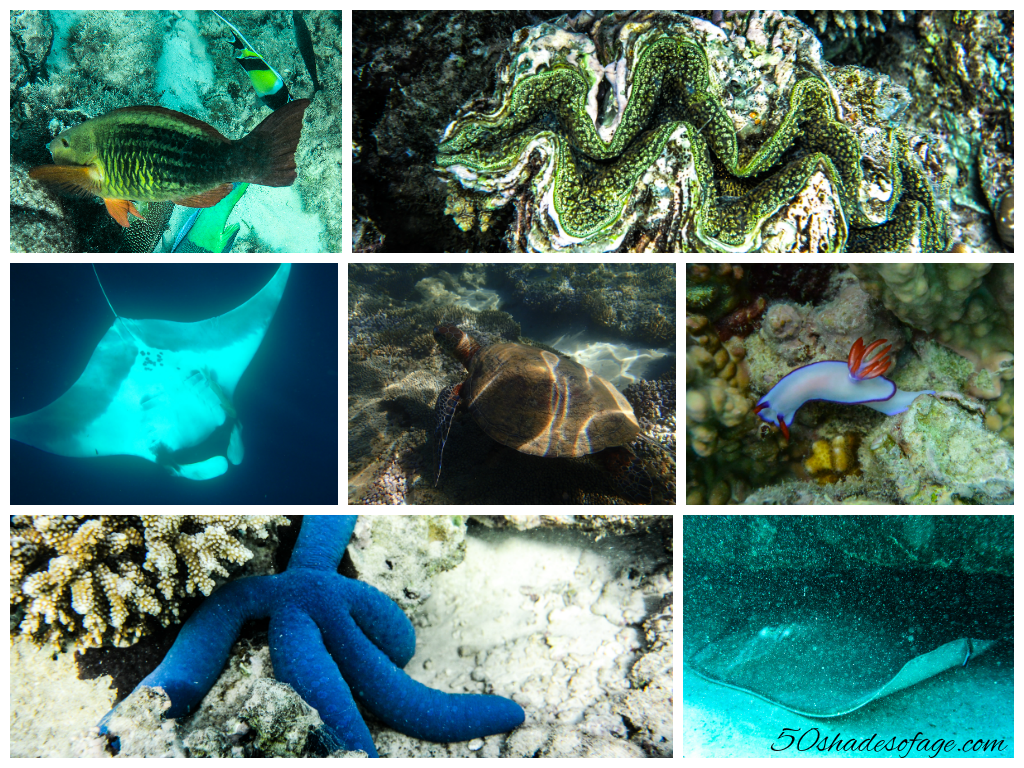 In addition, the Ningaloo Reef is one of the world’s major breeding areas for sea turtles and the feeding ground for the giant Whale Sharks during the months between April and June.  No wonder this area has gained a reputation as one the earth’s last ocean paradises.

Probably the biggest drawcard to the Ningaloo Reef is the opportunity to snorkel with the gentle giants of the ocean, the Whale Sharks.  Every year from April through to July, following the mass spawning of coral, the Whale Sharks congregate in the Ningaloo Marine Park to feed on zooplankton. 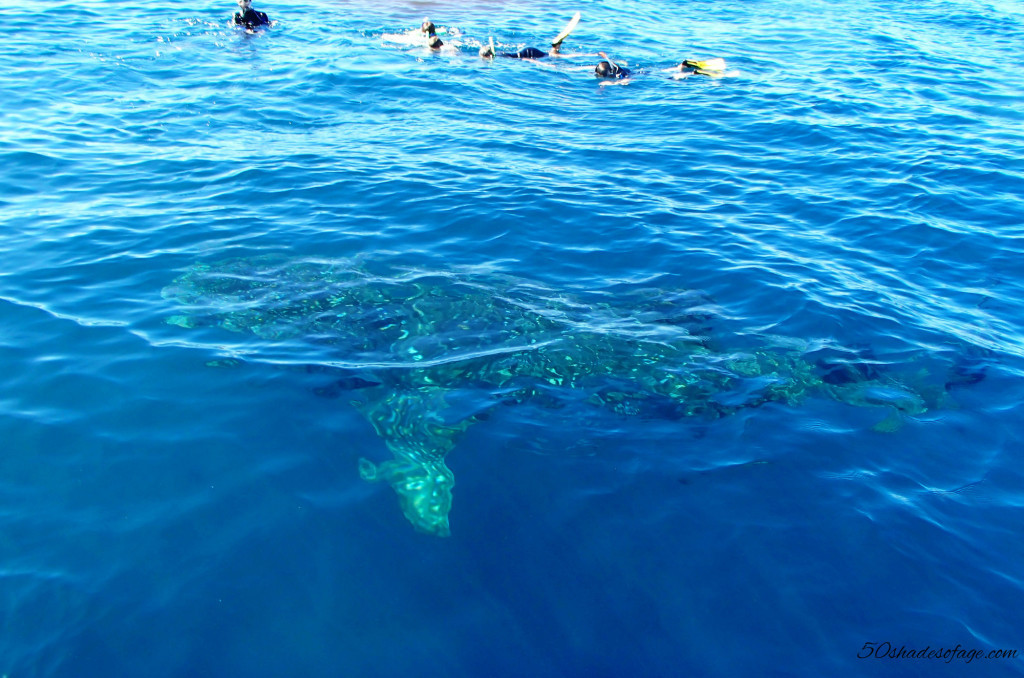 There are many cruise boat operators in both Coral Bay and Exmouth that take Whale Shark cruises on a daily basis during the season. Our cruise of choice was with Ningaloo Whale Sharks which we discovered stood out from the rest because of its uniquely painted Whale Shark patterned boat. 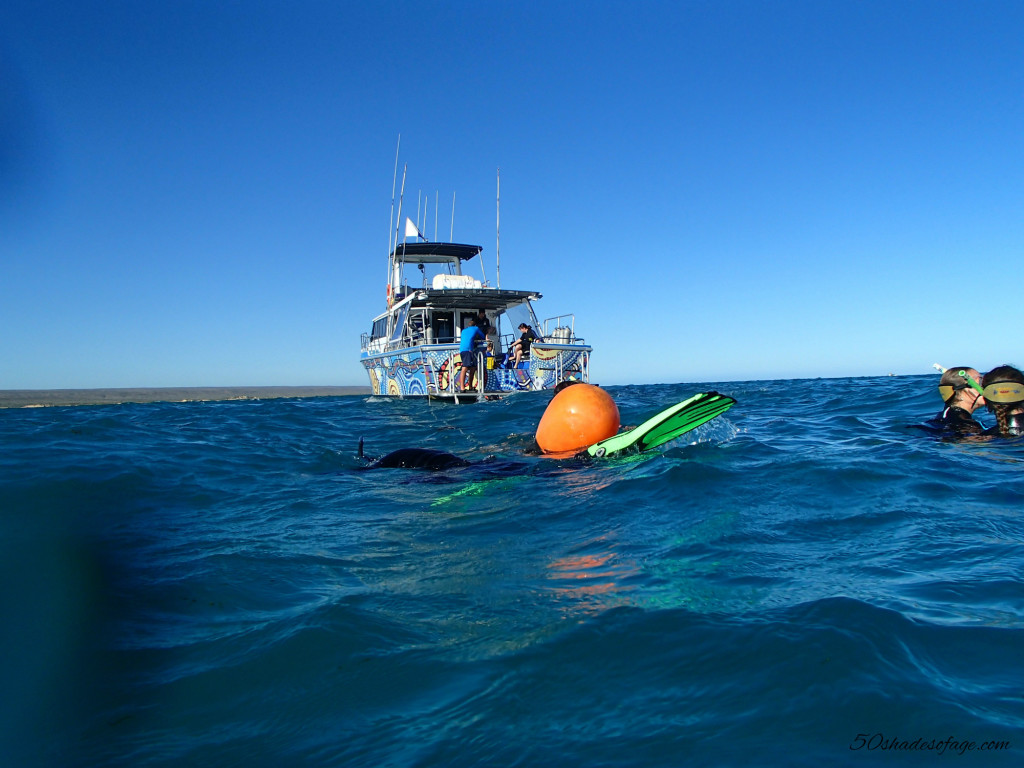 We were picked up by the boat cruise bus very early in the morning and driven to Tantabiddi Port to board our cruise boat. The itinerary for the day consisted of:

8:30am Depart Tantabiddi to head out into the Ningaloo Reef to look for whale sharks

9am First snorkel on the amazing corals of the Ningaloo Reef

9:30am Spotter plane takes off to look for whale sharks for us to swim

10:15am Vessel starts cruising the reef looking for whale sharks to swim with Until Lunch Swimming with whale sharks

12:30-1pm Head into the inner reef to have a delicious gourmet

3:15pm cruise back to Tantabiddi on the look out for dolphins, turtles, dugongs… 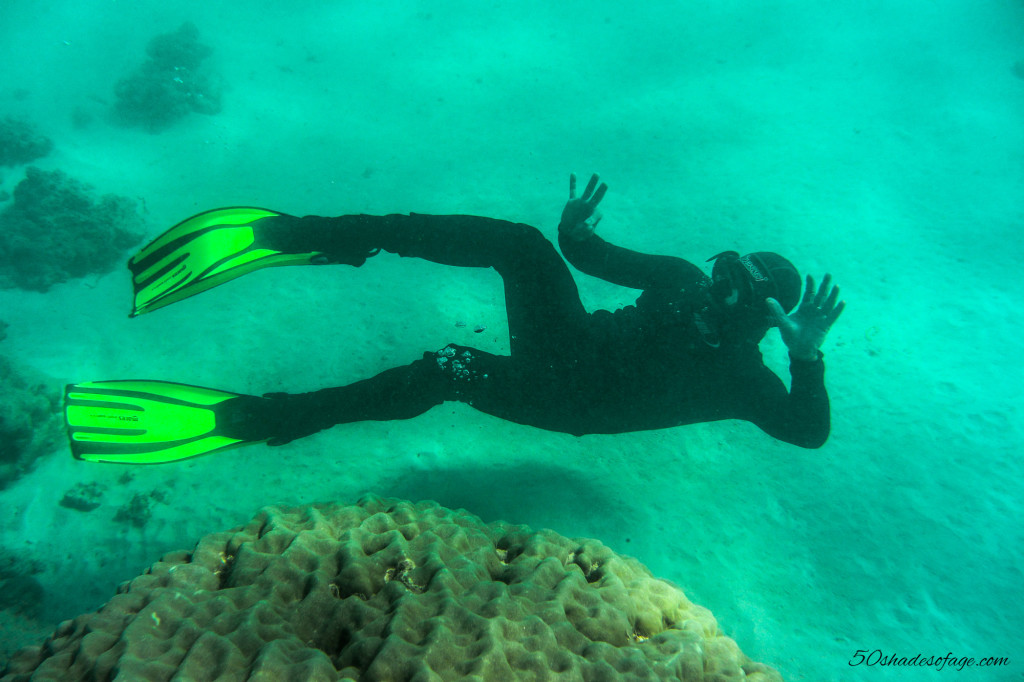 Snorkelling on the Ningaloo Reef

The Whale Sharks, the world’s largest fish, can reach up to 18 metres in length fully grown, but more commonly, they are between 4 and 12 metres long at the Ningaloo Reef.  A 12 metre Whale Shark may weigh as much as 11 tonnes and have a mouth more than a metre wide. Extraordinary! 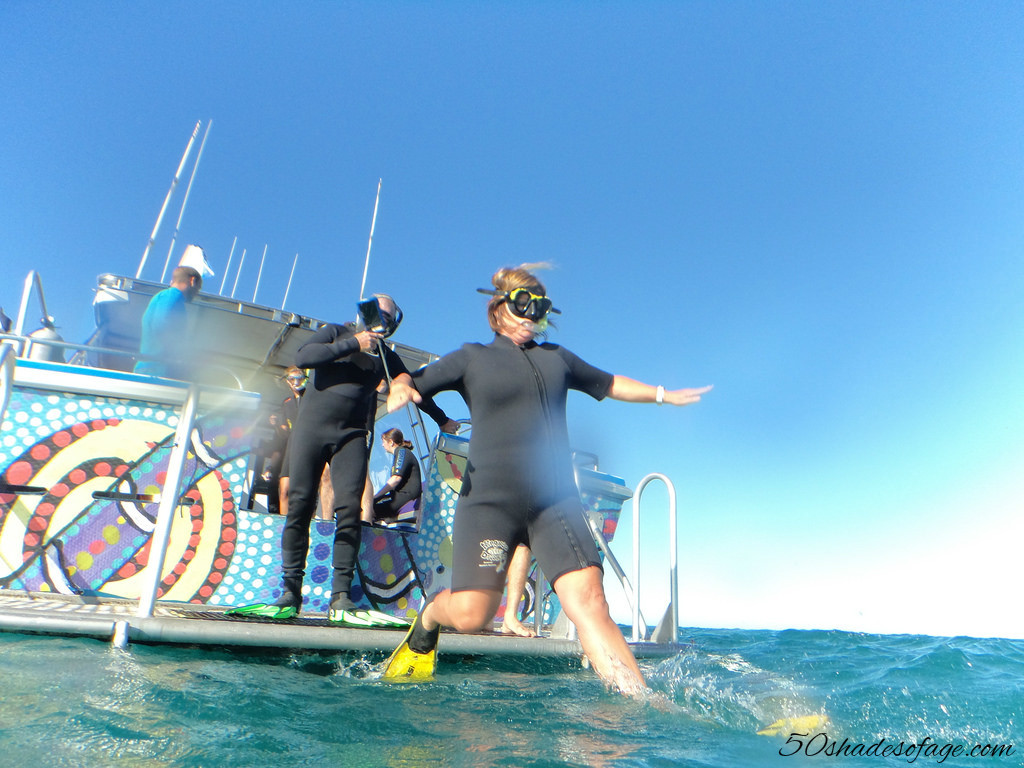 Plunging into the Ningaloo Reef

There are strict rules for swimming with these gentle giants, such as absolutely no contact is to be made with the creature, do not swim any closer than 3 metres from the head or body or 4 metres from the tail, no flash photography and only 10 people in the water at a time with one Whale Shark.

Initially when we plunged into the water to swim with our first Whale Shark, I was very apprehensive and a little afraid. Upon seeing the massive creature swim towards me I panicked and started to swim away as far as I could, worrying about retaining the 3 metre proximity. Once we divided into two groups on either side of the beast, we swam serenely beside it and starting noticing the majesty of its appearance and unique spotted pattern. 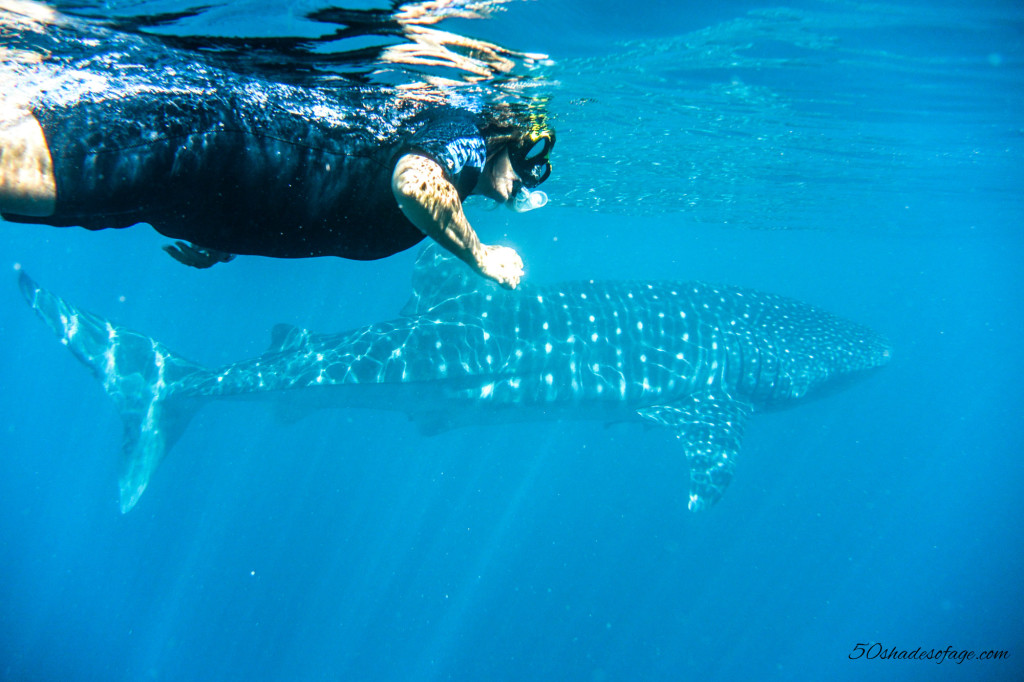 It was a unique experience to swim alongside these sublime creatures and view a myriad of other marine life such as Turtles, Dolphins, Minky Whales, Sharks, Manta Rays and Coral Reef Fish. 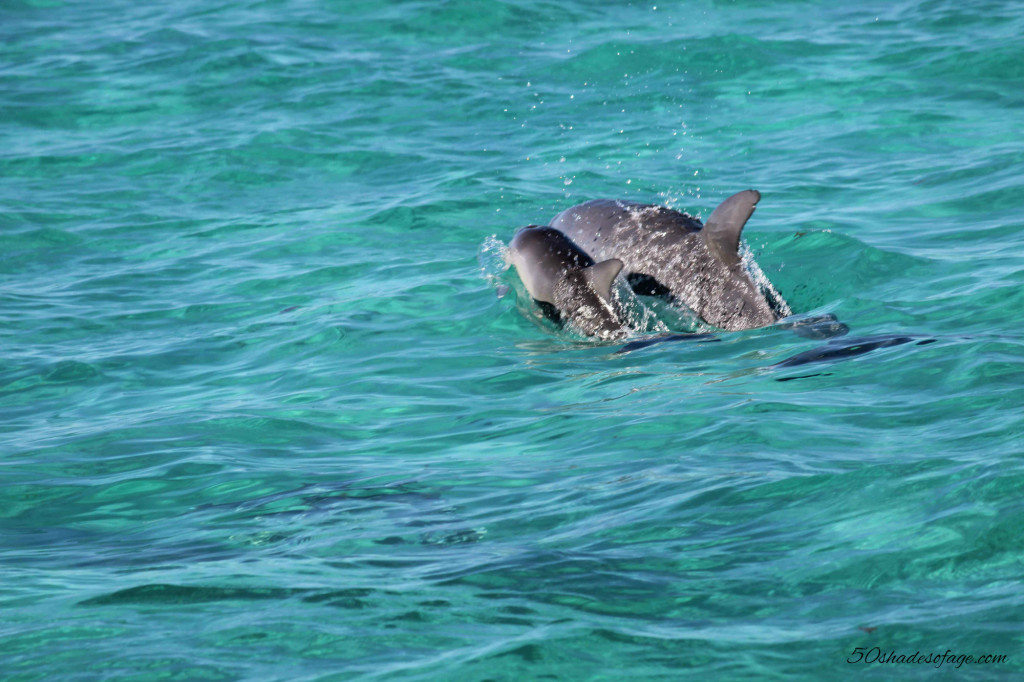 Dolphins Swim on the Ningaloo Reef

It wasn’t only a day full of fun and adventure, but from an educational point of view it provided great information of the marine life in the Ningaloo Marine Park and how scientists are integral to ongoing research and conservation of the area.

I felt privileged to be able to swim with these magnificent animals and found it to be an exhilarating and truly memorable experience.  Definitely one to tell the Grandkids about!

Spread the love
Ningaloo ReefNingaloo Reef Marine ParkWhale Shark SwimWhale Sharks
By 50 Shades, March 27, 2015 Kathy was a 50 something year old when she started up this blog 6 years ago, but has since turned over another decade and is now in her early 60s. She is married with two adult children and lives on the Tweed Coast of New South Wales, Australia. Kathy enjoys living life to the fullest and loves to keep fit and active by maintaining a healthy diet and exercising regularly. Some of her interests include reading, photography, travelling, cooking and blogging! Kathy works part-time as a freelance writer but her real passion is travelling and photographing brilliant destinations both within Australia and overseas and writing about it.