Shark Bay: A World Away 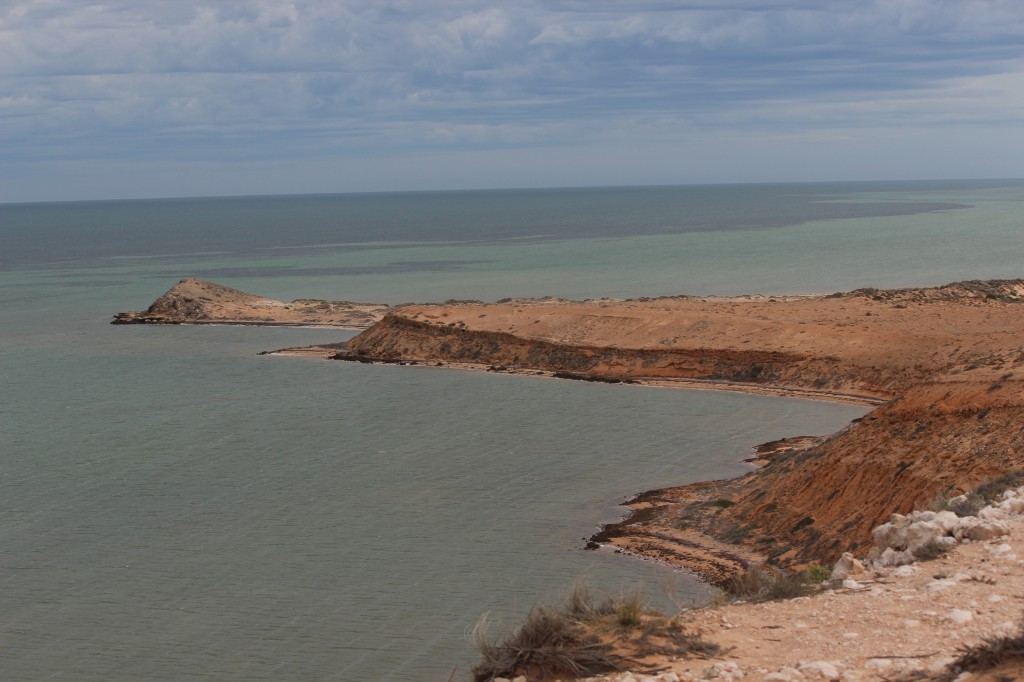 The azure waters of Shark Bay, geographically located on the most western point of Western Australia, comprises a world of pristine bays, lagoons, islands and the largest natural harbour between Perth and Broome.  It is protected by two spectacular peninsulas including Dirk Hartog Island to the west and Francois Peron Peninsula to the east, and covers a vast area of 25,000 square kilometres. 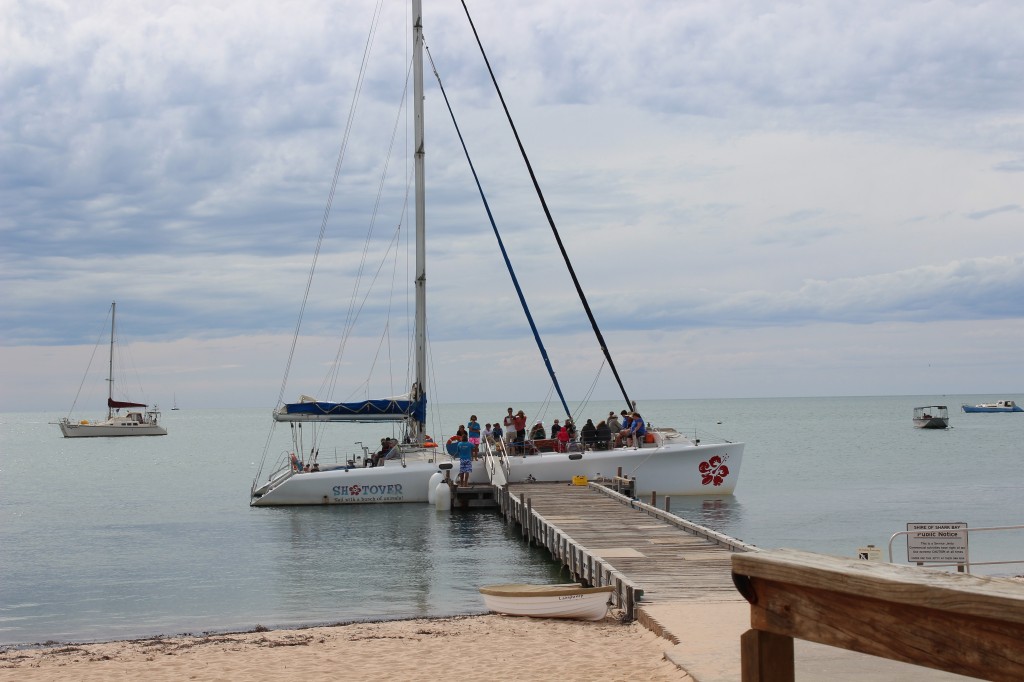 Shark Bay is famous for its ‘World Heritage’ listing and unique ecological systems of Stromatolites, sea grasses, marine life and rare endangered species including the Dugong. It is also renowned for its friendly visiting Dolphins at Monkey Mia.

So what is the best way to see this unique part of the world you may ask? Take the World Heritage Drive by road and explore the extraordinary natural riches of Shark Bay.

Driving from the south you will know you are in Shark Bay territory once you reach The Overlander Roadhouse. Turn off the highway and drive for approximately 30 kilometres to Hamelin Station, that is a working pastoral station with both sheep and goats. You can spend a night or two here in a cabin or on one of the campsites to experience a day in the life of a real ridgy didge working station. 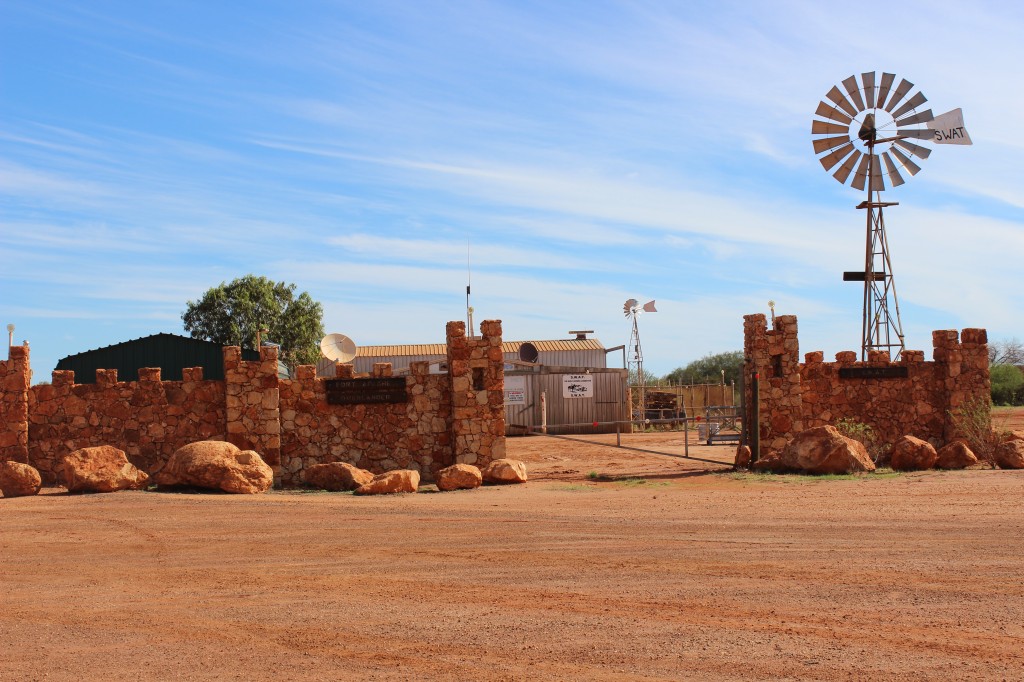 Nearby is the old Hamelin Pool Telegraph Station and caravan park that once again provides accommodation for campers or caravans and has a café. Although the facilities here are a little dated, there is a certain charm about this place. Built in 1884 the telegraph station connected Perth to Roebourne but closed in the late 1950’s when it was no longer required. 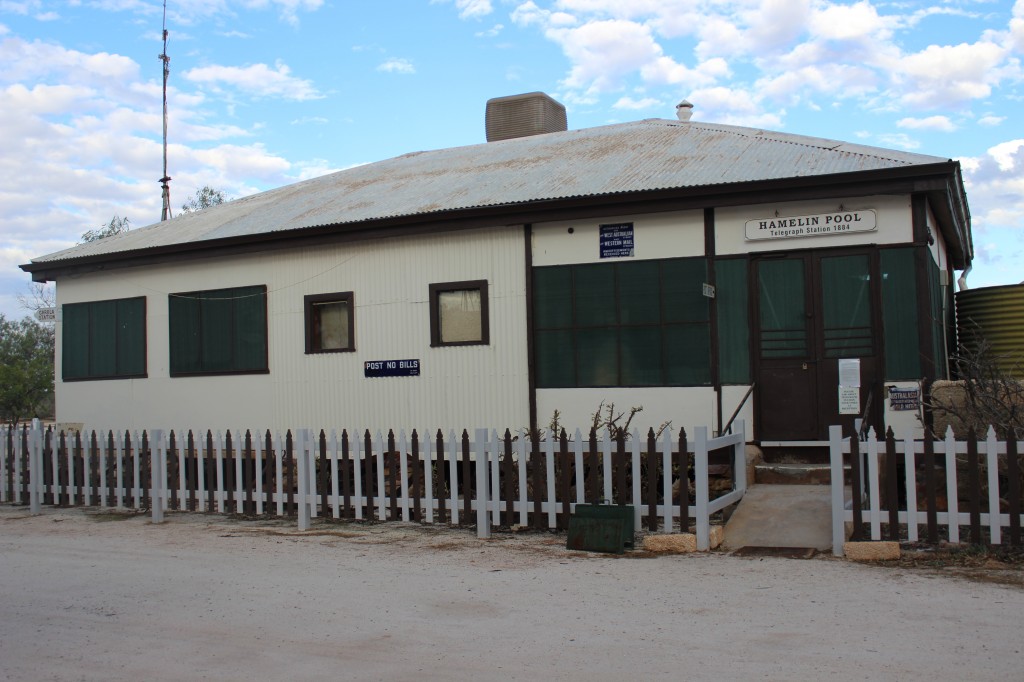 Also in the area are the remnants of a shell block quarry that early settlers cut blocks from the large amount of cockle shells settled on the shoreline. They used these blocks to construct buildings that still exist at Hamelin Station, Nanga Bay and Denham. 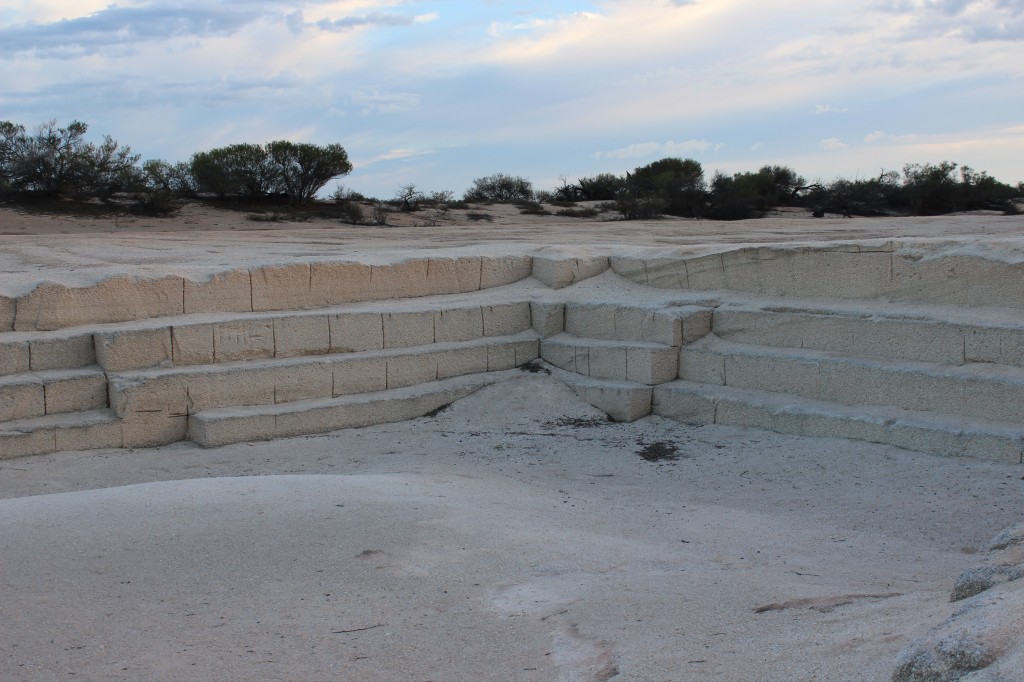 However, the main reason that Hamelin Pool is visited by tourists, and more importantly scientists from all over the world, is to see a living sample of the earliest record of life on earth – the Stromatolites. A viewing platform provides excellent access to the site of Hamelin Pool’s Stromatolites where you can learn more about these living microbes that date back as far as 3,500 million years ago. 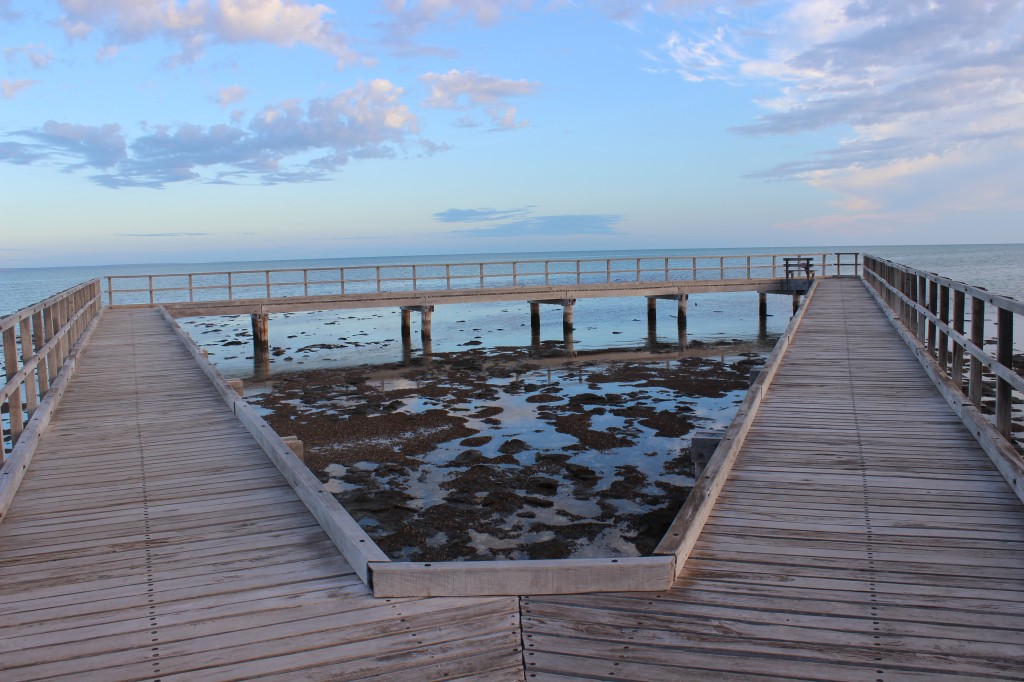 50 kilometres from Hamelin Pool on the western side of Peron Peninsula, is a peaceful location with access to the waters of the Shark Bay Marine Park – Nanga Bay. It was previously a pastoral station that was converted into a tourist resort and caravan park and has a café, restaurant and general store. It is a great location for swimming, wind surfing and a fabulous fishing spot. 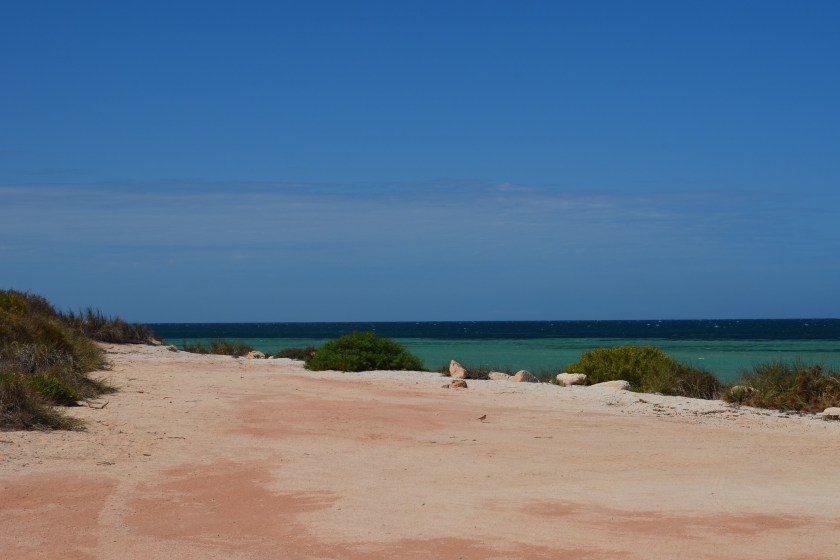 Not far from Nanga Bay is the very popular Shell Beach, whose shoreline is made up of trillions of tiny cockle shells that have accumulated up to 10 metres deep and 1 kilometre wide. The same hypersaline waters that allow the Stromatolites to grow also provide the right environment for other unique creatures, such as the cockle shell. 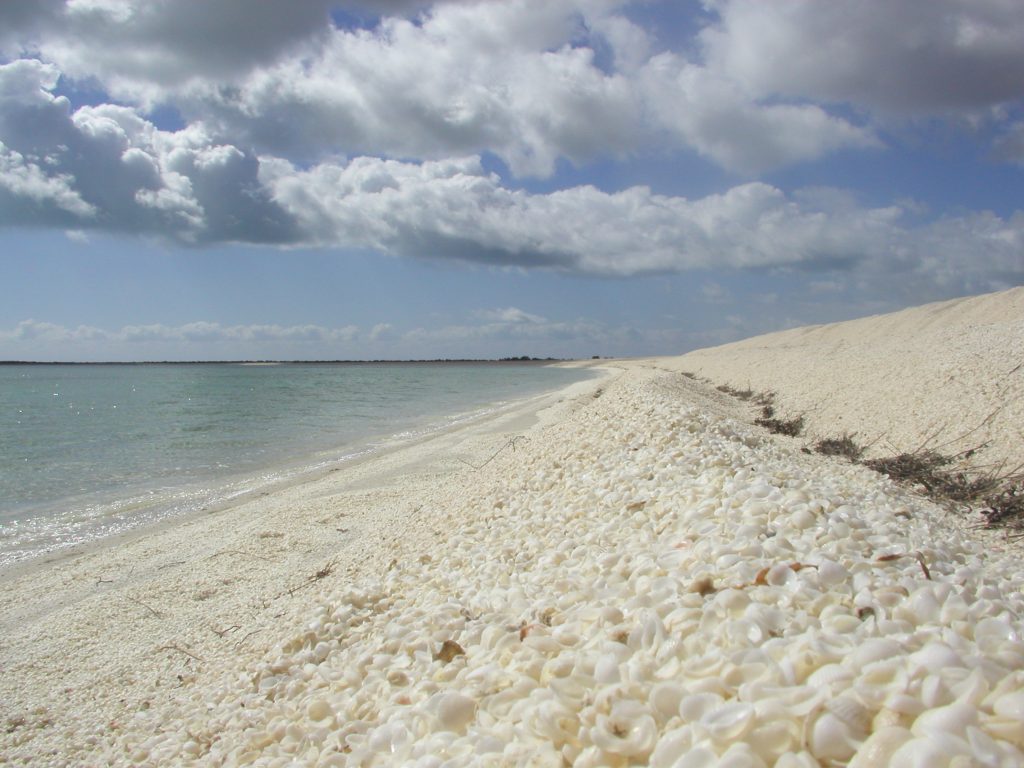 The beautiful shell beach gives way to crystal clear water of the most intense greens and blues and is an ideal swimming and picnic spot.

25 kilometres from the town of Denham is a scenic area called Eagle Bluff that has a boardwalk on the edge of the cliff affording an aerial view of the shallow waters of Shark Bay Marine Park. From here you often see marine life in the clear waters such as Manta Rays, Cowtail Stingrays, Eagle Rays, Turtles, Sharks and the occasional Dugong. 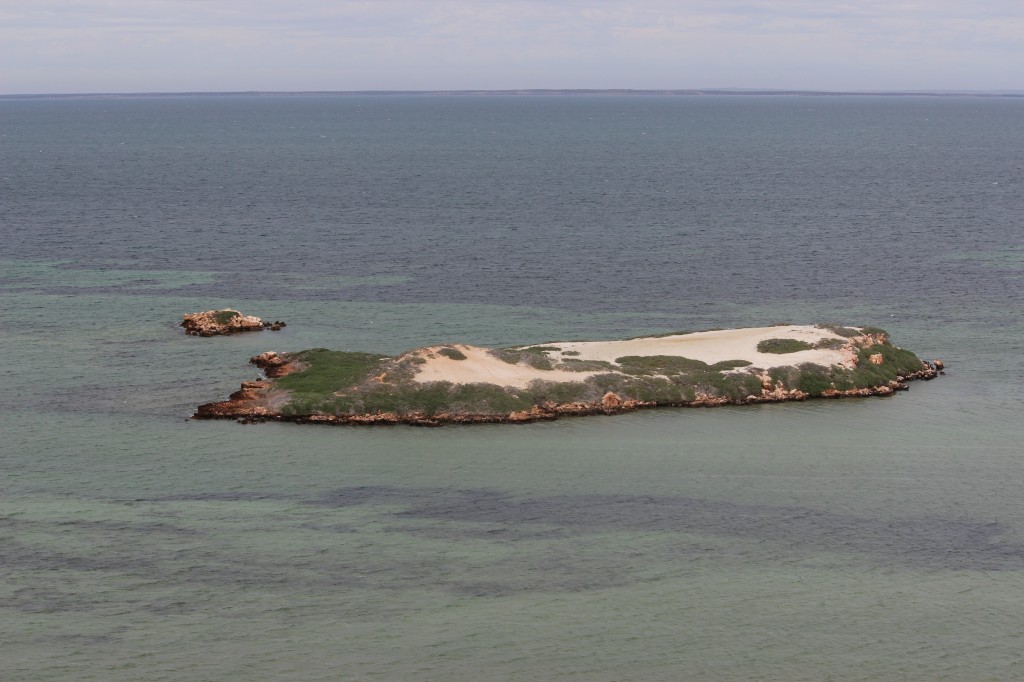 You can find out more about the marine creatures of the Shark Bay Marine Park at the Ocean Park Aquarium, just 10 kilometres from Denham. The knowledgable tour guides will take you through the aquarium, where you can get up close and feed all kinds of marine life, including the large Lemon Sharks. 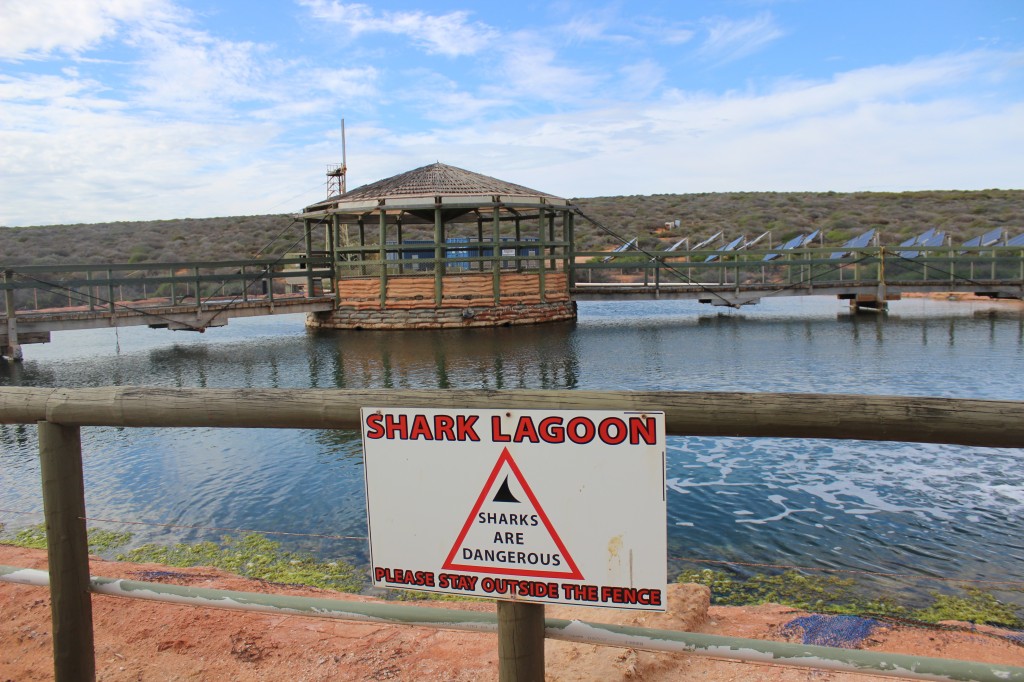 Australia’s westernmost town, Denham, grew out of a pearling settlement with a street paved in pearl shell called Freshwater Camp. The town situated on the Peron Peninsula looks across the waters of Shark Bay to Dirk Hartog Island and is very much a fisherman’s paradise. 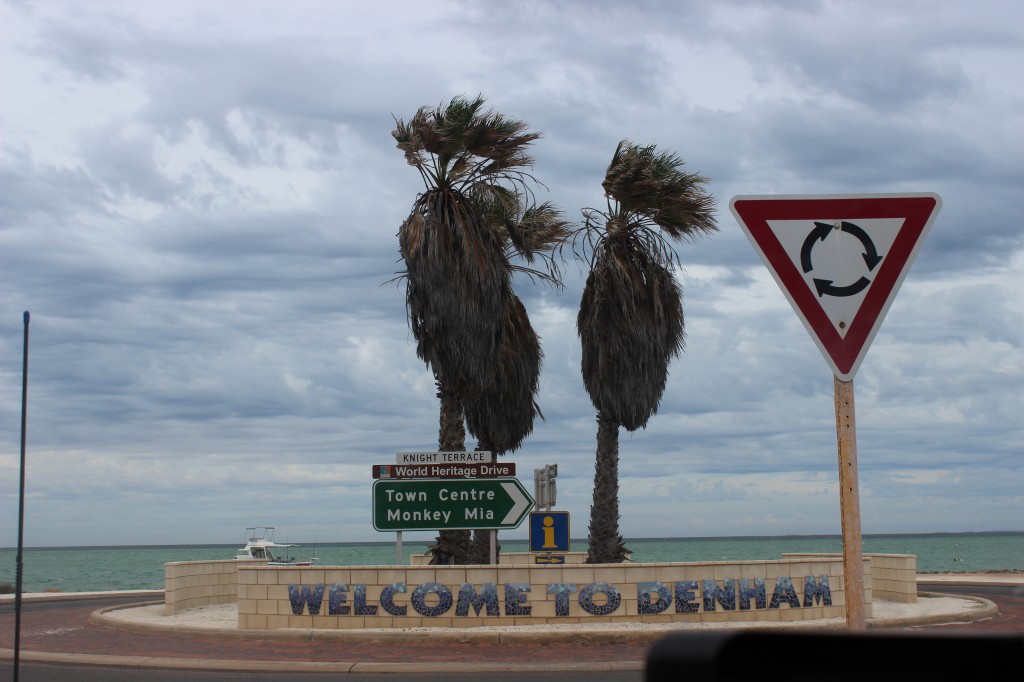 It is a great place to base yourself during your stay in Shark Bay with plenty of accommodation choices. The Shark Bay Discovery Centre can book you on many tours such as fishing charters, 4WD tours, quad bike tours, coach tours, kayaking tours, snorkelling, bush tucker walks, aboriginal experiences, scenic flights and pleasure cruises. 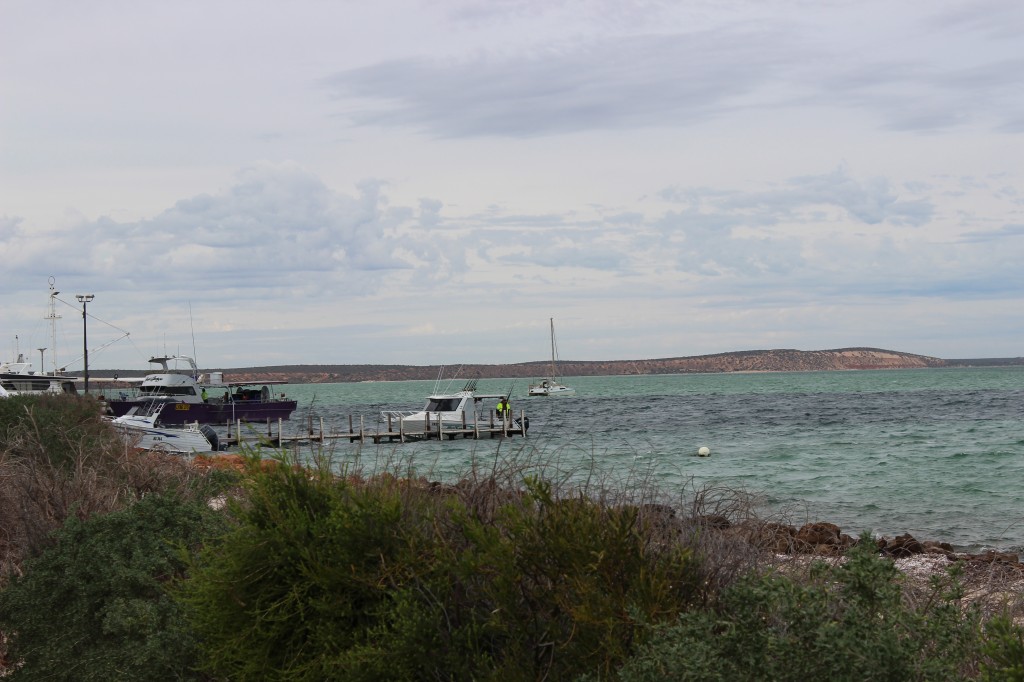 Little Lagoon, 3 kilometres outside Denham, is an idyllic spot for fishing, swimming, canoeing and kite-boarding.  Linked to the sea by a small tidal channel, this pristine tranquil waterway is a natural nursery for many fish species. There are shade shelters, toilets and BBQs around the lagoon shore. 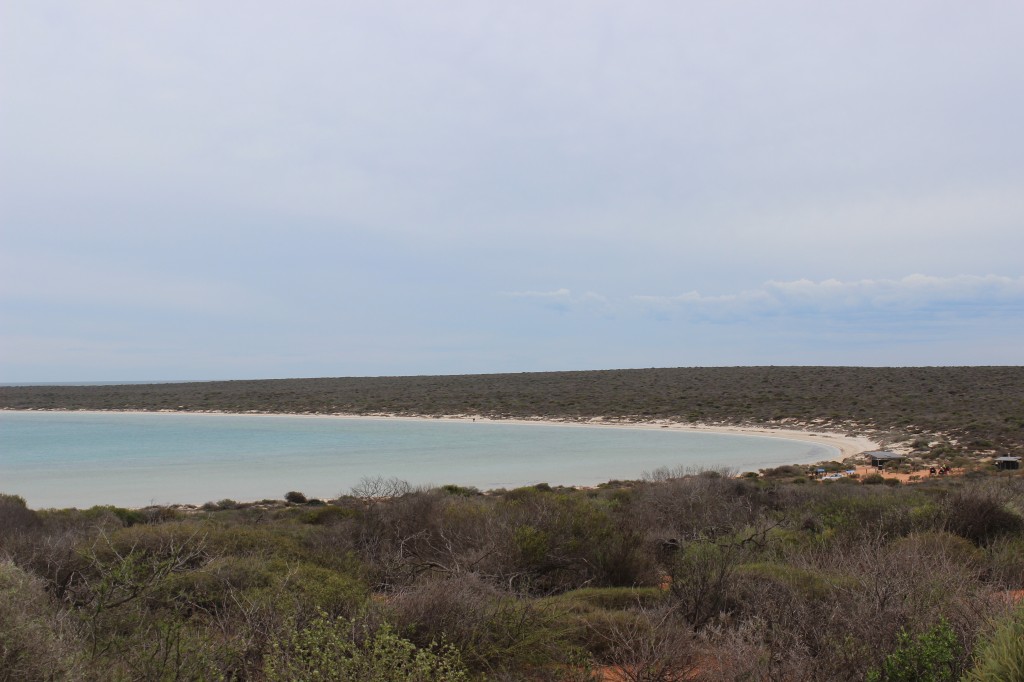 Probably everyone has heard of the Monkey Mia Dolphins, who seldom miss coming in for their morning snack of fish up to three times before 12 noon in the shallows of the Monkey Mia bay. Monkey Mia is a special reserve attracting a small entrance fee, and comprises of a marine exhibit and theatrette, playing documentary and educational videos on the marine life in the area. 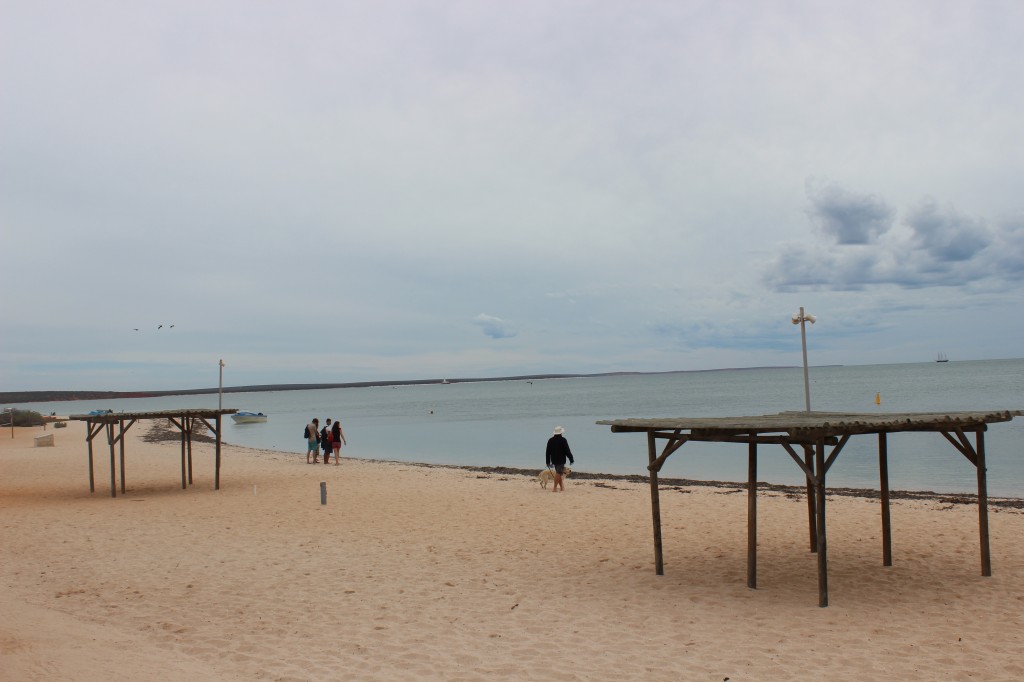 The Wildlife Rangers monitor the health of the Indo-Pacific Bottlenose Dolphins of the area and supervises their feeding program to ensure they retain their hunting and survival skills. Interaction with humans is kept to a minimum, although the Dolphins appear to want to play! We saw up to 20 Dolphins cruise into the shallow waters during our visit. 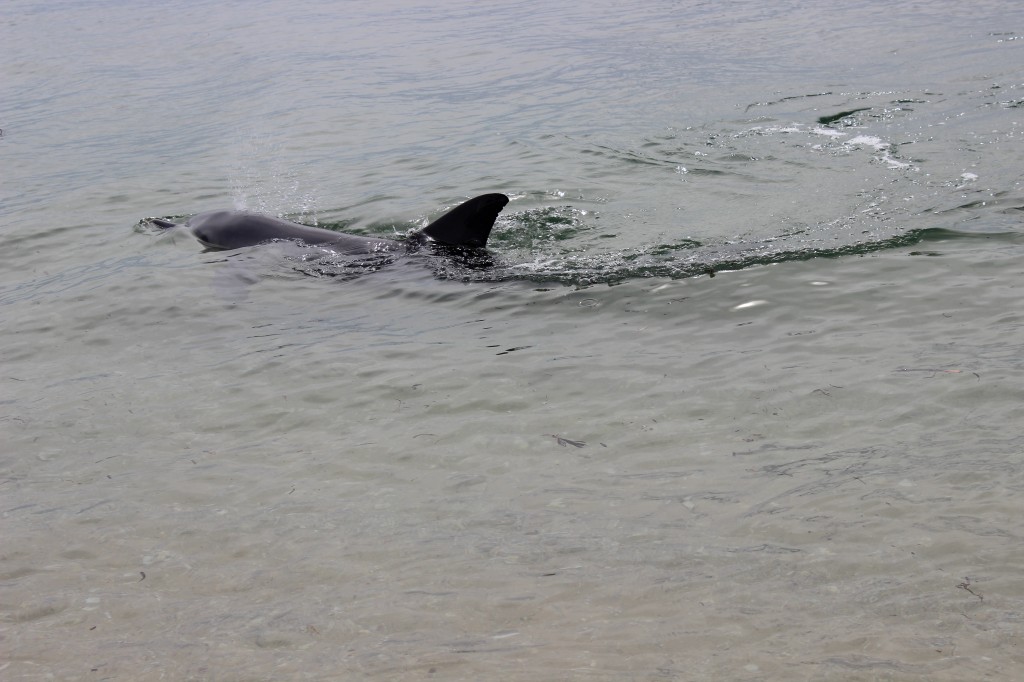 There is a resort and caravan park situated on the shores of Monkey Mia, and apart from the normal water activities and Dolphin watching, you can take a beach camel ride, go on a wildlife cruise, an indigenous tour, a walk trail, a bush tucker walk or a working pearl farm visit. 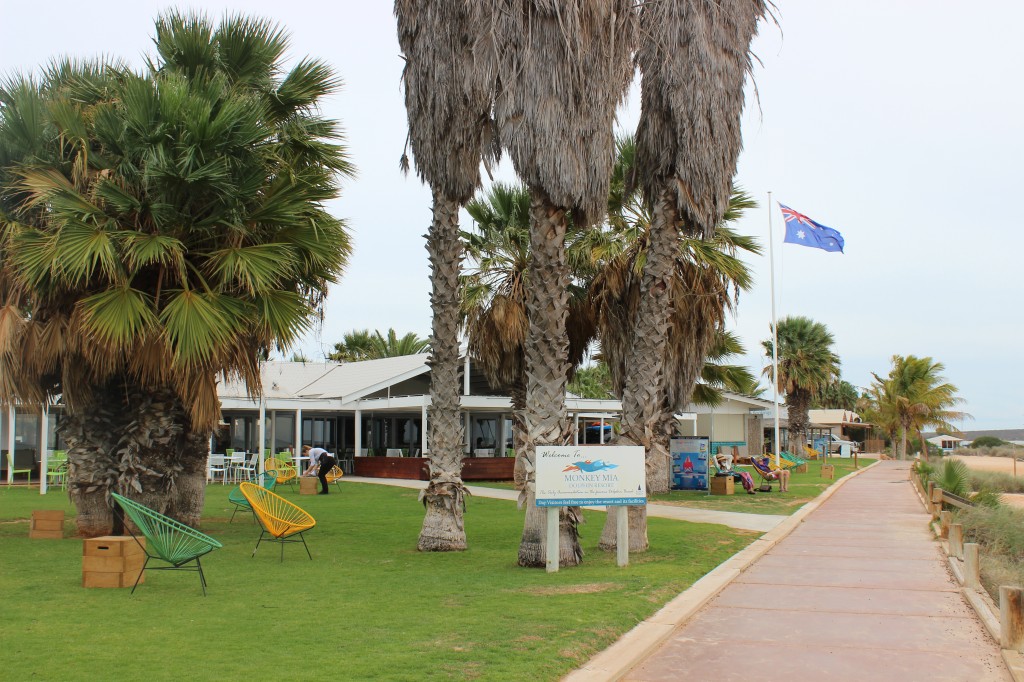 Just outside the entrance to the National Park is the Peron Homestead that provides a self-guided walking trail to explore the history of a working sheep station. You can also enjoy the green lawns, BBQ or just relax in the station’s Artesian hot tub. 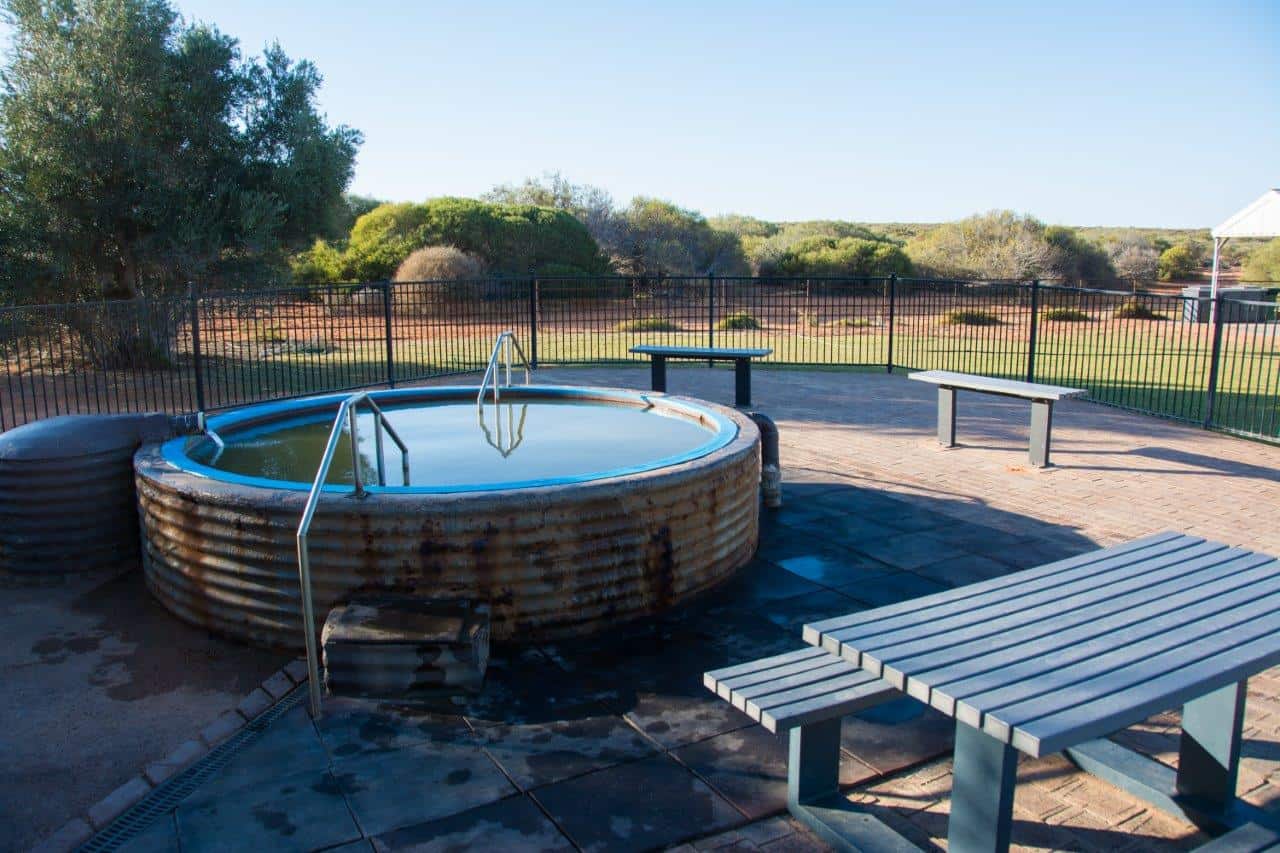 The Hot Tub at Peron Homestead

The Francois Peron National Park can be accessed by 4WD vehicles only and covers an area of 52,500 hectares of the northern most tip of the peninsula. It is well worth the trip to see some of the phenomenal sights such as unusual wildlife and dramatic landscapes. There are four campsites available in the park for overnight camping. 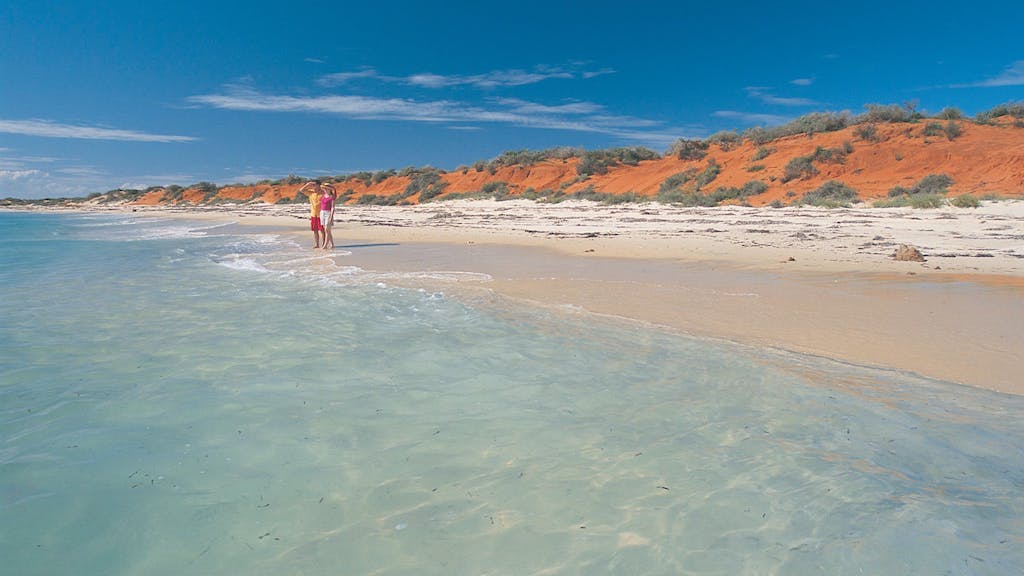 Some of the places to visit are Big Lagoon, Cattle Well, South Gregories, Gregories, Bottle Bay and the viewing platforms at Skipjack Point. The contrasts of the red earth, the green coastal flora, the turquoise blue ocean and the clear blue skies of the Francois Peron National Park are a wonderful spectacle.

For those who have longer to linger, you can take a barge across to Dirk Hartog Island, the largest island in Western Australia. Only a limited amount of vehicles are allowed at any one time on the island, so advance bookings are advised.

There is an Eco Lodge that provides accommodation and tours such as history tours, snorkelling tours, wildlife cruises and fishing charters. There are also plenty of walking trails and unspoilt swimming beaches on the island. 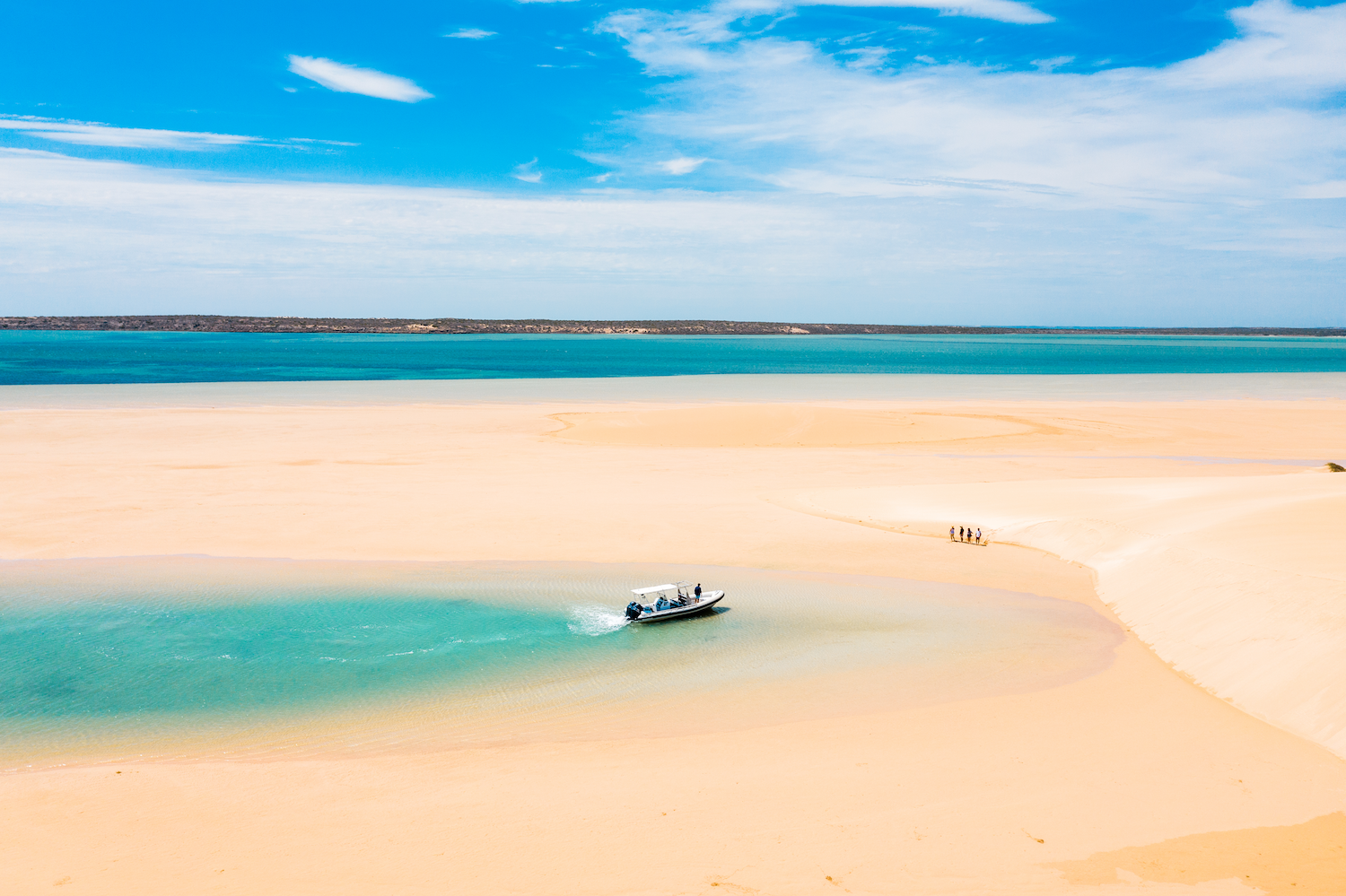 A boat at Dirk Hartog Island

Turtle Bay on Dirk Hartog Island is the favoured nesting site for the endangered Loggerhead Turtles in Western Australia. However, because it is a protected area, you will have to tread very carefully on this beach. 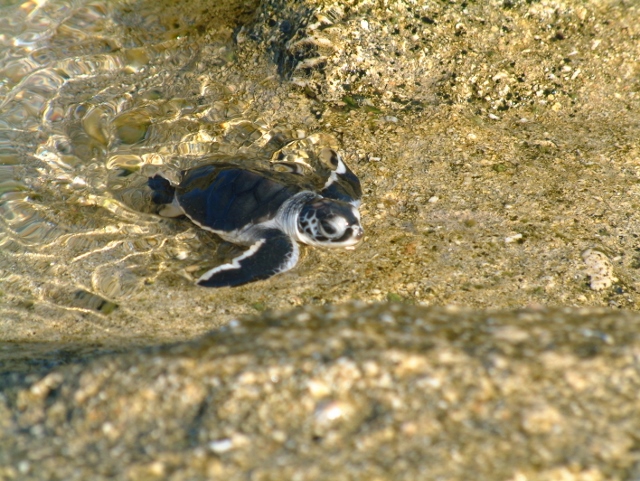 I can’t think of anywhere in the world that satisfies all of the four natural criteria to be listed as a world heritage area: Natural Beauty, Earth’s Evolutionary History – the Stromatolites, Ecological Processes – the largest seagrass banks in the world and Biological Diversity with important habitats. No wonder Shark Bay ranks as one of our planets most impressive wilderness regions.

Spread the love
DenhamFrancois Peron PeninsulaMonkey MiaShark Bay
By 50 Shades, June 17, 2014 Kathy was a 50 something year old when she started up this blog 6 years ago, but has since turned over another decade and is now in her early 60s. She is married with two adult children and lives on the Tweed Coast of New South Wales, Australia. Kathy enjoys living life to the fullest and loves to keep fit and active by maintaining a healthy diet and exercising regularly. Some of her interests include reading, photography, travelling, cooking and blogging! Kathy works part-time as a freelance writer but her real passion is travelling and photographing brilliant destinations both within Australia and overseas and writing about it.