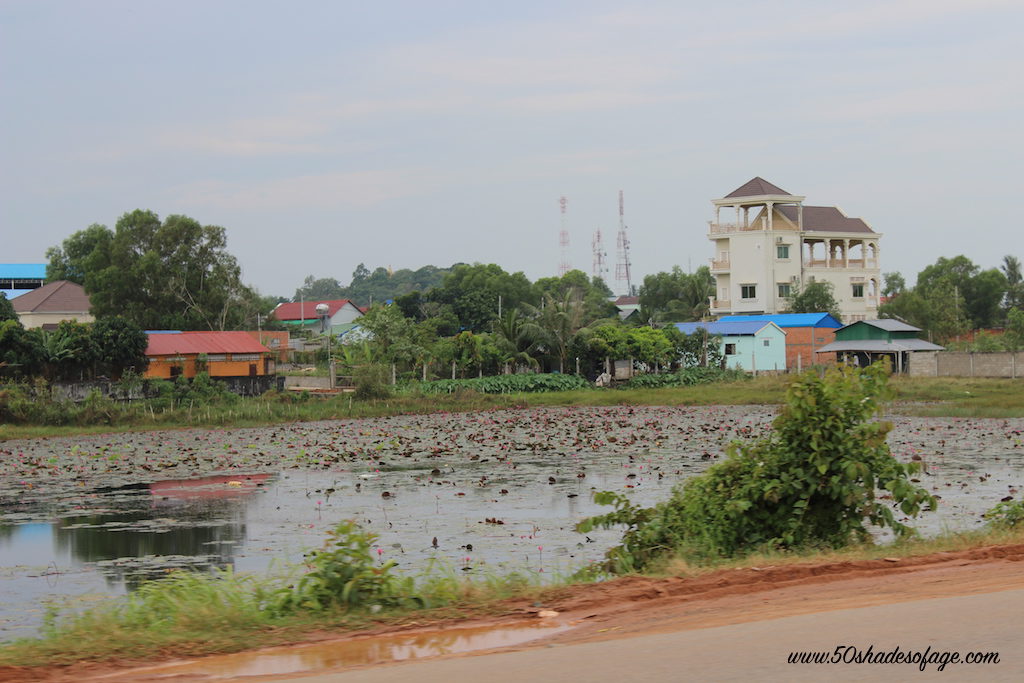 After a 20 minute tender transfer from the cruise ship we were swamped by small boys selling postcards and other cheap souvenirs, Tuk Tuk drivers and tour operators trying to get us on a tour at a “very cheap price for you”! We had arrived at the port of Sihanoukville on the south west coast of Cambodia. 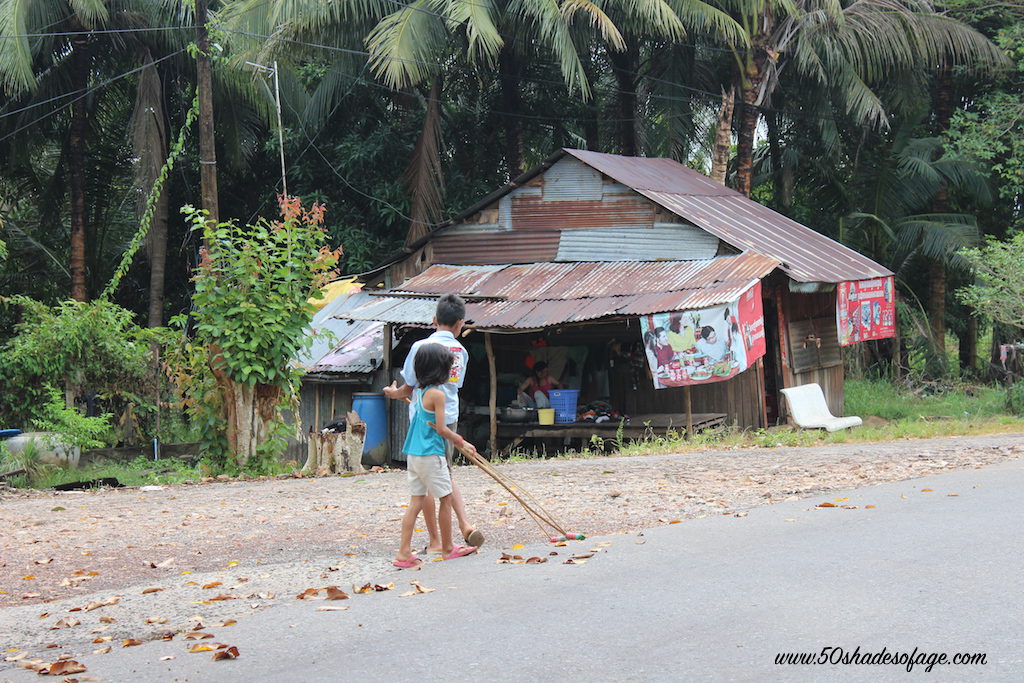 This was stop number seven on our South East Asia cruise and one that I was looking forward to the most out of all of the stops. However I was soon to be surprised, and maybe a little disappointed in what confronted me, with extreme poverty, dirty rubbish ridden streets, abandoned hotel resorts and mothers and small children begging for money. 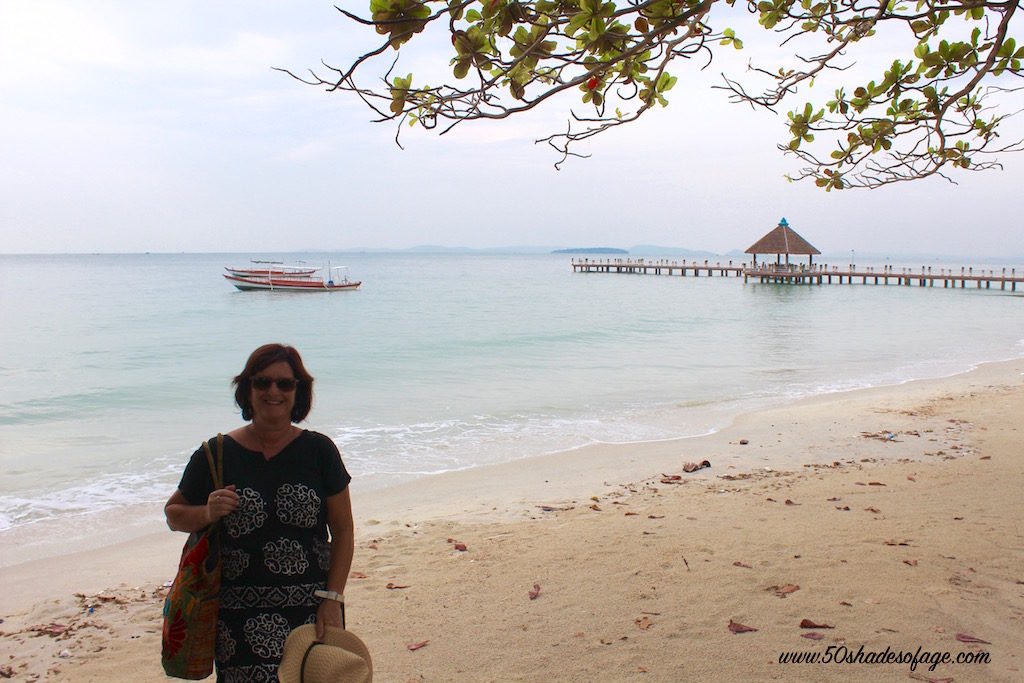 Sihanoukville, the capital of the Sihanoukville Province was not the prettiest of the Asian cities I have visited, however it does have some lovely palm-fringed beaches, tropical islands and the mangrove jungles of Ream National Park. Despite being the country’s premier seaside destination, after decades of war and upheaval the town and its infrastructure remain very much disjointed and architecturally unimpressive. 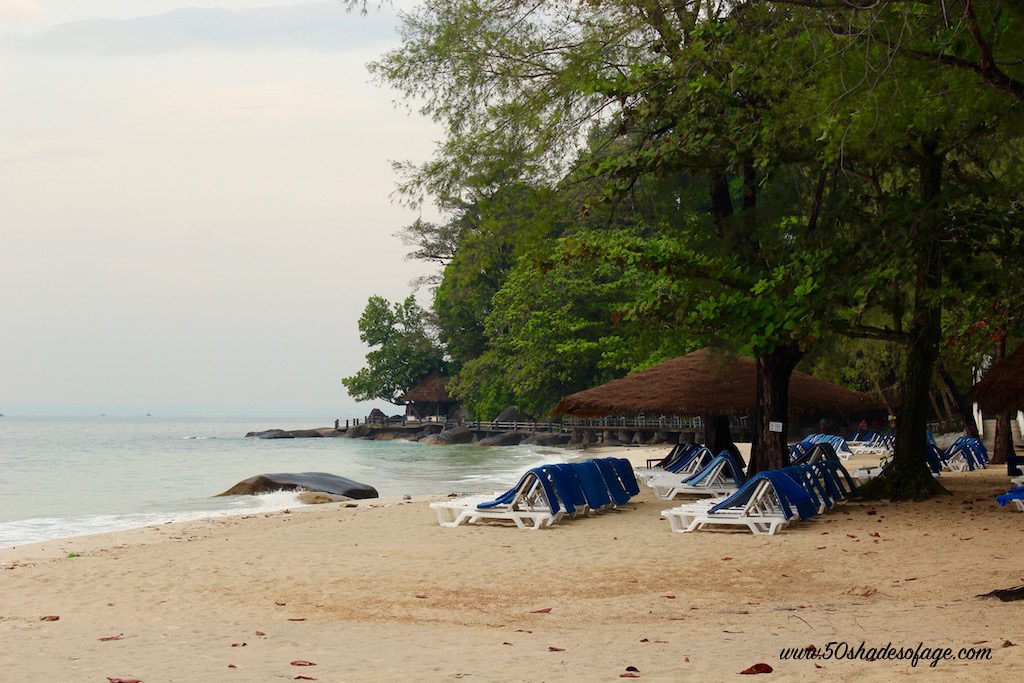 I would say it is work in progress and with further tourist development being the driver, with the port as a hub for the expansion of maritime transport, hopefully will attract additional industry and inject wealth into the economy. 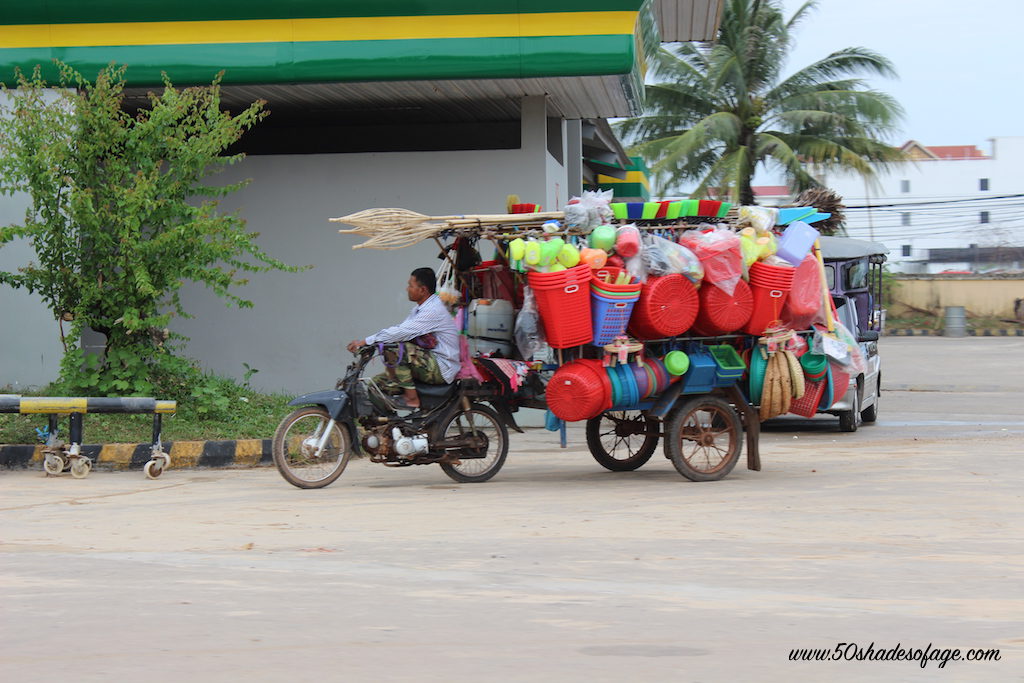 Initially we set off on foot and followed the beachfront along checking out a number of the beaches called Ochheuteal, Serendipity, Otres, Sokha, Independence and Victory Beach. Many of the beaches are exclusive to hotel resorts or are filled with sun lounges, grass hut restaurants and bars. 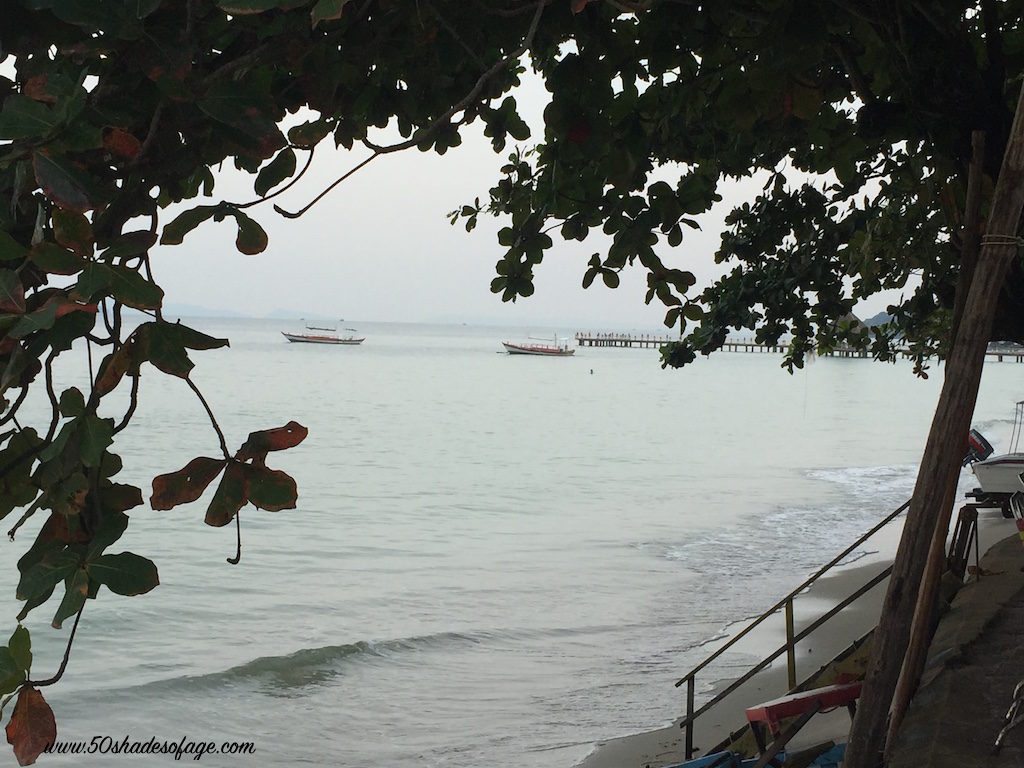 We also observed one of the islands, Snake Island which is only 800 metres offshore from Victory Beach and is linked to the mainland via a regular road bridge. The island is under development by Russian investors and will be converted into a luxury holiday destination and high standard residential area. 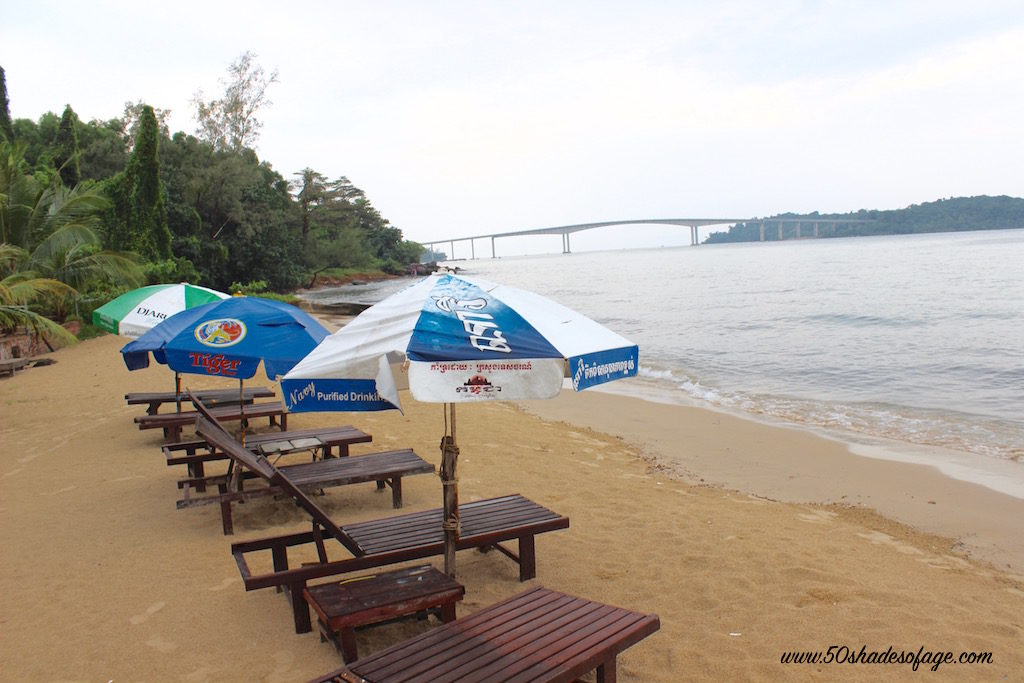 There are many local tour companies that offer day tours to the islands, close to the mainland, and some further away like Koh Rong and Koh Rong Samloem. Most of the islands have good accommodation and are renowned for their pristine beaches for swimming and are also popular diving locations. 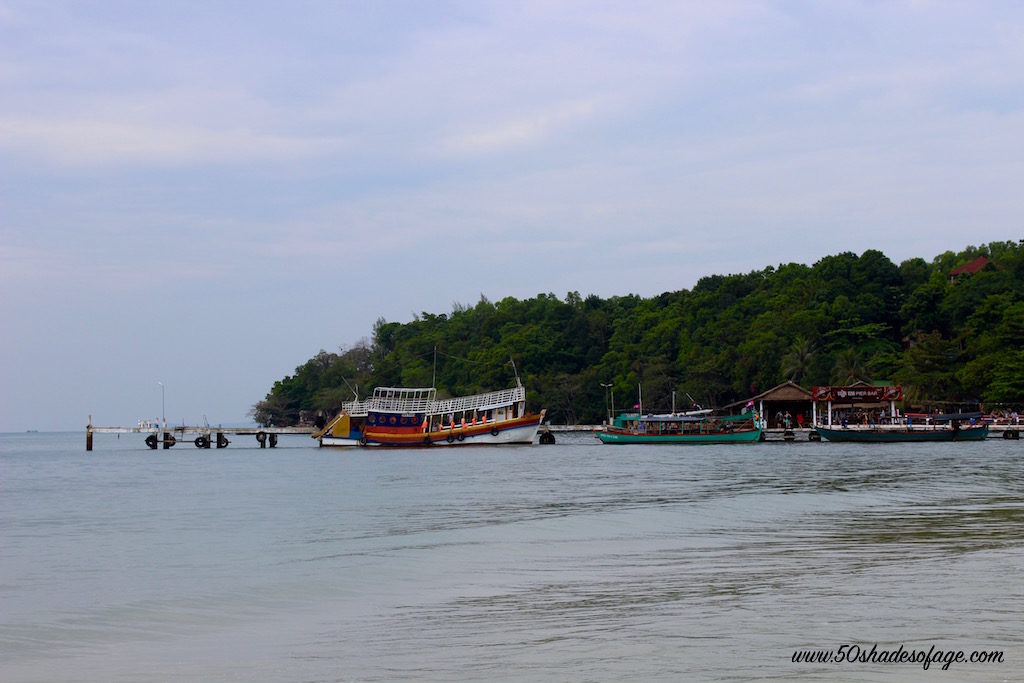 After walking around the beachfront for an hour or so we flagged down a Tuk Tuk, which consists of a motorbike attached to a cart, we asked to be taken into the city centre to take a look around. 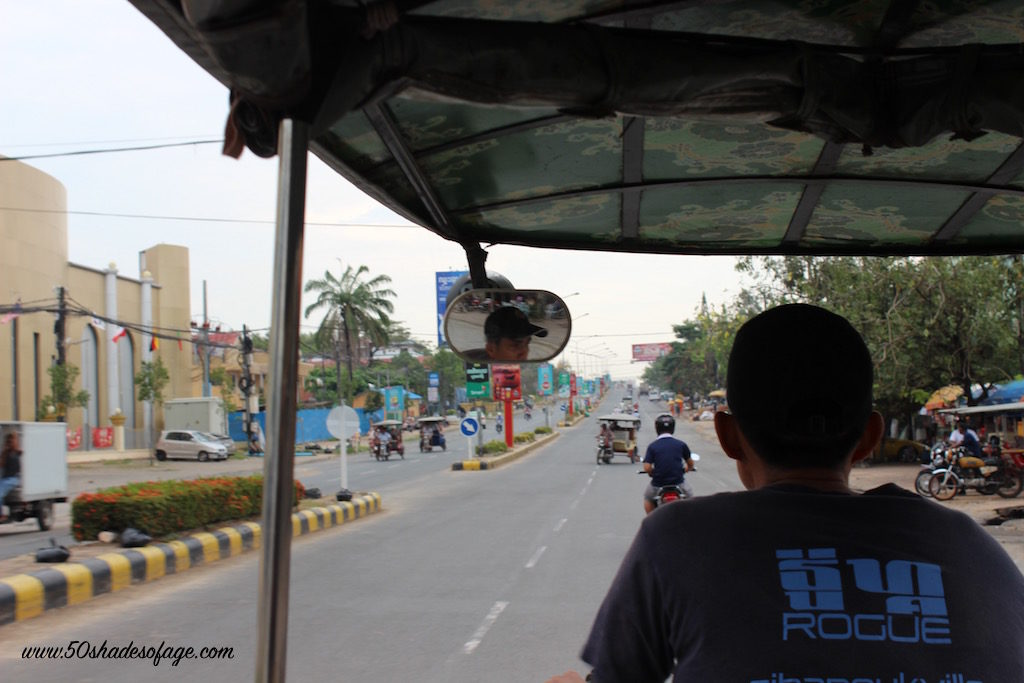 Tour of City Centre in a Tuk Tuk

We stopped at the iconic landmark at Lion’s Gate Roundabout, with its gold gilded lion statues sitting serenely in the centre of the roundabout, and then passed the central markets teaming with fresh produce, locals touting their wares and shoppers. 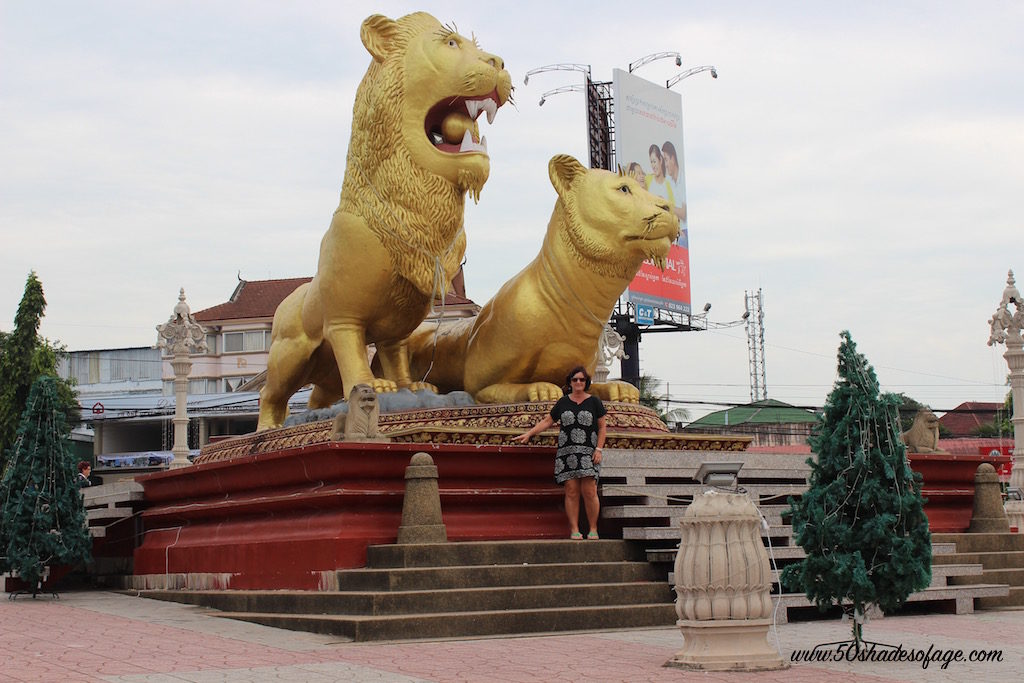 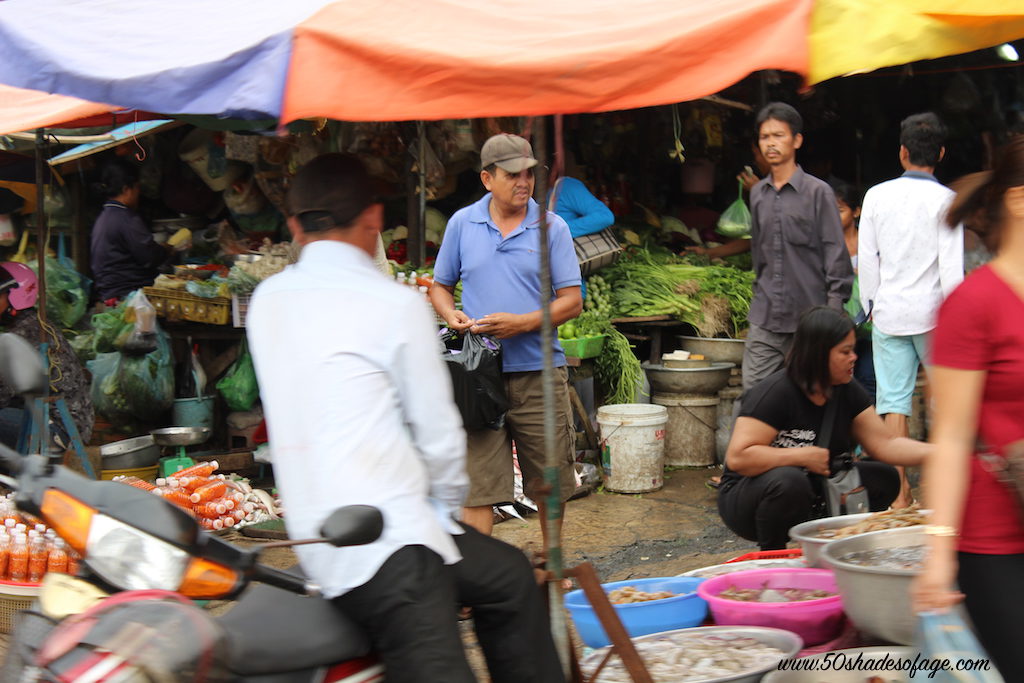 The Tuk Tuk struggled throughout the uphill climb to Wat Leu Buddhist Temple, located on a hill, overlooking Sihanoukville bay. 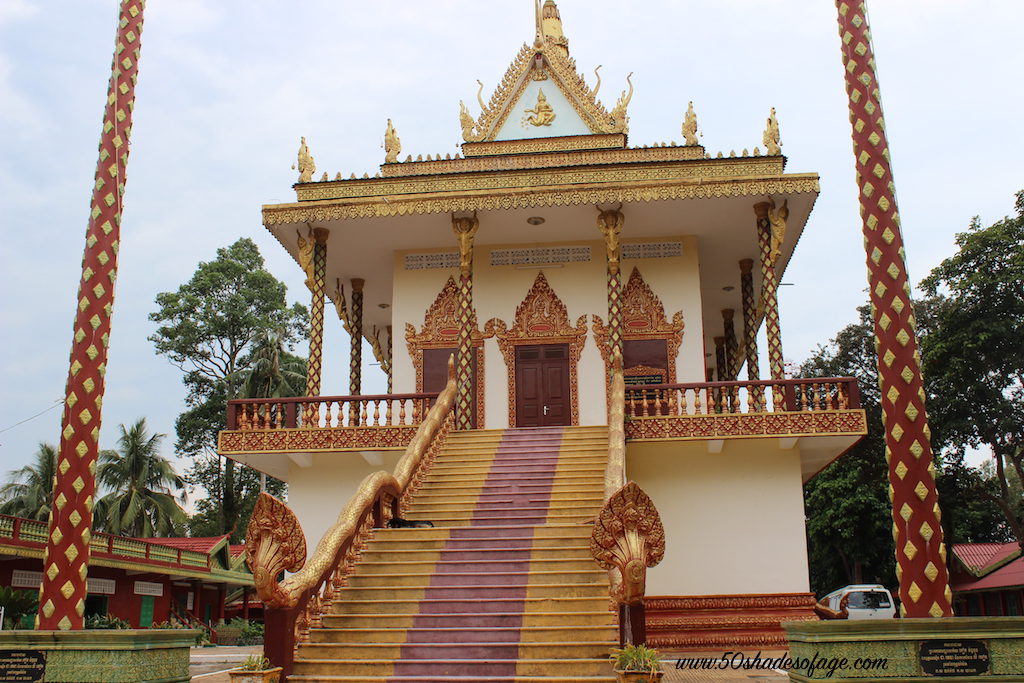 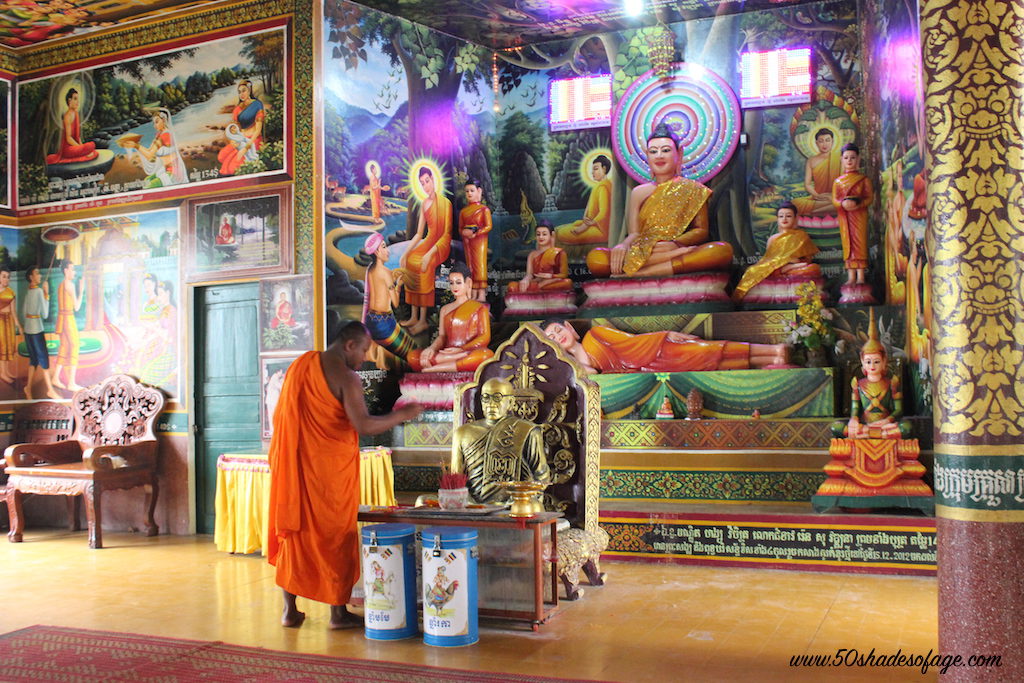 However the climb was worth it with a beautiful large pagoda, smaller temples, Buddha statues, wild monkeys and an abundance of cute local children present. 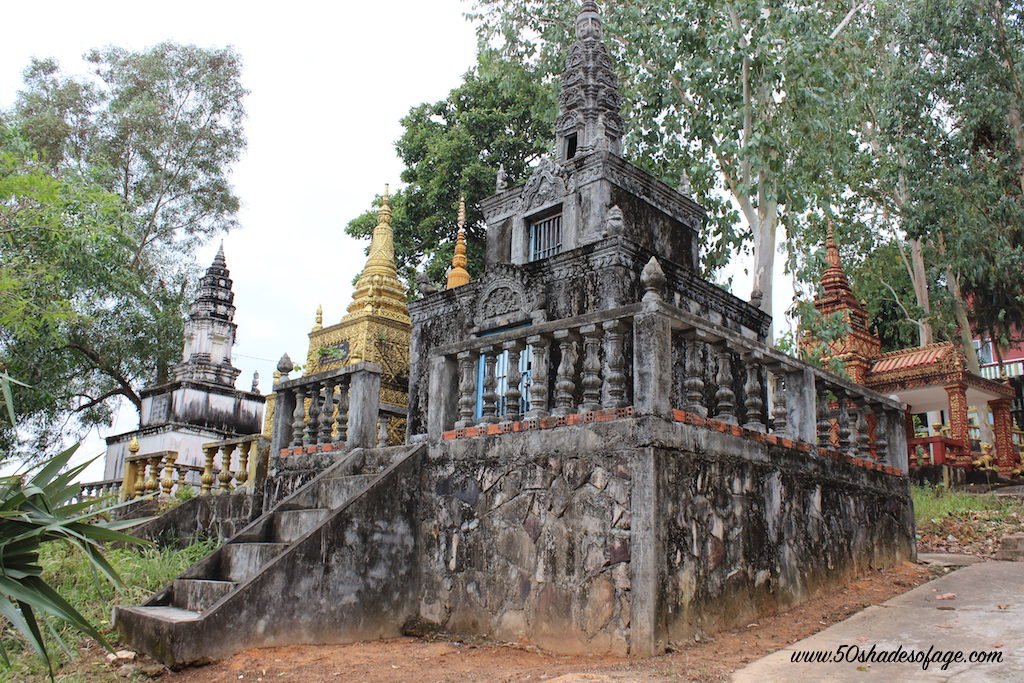 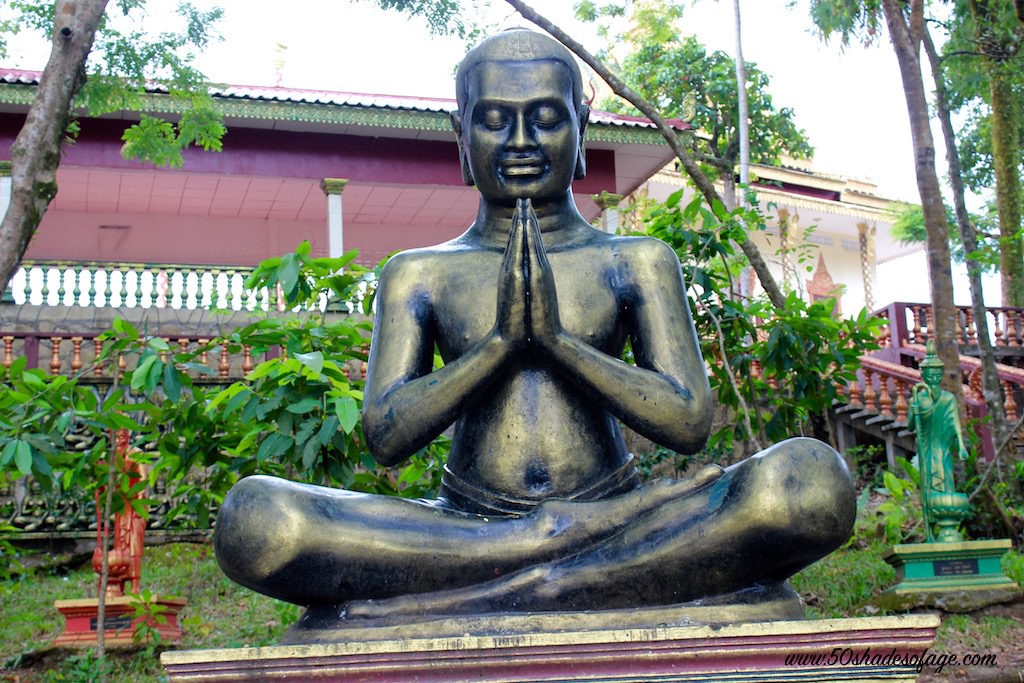 We asked our very accommodating Tuk Tuk driver to take us to “the nicest beach in Sihanoukville” which he happily obliged by dropping us off at the beautiful, but very touristy Sokha Beach. 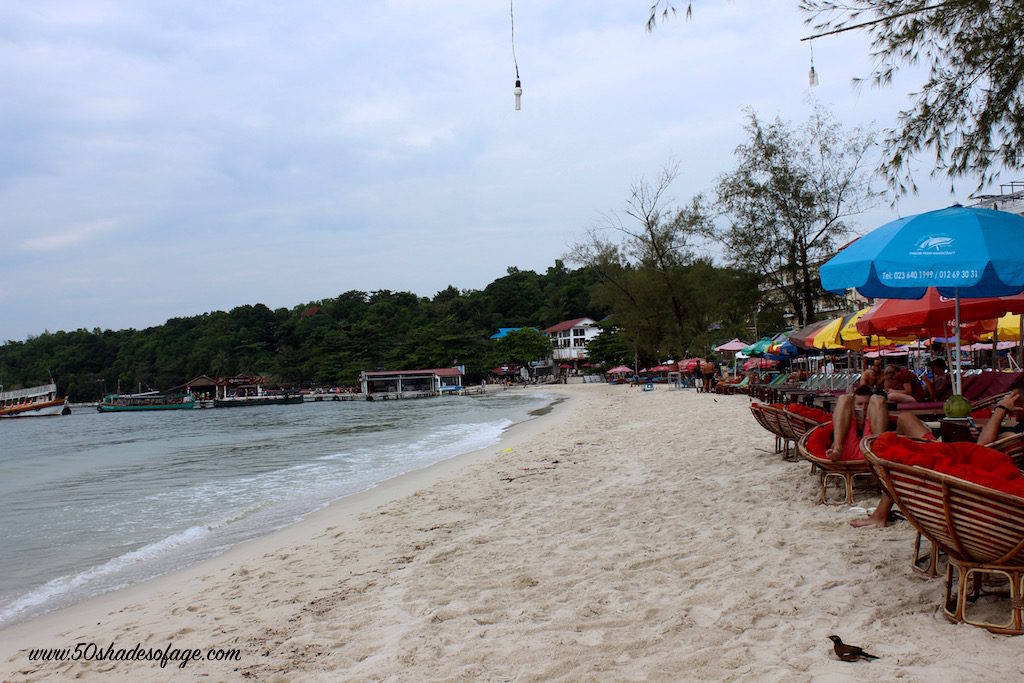 Here we grabbed ourselves a sun lounge complete with an umbrella outside one of the beach restaurant/bars, enjoyed a tasty Cambodian-style seafood lunch, a cold beer, a manicure for me by one of the roving beauticians and a lovely encounter with a cute little Cambodian boy called “Darren” (which I doubt was his real name!) We spent the afternoon enjoying the beach dipping in and out of the ocean. 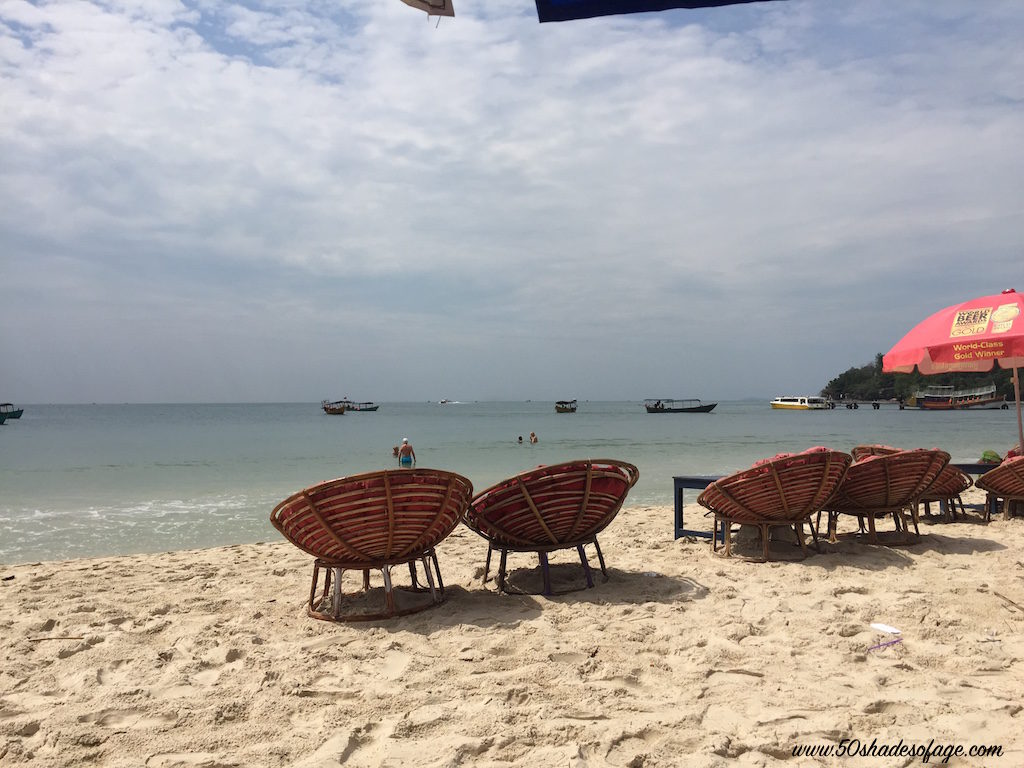 Although my first impressions of Sihanoukville were not good, the day ended up on a positive note. I had to remind myself that we were in a third-world country which had endured the Khmer Rouge regime and although there appeared to be a lot of poverty and unsanitary living conditions, the local people seemed happy. There are some things that we Westerners take for granted back home and that is that we have the best living conditions in the entire world!

Spread the love
CambodiaSihanoukvilleSouth East Asia CruiseSouth-East Asia
By 50 Shades, May 13, 2016 Kathy was a 50 something year old when she started up this blog 6 years ago, but has since turned over another decade and is now in her early 60s. She is married with two adult children and lives on the Tweed Coast of New South Wales, Australia. Kathy enjoys living life to the fullest and loves to keep fit and active by maintaining a healthy diet and exercising regularly. Some of her interests include reading, photography, travelling, cooking and blogging! Kathy works part-time as a freelance writer but her real passion is travelling and photographing brilliant destinations both within Australia and overseas and writing about it.