In part two of our USA travel itinerary, we visited the grand old city of New York, or as the locals call it ‘The Big Apple’. You know what they say about it “it is so good you have to say it twice – New York, New York”. Well I can vouch for that. It is a city packed with a tapestry of different cultures, a mega-cultural hub, the pulse of the world’s financial system, sprawling parks interlaced with skyscraper buildings and packed with pure unadulterated excitement. 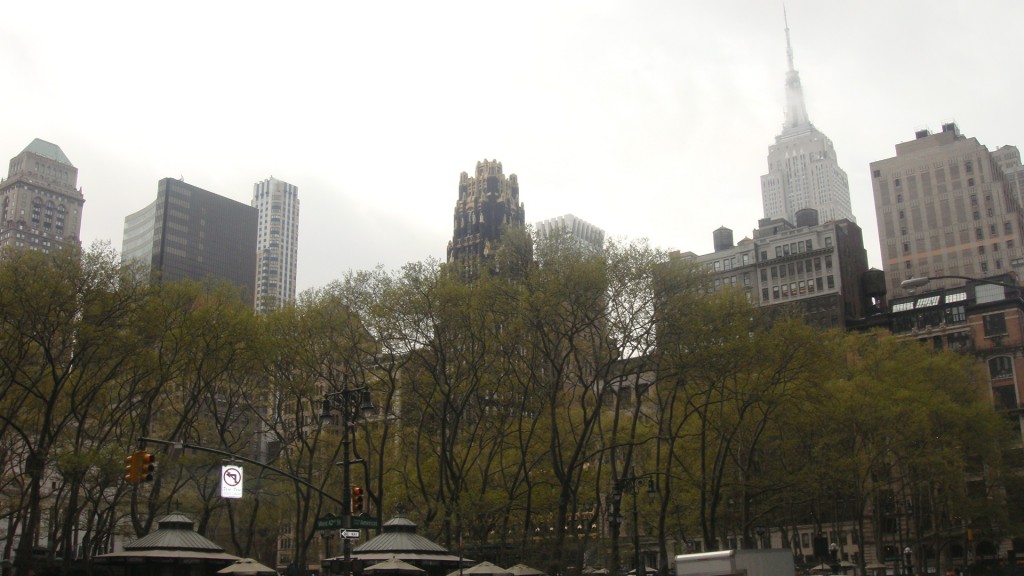 New York City is in Northeastern United States, in southeastern New York State, approximately halfway between Washington, D.C. and Boston. The location at the mouth of the Hudson River, which feeds into a naturally sheltered harbour and then into the Atlantic Ocean, makes it a significant trading port. Most of New York City is built on the three islands of Long Island, Manhattan, and Staten Island, making land scarce and encouraging a high population density. 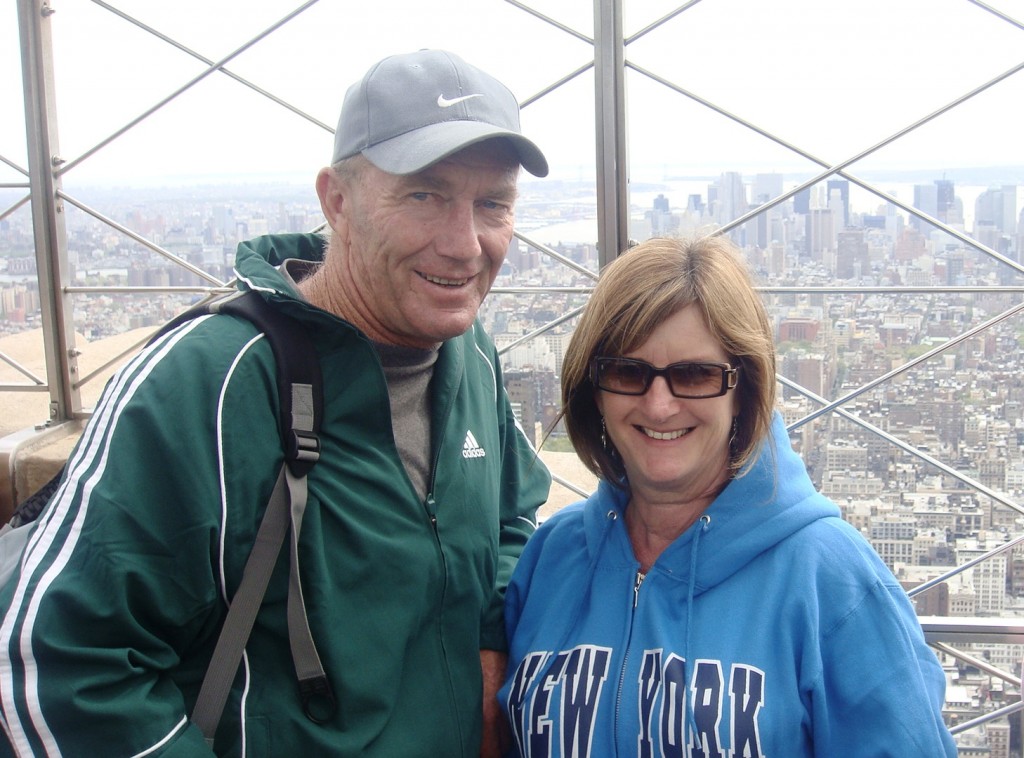 Things To do and See in New York

During our six day stay our itinerary was as follows:

Day One – We arrived into JFK Airport in the evening, as we crossed a time zone and lost three hours in time, we could barely see the skyline due to heavy rain and low cloud.  No sooner had we made our way out to the front of the airport, we were pounced upon by a friendly driver offering us a good deal to drive us into the city.  This driver proved to be an ‘encyclopedia of knowledge’ on all that was New York.  He had that broad ‘Brooklyn accent’ and barely stopped once to draw breath but he was extremely helpful. 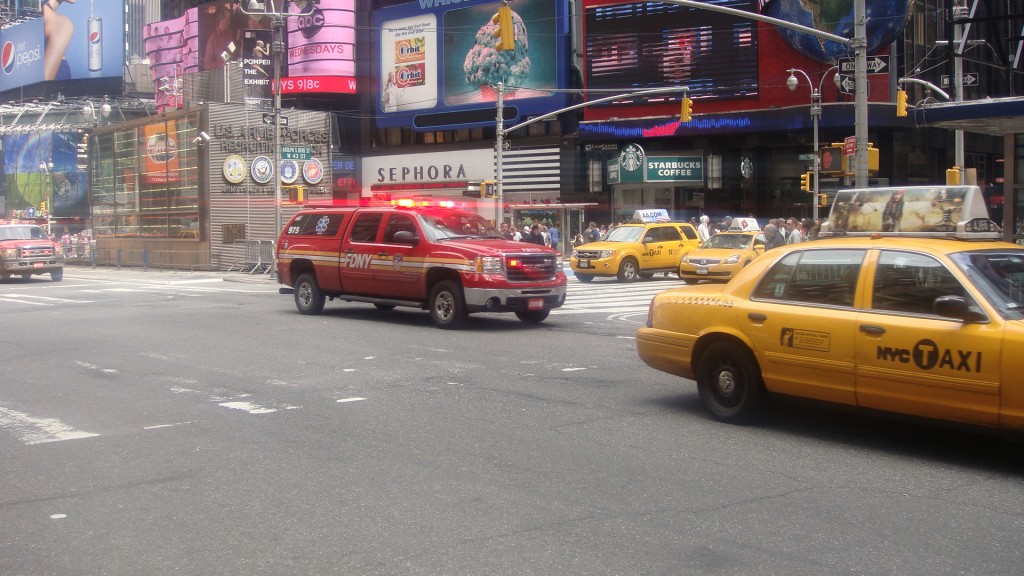 I remember getting my first glimpse of the skyline of Manhattan as we crossed the Brooklyn Bridge and I thought, “wow this is New York”!  We disembarked at our hotel, which was a grand old hotel with an immense foyer, called the New Yorker.

Day Two – We set off on foot to Times Square and Broadway taking in the sight of the huge neon signs and theatre billboards. 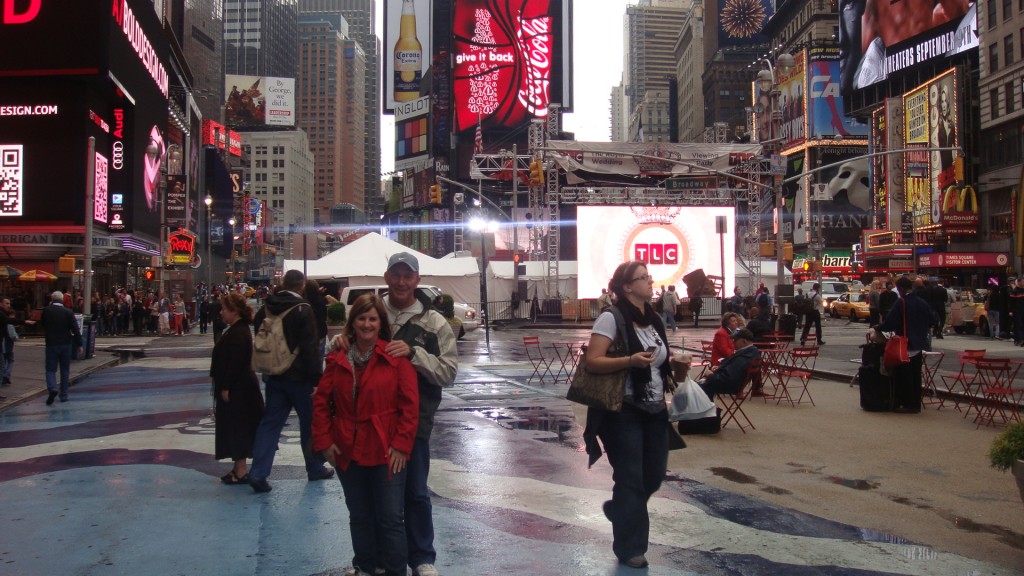 We visited the architecturally splendid Grand Central Station, which has the most beautiful interior design, a celestial ceiling mural and tall arched lead-light glass windows which allow in the natural light. 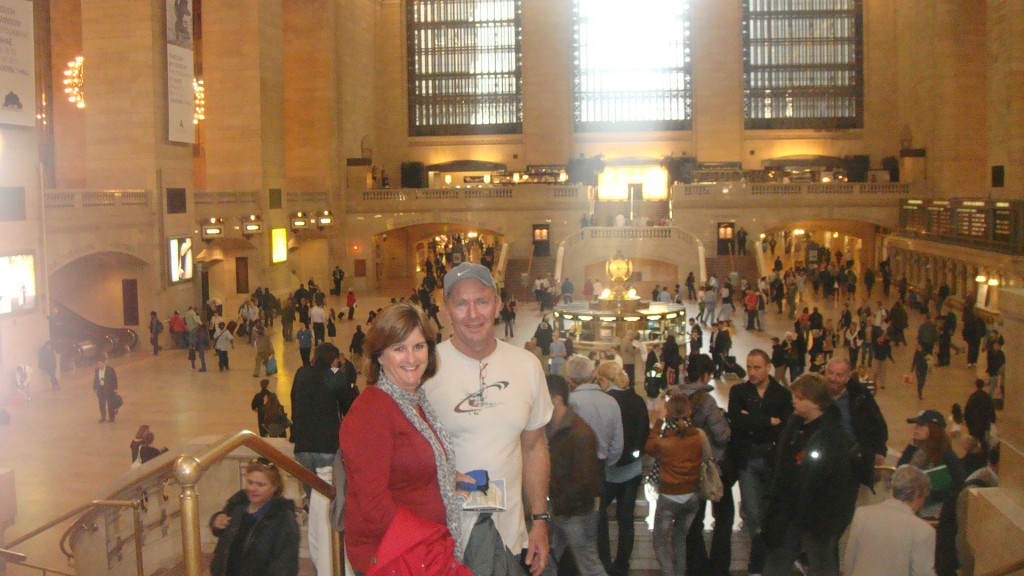 Nearby were the New York Public Library building and Bryant Park, where we got to hug a New York policeman and watched the locals play chess on the gigantic chess boards on the pavement. 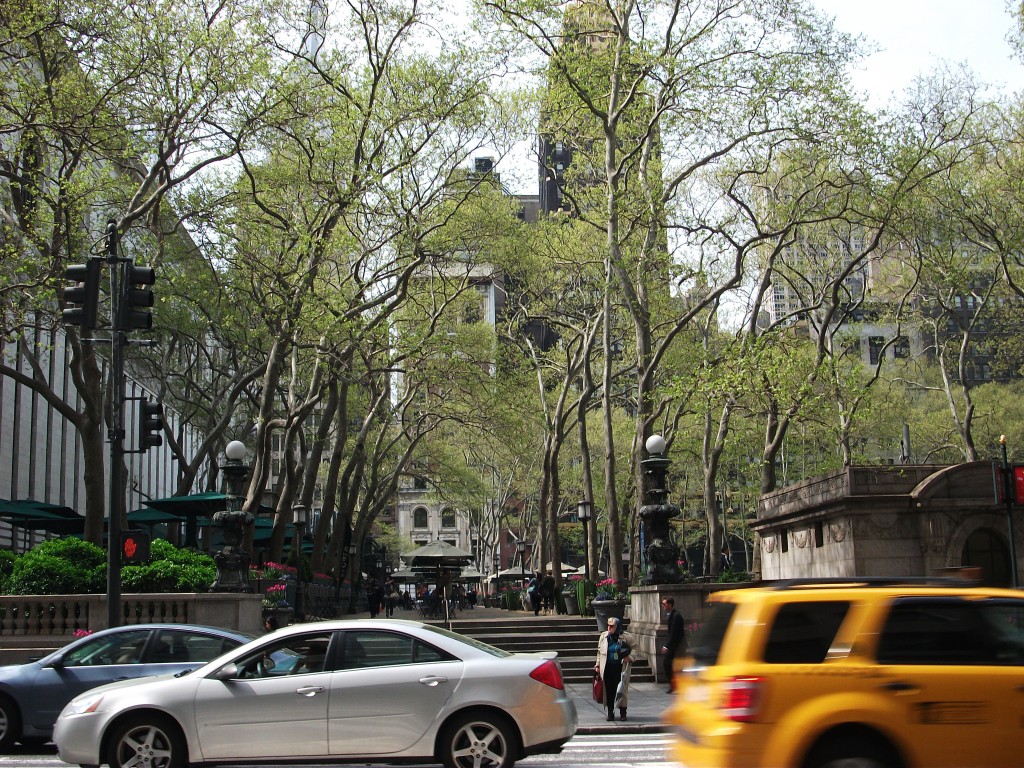 Stopping by the Rockefeller Centre, we decided to save the Top of the Rock Observation Deck, which gives panoramic views around New York, for another day. 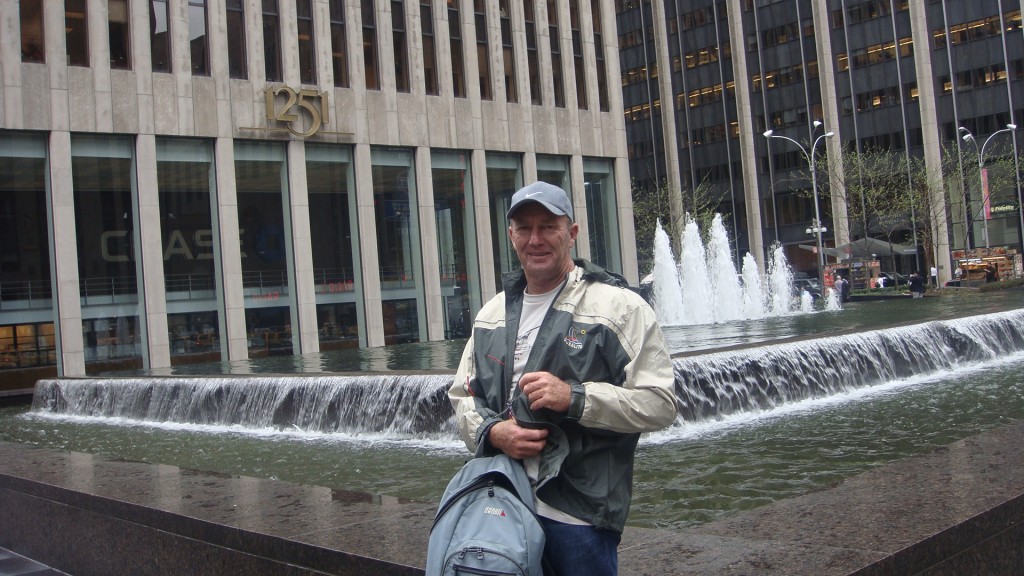 Catching a train on the subway, we ventured downtown to Washington Square and ambled around the park admiring the pretty blossoming trees and squirrels darting around the park. 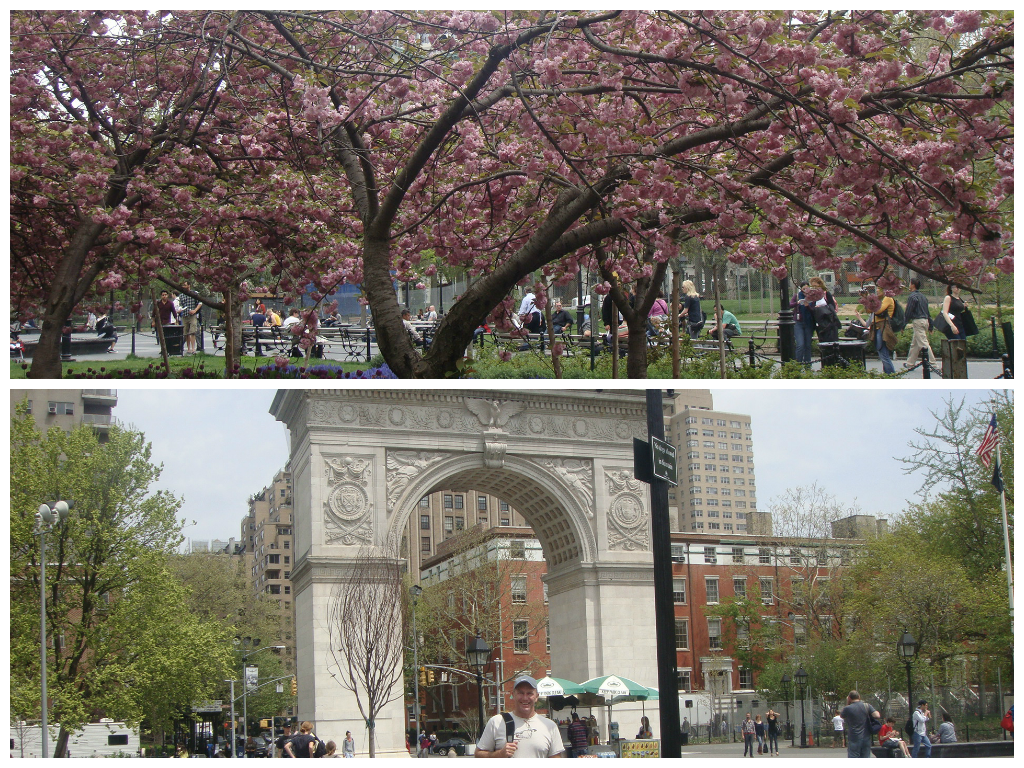 Nearby was the quirky neighbourhood of Greenwich Village which we explored looking at the unique shops, bars and restaurants. This neighbourhood of quaint brownstones clustered along tree-lined cobblestone streets remains virtually unchanged since the 19th century. 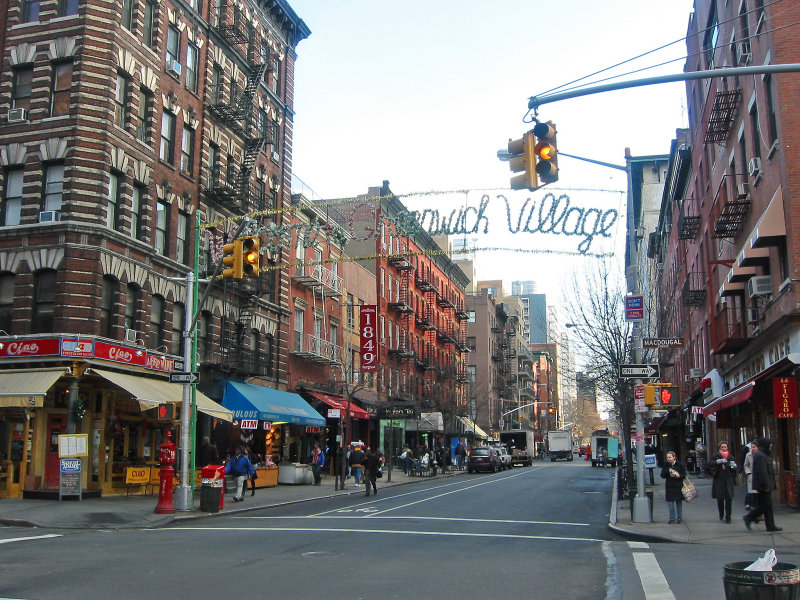 Next stop was Little Italy where we partook in a delicious authentic Italian meal at one of the many al fresco restaurants lining the footpaths. 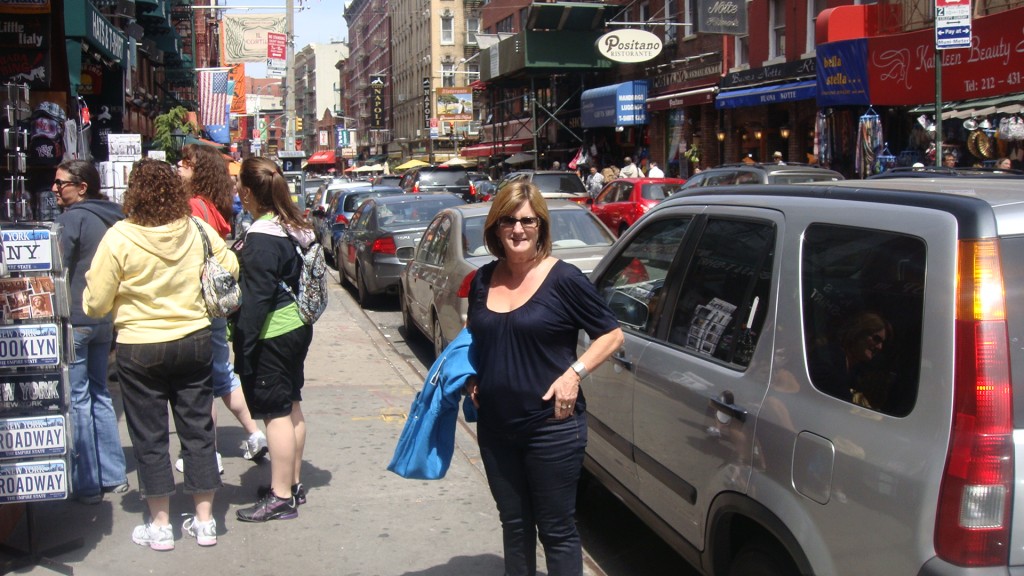 We headed back uptown on the subway to the World Trade Centre where the rebuilding on the Ground Zero site was underway following the events of 9/11. Our emotions soared with sadness as we walked around the area where once stood the Twin Towers of the World Trade Centre and it was difficult to comprehend the carnage on that particular day. Even more emotional was a walk around the Ground Zero Museum which exhibited pieces of debris, personal belongings and photos of that disastrous day. 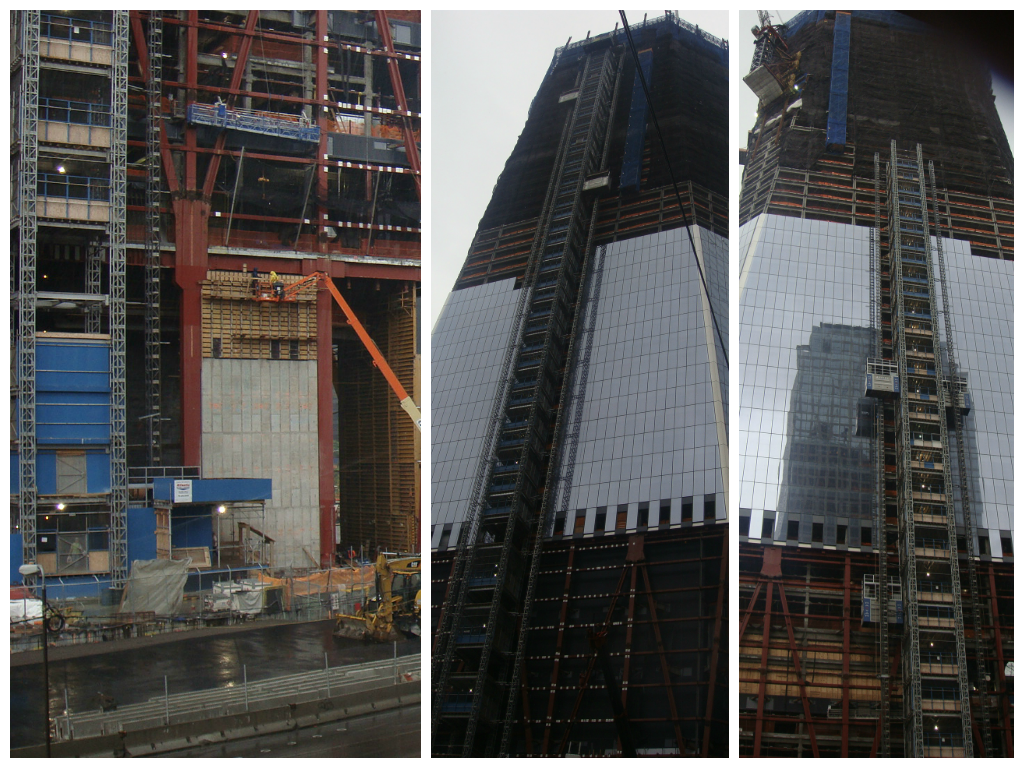 Battery Park is on the southern tip of Manhattan Island in New York City, facing New York Harbour. The Battery is named for the artillery batteries that were positioned there in the city’s early years to protect the settlement behind them. 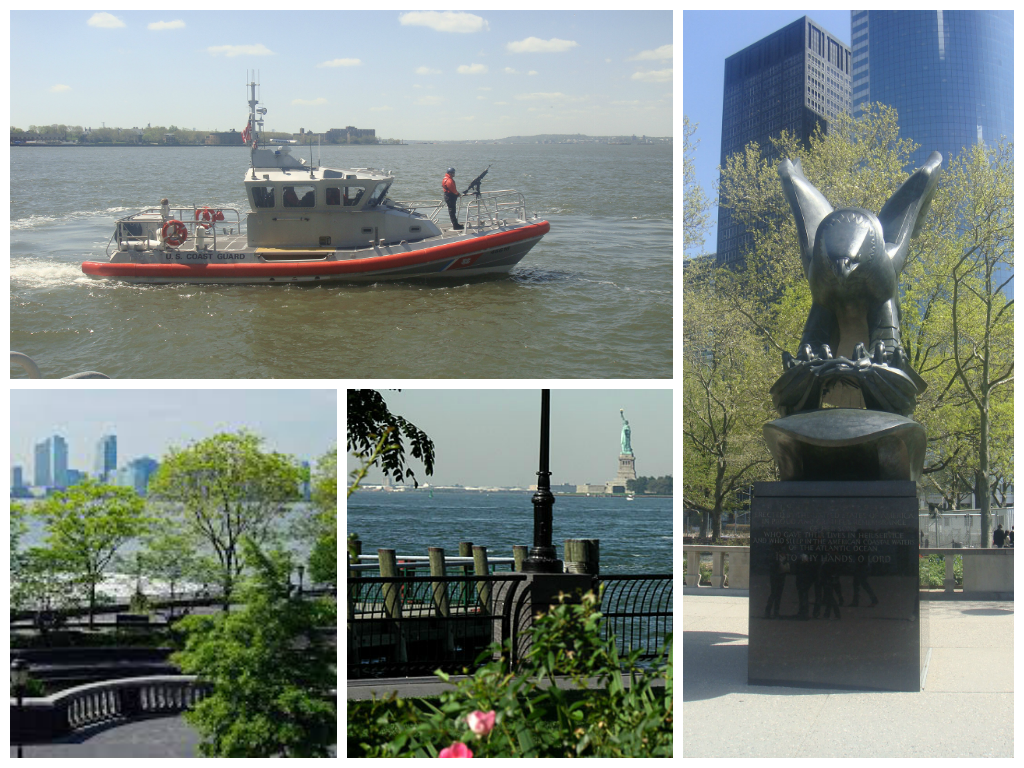 A short distance away is Wall Street, the famous Financial District of New York and the home of the New York Stock Exchange and many of the leading banking institution’s headquarters. We stopped to pat the ‘charging bull’ bronze statue which was crafted after the stock market crash of 1987 as a symbol of “aggressive financial optimism and prosperity”. Another interesting landmark is the historical Trinity Church built in 1846 on the intersection of Wall Street and Broadway, whose spire and cross was once the highest point in New York. 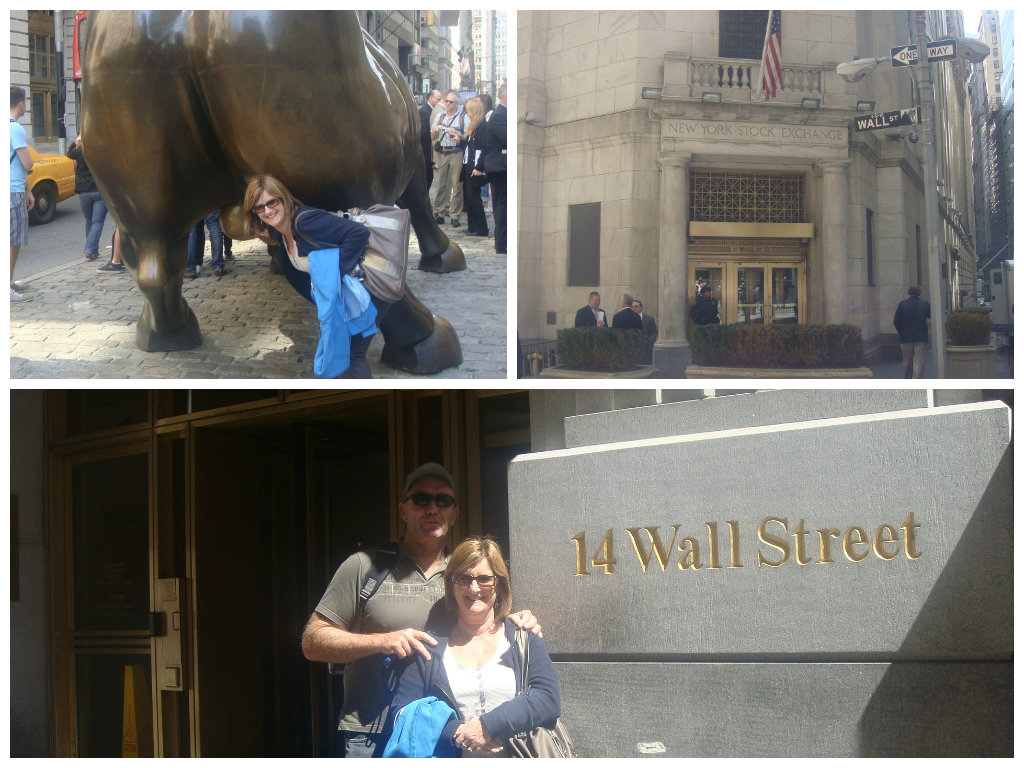 After a big day, we were thoroughly entertained by the Broadway hit show ‘Jersey Boys’.  It was a big highlight of our stay in New York. 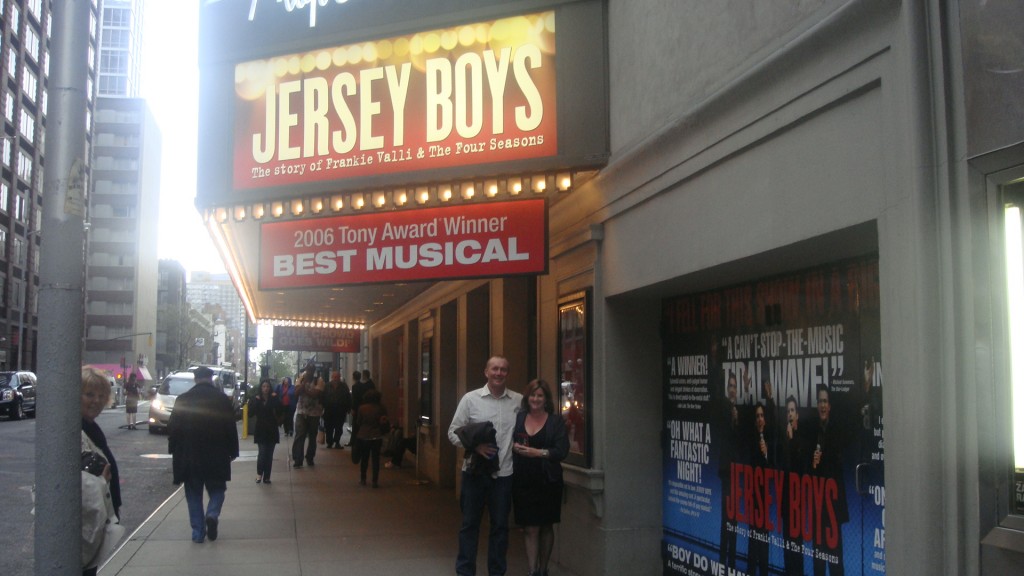 Day Four – A cruise out to the Statue of Liberty where we snapped plenty of pictures and then a stop at Ellis Island. This fully renovated centre, was once an immigrant processing centre for over 12 million people from Europe during the period 1890 to 1917. The place is huge and you can tour through the entire facility to get an idea of what it was like to be an immigrant alighting from a crowded ship after a long and arduous sea journey across the Atlantic to the shores of a new land. There are literally hundreds of photographs and videos of immigrants and you can even look up your heritage with extensive ancestry records on the premises. 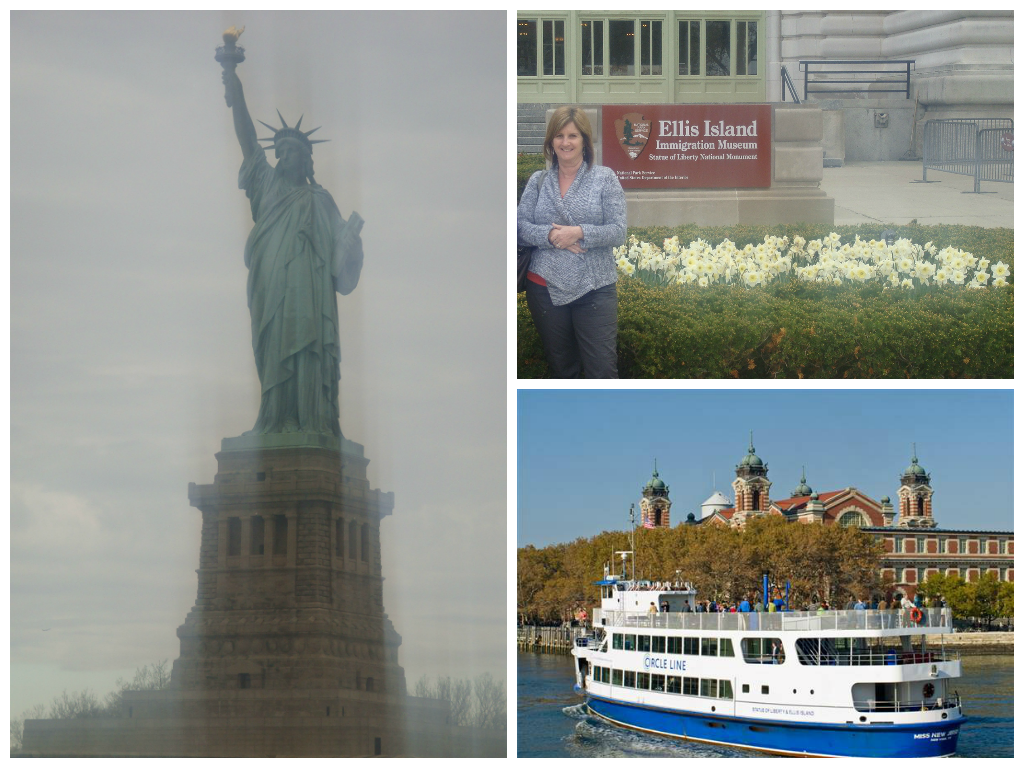 Day Five – A bicycle ride around the massive 341 hectares of the magnificent Central Park on a glorious Spring day. The facts and figures of the park are as follows:

The park contains several natural-looking lakes and ponds that have been created artificially, extensive walking tracks, bridle paths, two ice-skating rinks (one of which is a swimming pool in Summertime), the Central Park Zoo, the Central Park Conservatory Garden, a wildlife sanctuary, a large area of natural woods, a 43 Hectare billion-gallon reservoir with an encircling running track, and an outdoor amphitheater, the Delacorte Theatre, which hosts the “Shakespeare in the Park” summer festivals. Indoor attractions include Belvedere Castle with its nature centre, the Swedish Cottage Marionette Theatre, and the historic Carousel. 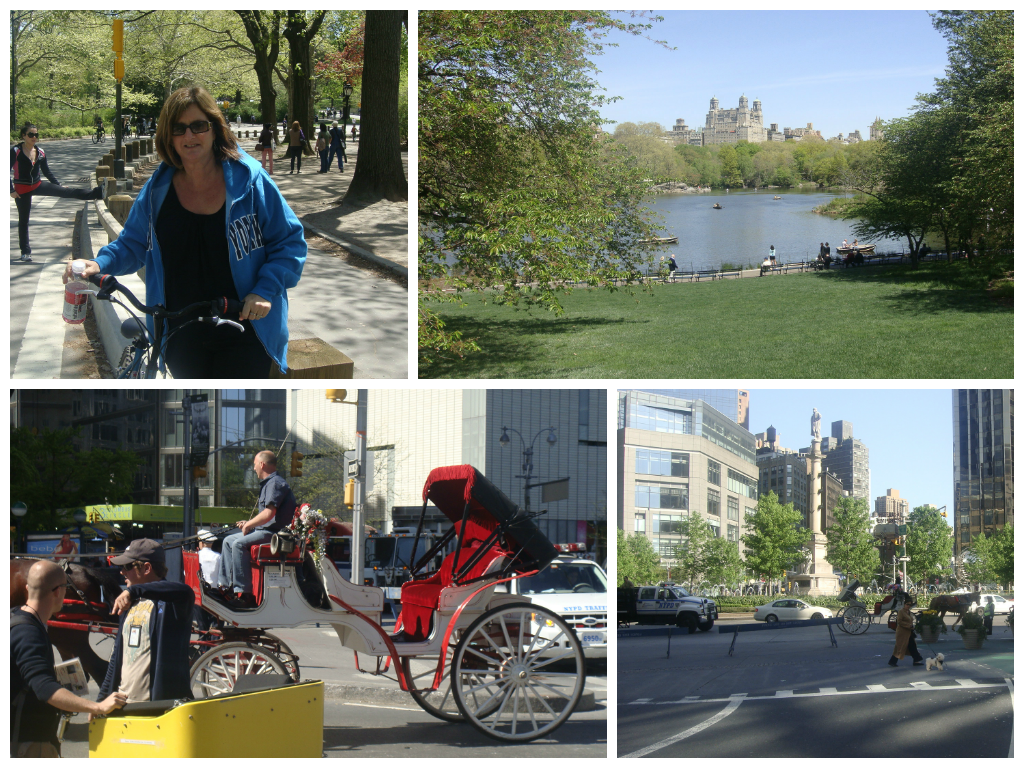 Afterwards we caught the subway to midtown and went up to the top of the Empire State Building observation deck and enjoyed the 360 degree views of the city of New York. The building is a 103 storey skyscraper with a roof height of 380 metres, and with its antenna spire included, it stands a total of 443 metres high and is the tallest building in New York.

The Empire State Building also has a motion simulator attraction located on the 2nd floor. Opened in 1994 as a complement to the observation deck, the New York Sky Ride is a simulated aerial tour over the city. 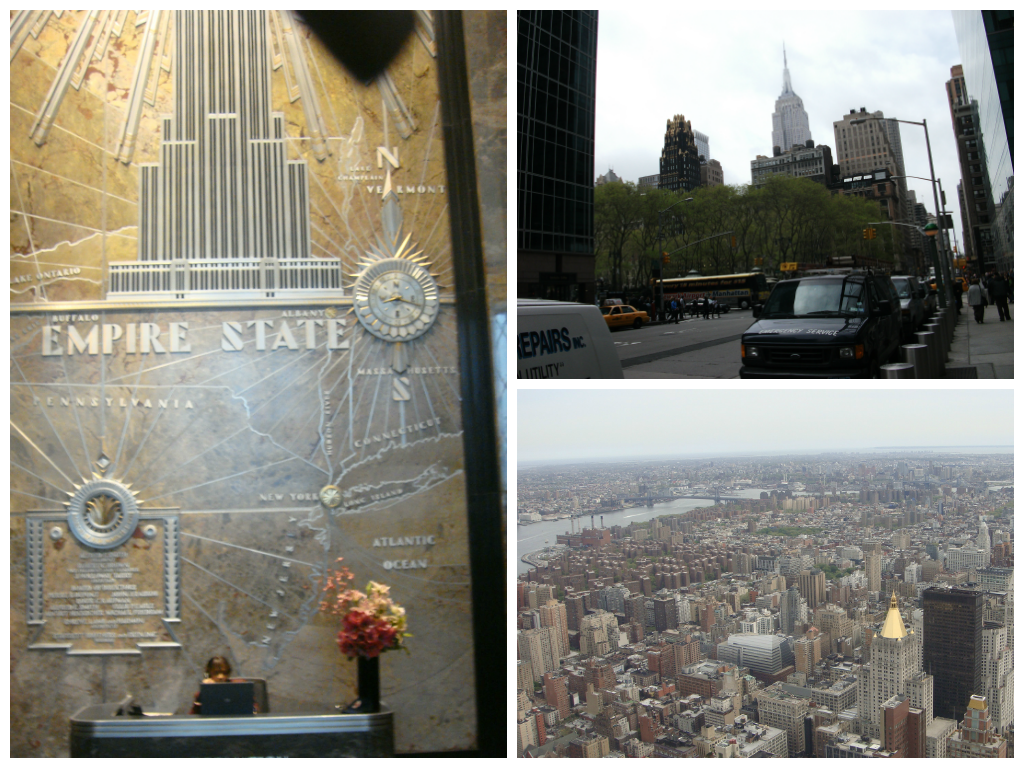 Day Six – Shopping day and what a day we had! We fought our way through the crowds at the discount department store called Century 21 where we purchased designer brand clothing and accessories at bargain prices. We shopped at Nike for sports clothing and sports shoes which were half the price of Australian stores. The massive Apple Store was worth a look as once again electronic gadgets are much cheaper in the US. Macy’s department store gobbled me up for hours and I still didn’t touch the surface! There was barely enough room in my suitcase to lug all of my purchases home. 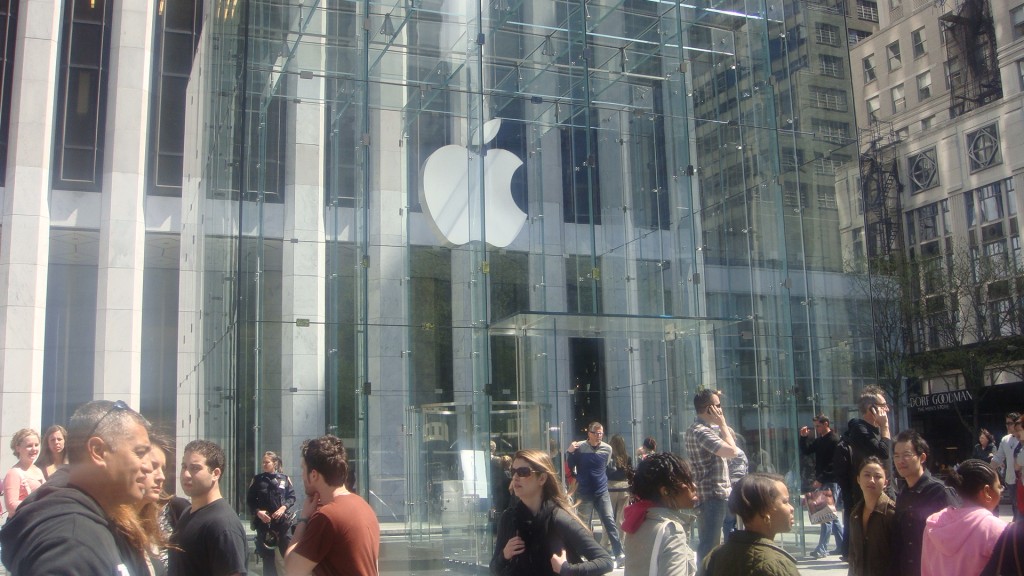 New York did bring out the romantic in me with such venues as Central Park with its horse drawn carriages, the grand lady of the Statue of Liberty, the observation deck at the Empire State Building, the grandeur of Grand Central Station and the elegance of Broadway and its theatres. It was also a shopaholics dream come true with its huge department stores such as Macy’s, Bloomingdales and Saks and the upmarket designer brand stores in Fifth Avenue, such as Tiffany & Co, Bergdorf Goodman, Cartier and Gianni Versace. New York is amazing, wonderful, fantastic, and many other superlatives that don’t come to mind.

Spread the love
ManhattanNew YorkSightseeing New YorkTravel USA
By 50 Shades, October 8, 2014 Kathy was a 50 something year old when she started up this blog 6 years ago, but has since turned over another decade and is now in her early 60s. She is married with two adult children and lives on the Tweed Coast of New South Wales, Australia. Kathy enjoys living life to the fullest and loves to keep fit and active by maintaining a healthy diet and exercising regularly. Some of her interests include reading, photography, travelling, cooking and blogging! Kathy works part-time as a freelance writer but her real passion is travelling and photographing brilliant destinations both within Australia and overseas and writing about it.