Hiking and Walking on The Tweed 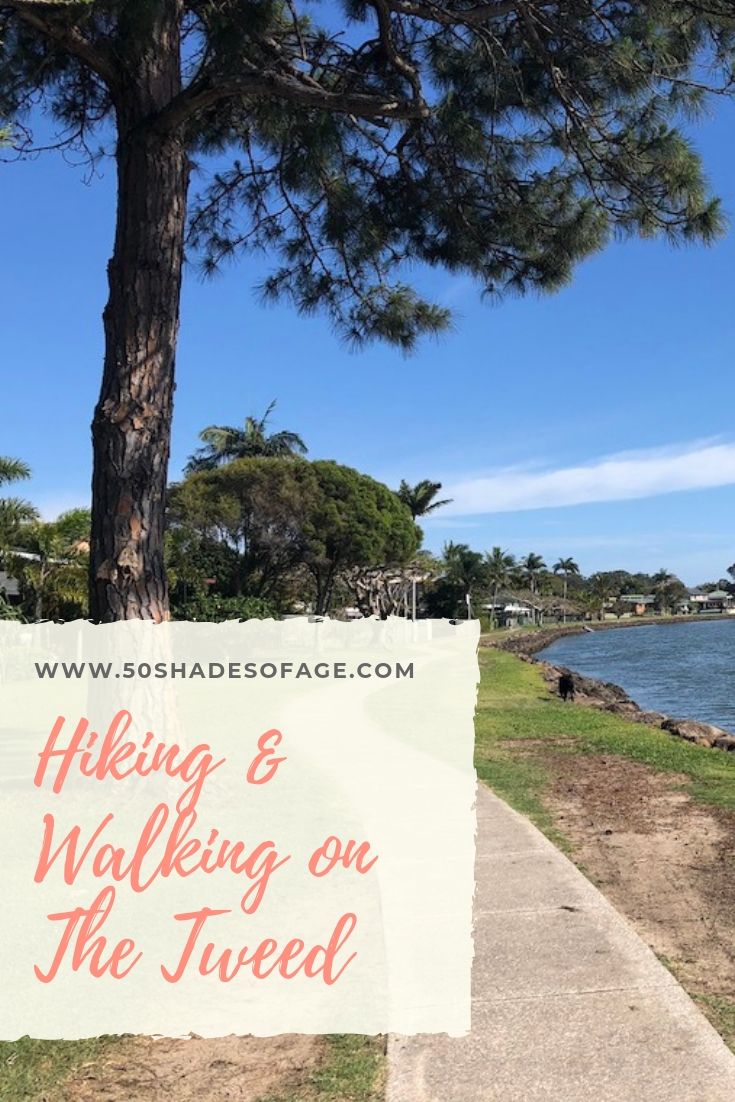 My new backyard on the Tweed Coast of New South Wales offers the best of both worlds with exquisite beaches, rivers and creeks and a lush green hinterland, also known as the “Green Cauldron”. For hikers and walkers of all levels of experience and fitness there are literally hundreds of walking trails in the region. In my opinion the best way to explore the region is by hiking and walking on The Tweed. Here I have included some of my favourites.

Generally I walk from Kirra in Queensland past Coolangatta Beach, around Greenmount, Rainbow Bay and then up to Point Danger. But for a walk with a difference try starting the walk from across the border in Tweed Heads. Start at the Tweed Visitor Centre in Bay Street, Tweed Heads and trace the path around Jack Evans Harbour on the Tweed River past Twin Towns Services Club.

Keep following the harbour around until you get to the Tweed River Bar and the adjoining beach called Duranbah, or Dbar for the locals, a famous surfing beach. Take the stairs and climb to the top of Point Danger for breathtaking views over the ocean. It’s a great spot for a picnic, grab a coffee from Dbar Cafe, whale watch in season and stand in two states at once on the borderline that separates Queensland from New South Wales. 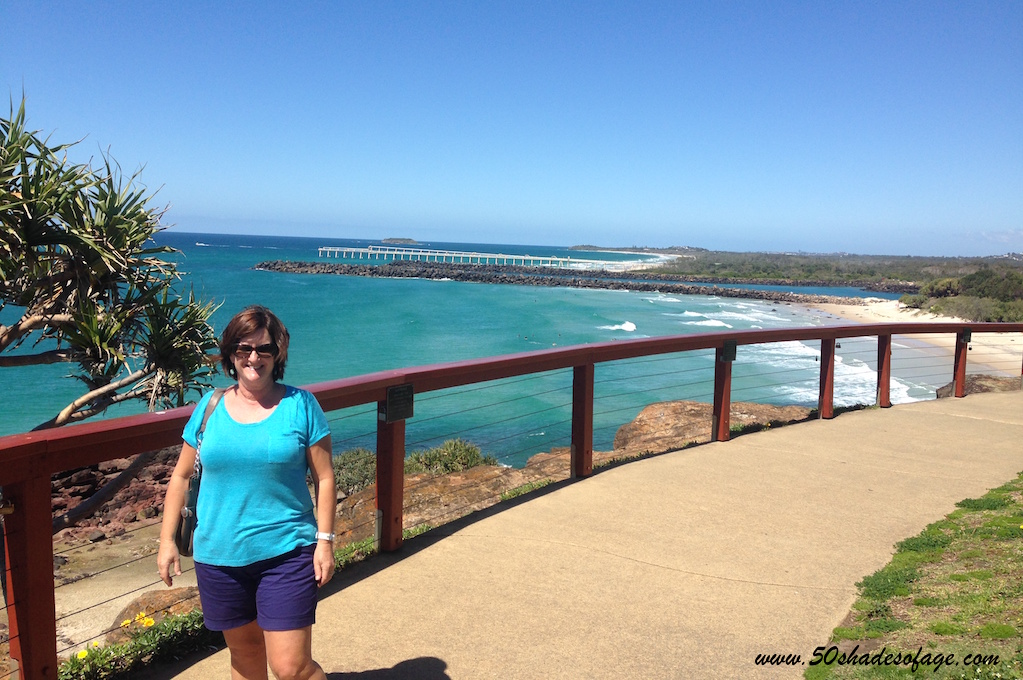 Point Danger is brimming with interesting facts about Australian maritime history. Here you will find the Captain Cook Memorial, moulded from cast iron actually jettisoned from the Endeavour and recovered in the 1960s. Next to it is the lighthouse which was the first to experiment (unsuccessfully) with laser light. Memorial plaques are positioned along ‘Centaur Remembrance Walk’ to those lost at sea. 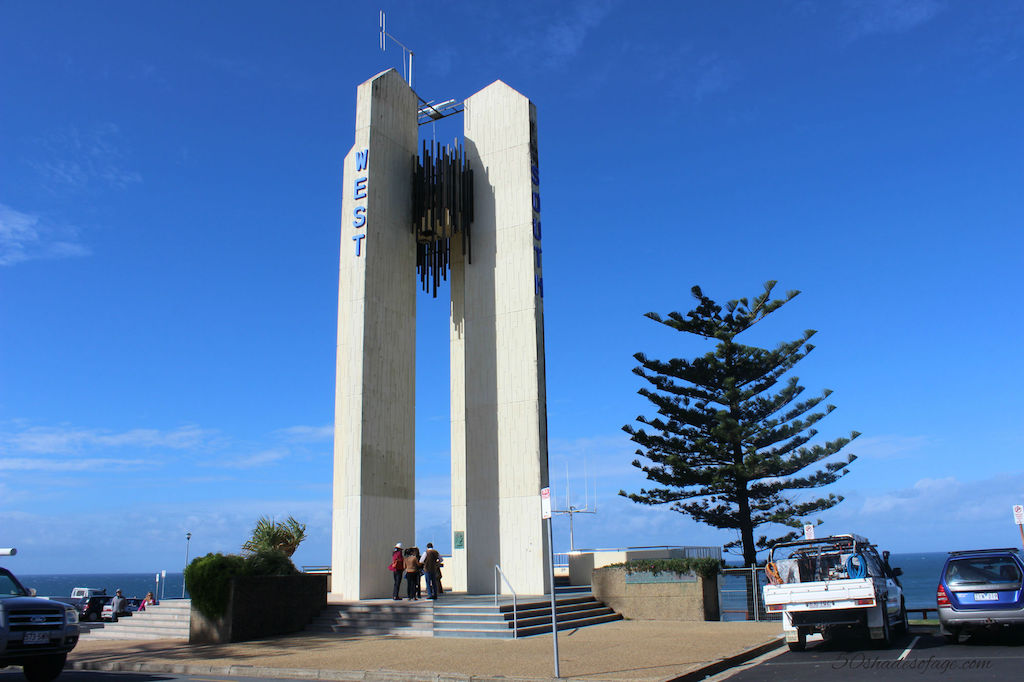 From here you can make your way down to Froggies Beach, past the sea baths to Snapper Rocks (where the Quicksilver Pro is held each year) and to the beautiful little bay at Rainbow Bay. 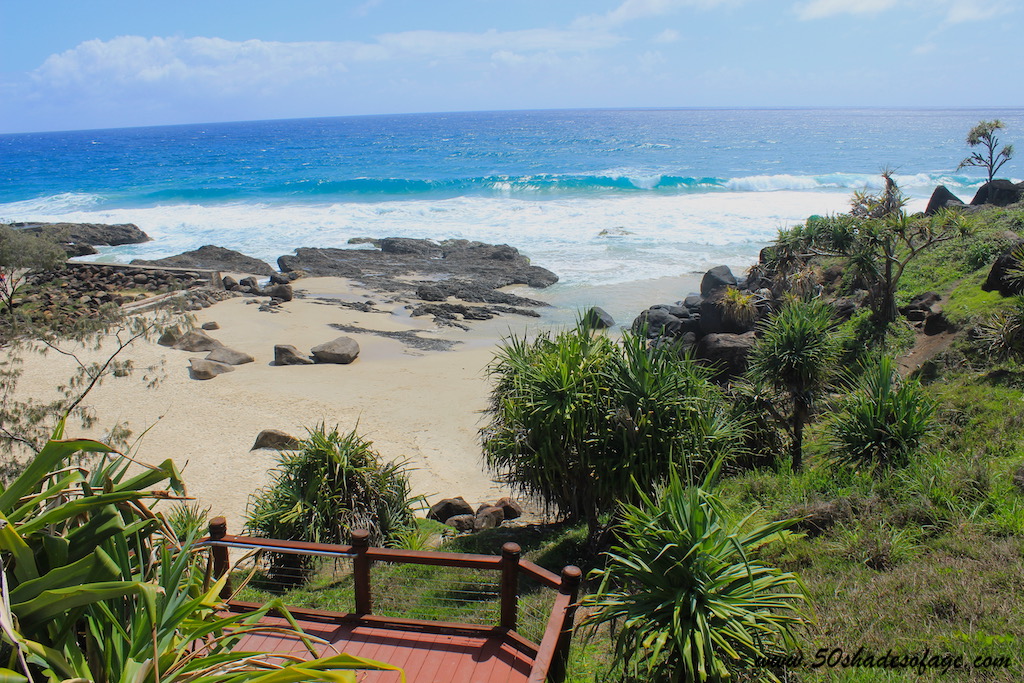 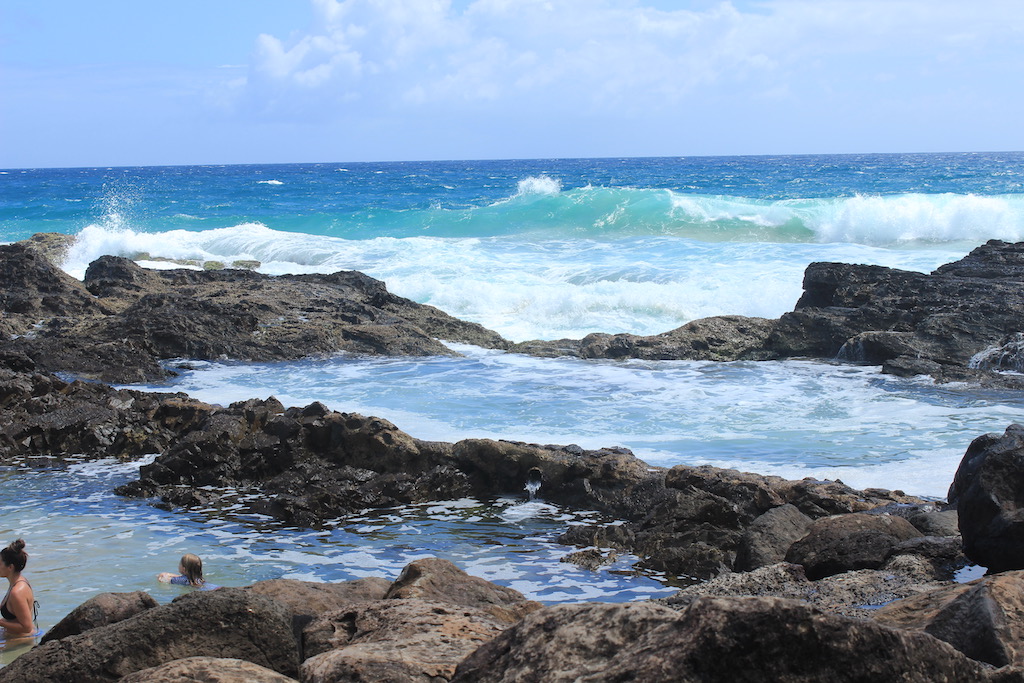 Further around is Greenmount Point, a coastal headland separating the Greenmount beach and the adjoining Rainbow Bay to the east. The walk along the path that fringes the beach is particularly scenic with places to stop to take in the views and stairs that take you up to a lookout at the top of Greenmount. Once you reach Greenmount Beach Surf Club it’s only a short distance back to the starting point of your walk. 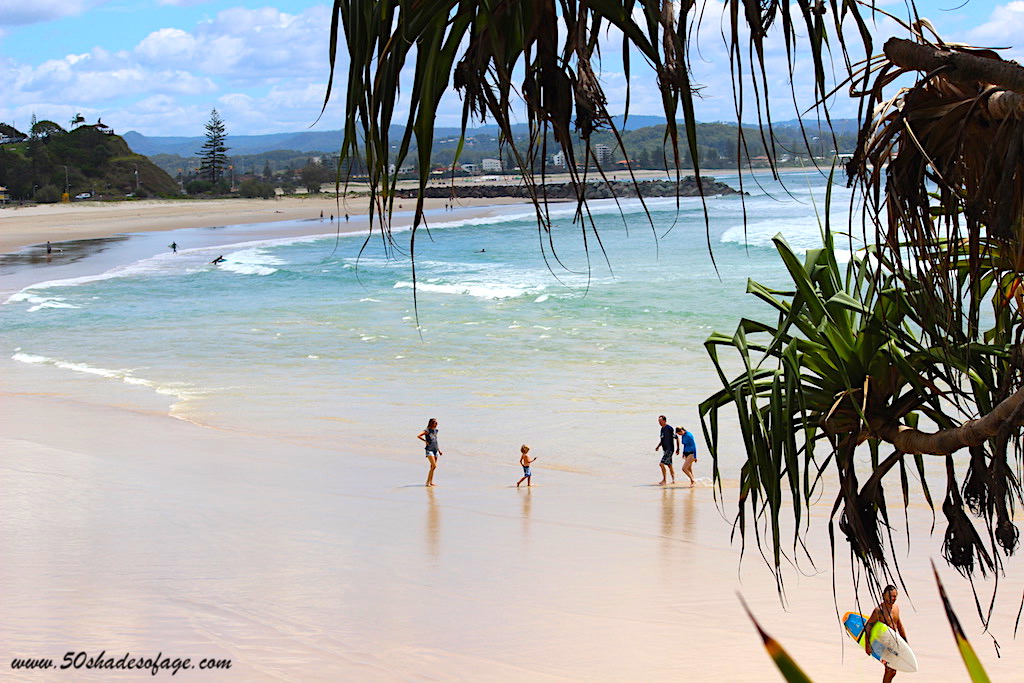 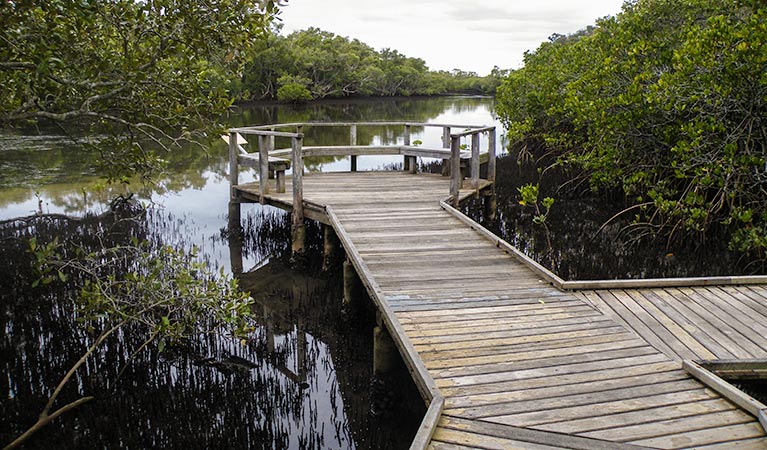 Although only a short walk of only 1.2 kilometres this walk is a great way to learn about the indigenous heritage of Tweed Heads. It commences from Minjungbal Aboriginal Cultural Centre in Kirkwood Road, Tweed Heads. The walk takes you through mangroves and out over the waters of the Tweed River before returning to a well preserved Bora Ring. It’s a great opportunity to experience Aboriginal cultural heritage, sacred sites and beautiful natural scenery, with fantastic birdwatching and photography opportunities. 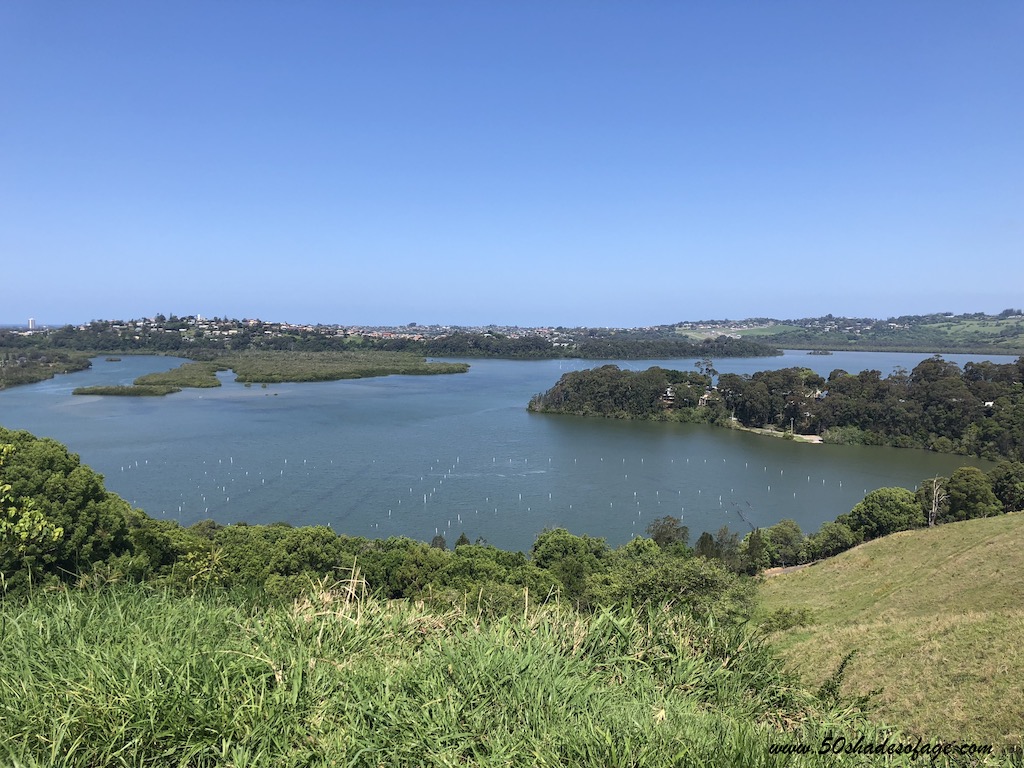 Terranora Creek, a wide body of water with a number of small islands, branches off the Tweed River just inside the estuary and winds its way westwards through Tweed Heads West and Bilambil. We discovered this beautiful walk when we were living in Tweed Heads West. This walking path is accessible behind Seagulls Rugby League Club. Follow the path behind the fenced-off compound and the walk commences just past the Oyster Farm. It follows the shoreline of Terranora Broadwater through thick leafy bushland on a flat dirt track to Bilambil where you will see loads of waterbirds, the oyster leases and fishing boats. Distance-wise I would guess it is around 6 kilometres return. 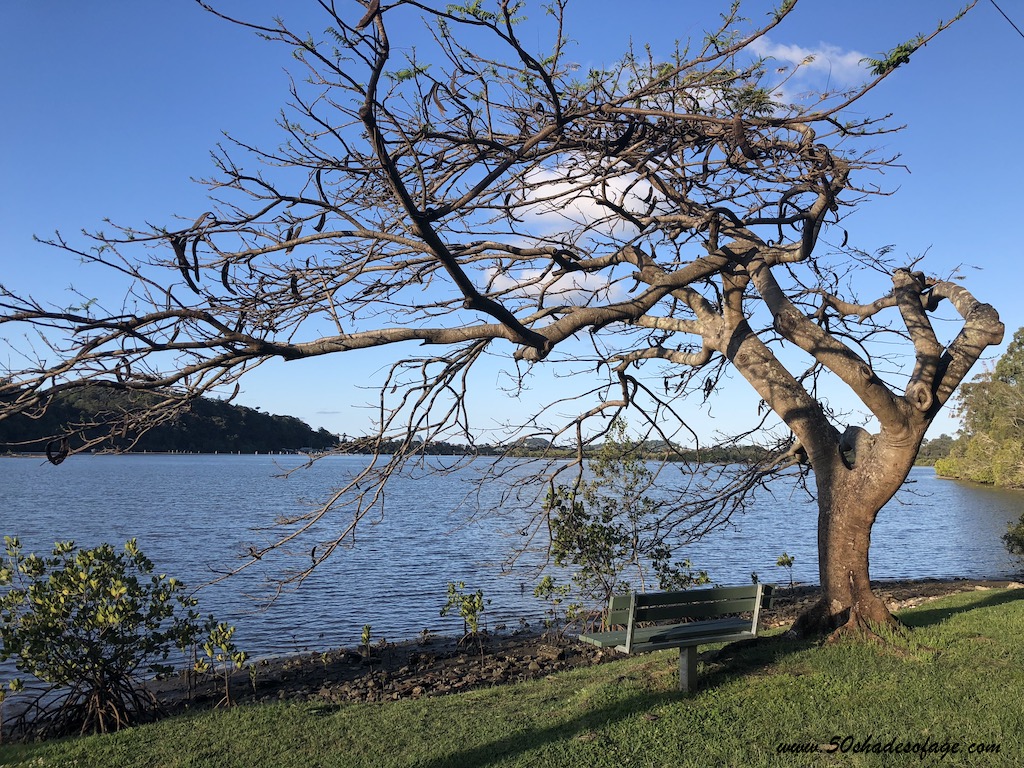 Otherwise you can walk along pathways on the banks of the Terranora Creek with access off Lakes Drive, Tweed Heads West where there is a boat ramp and jetty. There are a couple of sandy beaches where you can swim and plenty of places for throwing a line in. The walk eventually takes you through grassy parklands and mangroves to Terranora Broadwater, but it’s fenced off so you can’t continue past this point. 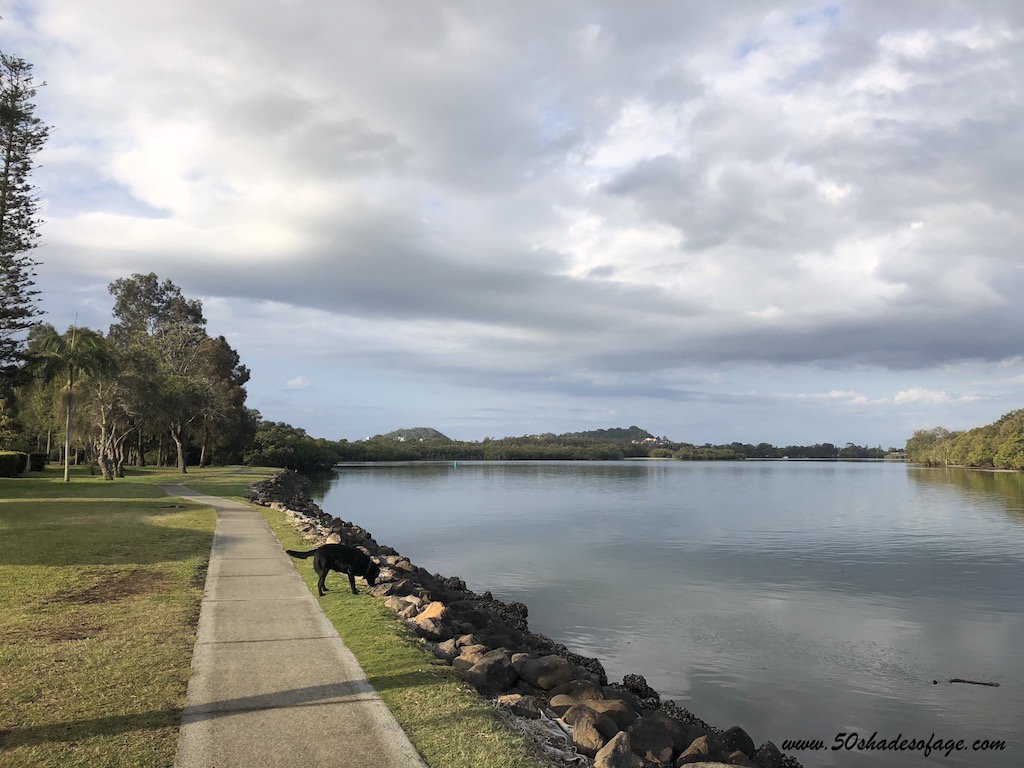 There is a pathway that follows the coastline commencing at the northern end of Kingscliff, past the Bowls Club, Caravan Park and Cudgen Surf Club to the boardwalk that fringes Cudgen Creek. Follow the creek along until you reach the bridge and then keep walking along the Kingscliff South Beachfront until you eventually see the beautiful beach homes that marks the commencement of Salt Village and Casuarina Beach development. 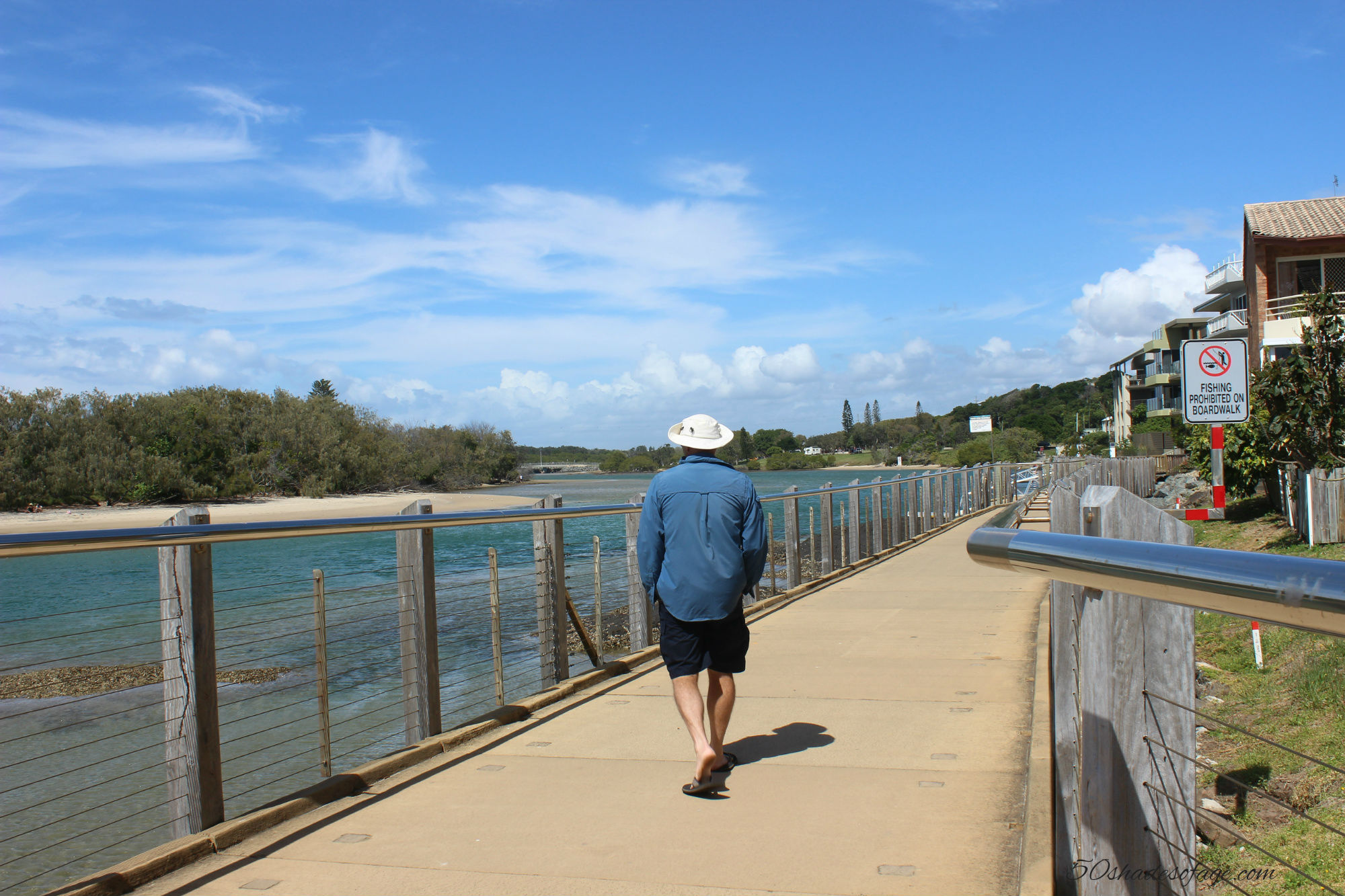 Heading south the path traces the coastline along between grand beach homes, landscaped natural parkland and the coastal vegetation on the sand dunes of the beach. There are beach access paths, quirky beach showers, some sculptures, bench seats, timber bridges across little creeks, timber boardwalks and thick overhanging trees in patches which makes for a nicely shaded walk. 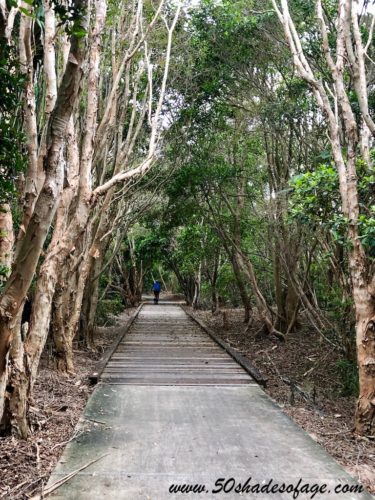 A canopy of Casuarina trees on the pathway

At the end of the Casuarina development you take a right hand turn and walk about 200m to the pathway that runs adjacent to Tweed Coast Road. It is then only a few kilometres to the beachside holiday village of Cabarita Beach. Walk through the town centre past the Cabarita Surf Club and up a hill to the headland that is a great place to take a break with amazing scenery to take in. 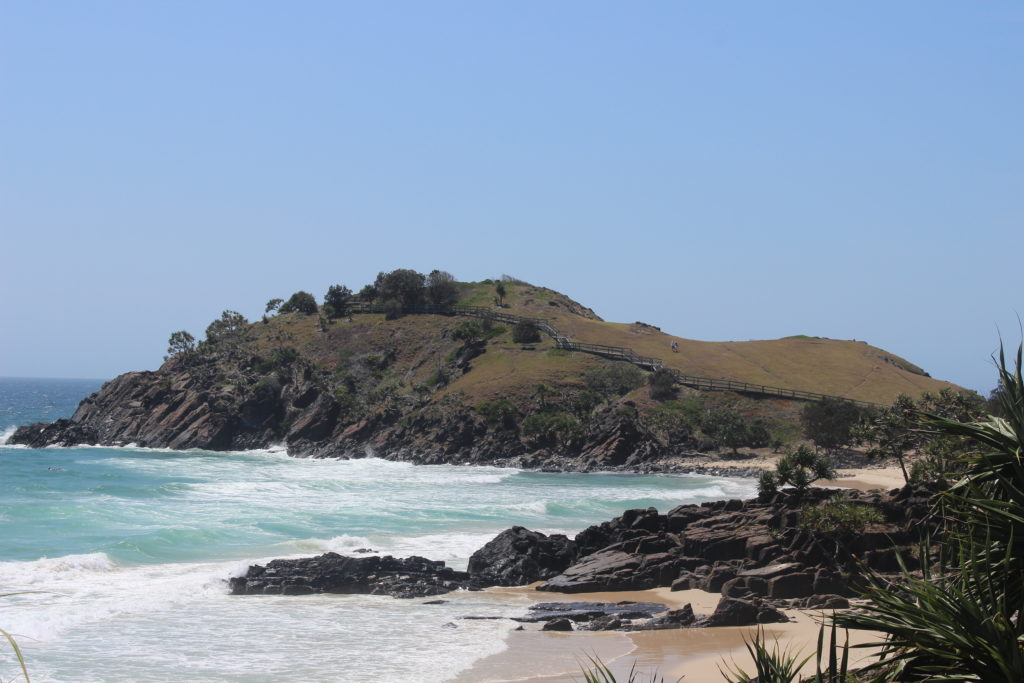 This walk is 10.5 kilometres one way, but is such a pretty walk it will only feel like it’s half this distance! The path does continue down the Tweed Coast all the way to Pottsville if you’re feeling even more energetic.

Wollumbin is the aboriginal name for Mt Warning National Park and actually has sacred significance. Mt Warning is an extinct volcano that erupted around 23 million years ago and stands 1,156 metres tall. The pointed rocky tip of the mountain can be seen for kilometres and is somewhat of an icon of the Border Mountain Ranges. 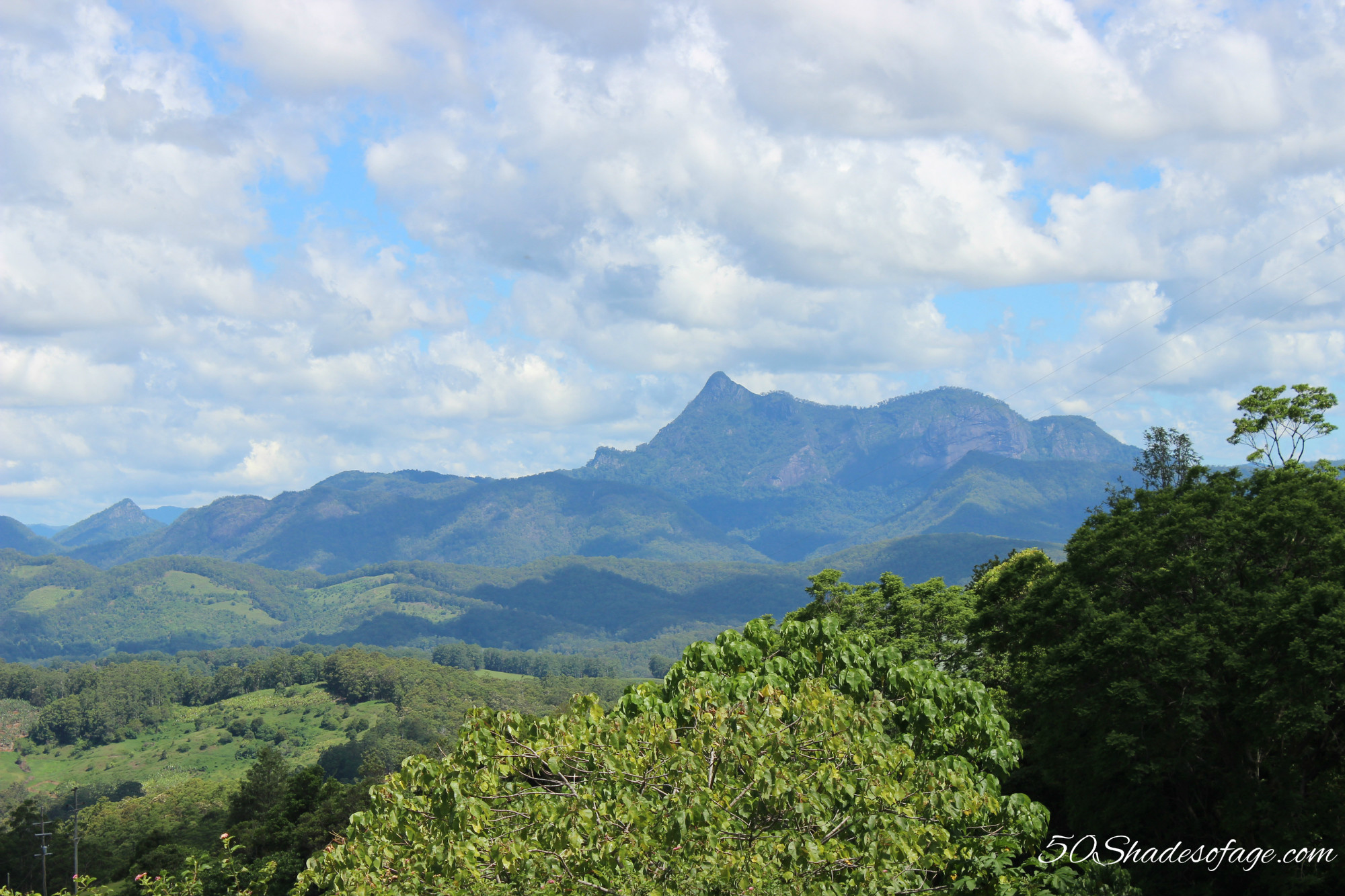 Possibly one of the most challenging hikes that I have undertaken, but the rewards are unsurpassed. The walk is 9 kilometres return up stairs and then a winding path with a challenging final rock scramble to the summit of the mountain. The walk takes you through stunning scenery and offers magnificent views of the Tweed Valley and beyond. Although the 300 metre rock scramble at the summit is challenging, it does have a chain wire so that you can virtually pull yourself up the rockface. 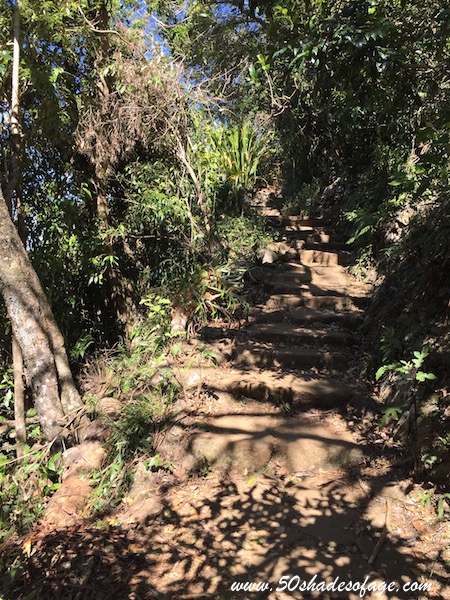 Stairs up the ascent to Mt Warning

Once you get to the top you’re rewarded with incredible views. A very popular time to do this climb is prior to sunrise when you can sit on top of the world and watch the sun come up! 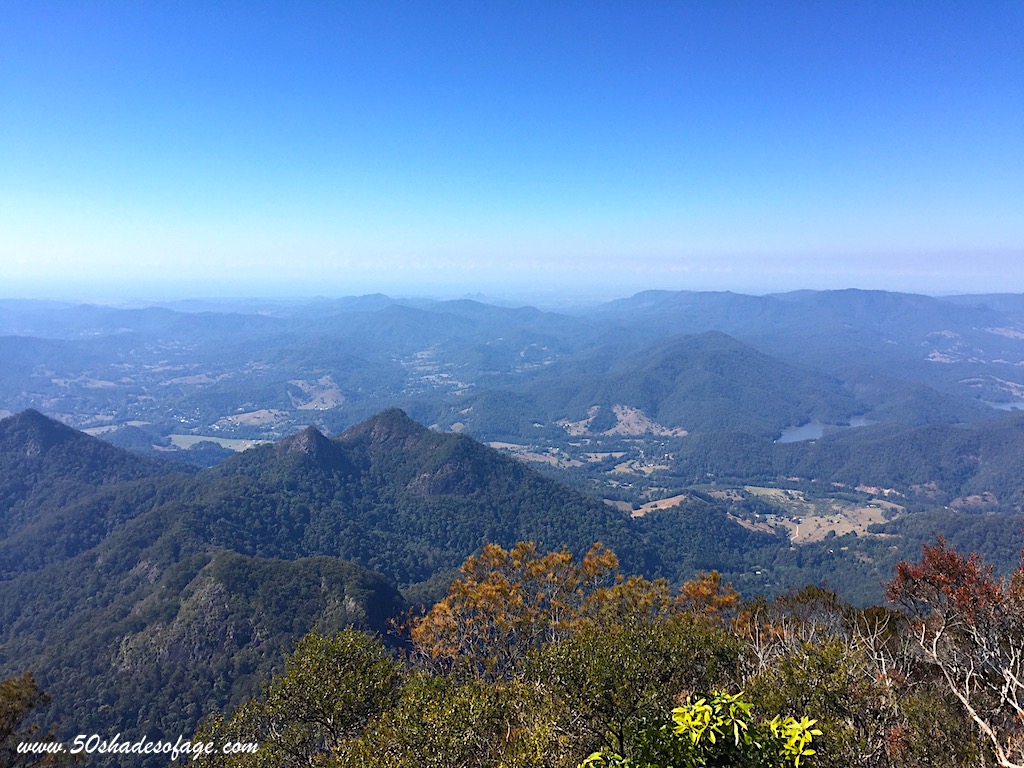 View From The Top of Mt Warning

The Tweed region is one big green cauldron and as such there are numerous mountain ranges and national parks offering fantastic walks and hikes. Other walks to try in the region are:

Next time you’re on The Tweed make sure you take the time to take a walk or a hike, either along the river, the beaches or into the lush greenness of the hinterland. You won’t be disappointed!

Spread the love
Northern RiversTravel NSWTweed Green CauldronTweed HeadsTweed Heads BeachesTweed River
By 50 Shades, June 28, 2019 Kathy was a 50 something year old when she started up this blog 6 years ago, but has since turned over another decade and is now in her early 60s. She is married with two adult children and lives on the Tweed Coast of New South Wales, Australia. Kathy enjoys living life to the fullest and loves to keep fit and active by maintaining a healthy diet and exercising regularly. Some of her interests include reading, photography, travelling, cooking and blogging! Kathy works part-time as a freelance writer but her real passion is travelling and photographing brilliant destinations both within Australia and overseas and writing about it.