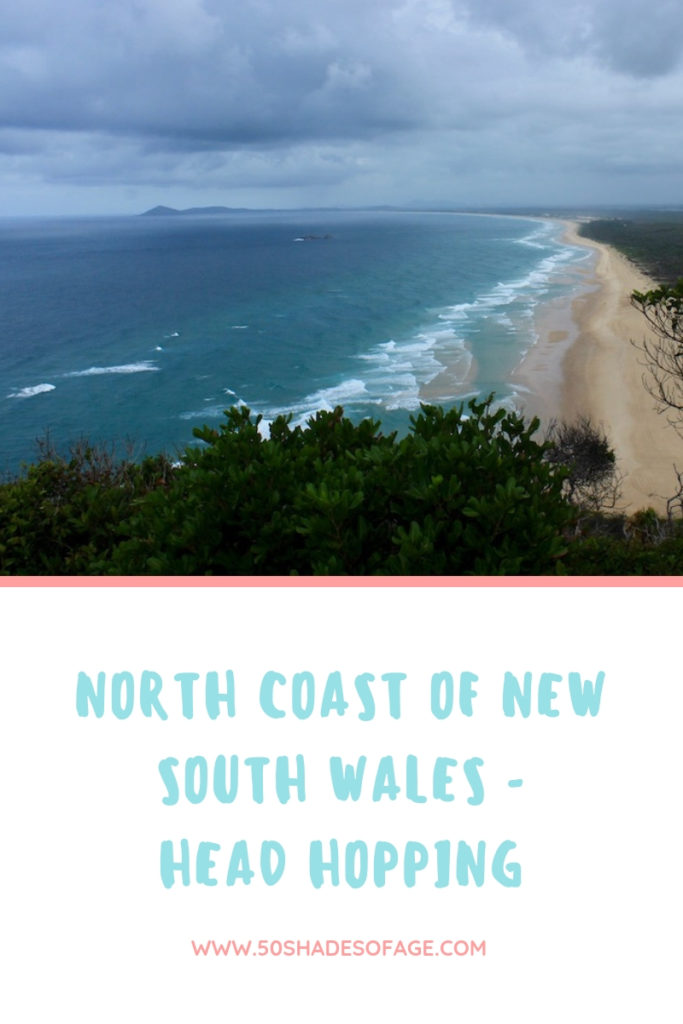 The coastline of Northern New South Wales from the Tweed Heads border down to Newcastle is approximately 677 Kms, known as the “Legendary Pacific Drive” and is made up of a series of coastal beach towns, uncrowded beaches and a striking volcanic hinterland. On one of our many jaunts down the North Coast of New South Wales – head hopping from beach town to beach town, we discovered some spectacular beaches protected by protruding headlands.

After departing Burleigh Heads we crossed the NSW border at Tweed Heads past Fingal Head, Brunswick Heads to Byron Bay and Broken Head, a distance of only 79 Kms. To go head hopping, in most cases it’s only a short detour off the Pacific Highway to reach some of these gorgeous little beachside spots. 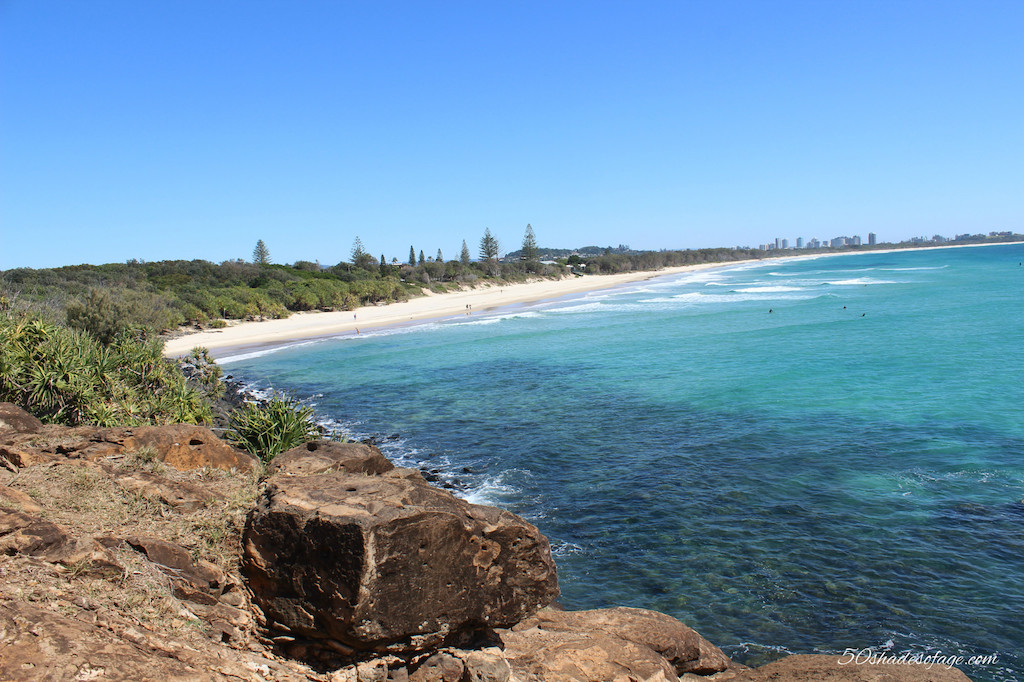 Byron Bay has it’s own headland known as Cape Byron, that is the most easterly point of Australia, marked by a lighthouse and a popular walking track from Watego’s Beach up to the cape. 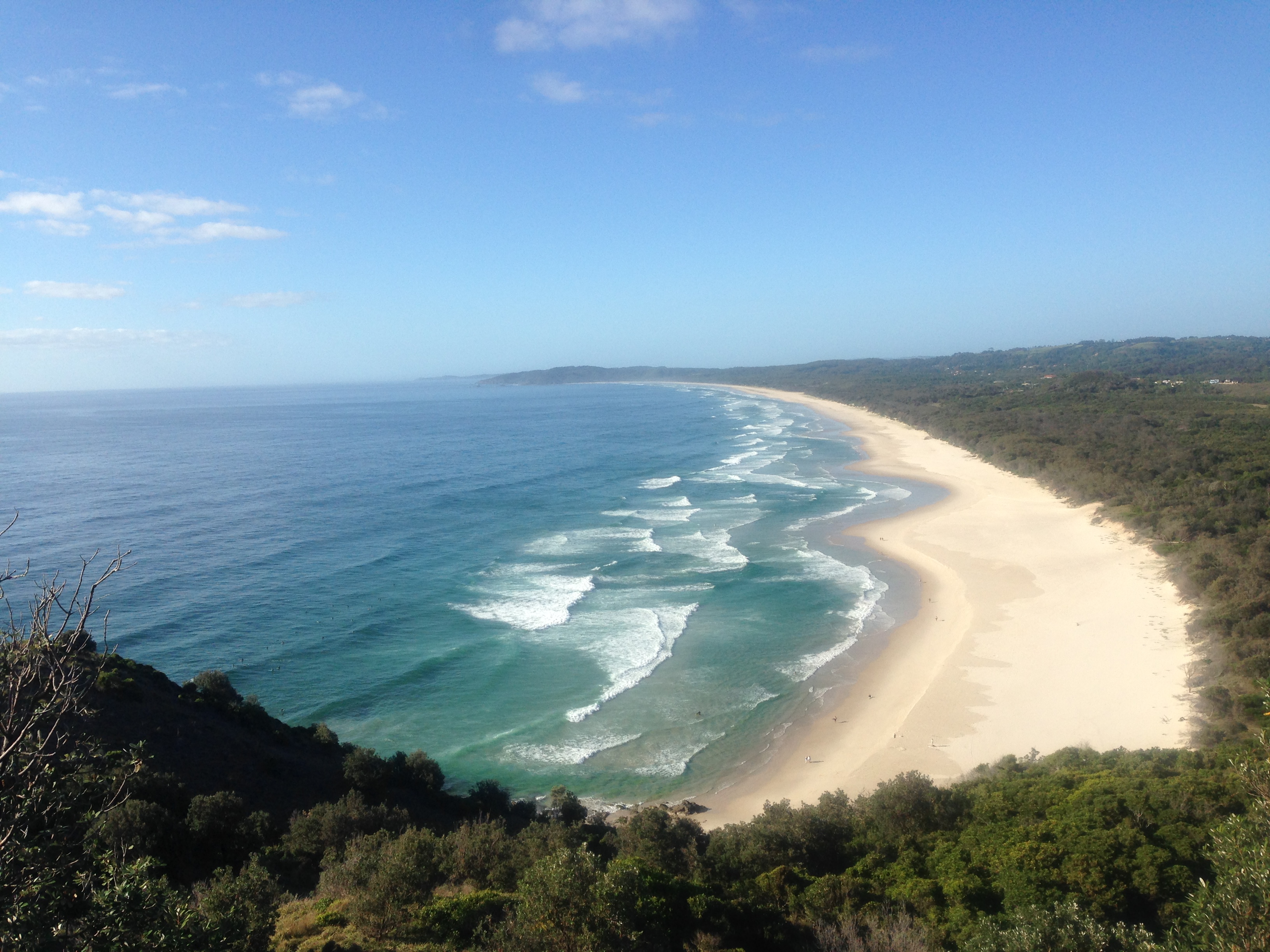 Just 12 kms south of Byron is the lovely little camping area and surfing spot known as Broken Head. We’ve spent many a Christmas camped in this great little camping ground, that is idyllically located near the headland and is surrounded by national park. It’s a great alternative to staying in the overly busy and crowded Byron Bay, but still close enough so that you can take advantage of the great eateries and shopping in town. 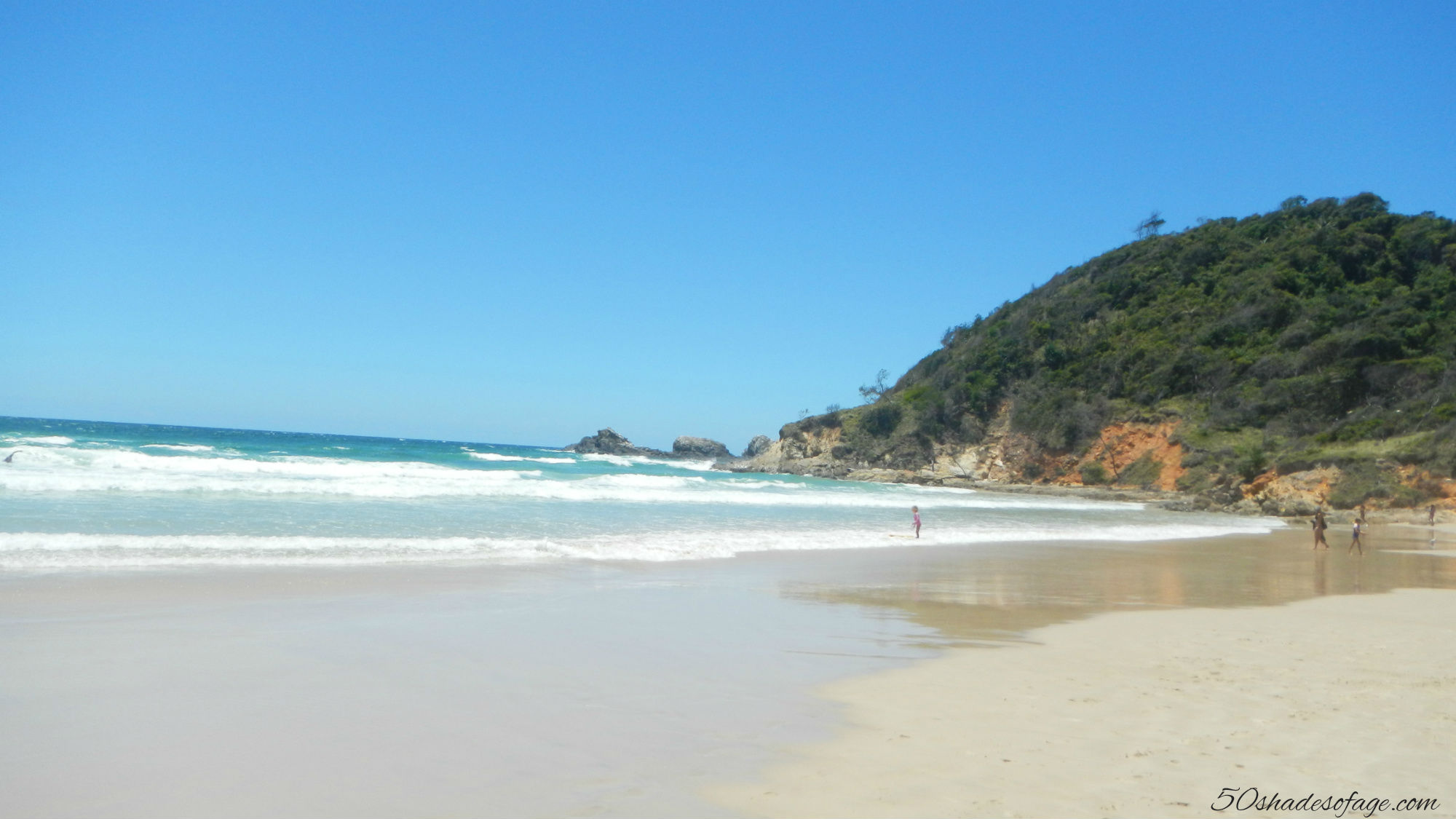 We continued 11 Kms to Lennox Head, past Skennars Head, Evans Head, Woody Head and Brooms Head through the Northern Rivers region to Red Rock Headland, where we spent two beautiful days. Throughout the years we’ve spent many a holiday camped at Evans Head and Lennox Head at the Lake Ainsworth Caravan Park, on the freshwater tea-coloured lake adjacent to the beach. Whilst Woody Head is another family favourite of ours, located near the fishing village of Iluka. 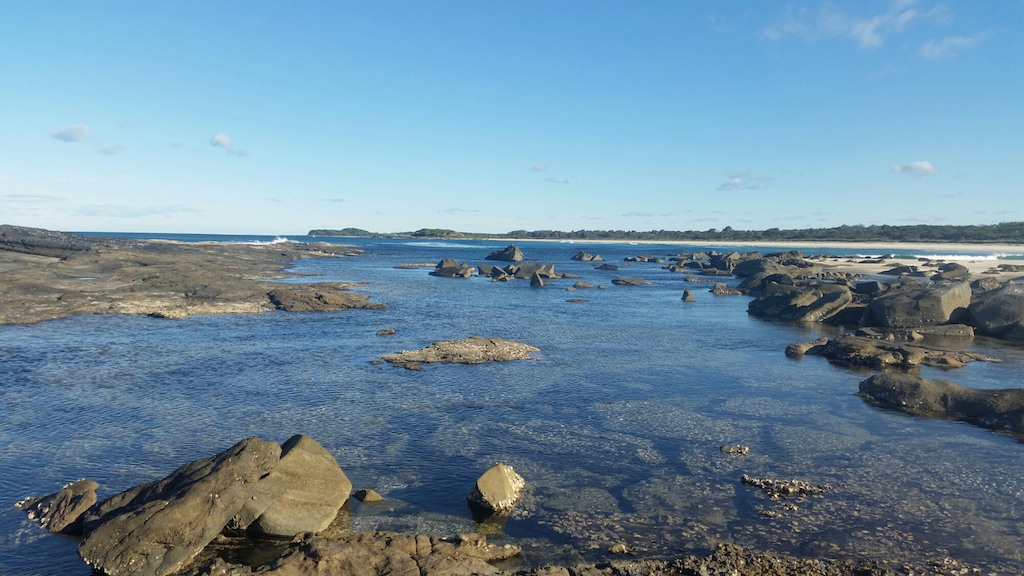 Red Rock is a quiet little village with a large nature-based caravan park located adjacent to the beach, headland and river. It’s interesting to wander around this ancient rock formation, especially the rockpools on the headland that are great to explore. 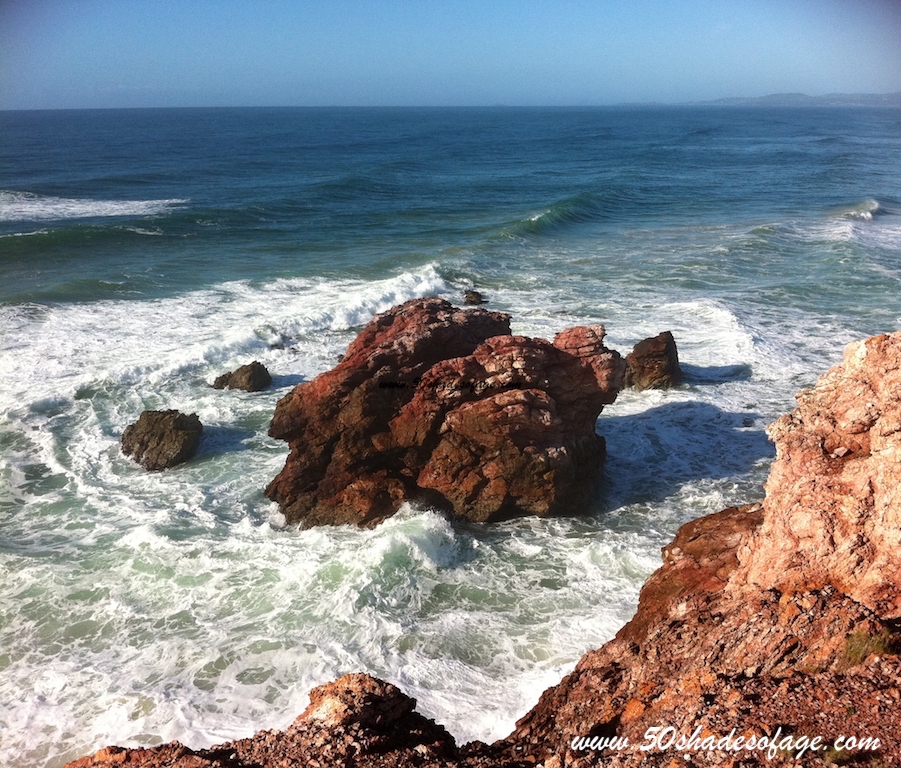 If you feel up to a walk you can stroll all the way along Corindi Beach to the next headland at Arrawarra. 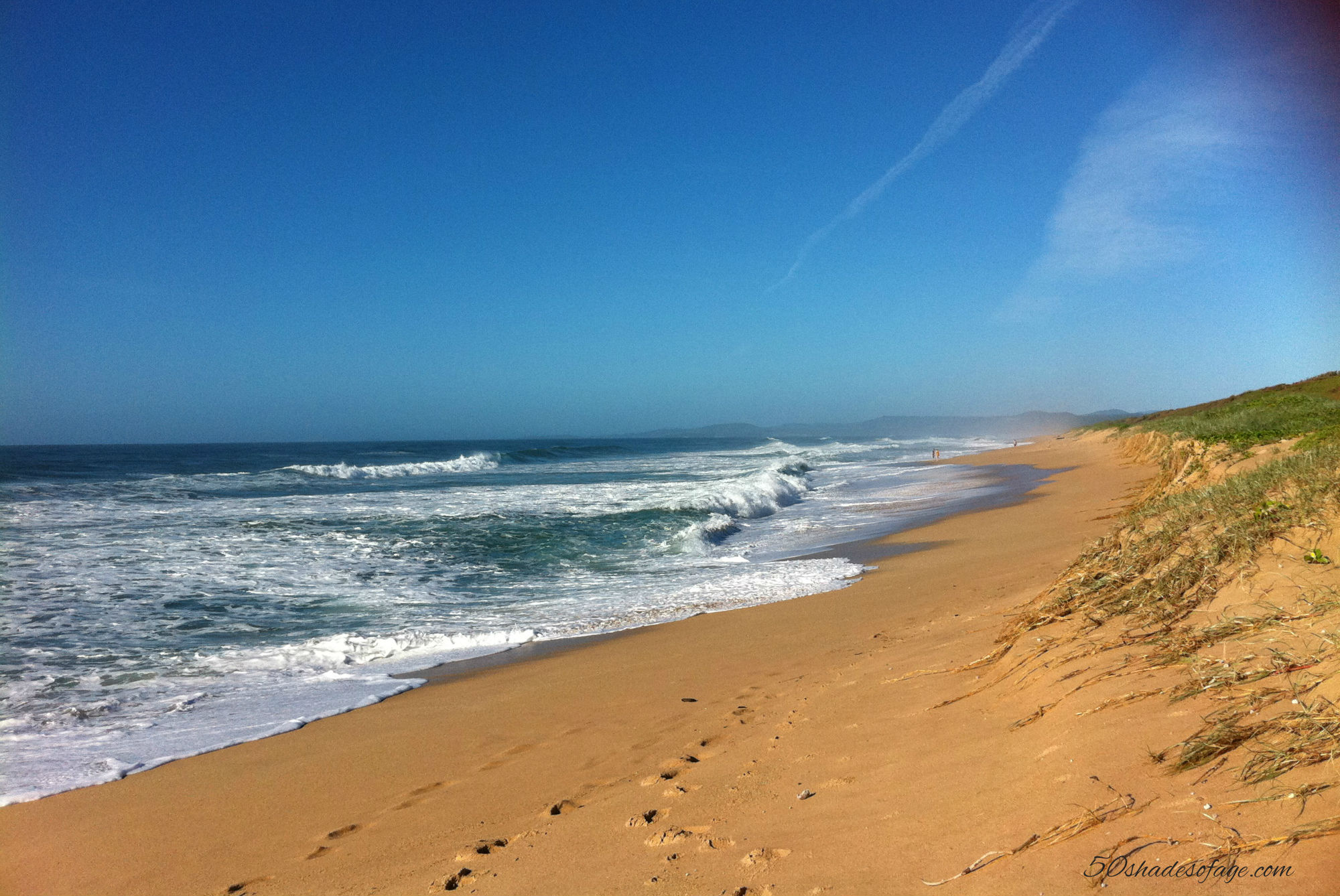 With views to die for from the headland over the Solitary Islands, Woolgoolga is 28 kms shy of Coffs Harbour. It is probably best known for the large Sikh Temple that dominates the landscape. Also known as Woopi, Woolgoolga is renowned for its swimming, surfing, fishing, whale watching, diving and snorkelling and scenic walking tracks. 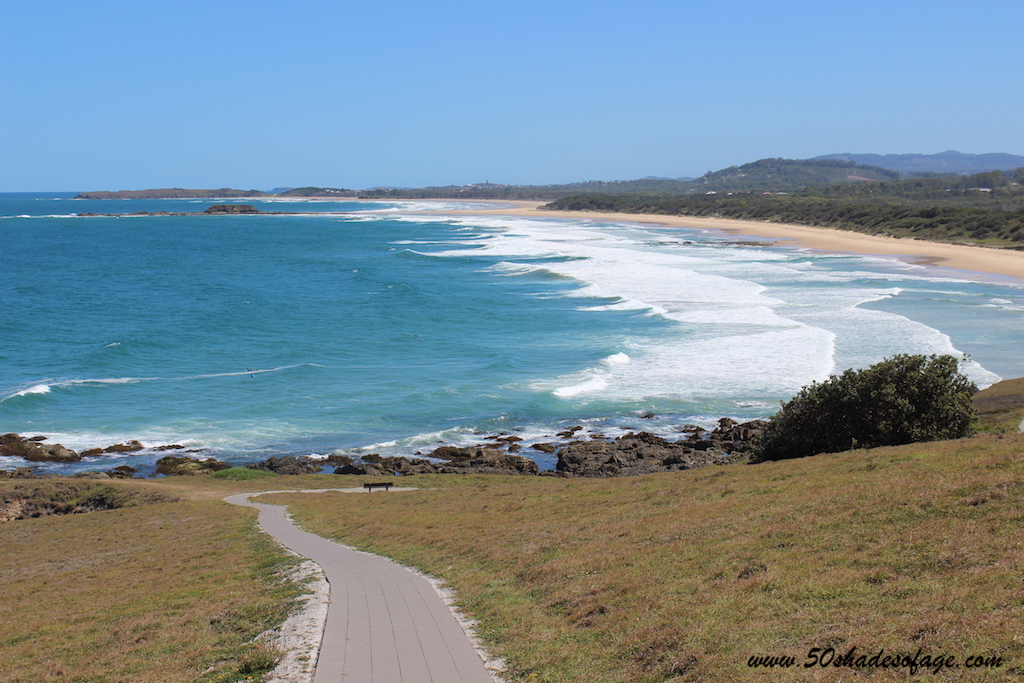 Views of Woolgoolga Beach from the headland

After a short stop here taking in the jaw-dropping coastal views, we decided to move on and we travelled to the southern side of Coffs to the town of two rivers – Urunga. At Urunga Heads the Bellinger and Kalang rivers meet and there is a great caravan park located right on Urunga Lagoon and river estuary. 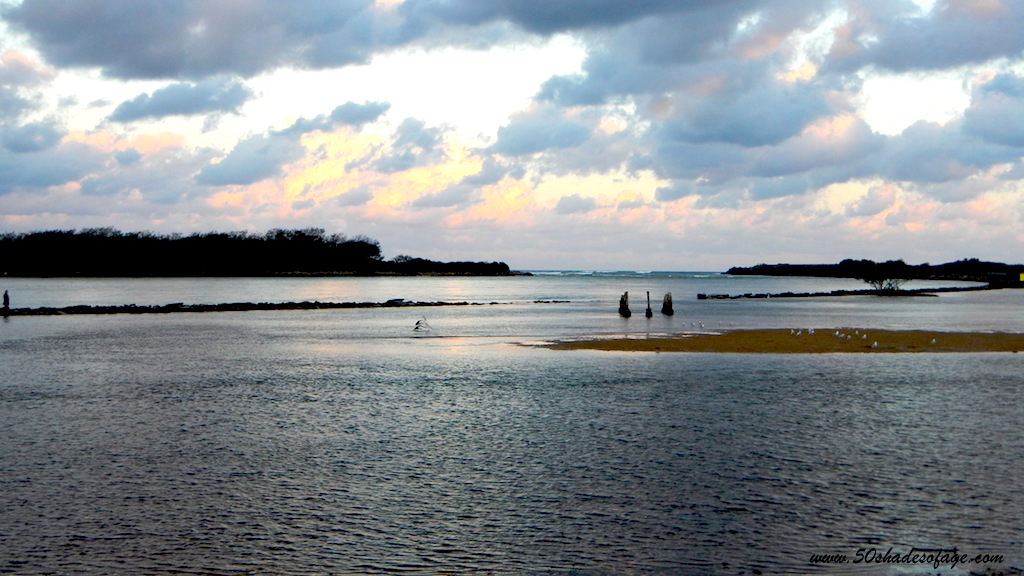 The elevated 1 Km Urunga Boardwalk is also accessible from the caravan park. It’ll take you over the Urunga Lagoon and along the estuary mouth to the edge of the Pacific Ocean and along the Kalang River in the pretty Bellinger Heads State Park to the confluence with the Bellinger River. 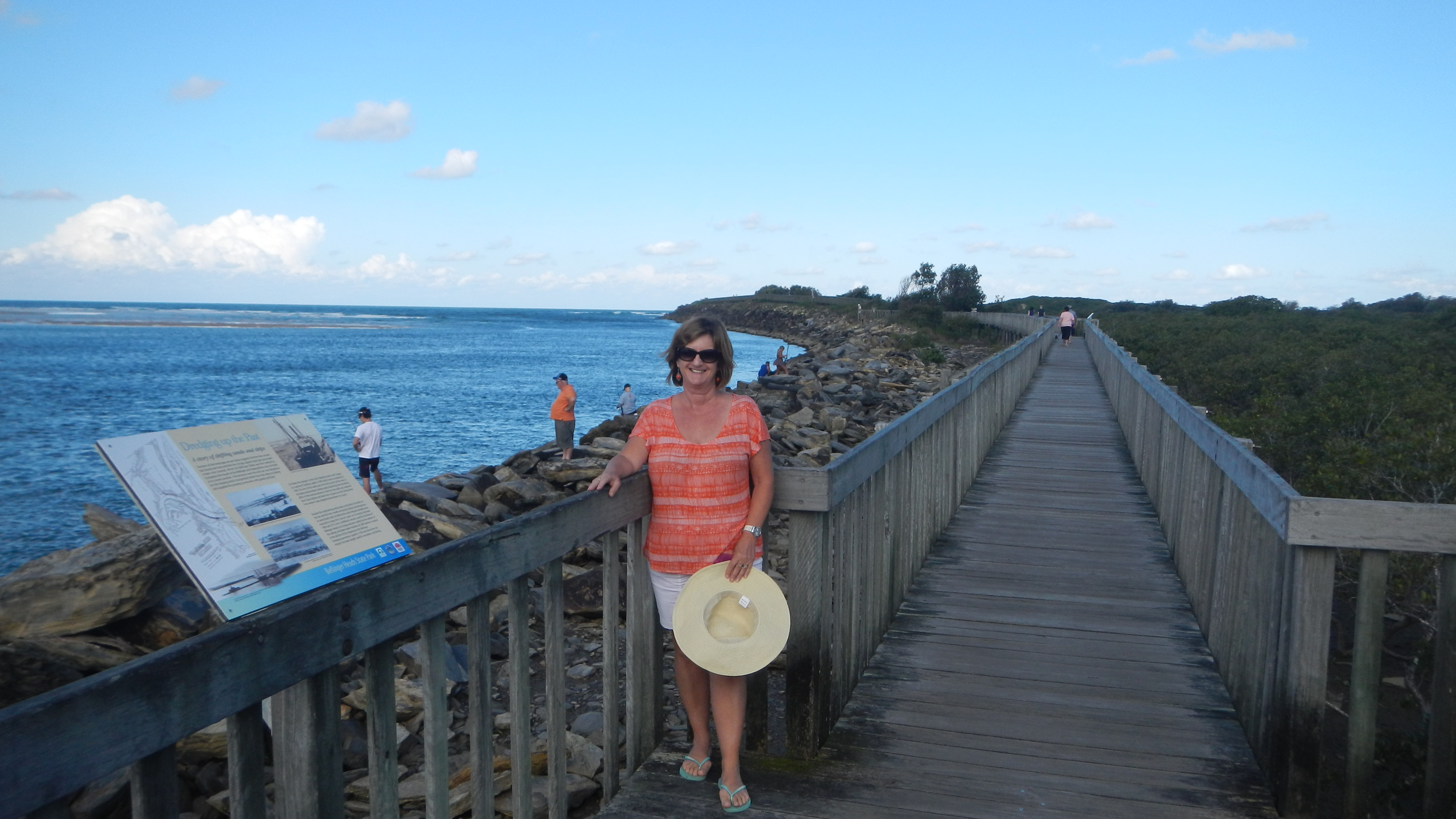 Our journey persisted to coastal spots such as Hungry Head, Wenonah Head, Nambucca Heads, Scotts Head, Grassy Head, Hats Head and finally to Crescent Head where we stayed a couple of days. A distance of 104 Kms. The area is known as the Macleay Valley Coast and is surrounded by an abundance of natural beauty including spectacular coastal national parks, endless bushwalking trails, great fishing and whale watching. 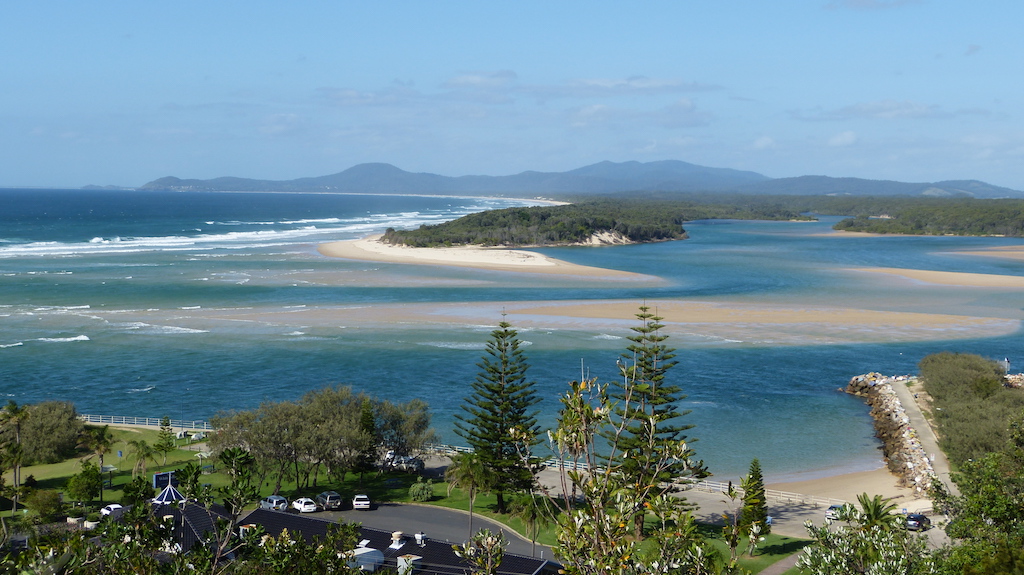 Set between a river and beach, Crescent Head is located an easy 40 minutes from Kempsey. This slice of paradise is a relaxing waterfront getaway, that is very popular with surfers and families. We stayed at the Crescent Head Holiday Park overlooking one of the most legendary right-hand surf breaks in the world. 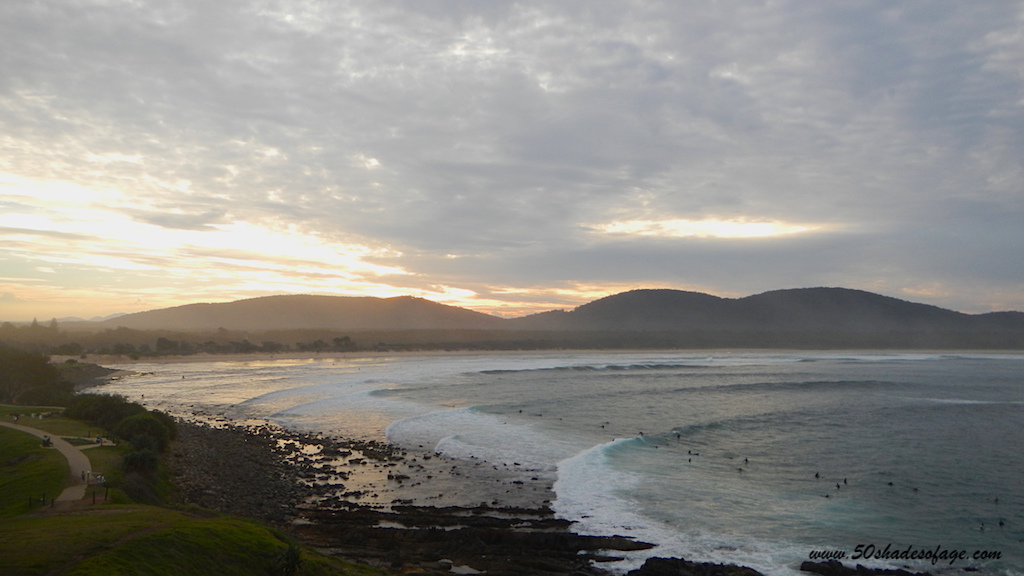 When you’ve had enough of the beaches and surf, there is a golf course located on the headland near the caravan park and plenty of scenic walking trails. 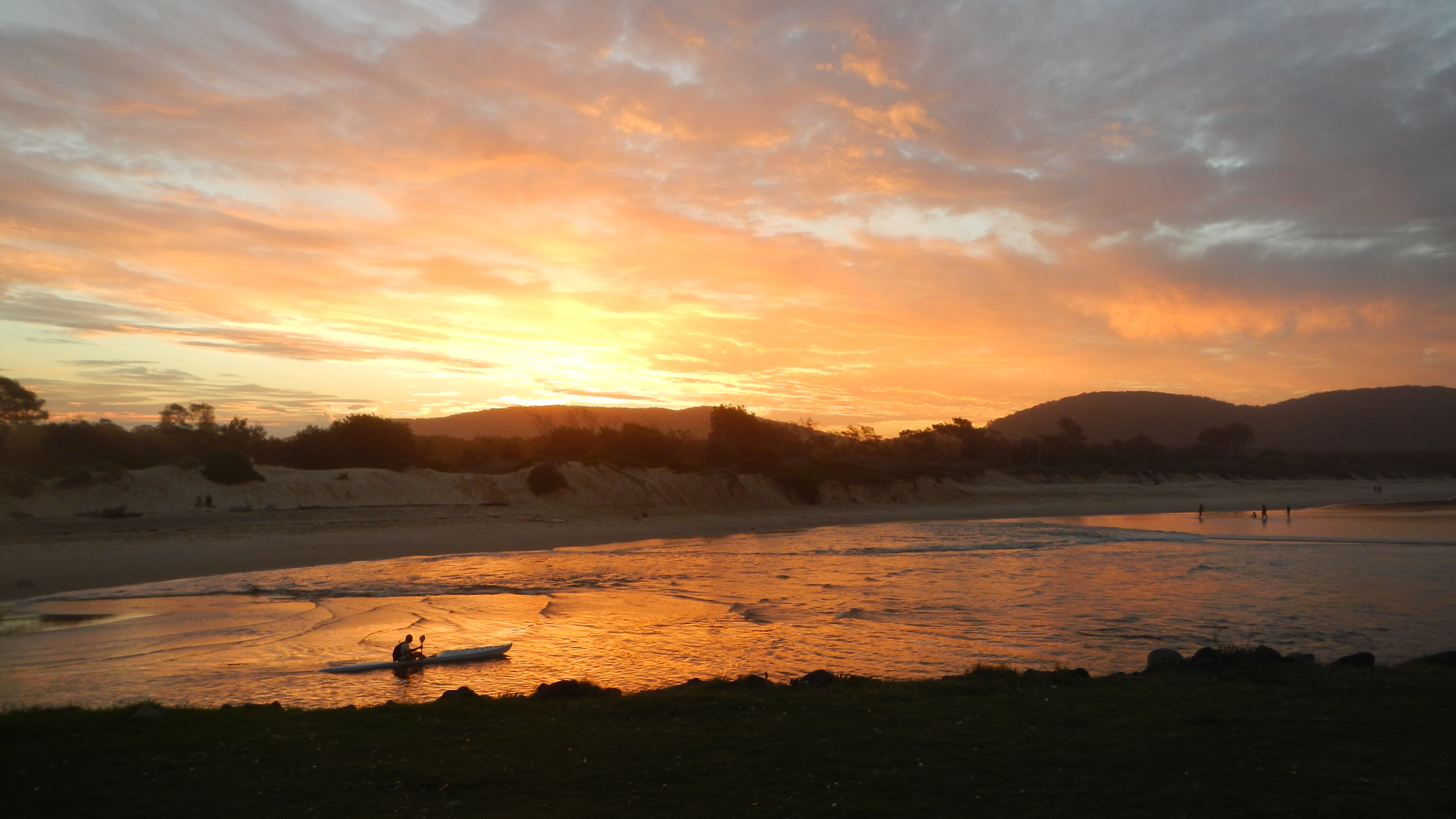 Moving on we left Crescent Head and headed towards The Great Lakes district passing Racecourse Head, Diamond Head, Nobby Head, Crowdy Head, Black Head and Red Head until we reached the twin towns of Forster-Tuncurry. Tuncurry – meaning ‘plenty of fish’ in aboriginal language was about 147 Kms south of Kempsey. 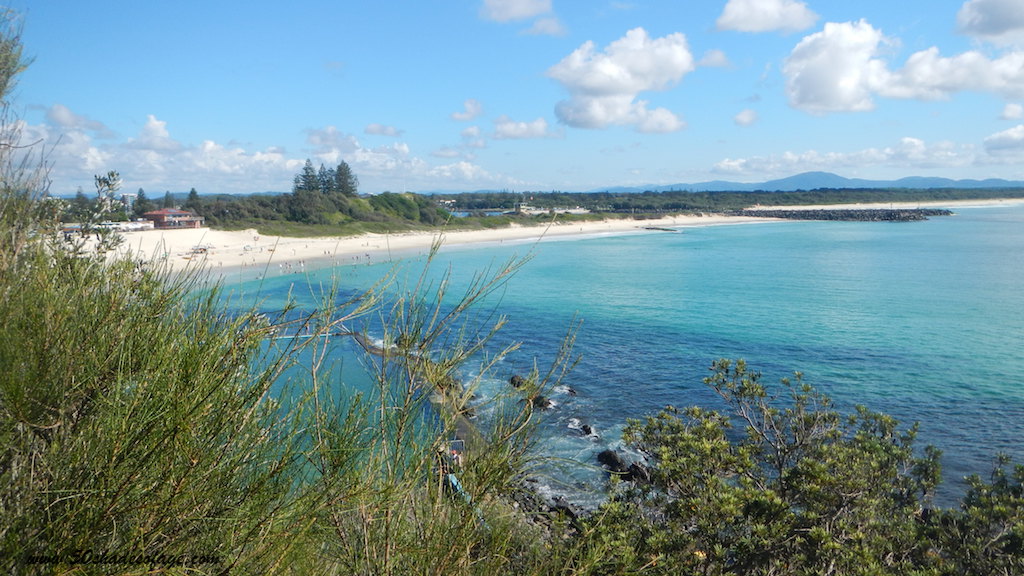 The old wooden bridge over Wallis Lake that joins the two towns together we measured to be 700 metres in length.  During our stay here we walked over the bridge many times on our morning walk and coffee expeditions. 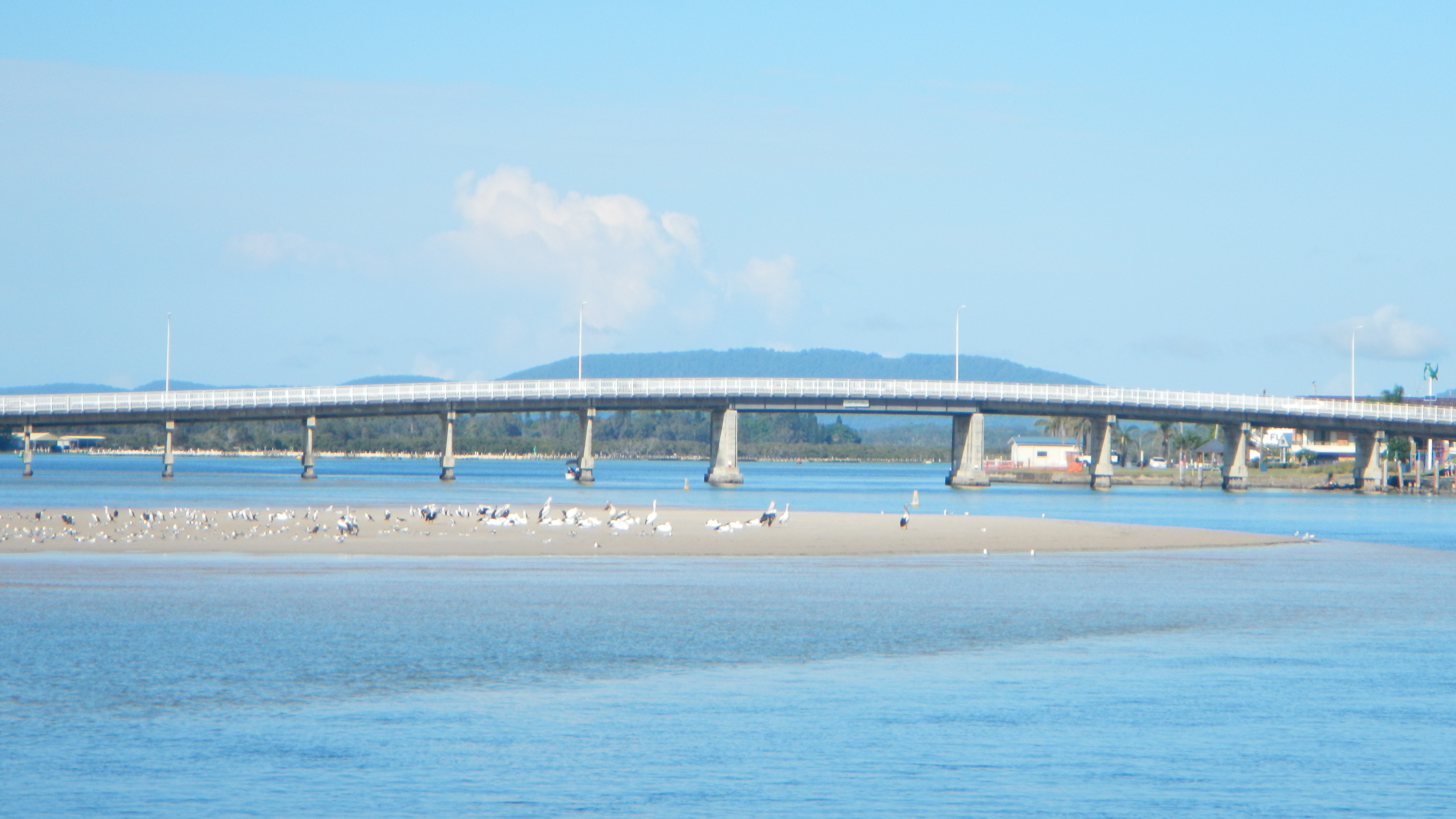 Bridge over Wallis Lake at Forster-Tuncurry

After three idyllic days at Forster-Tuncurry we drove out through the Great Lakes district past Smiths Lake and visited some beautiful pristine beaches such as Elizabeth Beach, Boomerang Beach and Blueys Beach. We drove to an out of the way coastal spot called Seal Rocks and walked up to the lighthouse perched atop a headland at Sugarloaf Point. There were magnificent views over Treachery Beach to the south and Sugarloaf Bay to the north. 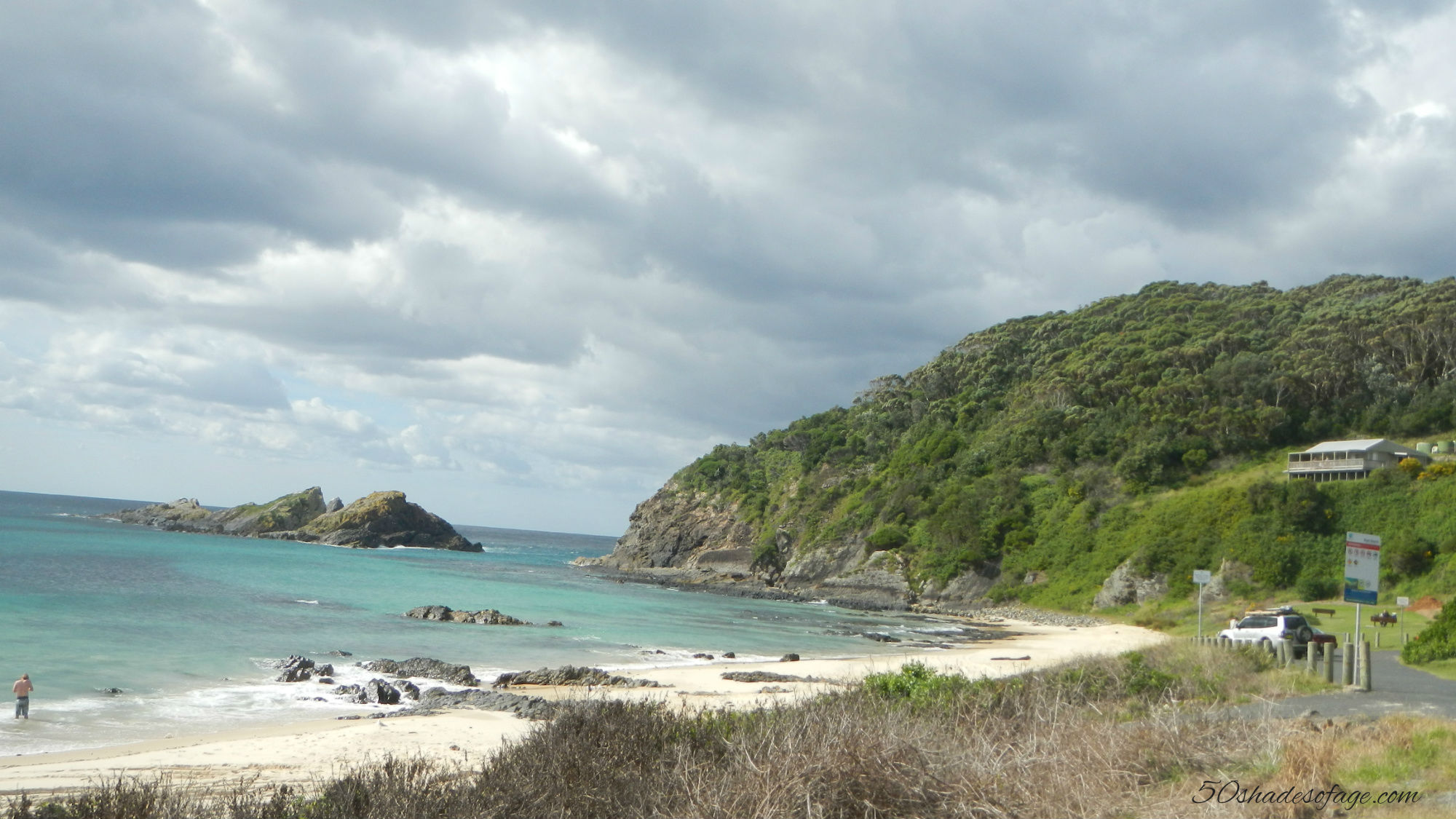 After a picturesque drive through the Buladelah State Forest with glimpses of the biggest of the Great Lakes – Myall Lake, we drove the 147 Kms out towards Port Stephens passing Charlotte Head and Yacaaba Head. We stopped here for a few days at Shoal Bay near the town of Nelson Bay. You can read more about our stay in Port Stephens HERE 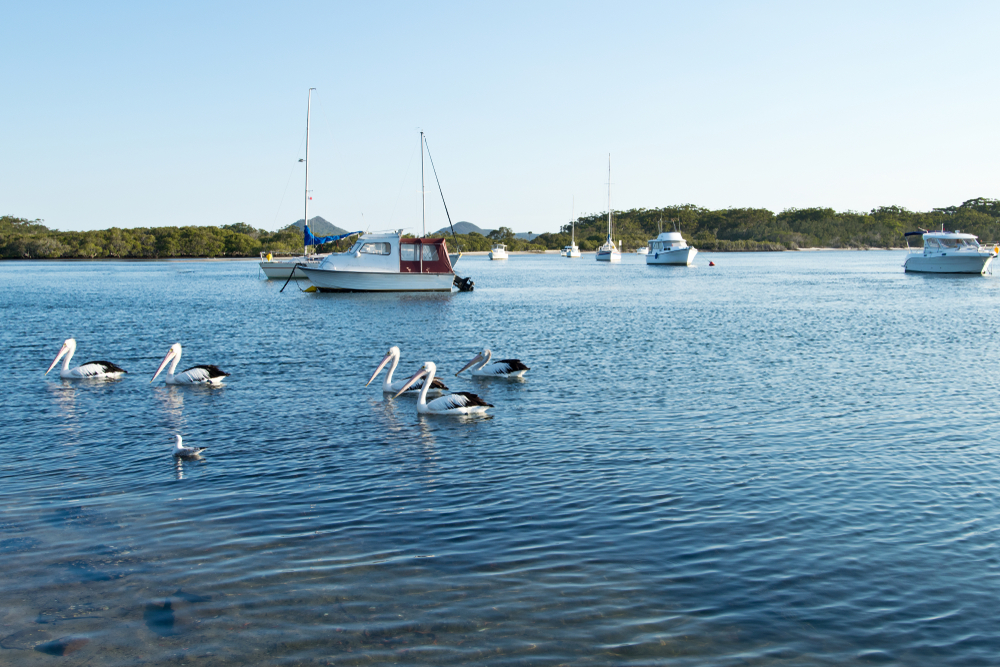 There are so many perfect little heads and headlands along the Northern New South Wales coastline that not only have great surf breaks for the surfers but also pristine beaches, river estuaries and great camping and caravan parks. It sometimes makes me wonder why we feel the need to venture outside of our magnificent country to travel abroad. Australia has so much natural beauty and untouched terrain that is ripe for the picking.

Spread the love
Beautiful BeachesNorth Coast NSWNorthern NSWNSW BeachesNSW HeadlandsTravel NSW
By 50 Shades, November 19, 2018 Kathy was a 50 something year old when she started up this blog 6 years ago, but has since turned over another decade and is now in her early 60s. She is married with two adult children and lives on the Tweed Coast of New South Wales, Australia. Kathy enjoys living life to the fullest and loves to keep fit and active by maintaining a healthy diet and exercising regularly. Some of her interests include reading, photography, travelling, cooking and blogging! Kathy works part-time as a freelance writer but her real passion is travelling and photographing brilliant destinations both within Australia and overseas and writing about it.