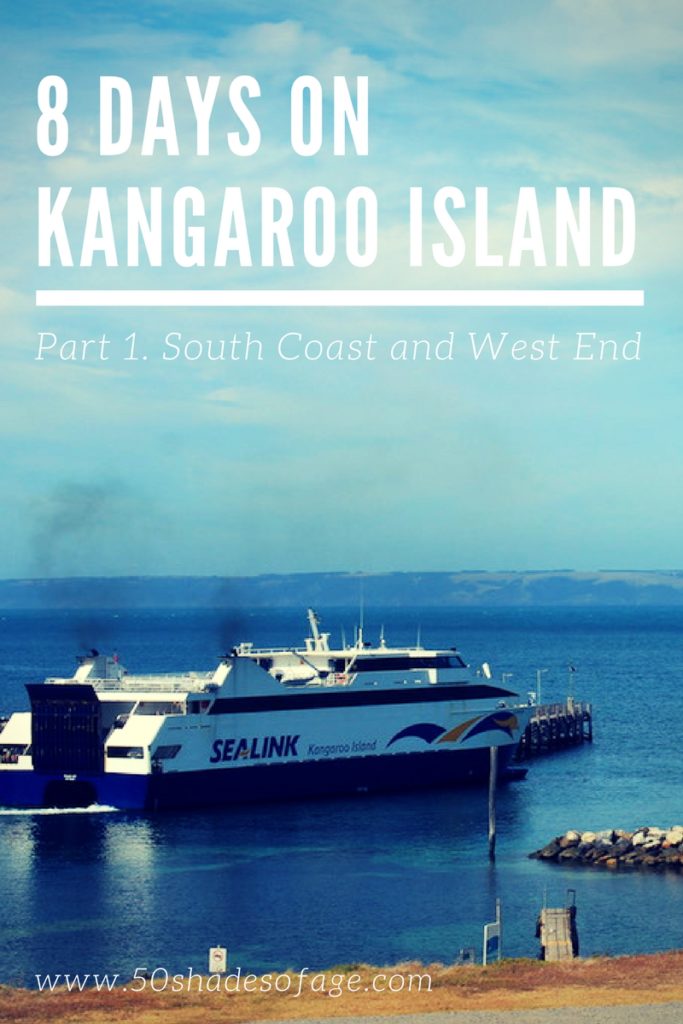 Last time we visited South Australia we deliberated about visiting Kangaroo Island and unfortunately for us we didn’t take that short ferry trip over to this incredible island. We have kicked ourselves frequently since. Words can’t describe the wildlife, the wonder and the beauty of Kangaroo Island, so come with me while I take you on a journey over an amazing 8 days on Kangaroo Island – part 1.

Kangaroo Island is off the tip of the Fleurieu Peninsula, only 107kms from Adelaide, and then a 45 minute ferry ride from Cape Jervis to Penneshaw. It is world renowned for being a sanctuary for large populations of native Australian animals, as well as being a place of beauty and absolute escape. 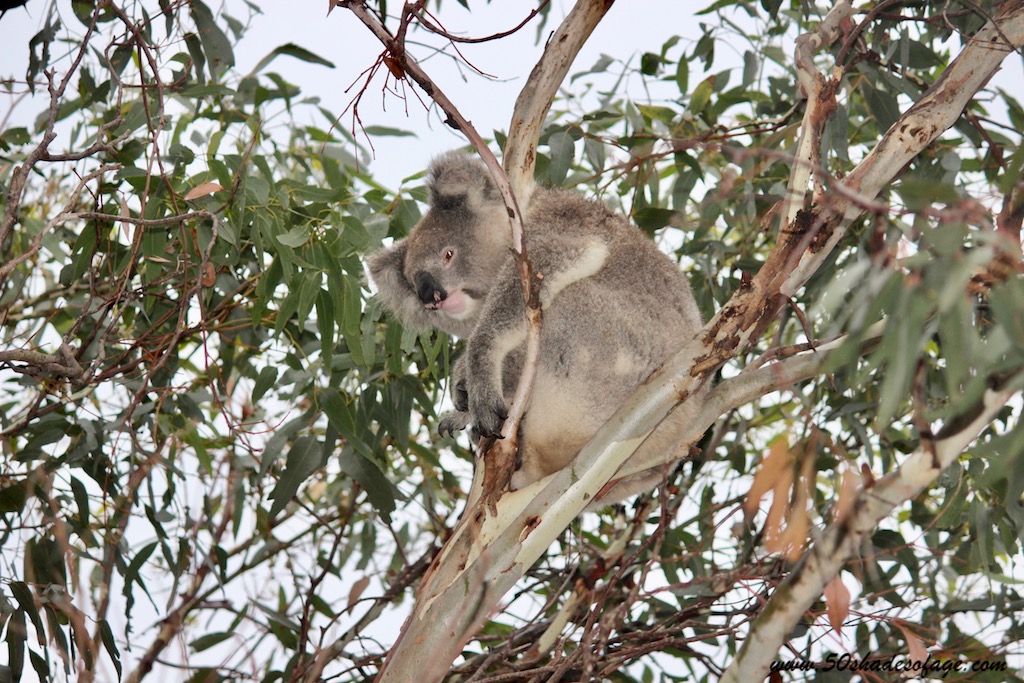 Koala in a gum tree at our campground at Vivonne Bay

The island can be roughly divided up into 7 regions: West End, South Coast, Parndana & Districts, North Coast, Kingscote & Districts, American River and Penneshaw & Dudley Peninsula. During our stay we managed to see most of the island, except for the very remote Cape Borda at the West End and Cape Gantheaume on the South Coast.

We drove our 4WD and caravan aboard the vehicular ferry and crossed the Southern Ocean excited about our next adventure. Once we disembarked from the ferry we decided to make a beeline to Vivonne Bay on the south coast of the island. The road was sealed the entire way until we reached the turn off to Vivonne Bay and then it was dirt for a few kilometres to the camping area ideally located near the beach and the Harrier River. 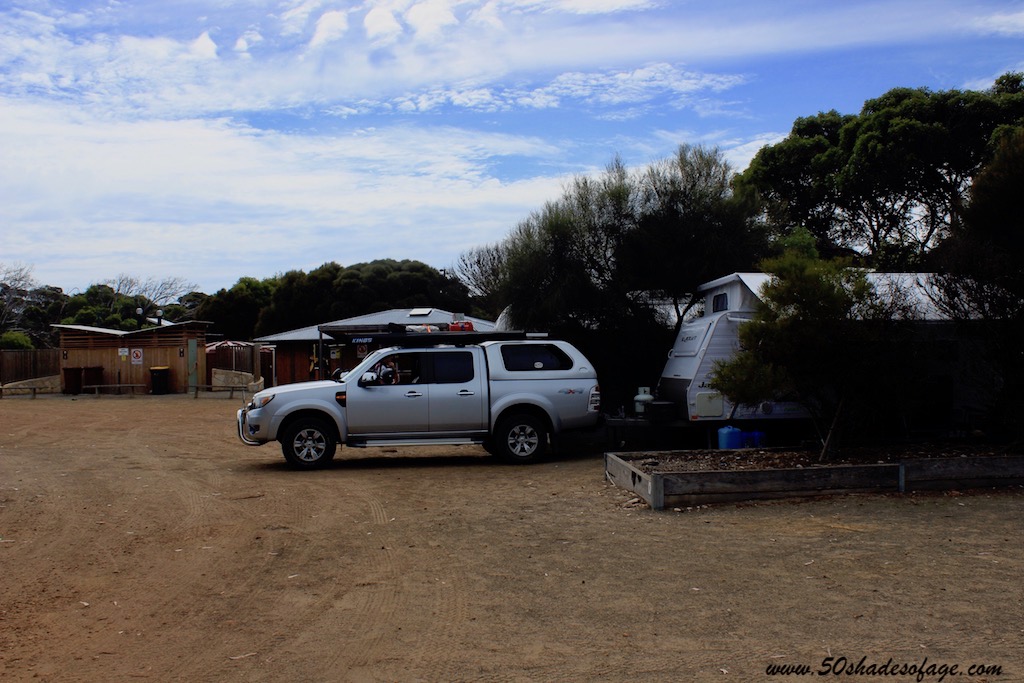 The Vivonne Bay campground is one of the 10 Kangaroo Island Council managed facilities, each with their own unique features. There are fees applicable at each campground via a DIY parking meter and they are available on a first in, first served basis. Vivonne Bay offers large powered or unpowered sites, a camp kitchen, drop toilets, hot showers (costing $2 per shower), BBQ and is a short walking distance to the beach and river. 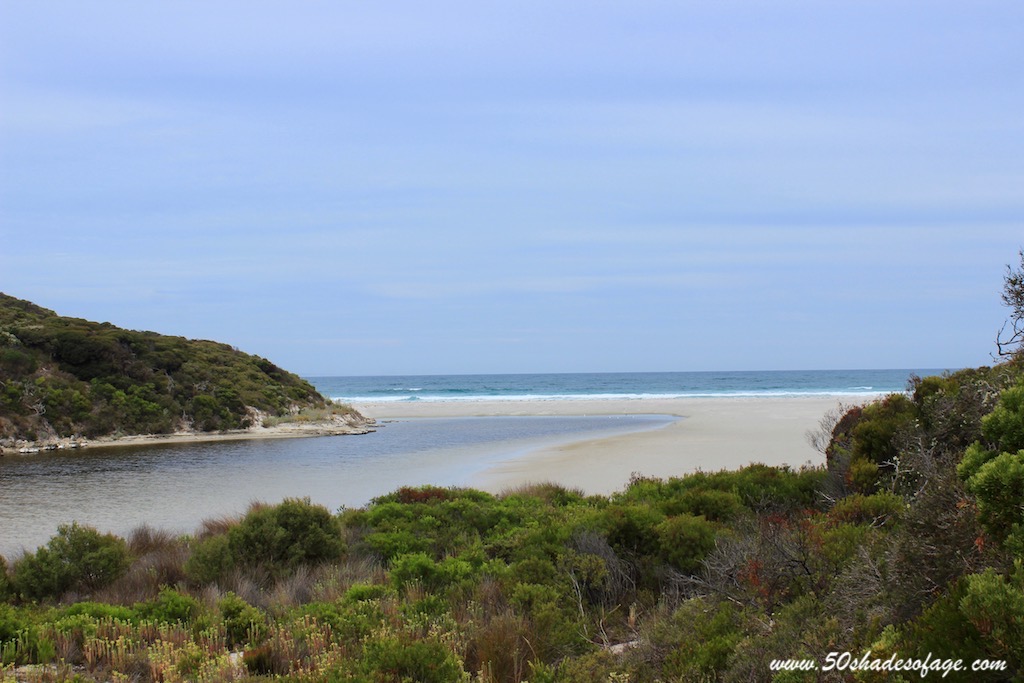 We paid for a 3 night stay and although the weather was a little wet it was still warm. Donning our raincoats we set off for a long beach walk along Vivonne Bay, once voted Australia’s best beach, and we were amazed at the snow white sand and pristine aqua blue waters. There was barely another person in sight and we felt as though we had this long stretch of beach almost to ourselves. 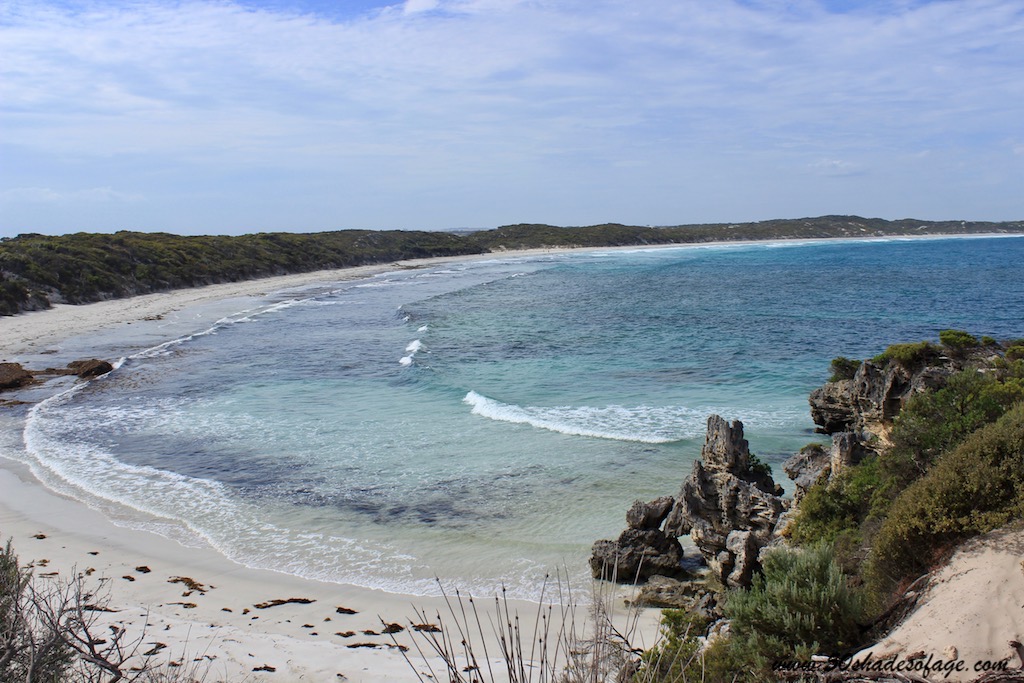 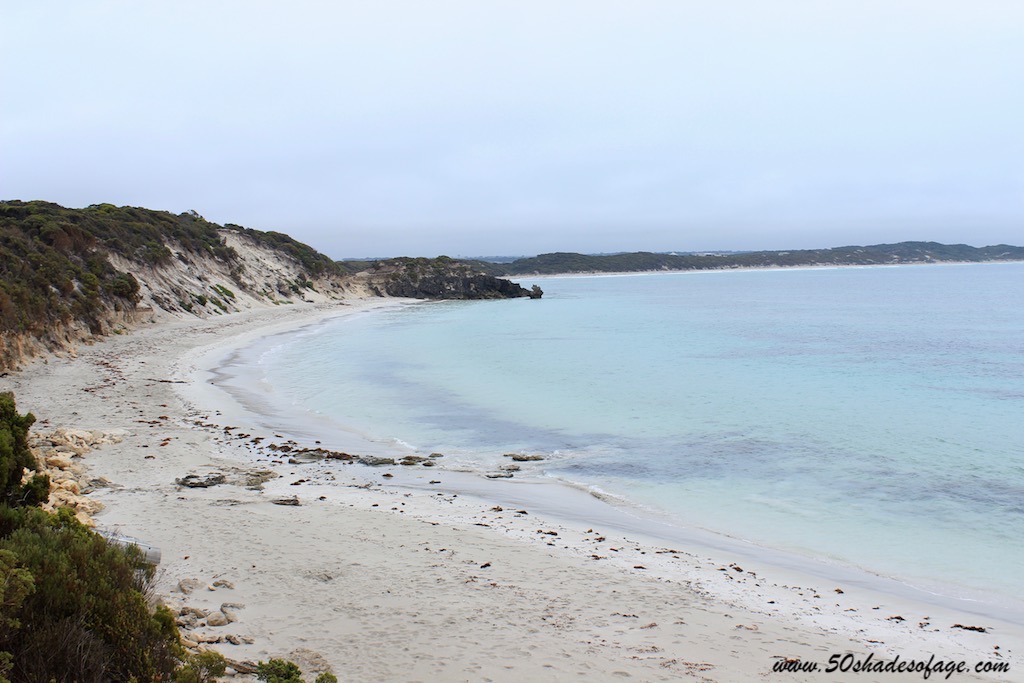 My husband tried fishing off the Vivonne Bay jetty and noticed sea lions swimming under the pier obviously hunting for fresh fish. There were a few fishing boats moored just off the pier in the calm waters of the bay. 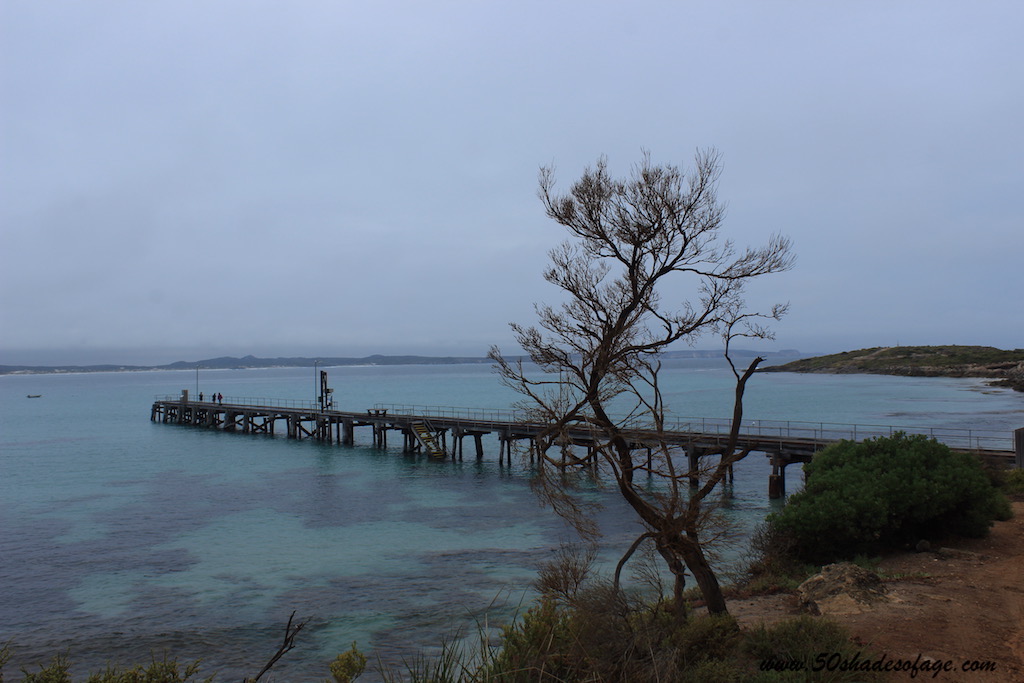 Further around from the jetty is Vivonne Bay Conservation Park and Cape Kersaint. We hiked out to the cape through colourful coastal vegetation to some interesting rock formations. The views from the cape were breathtaking. 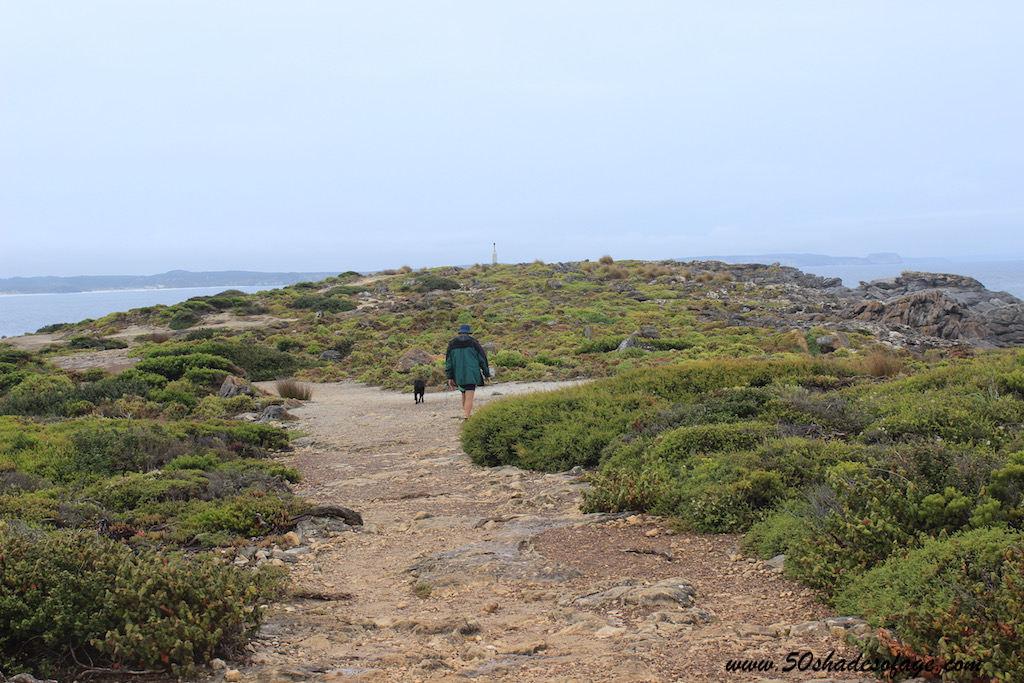 Path down to Cape Kersaint

The following day we visited the nearby Seal Bay Visitor Centre, the third largest Australian seal colony. We paid our admission to walk down the extensive boardwalks with interpretive signage along the way regarding the sea lions that live here on the beach. 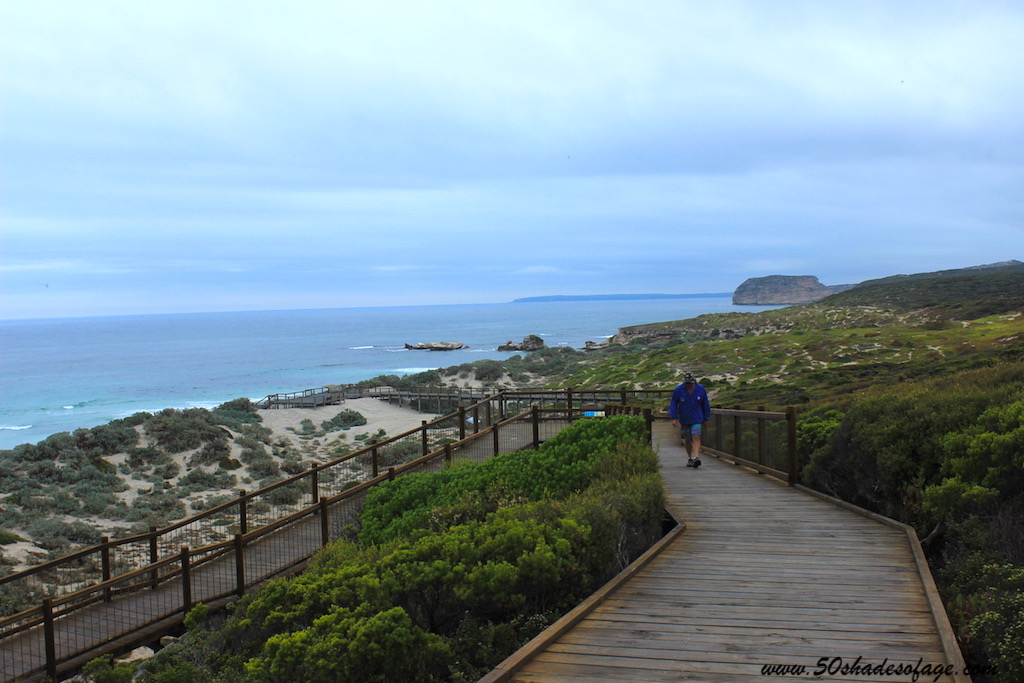 We captured incredible views of the extraordinary coastline and sea lion colony, walked through an untouched dune system, and onto a pristine sandy beach. We were given an unique insight into how these endangered animals fish, surf, rest, interact with their pups and defend their territory. It was such a superb experience. 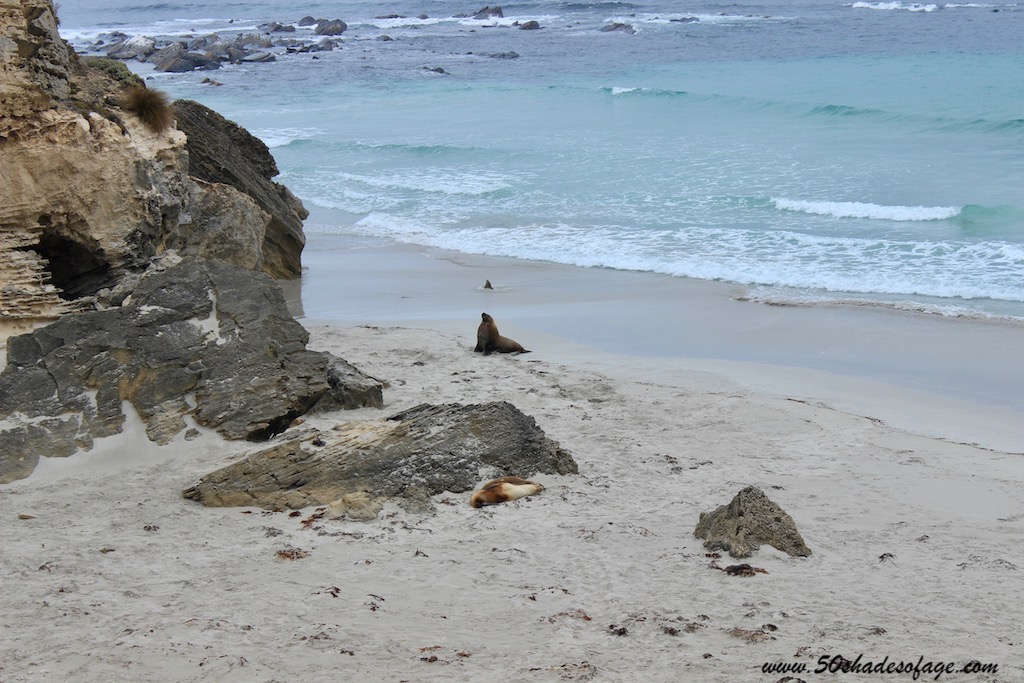 The West End of the island is pretty much taken up by the immense Flinders Chase National Park. This rugged and naturally beautiful landscape contains some of the most iconic natural attractions, such as Remarkable Rocks and Admirals Arch. 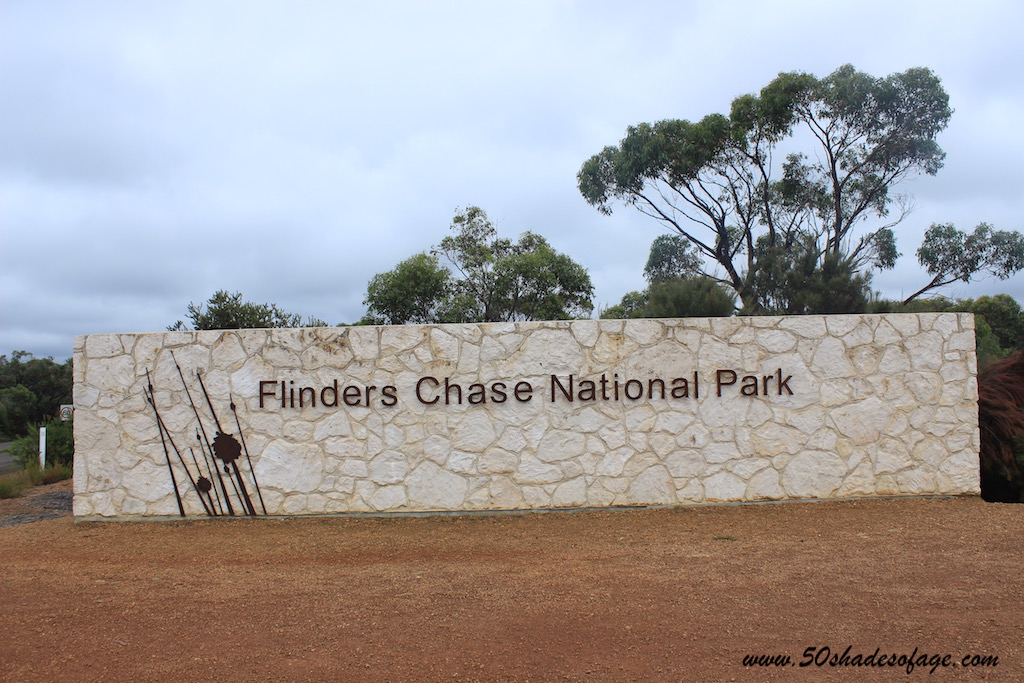 Flinders Chase National Park sign at the entrance to the park

We set off here early one morning from Vivonne Bay, to try and beat the bus tour groups, stopping to get our day pass and map from the National Park’s Office. We immediately spied a Koala scampering up a gum tree and stopped to try to get a photo. The day was warm and as we drove deeper into the National Park there was a fog hanging over the landscape making visibility very difficult. 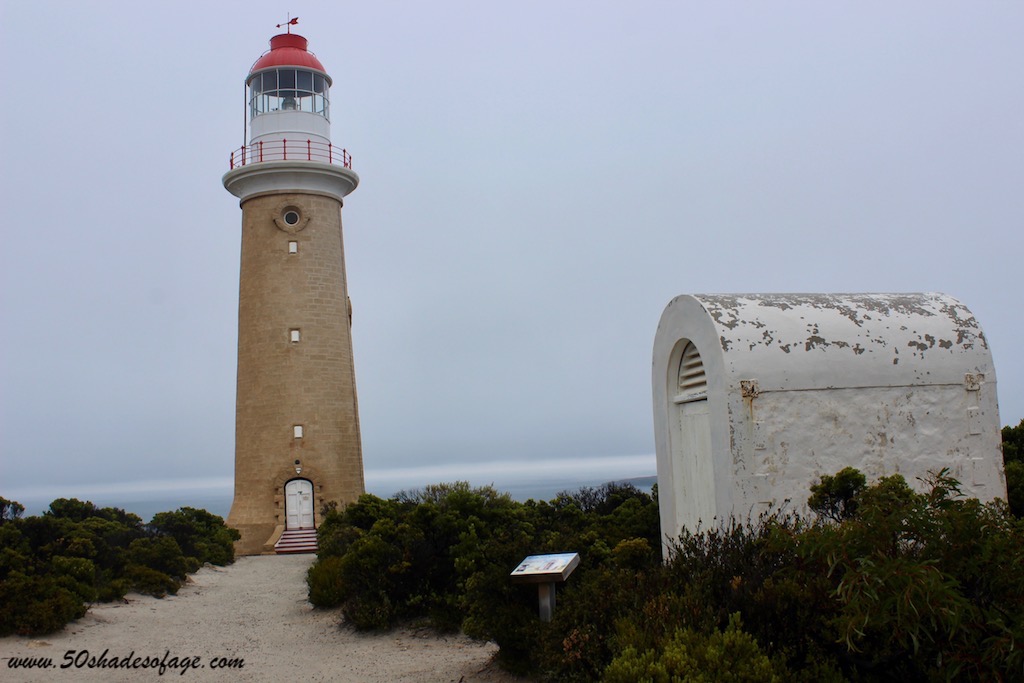 After a very slow drive through the undulating, heavily vegetated terrain, we arrived at Cape du Couedic and parked near the tall white lighthouse perched on the highest point of the cape. Visibility was still a problem and as we walked from the lighthouse down the walkway to a lookout there was an eerie feel in the air. 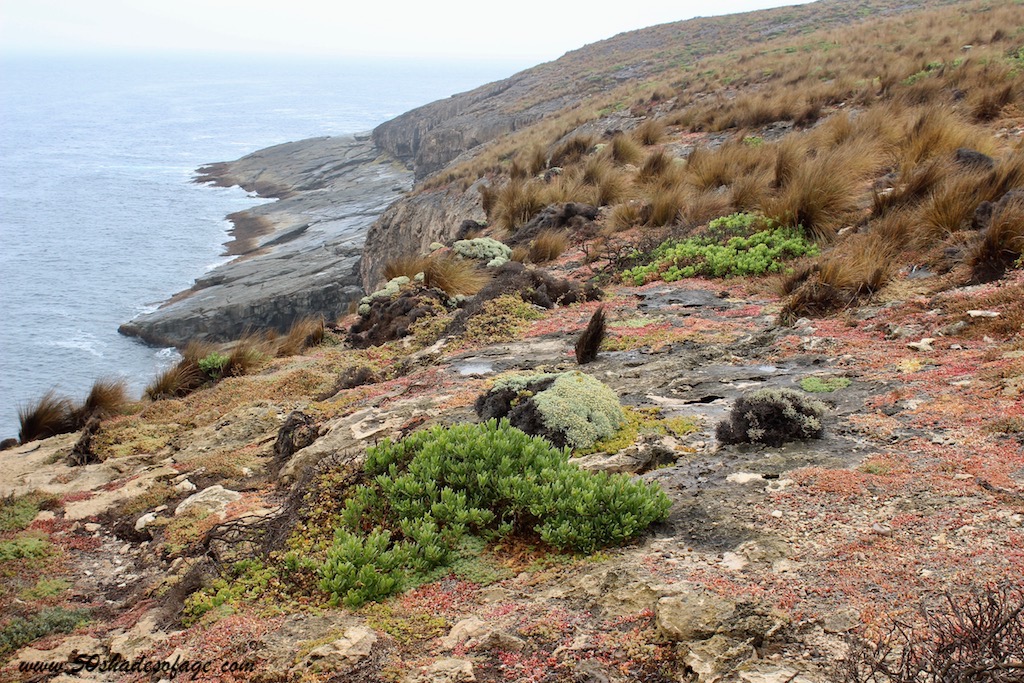 However once we reached the lookout the fog seemed to clear affording us panoramic views of the coastline, Admirals Arch, the rock formations beneath and a large colony of Long-Nosed Fur Seals sleeping and playing on the rocks. 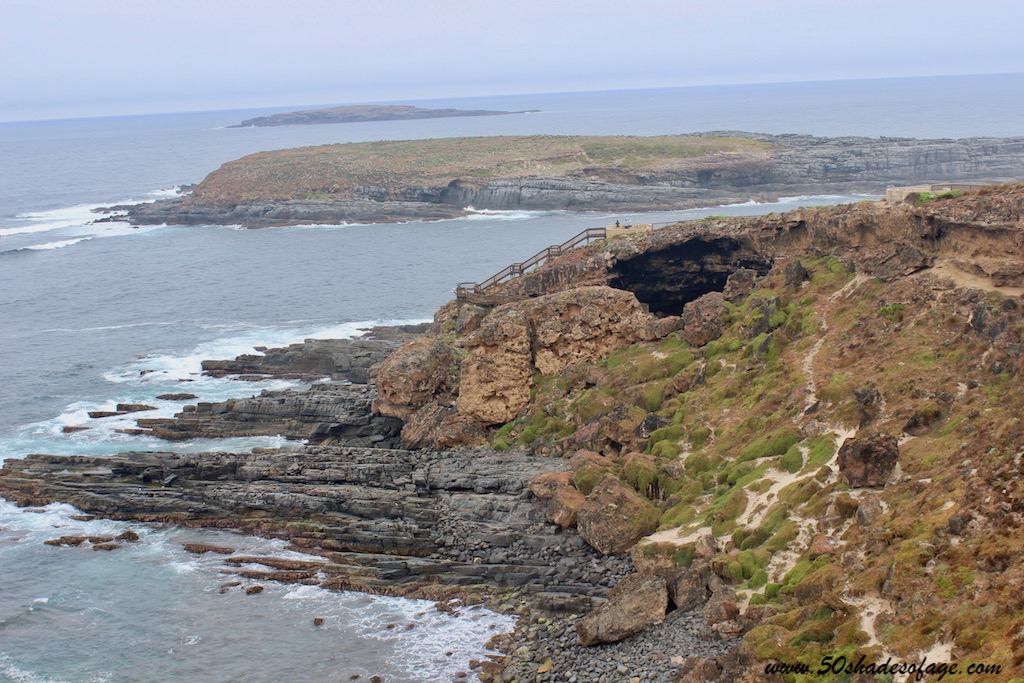 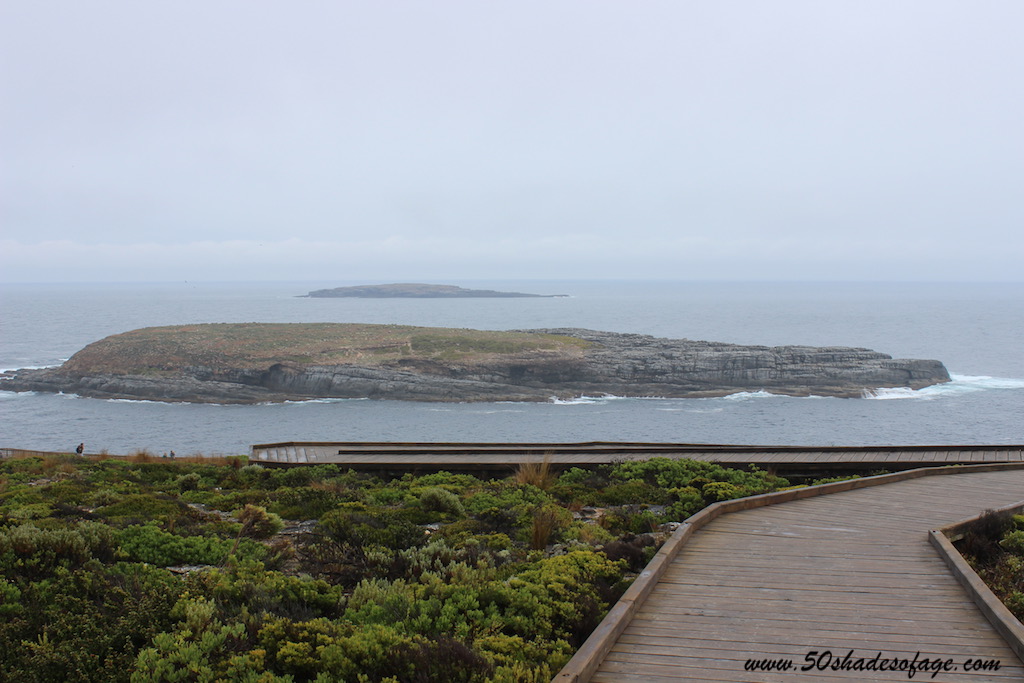 Boardwalk down to Admirals Arch

We strolled towards the boardwalk that spirals down to several viewing platforms and then eventually down some stairs to the incredible Admirals Arch. This arch was sculpted by the wind and sea and is a popular photo opportunity for tourists and seemingly seals as well! 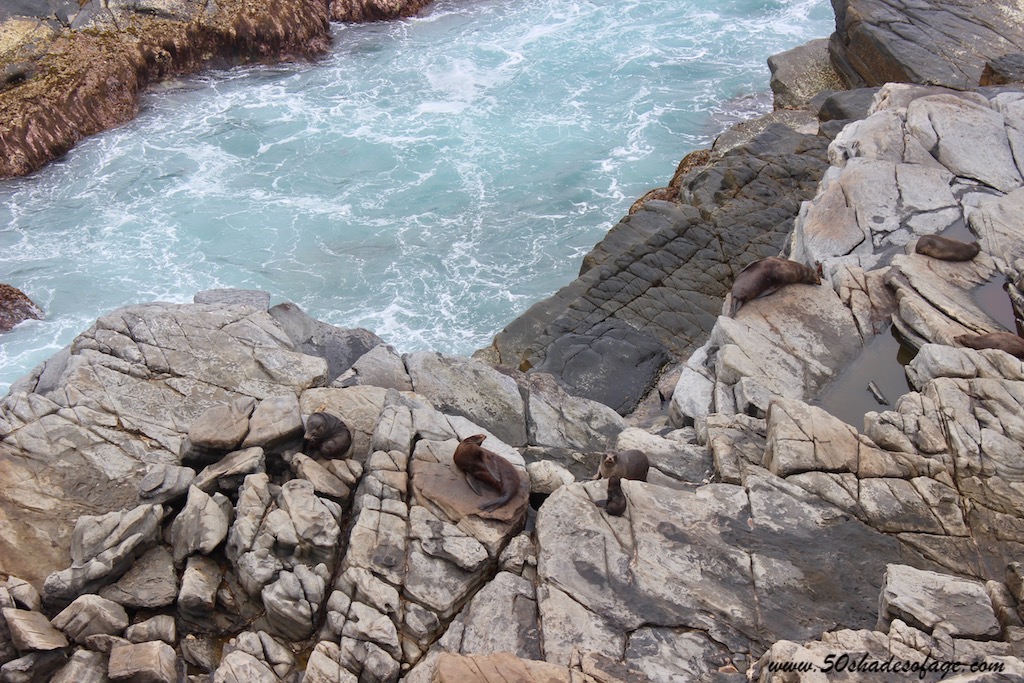 Long-Nosed Fur Seals on the rocks at Cape du Couedic 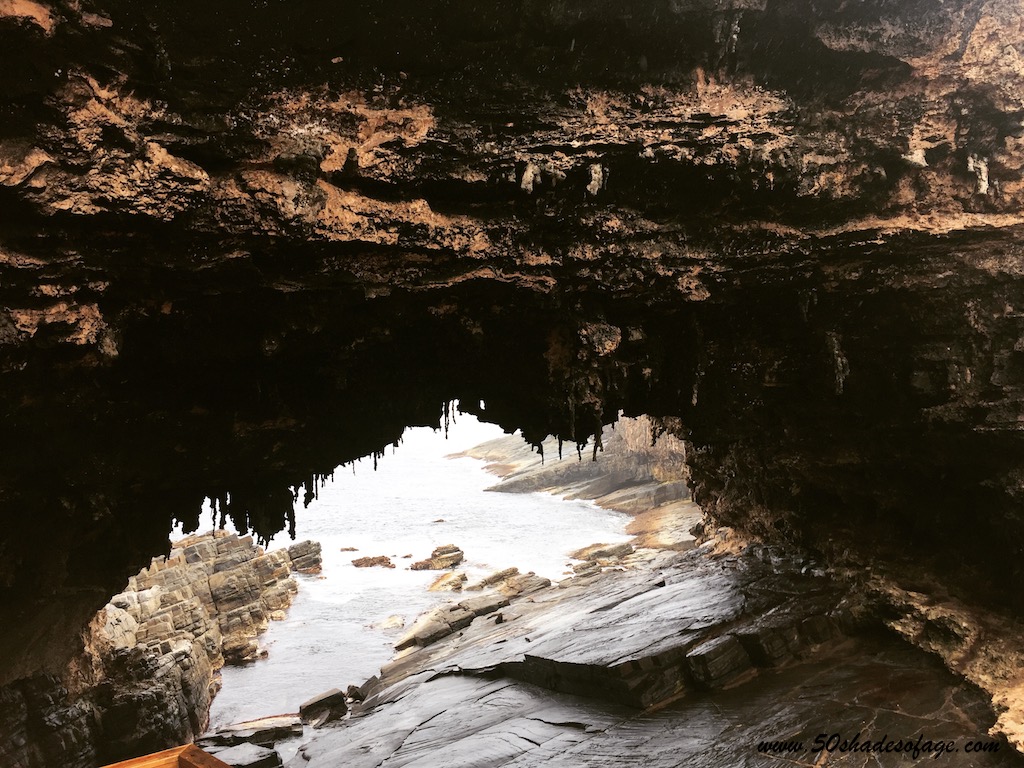 A short 10 minute drive away are the Remarkable Rocks. These bizarre huge granite boulders are perched precariously on the edge of the ocean and have been windswept into shapes over a period of 500 million years. There is a boardwalk down to a viewing platform overlooking the rocks, but otherwise you can walk around and through the rocks for a closer look. 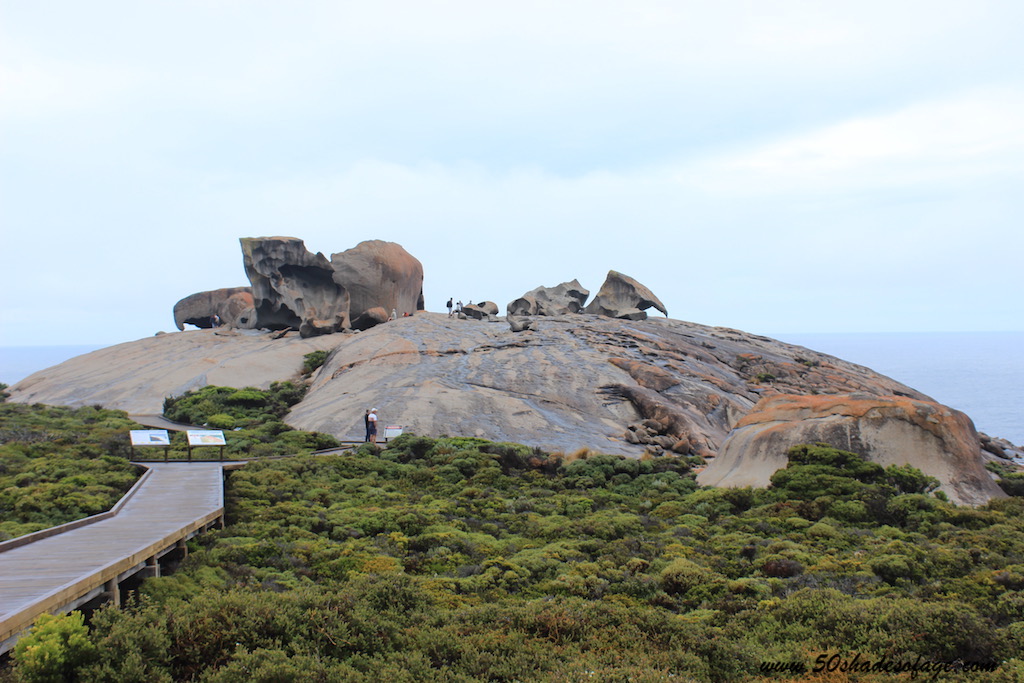 Boardwalk down to Remarkable Rocks 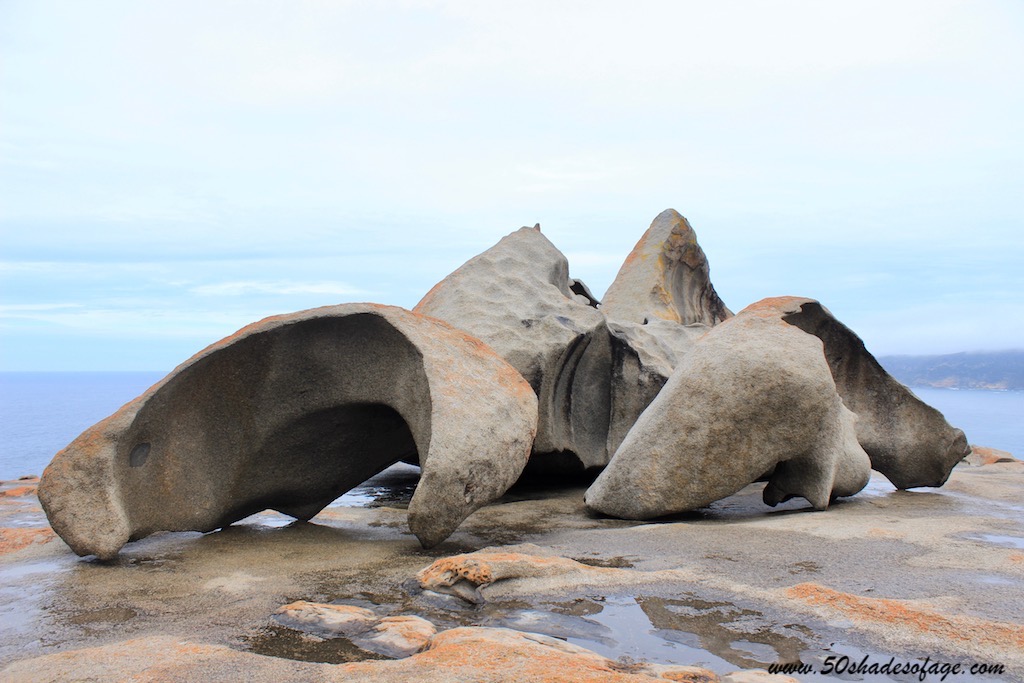 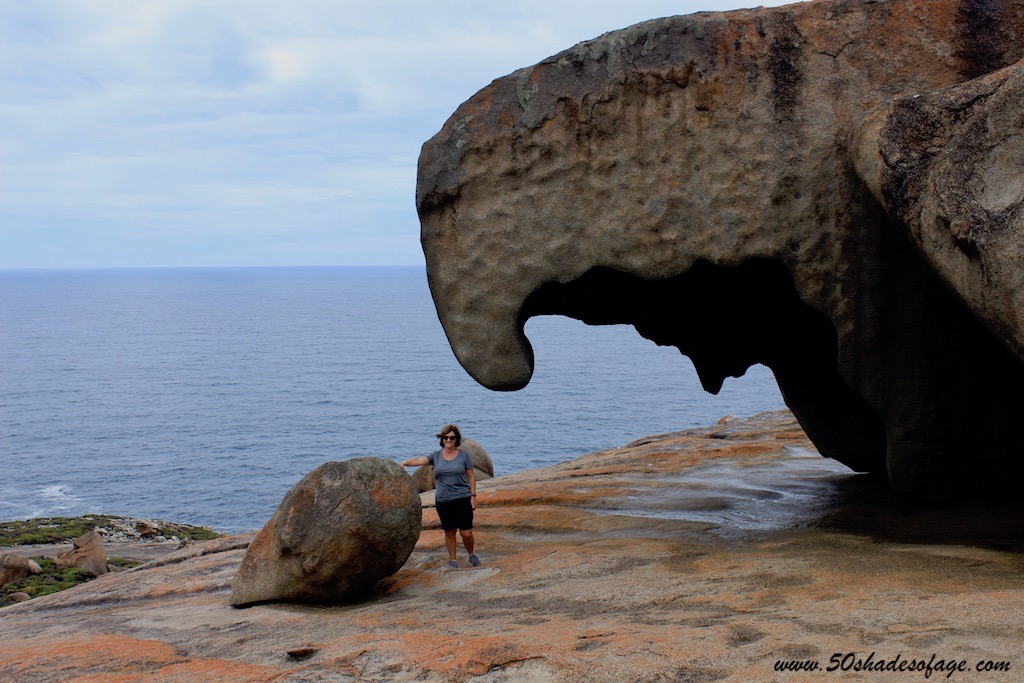 Other points of interest in Flinders Chase National park are Cape Borda Lighthouse, Hanson Bay Wildlife Sanctuary and Kelly Hill Conservation Park. Plus the West End offers a diverse range of hiking and walking trails. There are camping grounds littered throughout the park, or you can camp at the Western KI Caravan Park just outside the National Park. 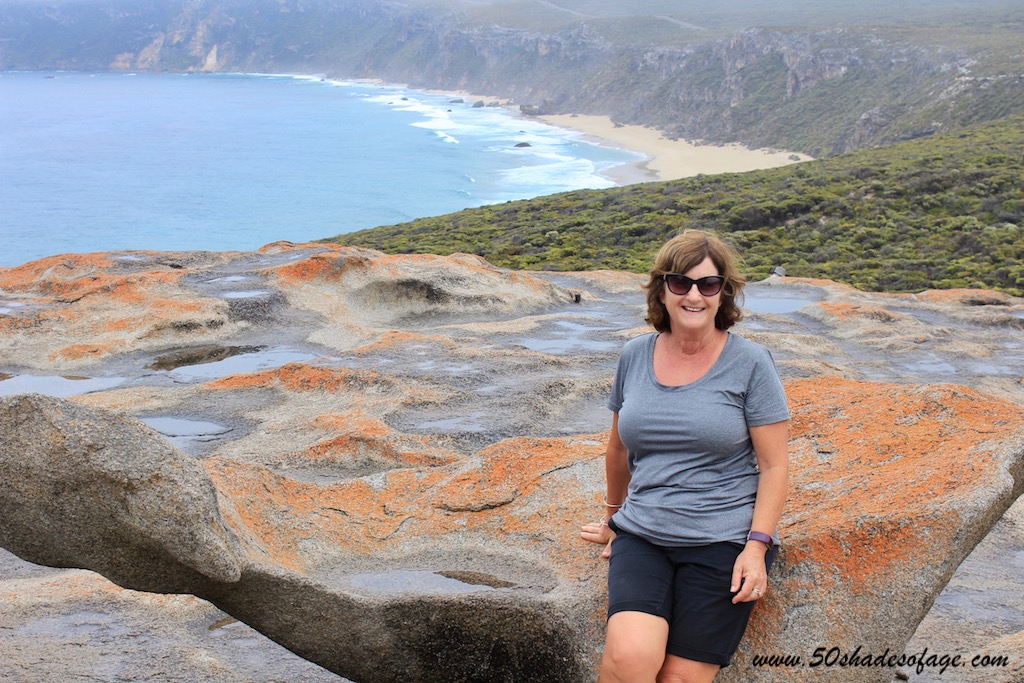 Our first three days on Kangaroo Island were incredible. We saw so much wildlife, pristine wilderness, rugged coastline and then in complete contrast, tranquil white sand-fringed bays. Kangaroo Island was already exceeding my expectations and there was yet more to come! Stay tuned for part 2 the North Coast and Kingscote.

Spread the love
Flinders Chase National ParkKangaroo IslandTravel South AustraliaVivonne Bay
By 50 Shades, April 9, 2018 Kathy was a 50 something year old when she started up this blog 6 years ago, but has since turned over another decade and is now in her early 60s. She is married with two adult children and lives on the Tweed Coast of New South Wales, Australia. Kathy enjoys living life to the fullest and loves to keep fit and active by maintaining a healthy diet and exercising regularly. Some of her interests include reading, photography, travelling, cooking and blogging! Kathy works part-time as a freelance writer but her real passion is travelling and photographing brilliant destinations both within Australia and overseas and writing about it.