Tracing The Murray River From Renmark to Swan Reach 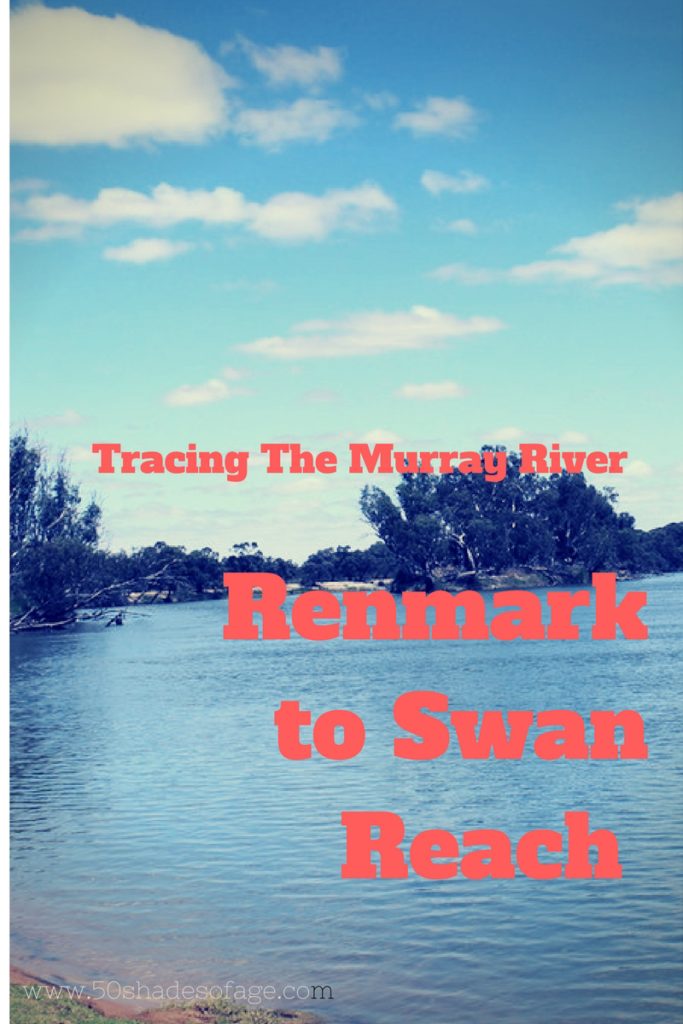 We reached Renmark mid afternoon, after spending the morning in Wentworth and then stopping for lunch at Lake Cullulleraine en-route. I remember passing through Renmark when I was a kid and being impressed with this Riverland town. It is renowned for being the state gateway to South Australia and is the oldest Irrigation Settlement in Australia. 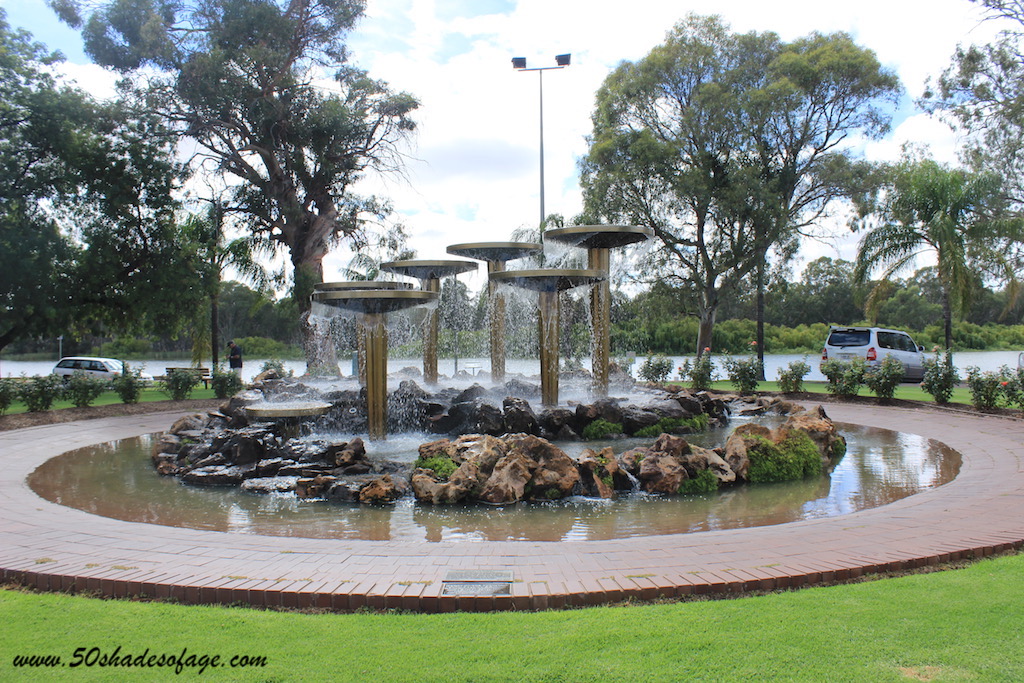 The region has a thriving horticulture and viticulture (grape growing) industry and as you drive around you can’t help but notice the abundance of orchards, market gardens and vineyards. 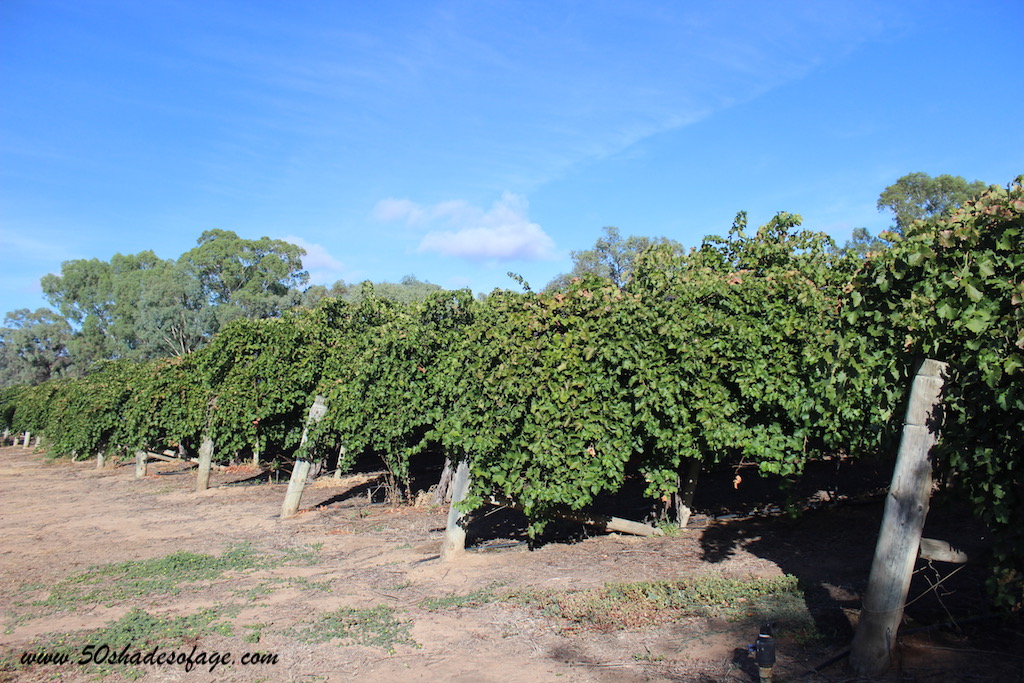 With the help of WikiCamps we found a free camping spot right on the Murray River at Plush’s Bend just on the outskirts of Renmark town. We pulled in, found a site alongside the river and setup for the night and were amongst the very few caravanners for the night. 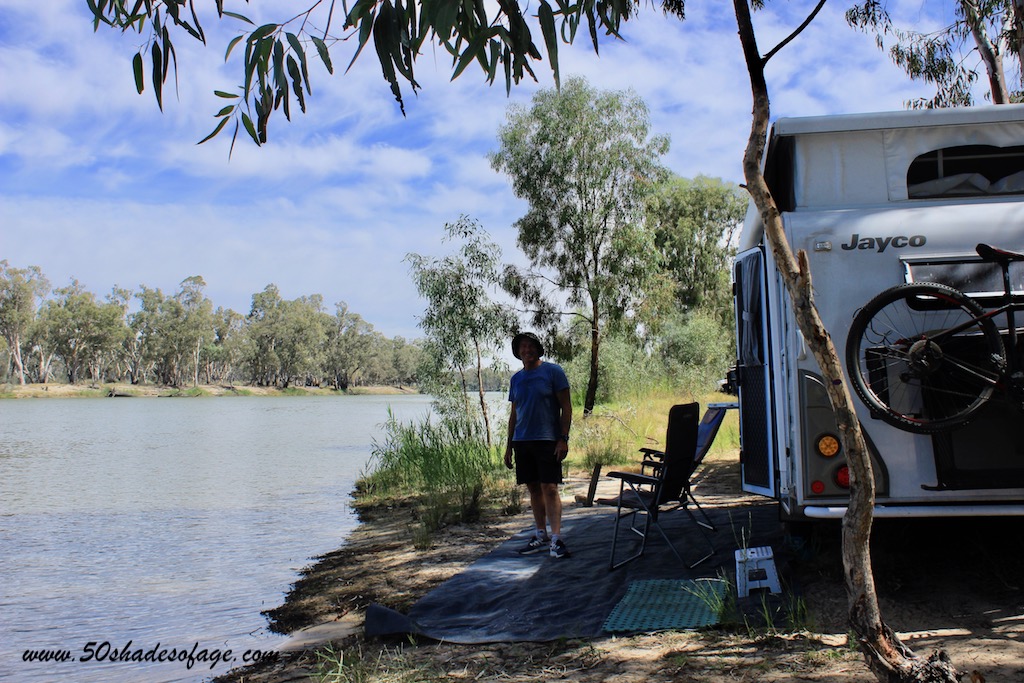 The next morning we dedicated to exploring Renmark. Our first visit was to the nearby Ruston’s Roses, Australia’s largest rose garden and home of the National Rose Collection of Australia. I wandered through rows and rows of colourful and fragrant gardens and was captivated by the variety and colours of roses grown on this 27 acre property. 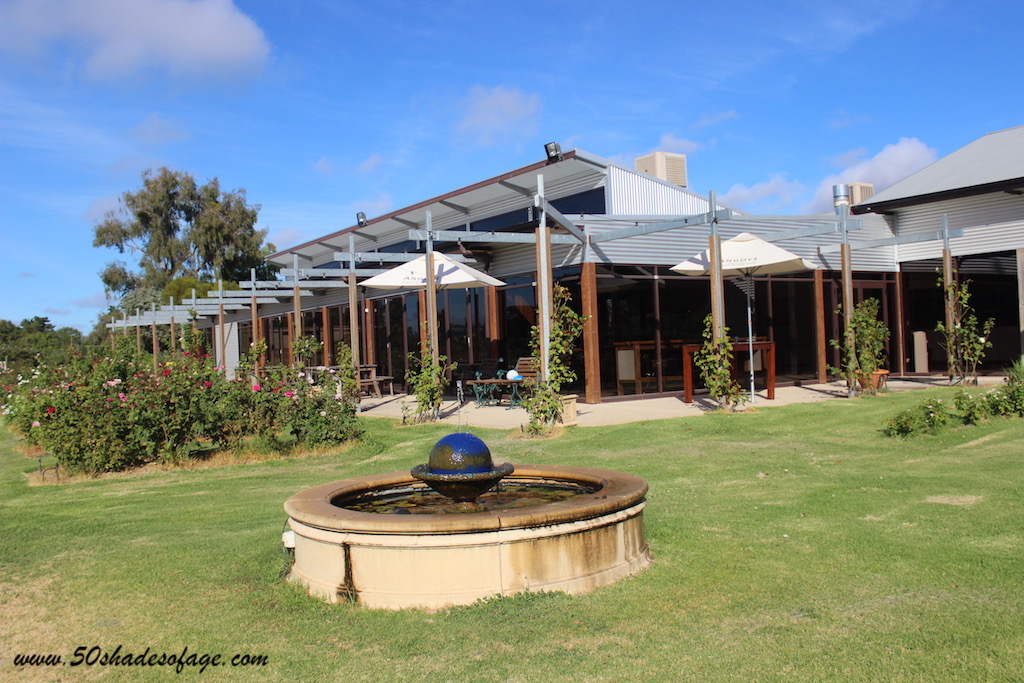 A drive into town took us to the Renmark Paringa Visitor Information Centre on the riverfront and an inspection of the historic Argo Barge and Paddle Steamer ‘Industry’. 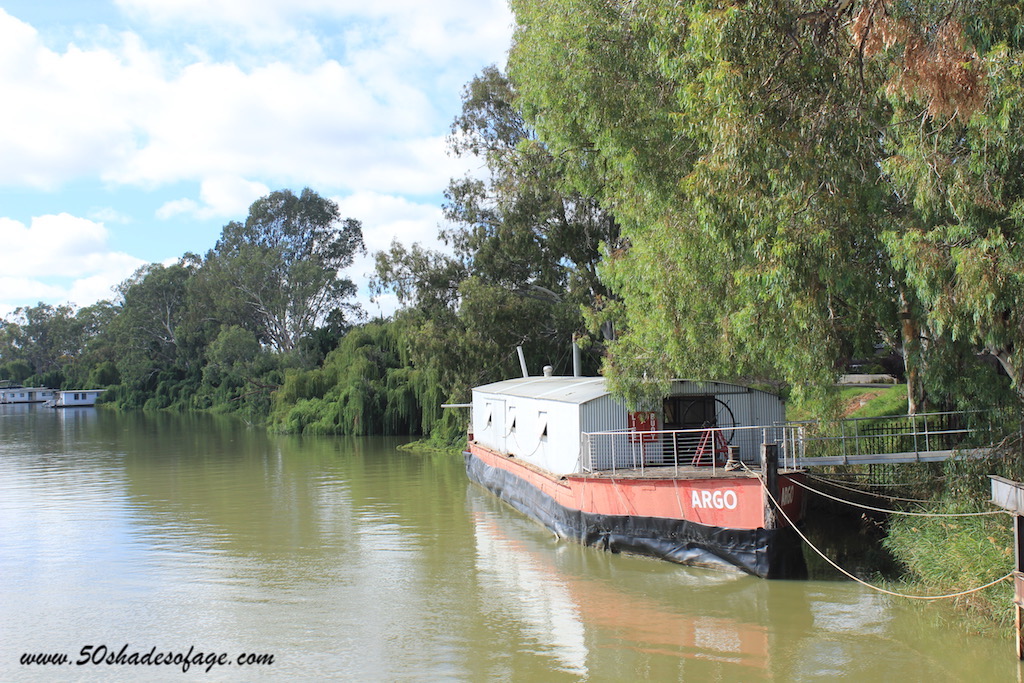 We saw from a distance what looked like a barge coming down the river with a pile of rubbish aboard, but soon discovered it was the home and houseboat of a local larrikin called The Chookman of The Murray, AKA Frank Turton. This wild and wacky houseboat has its own authentic Aussie Dunny, live chickens wandering around the boat and a heap of Australian memorabilia adorning the vessel. 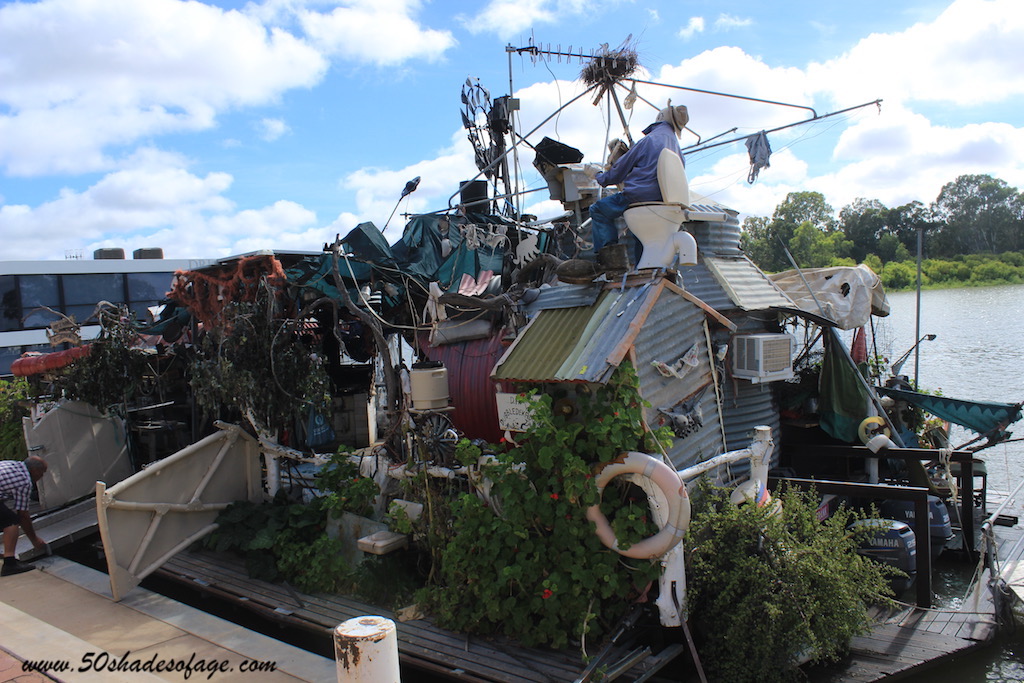 The Chookman of The Murray’s wild & wacky Houseboat

We walked through the parklands that fringe the river over to the wine glass shaped, Harry Clark Fountain and noticed the main street had perfectly manicured lawns and more rose gardens down the median strip. Such a pretty town! 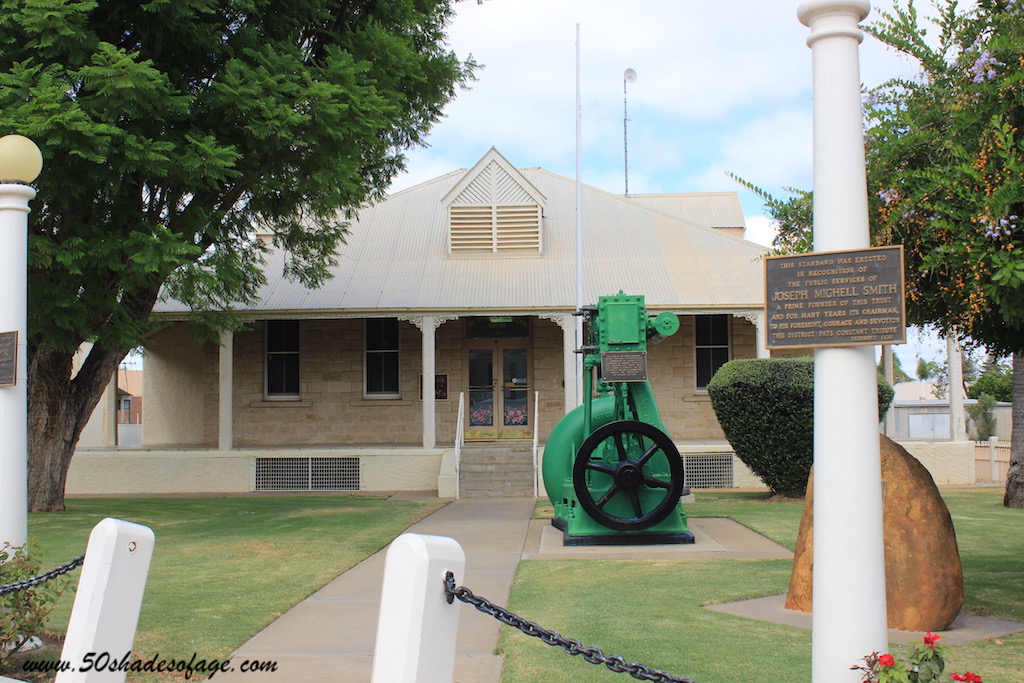 After a few hours of walking around Renmark and a morning coffee, we jumped back in our car on our way to the next town of Berri, stopping at Almondco Almond Hut to purchase some delicious locally grown, chocolate-coated almonds and some muesli that tasted so good, I ate it for dessert!

Berri, meaning ‘bend in the river’ in aboriginal language, is a mere 19kms from Renmark and was our next stop. I guess we’ve all heard of this town because of the Berri Fruit Juice factory. 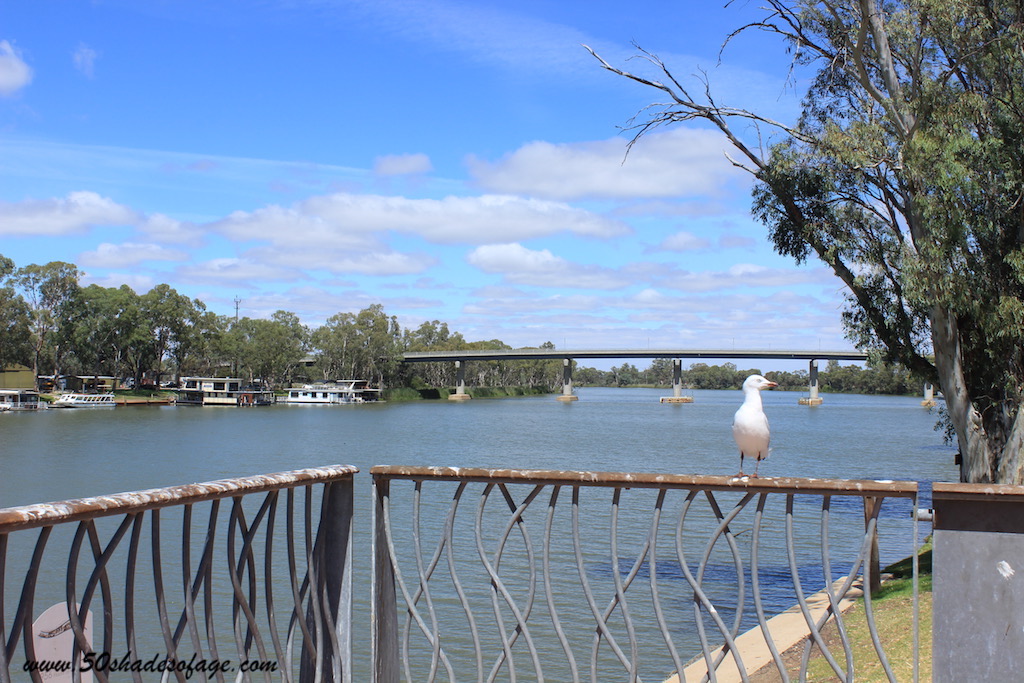 The river and bridge at Berri

The river is fringed with lovely parklands, the Visitors Information Centre, with a great looking cafe out on a deck overlooking the river. 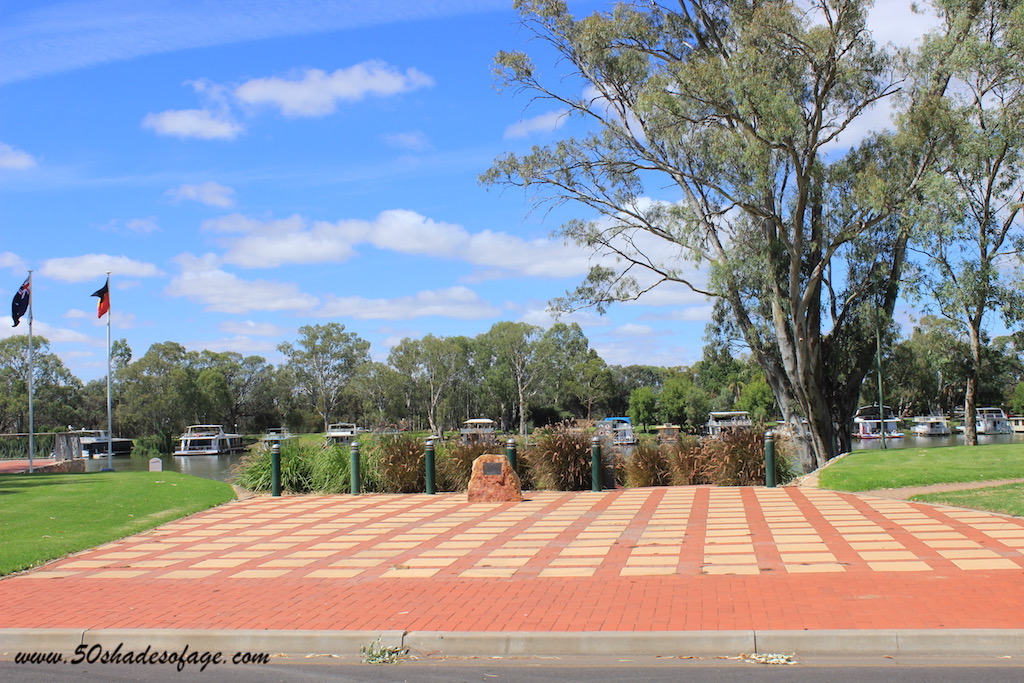 Lovely area on the riverfront in Berri

We wandered up the hilly, pine-clad main street to the water tower and scaled up to the top to get a bird’s eye view of the town and surrounding region. We also checked out the indigenous bridge mural on our way out of town. 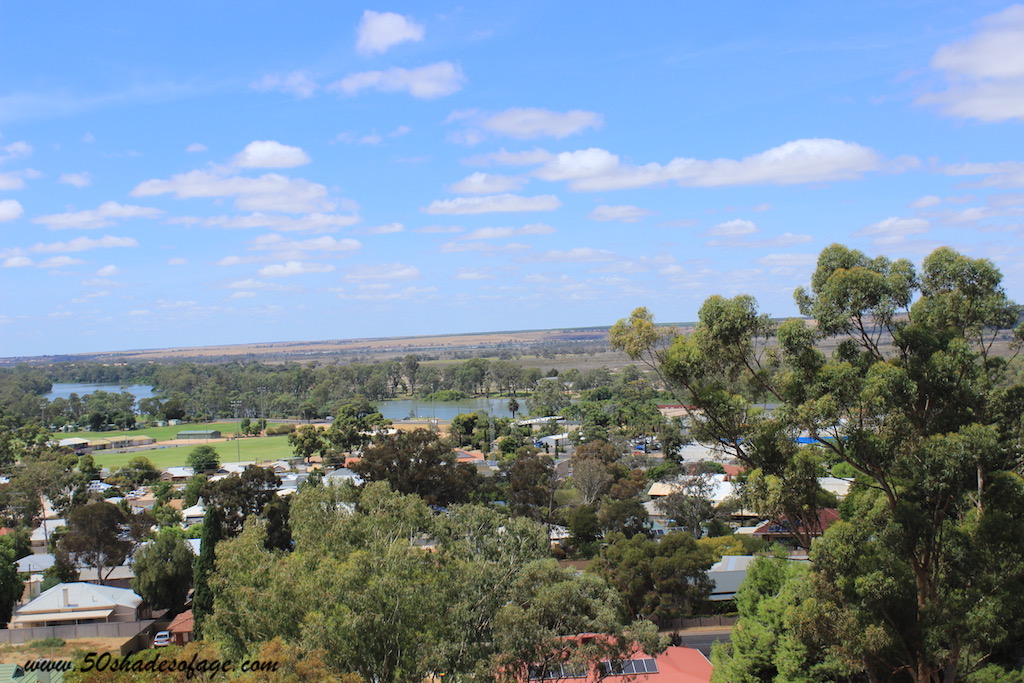 Bird’s eye view of Berri from the water tower

These little riverfront towns were so close together, but we had to explore each and every one! It was another short drive of 23kms to the town of Loxton, where we found a spot in the park on the river to eat our lunch. 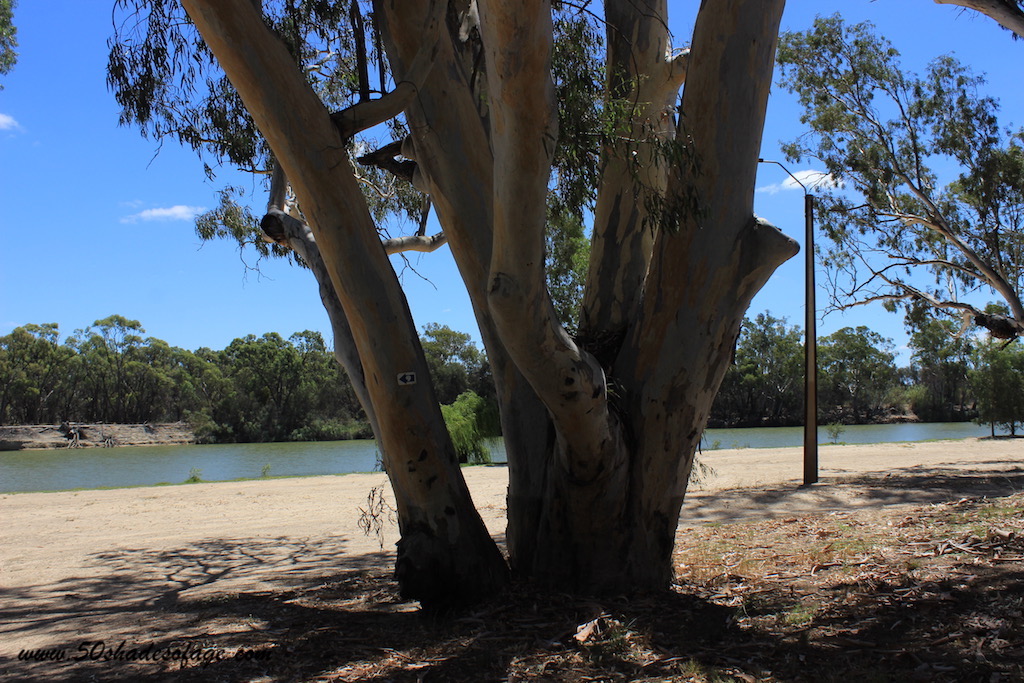 Nice sandy beaches on the Murray River at Loxton

Loxton has it’s own Historical Village where you can step back in time to see how the pioneers of this region transformed the dry Mallee Plains into lush citrus orchards. 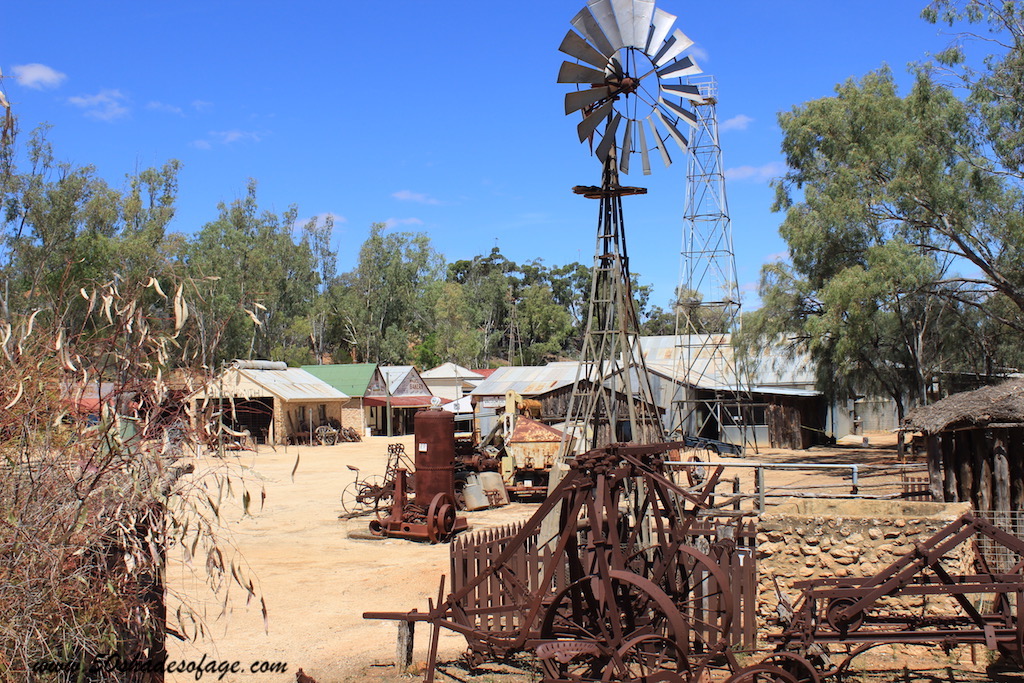 After a walk around the village we checked out Sturt’s Memorial, The Pines historic house and gardens, the wharf and mooring area for the plethora of houseboats and other watercraft. 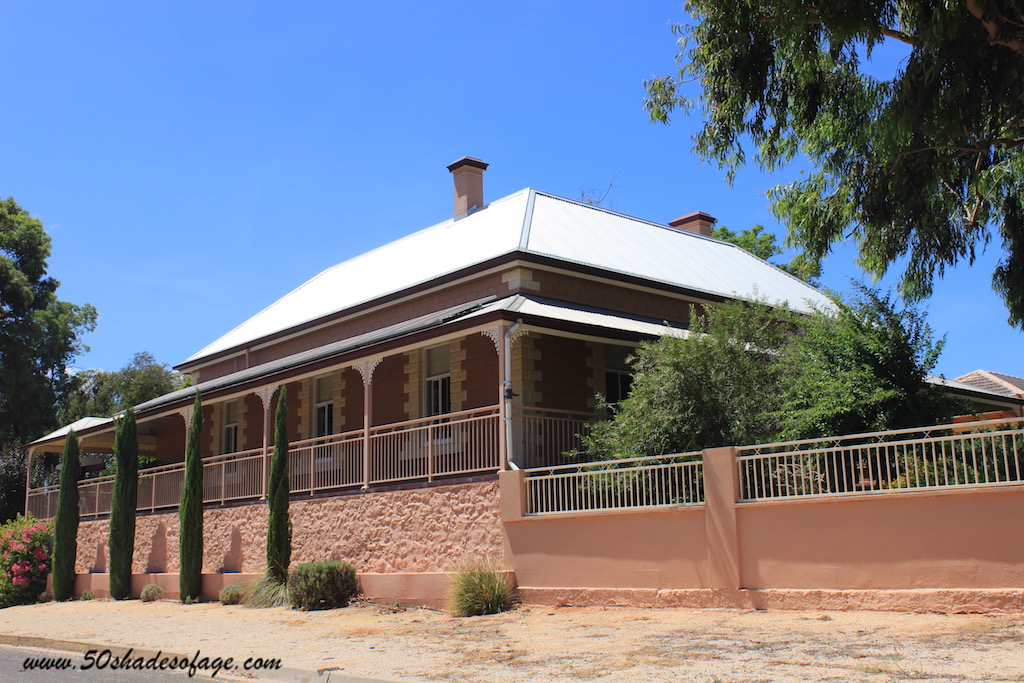 The Pines Historica House and Gardens

A short drive along the riverfront we entered the Lion’s Park where we saw the Tree of Knowledge, depicting the river levels on this magnificent old river red gum. There is a very peaceful riverfront Caravan Park here and further around at the rear of the park there is Packard Bend with some steep red cliffs on one side of the river and lovely sandy little beaches perfect for a dip. 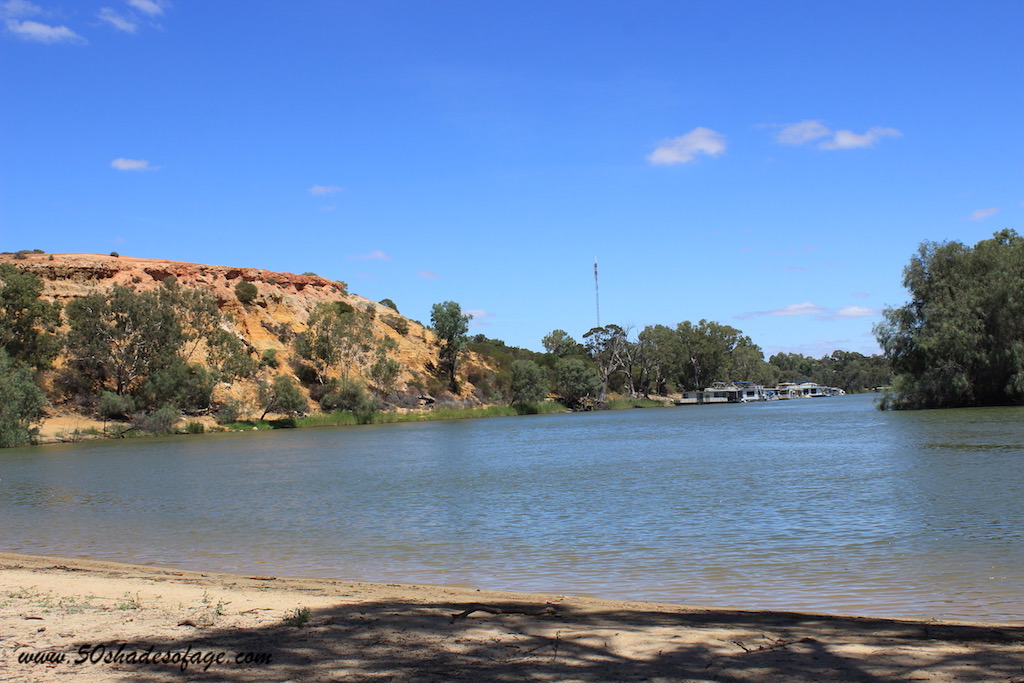 On the drive out of town we stopped to marvel at the tree sculptures in the Loxton Community Conservation Park. The lopped Aleppo Pine Trees provided the opportunity for the trunks to be sculpted into public art by local students depicting native animals, flora or fauna. They were fascinating! 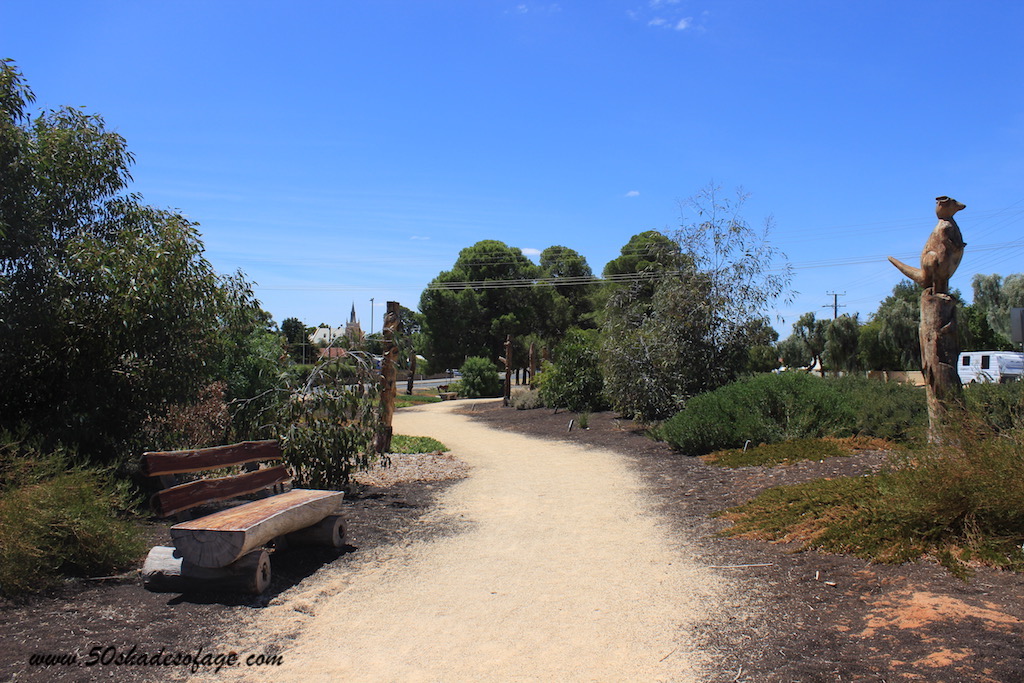 After we left Loxton we had to make the decision whether we would continue tracing the Murray River, which at this point heads north for a distance to the towns of Barmera, Waikerie, Morgan and Blanchetown, before doing a u-turn back south. We realised that our time was getting short because we had a ferry booked to Kangaroo Island in a few days time. Otherwise we could cut across heading due west to the town of Swan Reach cutting out this section of the Murray River. 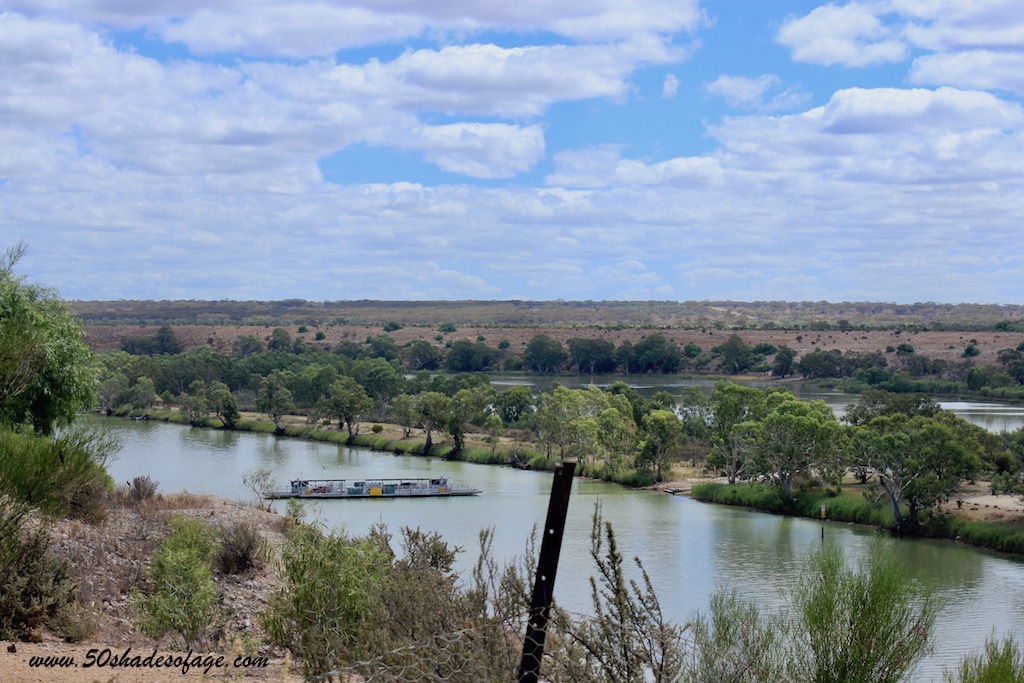 Views over the Murray River at Swan Reach and the Barge

We decided to head to Swan Reach, a distance of 95kms, and were once again confronted by dry barren terrain. There were a few little farming towns along the way – blink and you’ll miss them type of towns, but otherwise not much else. 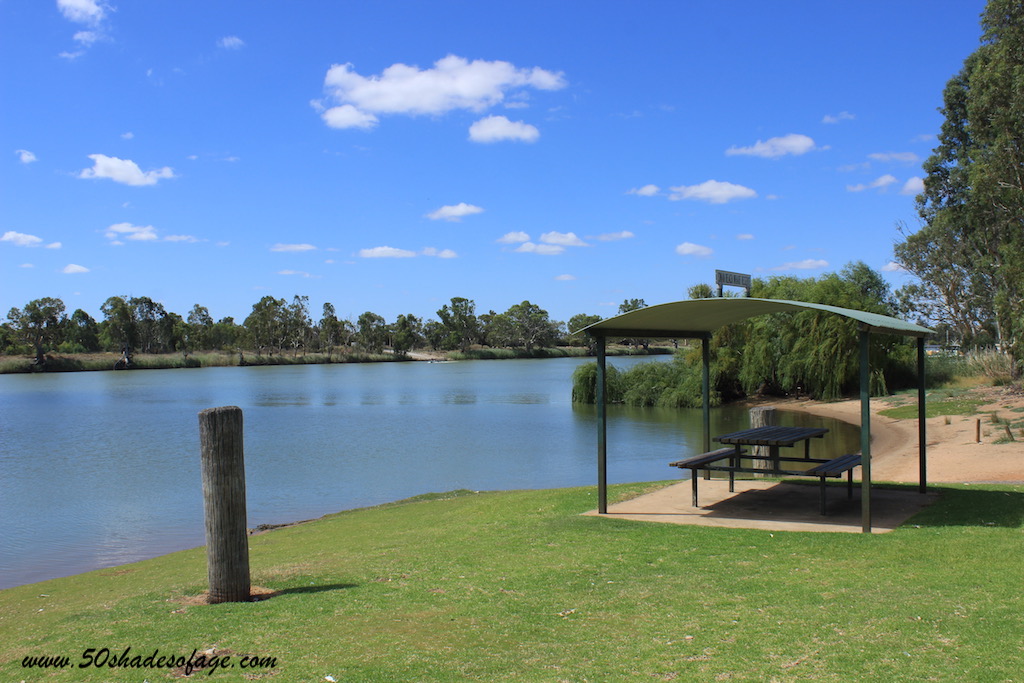 The riverfront and parkland at Swan Reach

We arrived in Swan Reach and the welcoming sight of the Murray River once again mid afternoon. We played some lawn bowls at the local Bowls Club situated right on the river, and then caught the river barge across to the other side of the river to the free camping area. 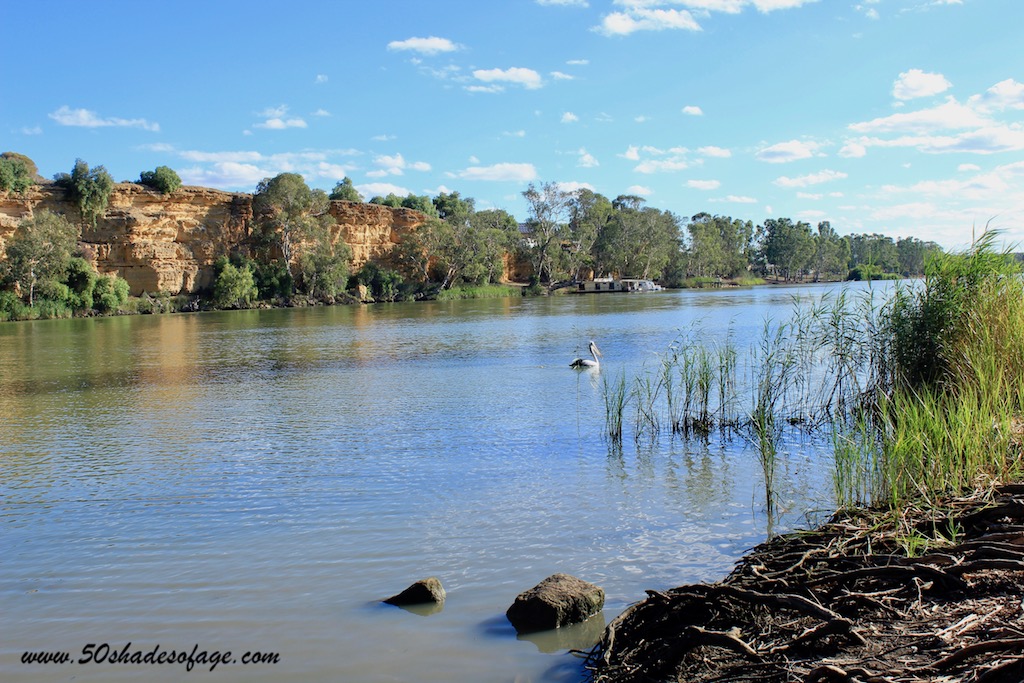 Outlook from our campsite at Swan Reach

There’s not a real lot in Swan Reach but there is a lovely little park with a sandy beach, a small caravan park, general store and a terrific pub set up high with sweeping views of the Murray cliffs and river. Our campsite for the night also afforded us spectacular views of the cliffs that changed colour as the sun set. It was a fabulous spot for wine o’clock watching river boats, waterbirds and the light glimmering off the river and cliffs. 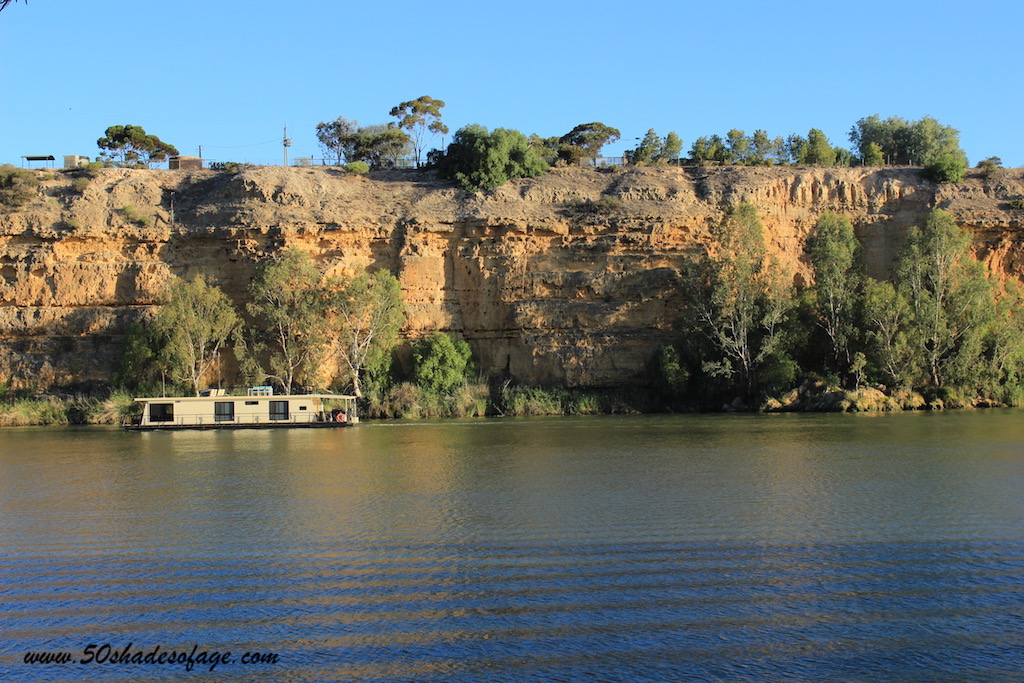 The Victorian/New South Wales section of the Murray River really blew me away, however once we crossed the border into South Australia I found it to be even more spectacular. These Riverland towns all had something special and unique to offer and once we hit the steep cliffs of the Murray at Swan Reach I was amazed at their grandeur.

Spread the love
BerriDiscover Murray RiverLoxtonMurray RiverRenmarkSwan ReachTravel South Australia
By 50 Shades, March 26, 2018 Kathy was a 50 something year old when she started up this blog 6 years ago, but has since turned over another decade and is now in her early 60s. She is married with two adult children and lives on the Tweed Coast of New South Wales, Australia. Kathy enjoys living life to the fullest and loves to keep fit and active by maintaining a healthy diet and exercising regularly. Some of her interests include reading, photography, travelling, cooking and blogging! Kathy works part-time as a freelance writer but her real passion is travelling and photographing brilliant destinations both within Australia and overseas and writing about it.