The Charm of Piran 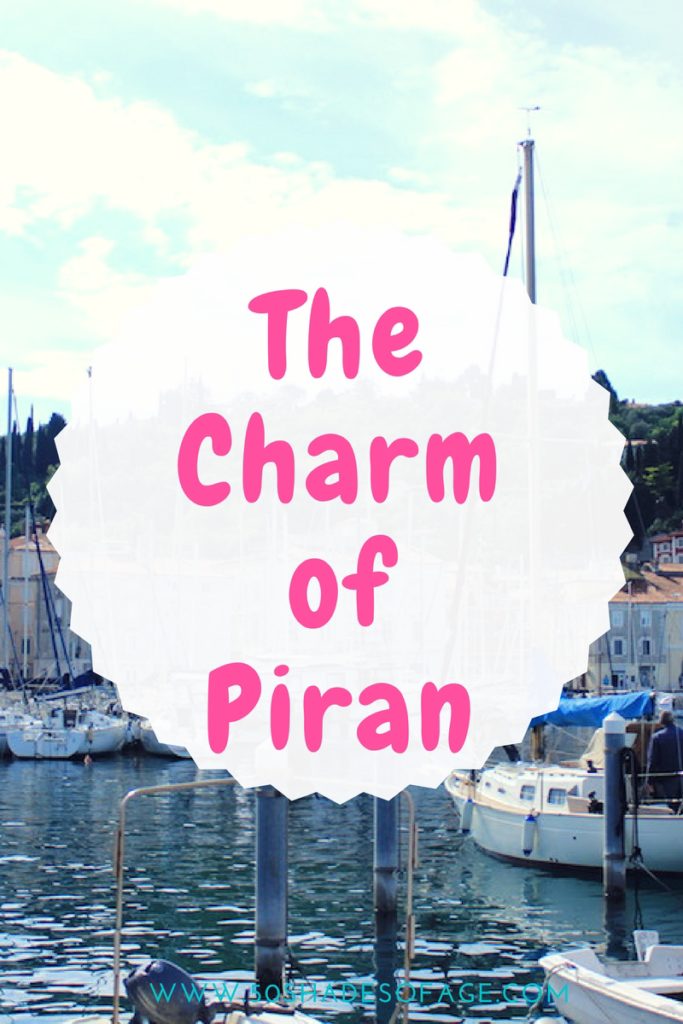 We had arrived at our penultimate cruise stop, prior to reaching our disembarkation port in Venice, at the port of Koper in Slovenia. I guess we were all excited because we had arranged a cycling tour through the Slovenian countryside to the charm of Piran – a seaside village.

However, due to rain overnight, we were told that our cycling tour was cancelled because of wet roads (that we found no evidence of), and that we were joining another couple on a tour by car to Piran. We were not impressed because the ground around us looked decidedly dry and we were all looking forward to some fresh air and exercise. 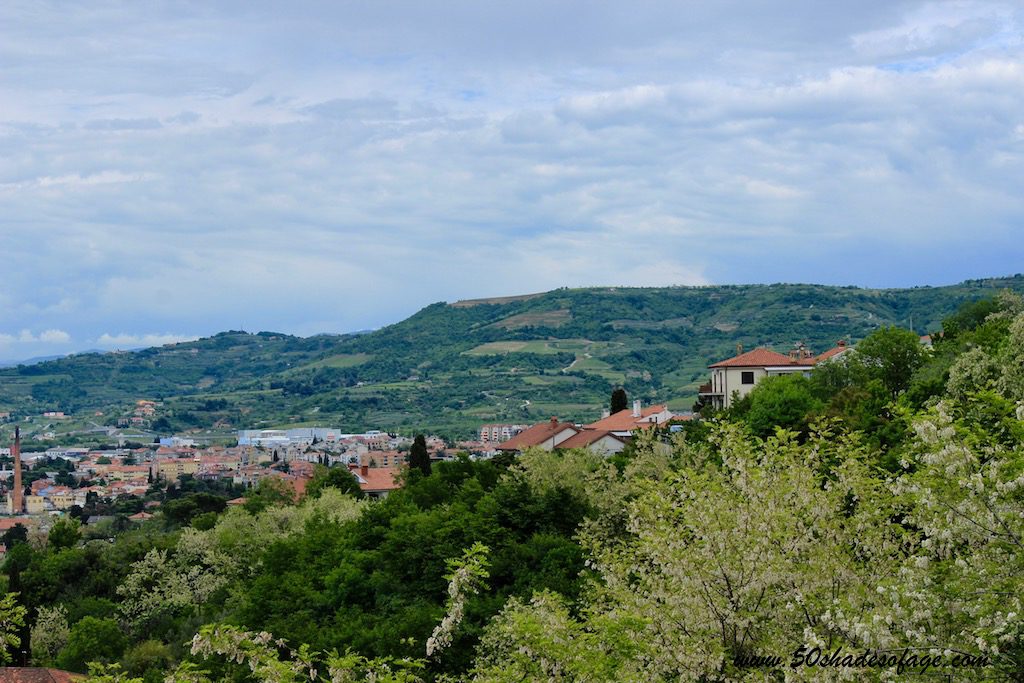 Views of Slovenia from a lookout outside Koper

I basically had no prior knowledge of this Central European country on the Adriatic Sea. Although I had heard of its capital, the almost unpronounceable Ljubljana, and the glacial lake of Lake Bled. Formerly it formed part of the Federal People’s Republic of Yugoslavia but became an independent state in 1992. Slovenia borders Italy to the west, Austria to the north, Hungary to the northeast, and Croatia to the south and southeast.

Slovenia is a green country, with its location between the Alps, the Mediterranean and the Pannonian Plain. Over half of the country is covered with forests, boasts 50 parks and almost twice as many nature reserves. So you can understand why we were so eager to cycle through some of this lush green landscape. 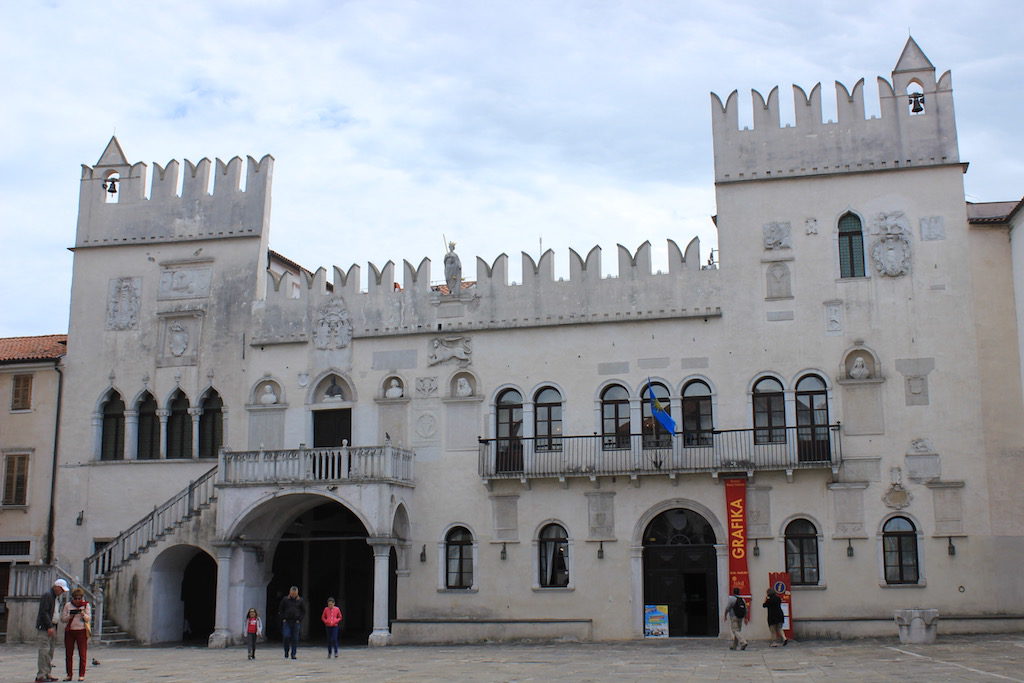 Our day started and ended in the port city of Koper. This place dates back to the sixth century and was originally part of the Venetian Republic. When you think about it the Italian town Trieste is more or less a stone’s throw away and Venice is only 2 hours away. 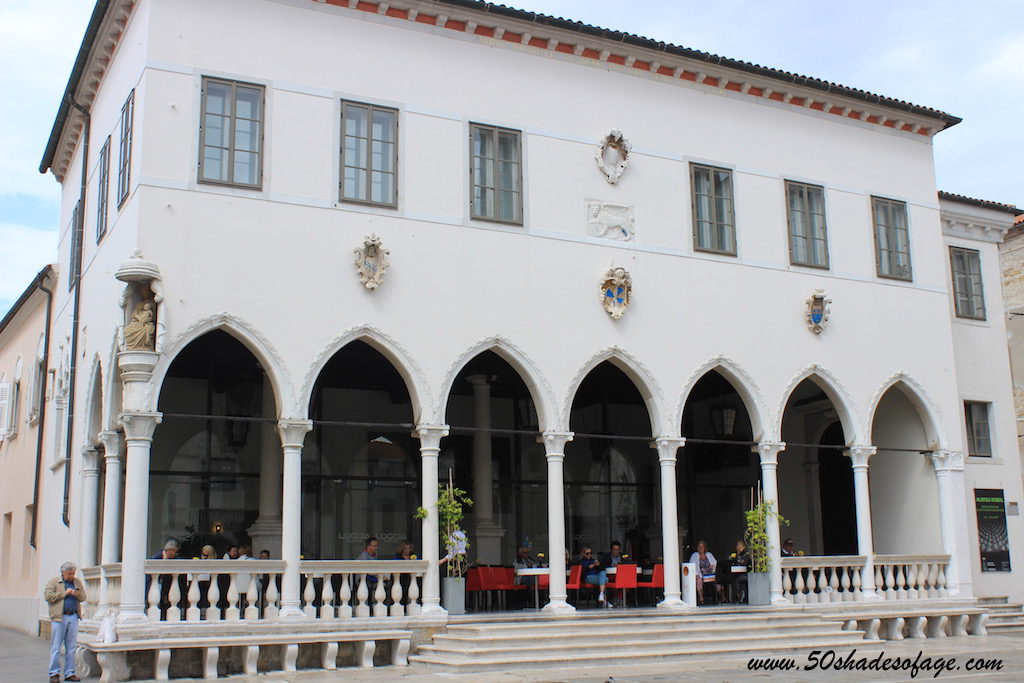 A Hotel in Koper Old Town

The town, apart from being a busy trading port has an old town with a central town square surrounded with secular and religious buildings from the 15th century. Praetorian Palace takes pride of place in Tito Square, the city bell tower adjoining the Cathedral of Mary’s Assumption with its romanesque structure and the Foresteria with the Del Corte Renaissance portal and the Armeria. 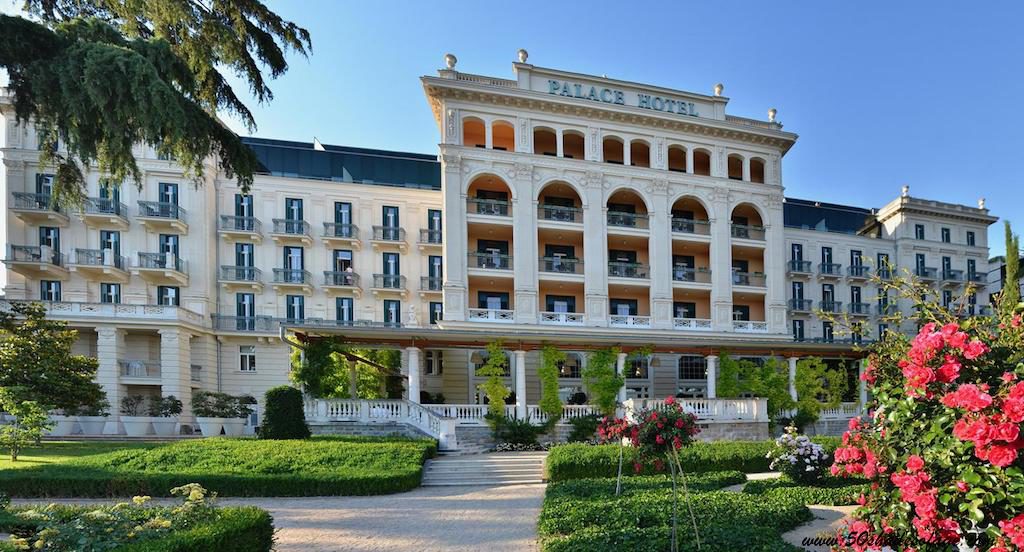 The Palace Hotel in Portoroz

Our tour guide set off towards the seaside town of Piran that was only a half hour drive away through green pastures, valleys and forest. We drove through the seaside resort town of Portoroz, popular for its spas that offer therapeutic treatments based on the mud and brine from the nearby Sečovlje Salina salt pans. 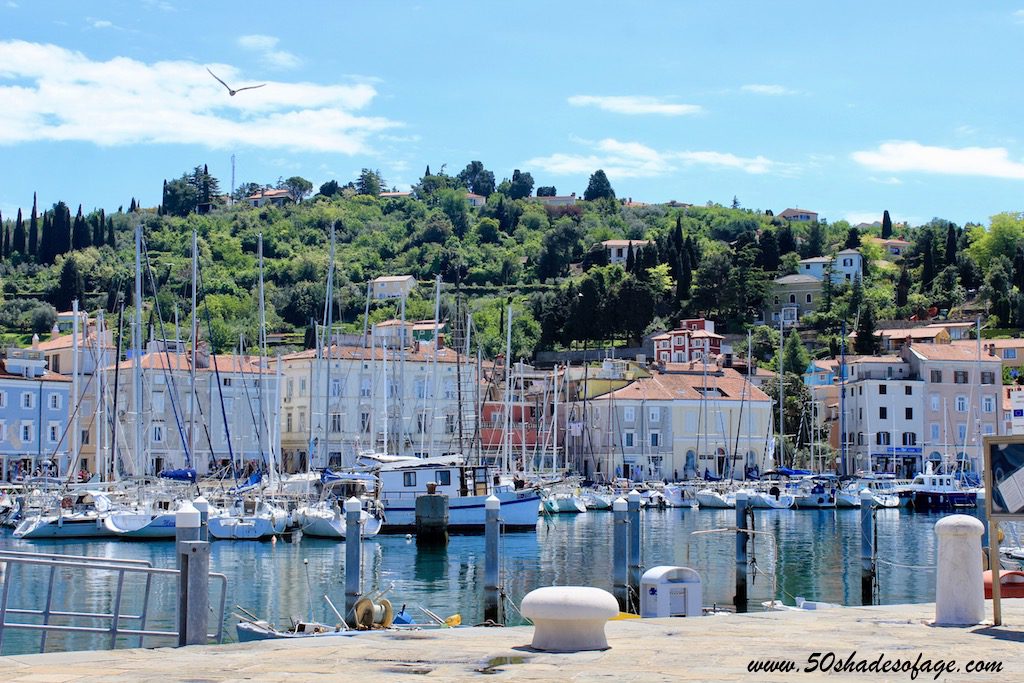 The Seaside Town of Piran

Piran was part of the Venetian empire from the late 13th century to the end of the 18th century and then part of Italy from 1918 til 1947. 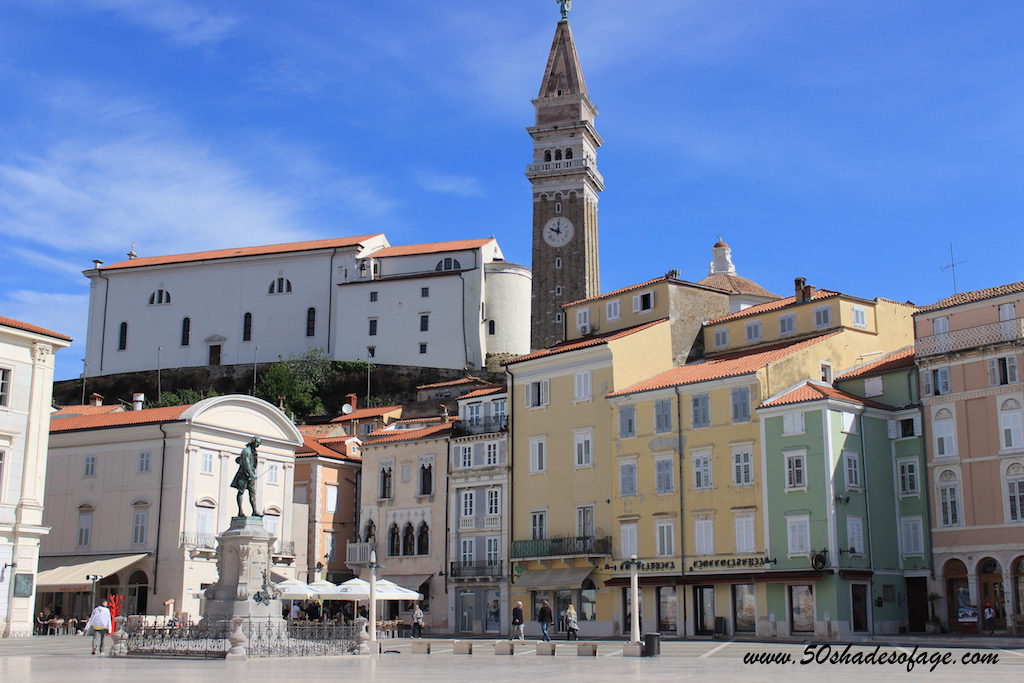 When we arrived at Piran we were immediately struck by the charm and beauty of this seaside town. Whilst our tour guide parked the car we strolled into the town square and felt as though we had stepped right into a picture postcard. Taking pride of place is the statue of the most famous man in Piran, the well-known Giuseppe Tartini, composer and virtuoso violinist who was born in a house just steps from the square. 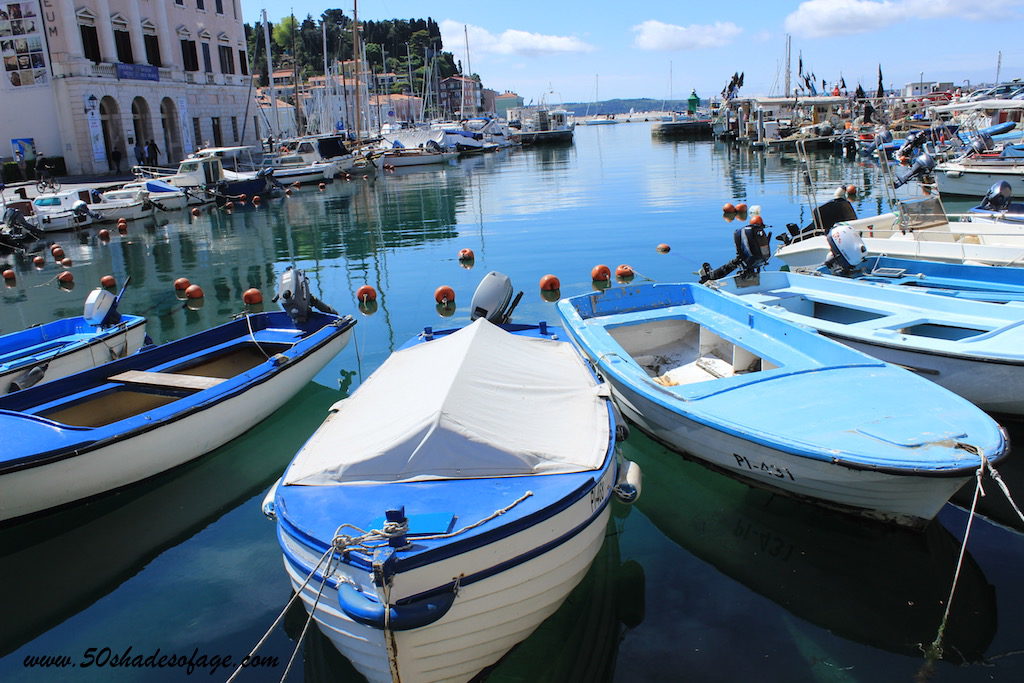 In the small bay fisherman were unravelling their fishing nets on the piers and locals were sitting by the sea, chatting and enjoying the warm sunshine and the sparkling sea. After a history lesson from our tour guide about Tartini Square and some of the buildings facing onto the square we set off on a walking tour through the narrow laneways of the town. 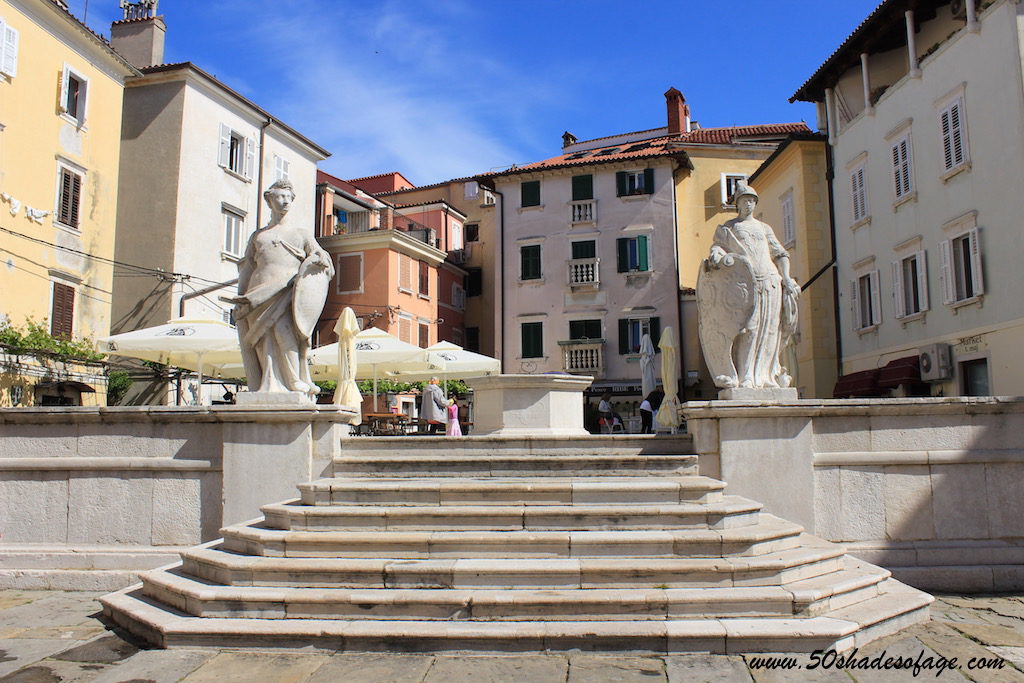 1st of May Square in Piran

A short distance away we came to another square called 1st of May Square, formerly the Old Square, that used to be the administrative centre of the town up until the 13th century. In the centre of the square, there is a stone rainwater cistern, which was built after a severe draught in the year 1775 and at either side of the stairway to the entrance to the square are two statues – Law and Justice. 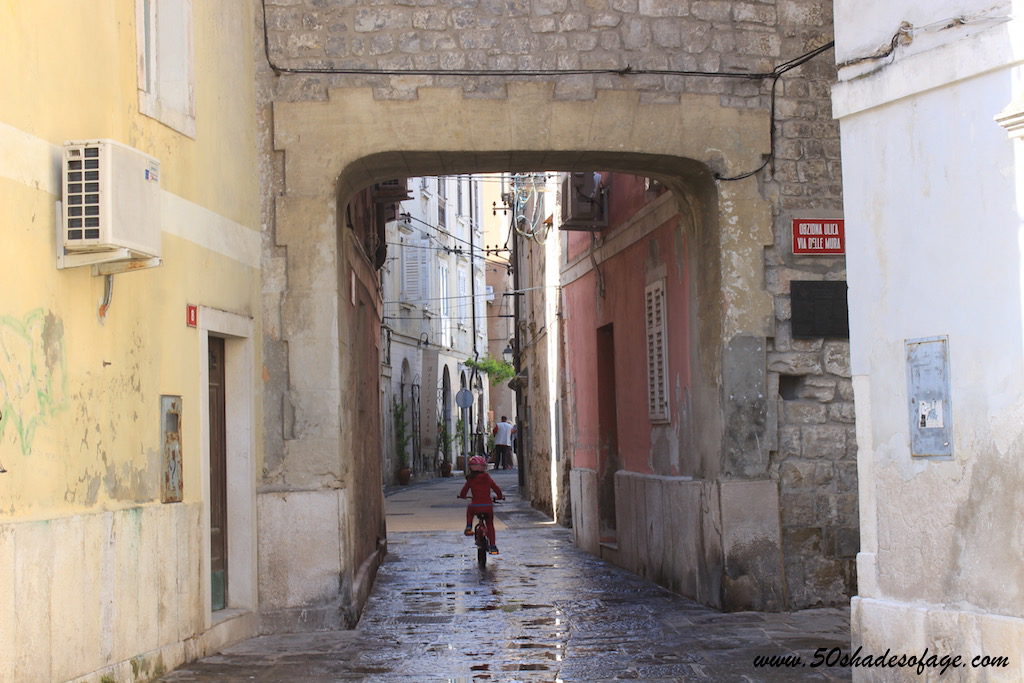 As we ambled through the town we learnt that most of the buildings possessed Venetian architecture and rich frescoes. We listened to legends and tales of the wealthy families of Piran. 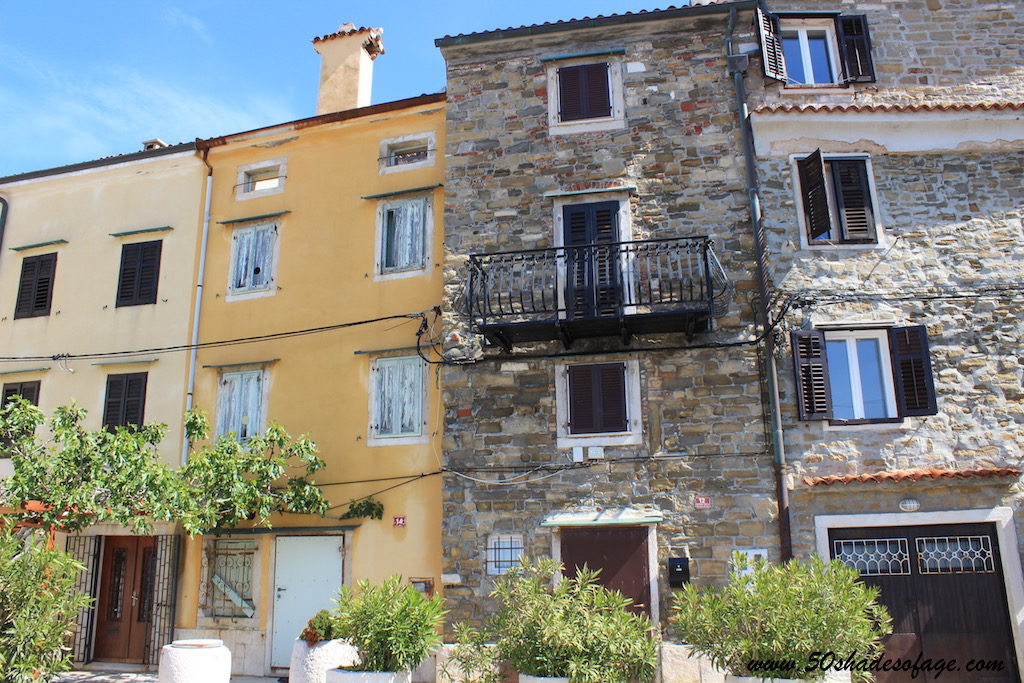 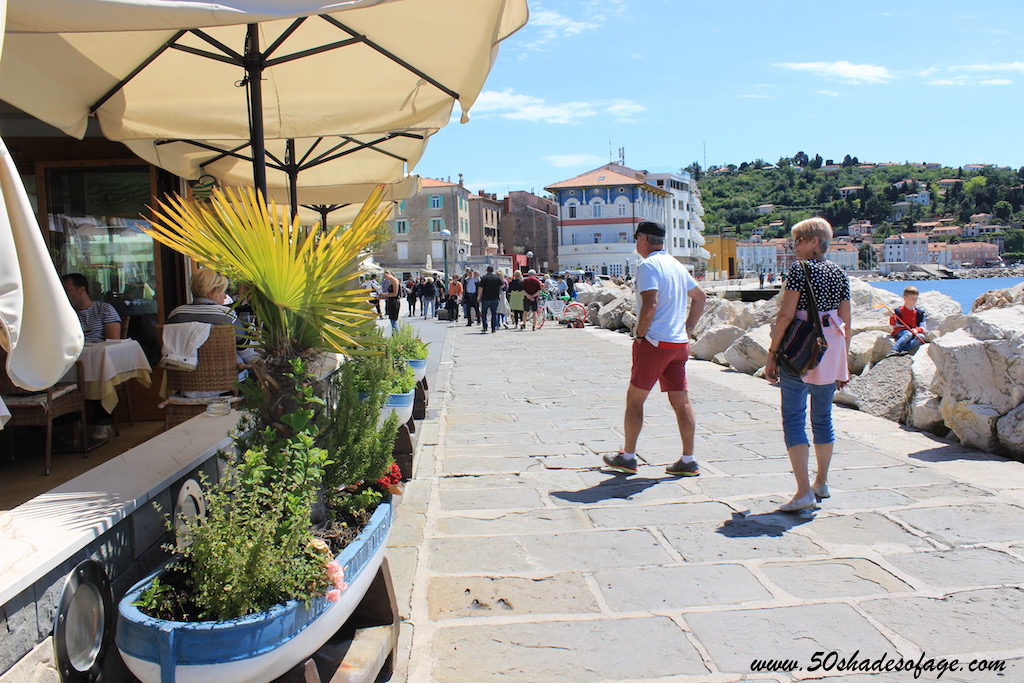 The Riva in Piran

Eventually we walked along the promenade or riva, lined by cafes and restaurants and made our way to Cape Madona and the small church of Cerkev Marije Zdravja, with Punta Lighthouse and the round, serrated tower of the Church of St Clement located at the rear on the point. 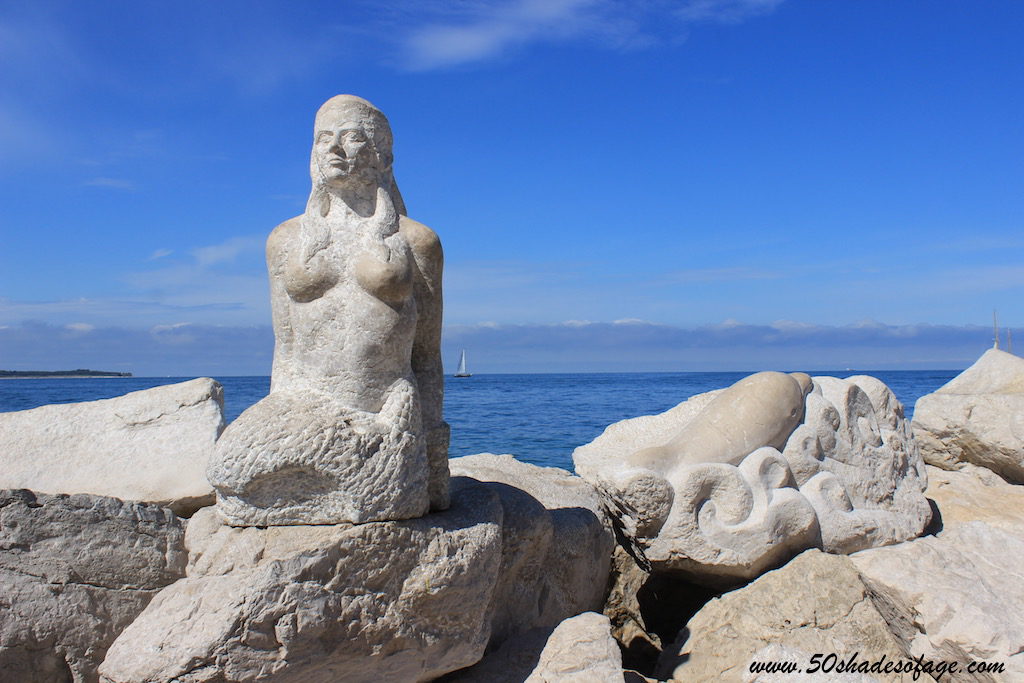 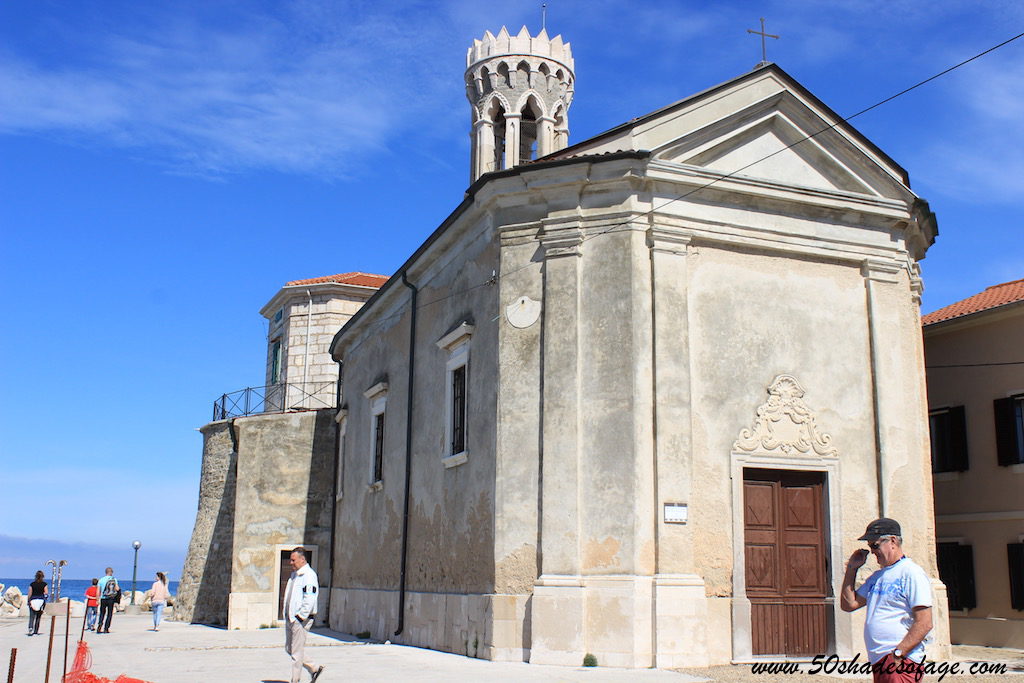 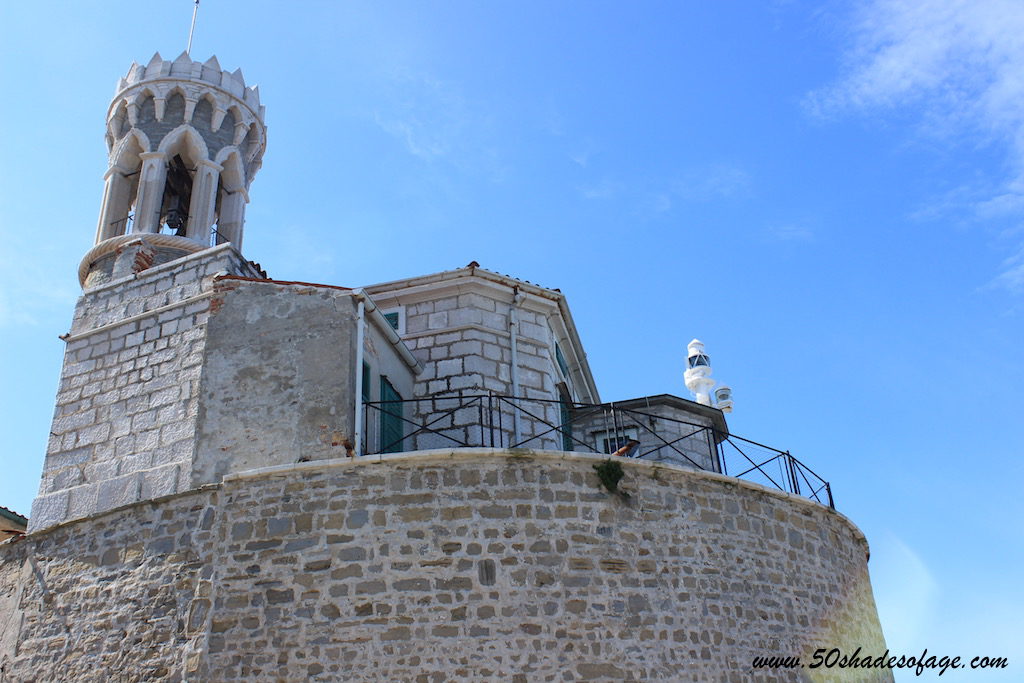 After a small climb we came to St George Cathedral, that afforded panoramic views back over the town and the sea. The cathedral was built in the 12th century with further additions in the 14th century. In the year 1637 it underwent a baroque renovation and the belfry and the baptistery were added in the year 1650. We queued up to have a quick look inside the cathedral with its seven impressive marble altars. For a small fee you can also enter the museum and bell tower to climb to the top. 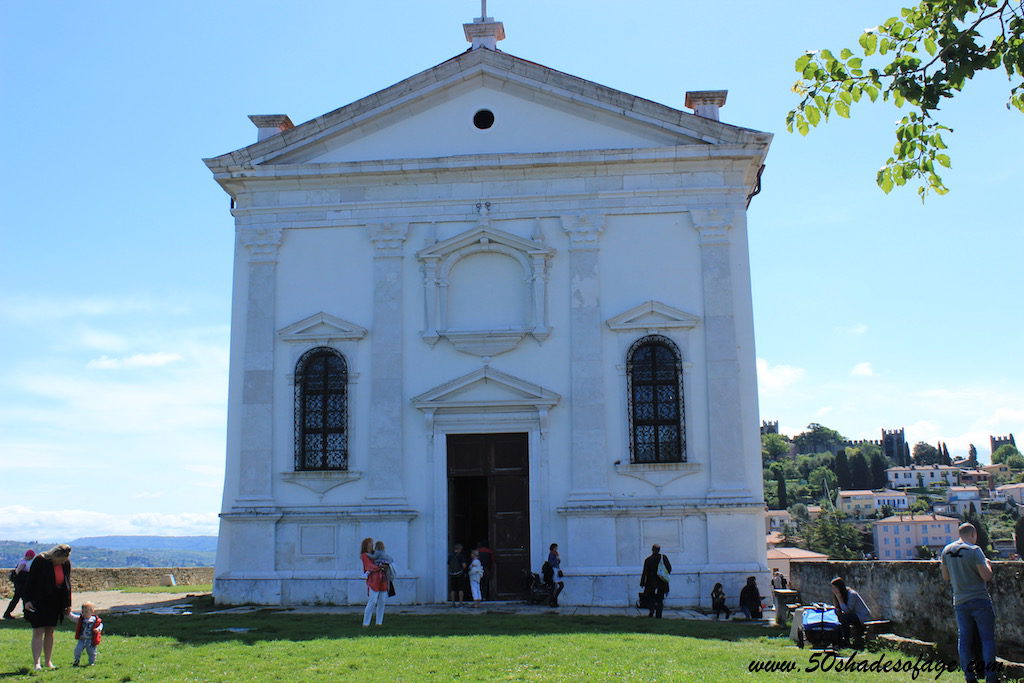 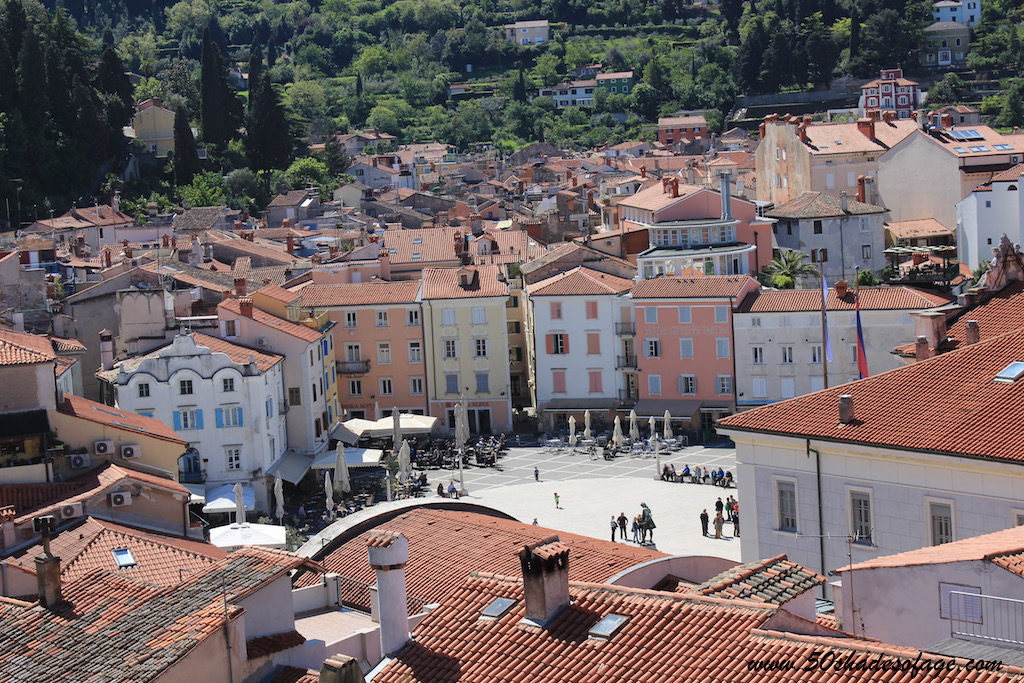 Towering above Piran high up on the hill, are the old town walls that were built over a period of time in typical Romanesque and later on in Gothic style. The town walls were eventually completed between the years 1470 and 1534 and had eight crenellated towers with battlements. Our tour guide was not keen to take us higher up the hill, otherwise we would have scaled uphill to these walls to check them out. 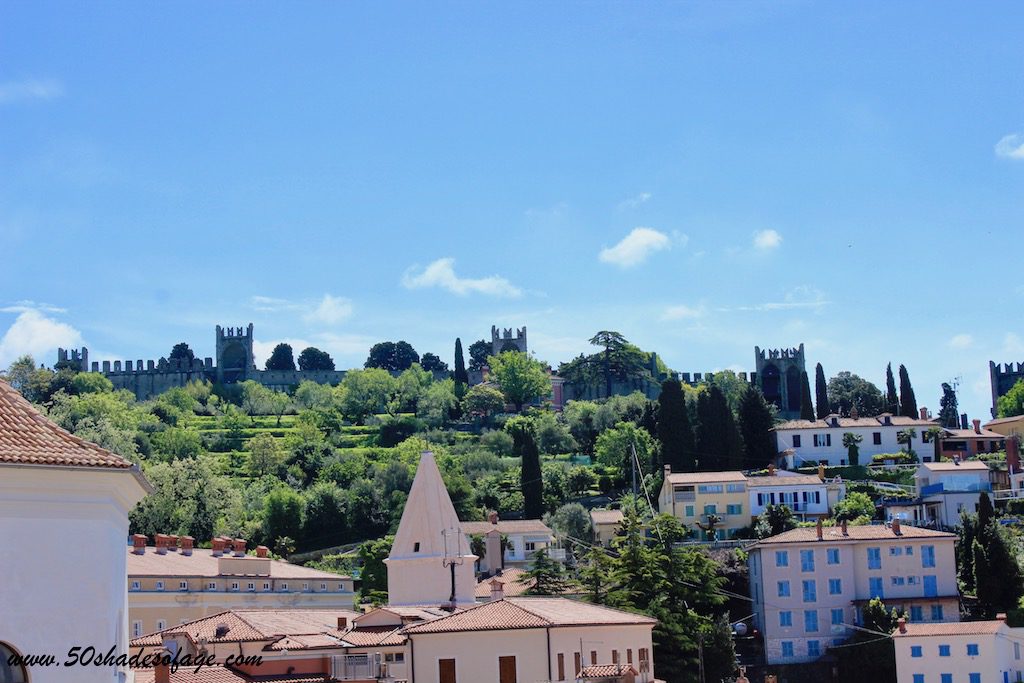 The Old Walls of Piran

Other things of interest to do in Piran are visiting the Aquarium, Sergej Mašera Maritime Museum, Museum of Underwater Activities and Magical World of Shells Museum. 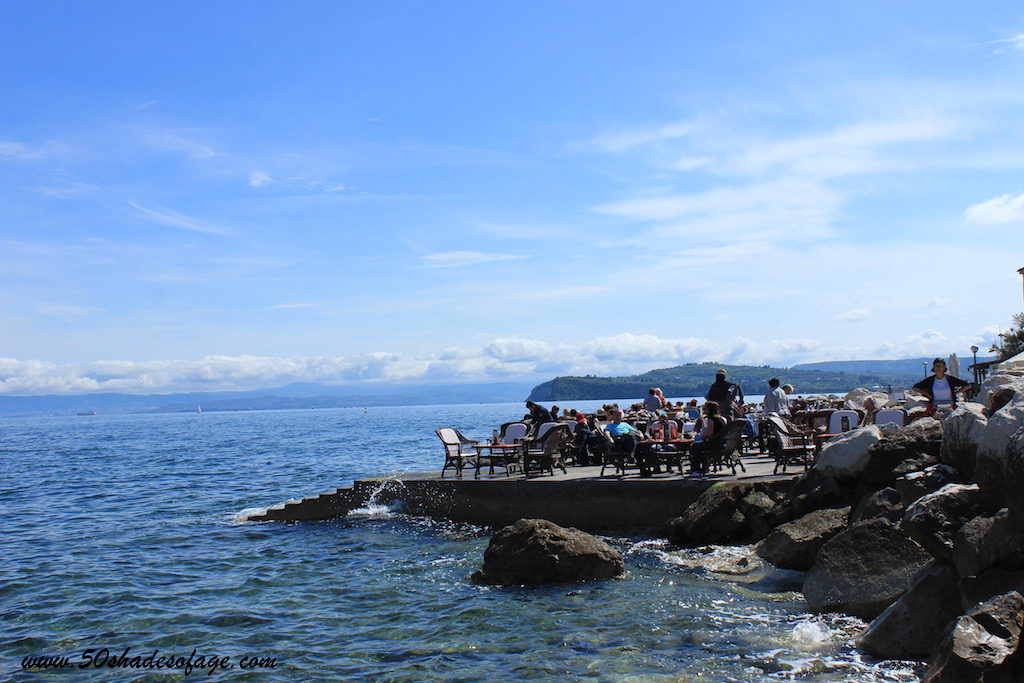 A restaurant on Piran Riva 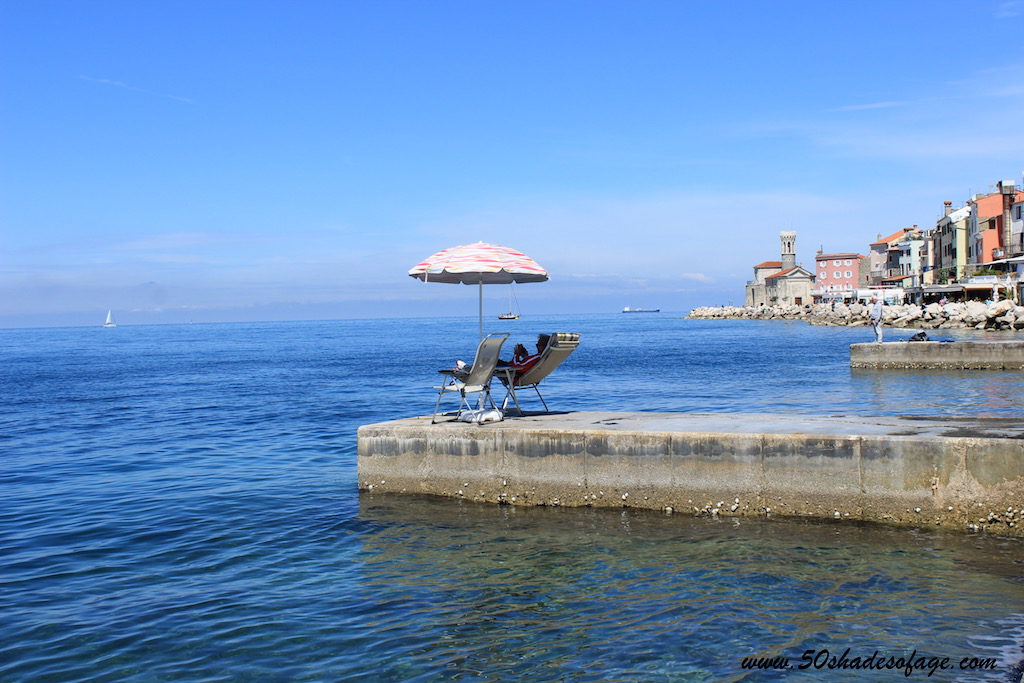 After a delicious lunch of local calamari and a Greek style salad, it was time to return to Koper. Our tour guide took us to a couple of lookout spots where we got spectacular views over Izola, an old fishing town, and also over the port of Koper. 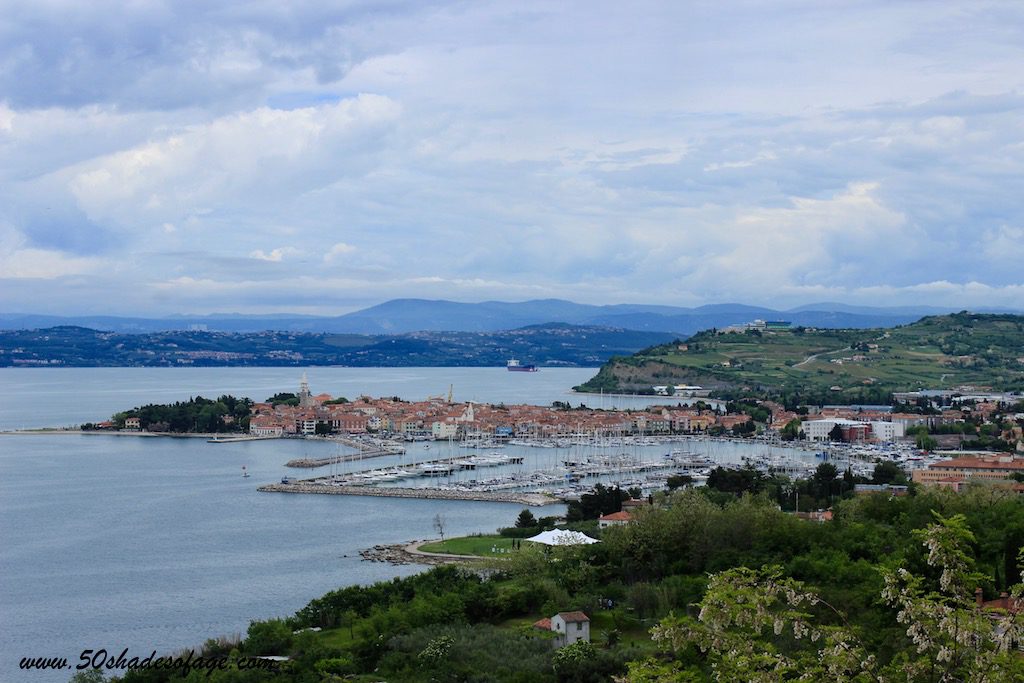 Although Piran was a charming town, we couldn’t shake off the disappointment of not being able to do the cycle tour. We felt a little ripped off and although the road trip was great, it wasn’t what we planned to do. Our day in Piran was memorable and we did enjoy visiting the little known country of Slovenia.

Spread the love
IzolaKoperMediterranean CruisePiranSlovenia
By 50 Shades, July 31, 2017 Kathy was a 50 something year old when she started up this blog 6 years ago, but has since turned over another decade and is now in her early 60s. She is married with two adult children and lives on the Tweed Coast of New South Wales, Australia. Kathy enjoys living life to the fullest and loves to keep fit and active by maintaining a healthy diet and exercising regularly. Some of her interests include reading, photography, travelling, cooking and blogging! Kathy works part-time as a freelance writer but her real passion is travelling and photographing brilliant destinations both within Australia and overseas and writing about it.