Into The Fiordland of Milford Sound 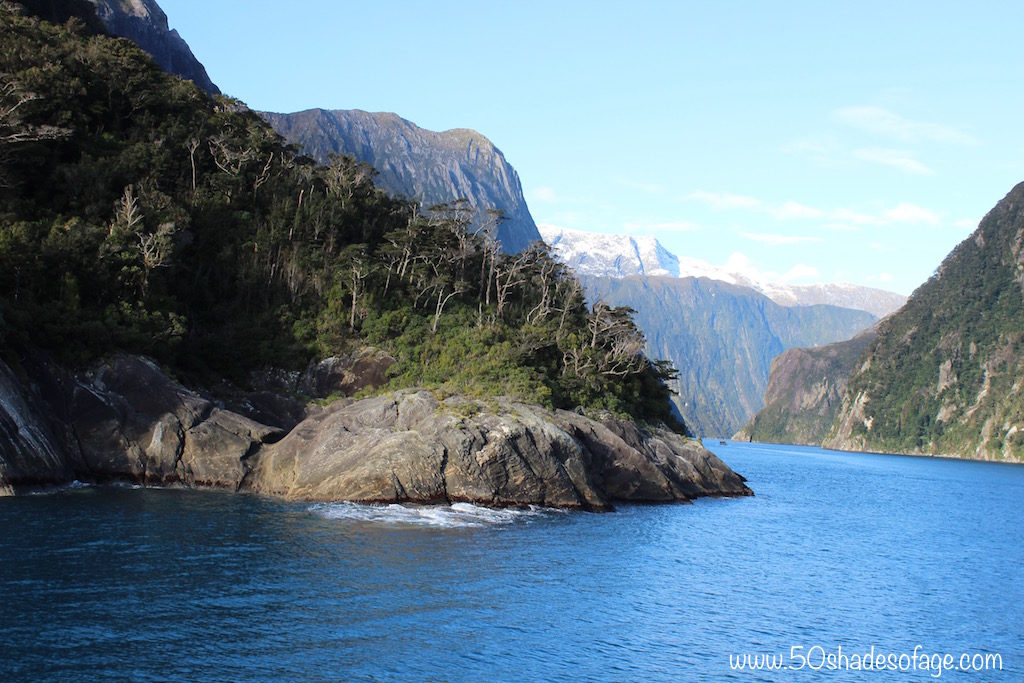 Entrance to Milford Sound from the Tasman Sea

It was one of those travel experiences that we have wanted to do for a while and we knew that it involved a very long drive through mountainous terrain from Queenstown. However Milford Sound on the south west of New Zealand’s South Island, within Fiordland National Park was never going to disappoint. 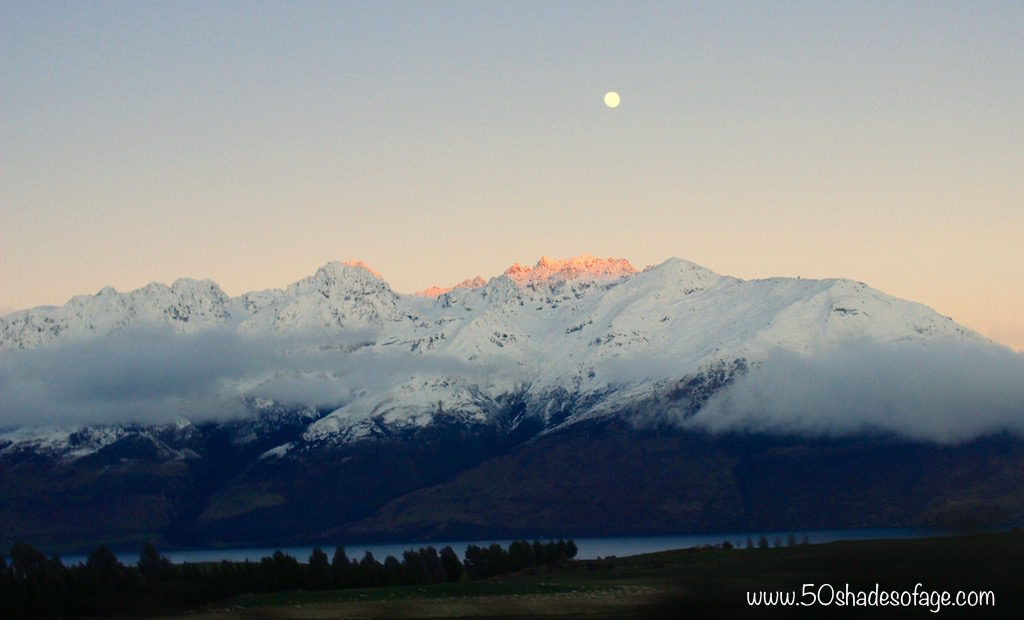 Milford Sound is 295km from Queenstown and involves over four hours of travel through some of the most spectacular countryside you will ever see. We departed Queenstown very early, before the sun was really up and wound our way around the gentle curves of Lake Wakatipu, watching the sun starting to peek through the mountains that surround the lake. 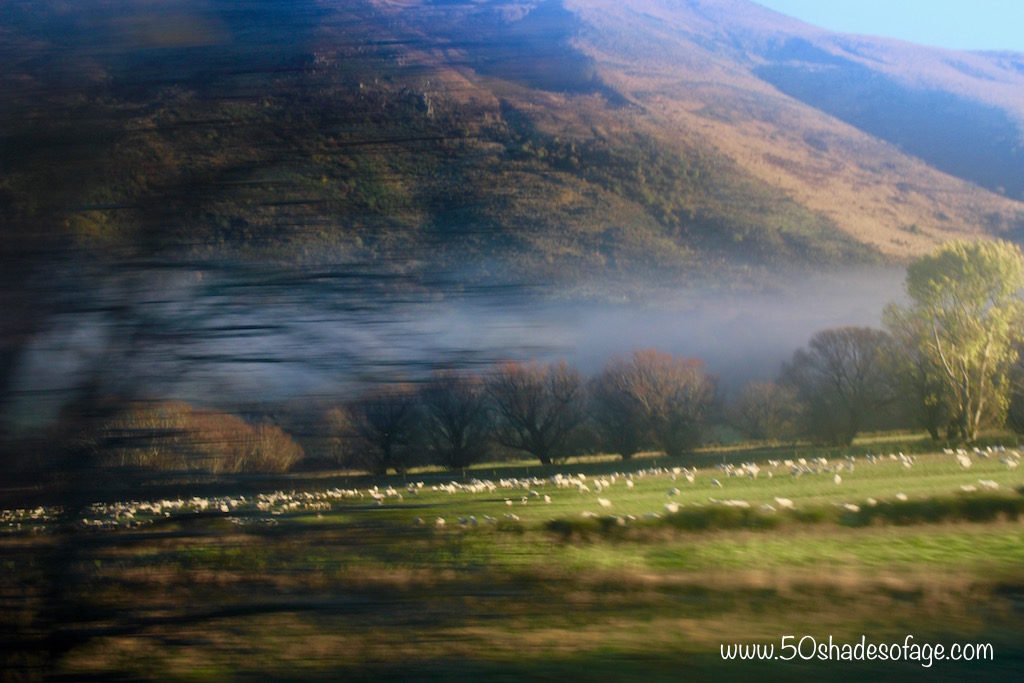 Once we reached Kingston, a small town at the southernmost end of Lake Wakatipu, the terrain flattened out a little and we travelled through lush green farmlands, consisting mainly of sheep, cattle and deer. Orange-brown Tussock grasslands sometimes broke up the patchwork of green pastures. 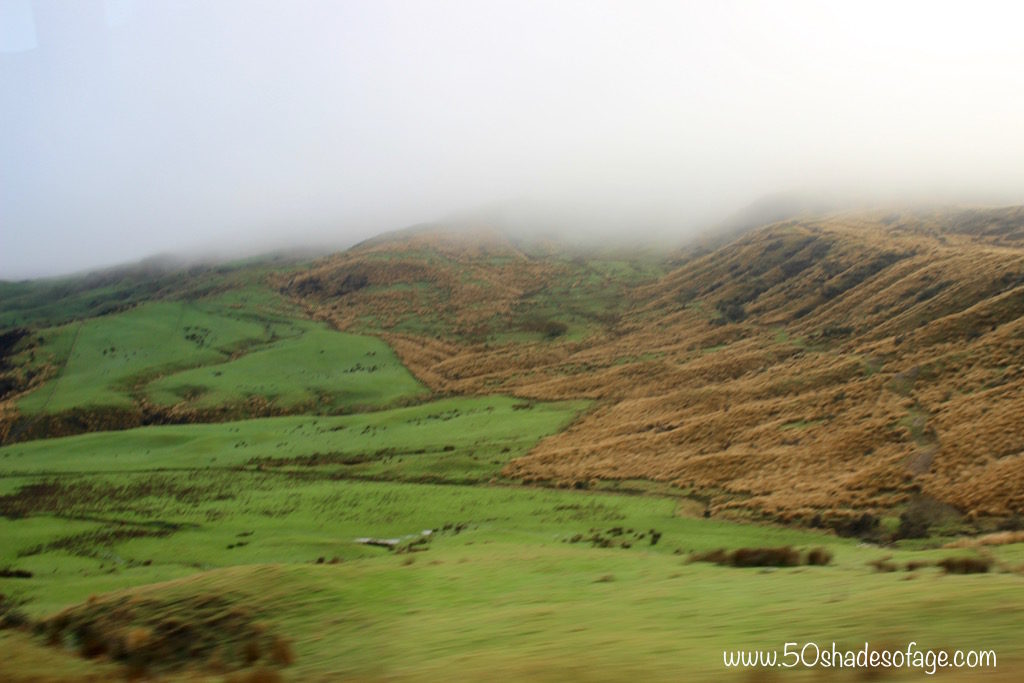 The lush green farmlands with the backdrop of snow-capped mountains, continued through the small towns of Five Rivers and Mossburn. 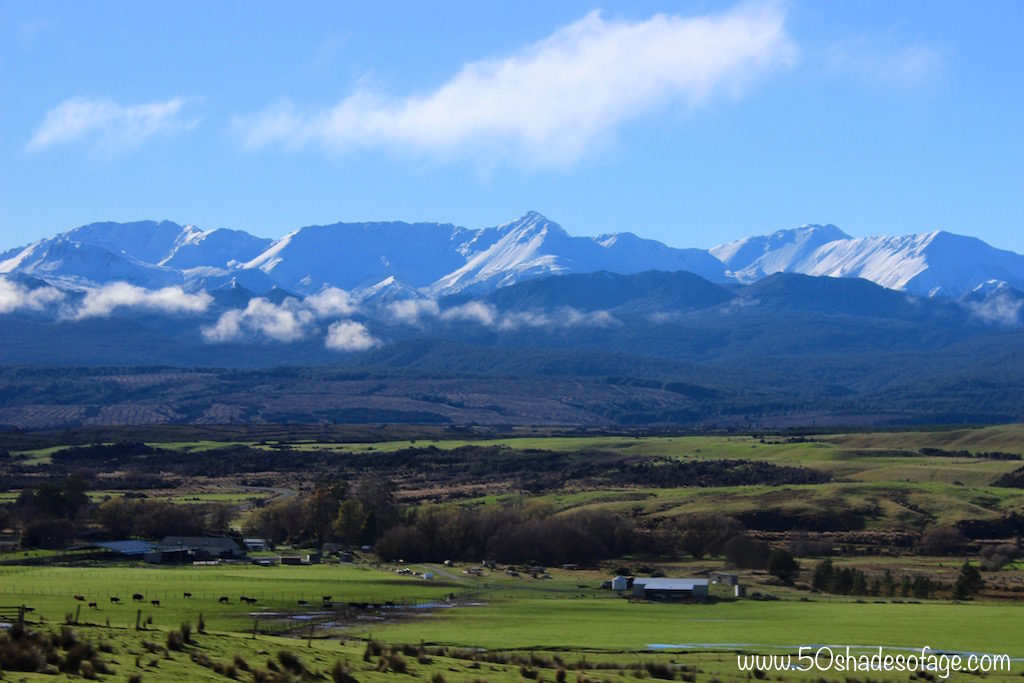 The easy rolling countryside soon leads you to the shores of Lake Te Anau, the biggest of the South Island’s many lakes. Here we stopped for breakfast and a toilet break, plus a quick look around town. On the western side of Te Anau, the long arms of the lake disappear into the looming, densely forested Murchison Mountains. 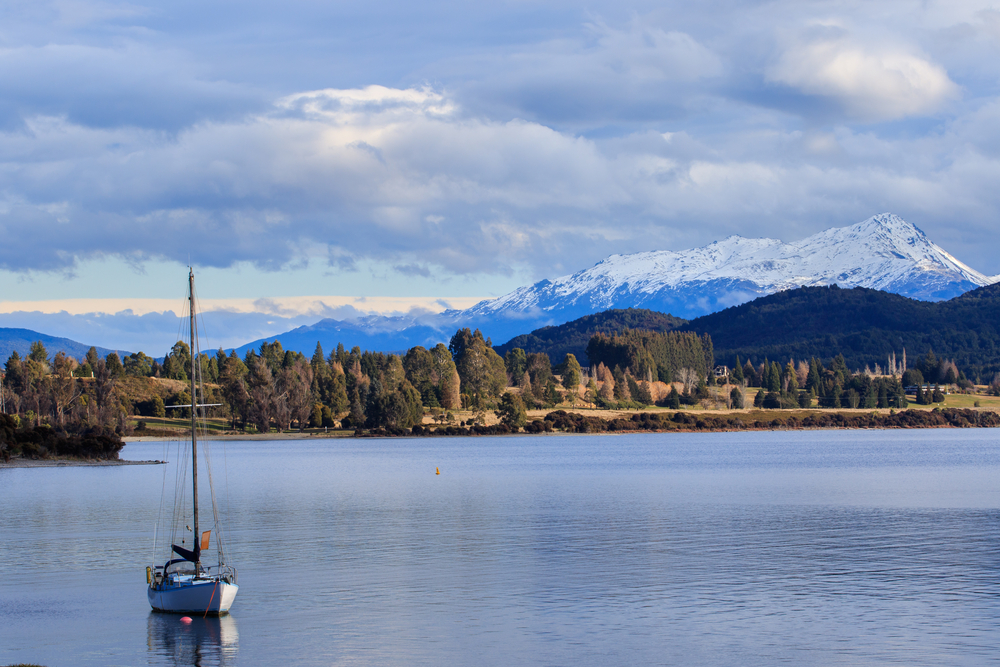 Very soon the gates of Fiordland National Park indicate the start of the amazing Milford Road with towering peaks, tranquil lakes, crystal clear rivers and dense rainforest making this one of the world’s most spectacular drives. 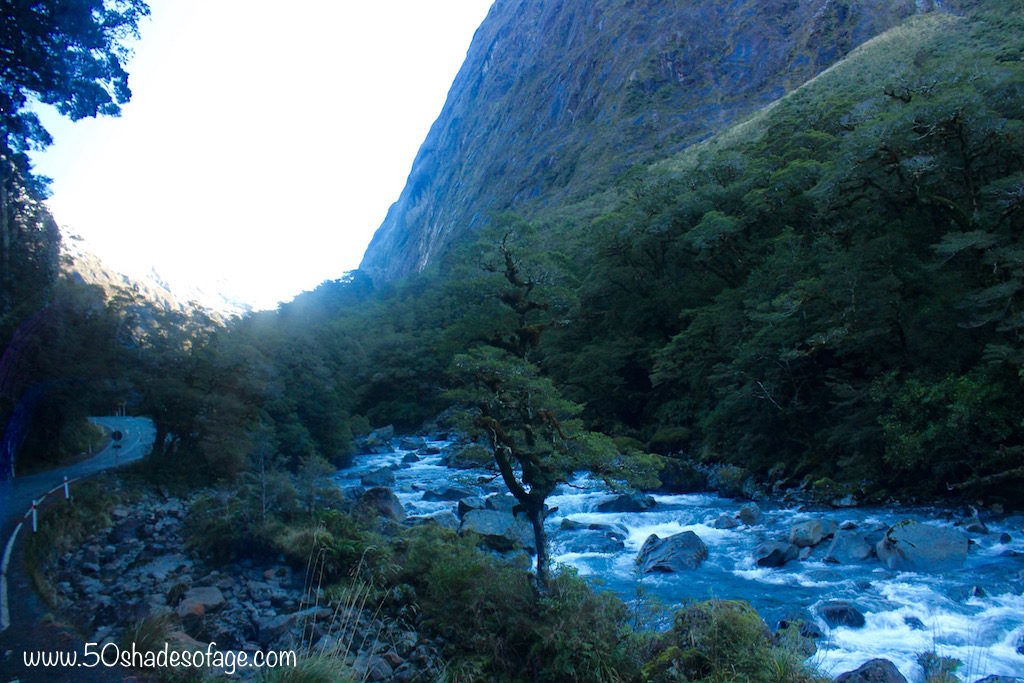 Mountain River on the Milford Road

The road to Milford Sound passes through stunning landscapes including mountain ranges, glacier-carved valleys, clear blue lakes and native rainforest. We stopped at the glacier-carved Eglinton Valley, where the Eglinton river traverses through. 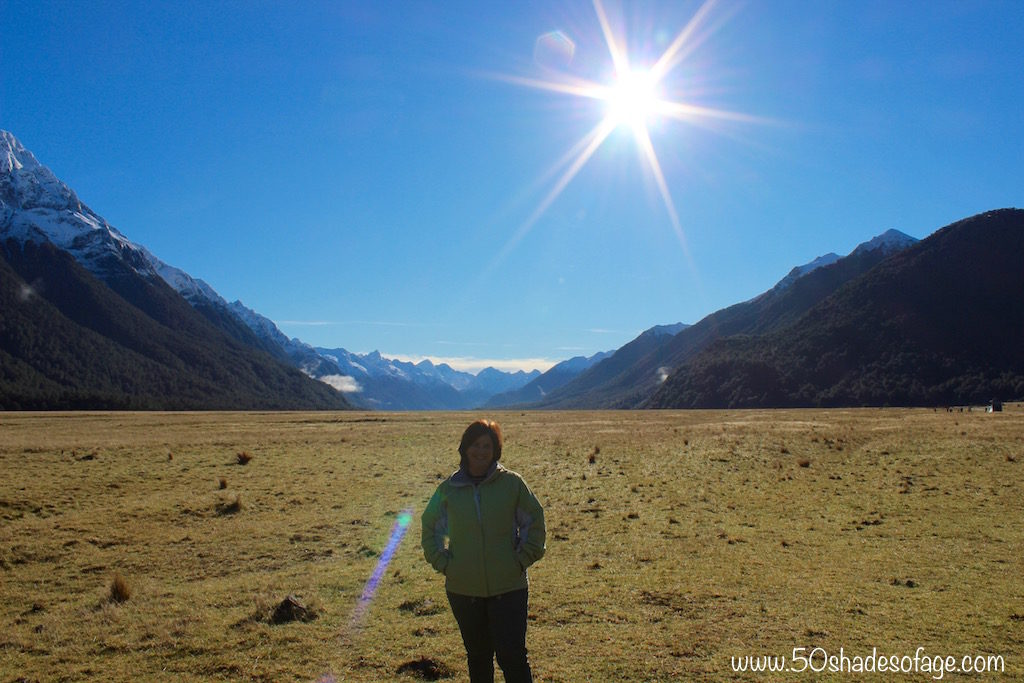 Further on we enjoyed a stroll on the boardwalk around the Mirror Lakes, which perfectly reflects the scenery around it. Very stunning! 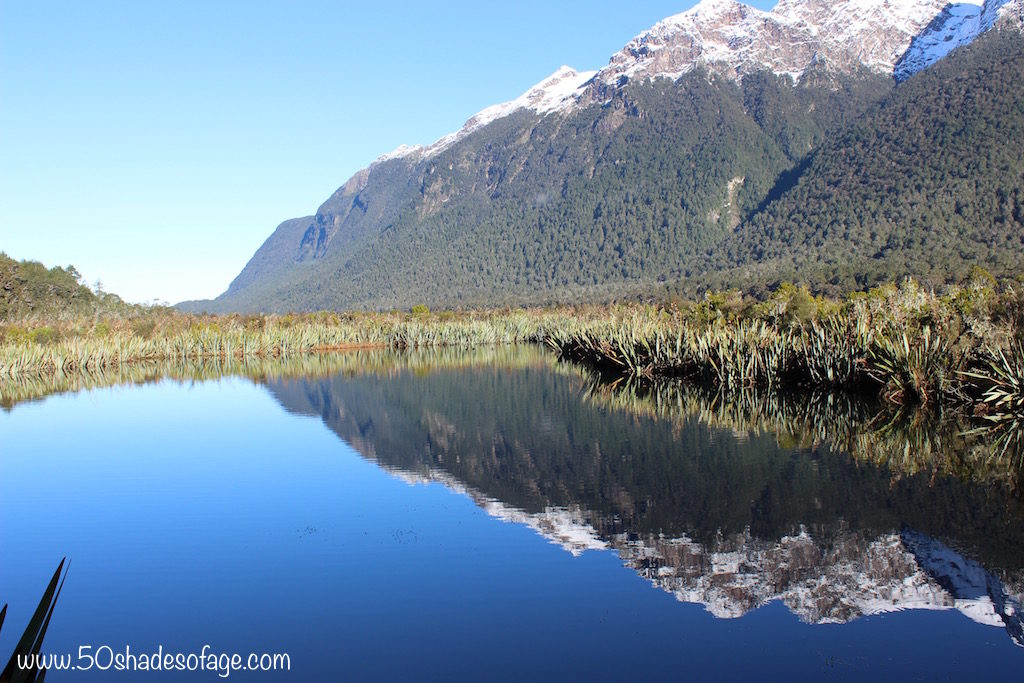 Just before Milford Sound the road travels through the Homer Tunnel, a 1.2km-long tunnel passing through solid rock. 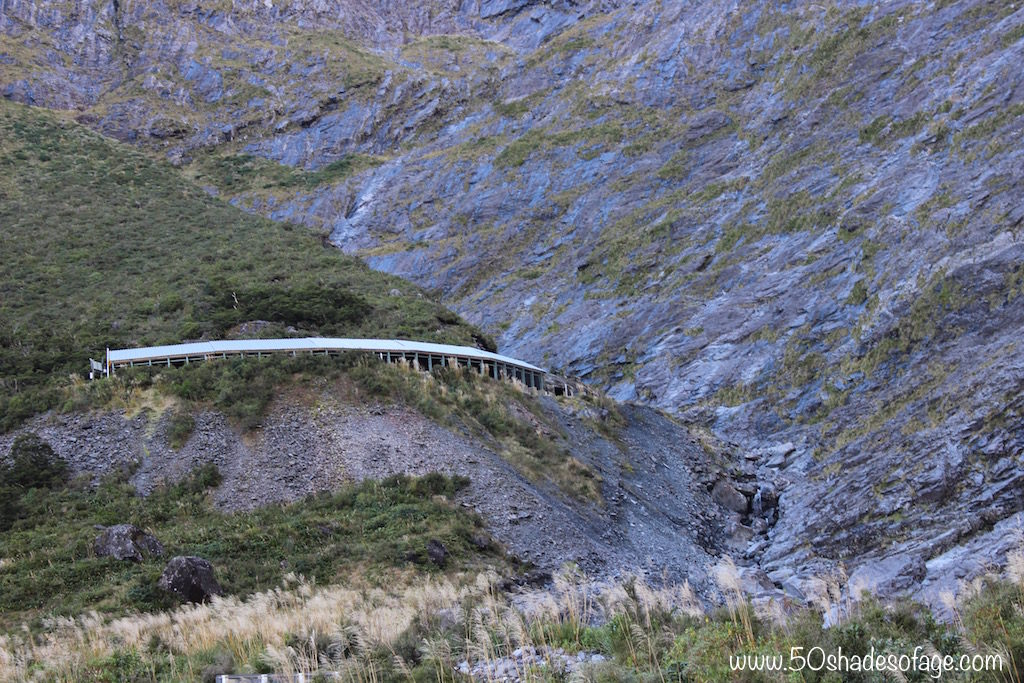 Homer Tunnel through the Pass on the Milford Road 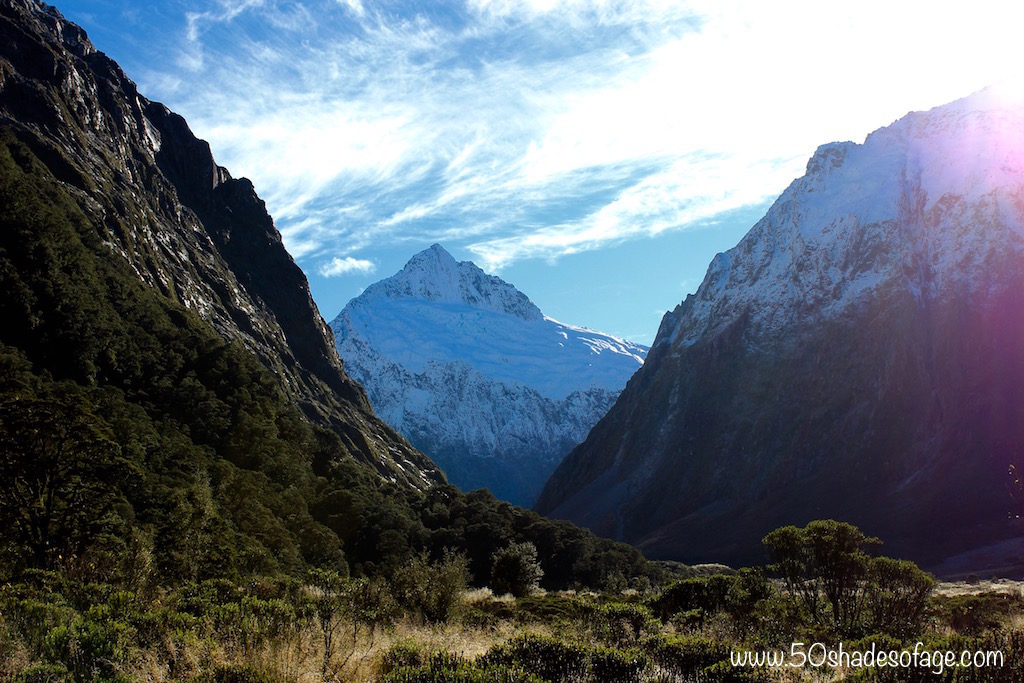 Gorgeous mountain vistas at The Pass

The mountainous terrain of the Darrans is jaw droppingly beautiful which looks almost impenetrable in places. The steep rocky slopes have cascading waterfalls from the snow melting above on the caps. 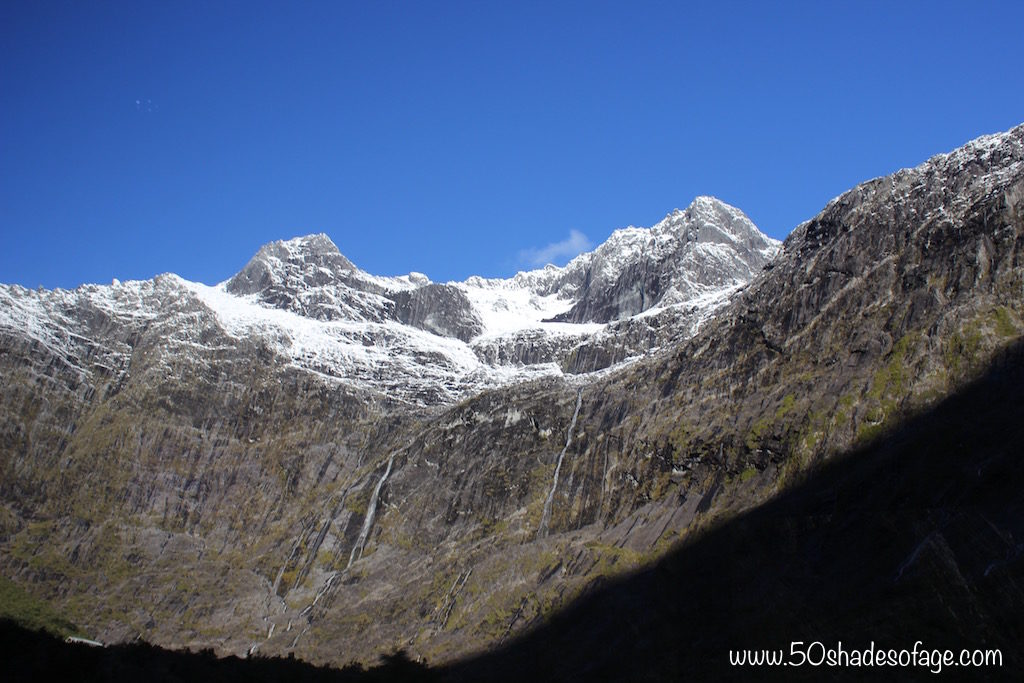 The Chasm, halfway between the Homer Tunnel and Milford Sound; is worth a stop to take a short walk through the forest, and cross footbridges over the Cleddau River, to experience dramatic views of powerful waterfalls and sculpted shapes and basins in the rock, which have been formed over thousands of years by the swirling waters. 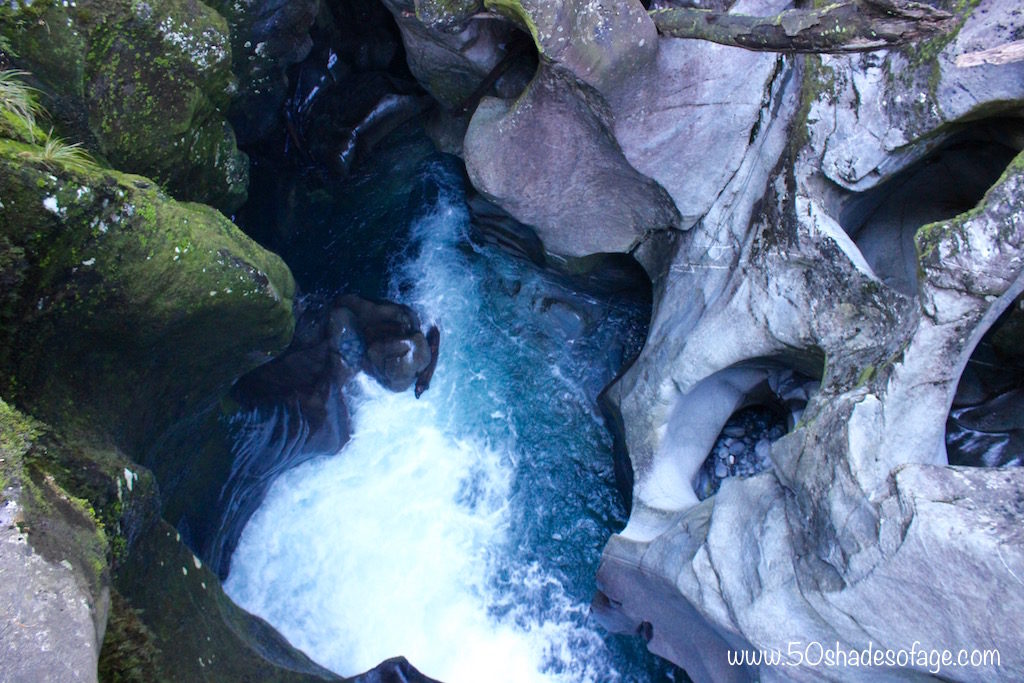 After departing Queenstown in the early hours we finally reached Milford Sound and were quickly hustled aboard our cruise boat for the 16km journey down the length of the fiord to the open sea. 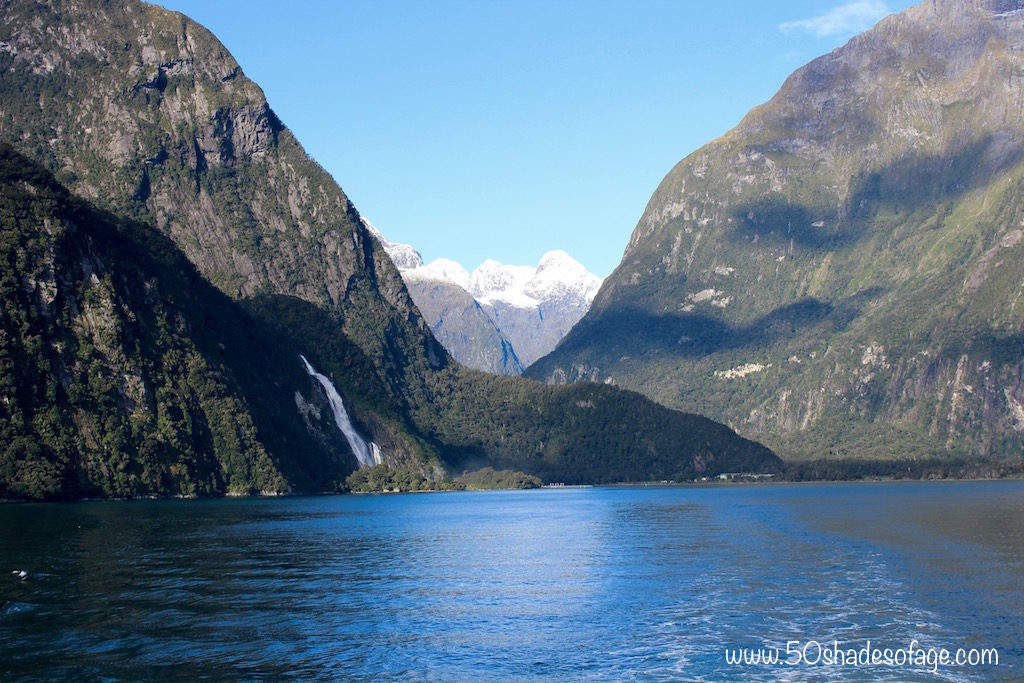 Views down the Fiord

Aboard the Cruise Boat on the Sound

Bounded by steep cliffs and dense rainforest, Milford Sound is by far the best known of all of the fiords in New Zealand, and the only one that can be accessed by road. At the pinnacle of Milford Sound is the iconic Mitre Peak – standing a proud 1,692 metres above sea level, it is certainly an impressive sight to behold. 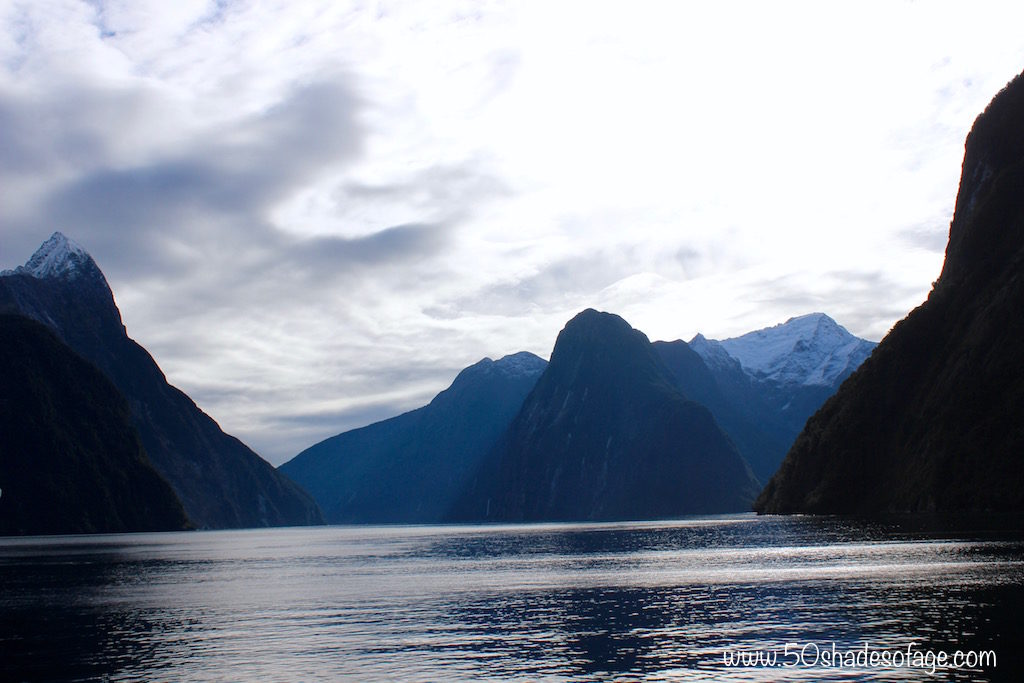 As we cruised down the sound we were treated to a couple of Fur Seals perched on the rocks and then a pod of Bottlenose Dolphins breeching in the crystal clear waters. 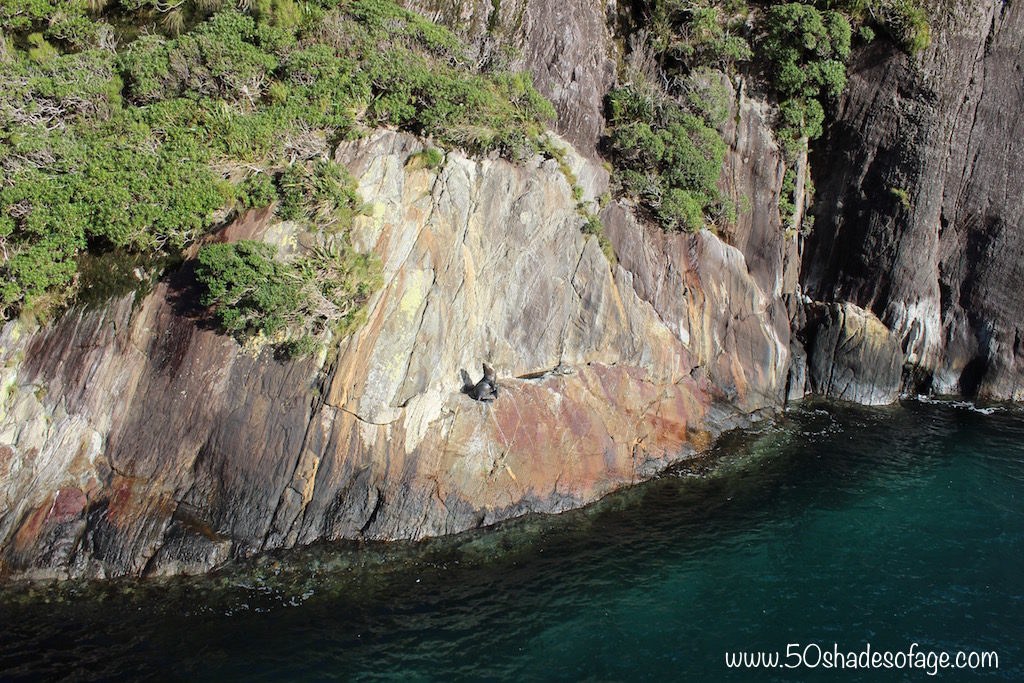 Seal on the rocks at Milford Sound

There are many waterfalls on the mountain sides with the most prolific being the famous Bowen Falls, where the boat edges it way to almost right under the falls. If you are game and don’t mind getting a little wet you can stand out on the stern of the boat for a great photo opportunity right under the falls. 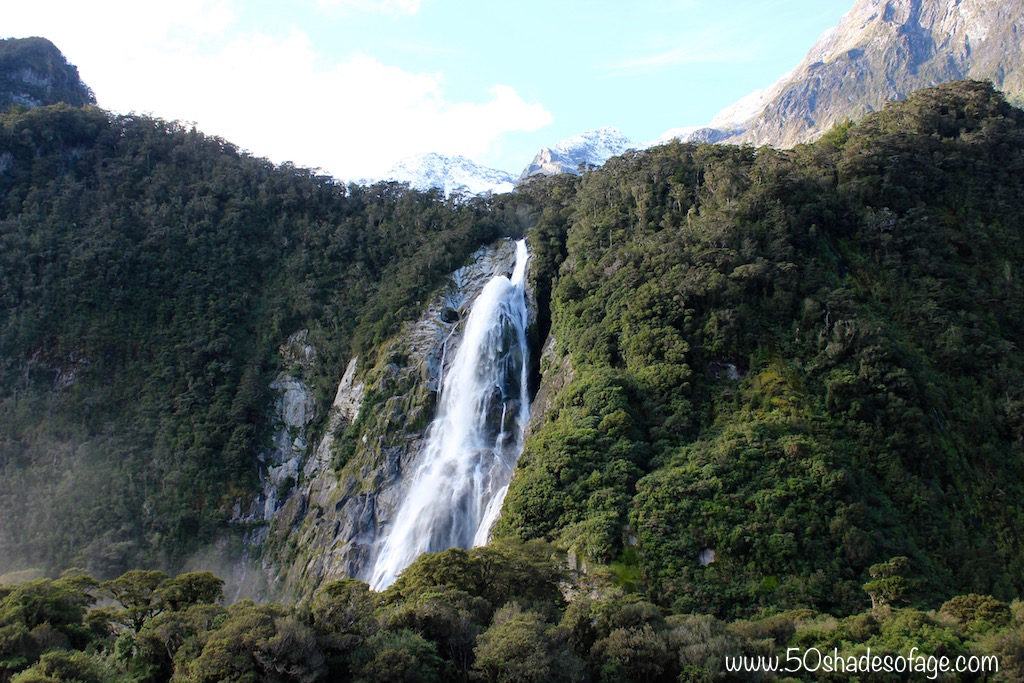 The cruise takes 1 hour and 40 minutes and you can have lunch and a drink aboard whilst enjoying the magical views of the Sound. During the warmer months you can paddle under your own power by going on a sea kayaking tour down the fiord. 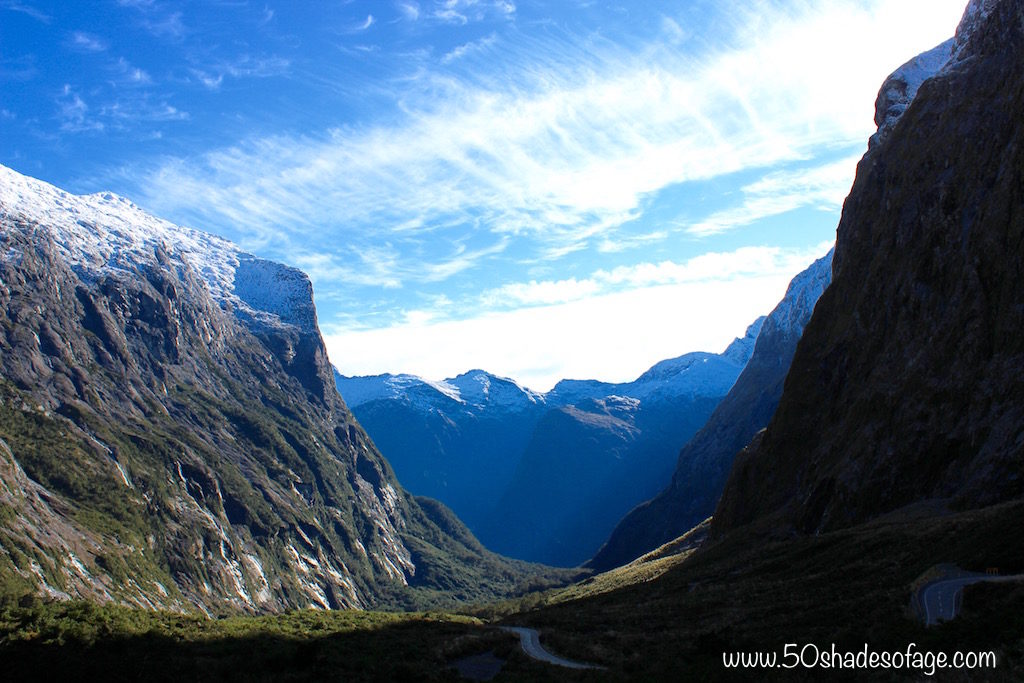 It is such a long drive for such a short cruise, but fully worthwhile for the stunning drive alone. Milford Sound is one of those experiences where the destination is made even better by the journey. However if your budget allows I would recommend driving one way and returning by either plane or helicopter.

Our Milford Sound coach and cruise tour was with Jucy Cruize and cost us around $130 each.

Spread the love
Milford SoundQueenstownSouth Island New ZealandTravel New Zealand
By 50 Shades, July 15, 2016 Kathy was a 50 something year old when she started up this blog 6 years ago, but has since turned over another decade and is now in her early 60s. She is married with two adult children and lives on the Tweed Coast of New South Wales, Australia. Kathy enjoys living life to the fullest and loves to keep fit and active by maintaining a healthy diet and exercising regularly. Some of her interests include reading, photography, travelling, cooking and blogging! Kathy works part-time as a freelance writer but her real passion is travelling and photographing brilliant destinations both within Australia and overseas and writing about it.