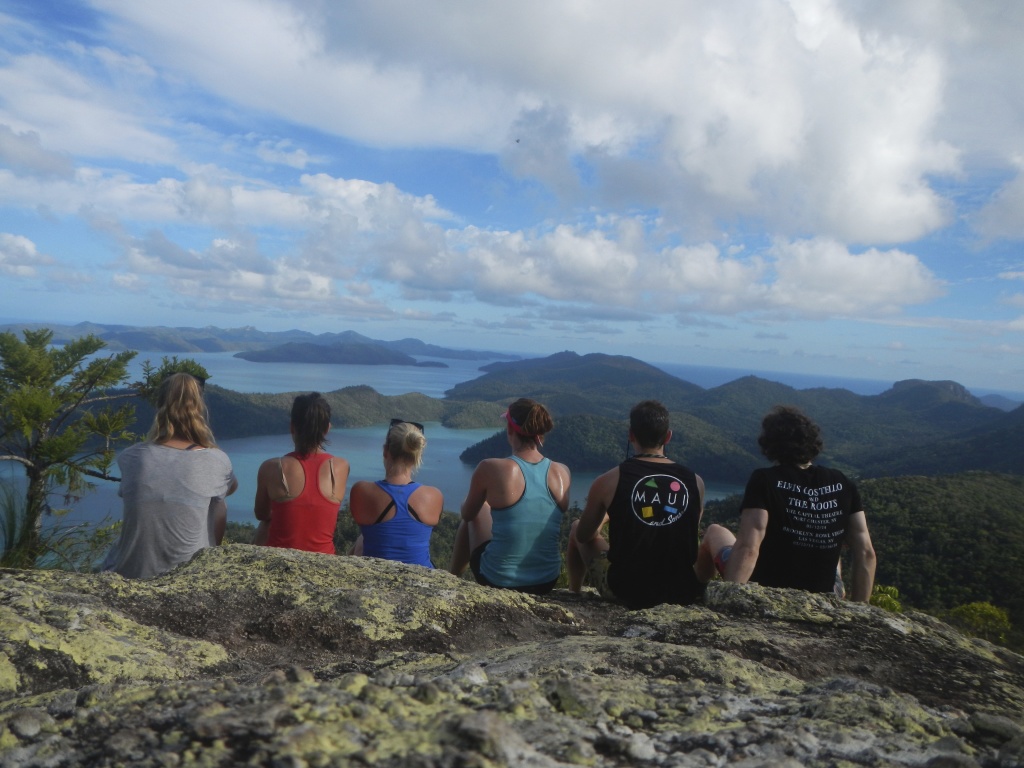 Sailing The Whitsundays whips up all sorts of images in my head such as snow white sandy beaches, tropical palm fringed island resorts, coral ‘bommies’ brimming with tropical fish, the azure blue colour of the water and yachts sailing majestically, winding their way through the 74 islands, that make up the group collectively called the Whitsunday Islands. These group of islands are idyllically located on Australia’s Great Barrier Reef.

It has been 30 years since I last visited this tropical paradise, but the memories of sailing the Whitsundays are still very fresh in my mind. So that is why when my daughter and group of friends set sail on a charter yacht around the islands, I asked them to photograph their journey. 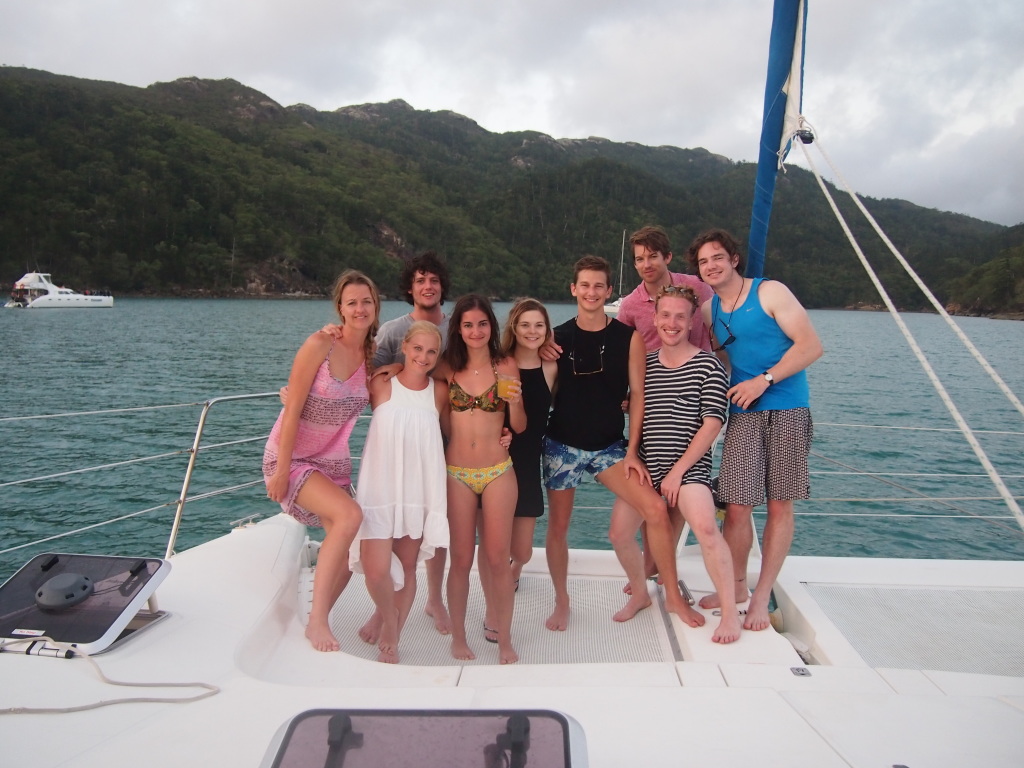 The Gang Onboard The Happy Cat

The journey began at the coastal tourist town and gateway to the Whitsundays, Airlie Beach. It is located roughly on the central coast of Queensland, 1100 kms north of Brisbane and 150 kms north of Mackay.

This is the course that they sailed:

Secluded beaches, fringing coral reefs and distinctive hoop pines complete the spectacular Whitsunday Island picture. Cid Harbour provides a huge area which is sheltered from winds and has 2 popular beaches; Sawmill Beach and Dugong Beach. There is a short bush walk between them and camping at both locations is possible by arrangement with National Parks.

From here you can hike to Whitsunday Peak which has breathtaking views over the surrounding Whitsundays. 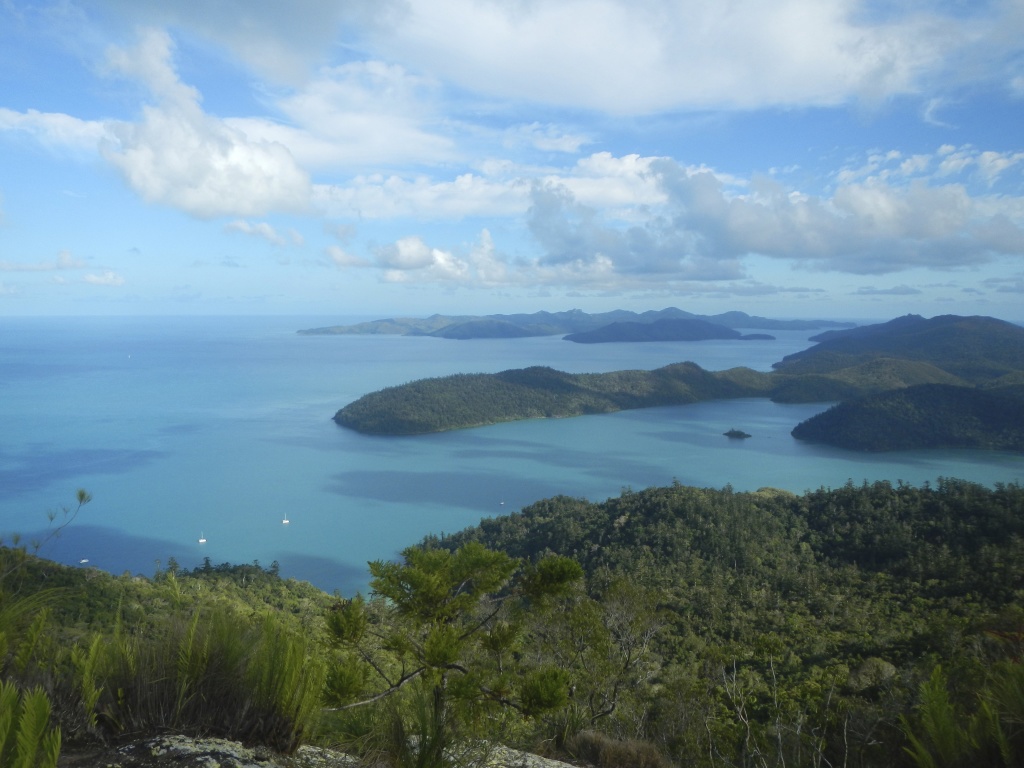 A one kilometre long cosy bay, Butterfly Bay offers safe anchorage for yachts and boats. Snorkelling on the bayside of Alcyonaria Point is particularly good here, which is named for its abundance of coral, or go just off the beach and marvel at the many species of small colourful fish.

If you venture ashore at Butterfly Bay and explore the creeks at certain times of the year, the bush is clouded with thousands of blue butterflies. 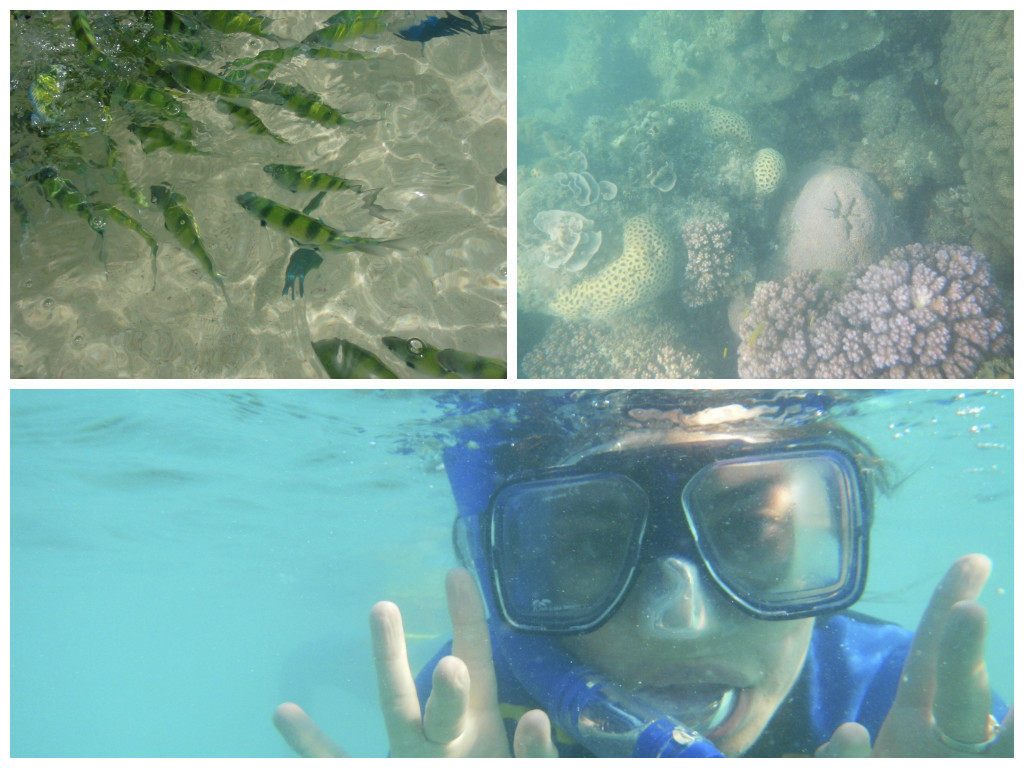 Known affectionately as ‘The Beach’ and rated as one of the top beaches in the world, Whitehaven Beach is the epitome of paradise found. Feeling the powder fine sand beneath your feet and swimming in its turquoise waters with this 3D postcard stretching before you, is an unforgettable experience. 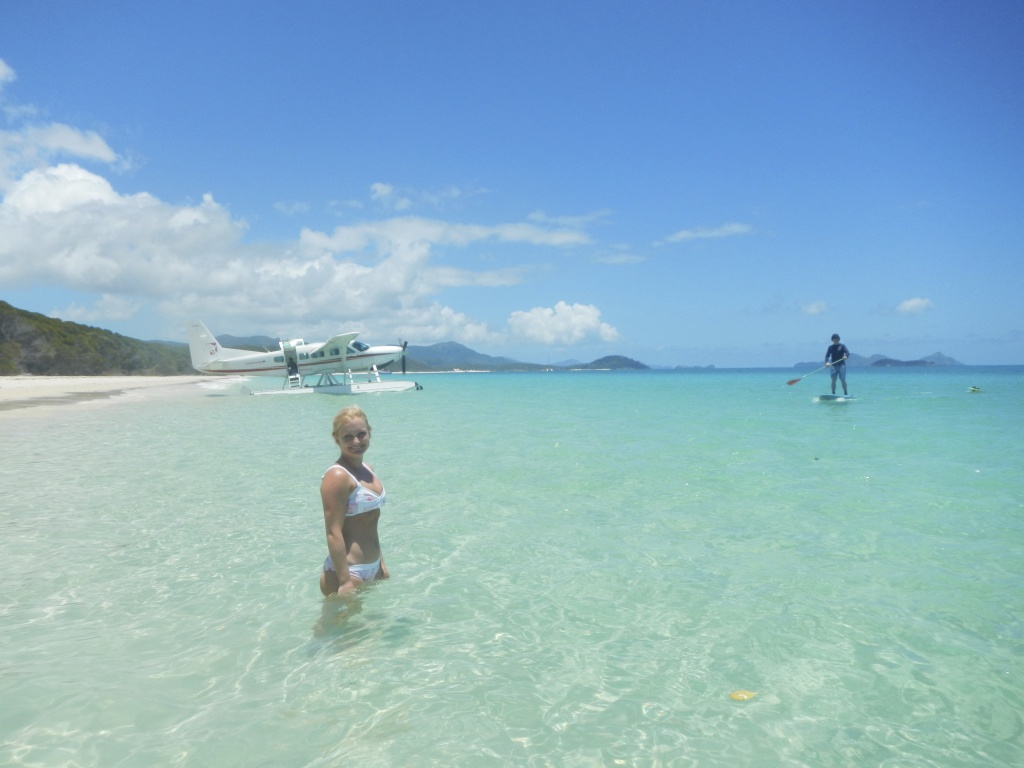 Found on the southern side of Whitsunday Island, is Chance Bay which is a double bay with two beautiful sand beaches. There is good fishing and snorkelling around the reef areas and around the little islet on the western side of the bay. 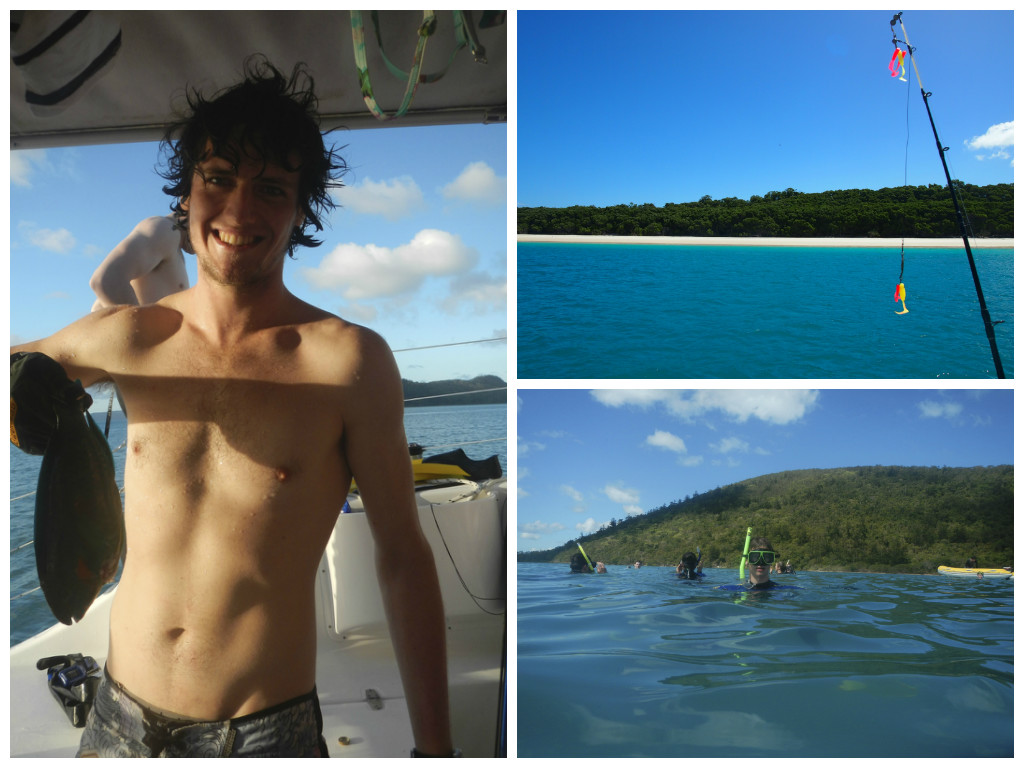 The largest inhabited island in the Whistundays, known as the ‘resort island’, Hamilton Island boasts an Airport, a Golf Club, the Yacht Club, Spa Wumurdaylin, and a host of new or refurbished hotels and resorts. 70% of the island is national park, striking a balance between extensive holiday facilities and the island’s striking natural beauty with spectacular beaches and coral reef. 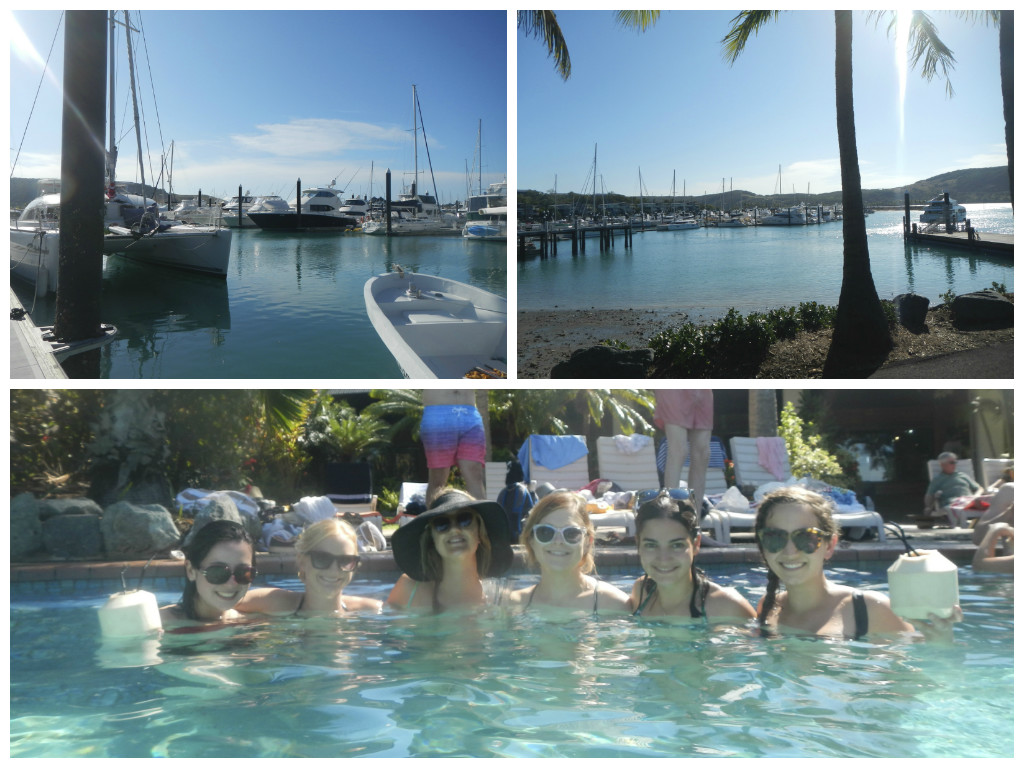 Located at the southern end of Hook Island, Nara Inlet is a deep fjord-like expanse, surrounded either side by magnificent lush green slopes which transcend into the clear turquoise waters and fringing reef.

In the steep wooded hills surrounding the inlet are overhanging caves, which were once Aboriginal shelter caves with some aboriginal cave paintings. A short steep walk to the caves will also bring you to a waterfall and rock pool. 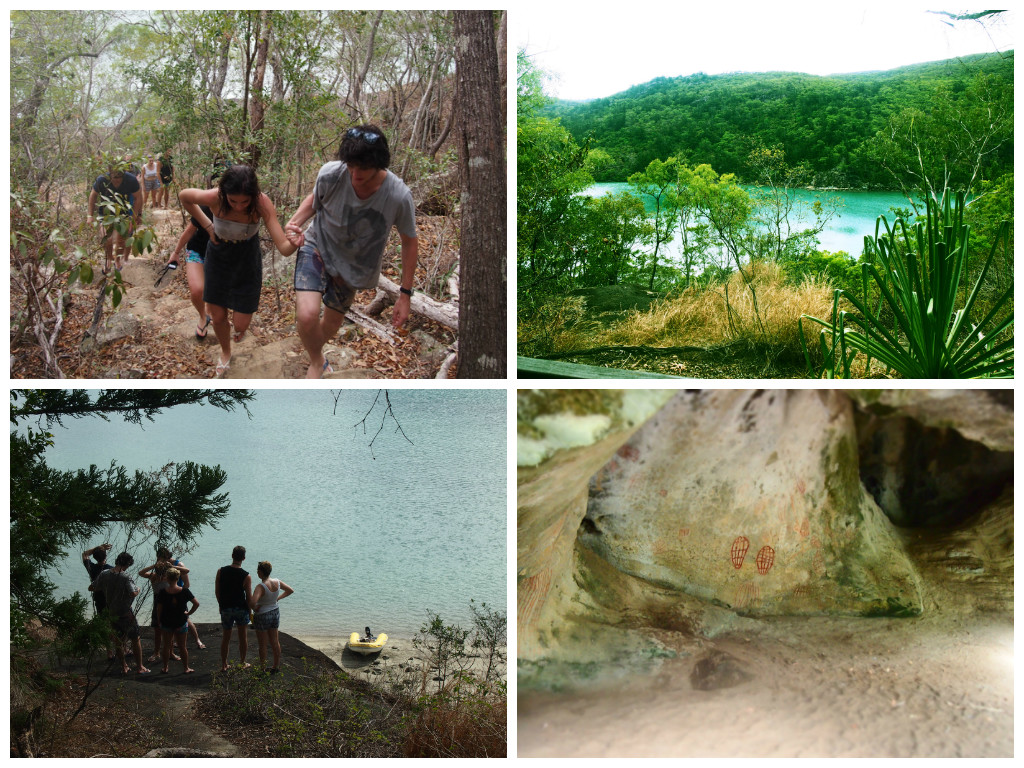 Stop 6 – Back to Airlie Beach

Leaving the safe refuge of Nara Inlet, it was back to port via Daydream Island, to Airlie Beach. In six short days the crew of the ‘Happy Cat’ were able to cover a lot of territory sailing the seas of the majestic Whitsunday Islands.

After a very hectic year the gang described their Whitsunday sailing adventure as being extremely relaxing, jam-packed with fun things to do and breathtakingly beautiful scenery. These pictures say it all. 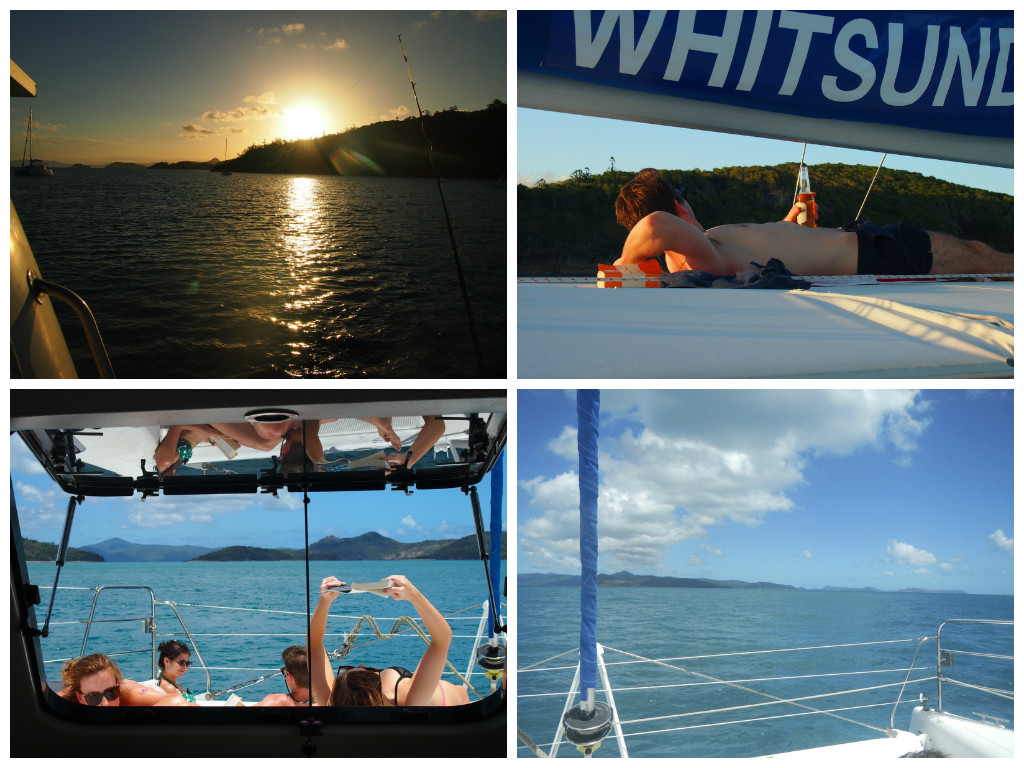 What a magical part of Australia on our world renowned Great Barrier Reef!

Spread the love
Great Barrier ReefHamilton IslandWhitsunday IslandsWhitsundays
By 50 Shades, April 27, 2016 Kathy was a 50 something year old when she started up this blog 6 years ago, but has since turned over another decade and is now in her early 60s. She is married with two adult children and lives on the Tweed Coast of New South Wales, Australia. Kathy enjoys living life to the fullest and loves to keep fit and active by maintaining a healthy diet and exercising regularly. Some of her interests include reading, photography, travelling, cooking and blogging! Kathy works part-time as a freelance writer but her real passion is travelling and photographing brilliant destinations both within Australia and overseas and writing about it.