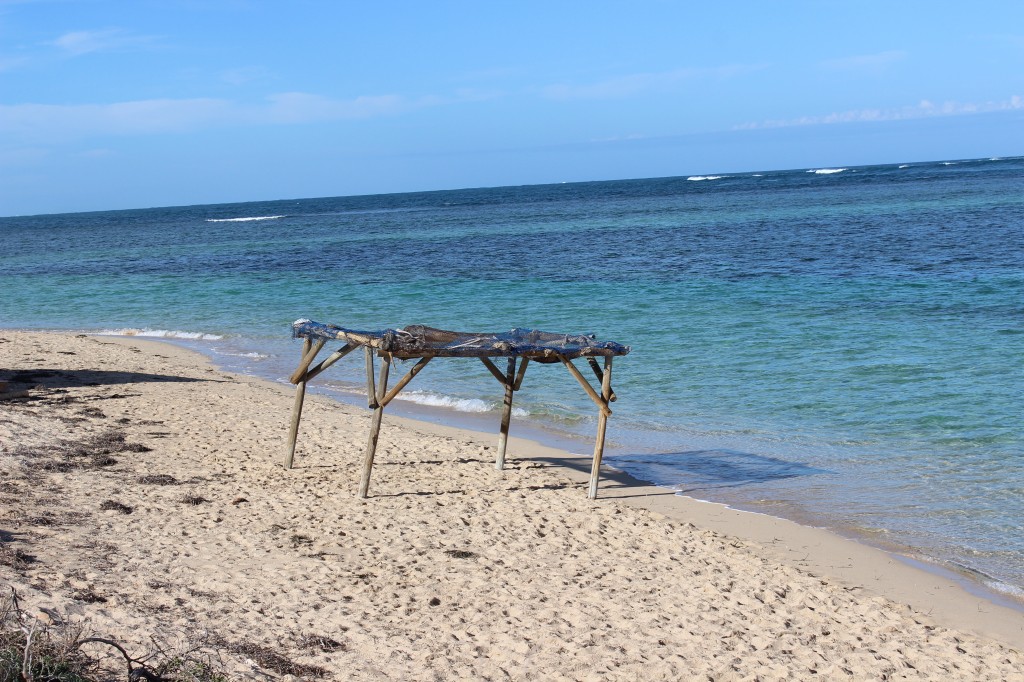 Driving 75 Km north of Carnarvon in West Australia is Point Quobba, a calm coral filled lagoon abundant with fish and shells. It is the southern gateway to the Ningaloo World Heritage area and as such offers visitors the opportunity to snorkel along reef systems and view the amazing colourful sea life such as tropical fish, corals and sea turtles. 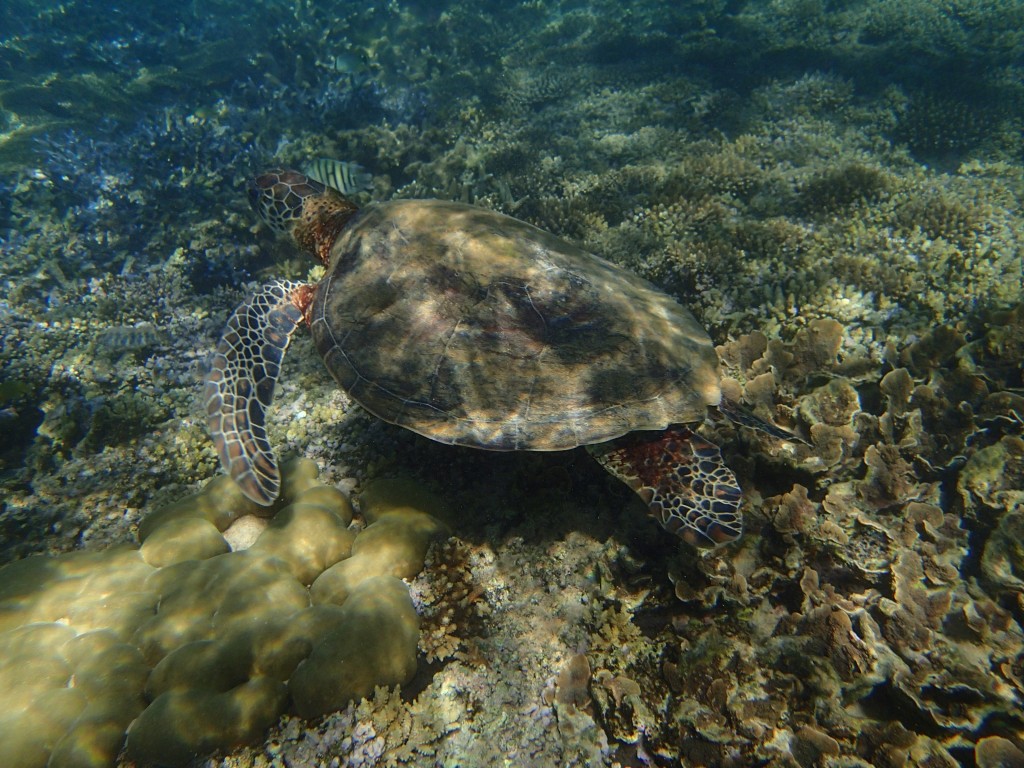 The white sandy beaches of Point Quobba make it a much favoured area for safe swimming, sun bathing and a great family picnic area. There is a fantastic camping area located amongst the coastal sand dunes overlooking the beach which is where we stayed for four wonderful days. 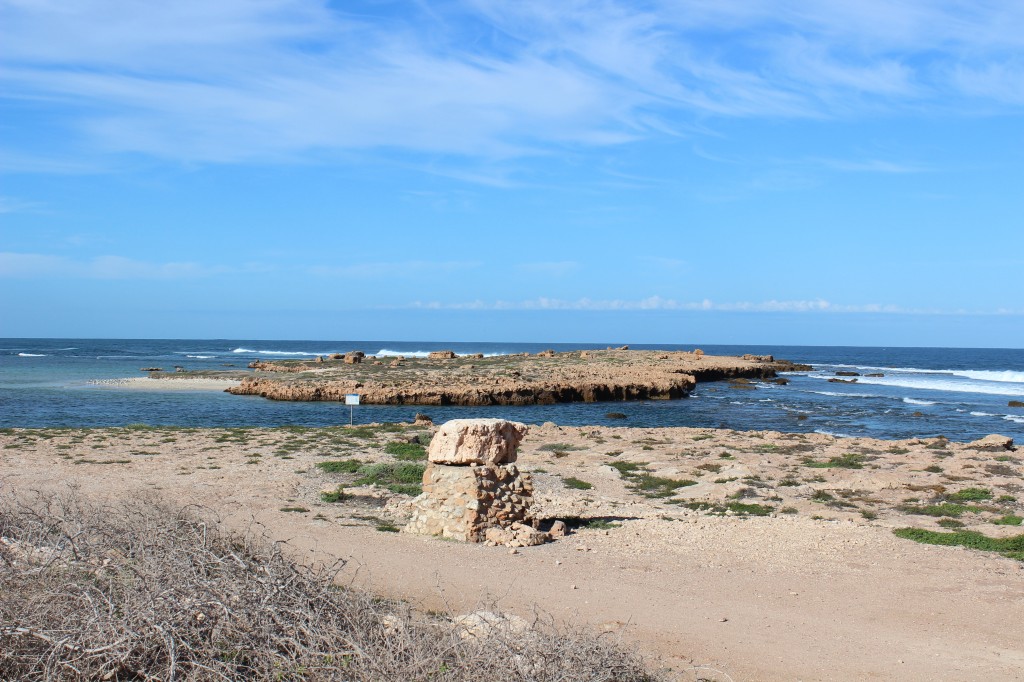 Nearby is the natural phenomenon of the Quobba Blowholes which is caused by powerful ocean swells forcing water through sea caves and up out of narrow holes in the rocks causing jets of water to erupt up into the air. 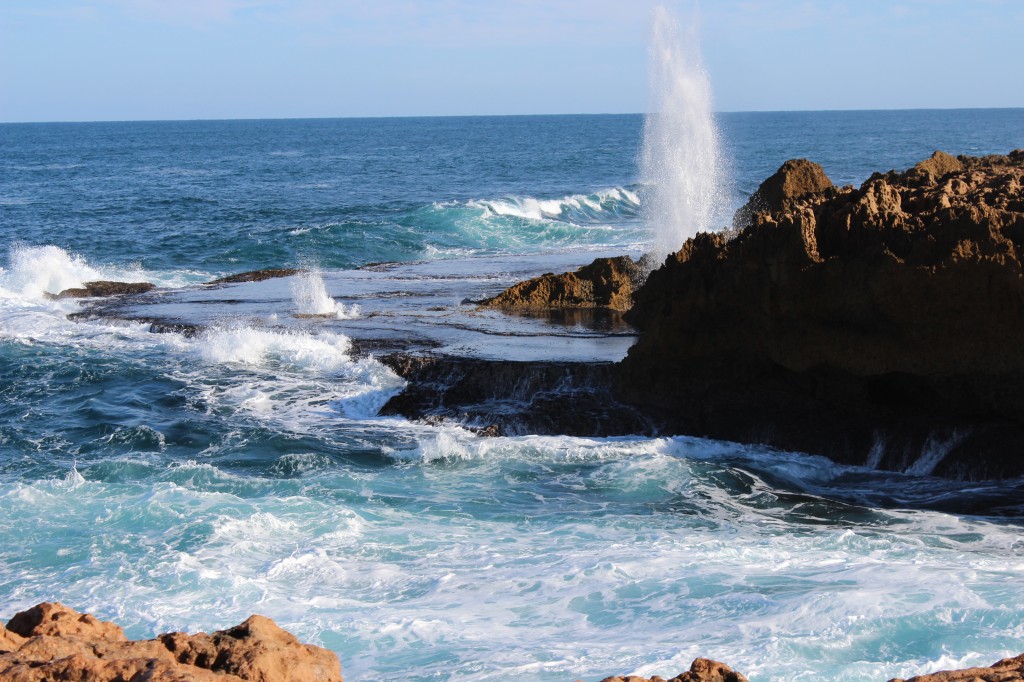 During our stay at Quobba we did a 60 Km day trip to Red Bluff along gravel roads passing by the salt mine operations at Lake Macleod, a huge dry salt lake, along some very rough dirt tracks at times to Red Bluff.  After such a bumpy ride, we were not disappointed when we first caught sight of this remote piece of paradise. There was not only an abundance of beauty on this gorgeous white sandy stretch of beach but marine life leaping out of the clear aqua blue waters. 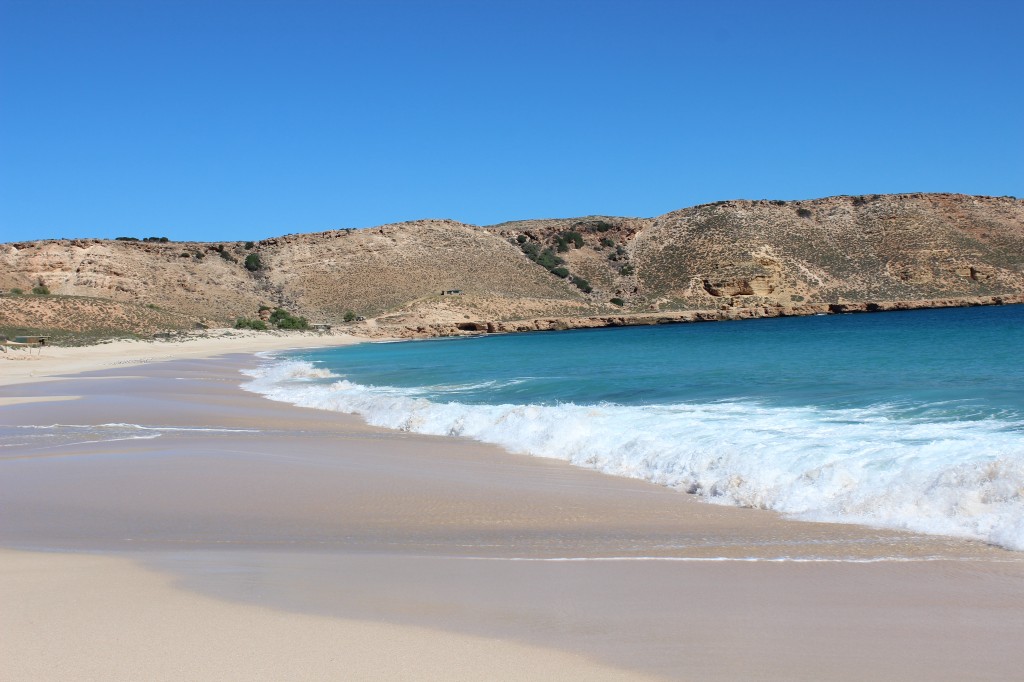 This hideaway is an Eco Retreat like no other. There are luxurious Eco-Safari tents or Seascape Bungalows which have panoramic views over the white sandy beach and turquoise waters. Plus there are campsites available or rustic palm fronded humpies for the more adventurous. So remote and so blissfully magical, that I couldn’t think of a better place to revitalize your mind and body. 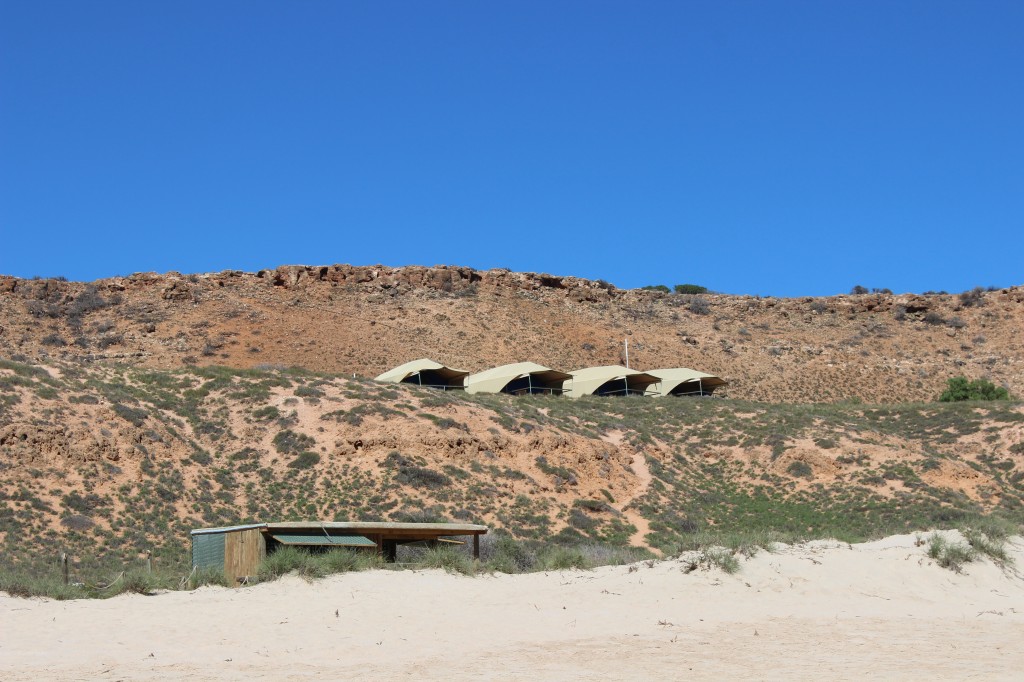 After we took a leisurely stroll along the shoreline we had a refreshing swim and a body surf in the waves of the pristine water that looked so inviting. Afterwards we saw sharks swimming in close to shore and watched some youngsters catching huge Spanish Mackerel fish offshore on a kayak. After talking to the managers of the resort they informed us that sharks were often seen close into shore and that the point break off the bluff was a famous surfing spot known as the ‘Bluff Barrel’ for the dedicated surfers. 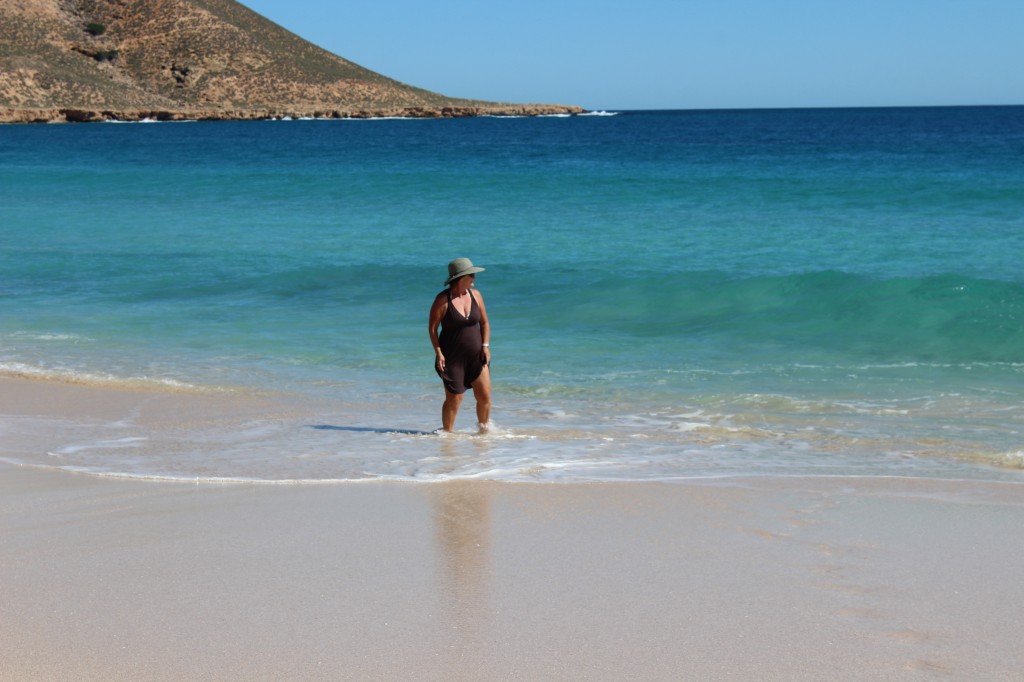 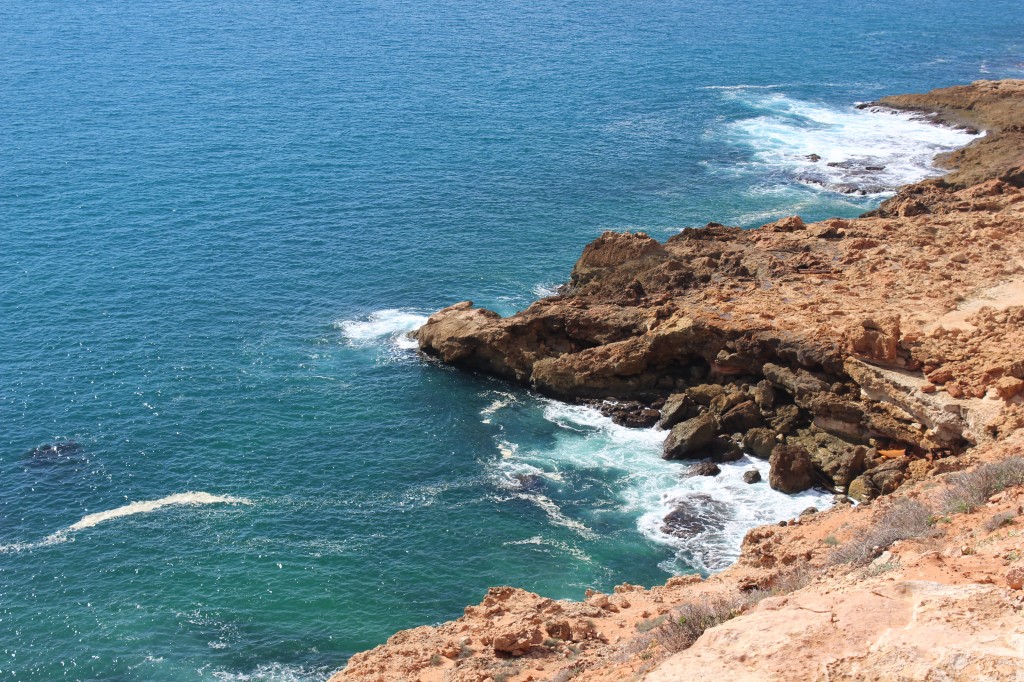 Gnaraloo Station also is a protected nesting site for the local marine turtles that come onto station lands to nest each year.  Camping sites at nearby Three Mile are popular during the winter months as surfers chase the swell of the warmer northern waters. There are also very good snorkelling areas along the Ningaloo Reef systems at Three Mile Lagoon and Gnaraloo Bay. 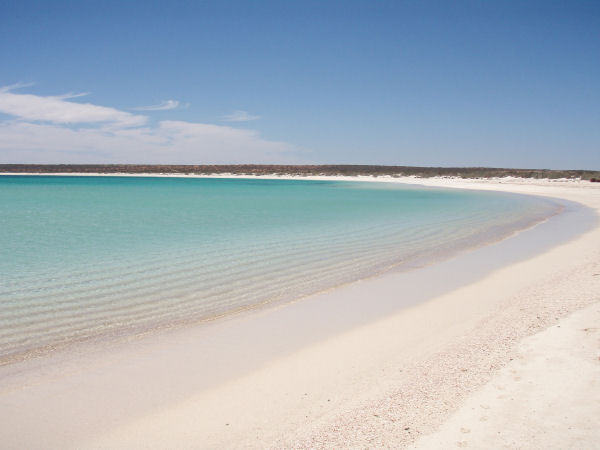 Fishing is extremely popular all the way along the coastline from the Blowholes all the way up the Quobba coastline through to Gnaraloo. Here it is renowned for its ballooning fishing – perhaps the most exhilarating and interesting form of land based game fishing. Bait is attached to a hook on a piece of line on the balloon and it soars into the air where the huge Spanish Mackerel leap as far as 8 feet clear of the water to eat the bait! 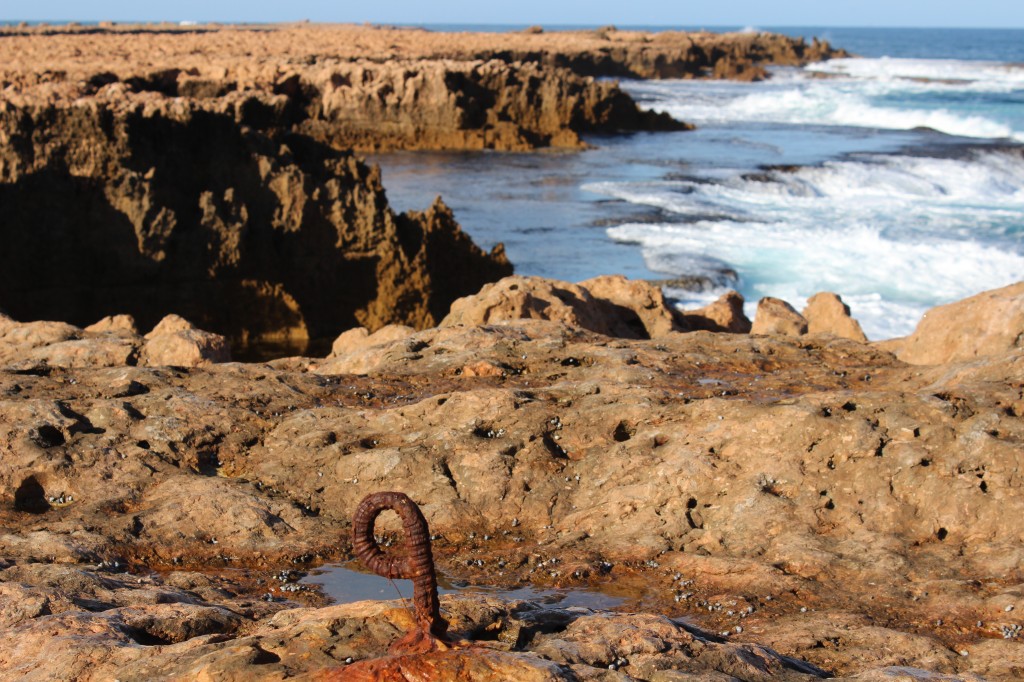 Anchor Point for Fisherman at The Blowholes, Quobba

The Quobba coastline provided me with many wonderful experiences: Adventure, interaction with a bounty of marine species such as sea turtles, endless serene and untouched beaches and the most gorgeous sunsets over the Indian Ocean and clear starry night skies. It made me realize that the more remote and harder to get to places are fully worth the effort. It took paradise to another level!

Spread the love
CarnarvonPoint QuobbaQuobbaTravel West Australia
By 50 Shades, April 20, 2016 Kathy was a 50 something year old when she started up this blog 6 years ago, but has since turned over another decade and is now in her early 60s. She is married with two adult children and lives on the Tweed Coast of New South Wales, Australia. Kathy enjoys living life to the fullest and loves to keep fit and active by maintaining a healthy diet and exercising regularly. Some of her interests include reading, photography, travelling, cooking and blogging! Kathy works part-time as a freelance writer but her real passion is travelling and photographing brilliant destinations both within Australia and overseas and writing about it.