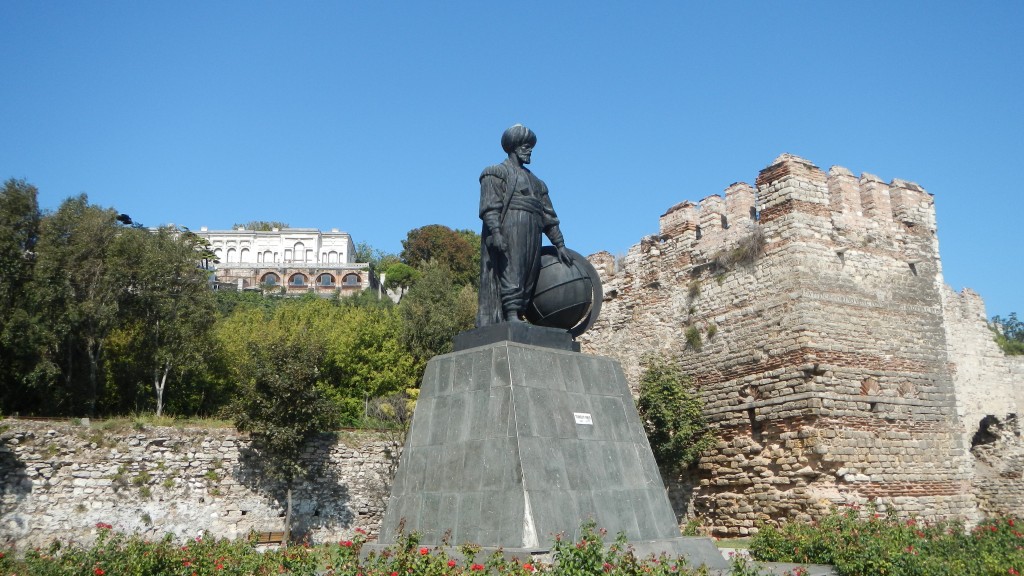 Our son invited us to meet him in Turkey. Turkey travel we asked? Why would we want to go there? Isn’t it dangerous and full of Muslims that are very unwelcoming to Westerners?

Categorically no! It was friendly, beautiful, culturally rich and good value for money. It’s modern enough to be comfortable yet traditional enough to be interesting. I absolutely adored Turkey and would put it up there with many of the ‘must-sees’ tourist destinations!

Our flight via Singapore arrived in Turkey’s largest city Istanbul (formerly Constantinople), straddling the Bosphorus, in northwestern Turkey, between the Sea of Marmara and the Black Sea. The city was founded in 660 BC and has a history as rich as its strategic location on the Silk Road. 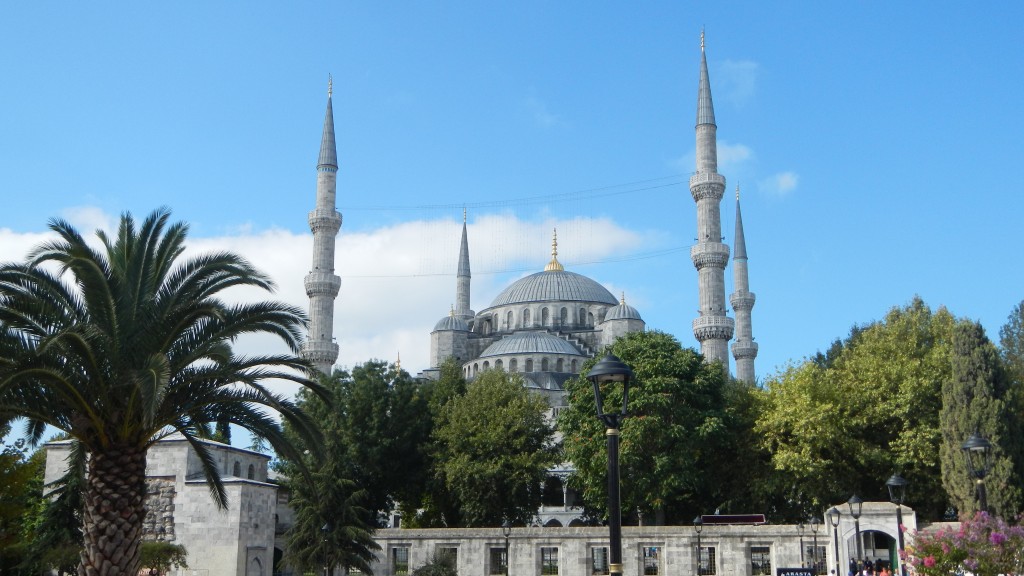 Amongst the many and wondrous places to see in Istanbul are The Blue Mosque, Hagia Sophia, The Grand Bazaar, Topkapi Palace, The Hippodrome, cruise down the Bosphorus River, The Spice Bazaar and Sultanahmet (the Old City).  The city of almost 14 million people is alive and vibrant with quaint narrow cobbled streets in the old sector, and trams that are easily accessible to catch to see the sights. 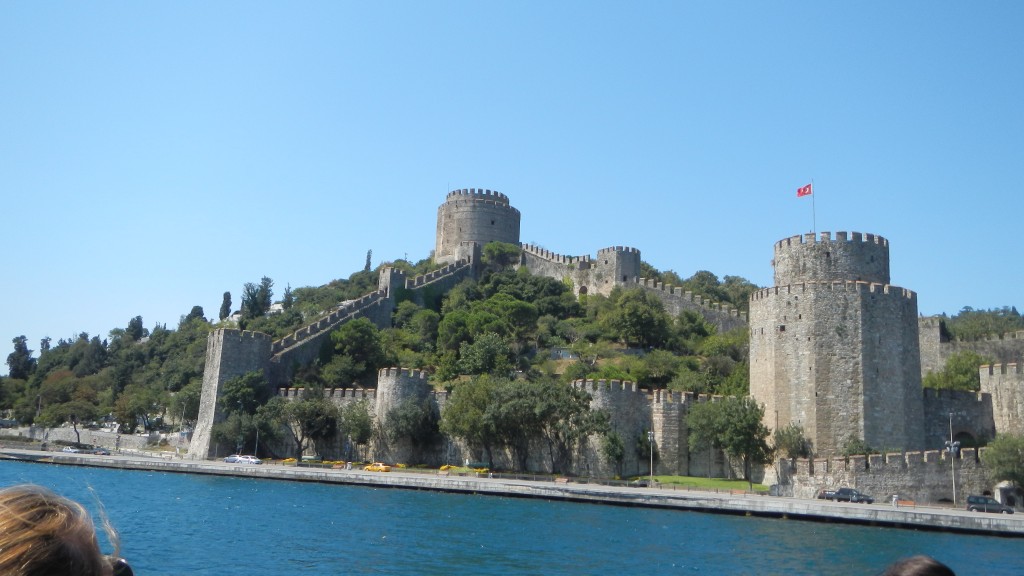 Fort on the Bosphorus River

As for the food I would highly recommend to take some time to just sit at a sidewalk café and sip Turkish tea or coffee, or do what the locals do, and smoke a nargile (water pipe). Dine on savoury Turkish cuisine such as pide (flat bread), pilaf (rice), meze (tapas), kofte (meatballs) and the good old kebab in an excellent Istanbul restaurant or consume a traditional fish sandwich by the Golden Horn on the Bosphorus. All the food is fresh and very tasty! 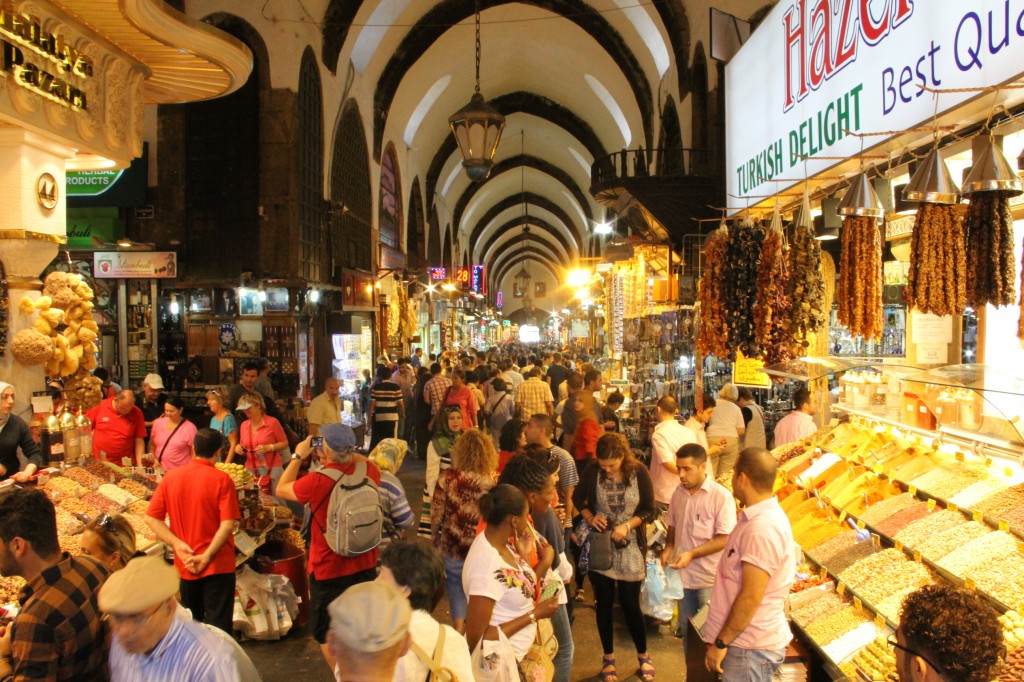 After three days of sightseeing in Istanbul we boarded a bus for a two day tour to the Gallipoli and Troy. Following a five hour journey we arrived at the Gallipoli Peninsula to meet our tour guide, who was an extremely knowledgeable Turkish Professor who had studied the Gallipoli invasion in depth. We took in the vista of the 6 kilometre coastline which was later on renamed Anzac Cove after the heroic soldiers of the allied forces of Australia and New Zealand. 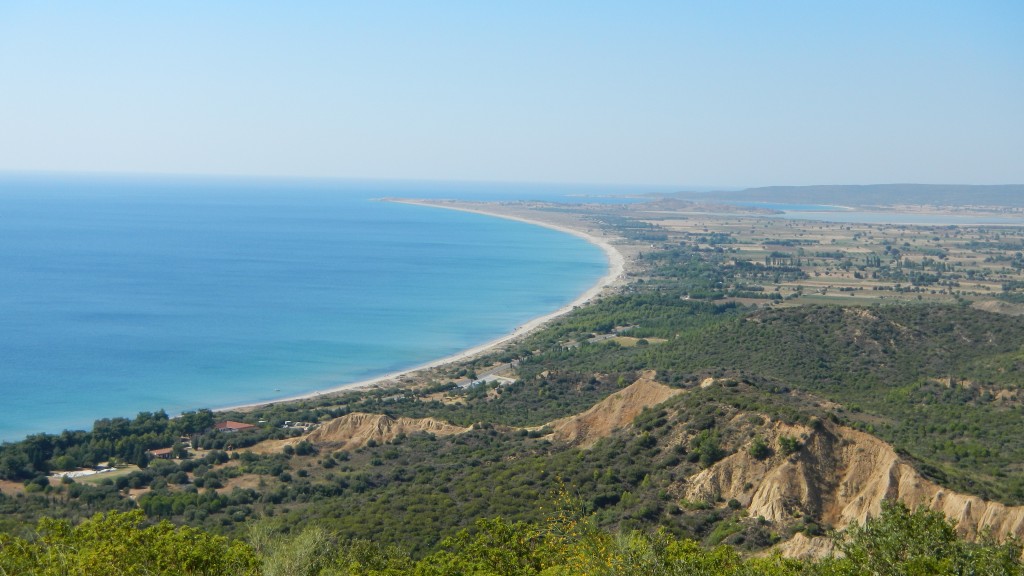 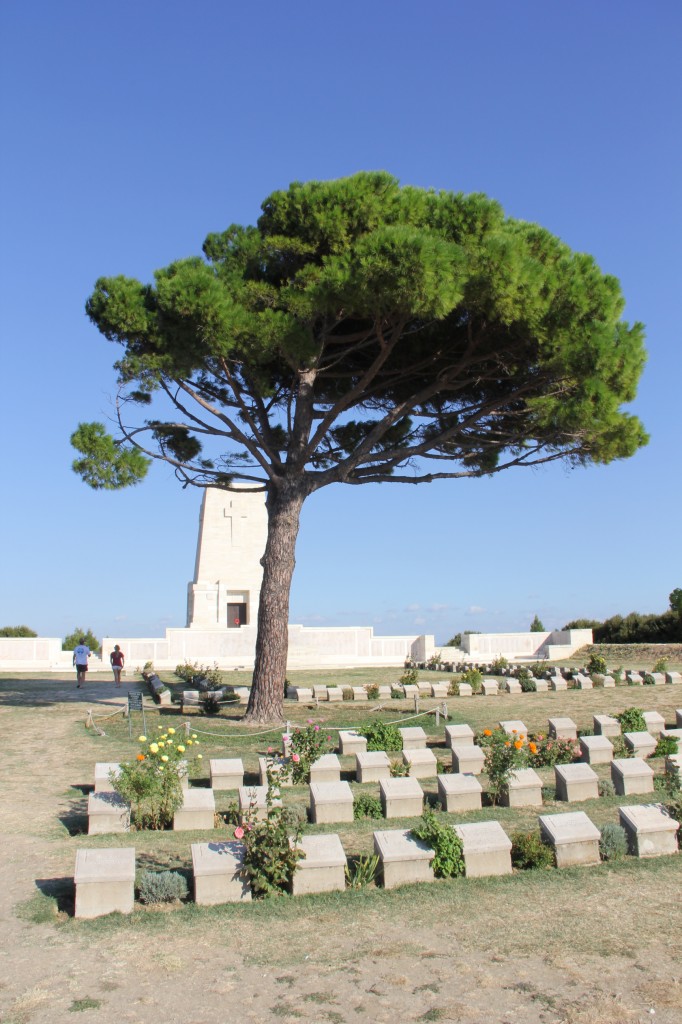 We visited many of the sites where battles occurred and lives were lost senselessly, including the Australian soldiers burial ground called Lone Pine. My Great Great Uncle Horace was killed as he disembarked off the boat at Anzac Cove and his body was never recovered. There is a commemorative plaque with his name on it at the memorial at Lone Pine. It was a very emotional moment for me thinking of how he died so young and innocent in a faraway land. Imagine how tough it was for his family, my great grandparents, having no remains to bury and never really knowing what had become of him?

We continued across the Dardanelles, that is the narrow strait  connecting the Aegean Sea to the Sea of Marmara, we stayed for two nights at the town of Canakkale. This is where most tourists to Gallipoli stay during their visit and is a seaport with a large replica of the Trojan Horse used in the battle of Troy on the waterfront. This was the place that we met up with our son and his girlfriend, who were to be our travel companions for the rest of our trip. 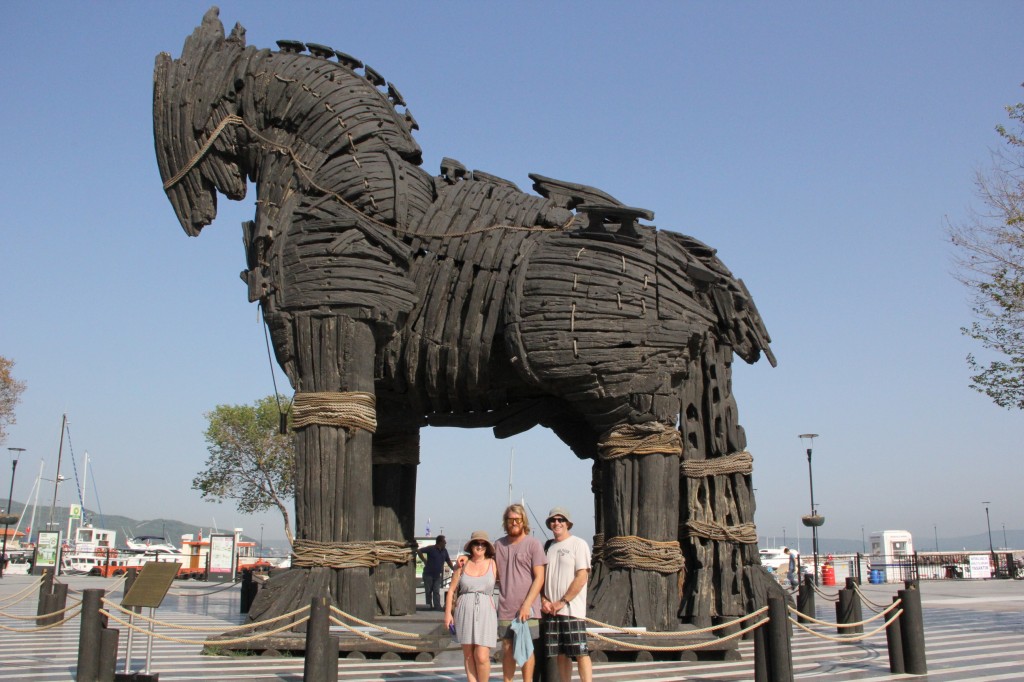 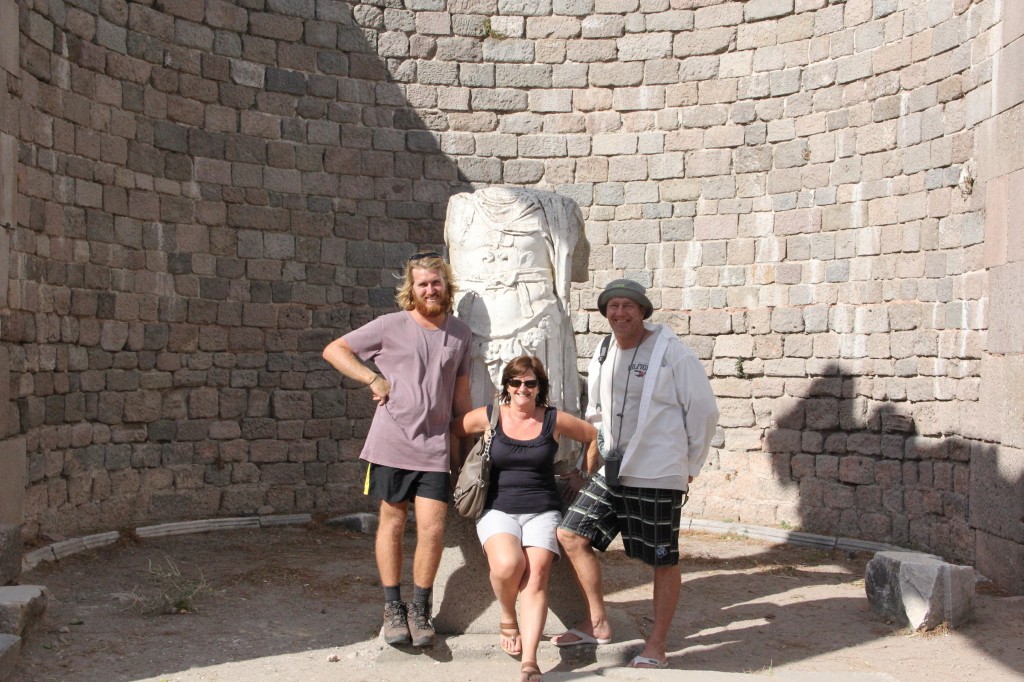 In fact, our host at the very comfortable bed & breakfast where we stayed, told us that Pergamon was the real Troy. He even lent us a book that was written on the subject. Pergamon became the capital of the Kingdom of Pergamon during the Hellenistic period, under the Attalid dynasty, 281–133 BC. It reached the height of its greatness under Roman Imperial rule and was home to about 200,000 inhabitants at one stage. It has a very impressive Acropolis (theatre), temple and roman baths. 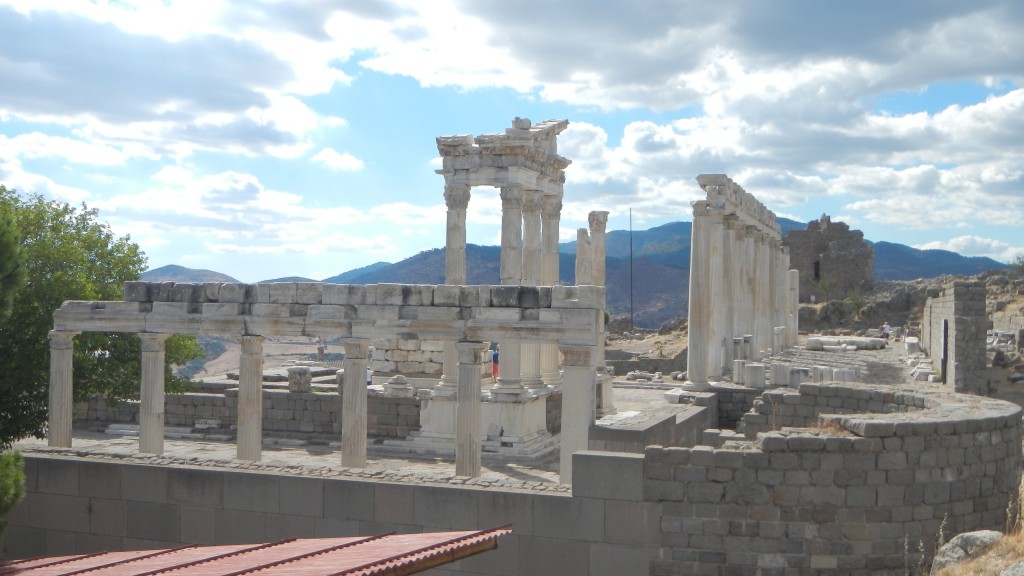 Further down the coast we came to the picturesque port of Kusadasi where the cruise ships come in by the hundreds to visit the very well preserved ruins of Ephesus. We trekked up to the very steep hill overlooking the port that afforded the most breathtaking views of the town. Kusadasi has fabulous shopping, catering to the thousands of passengers coming off the cruise ships daily. There are great leather goods (the best knock-off leather handbags and purses I have ever seen), colourful ceramics and Turkish hand woven rugs in various designs. 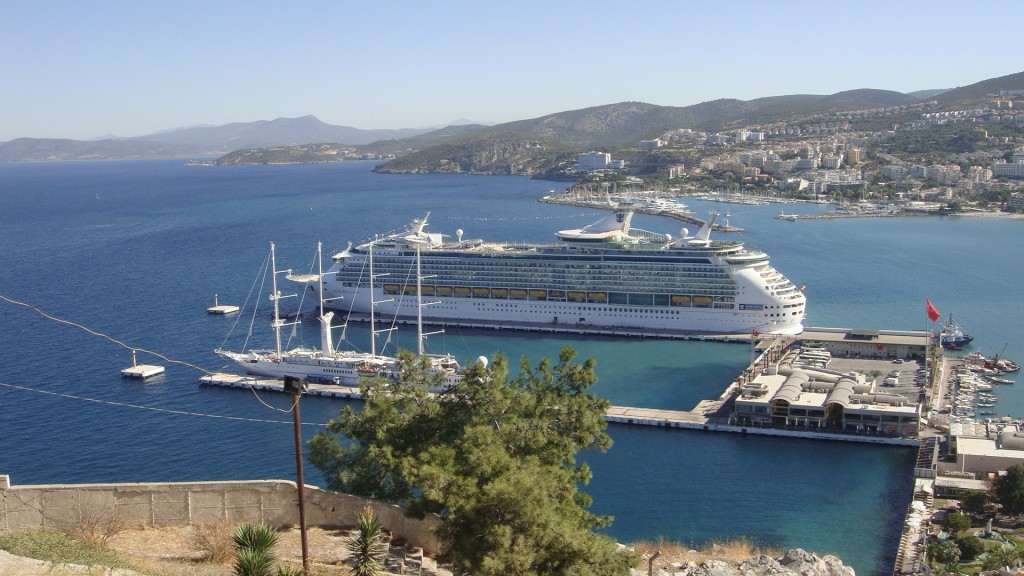 Ephesus was an ancient Greek city, which later became a major Roman city, located on the coast of Ionia, near present-day Selçuk. It contains the largest collection of Roman ruins in the eastern Mediterranean, with only an estimated 15% being excavated. The ruins that are visible give some idea of the city’s original splendour, with a large Acropolis (Theatre) that seats 24,000 and is believed to be the largest outdoor theatre in the ancient world. Probably the most photographed structure of the ancient city is the Library of Celsus, the façade of which has been carefully reconstructed from all original pieces, it was originally built c. 125 AD. 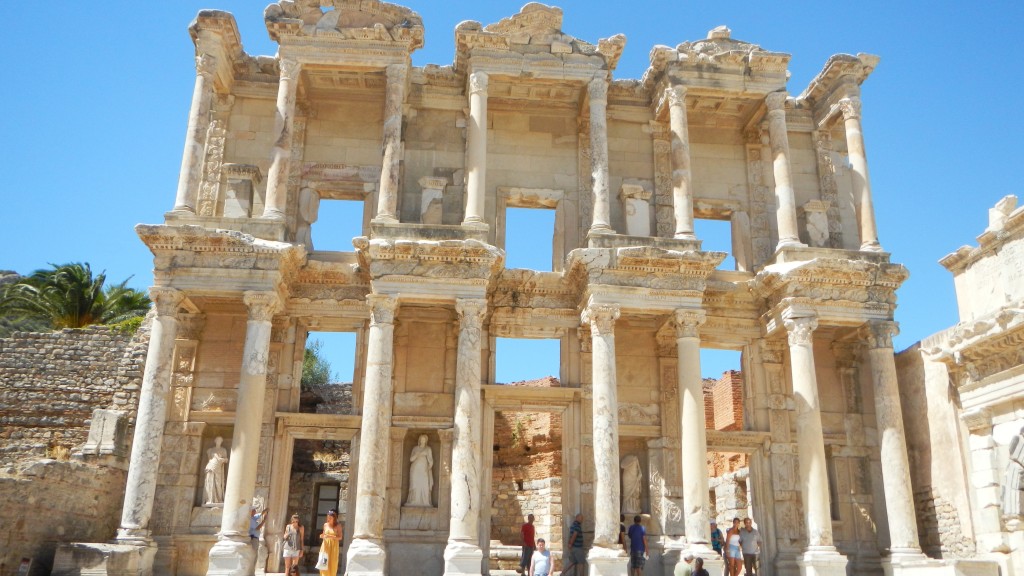 We arrived at the vibrant resort town of Bodrum and spent two days enjoying the beaches, many bars and restaurants.  The town with a population of 136,000 is historically significant for housing the Mausoleum of Mausolus, one of the Seven Wonders of the Ancient World and Bodrum Castle, built by the Knights Hospitaller in the 15th century. The castle grounds include a Museum of Underwater Archaeology, overlooking the harbour and the marina. Bodrum is a playground for rich Turks and foreigners with both a large marina and a beach lined with beach bars and restaurants. It really comes to life of a night time with an array of nightclubs on offer for the many young tourists that visit the resort town. 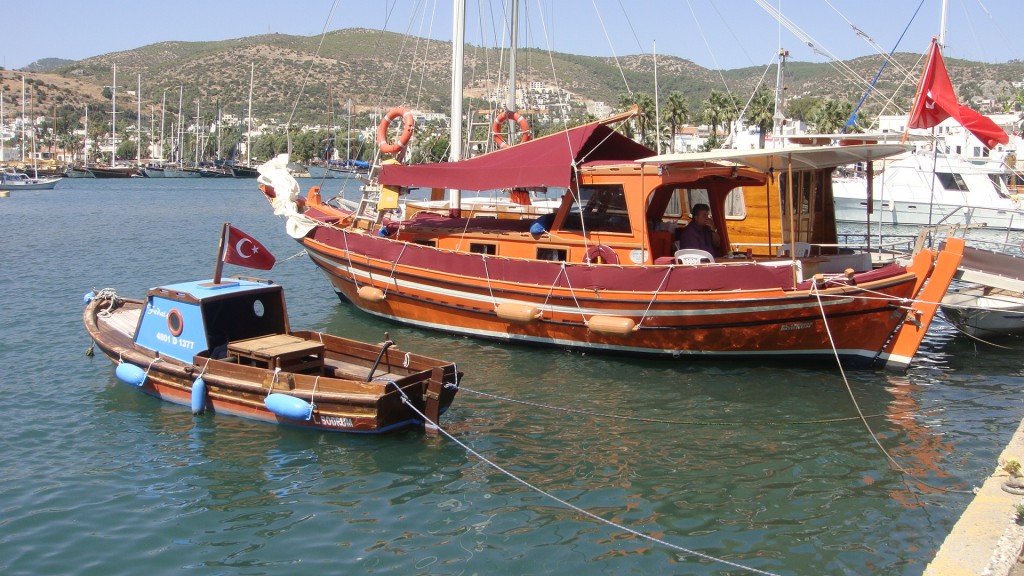 Further down the coast we spent a few days at Kas, a small fishing, diving, yachting and tourist town in the district of Antalya Province, 168 km west of the city of Antalya. As a tourist town it is relatively unspoilt, and we considered it to be the most magical little place we visited during our stay. It was the most charming town with its blue blue sea and narrow streets scented with jasmine flowers. There are plenty of little guest houses, quiet cafes serving home cooking, or small bars to relax after a day’s  snorkelling or scuba diving. Our son and his girlfriend enjoyed a day of scuba diving just off the coast of Kas and said it had some of the clearest waters they had ever dived in with some interesting artificial wrecks, and an abundance of marine life to see. 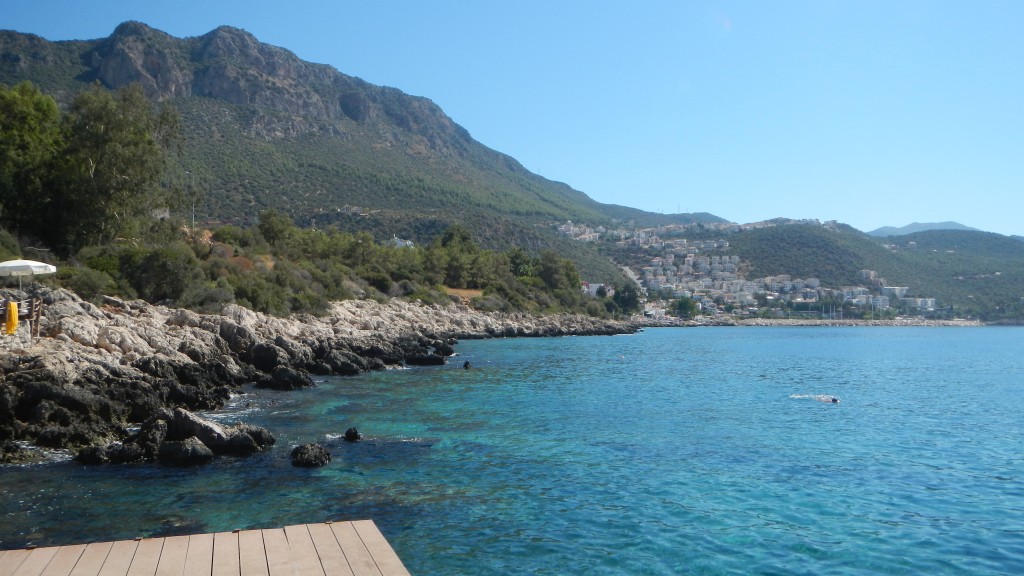 After two relaxing days in Kas, we met up with the parents of our son’s girlfriend and we all boarded a yacht cruise called Before Lunch Boat Cruises, http://www.beforelunch.com, in Fethiye, that funnily enough is co-owned by an Aussie. We cruised out to the beautiful Islands of Gocek in the Mediterranean Sea for four idyllic days. Whilst aboard we enjoyed delicious local cuisine that was meticulously prepared by our Captain/Chef, Ahmed. We spent our days on the comfortable sunbeds on deck and snorkelled and swam in the crystal clear water. We enjoyed two hikes on two different islands, to the Unknown Temples and the Lycian Rock Tombs, both giving stunning hilltop views over the sea. Definitely lots of stunning photo opportunities! 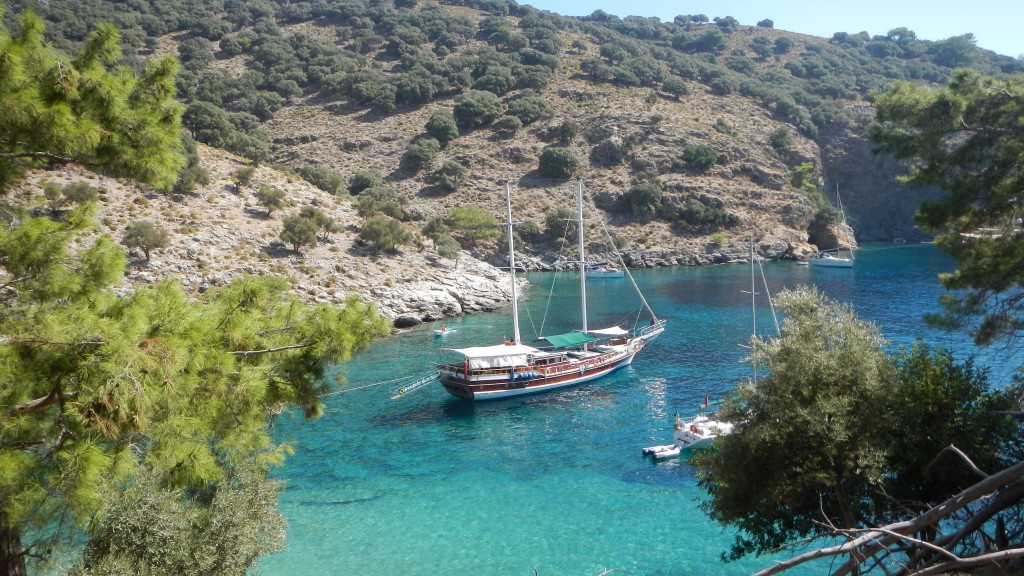 Yacht Cruise to the Islands of Gocek 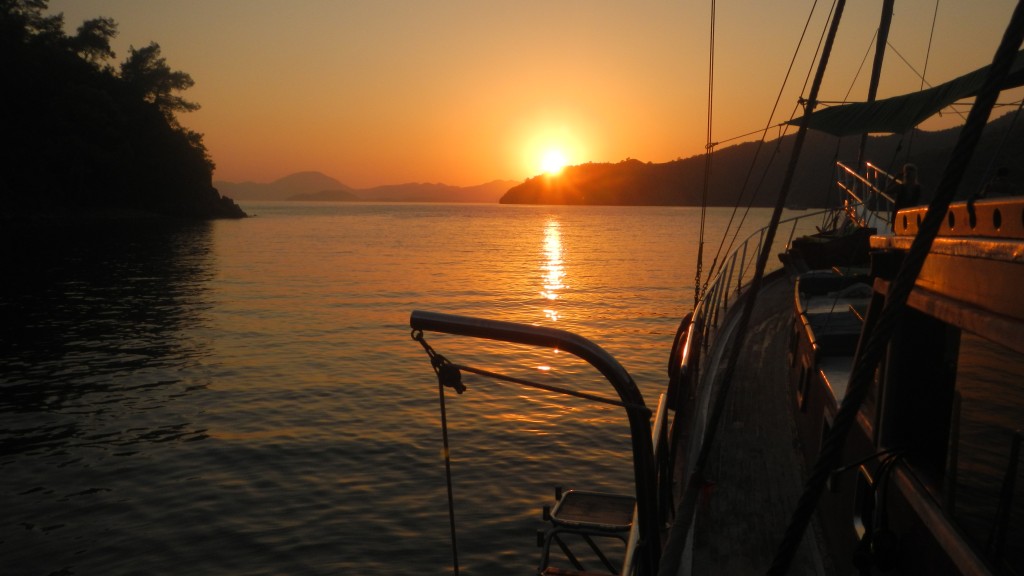 Sunset over the Mediterranean

Sadly, our yacht cruise came to an end and we headed inland to Pamukkale, Turkish for ‘cotton castle’, where there is the most extraordinary formation of travertine cascades and hot spring pools adorning the hillside. The ancient Greco-Roman and Byzantine city of Hierapolis was built on top of the white “castle”. During the Roman Empire period, Hierapolis and its site were a health centre. In those years, thousands of people used to come to the baths, of which there are more than 15, and they found their remedy in those baths. 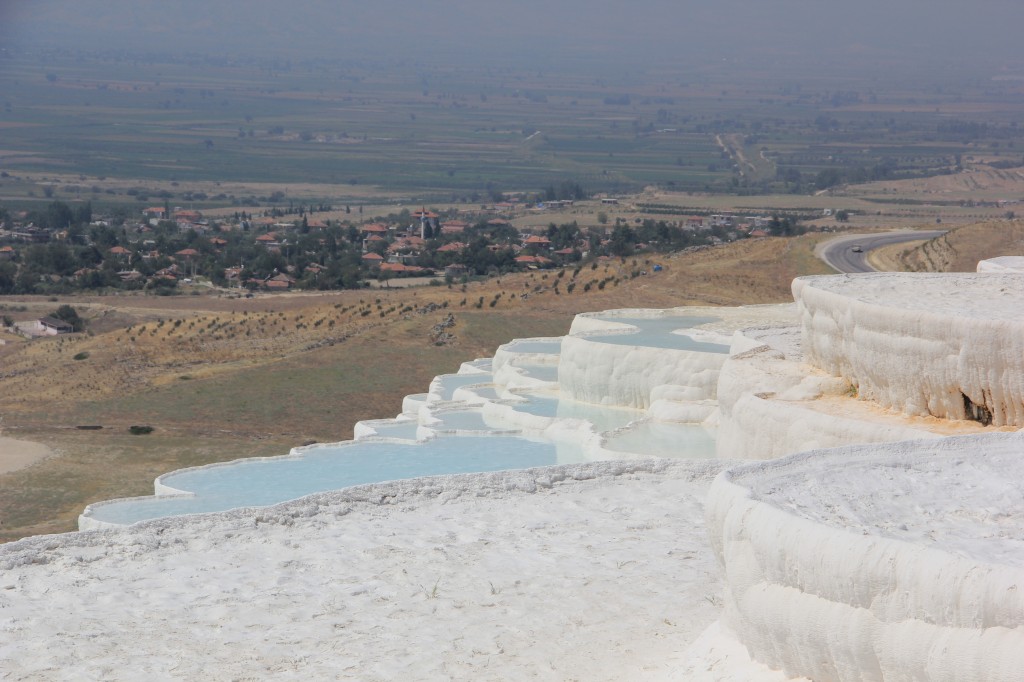 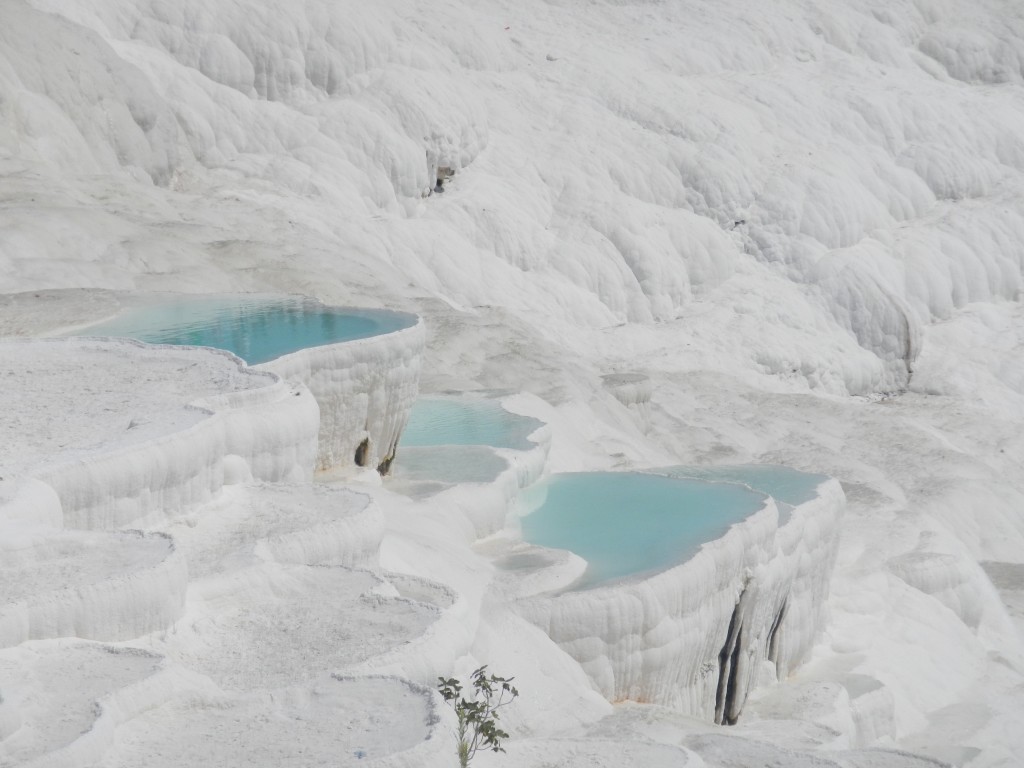 There is an extensive Necropolis from the northern to the eastern and southern sections of the old city. Most of the tombs have been excavated. This Necropolis is one of the best preserved in Turkey. Most of about the 1,200 tombs were constructed with local varieties of limestone. There is also an archaeological museum that displays many artefacts that came from towns in the valley surrounding Hierapolis . In addition to these, the museum includes some of the most beautiful examples of Bronze Age craft. 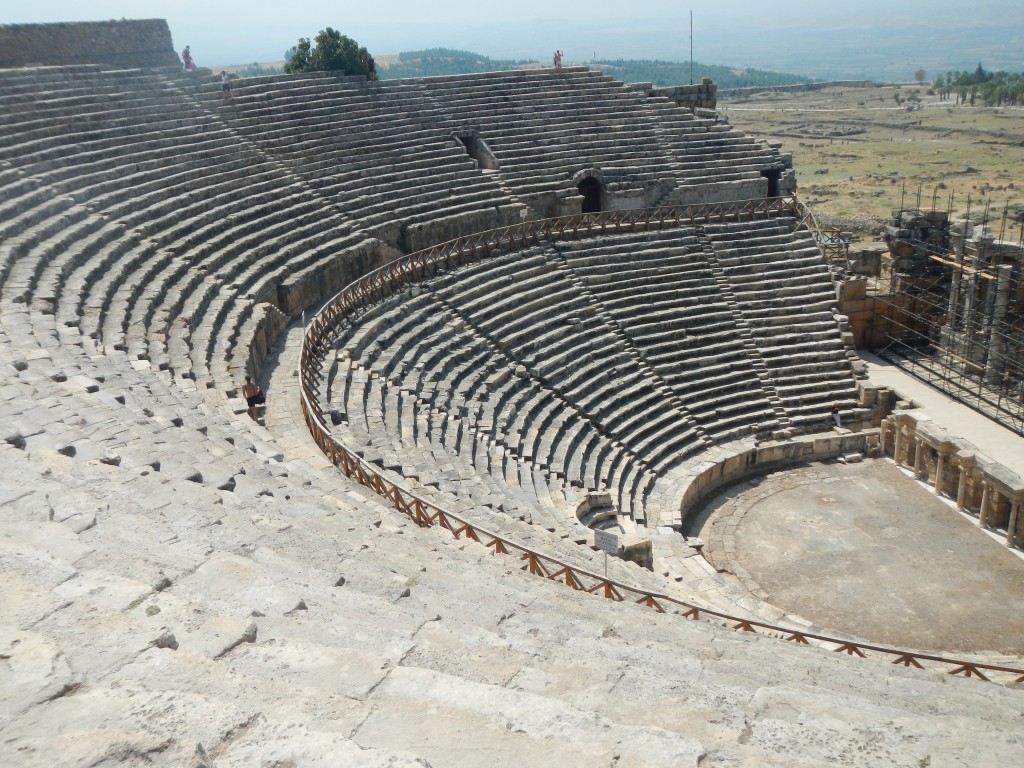 Pamukkale was an incredible sight – a bit like seeing a hillside covered in white snow on first glimpse. The long walk up the terraces of carbonate minerals, stopping to wade in the hot spring pools, was an amazing experience. The ruins of Hierapolis were also very worthwhile, even though by that stage of our tour we were a bit tired of seeing ancient ruins. The drive inland from the coastal area over the mountain ranges and through the lush farming areas in the rich plains was also rewarding. 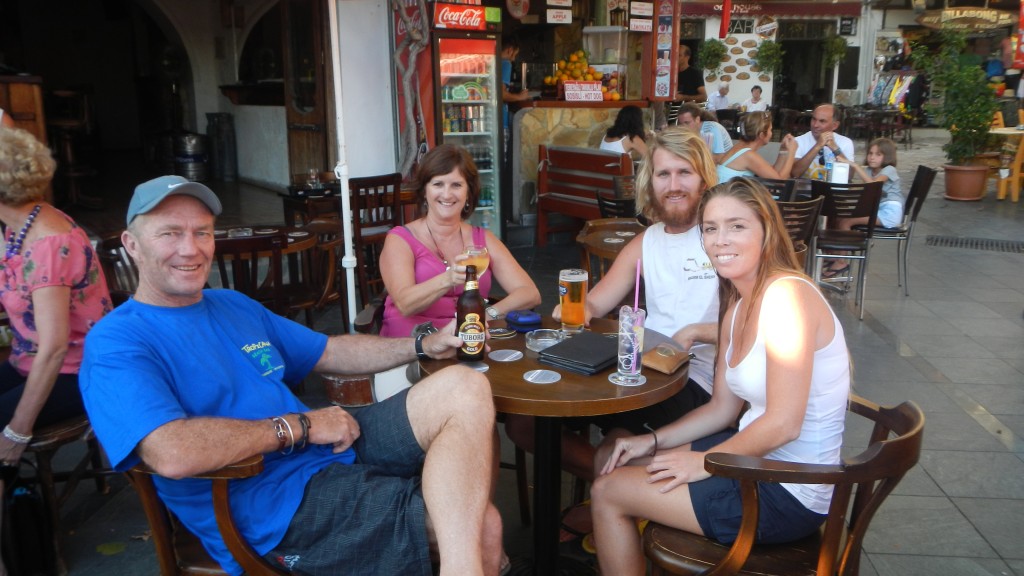 It was with hearts full of sorrow that we had to say güle güle (goodbye) to our travelling companions and leave this magical place where the East meets West. We boarded a flight in nearby Denizli and flew back to Istanbul to return home. For me it was one of the best holidays ever. Turkey certainly ticks all the boxes of the ideal travel destination – it has a lovely dry warm climate, beautiful rugged coastlines with the bluest water you will ever see, colossal historical sights second to none, delicious fresh food, easily navigable and modern roads, pristine beaches, great shopping and friendly people who in most cases understood English.

Spread the love
TravelTravel TurkeyTurkeyTurkey Holiday
By 50 Shades, November 20, 2013 Kathy was a 50 something year old when she started up this blog 6 years ago, but has since turned over another decade and is now in her early 60s. She is married with two adult children and lives on the Tweed Coast of New South Wales, Australia. Kathy enjoys living life to the fullest and loves to keep fit and active by maintaining a healthy diet and exercising regularly. Some of her interests include reading, photography, travelling, cooking and blogging! Kathy works part-time as a freelance writer but her real passion is travelling and photographing brilliant destinations both within Australia and overseas and writing about it.