Vietnam: The Star of The East 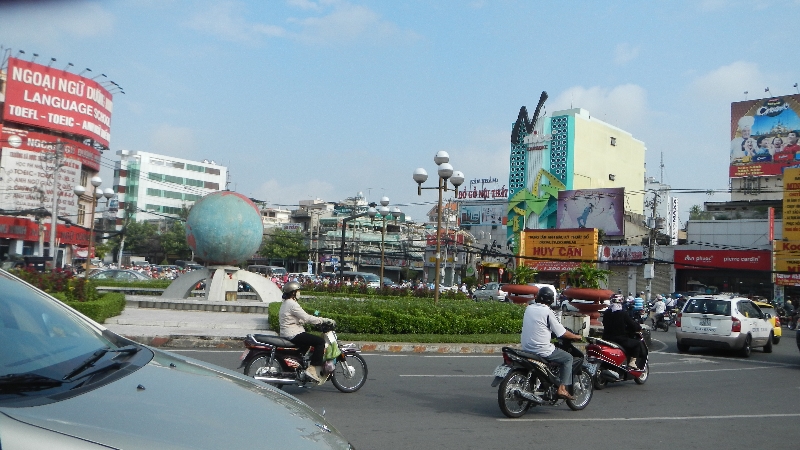 A few years ago my husband and I went to Vietnam for ten days after hearing from several people how great it was as a holiday destination. If you can see past the over-populated cities full of millions upon millions of Vietnamese going from A to B on their motorised scooters like a colony of ants; and you can see past some of the poverty and the cramped and unsanitary living conditions of the people; you will love this place!

Vietnam has some of the best food I’ve ever tasted and my husband can vouch for their beer which he said “was a tasty drop”. The accommodation in cute little boutique style hotels is not only cheap (around $40 per night), but clean, modern and well equipped. The only complaint I would have is that the mattresses are extremely thin and hard.

The Vietnamese people are delightful. They go out of their way to be friendly and hospitable and go beyond the call of duty. Some of the Vietnamese women are so beautiful and the children ever so cute! 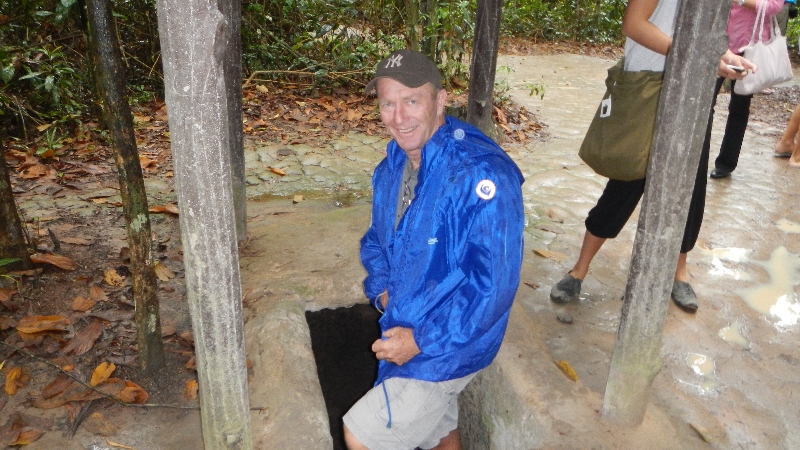 We bundled a lot of the tourist attractions into our ten days.  In Ho Chi Minh City (formerly known as Saigon) we explored the thriving city and visited the markets and the War Museum. We did a half day tour of the Cu Chi Tunnels. The tunnels were used by Viet Cong guerrillas as hiding spots during combat in the Vietnam War, as well as serving as communication and supply routes, hospitals, food and weapon caches and living quarters for numerous guerrilla fighters. 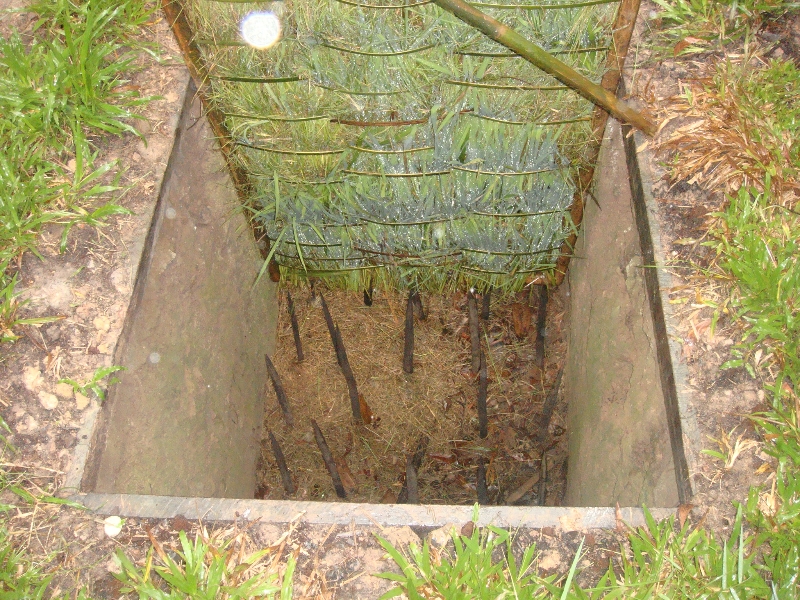 A Viet Cong ‘booby trap’ used during the Vietnam War

We did a full day tour of the Mekong River area. The Mekong Delta is by far Vietnam’s most productive region in agriculture and aquaculture. Life in the Mekong Delta revolves much around the river, and many of the villages are often accessible by rivers and canals rather than by road. We visited a coconut farm where they extracted the oil from the coconuts to produce goods such as soap, moisturizers and sweets. There are some very good floating markets where you buy almost anything from fresh fruit and vegetables to silk scarves. 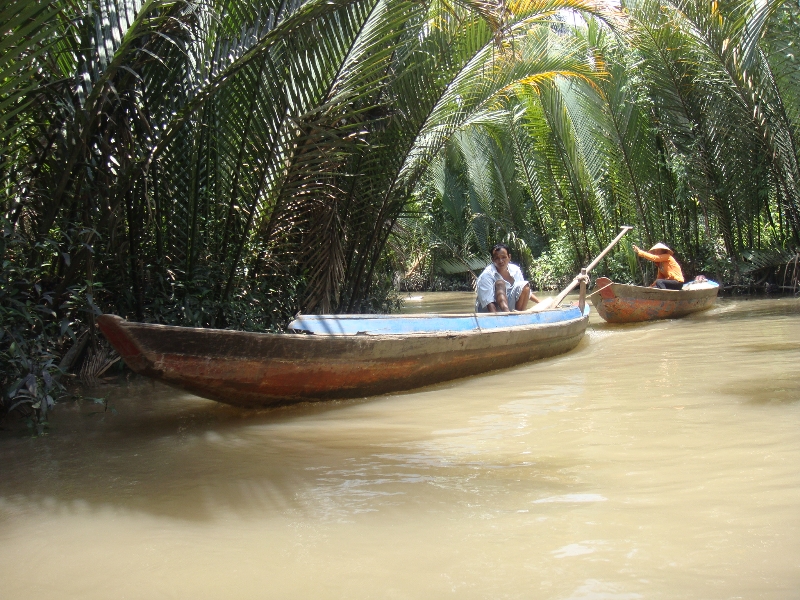 Villagers in their boats in the Mekong Delta 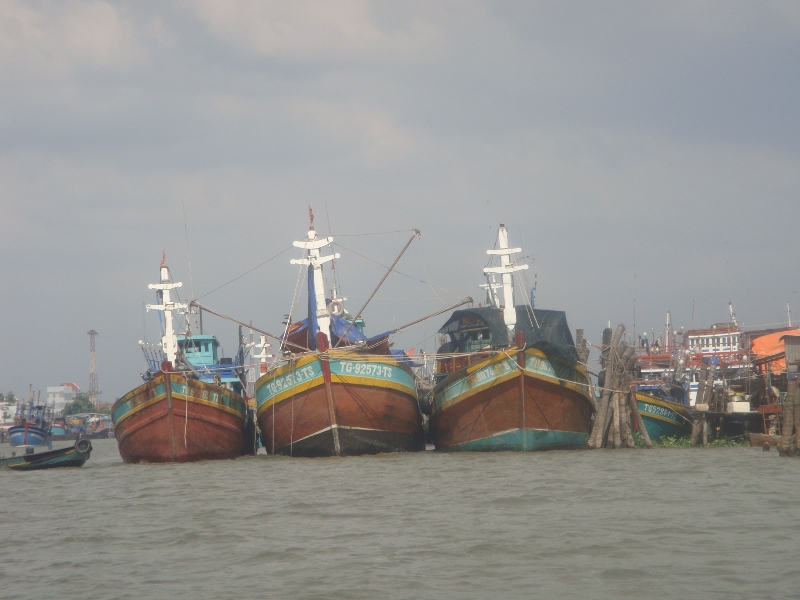 Boats on the Mekong River 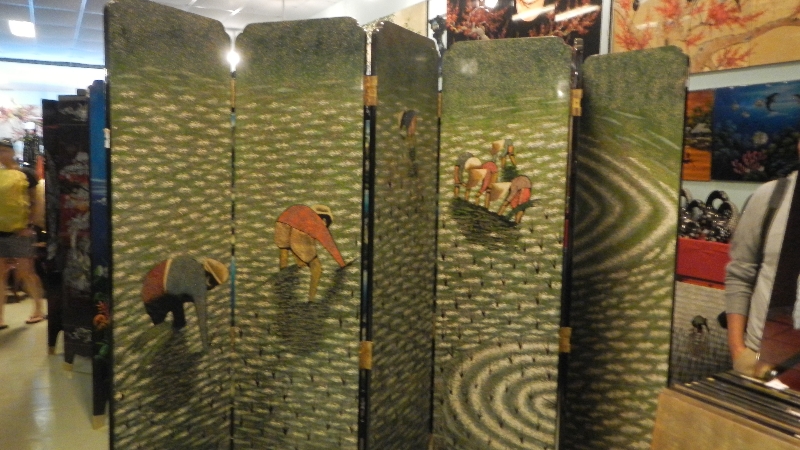 Lacquered Screen made at the Vietnamese Disabled Workshop

Along the way we stopped at a disabled people workshop where they were making this incredible lacquer ware. Some of the work was painstakingly created out of tiny pieces of mother-of-pearl or egg shells – quite beautiful. 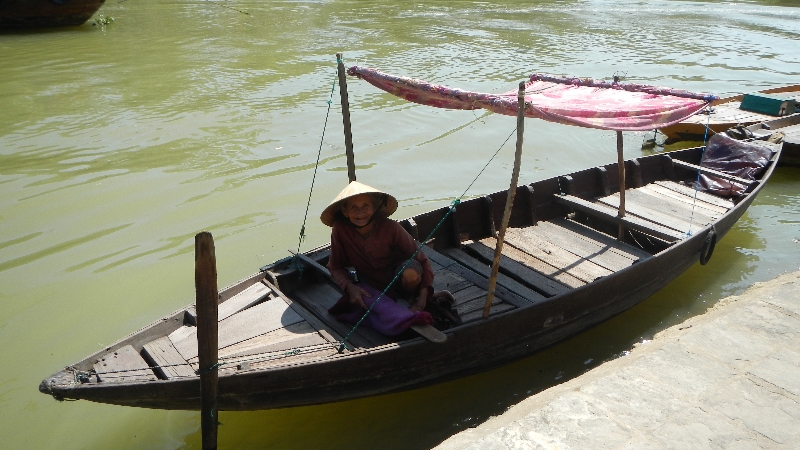 Old Vietnamese lady on the Hoi An River

We visited the charming beach resort town of Hoi An where we spent a few days enjoying the pristine white sand and aquamarine water. Hoi An Ancient Town is an exceptionally well-preserved example of a South-East Asian trading port dating from the 15th to the 19th century. They have hundreds of tailors that can whip up anything you desire out of the most beautiful silk fabrics in a variety of colours and patterns. They also have leather shoemakers who can make you a custom-made pair of soft leather shoes in a day. Like everything in Vietnam, the prices are very reasonable. 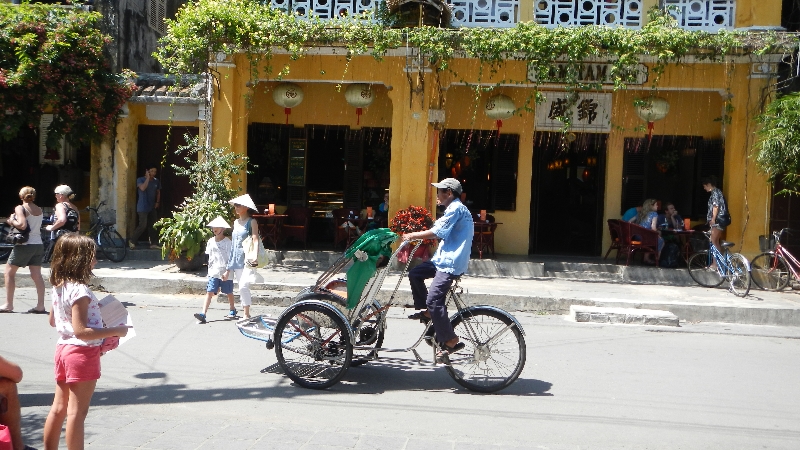 French influence in the buildings in the town of Hoi An 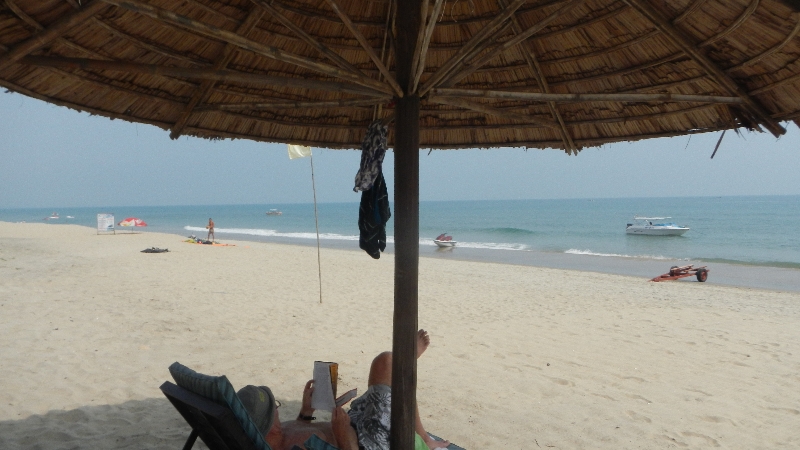 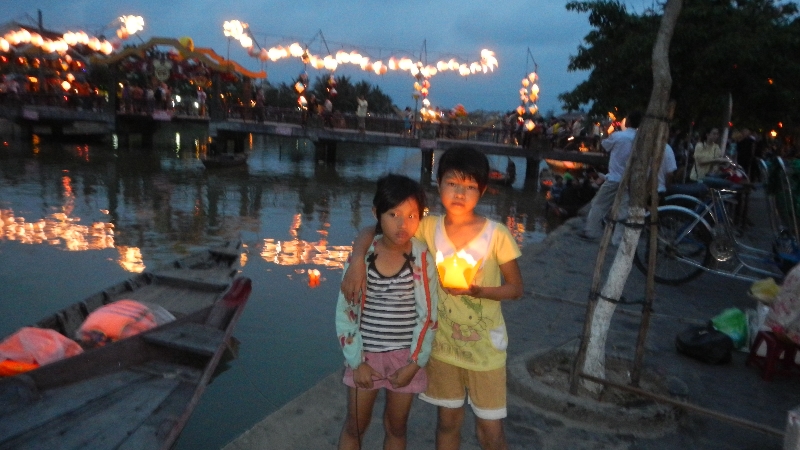 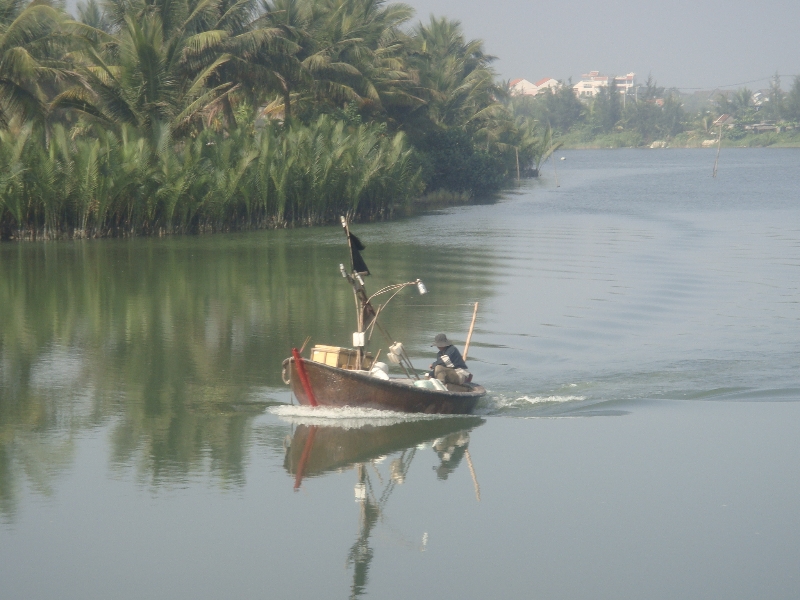 Fisherman on the Hoi An River

The last leg of our stay was spent in the northern city of Hanoi.  Here we explored this vast heavily populated city on the banks of the Red River and walked around the central lake and over the Huc Bridge to Quan Thanh Temple. We set off around Hanoi’s old quarter, the thousand-year-old district known as the “36 Streets”. Each street once belonged to a separate merchant guild and is still pretty specialised – a street of shoes, of herbal medicines, of fake Ray-Bans.  Shopper’s heaven really! 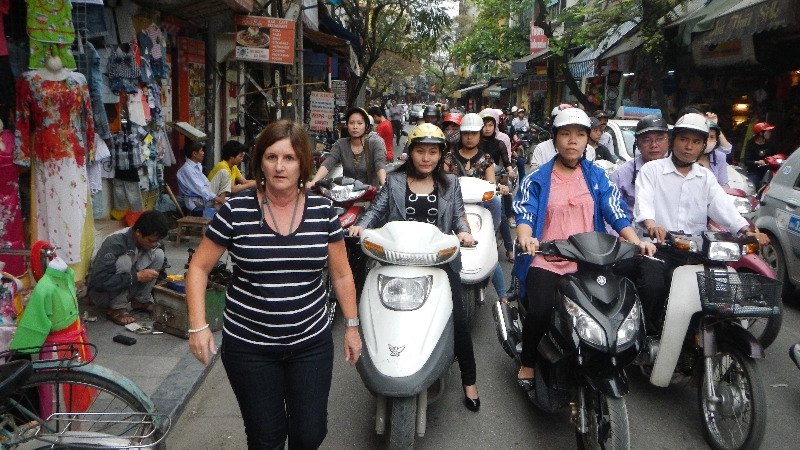 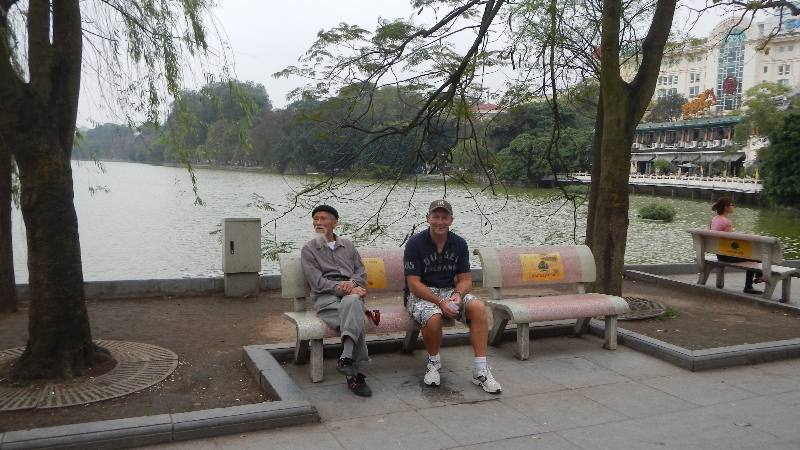 Lake in the centre of Hanoi 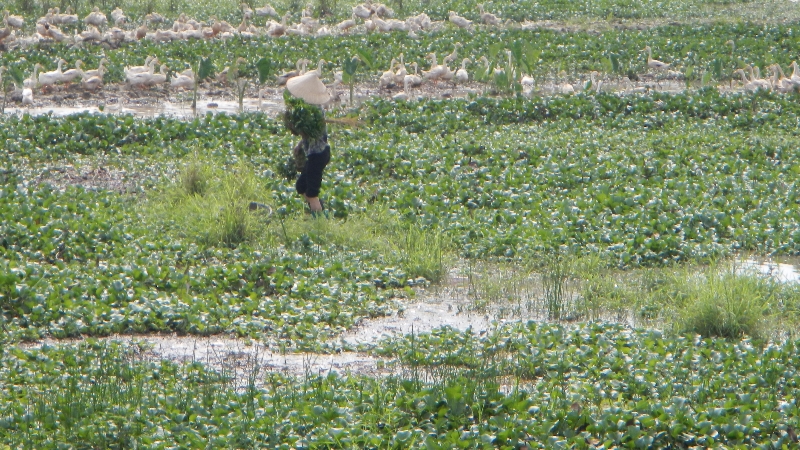 We drove four hours out to Ha Long Bay and boarded a luxury cruise boat (Vietnamese junk style) for a two night cruise around this magical area in the Gulf of Tonkin. The bay consists of a dense cluster of over 1969 limestone monolithic islands each topped with thick jungle vegetation, rising spectacularly from the ocean. Several of the islands are hollow, with enormous caves.  We spent two days exploring some of these islands and caves, including a walk up 400 stairs to a very scenic lookout on Tip Top Island. The bay is heart-stoppingly beautiful, especially at dawn and dusk, when the shadows on the forested limestone towers turn it into dreamland. As part of the cruise we visited a completely self sufficient floating village complete with their own school and a fish farm. 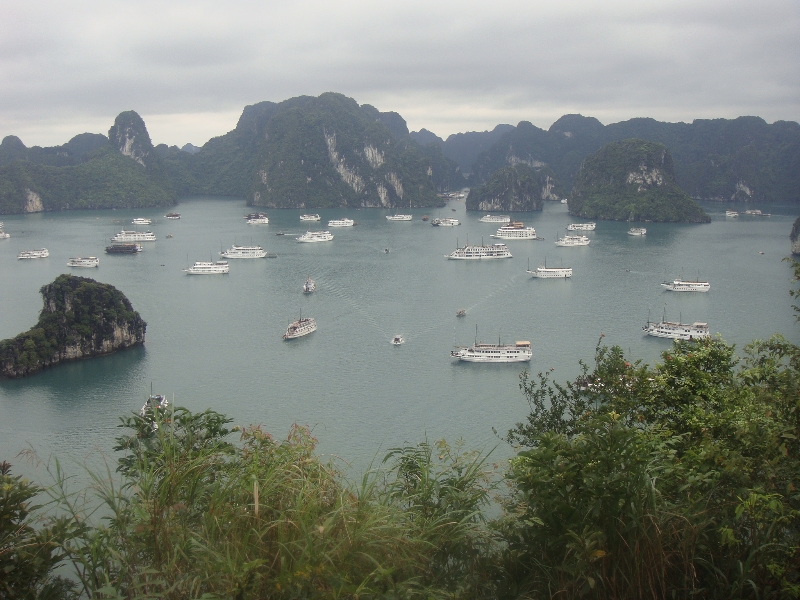 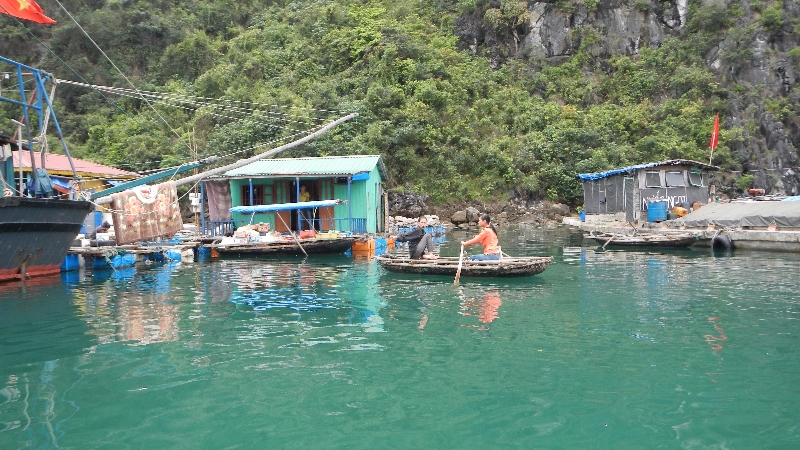 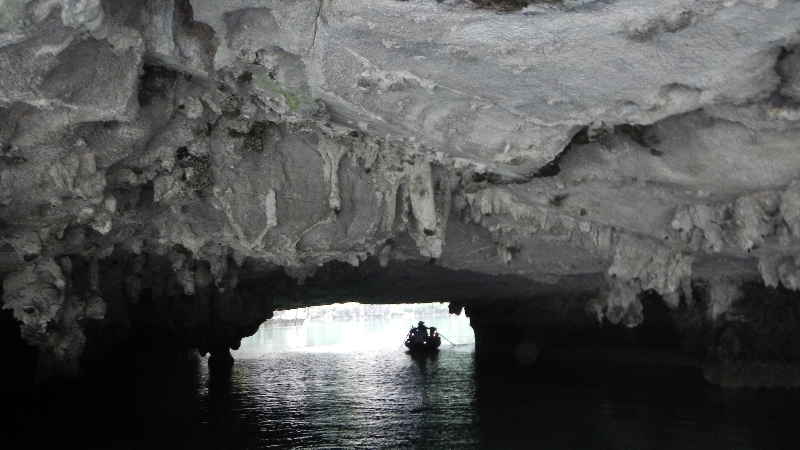 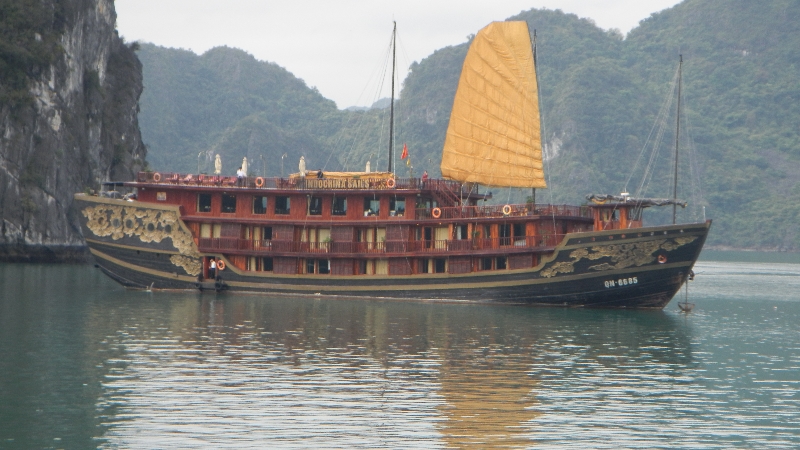 Vietnam is an exciting place, with much of the charm of Thailand but less problematic and tawdry. Its terrible history has, so far, kept it mostly unspoiled by tourism and, goodness knows, is compelling in itself. If you are looking for a great holiday on a budget with cheap tasty food, good shopping and beautiful beach resorts, then Vietnam is a must see!

Here’s some interesting facts about Vietnam by KarolinaPatryk

Spread the love
Star of The EastTravel-VietnamVietnamVietnam Holiday
By 50 Shades, July 10, 2013 Kathy was a 50 something year old when she started up this blog 6 years ago, but has since turned over another decade and is now in her early 60s. She is married with two adult children and lives on the Tweed Coast of New South Wales, Australia. Kathy enjoys living life to the fullest and loves to keep fit and active by maintaining a healthy diet and exercising regularly. Some of her interests include reading, photography, travelling, cooking and blogging! Kathy works part-time as a freelance writer but her real passion is travelling and photographing brilliant destinations both within Australia and overseas and writing about it.